The letter "Z" and a Birding Adventure

Zoodikers! The letter Z reins today.  Next week, the 15th round of ABC Wednesday will begin at the letter A.  It was 7 years ago that Denise Nesbitt had the zoetic idea to start a meme that features a new letter of the alphabet each week, and I am very grateful to her for putting this idea with a ton of zizz into action.  Perhaps, you will consider joining. The potential for creativity and fun is almost limitless.  Here's the link to learn more about it.

I am also linking up today to a couple of bird memes.  Stewart's Wild Bird Wednesday and Anni's I'd Rather B Birdin' are zazzy ways to learn about birds from around the world and I appreciate the work done by both hosts to bring bird lovers together.

I found some "unusual words that begin with z" at this site.

Yesterday was a very unusual day in that I didn't take even one picture of Bill or Black Jack.  Zoodikers!  How could that have happened?  They bring a zoetic quality to my life that I'll try to illustrate with this story.  A few days ago, in Stanley Park, Bill and I talked about the letter Z.  He had just taken Black Jack to check out a favourite zuche that had retained its appeal in spite of a skunking from that very stump only a couple of years earlier. 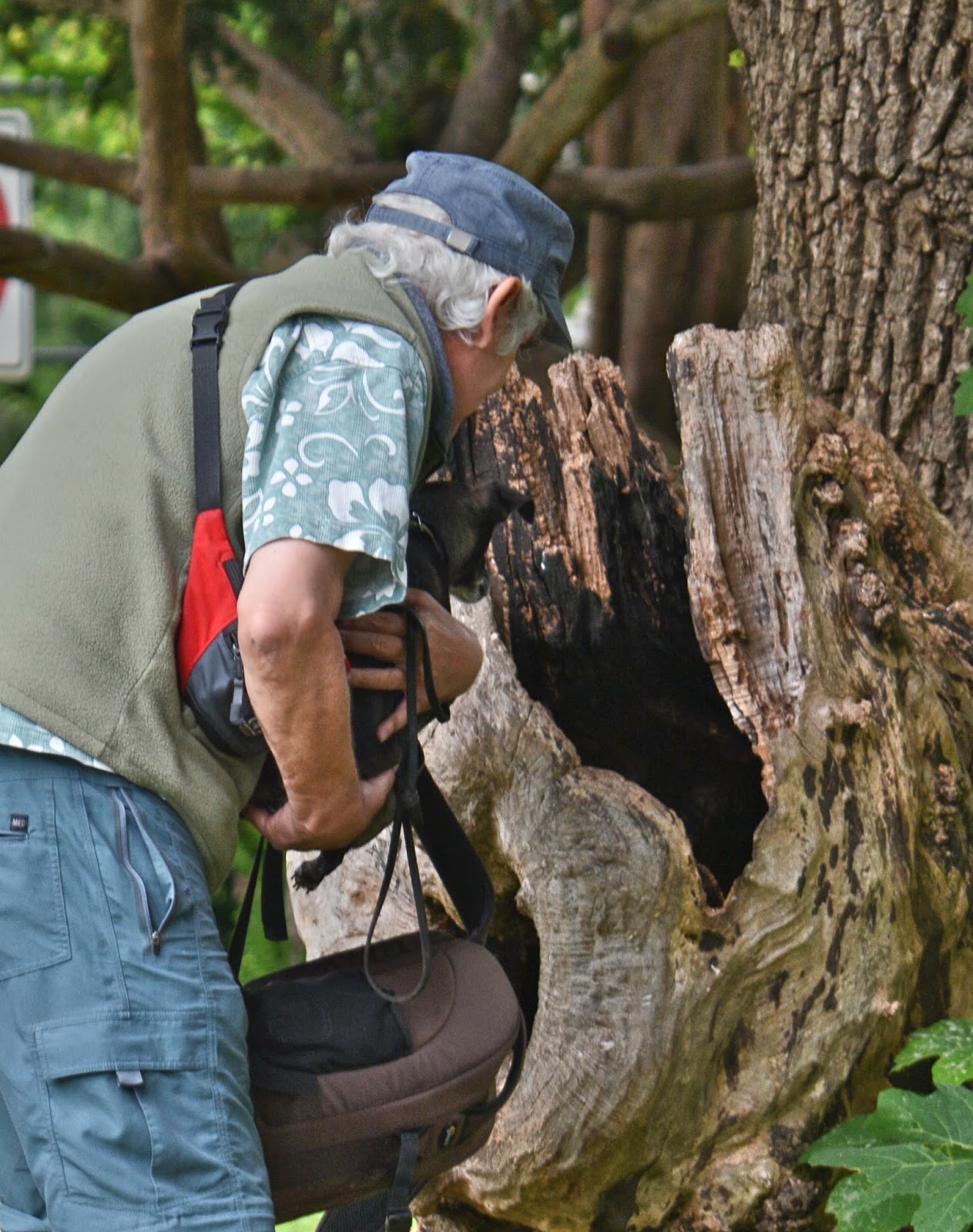 A short distance from the zuche, Bill spotted this branch, and commented that it might seem obscure but he thought he saw the letter Z in it.  I saw it too!  Zoodikers!  More words would be zeroable.  Bill and Black Jack add zizz to my life that wouldn't be there without them. 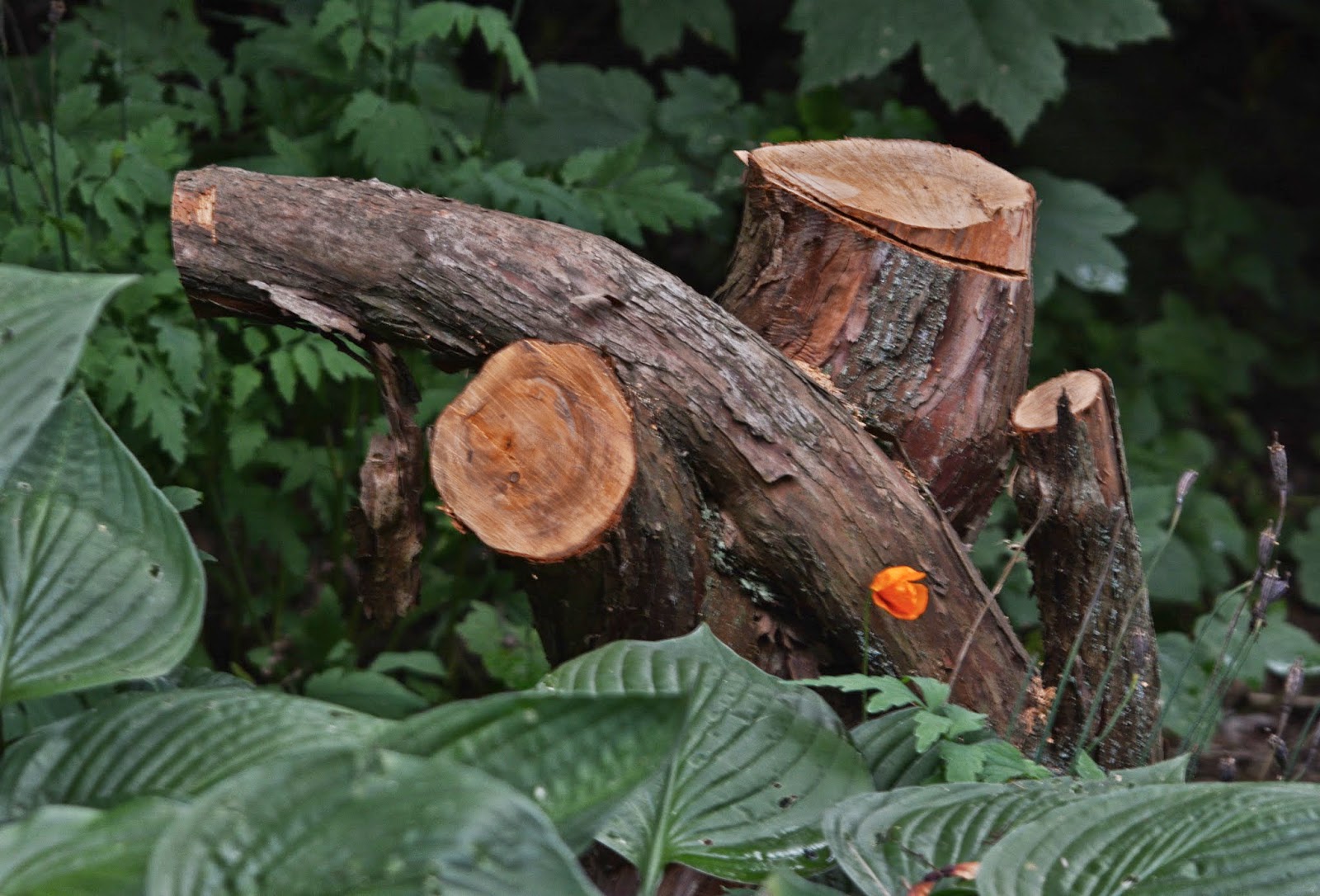 Yesterday, we returned to Stanley Park, this time with the specific goal to understand my new Nikon D7100 camera a bit better.  I played around between "manual" and "aperture" priority, hoping to get clearer shots of birds in action.  Almost all of the nests in the heronry are now empty.  Just a few youngsters are waiting to take their first flight. 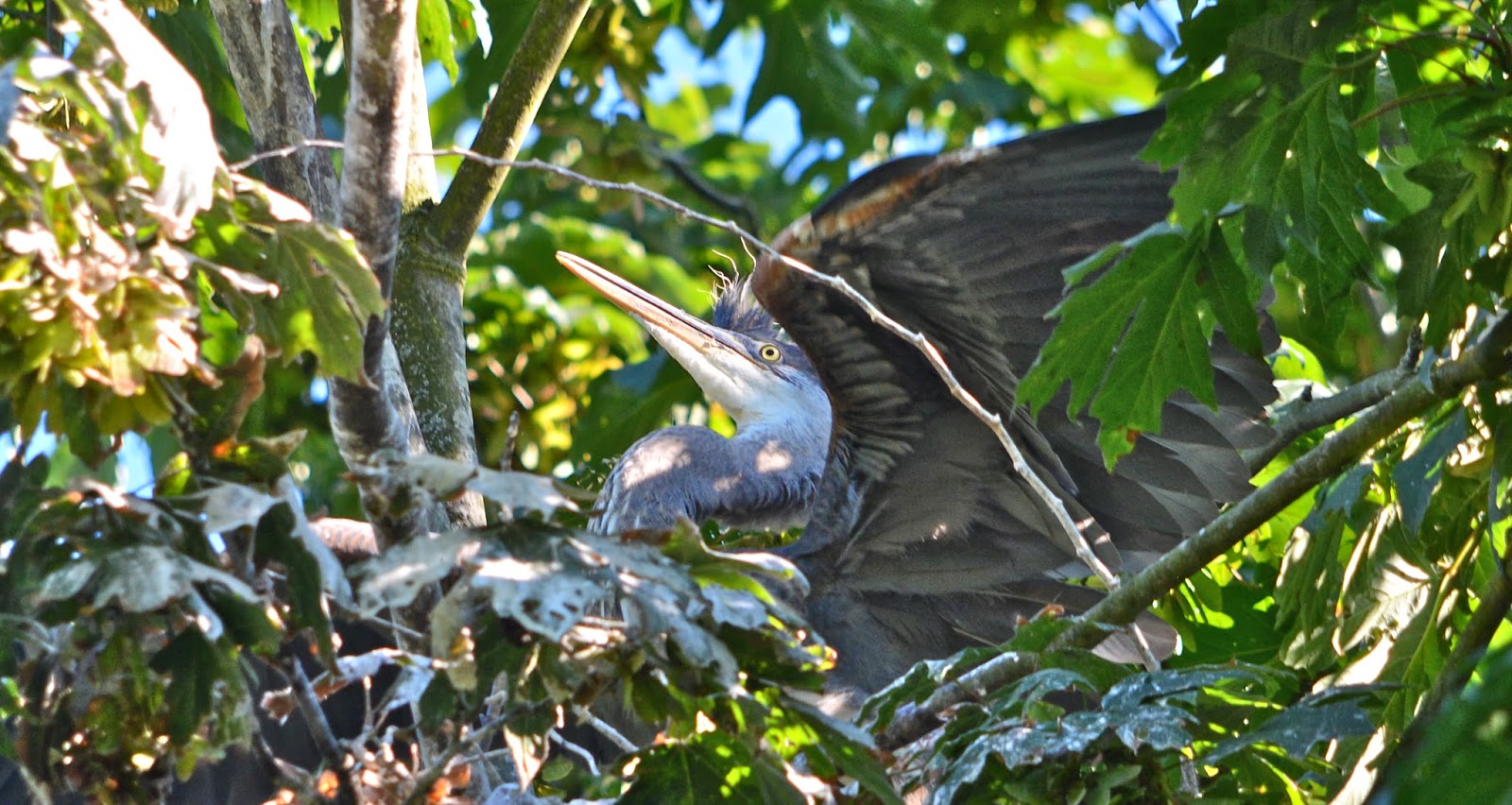 Most of my shots were too dark so I've done some shadow-reduction in many of them, but I made a bit of progress in at least being able to track with the autofocus. 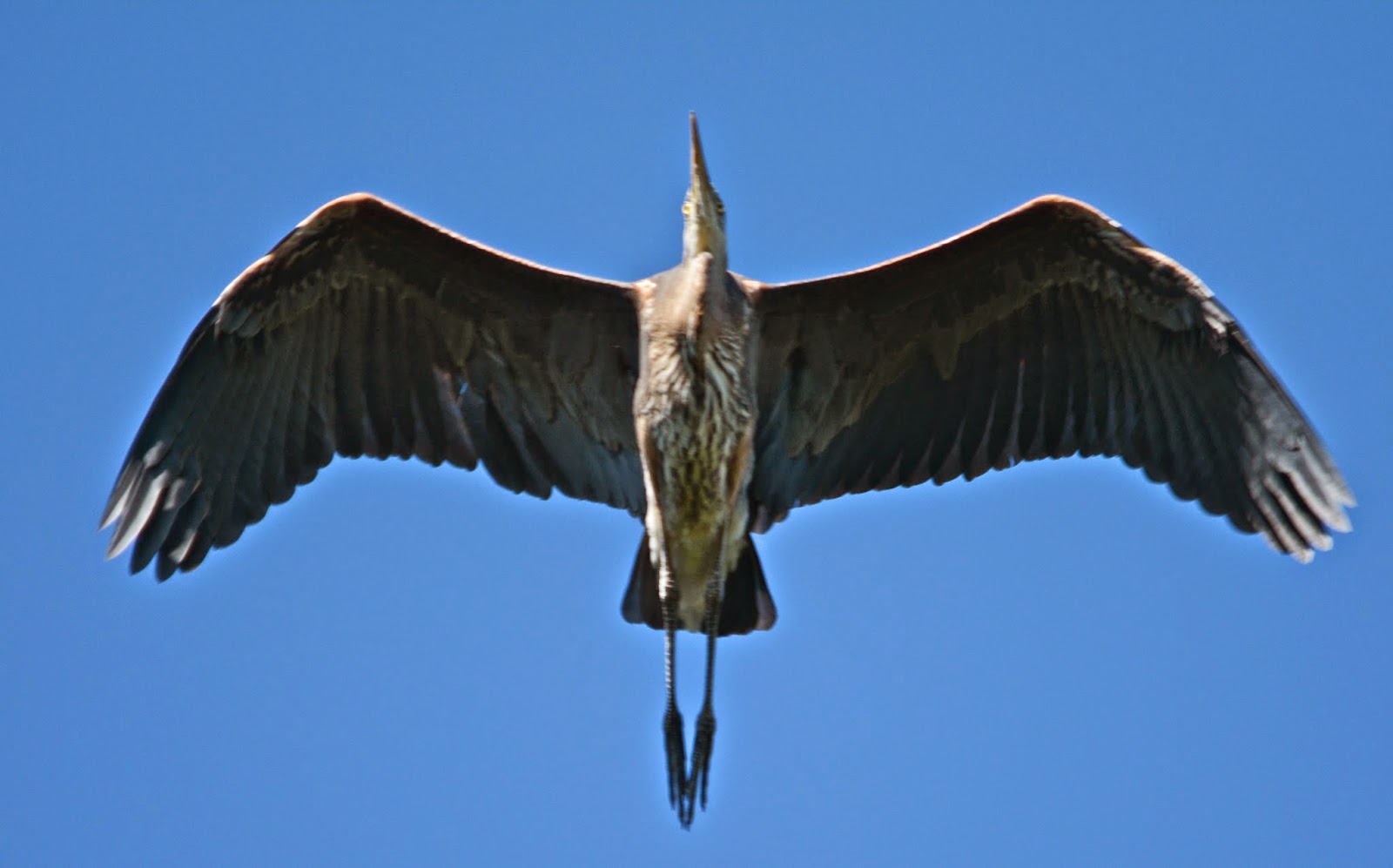 If there is anyone out there in birdland with the same camera and some advice for birds-in-flight shots (I do know I should use a tripod but that isn't going to happen for now), I would accept "best settings to use" advice with much appreciation.  Not-a' word would be zeroable. 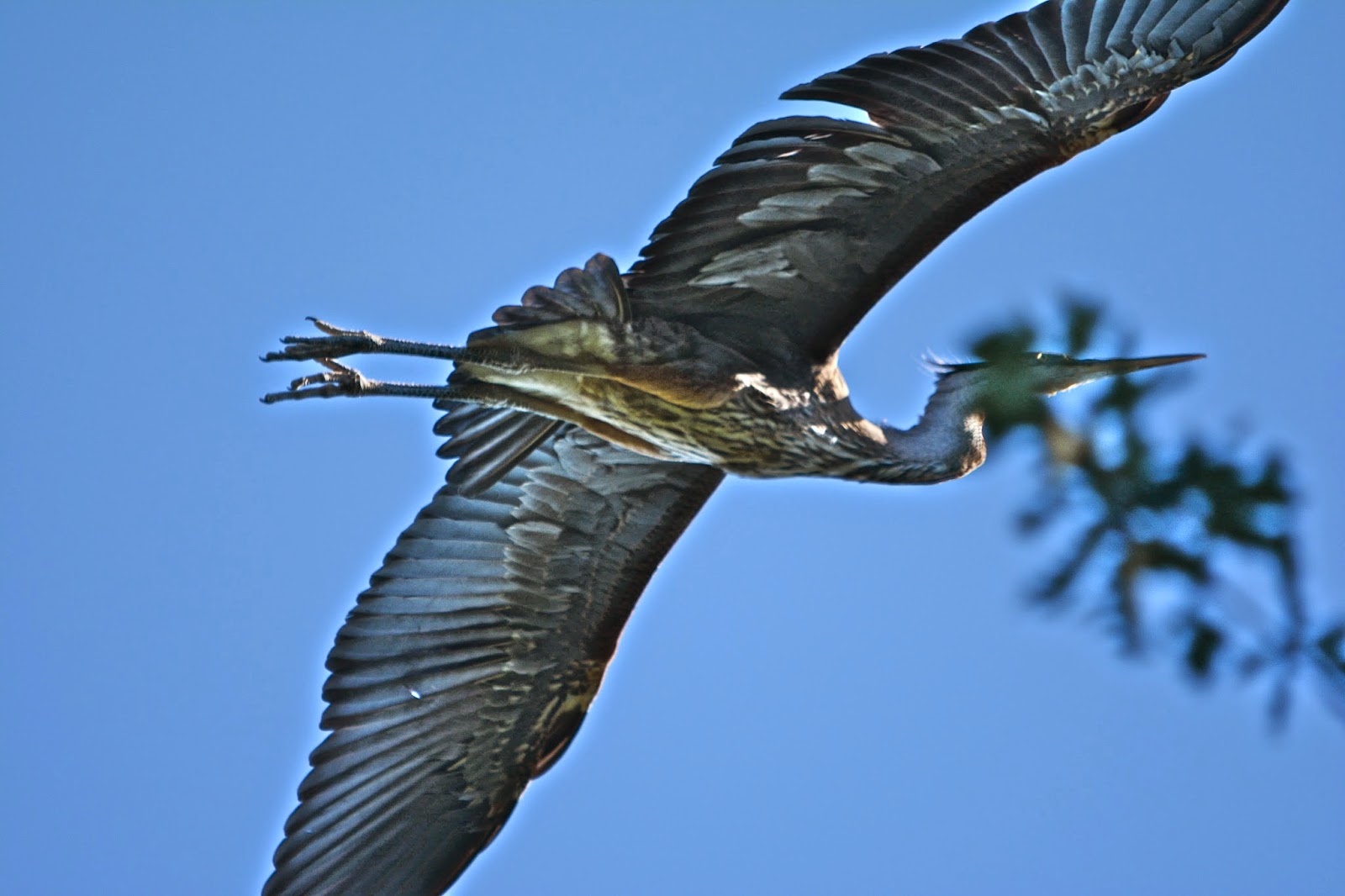 I considered it somewhat miraculous when my camera caught this teeny-weeny spec in the sky and confirmed, after much cropping, that it was a zoetic swallow. 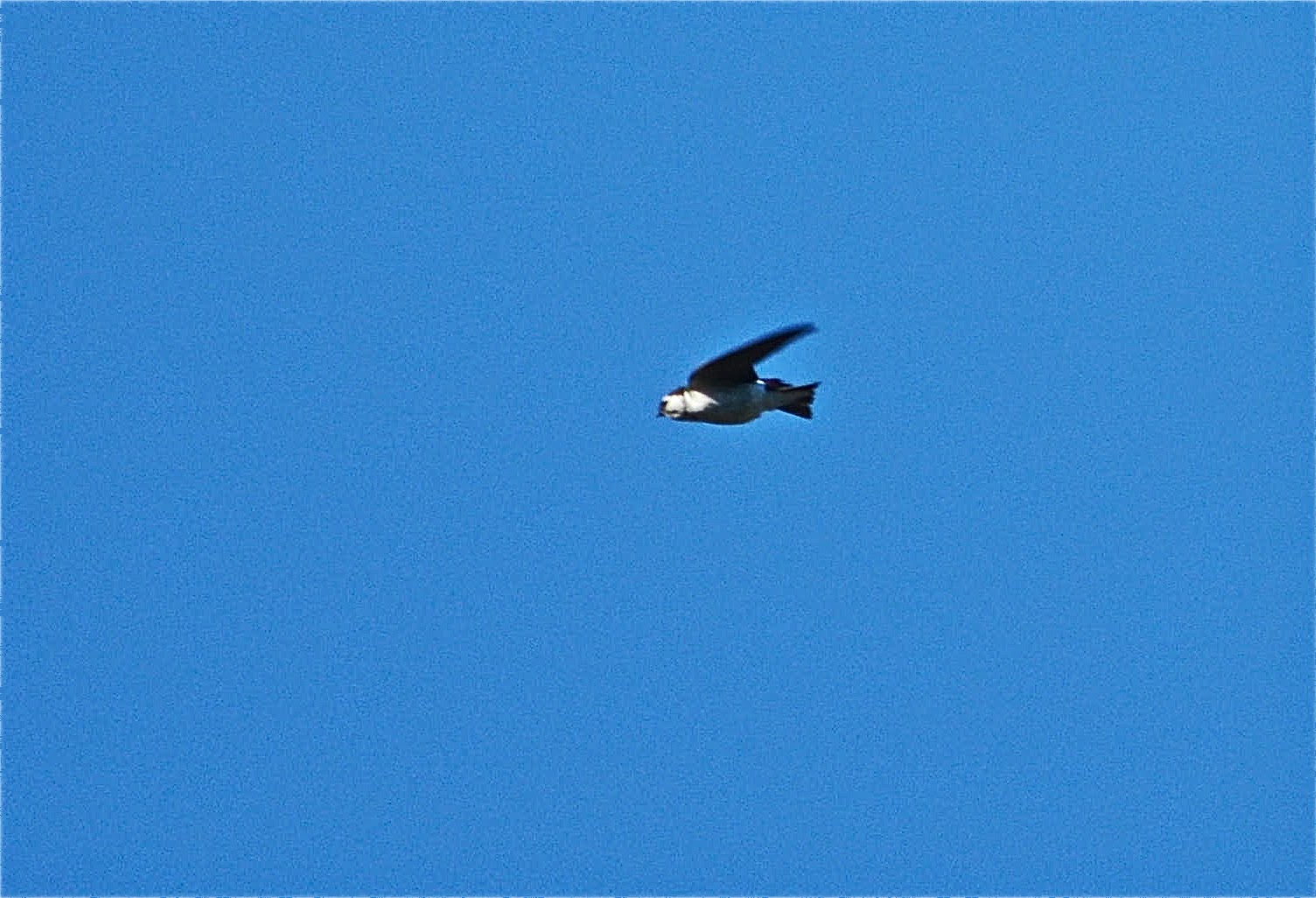 I tried some still shots as well (mostly in manual).  I'm not sure of the distinction between young and mature blue herons, but am wondering if this one was recently fledged.  I've never seen the wings droop quite like that.  I thought I saw a sad woman wrapping her skirts.. 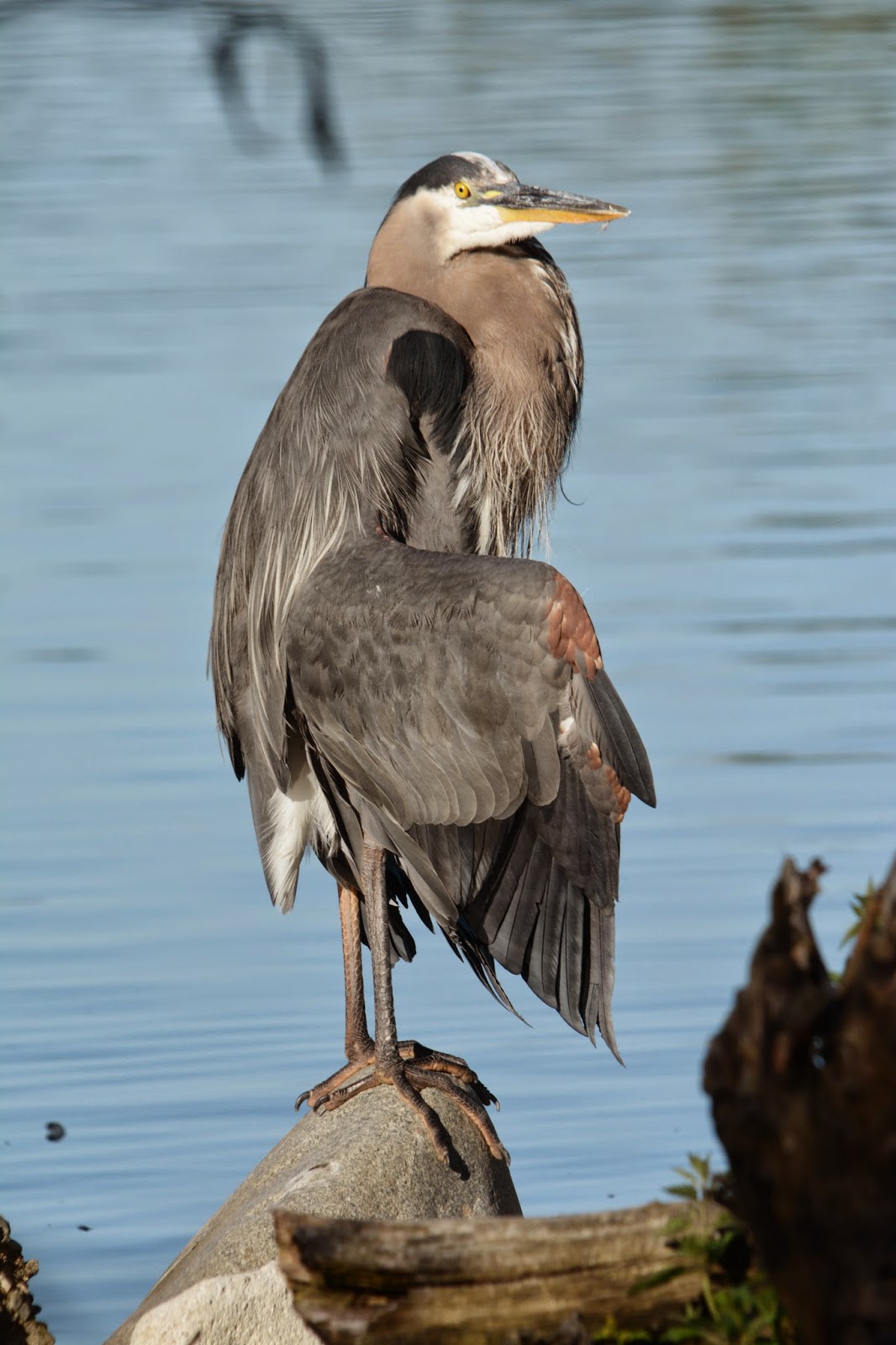 about her, and, what a stunningly gorgeous skirt it was! 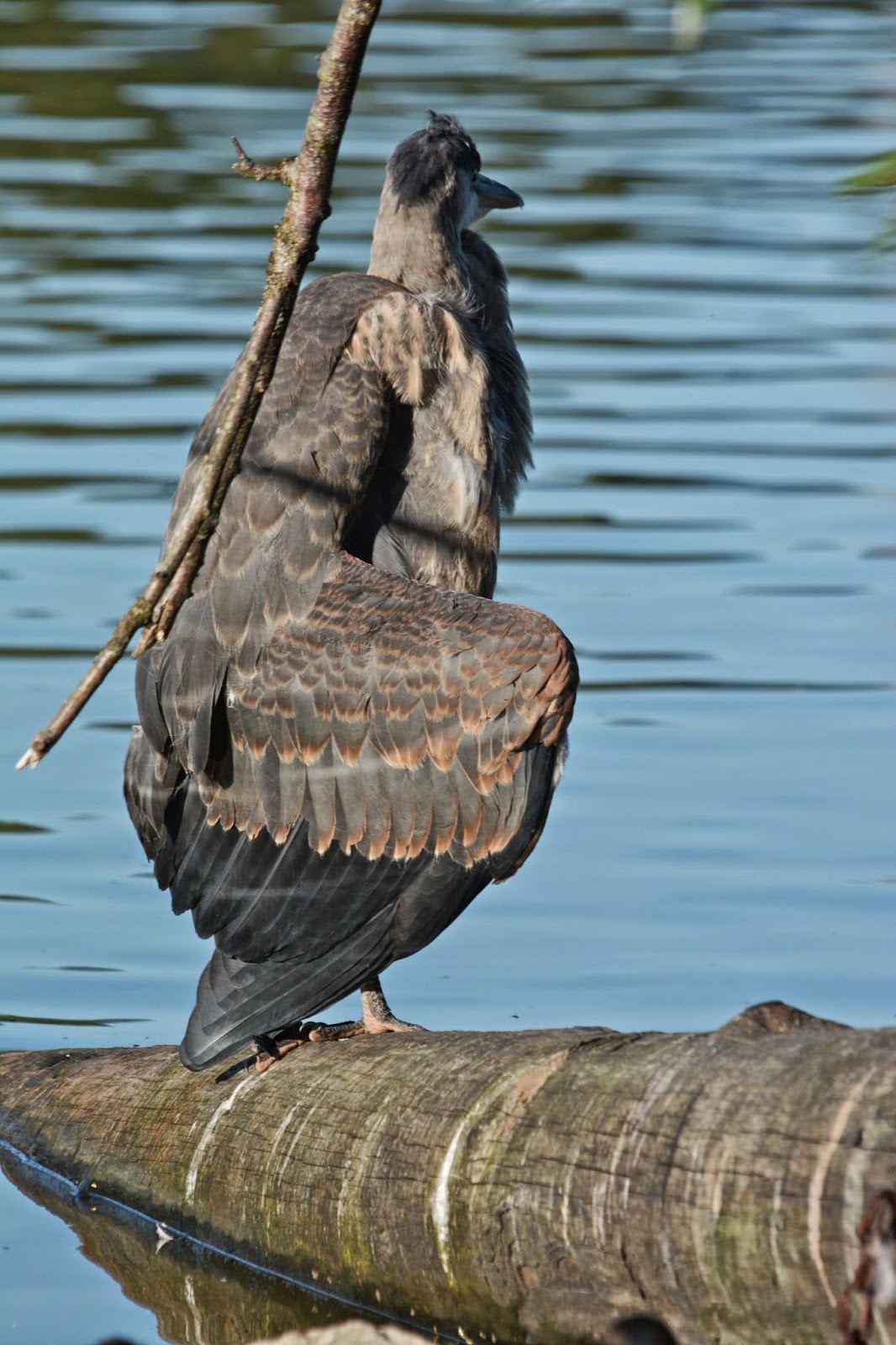 It has been a good year for Canada Goose survival.  It seems almost everywhere we go, there are large numbers of them traveling determinedly to I'm not sure where. 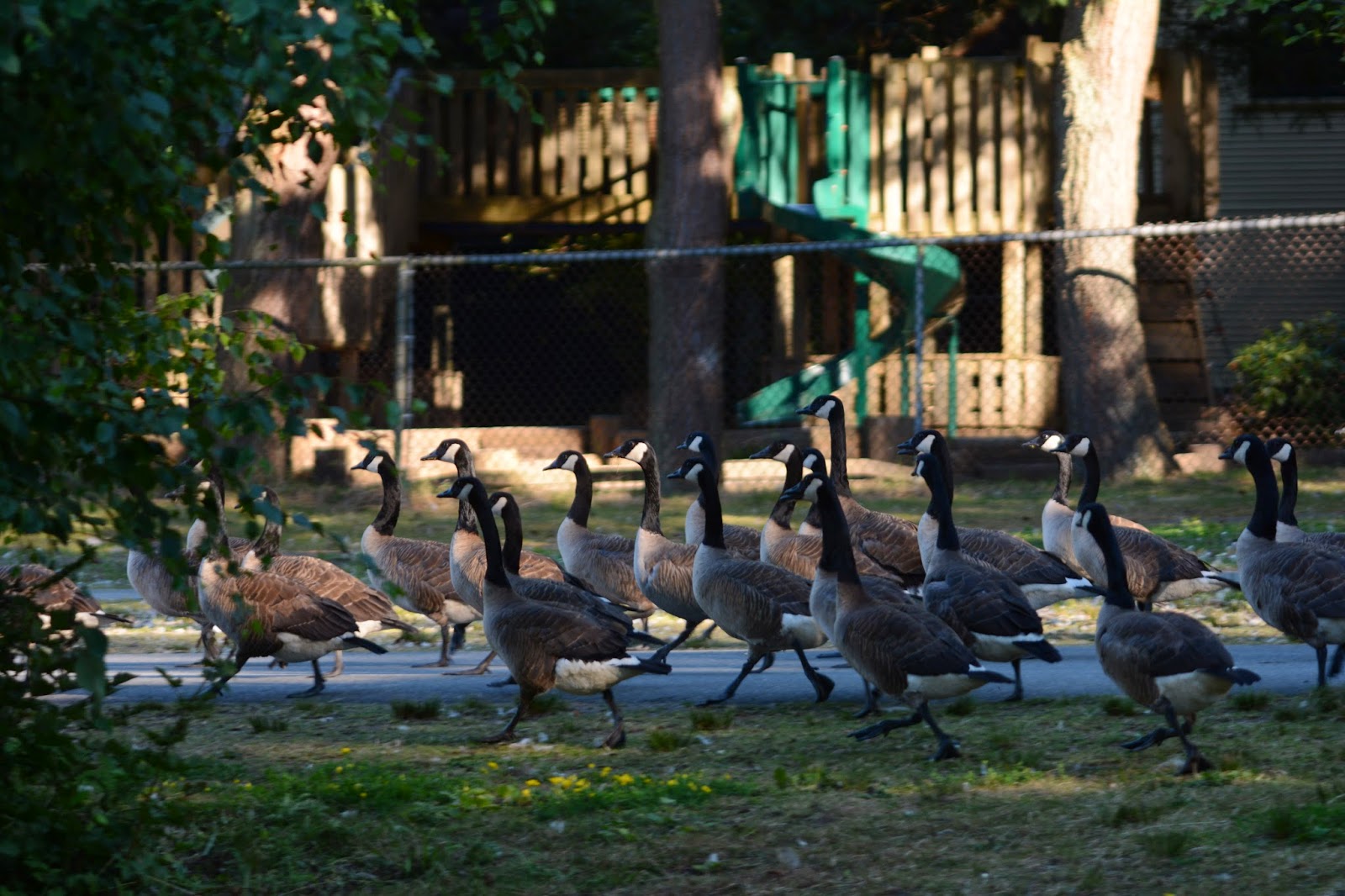 They lined up along Lost Lagoon, 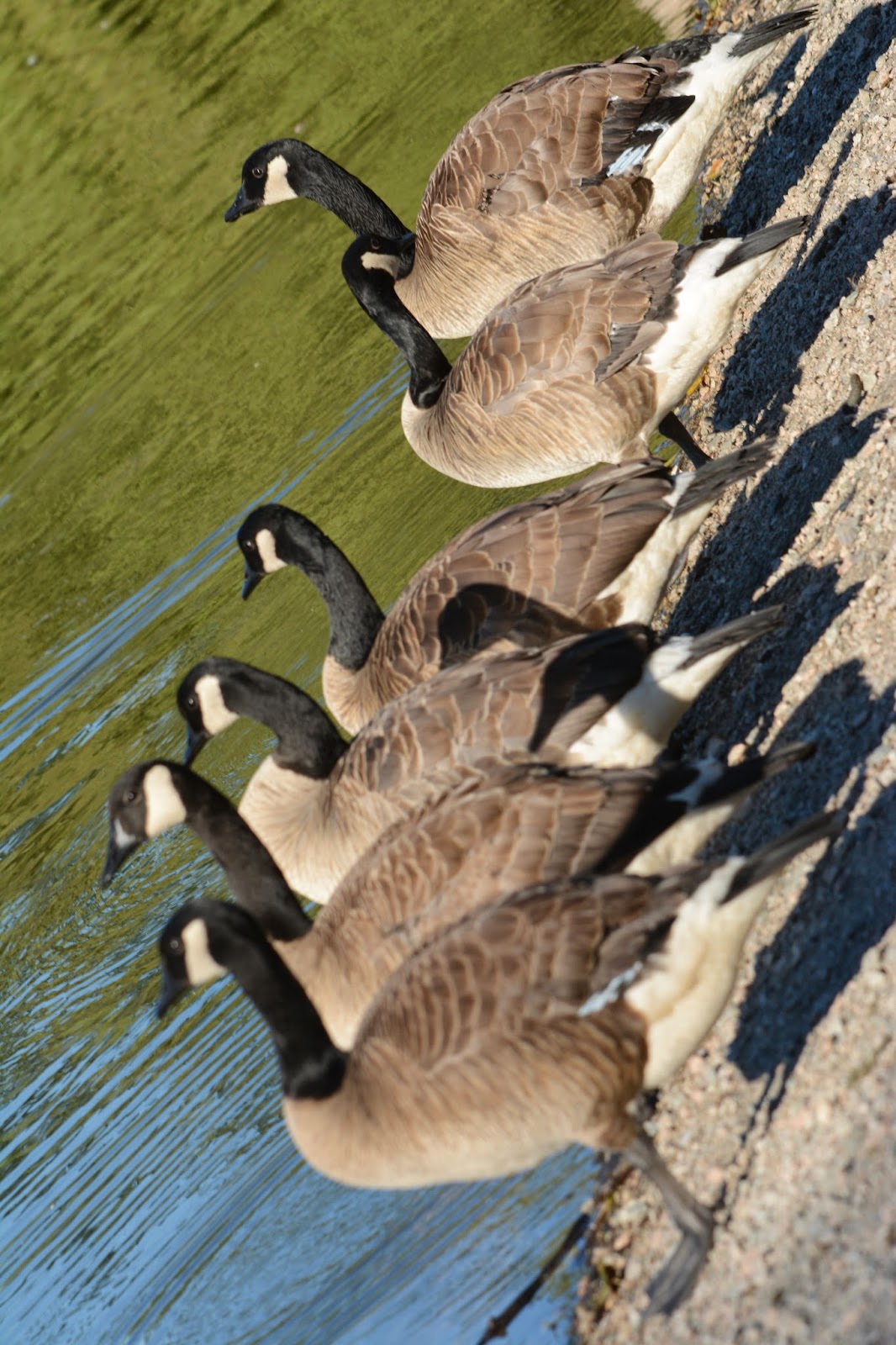 along with several pigeons. This one, I thought, was an especially photogenic one. 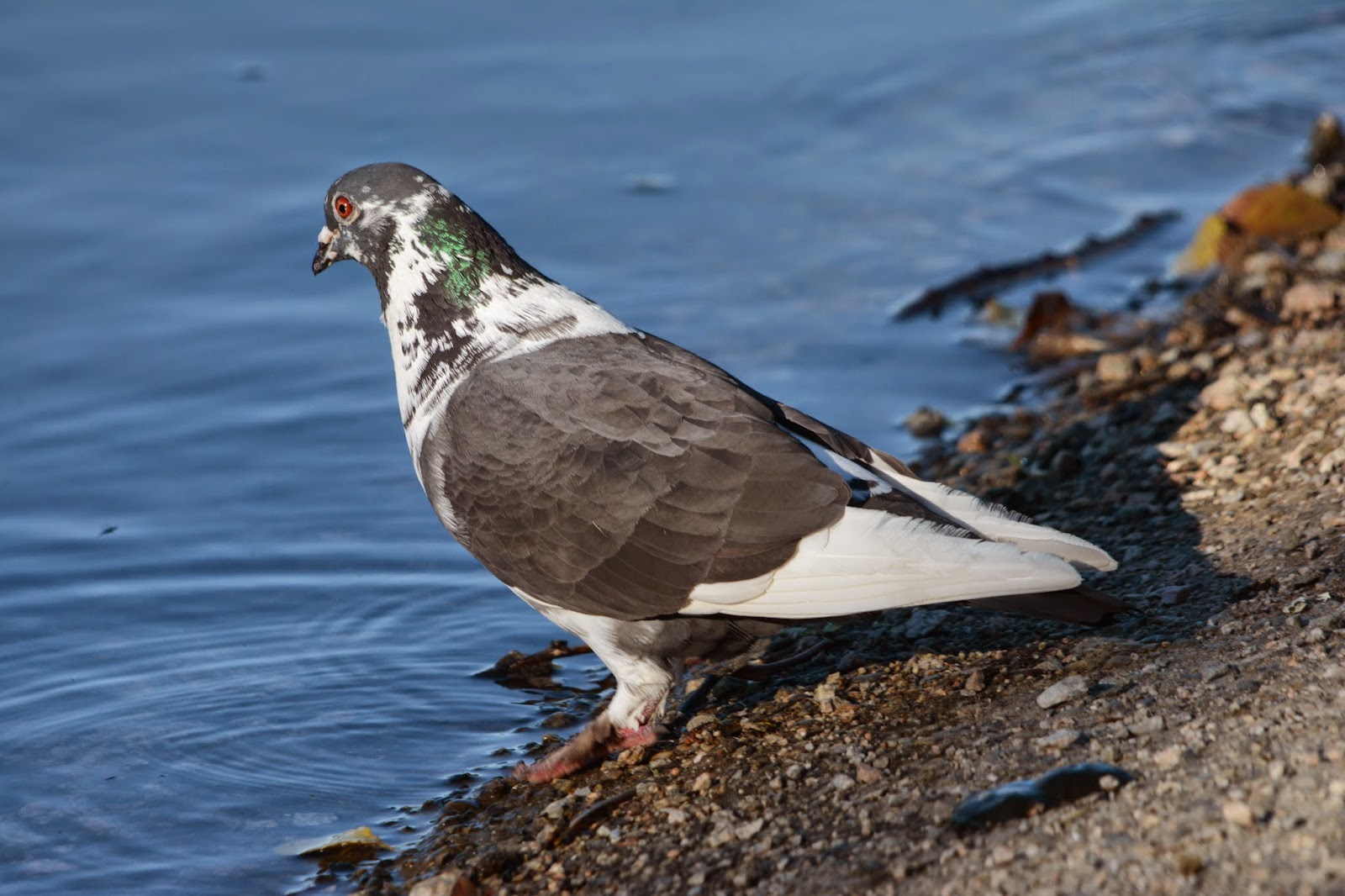 Not entirely happy with the day's photos, I still felt I had learned something.  These cormorants (?) were to be my last shot of the day.  They, too, had been tiny specks in a distant sky, and though their details were not entirely clear, at least the outline was sharp. 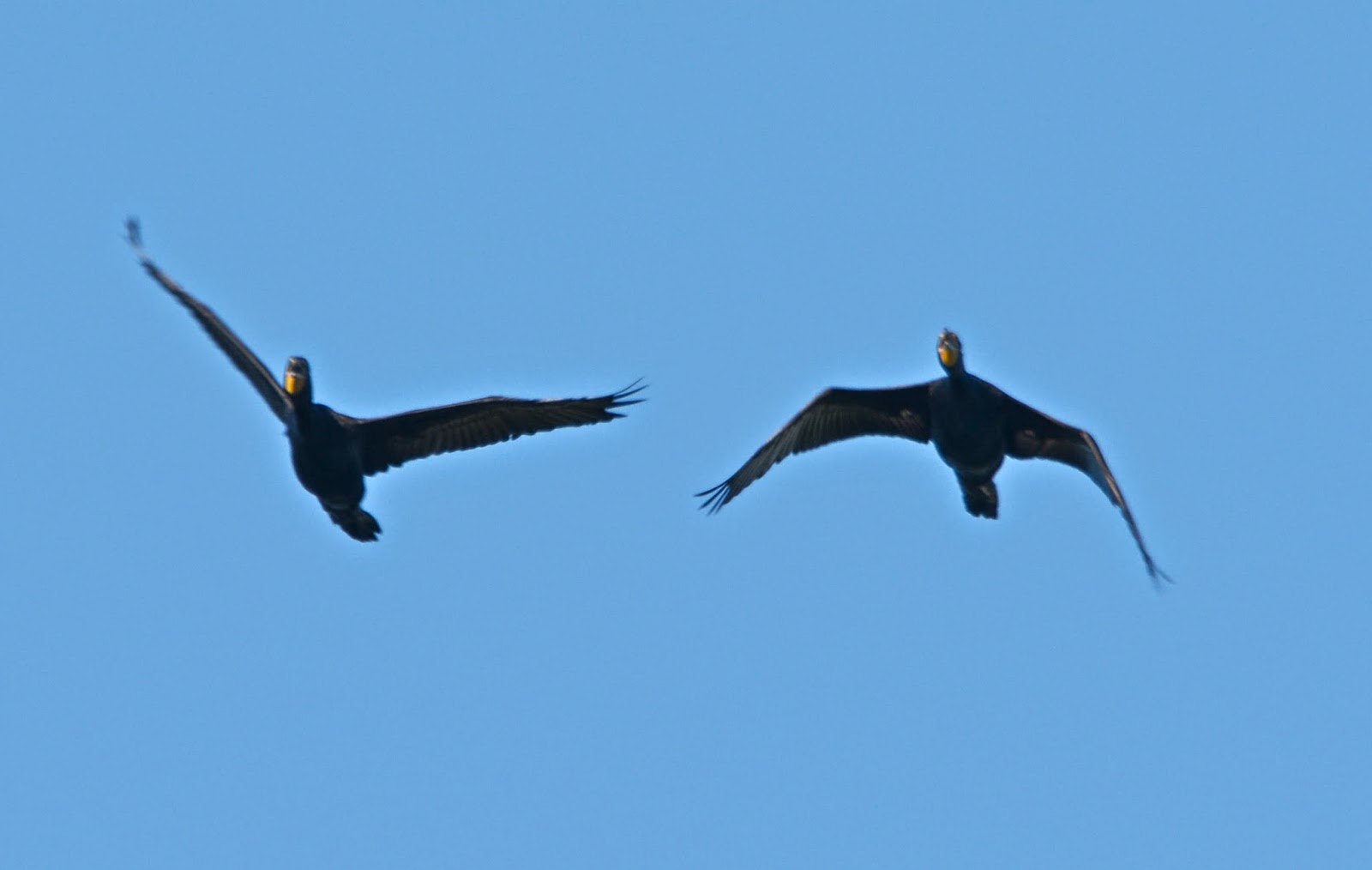 We were about to get on our bikes when high drama happened over our heads. 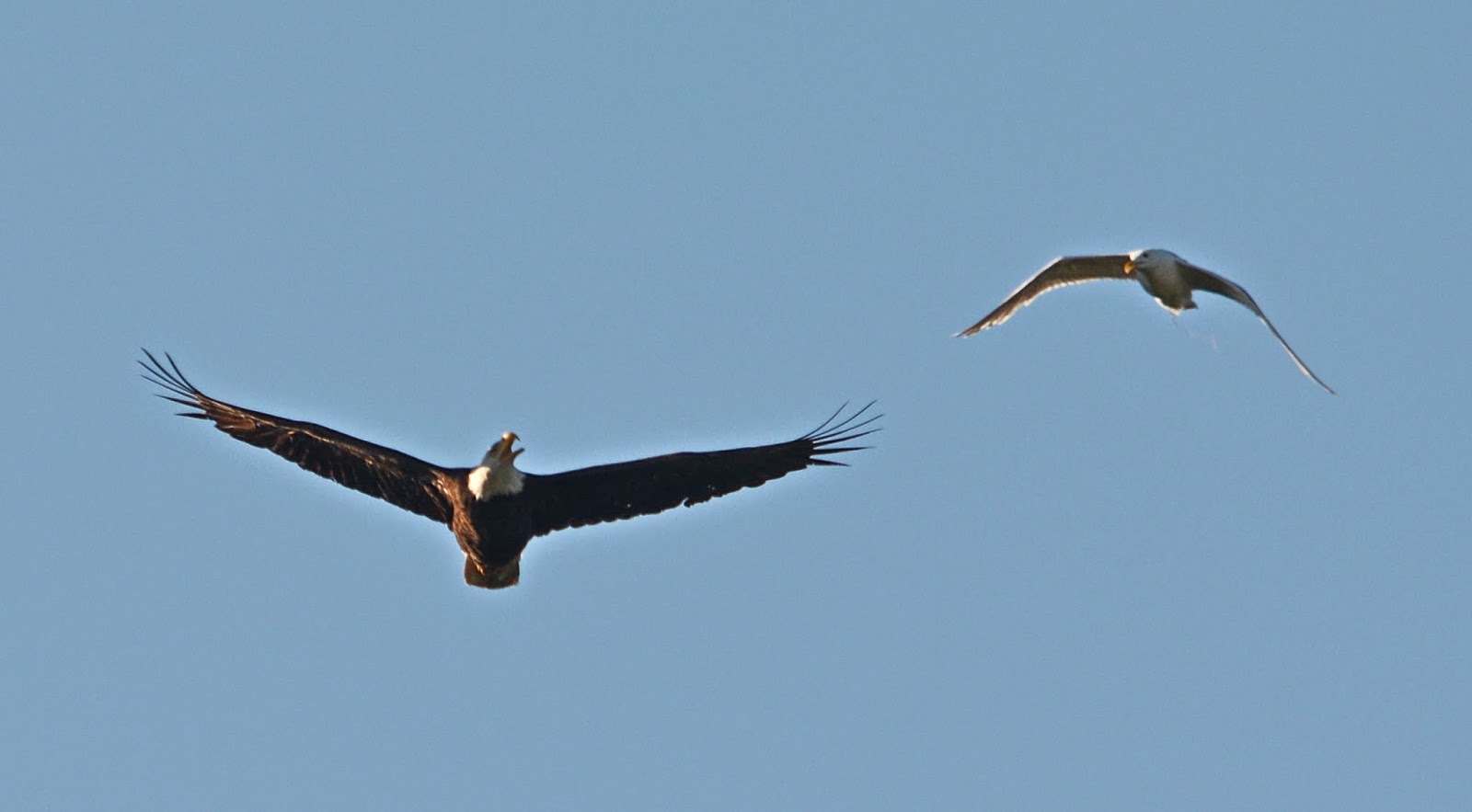 The eagle was on its way to the heronry for his/her afternoon snack, 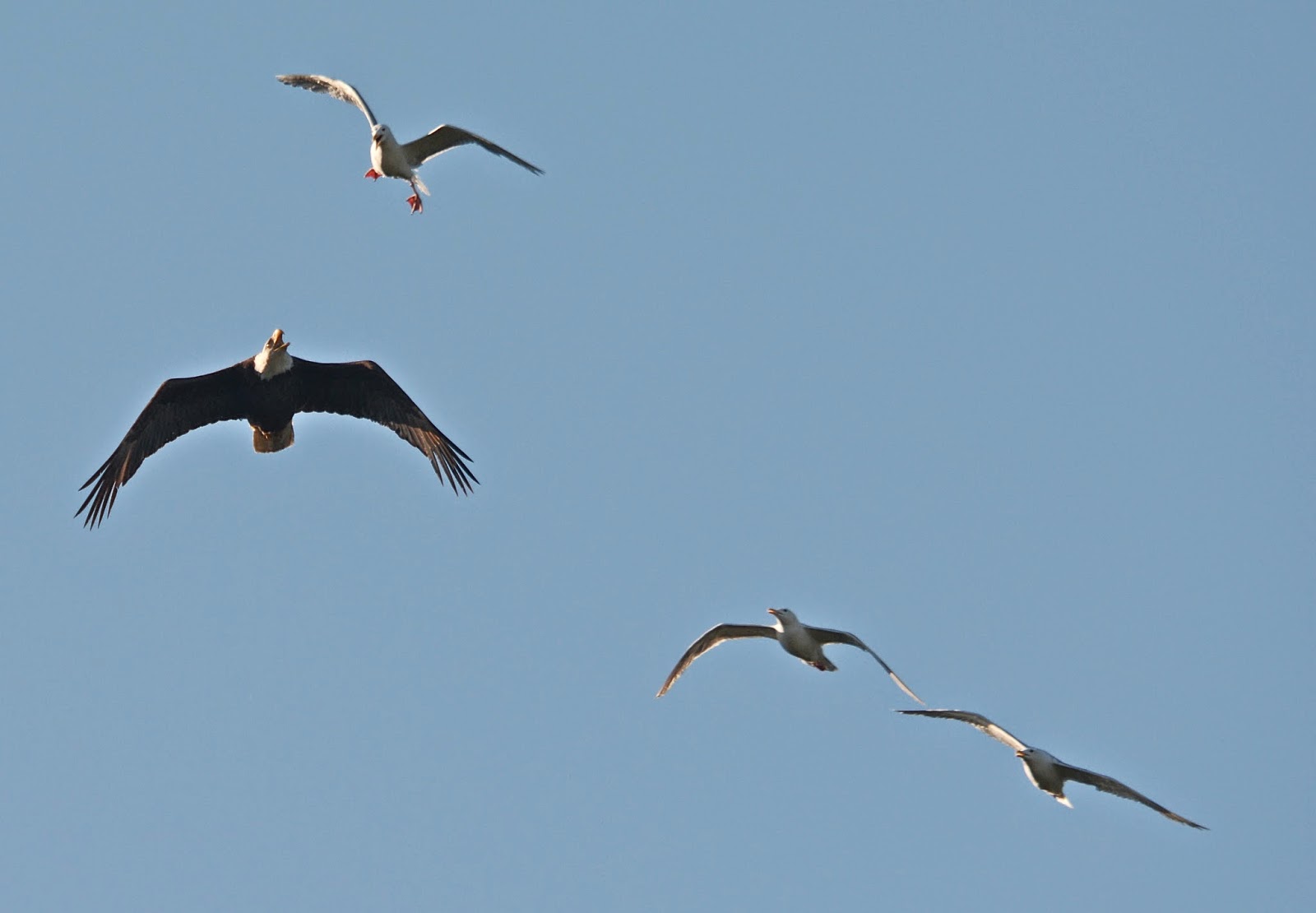 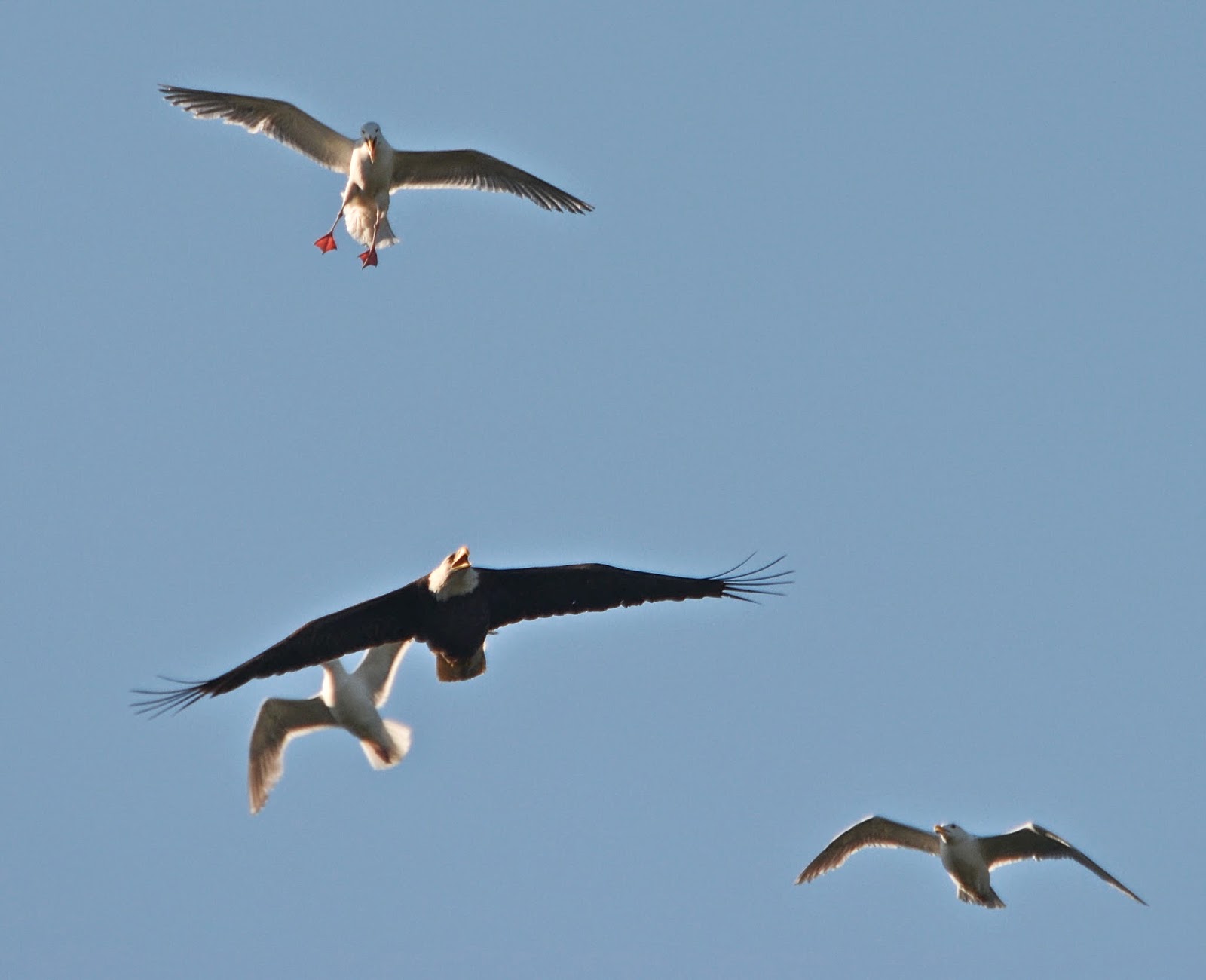 make that an unsuccessful mission. 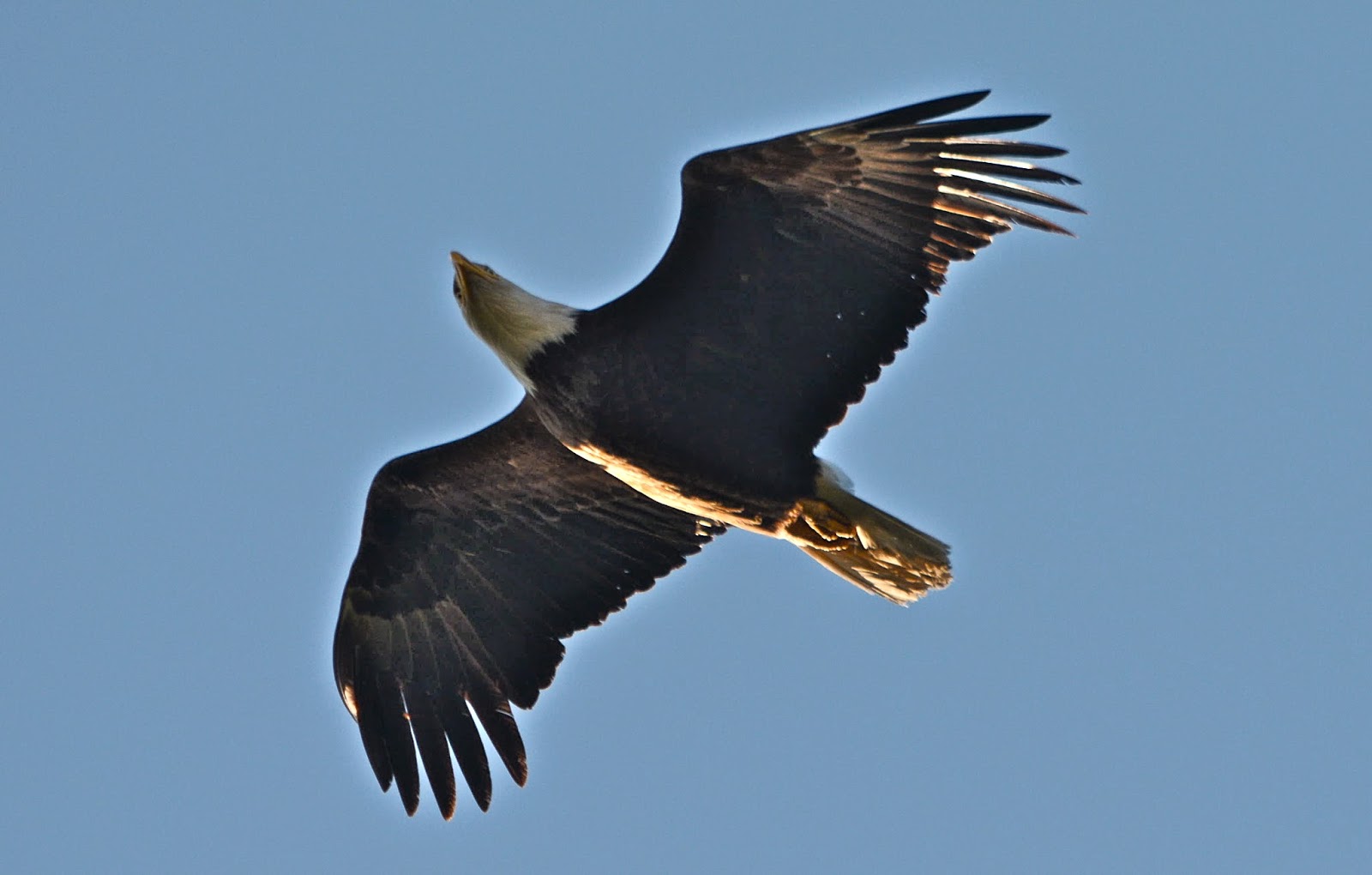 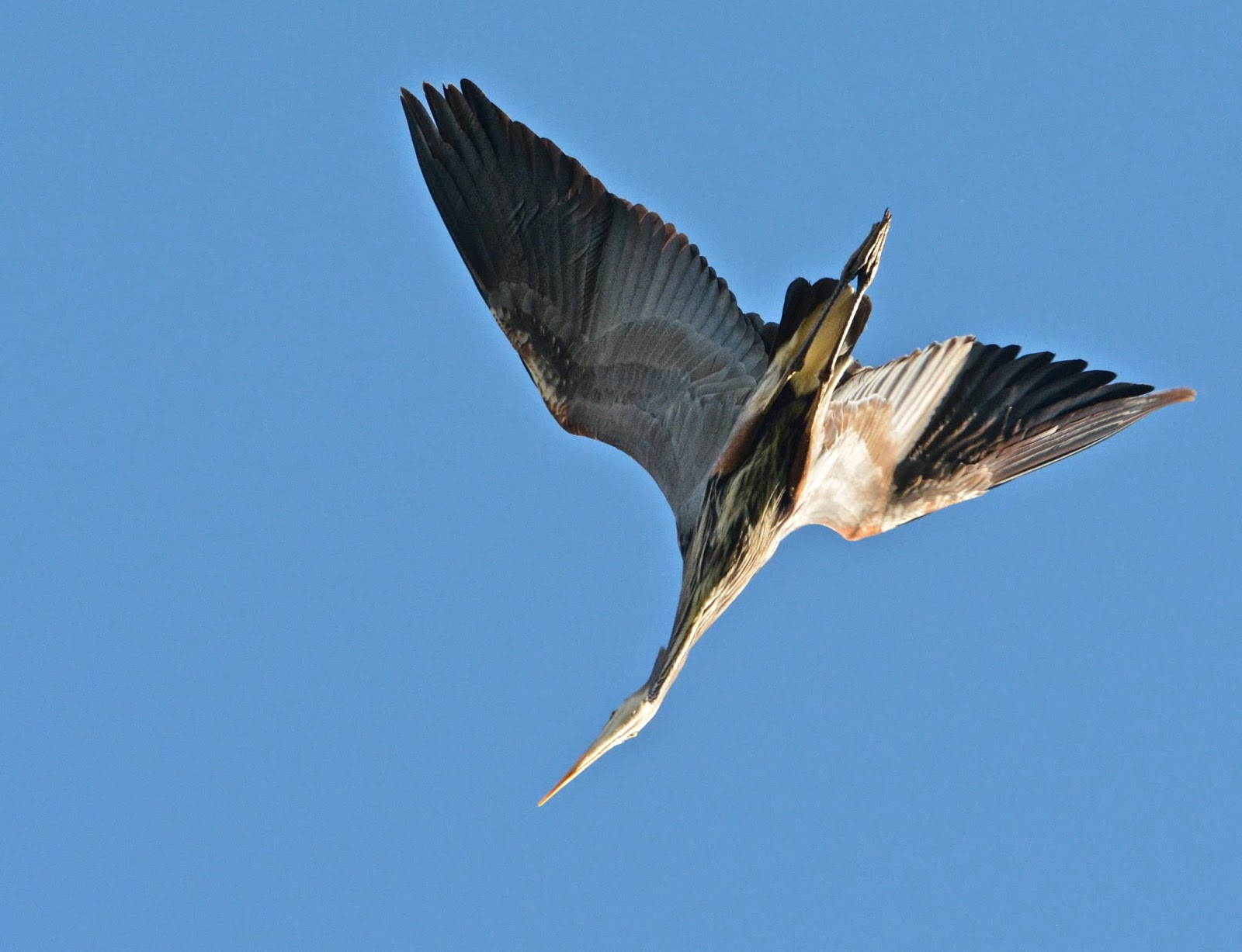 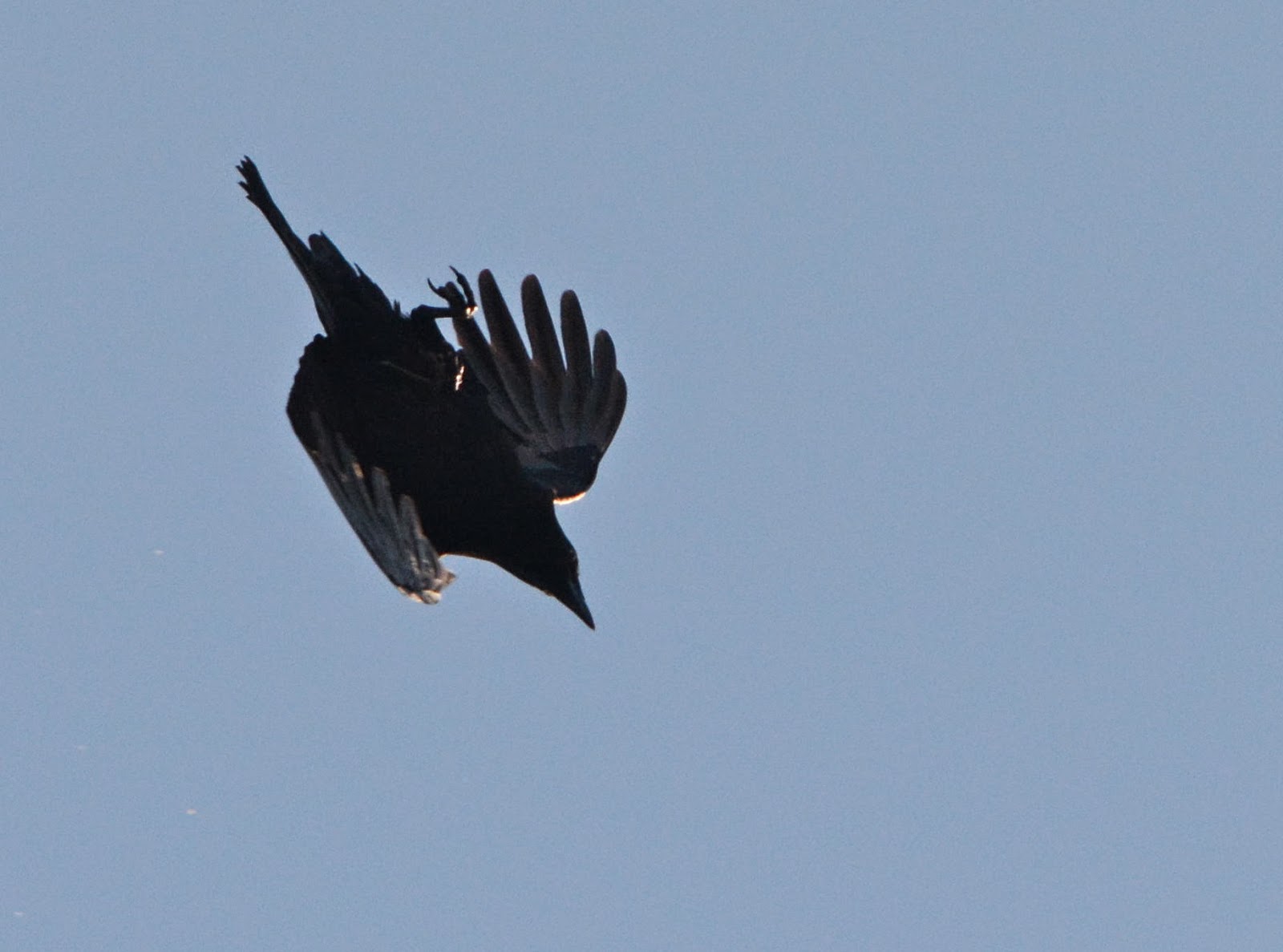 all headed to the tree where the eagle.. 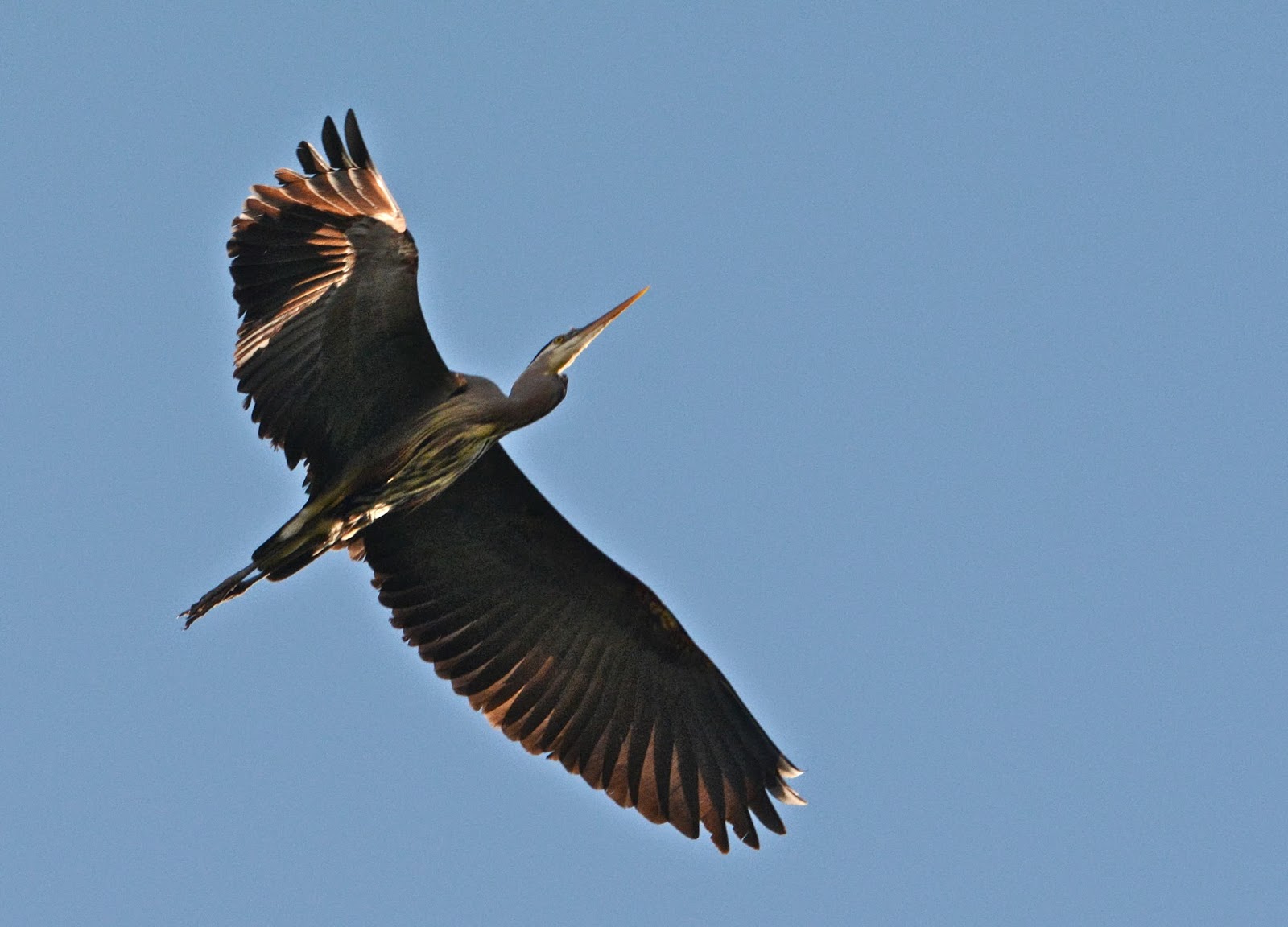 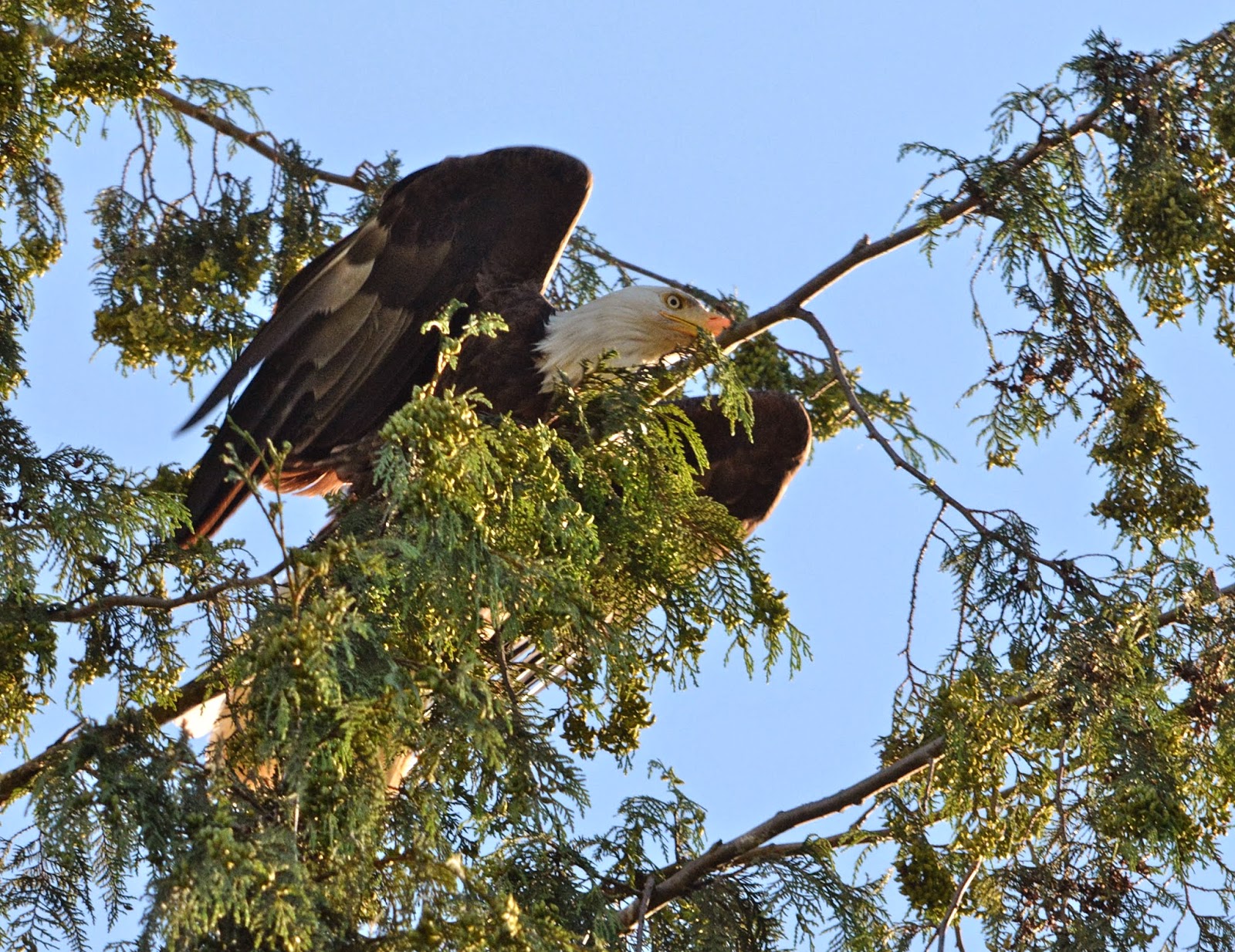 Desperate cries, heartrending screams, and harsh caws filled the air.  The foliage hid most of the story from us.  I do not know if the eagle's mission was satisfied but the sounds of the moment live on in zoetic intensity.  I feel no zoilism against the eagle.  Most likely, there are waiting young back at his/her nest.  The reality of nature is cruel, but life seems to carry on as it is intended to do and it is my thought that the less interference from humans, the better. 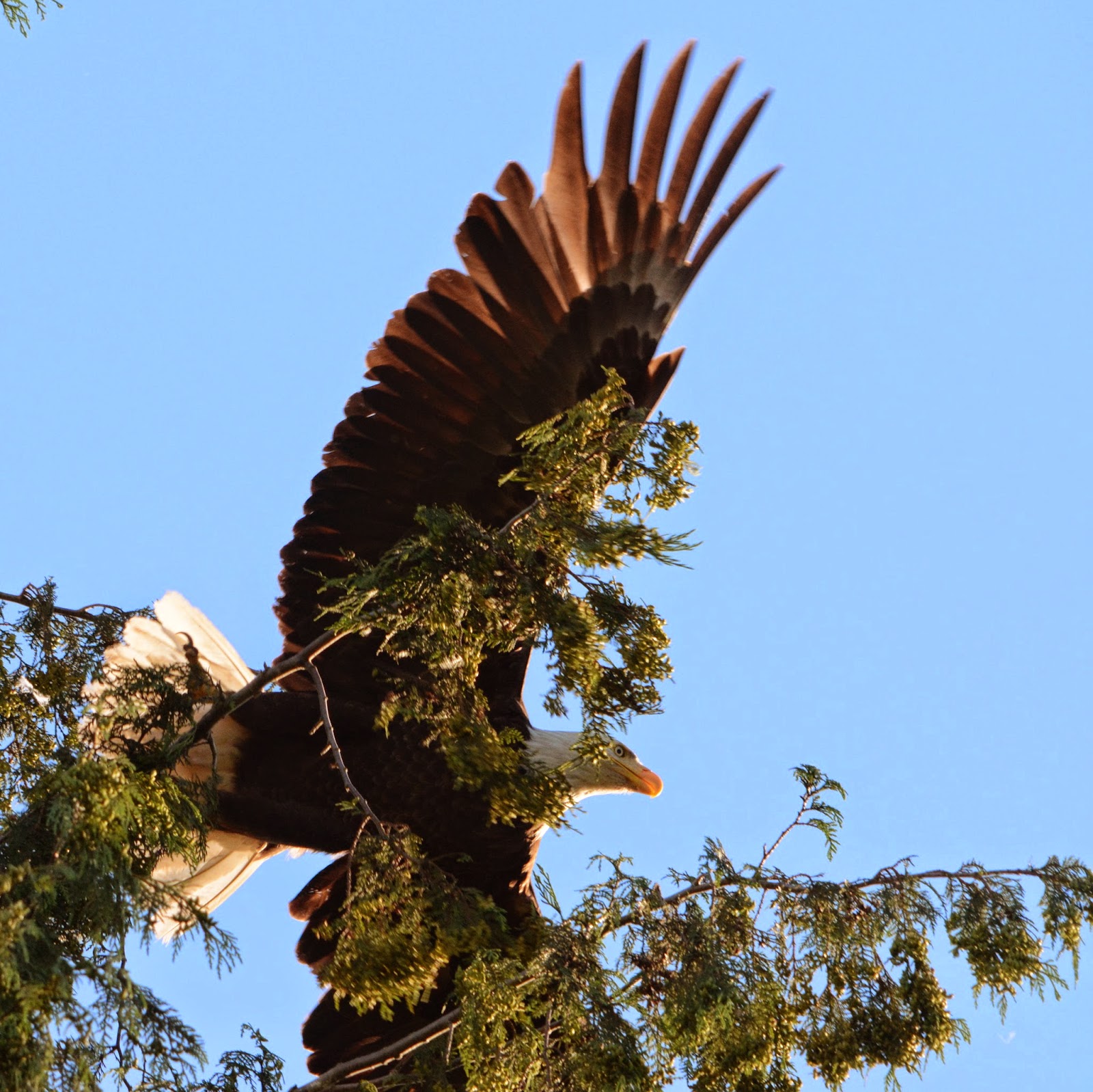 Thanks so much for stopping by.  If you would like to find out more about ABC Wednesday, or about the wonderful bird memes, just scroll to the top of the page to get those links.  Happy Wednesday to you.  May there be no zoilism in your life and lots of zoetic moments.
Posted by Black Jack's Carol at 11:06 AM