Happy Father's Day to the extraordinary dads in Bill's and in my family, and to those in 76 countries across the world who choose this day to celebrate fatherhood.  I will share my post with Sundays in My City.  Thank you to Claudya (Unknown Mami) for hosting this fine meme.

A memory playing across my mind this morning is of my father driving us home from music lessons each Wednesday night.  "Home again," he would say as we pulled into the yard after the 10-mlle drive.  In fact, he said those words after pretty well every trip that took us away from our town.  A gentle man and a good man, he appreciated home.  I remember him with love. 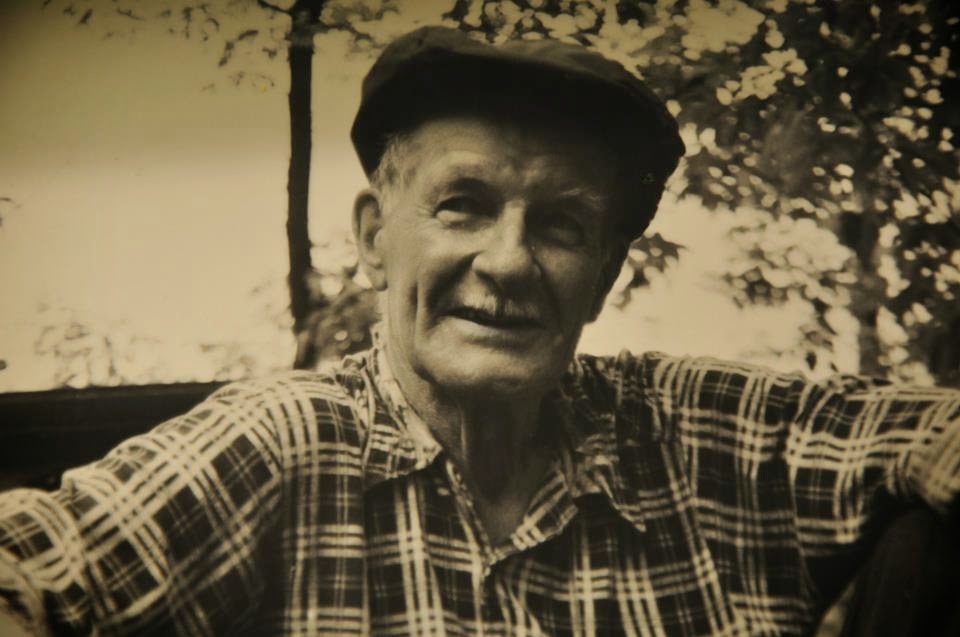 The fog horns called out for a good part of the day in Vancouver yesterday.  Bill and I didn't ride our bikes but walked in the afternoon to Harrison Galleries in a light but steady rain. We chose our crossword from a stack of newspapers in the corner.  It was a tough one yesterday.  It made our brains ache but at the same time, it drew us into its challenge.  The past two days, we have sat near this painting by Victoria Block, a landscape painter and ceramicist who lives and works in Montreal.  I love the contrasts of heat and coolness. 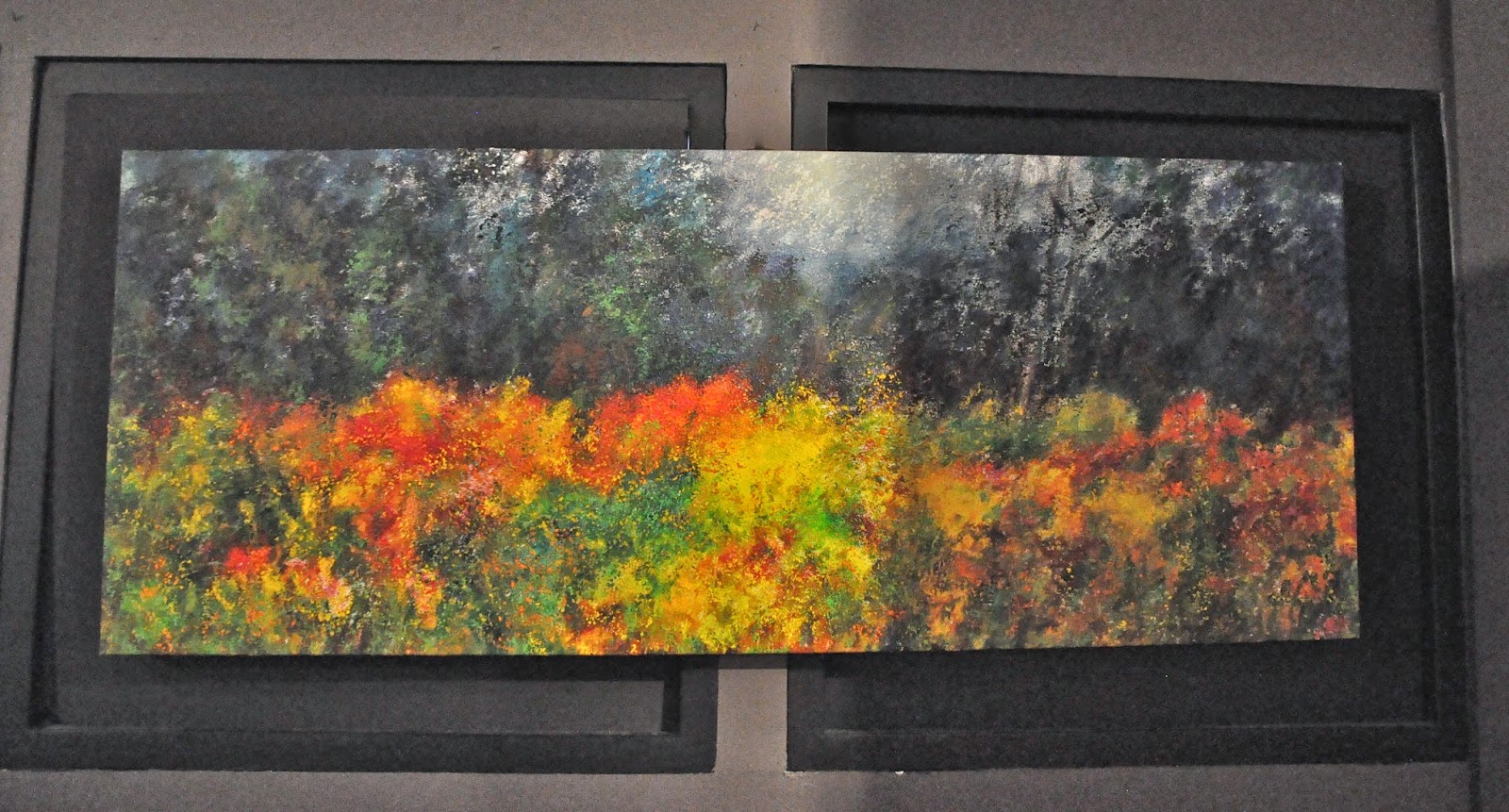 Before we left, I walked around as I often do, taking photos of works that I "feel" as we sit with our lattés and cookies and crosswords.  Walking into Harrison's with Bill is, for me, not so different from the arrival "home" of my father's experience, I think, though the immediate surroundings change a bit more steadily than they would have for him.  Familiar paintings sometimes turn up on different walls and I love the way new ones slip under my skin, gently at first and then more insistently.  At the Curb, below, is by Jonathan Holland. 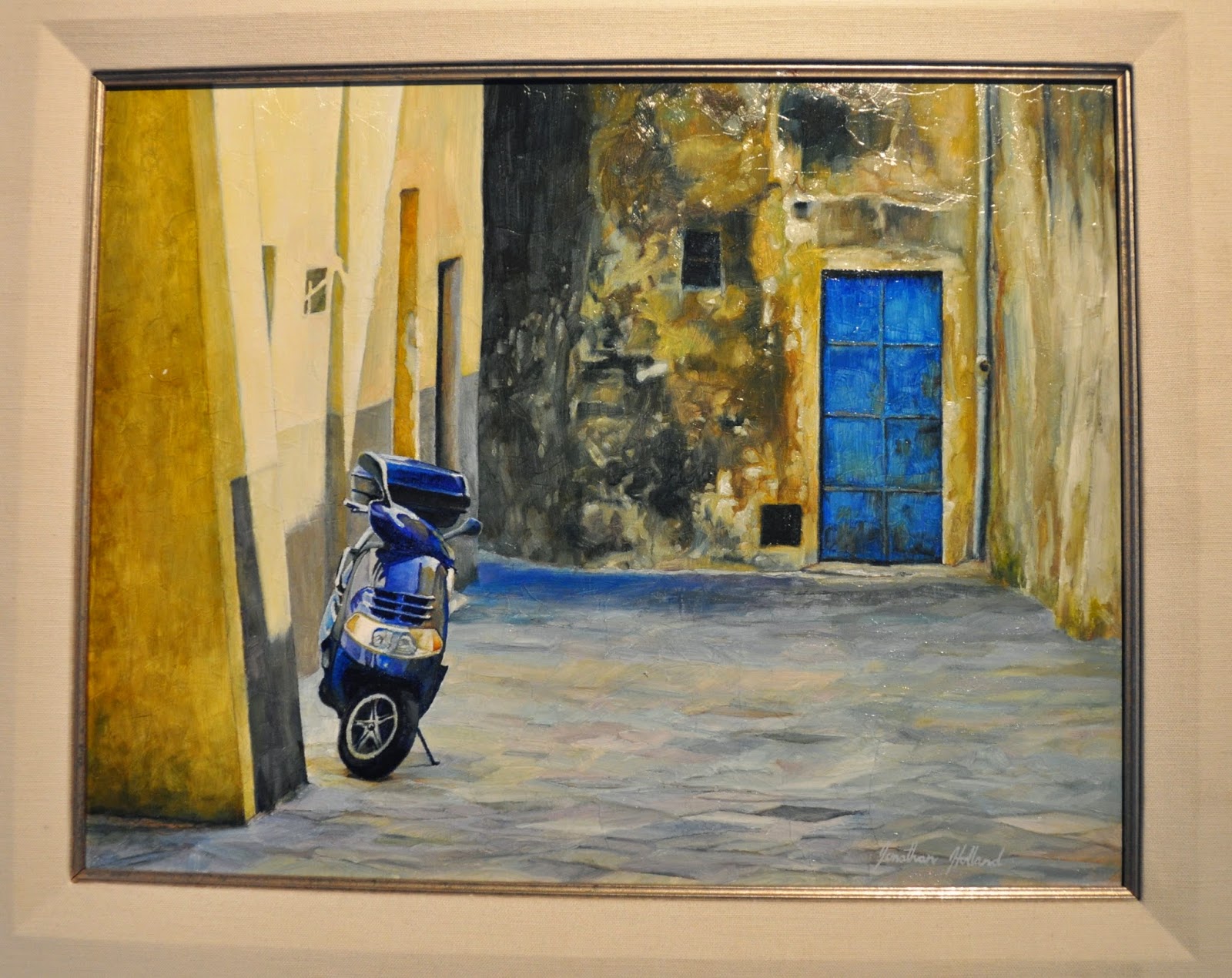 I'm wondering if this one could be by Kenna Graff. 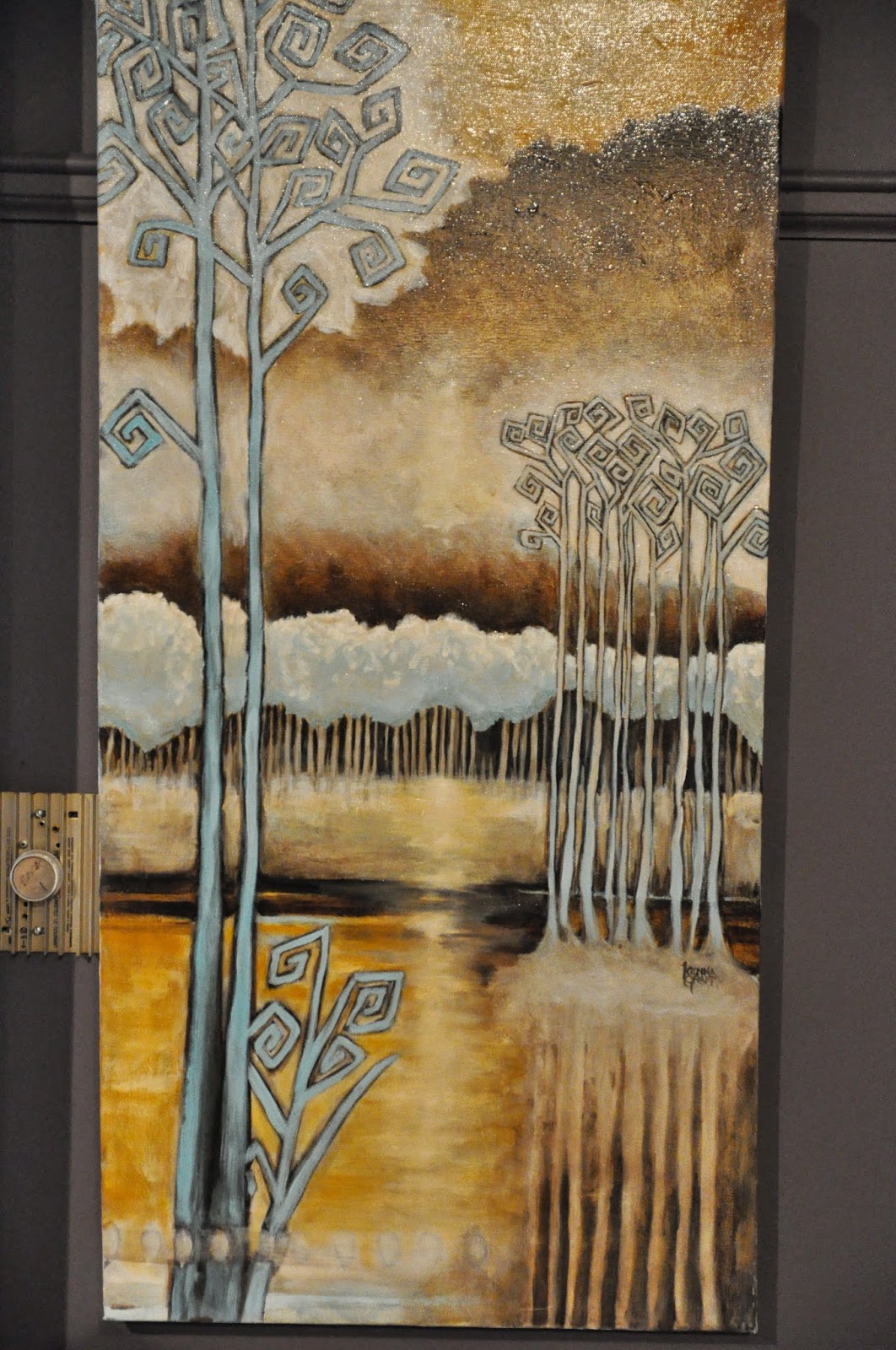 We brought the crossword home last night.  After supper, I tried to capture the fog through our apartment window, thinking of Carl Sandburg. 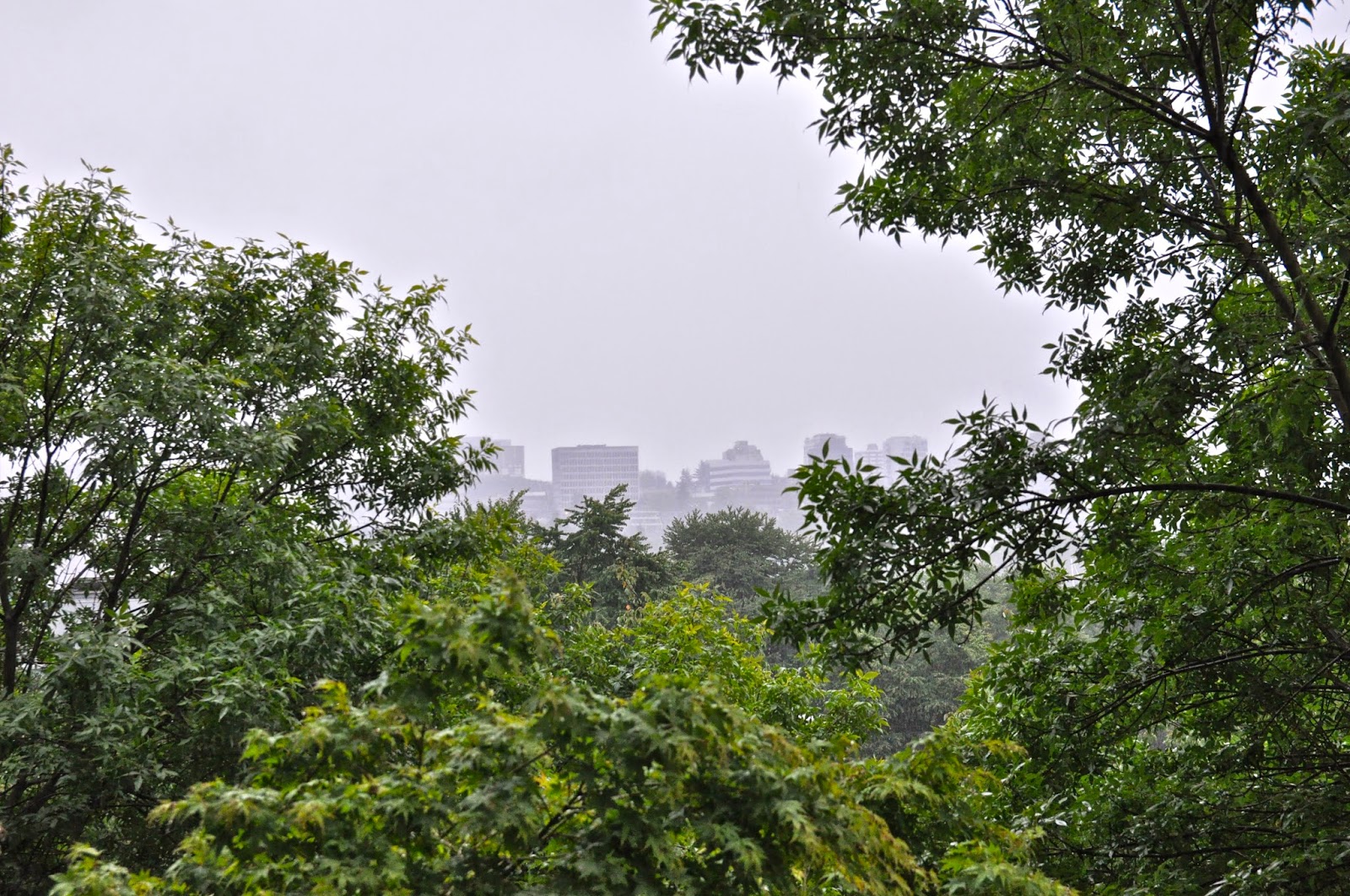 There had been a clue in the puzzle that required us to remember Sandburg's quote: "I'm an idealist. I don't know where I'm going but I'm on my way."  Bill had an idea of the quote but struggled to find the exact words.  I had never heard of the quote.  (I'm like that.  Things that most people know seem, sometimes, to have escaped my notice.) 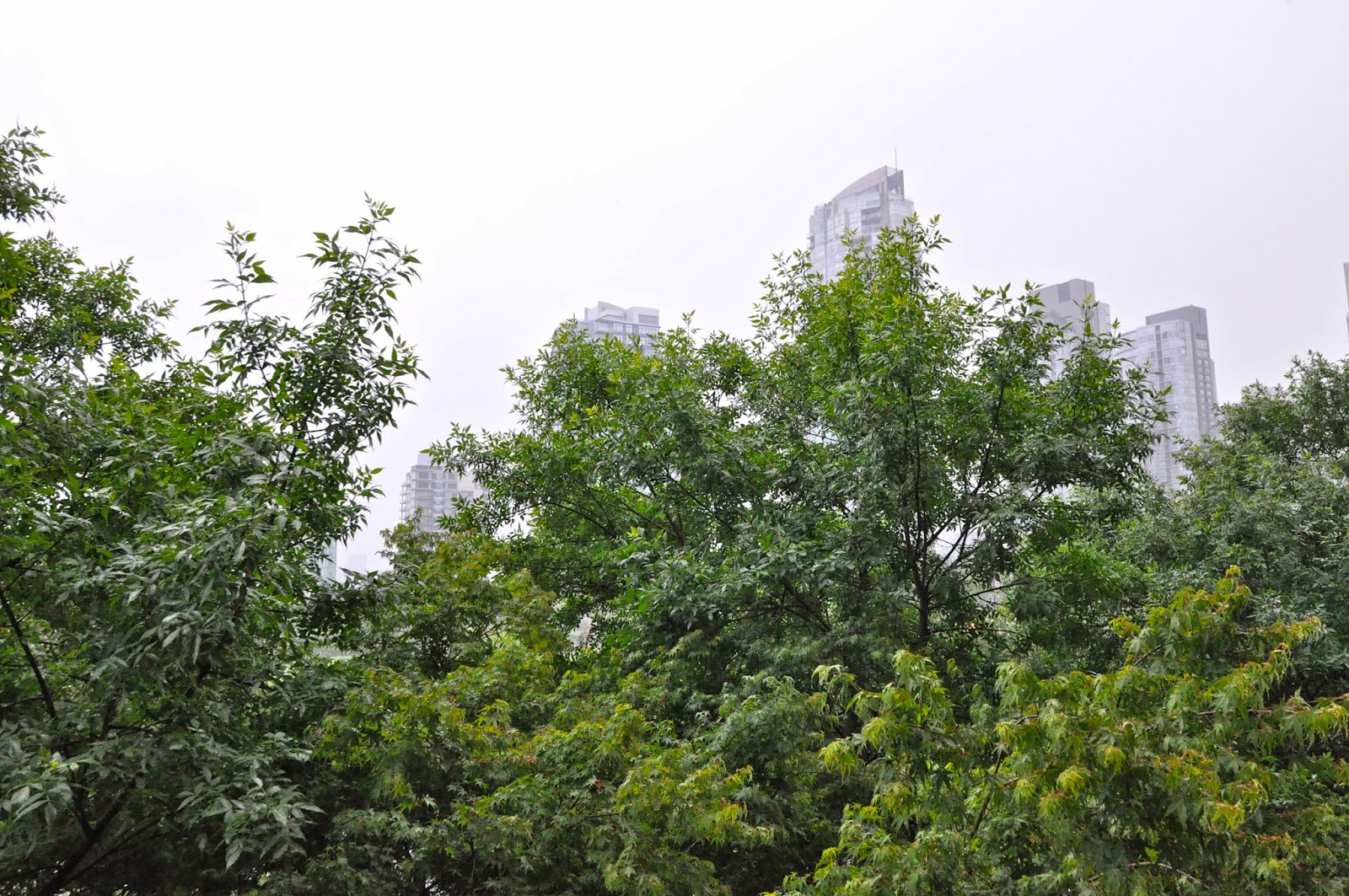 The only Carl Sandburg words in my mind were: "The fog comes on little cat feet.  It sits looking over city and harbour on silent haunches and then moves on."  This is a rather strange video, but the second and third repetitions of "Fog" are recited by Carl Sandburg himself.  Bill and I struggled last night with the crossword.  It seemed we couldn't let it go. 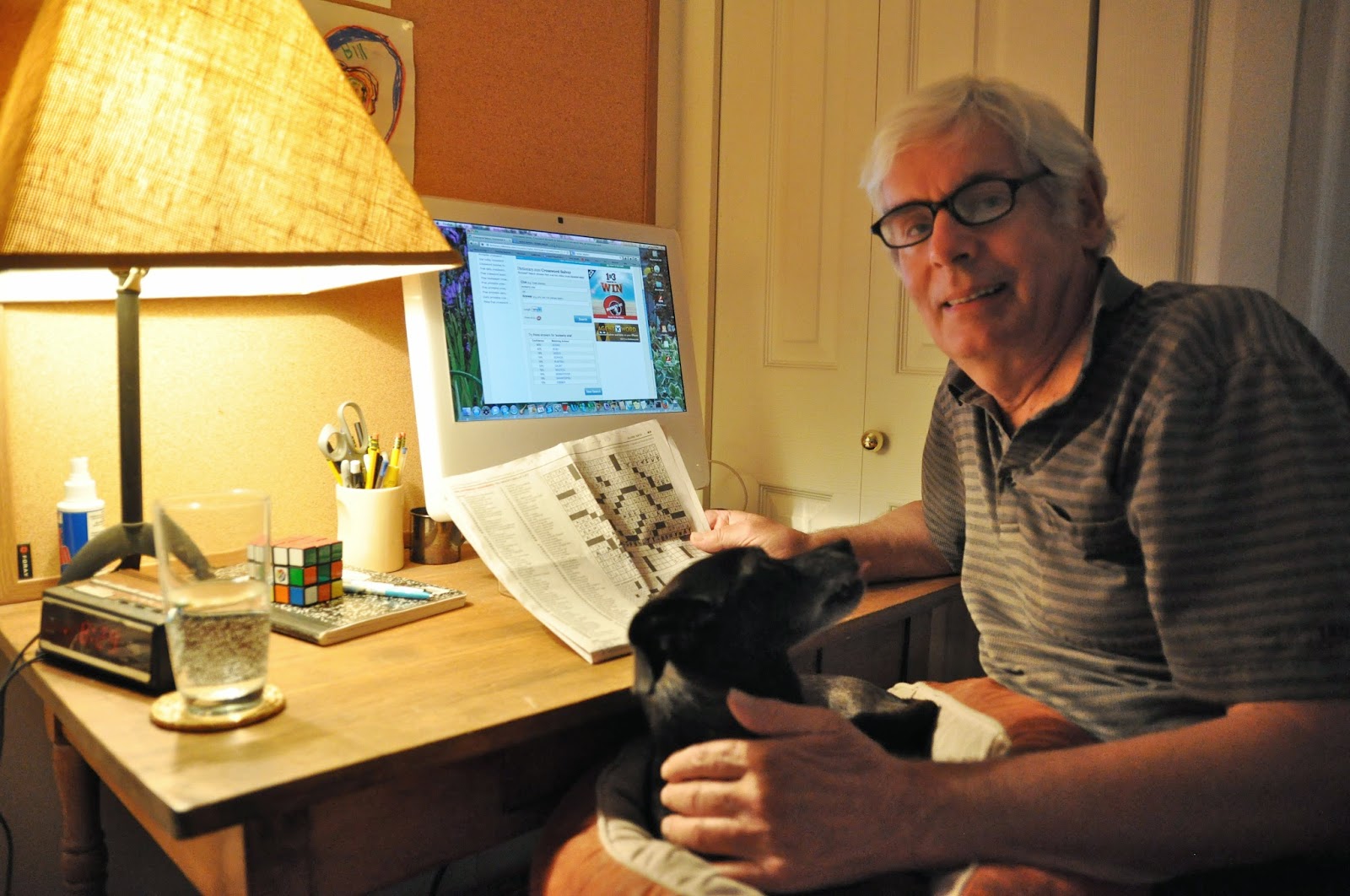 We cheated (very rare for us). 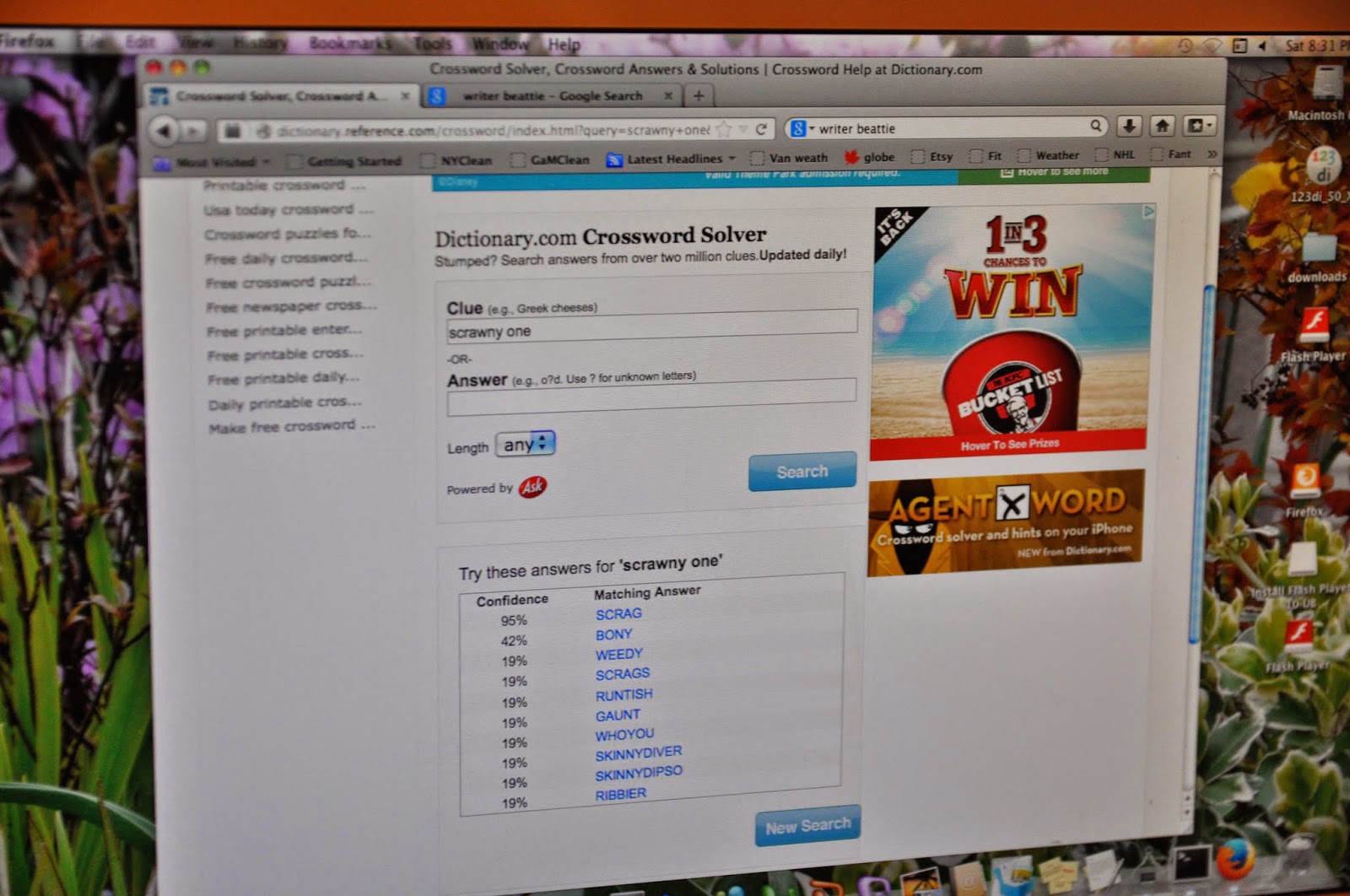 Black Jack told us it would be okay :) 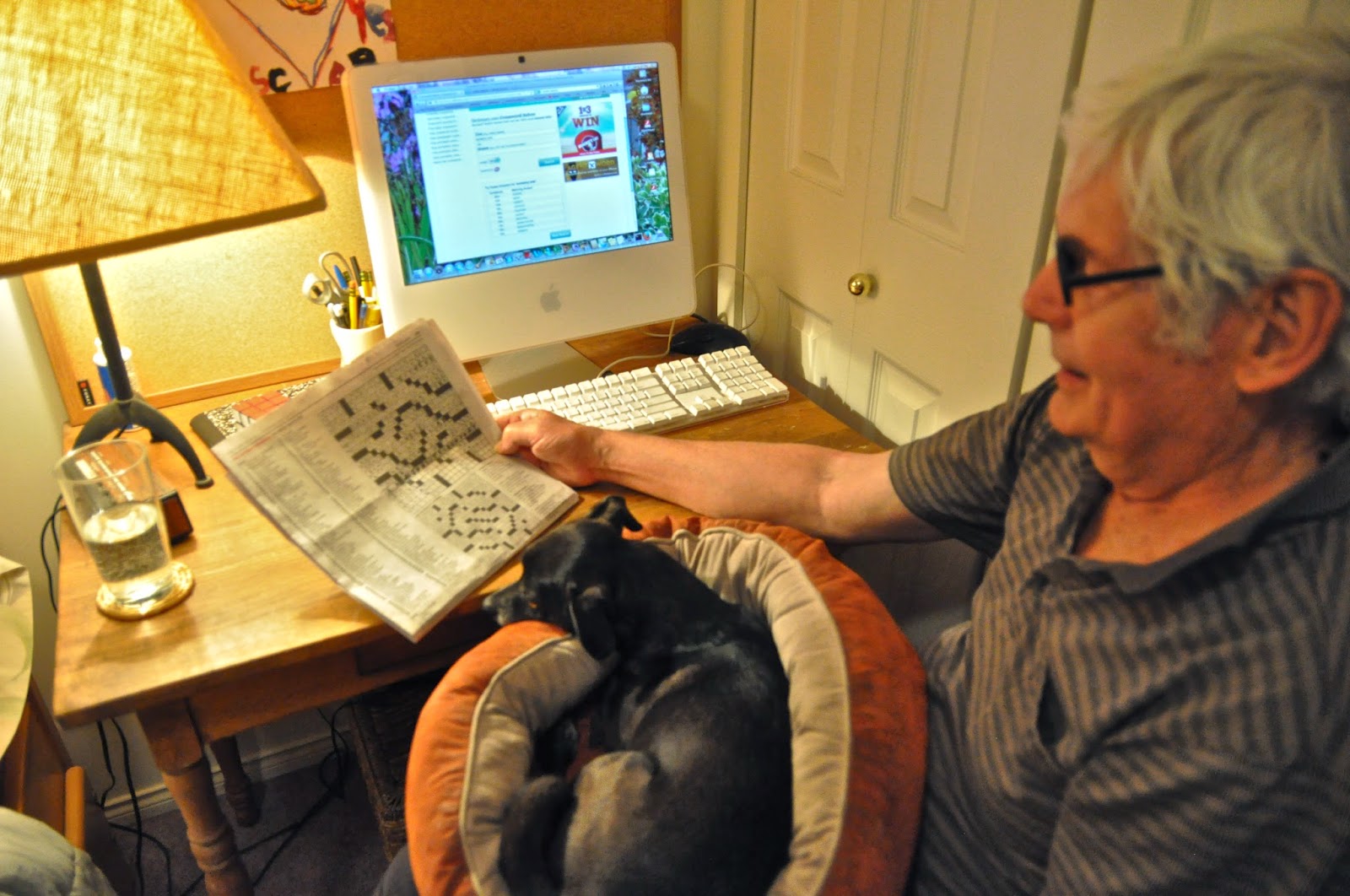 We didn't finish it, even with the help of Dictionary.com's crossword solver, but we made a really good stab at it.  I love that one clue.. 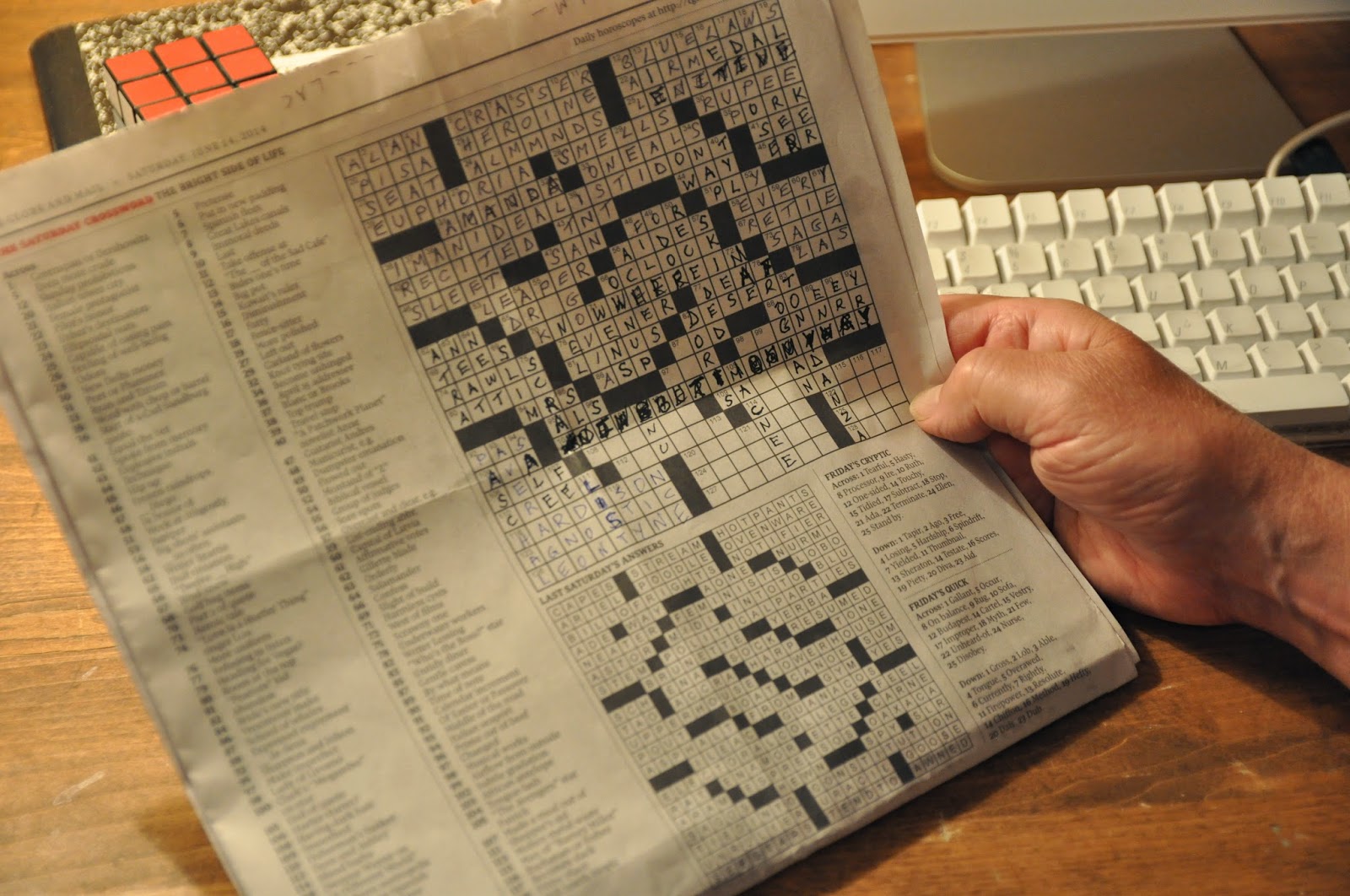 connected our day to Carl Sandburg.  This morning, I have learned that he had three daughters, Margaret, Janet and Helga.  He gave them the nicknames "Spink", "Skabootch" and "Swipes" and used those names in some of his Rootabaga Stories that he wrote for them.  In 1945, he lived with his wife, three daughters and two grandchildren on a 245-Acre rural estate in North Carolina.  Something tells me he enjoyed fatherhood. 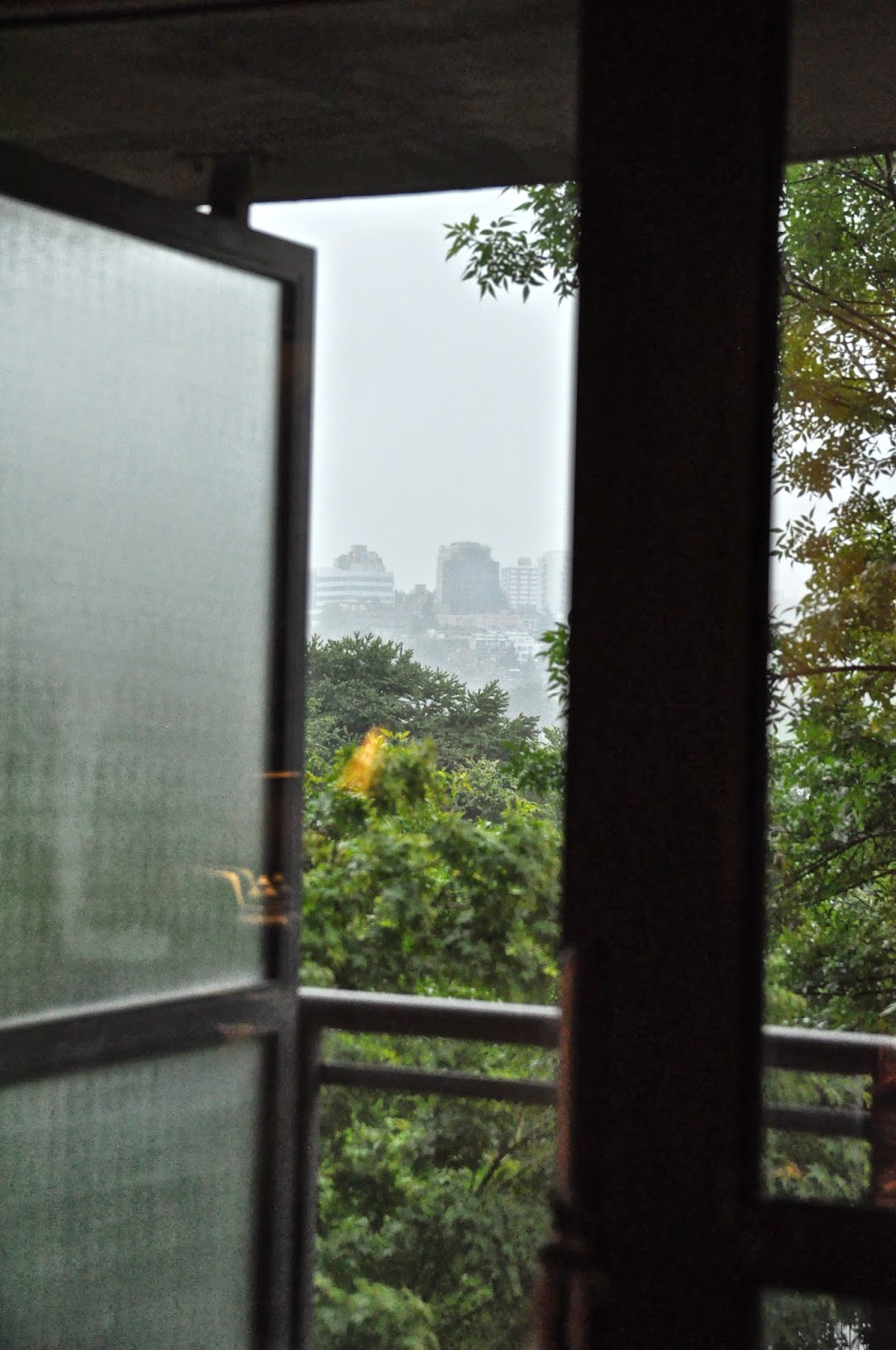 My last photo yesterday was taken from the 8th floor of our building.  David Lam Park is on the left, Pacific Street is to the right, and in the background, the Granville Bridge is almost obliterated by fog.  I'll leave you with one more video link.  It's a What's My Line episode with Carl Sandburg taped in 1960.  I loved it because it brought back a memory of a TV program called "Front Page Challenge" that we watched as a family and because it brings Carl Sandburg's personality alive for me, even though he died in 1967.  I am a little bit sad that I can't bring my father back in the same way, but I am happy that my sister and I have our memories and stories and that we can share them with each other. 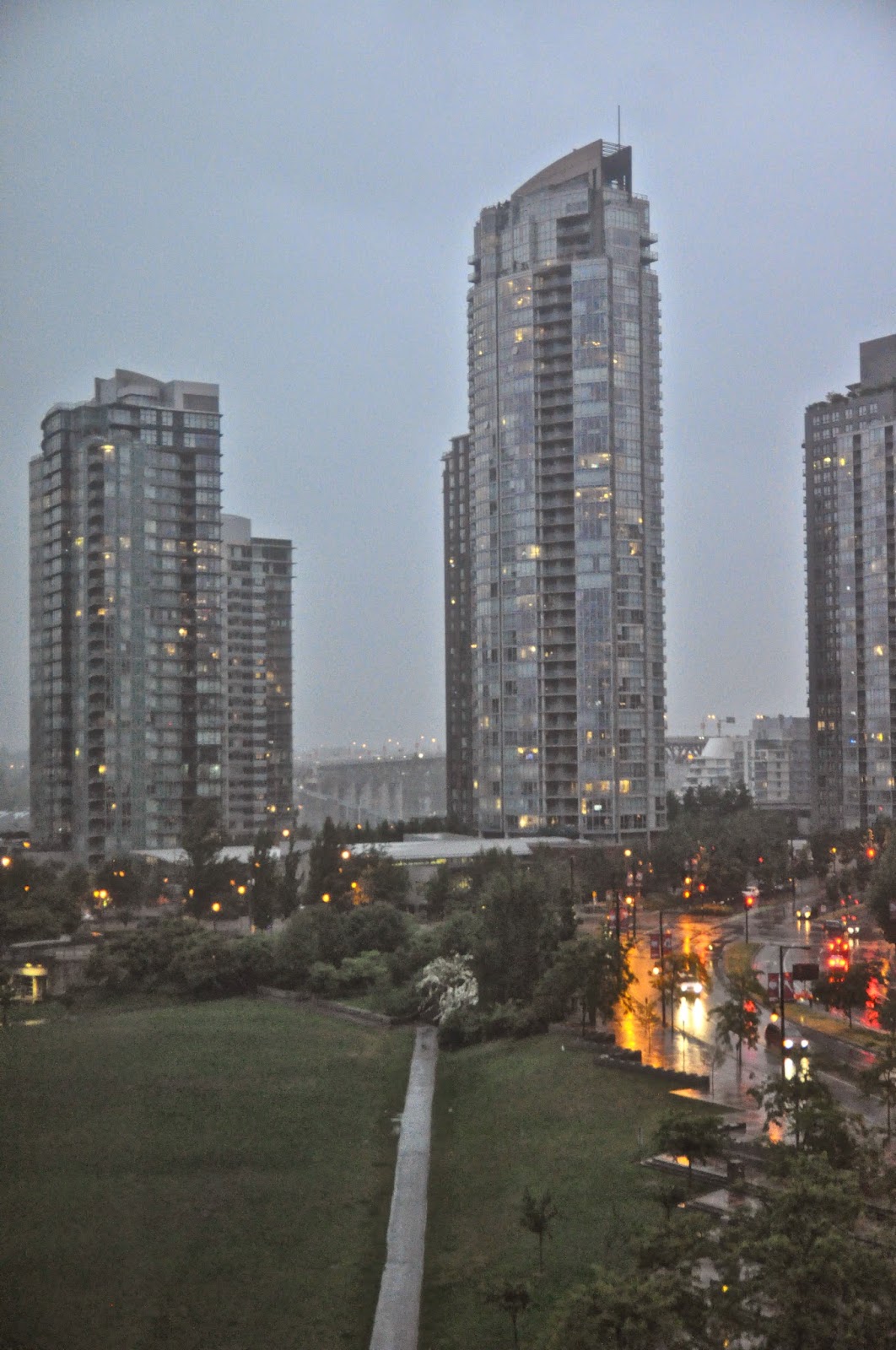 Thank you for taking time to read my words and look at my pictures.  Whatever your experience of fatherhood (I know memories and experiences for some may be painful), I hope you will take the day and make it a good one for you and for the people around you.
Posted by Black Jack's Carol at 9:50 AM