A collection of Fences and other thoughts

I'm recovering nicely from yesterday's dental appointment, one that I won't pretend was fun (think three extractions, three bone grafts and three implants all done in the space of one visit) but was probably handled as well as such things can be.  Many thanks to those of you who sent your good wishes.  I was scared and every encouraging word meant a lot. For now, I'll reserve judgement on the end result.  There's more to do in the new year and I'm getting used to a new dentist (poor fellow also has to get used to me) referred by the doctor who has taken care of most of my dental needs since moving to Vancouver 15+ years ago. 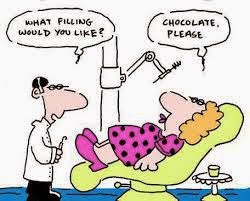 (image found at this site)
But to continue with the main point of this post, I've gone back over the past week's photos to gather some of the fences enjoyed during our Yaletown walks.  Why fences, you ask?  Well, it's all because of Theresa (aka TexWisGirl) and her Good Fences meme.  Many thanks, Theresa.  You add another dimension to the way we see our world.

A hedge-fence Christmas combo admired one evening as we walked along Richards Street. 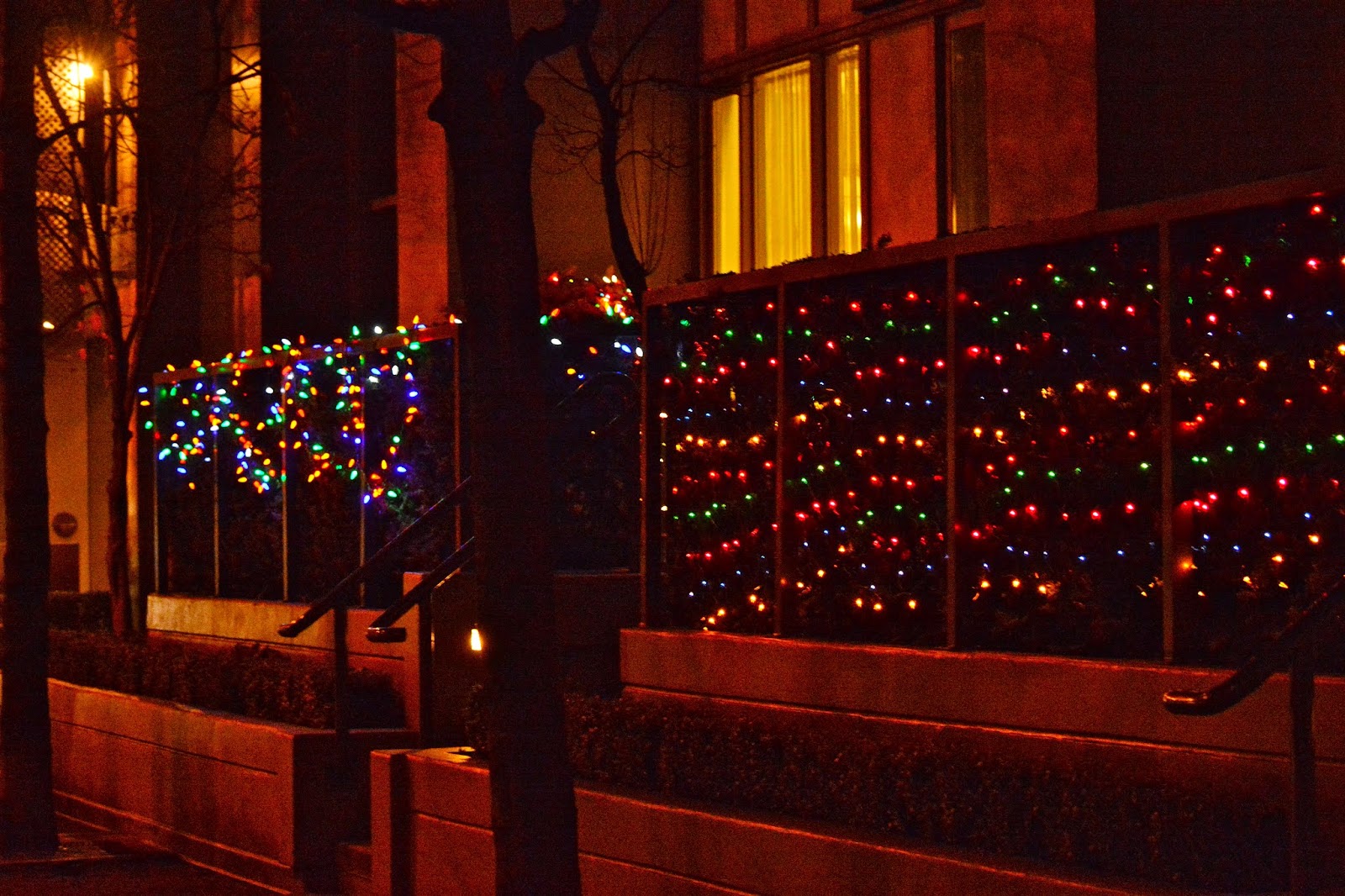 Just a few steps further, there was something about the warm atmosphere through the window behind this fence that I liked. 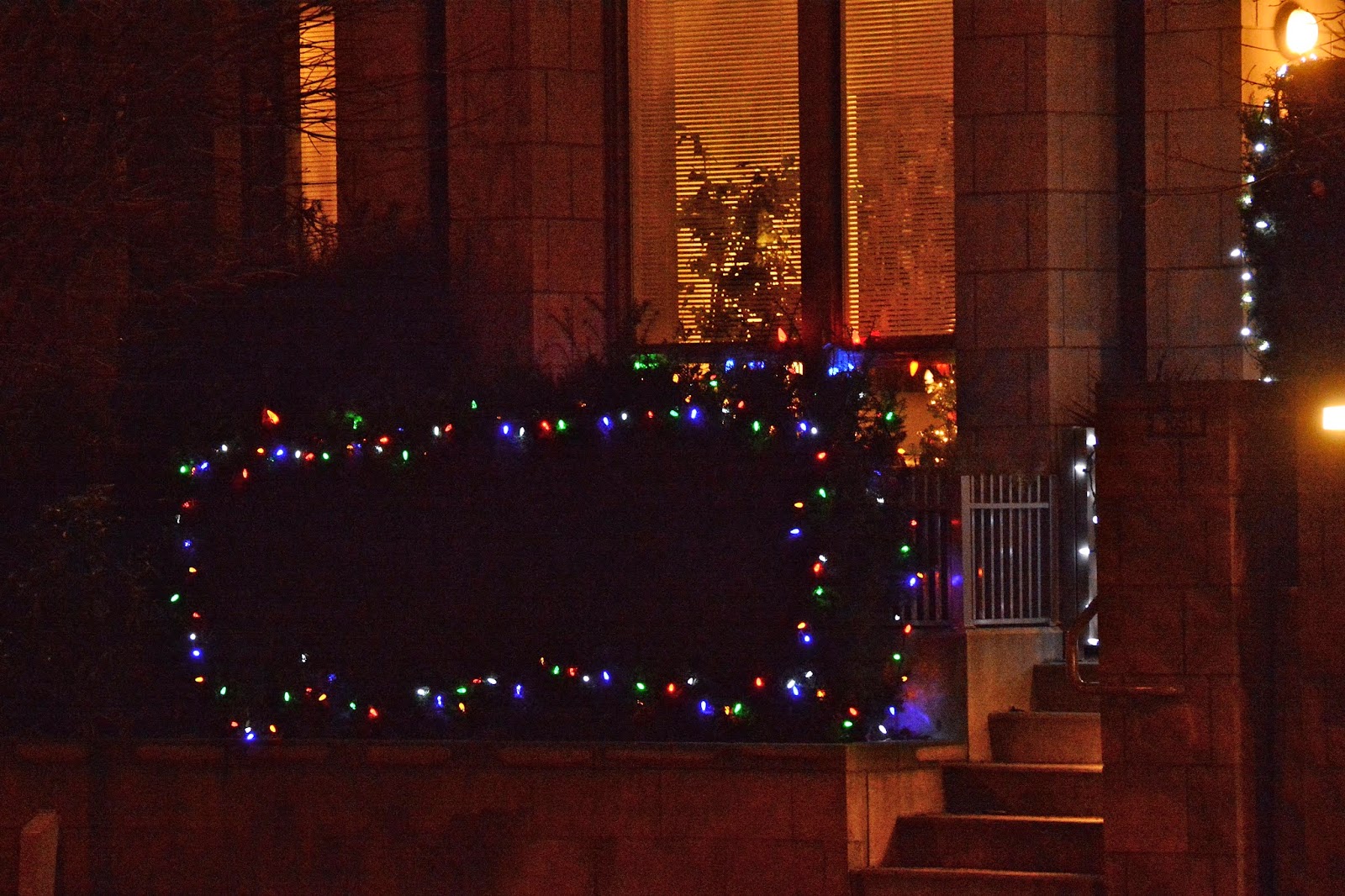 And then, this small fence outside a hair-dressing salon next door.  I liked the line of  "O's"  just under the top border, but had a hard time.. 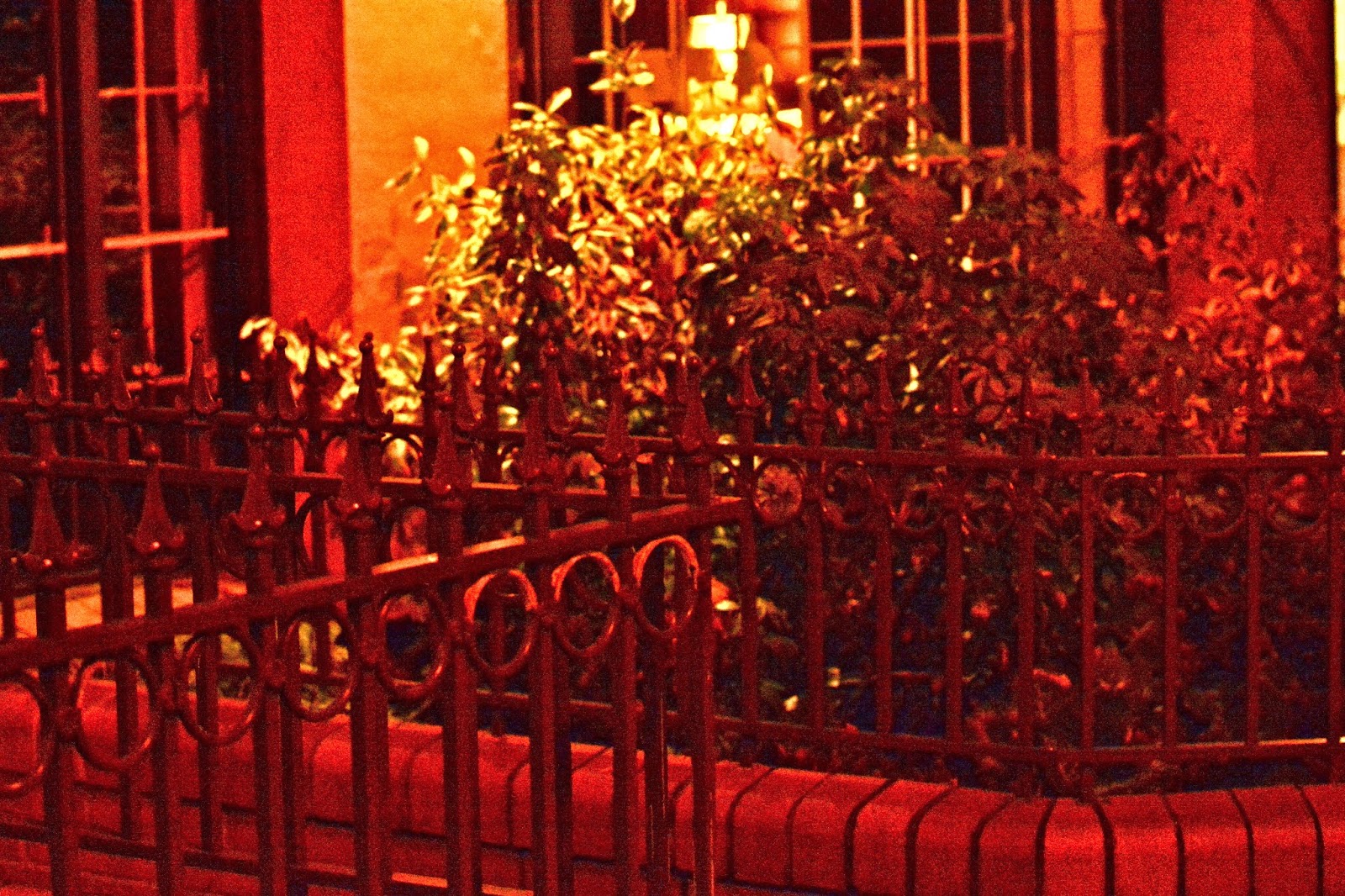 getting it to stand out.. 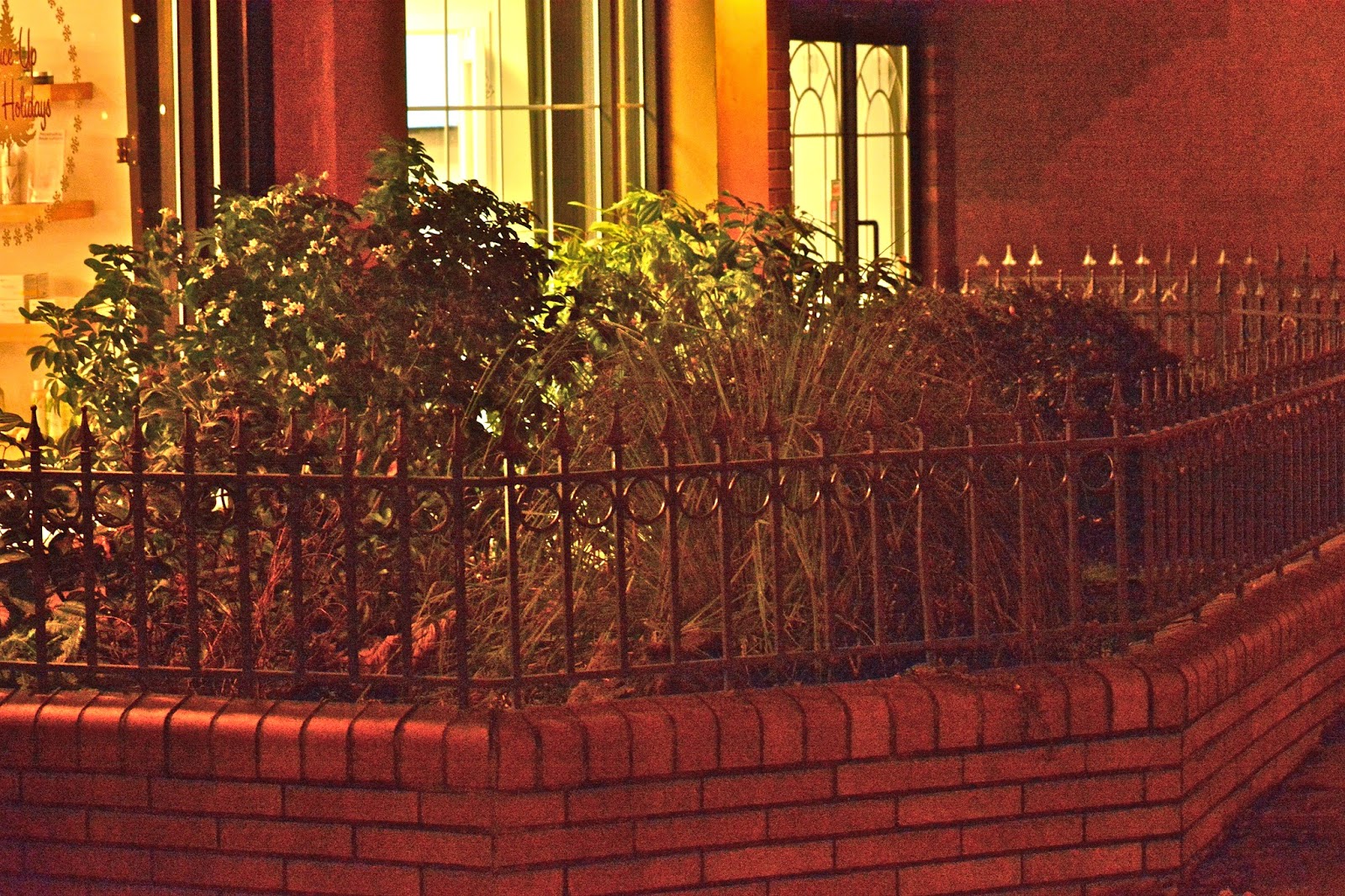 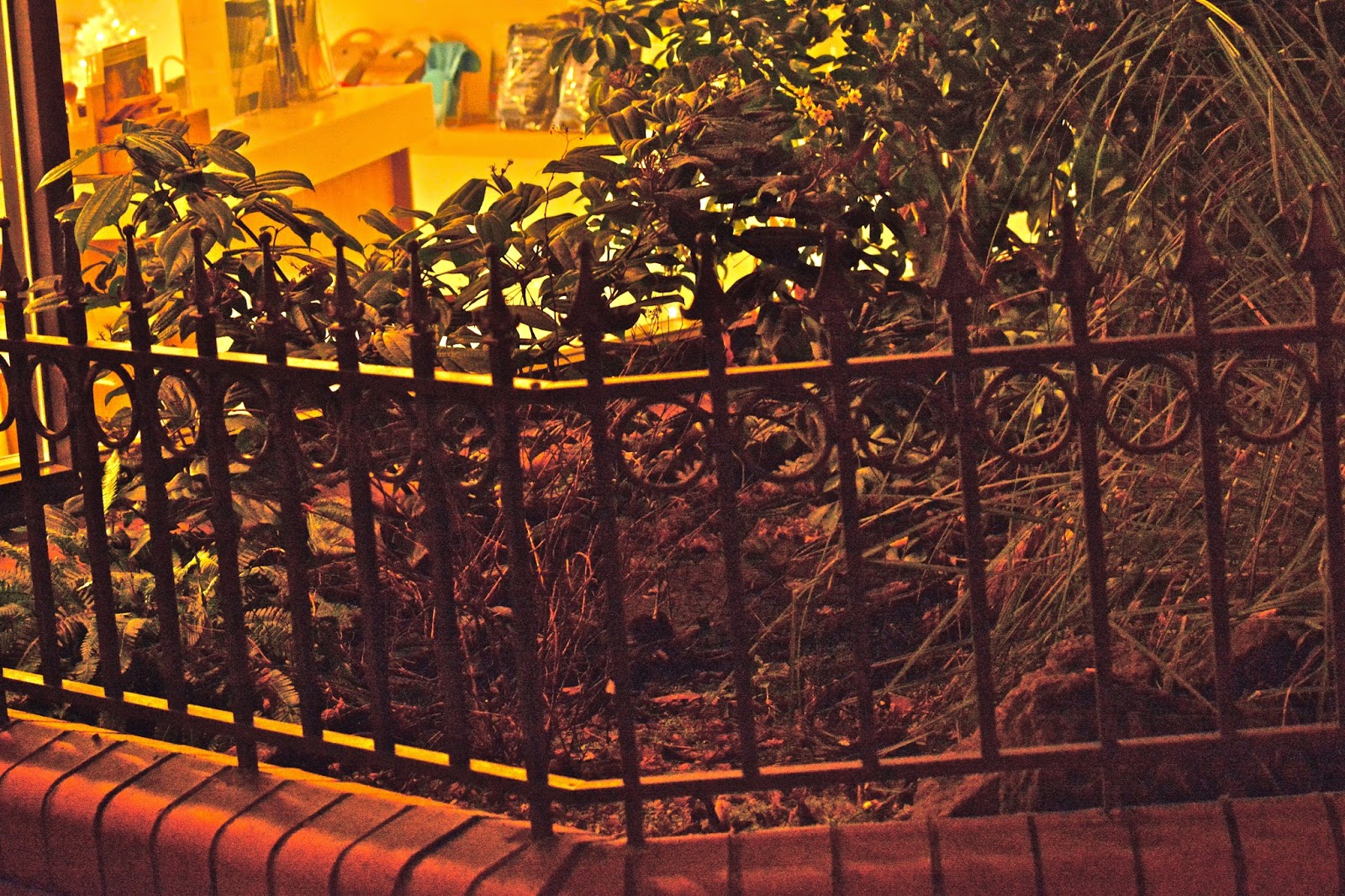 This fence is outside Vancouver Art Gallery.  Hornby Street runs along one side of the gallery.  It is famous for its controversial bike lane.  Many felt that lane to be an extravagance, 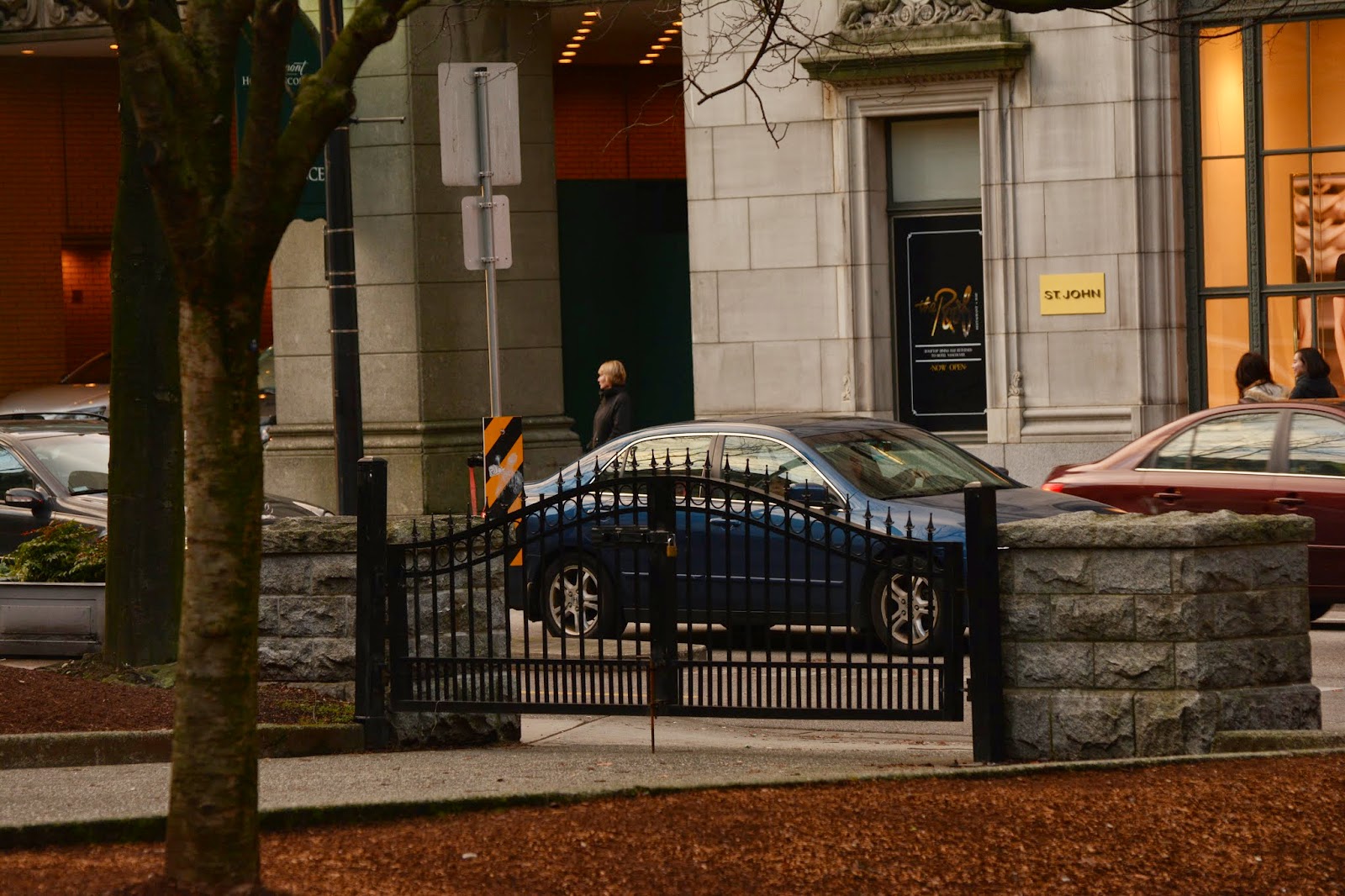 but it is well-used and a very safe way to cycle around downtown Vancouver. 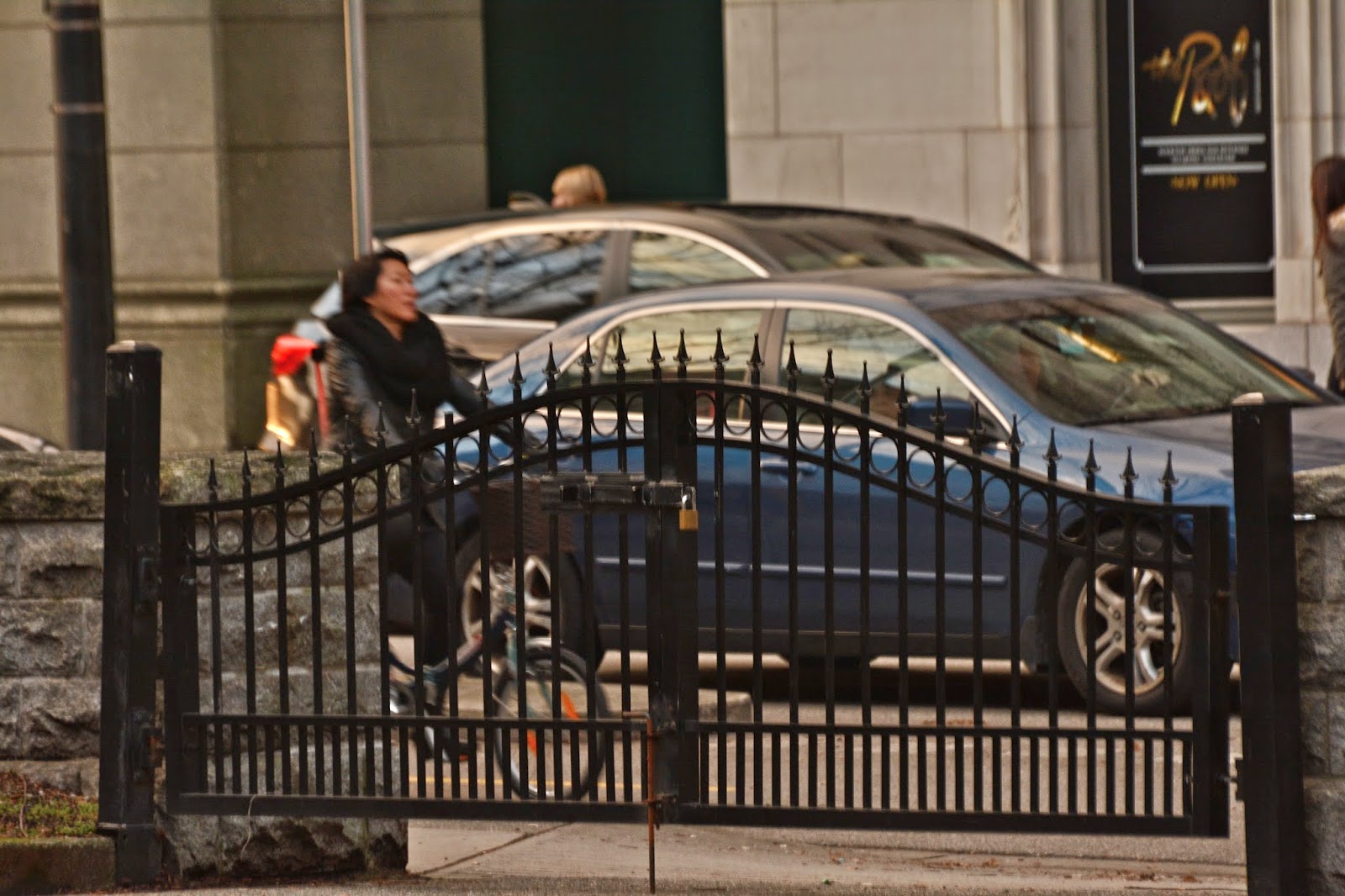 But not so safe that these cyclists should be going without helmets.  What are they thinking? 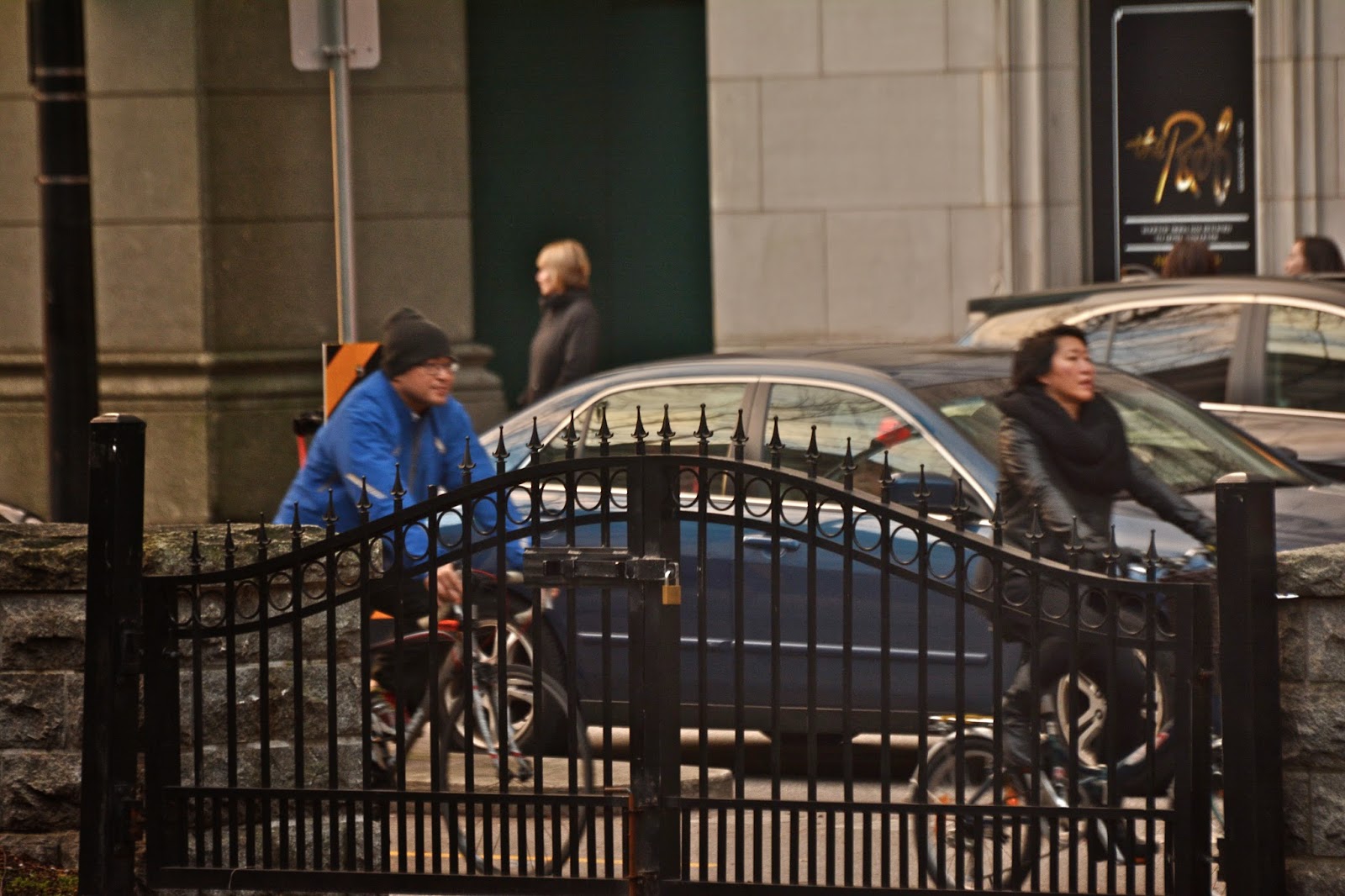 This fence is in Helmcken Park.  I took these flowers in front of it a few days ago. 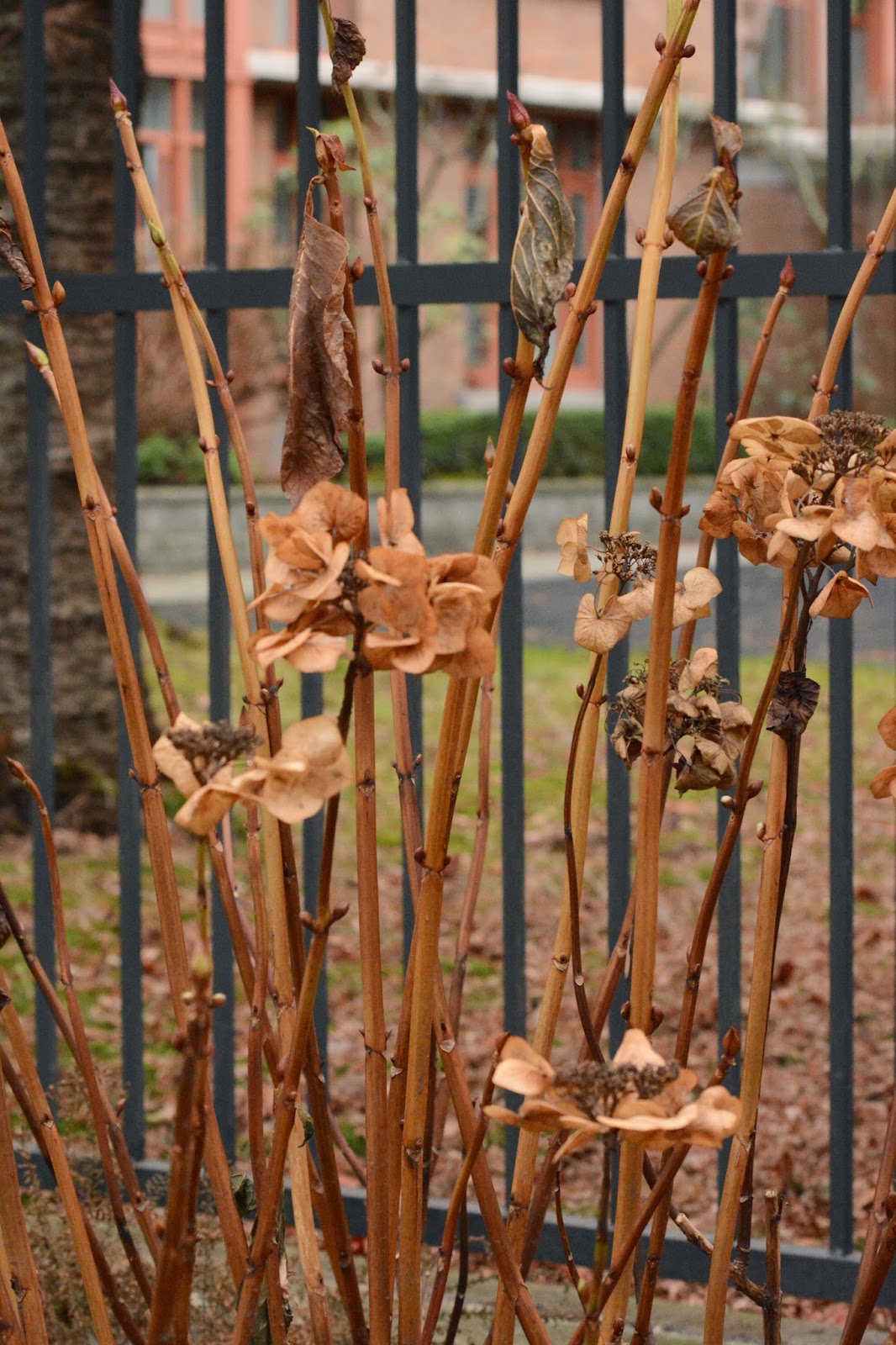 From that same park, you can see a seniors' residence.. 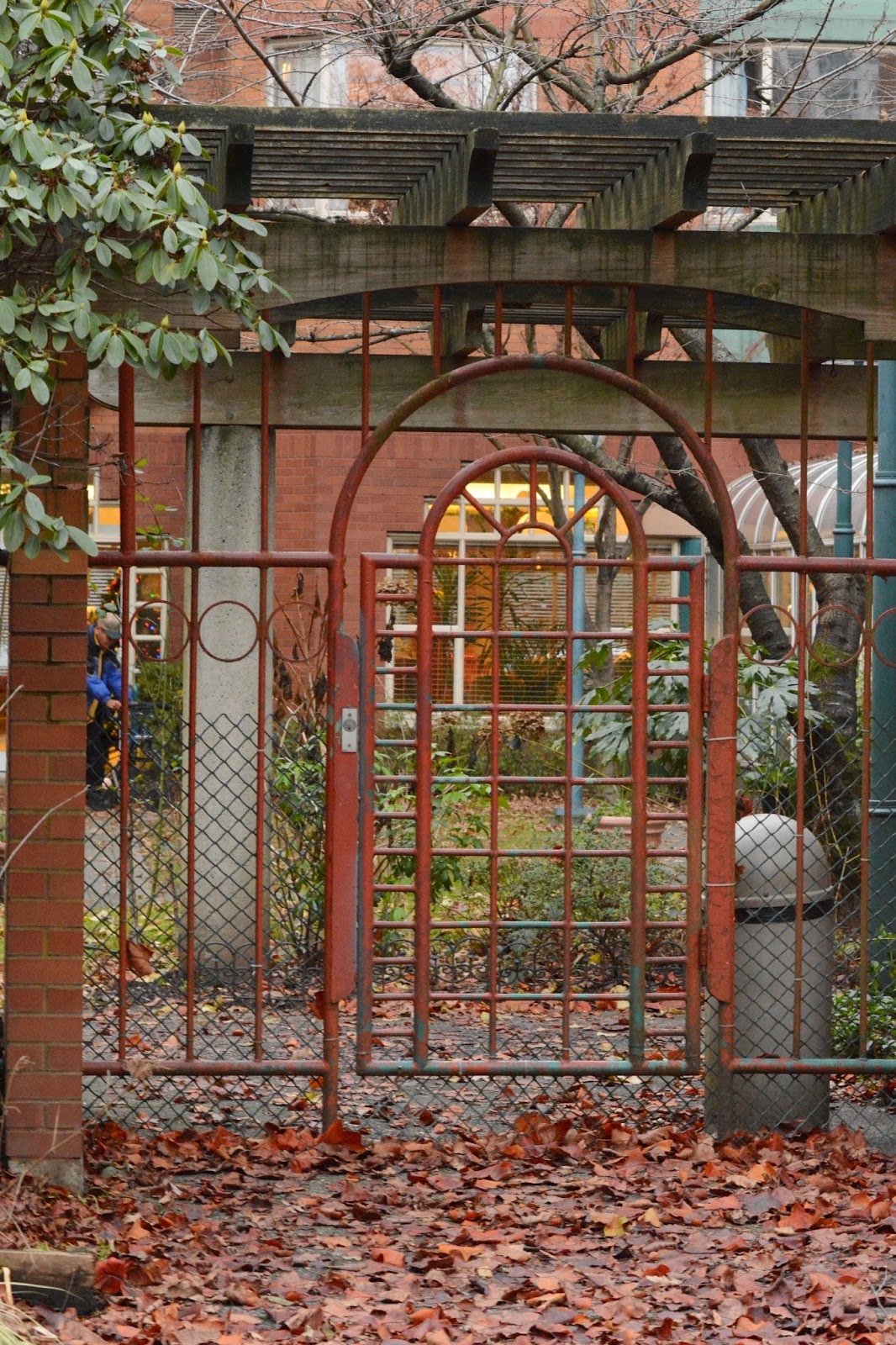 behind this fence.  I'm just noticing the "O" design now.  I guess it's a more common theme than I realized. 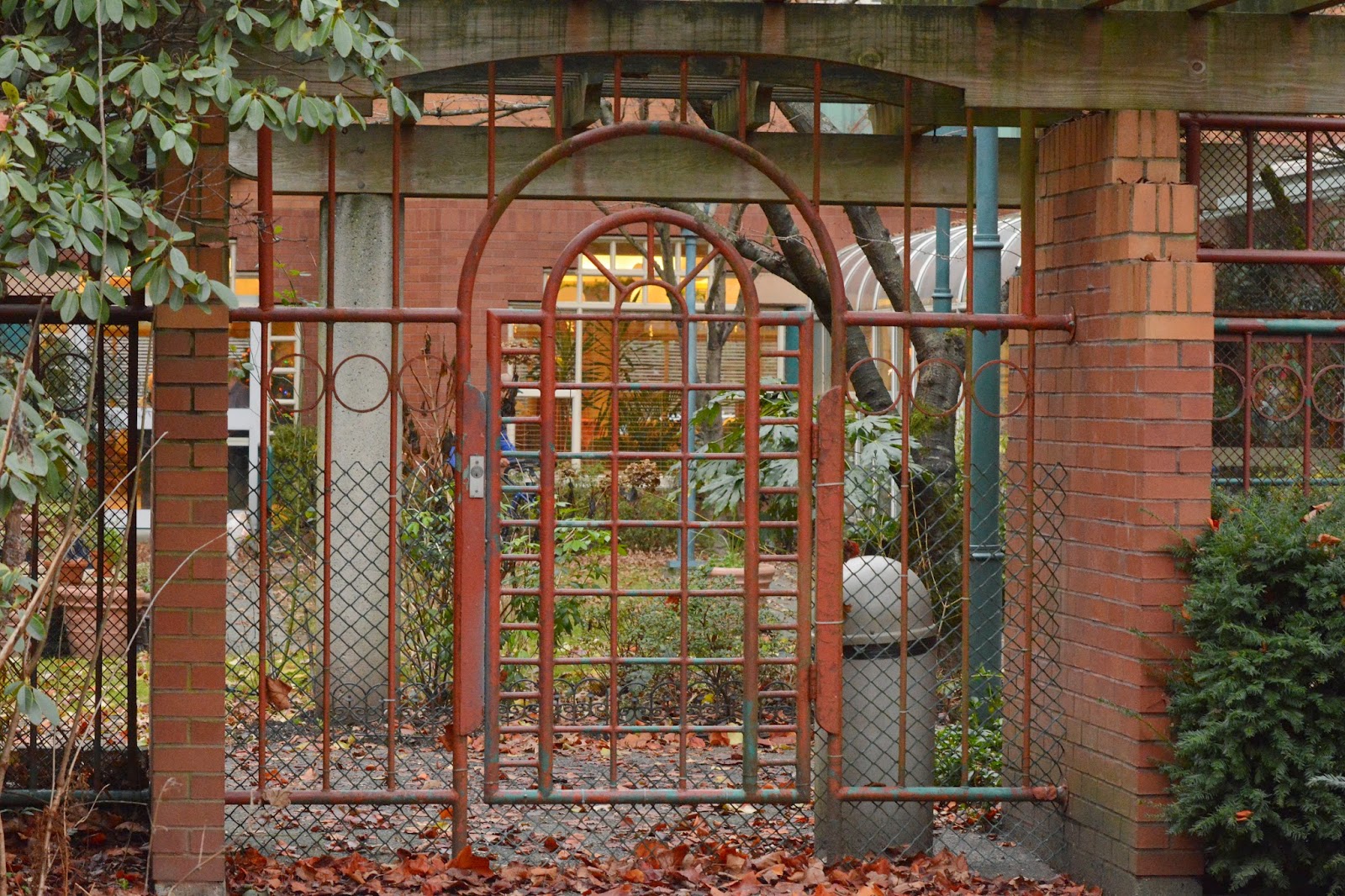 This fence was nearby, maybe near the corner of Helcken and Hamilton Streets. 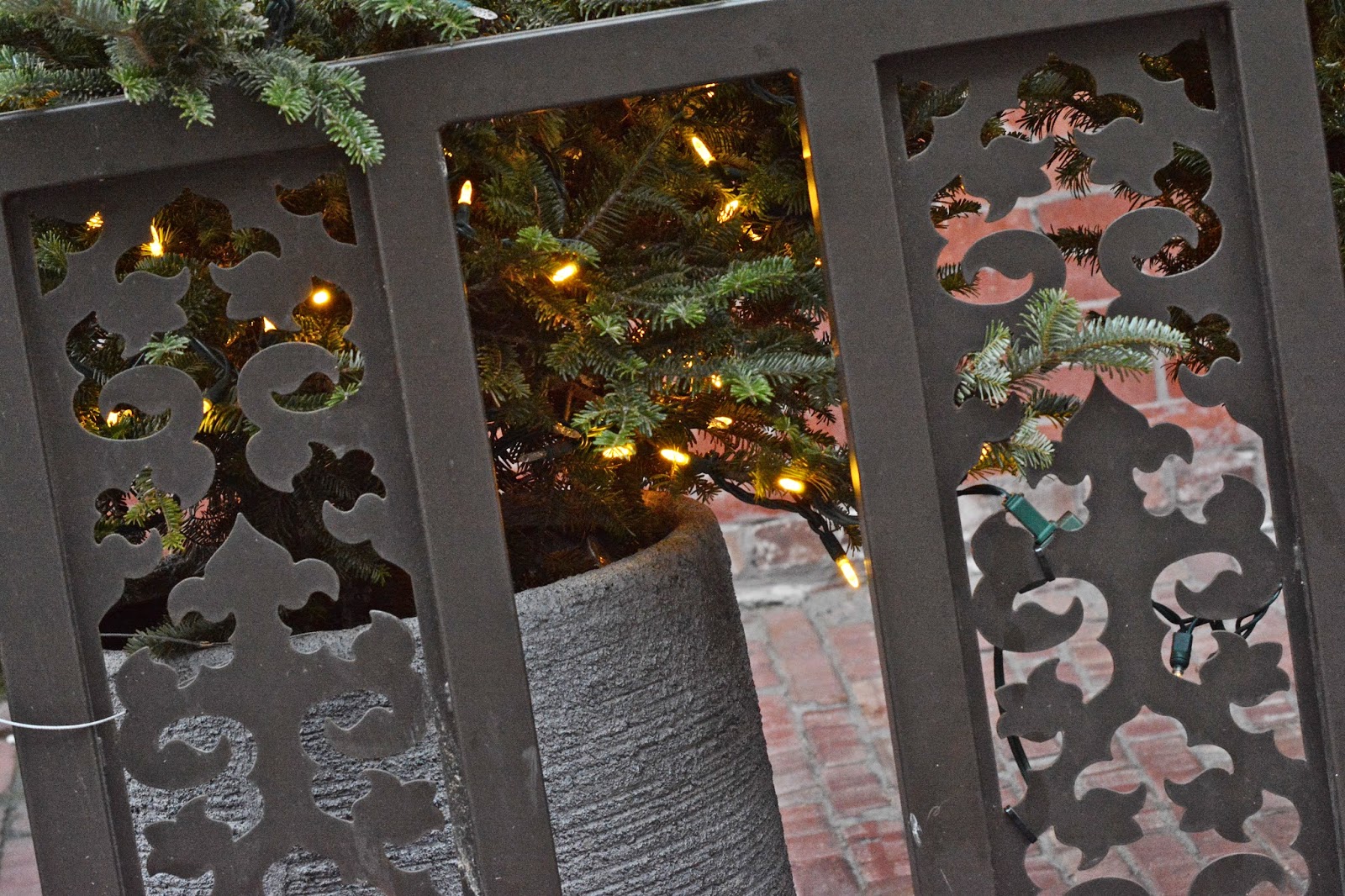 The designs make me think of weight trainers flexing their muscles :) 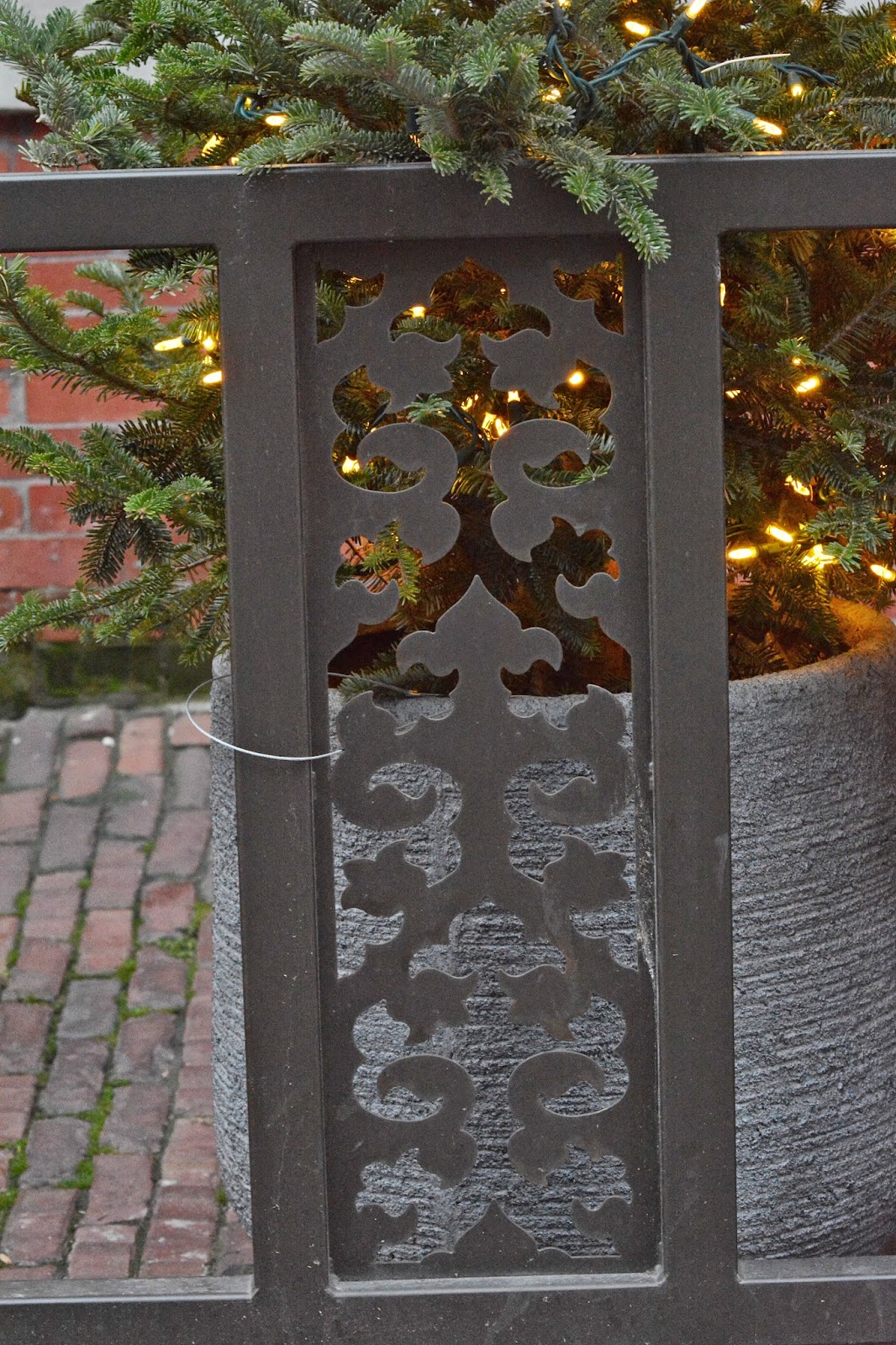 The streets are so narrow outside these fences, you pretty much have to walk single file, and you can see from this photo theys are barely a foot away from the buildings they surround. 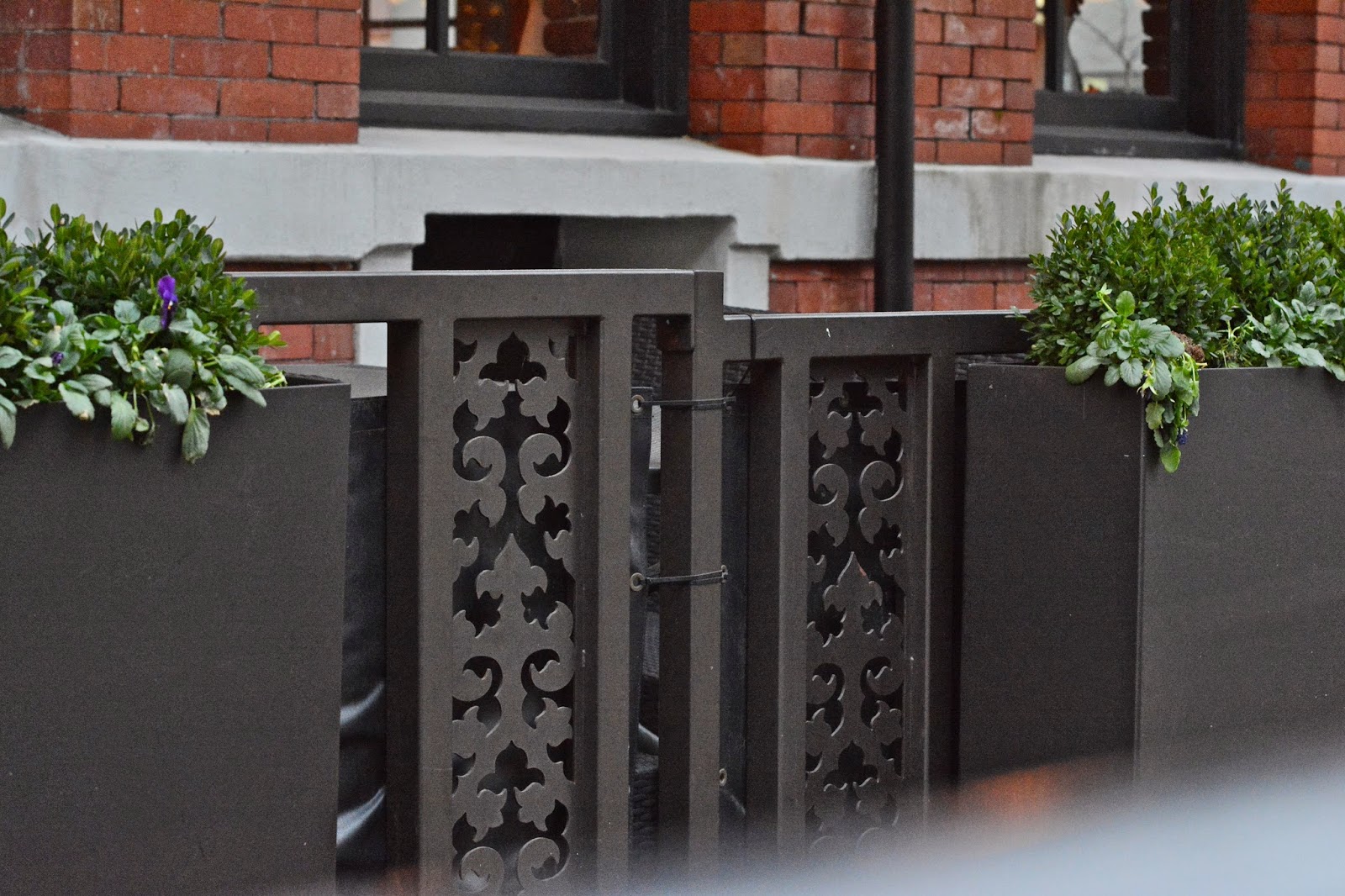 A new chocolate shop has opened up in Yaletown, and we went there a couple of days ago to buy a small gift for someone.  Walking in, it at first seemed pretty run-of-the-mill and I wondered why the fancy sign.  However, this morning I looked into their web site and have learned that they advertise "junk free and fair trade" chocolate. 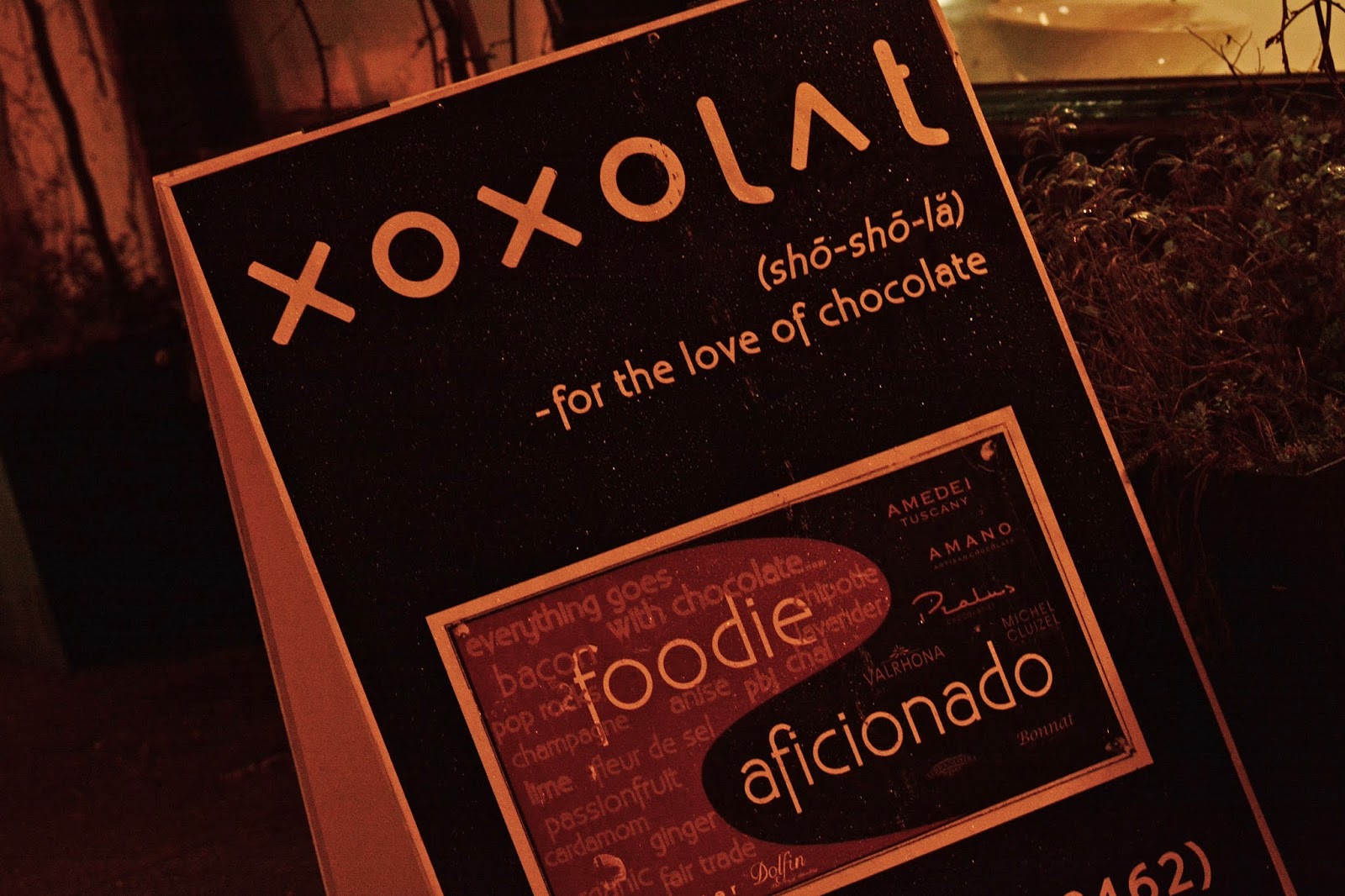 The gift we chose was edamame beans covered by dark chocolate. 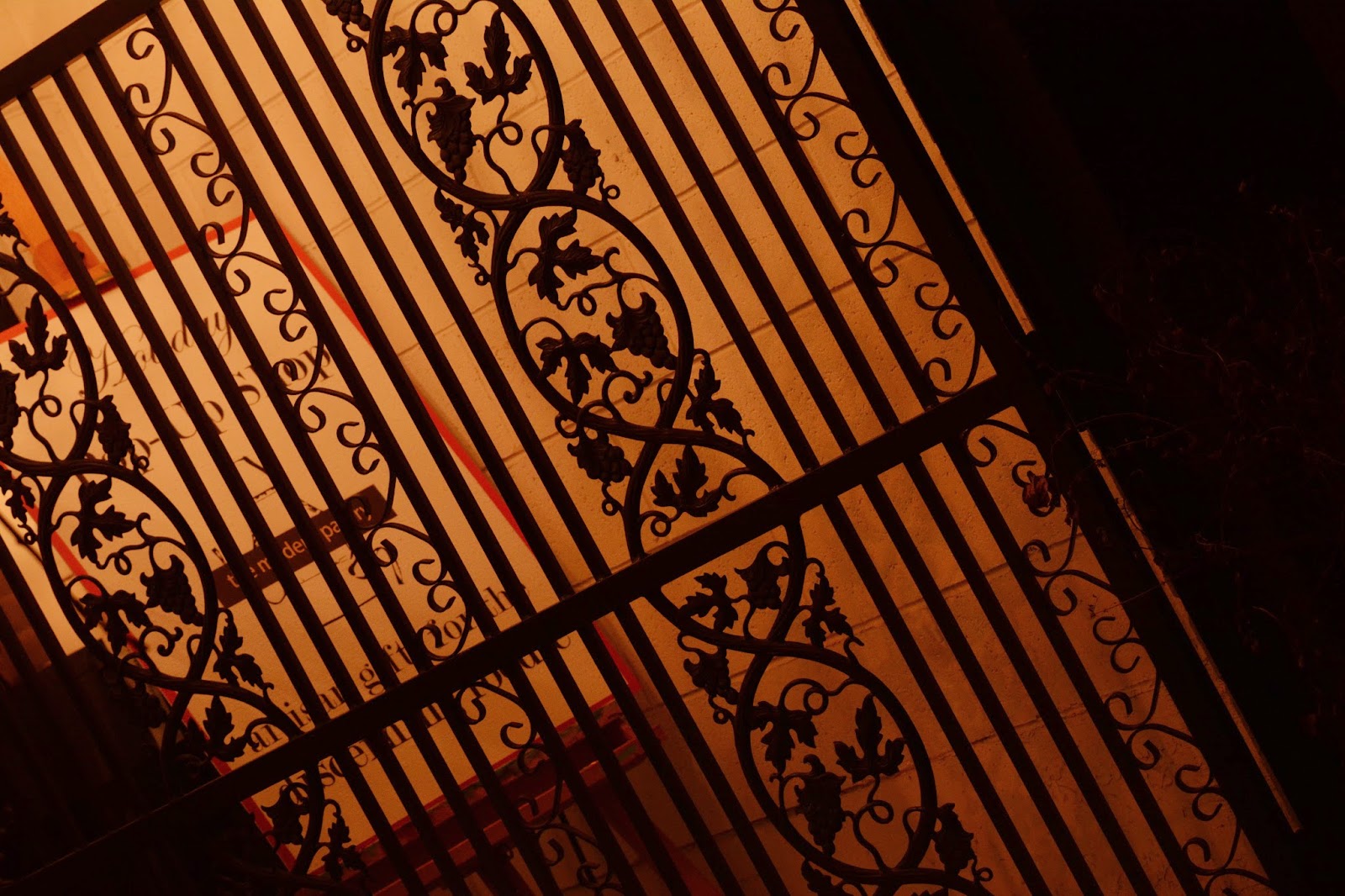 Perhaps, that's why they need an impressive fence to protect their premises :) 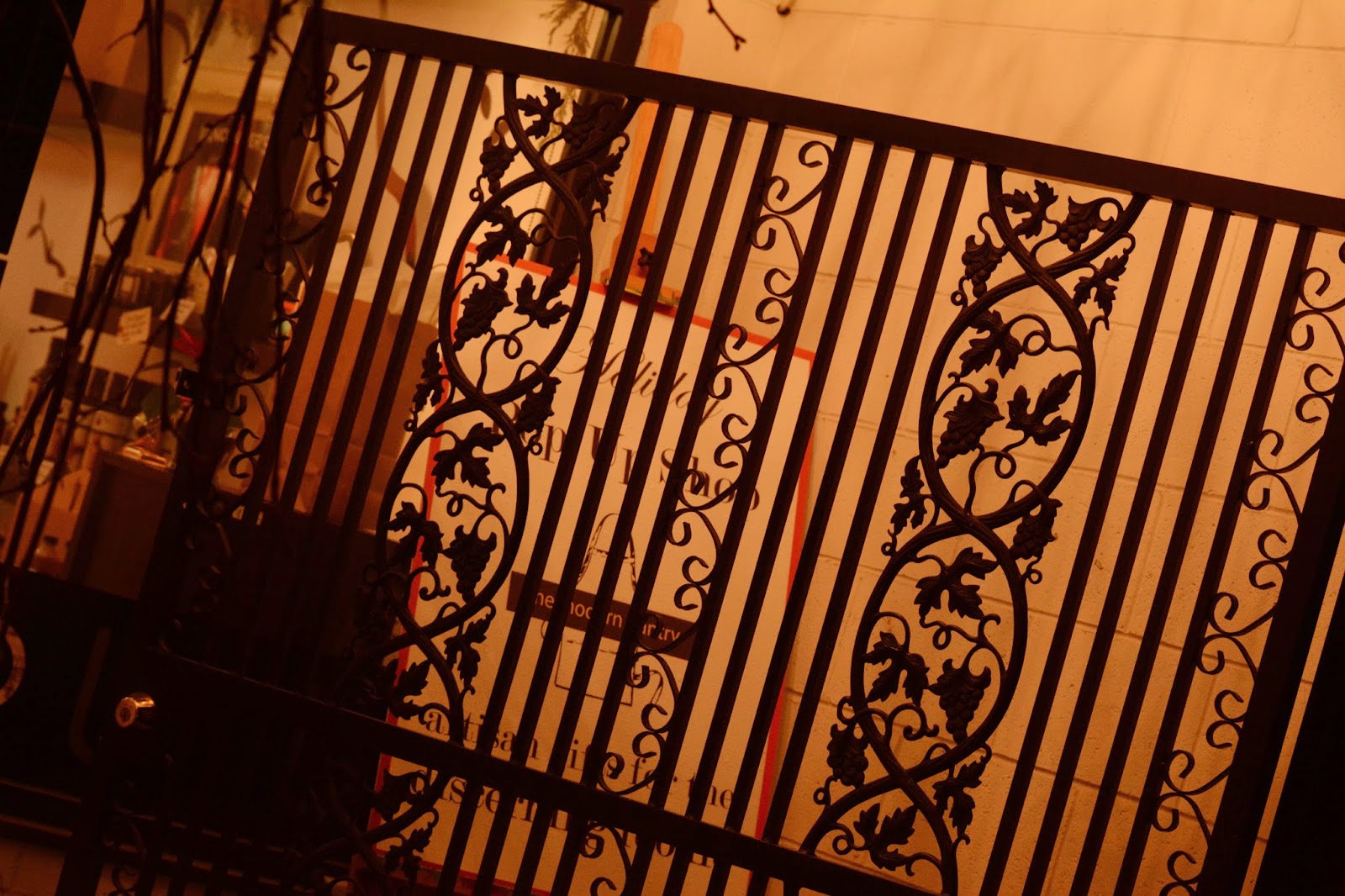 Directly across the street is Ganache Bakery.  Bill and I have never walked through its doors.  Both of us have had "sweet tooth" leanings in our past and paid for that with dental woes, and in my case, with other health problems.  I was the first to discover about five years ago that I felt a lot better after cutting sugar (but not fresh fruits) from my diet.  Now, Bill seems to have come around to that way of thinking as well.  It took a while for me to realize I wasn't depriving myself so much as doing something that my body appreciates.  We are so conditioned to think of sugar as a "treat" that we only realize too late what it does to us.  EightFoldEats, the company that makes sweets (almost all vegan and without sugar and absolutely all without chemical substitutes) has been a great friend to us. I was looking at its web site this morning and found this article about Weston A Price, under the heading Diet and Dentistry.  Well worth a read if you feel so inclined. 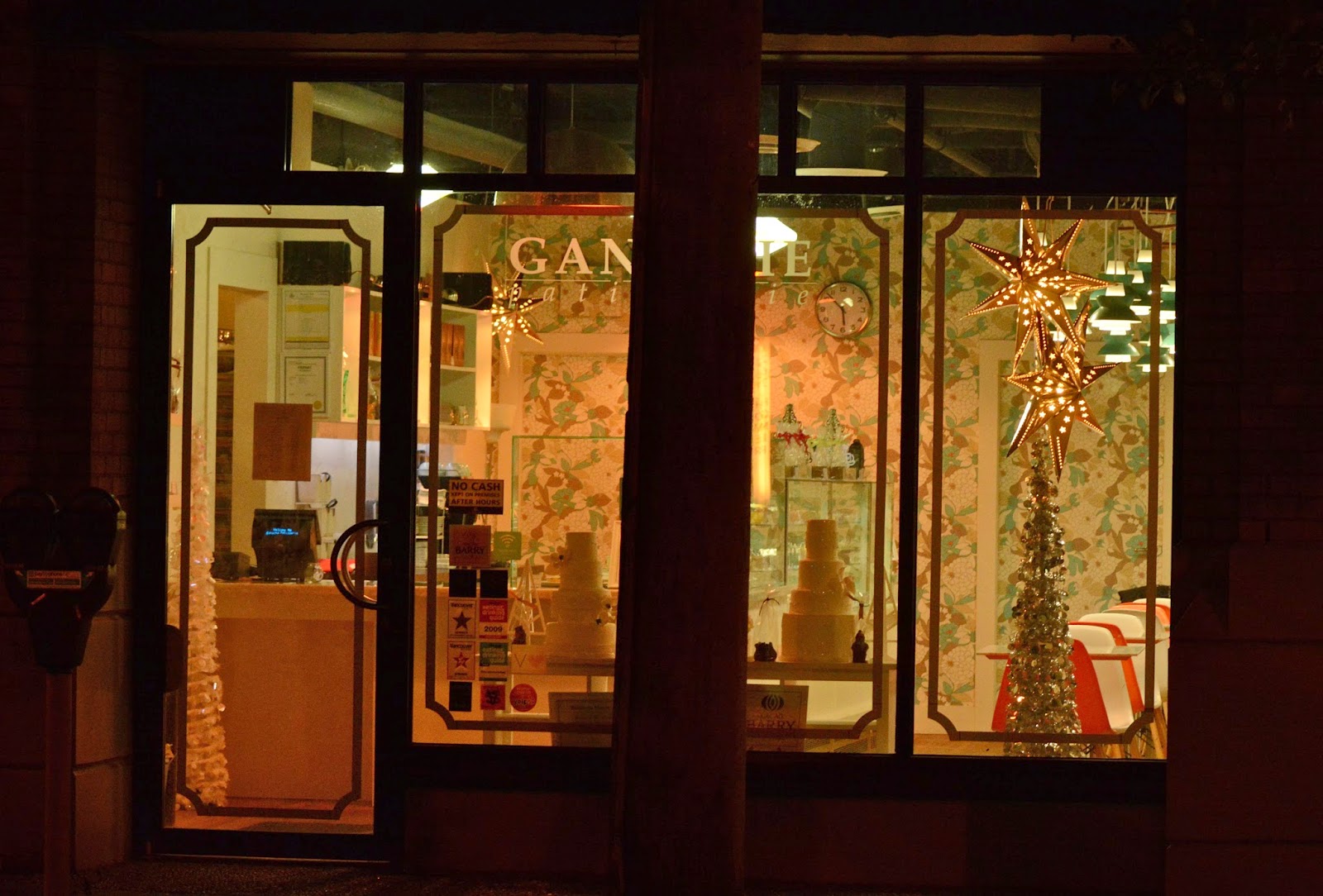 As you can see, I'm straying a bit from the "fences" theme, but not totally :)  As we stood in front of the just photographed fence, facing Ganache Bakery, Bill and I both admired these stars and the warm light coming from Ganache's window. 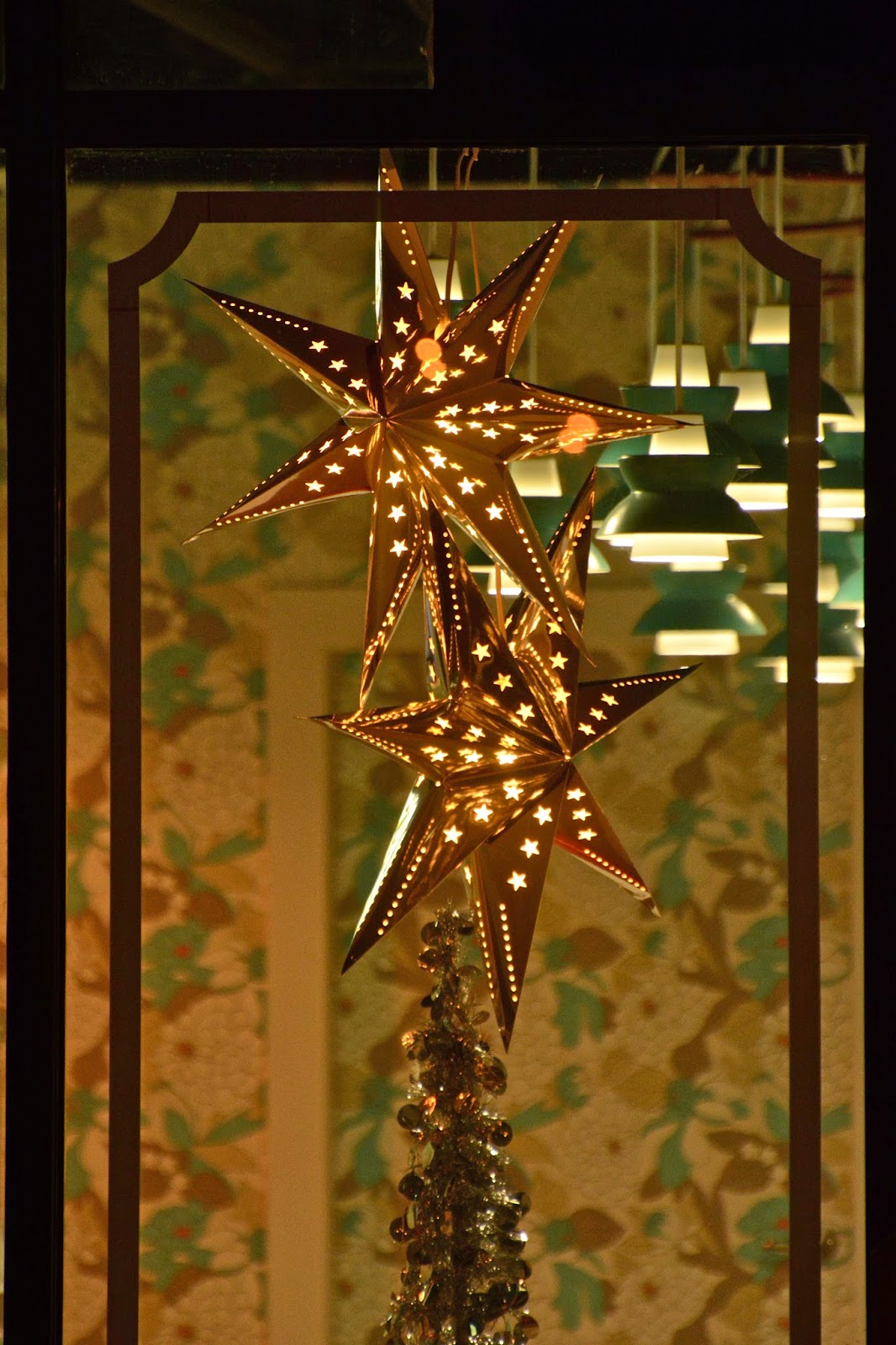 And that brings us to yesterday morning, when I rode my bike across the Cambie Bridge to the dentist's office.  The light was just coming up, and the view from the bridge of Science World and surrounding city lights was spectacular.  Lots of fences in there as well, 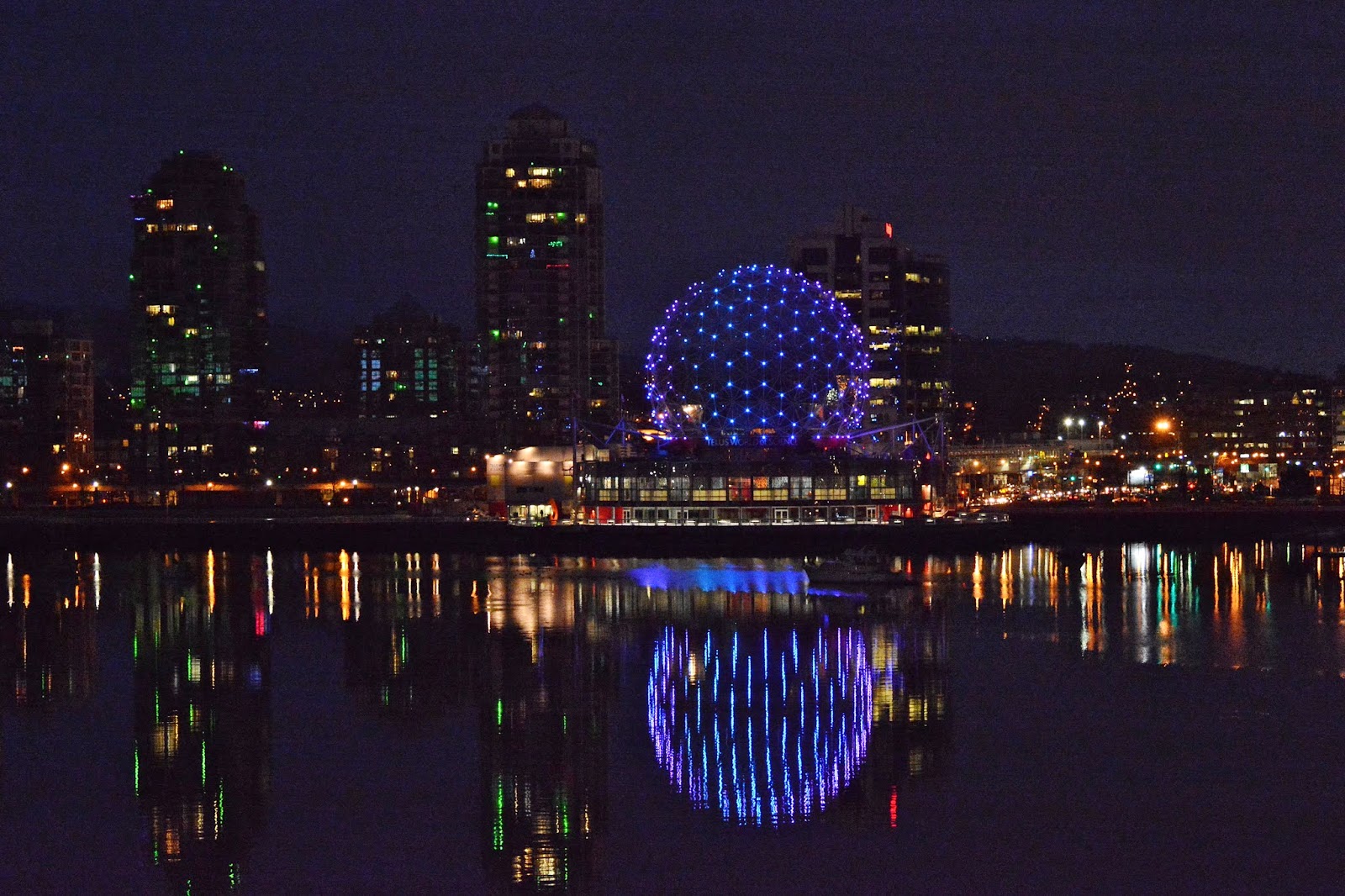 though, even with this close-up, you'll need a bit of imagination to see them. 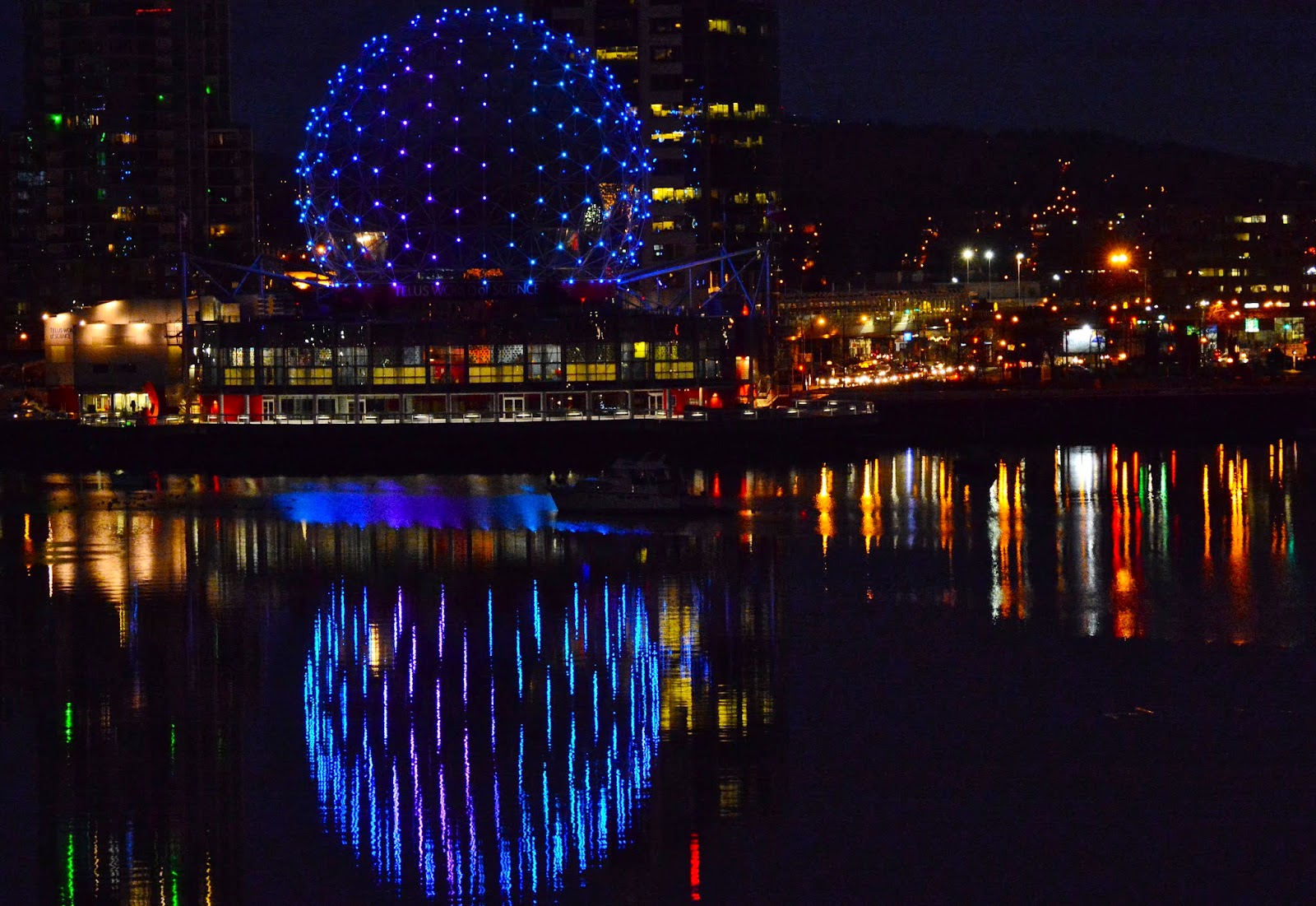 I wasn't allowed to ride my bike home after the appointment, but put it on the skytrain and was home in a jiffy.  Sweet Bill commiserated, as he does without fail whenever needed, and that in combination with some pain meds, was the magic to make me feel much better a couple of hours later.  No fence in this shot, but it was part of my day, a good one after all.  Yes, you guessed it.  We were at Harrison Galleries, enjoying our EightFoldEat cookie (no chewing required for my regular choice..  it melts in your mouth), completing a crossword and even a Sudoku.  Just before we left, I asked Bill to stand in front of this painting by Montreal artist, Victoria Block. 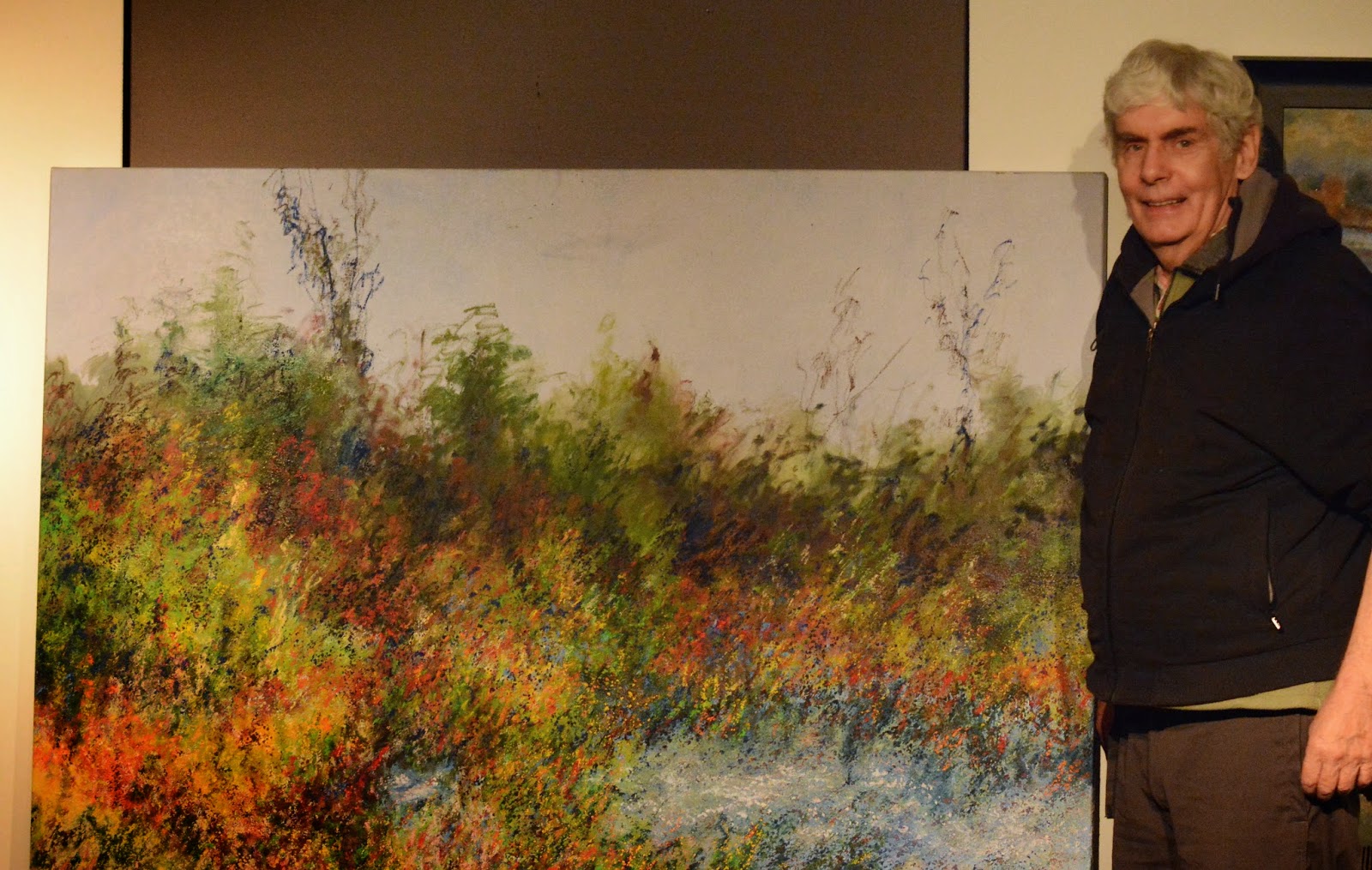 Then, it was Black Jack's turn.  That's Bill's hand in the top right hand corner indicating a "sit-stay" request.  She looks at me as if to say, "Will it earn me a treat?" and.. 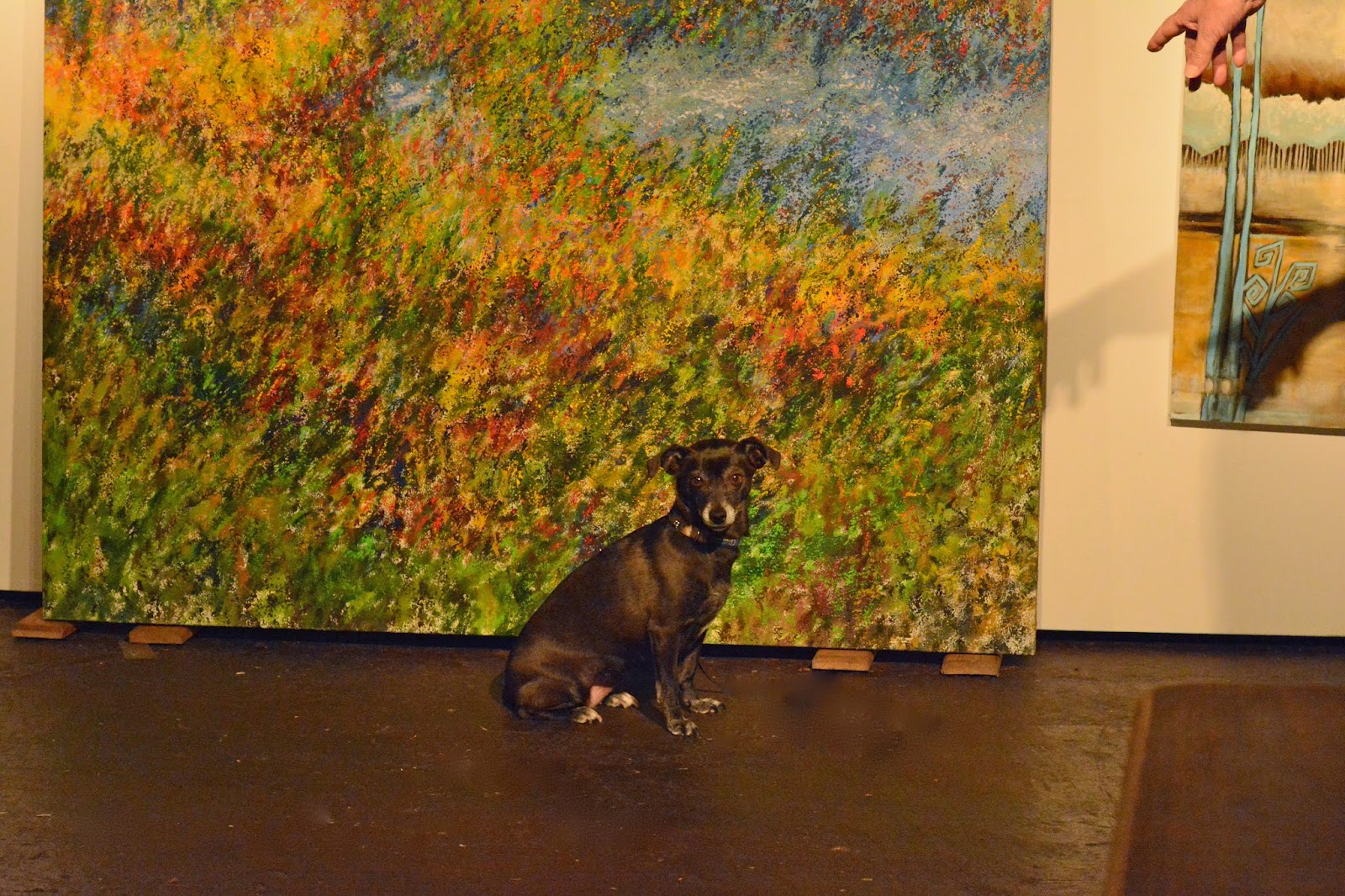 considers her options.  Could there be something edible on the floor?. 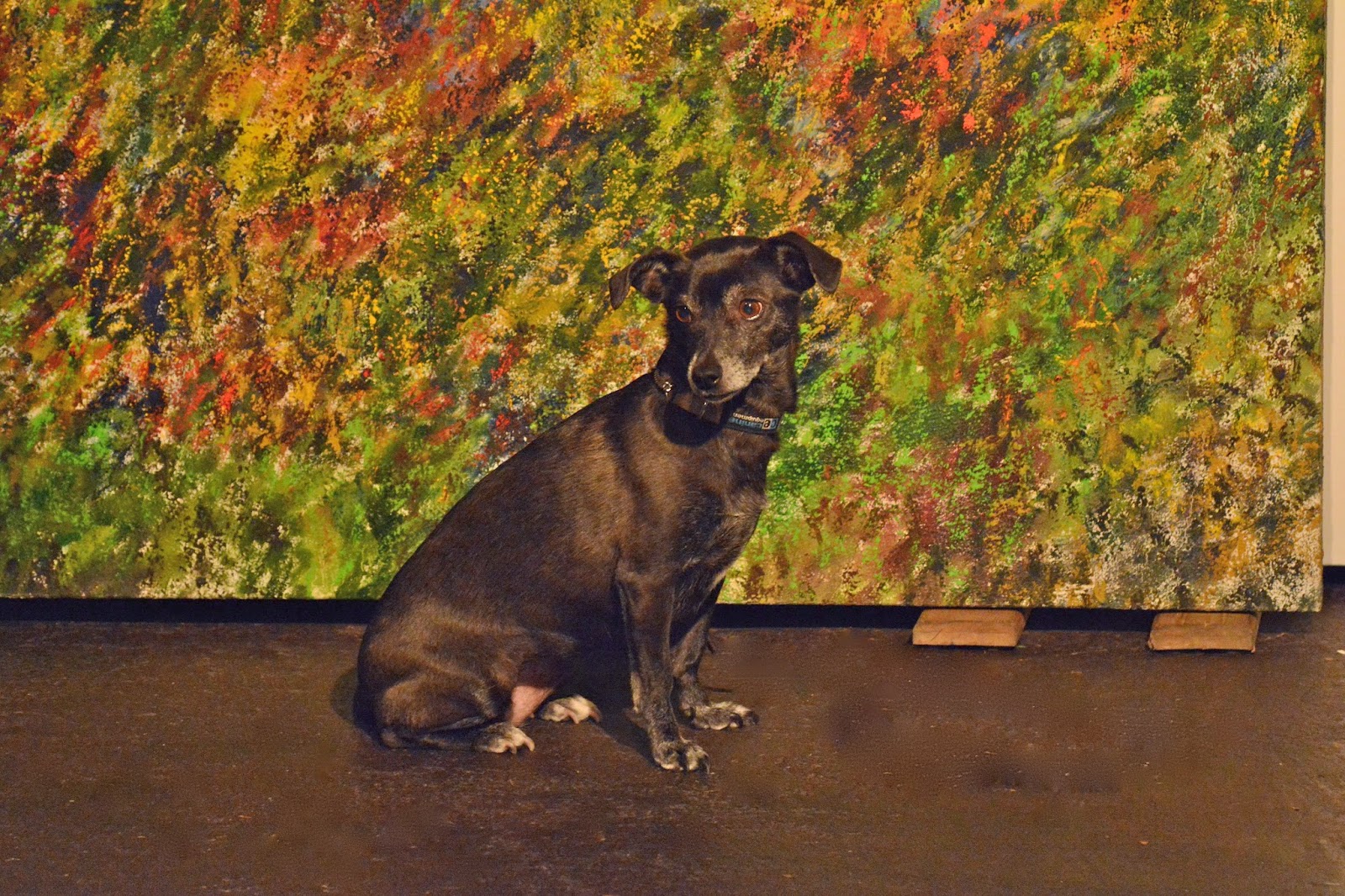 She focuses once more on Bill and remains firmly planted, though.. 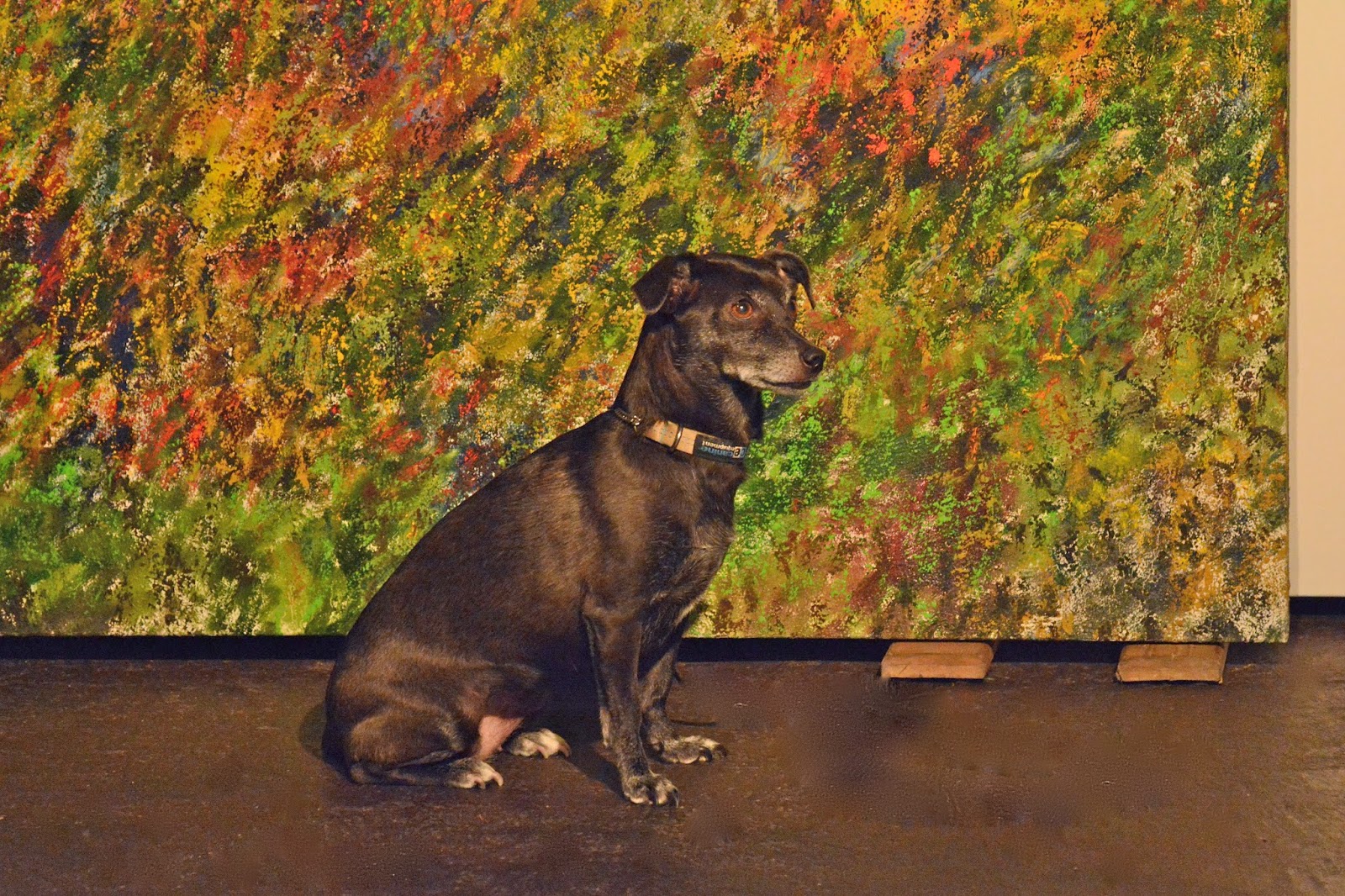 she considers it fair game to extend her neck to its amazingly full length. 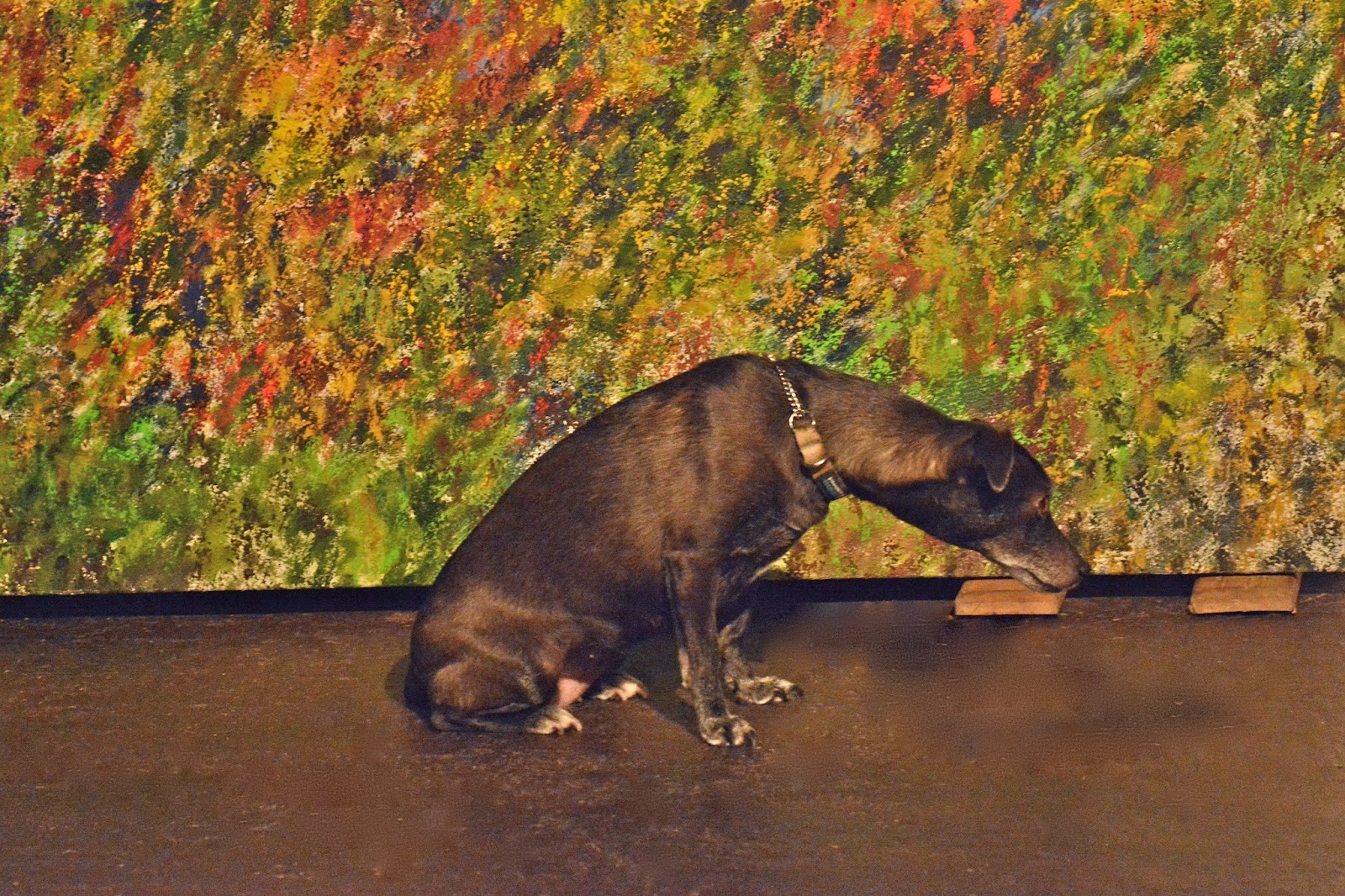 And to close, an art piece by Kenna Graff that I like very much, and that, to my mind, has fence-like structures within it.  Thank you, Bill, for all that you did and do to make life good in spite of my fears, thank you, Phyllis (I'll be emailing you today), thank you, Sherrill, for making me laugh out loud (I may just have to share that picture of you with the Rudolph nose), thank you Theresa (check out those fences, people..  you will be amazed!), and thank you, dear readers.  May each one of you have a very happy day! 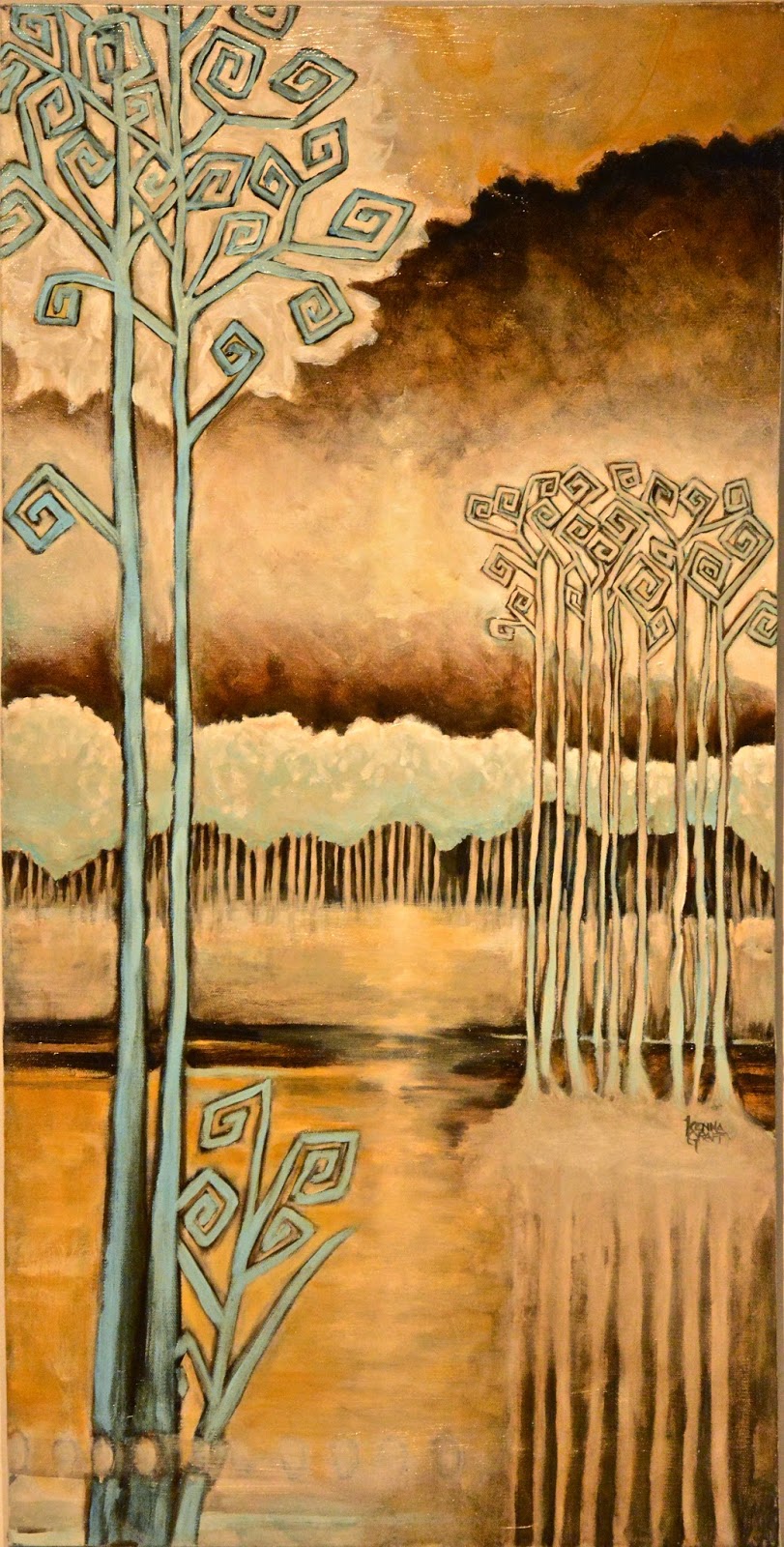