Warm tones on a December evening.

When do golden browns and yellowy copper tones become orange and at what point does orange cross over the line to red?  I'm not quite sure, but I thought there was enough of an orangey glow to this post to link it up with Orange You Glad It's Friday.  Many thanks to Maria, the host of that fine meme.

We were walking along Hamilton Street last evening when we heard happy music coming through the open doors of Goorin Bros hat shop.  Bill and I tend to resort to hoods, helmets and in the summer, a baseball-style cap when our heads need covering. Oh..  and I confess to wearing a plastic rain-hat sometimes.  They sell them at the dollar store.  I will probably never share a photo of that on this blog :)  That said, there was something really inviting.. 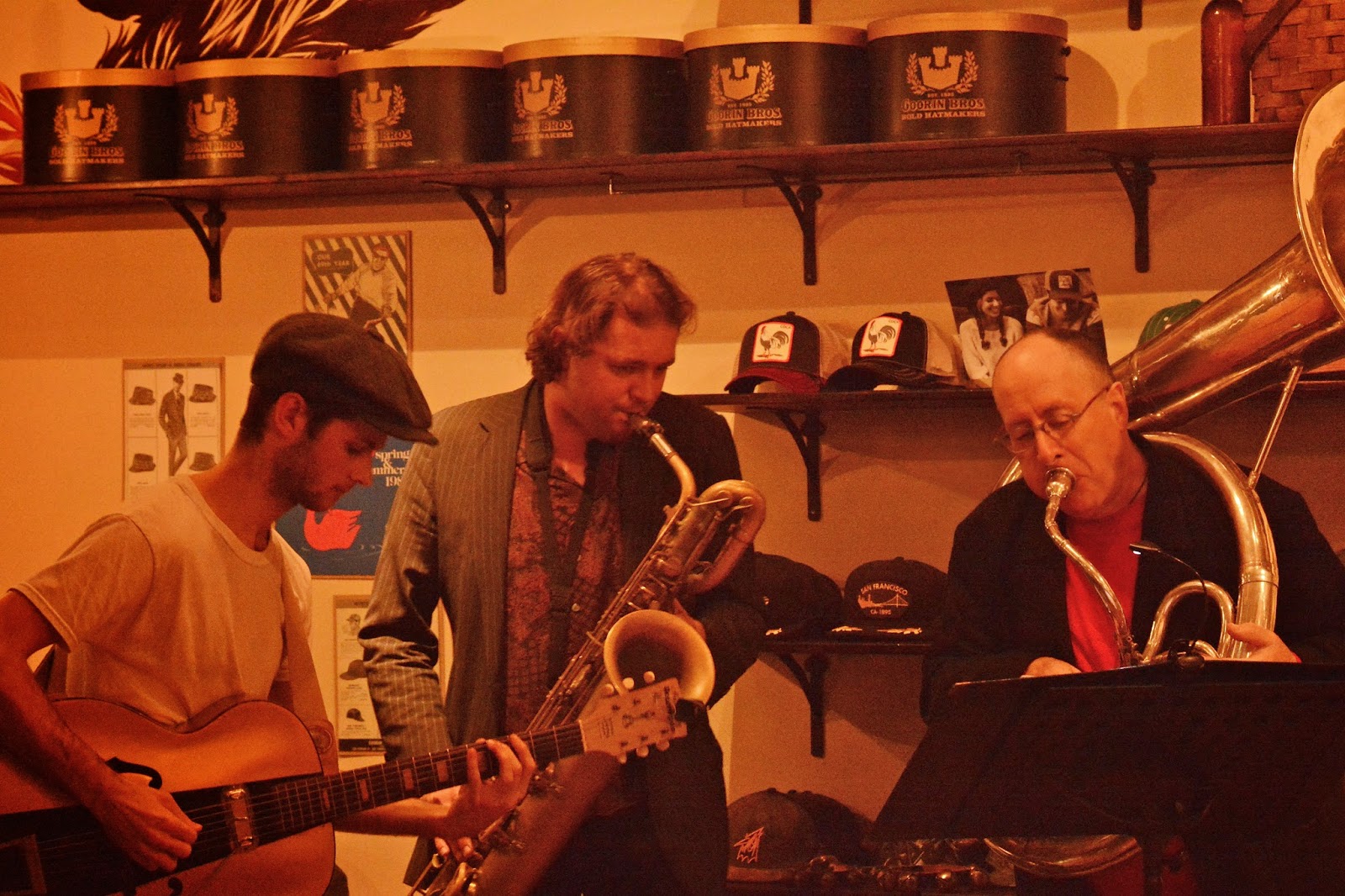 about the warmth and friendliness of a beautiful hat display, with jazz.. 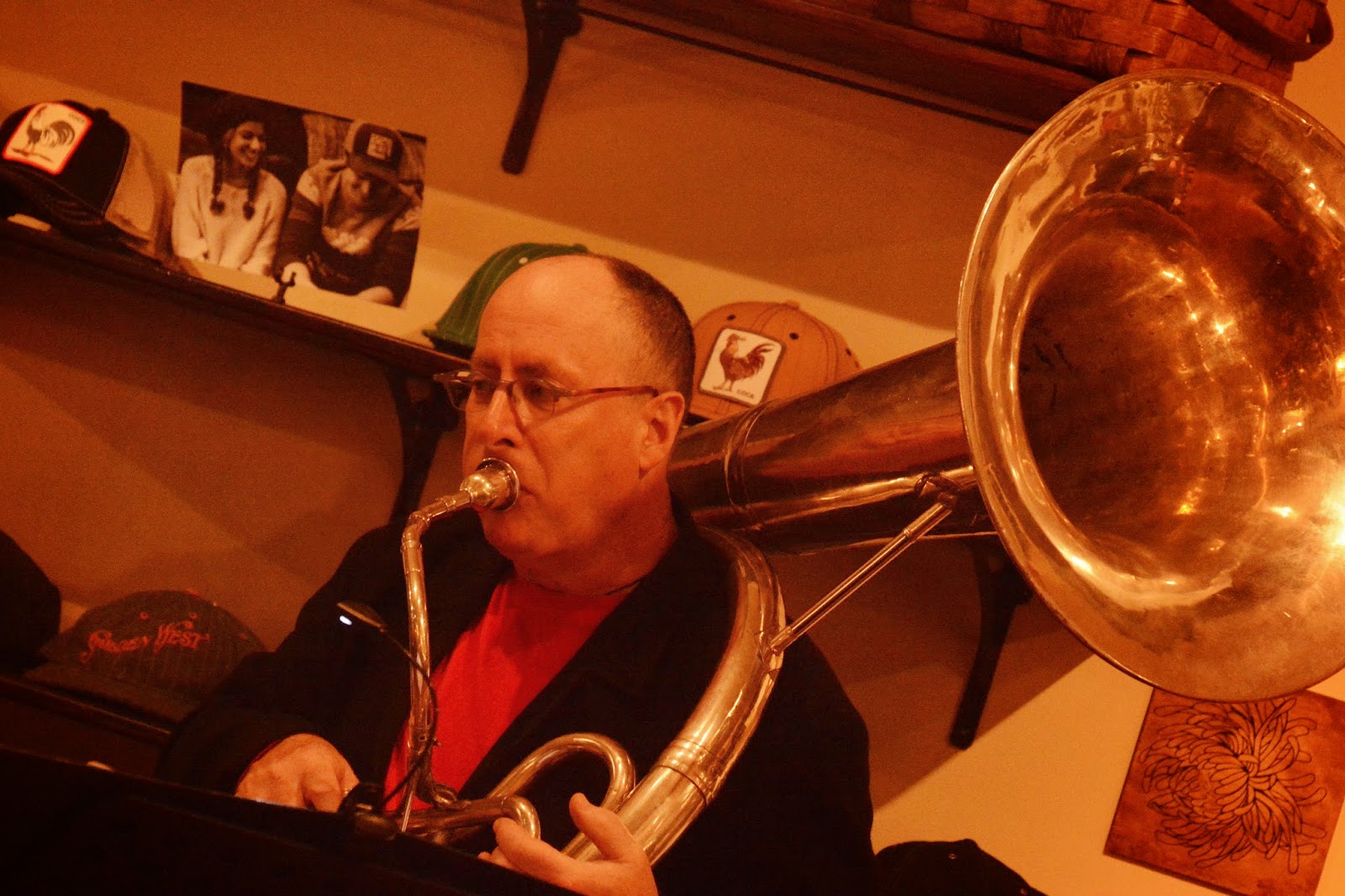 bringing life and energy to everyone who passed by on Hamilton Street.. 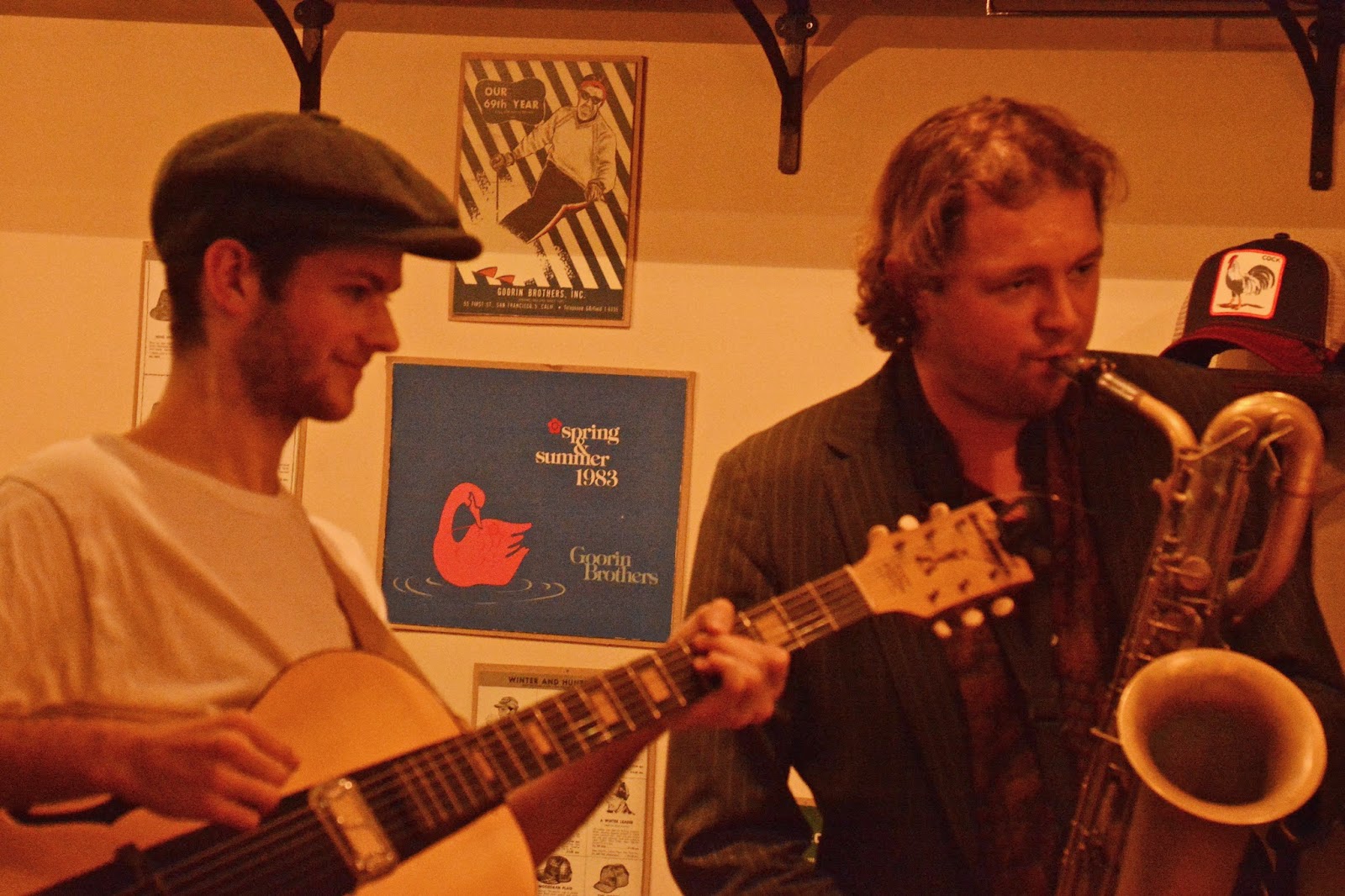 on a damp December evening.  Only one of the musicians was wearing a hat (see above) when we walked into the store.  The saxophonist reluctantly tried a baseball cap but.. 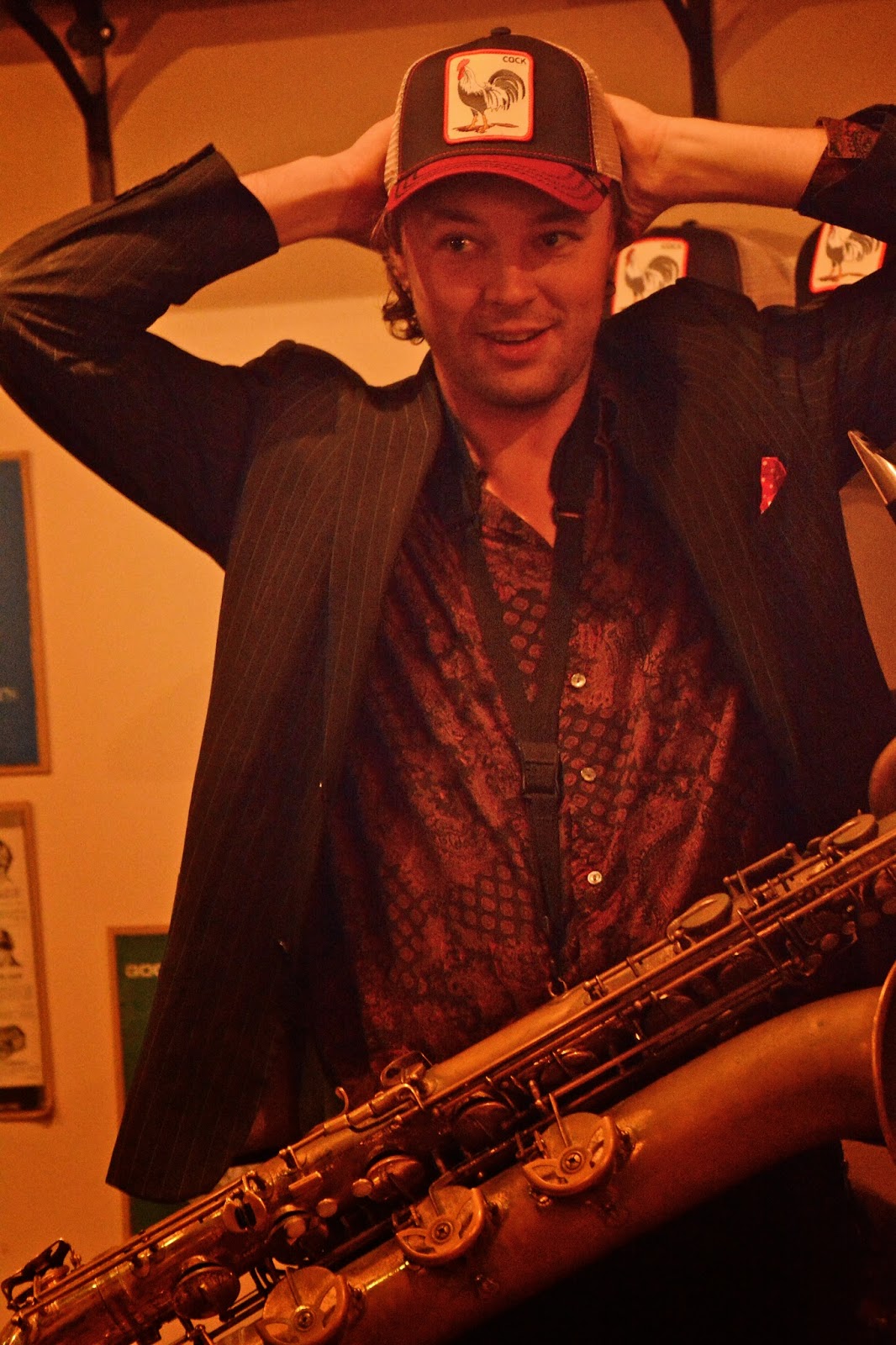 his preference was for the one below and we all agreed it was perfect! 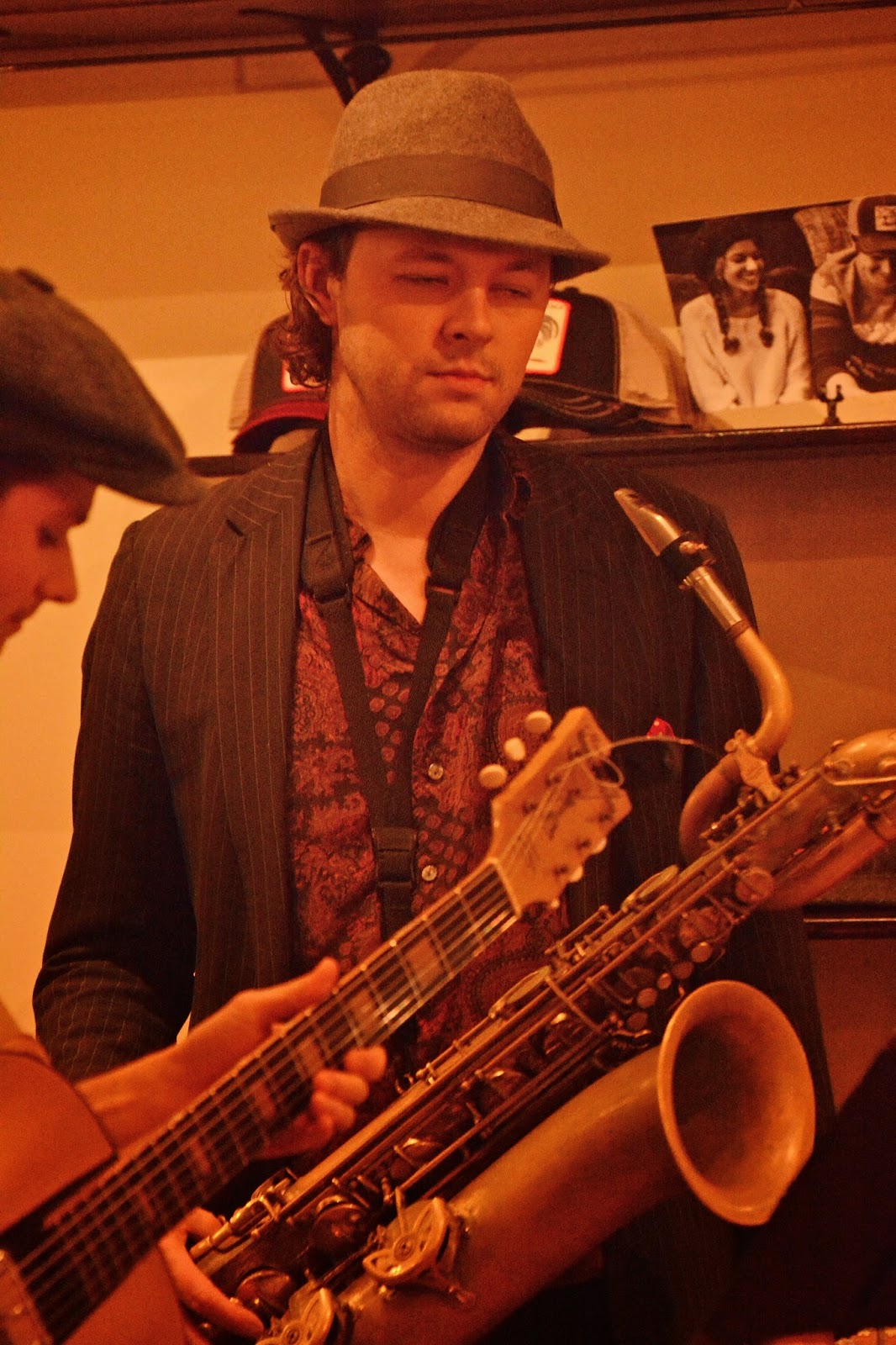 The sousaphone player found himself a hat too.. and then, 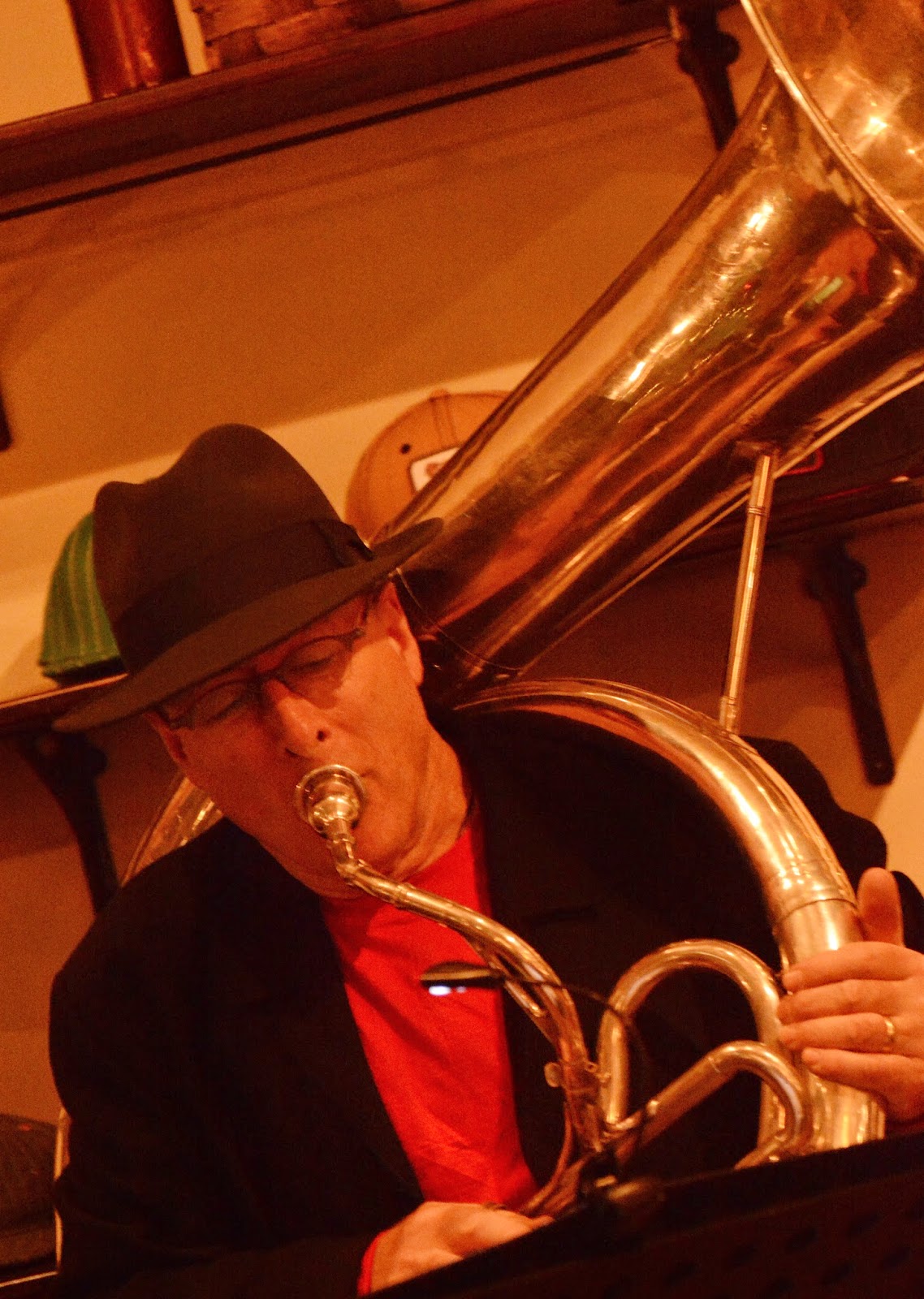 the energy, already in good form, started to really heat up. 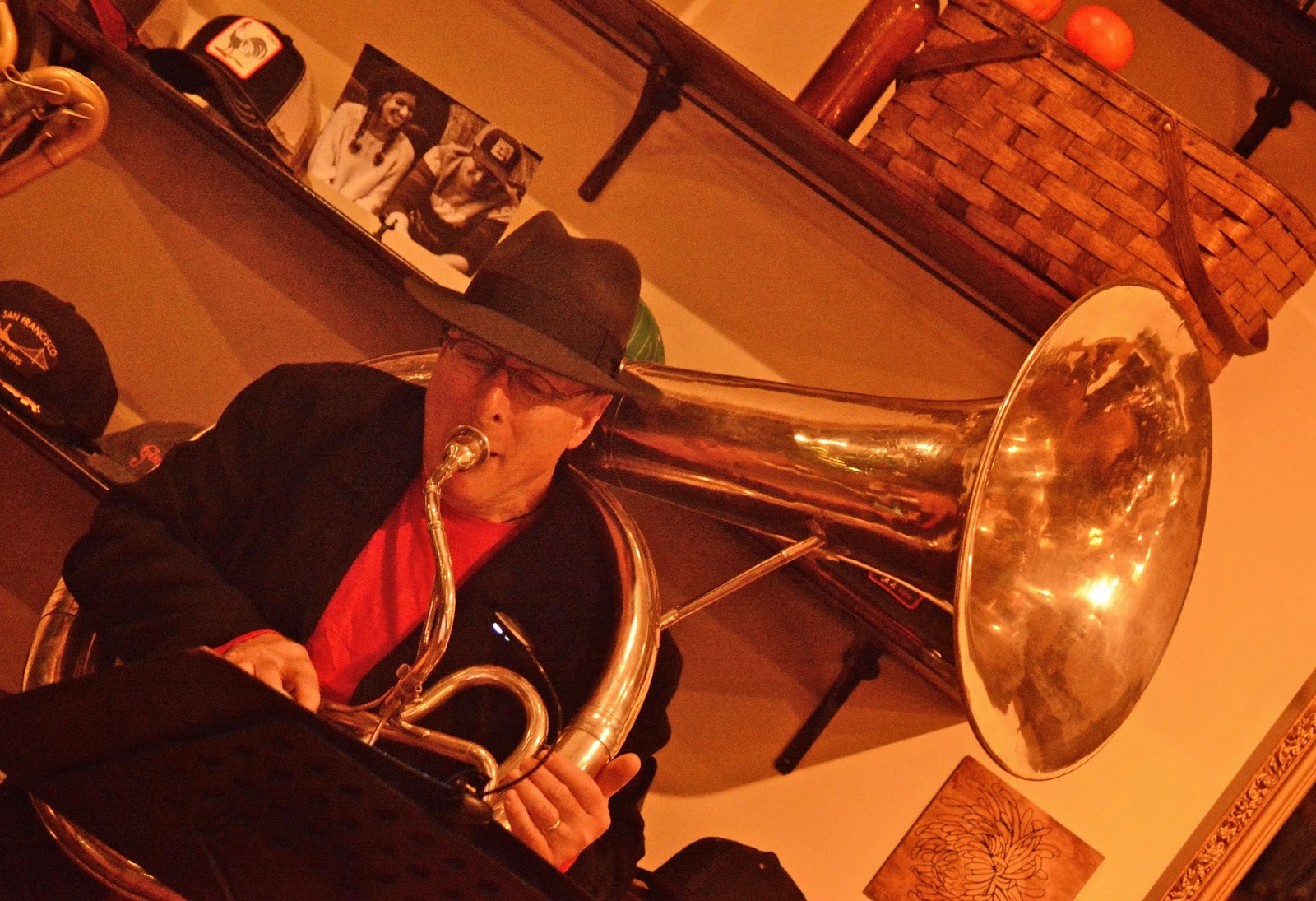 If you're going to shop, 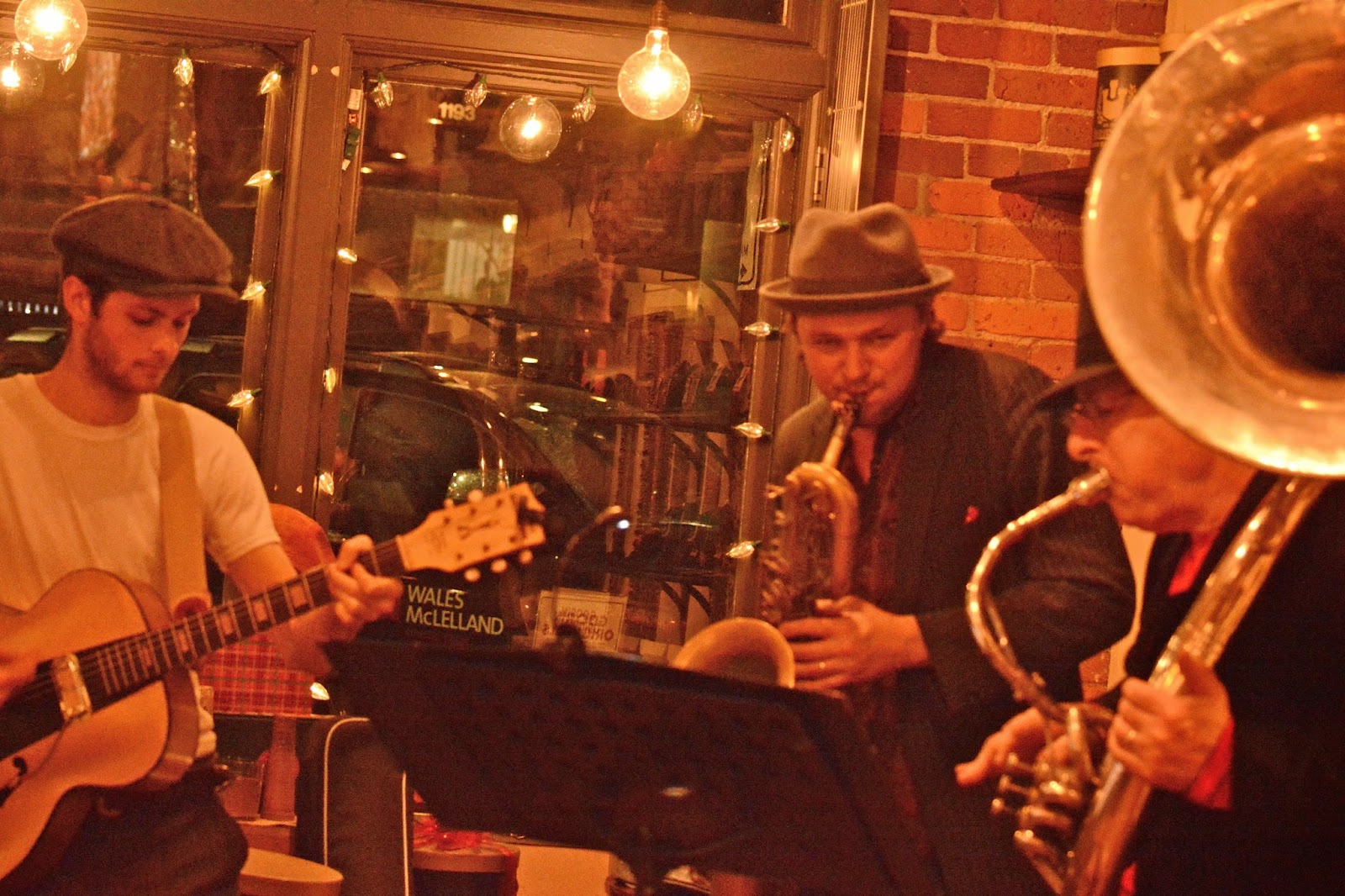 it is my opinion that musical accompaniment goes a long way to sweetening the task. 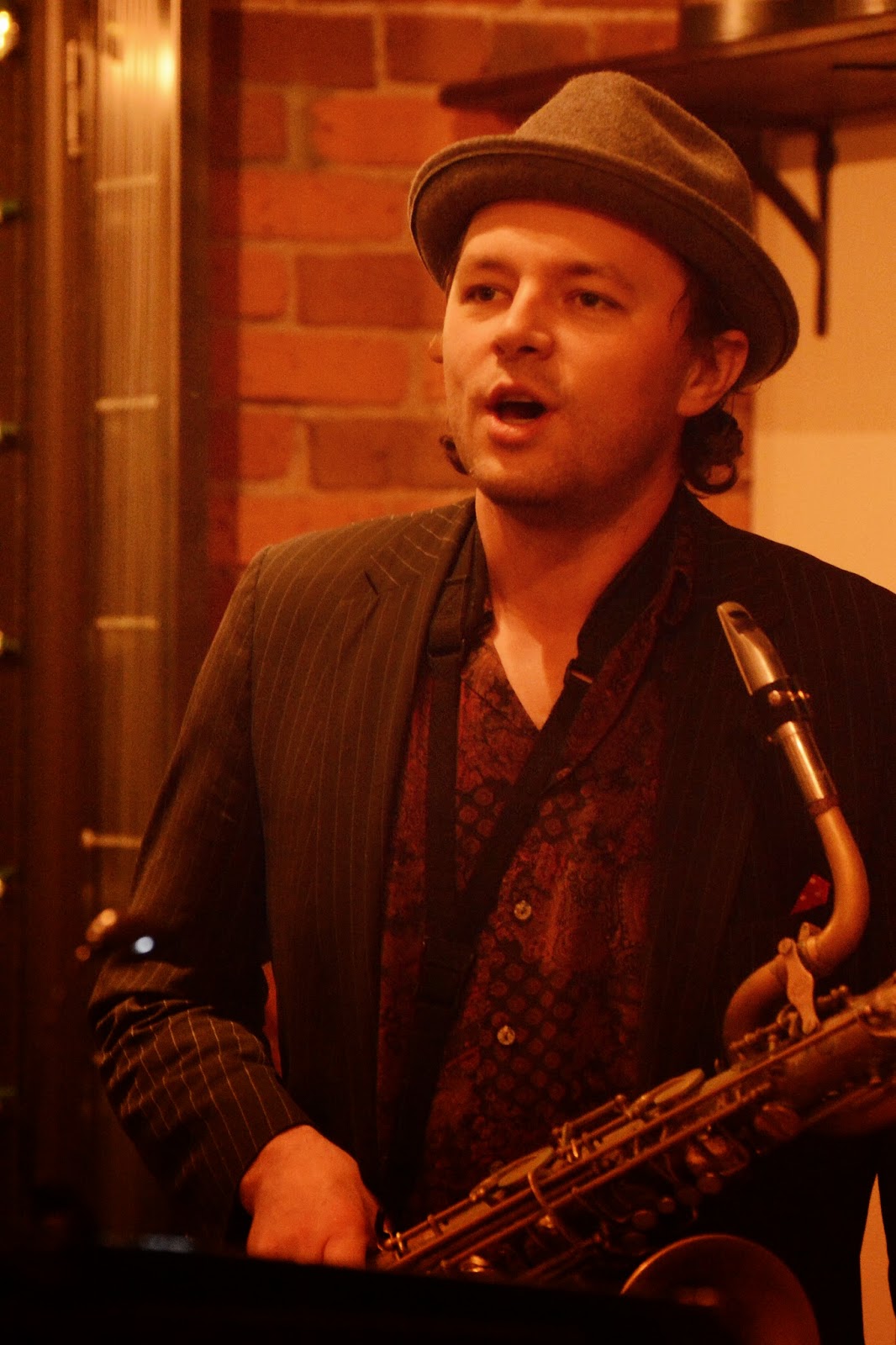 The saxophonist began to sing, and the guitarist, to smile. 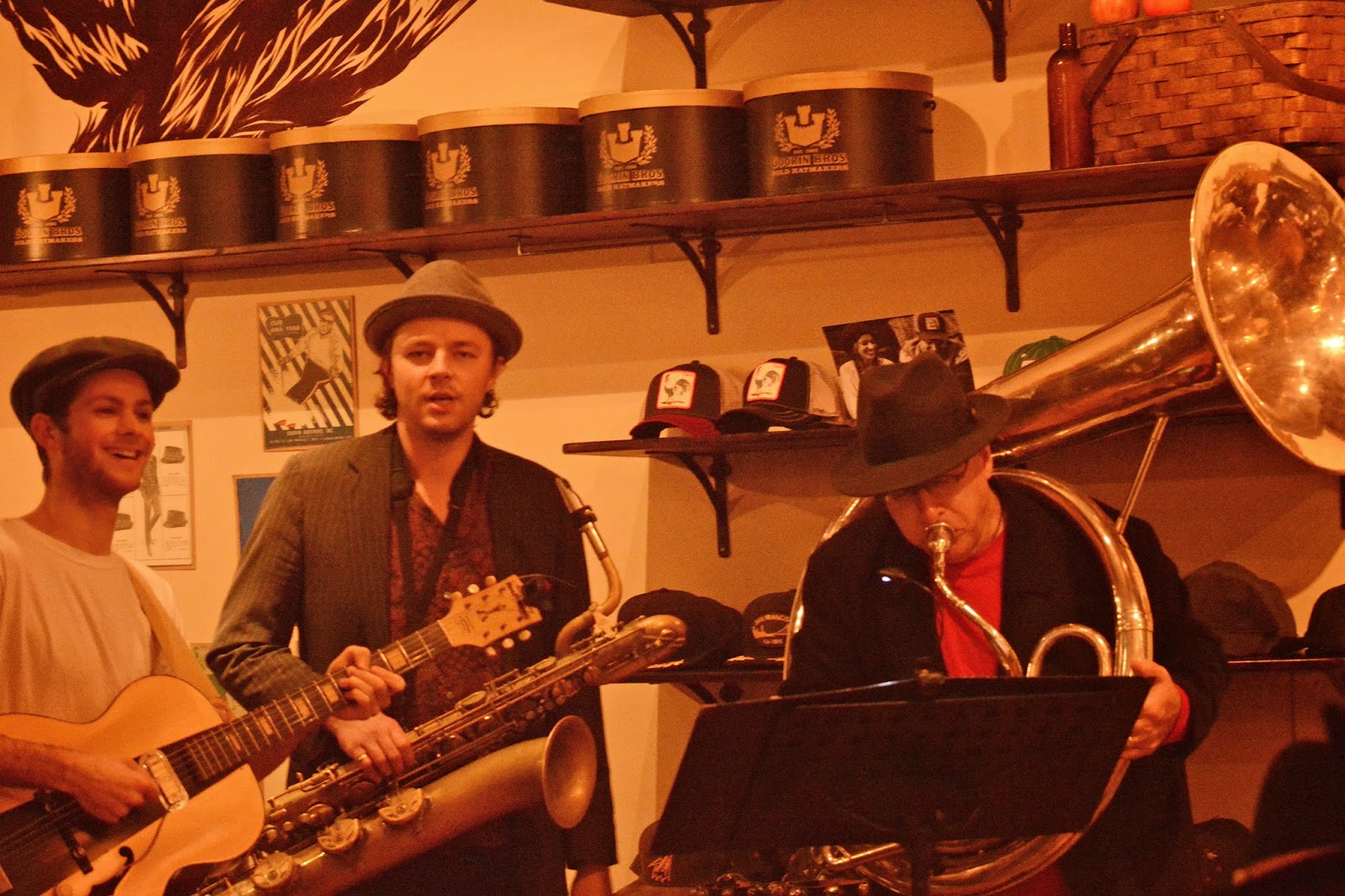 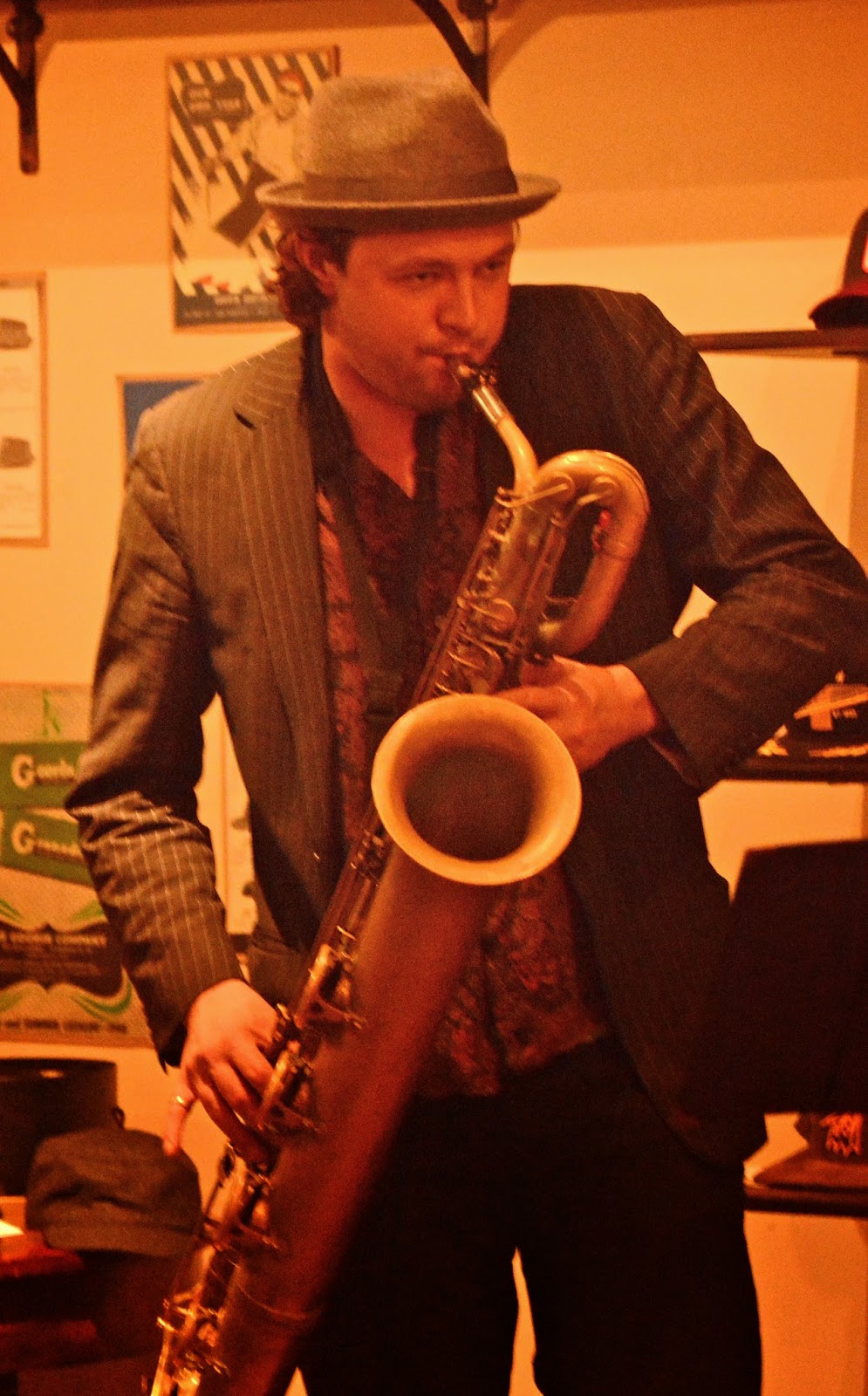 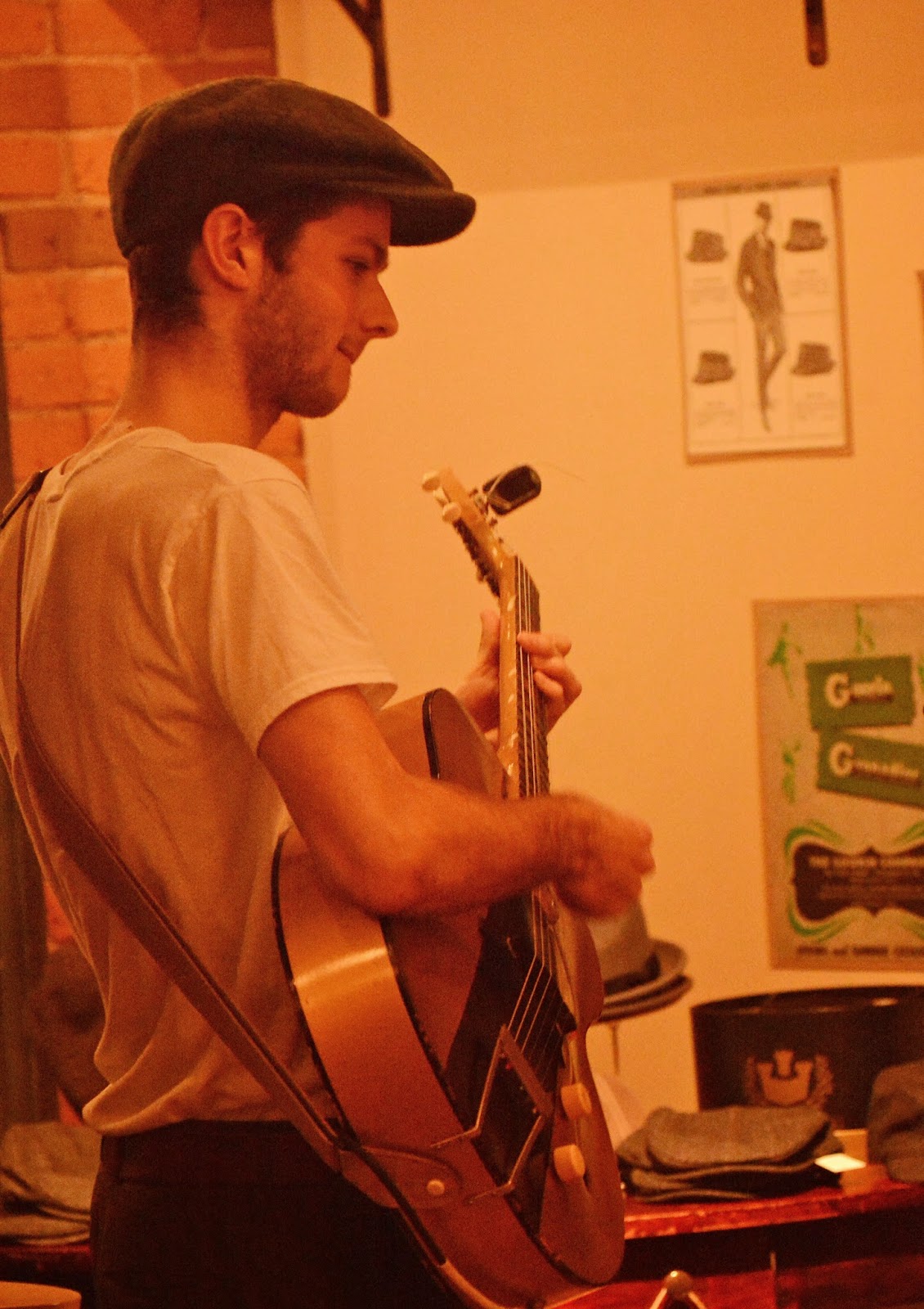 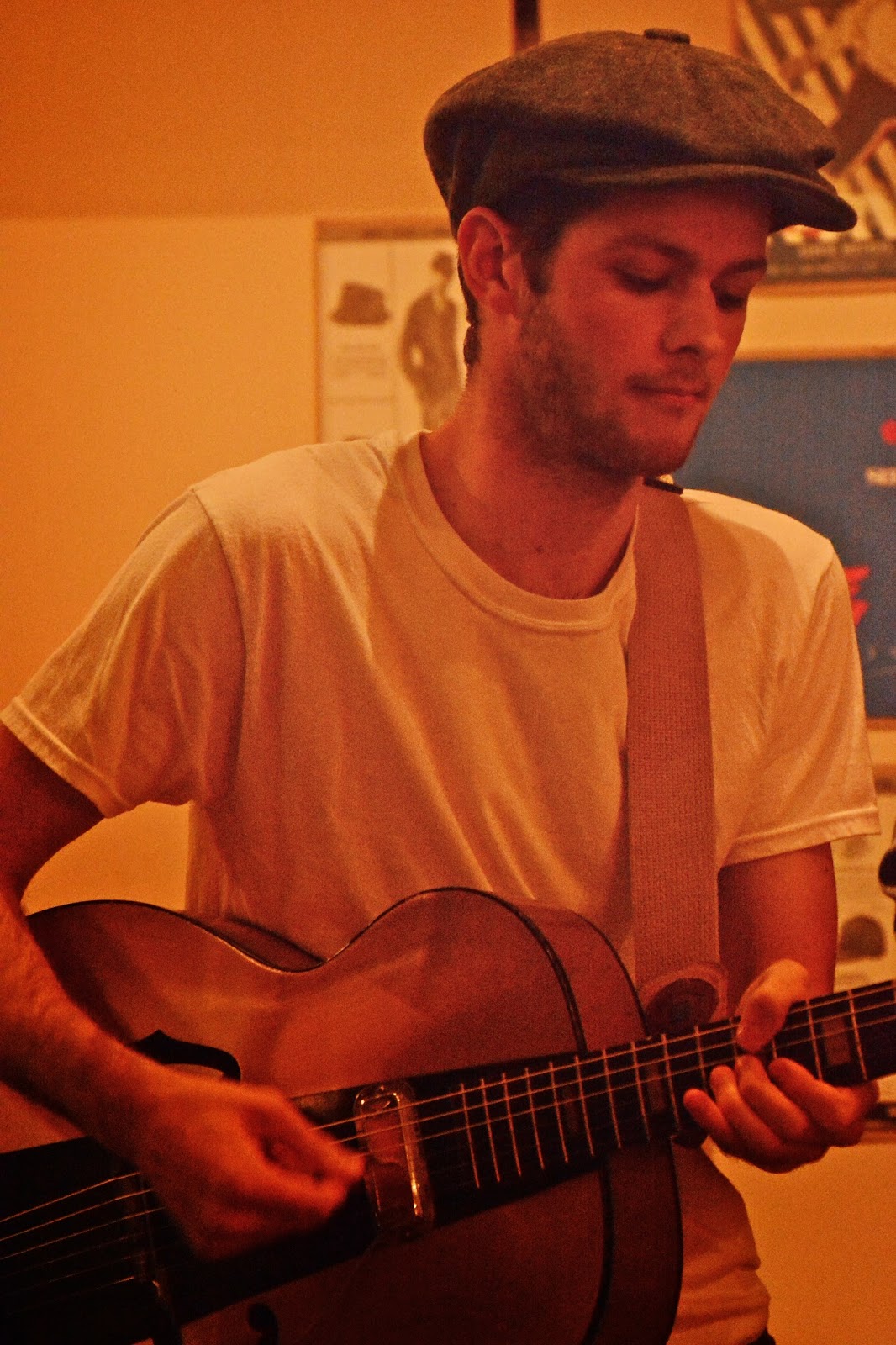 I almost forgot about the hats. 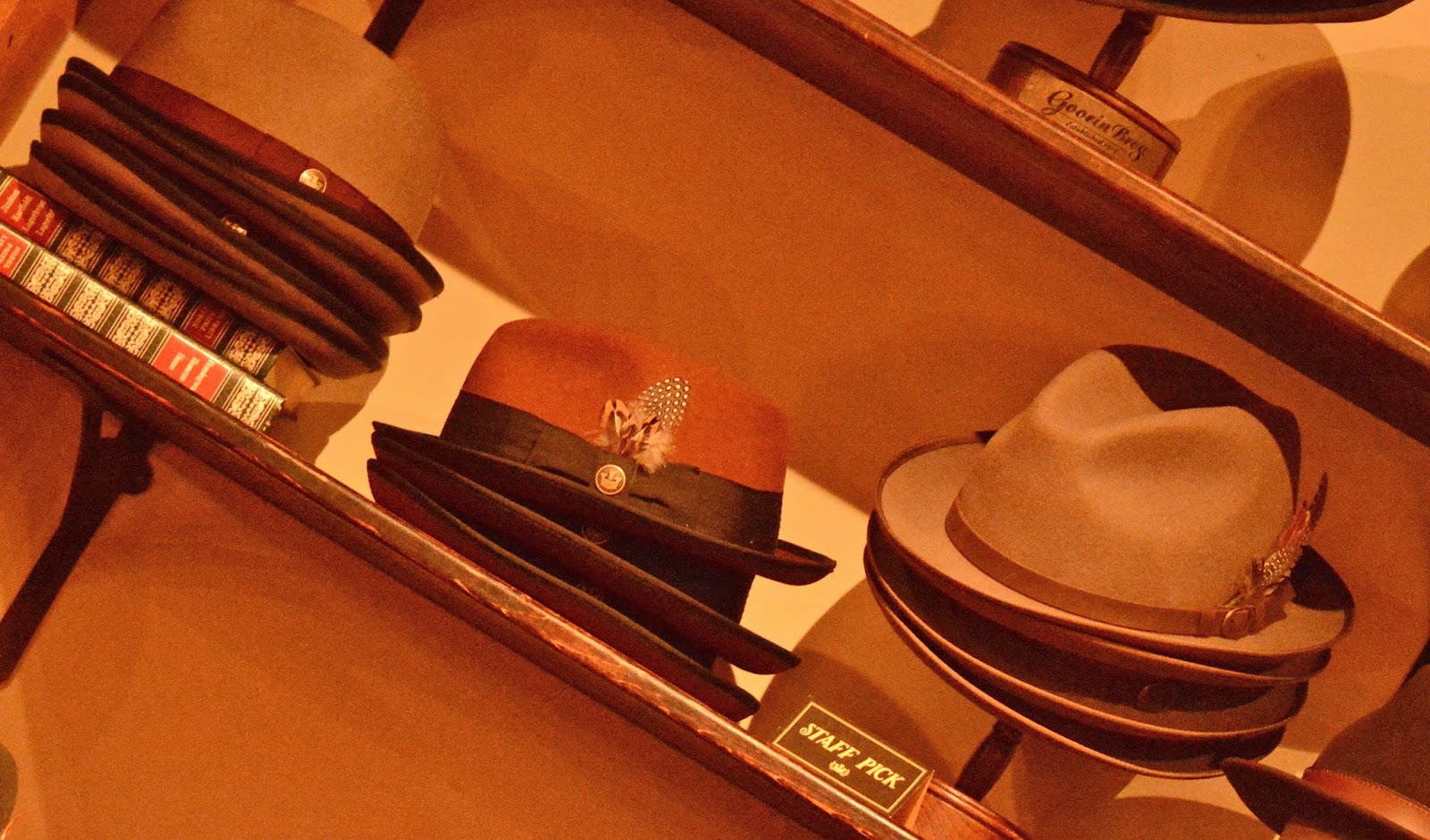 The sales staff are friendly and helpful.  I might add they really look good in their hats! Let's just say if I decide to buy a hat, 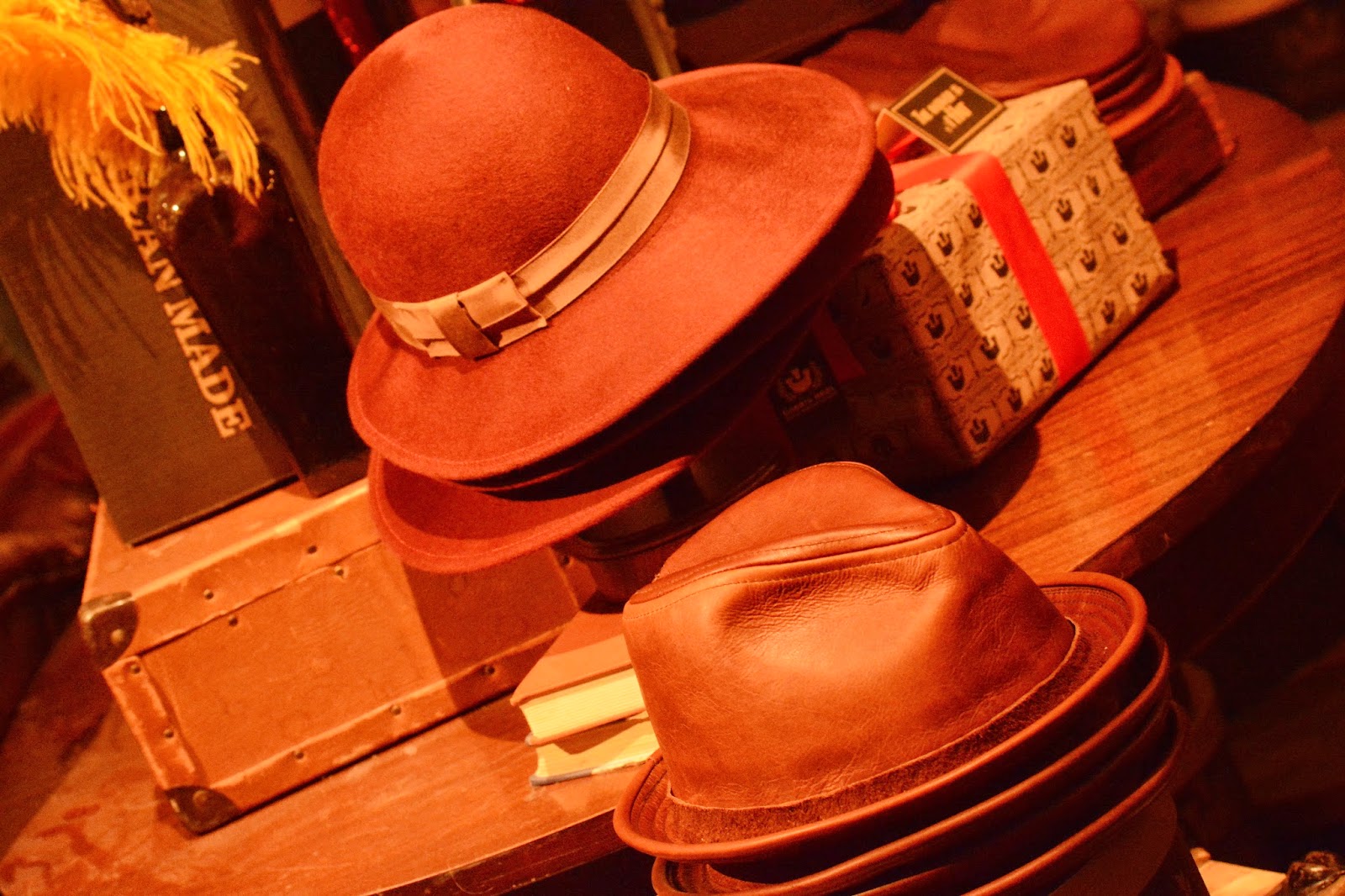 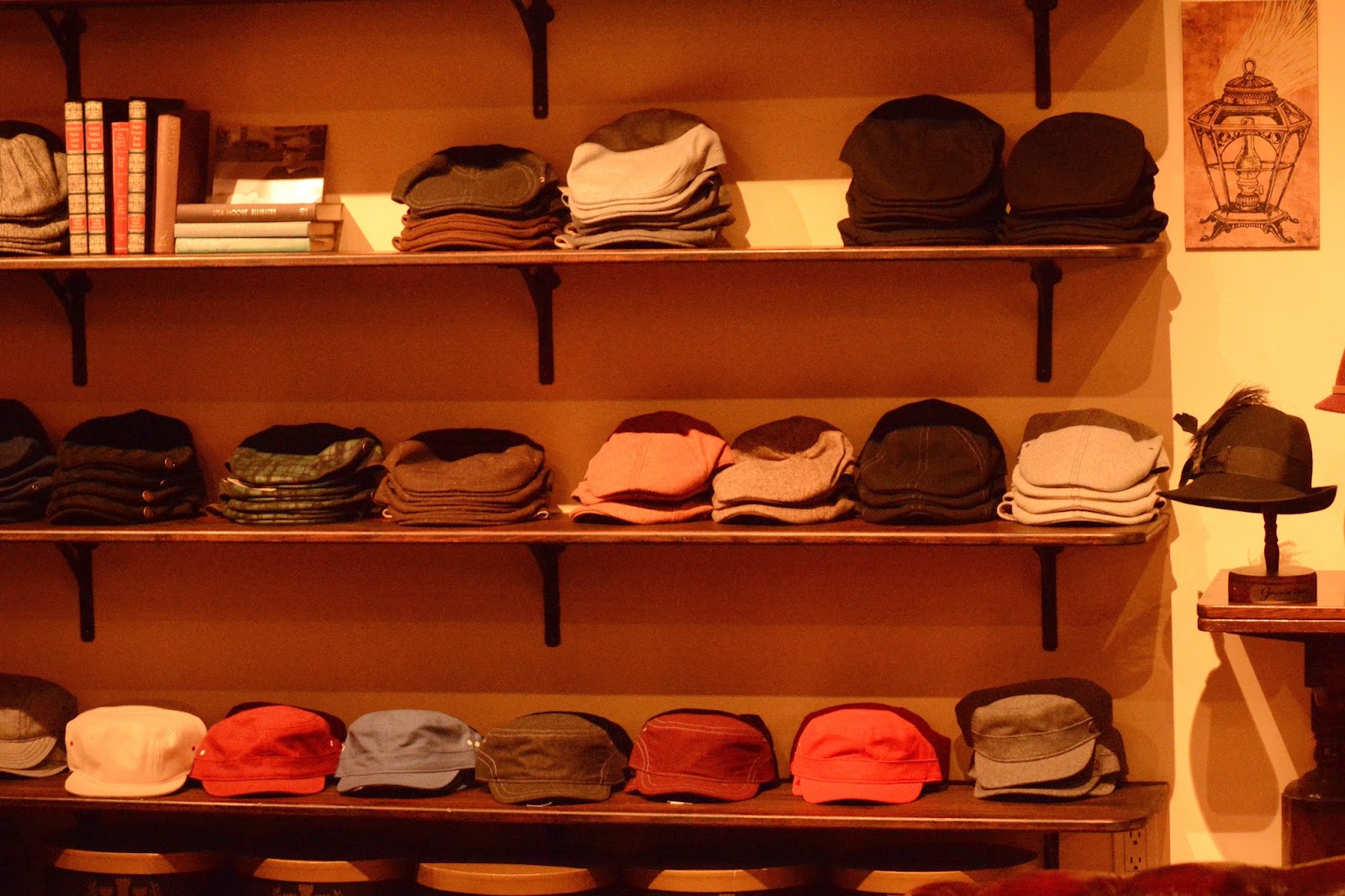 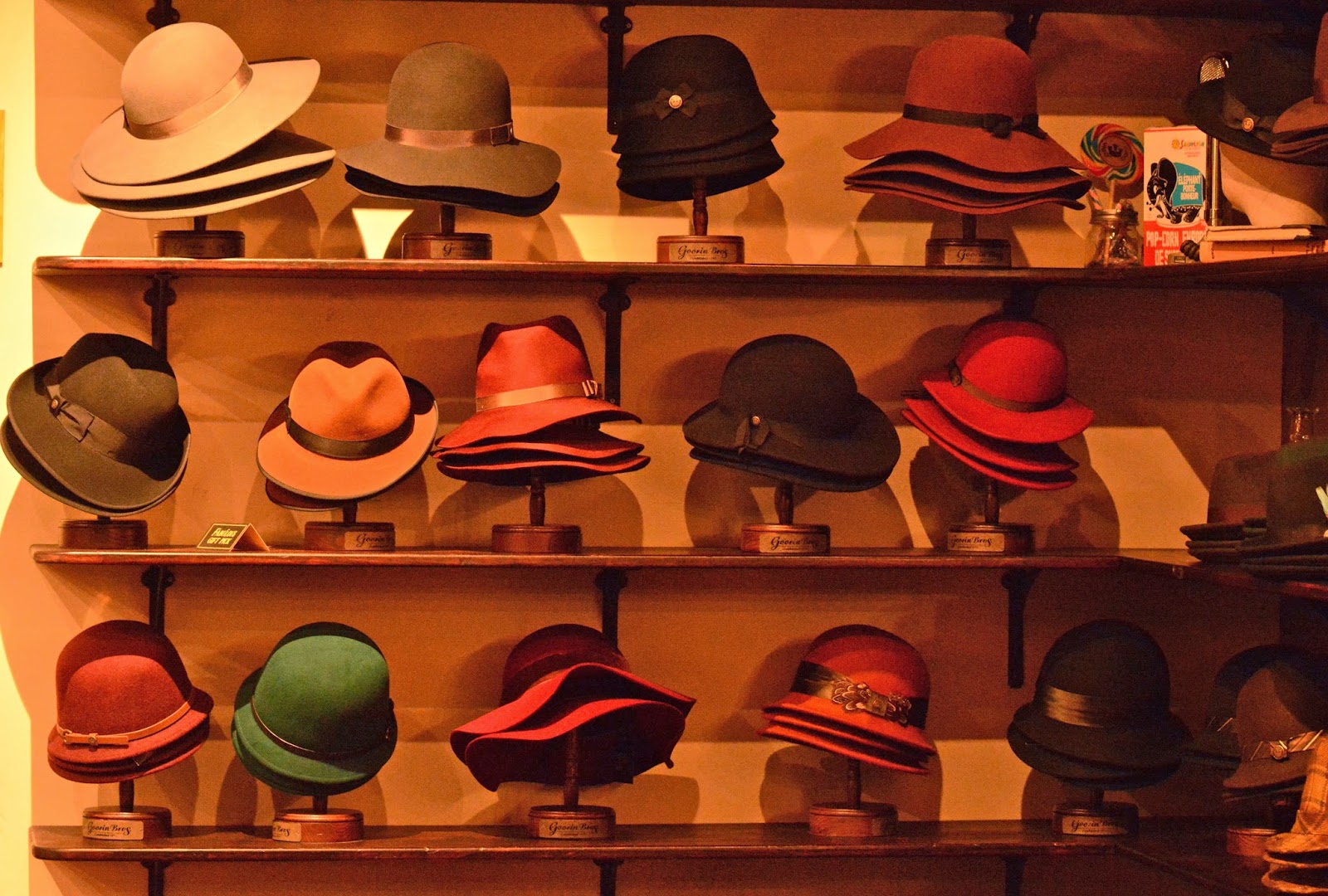 Oh..  and did I mention that all of their hats are unisex? 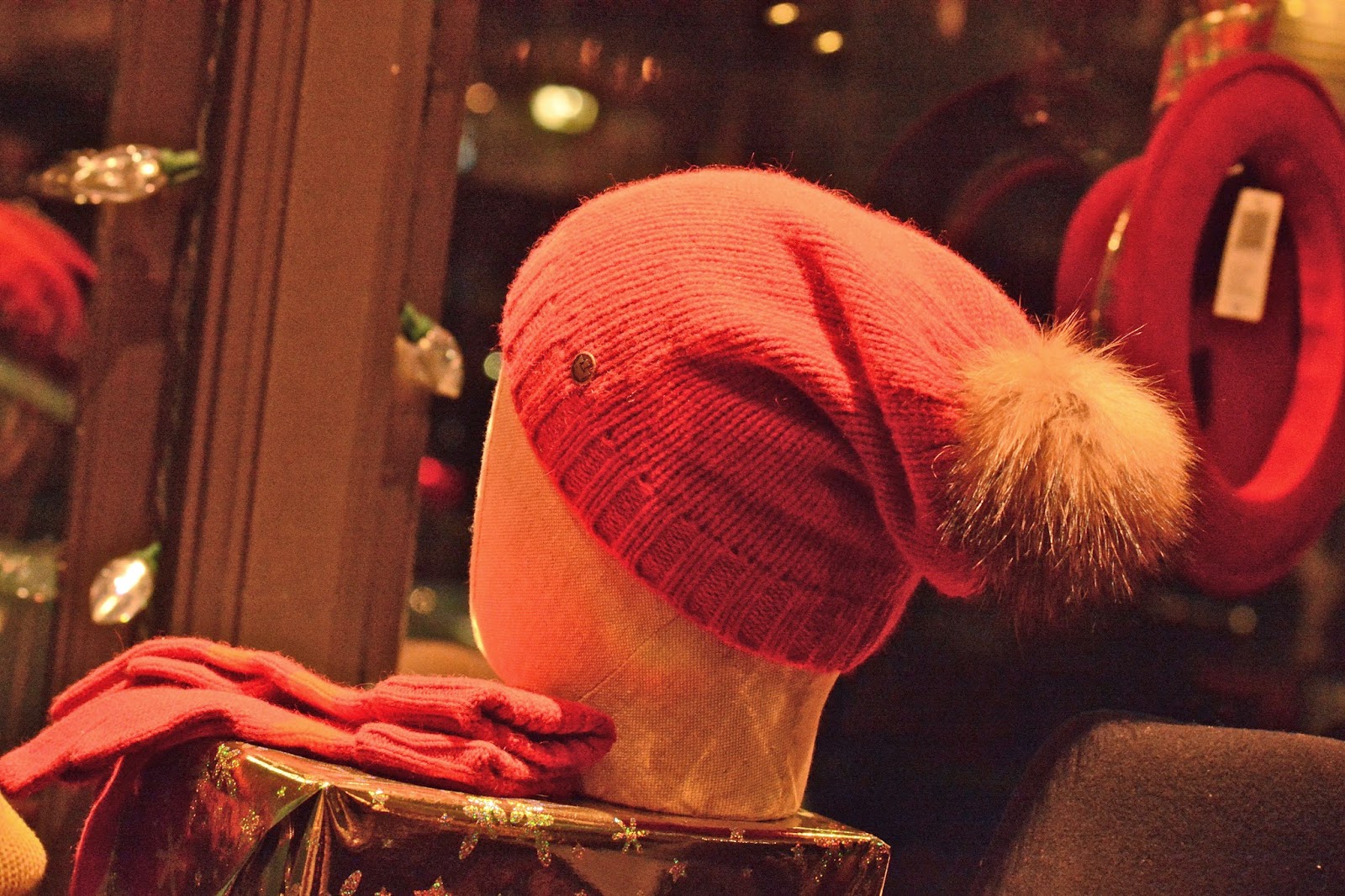 I was told by the salesgirl that at least at the Vancouver store, the hats are half price every Thursday between 5:00 p.m. and 7:00 p.m.  I'm not sure if that is just during the Christmas season, but certainly, if you are thinking of buying a hat, a trip to Goorin Bros. would be fun.  Check out their web site.  In operation since 1895, they have 28 shops in North America. 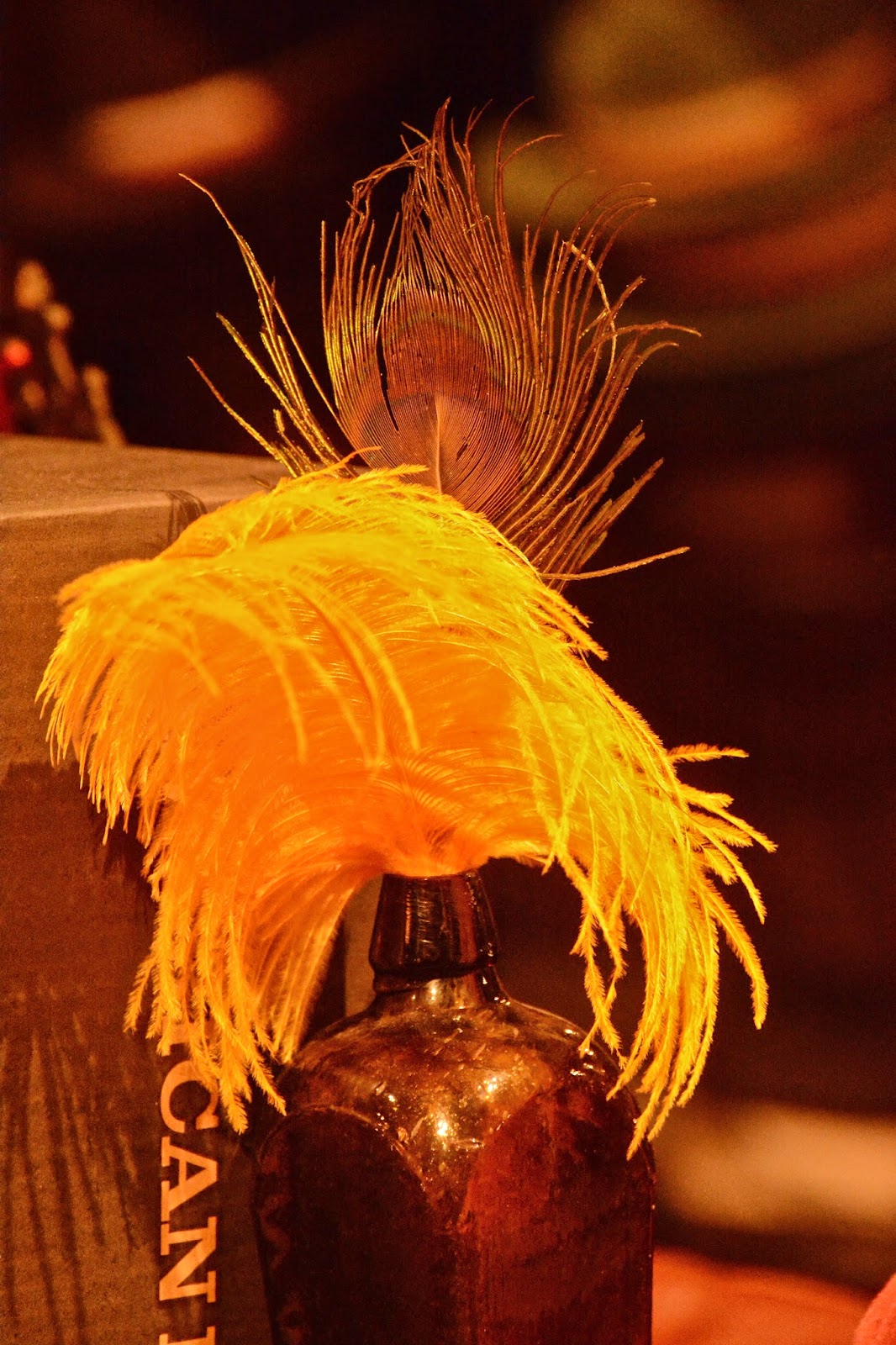 Bill and Black Jack were busy while I took pictures and when I realized what they were up to, 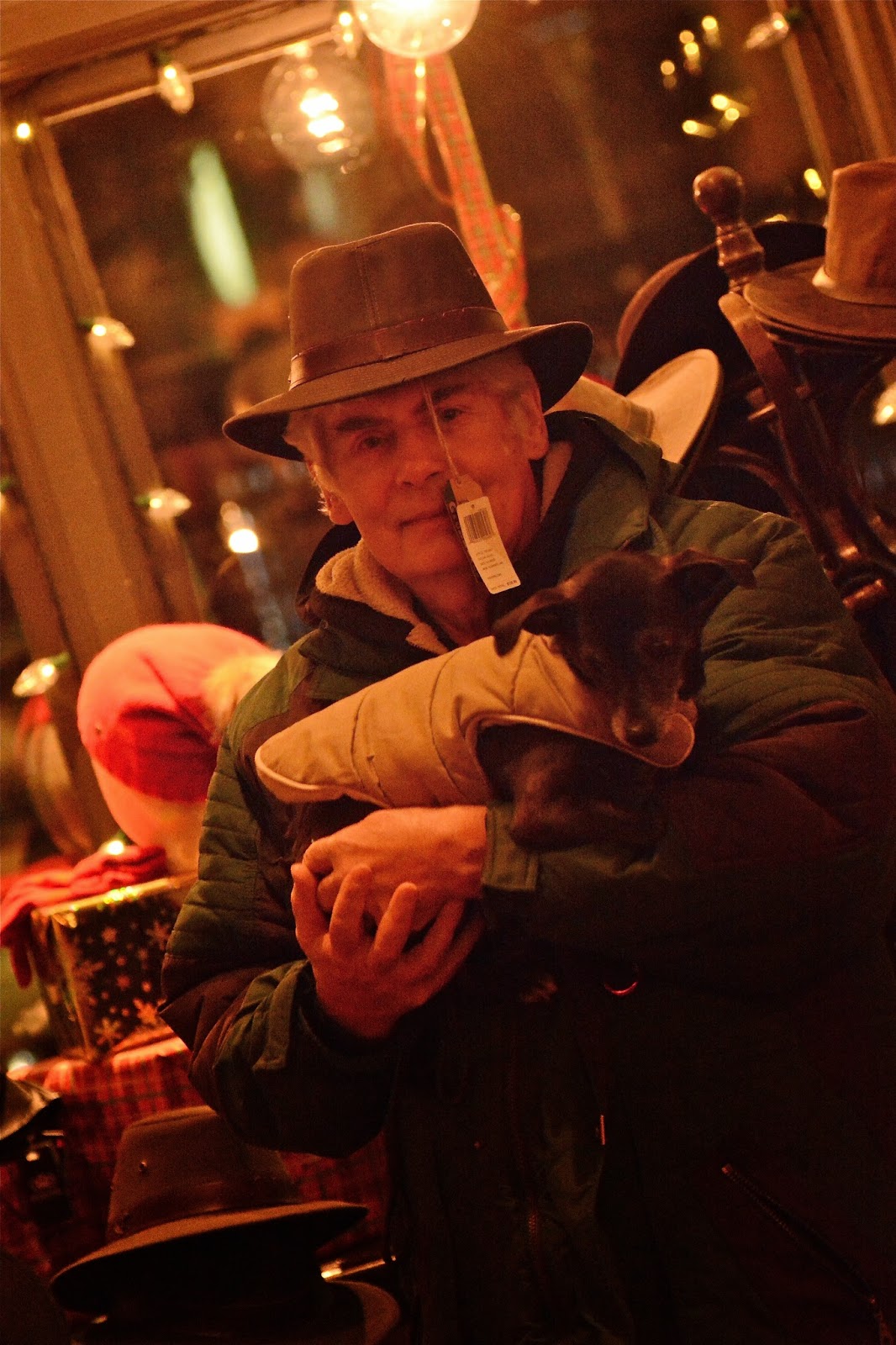 I laughed at first, but my next thought was that we have to buy Bill a hat.  He was clowning around with a price tag in front of his nose, but there was no hiding the fact that he and the hat were meant for each other.  Don't you agree? 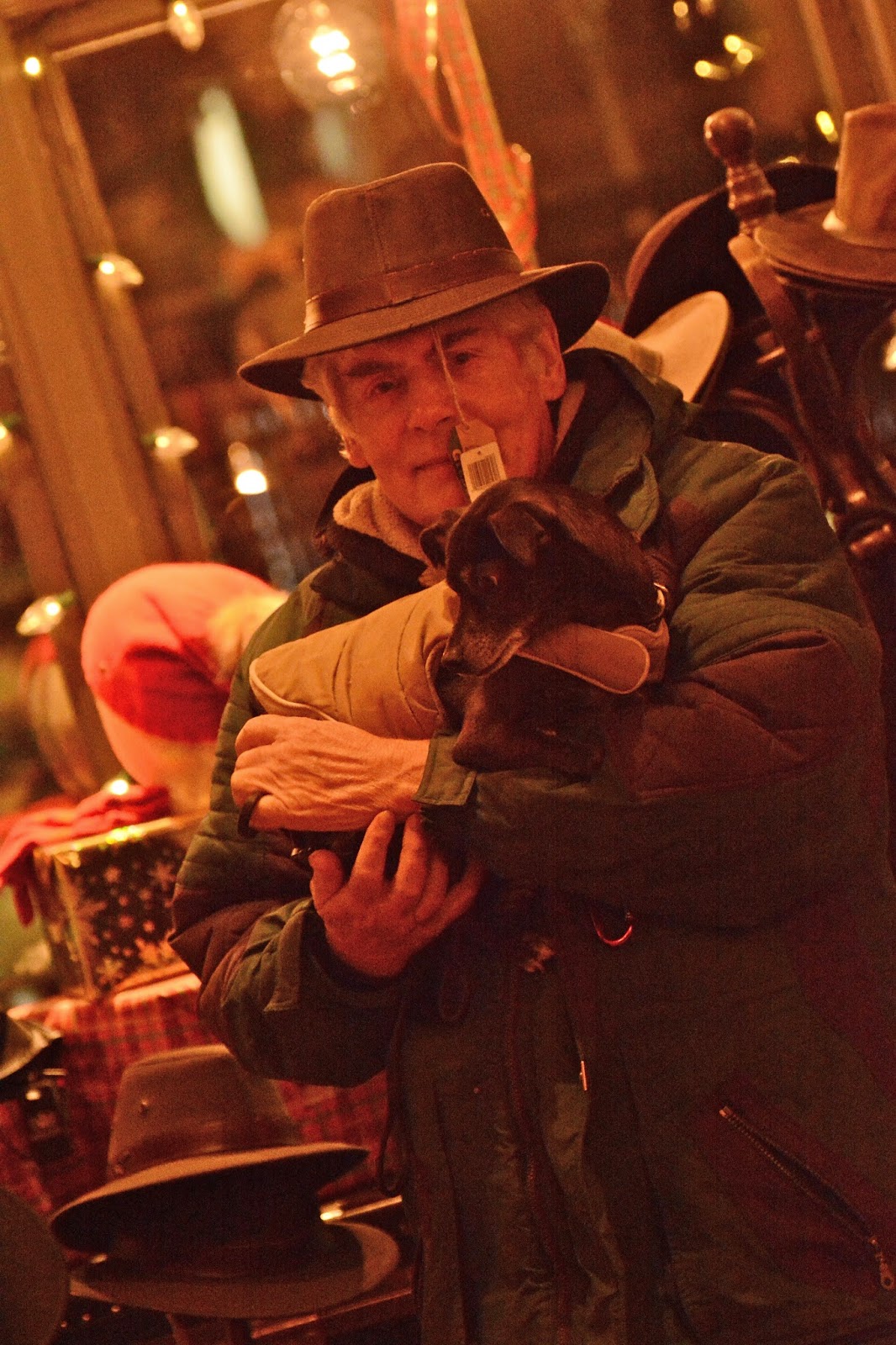 Well, Friday in Vancouver is almost over, but perhaps you will find a little time to visit Orange You Glad It's Friday some time over the next day or two.  Many thanks for stopping by here on your way, and many thanks to three fine musicians and a really neat hat shop!  Have a wonderful weekend, everybody!
Posted by Black Jack's Carol at 11:07 PM