Of Artists and Light in my Life

I am sharing the post this morning with Our World Tuesday.  Many thanks to Arija, Gattina, Lady Fi, Sylvia, Sandy and Jennifer, the volunteers who keep that meme running so successfully.  It has endured many years and deservedly so, as it brings people and their worlds together in a way that is truly remarkable.

Sunday evening, I learned that Crissy, a talented artist and neighbour, had finished a sculpting project for Dundarave Festival. I watched Crissy bring Mr. Grinch to life back in the summer.  She promised to let me see him in his final form, and I am so glad she kept that promise! 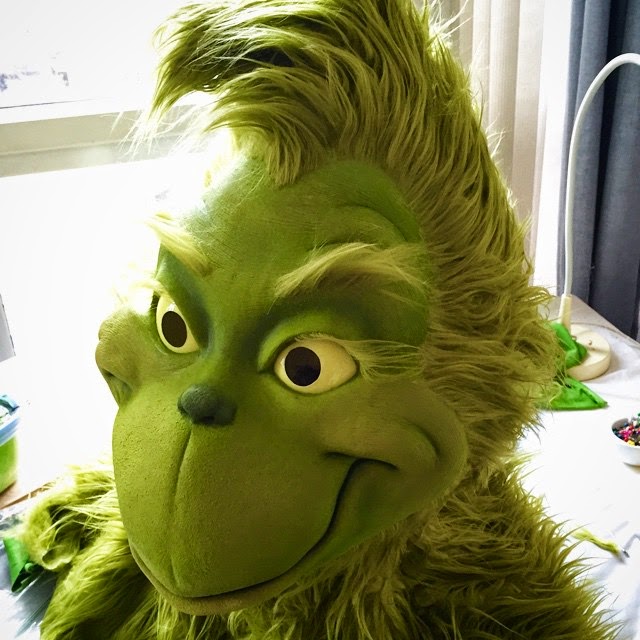 She posted two photos of him on her facebook page.  I'm not sure if the one below was photographed with different lighting or whether it shows a step before Mr. Grinch took on his bright green hue. What I can say is that he has a twinkle in his eye that speaks of humour and kindness and makes you feel like giving him a great big hug. 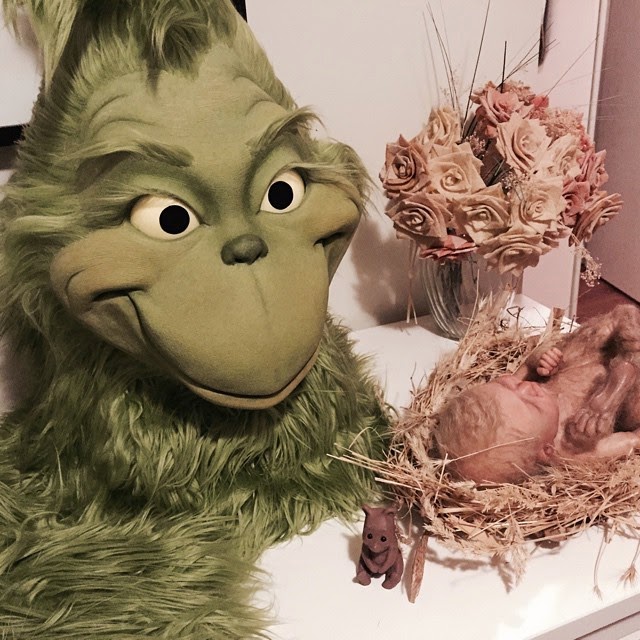 Mr. Grinch came to life for a very good cause.  I hadn't heard of the Dundarave Festival of Lights, but the web site looks really interesting.  There will be four Saturdays of FREE concerts, and it looks like the local groups performing are already making a significant mark on the music world.  There will also be children's choirs and other performers with the goal to gather together "neighbours and friends in the pure joy of music."  An important part of the festival, Forest of Miracles, is dedicated to ending homelessness.  This has already had a lot of success, as you can see from a blurb copied here from the web site.

"In the true spirit of Christmas, the Festival's "Forest of Miracles" calls out the better angels in all of us to make sure no one is left out in the cold.  Sponsored and decorated by families, community groups and businesses, the Festival's Christmas trees on beautiful Dundarave Beach have raised over $120,000 over five Christmases past for the Lookout Shelter.  West Vancouver's firefighters deserve special mention for their heroic support of the Shelter.  The Lookout Emergency Aid Society has used this money to support essential services for the homeless, doubling the transitional services it provides to the most vulnerable people in our community."

The next series of photos were posted on September 1st, but I've repeated them here for those of you who may have missed seeing them and for those who would like to compare the "before" and "after" of Mr. Grinch's creation.  Crissy was working in the little park near our apartment.  On such a beautiful day, she didn't want to be inside, so she took her work out with her.  Many stopped to talk to her (including yours truly) and I was struck by the friendly and open way she explained the project to anyone interested. 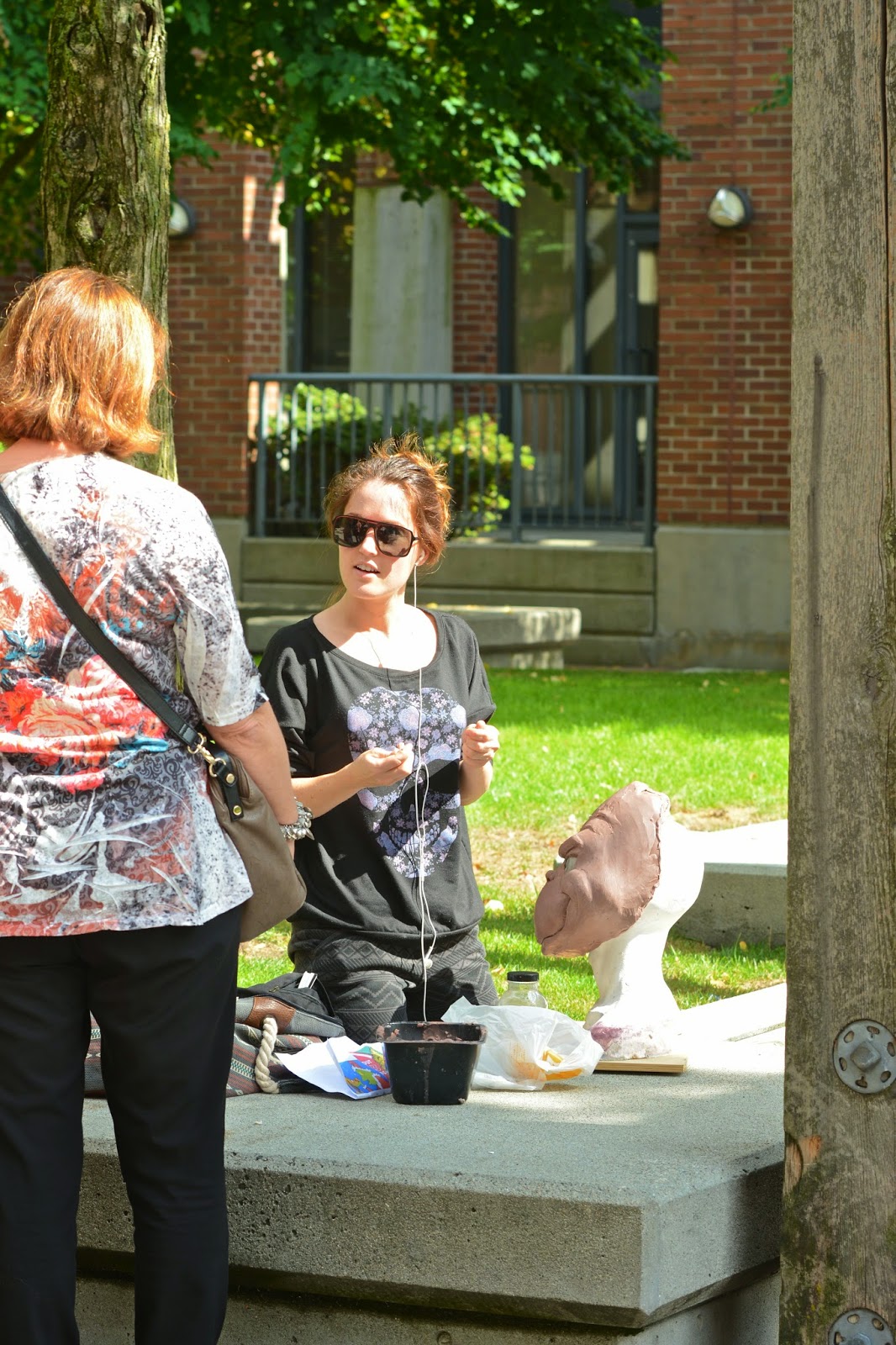 Quite a crowd gathered round. 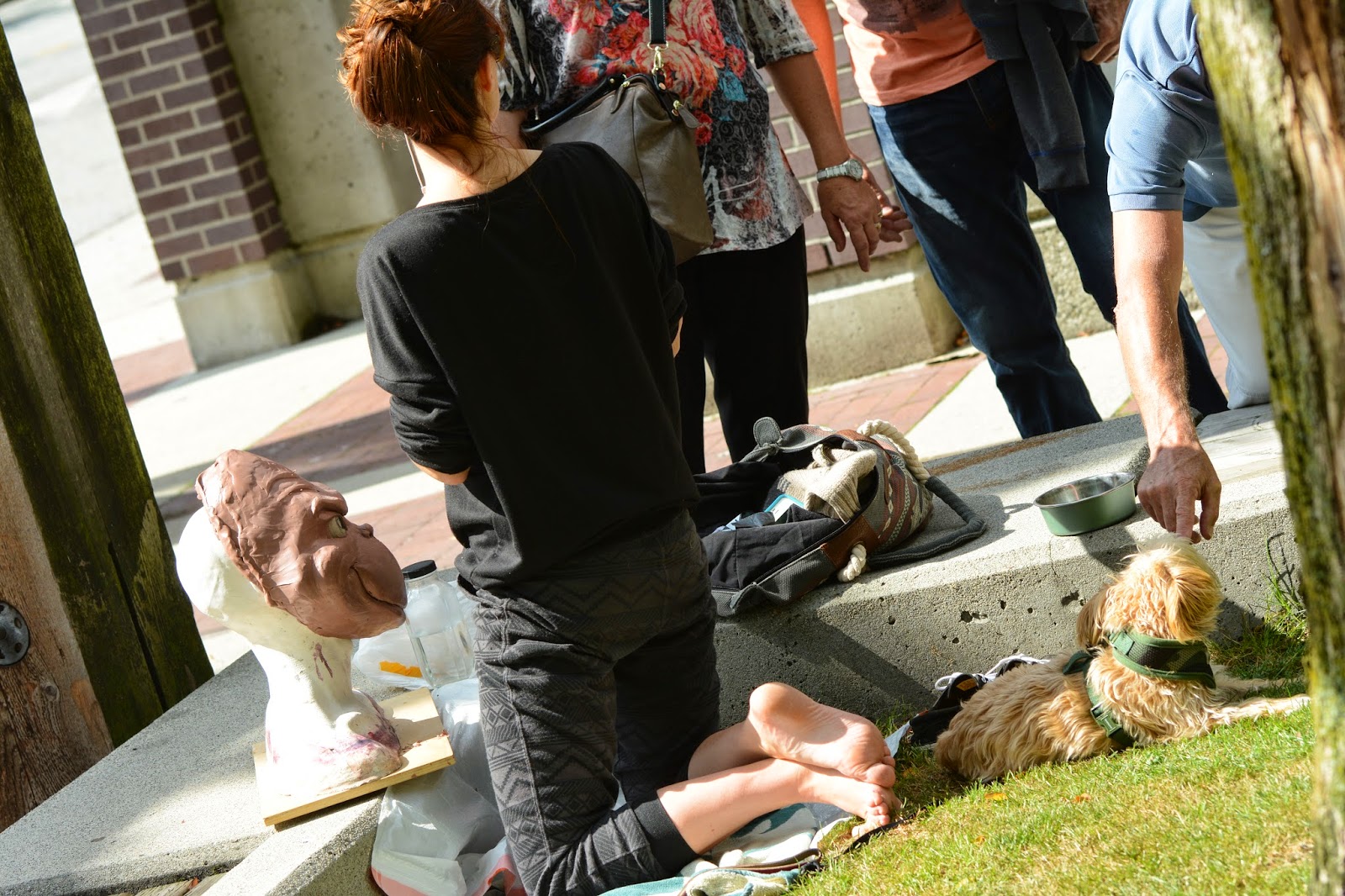 Mr. Grinch was drawing lots of attention, but so was.. 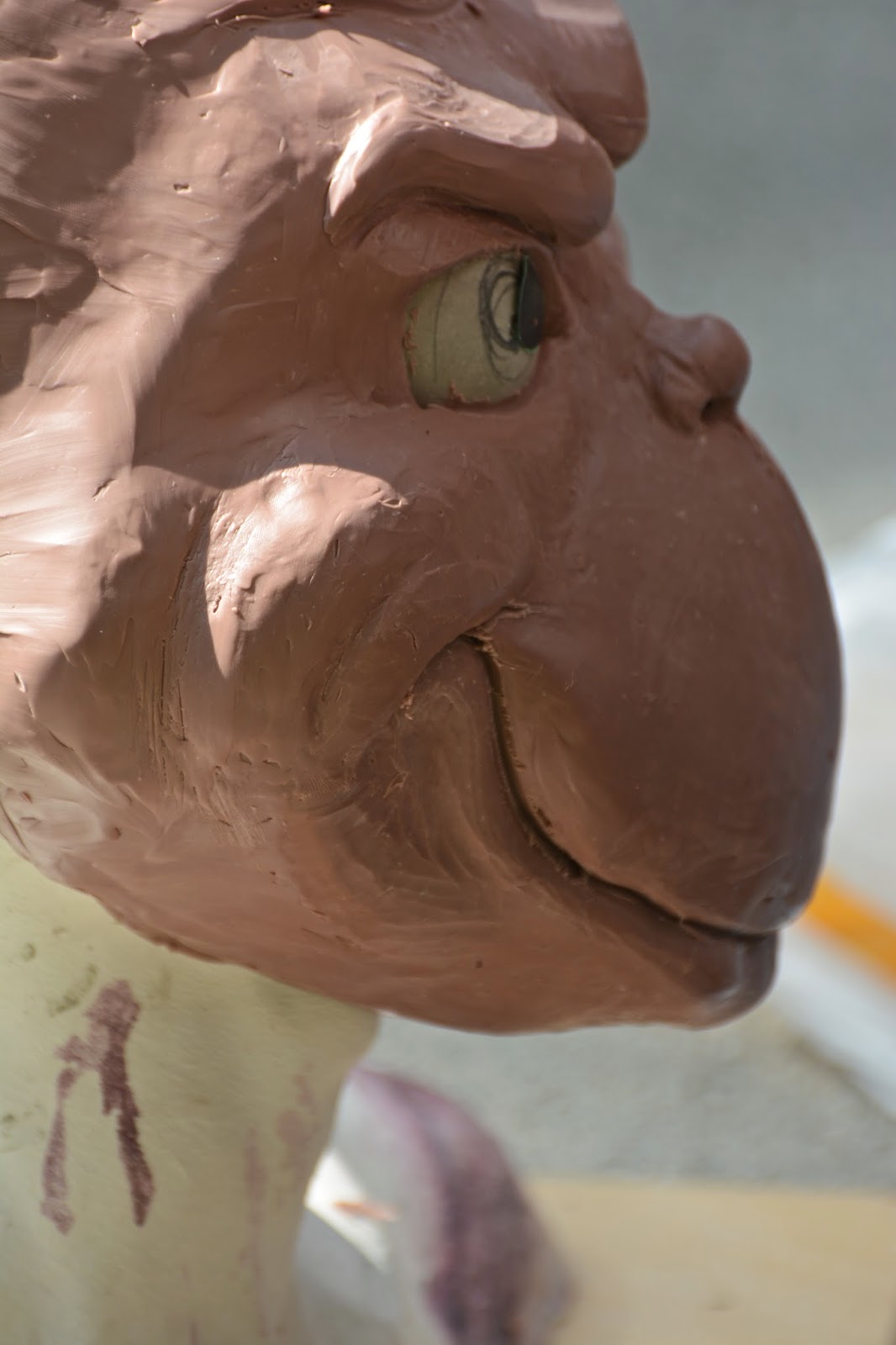 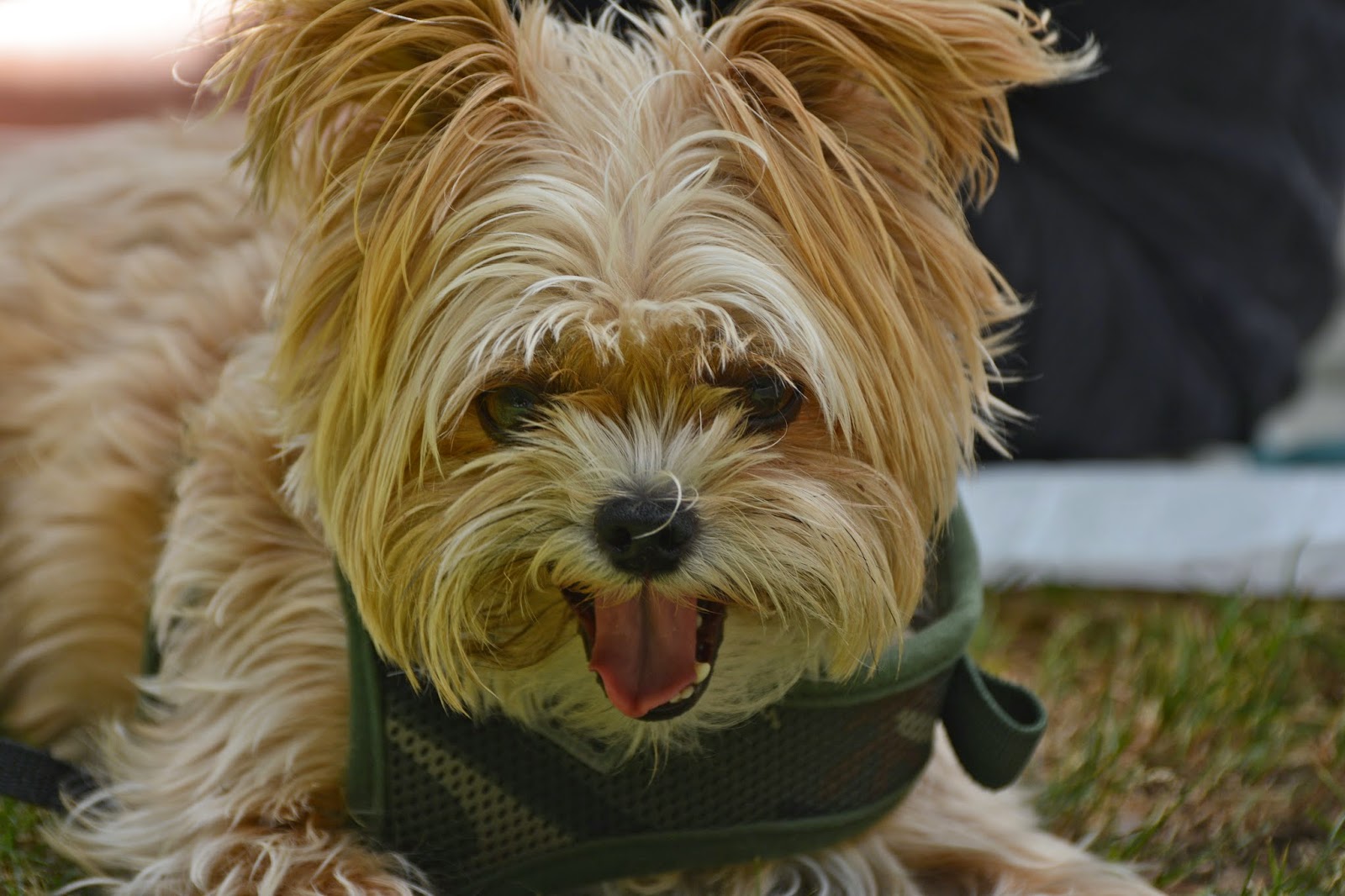 I had never before had the opportunity to watch the shaping of personality features. 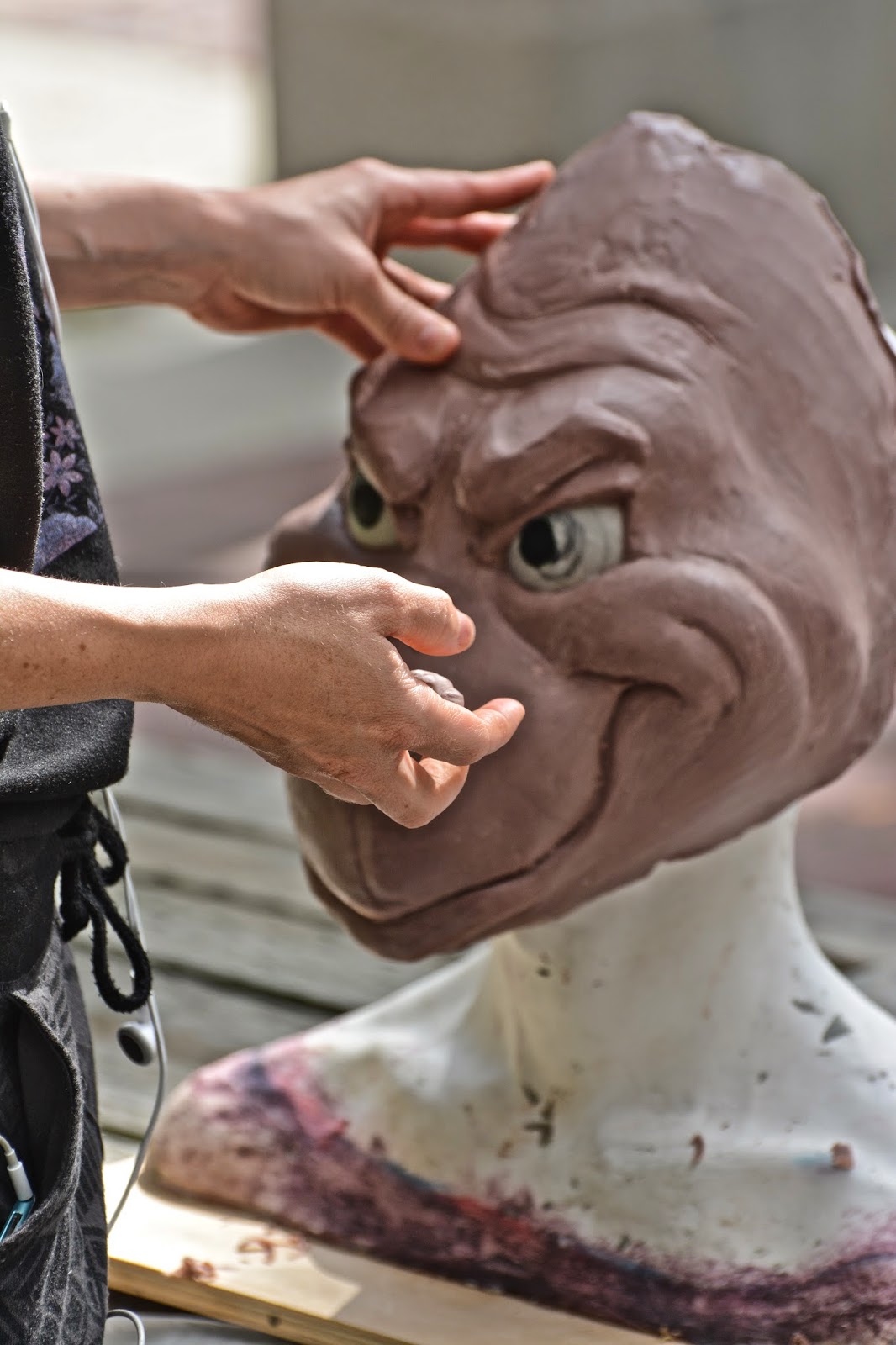 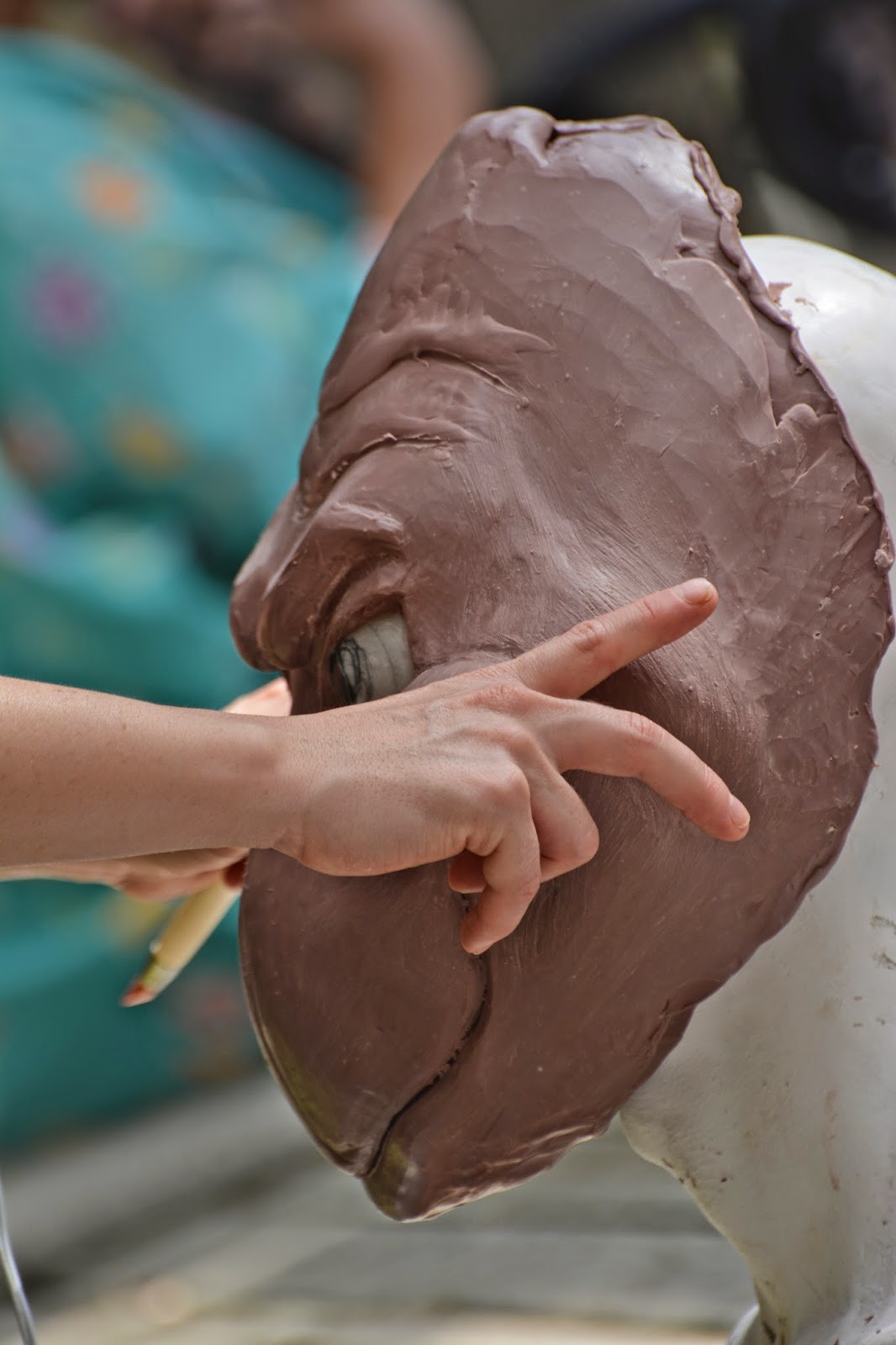 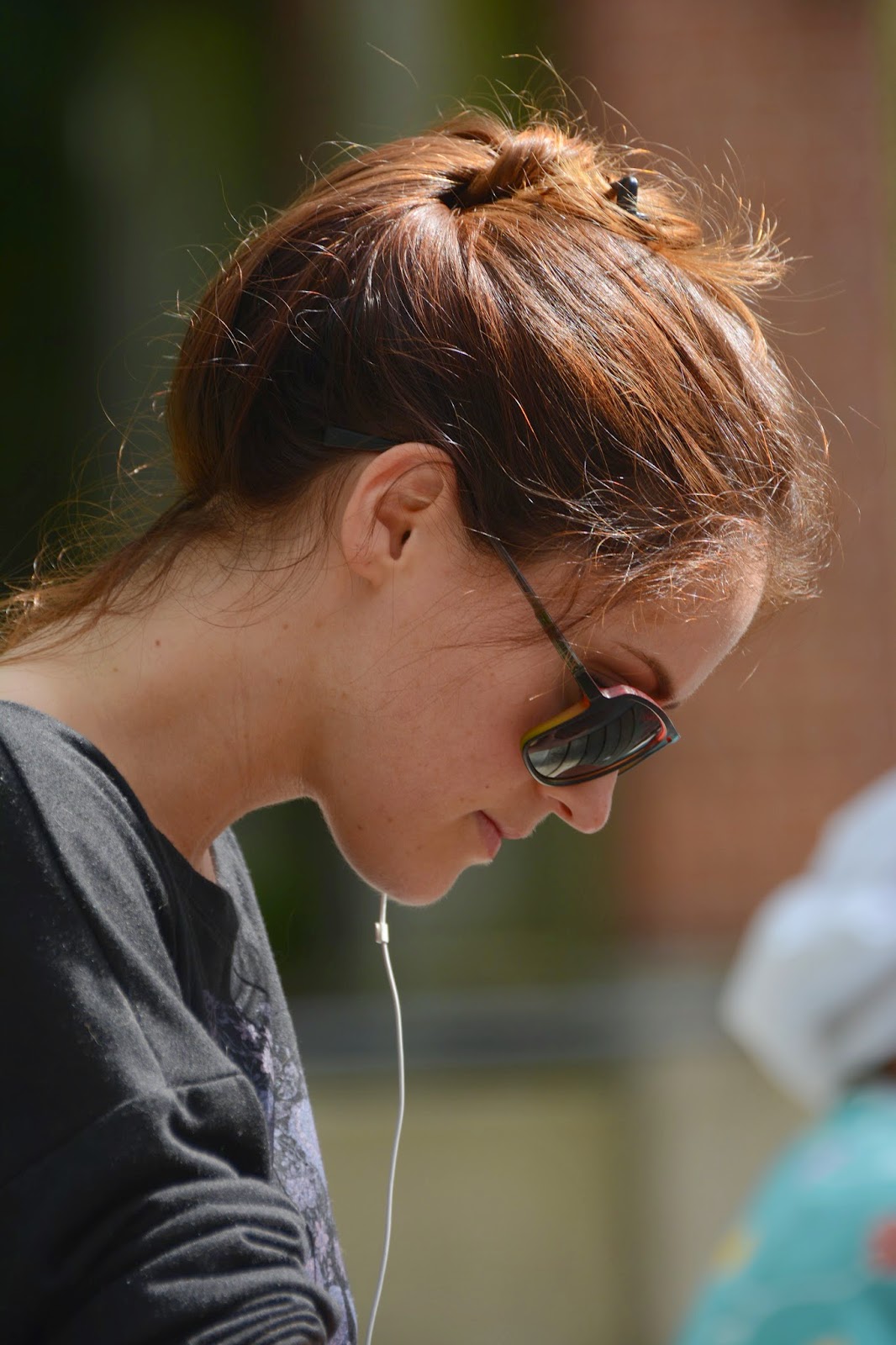 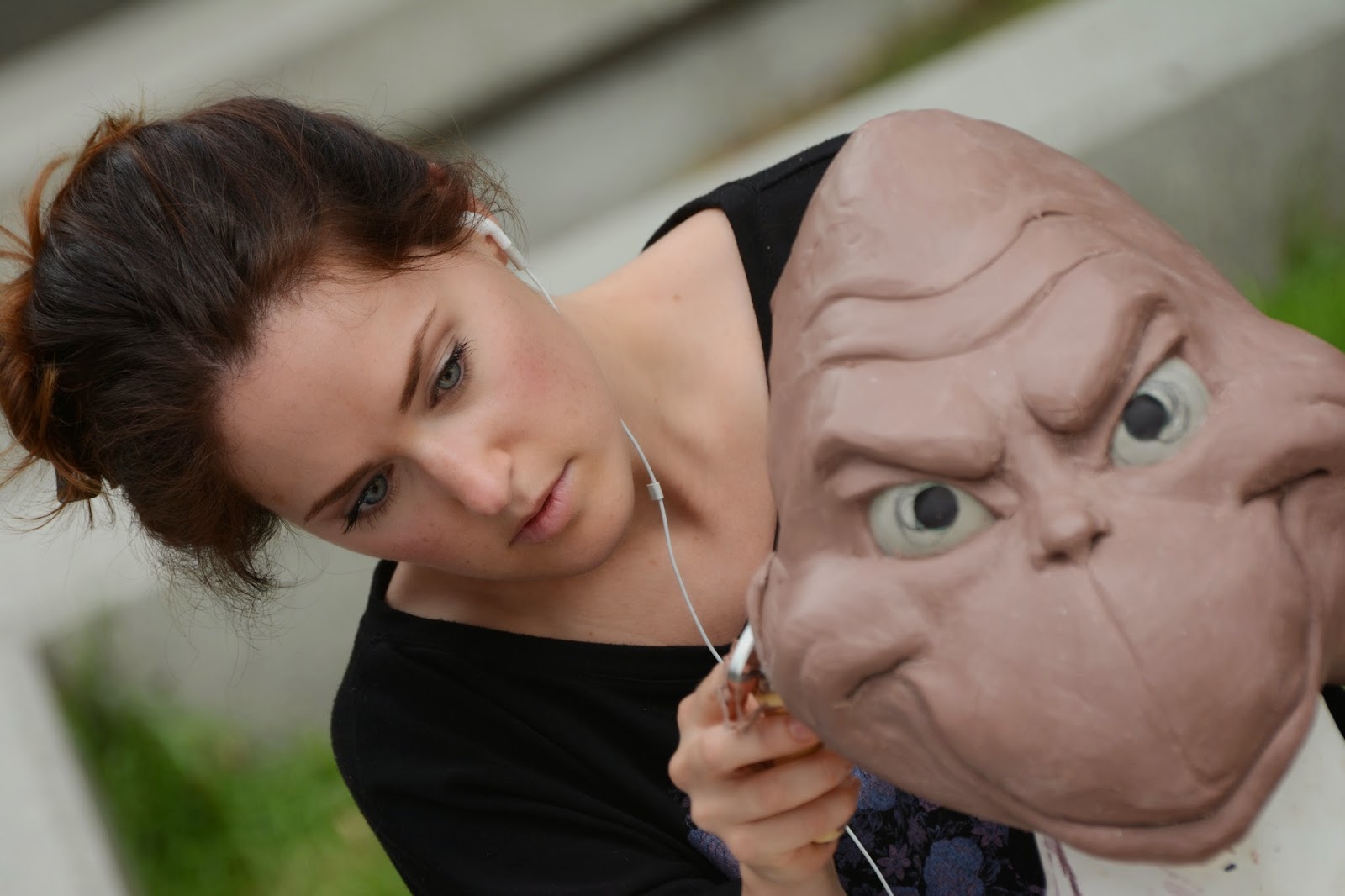 She was still working on him in the late afternoon when I returned to see how she was doing.  By then, her hair had fallen down and she was looking a little more fatigued but her expression was still determined.  To this day, when I walk in that little park, I have that vision of her working, barefoot, hair falling down, little dog by her side, entirely absorbed in getting it right.  I think you'll agree she did just that.  Well done, Crissy! 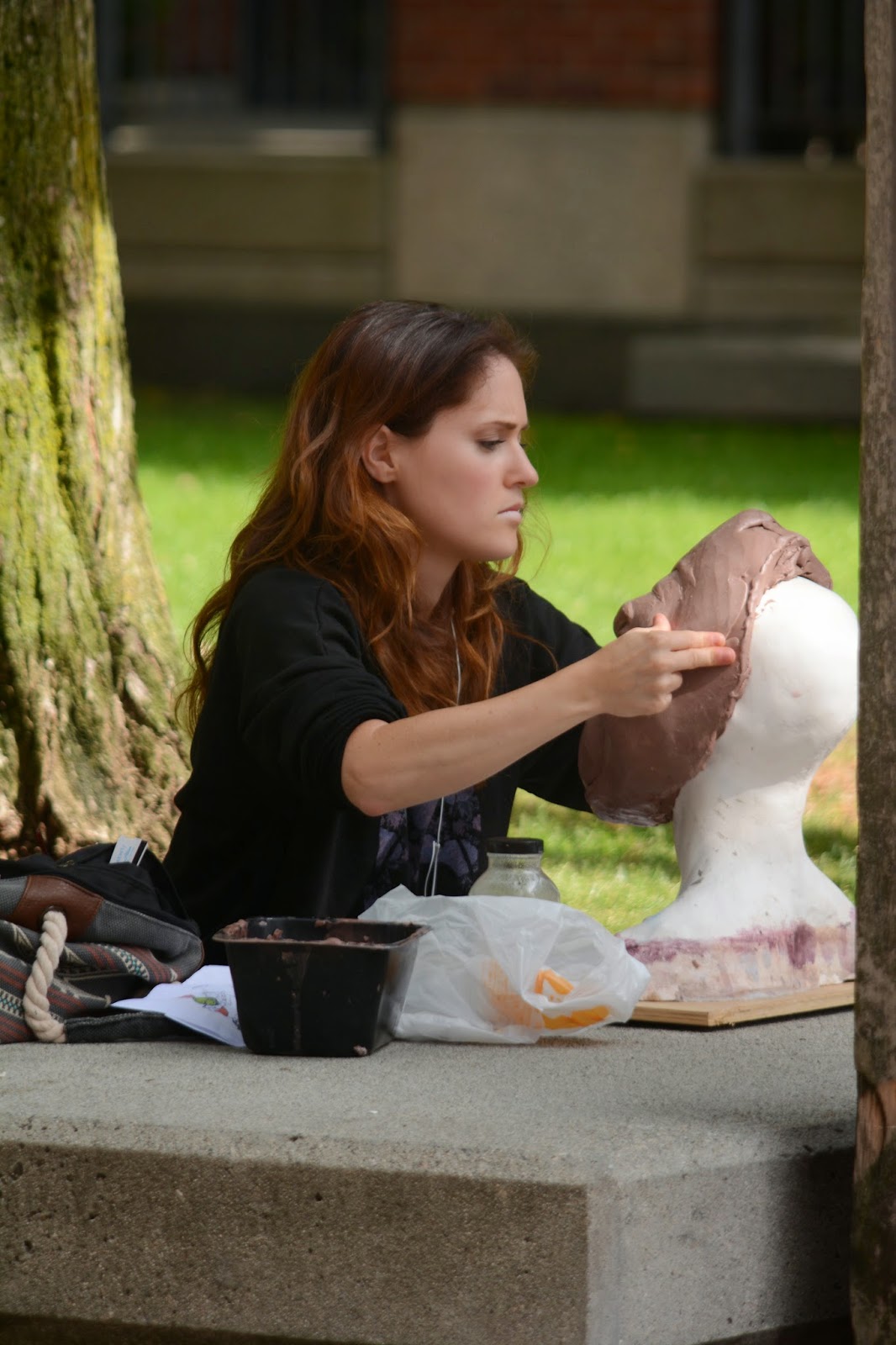 The rest of our day yesterday? Well, we are in for a week of heavy rain that was expected to begin in the morning.  Instead, when I looked out, there was beautiful light. 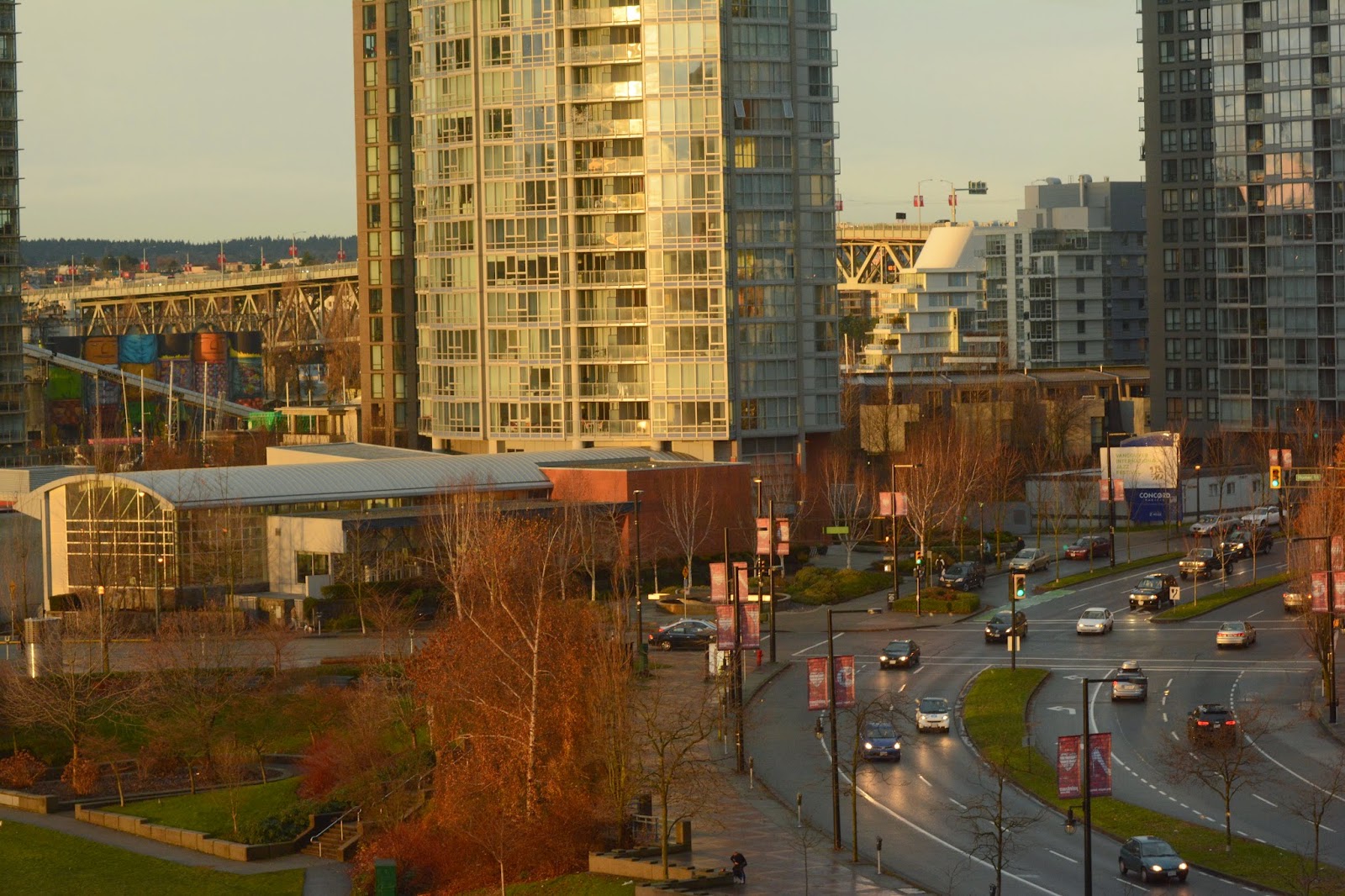 over the neighbourhood.  Perfect!  I would be able to ride my bike to UBC for my piano.. 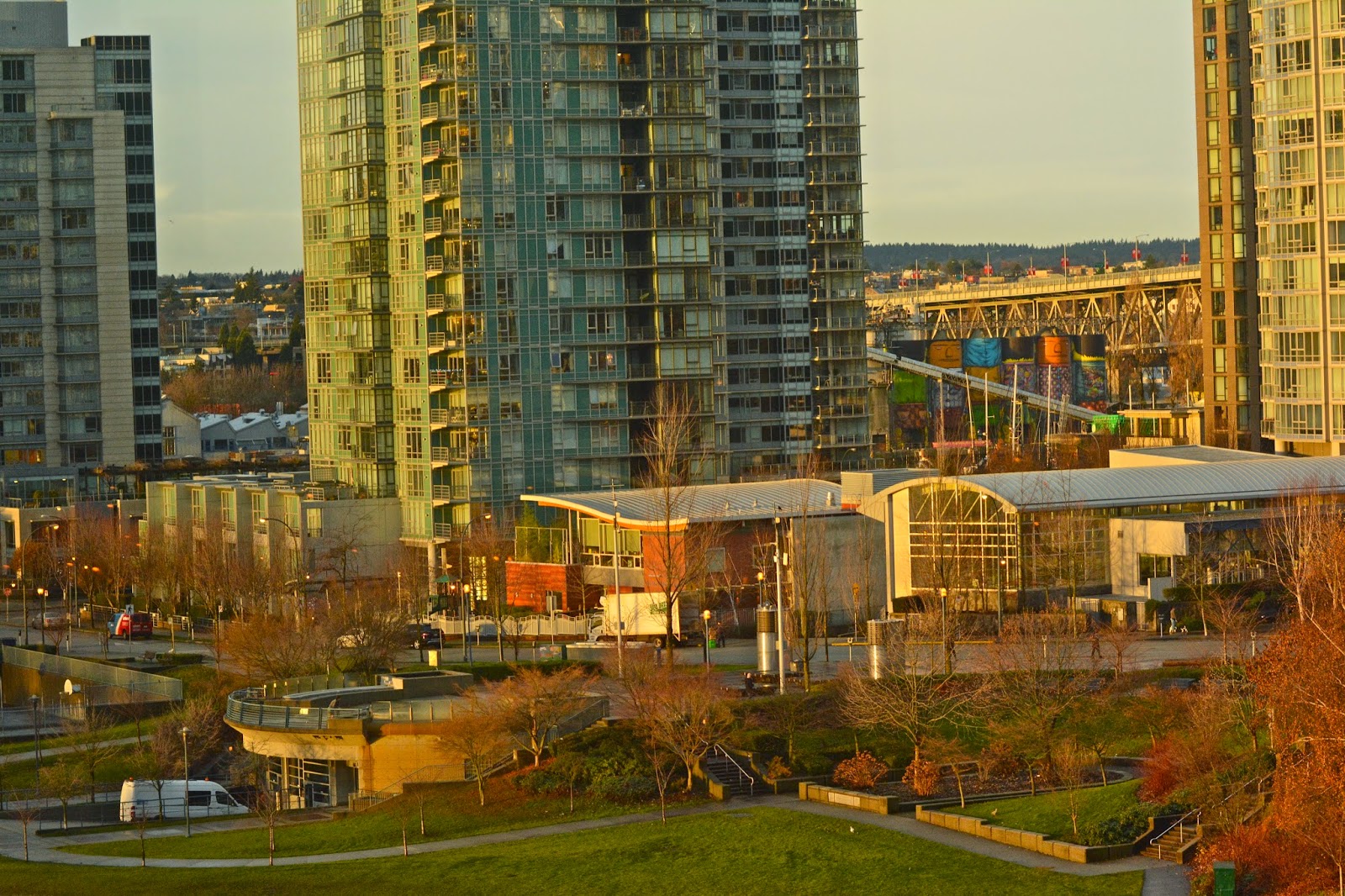 lesson after all.  I took a couple of photos of this crane before I left. 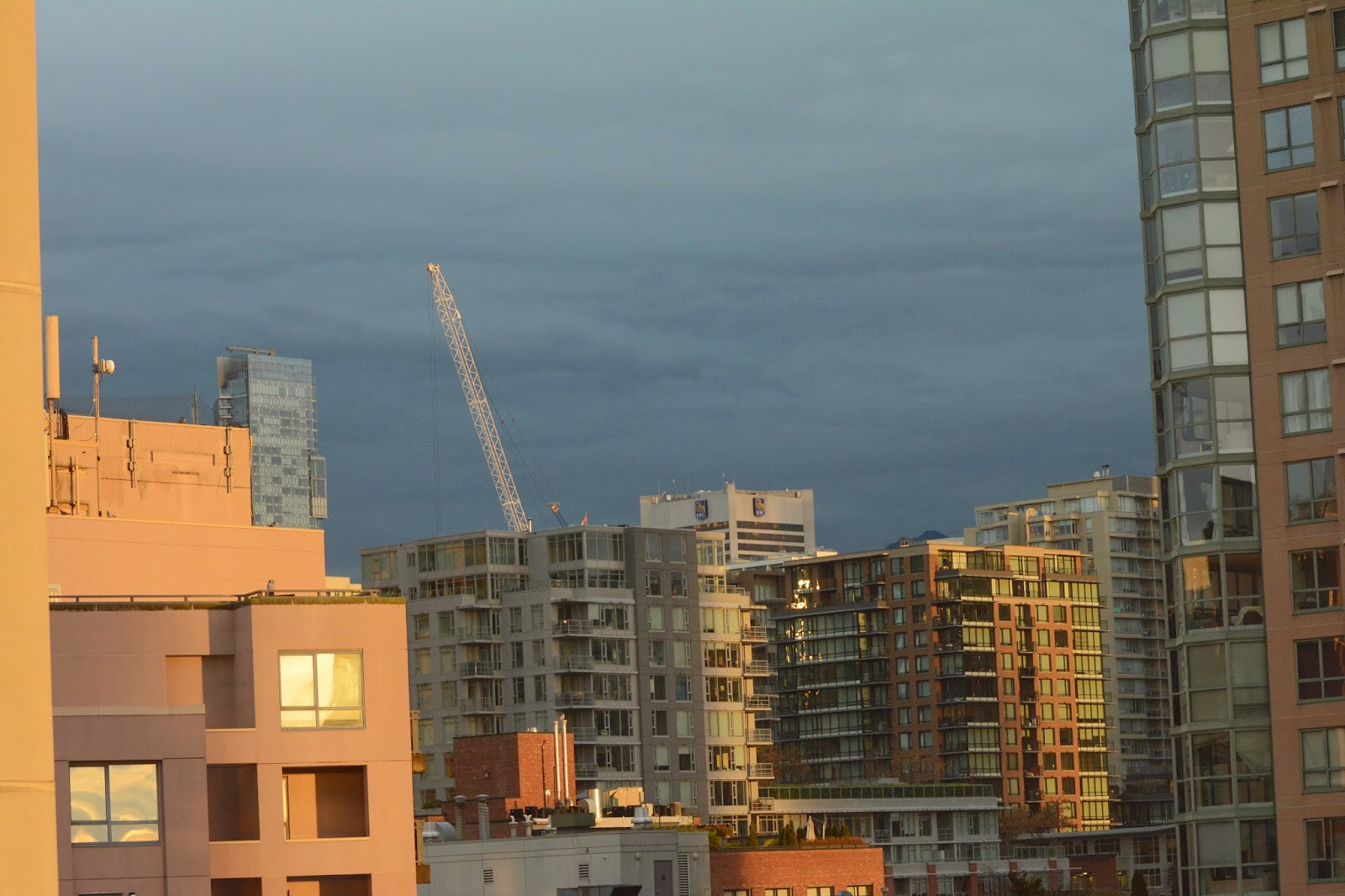 It has been decorated for Christmas, but that only shows up.. 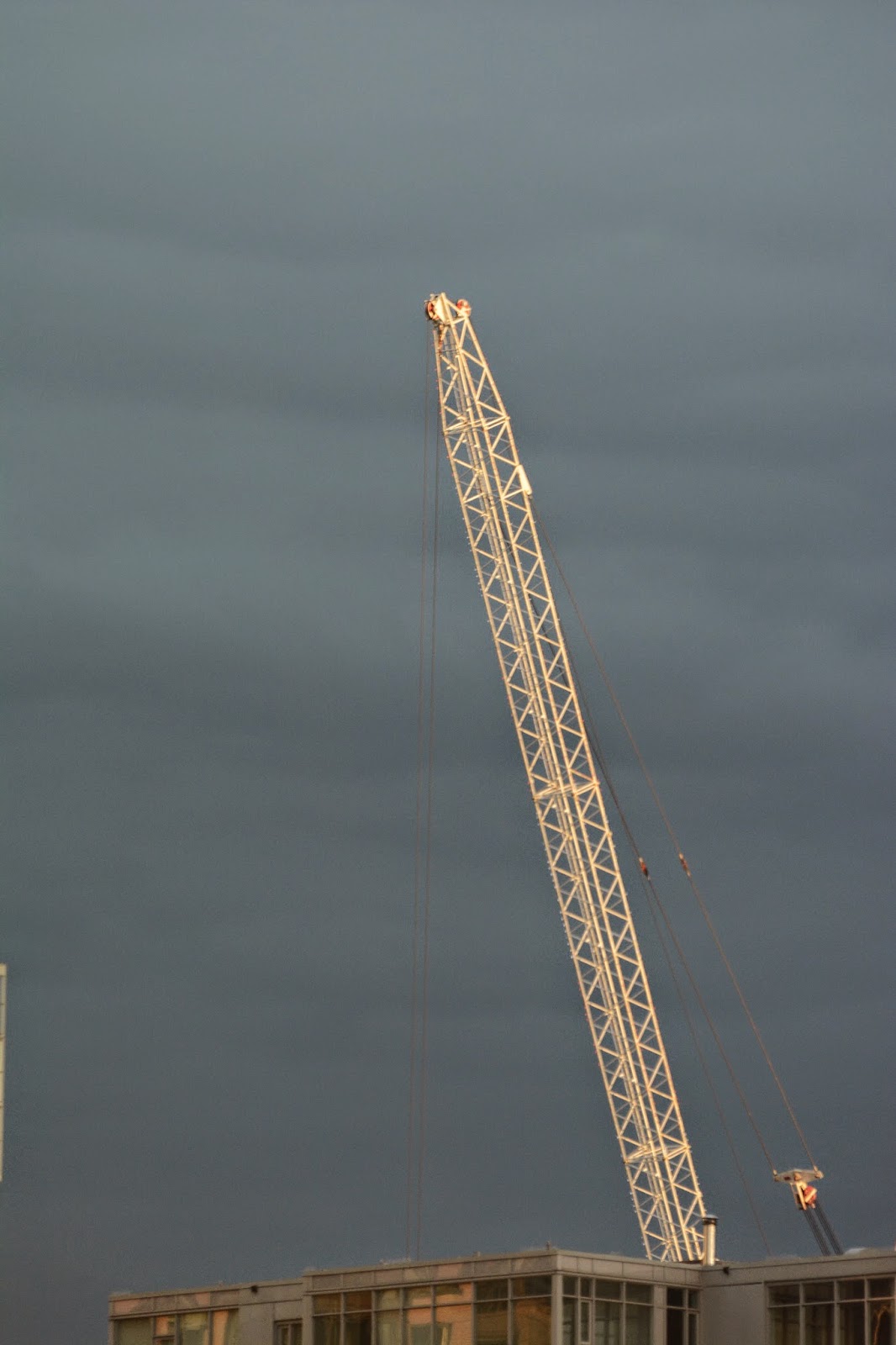 after dark, as I had discovered when I looked out our 8th floor window.. 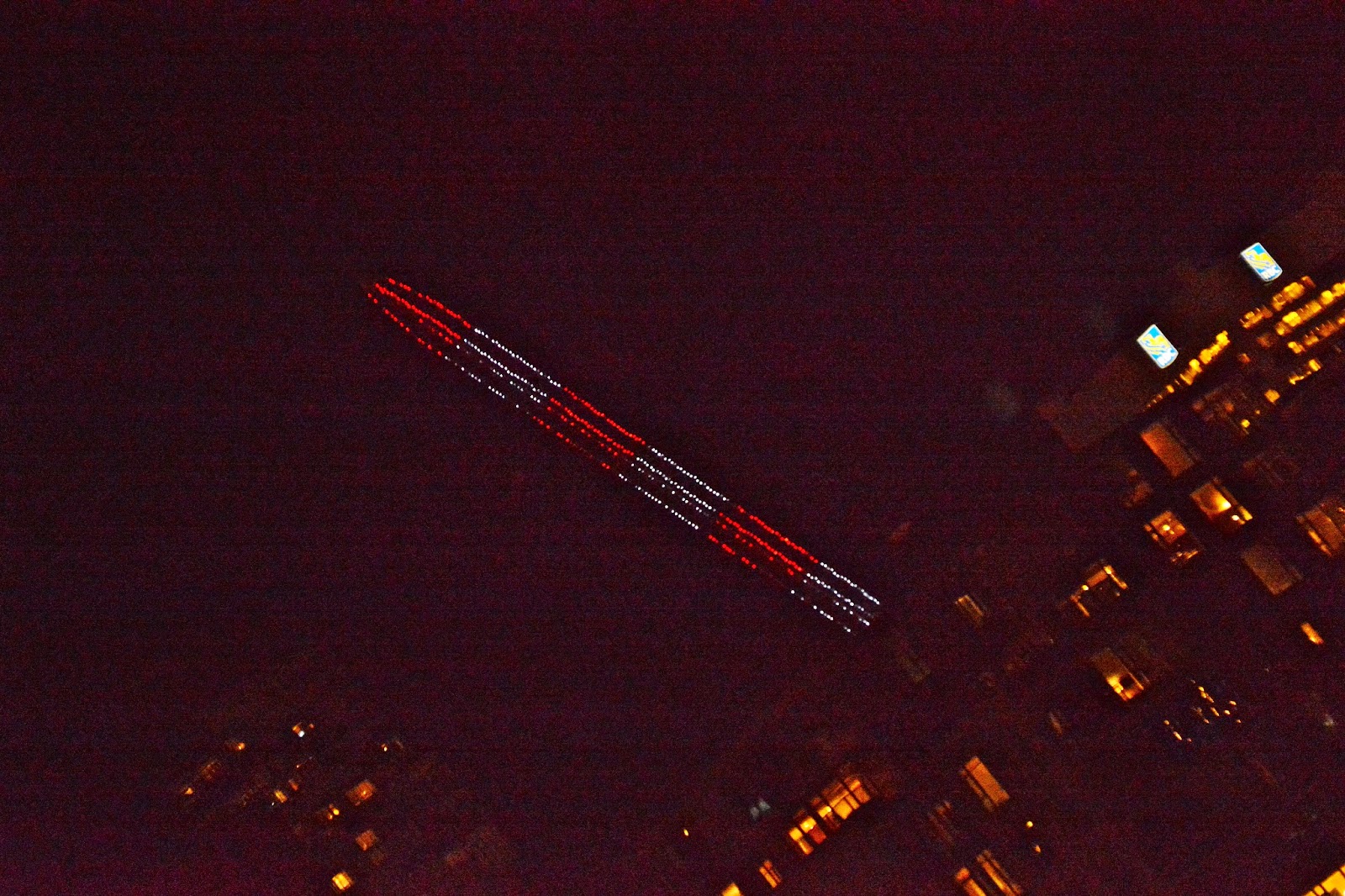 The piano lesson with Bogdan Dulu "left my brain reeling" (as I wrote to my sister this morning).  That is a very good feeling. He is such an articulate and thinking musician.  It is a gift to have the opportunity to study with him.  You can listen to him play the black-key étude by Chopin in this youtube, and immediately afterwards, an adaptation of that étude by Marc-André Hamelin.  Bogden is completing a doctoral thesis on Mr. Hamelin and will be performing some of his etudes in a lunchtime series at The Orpheum.  I'll update you when I have more details about that.


After the lesson, I rode home in the rain but had a little experience that, as I also wrote to my sister this morning, made me feel like a "real biker" :)  Such a simple thing, the idea of drafting behind another cyclist.  I do it every day when I ride behind Bill, but yesterday, I really understood how much energy that saves when I passed a fellow that seemed to be going slowly, and then discovered that I was suddenly working very hard to stay in front of him in a strong headwind.  I was happy when he passed me again, thinking that he must have been going faster than I realized.  He called out as he passed, "We'll take turns drafting."  Suddenly, I was again finding it really easy to keep up and then there was this breakthrough moment when I truly felt what it means to draft.

One of the best parts of the entire day was sharing my epiphanies of the lesson and of cycling with Bill.  He is the best listener.  I didn't take a picture of him yesterday, nor one of Black Jack, but they were, as always, vital to my day.  Black Jack had been off her food in the morning, something that happens very rarely but always scares me.  Bill took care of her while I was gone, and the problem, perhaps connected to a small piece of her bully stick struggling to make it through her digestive system, was resolved.  We both have decided to be more vigilant with the timing of her "free-chew" time each evening.  Ten minutes is about as much as she should have.  The stick, carefully supervised, is wonderful for her teeth, but if she has it long enough to pull off small strips, that could cause a blockage.  Lesson learned!

Bill and I walked, a little later, to Harrison Galleries.  A new painting by Stewart Jones was up that intrigued me.  It is titled Night Alley- Vancouver.  It appears to have orange shading in this, but in fact was in black and white.  I guess the high iso caused the colour difference. 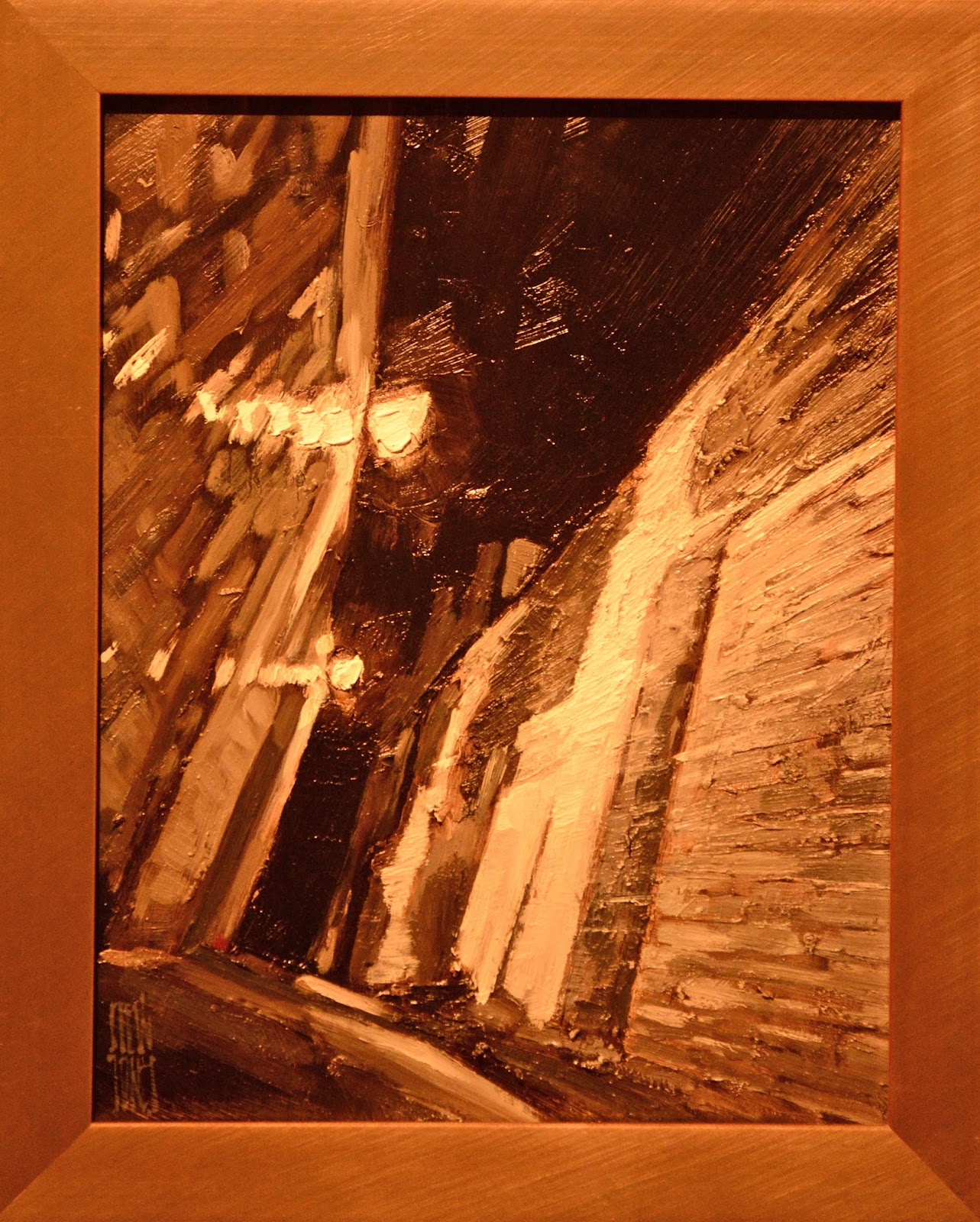 Here's the same painting against the background bricks. 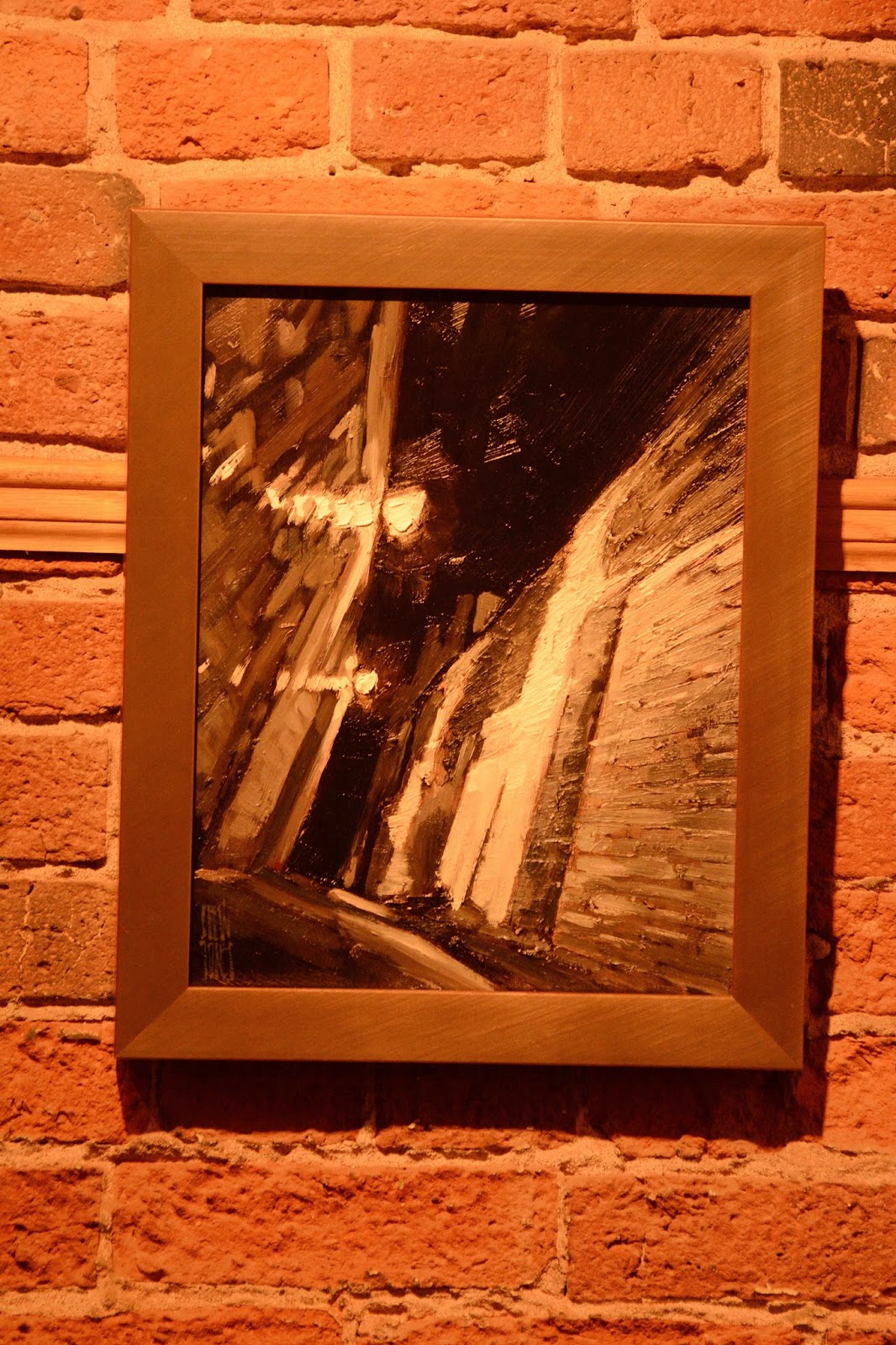 There was also a painting by Zbigniew Kupczynski leaning against a table.  It makes me smile.  I love the bright colours and.. 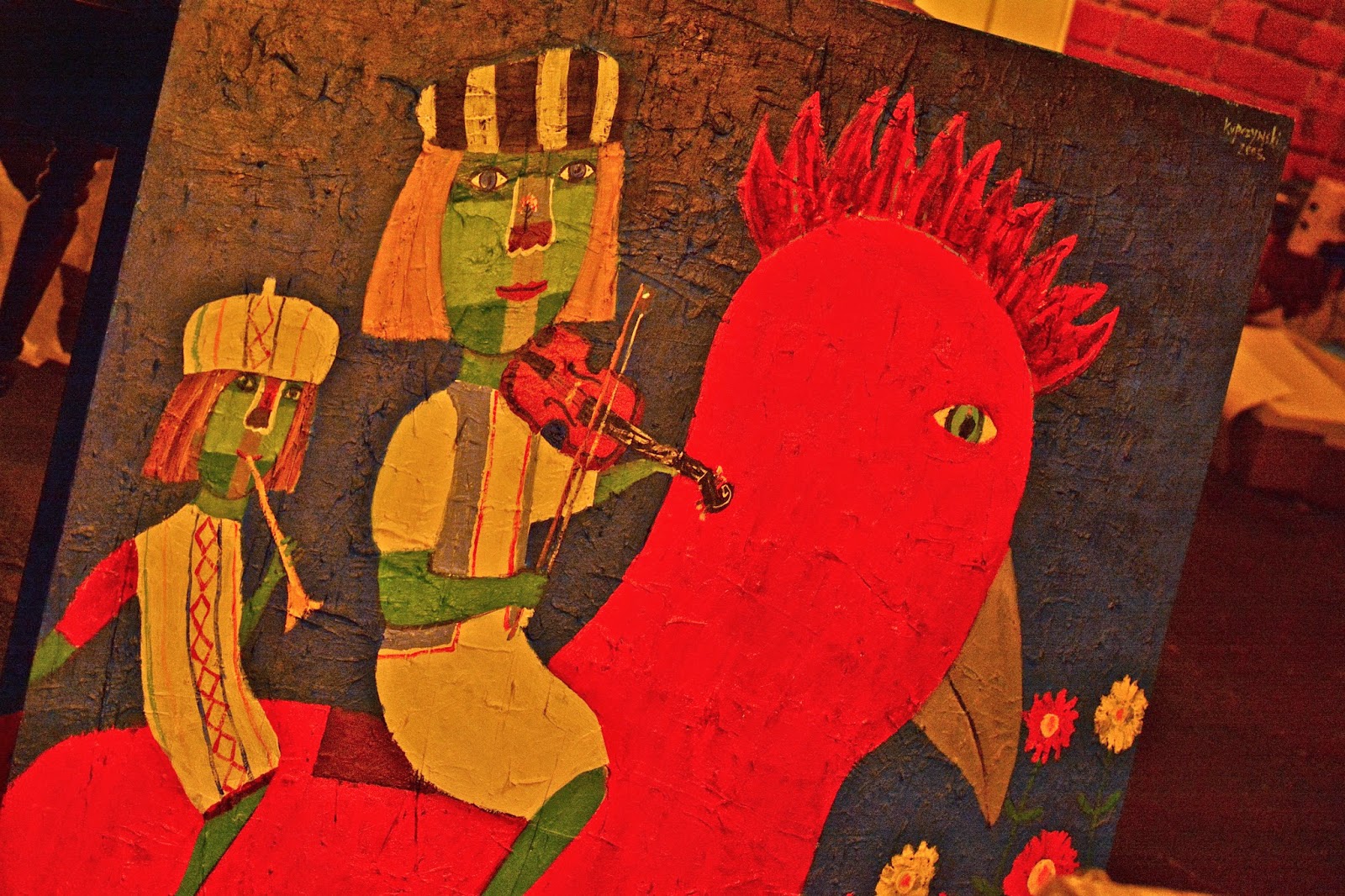 and I love the details of instruments, clothing, bird expression, flowers.  We met this artist.. 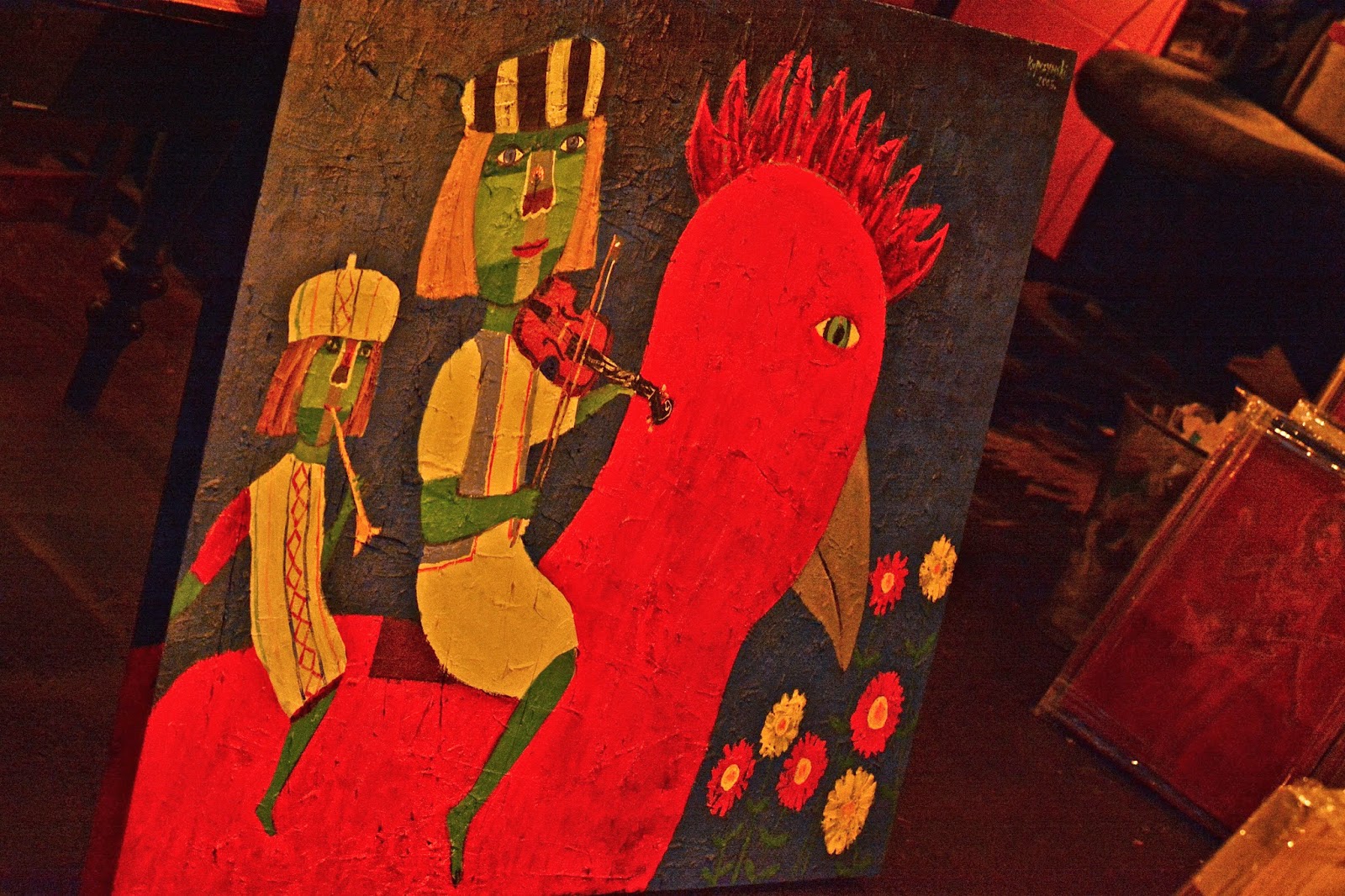 one day with his wife, Eva, and their dog, Frankie, sitting on a bench along False Creek.  I believe most of his paintings are of his wife.  She is an artist as well.  I posted about them here.  This morning, I found this video that gives a sense of where Mr. Kupczynski is coming from.  These are a few of the things I have been thinking about over the past few days.  Many thanks for allowing me to share them with you.
Posted by Black Jack's Carol at 10:59 AM