Some Fences, Some Rain, Some Fun

I saved photos taken on Wednesday and Thursday for TexWisGirl's Good Fences meme.  Thanks, Theresa, for hosting!  I'm not so sure they're "good" fences but they certainly are numerous.  I've posted a map of False creek before, but will show two versions here, the 1st easier to understand, and the 2nd with smaller print and more detail, for anyone interested. 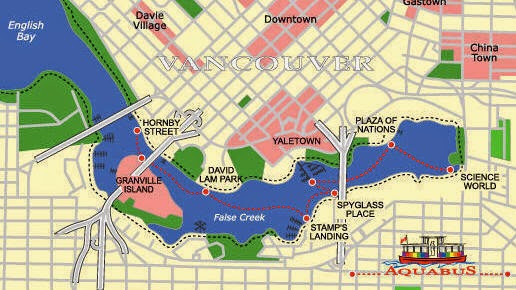 Our cycling route on Wednesday started at David Lam Park, continued (moving to the right) around Science World, stopped at Hinge Park (not shown but it's that little bump between Science World and Spy Glass Place) where Black Jack usually runs (on the 2nd map, it's a bit to the right of #10), and then continued to Granville Island where we took the ferry to Hornby Street and then back to our starting point. There are two ferry businesses (False Creek Ferries and Aquabus).  The 2nd map shows routes for both.  They often overlap but there are some important differences like the fact that the False Creek Ferry goes out into English Bay and to Vanier Park.  On the 2nd map, the little line crossing between #16 and #18 is the ferry route we took.  That boat is designed to accommodate bicycles and is the quickest way to cross False Creek without riding over one of the bridges.  There is sufficient business to keep both ferry companies busy and I've always felt they cooperate rather than compete with each other.  Black Jack knows all the ferry stops and loves to take them.  If we are walking, she tries to lead us down each ramp :)

And now, for the fences.  From Hinge Park, we looked south to see fences on apartment balconies, on the seawall and on the Cambie Bridge. 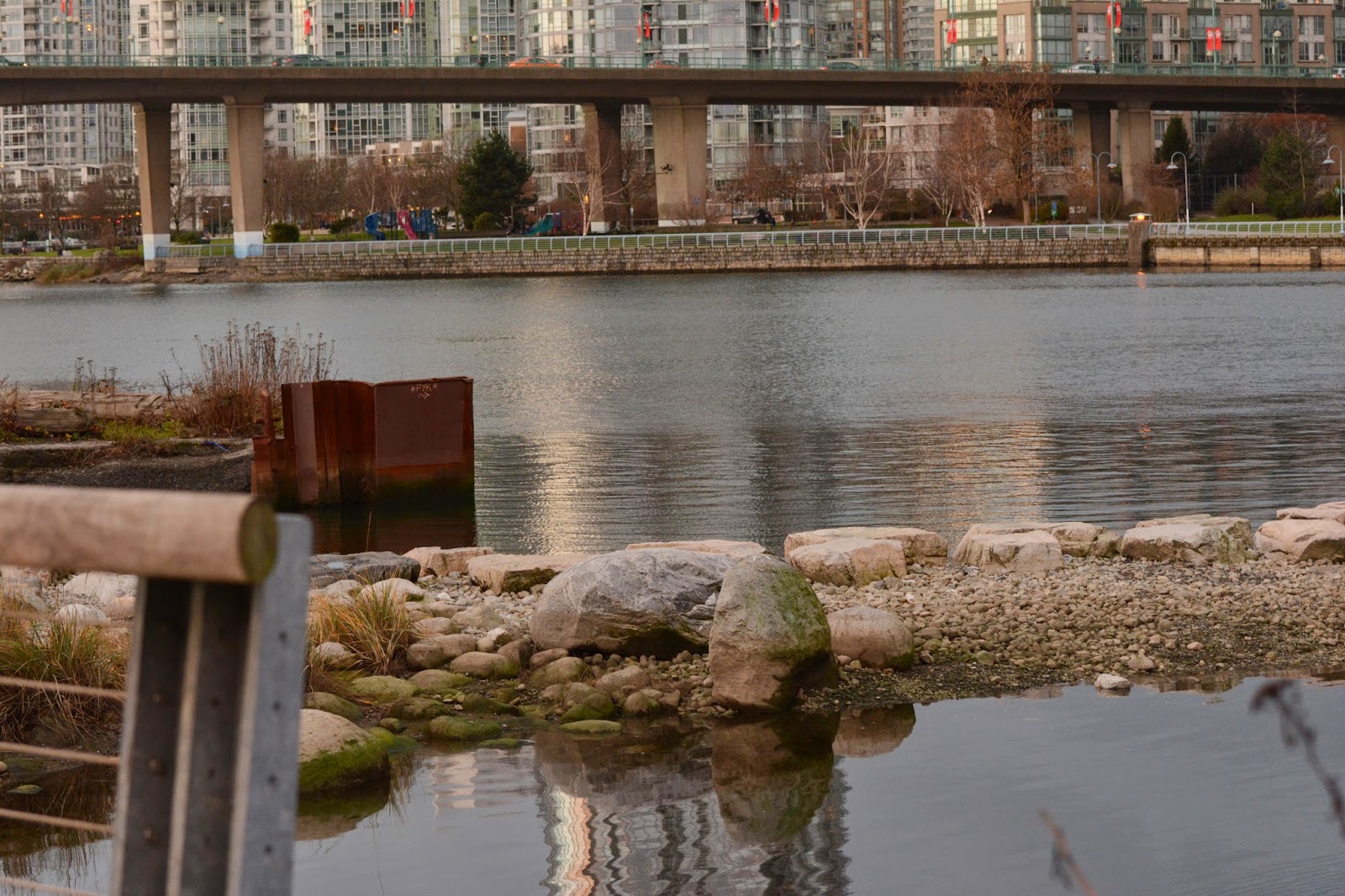 The fence at the front of the photo is on a small bridge along the bike/pedestrian route. 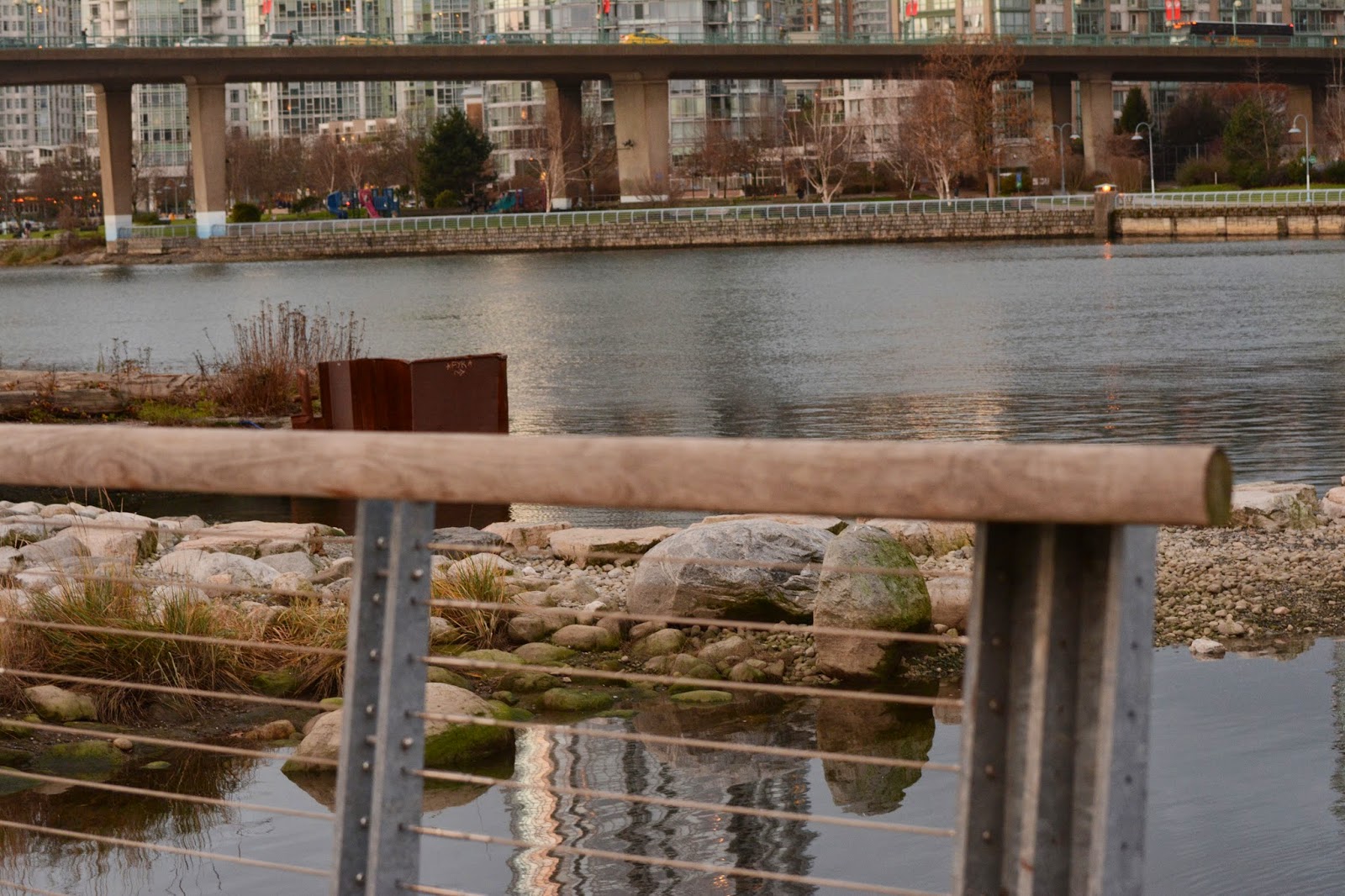 We rode most of the way around the creek, and then took our bikes (and Black Jack) on the Aquabus to travel back to the north side of False Creek.  When we got off the ferry, we looked over the fence and back at Granville Island to enjoy lights strung along this yacht's deck.  The candy-cane lights at the front and blue outline stood out against the night sky. 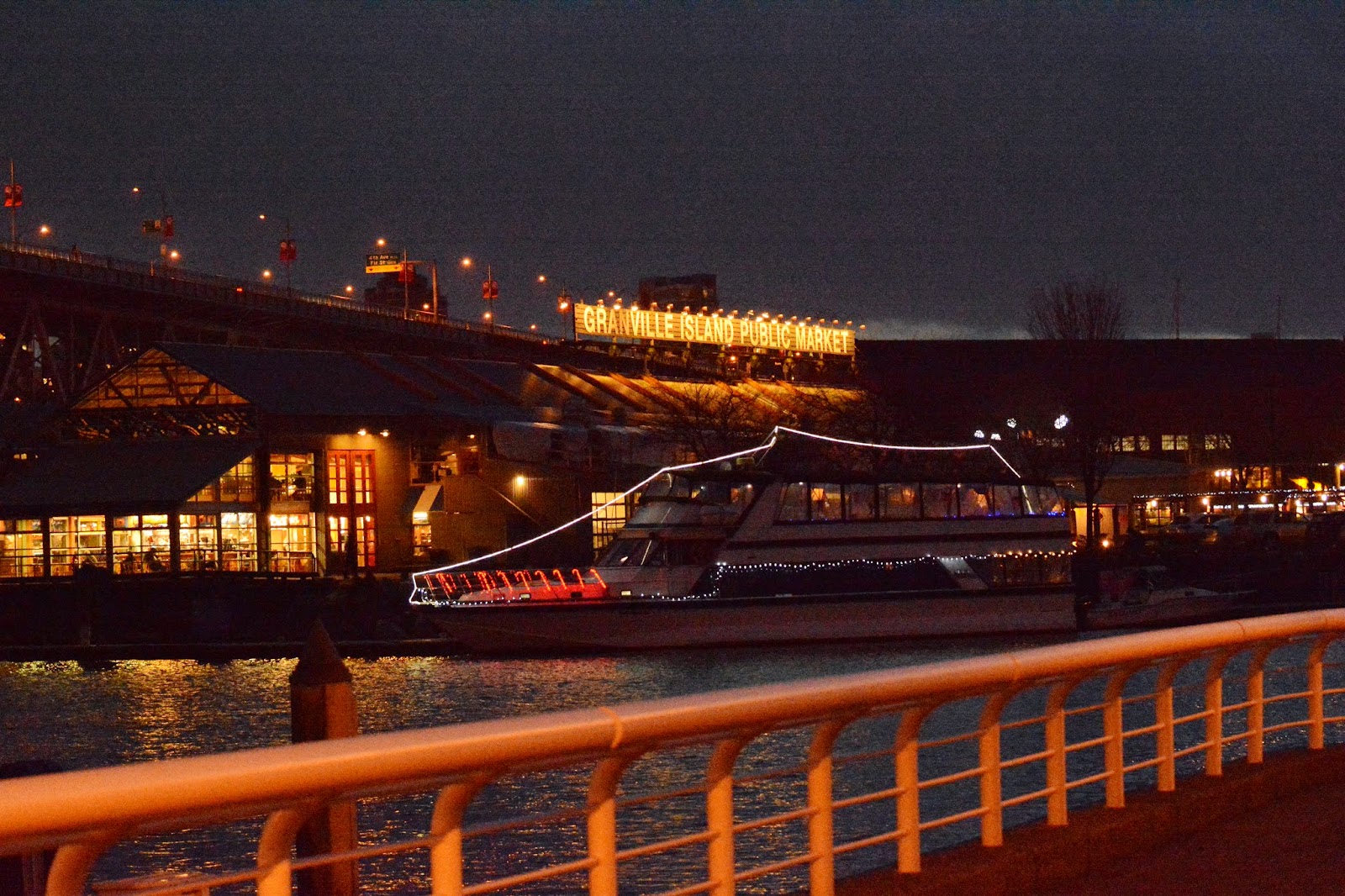 My final fence-shot that evening was of the Burrard Bridge. 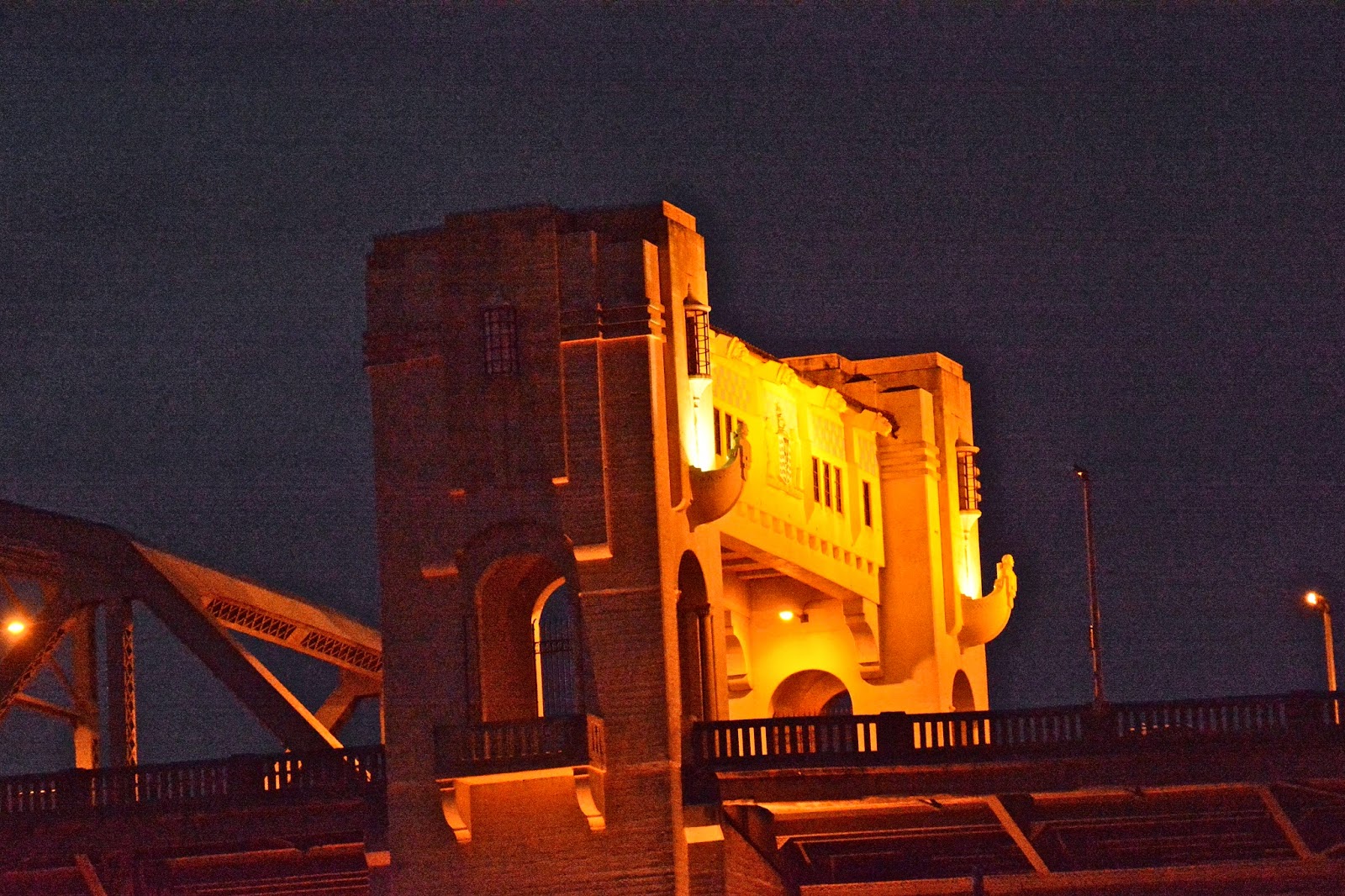 There was lots of rain yesterday, but it stopped for a few minutes and we thought we might be home free.  We took Black Jack down to the David Lam ferry dock as there's another great running spot for her close by.  I had her bundled up in her coat plus my old bike jacket.  The Cambie Bridge is behind  Bill and the ferry ramp has a maze of fences. 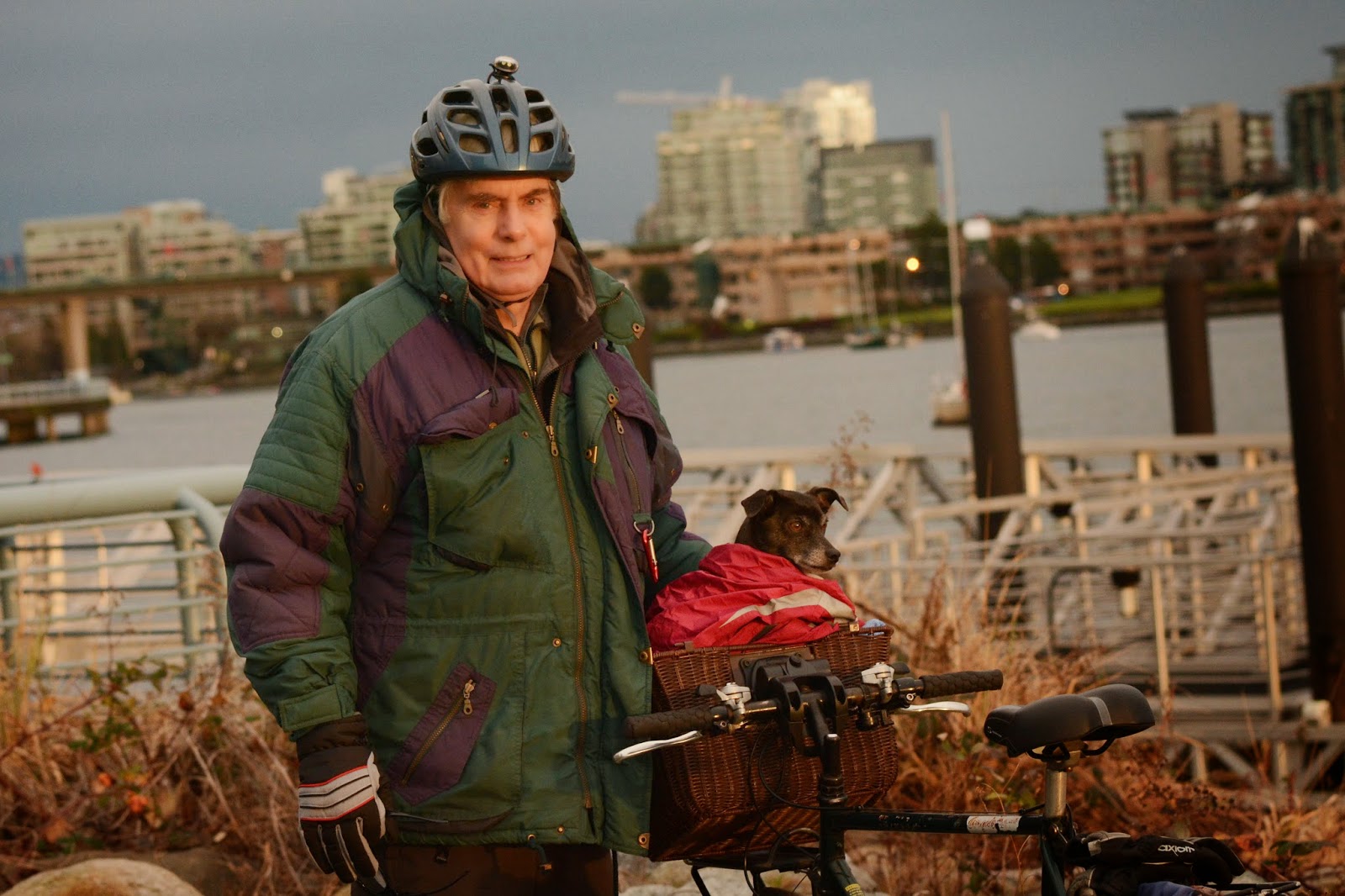 Looking to our right, the sky became quite dramatic.  You can see the Granville Bridge, reflections in the building's window, and once more, a maze of fences all about. 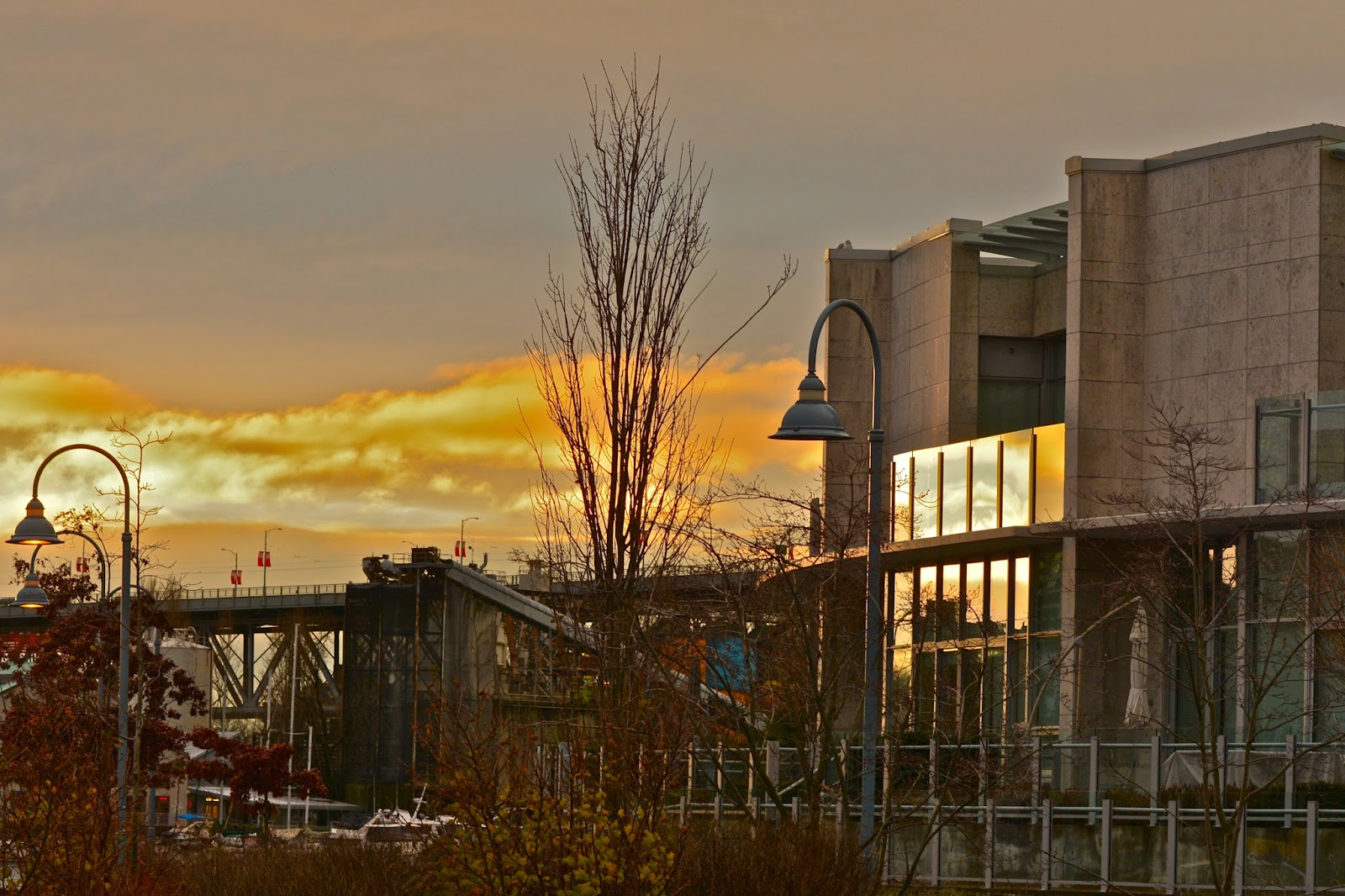 Bill's expression here makes me smile.  He's being very patient, but in fact, the rain was about to begin and he was trying to manage the two bicycles and Black Jack (hoping to get a little run in for her before the rain started) and of course, he still had to look good for the camera :)  He does well, don't you think, but I see "Okay, let's get this done," in his eyes. 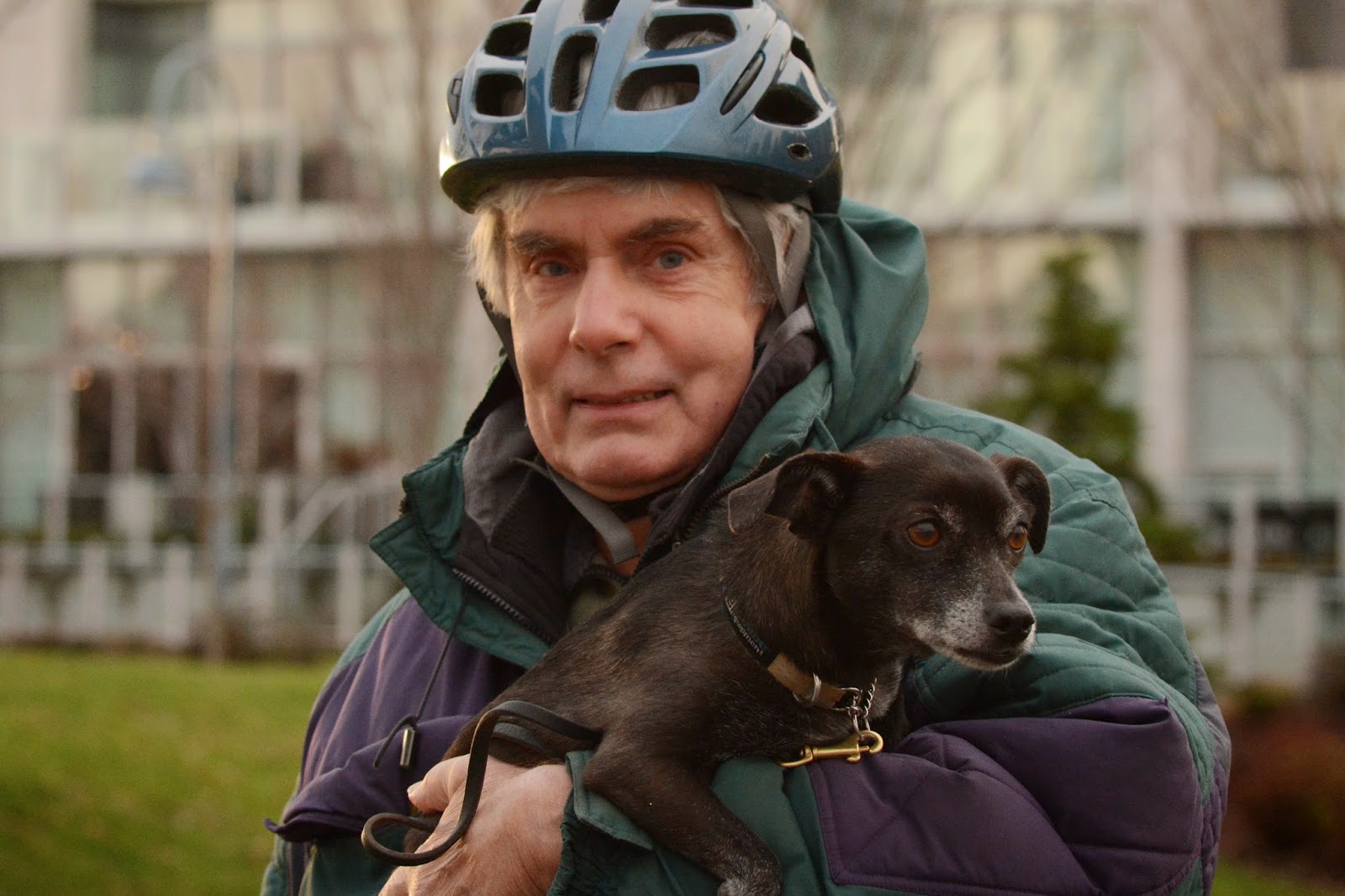 We just barely squeezed in the run when the rain hit in earnest, so there were no more photos.  (And, I know this is TMI, but it has to be said.  That bag in the grass beside Bill is another dog's waste that he picked up.  The man is a prince!  He checks out the fields where she runs and always cleans up for her and for us.  But people..  please..  I beg of you..  do pick up after your dogs.  It's the right thing to do!)  We managed to get Black Jack bundled into her basket and rode in pelting rain and wind to Harrison Galleries only to find out that they were closed for a special occasion.  Undaunted, we got back on our bikes and headed to a second-best option.  All to say, we made the best of a rainy day, completed a crossword and a sudoku puzzle, did some reading later in the evening and called it a good one.  Today, there is only a tiny bit of rain in the forecast.  Yay!  Oh, and the fences? Well, there is one to be seen in every single photo today.  They won't win any contests but they are there :)  I'm just squeezing in under the line to post to Theresa's meme.  Check it out.  You won't believe the variety of fences people around the world find and enjoy.  Many thanks to each one of you for stopping by! 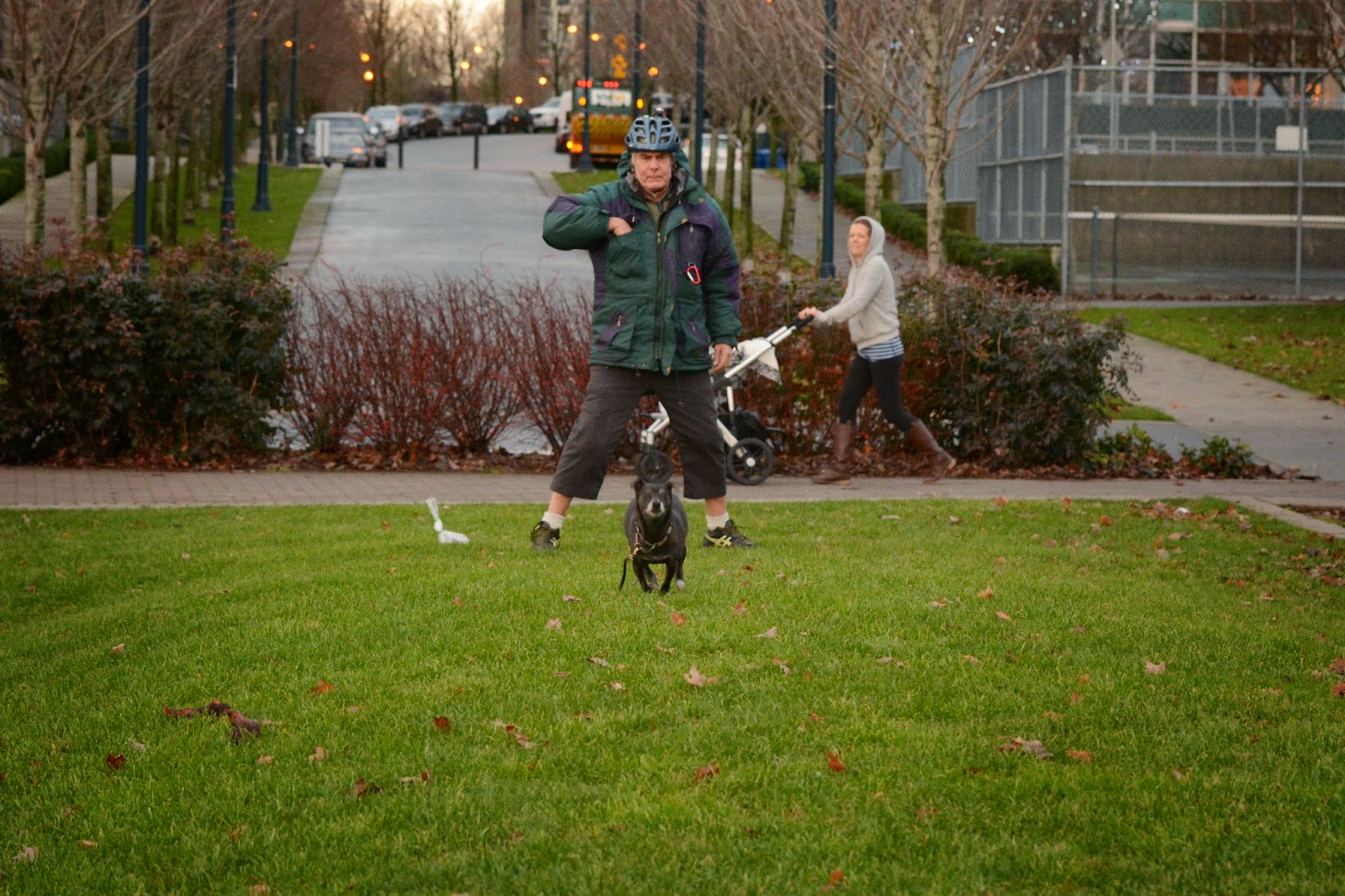