My camera and my arm/shoulder both have issues (we fell together on Sunday) that haven't been fully identified since neither of us have consulted an expert, but Bill, Black Jack and I were able to get out and about yesterday, albeit for shorter distances and with a wee bit of grouchiness on my part when it became obvious that at least the camera will need some professional help.  Let's just say the shots today will be "artsy" ones.  I guess you could call it an addiction when a day without photos feels like a day missed.  I'll call it a positive addiction but admit it's beginning to teeter across the line to an obsession requiring the services of yet another specialist to correct.  :) I'll share our slightly quirky day with Our World Tuesday, extending many thanks to both the readers of that meme and the hard-working hosts for humouring my attempt at humour. 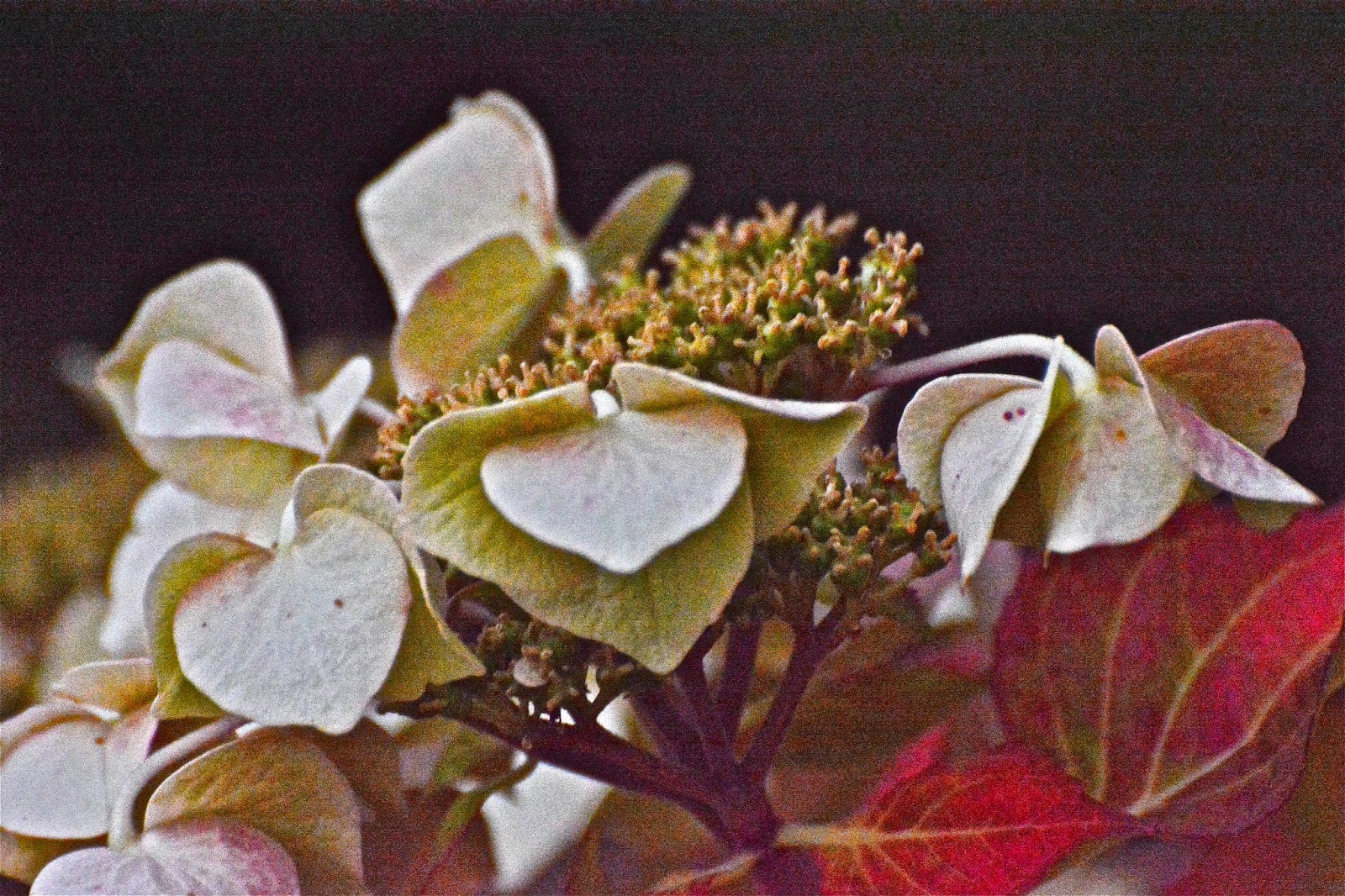 glimmered out of the darkness last night.  I should add that the iso was up to the max, so the graininess is more a photographer than a camera issue. 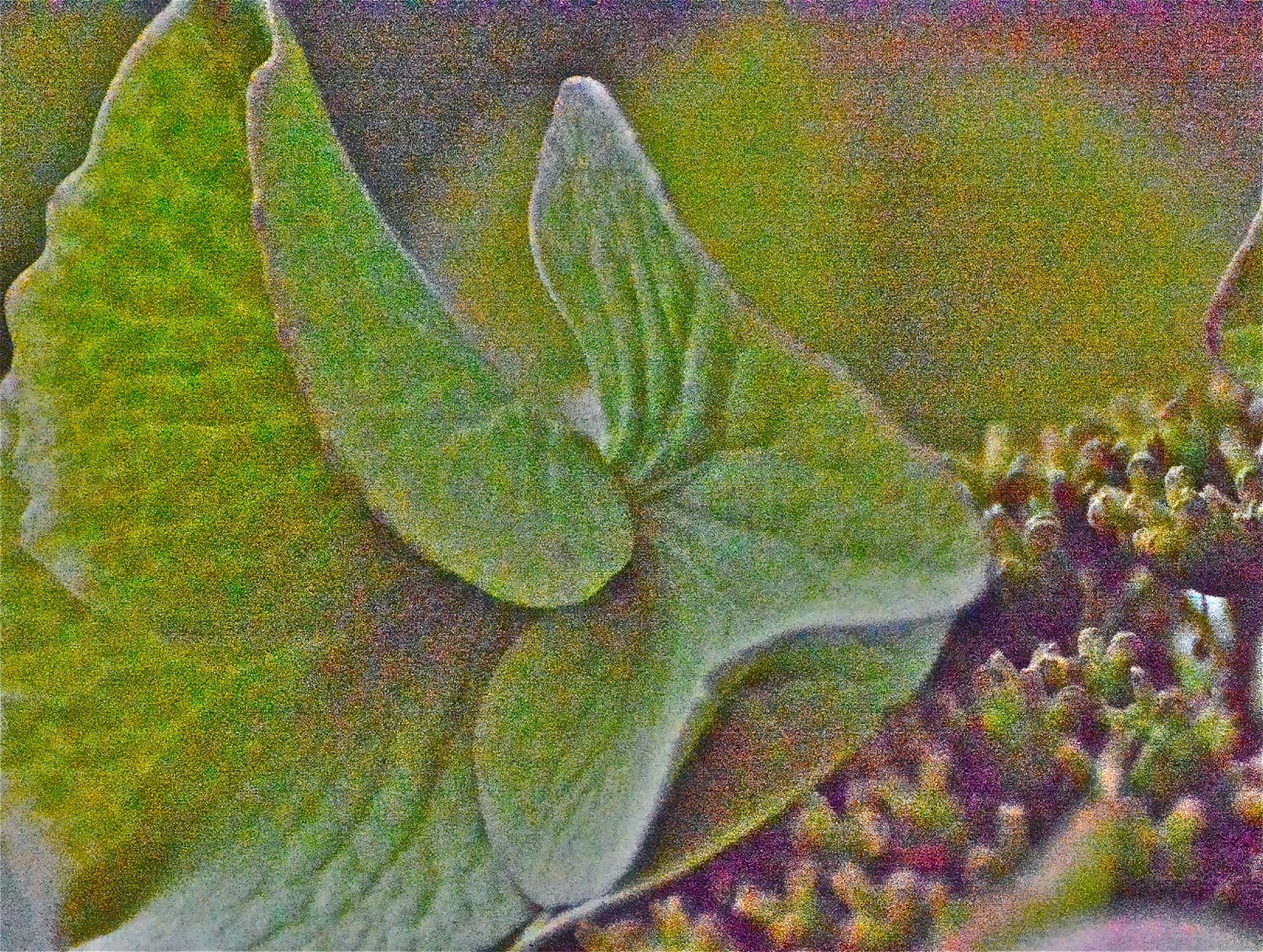 Throughout our walk, the cries of unusually large gatherings of ducks, seagulls and geese rang out, rather piteously, it seemed to me, and heard even over.. 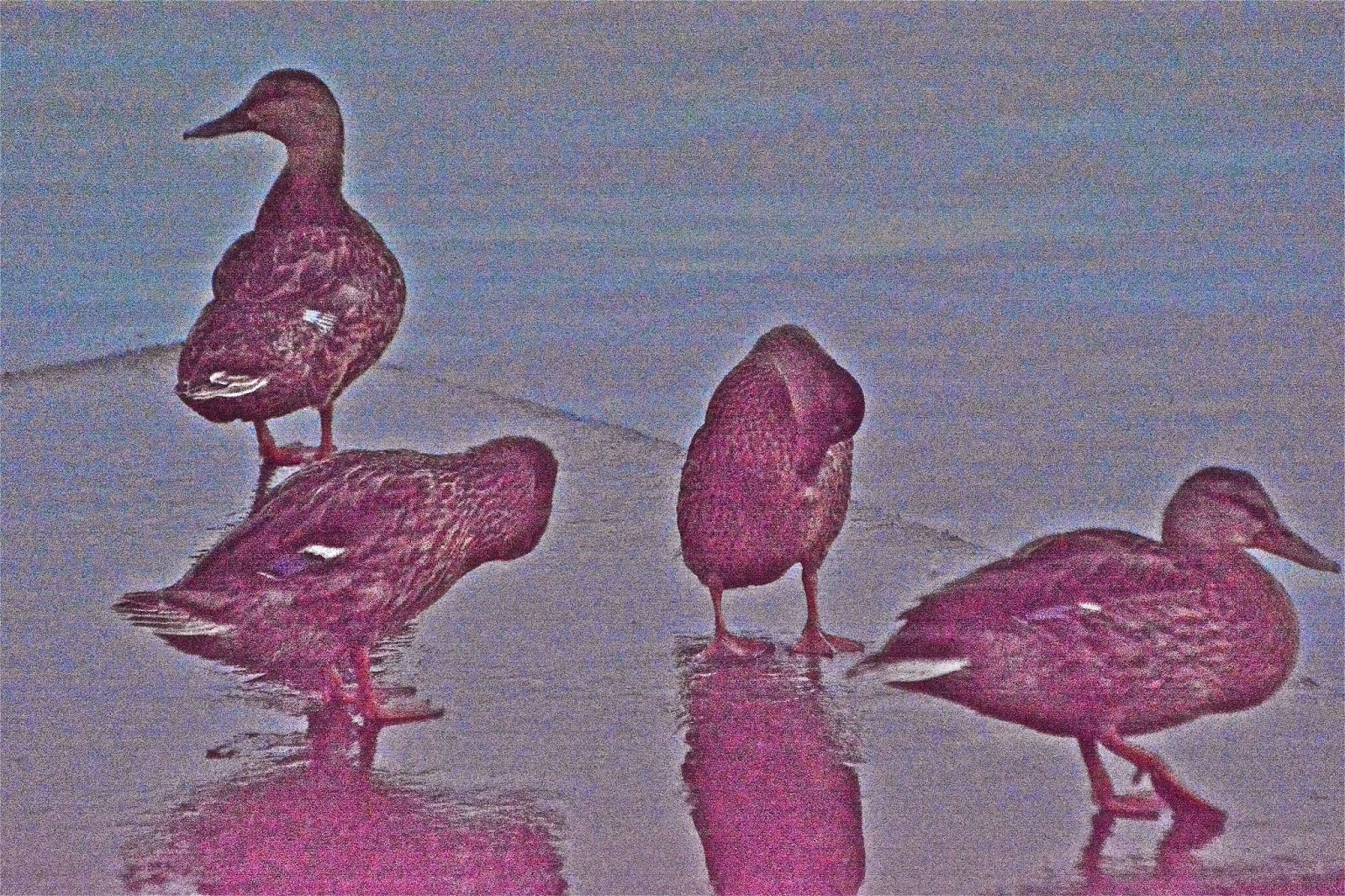 the roar of the air ambulance that we note several times daily as it travels to pick up patients needing Vancouver General Hospital's help.  Even the 300 mm lens catches a bit of the life of the hospital, all too familiar to me now, after Bill's illness (different hospital for him) and after my own accident several years ago that required cranial surgery.  In fact, my room could well have been the one with the light on, and where you can see someone looking out the window, just over the helicopter.  I remember looking at the landing pad, and having no idea of the life and death drama taking place around it, pretty much every single day.  Now, I make a silent wish every time I hear the helicopter for the well-being of the person being transported.  For more on that hospital, there is an excellent series on Knowledge Network. 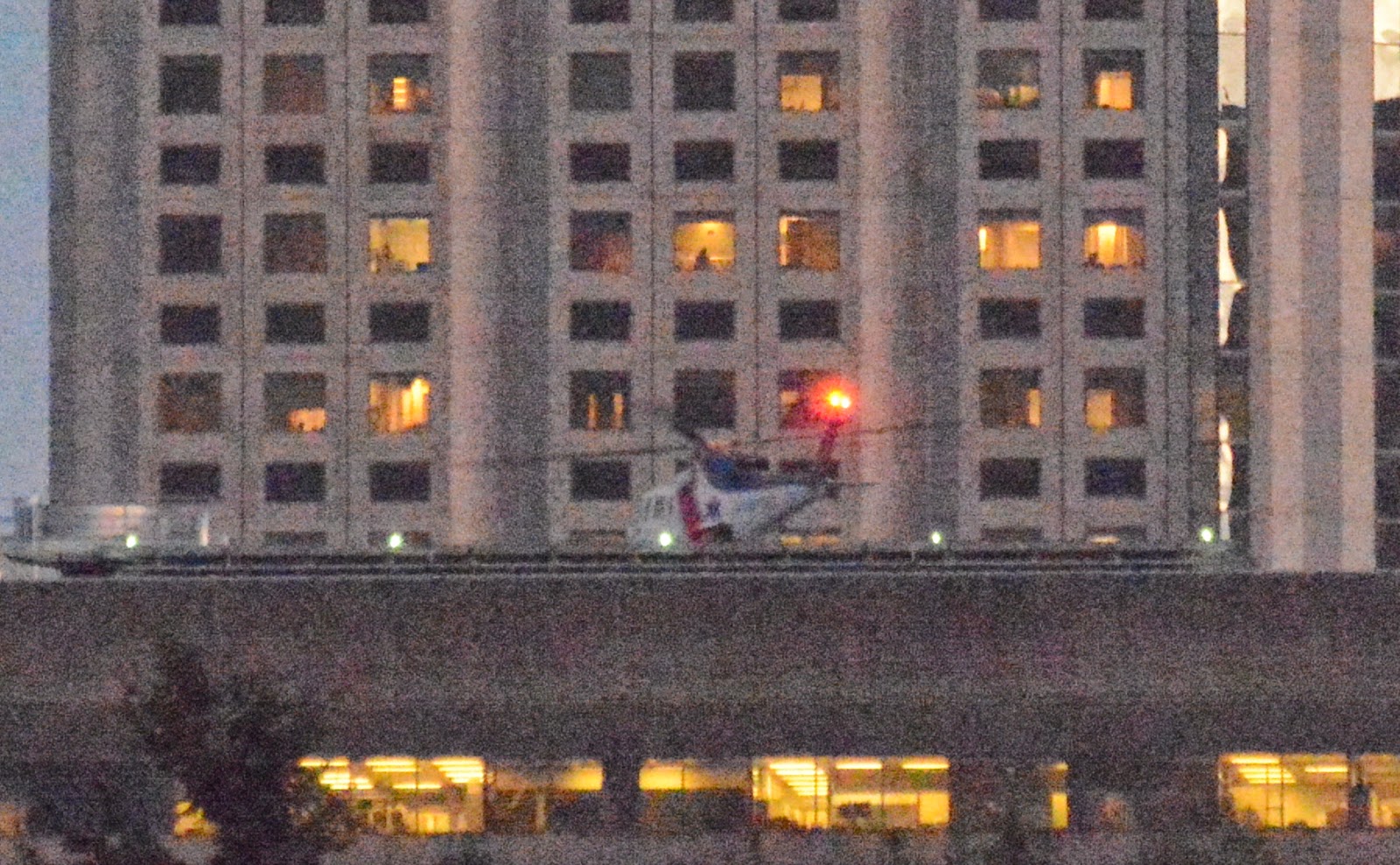 This is just a small portion of the huge..  I mean, really huge.. gaggle of geese that travelled about last night. 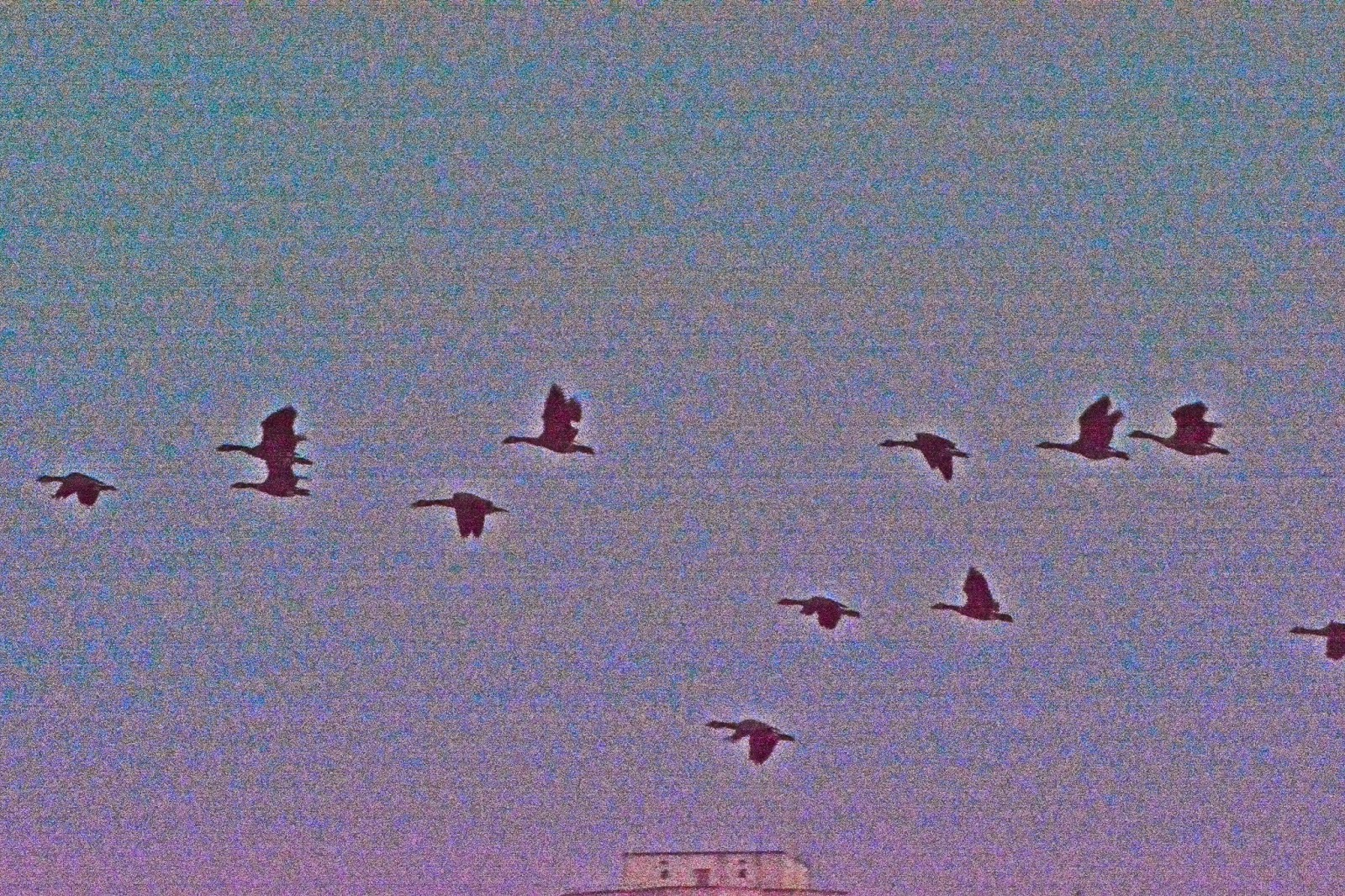 There's the hospital again, with a fuller view.  Can you see the little tiny helicopter at the bottom of the second column of floors from the left? 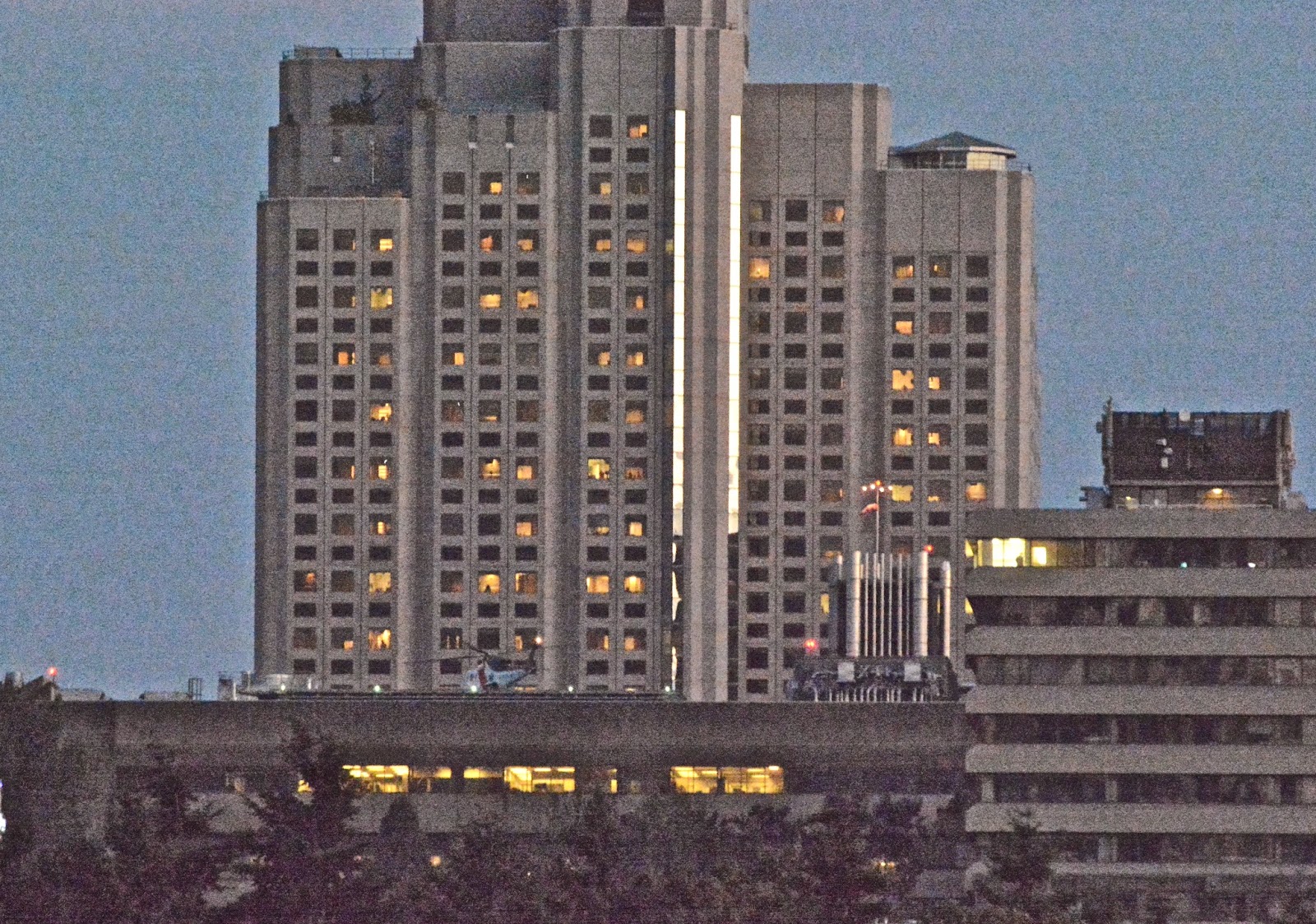 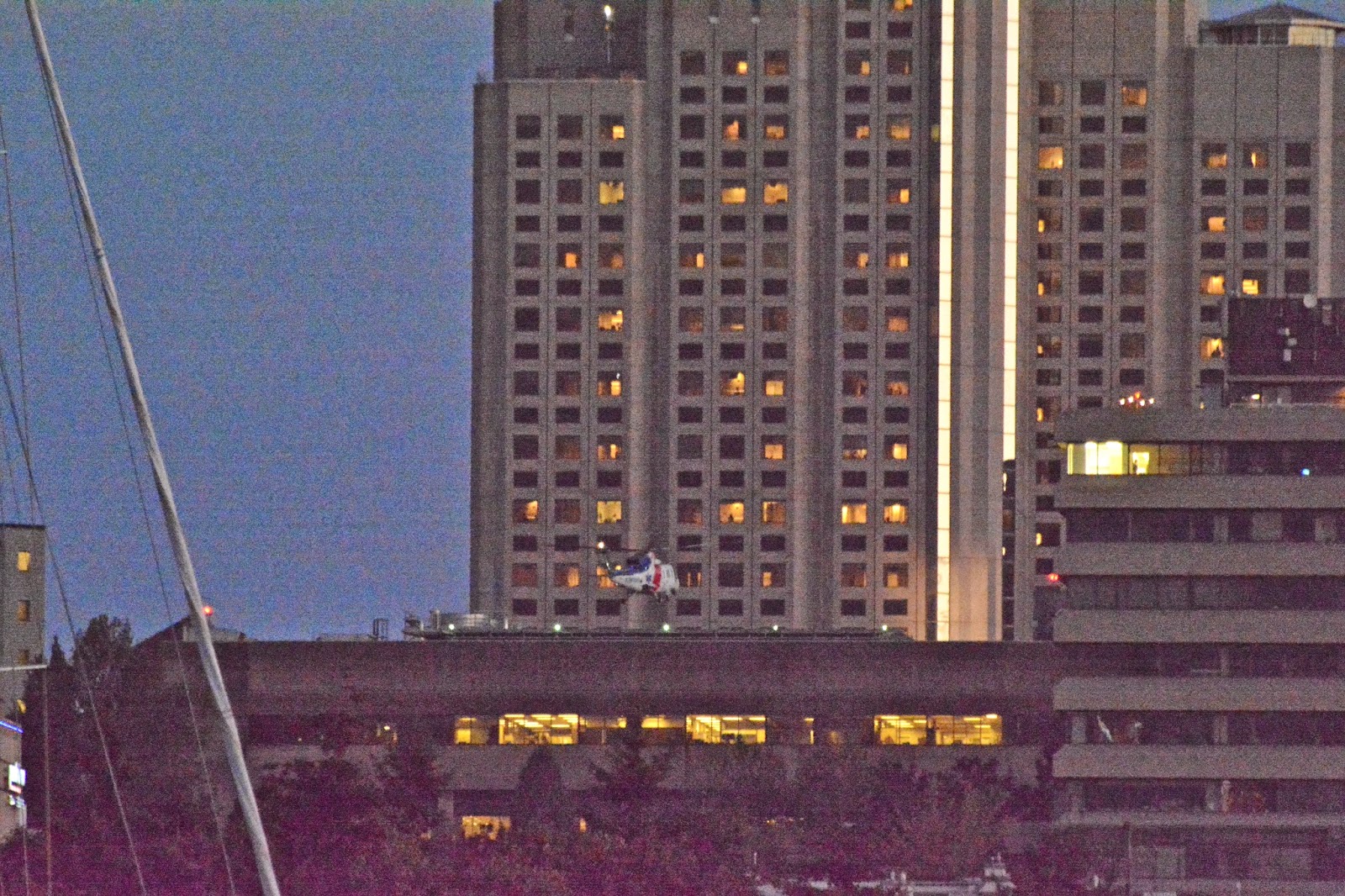 even as the geese come into view at the top left. 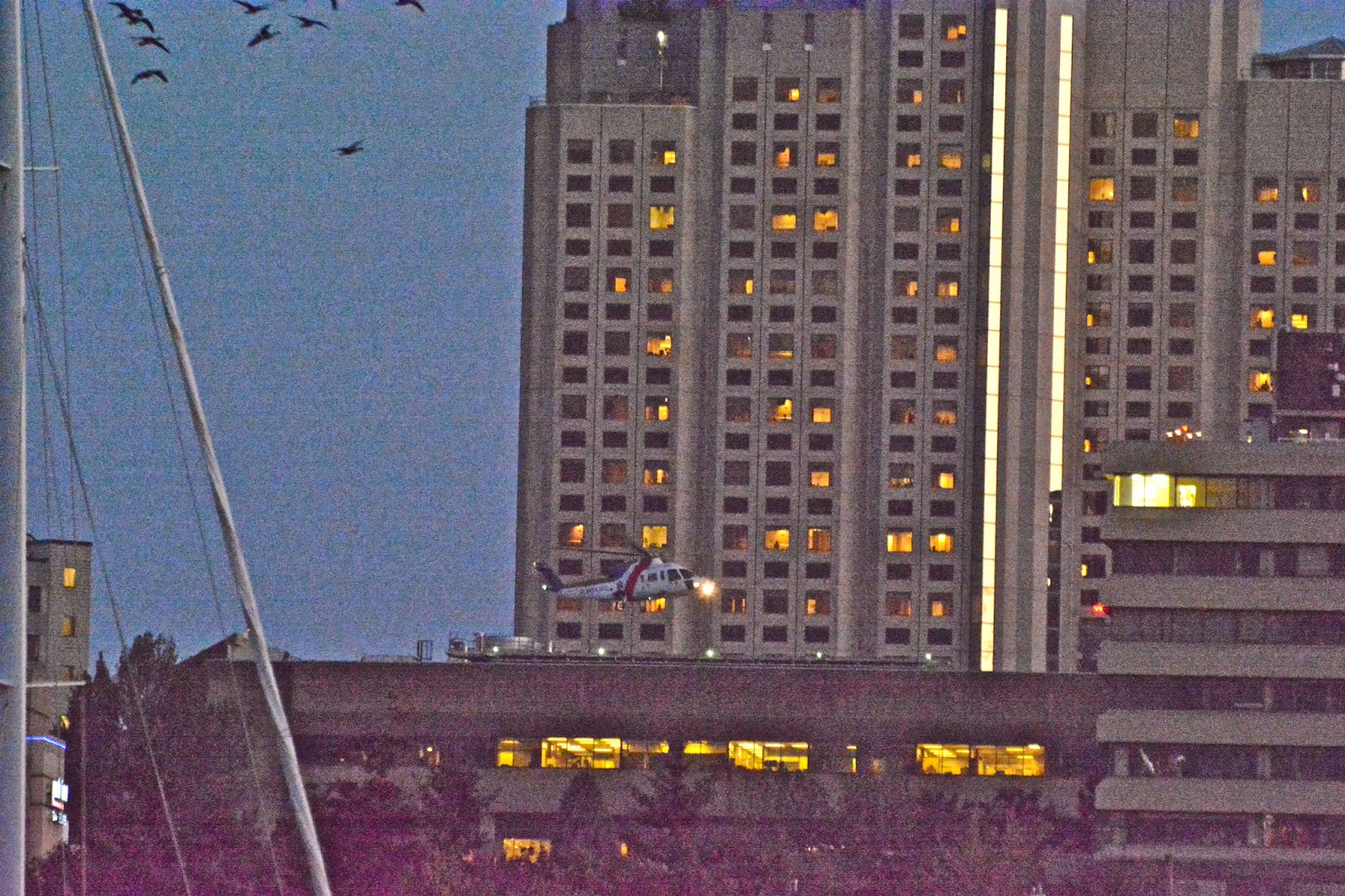 Almost into the air, lights so bright they almost blind us, 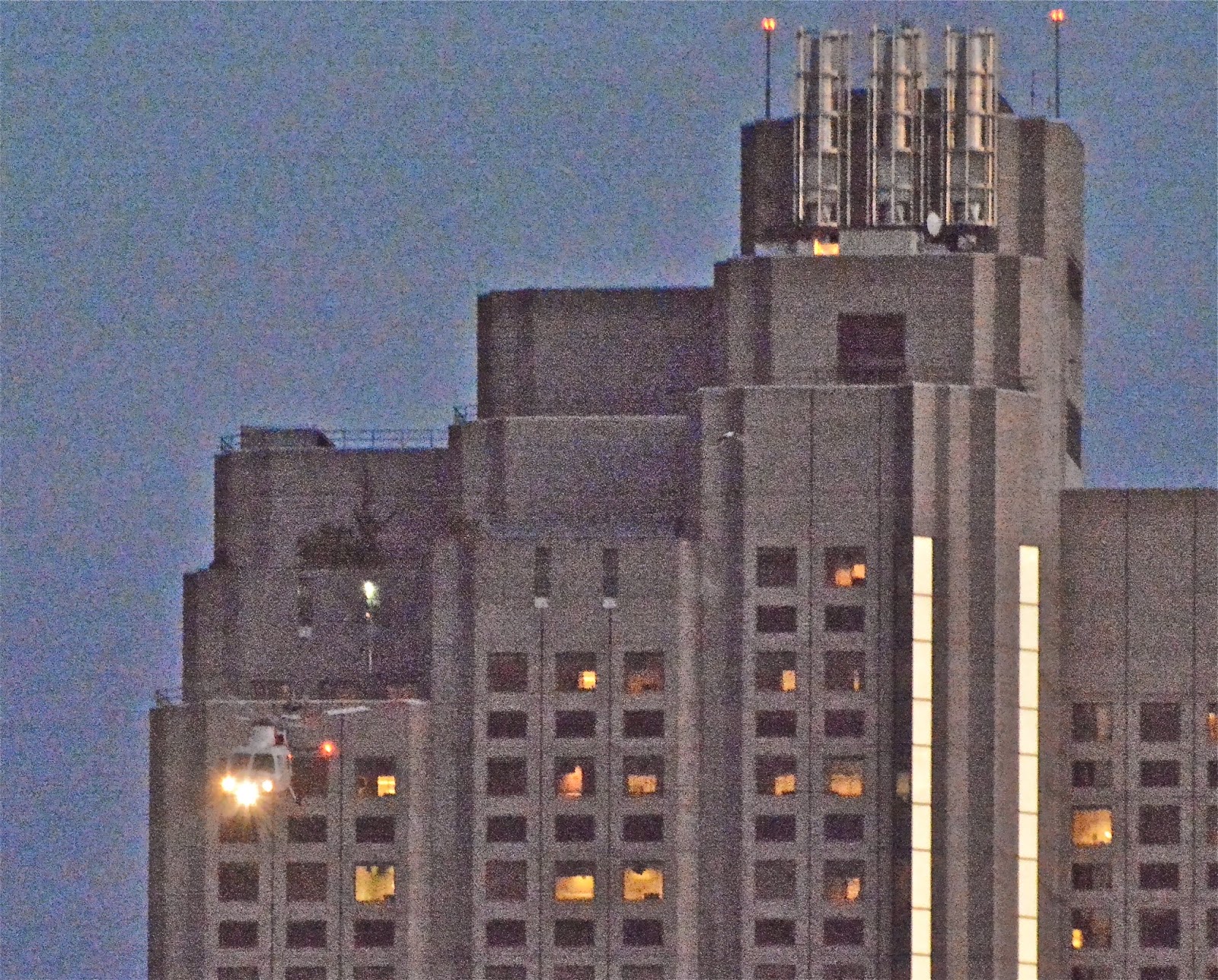 and there she goes.. 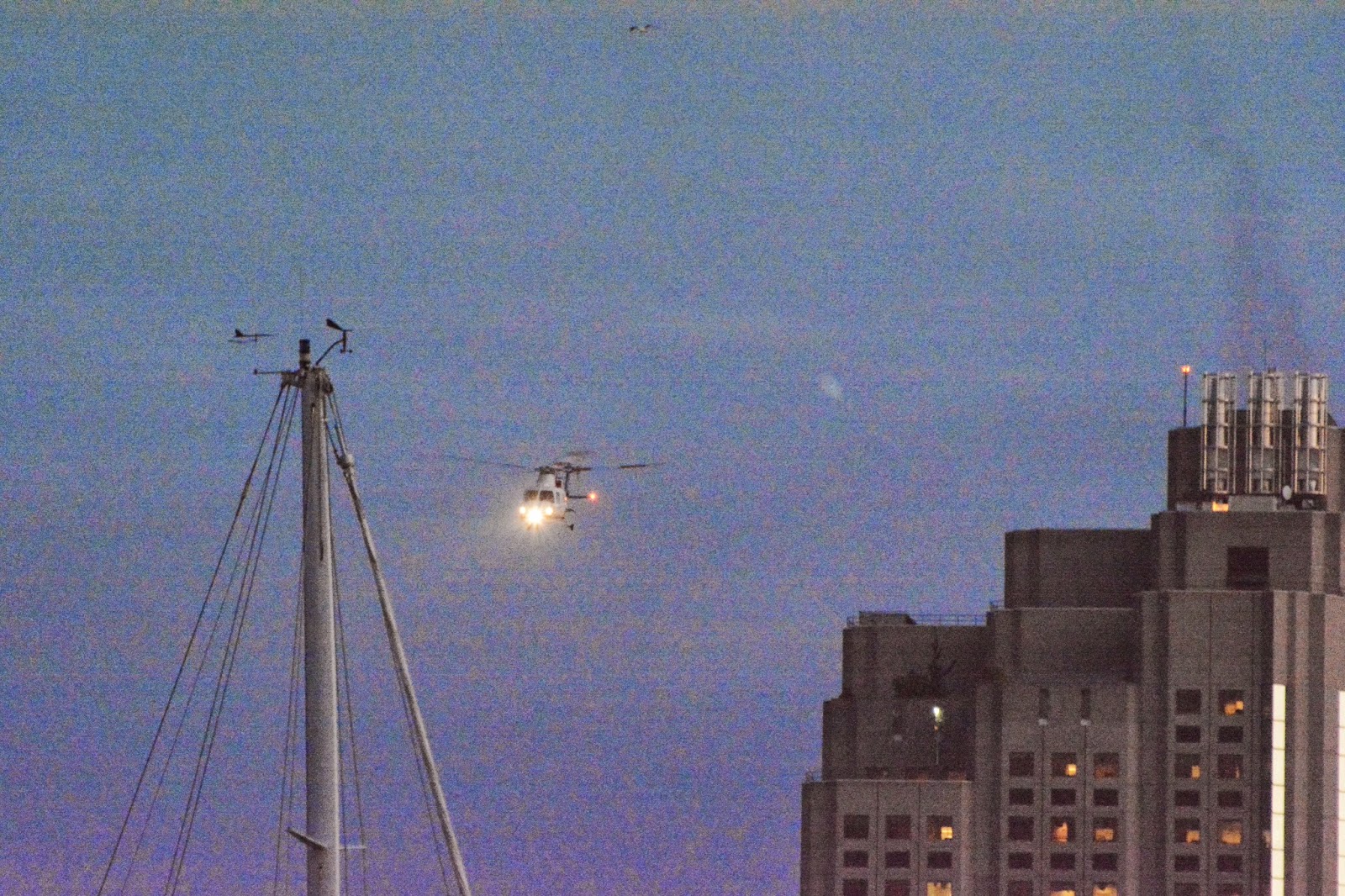 the geese seeming to be.. 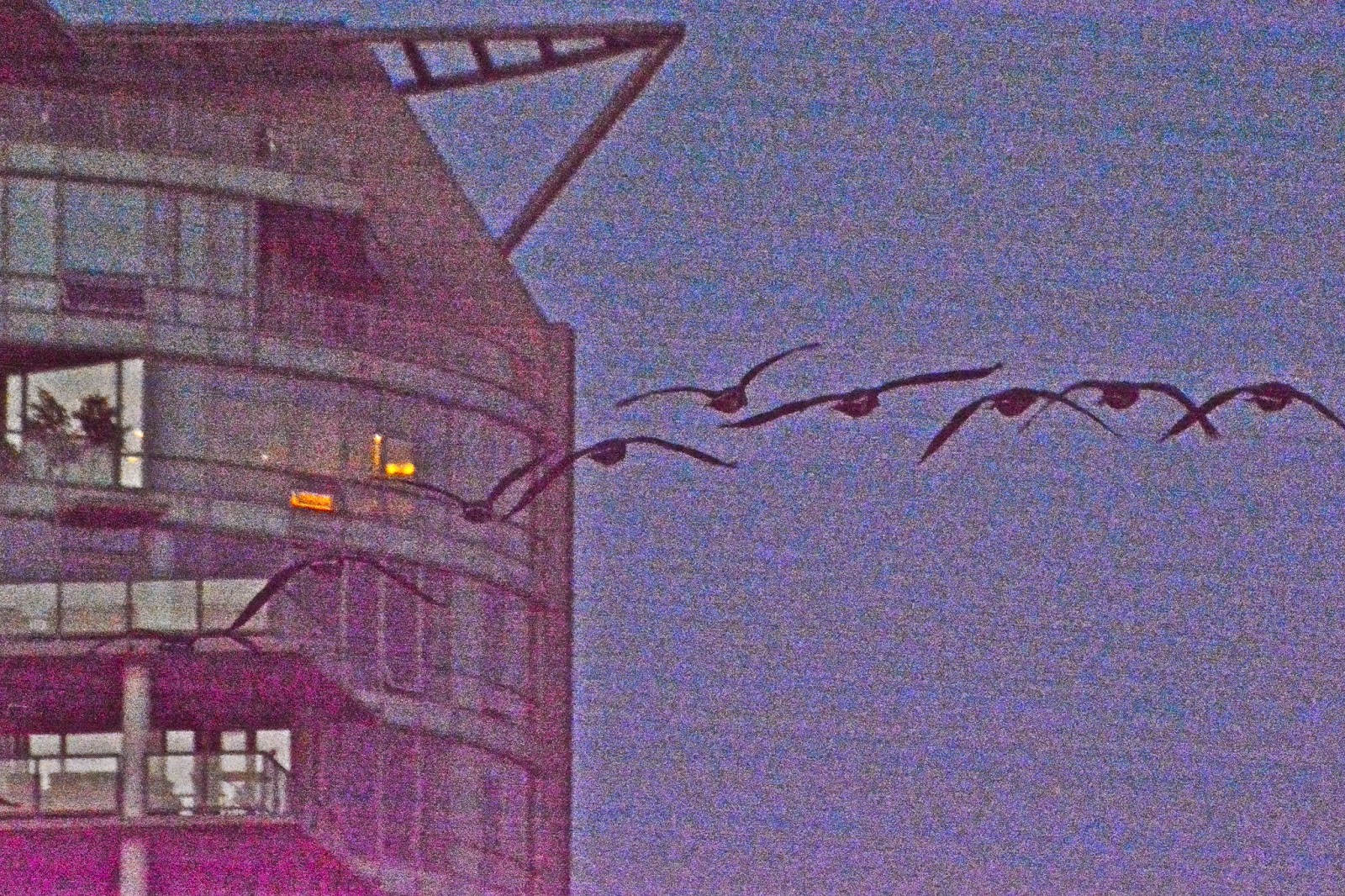 Bill and I are led by Black Jack down this ramp to the ferry we take several times a week to cross the creek.  It looks quite lovely with night lights.. 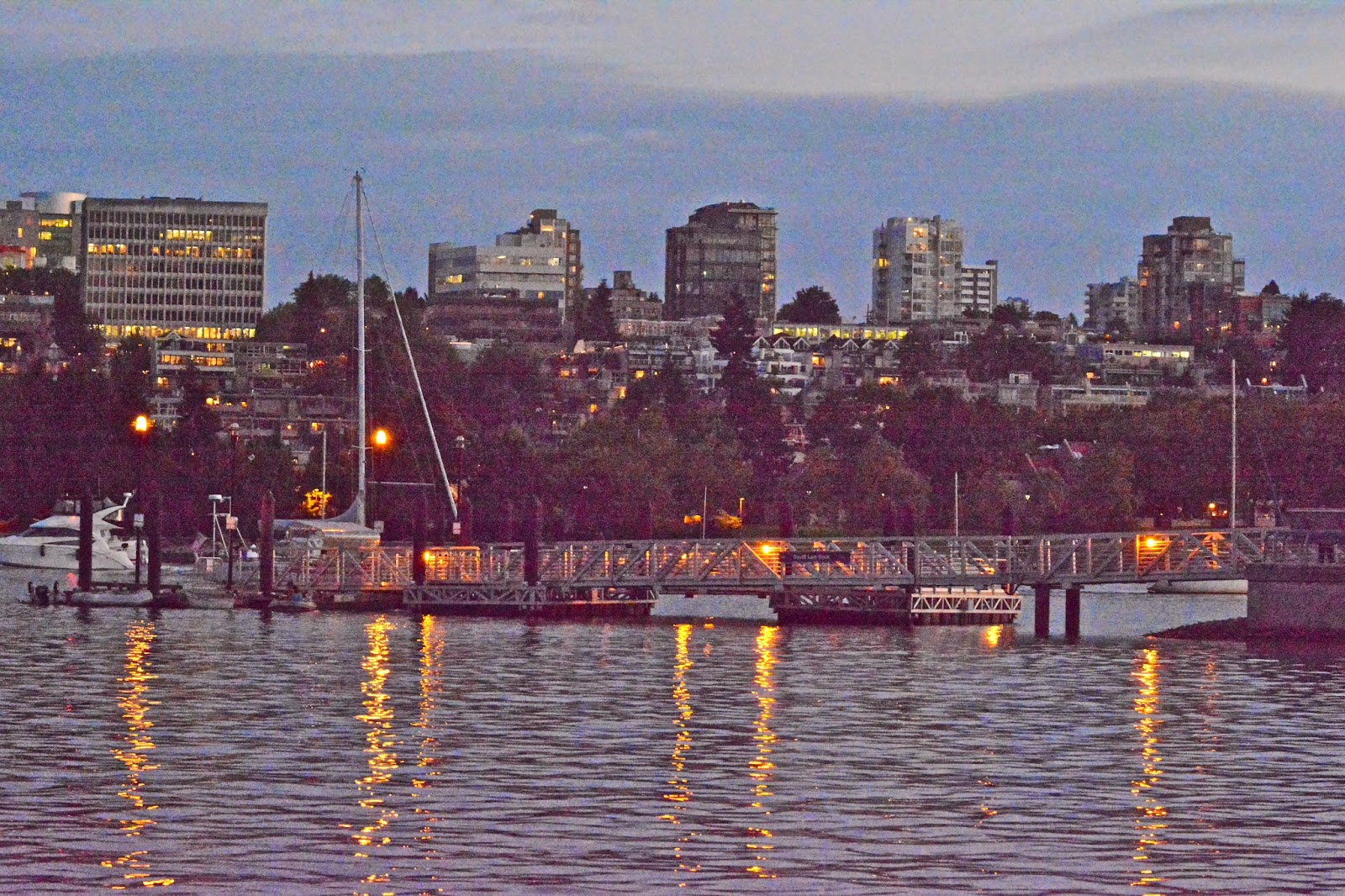 but it's not the pretty view that's gripping Black Jack.  She smells, or maybe even sees.. 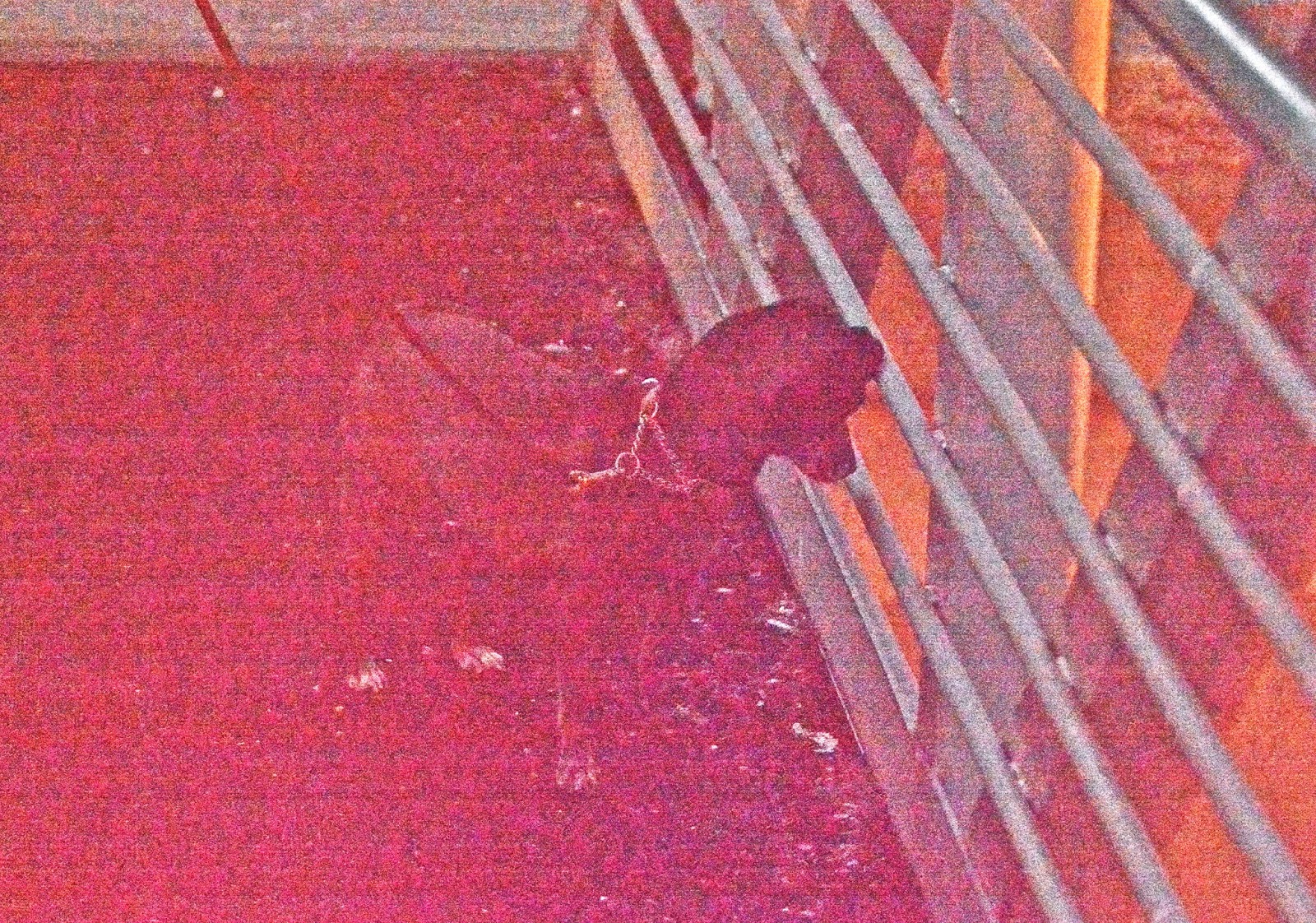 large "bugs" hopping around on the rocks below. 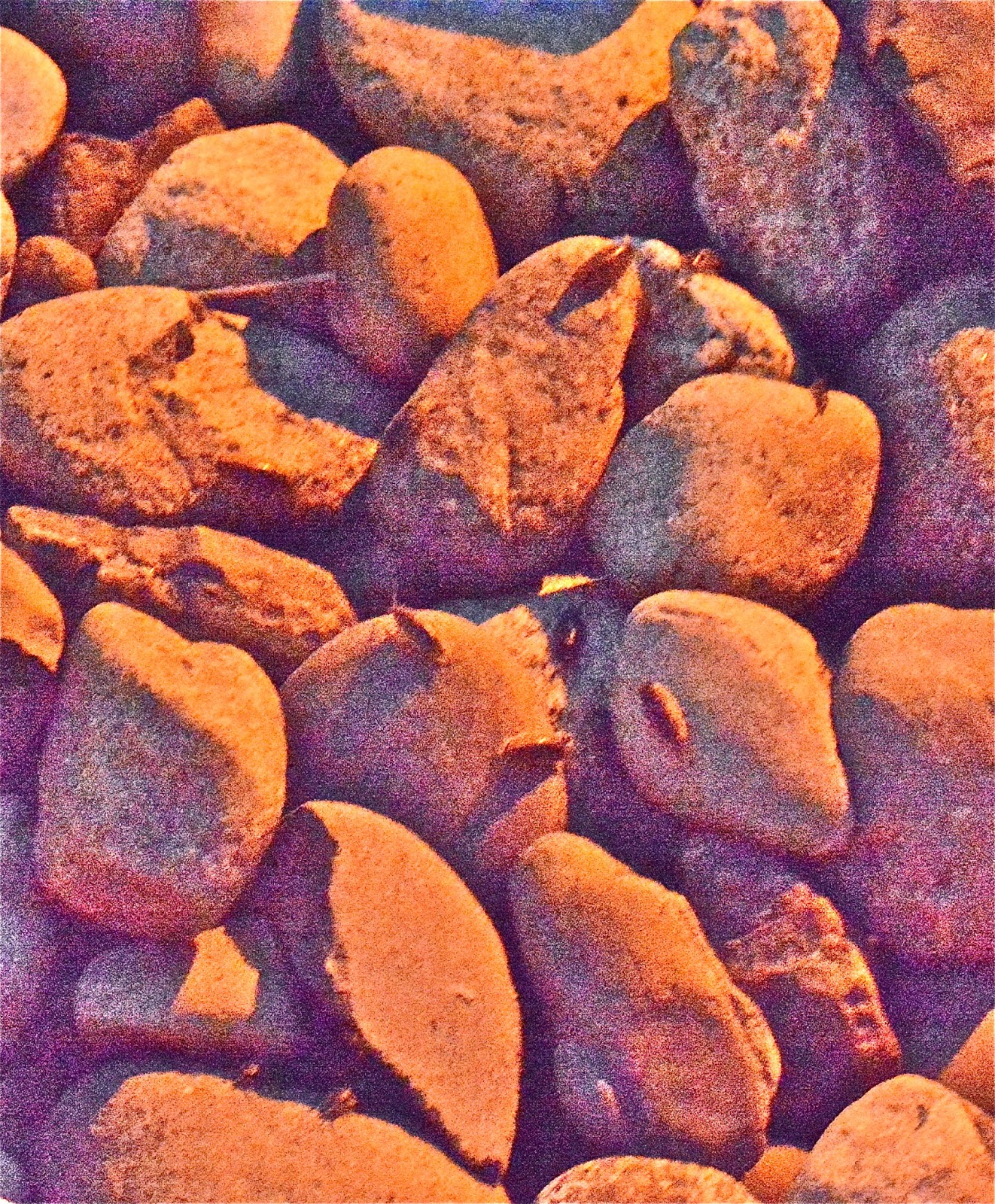 Bill lifts her up and they both peer down (I love this shot!). 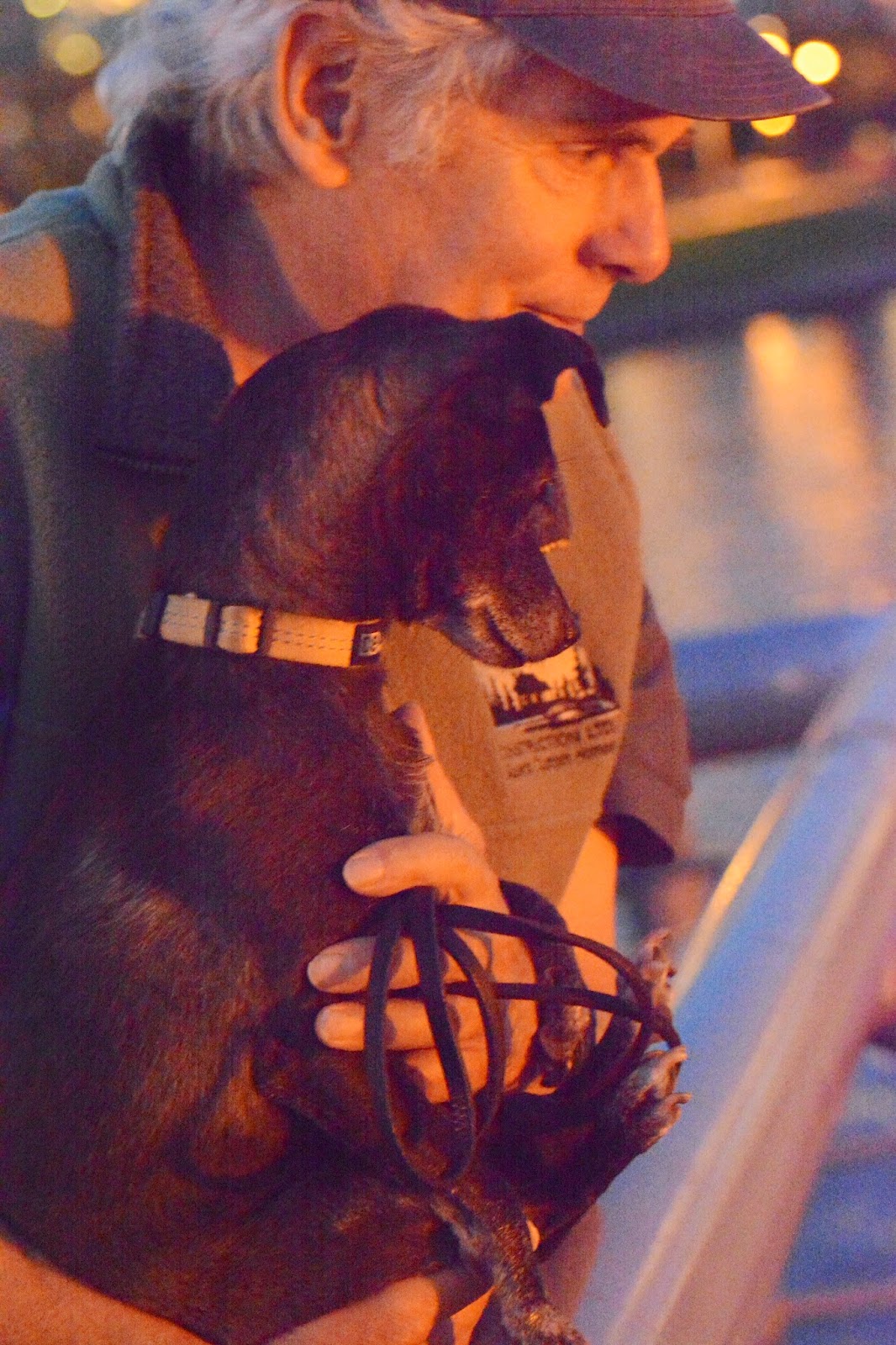 A lady approaches.  "Hello, neighbours," she says, and neither of us recognize her.  She wonders what we are looking at, and though she too sees the "bugs", is not able to help us identify them.  I think about the fact she called us neighbours.  Living in the downtown area of a fairly large city (Vancouver), one might think the concept of neighbour would be far-fetched, but Yaletown has that feel about it.  We had met Jimmy and Simon (so sorry I didn't have the camera) earlier that day.  We only see them when they walk..  well, carry :) their dogs  through the park, but we look on them as friends.  Here's a photo I took of them in March 2013, Simon on the left holding MacKenzie and Jimmy holding Mimosa.  Jimmy he has tried several times to help me identify the dogs correctly.  Hopefully, I did so this time. 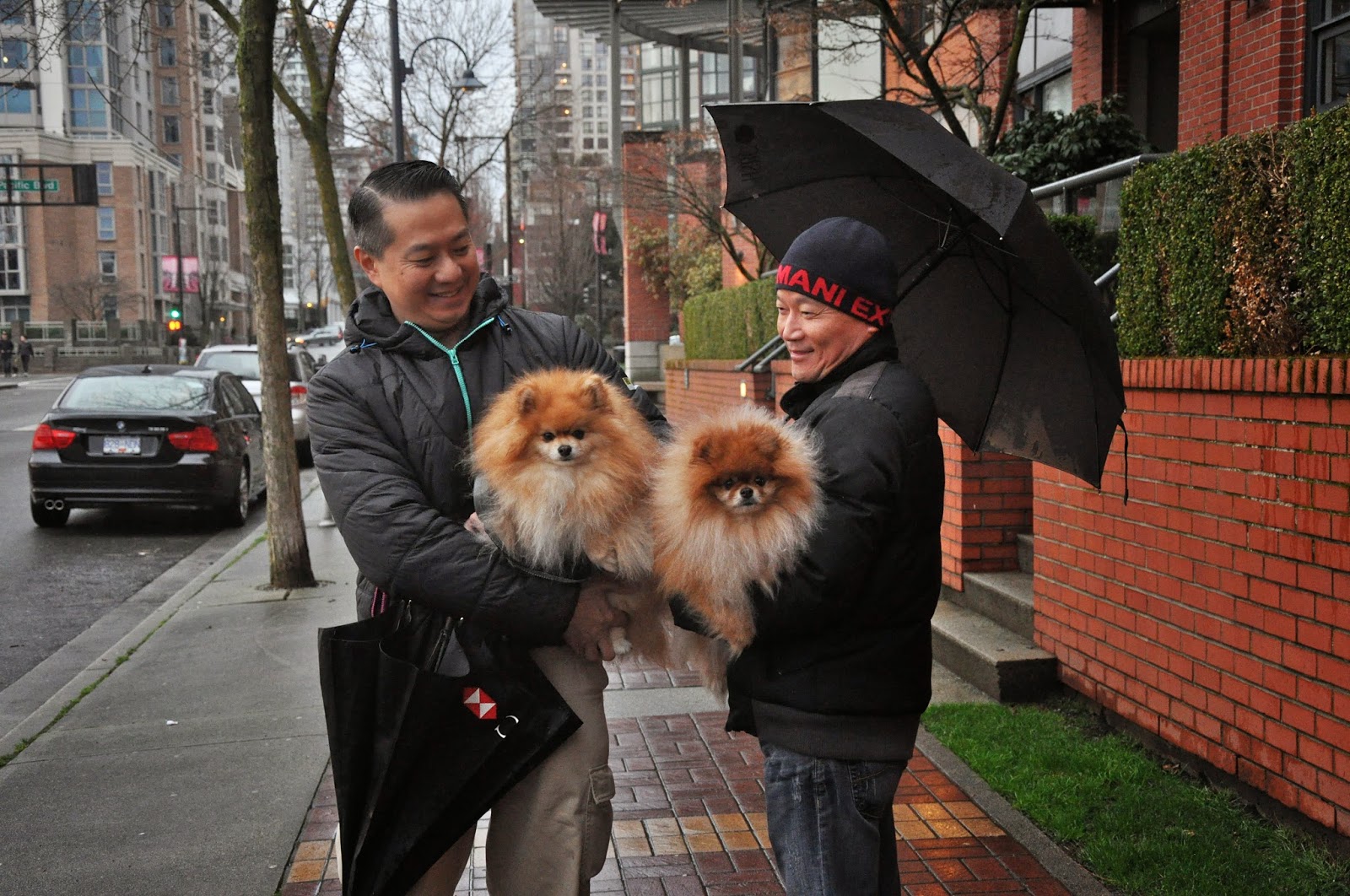 Bill's sister visited one day, saw Jimmy and Simon walking and immediately recognized them from the blog.  She spoke to them and they smiled as they recounted that story yesterday.  Blogging worlds and downtown worlds coming together in neighbourly fashion is a good thing, don't you think?  But getting back to the identification problem.  Any ideas? 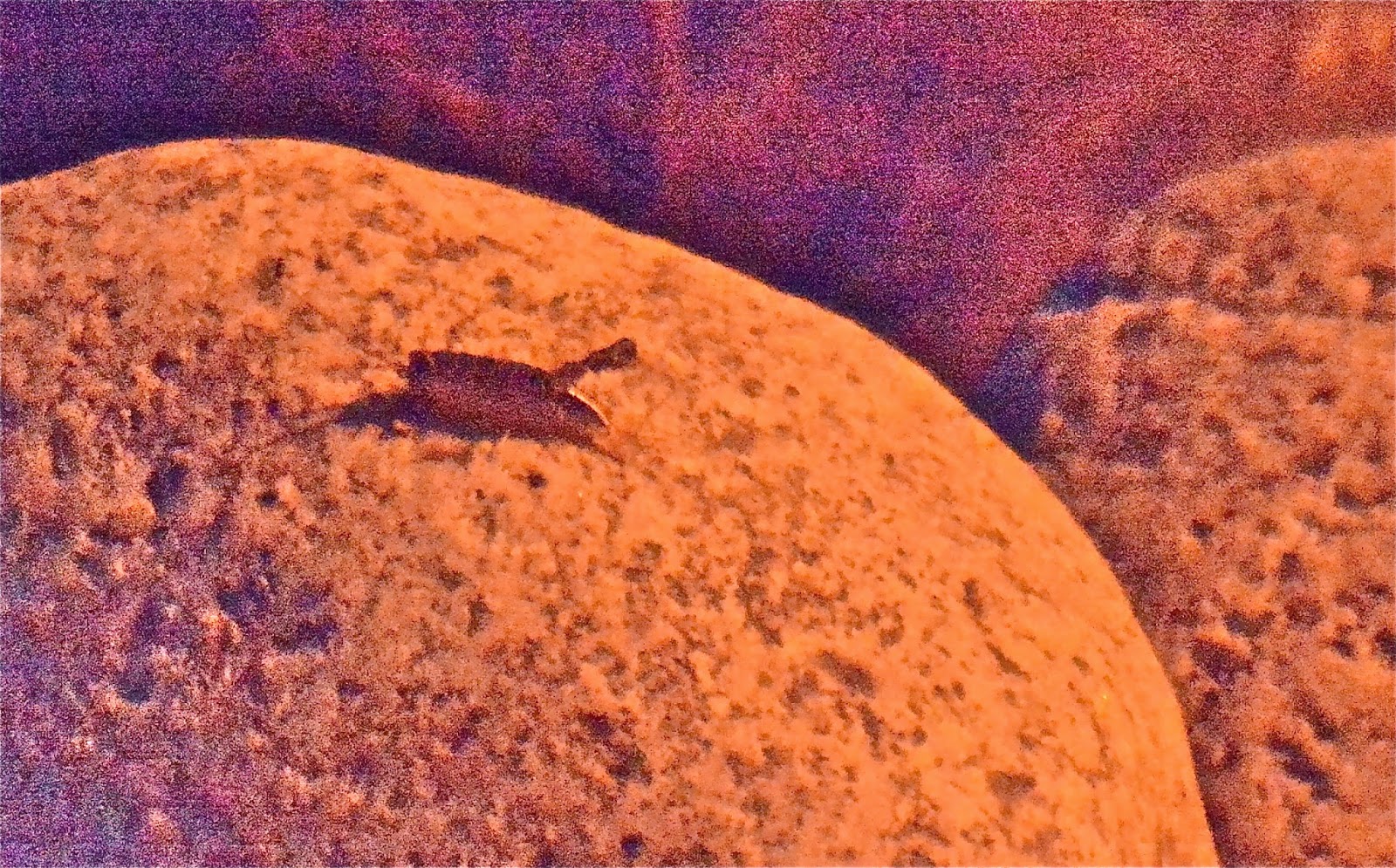 At the top of that ferry ramp is some new art. 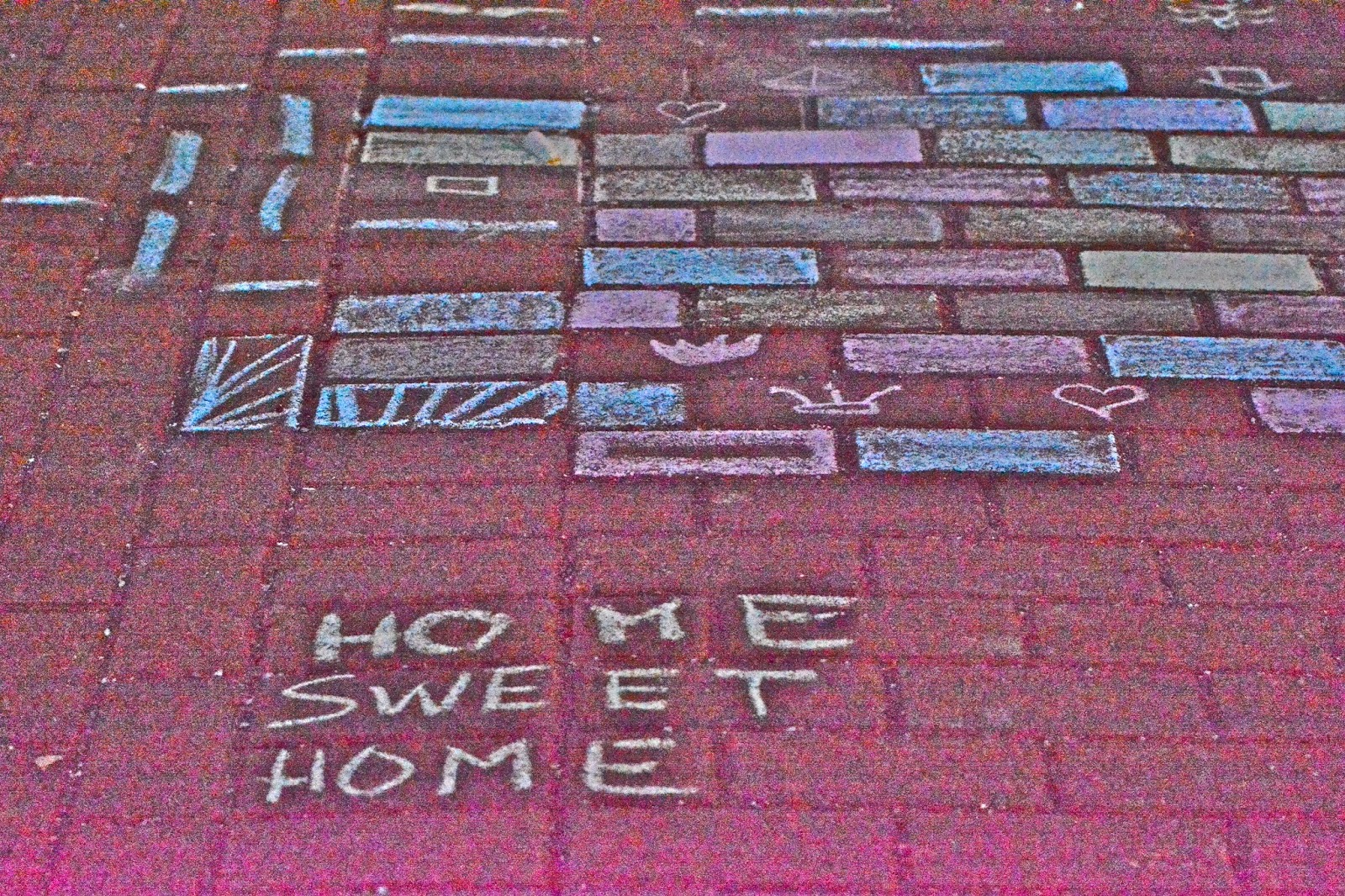 I don't know yet what it will mean.  It appears unfinished.  I'll keep you posted :) 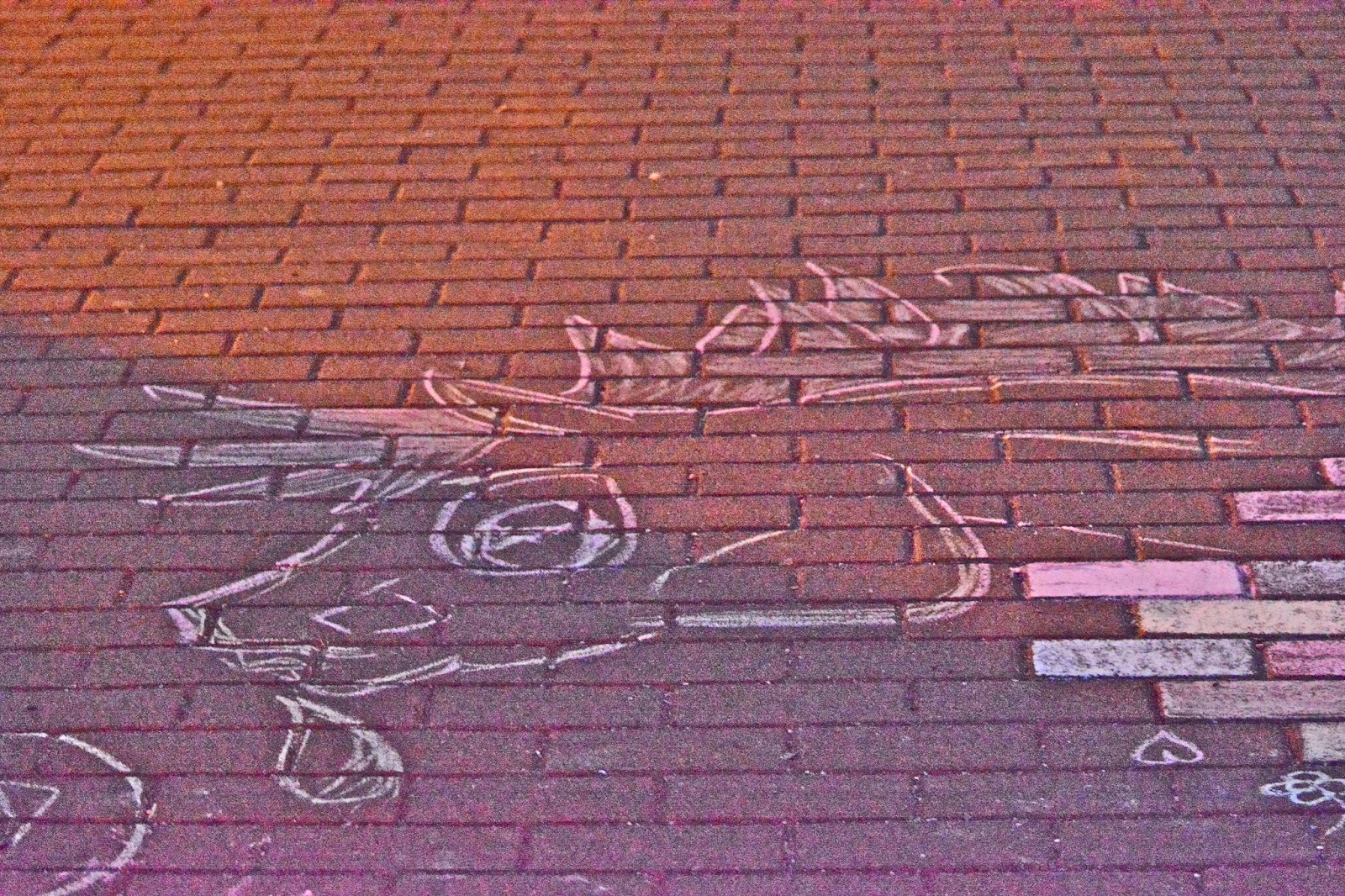 Also at the top of that ramp were two locked bikes.  Perhaps someone leaves them there for quick get-aways on the ferry.  I had fun taking.. 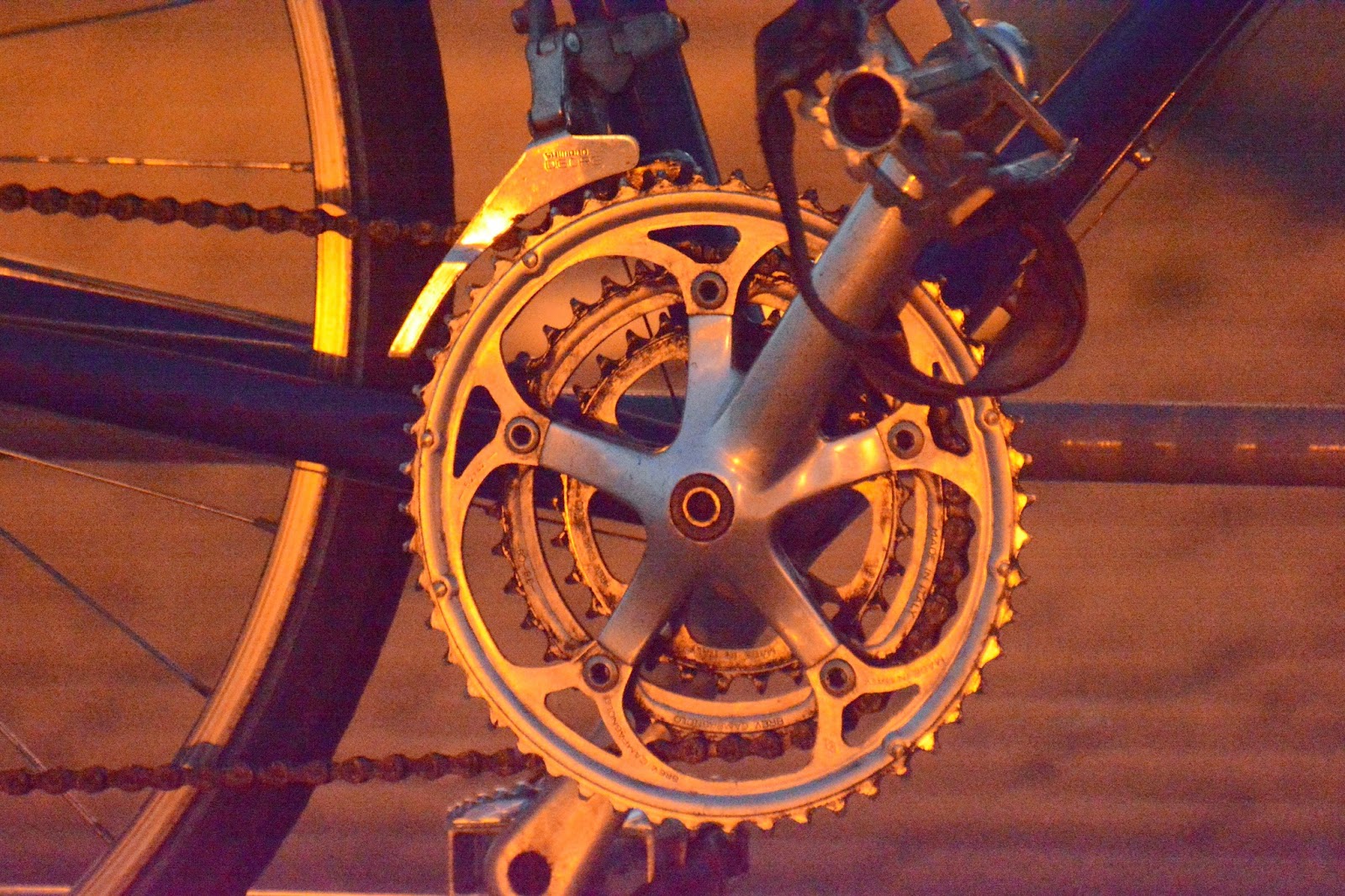 these two photos.  At least, the "bike" portion of the blog title has been addressed :) 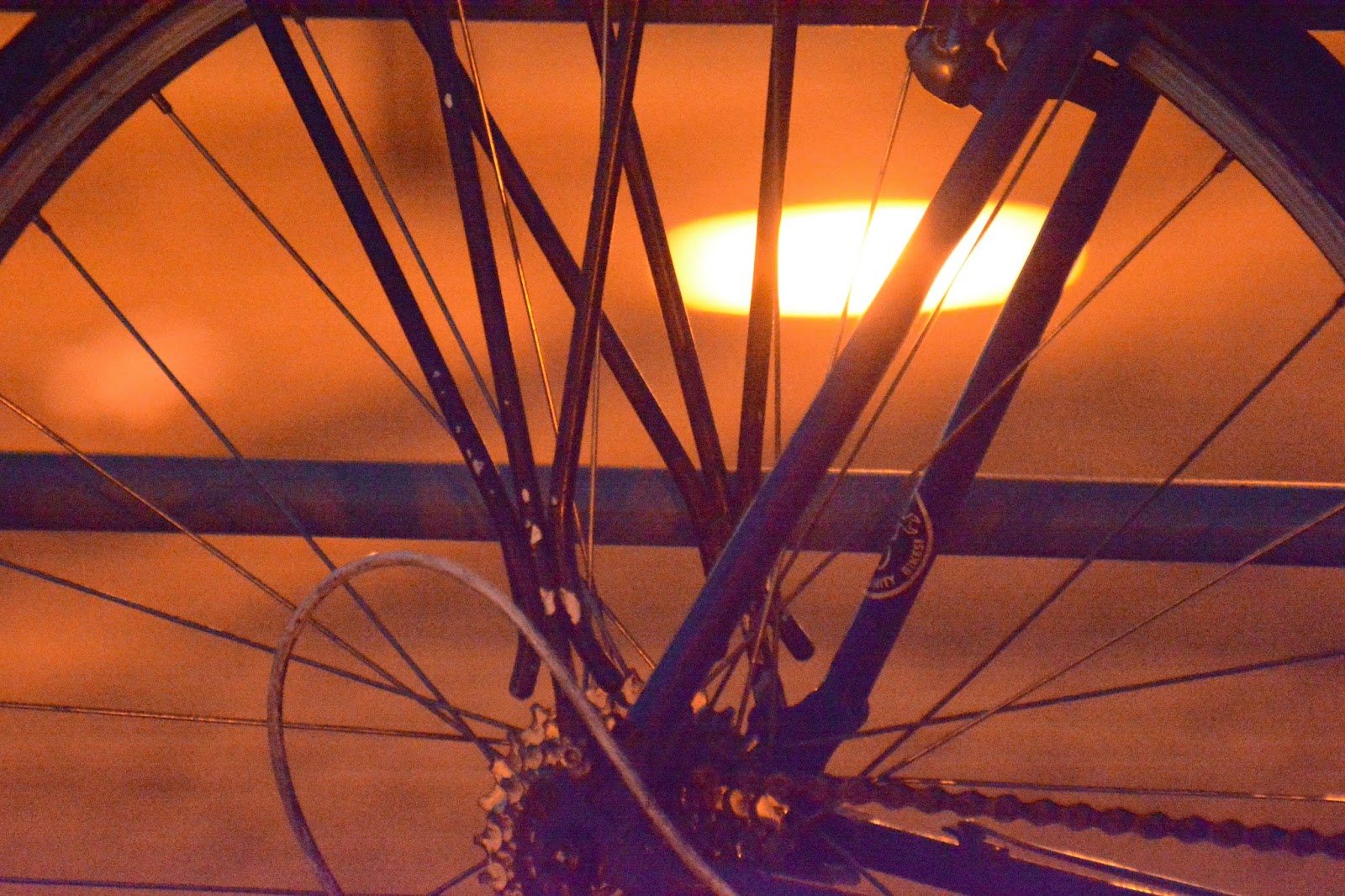 And finally, this morning, a couple of shots from the 8th floor apartment window.  The camera didn't do so badly on those.  I keep hoping the problem will be easily fixed.  The art by.. 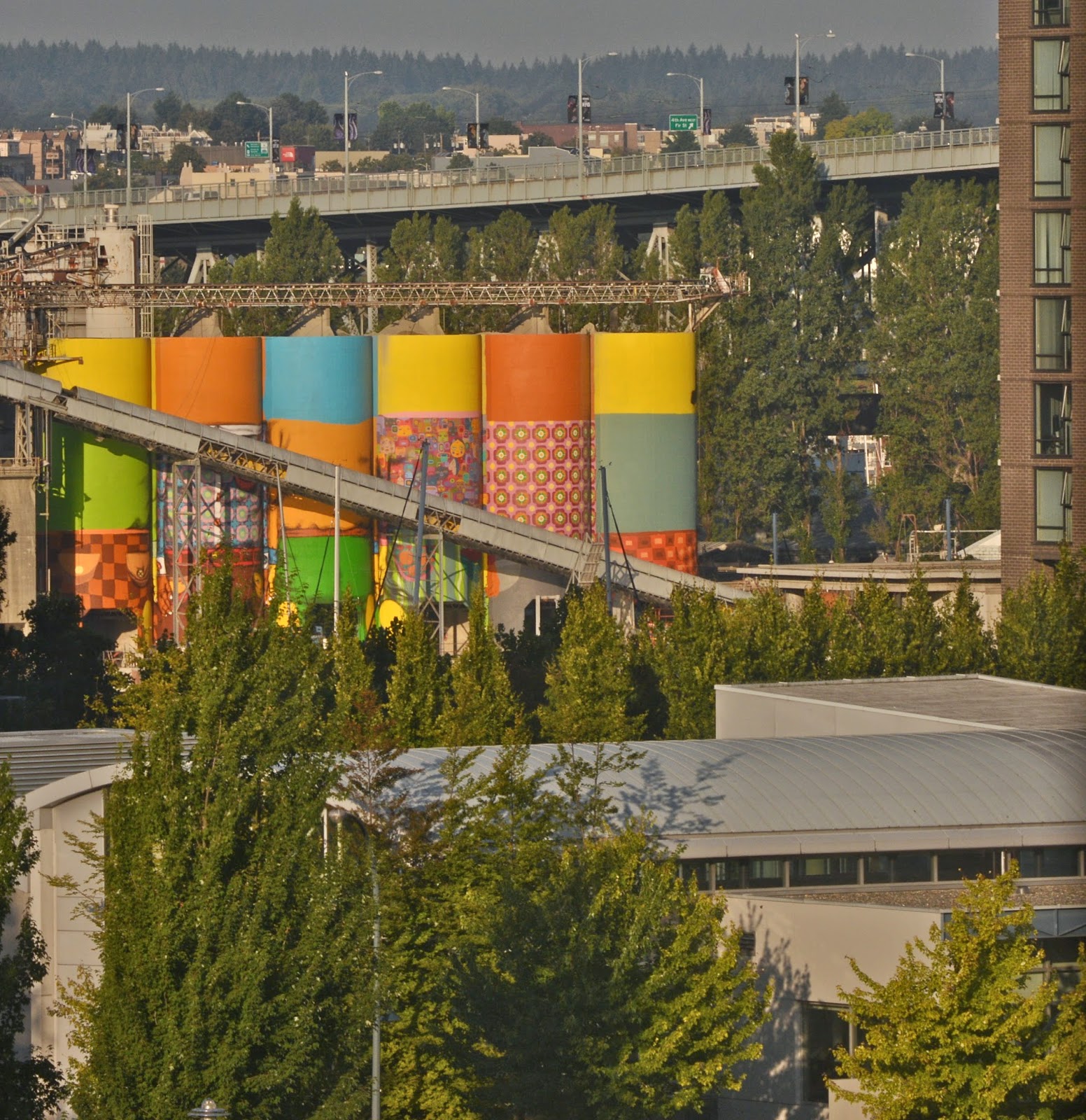 Os Gemeos is coming along.  I think a lot about what it is that constitutes great art.  The Brazilian artists can be heard in conversation at this video link.  The project is estimated to cost over $126,000 dollars.  With our trips to Harrison Galleries and in conversation with Chris and Jennifer, the owners of the gallery, my views of the worth of art are growing and changing, but I must admit, that still sounds like an enormous amount of money, some of which could keep a starving child alive.  I bet artists have heard that line before and I concede that my life, without art around me, would be robbed of a pleasure that I would be loathe to give up.  More about these artists in tomorrow's "G" post for ABC Wednesday.  In the mean time, hop on over, if you have the time, to share in stories from around the world at Our World Tuesday.  Have a good one, everybody.  Thank you for stopping by, and to Bill, especially, thank you for putting up with me and my camera's temporary indispositions! 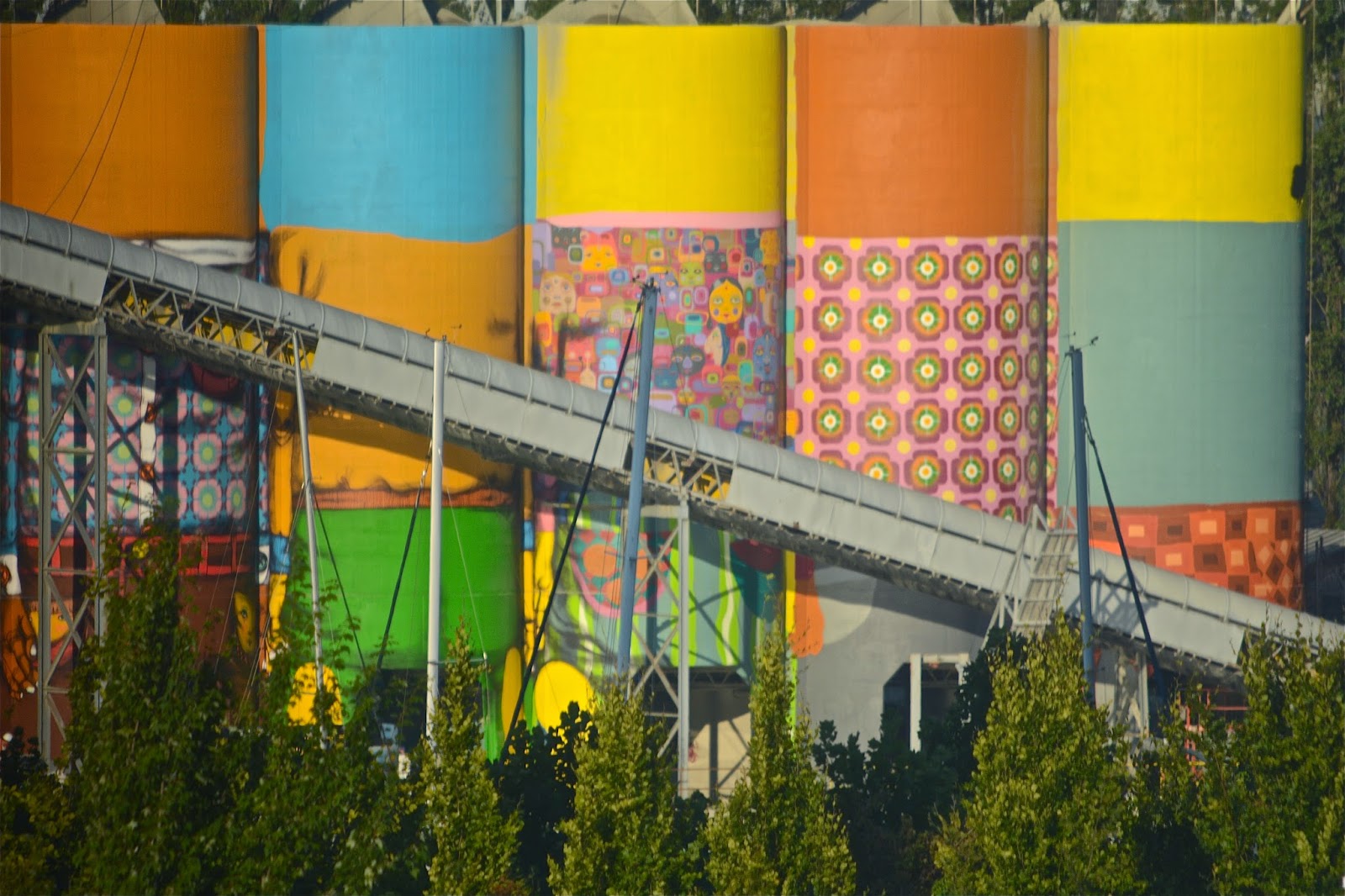