It was a day full of art yesterday.  I'd like to share it with Our World Tuesday, with many thanks to the volunteers who keep the meme going so successfully.

We stopped by Art Works Gallery after we left Harrison Galleries café yesterday.  Such a friendly person at the desk, happy to answer questions and fine with photography.  There was a great deal of art to see.  We barely touched the surface and I wasn't able to find out all of the titles and artists but here are a few of the photographs I took.
"Sunrise with Madronas" by Vern Simpson (Oil on Canvas) 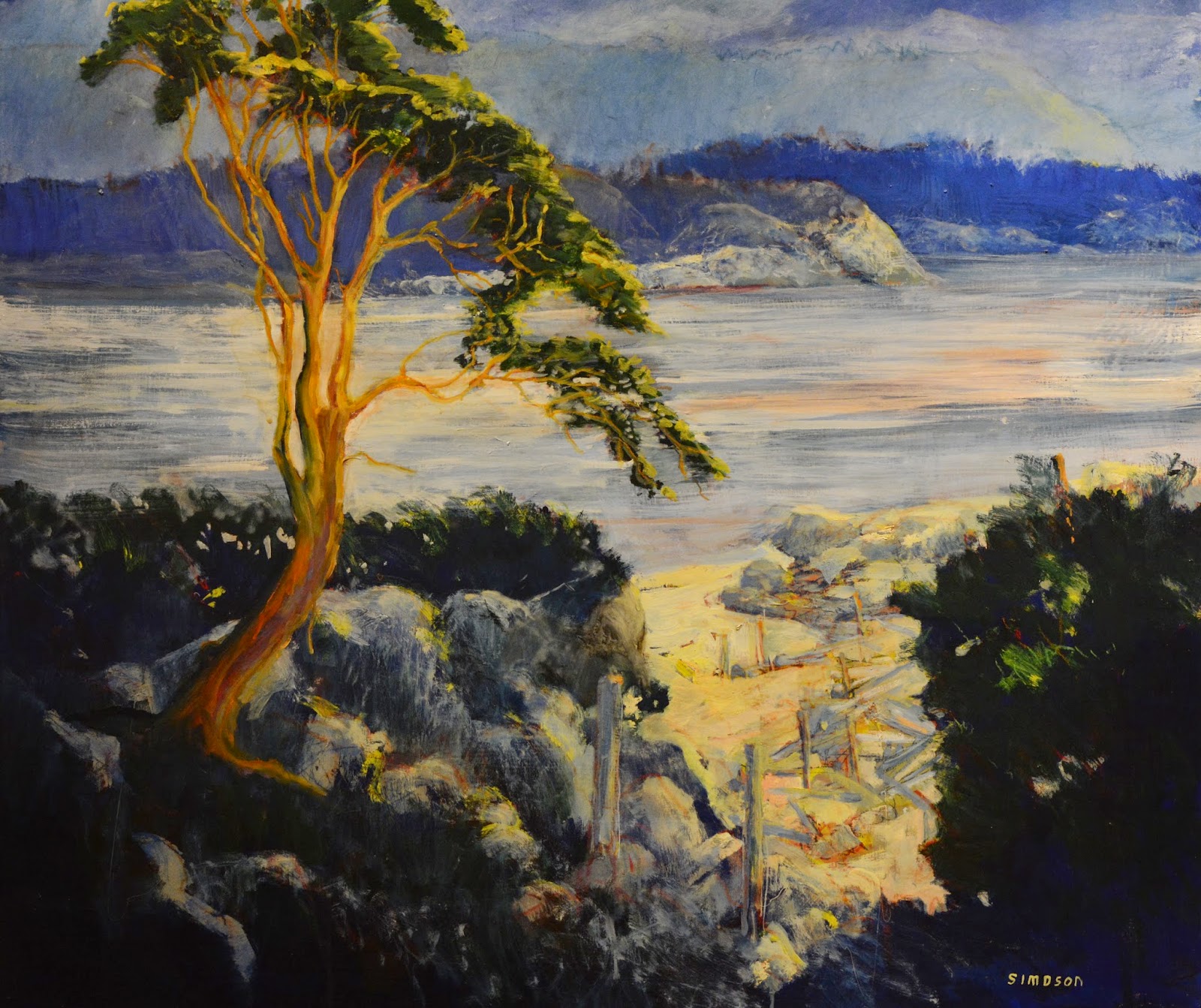 This is by Marie-Danielle Leblanc, though I wasn't able to find a title to the work.  It is mixed media on panel, and was part of an exhibition called "Cool" that will end on Oct.2nd. 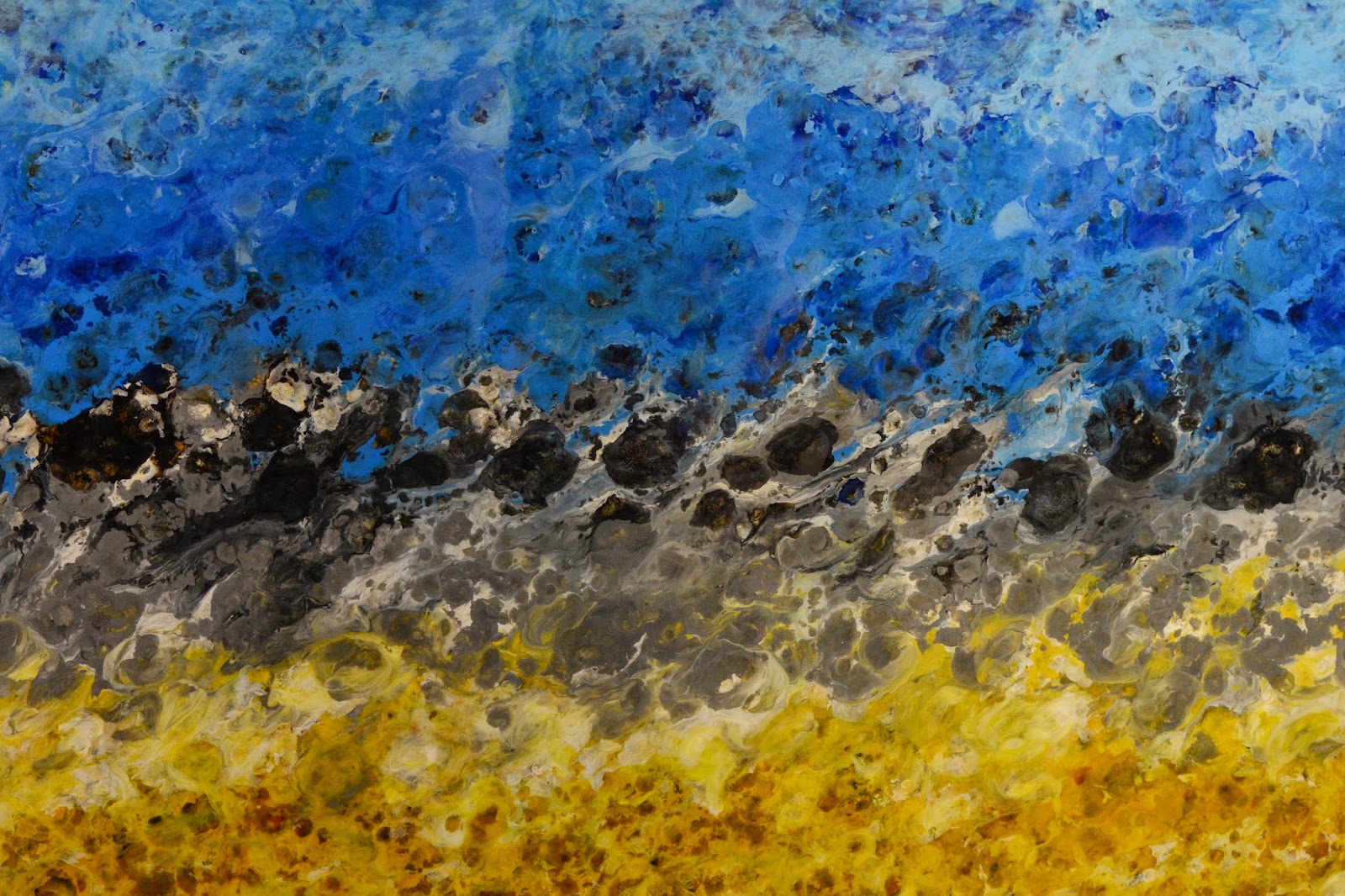 This is by Sharon Quirke.  She was born in Vancouver, lived in Prince Rupert, studied and worked in Montreal and New York, and has been settled in West Vancouver since 1984. 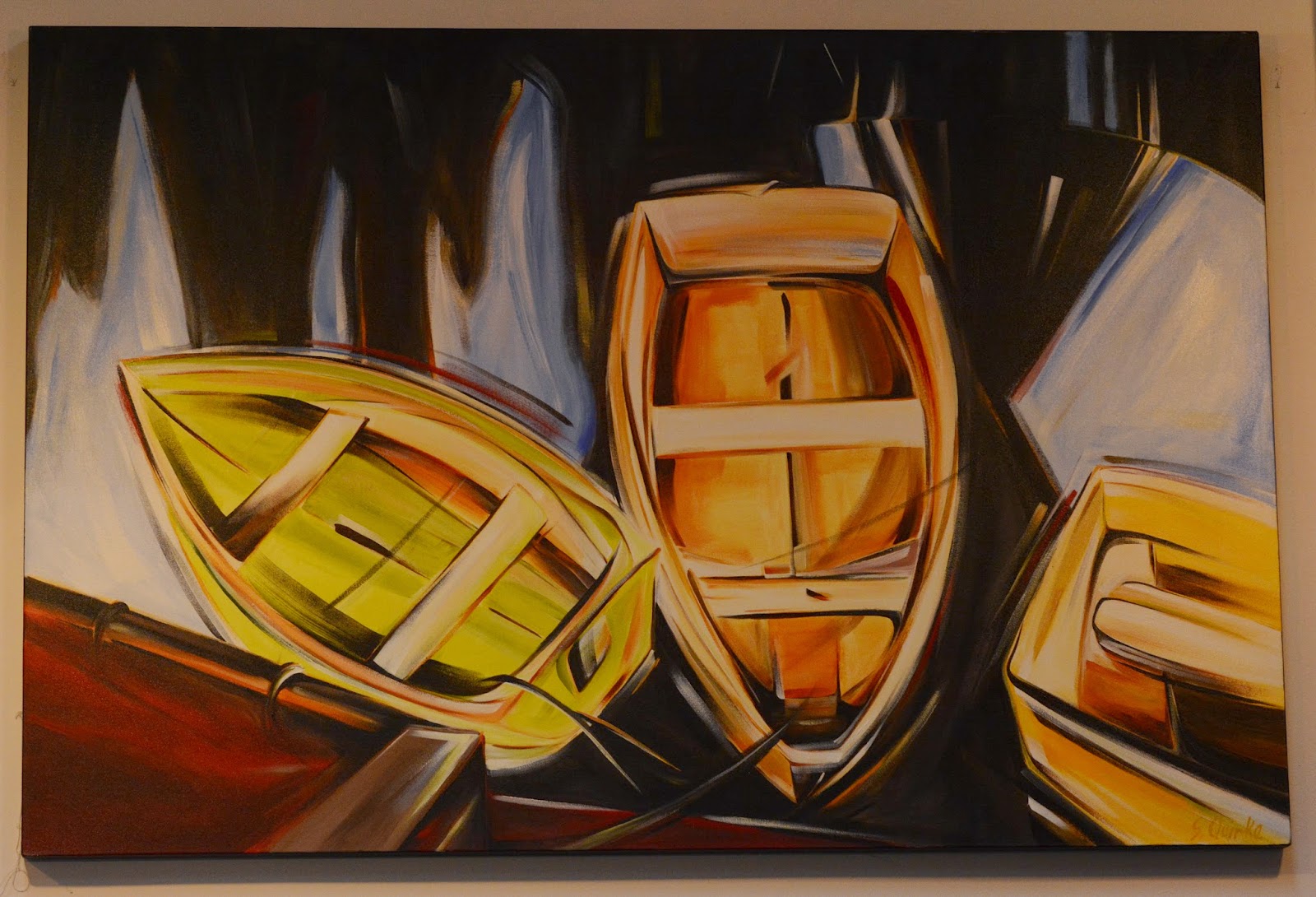 Bill was showing admirable patience here.  While I roamed excitedly about the gallery with my camera, he must have been wondering if we would make it home in time to eat supper before going out to a symphony concert later in the evening.  (We did.)  Black Jack, as you can see, was engrossed in the art :) 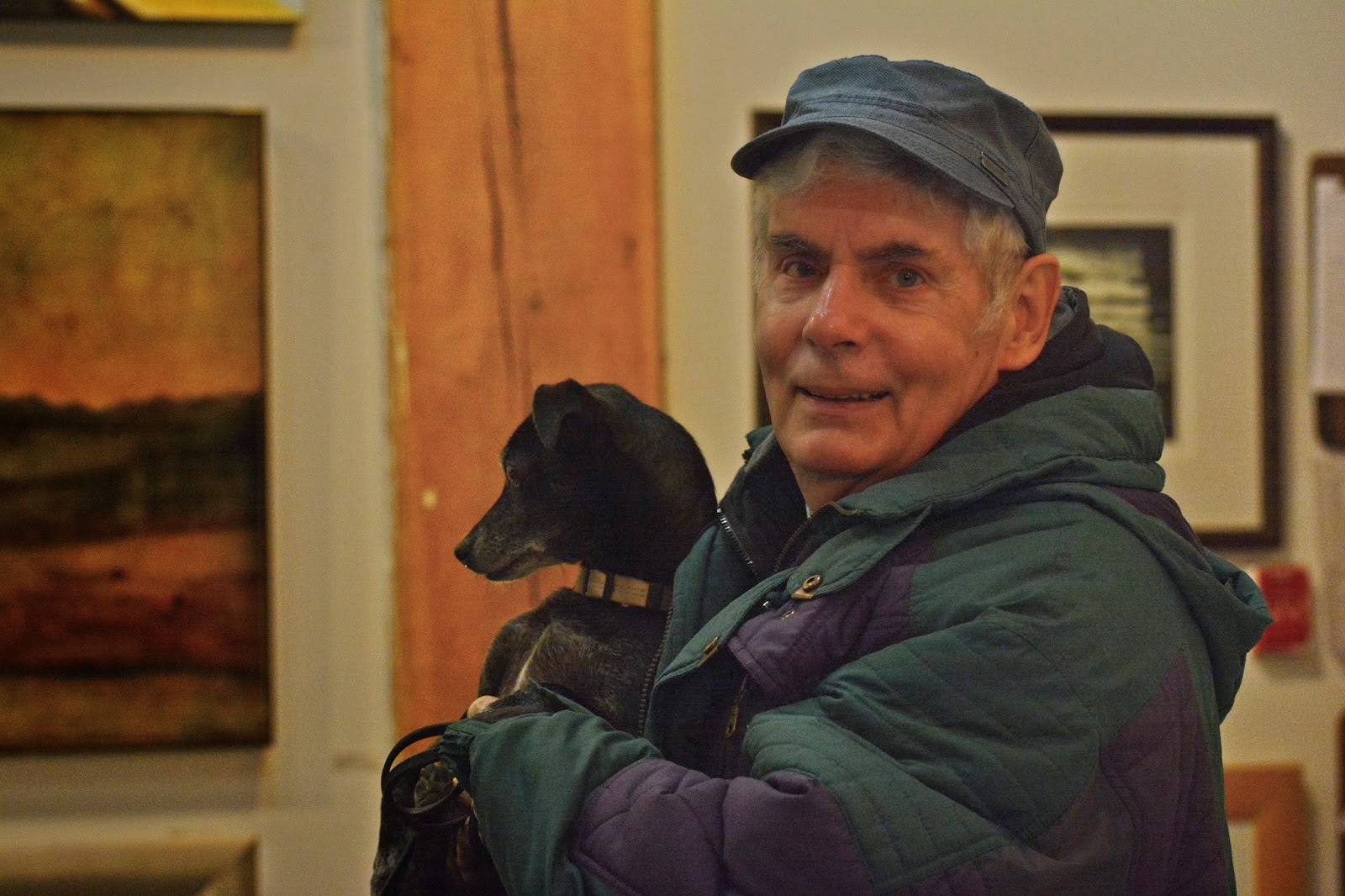 Bill liked this one and it appealed to me as well.  It was in a spot far above our heads and I wasn't able to find the artist's name. 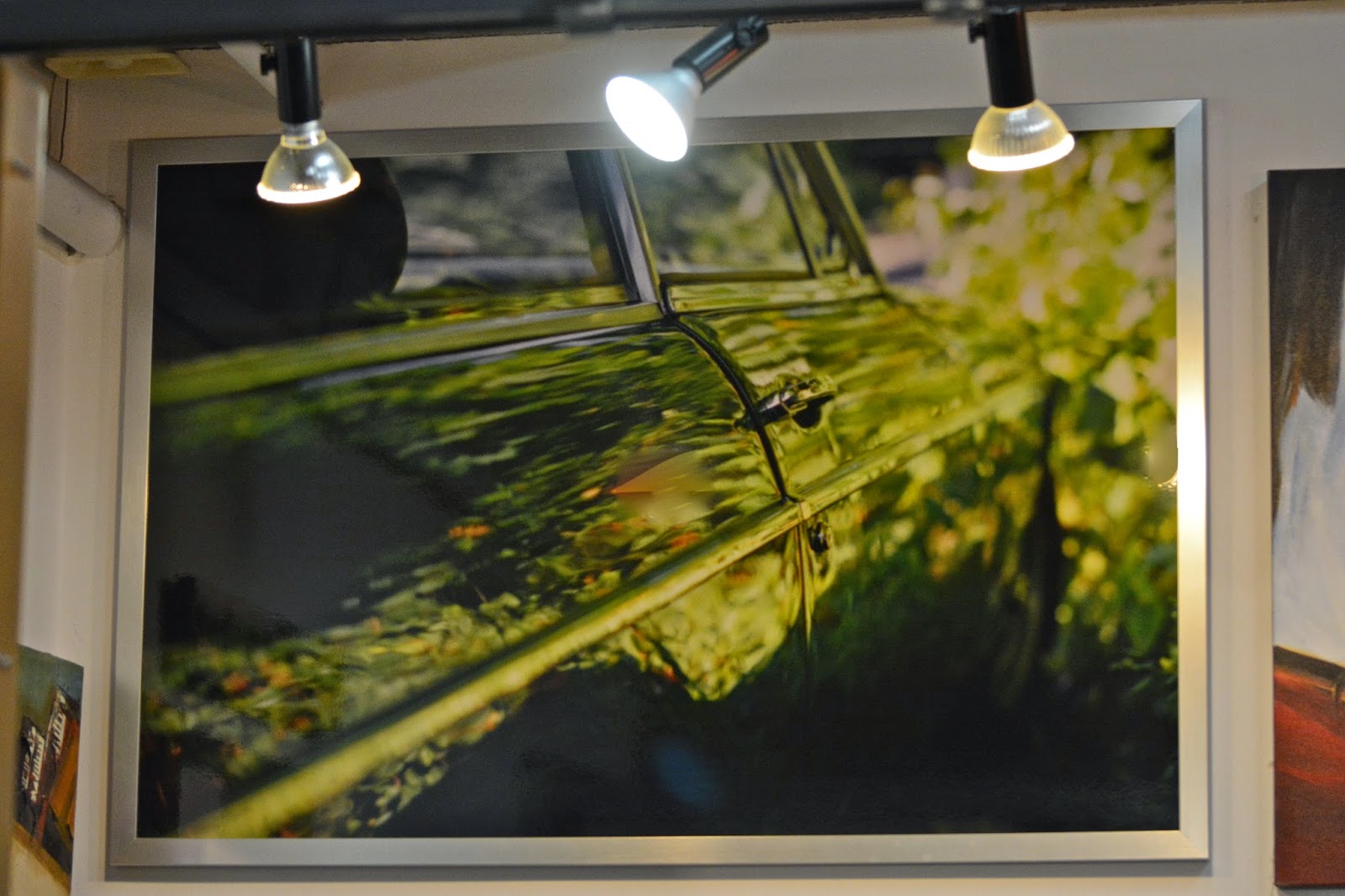 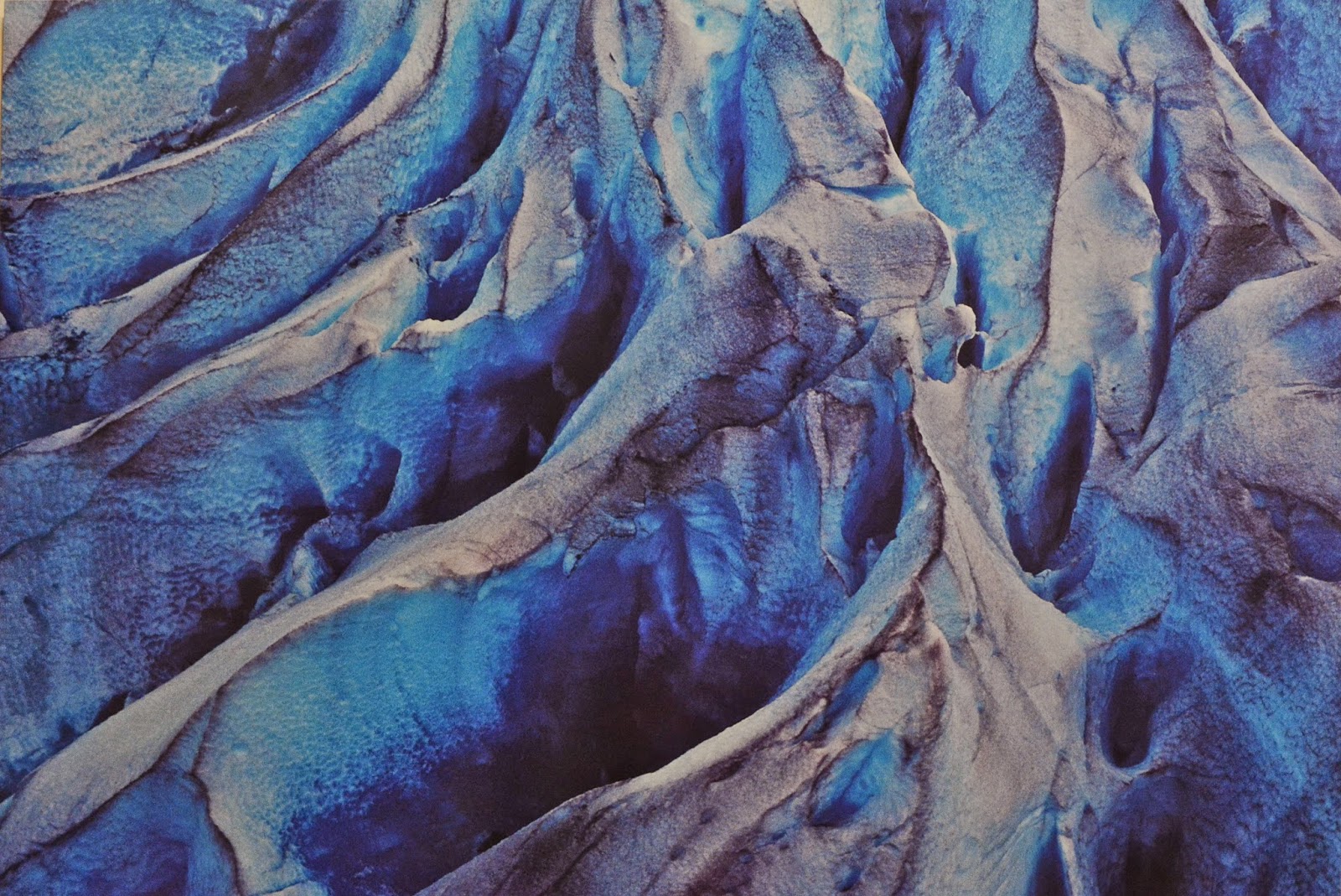 There are some wonderful stained glass pieces in the gallery that I love, 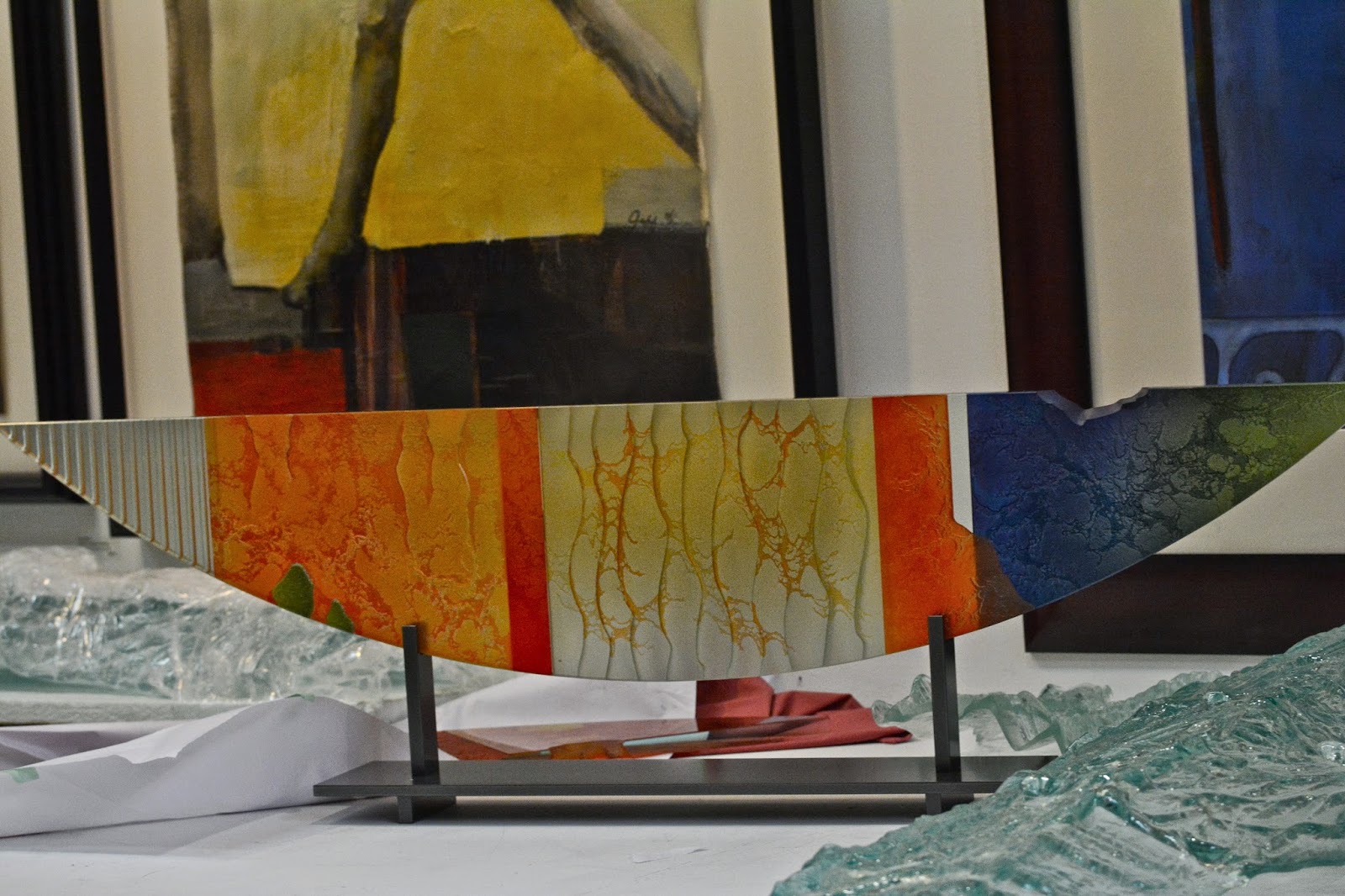 I couldn't find the artist's name for this one.  It seems to be something like TREY.  Perhaps, someone here will recognize it. 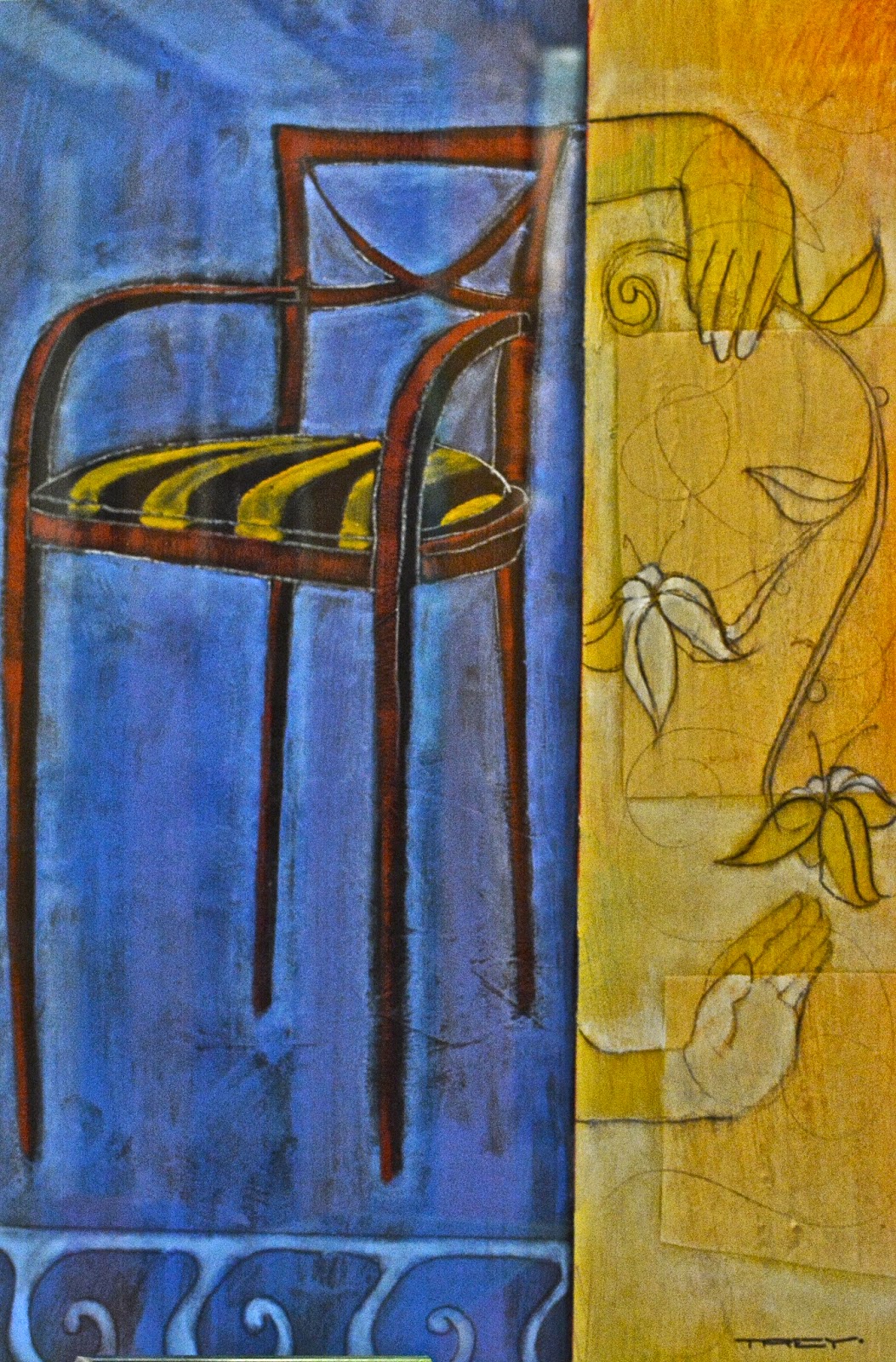 This one, at $500, was the only one Bill thought we might be able to afford :)  It is called "Walking with You" and is a mixed media and resin work by Linzy Arnott.  My photograph doesn't do it justice.  Linzy tells an intriguing story at her website of wanting to fly as a child and jumping off a barn.  She doesn't say whether she managed to complete that jump without injury. Her story triggered some thought about artists, because a former art teacher at the school where I taught told me almost exactly the same tale.  His brother convinced him that he should jump from their housetop, and gave him a bed sheet that he thought would act as a parachute to slow his descent.  He broke both legs but healed well and as gone on to a very successful career as an art teacher.

I'm happy to tell you that the concert at The Orpheum was one that still leaves me feeling like the luckiest person in the world this morning.  Here are a few small sections.. 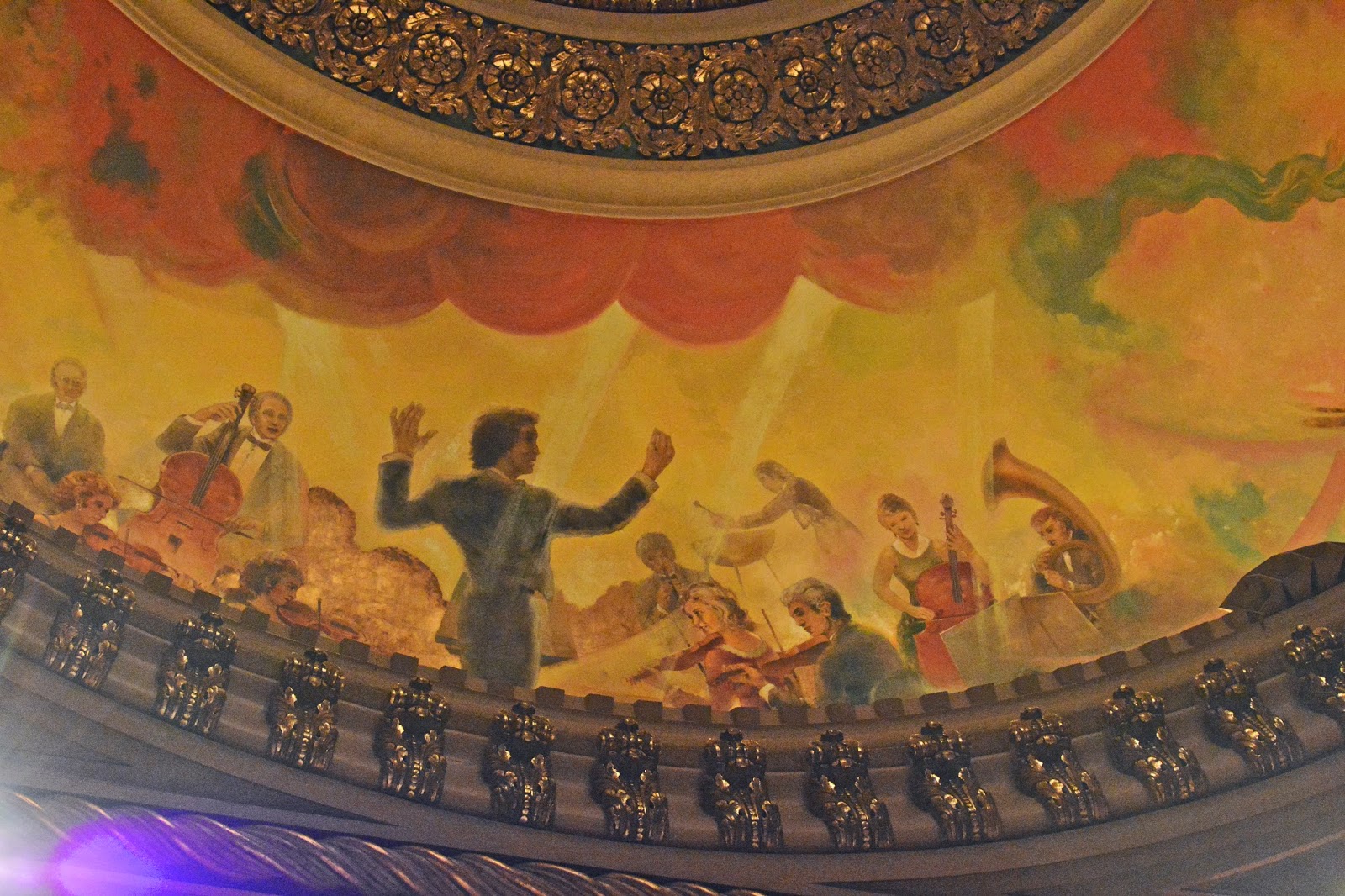 of the mural surrounding the central chandelier. 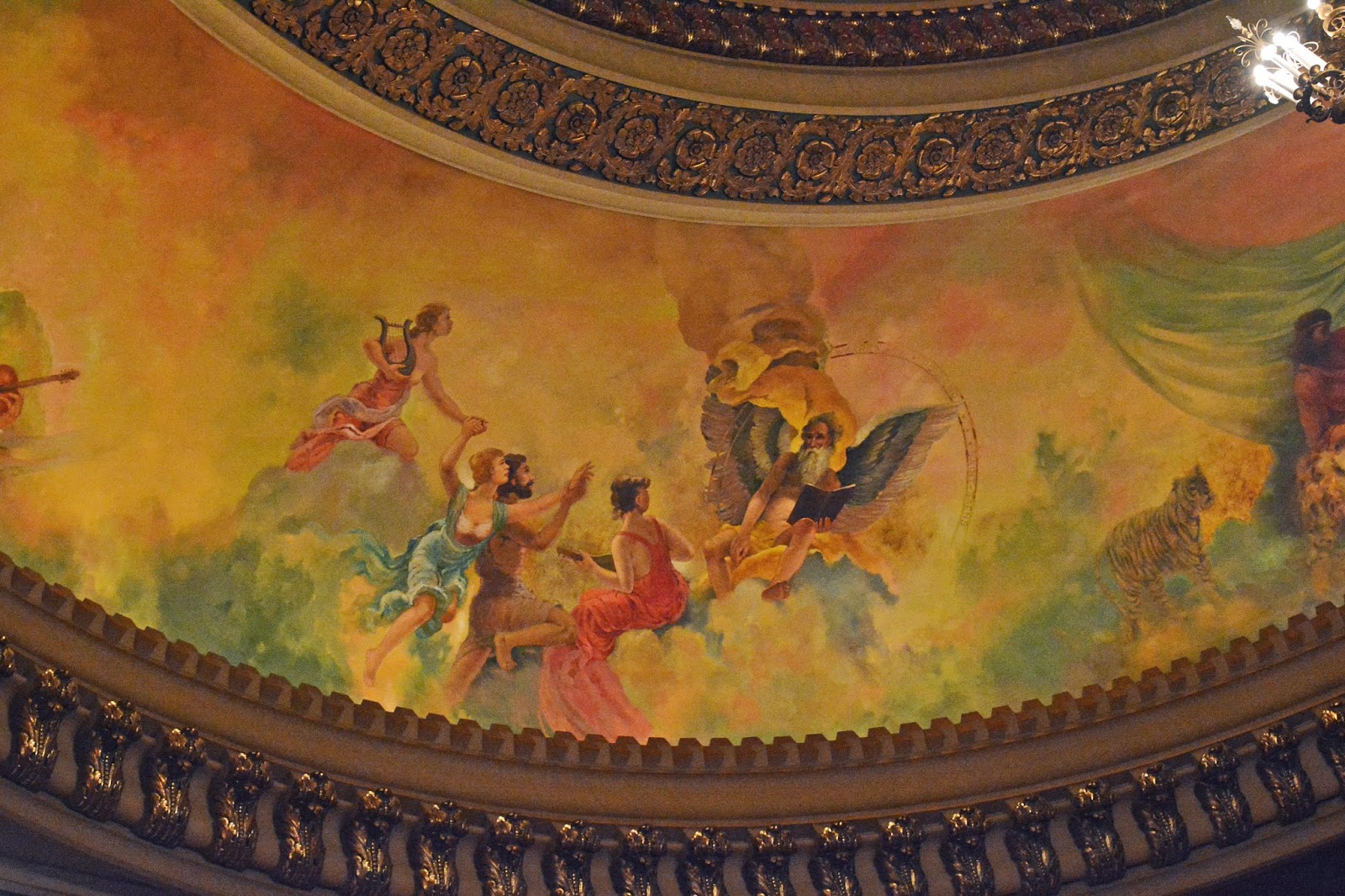 It was painted by Tony Heinsbergen and it always draws my eye, 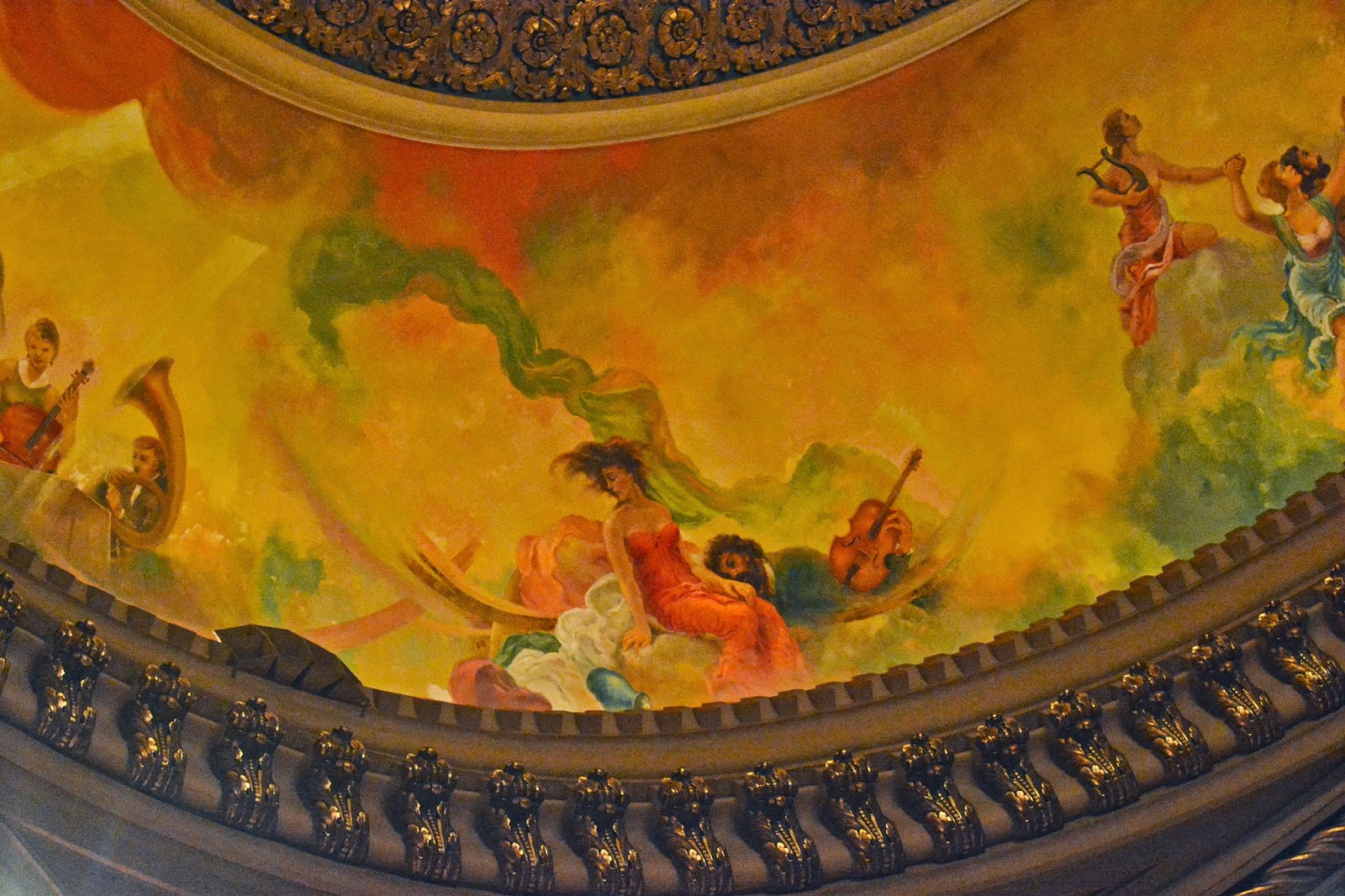 as does the ornate decor. 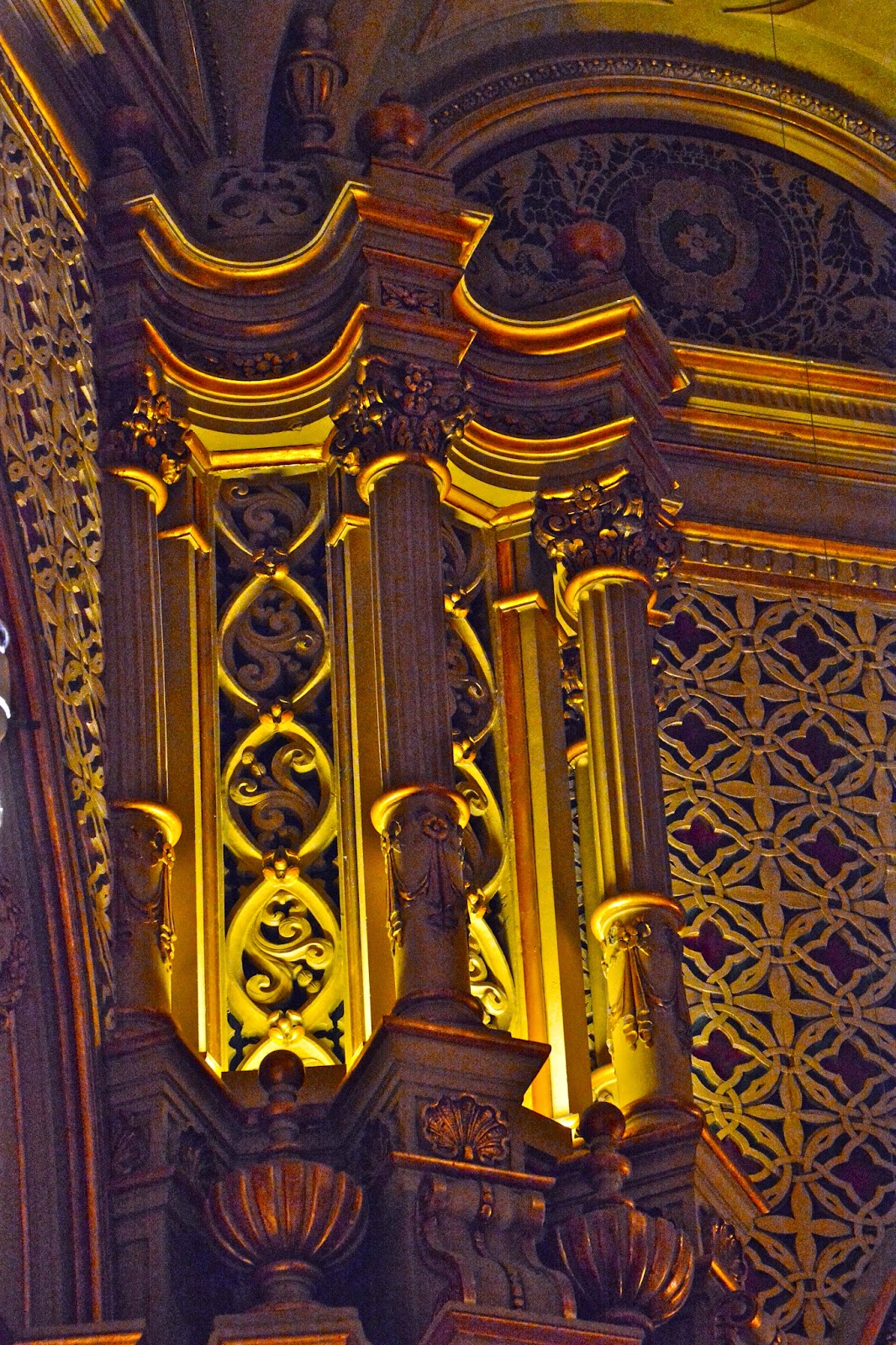 But the music, you ask?  Well, I have only one tiny glimpse of a bass player at intermission to show, but the musicians were, I thought, at the very top of their form. 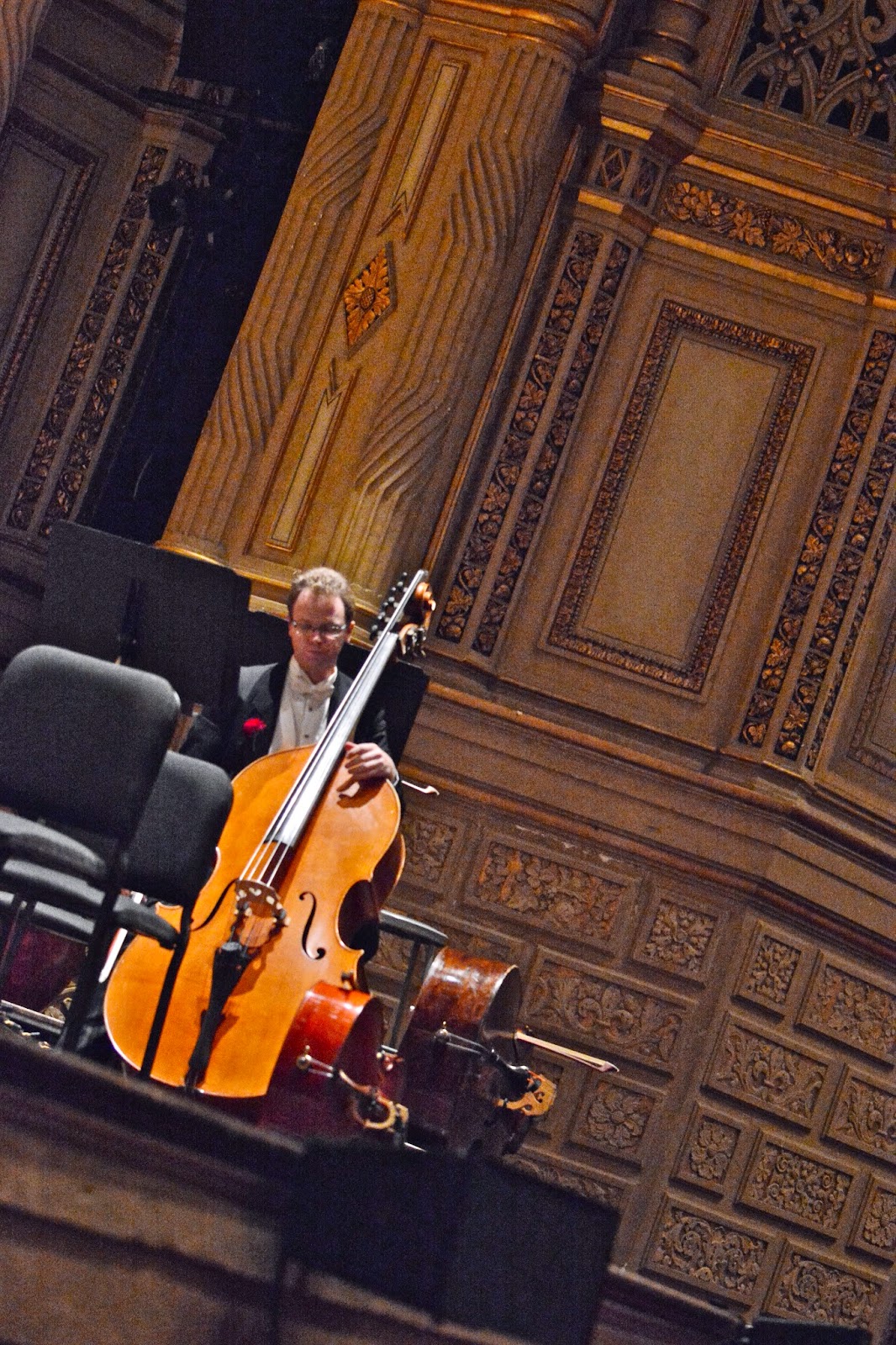 Inon Barnatan, the Israeli pianist, showed me elements of the Brahms Piano Concerto No.1 that I had never heard before.  His phrases had such momentum, it felt to me that the notes were still dripping from his fingers as threw them from the piano to the orchestra musicians and received them right back again.  That's the only way I can think to describe the excitement in his playing.  You can hear just a very short sample (just over a minute) in this video taken from their rehearsal.  Watch it to the very end, if you have time, and I think you will see what I mean.
There was more.  A contemporary work called A Thousand Natural Shocks (that link will take you to a video performance of it) by Kelly-Marie Murphy and a beautifully passionate performance of Also sprach Zarathustra had me applauding until my hands ached.  And Bill?  Well, as I said, I felt like the luckiest person in the world. 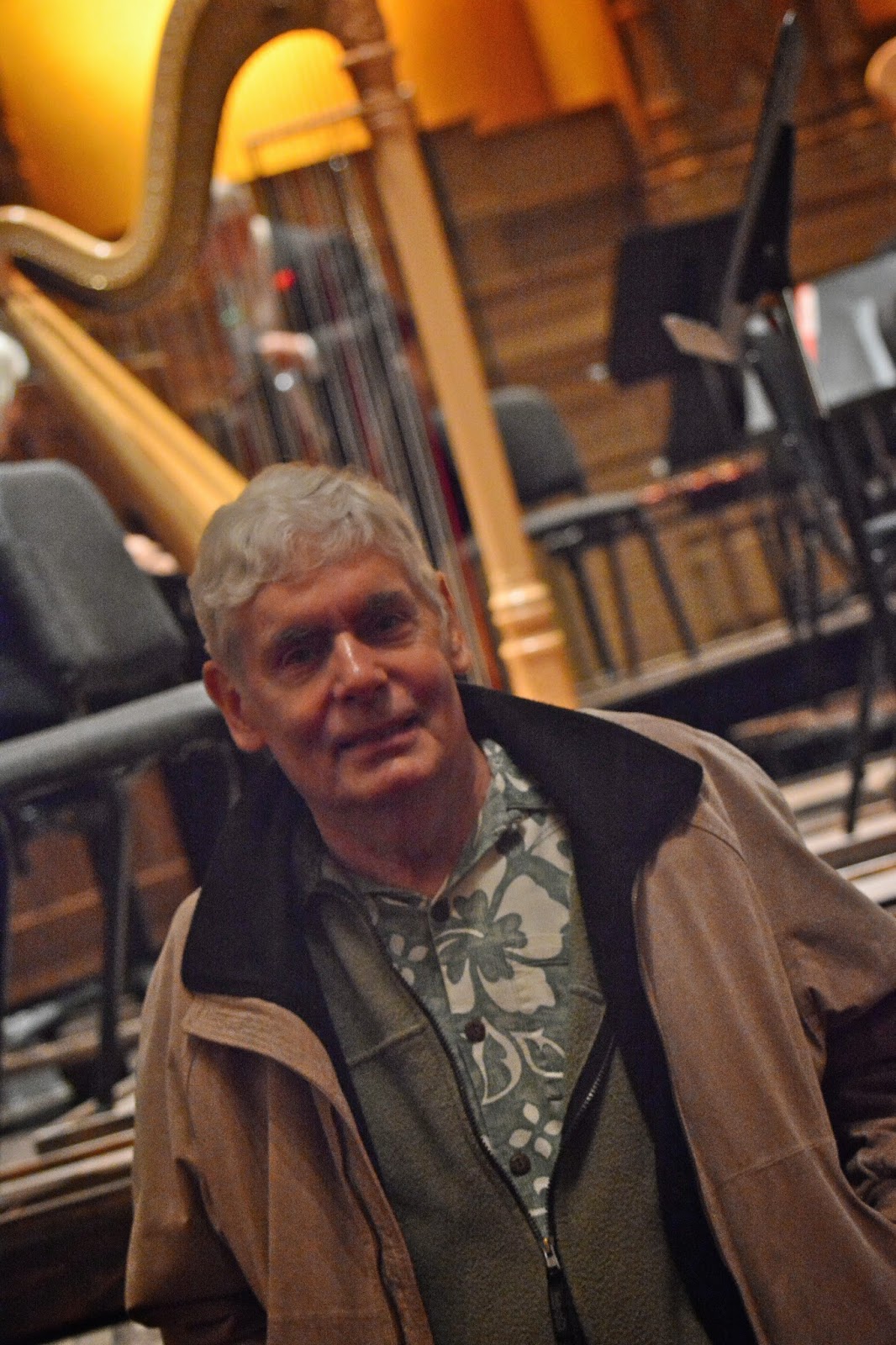 I took these last photos after the concert.  As usual, he made me laugh. 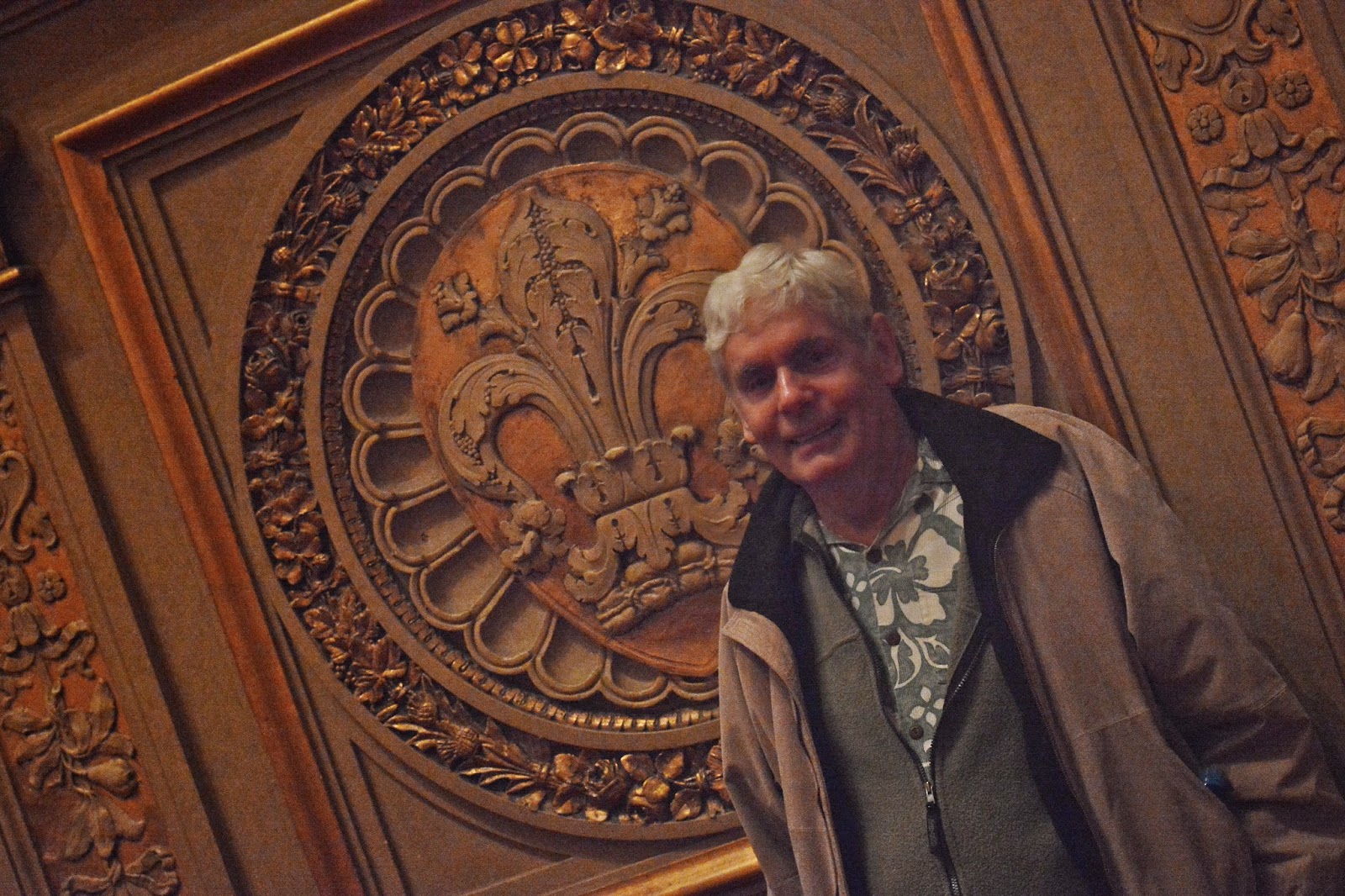 He stooped down for this last shot, trying to place the crest on his head like a hat.  I didn't quite manage to put that hat on straight :) but as with the music, the laughter continues in my mind this morning.  That was our world yesterday.  Thanks so much for giving me the chance to share it.  To glimpse moments in the lives of people all over the world, perhaps you will find some time to stop by Our World Tuesday for a visit.  Happy Tuesday to each one of you! 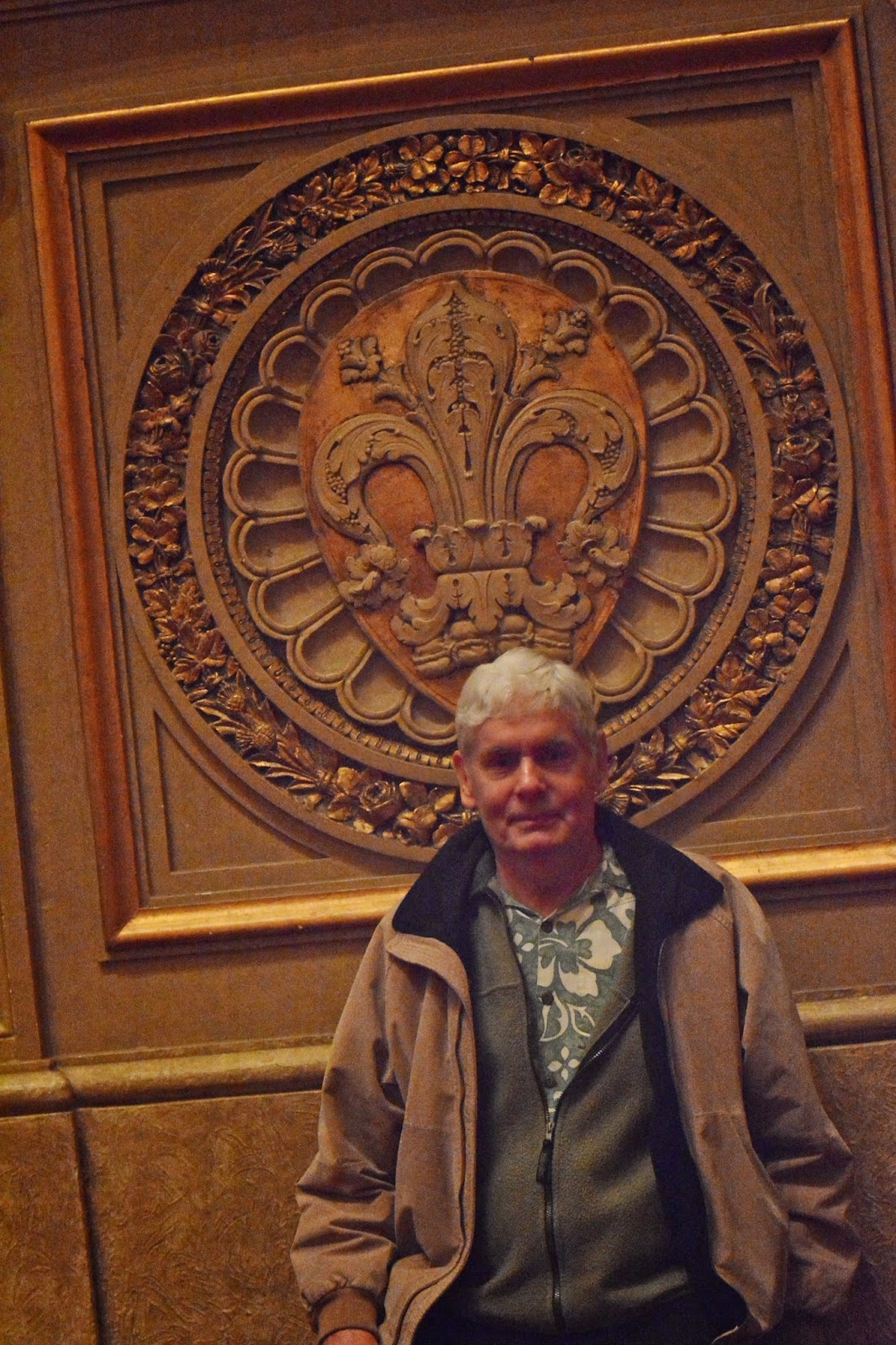