Critters, Fringe and an Inspiration

There were not a lot of critter sightings yesterday, so I hope you won't be too tired of hearing about our two wild birds that know us personally and about Black Jack, our dear little dog.  I'll share  the post with Eileen's Saturday's Critters.  I am grateful to her for giving us a place to share our critters.  She has been very brave to keep the meme going after losing her much-loved Goldie Girl on Labour Day weekend.  My heart goes out to her!

Tupper hadn't visited for a few days, so I was happy to see her yesterday, though I didn't manage a decent photo.  Here, she runs after me, feeling perhaps, that I had short-changed her a little on her salmon treats. 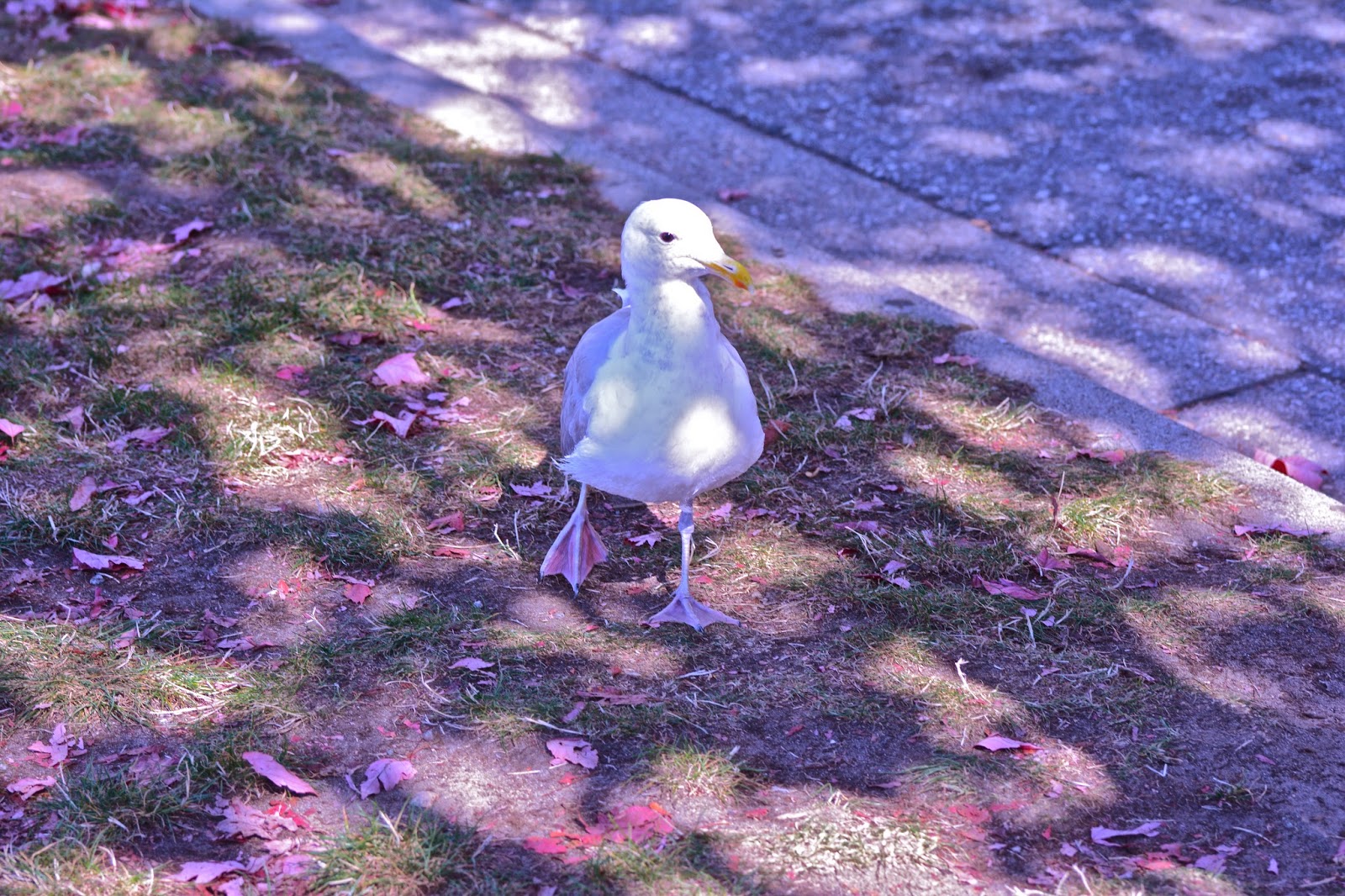 Cory finds me almost every time I leave the building.  She flies with me at about waist height across the street, and waits silently on the fence for her treats.  I am always touched by the gentle way she takes them from my hand.  I'm fairly certain that she has young in the area.  I've heard them calling and noticed that she seems to collect the treats in her mouth.  Perhaps, she eats a few and shares the rest. 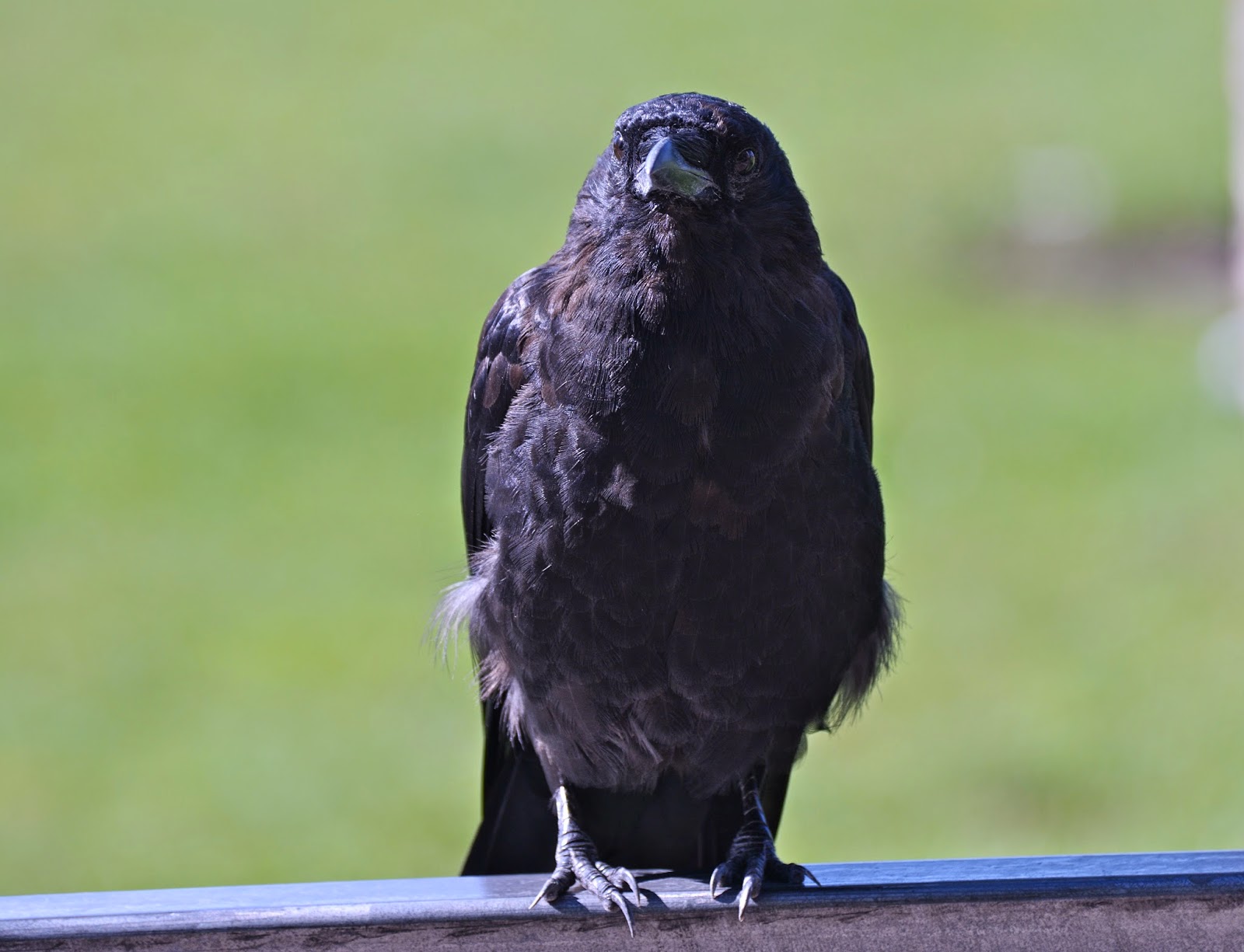 On the days when she and Tupper show up at the same time, 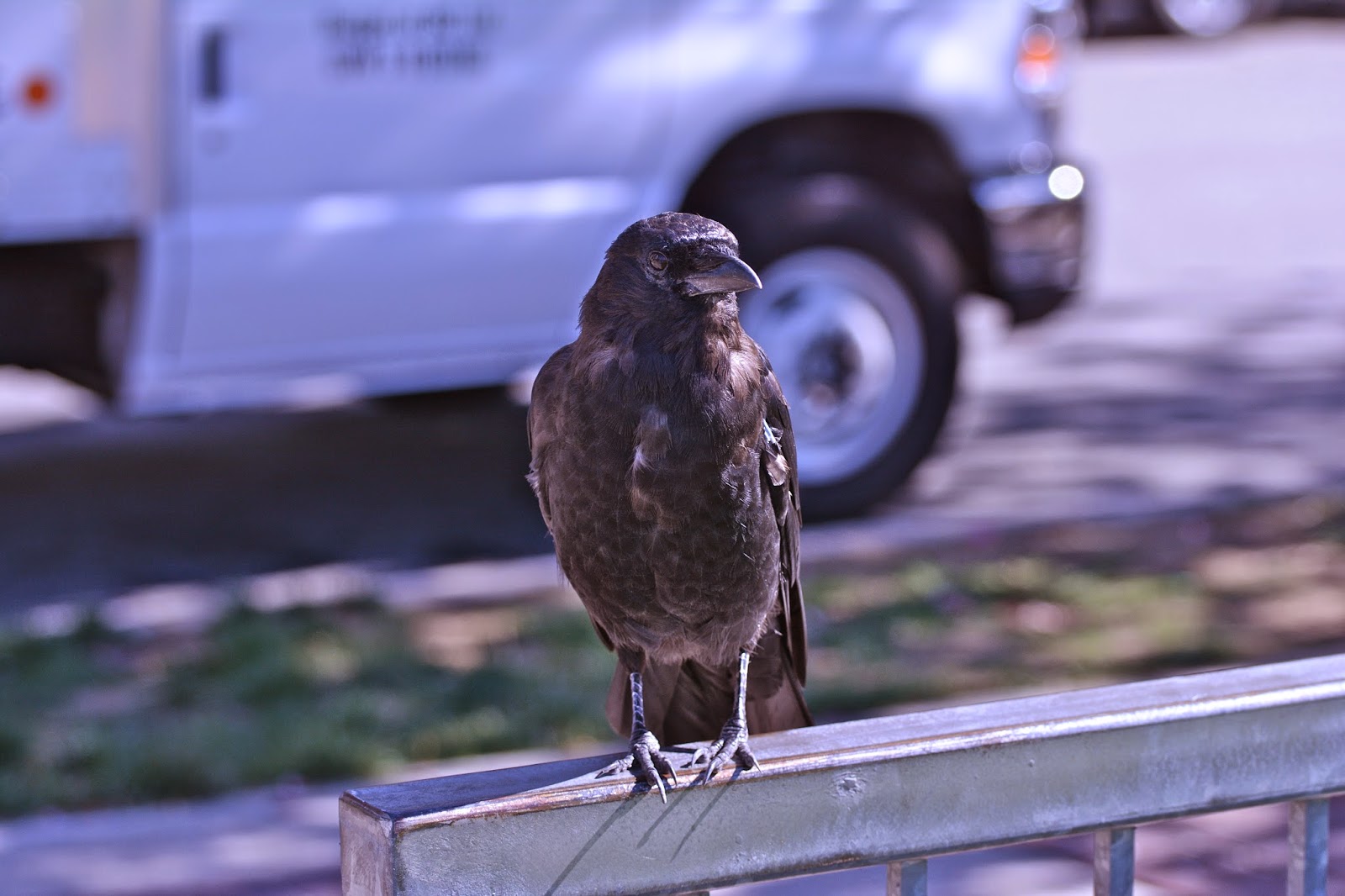 they wait separately while I give each of them their treats.  Yesterday, Tupper seemed to warn Cory, though, to keep her distance. 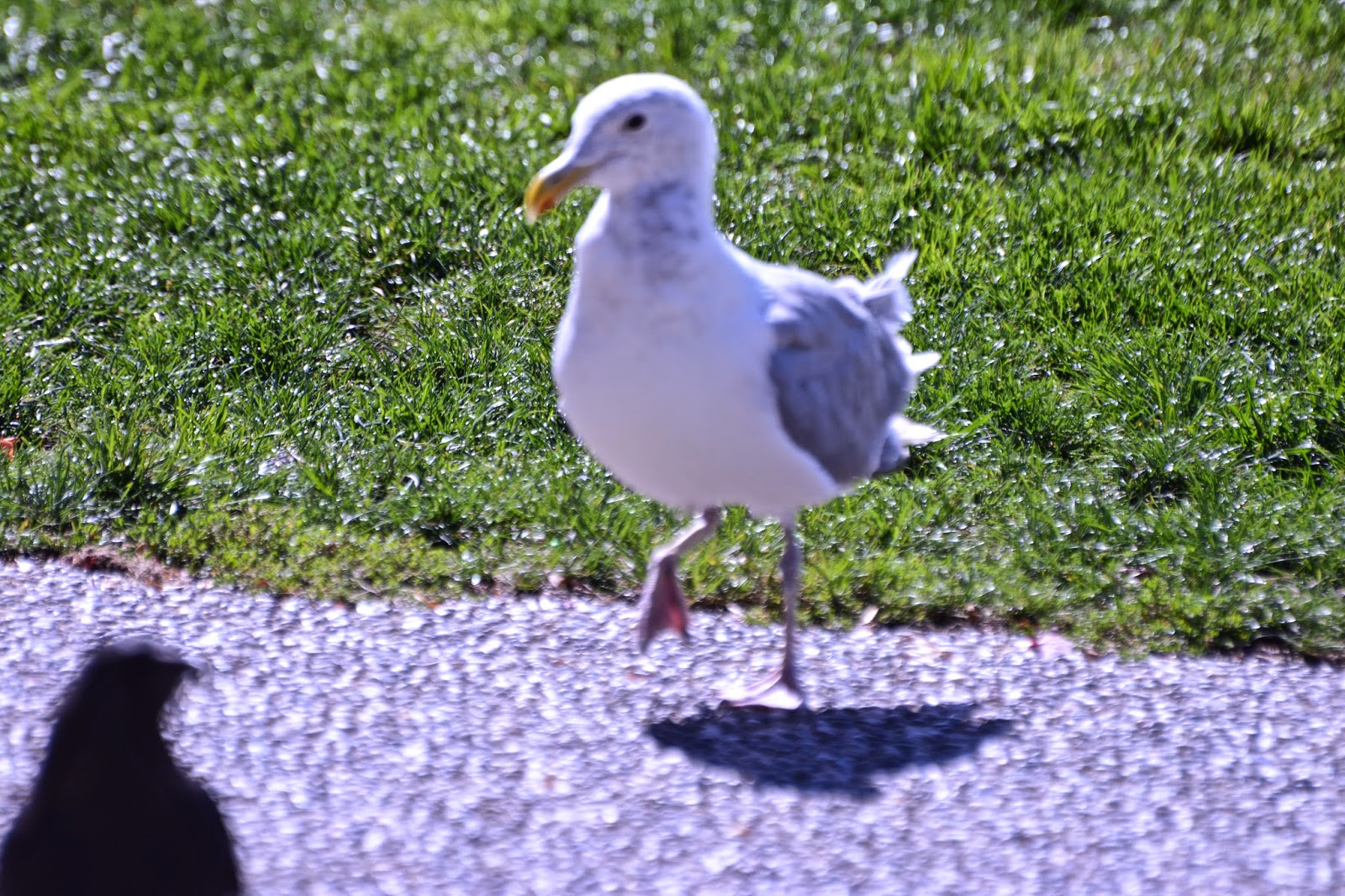 Black Jack had four beds, but this one, the first I bought for her, had been put away after washing it.  I had almost forgotten about it as the other three had served her needs well, but a couple of days ago, she ran around with one of the smaller beds in her mouth, shaking it wildly, thus causing it to lose a good portion of its stuffing.  We guiltily put it in the garbage, and Bill did the somewhat irksome task of stuffing the foam rolls back into this one.  Black Jack was delighted and immediately climbed into it. 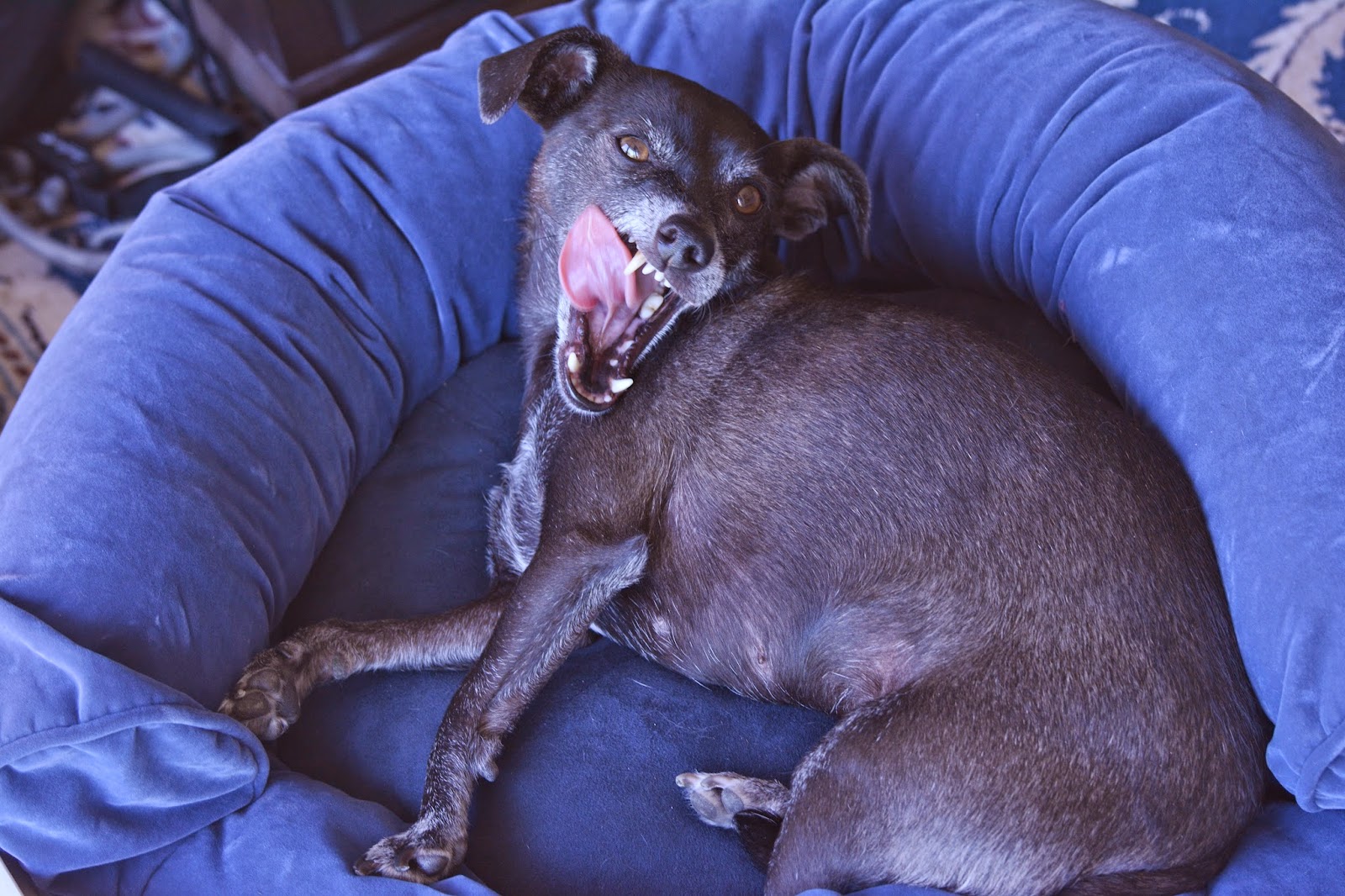 The length of her tongue and the variety of positions it assumes amazes me when she  yawns. 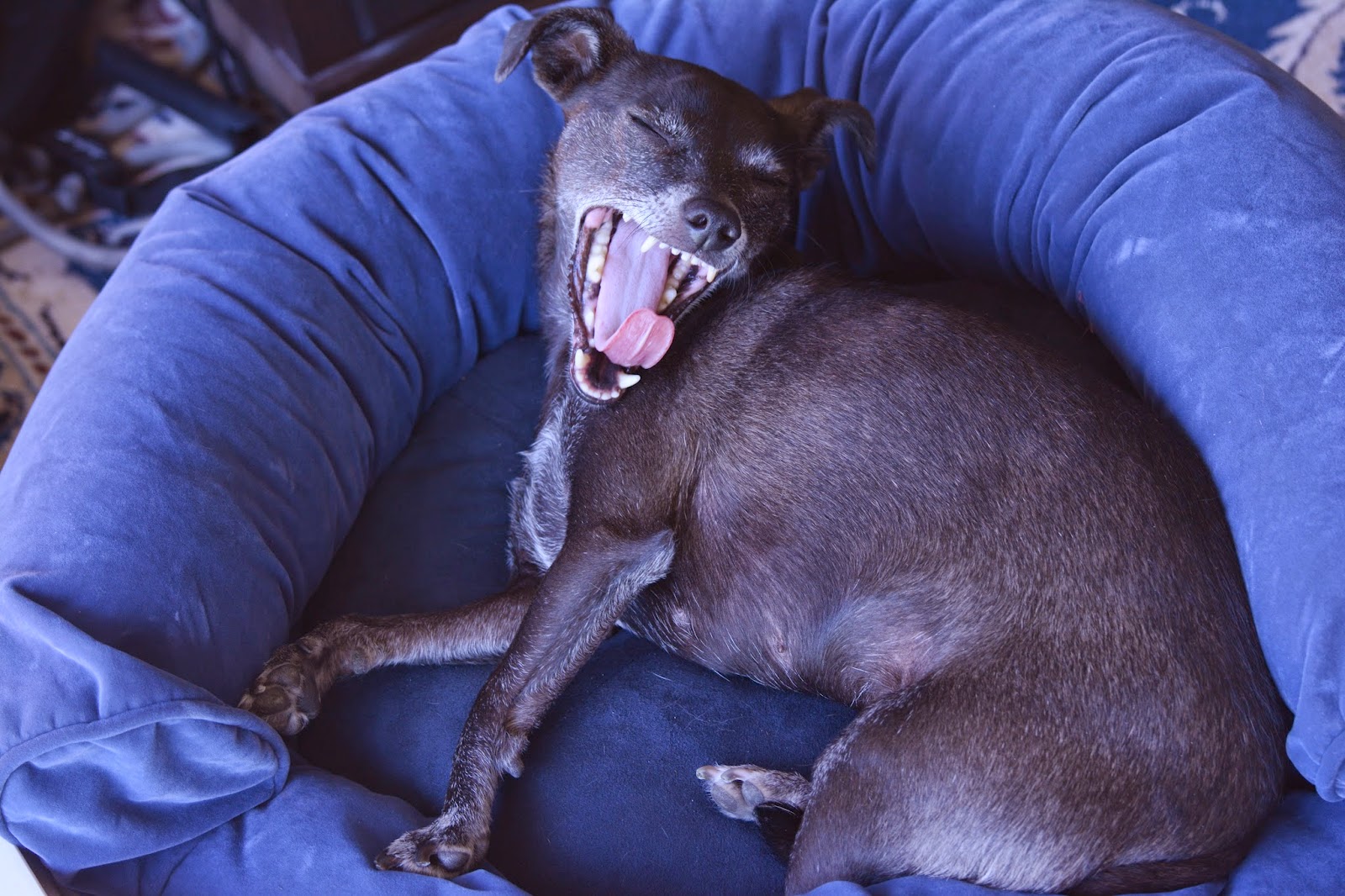 Her grins also make me smile. 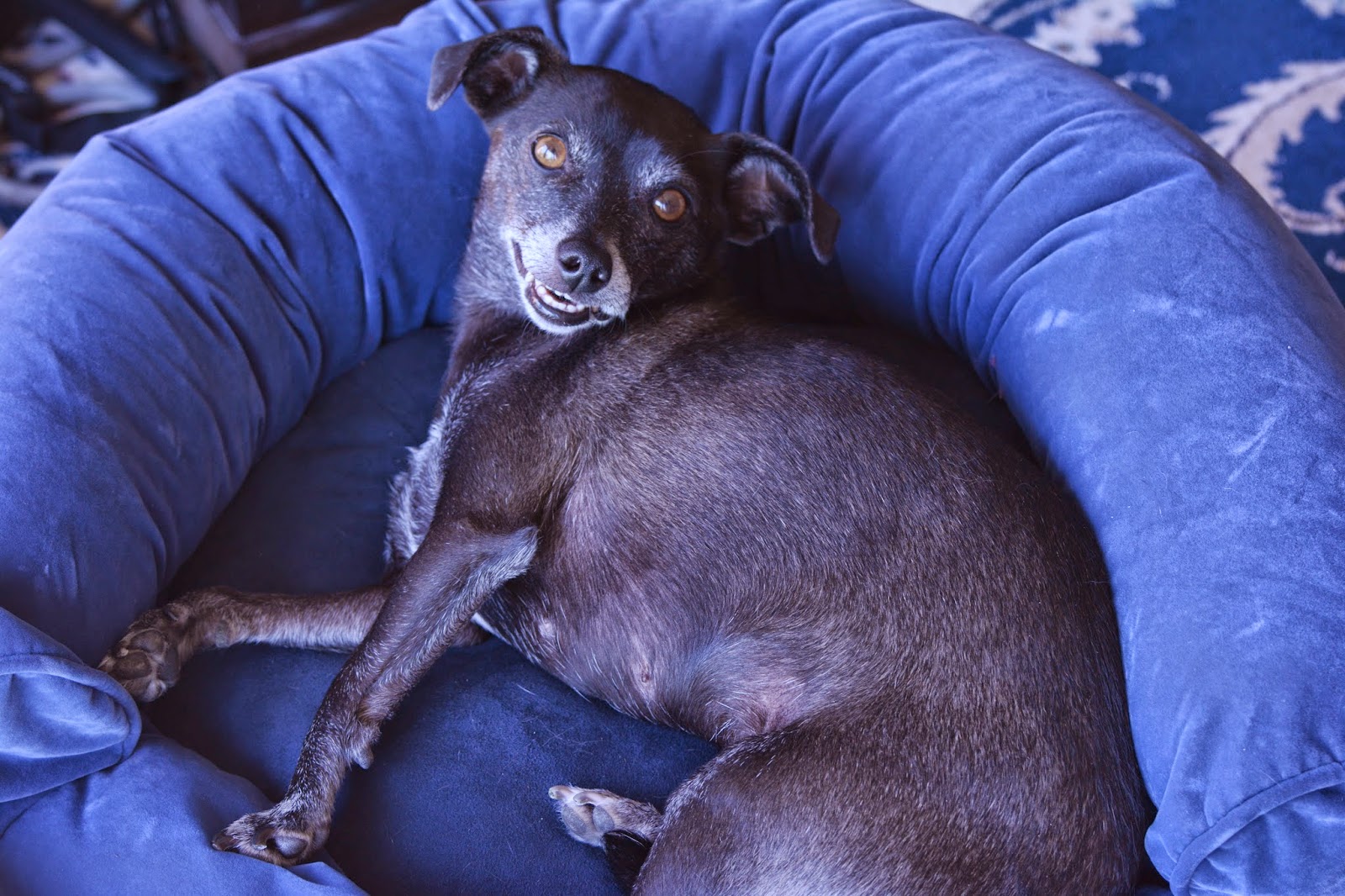 Black Jack came from Ginger's Deathrow Rescue in Seattle.  She had been in a shelter in California where they euthanize 50 dogs every other day.  When I drove to Seattle to pick her up after weeks of negotiations with Ginger, I bought this bed and took it with me in the car that I had rented for the trip.  I also took a crate, just in case she didn't travel well, but she crawled into the bed and slept the whole way back to Vancouver.  I think she was happy yesterday to see her first bed again.  I am happy that Ginger is still rescuing dogs and that petfinder.com put me in touch with her. 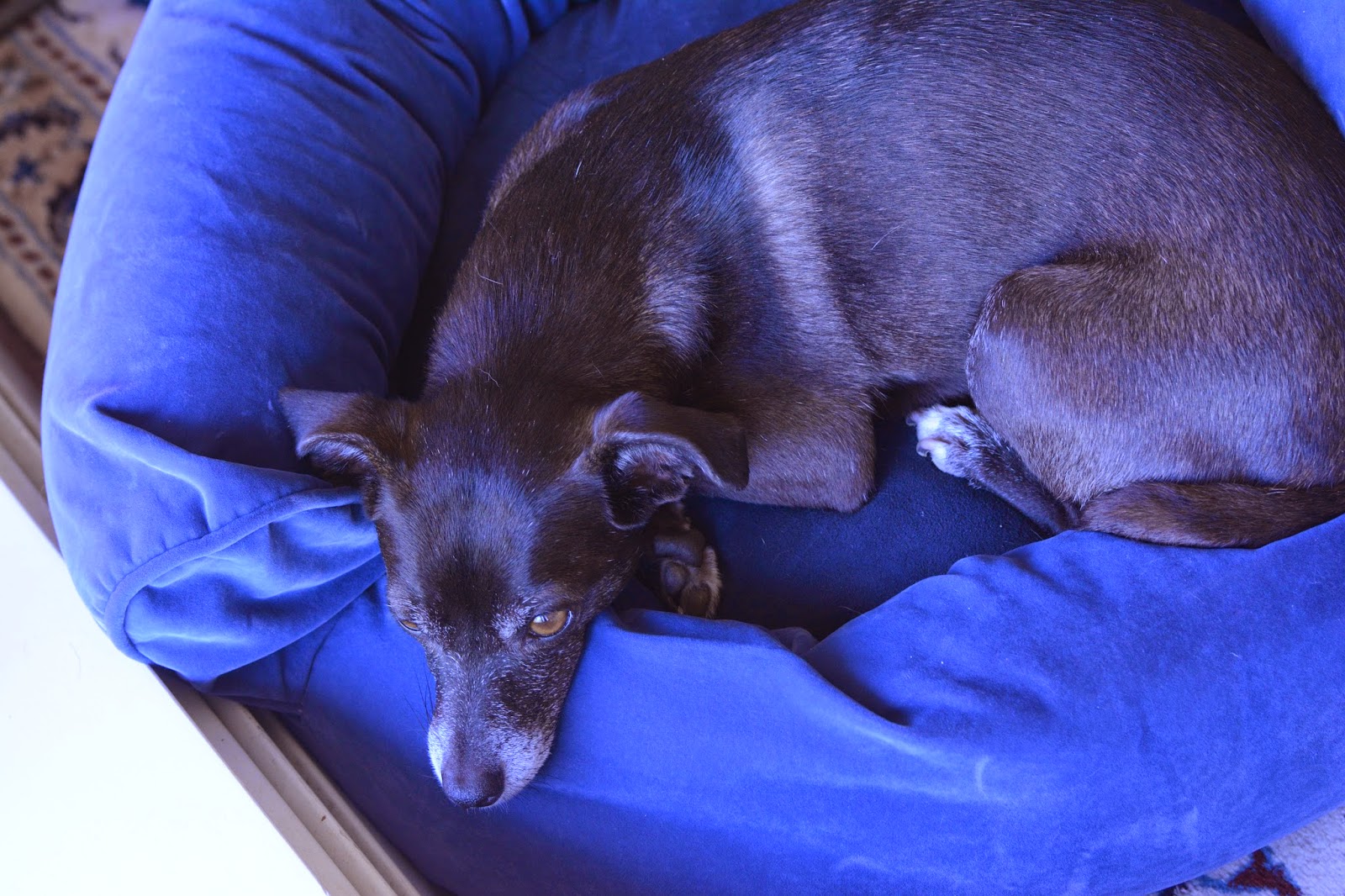 Here is one more shot of Tupper as she flew off the lamp post yesterday.  She watches the playground for leftover bits from children's lunches. 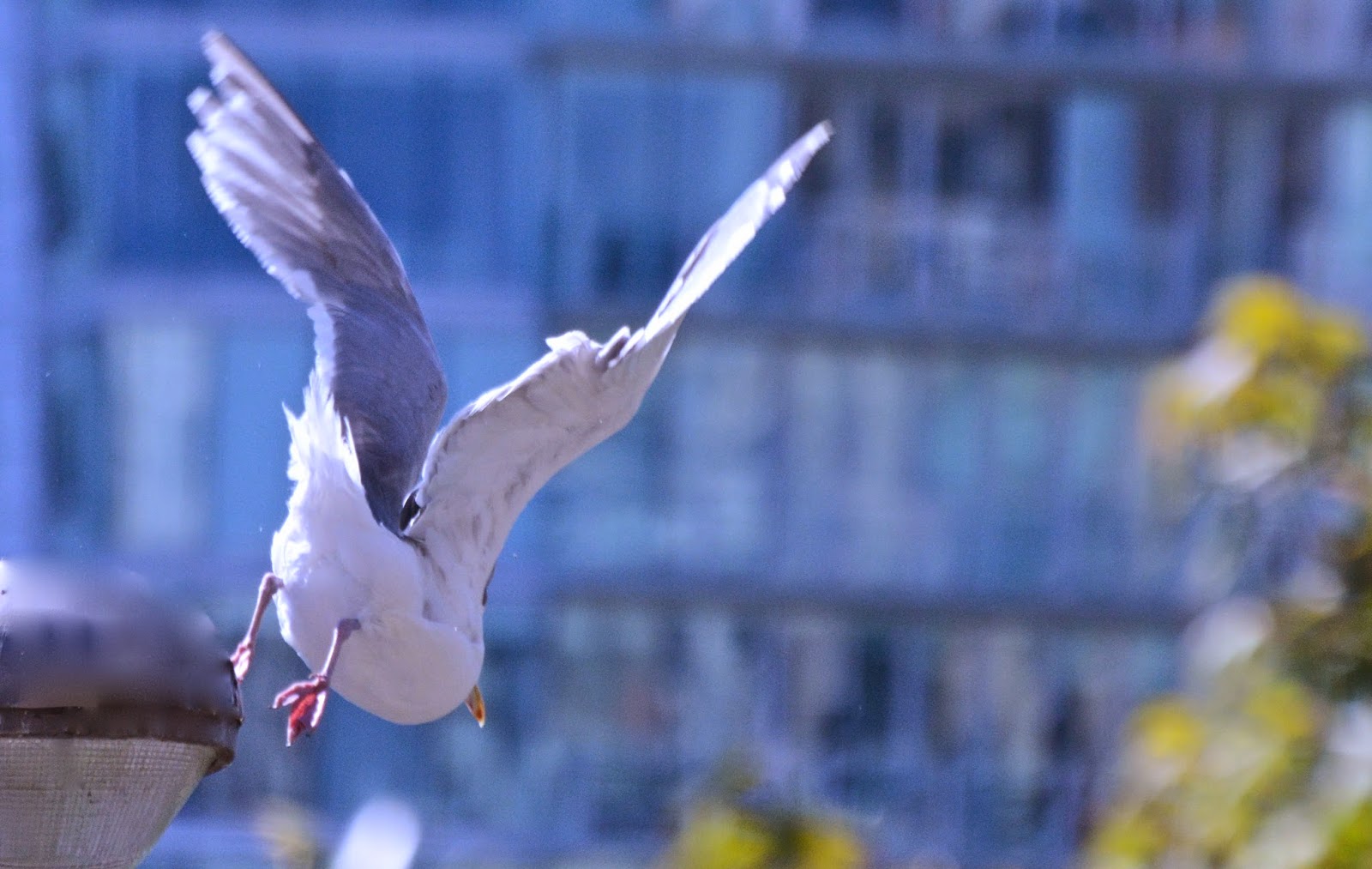 And, here is Black Jack, looking like a little racedog yesterday, as she bolts out of the.. 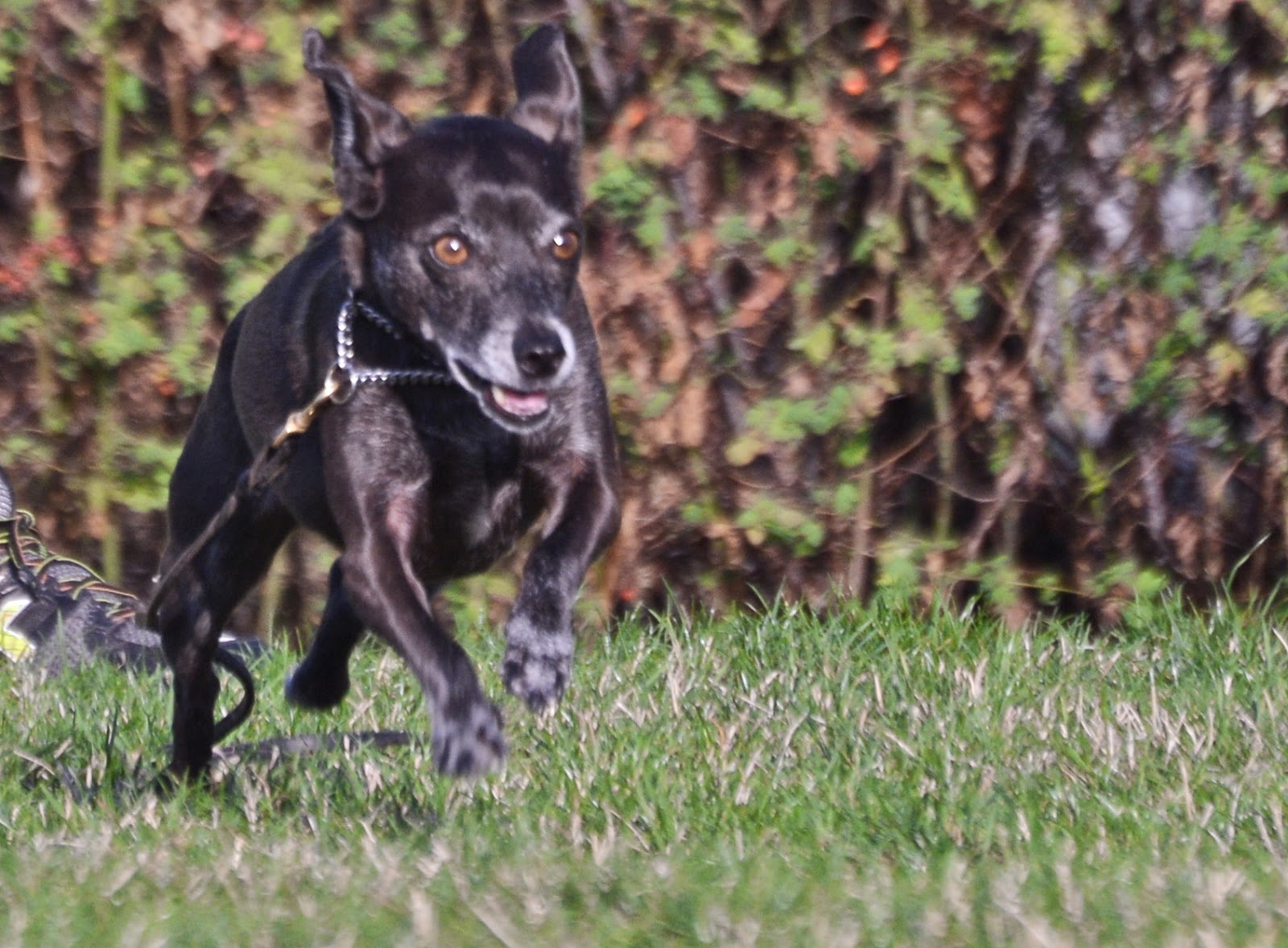 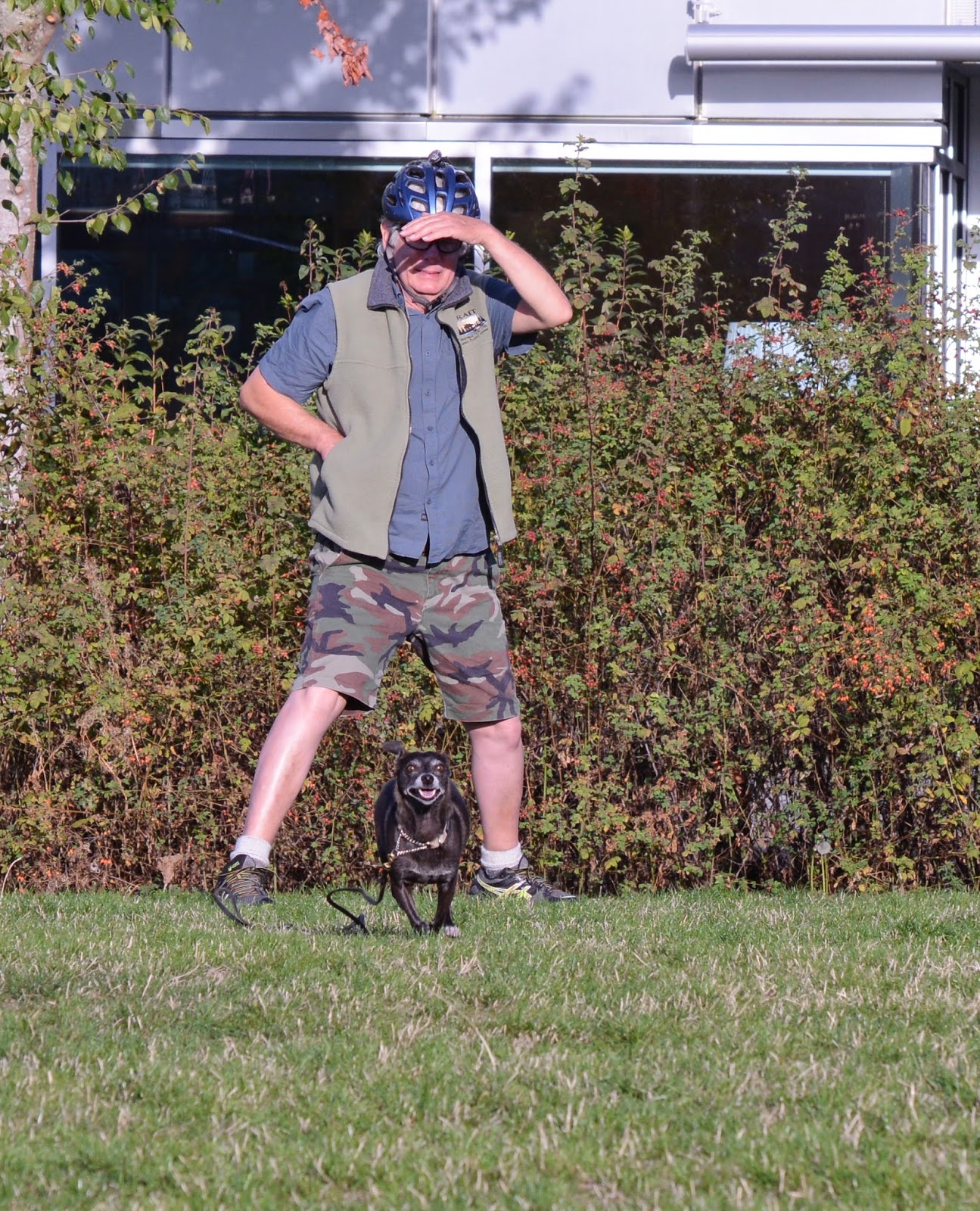 Just a few more shots of her happy.. 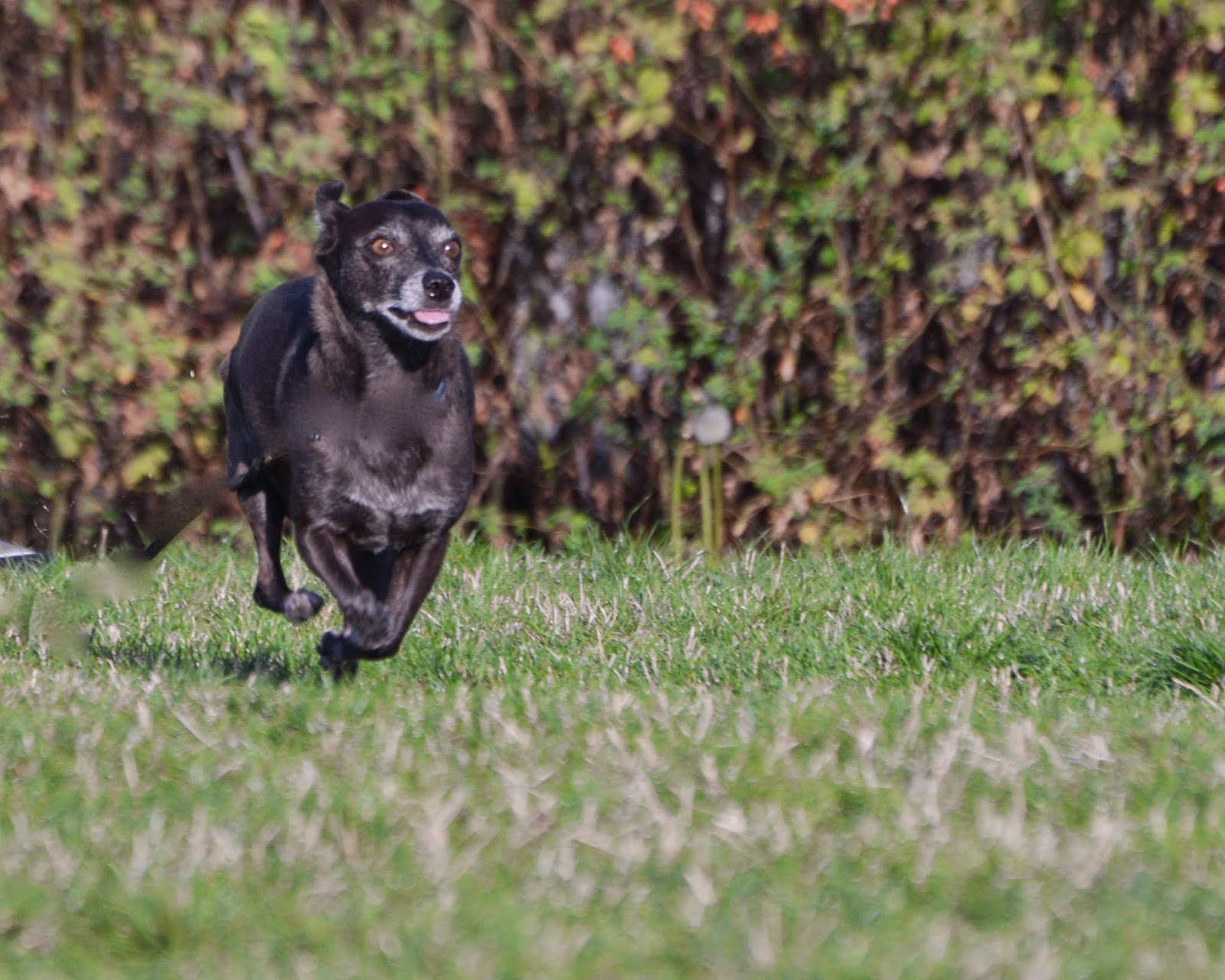 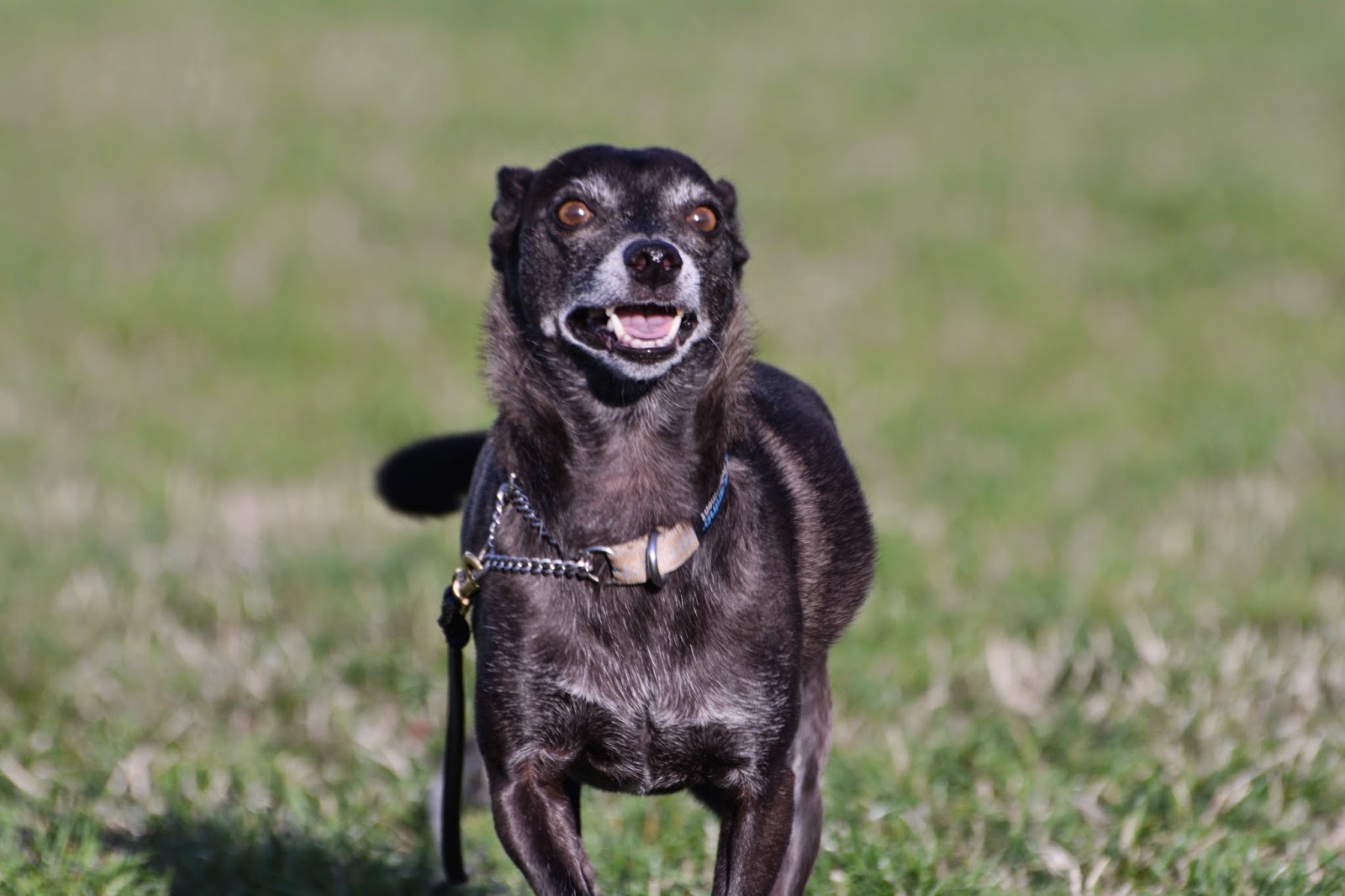 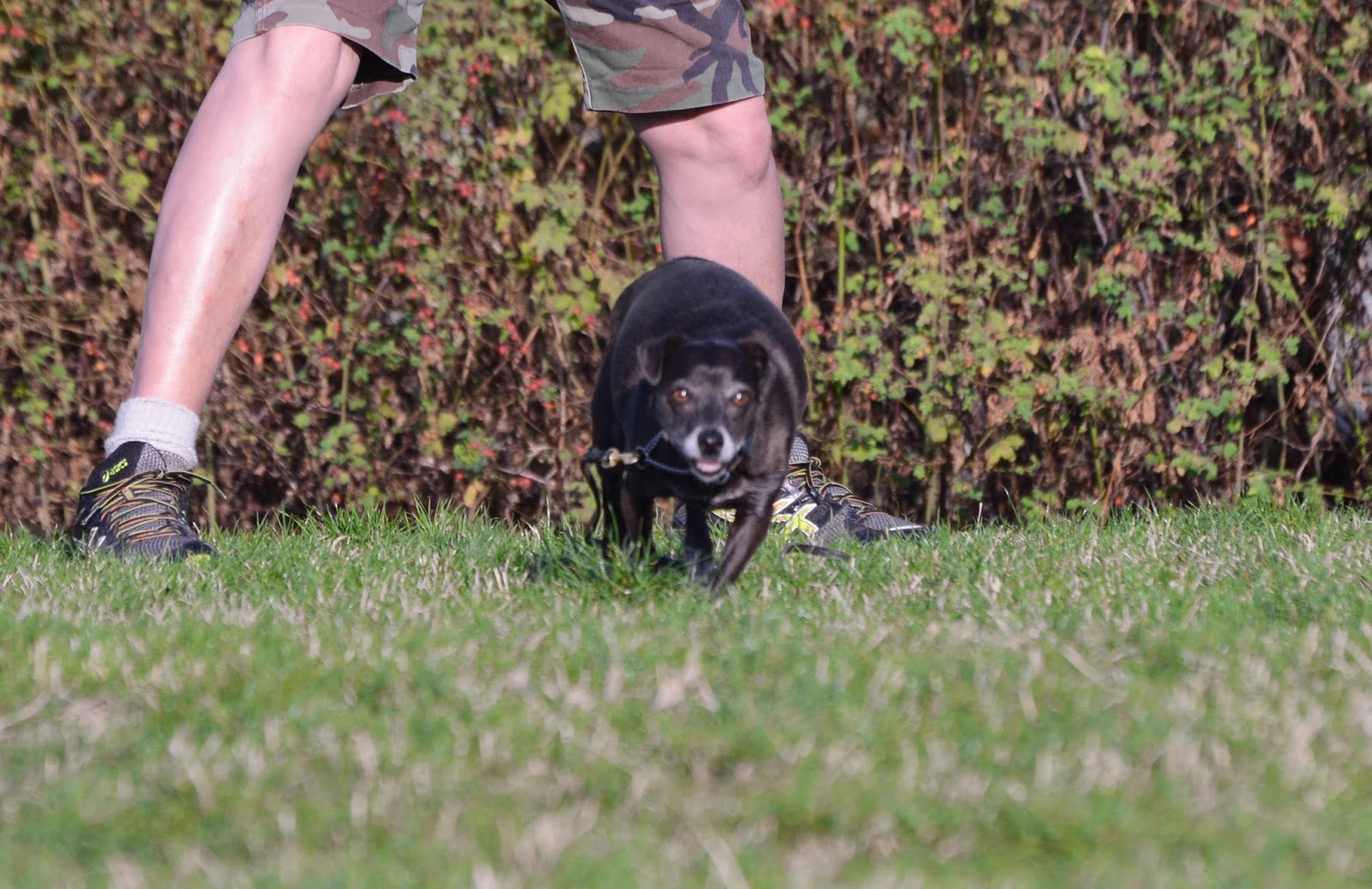 That is the end of the critter portion of the post, though Black Jack was with us as we attended an outdoor performance last evening on Granville Island of Herm and Gertie, one of many Fringe Festival options.  It was listed as taking place in the Sculpture Grove, but we couldn't see any sculptures except for this apparatus that had no descriptive plaque and looked more like a garbage bin than a work of art.  It was used to represent the gingerbread house in an adaptation of Hans Christian Anderson's "Hansel and Gretel".  That play, by the way is listed here as one of the ten most gruesome fairy tales of all time. 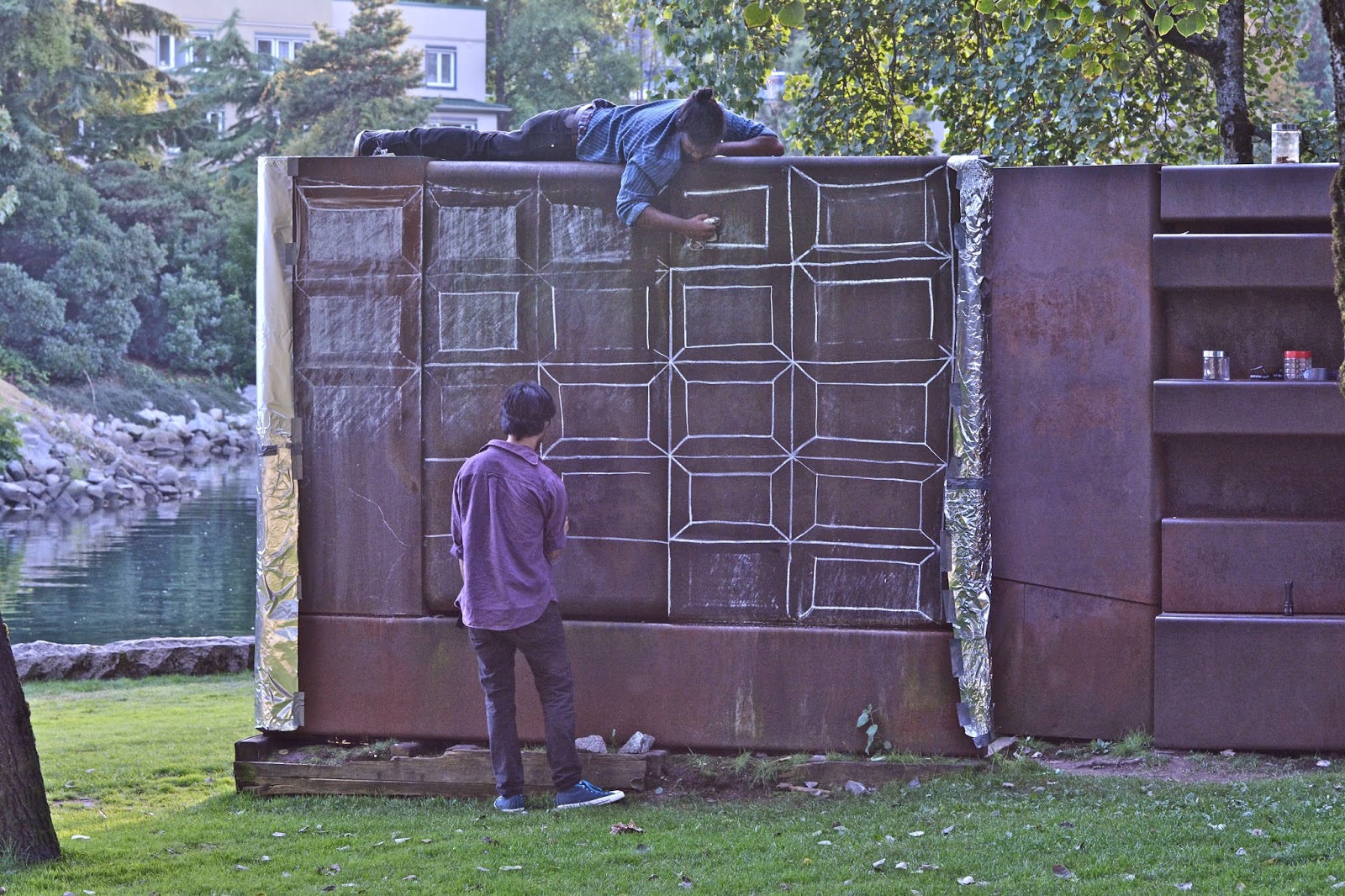 This was the view as we looked across False Creek before the play began. 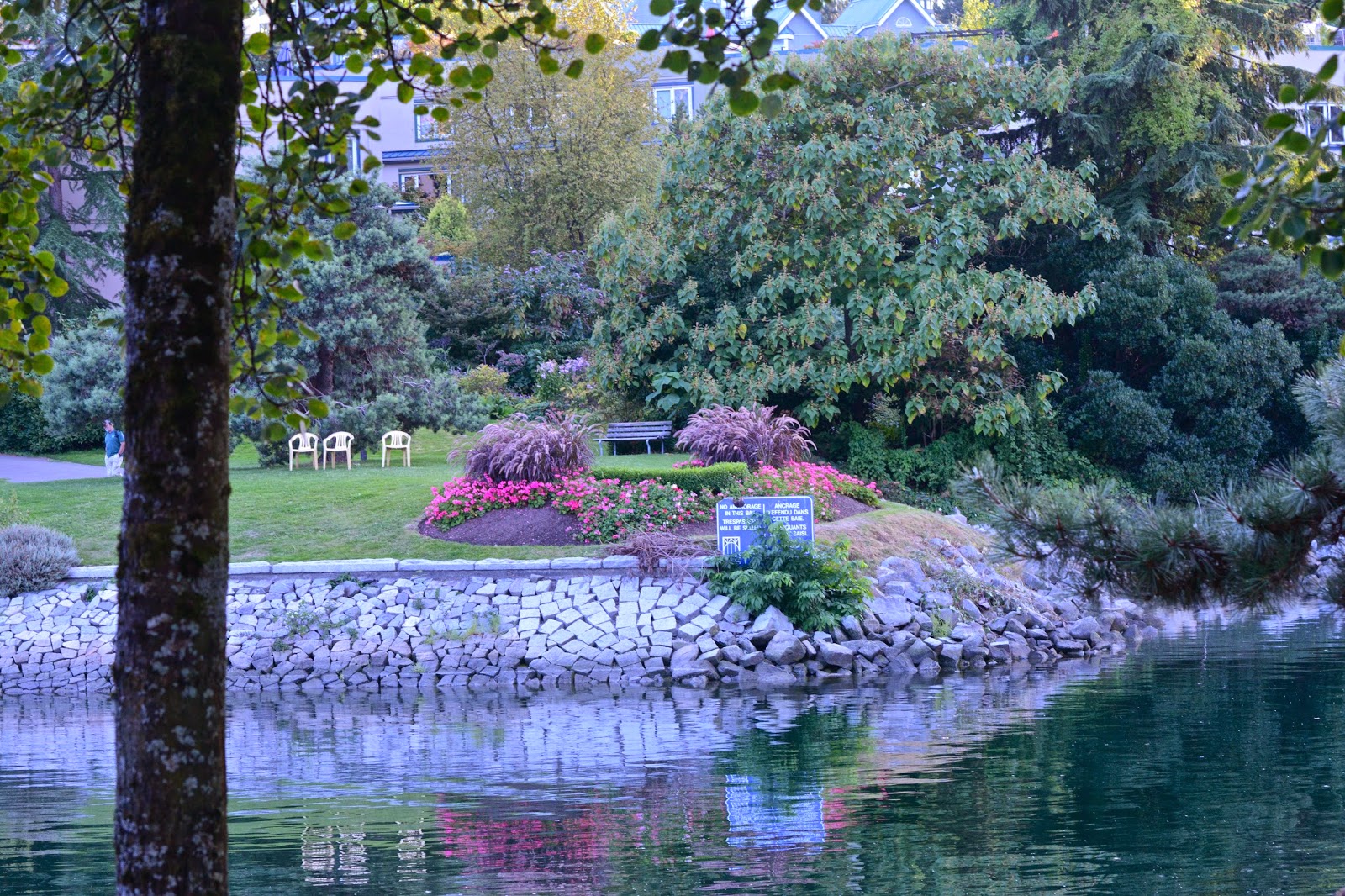 We saw this tarp by the edge of the seawall and thought it belonged to a homeless person.  Later, we realized it was a part of the set.  Though the audience didn't have to step down to that area, they did have to follow the actors through a small section of the park. 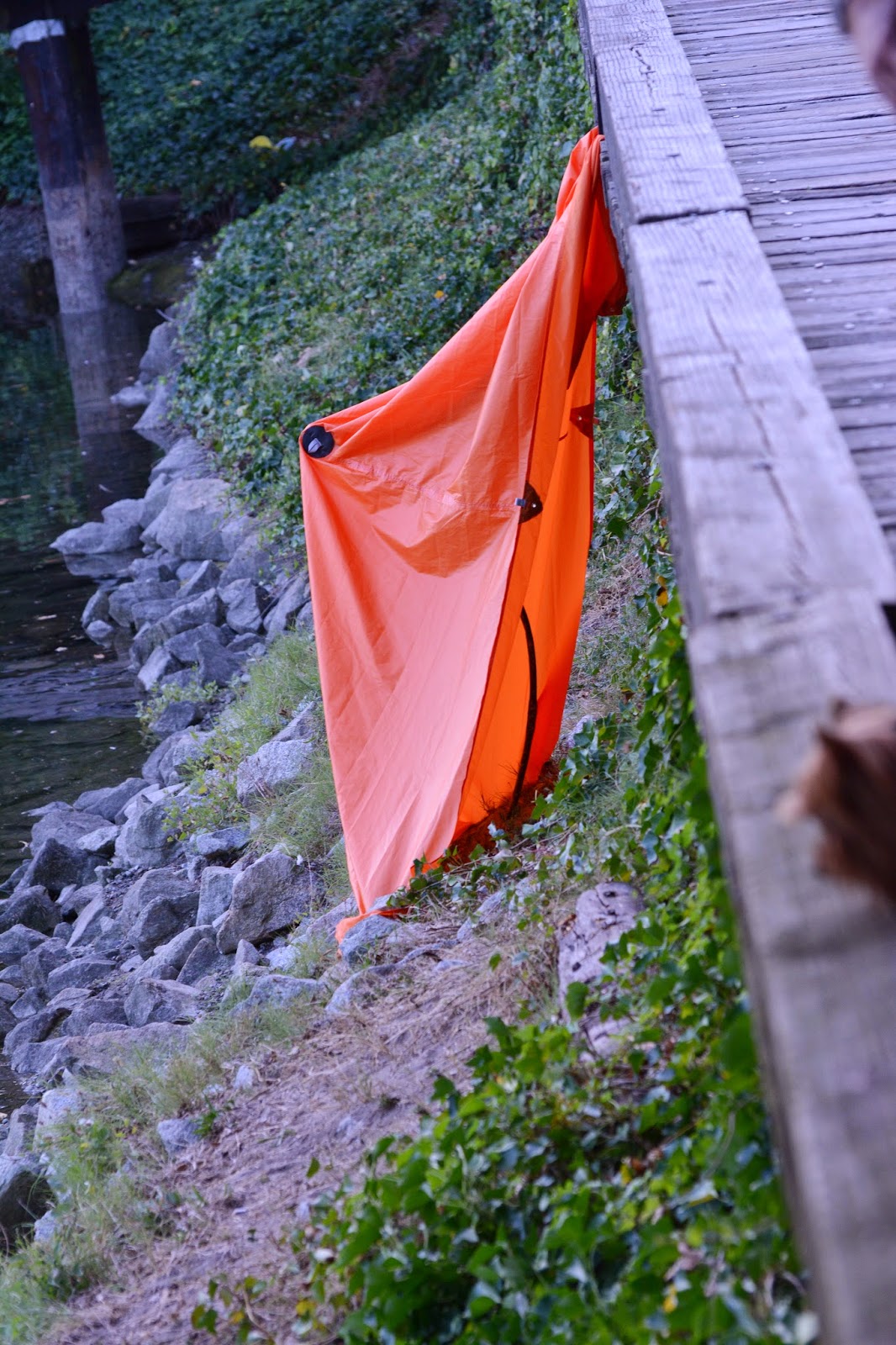 The actors worked very hard to perform this play, and though we didn't appreciate it fully because of a lack of projection at times, and from circumstances out of their control at others, I am realizing the play stimulated laughter this morning, research on Han Christian Anderson (who knew he was a vegetarian?) and lots of thought.  But here is one example of the challenges we faced: when I didn't sit down on the grass as instructed, preferring to stand at the back of the crowd, I was reminded I had to sit.  For their future understanding, it is difficult for some older people to get down on the ground (we were a good 30 years older than any other audience members), and in my case, I was holding Black Jack under one arm, supporting a camera around my neck, and nursing a still sore right arm after an injury a few weeks ago.  Bill and I got down on one knee and suffered as long as we could before finally standing.  They also blindfolded the audience members, had them hold a white rope, and then led them through the "forest" to simulate Hansel and Gretel's experience.  This is a creative idea and I applaud them.  It is one of the goals of The Fringe to try out such strategies to engage the audience.  And to give them their credit, they gave us a choice about being blindfolded (we both opted out and tried to close our eyes but mostly peeked :) 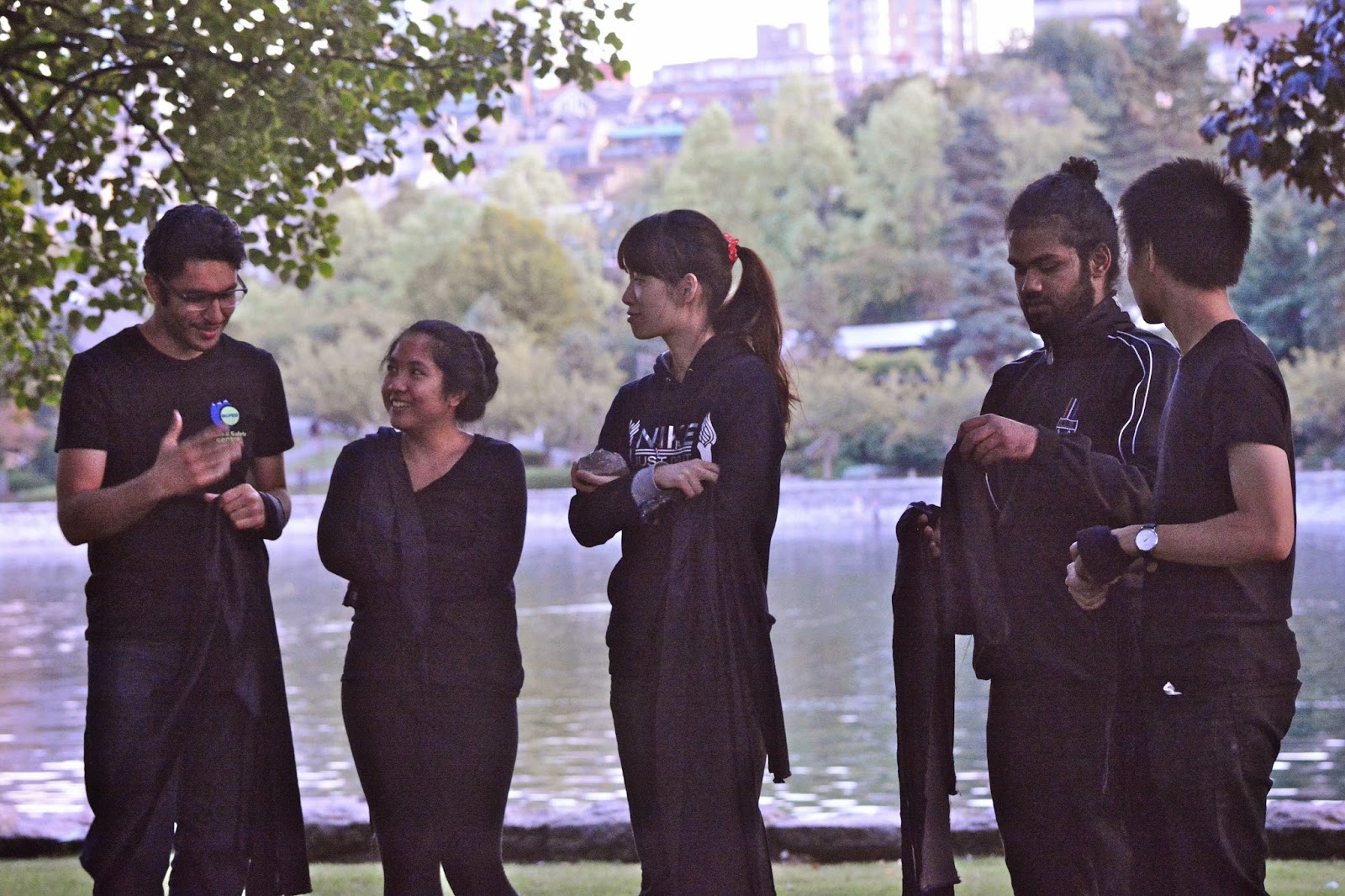 The following words from this review will give you a good idea of the situation we found ourselves in: "Some viewers will be right in their element, but undoubtedly some others will be put off. I was into it myself, but I did have a few neighbours in the crowd who were wearing some decidedly [unhappy] faces. I would concede that the final act of the play was slow and a bit drawn out and right when things were at their strangest. It was a bit of a task to get through."  This morning Bill and I talked about it, and truthfully, he had me just about doubled over with laughter.  Perhaps you had to be there, but when he said, "My first thought was where do we go to get a refund.." and then he added, "They seemed like such nice kids," I found it difficult to make breakfast in between fits of spluttering. The lack of projection at the beginning is an area the actors could work on, but I cannot for a moment fault the effort and thought that went into this very accurate modern-day depiction of Hansel and Gretel.  And the bottom line is that I'm happy (now) that we went.  Not so sure about Bill :)  Here are my very poor photos taken during the play, this first of the pink skies as the sun set, 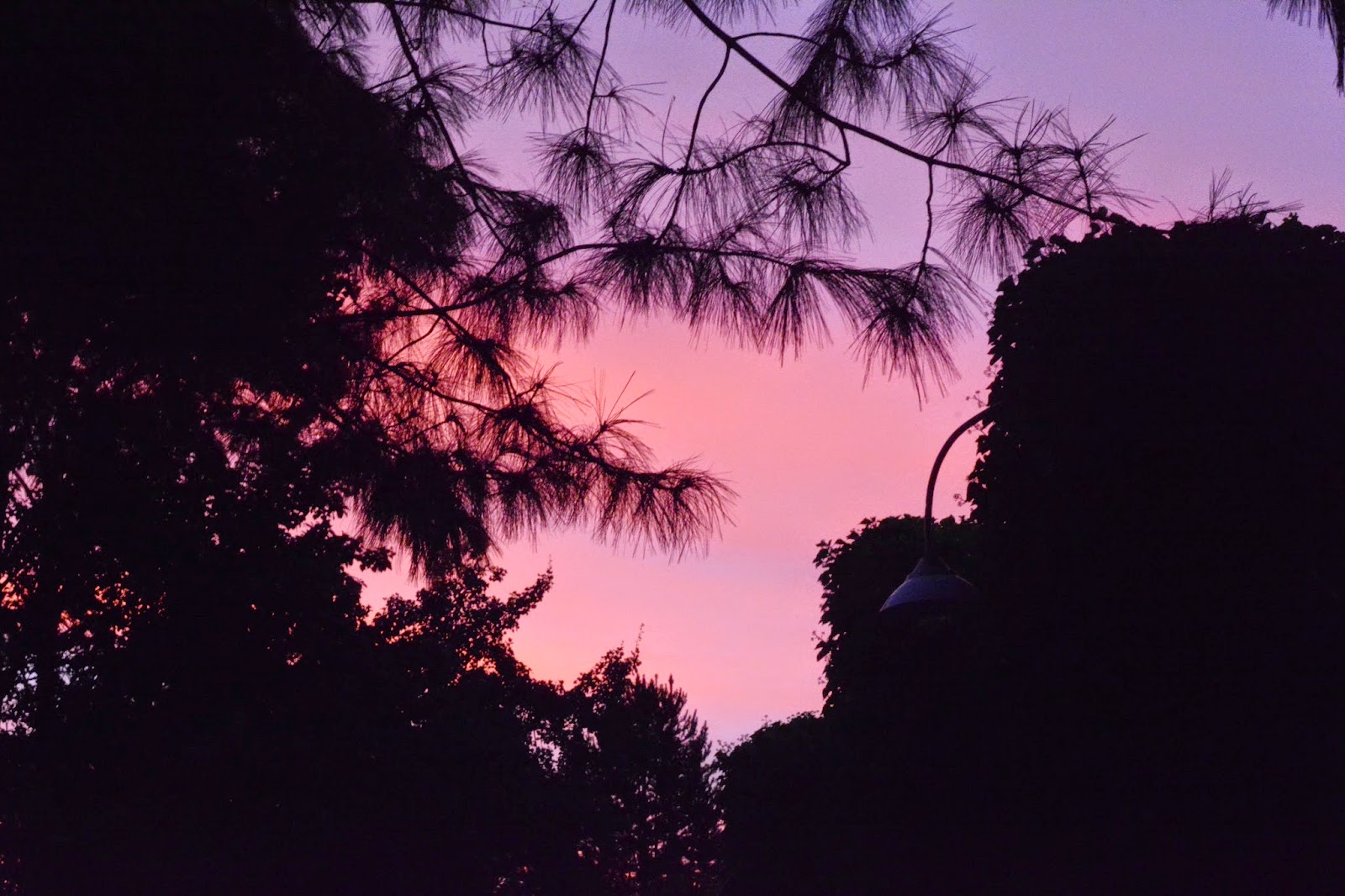 and this next of the sky's reflection in False Creek. 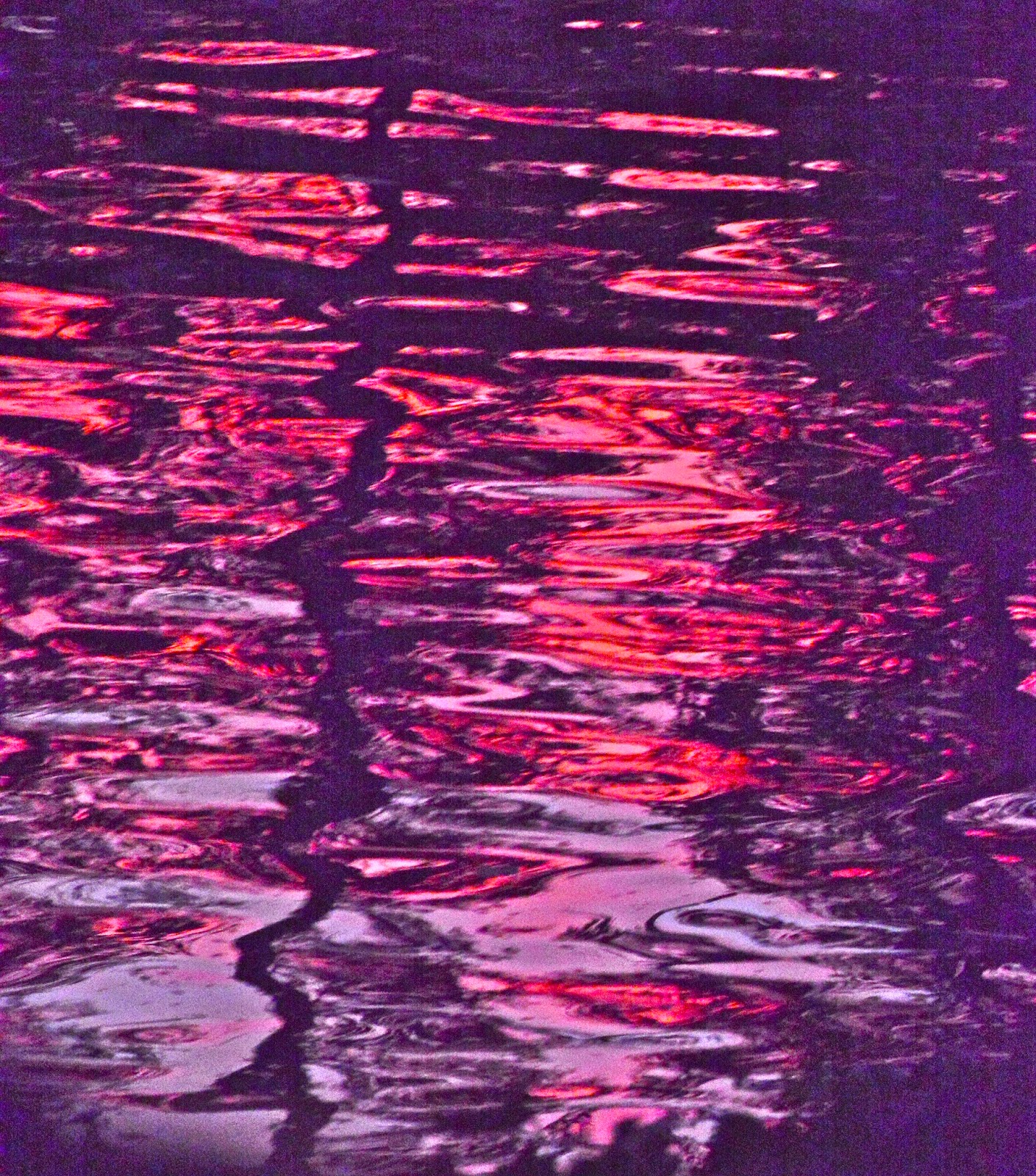 The rest were of the performers..  perhaps they will give you a feeling for the atmosphere. 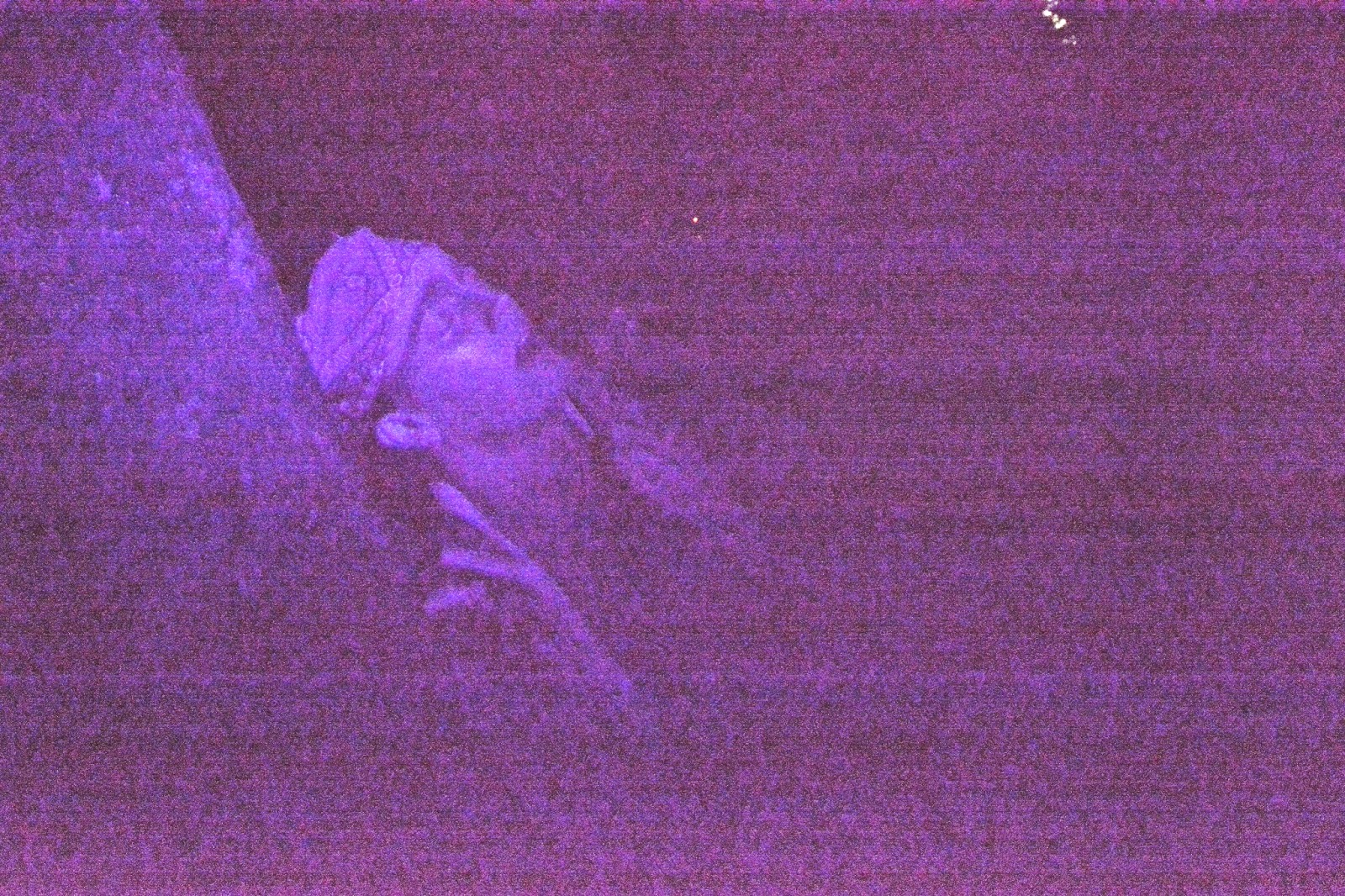 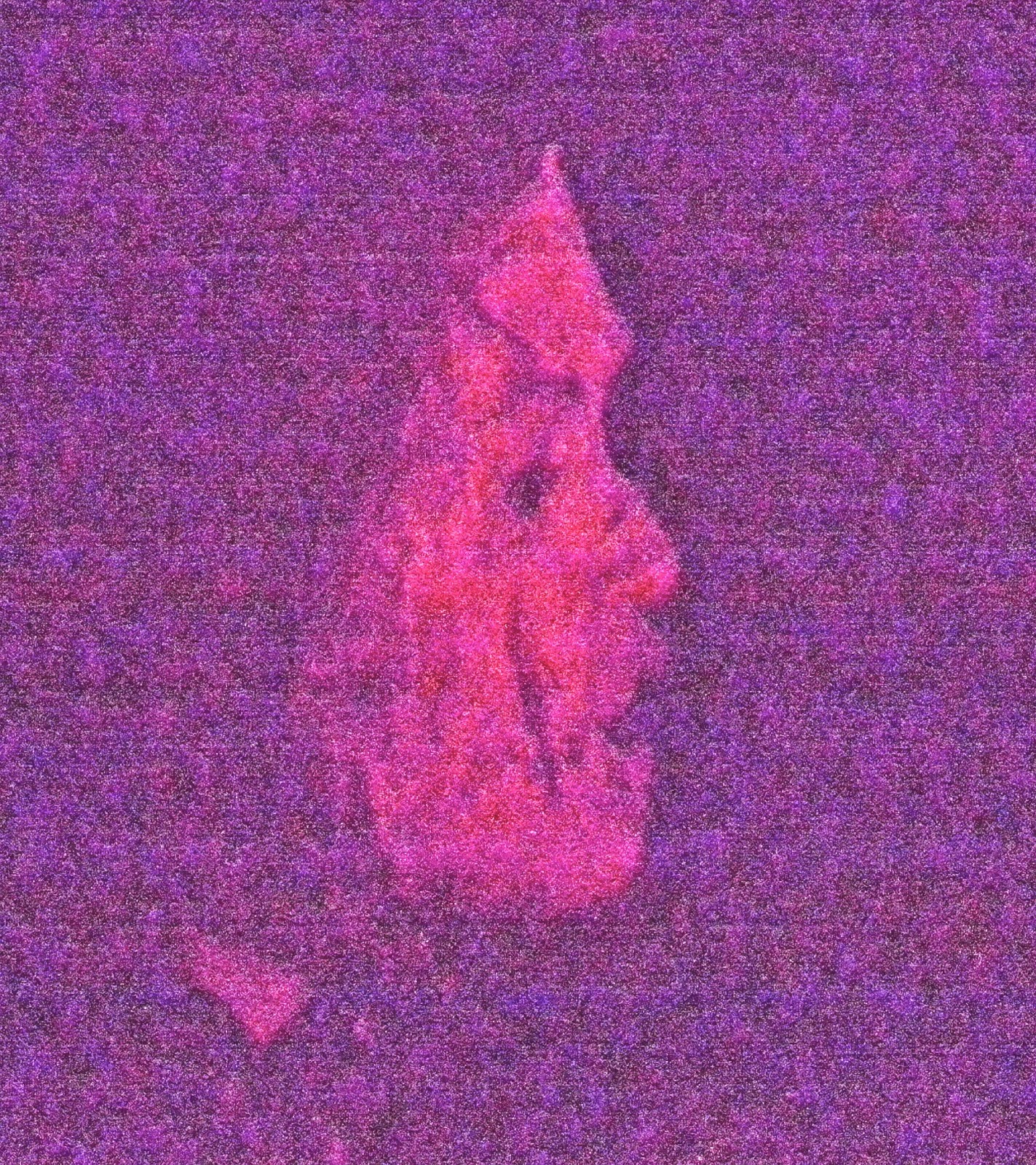 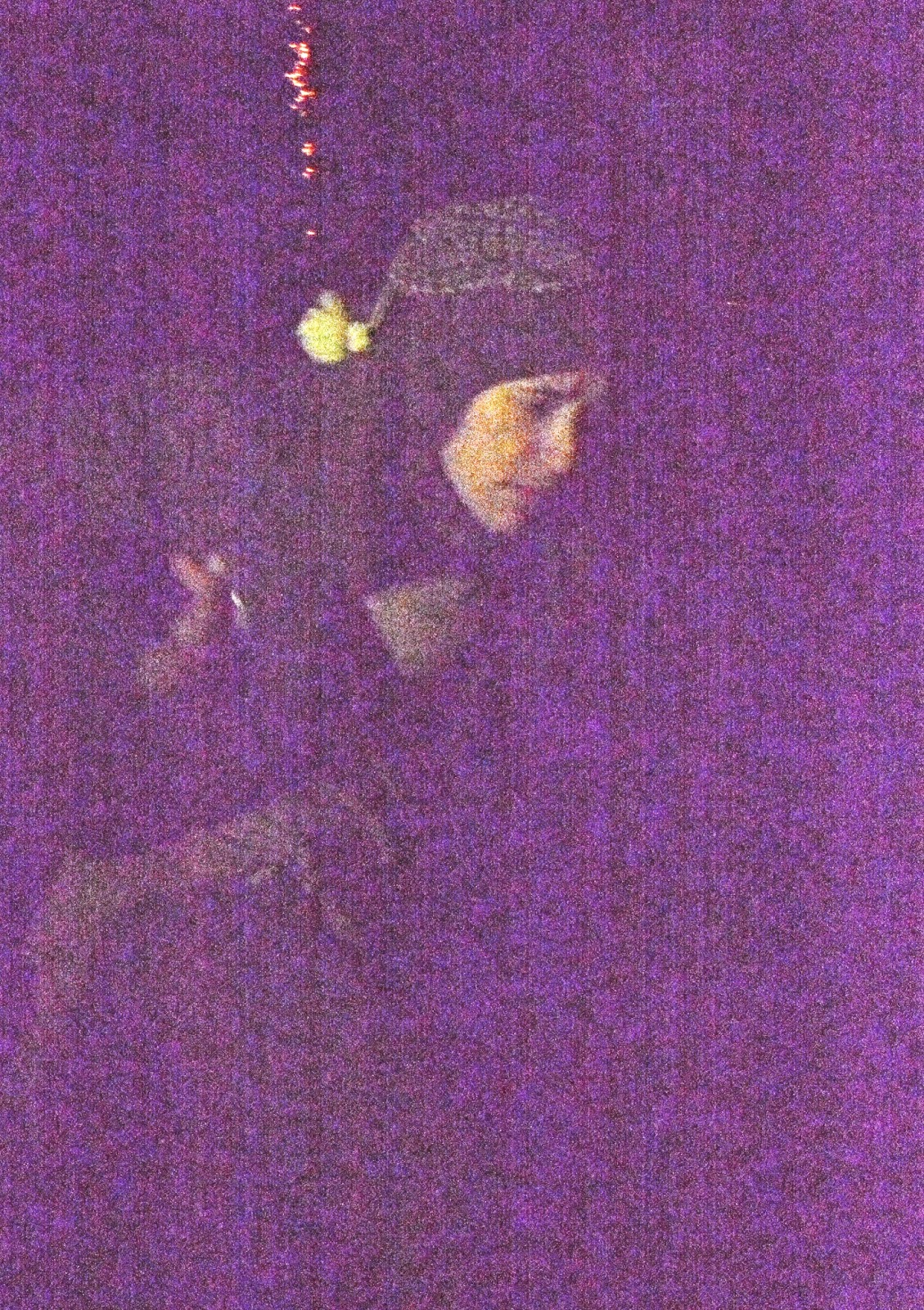 And finally:
I saw this on facebook yesterday.  It came from a page called Sustainable Human.  There are so many stories, tragedies, inspirations and political woes on facebook, that I usually feel overwhelmed after reading the first one or two of my "friends" posts.  That said, these words seem good ones to live by, no matter our age.  The only advice I might add is not to be too hard on oneself in seeking approval.  I think, sometimes, we squelch our own creativity, censoring it before it has a chance to blossom. 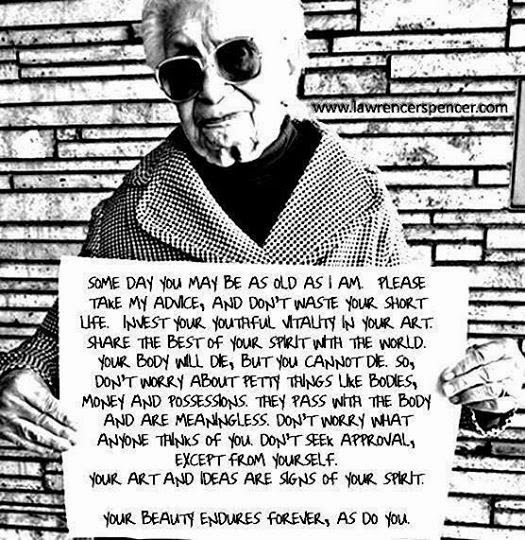 Thanks, as always for reading my blog.  To Eileen (check out that link for more critters), the Fringe actors, and to Bill, my thanks as well.  Each of you gave me a reason this morning to share my life and sort my thoughts.  Maybe that is what life is all about.
Posted by Black Jack's Carol at 3:00 PM