Blues on this Monday

It is Monday morning and a brand new week has come around again.  The perfect time to celebrate the colour blue with Smiling Sally.

Jennifer Harrison, of Harrison Galleries, sometimes does these chalk portrayals with well-known movie references.  They add creativity and humour to our gallery and café visits before we even walk through their door.  I missed taking photos of two others, but caught this one yesterday.  Jennifer makes no claim to be an artist, but I'm impressed. 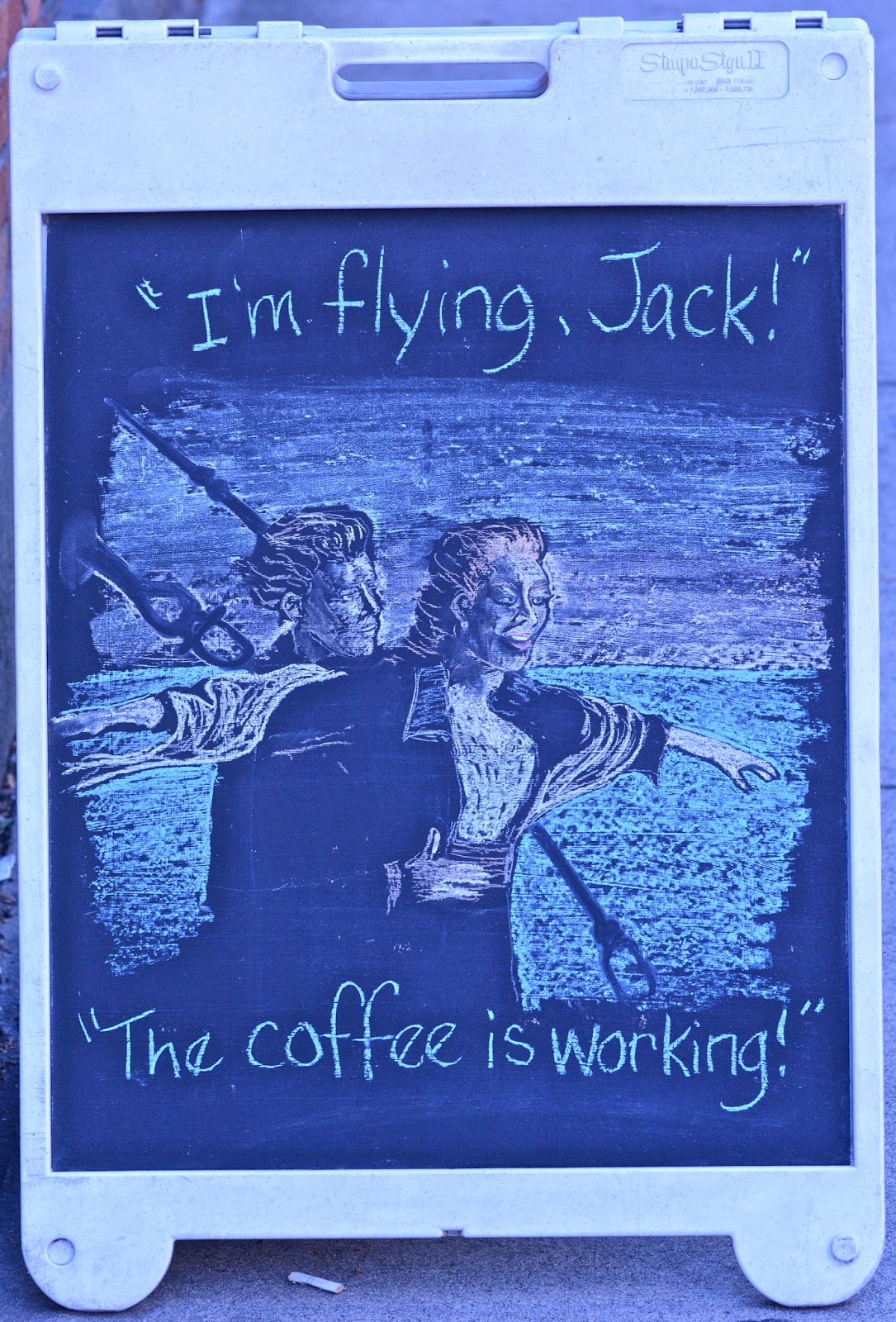 Blue skies and blue accents appear in many works by Stewart Jones.  I took photos of these two in the gallery yesterday. 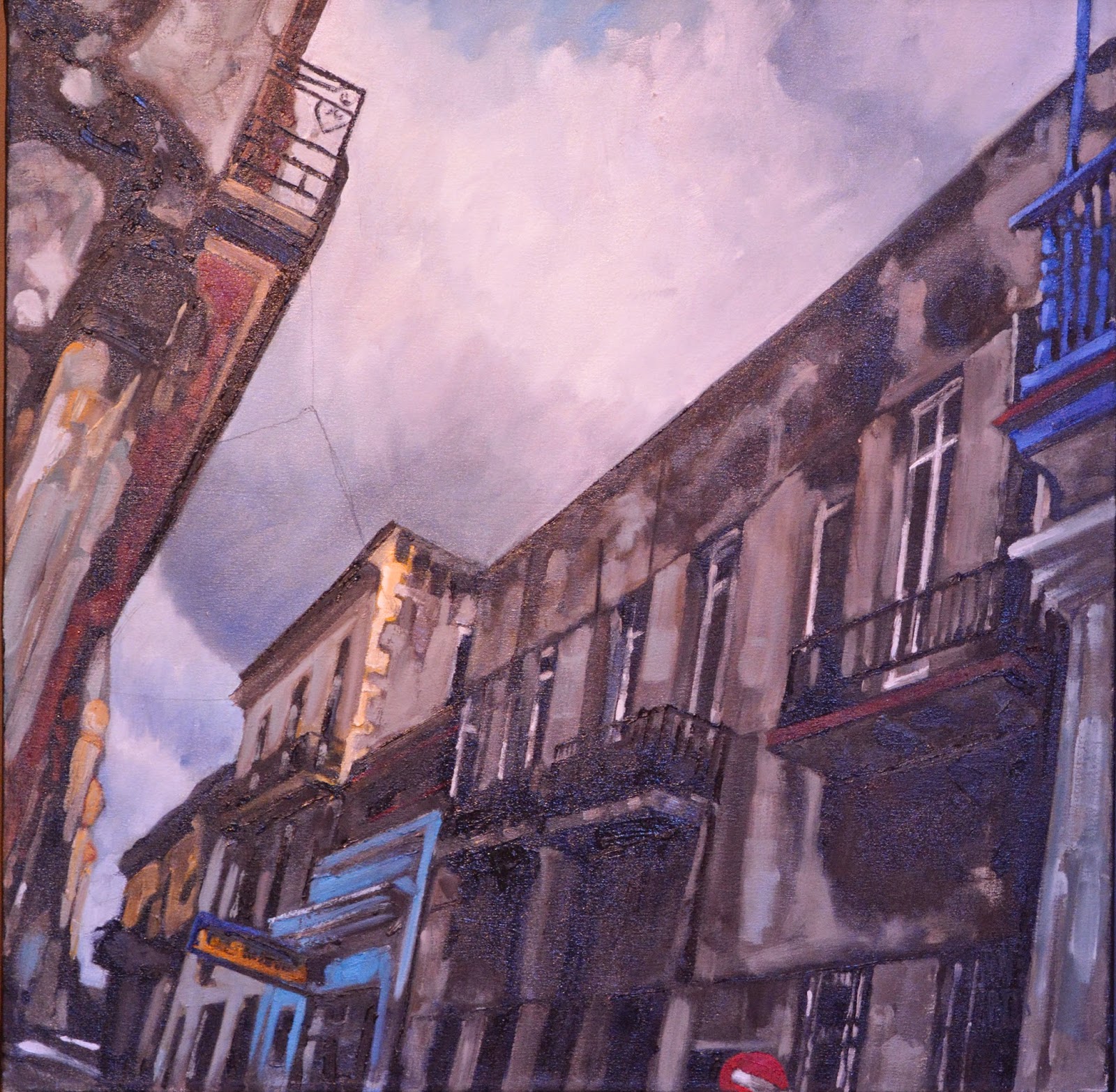 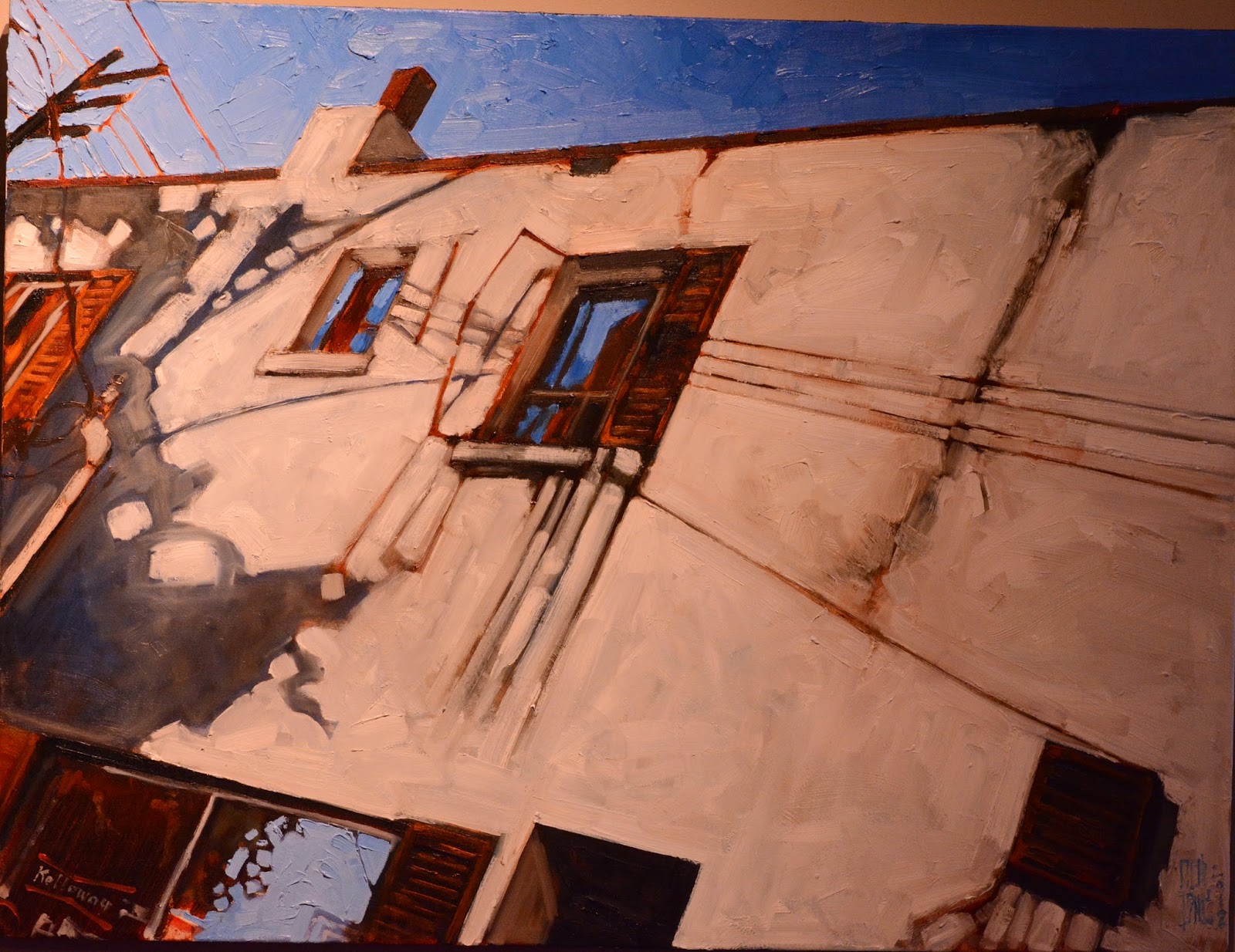 We saw our third Fringe Festival play yesterday.  I quote this Globe and Mail article about The Fringe: "It seems like an idea that never should have flown. Take a bunch of people with plays, monologues and comedy sketches – some of them green as Granny Smiths, others seasoned pros – put their names in a hat, literally, and randomly choose dozens of them to perform at a major festival mainstage over a two-week period, with little to no curation or even time to prepare."

Mural in the courtyard outside The Firehall Arts Centre where we watched the play. 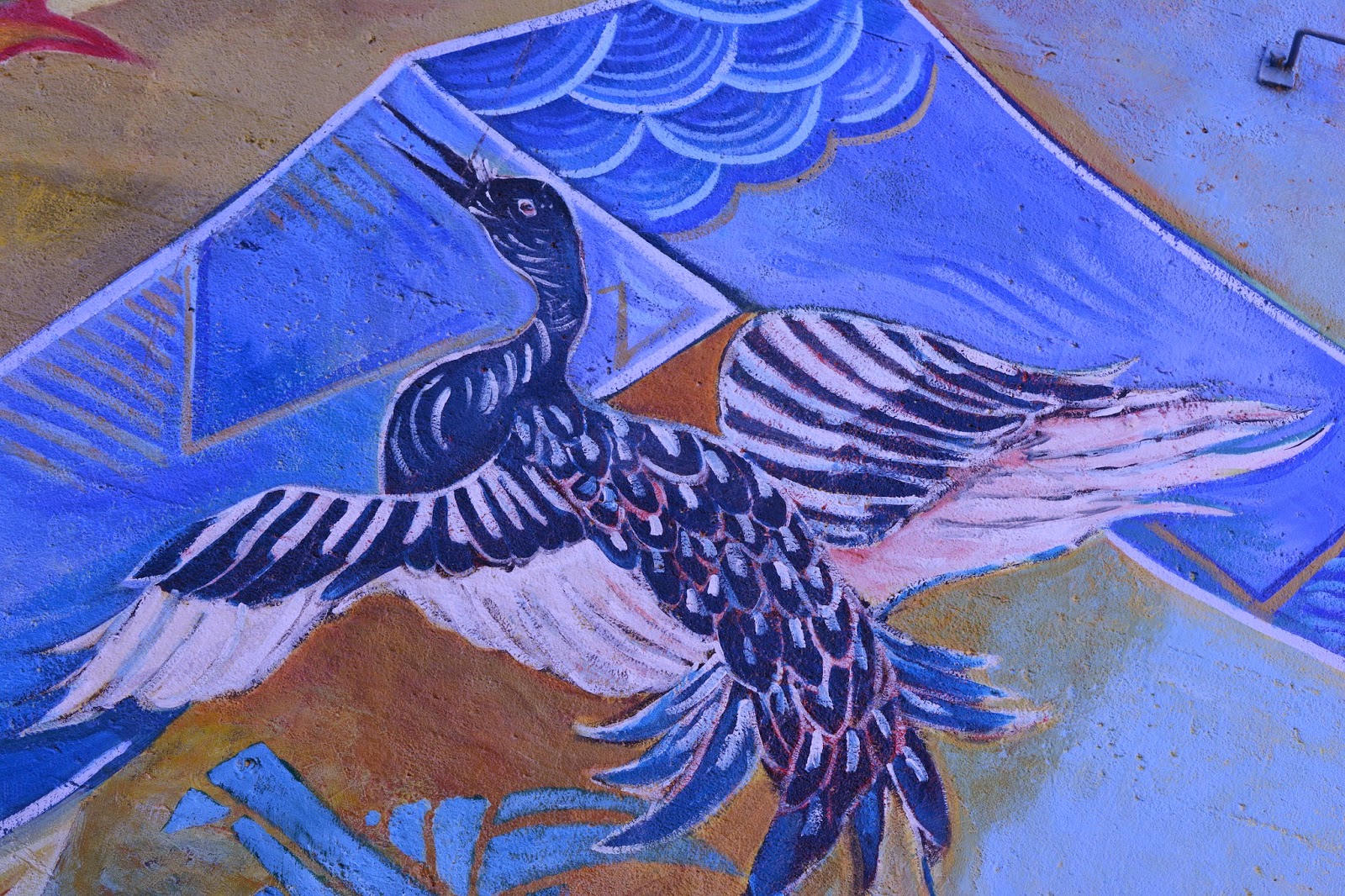 Three plays out of 91 (over 700 performances) is a small representation, but I'm happy we attended those.  Each inspired some laughter, some investigative energy afterwards and a little soul searching as well.

Cropped from photo below. 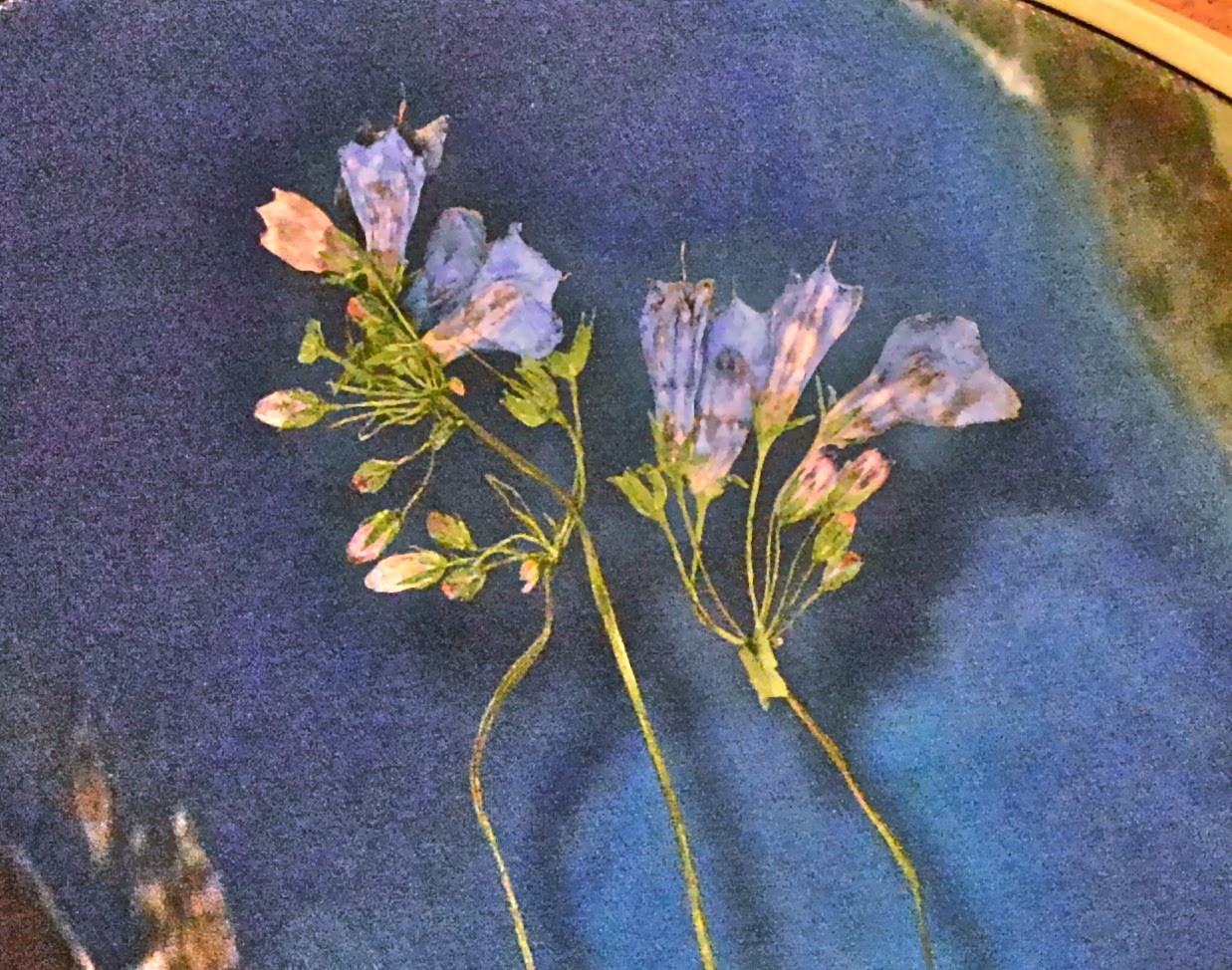 "Blue Flower" by Kiku Hawkes in the theatre lobby. 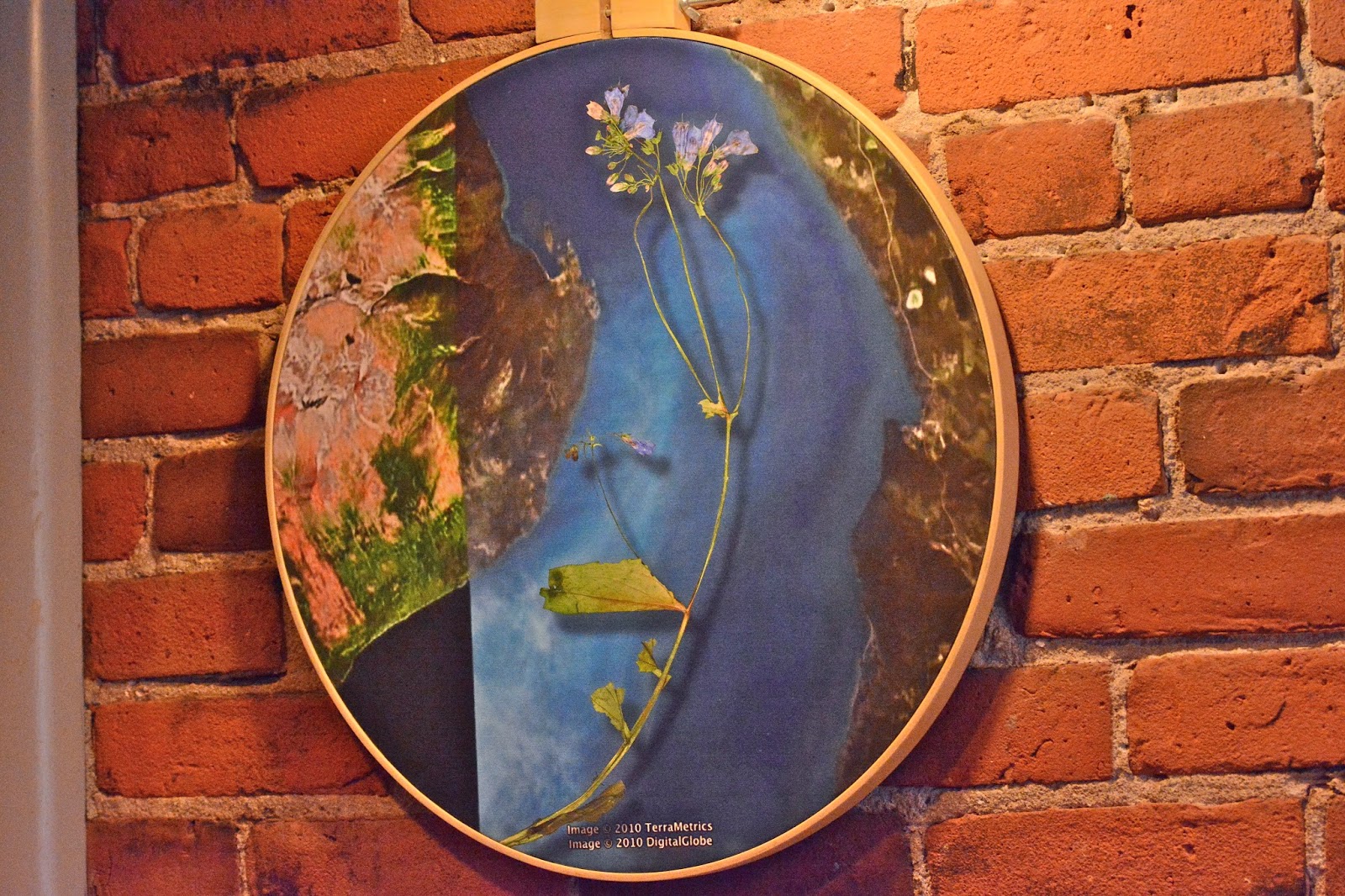 We sat outside in a small patio waiting for the play to begin, and it seemed the time to focus on Bill's blue eyes, often mentioned in my "Blue Monday" posts.  He was brave to allow me such a close-up view and I love this photo for many, many reasons. 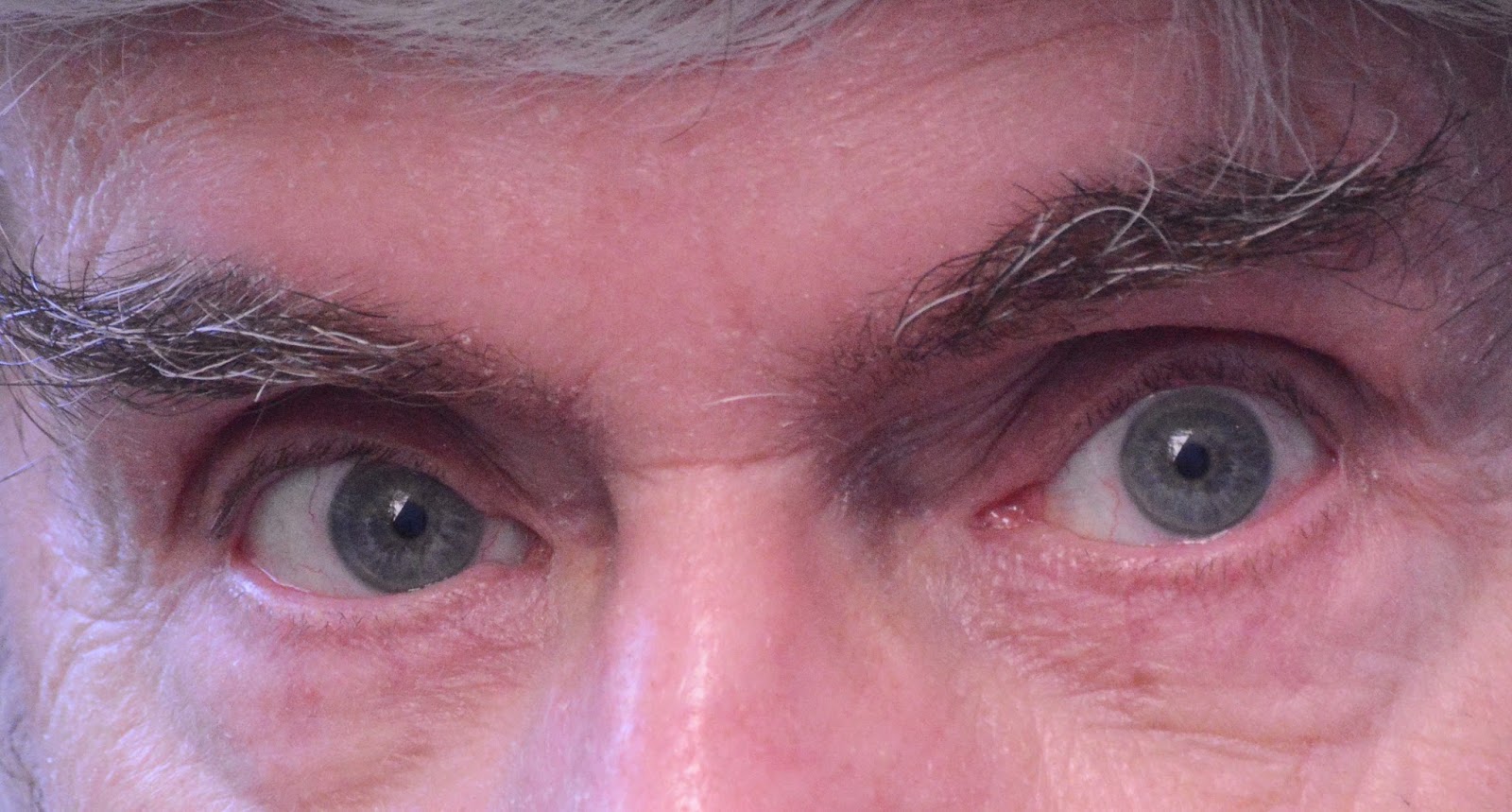 Immediately after the above shot, his humour and his blue helmet found each other.  I think that is his left eye showing through the helmet openings.  He wasn't hiding after all :)  And best of all, you get to see our bike lights.  They aren't blue but they are worth showing because I think they catch drivers' attention better than any others we've tried. 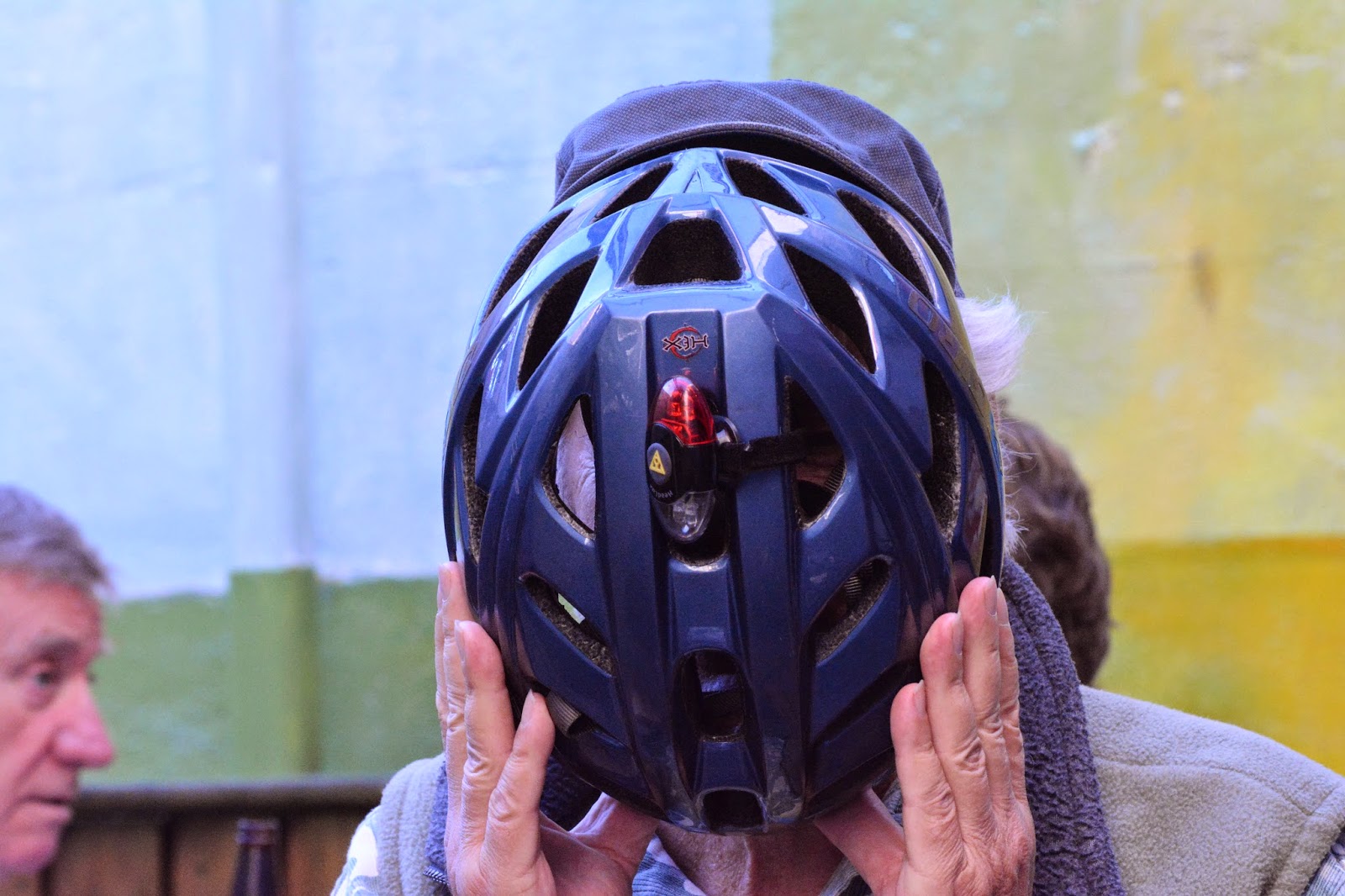 Yesterday's performance of "Poor", written by Suzanne Ristic, directed by her husband, Jay Brazeau, and superbly acted by Lisa Bunting, pushed a lot of buttons.  Honestly, as much as the play was listed as a comedy, most of it didn't feel very funny.  Domestic unhappiness is tragic to me, and the divide between rich and poor never amusing.  Wondering where I fit in that economic picture inspires both guilt and anger.  My laughter was uncomfortable.  I do not know if the graph below was accurate in 1987, when it was used by Louis O. Kelso (1913-1991), co-author of "The Capitalist Manifesto" and director of The Kelso Institute.  There are many such graphs.  The subject of the world's distribution of wealth, as discussed in this Wikipedia  article, is a vast and complex one that mostly leaves my brain spinning.  I made up my mind yesterday to try to do a little better.  I don't know how that will play out.  Certainly, empathy and respect for those who struggle every day to survive, already ingrained in my thinking, grew just a little bit more from watching that play.  I guess that would make it a success in the eyes of those involved in its production. 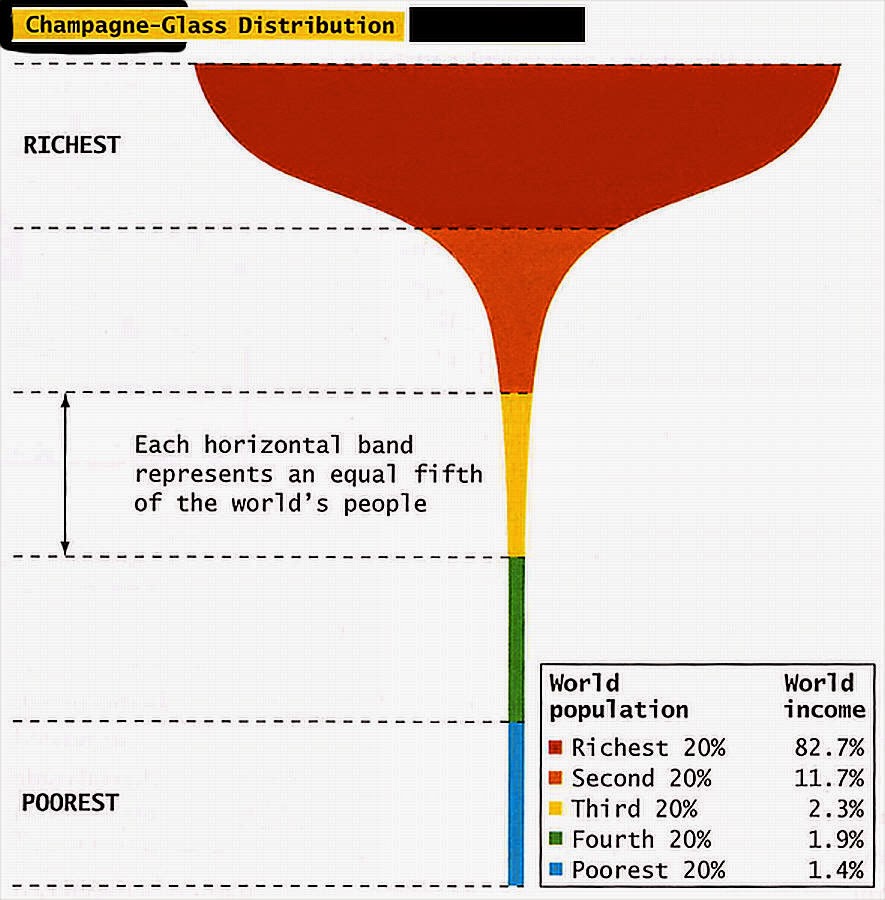 Lisa's performance was faultless.  Perhaps even brilliant.  I've just learned in this article that she has dealt and probably still deals with severe depression.  Her accomplishment was extraordinary in and of itself, but seems even more remarkable with that perspective. 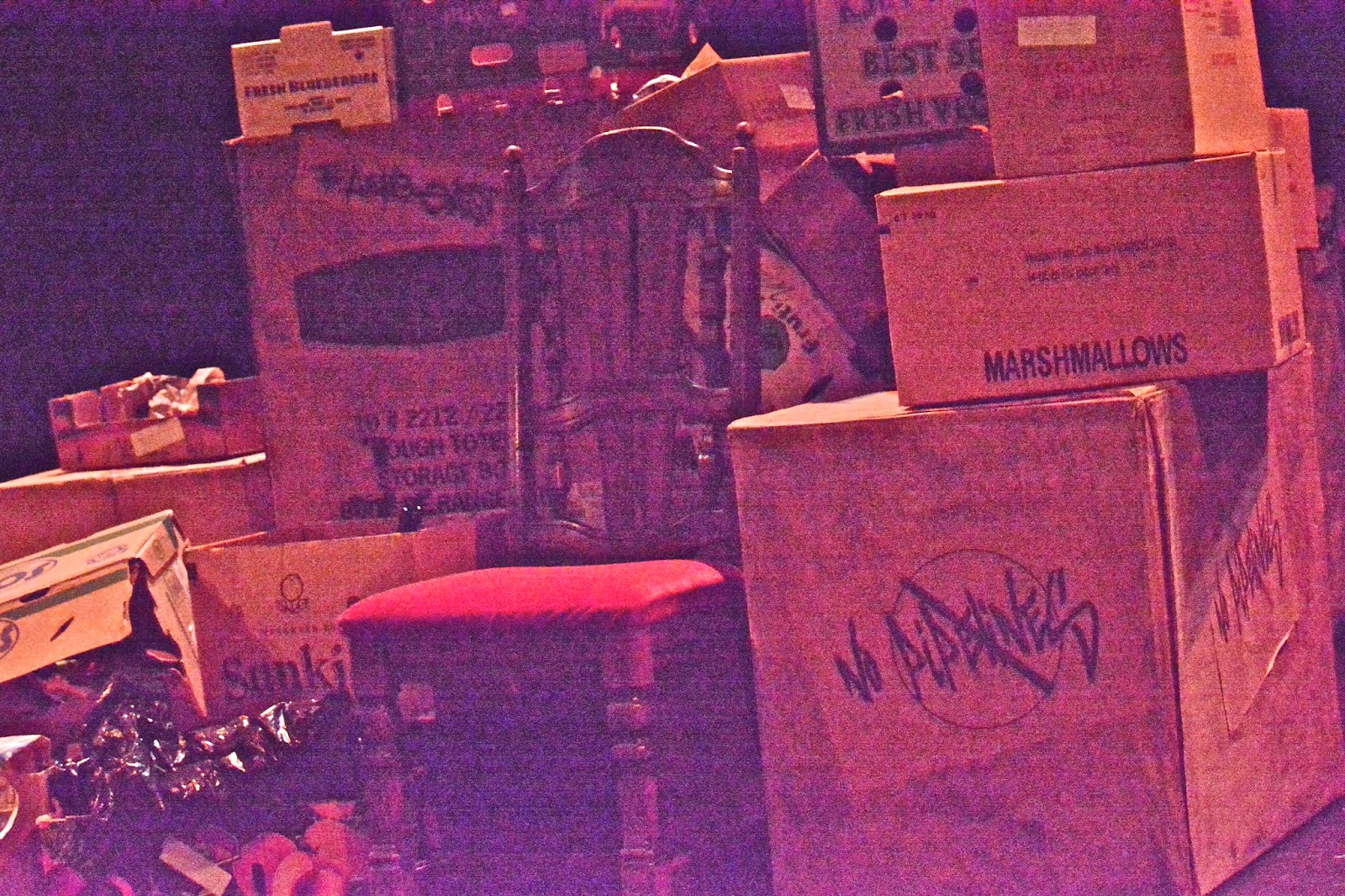 The set may have looked thrown together, but we saw Suzanne with just a couple of helpers after the show, as they loaded each item into small cars.  I thought about the effort involved to do what she loves.  Her performance was a monologue of over an hour in length.  There was not a single stumble that I detected.  The play was performed 8 times in 10 days and I can only guess at the emotional and physical exhaustion she must be feeling this morning after that final performance yesterday. 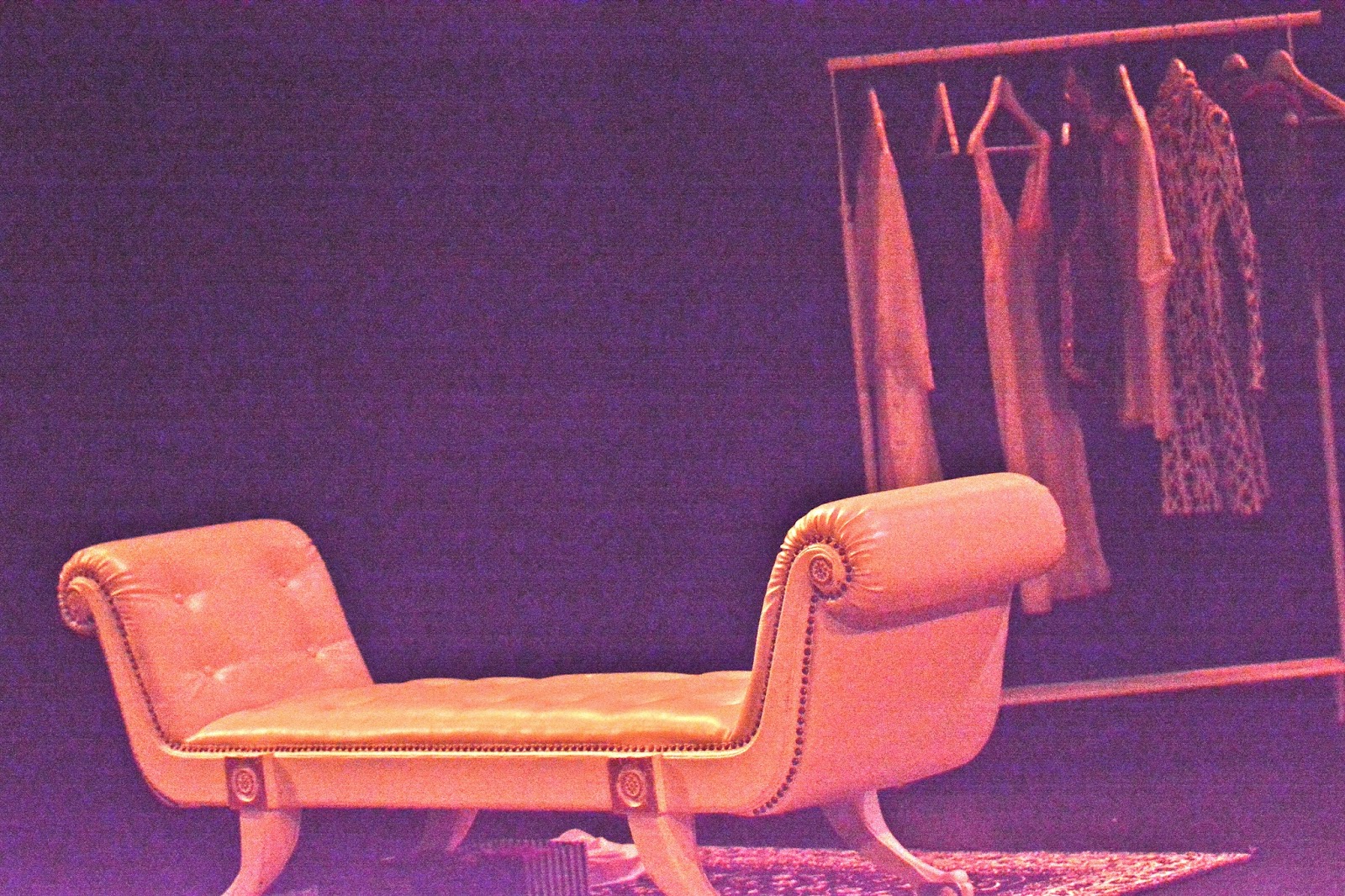 After seeing the play, I focused on another section of the mural in the courtyard, 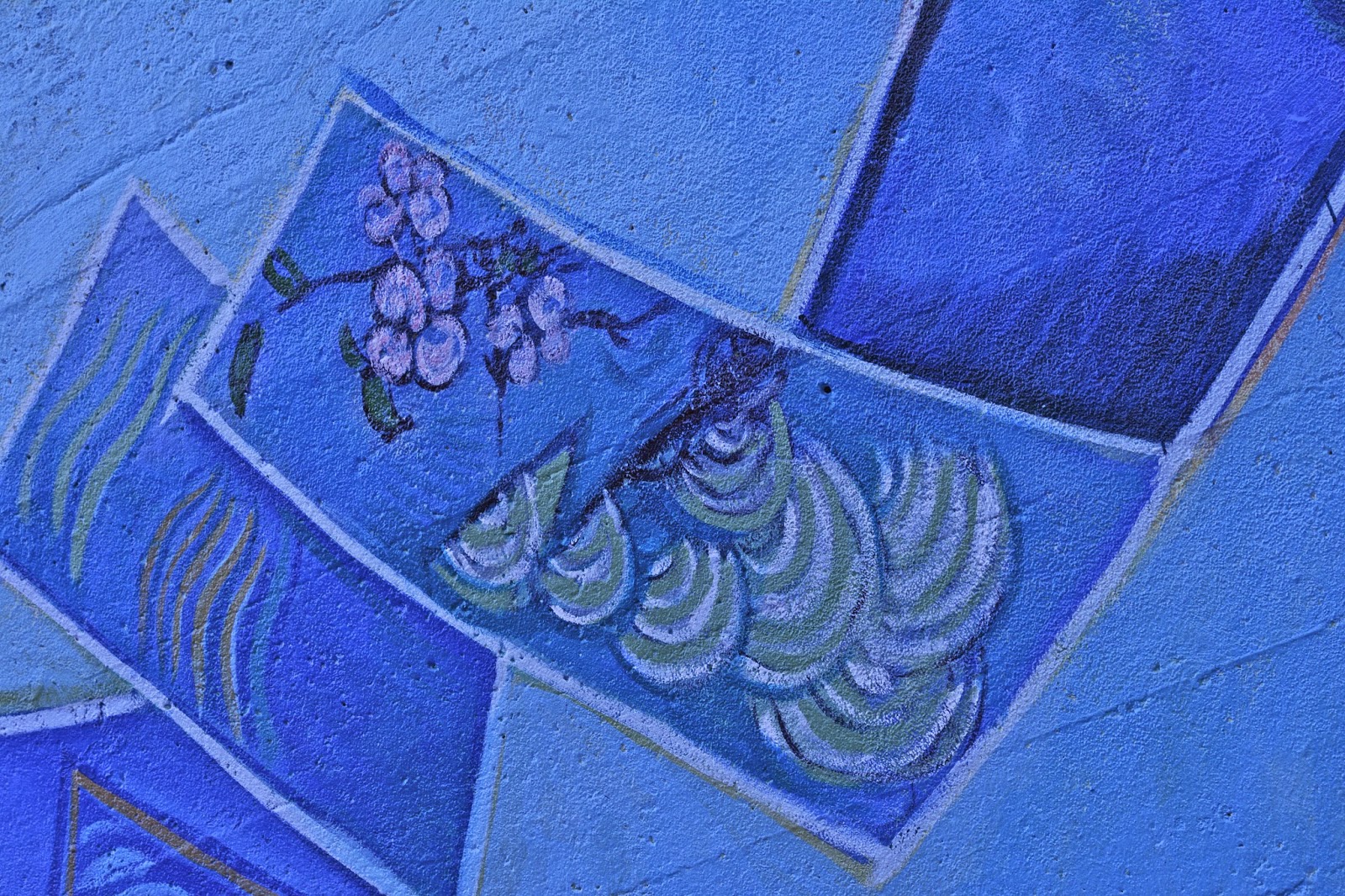 and then we admired the mosaic in the sidewalk outside the theatre. 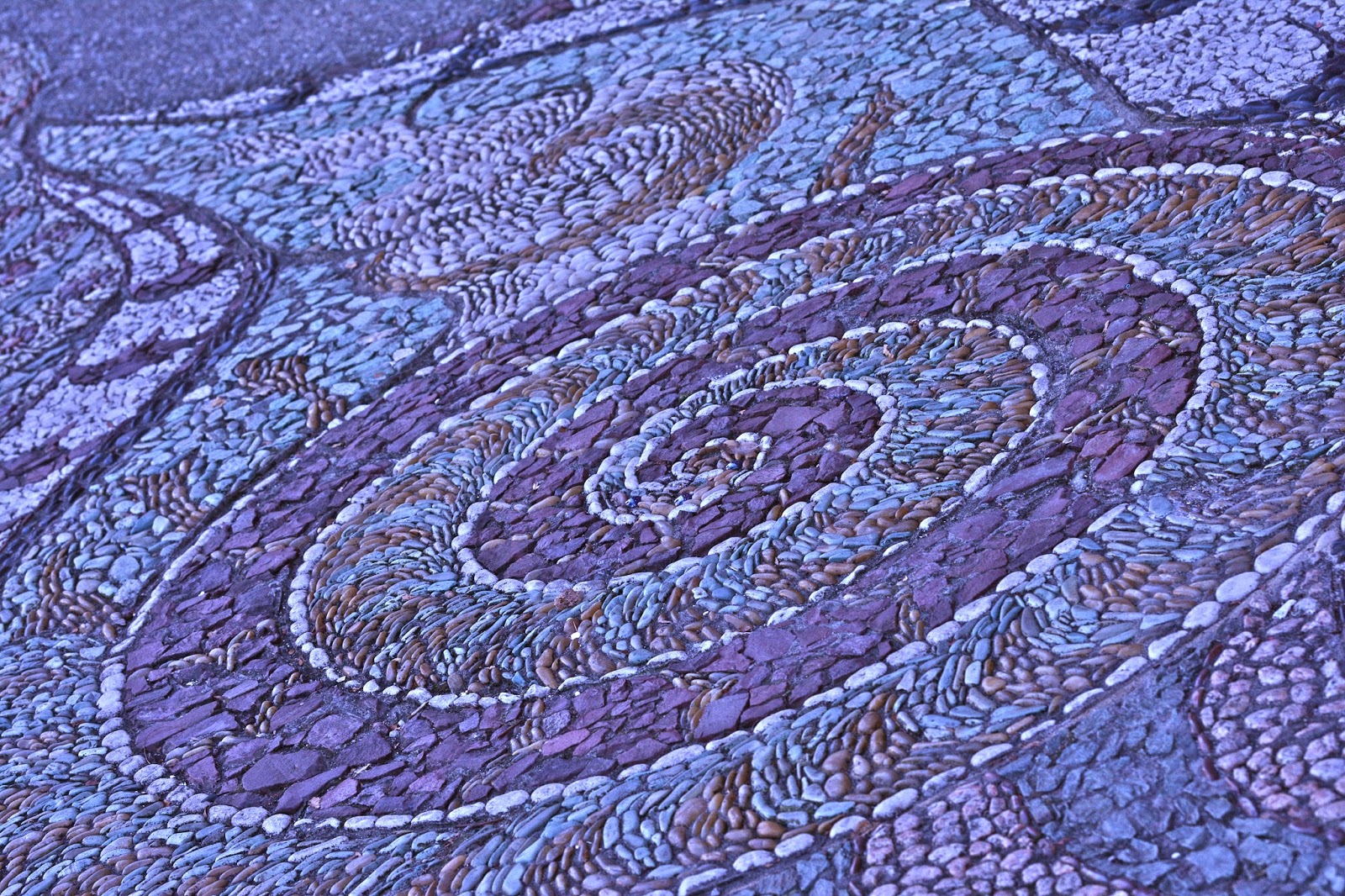 You can read about that project here, initiated by Glen Anderson, and begun in 2005.  I could not find mention, though, of these railway ties that Bill pointed out to me yesterday. 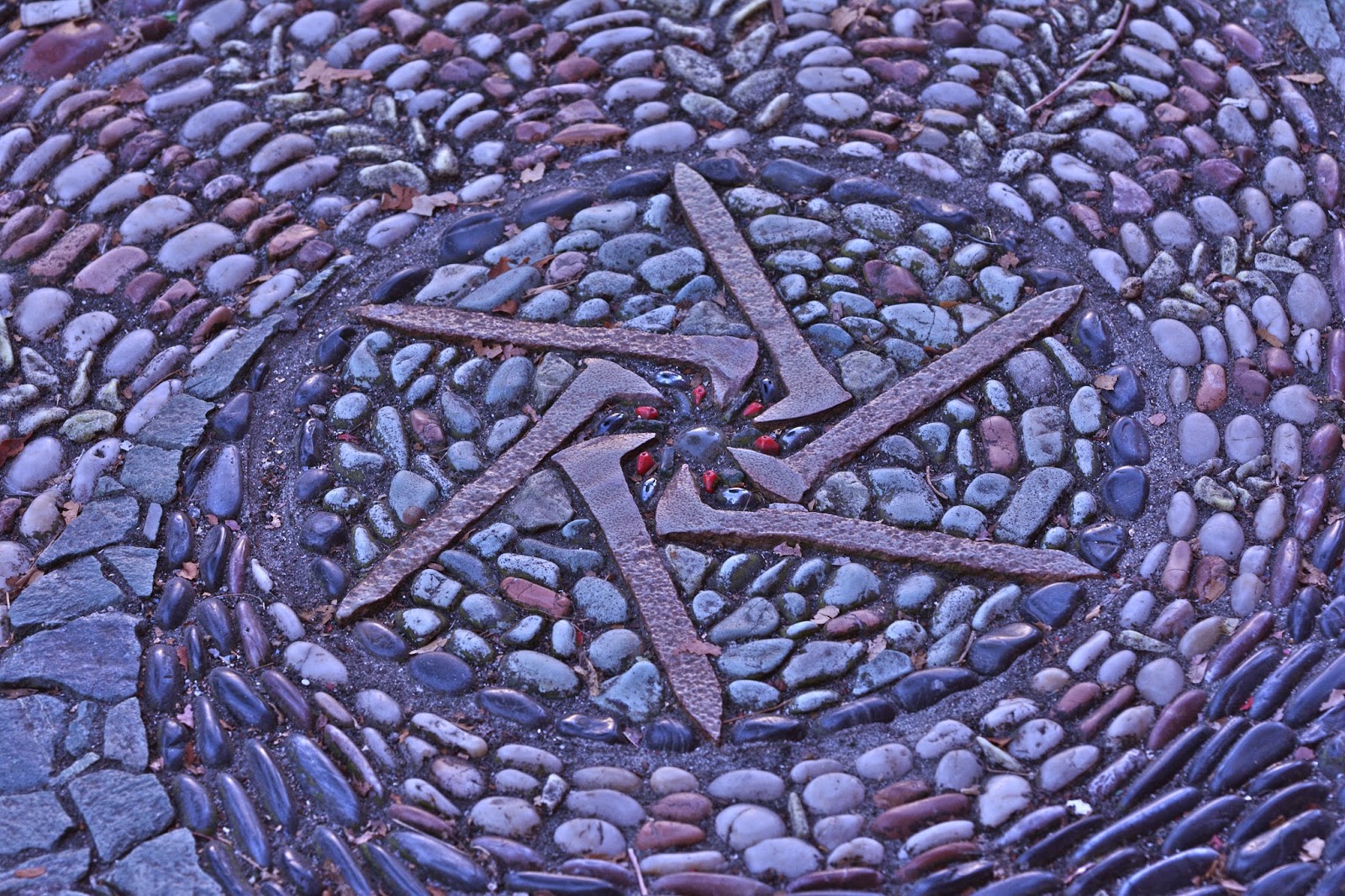 I focused on some of the bluer portions of the art, 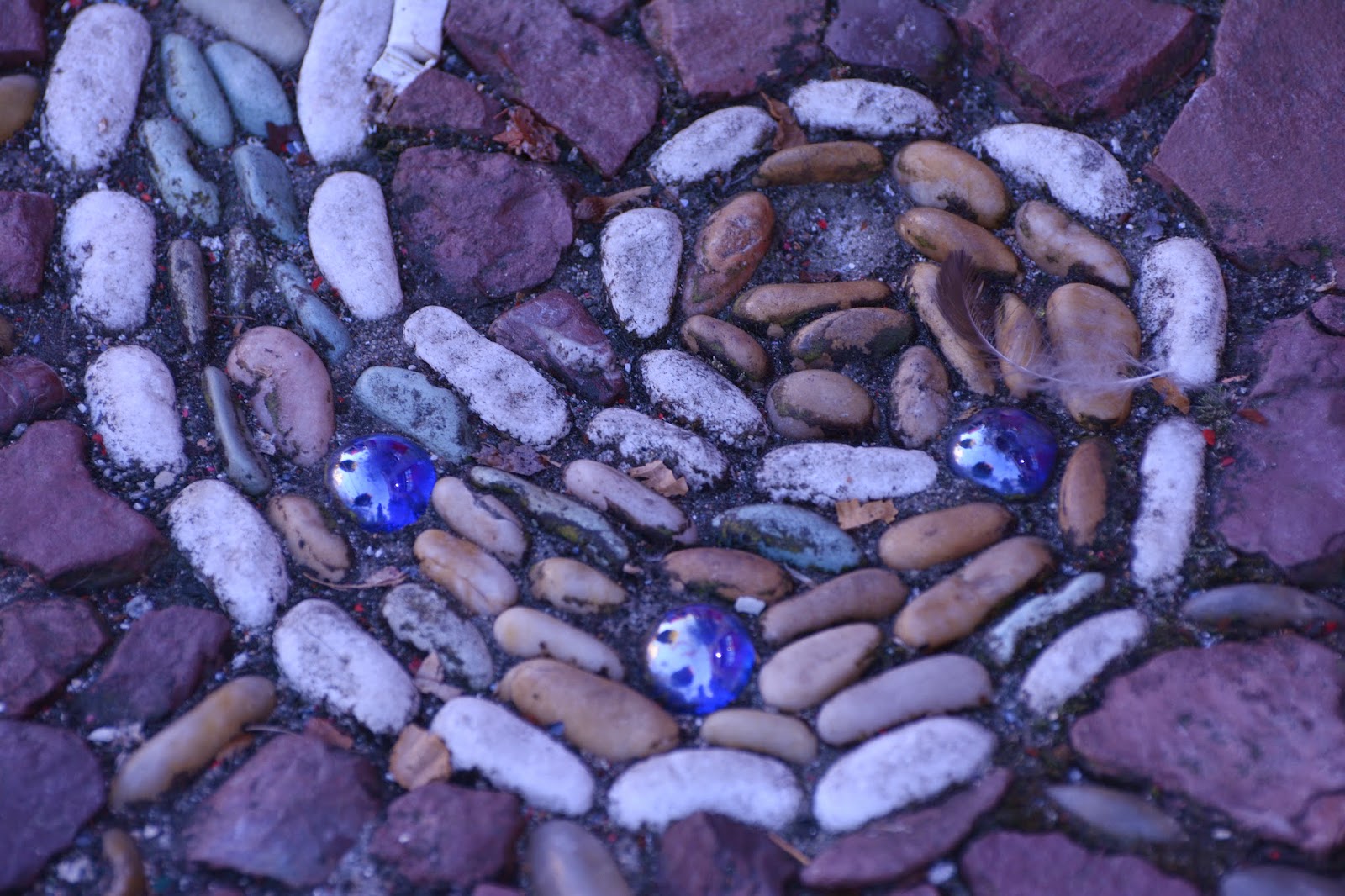 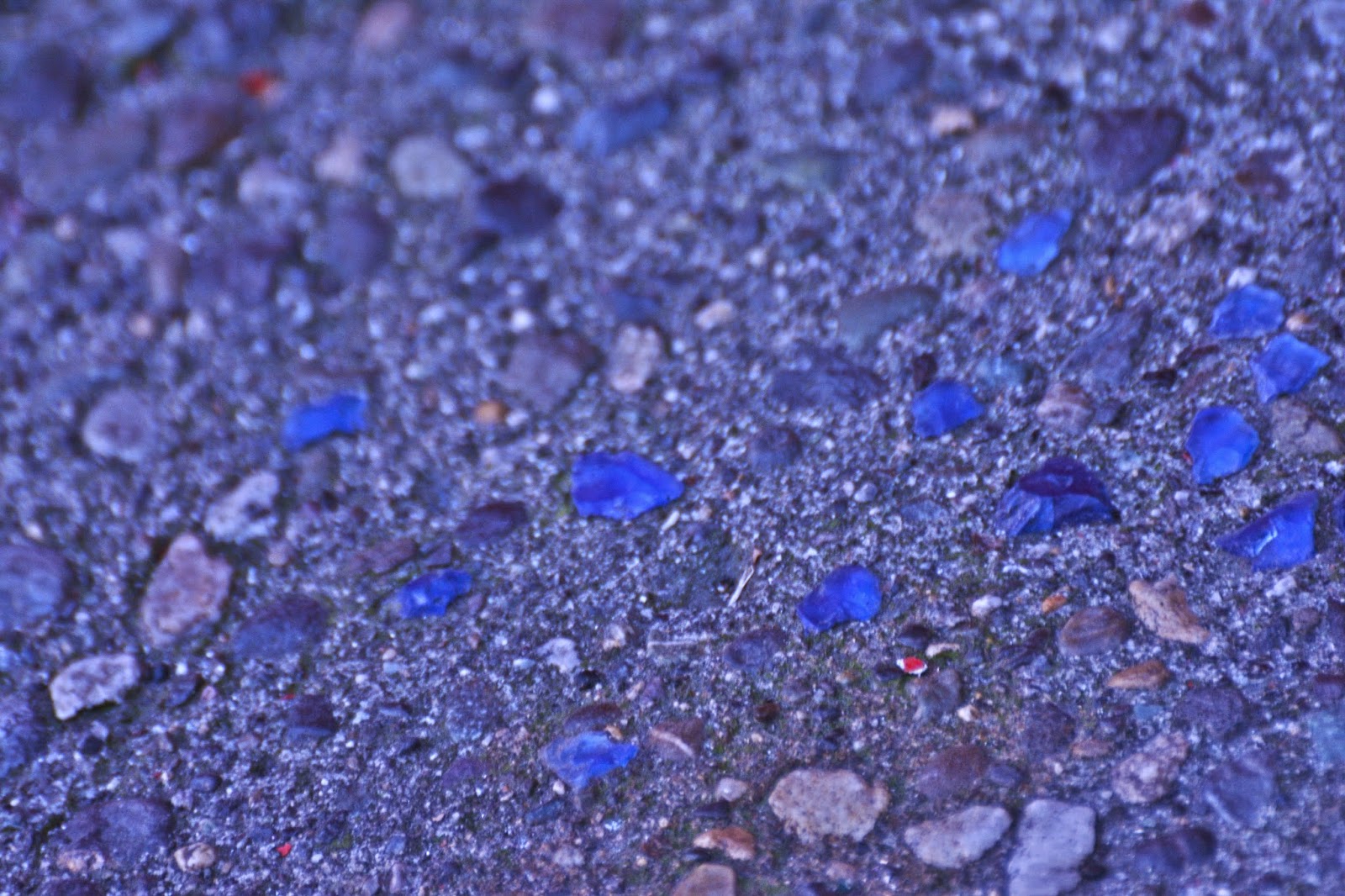 Some of you may object to seeing this image but it feels a must to post.  This church is kitty corner to the theatre. 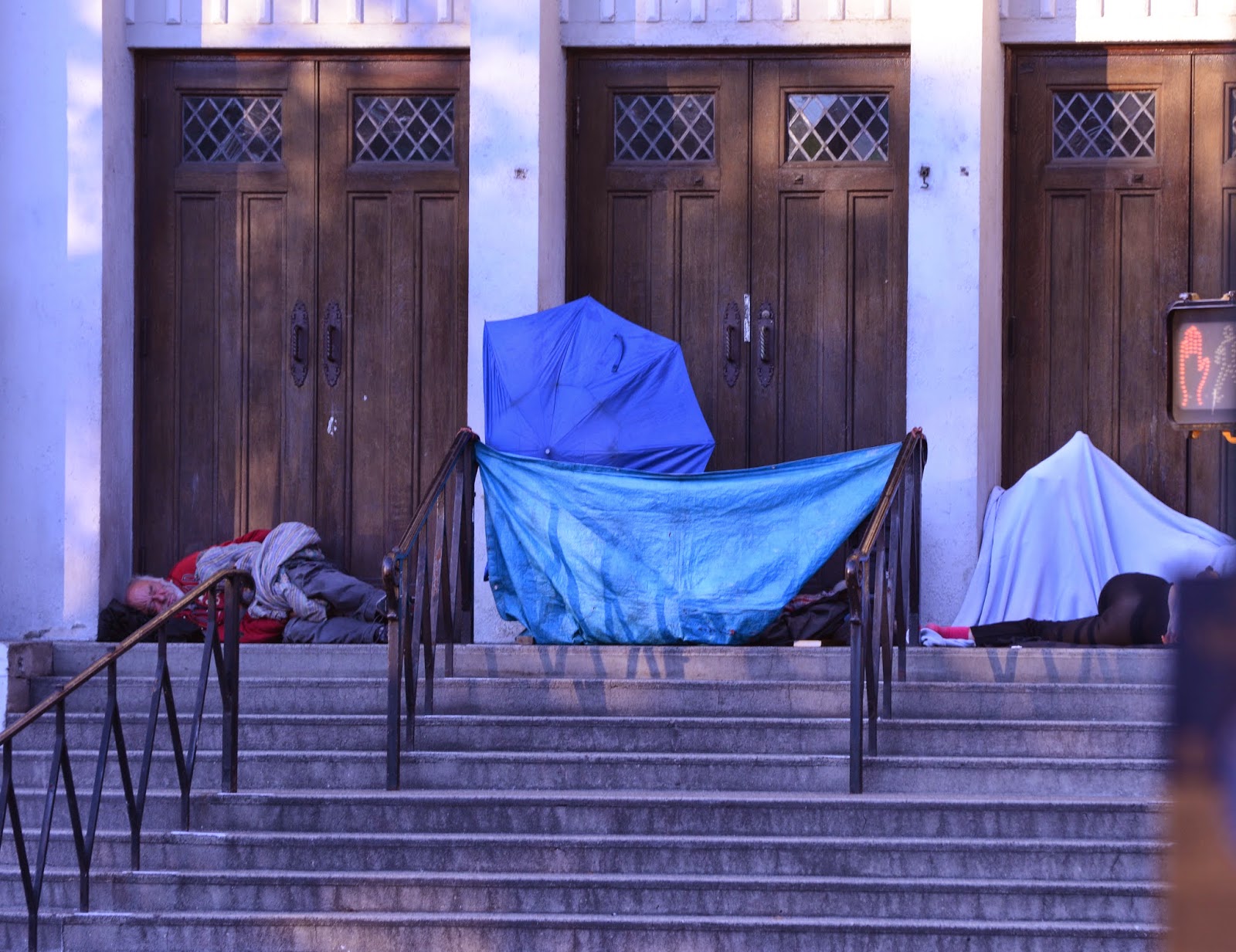 My heart still flip flops this morning,  as it did yesterday, when I looked straight into the reality of the play's issues.  The good news?  The weather was balmy and the church custodians were clearly doing what they could to allow the gentleman (who may even have refused indoor shelter) a place to rest. 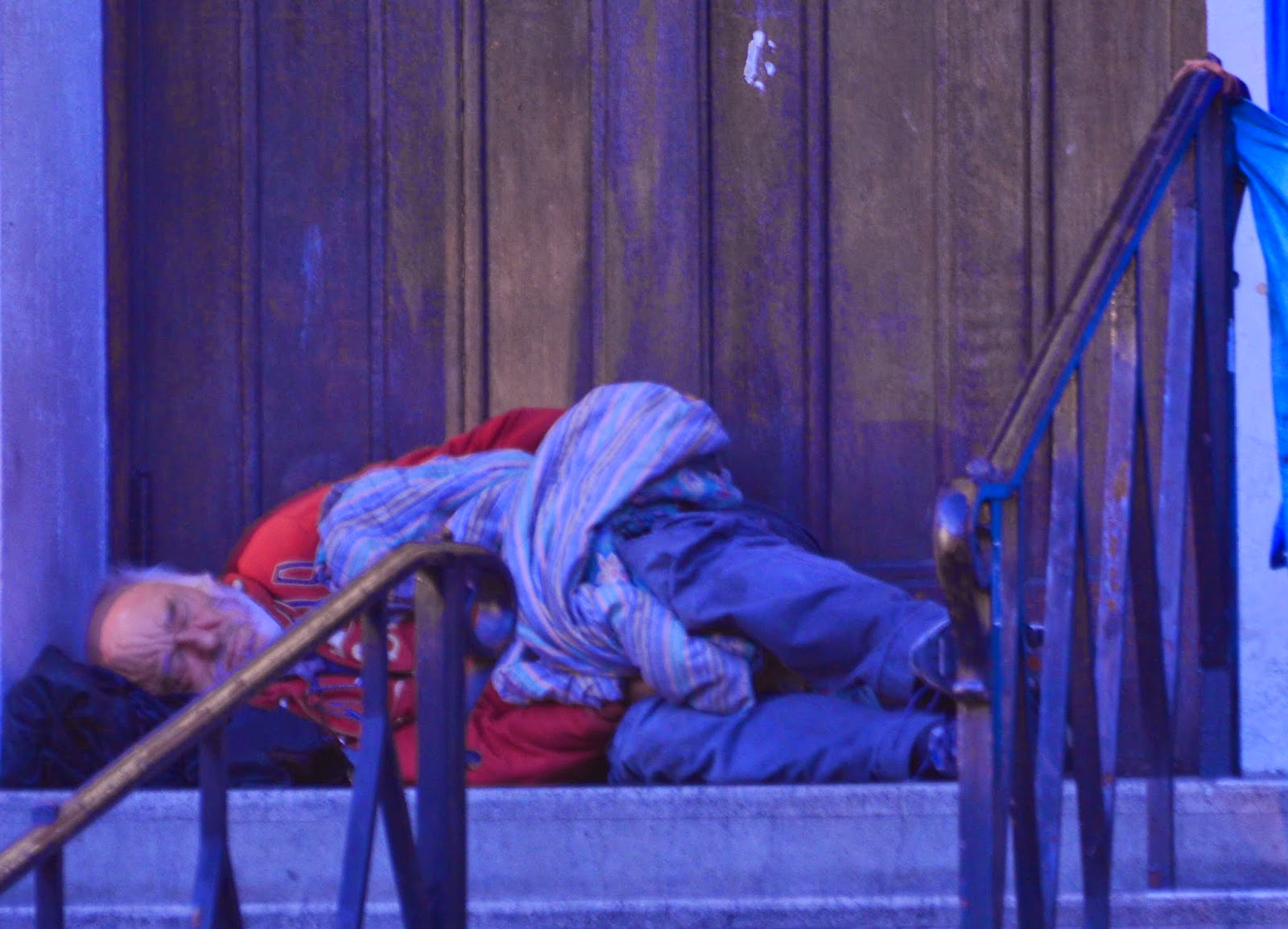 I looked from that same vantage point to the mountains, to the blue skies, to the ever present cranes, and then back at.. 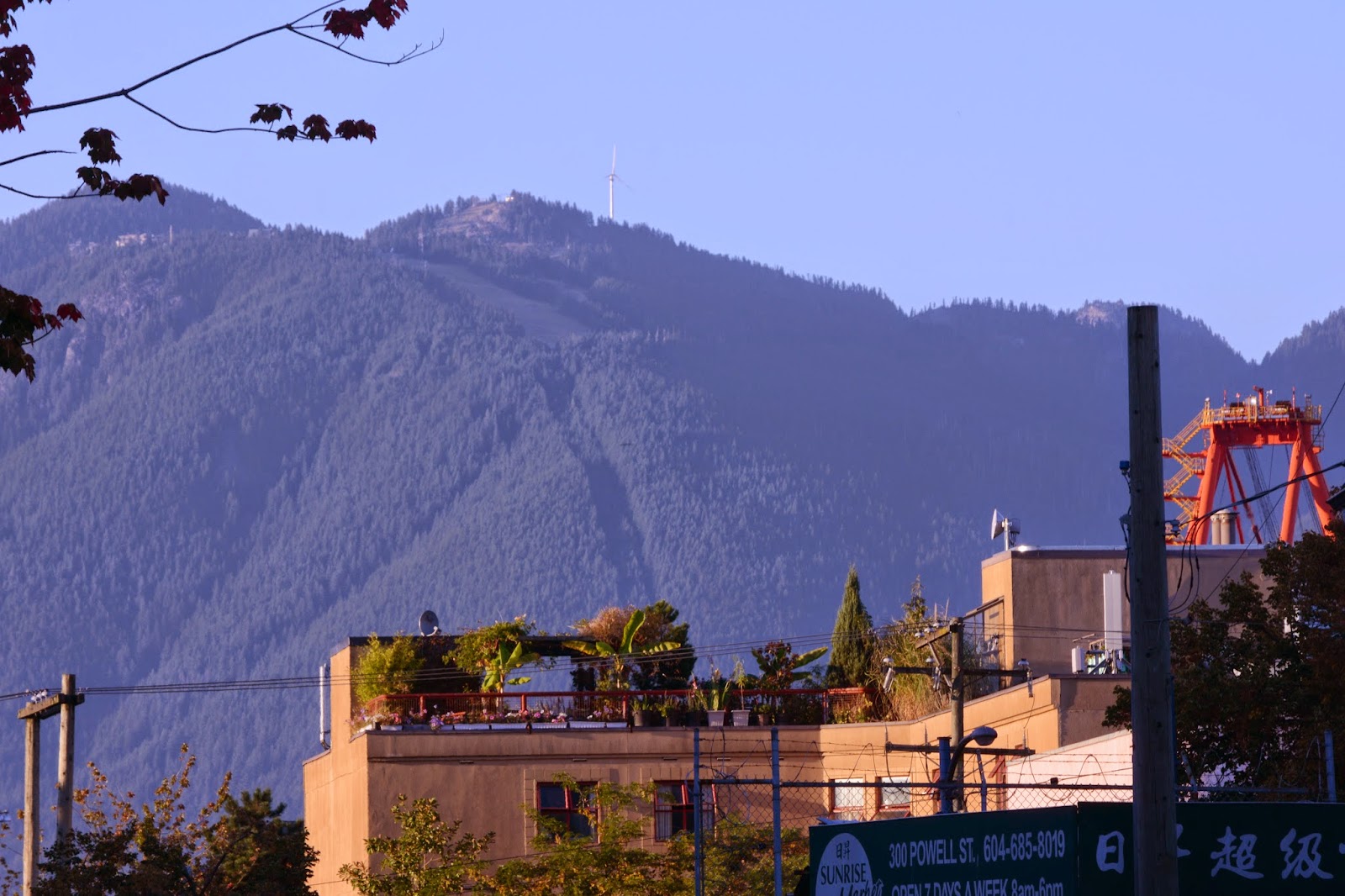 the Firehall sign, one that has become a favourite. 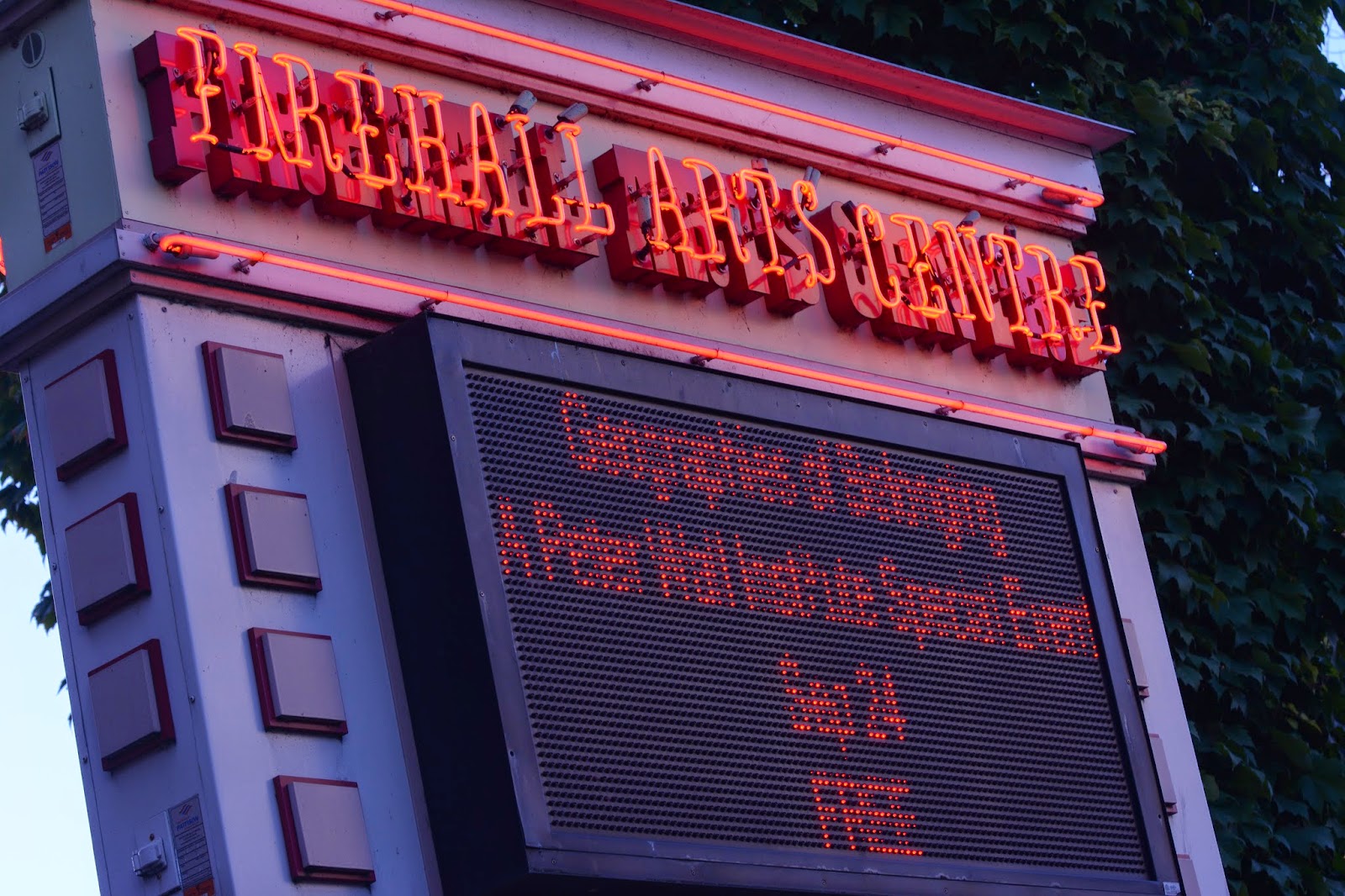 Vancouver's signs of Autumn are gentler than in most other regions of Canada.  This tree was a stand-out. 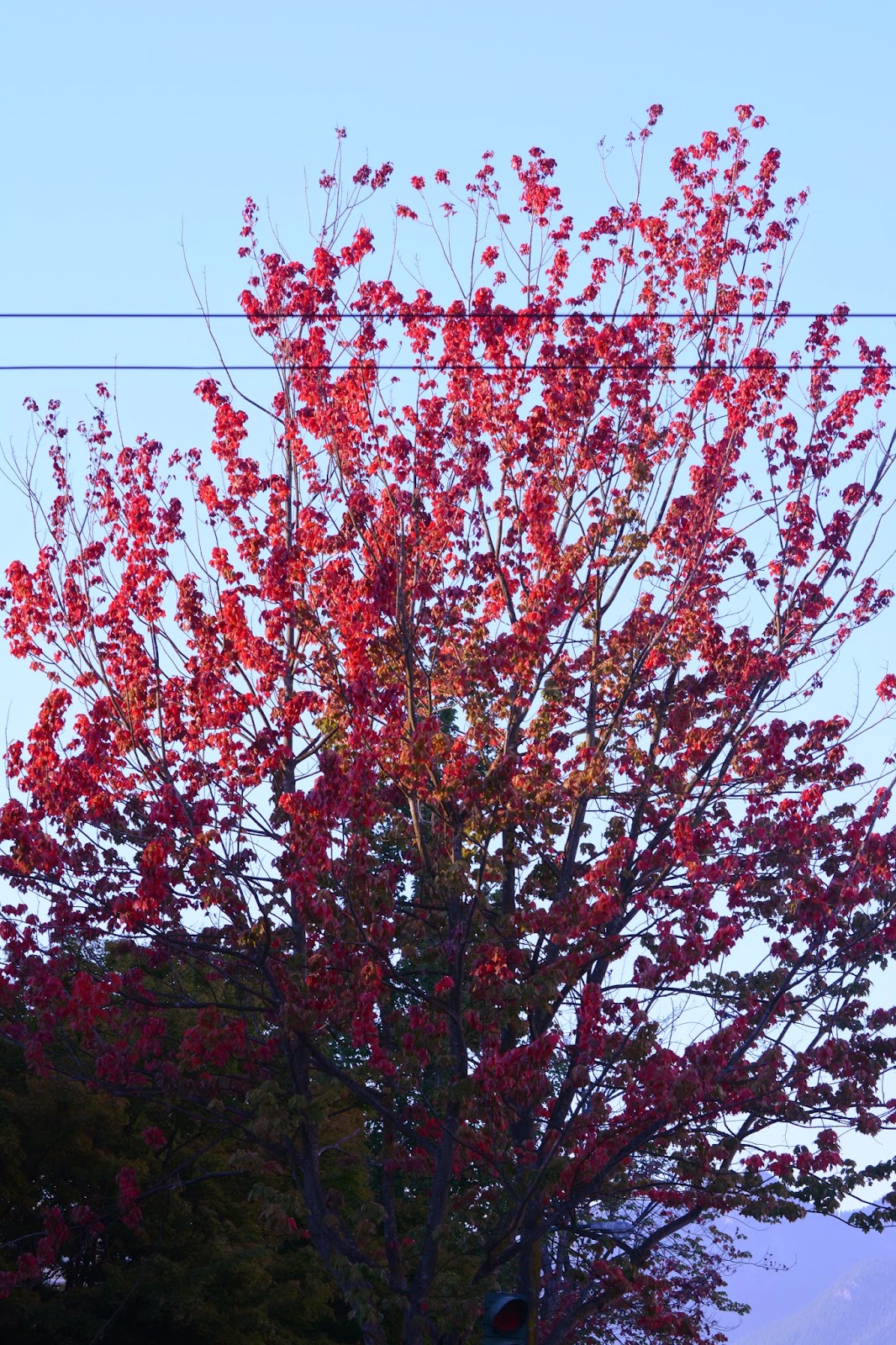 Portions of the Lao Tsu mural, designed by Kenson Seto, and painted by Alex Li & Falk, 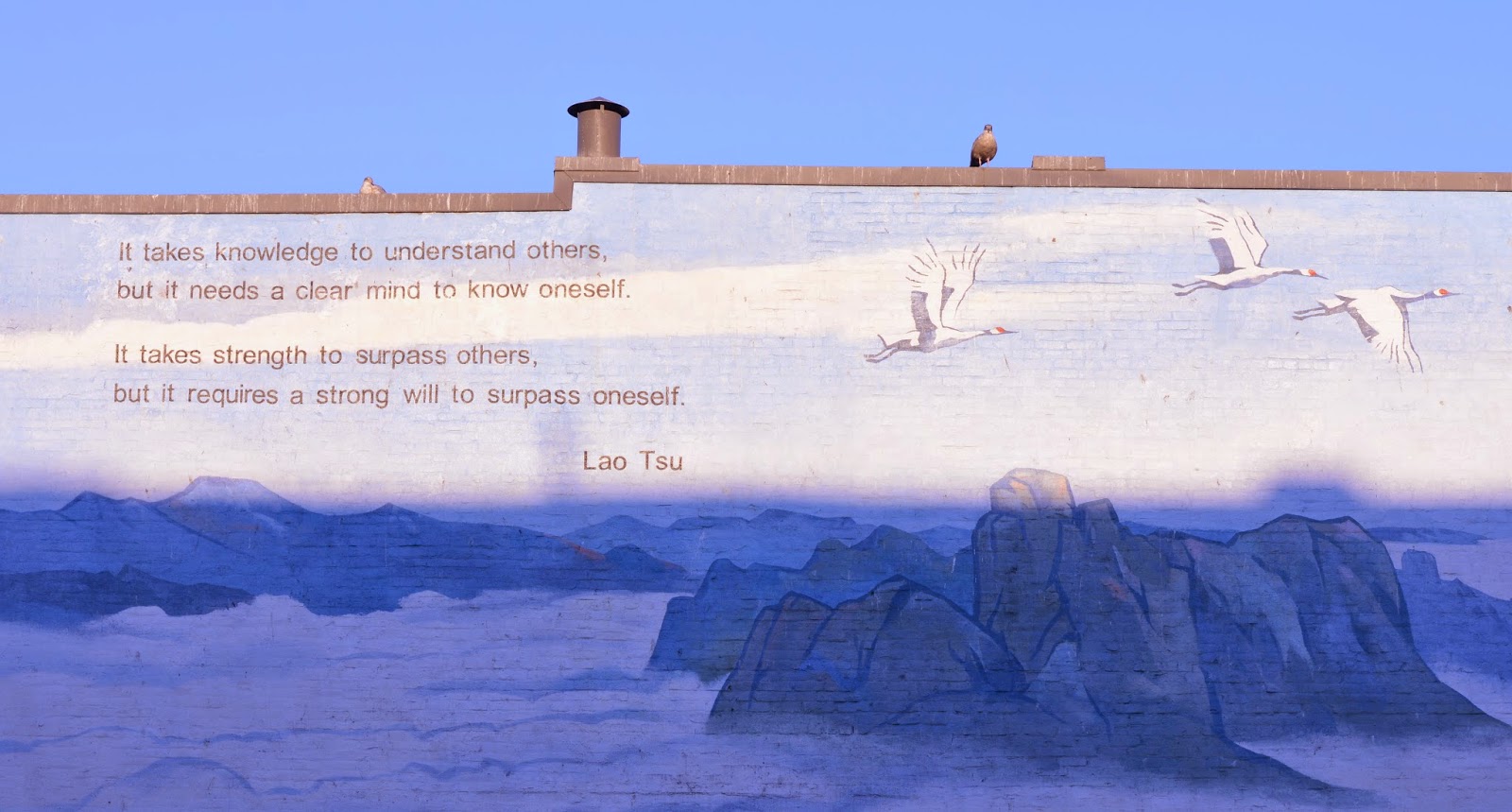 were my final blue contributions for Smiling Sally's Blue Monday meme.  Many thanks to her for hosting, to you for stopping by, and to Bill for stretching his boundaries right along with me yesterday.  Happy Monday to each one of you! 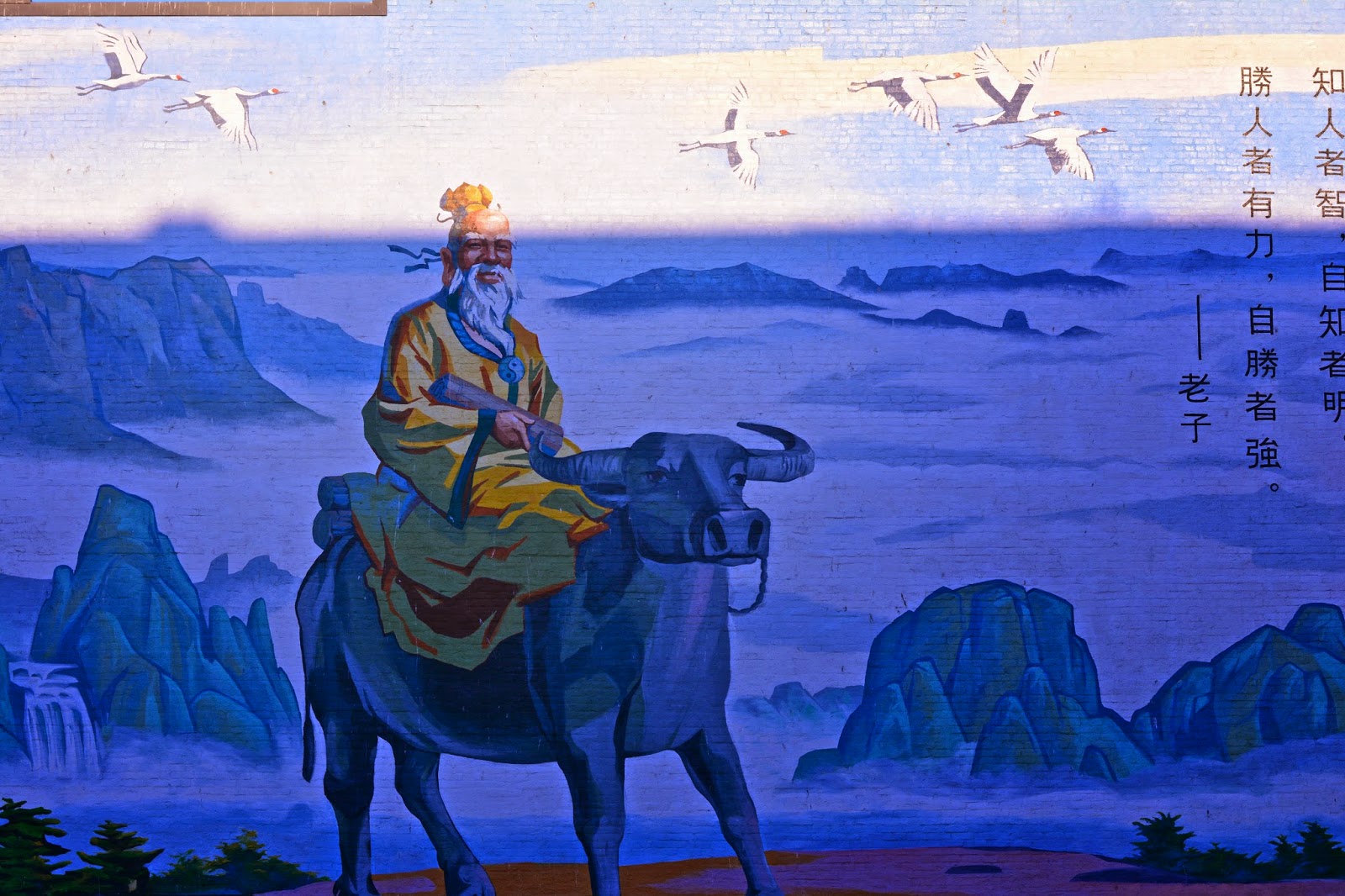