I've made it to the letter "S" for ABC Wednesday (one day late), the most consistent I've been after posting sporadically to Mrs. Nesbitt's super-stimulating meme for several years now.  Many thanks to her and her steadfast volunteers who have given it such sedulous support.

Lots of music for you this morning, but if time is of the essence, skip ahead to the stuff of our daily comings and goings just past the videos.

Here are several versions of  Schubert's Serenade (Ständchen) from the Swan Song (Schwanengesang) collection.  It is a melody that soothes and brings serenity to many.  He wrote it in the last year of his very short life.

You can listen to Christoph Berner singing it at this link.  If you would enjoy forest footage that includes birdsong, this video with Dietrich Fischer-Dieskau's voice and the lyrics in the sub-titles is sublime.

Liszt's piano arrangement of it is played by Horowitz below.  At the 1:00 minute mark, there is a photograph of his standard poodle leaning on his forearm as he plays.

This version for string orchestra has sybaritic stimulation throughout the video.
My second choice of "S" related music is very, very different, so prepare for a shock to your senses and perhaps turn your volume down to start.  This is the Hua Family Shawm (the double-reed instrument that preceded the oboe) band.  If you listen to it, I hope you will hang in until at least the 30-second mark  as the style changes dramatically at that point.


We walked to Harrison Galleries yesterday.  I gave my newly repaired small lens one more chance, but it worked for only a few shots and then went into hunt-and-peck mode.  Back to the shop it goes.  The sky was cold and grey as we started out in David Lam Park but watching Bill and Black Jack make their way across the lawn kept me smiling. 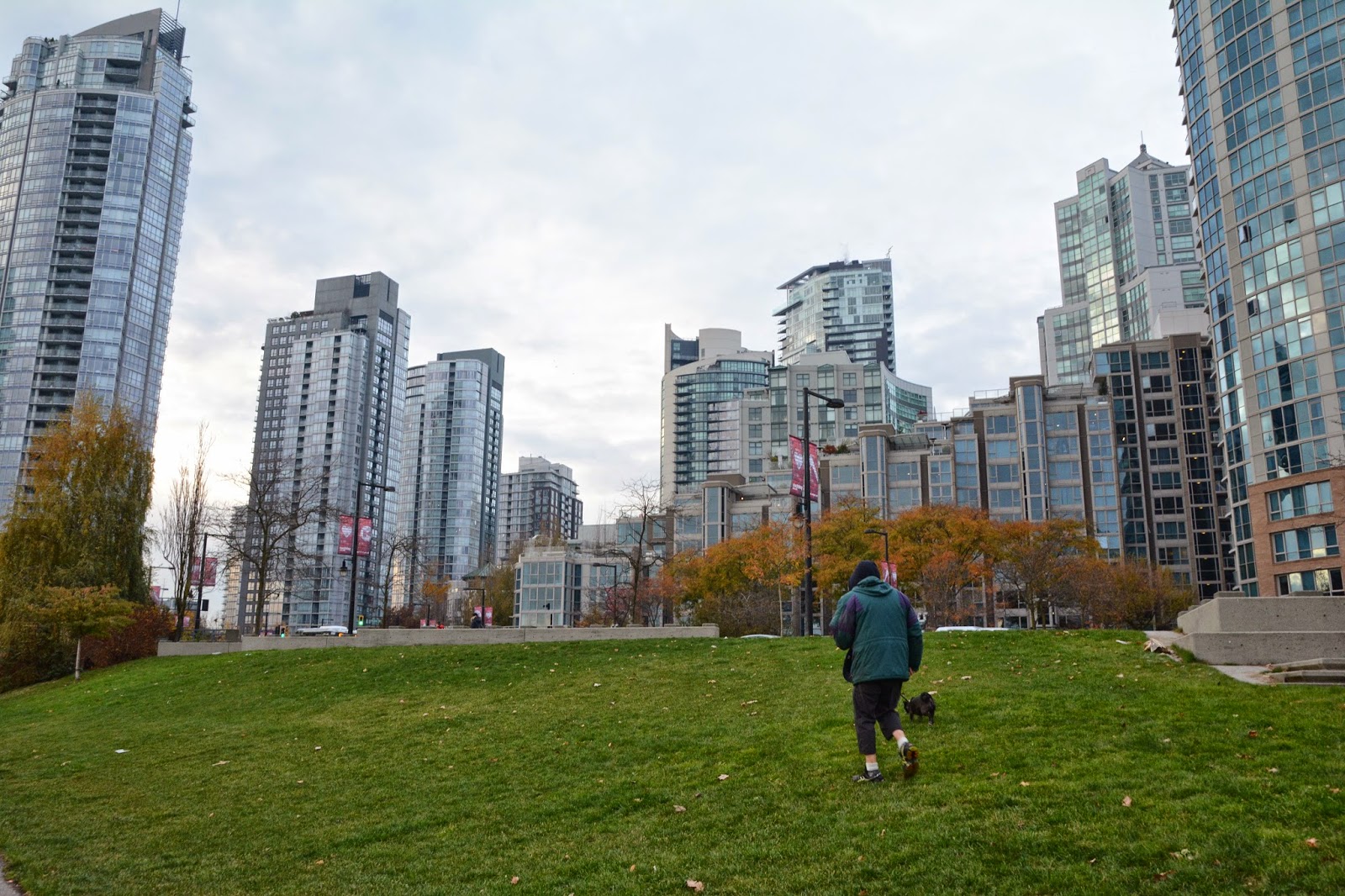 Surprisingly, there was more colour in the surroundings than I had anticipated.. 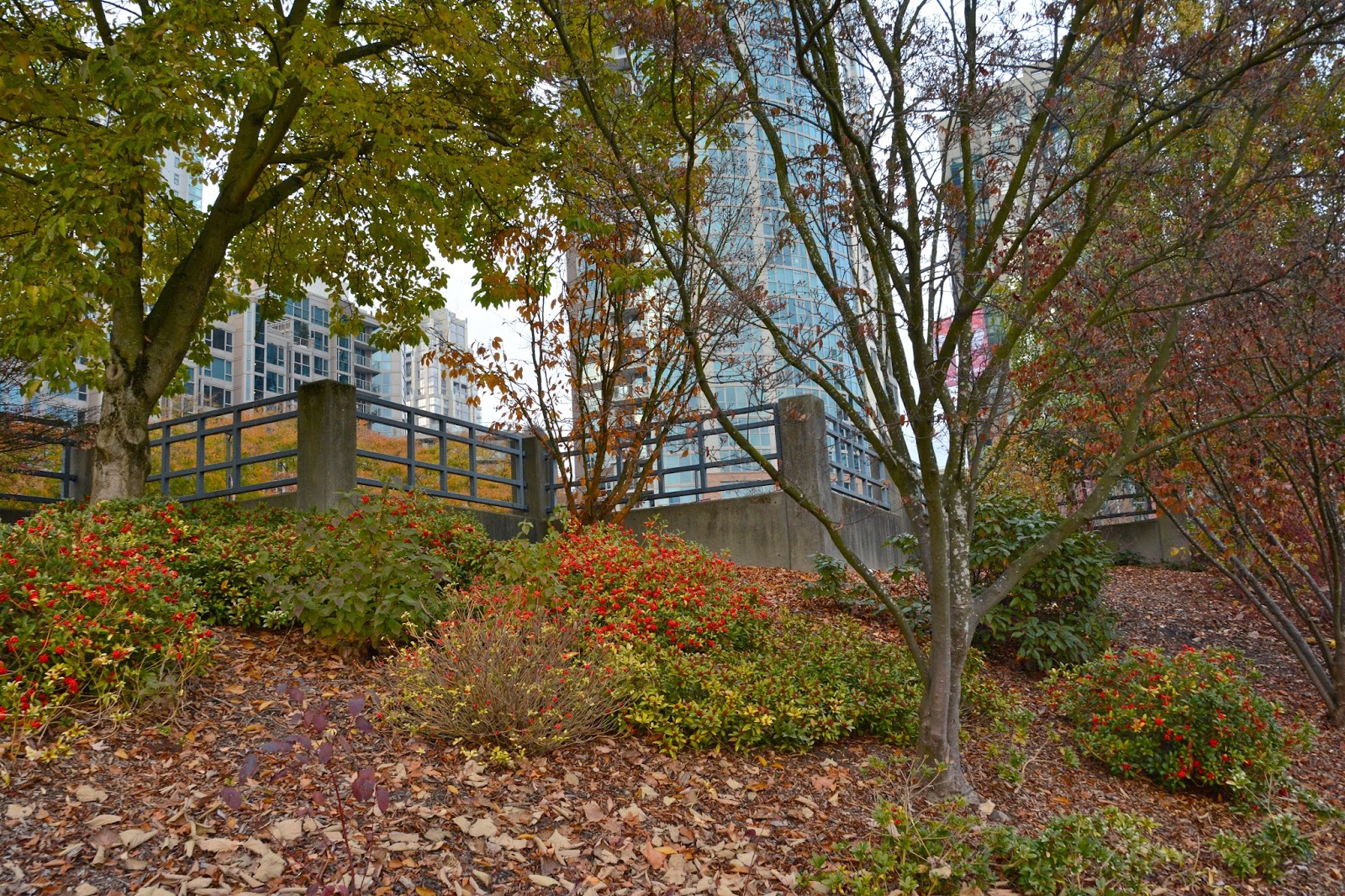 and I had some fun playing with the swaying branches.. 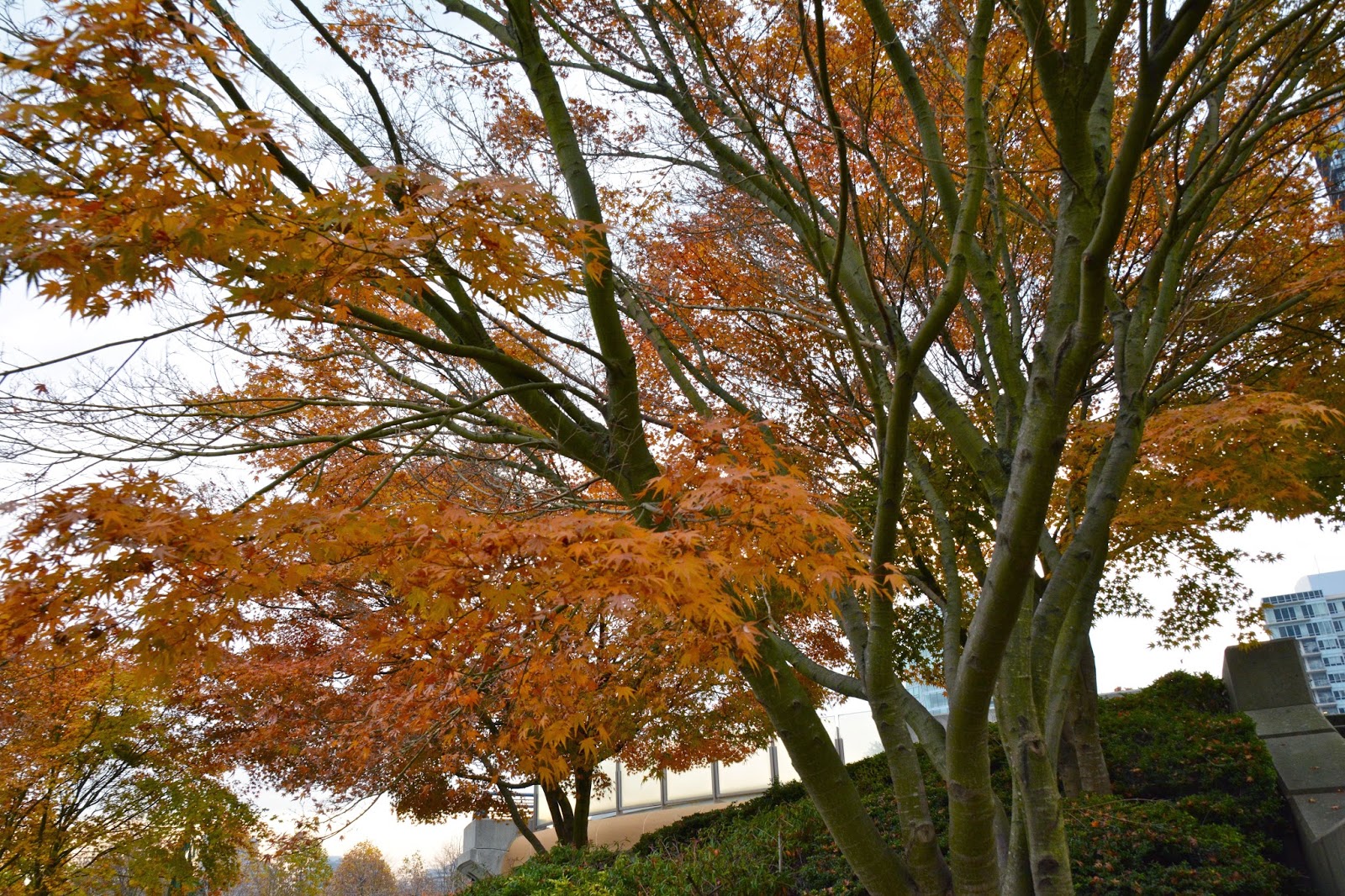 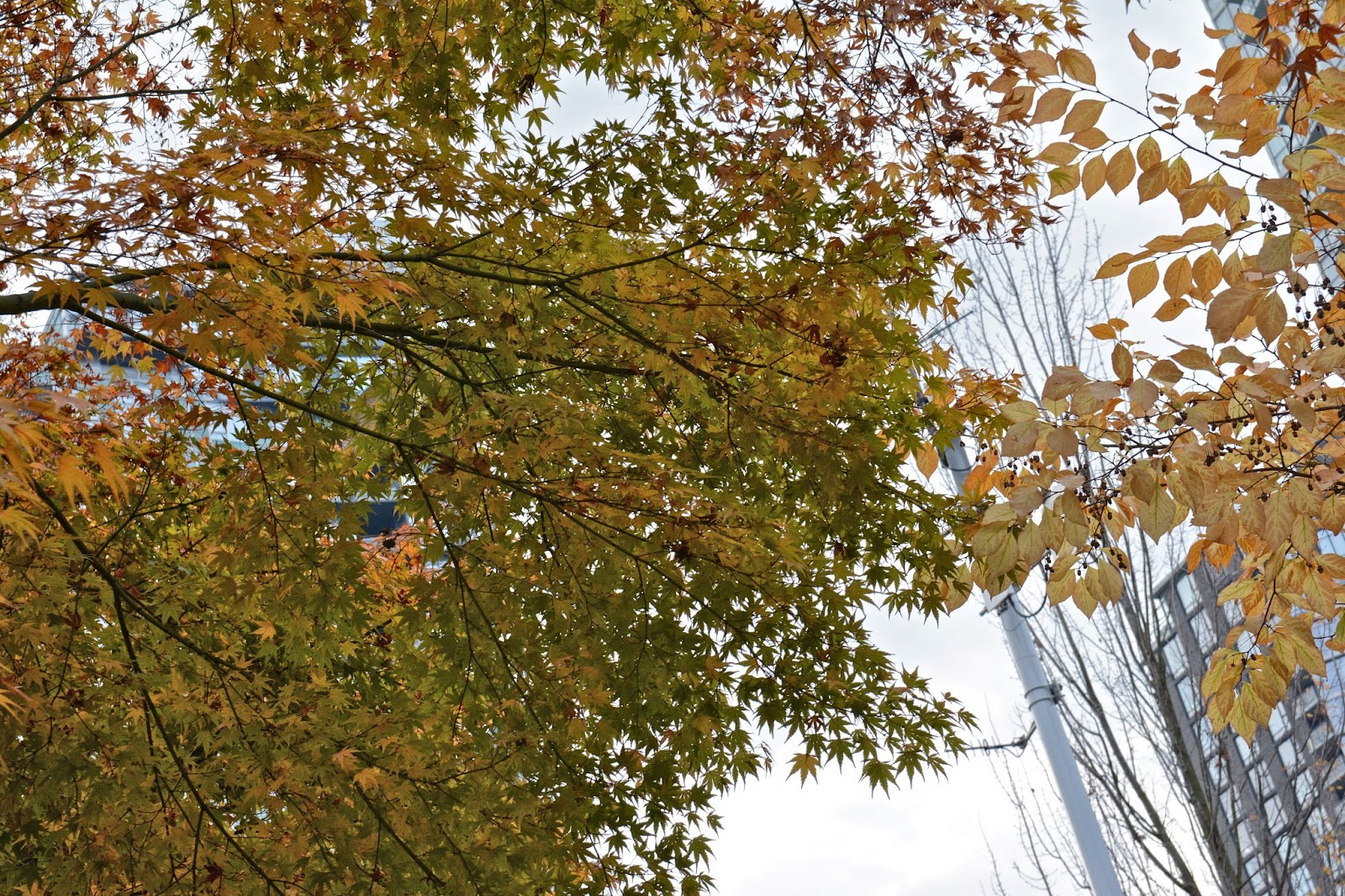 the spectrum of orangey shades in the treetops. 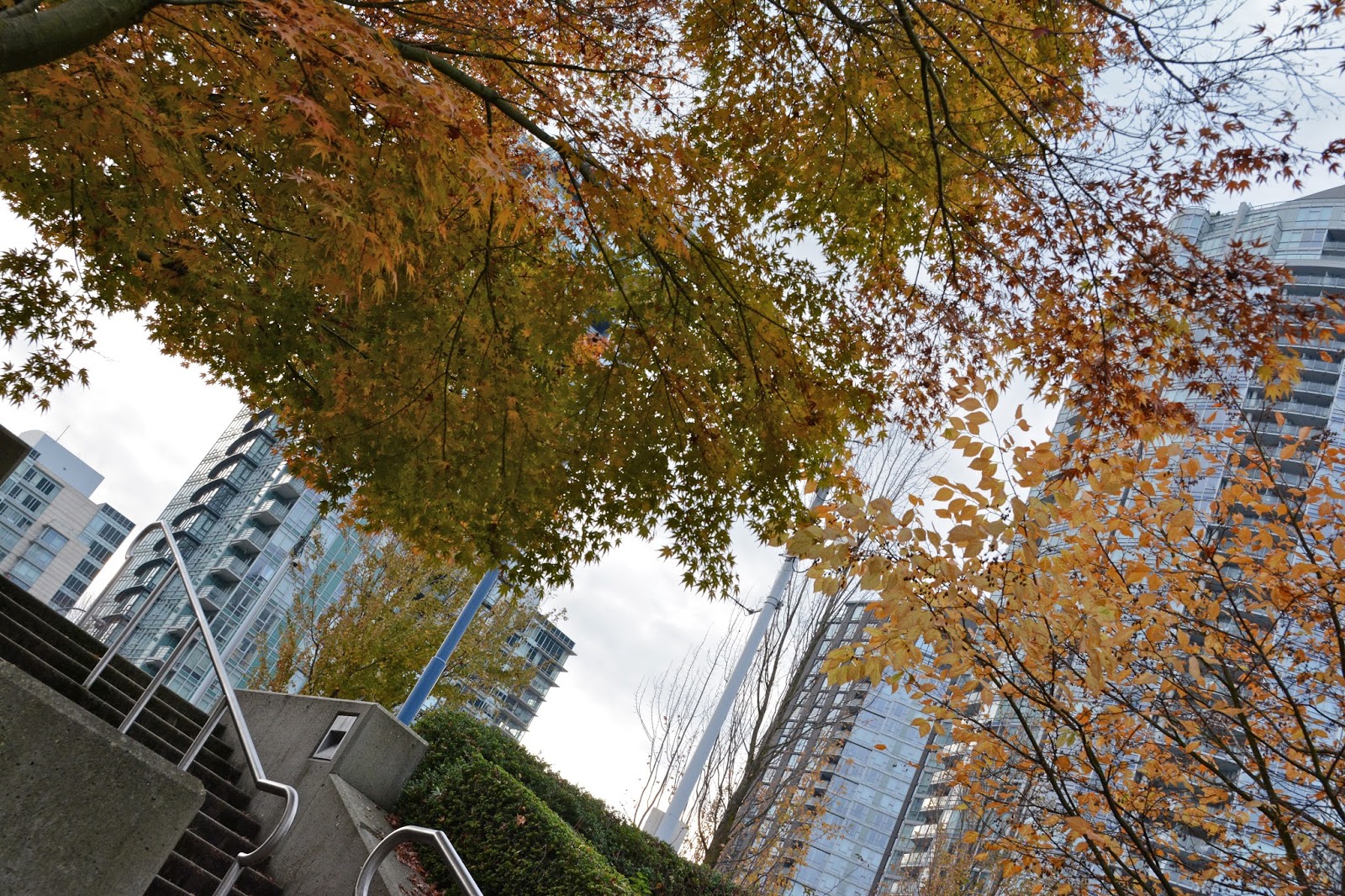 This magnolia tree was in full Spring mode.  Now how did that happen? 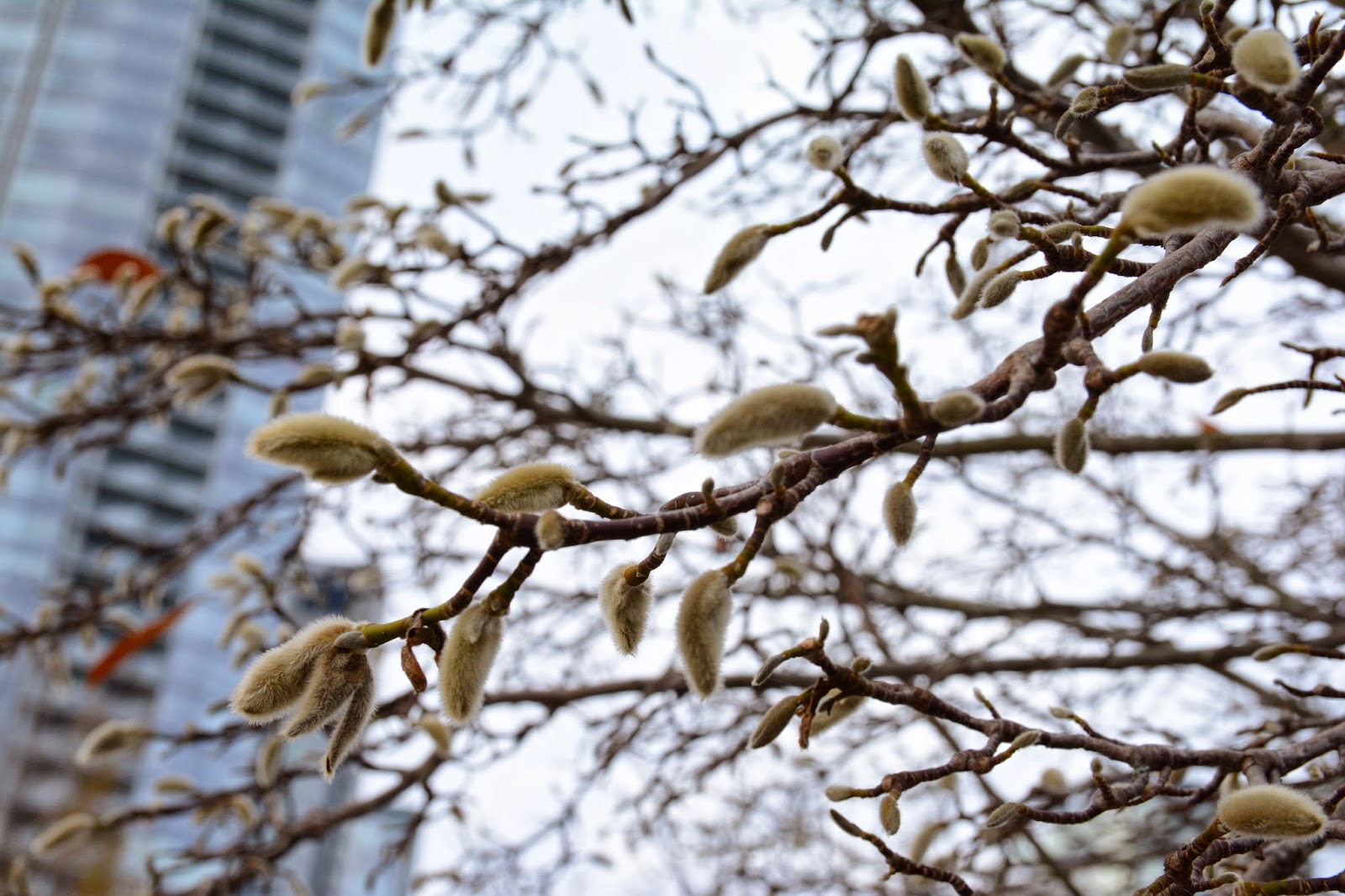 A faint tinge of pink began to appear as the sun prepared to set. 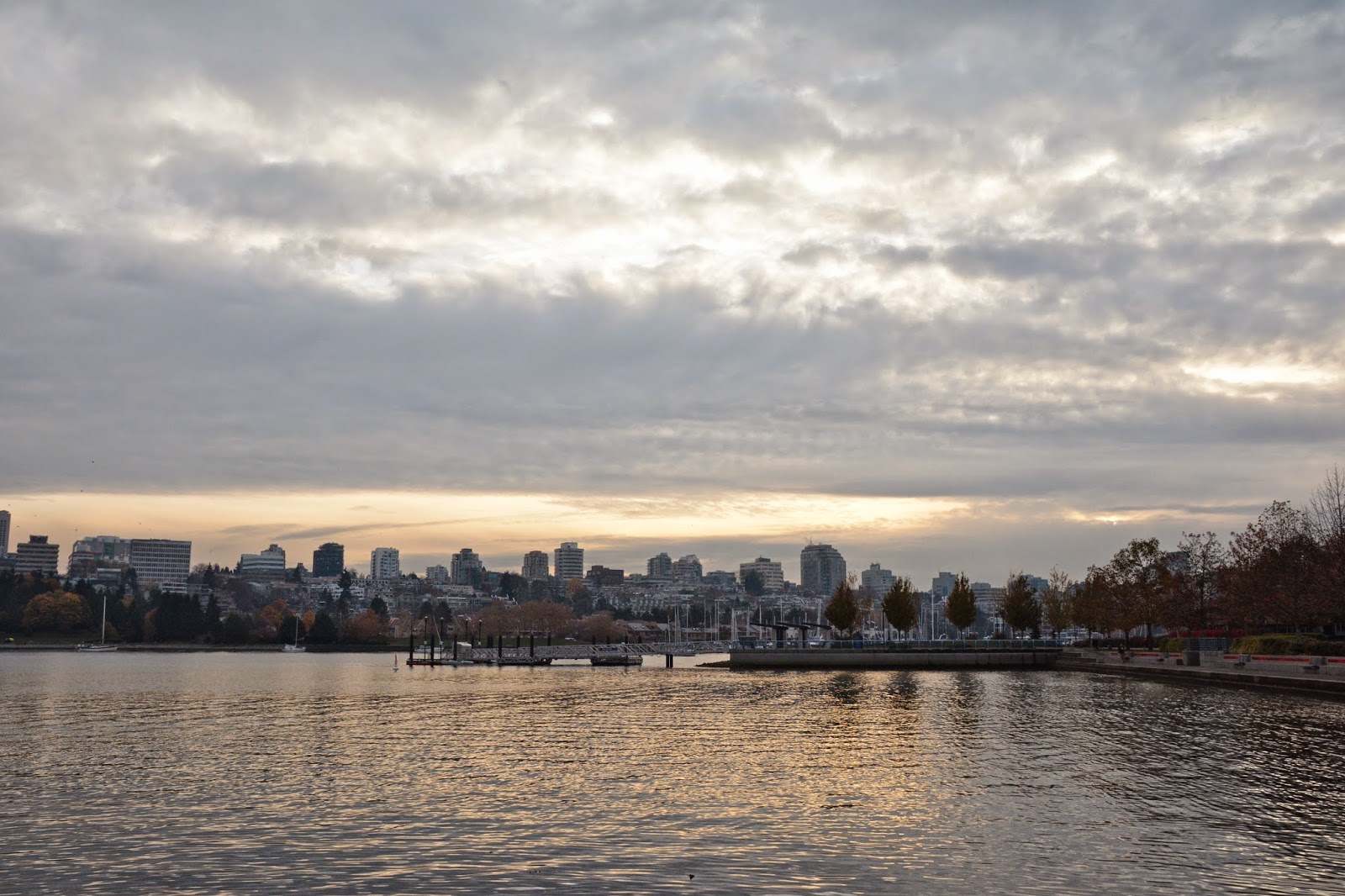 We walked along the seawall, and a familiar bush caught my eye in a new way. 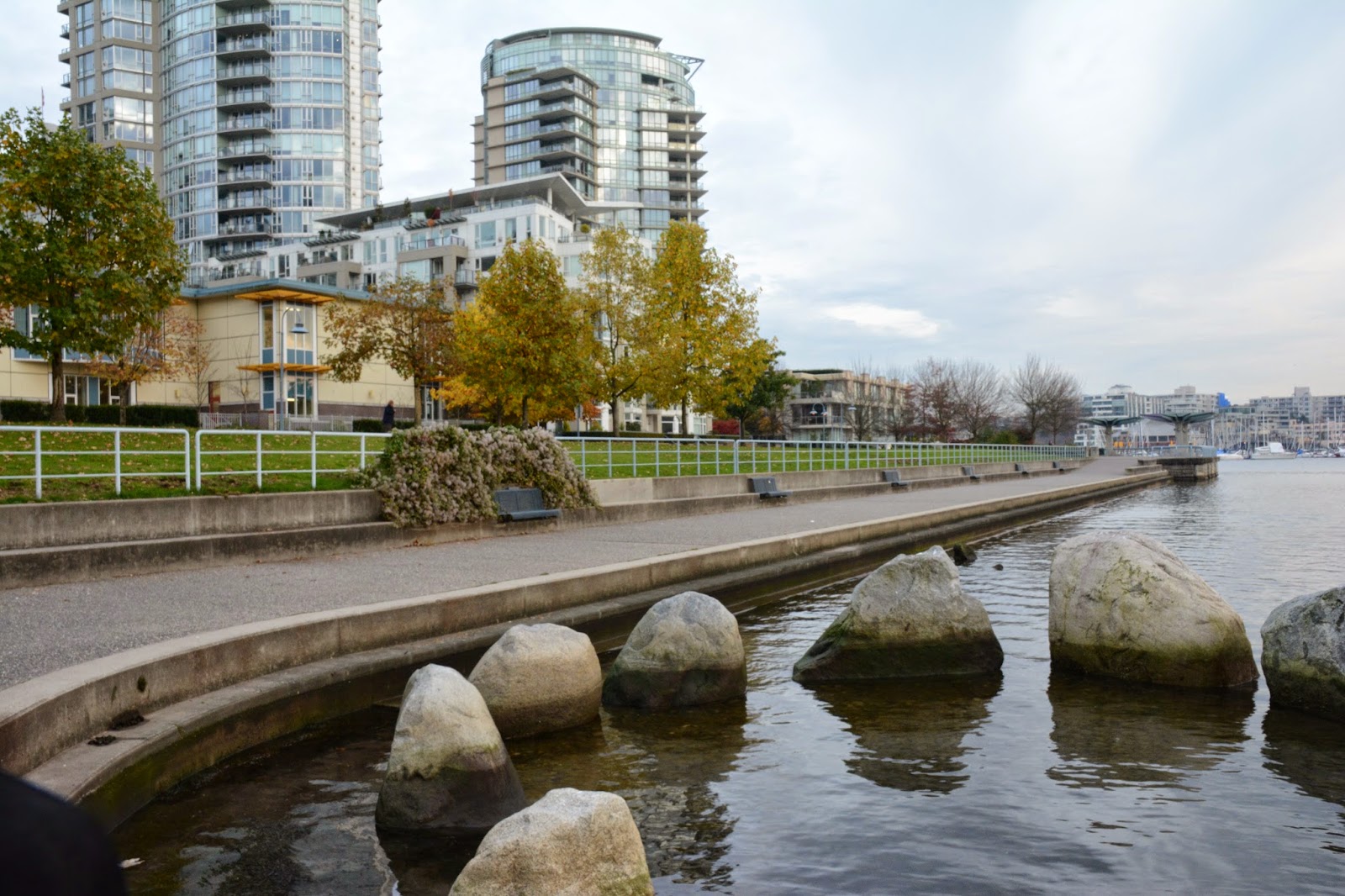 It goes through several stages every year, but this was the first time I noticed how it wraps.. 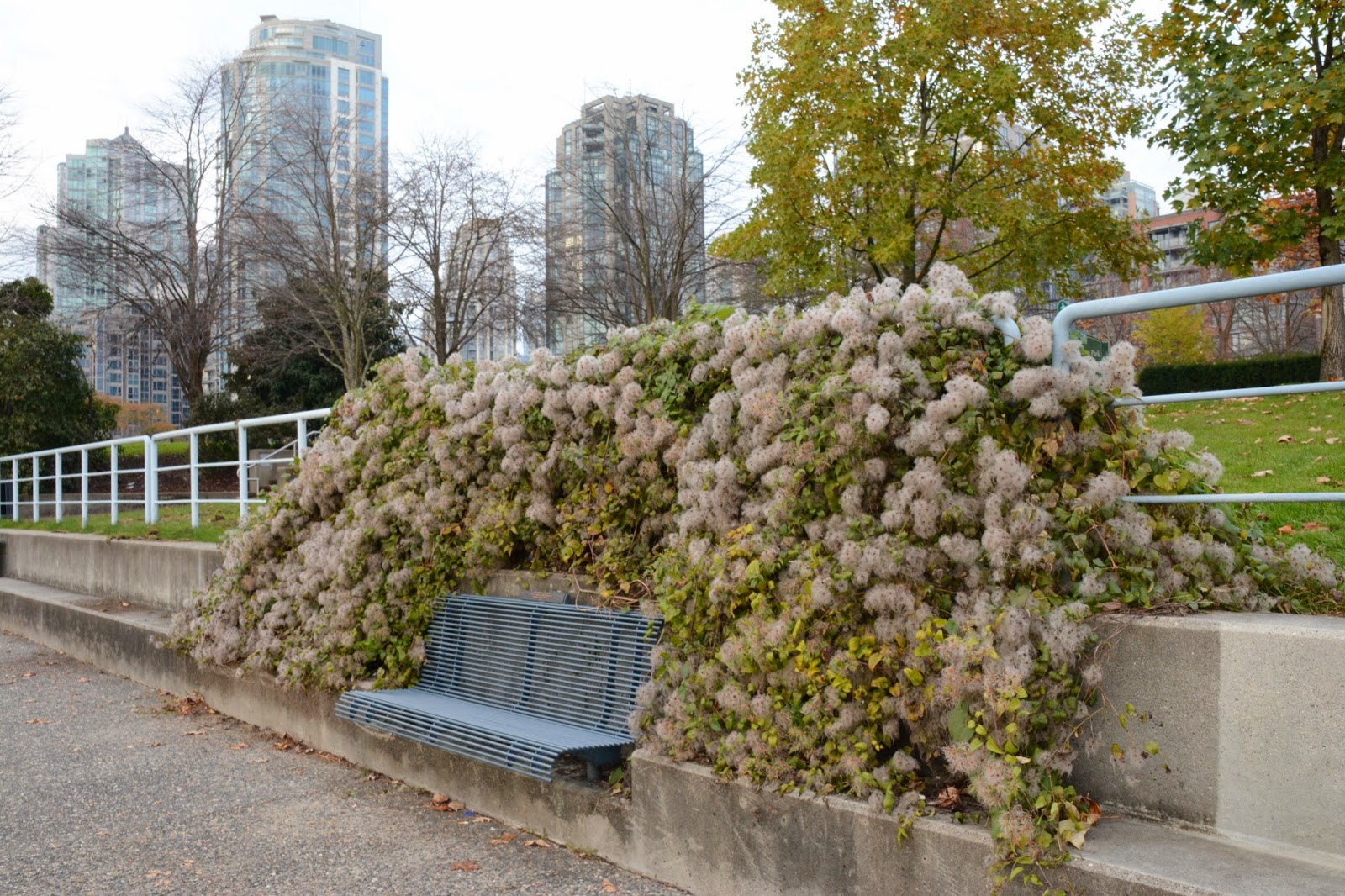 its sweet arms around that park bench. 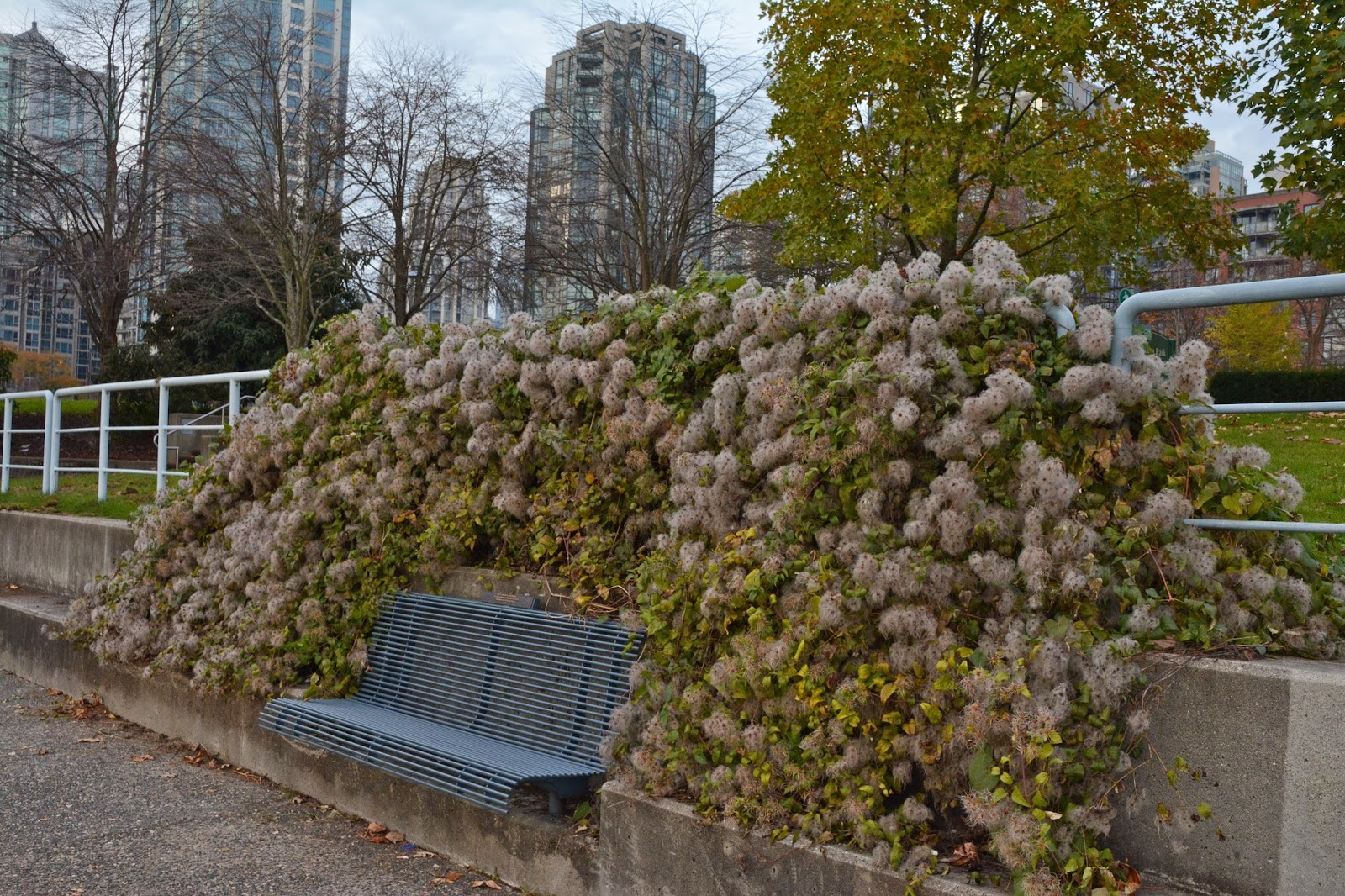 Bill and Black Jack obliged me by standing on the park bench for this shot. 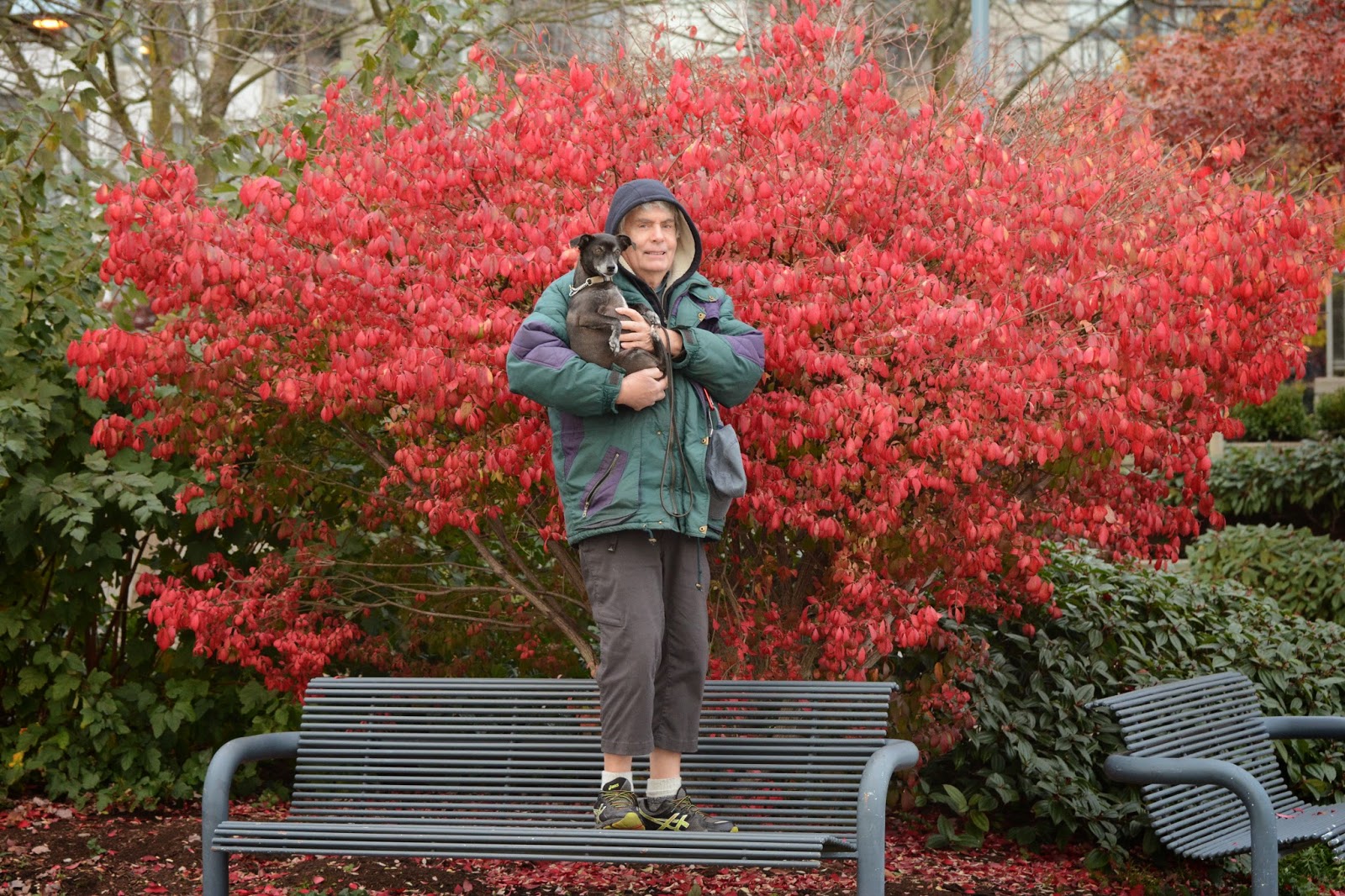 Another first to notice these symmetrical trees on my home street.  I've walked by them so many times, but seeing them from this angle yesterday made them look entirely different. 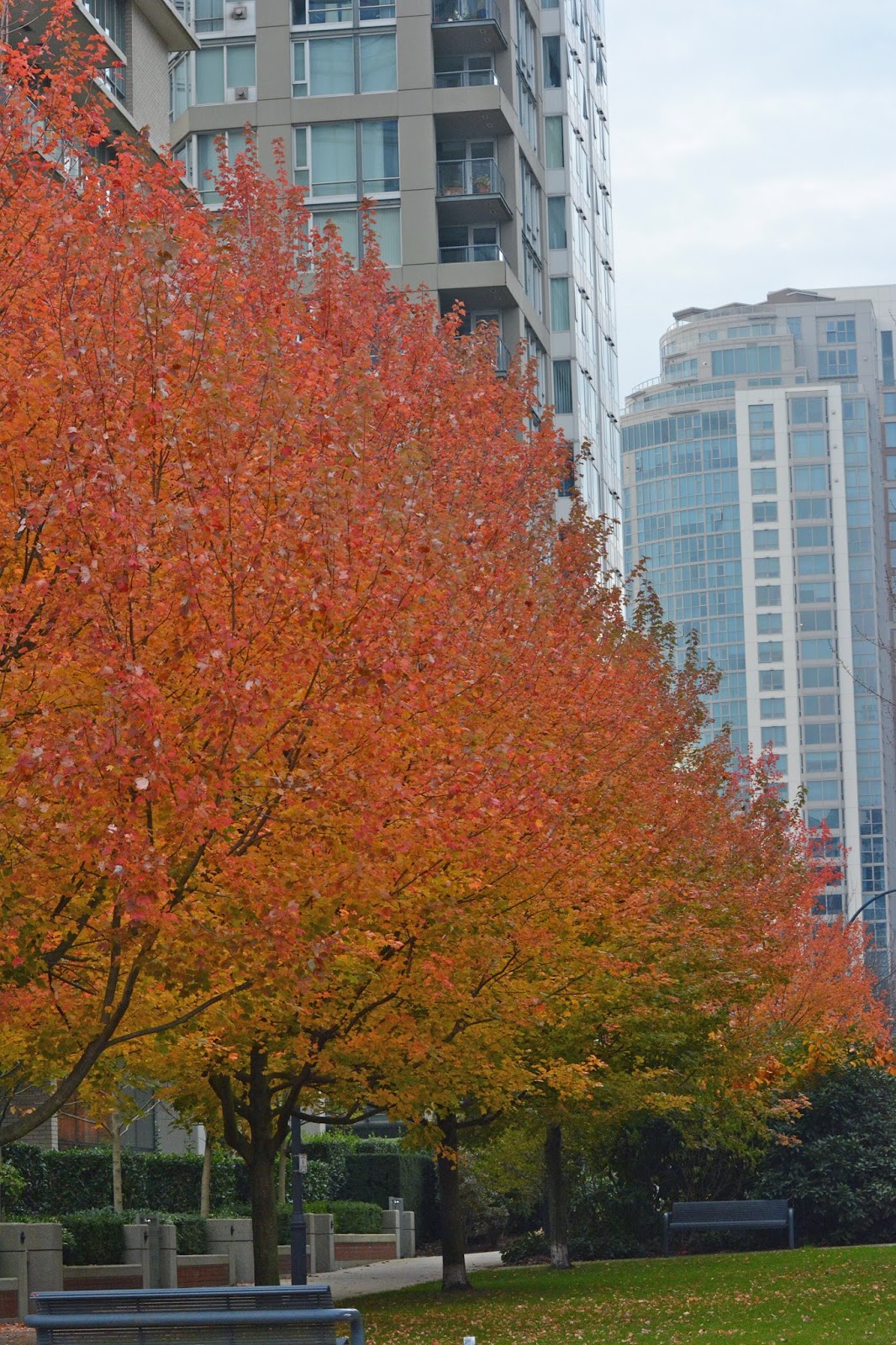 Scintillescent reflections in False Creek had to be shared.. 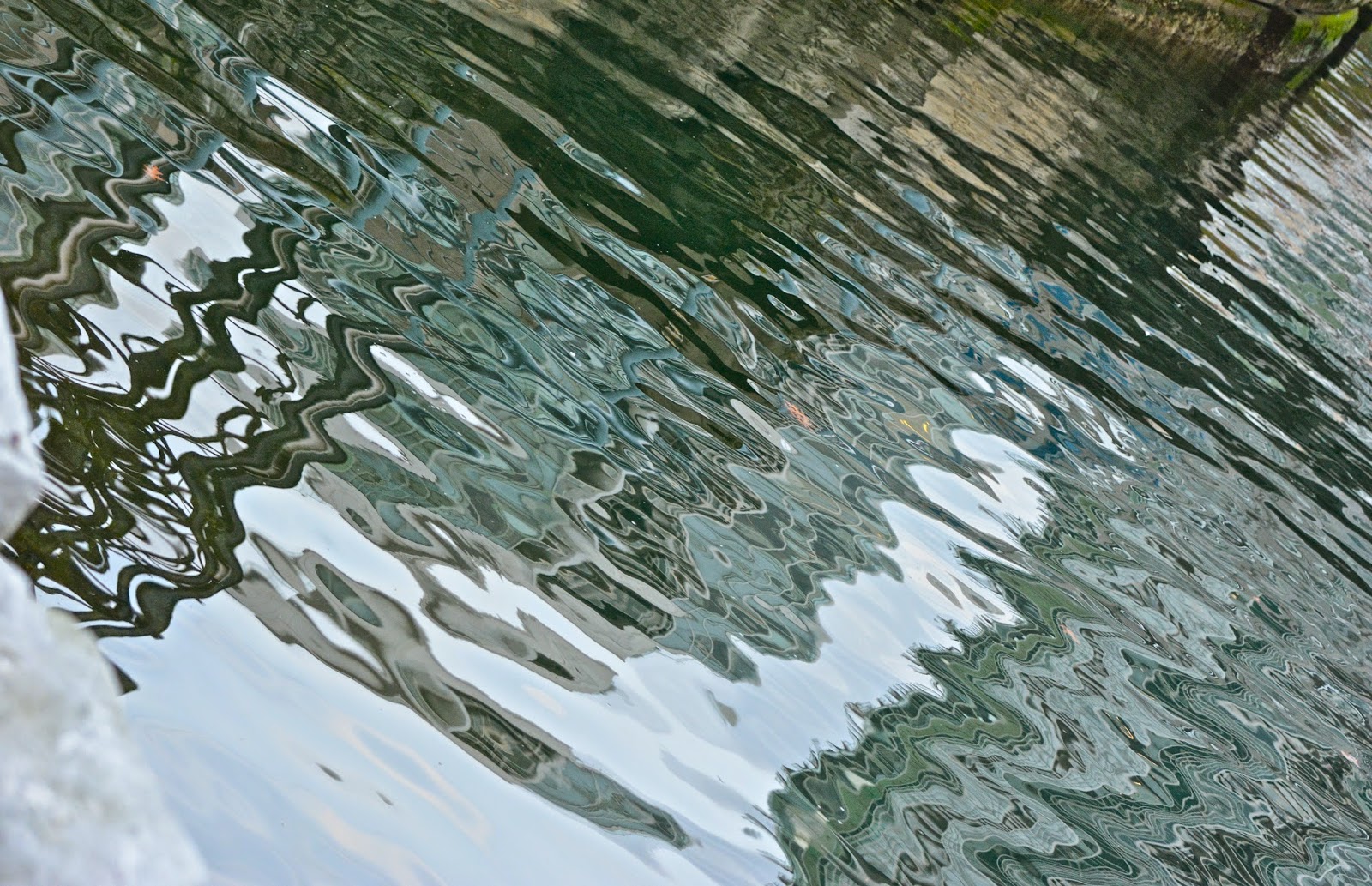 as did the warm shades of these leaves around a light standard. 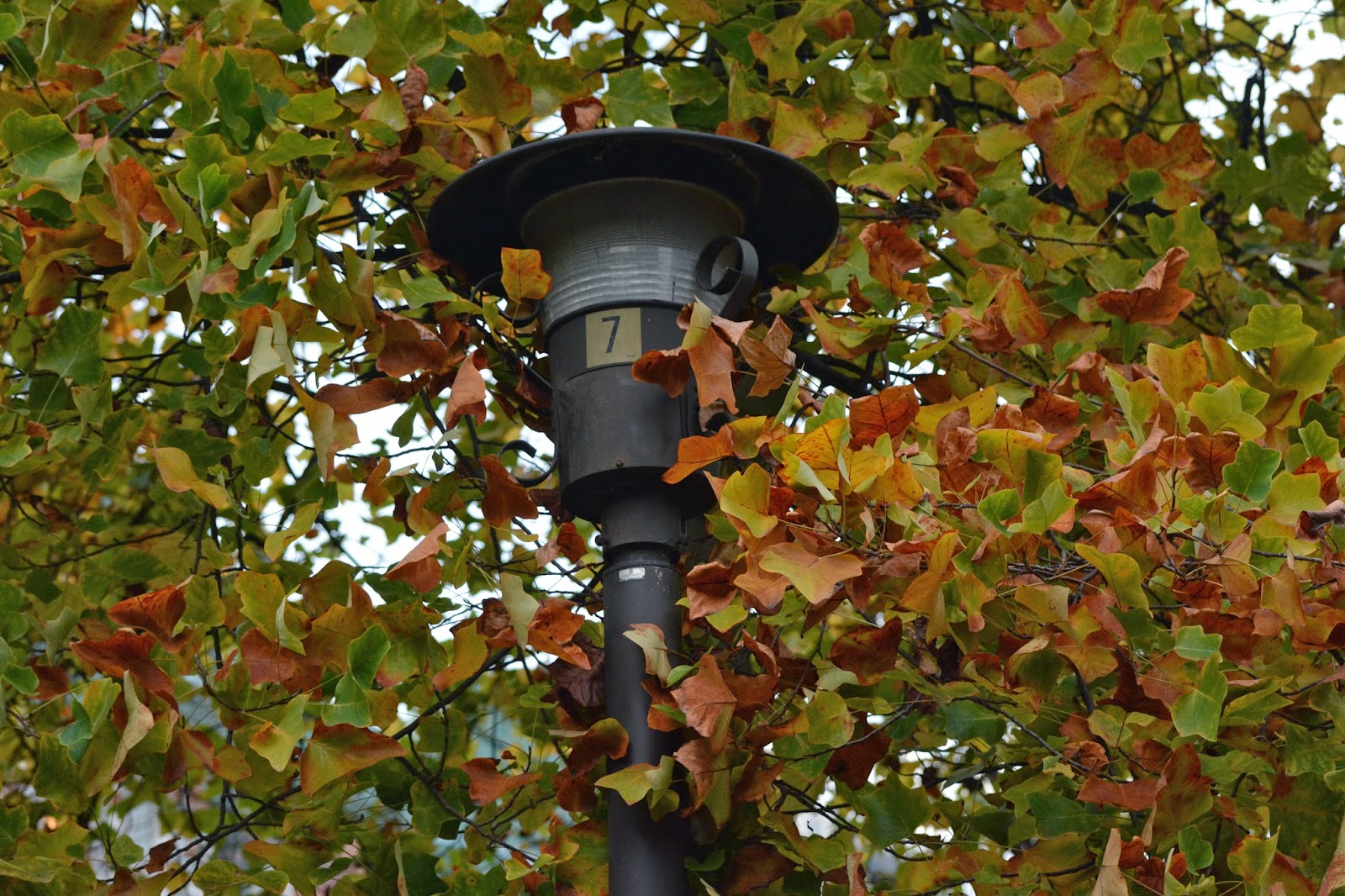 And, for just plain silly, how about this add that Bill spotted on a Yaletown lamp post.  Oh my goodness, we had laughed to see the date of 2015 on it, thinking how ridiculous it was to be advertising a party over a year ahead, but I'm feeling a bit sheepish to realize at this very second that it will indeed be 2015 in just over a month!  I do find solace in the fact that Bill and I were in sync, though :) 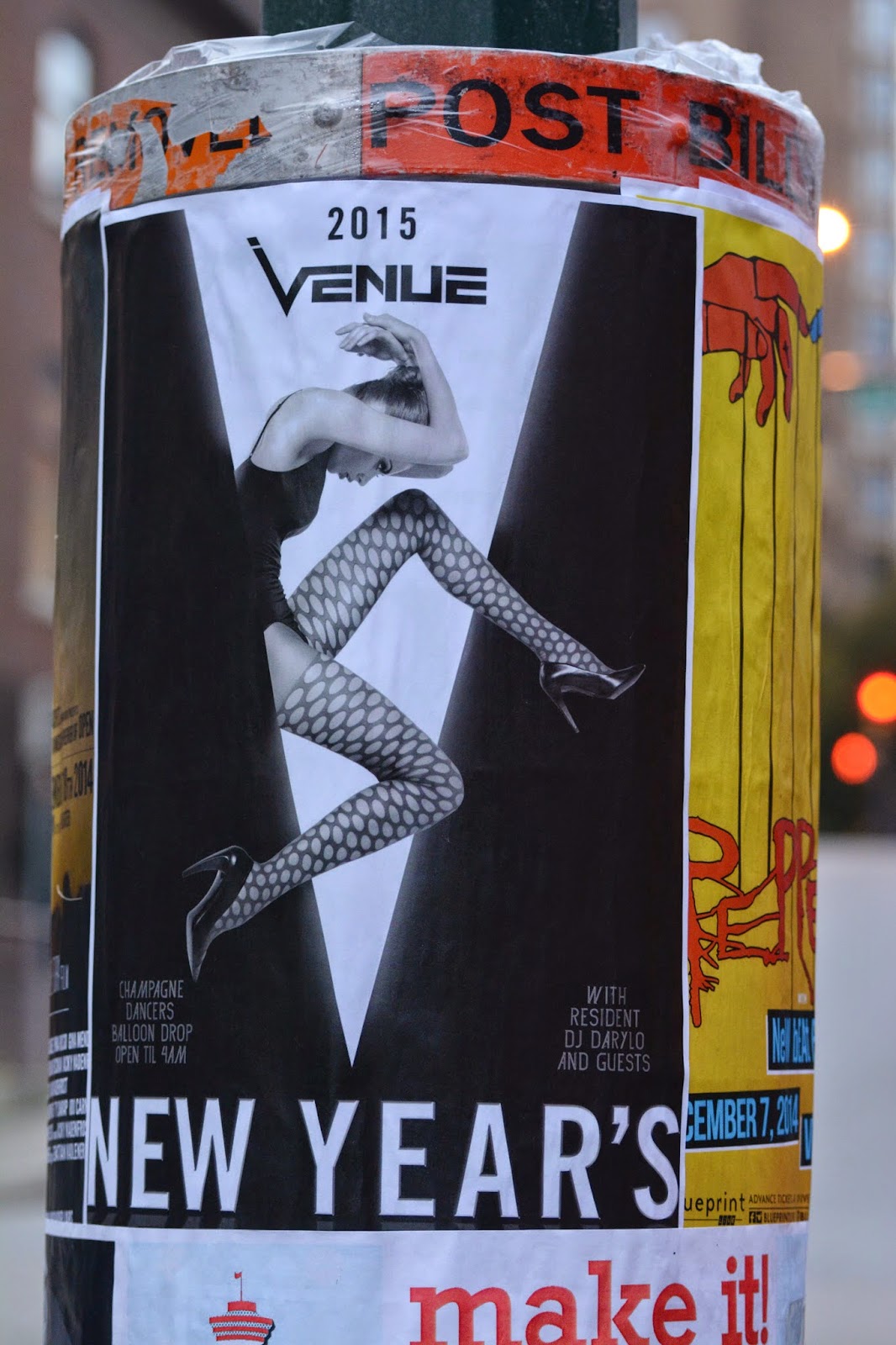 I don't know why I took this next shot.  It just appealed to me as we walked to Harrison Galleries.  It may not be obvious in the photograph but the crane is white, and somehow,, the contrast of strong lines resting against white clouds brought a softness to the image. 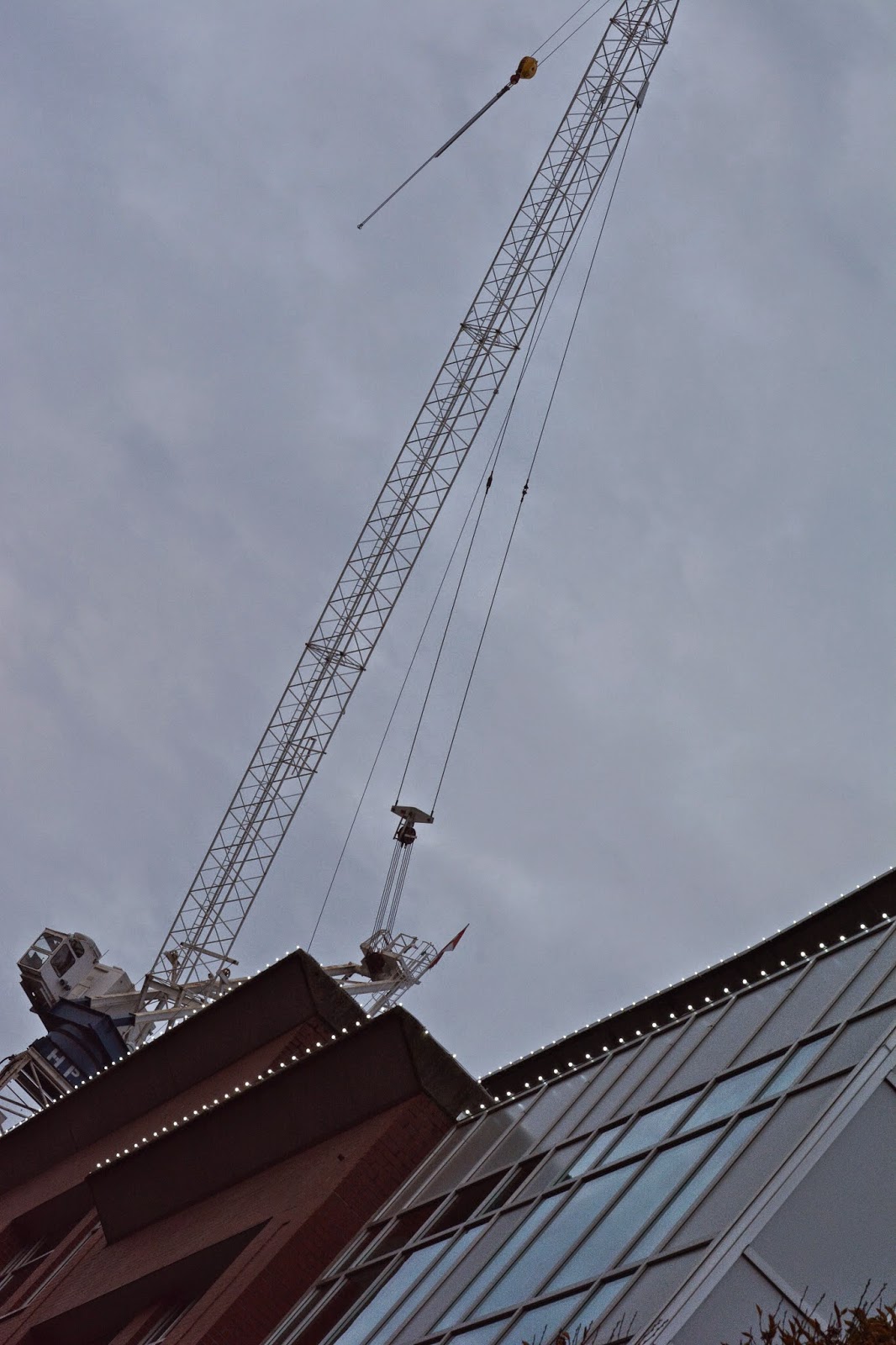 I posted about Jennifer Kostuik's gallery once before, but that day, we had stared from outside the window.  On Tuesday, we went inside for a few minutes. 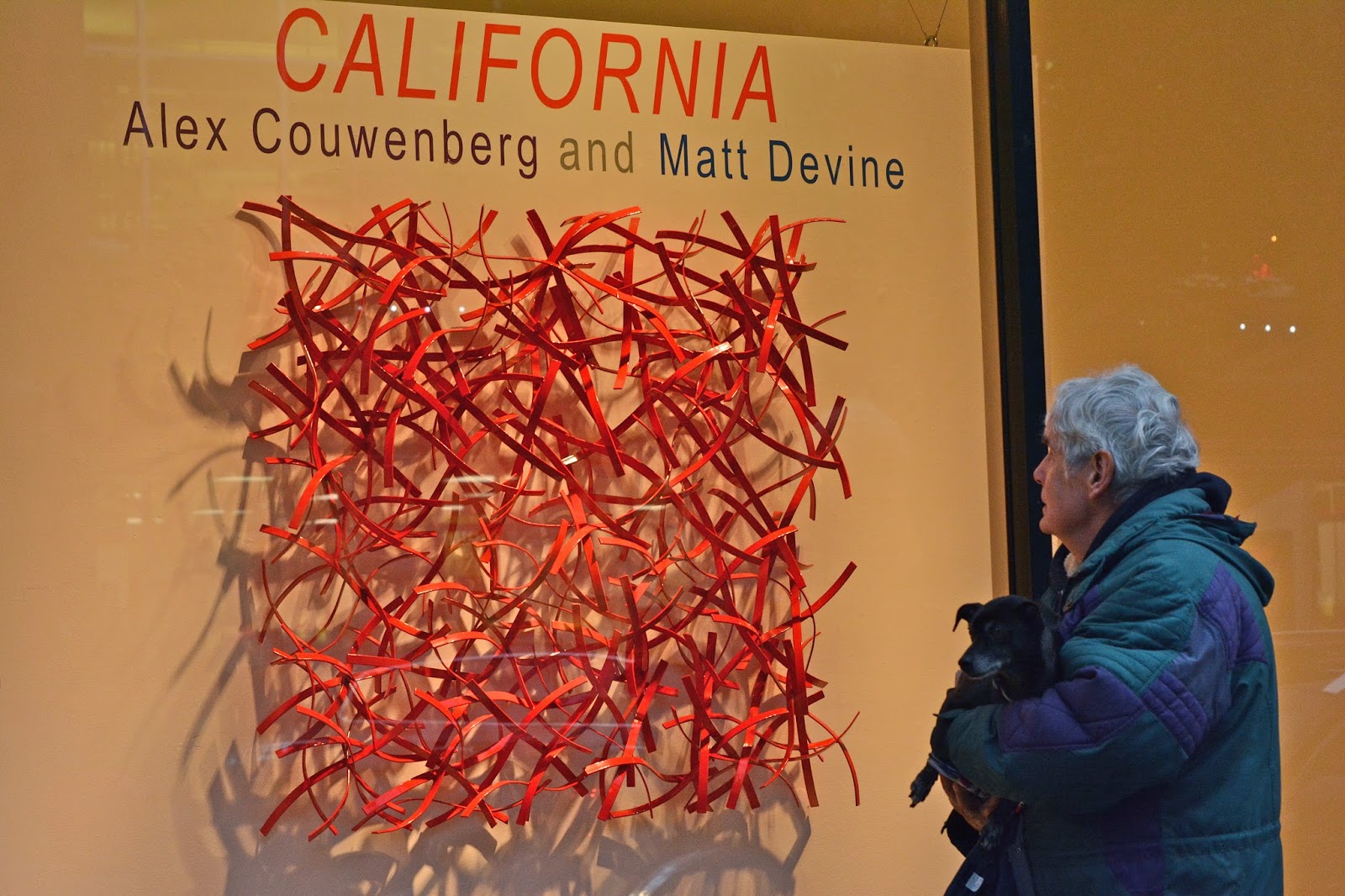 I have been a bit sad that, for most performing arts, taking photos is a no-no. 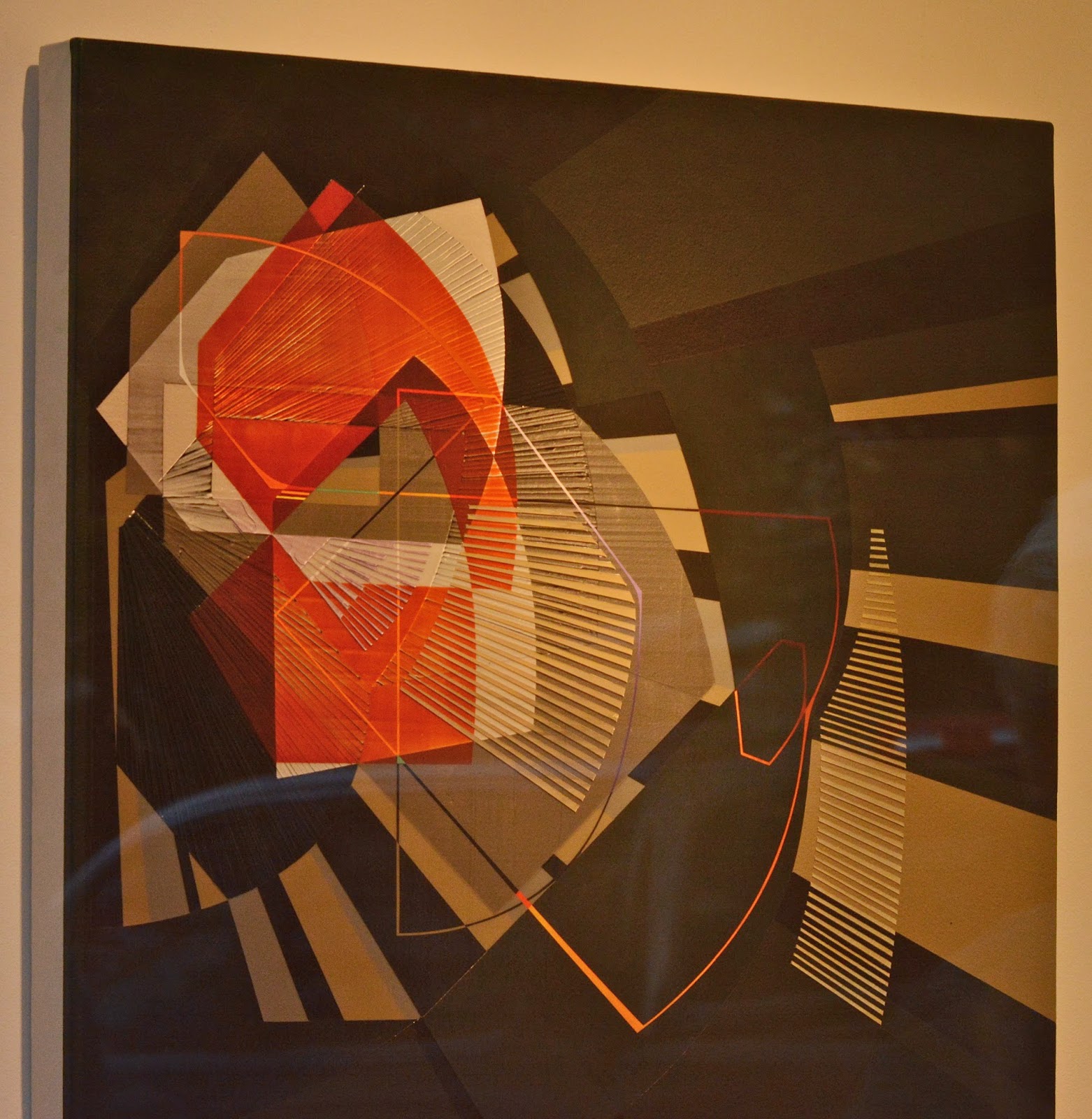 I love that this isn't the situation for the visual arts. 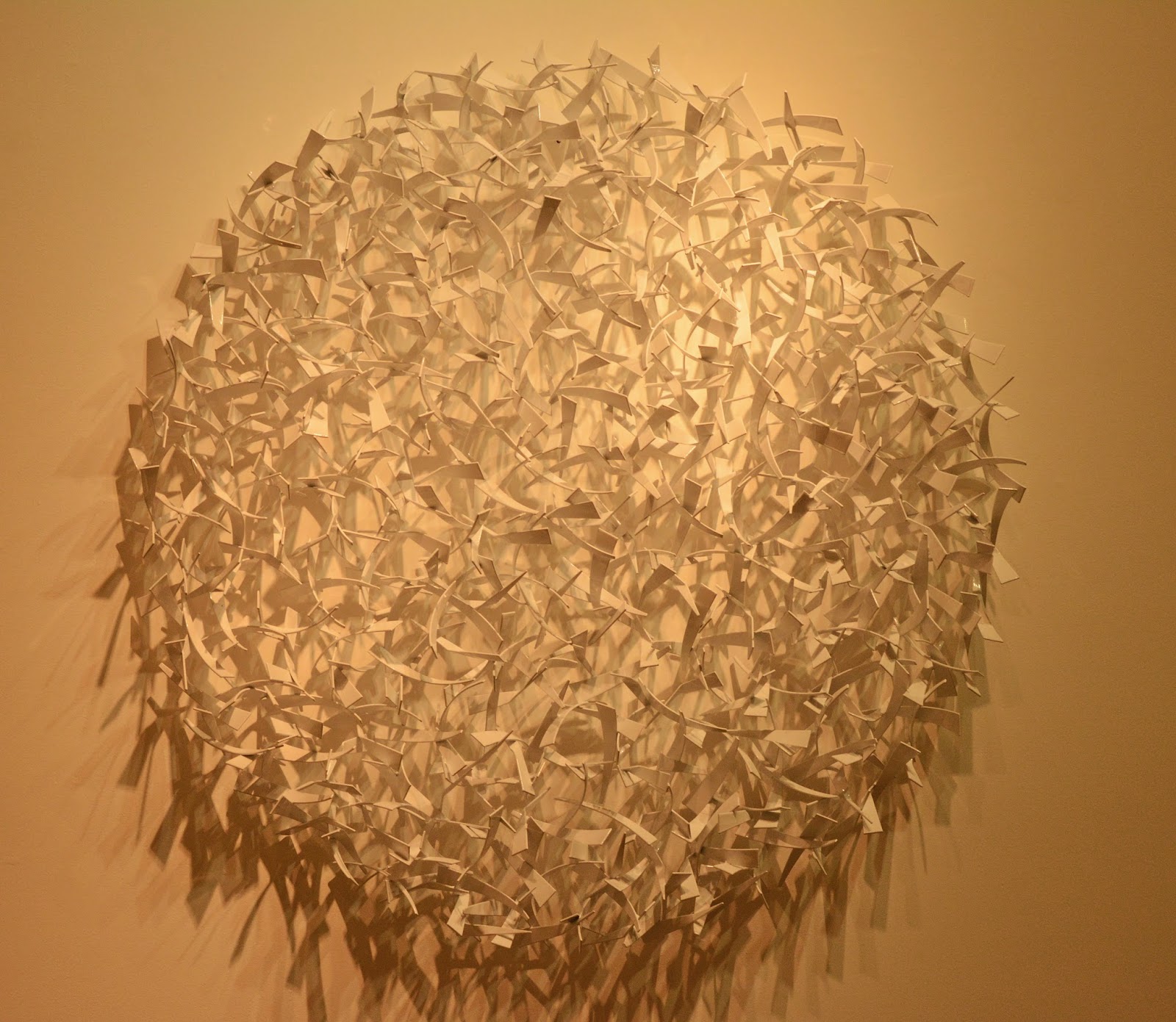 The price of all of these works by Matt Devine and Alex Couwenberg was out of our league, but there is a Silent Auction event coming up very soon with all works priced $3000 or less. 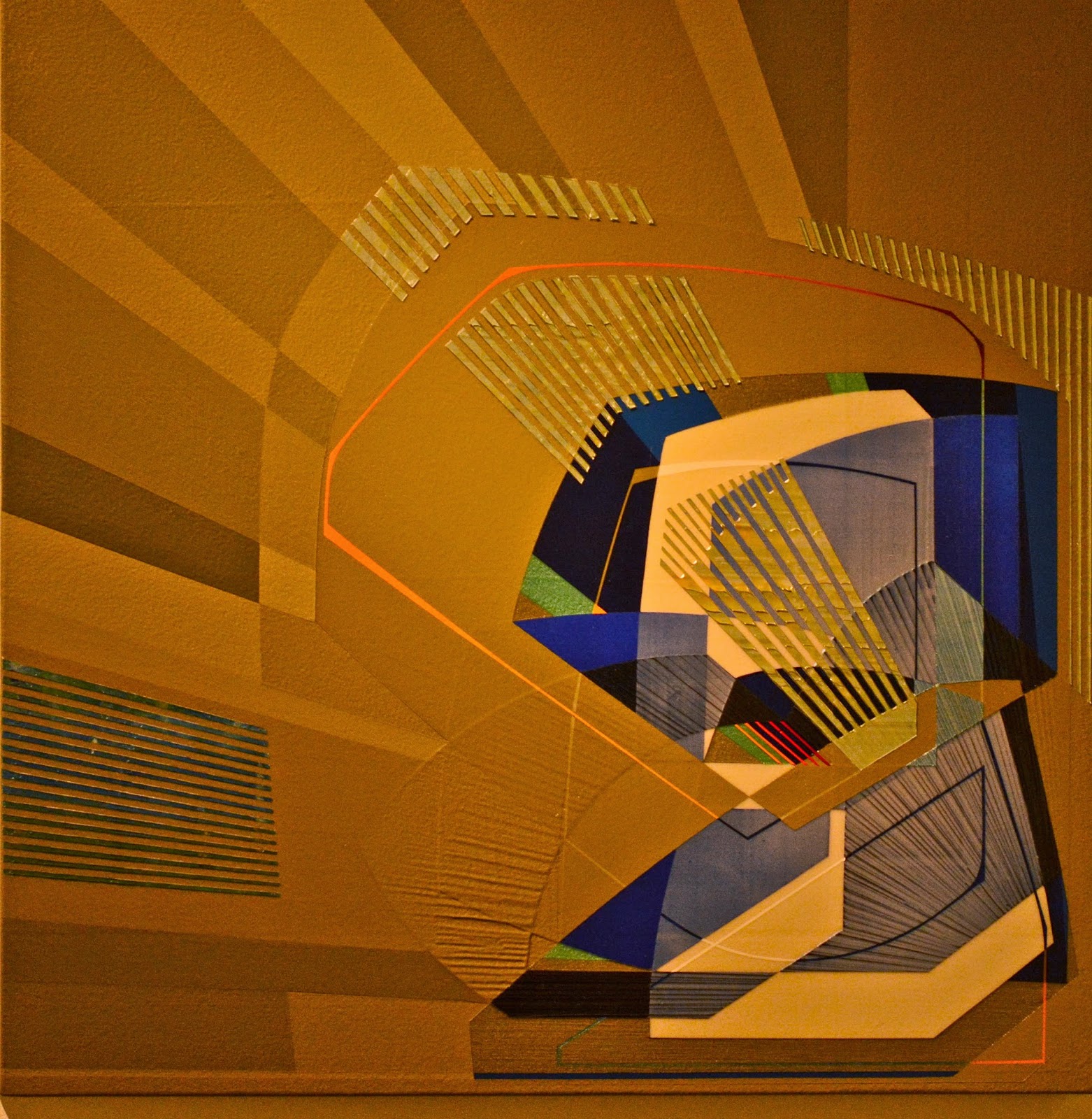 From November 27th until December 11th, you have an opportunity to suggest.. 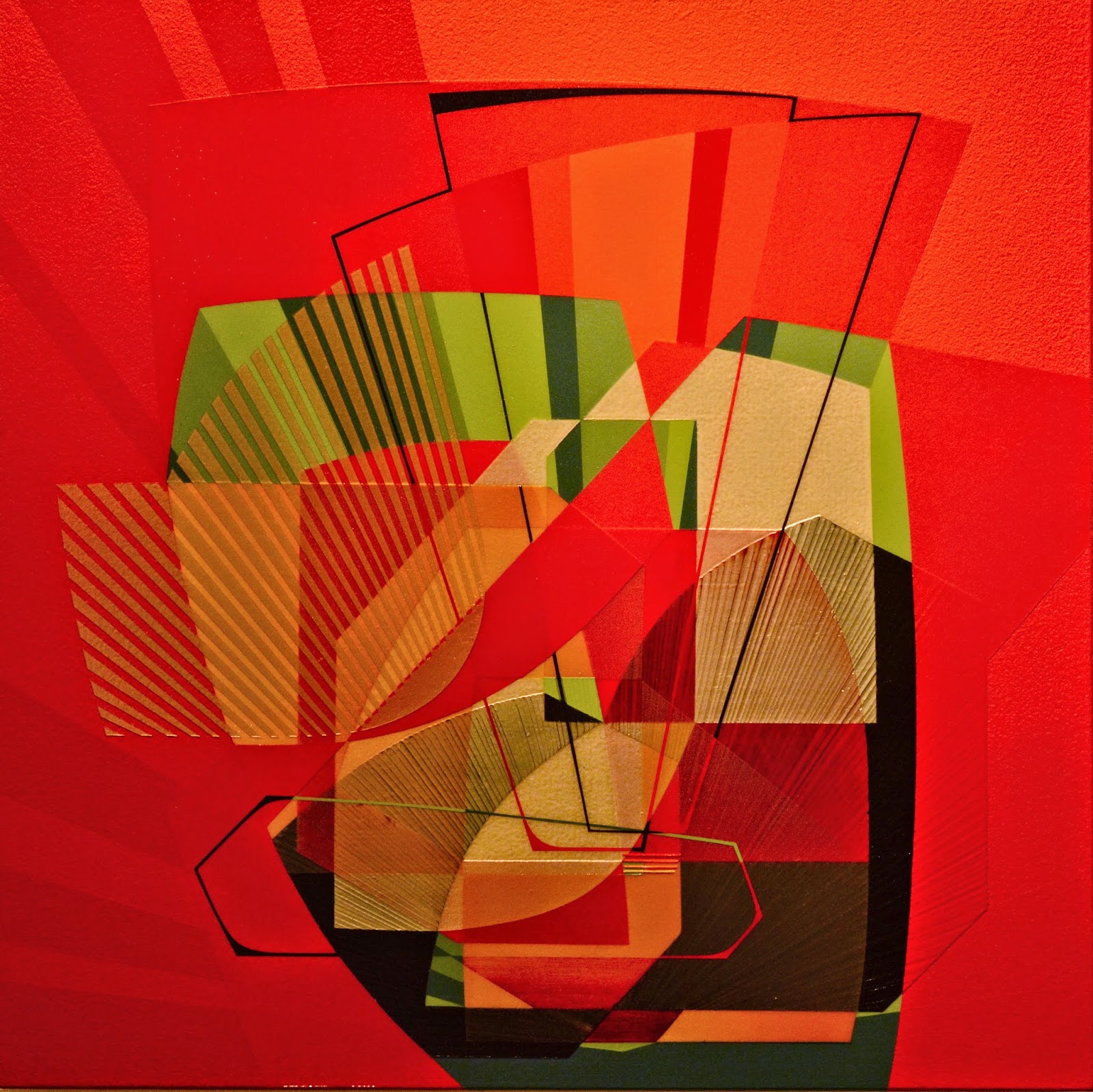 a sum that you can afford. 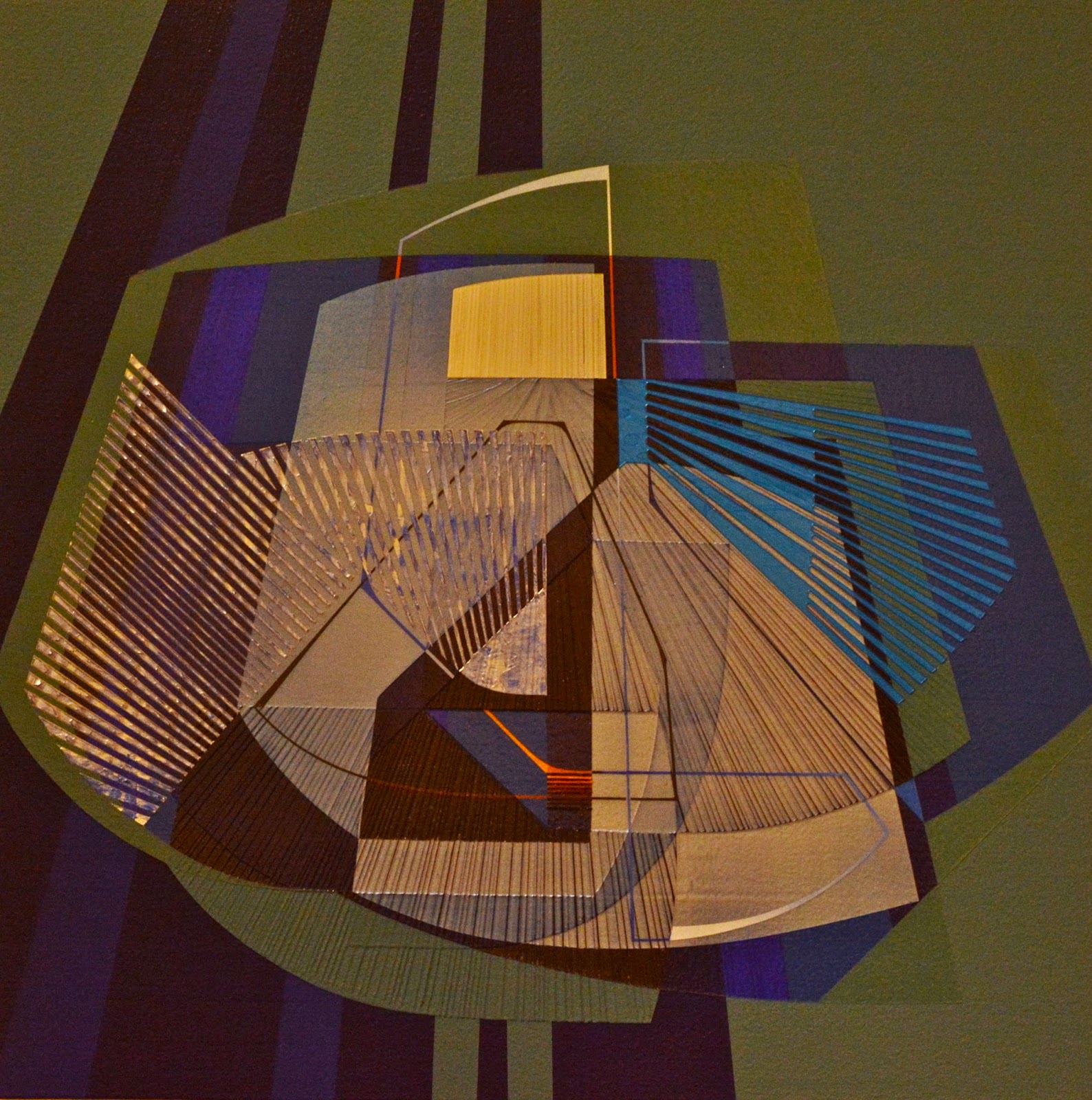 I zoomed in on sections of some of the works, loving the precision.. 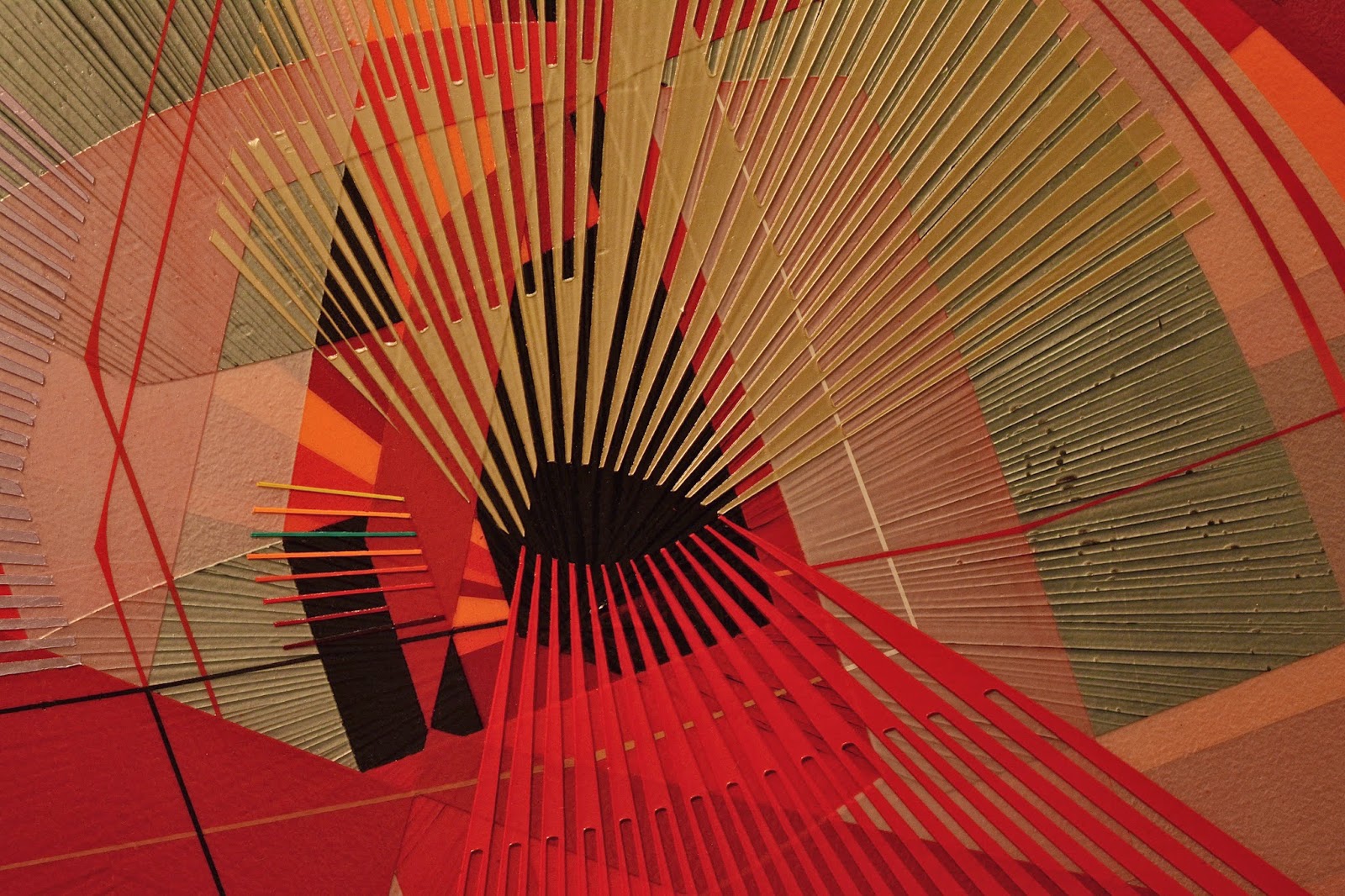 and textures of these metal clippings that I think could be defined as.. 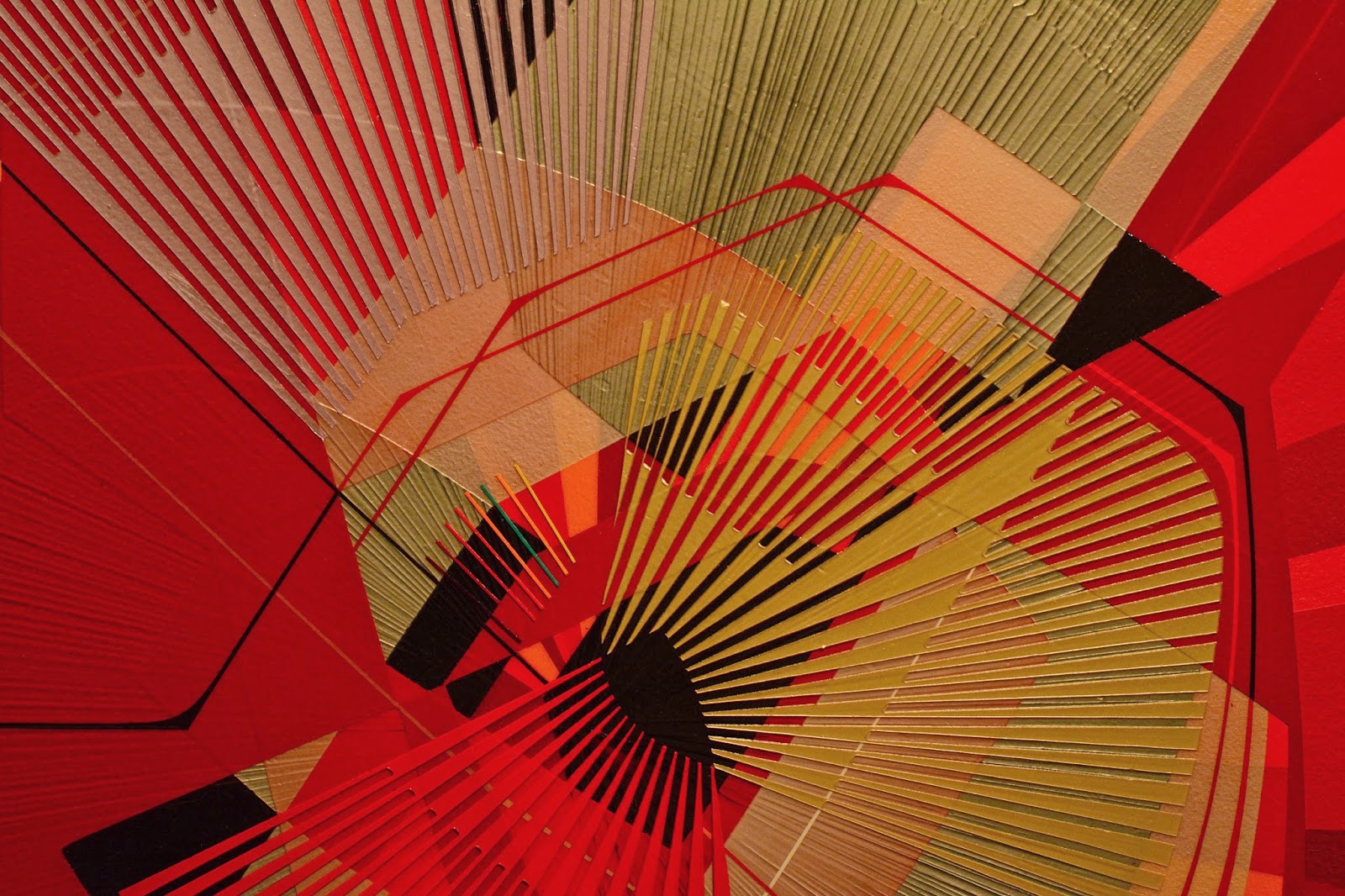 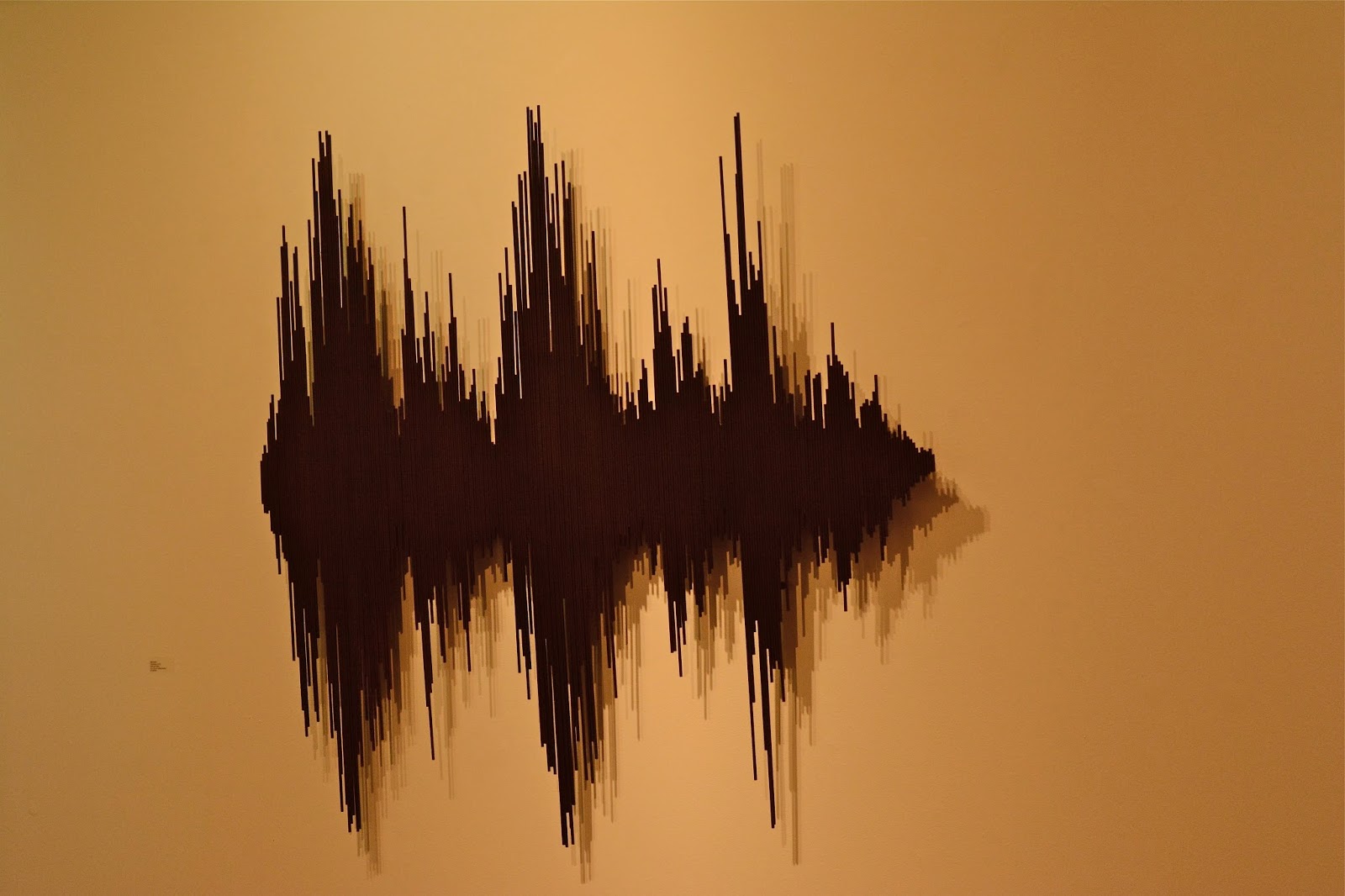 We finally did make it to our favourite gallery cafe, and though these photos are too dark, I really want you to meet Kitana (left) and Genny.  Those smiles.. 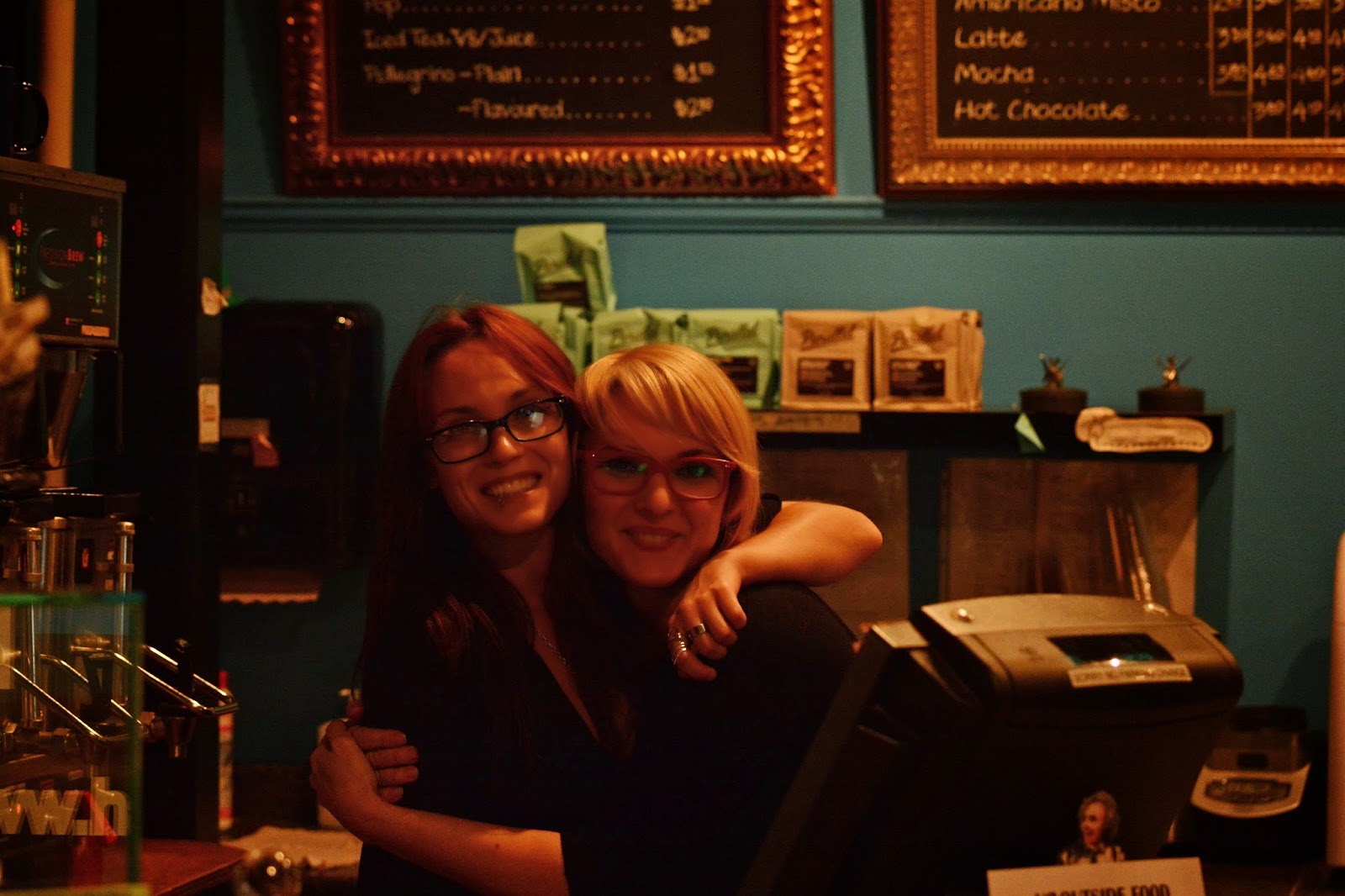 warm hearts and soothe souls and I think they make a perfect conclusion to this ABC Wednesday (on Thursday) post.  For many more ideas of ways to celebrate "S", do take a trip over to that sensational meme. Thank you so much for stopping by here on your way! 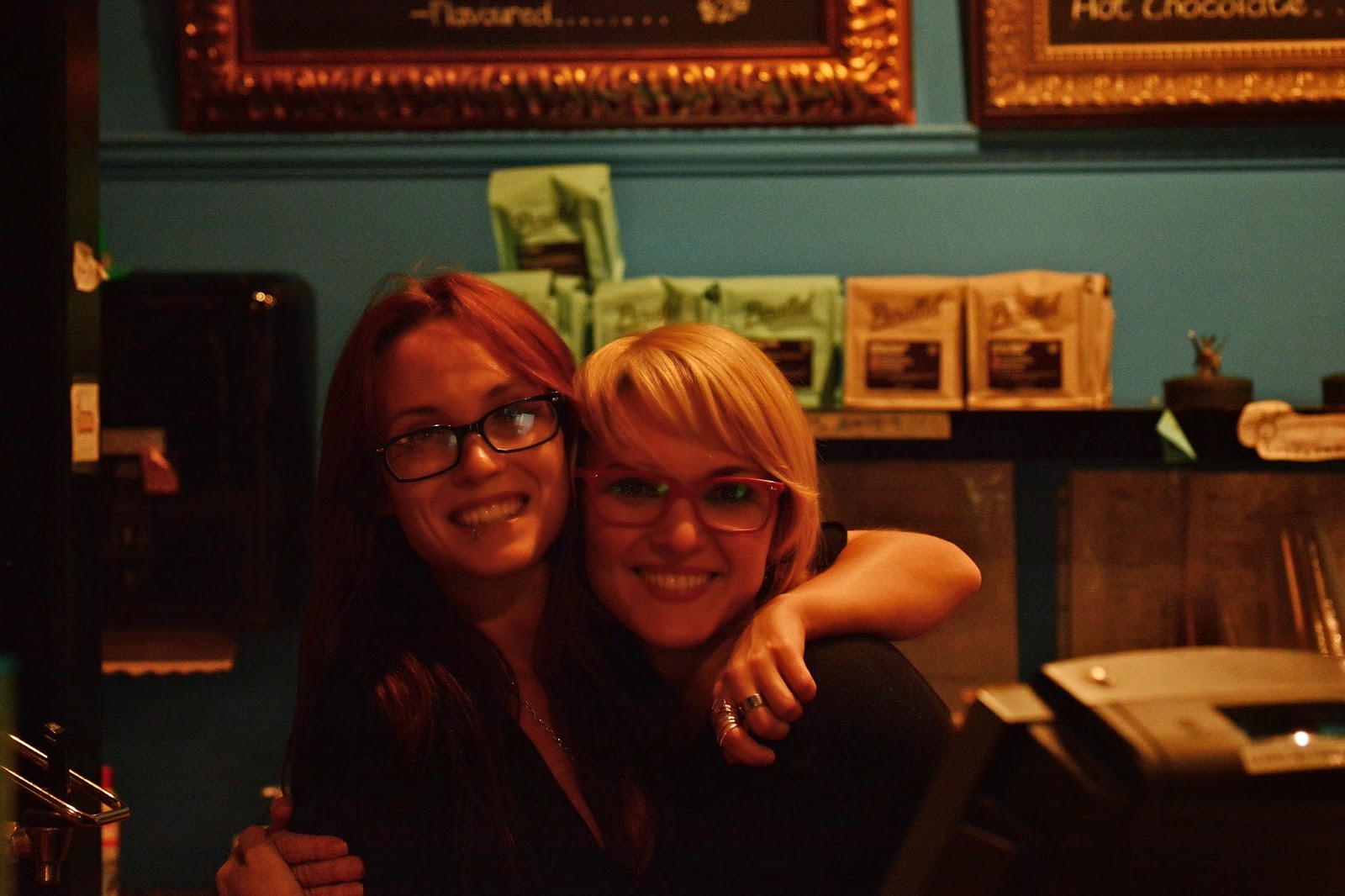