Our World Tuesday (on Wednesday)

I am posting our comings and goings over the past few days to Our World Tuesday with many thanks to hosts, Arija, Gattina, Lady Fi, Sylvia, Sandy and Jennifer, but first..

a plea for help to find a lost dog in Vancouver.  She is greatly missed after slipping her collar on Hallowe'en night, terrified by fire crackers and trick or treaters.  I have never met her but her name is Zoe and she is around 30 pounds (smaller than she may appear in this photo).  She's a nervous dog, so if you should happen to spot her, please do not chase after her.  That would cause her to bolt again. She isn't interested in treats but does like dogs and is curious about people if they don't come at her. She is very sweet and does not bite or bark. There were two possible sightings of her near David Lam Park on November 10th.  You can learn more about her by going to this site.
Have you seen Zoe?  If so, call Cathy at 604-825-6913 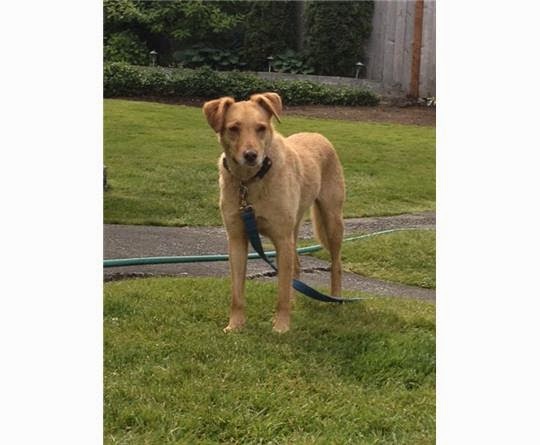 On Saturday, with darkness falling, Bill and I rode our bikes to this spot along False Creek.  Just behind the dock is a grassy patch.  On days when we feel Black Jack hasn't had quite enough opportunity to let off steam, we love that she can run safely there, even in the dark. 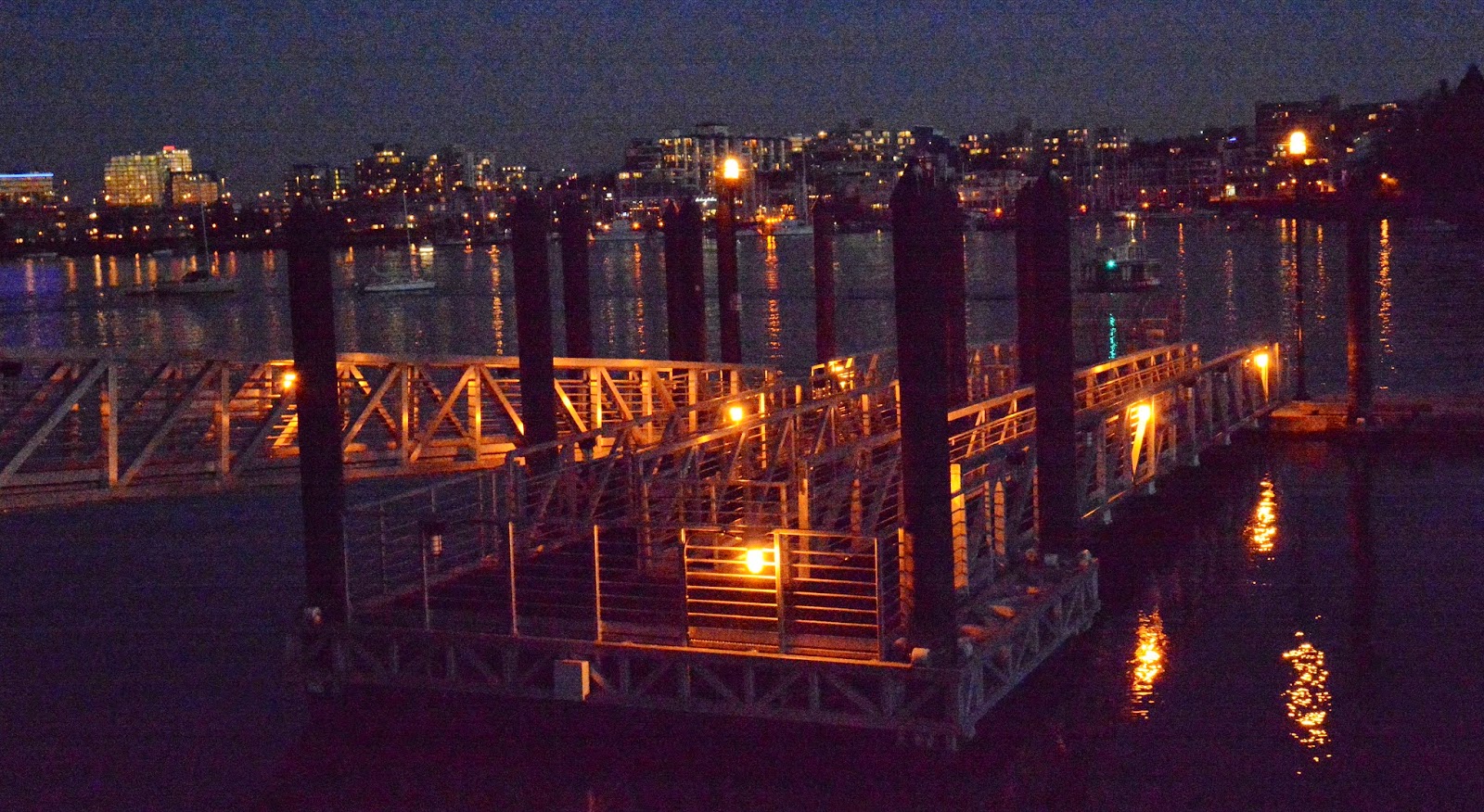 You can sort of see that grassy patch behind Bill.  I asked him to stand in front of the cement beam, thinking the light coming from the ground would be enough to catch the shot of him with Black Jack.  As soon as he stood there, I realized my idea wasn't working.  Moving to the side didn't really work either.  Ever-patient Bill knew that would happen but didn't say a word.  He's the best! 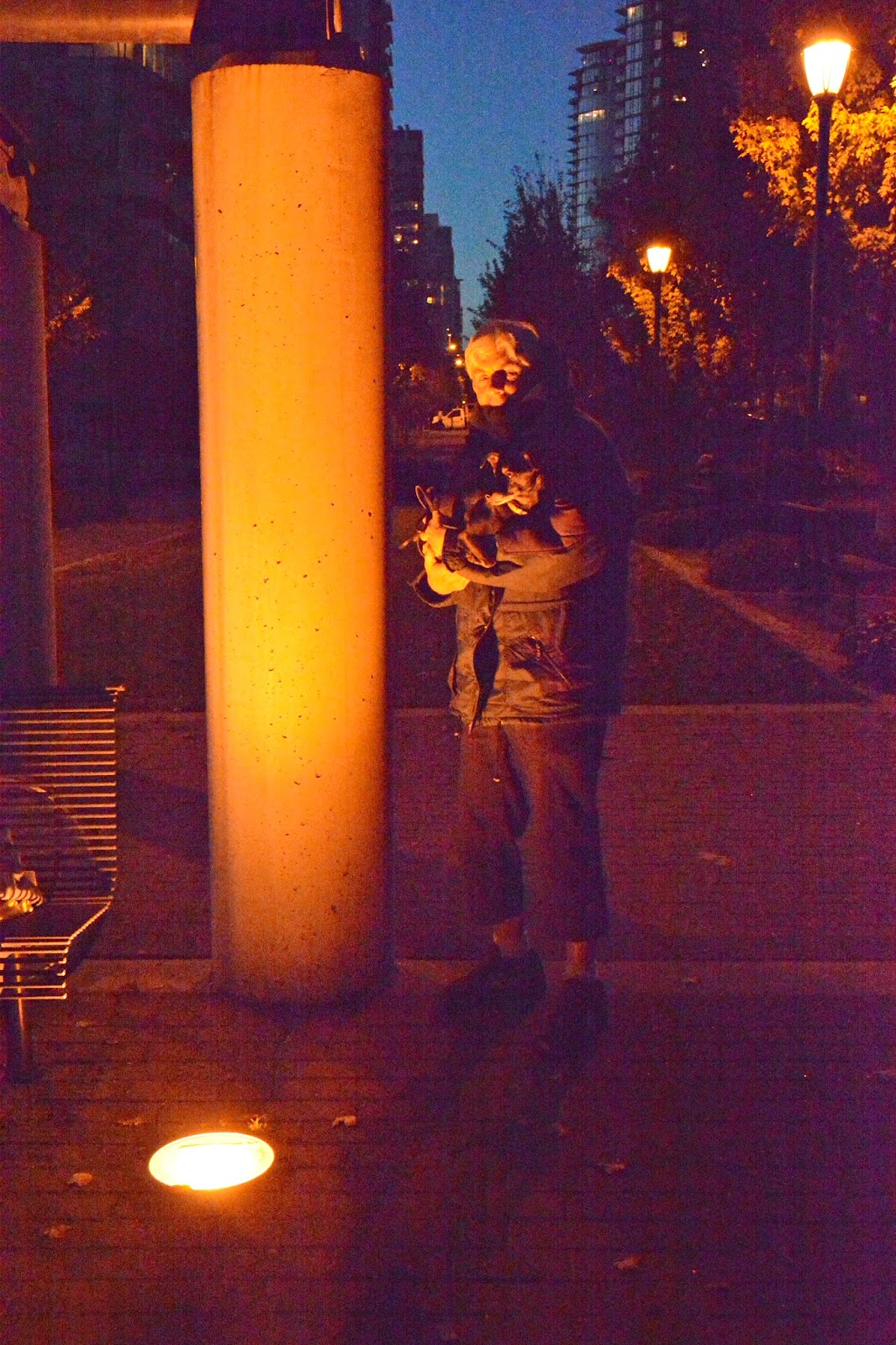 That evening we attended a concert by Novo Ensemble.  I've blogged about Novo before.  This is Marina, a fine cellist and delightful person. 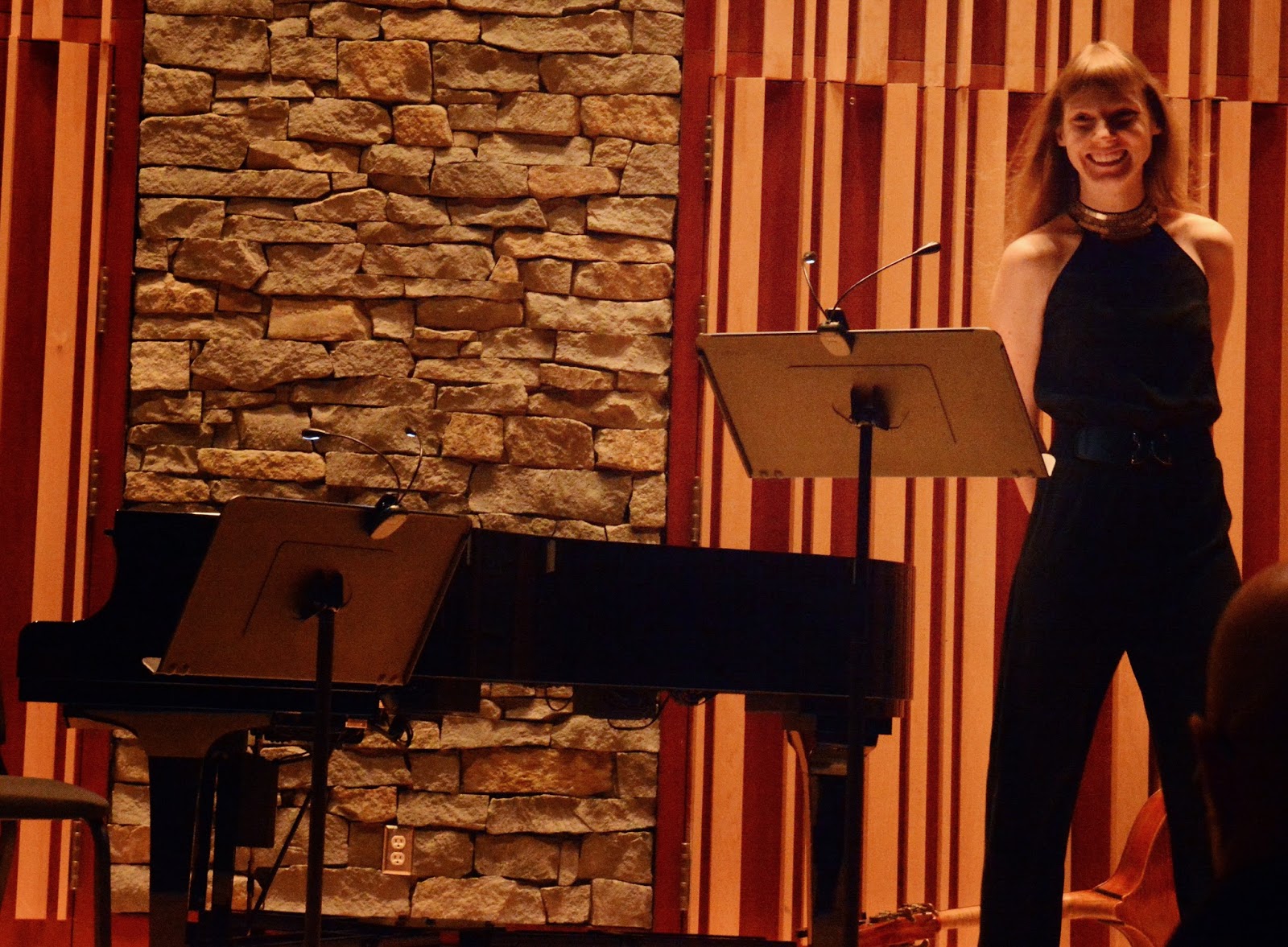 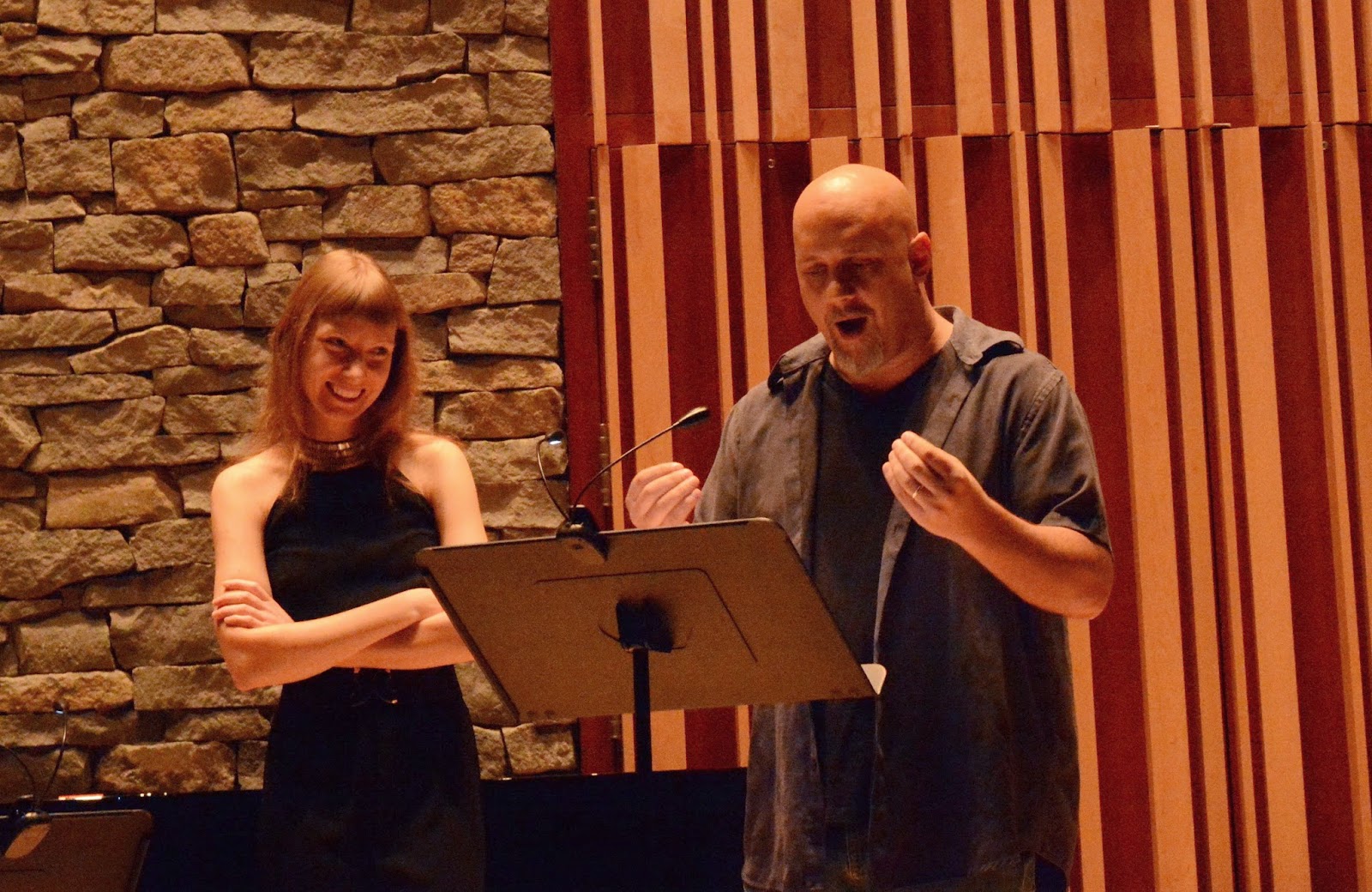 Below, Marina and double bassist, Mark Haney, prepare to perform a work by James Maxwell titled "Nihtscada"(translates as "Nightshade"). 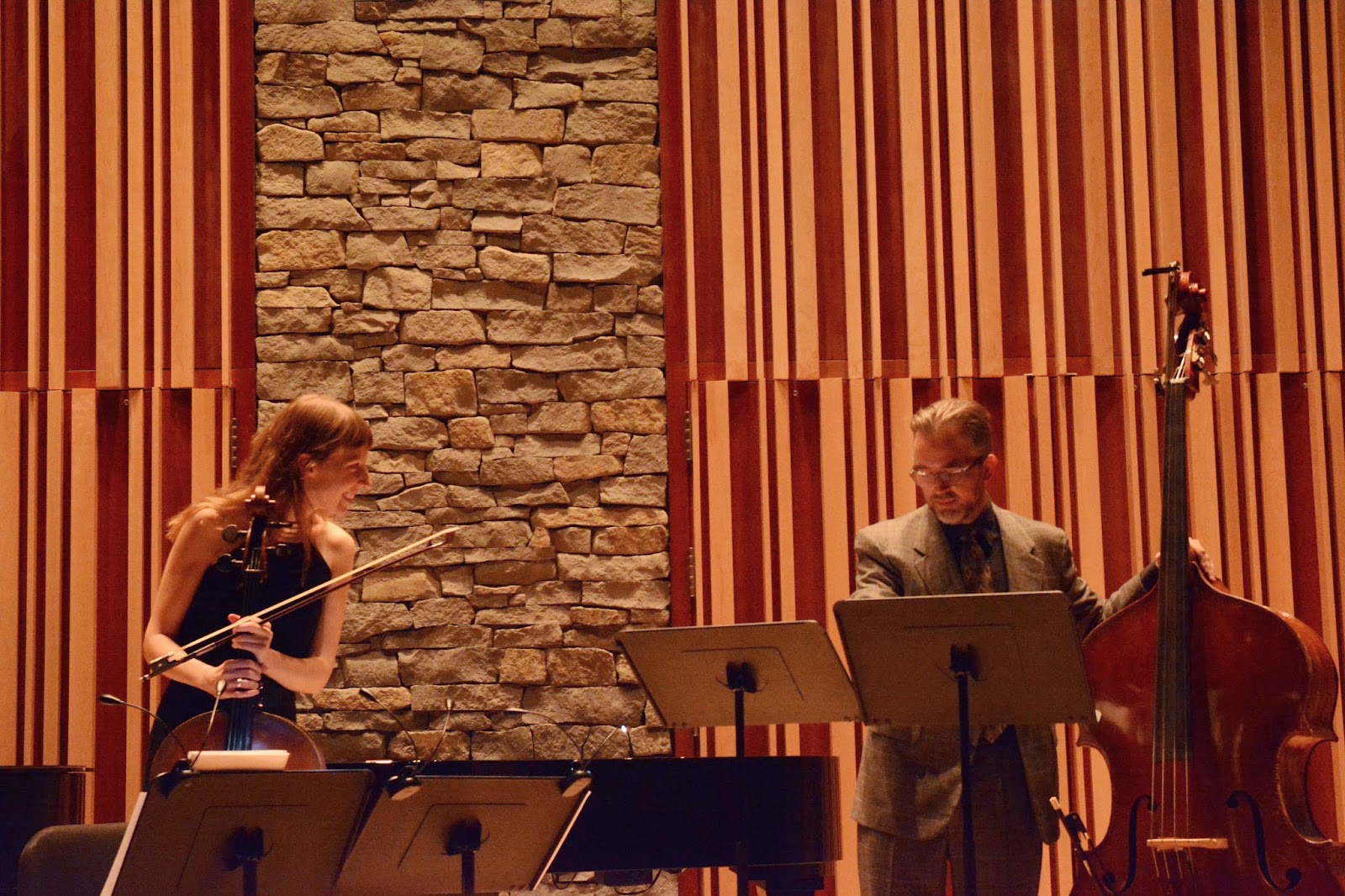 The composer, Mr. Maxwell (on the right), talked of the inspiration and process that led him to write a piece for bass and cello.  It was a first for me to hear this combination of instruments in duo and I loved the warm sonorities and criss-crossing melodies. 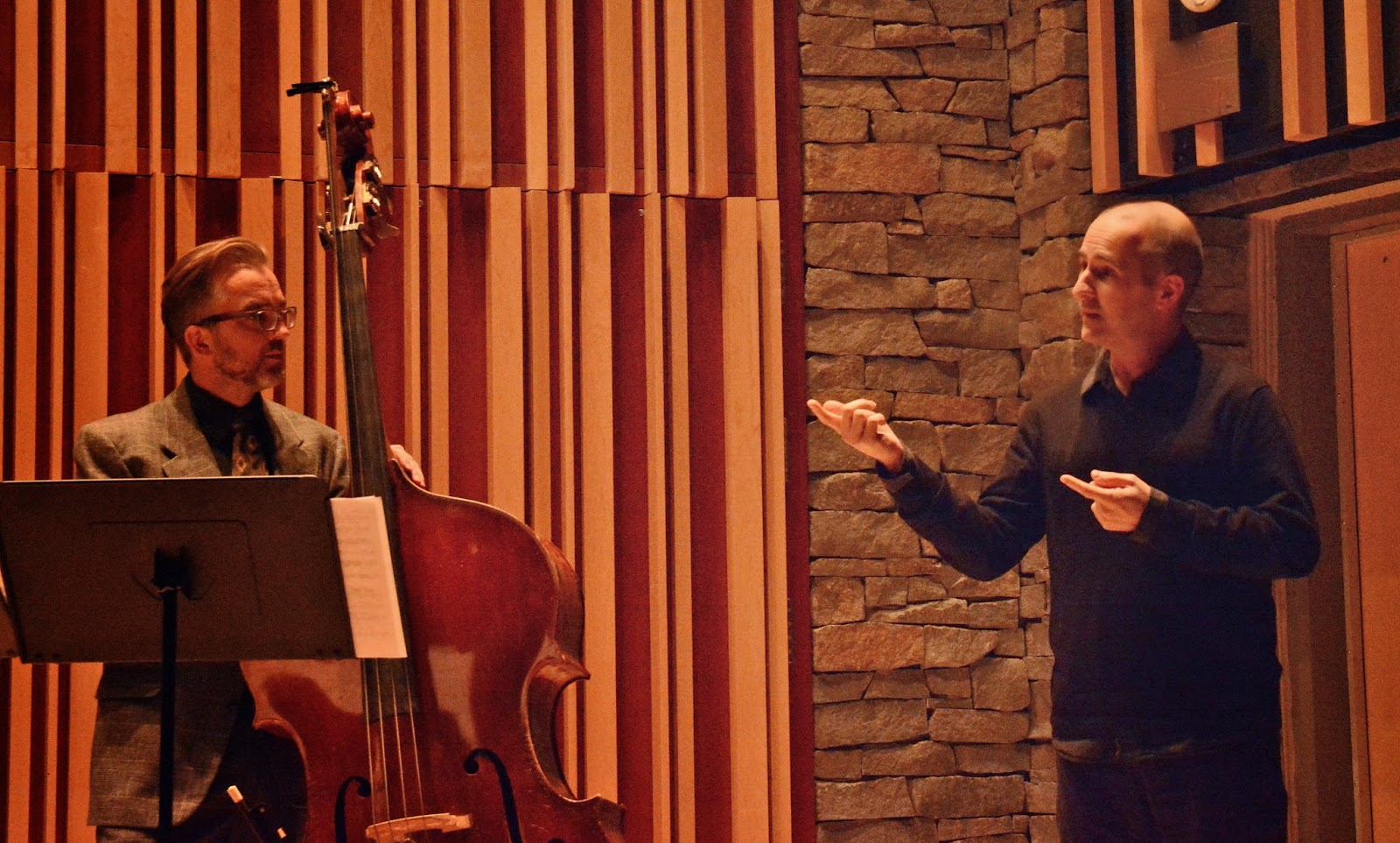 As for Marina, her creative and organizational energy leave me in awe.  A concert such as this with so much to coordinate and so much new music to learn would leave most overwhelmed.  She not only handles the music with what appears to be the greatest of ease, but throughout, her sheer happiness makes you glad to be there. 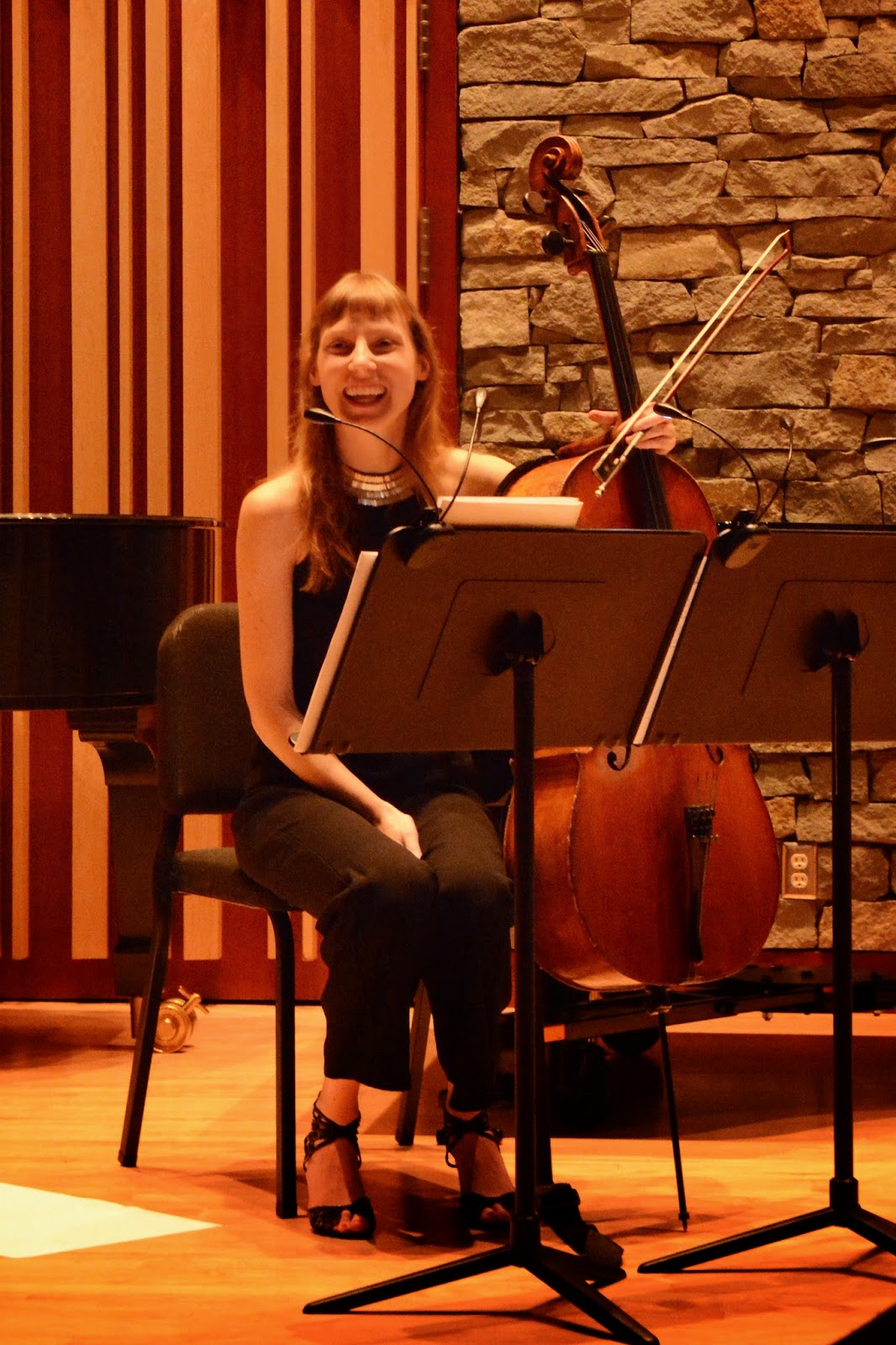 Below, Owen Underhill explains something of his thought process, before the performance of his piece called Ten Miniatures.  Each piece was inspired by Indian Miniature paintings in the tradition of the Mughal period, seen when he visited the National Museum in New Delhi. 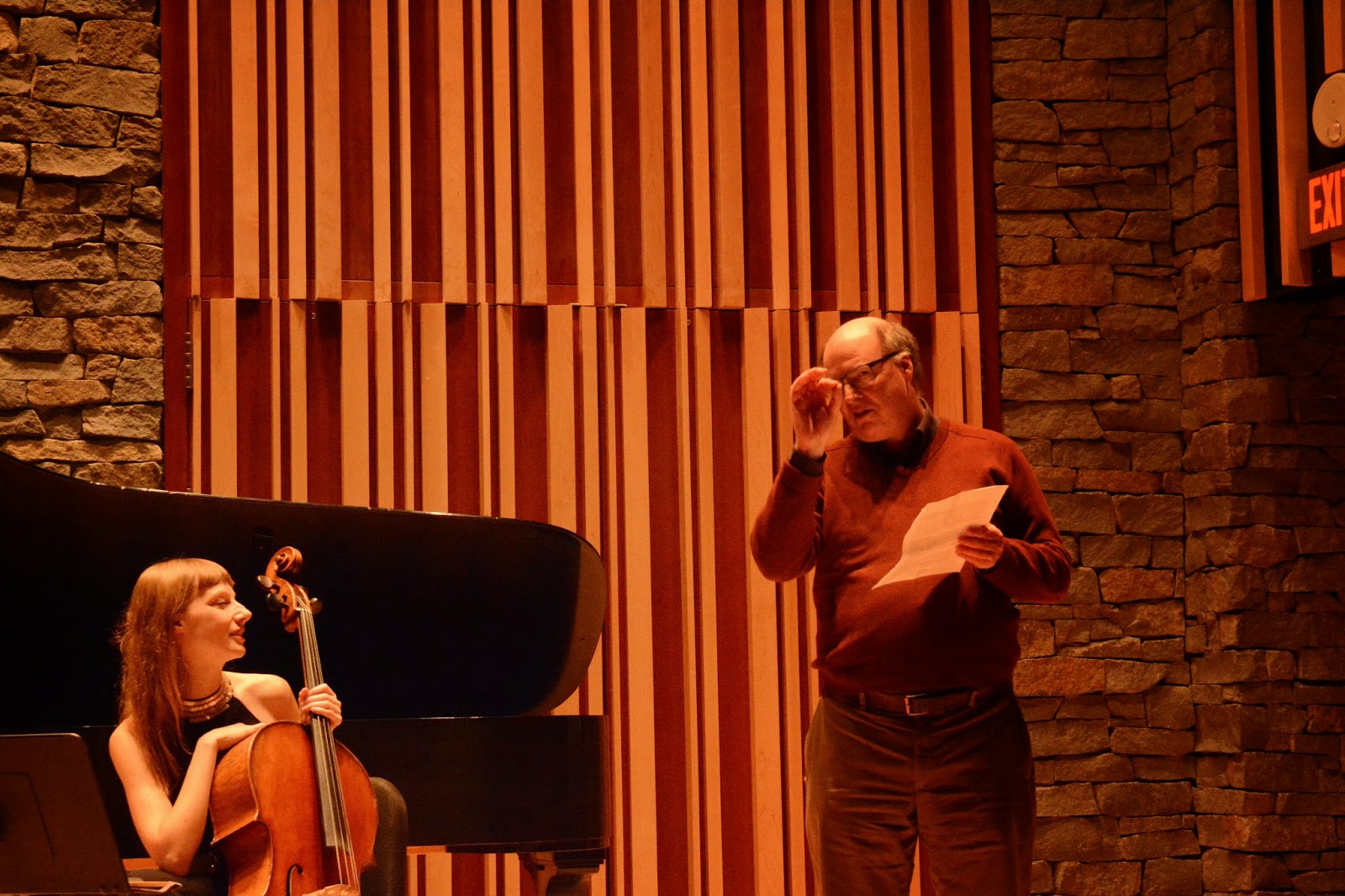 I loved hearing "Ten Miniatures" - each one a minute or so long and each one very different. The ten titles were intriguing and this morning, I visited the New Delhi Museum site and looked at the painting, "Ladies Hunting Tigers".. the only title of the ten that I could find.  The music was wonderful (you can listen to it by clicking on the second piece at this link), and it was interesting to learn that this Kotah miniature represented a popular theme of hunting in medieval paintings, but the idea of setting up tigers to be killed as a way to entertain guests and charm princesses saddens me.  Such a long history of exploitation of animals! 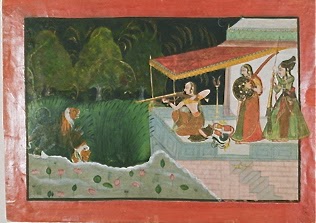 But the performance was breathtaking and no tigers were harmed in the listening :) 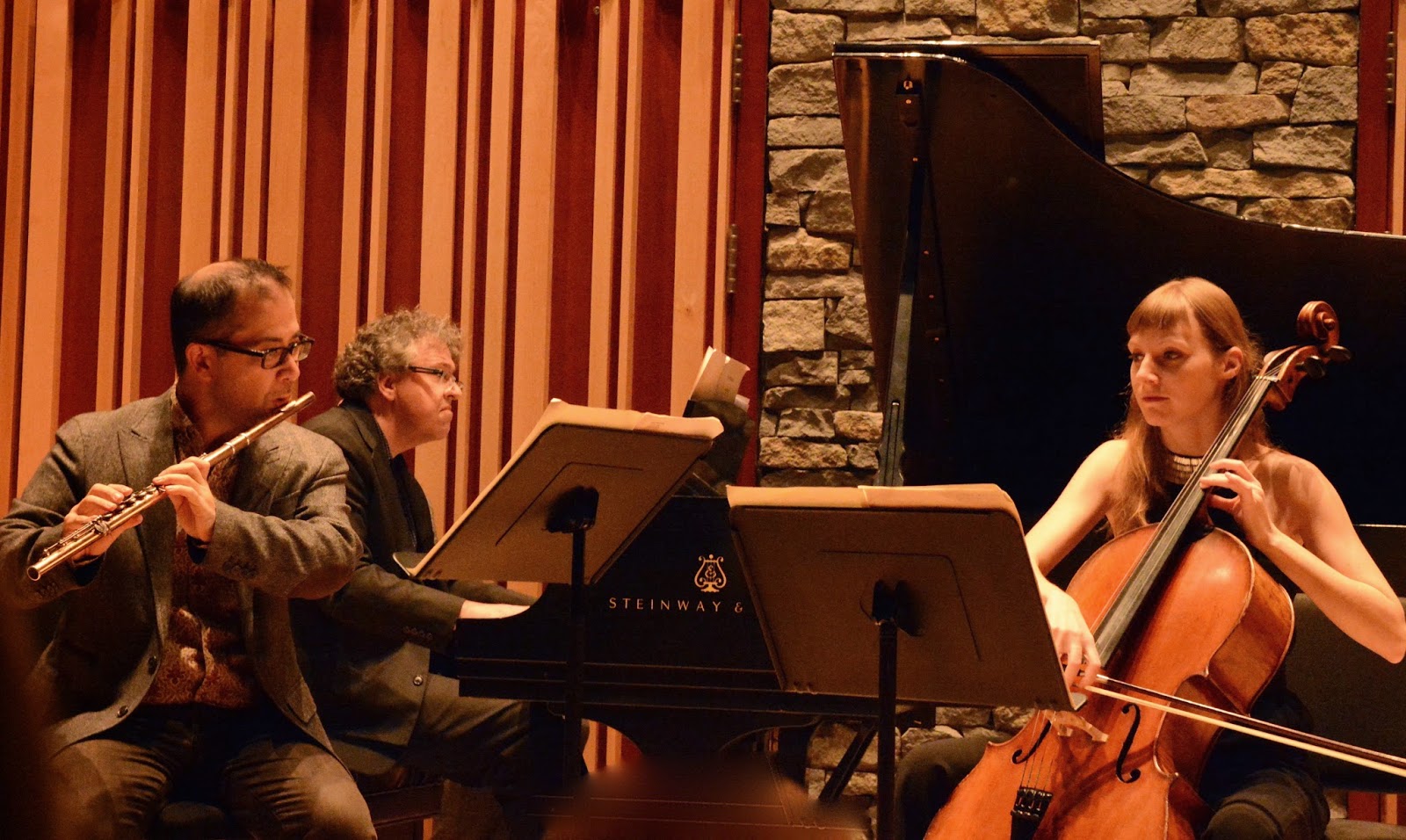 The final bows of appreciative performers receiving warm applause from their listeners. 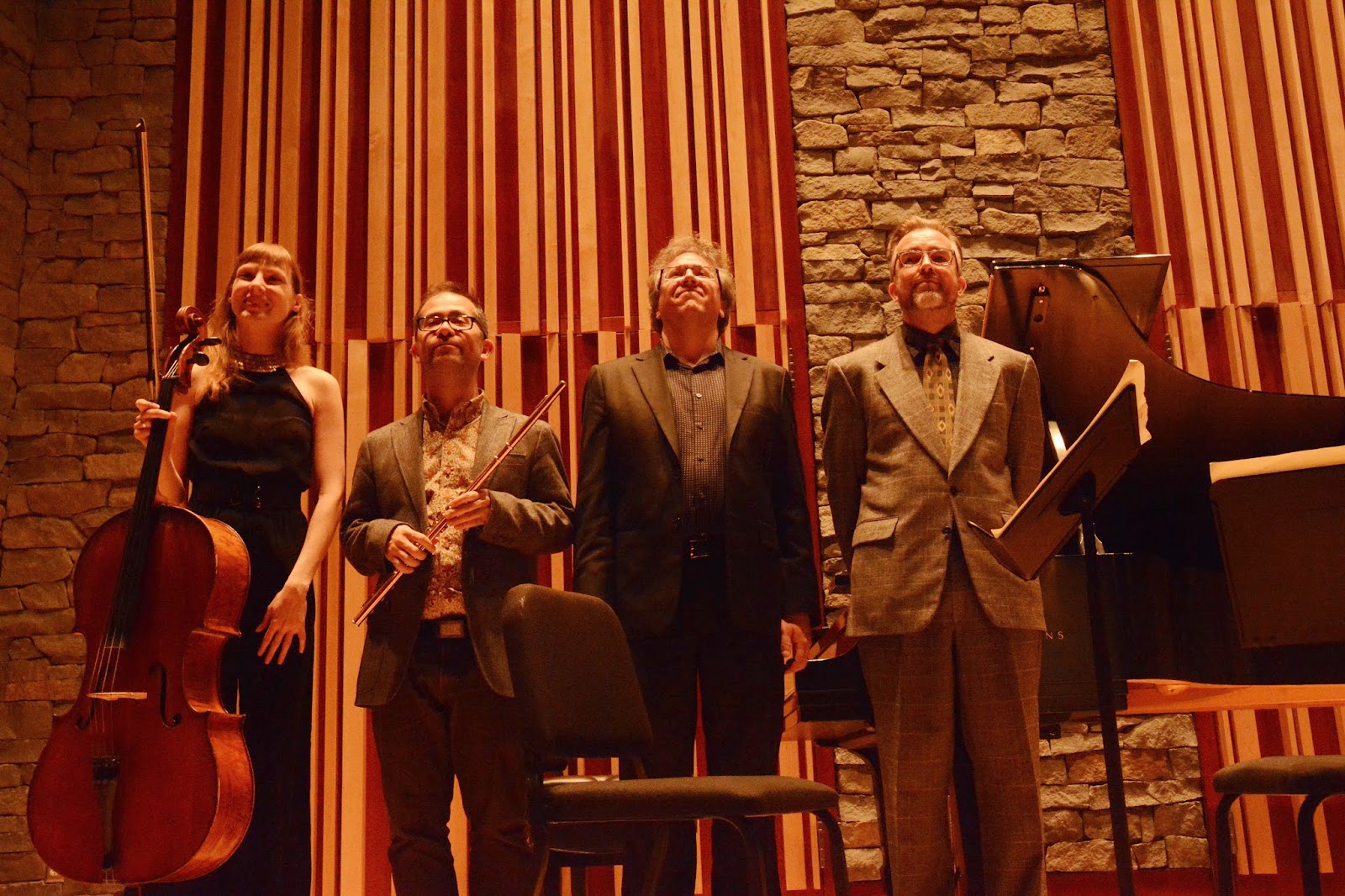 On Sunday morning, I awoke, still basking in the afterglow of the concert.  Black Jack was finding her own glow in the moment :) 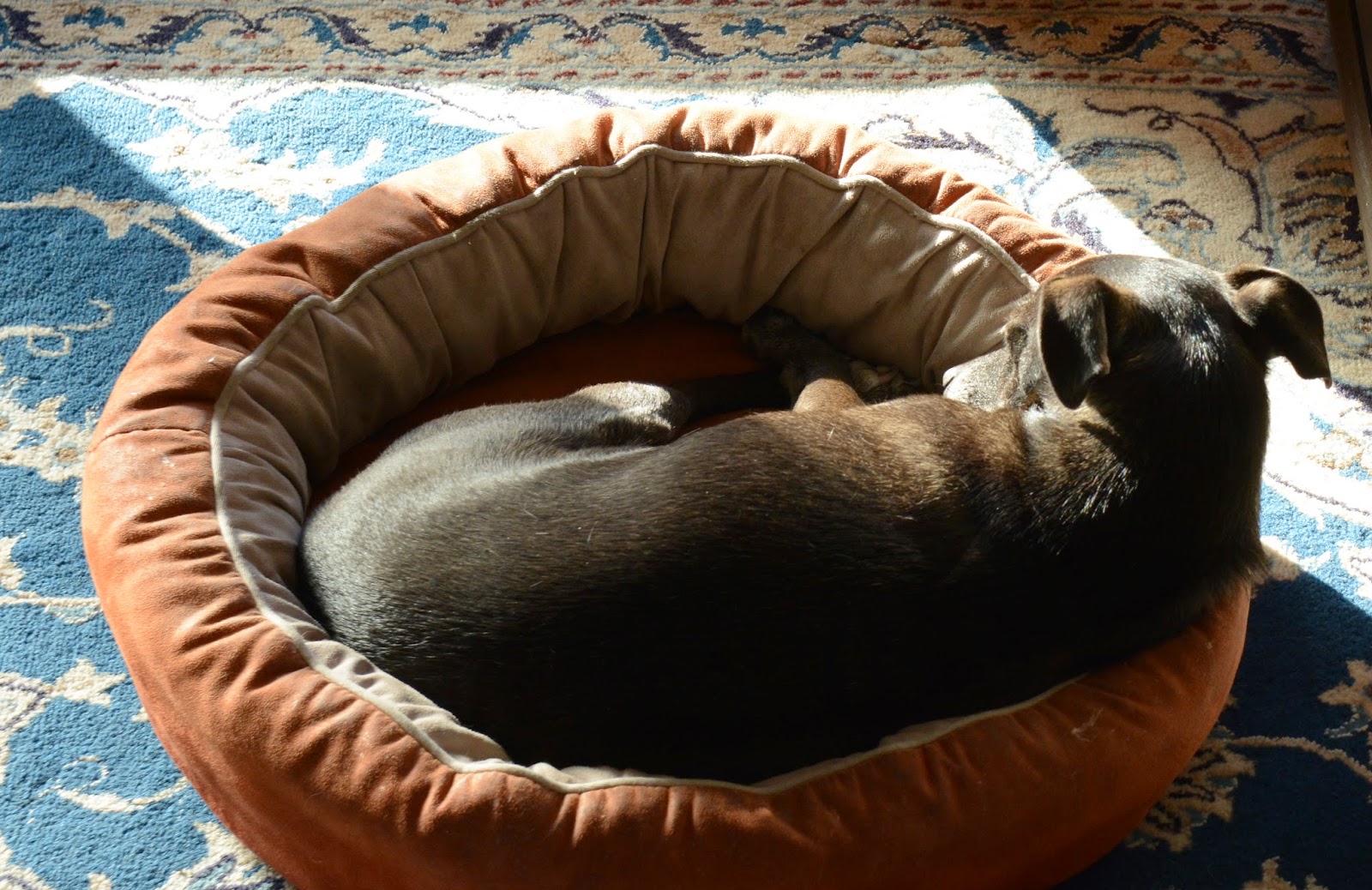 She has several large and plush beds, but this one is used a lot as well. I smiled to see her achieve the perfect angle to receive the sun's warmth against her neck and ear. 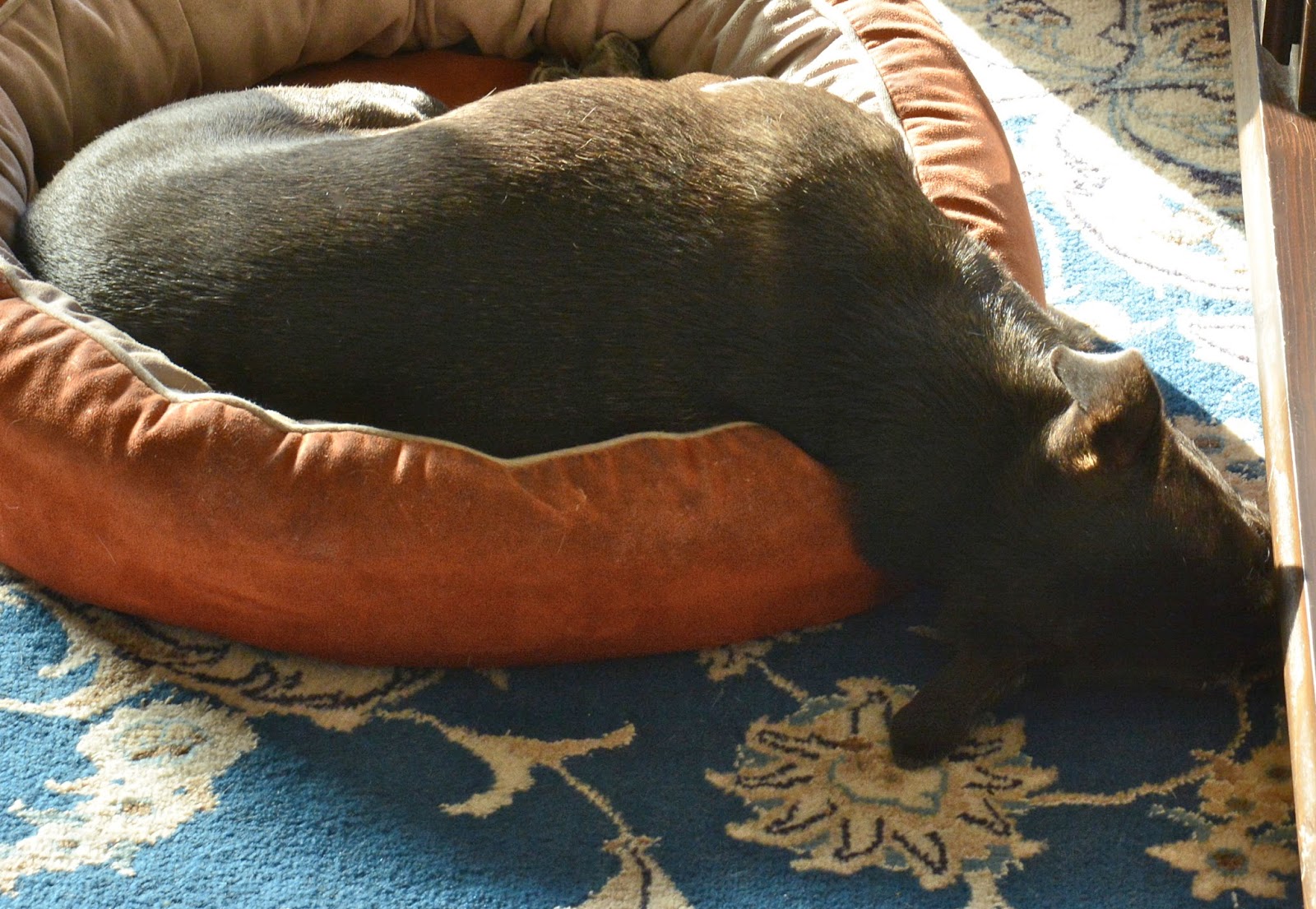 She noticed me right away.. 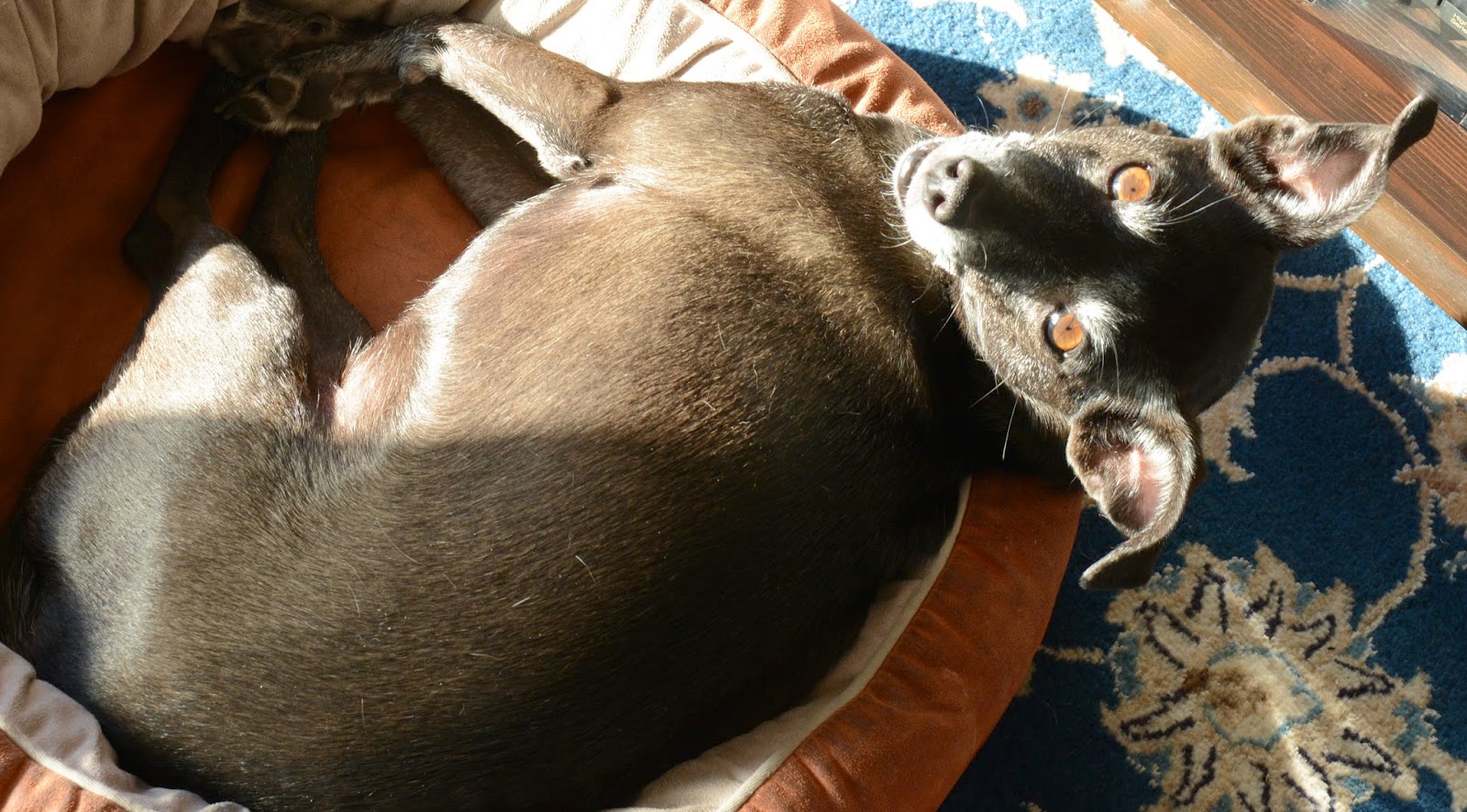 but could barely keep her eyes open. 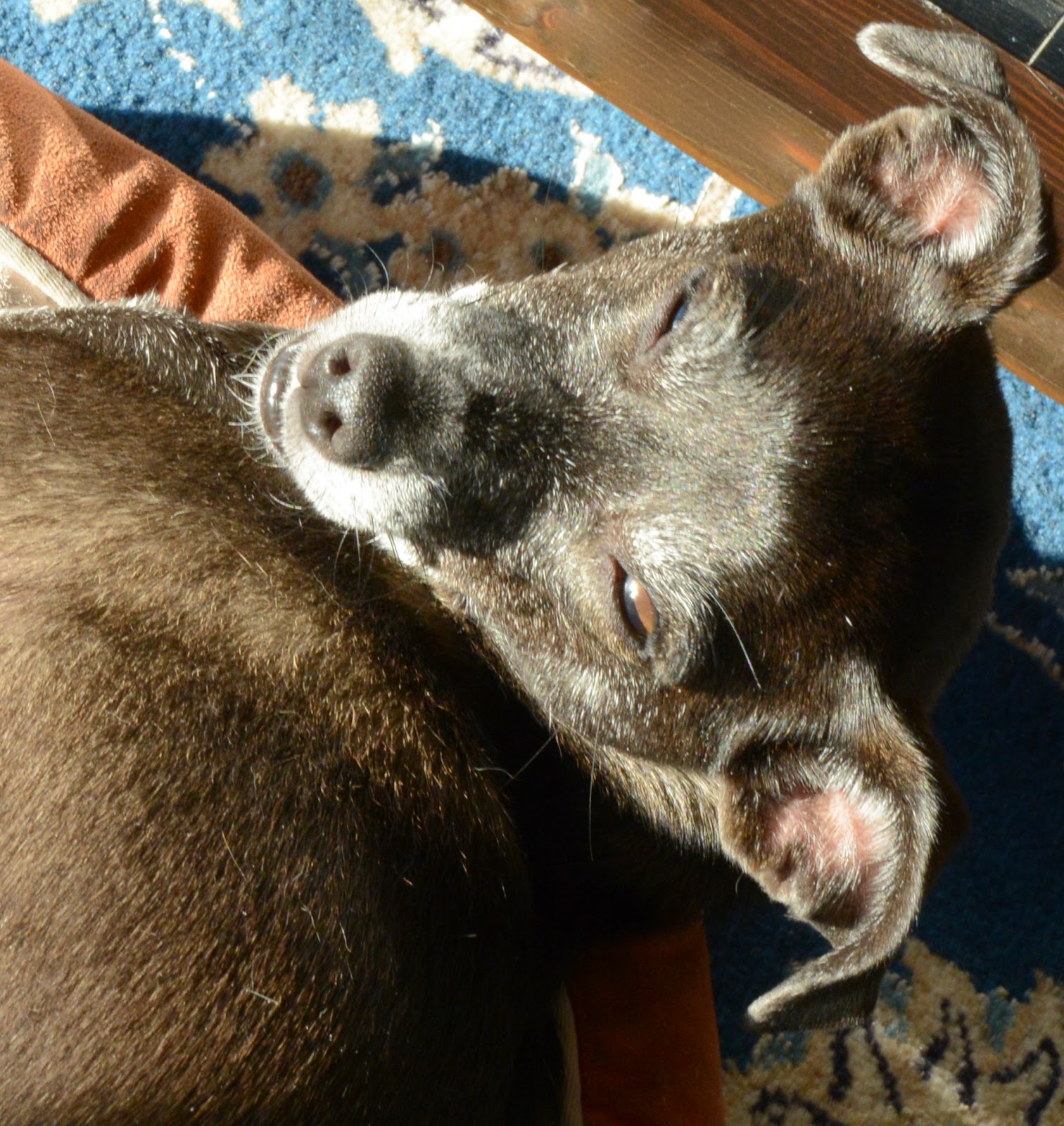 Later, she left her bed to follow the sun spot. Sometimes, there's a chance of a treat after the camera clicks and her sleepy mood was replaced  by suddenly perked up ears here. 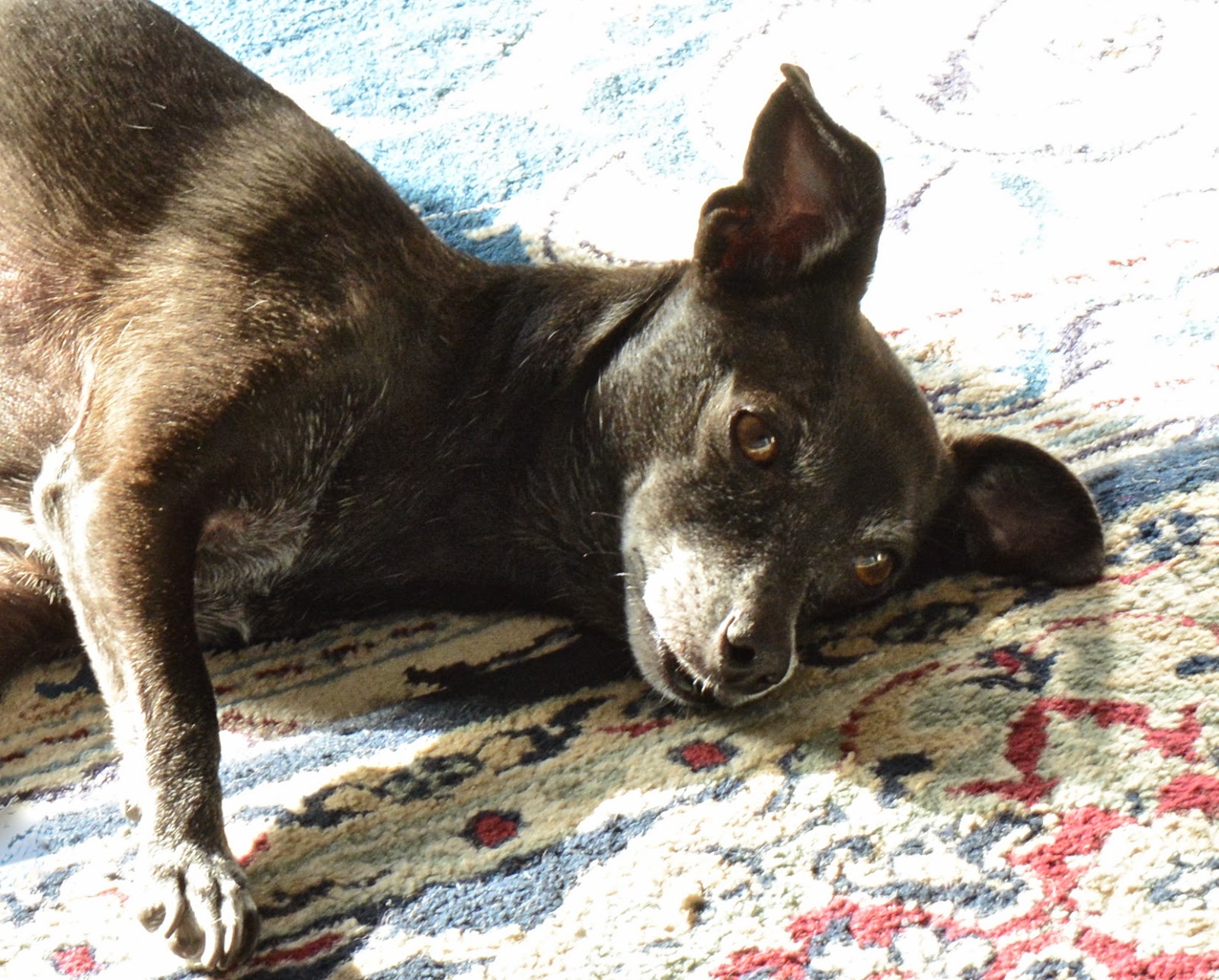 I looked past her and over our balcony to one of the last.. 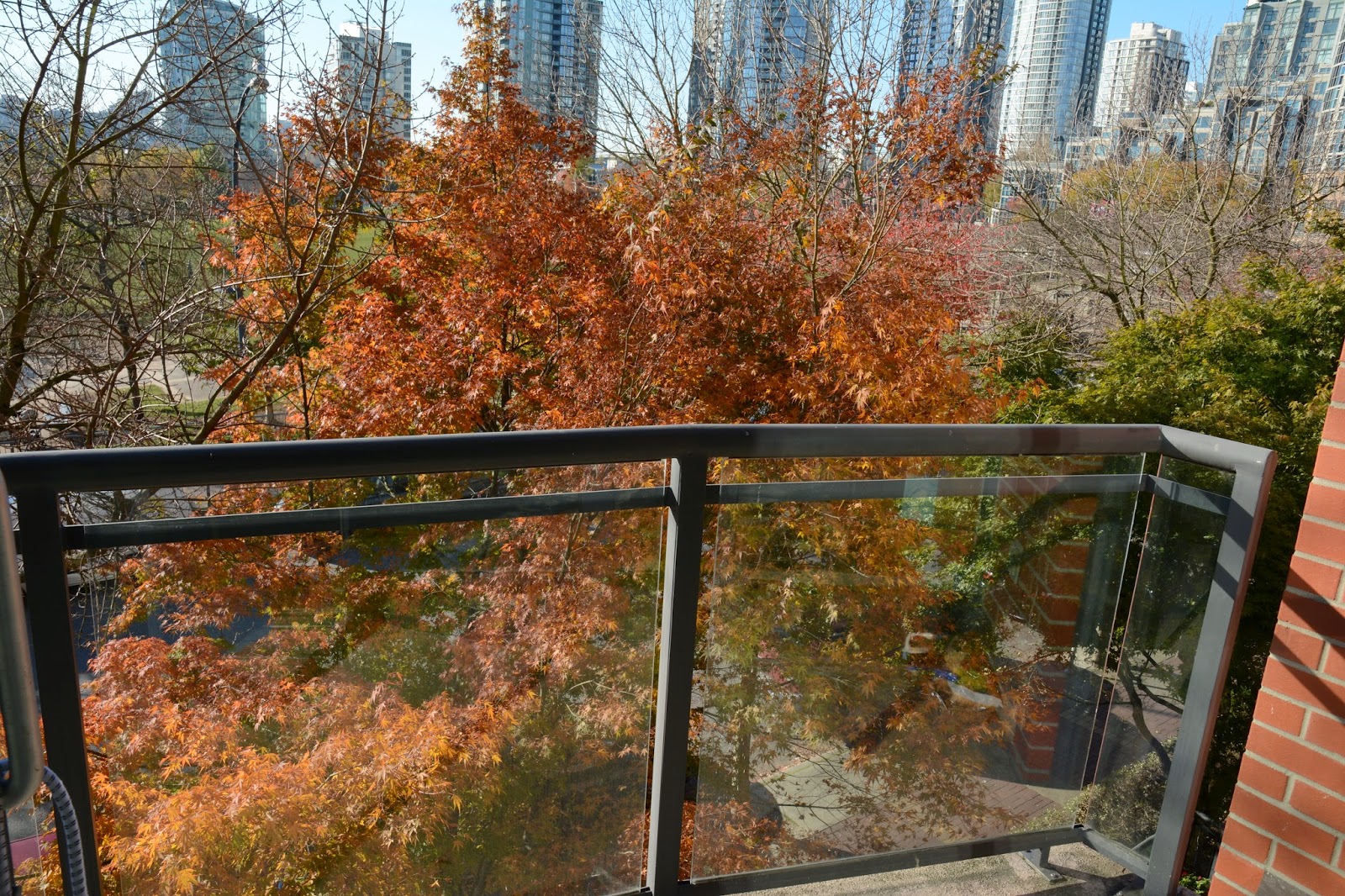 trees on our street with colour. 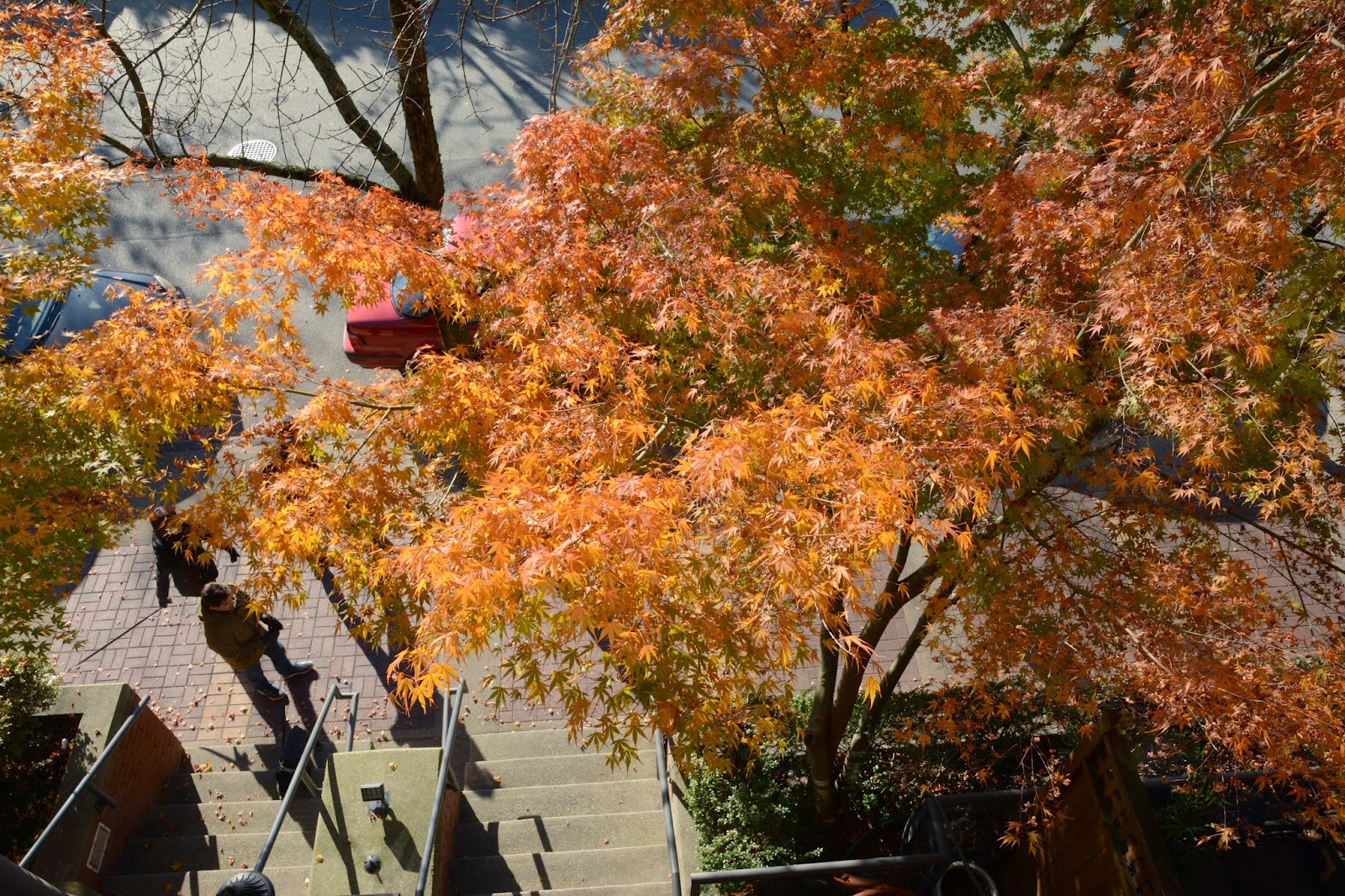 There was great sunshine on Sunday and we enjoyed a short outing on our bikes, though.. 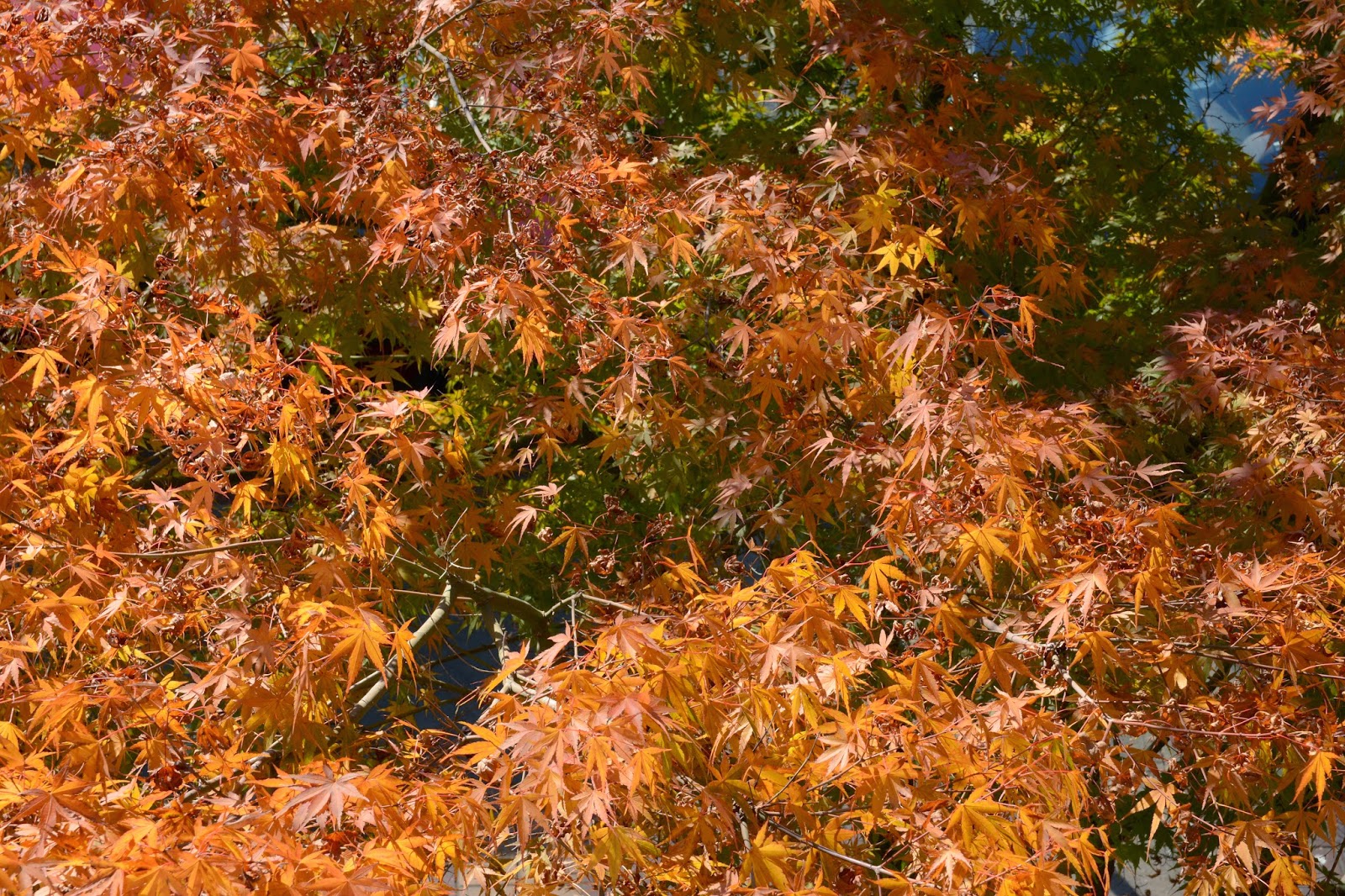 it was quite cold.  This rather dismal looking hallway leads to the bike-room in our building. We had just come back from our outing and as you can see, Black Jack was so cozy in her basket, she didn't even ask to be taken out.  She sure does settle in there for the long term :) 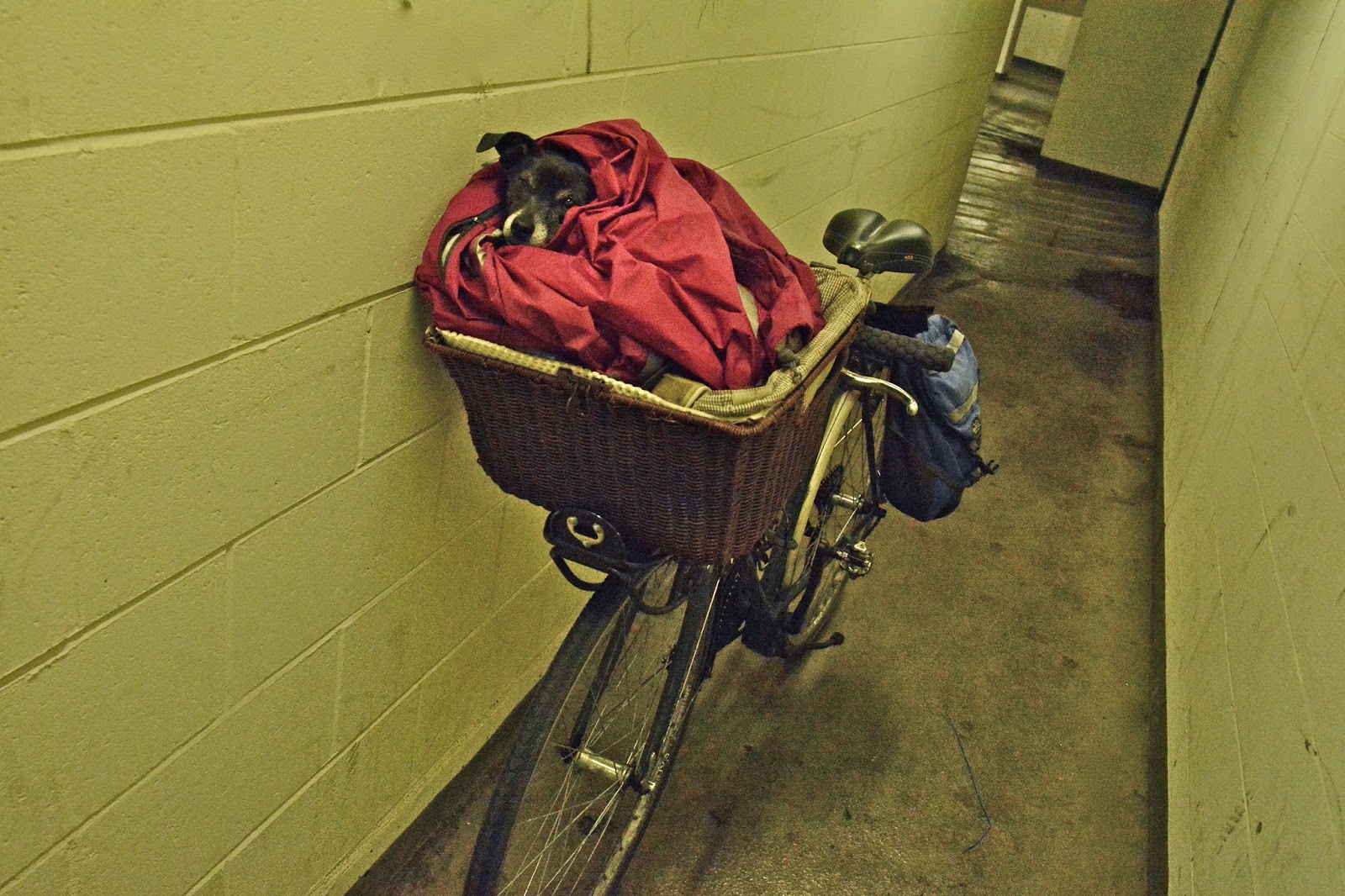 On Monday, both Bill and I had happy adventures.  I rode to UBC for a piano lesson with Bogdan Dulu, a young concert pianist now working to complete his doctorate in music performance.  It was a big deal for me.  I am retired after a long career as a music (band and choir) teacher and it's been years since I took a piano lesson, but my "never too old to learn" philosophy has stood me in good stead, and my goodness it was fun!  I left feeling very grateful to Bogdan for his fine teaching.  It was a longer than usual bike ride for me, and up a big hill that I haven't tackled in a while, so that was a big deal too.  I took Black Jack along in her basket.  (She listened in on the lesson.)  Bill not only encouraged me, but rode his bike to meet me afterwards, listening and asking questions with genuine interest while we ate a late lunch near the university.  That was Bill's first significant ride alone since his illness.  As I said to my sister in a recent email, I can almost hear his brain healing.  We stopped on the way home to give Black Jack a ride in a park we don't often visit.  A nice change. 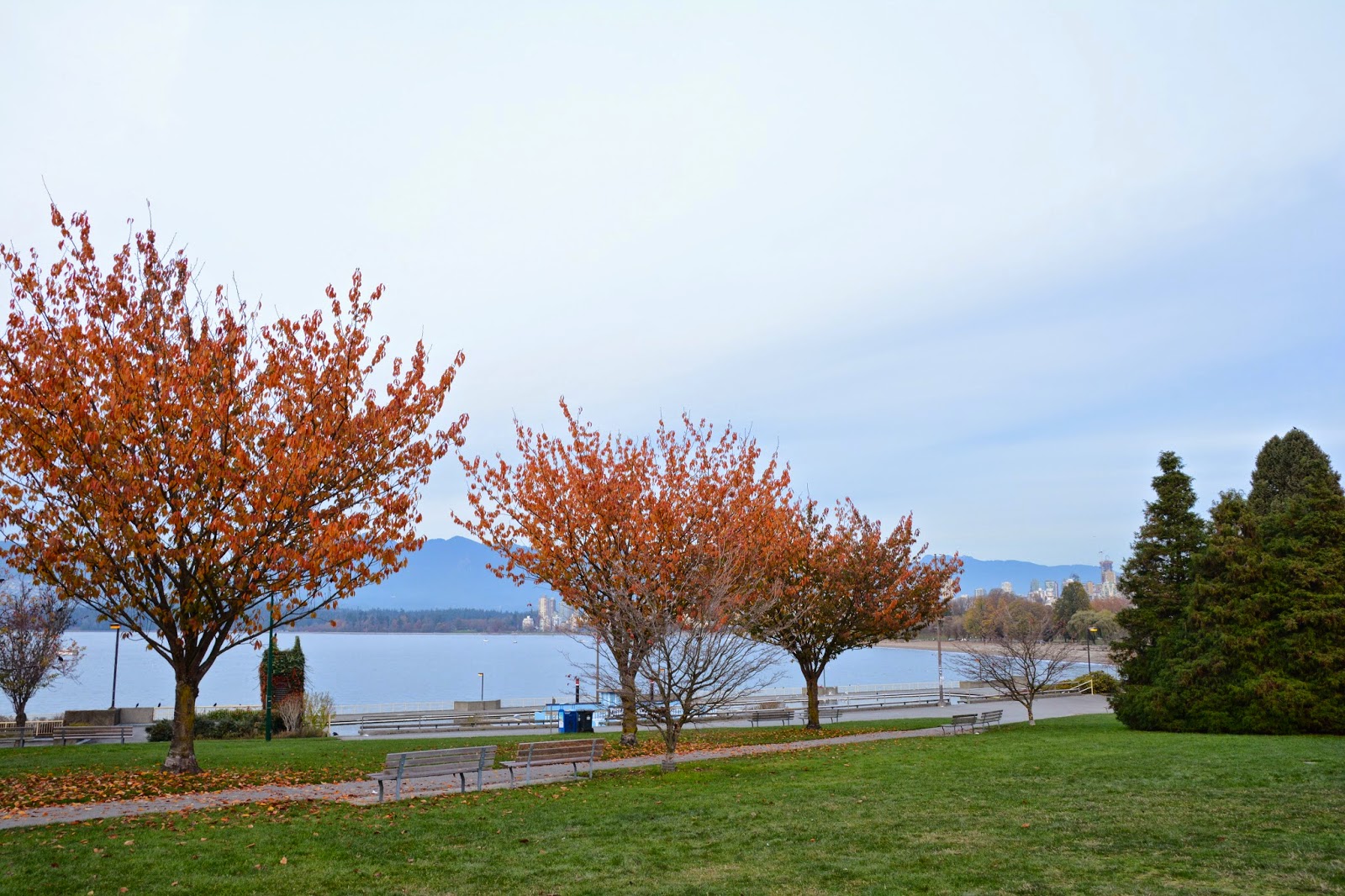 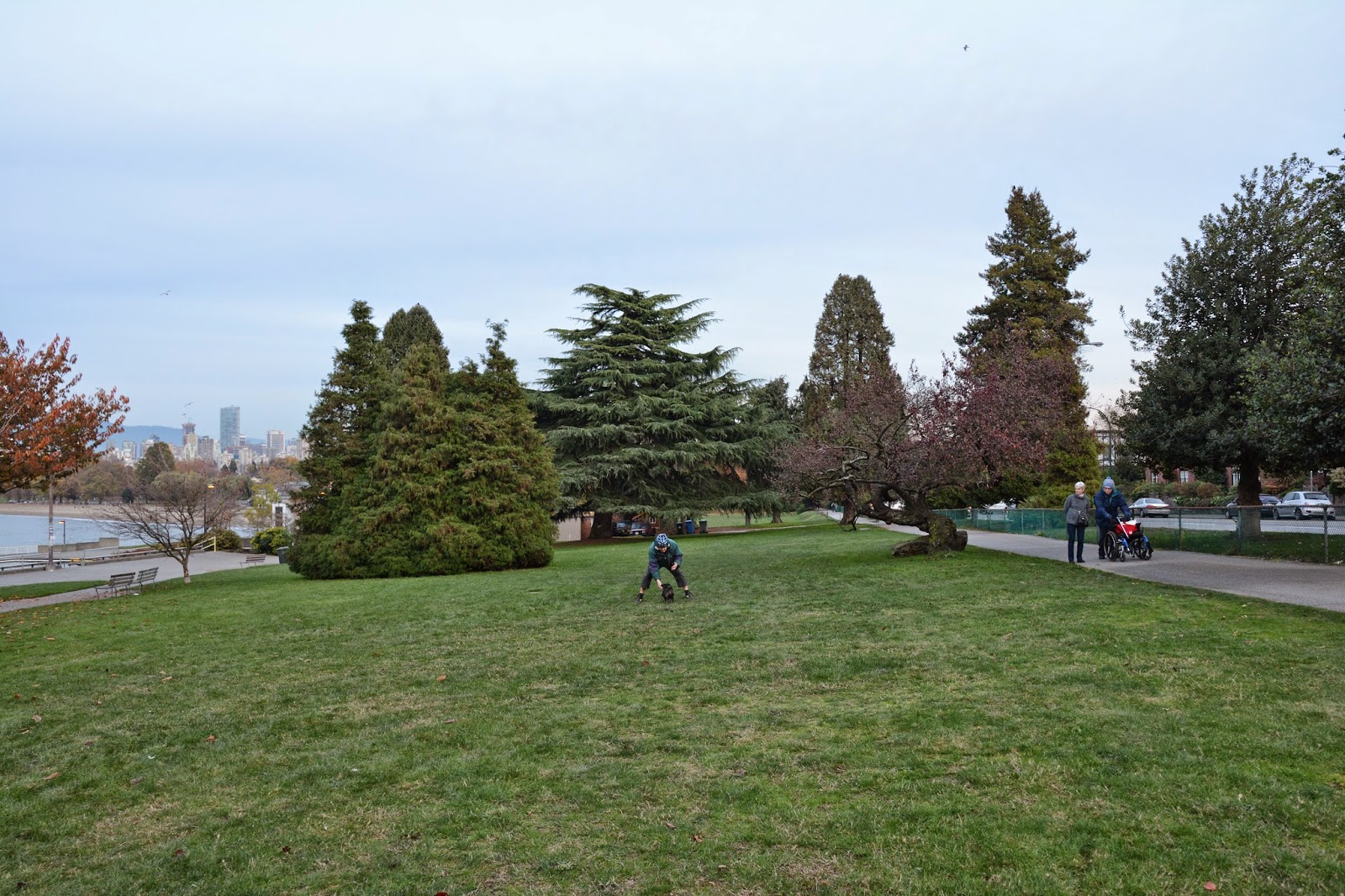 a wonderful day, though.. 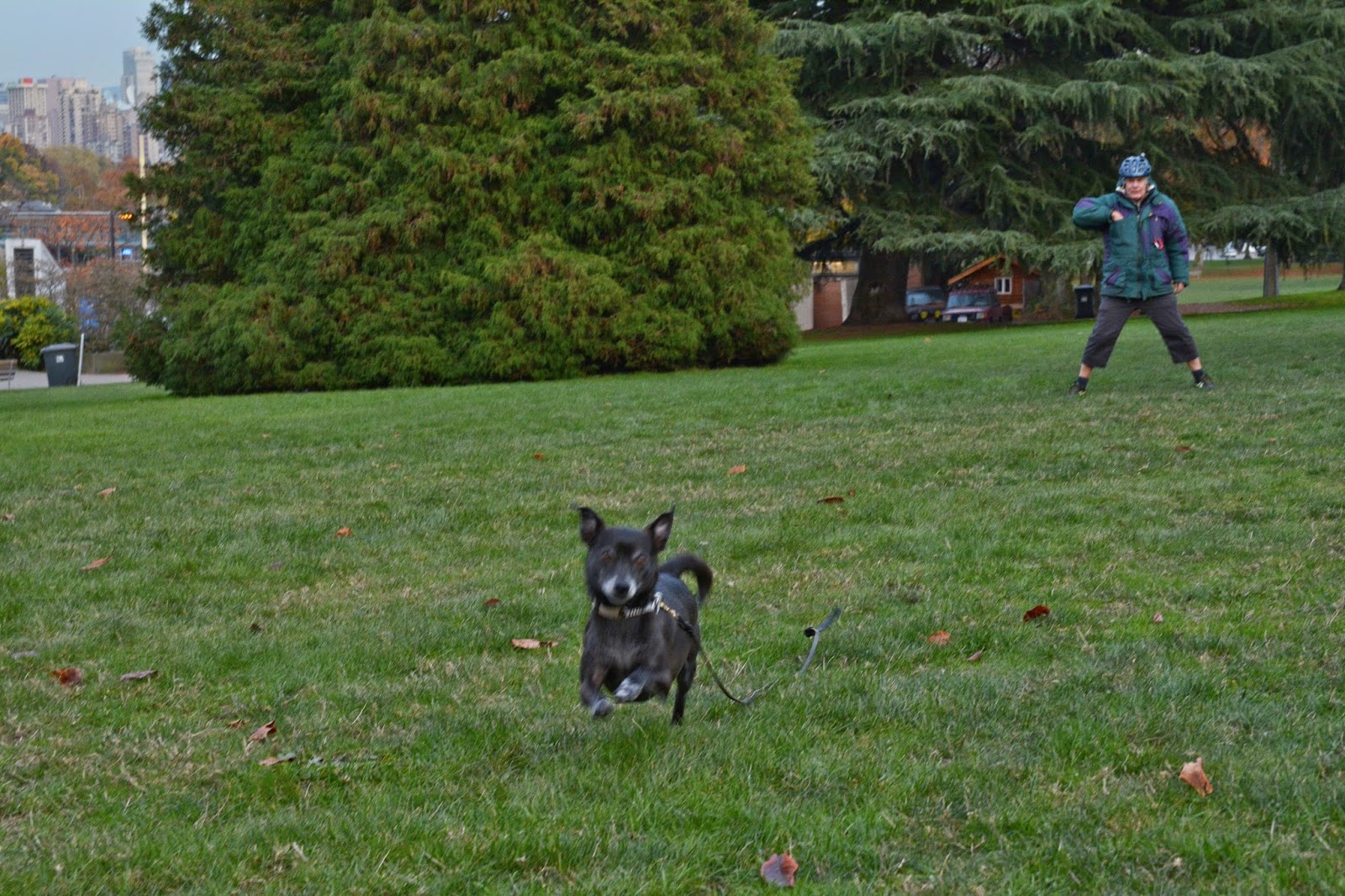 some test shots with my newly repaired lens revealed that its problem has not been solved. 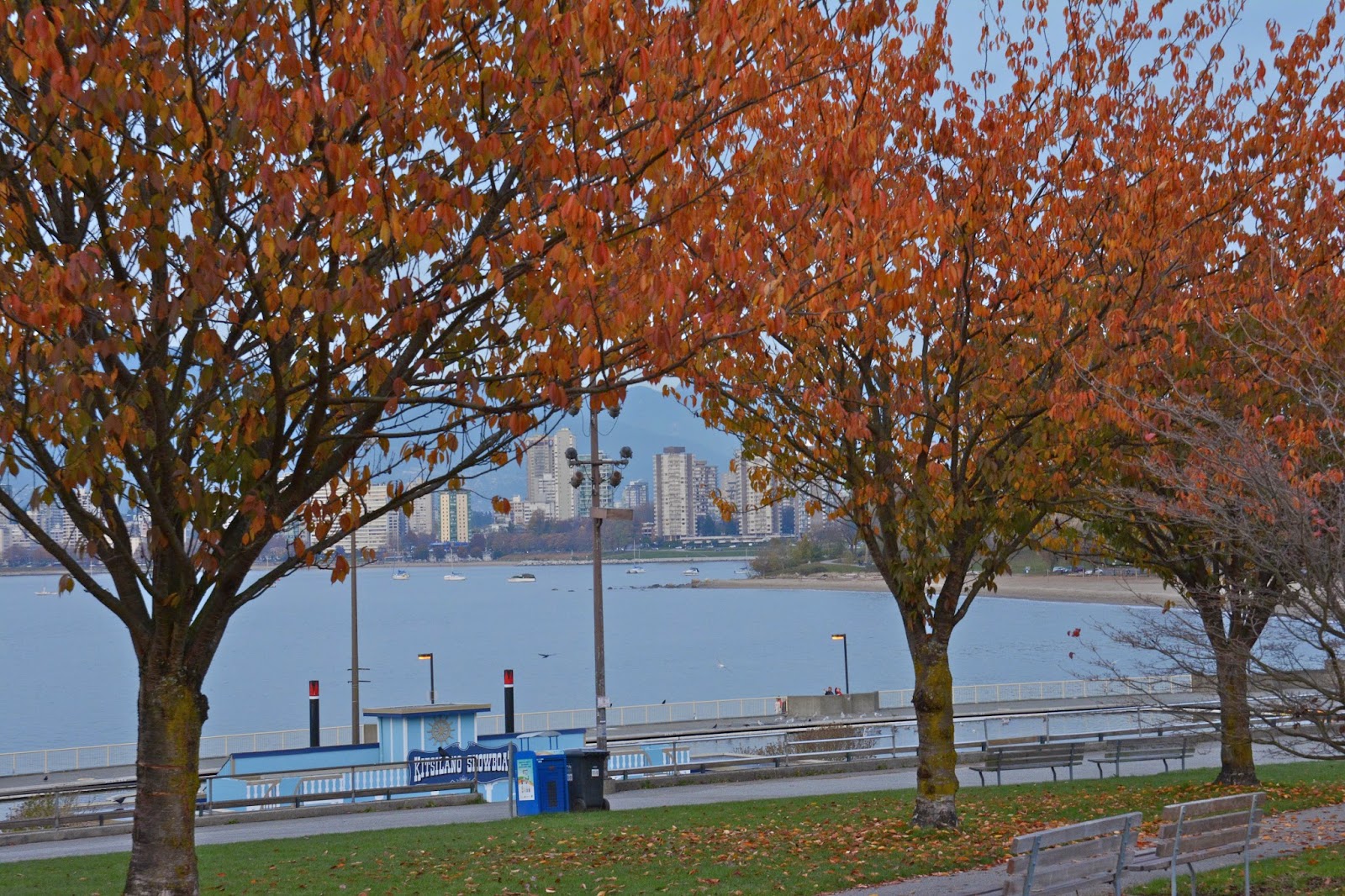 Another trip to the camera store is, unfortunately, in the offing.  In the mean time, here are my out of focus but still beautiful Bill and Black Jack.  The three of us thank you for stopping by to share in our world.  If you have the time, a click on Our World Tuesday (yes, I'm a day late) will take you to many other events in the lives of people from around the world.  A very happy Wednesday to each one of you! 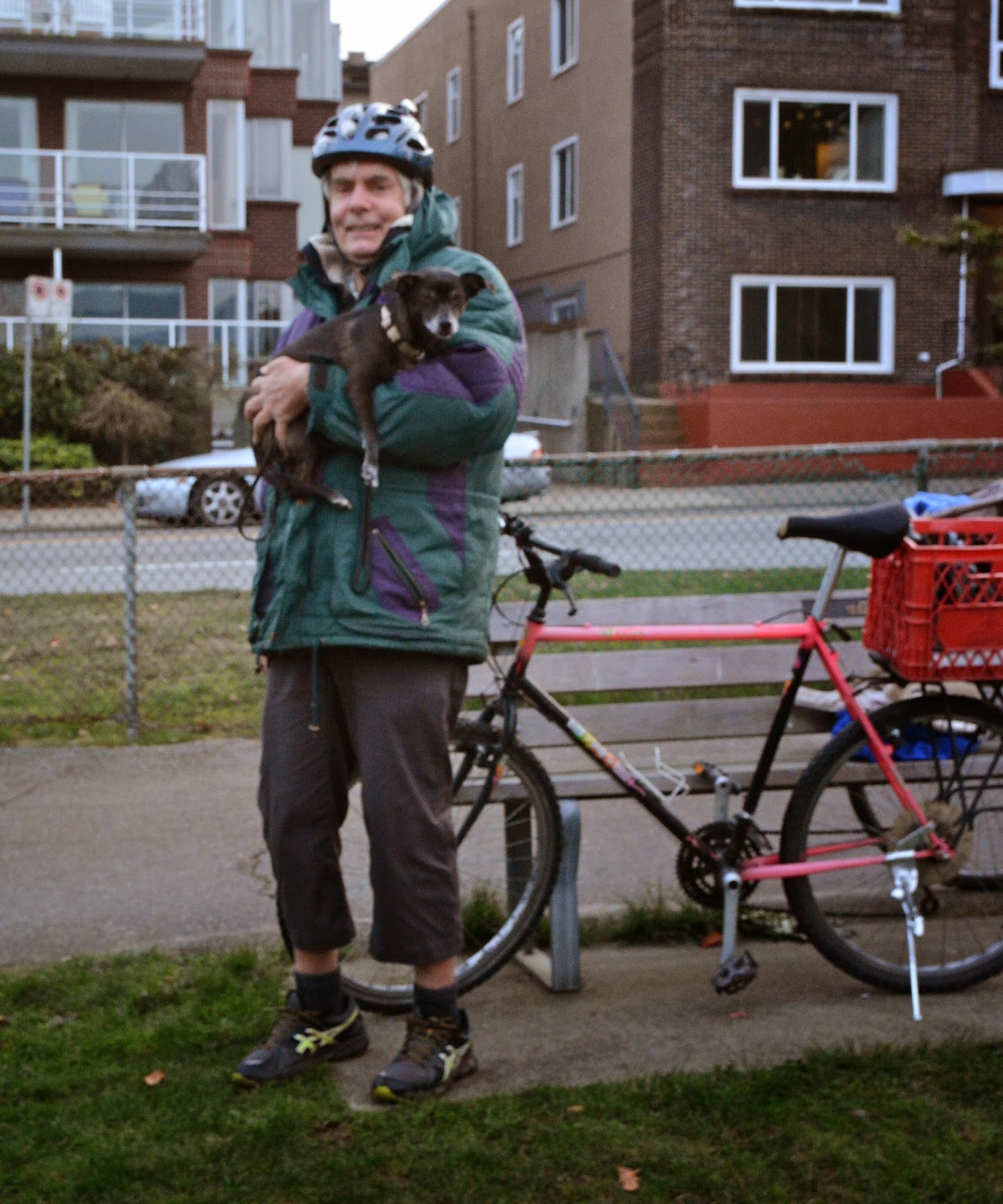