A few real and imagined critters and a question for BC residents.

Does this count as a critter? 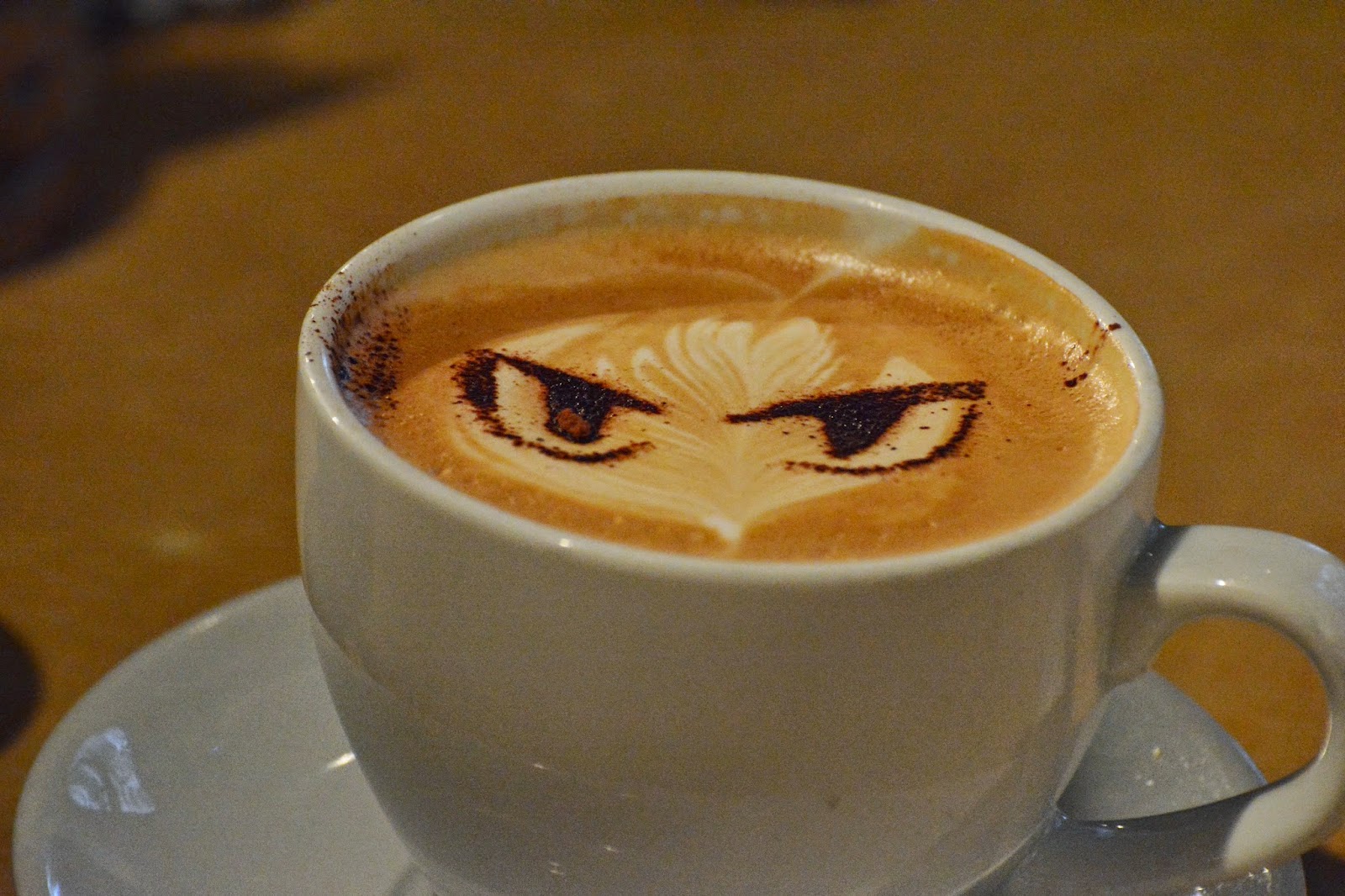 It was made yesterday by Jennifer, of Harrison Galleries.  We arrived later than usual, only a half hour before closing time.  As busy as I know she had been all day, she still greeted us with a big smile and even moved into.. 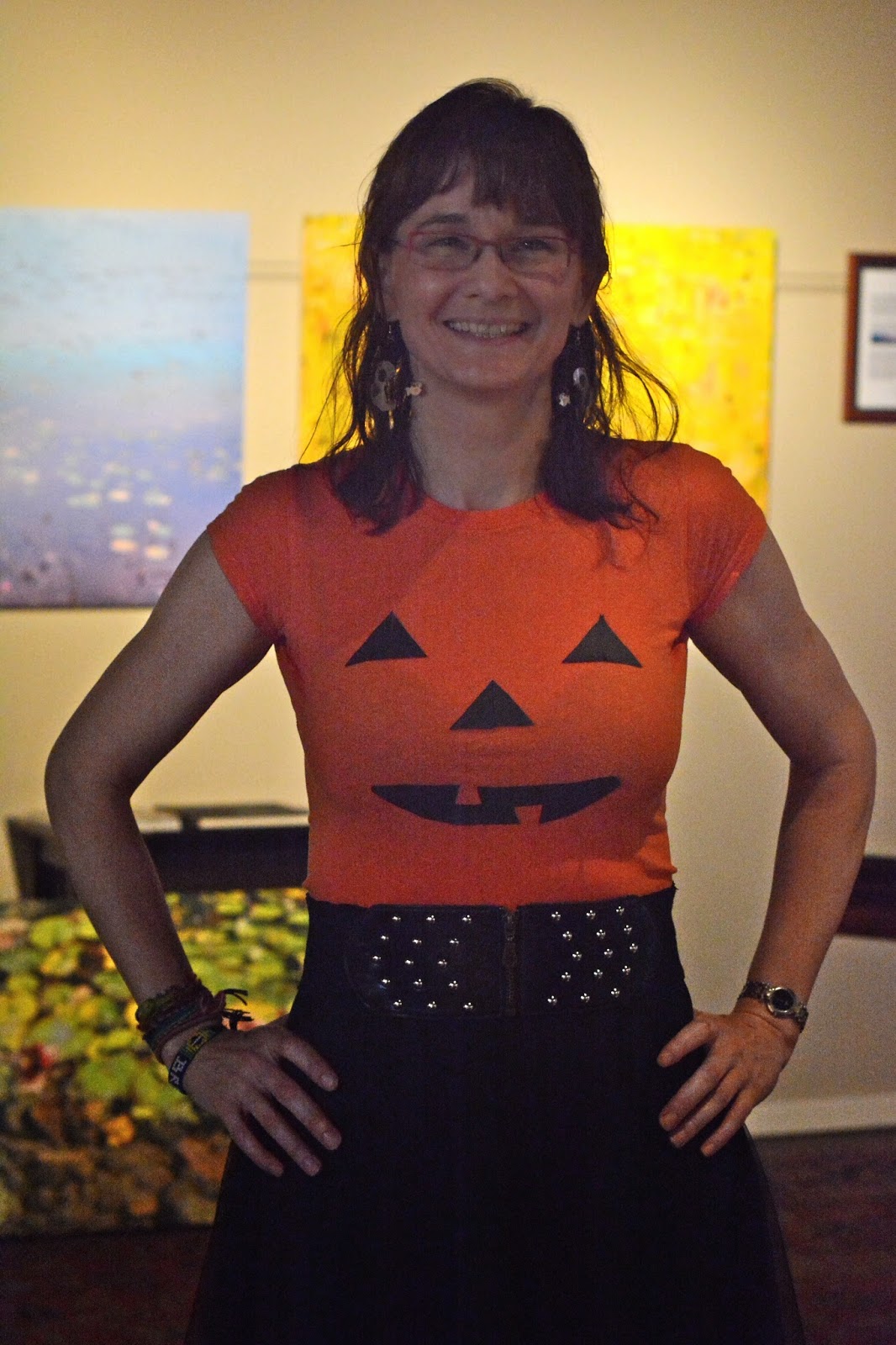 the light so that I could do a better job of capturing that smile (and costume)!  She's a winner! 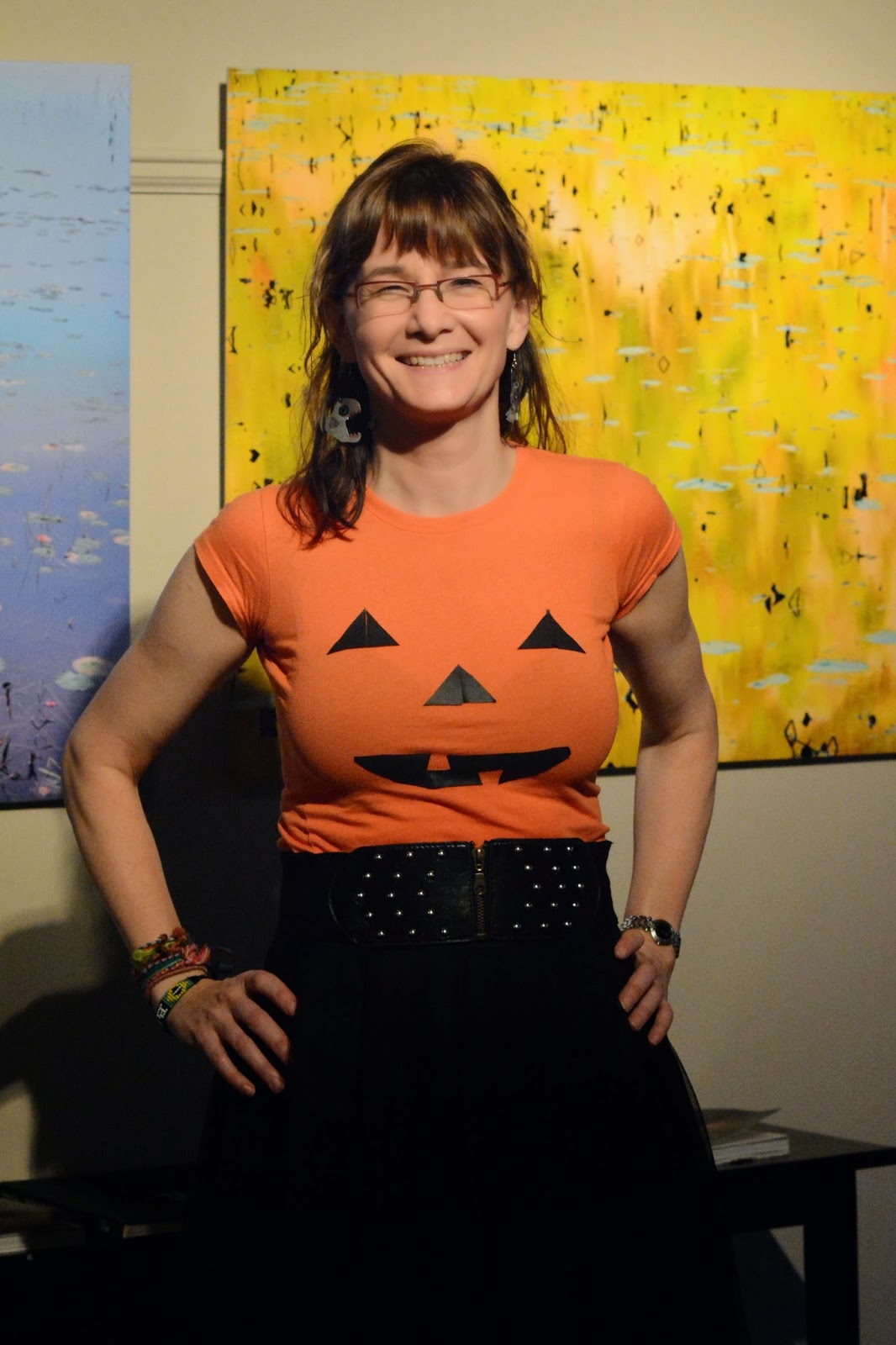 But, it's Saturday, and I'm way late to join Eileen's Saturday's Critters meme.  Our critter sightings were few and far between yesterday but I'm hoping she will be okay with pictures of Black Jack (again), some of the seagulls we saw along our bike route and a few that rise from my imagination.  If you don't know about her meme, it's a fine one..  well worth a trip across Blogland to check it out.

But, before that, if you live in British Columbia, I have a question for you. Do you appreciate Halloween fireworks (whistle, sizzle and lights) and firecrackers (very loud bangs)? A comment would be great, but if you have no time for long explanations, a simple "yes" if you like them and "no" if you wish they were banned would be much appreciated.

Bill stopped as we rode along English Bay yesterday.  This sculpture had appeared overnight.  I think the curvy critter resting on top of the horizontal branch looks rather like a critter.  Here s/he is underexposed, 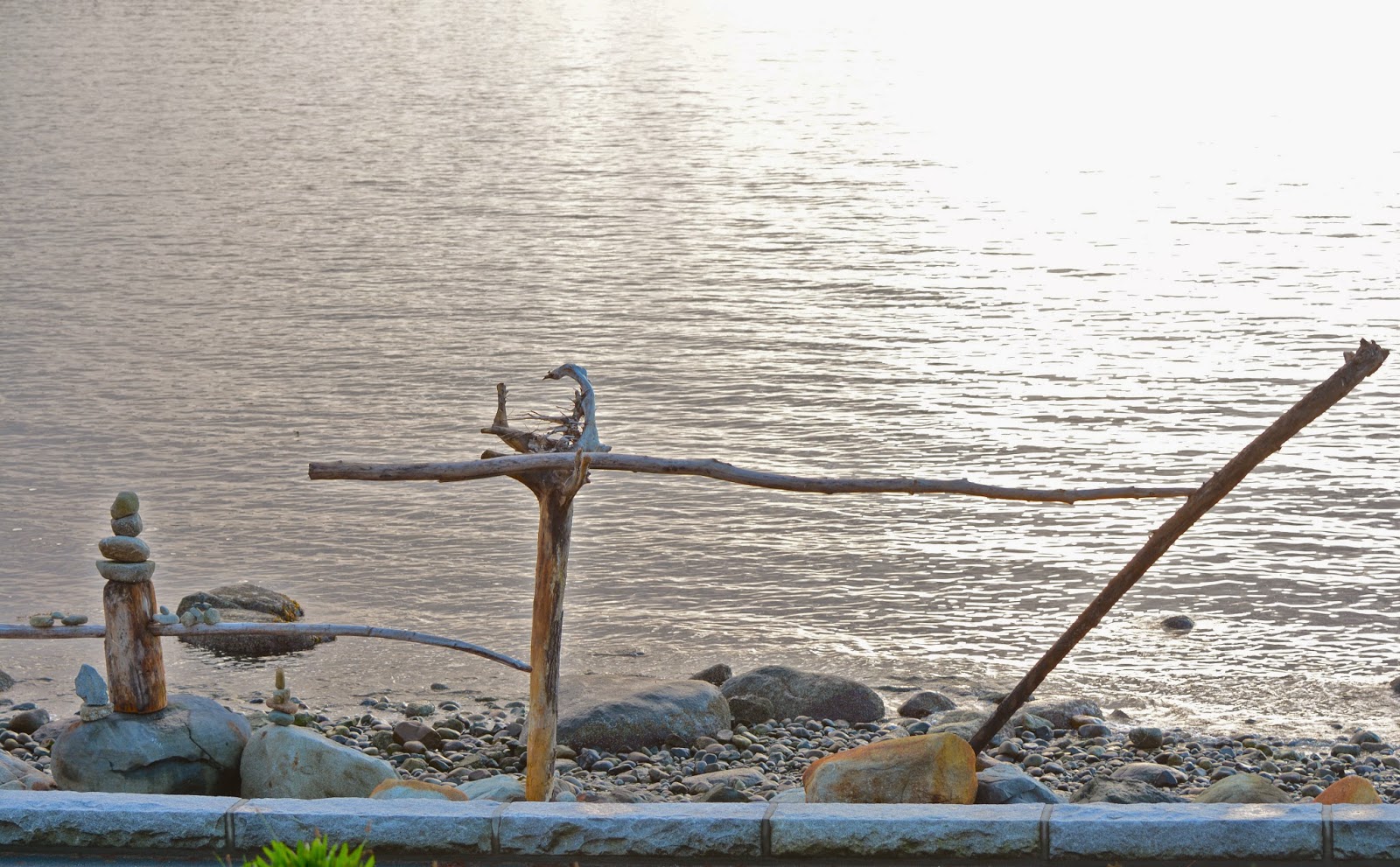 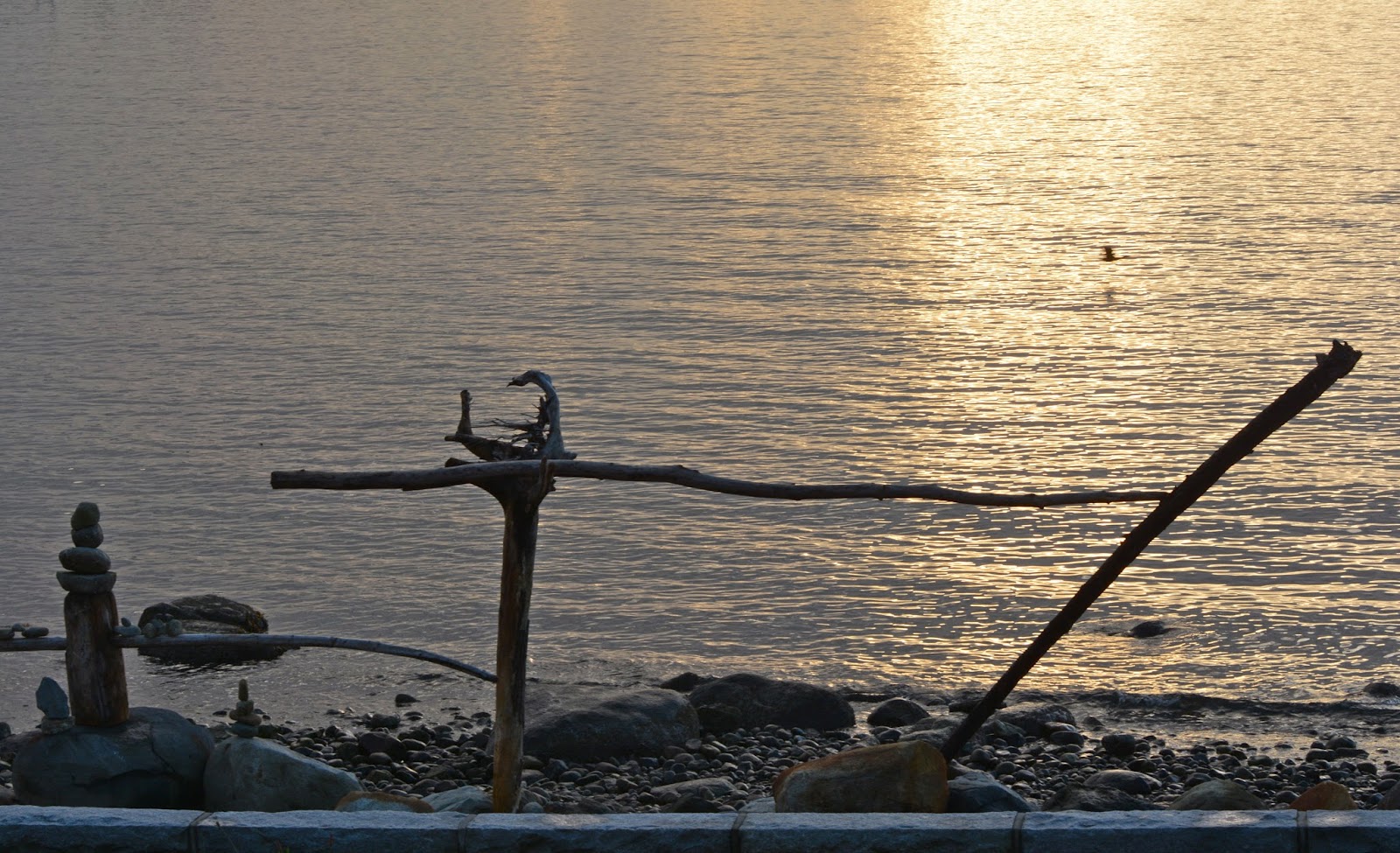 and close up.  In this last one, I see a snake-like critter talking to a very attentive dog.  I'm not sure about that spiky character in the middle. 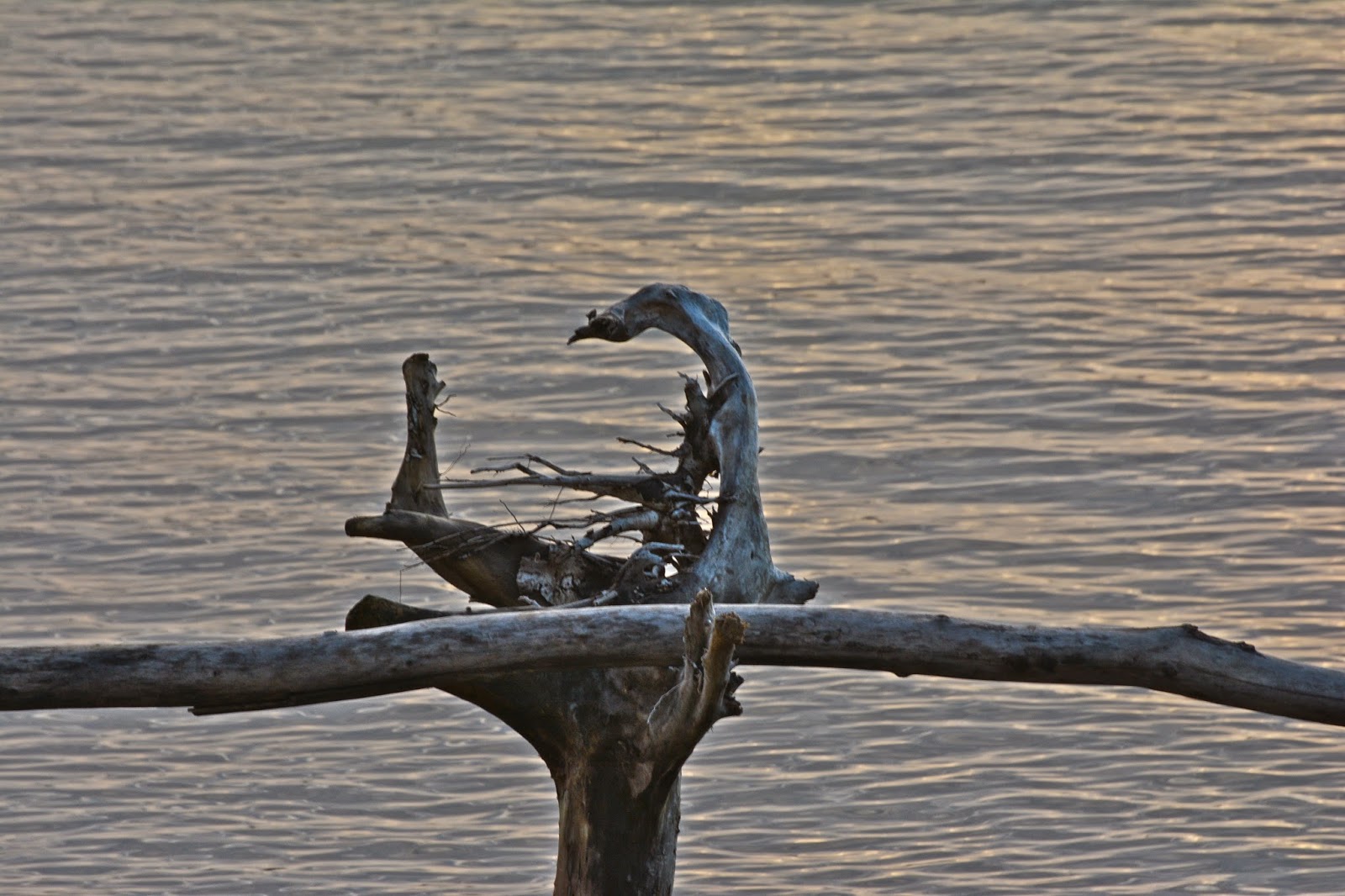 After a night and morning of heavy rain, it was a wonderful surprise in the late afternoon when the sun came out.  Yup, there's a critter here.  Can you find him/her? 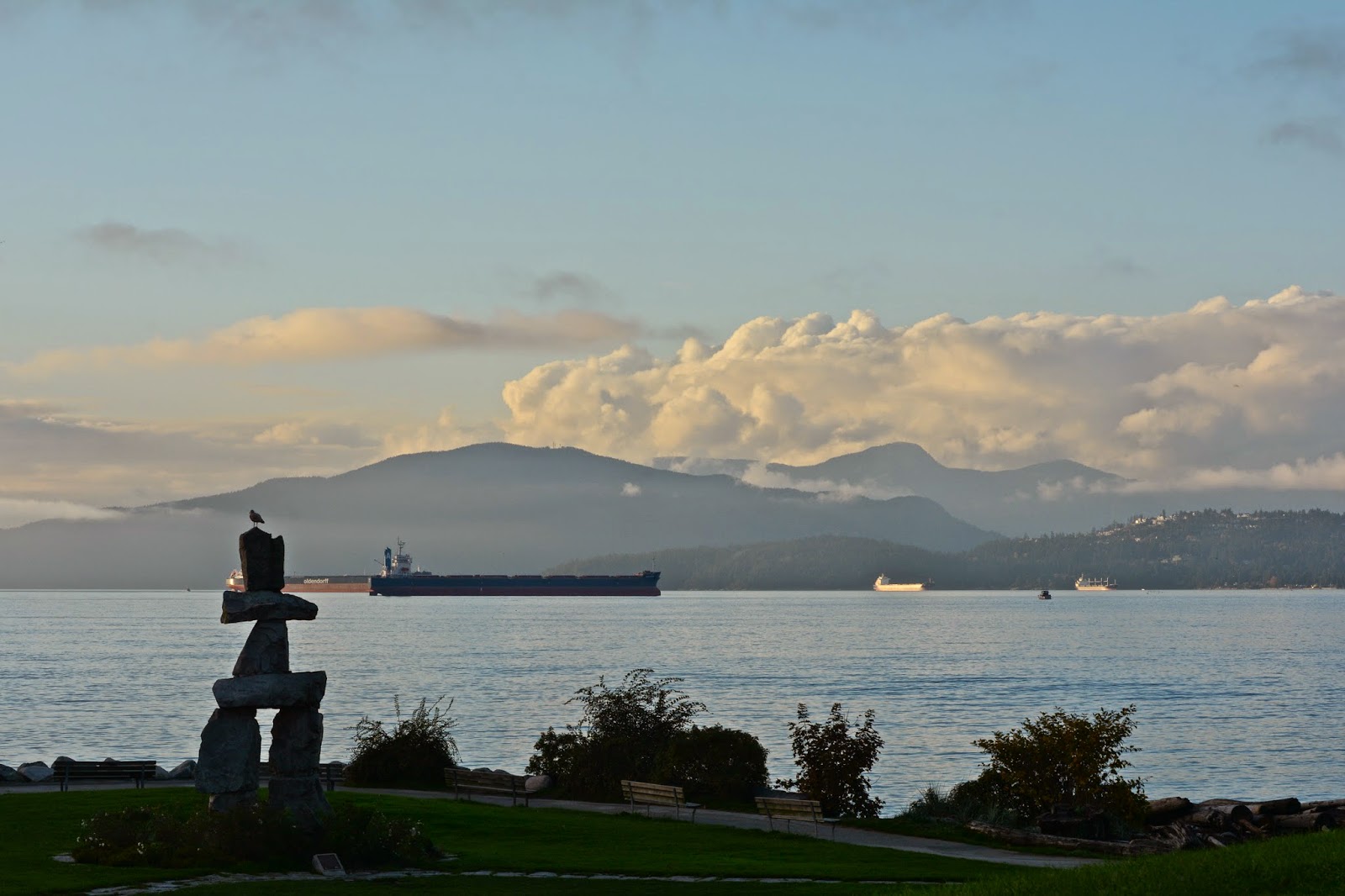 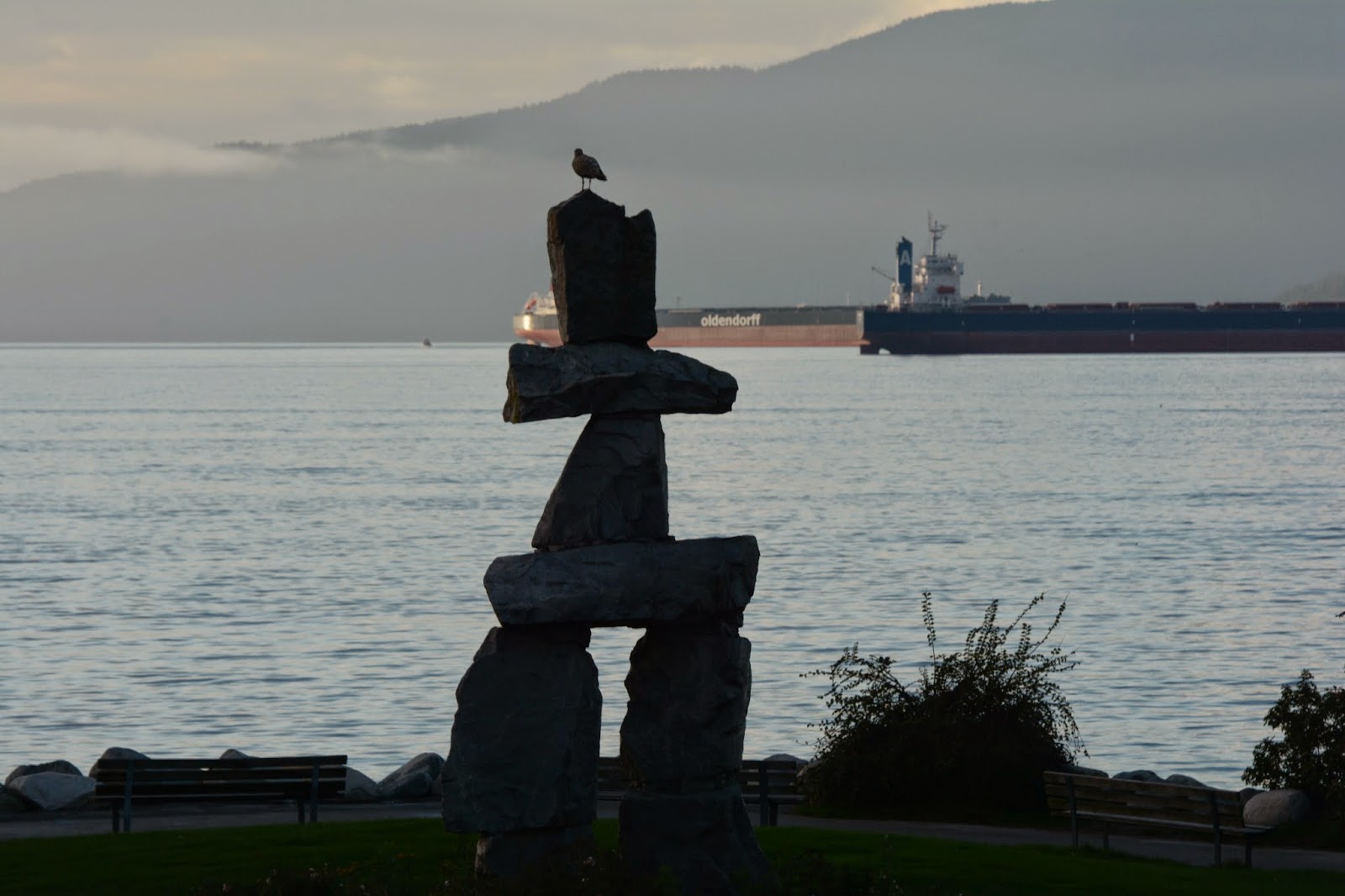 But, my favourite critter(and her best pal) can no longer be ignored. 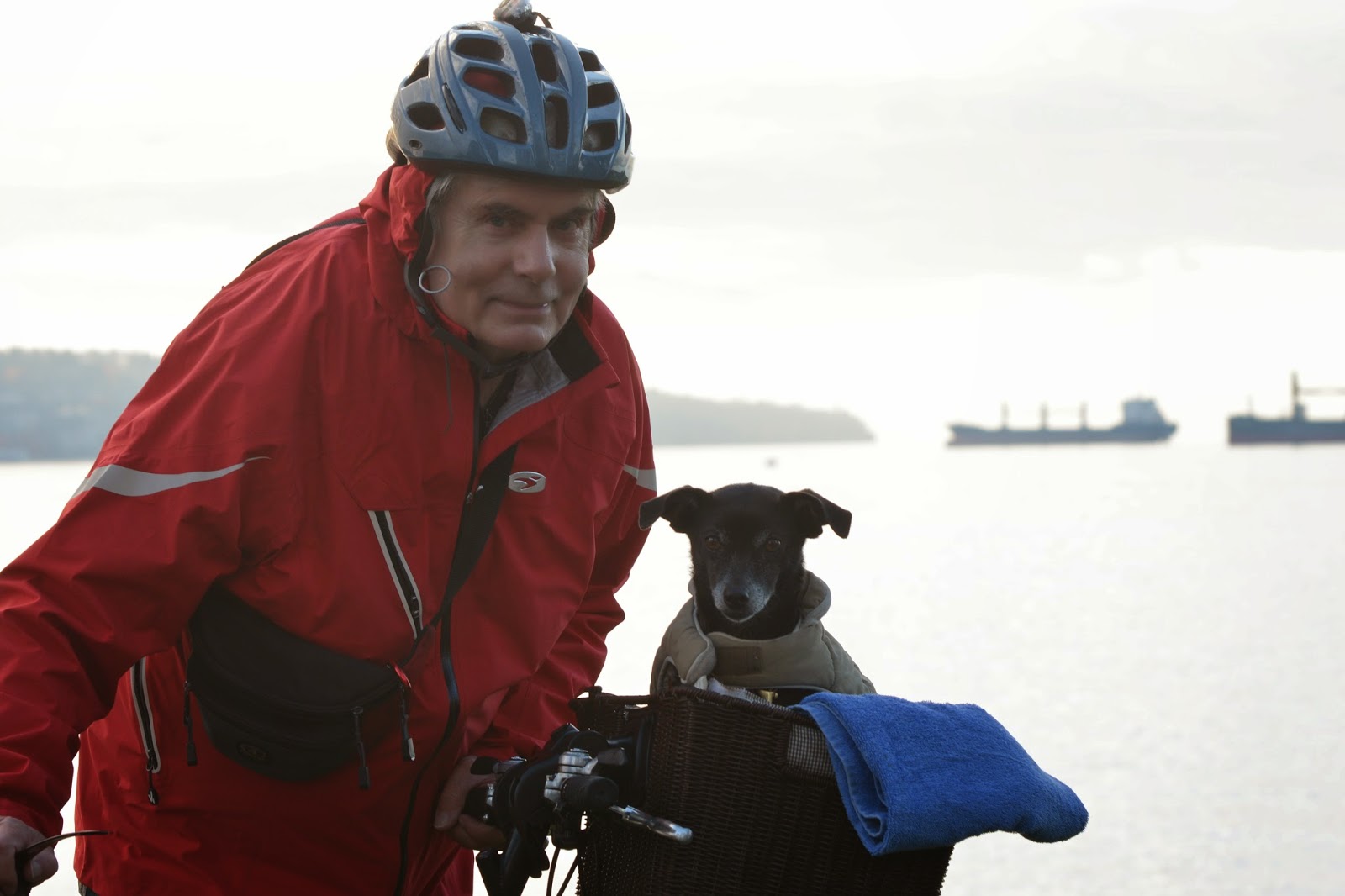 Even in silhouette, they warm my heart. 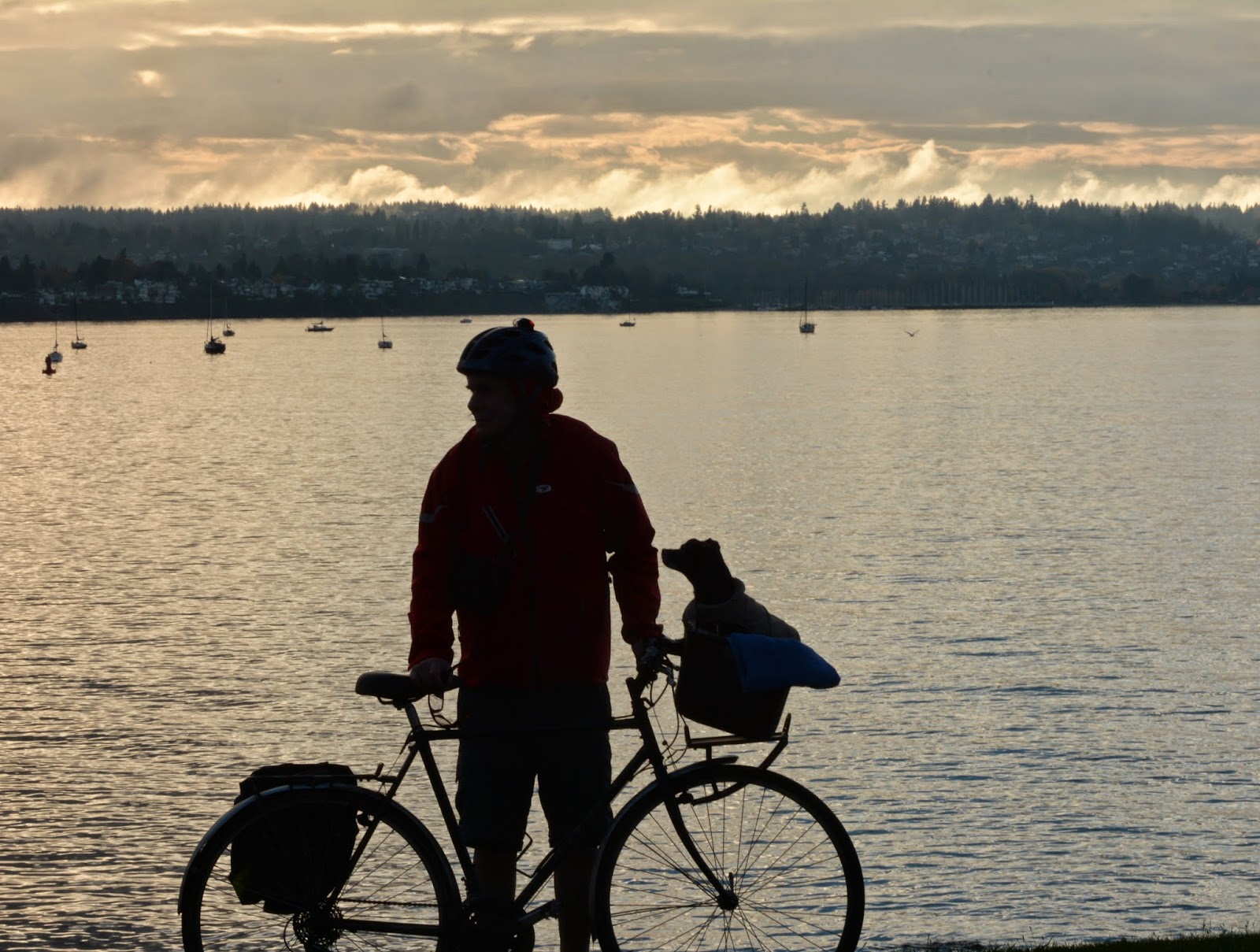 Before we left English Bay, 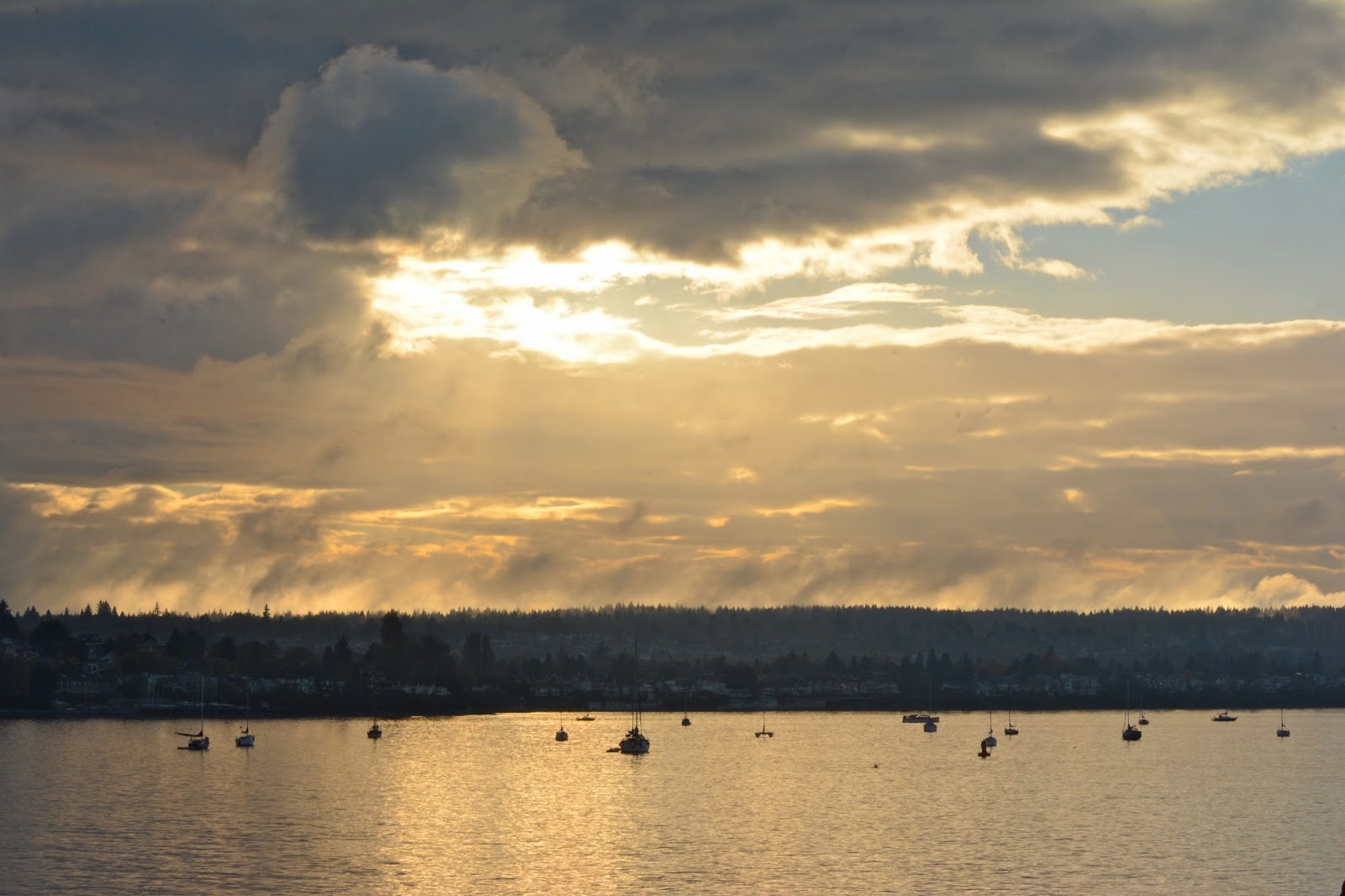 Bill noticed this sculpture across the street from us.  I think it looks rather like a critter too..  in fact, it is remarkably similar to the stick sculpture (photos 4, 5 and 6). 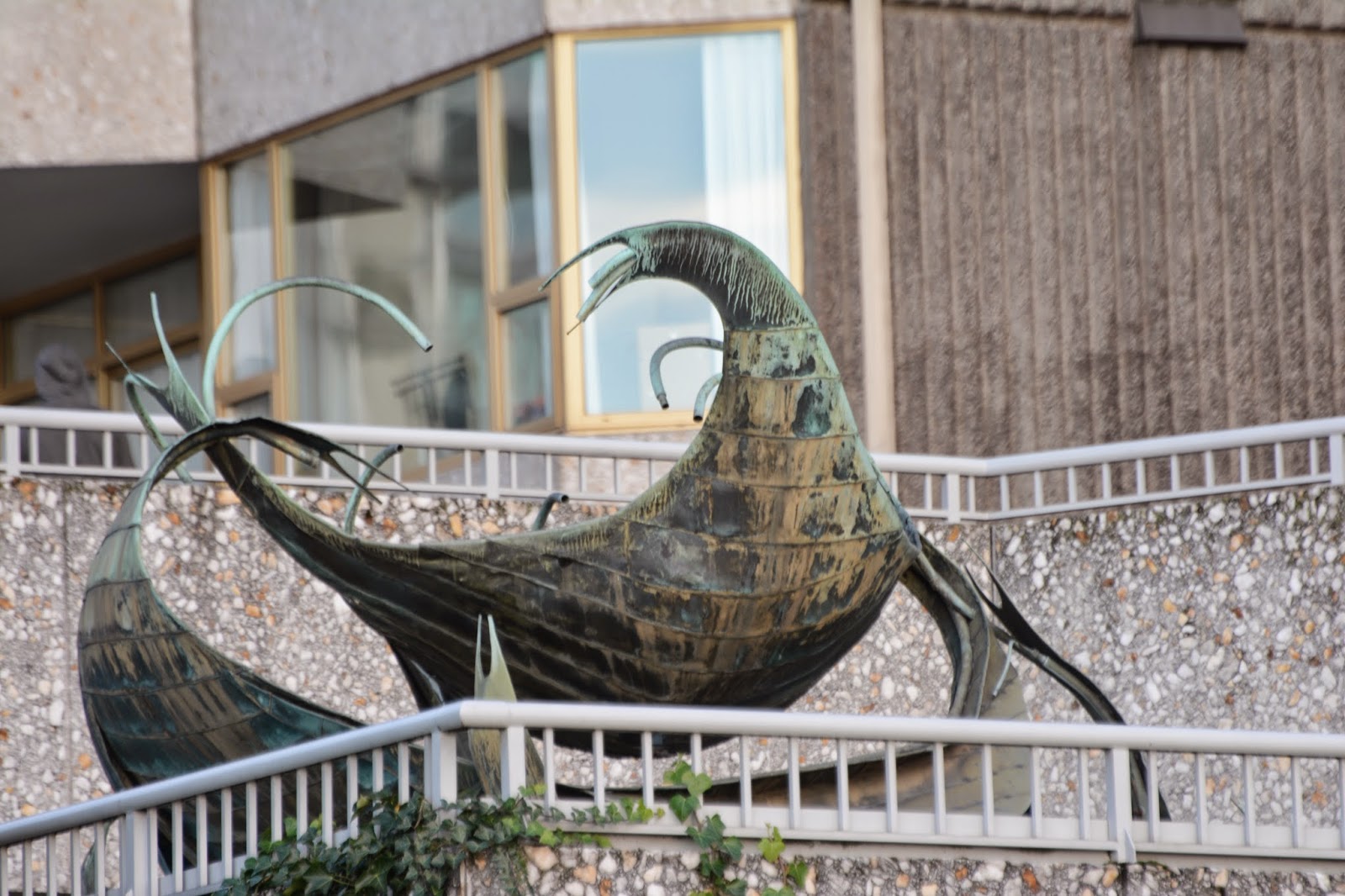 We continued around the harbour, and had to stop when the cranes caught the light (again).. 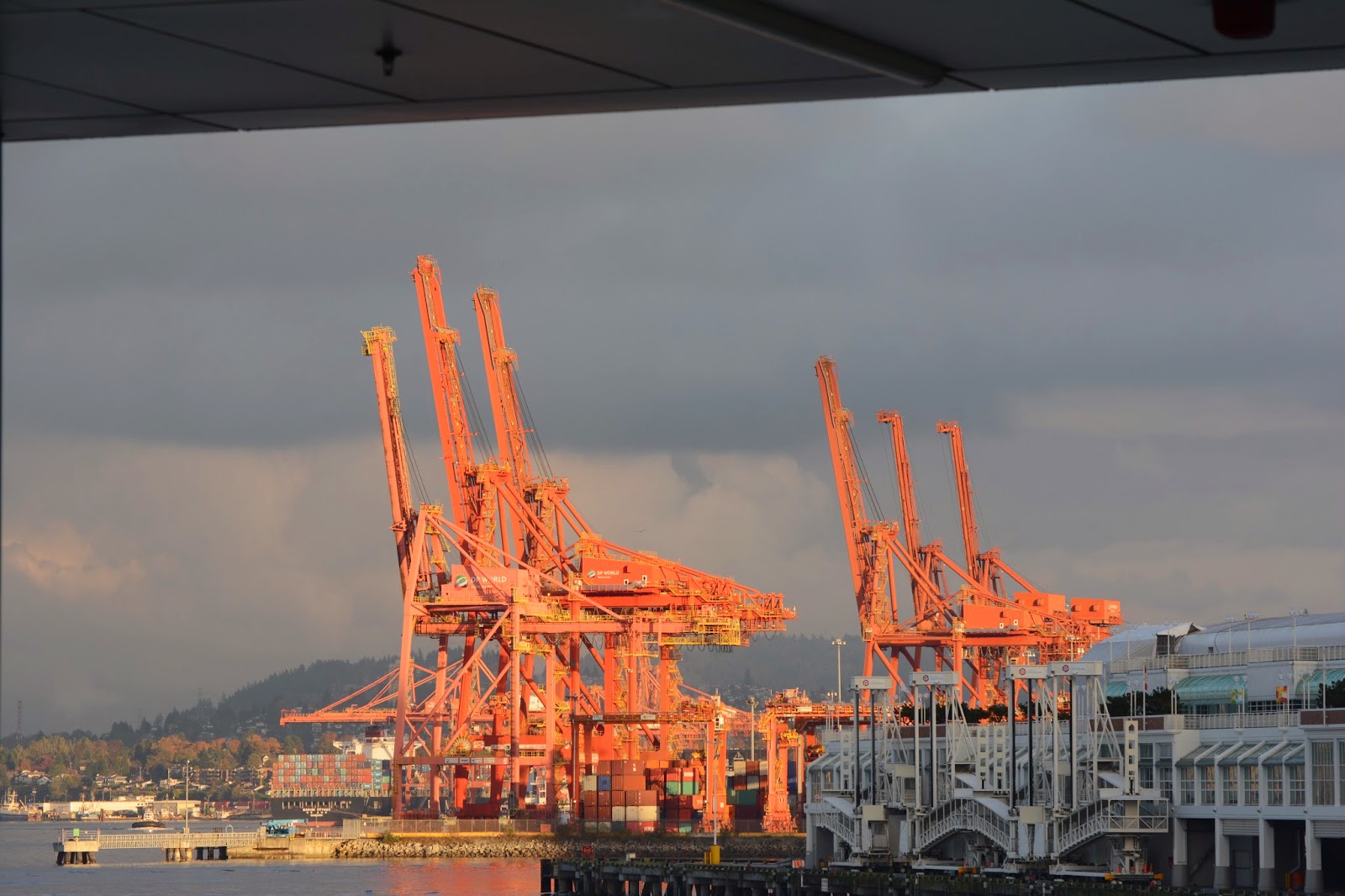 and we couldn't pass them by. 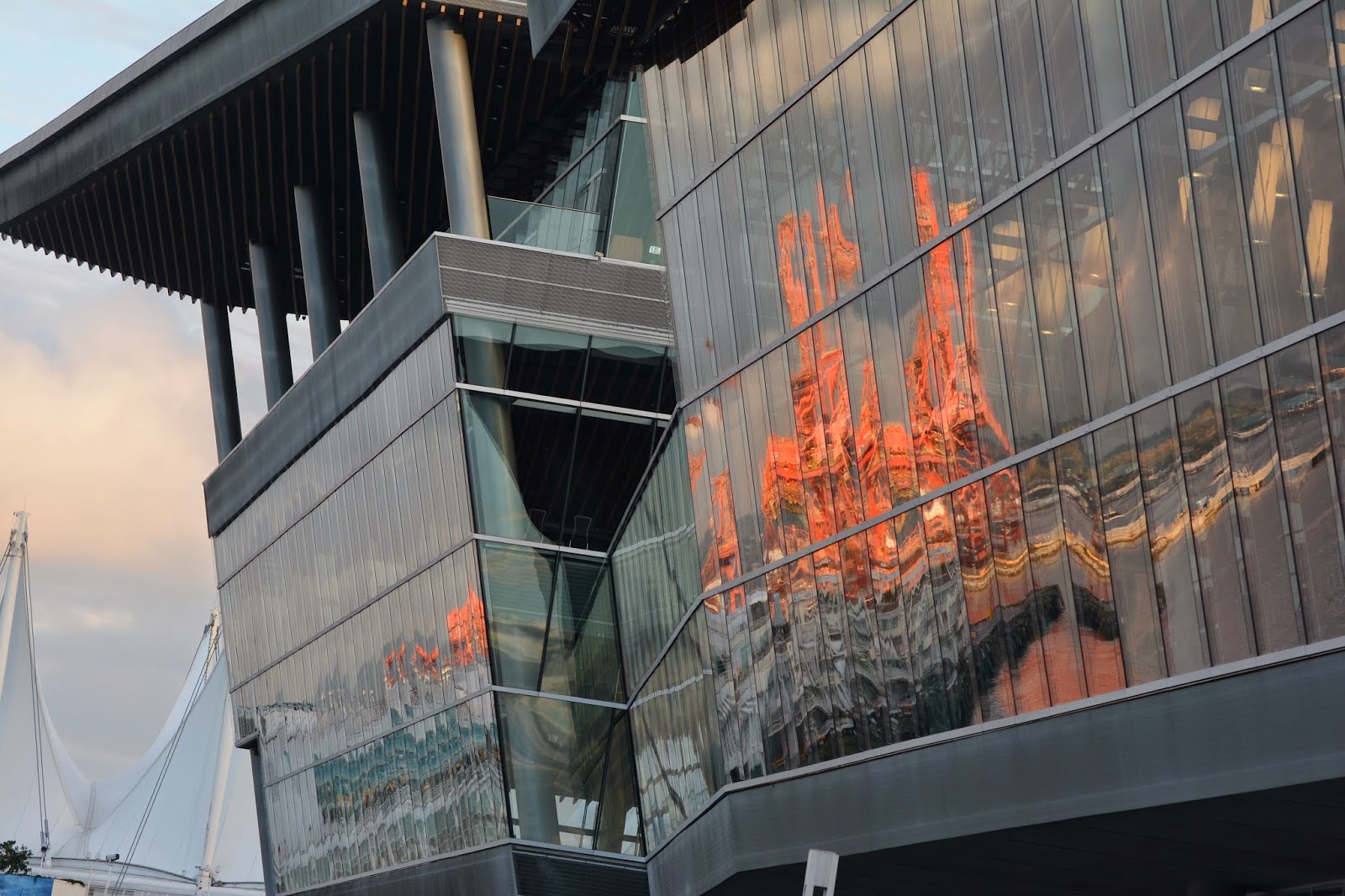 But, I did promise you seagulls, and here they are. 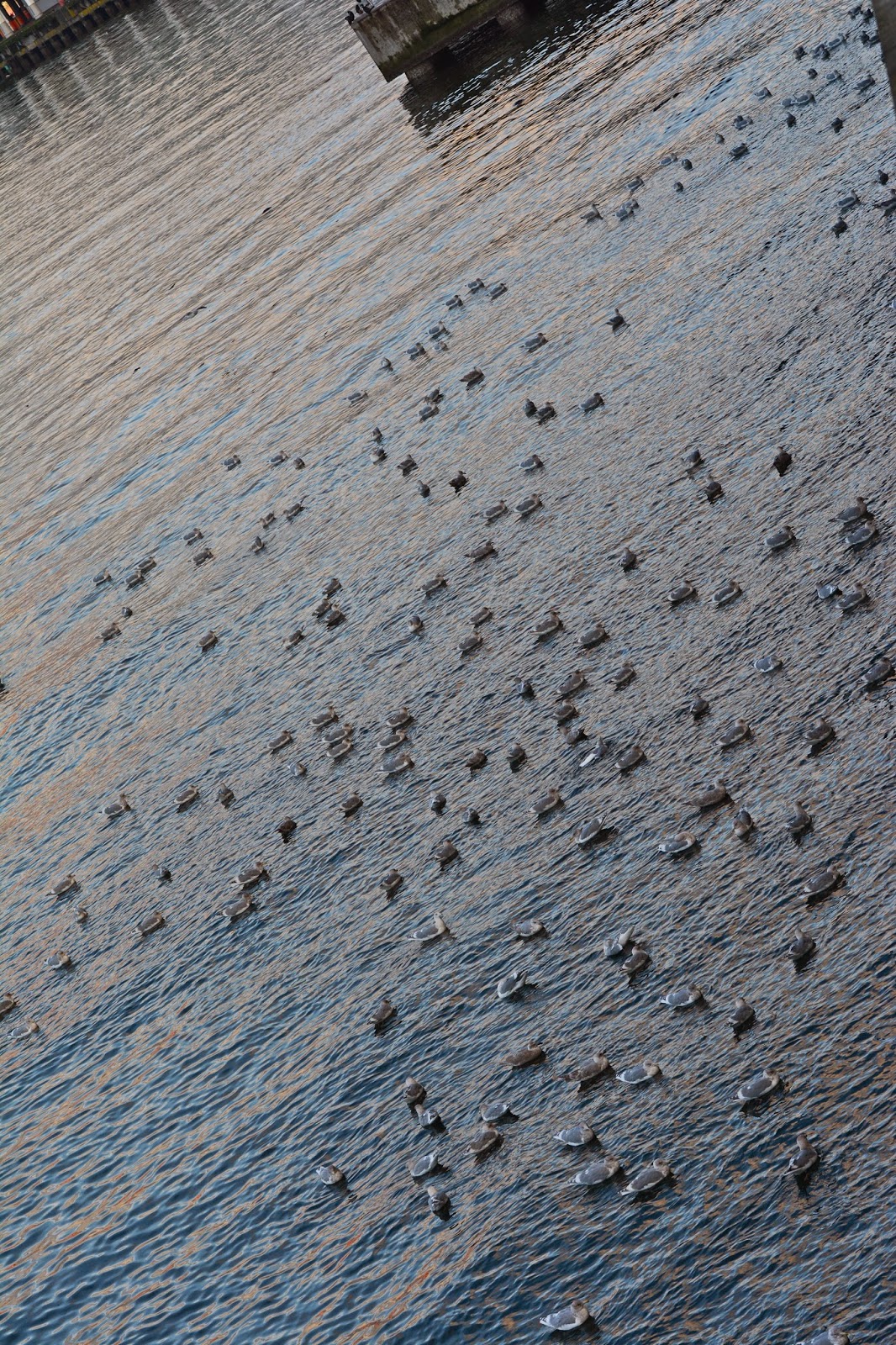 They were rather a noisy bunch, perhaps hungry, 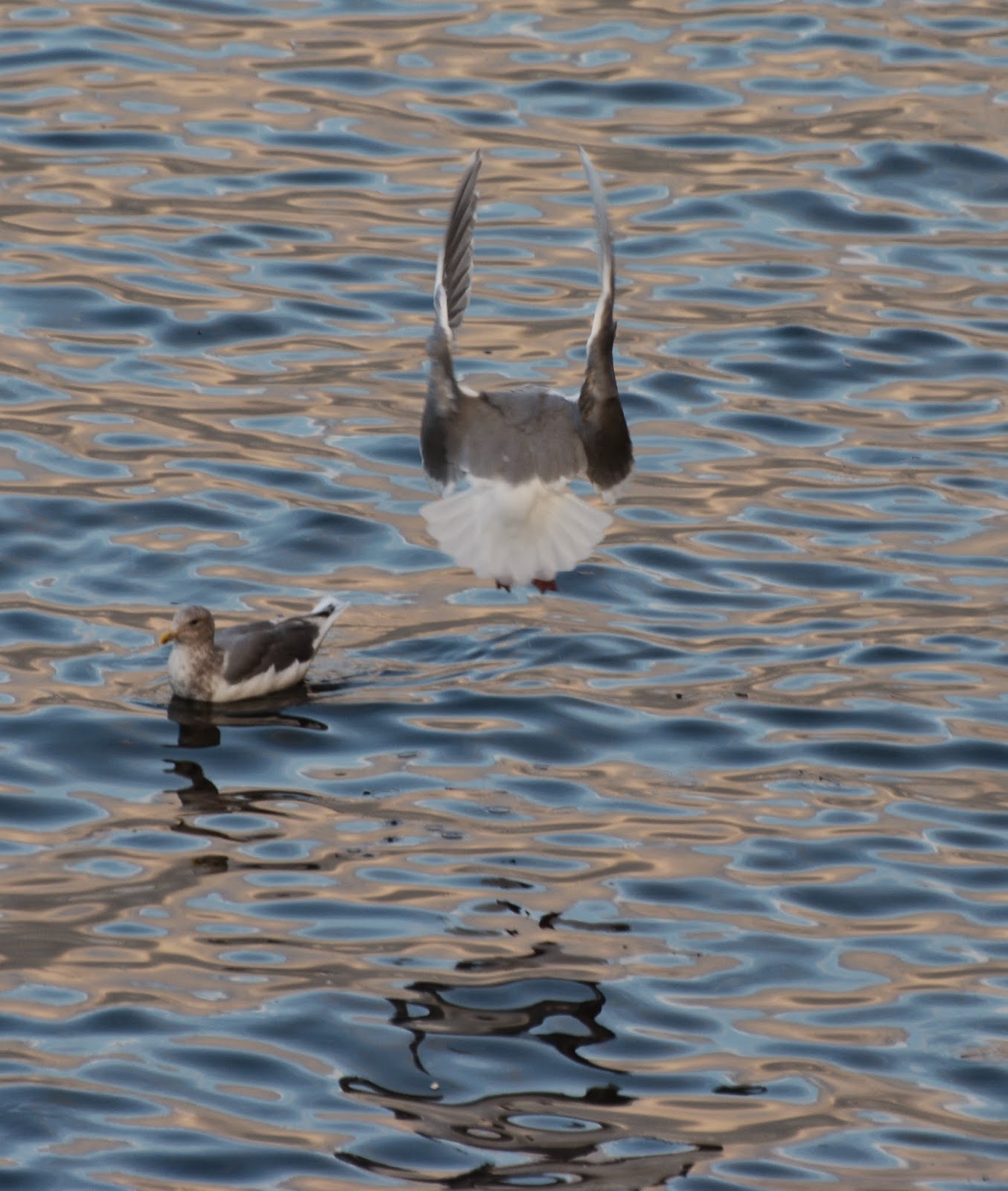 or perhaps heralding the sun down. 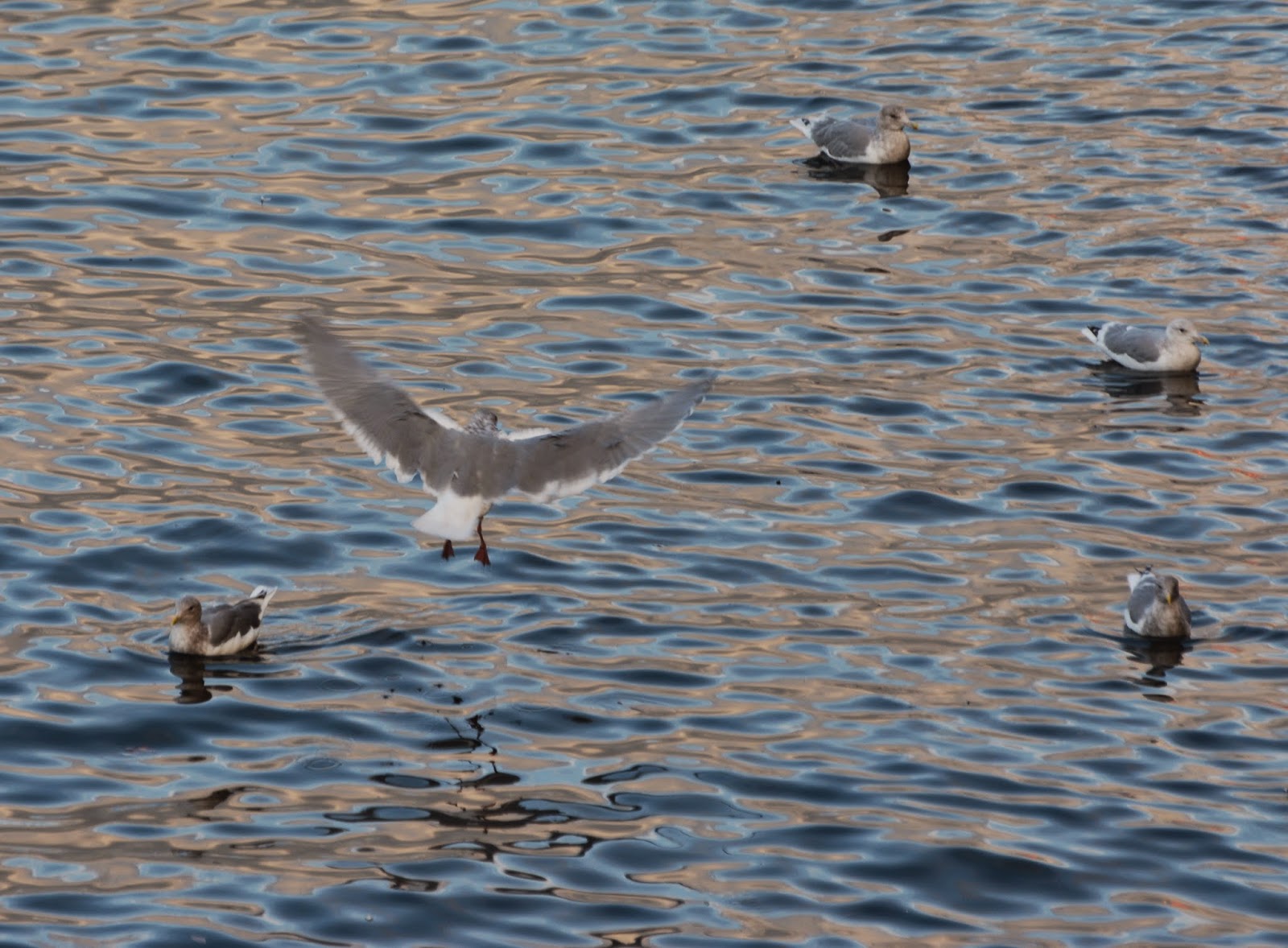 There was quite a bustle in the air with industry in the distance, 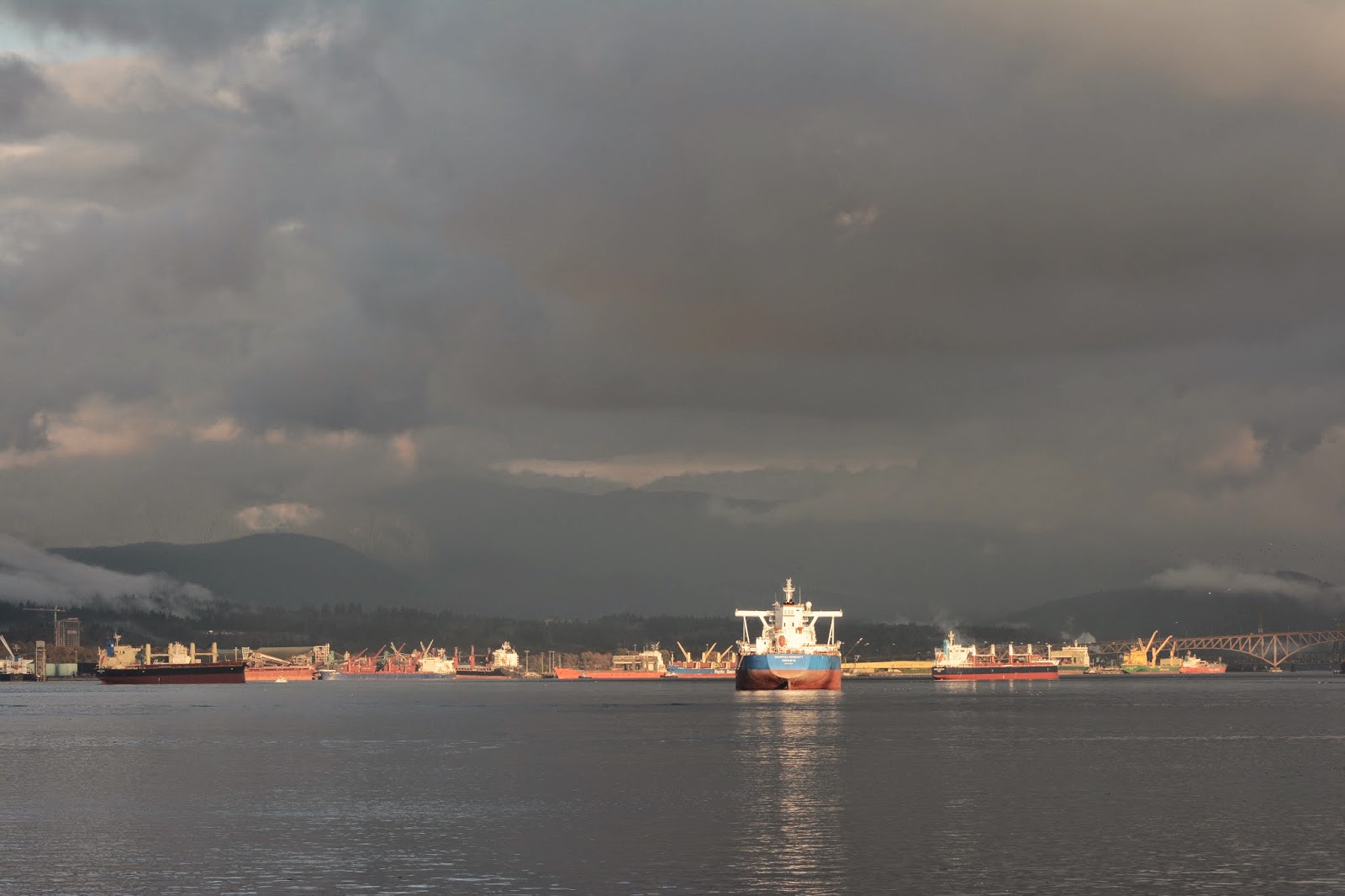 and seaplanes taking off every few minutes, 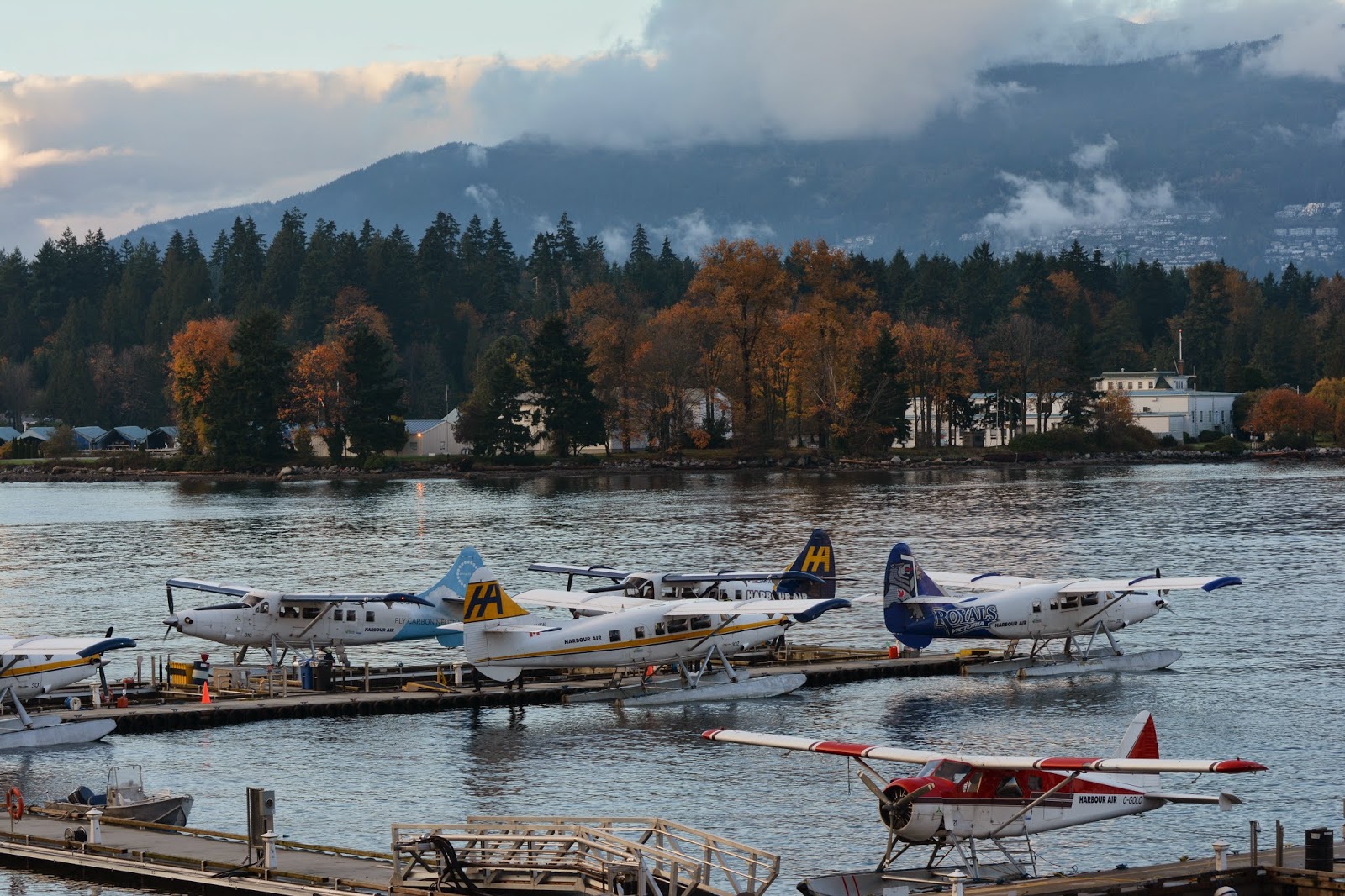 but Bill, waiting patiently, gave me the thumbs up (ok..  peace sign :) that all was well. 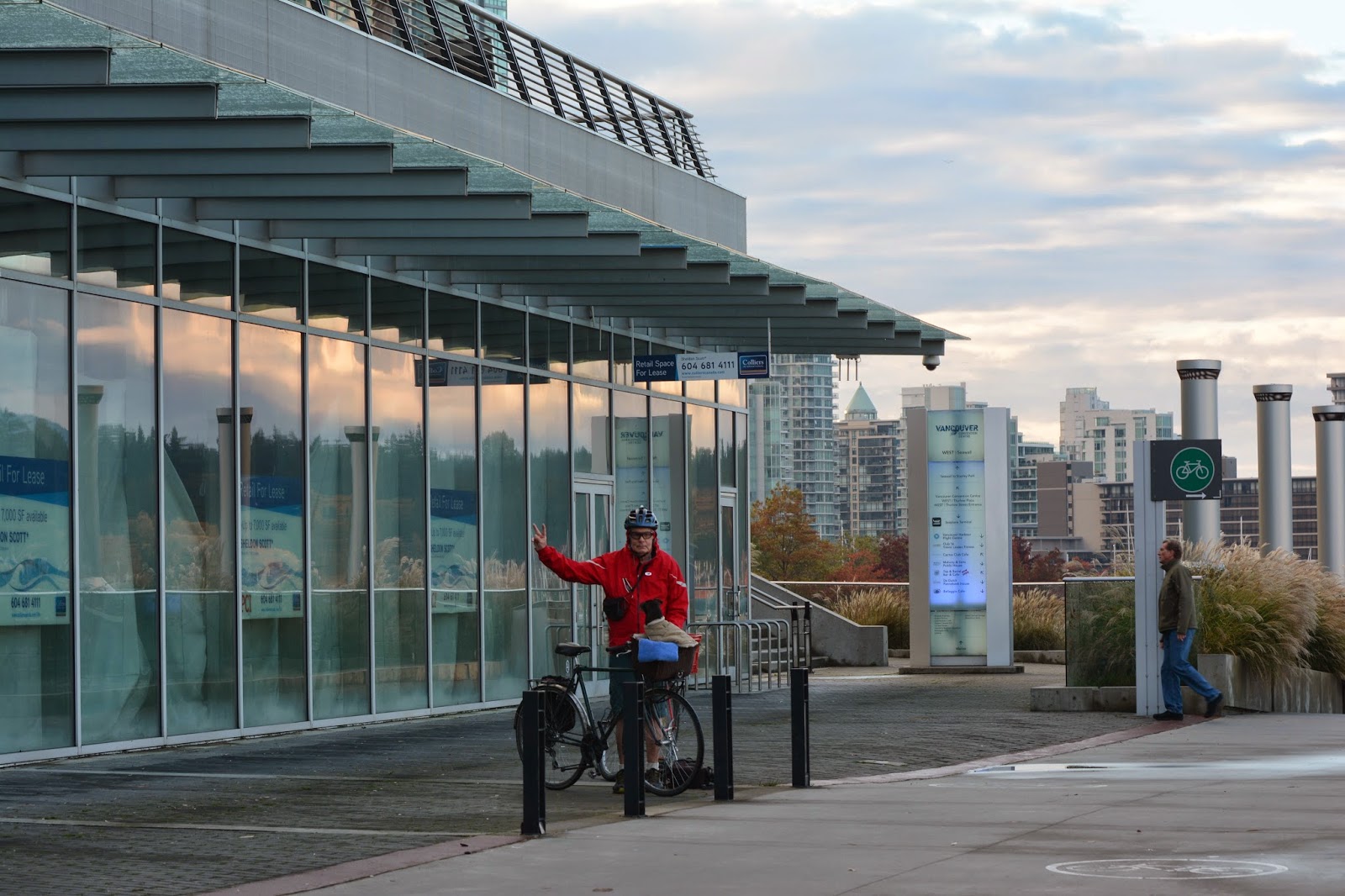 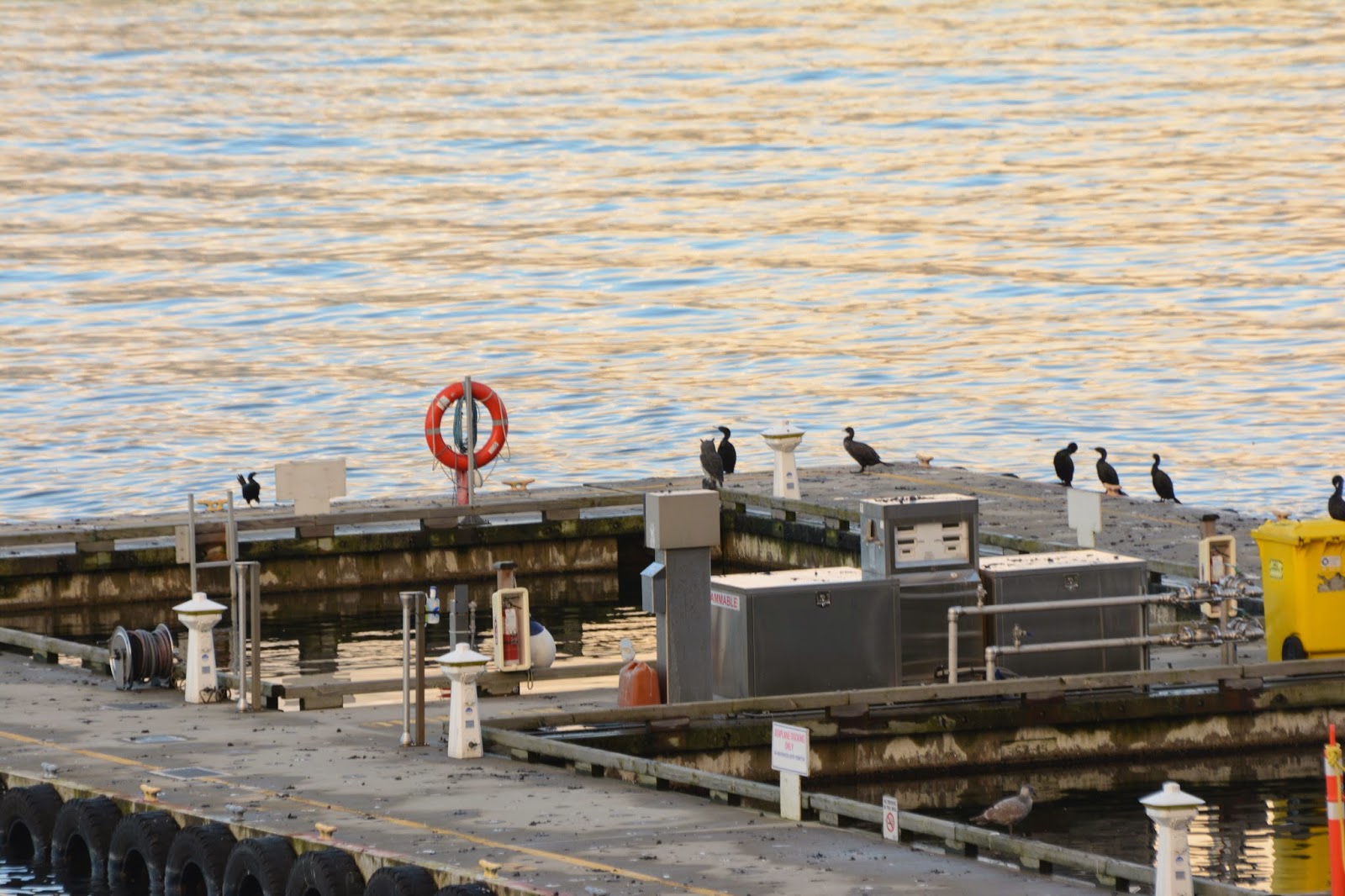 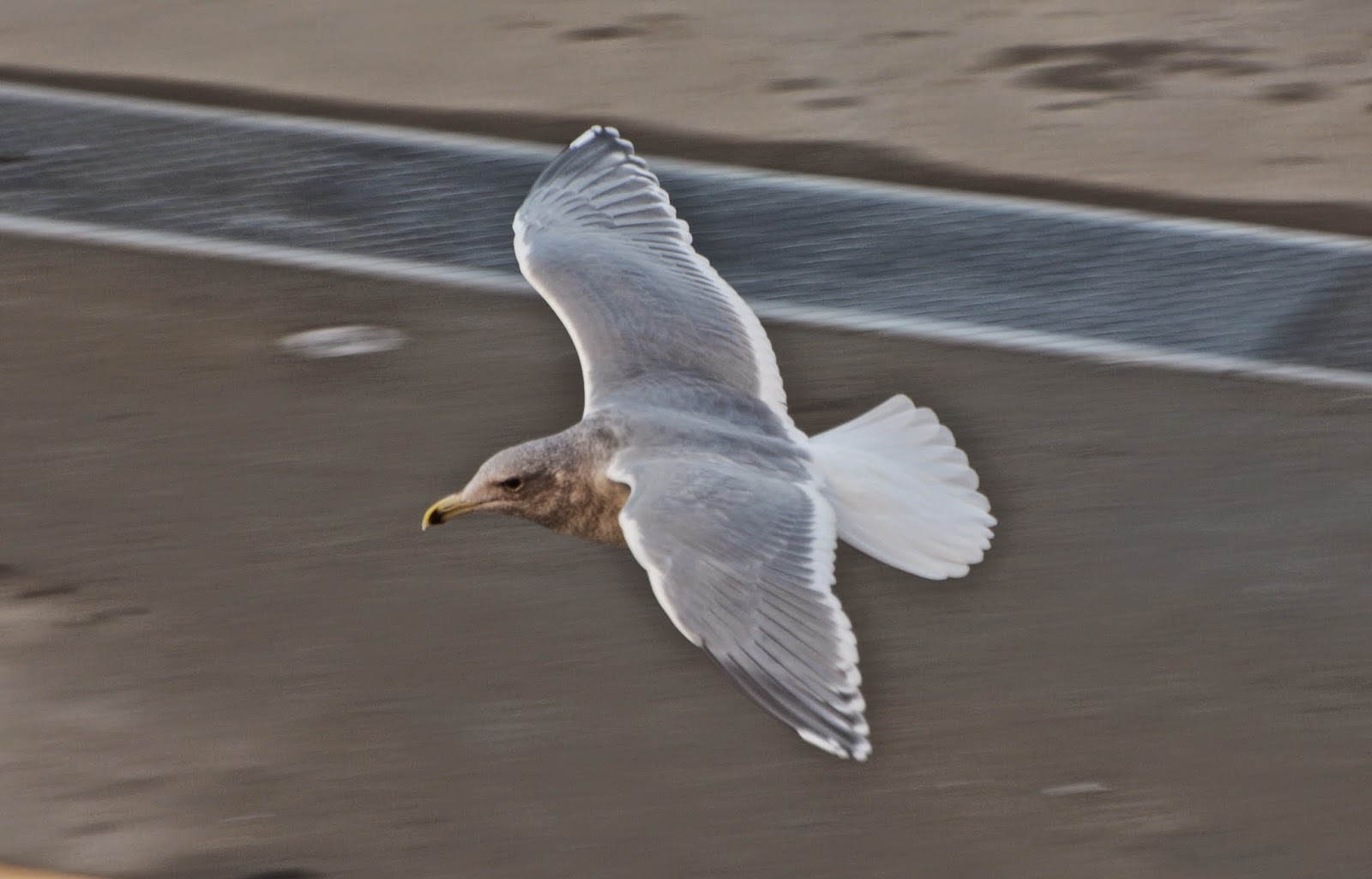 take off and land too.  I wonder if they have figured out the seaplane schedule. 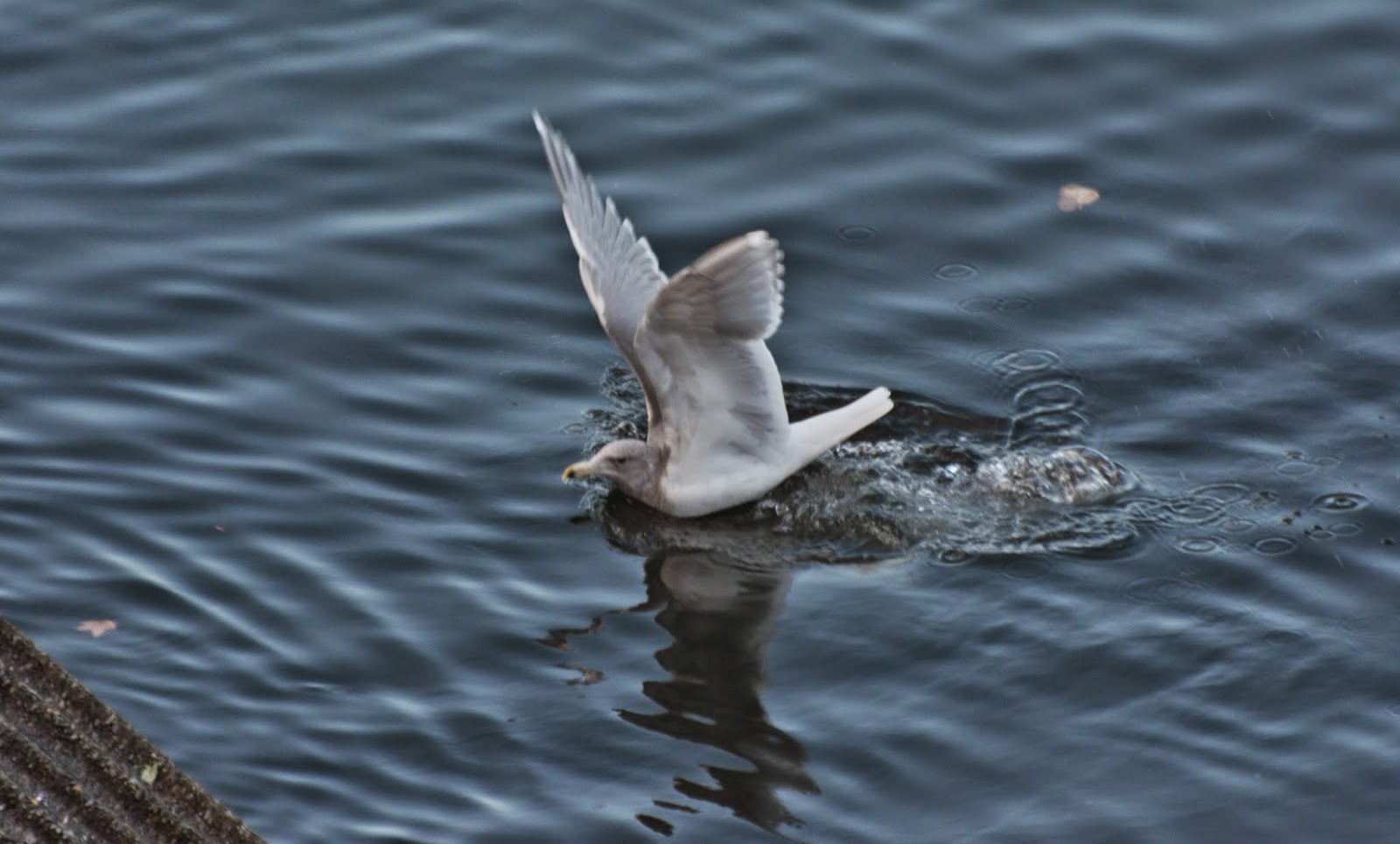 It was hard to stop taking scenery shots,

but we knew we had to get to Harrison's before closing time.  After our treats and completed crossword puzzle, we went for a walk with Black Jack.  I took one reflection shot across False Creek, 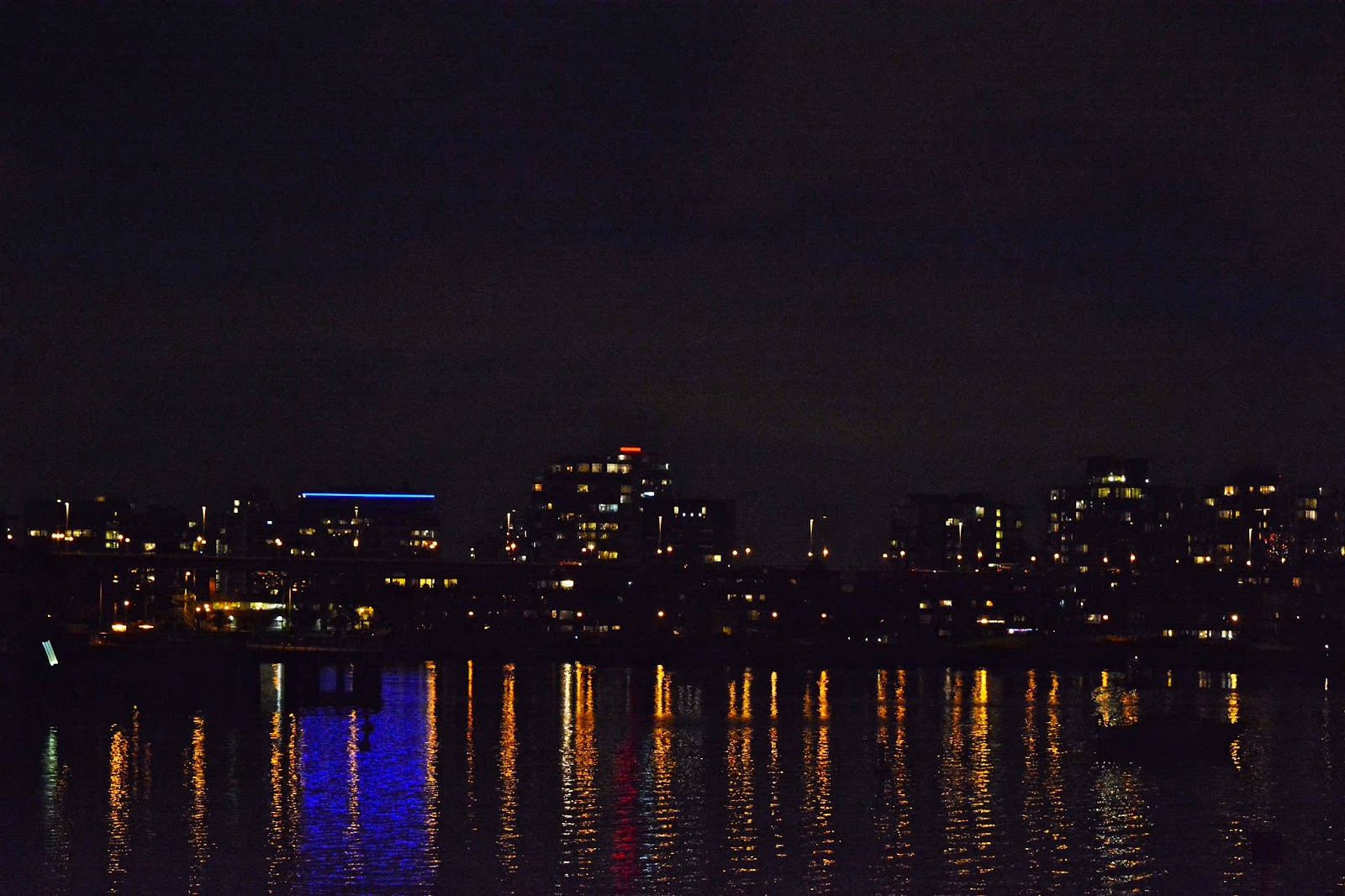 and one shot of Black Jack and her best pal on the walking path, 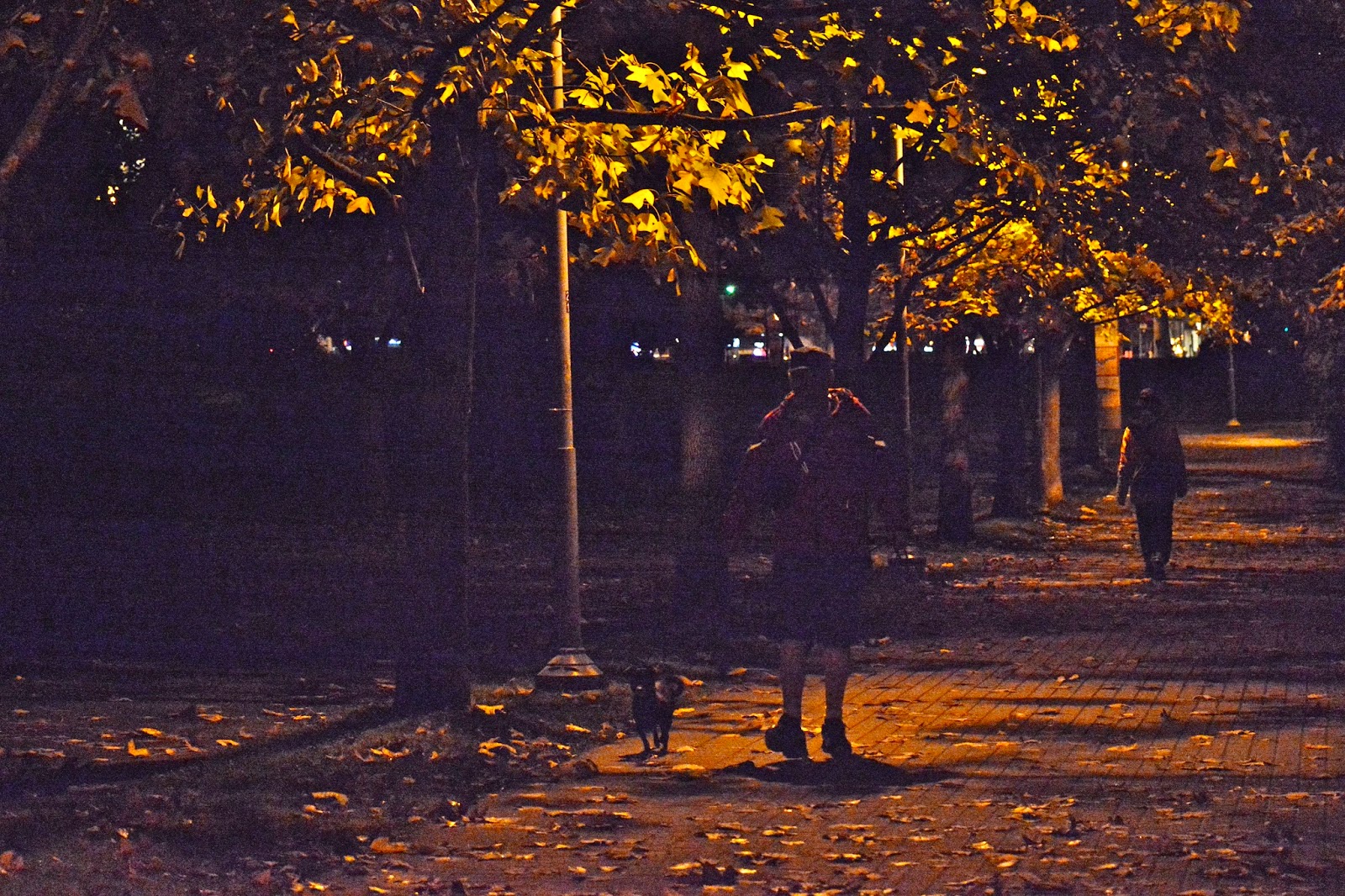 and I even caught a shot of this bicycle with a Monkey Light.  That put the idea in my head that we need one more addition to our bicycle wheels.  What do you think? 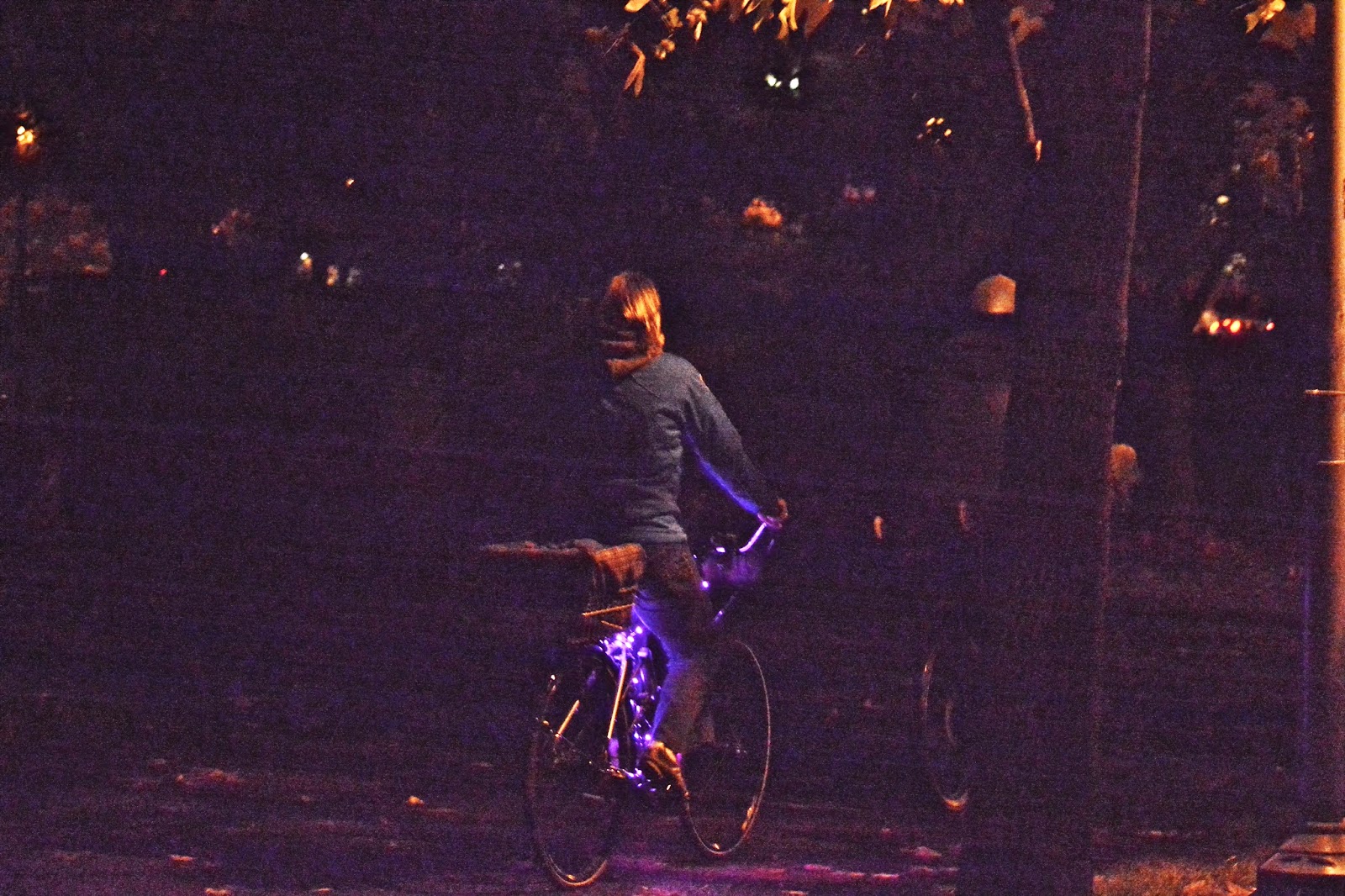 A lone leaf on the path doesn't qualify as a critter but it was my last shot of the day.  For a great variety of amazing critters, I strongly encourage you to visit Eileen's meme.  If you live in BC and have a moment to let me know what you think of Halloween Fire Crackers, I'd sure appreciate it.  Just "yes" or "no" is all that's needed.  Have a very happy Saturday night.  Oh..  and if you live in any of the following places, don't forget to put your clocks back an hour.  Many thanks to you for stopping by and special thanks to Eileen for hosting! 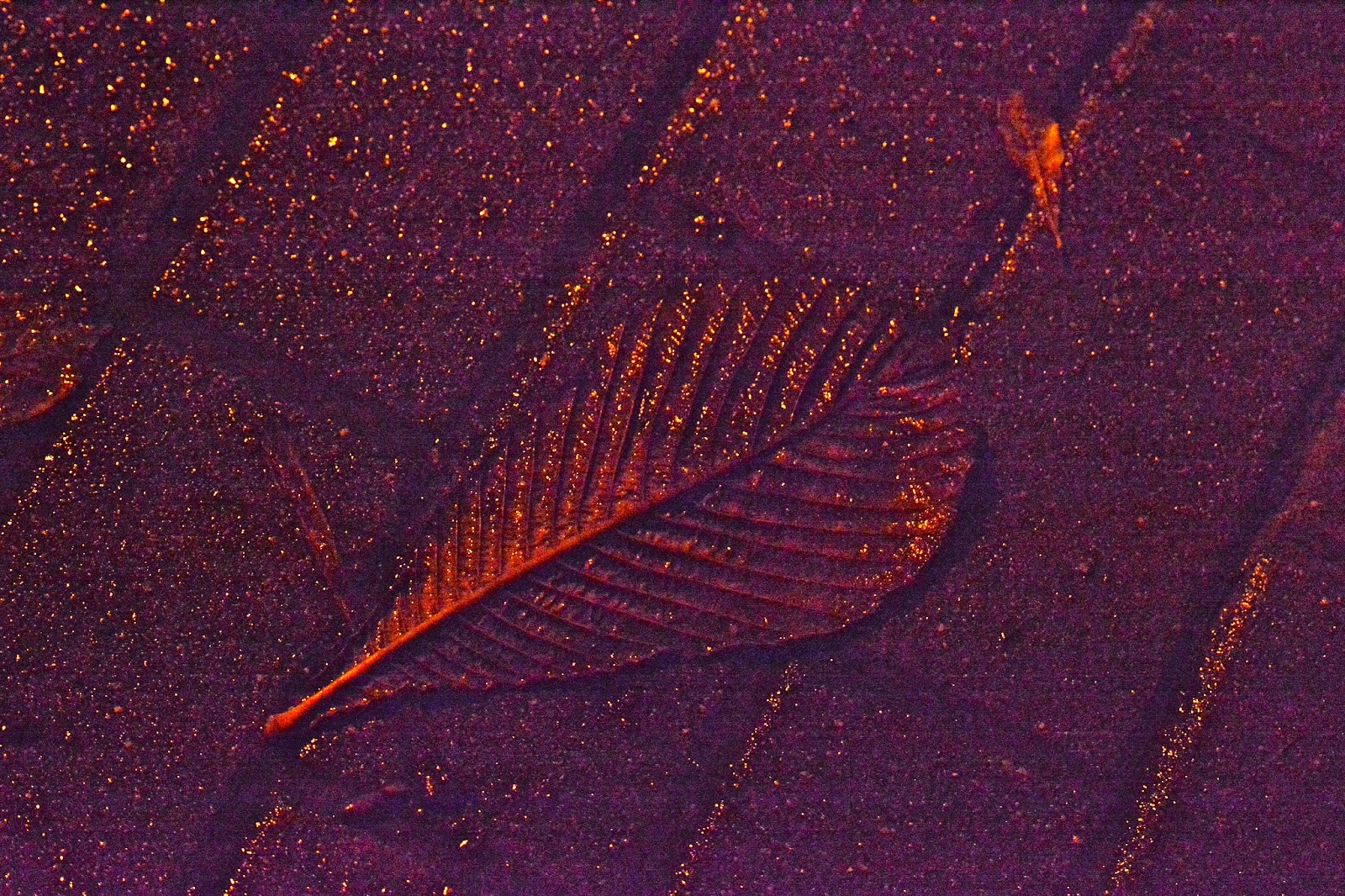