Blues and Leafy Stars on Monday

It was a beautiful weekend in Vancouver and a few "blues" turned up in my photos that I thought would be fun to share with Smiling Sally's Blue Monday meme.

I posted about this boat yesterday but saved one photo showing its underside. .  We saw it on Saturday as we biked along English Bay,  It looks a bit sad, but hopefully, has been rescued since we saw it. I think (hope) that those are reflections rather than a gash, but either way, I guess I'd have to concede it doesn't appear to be seaworthy for the moment. 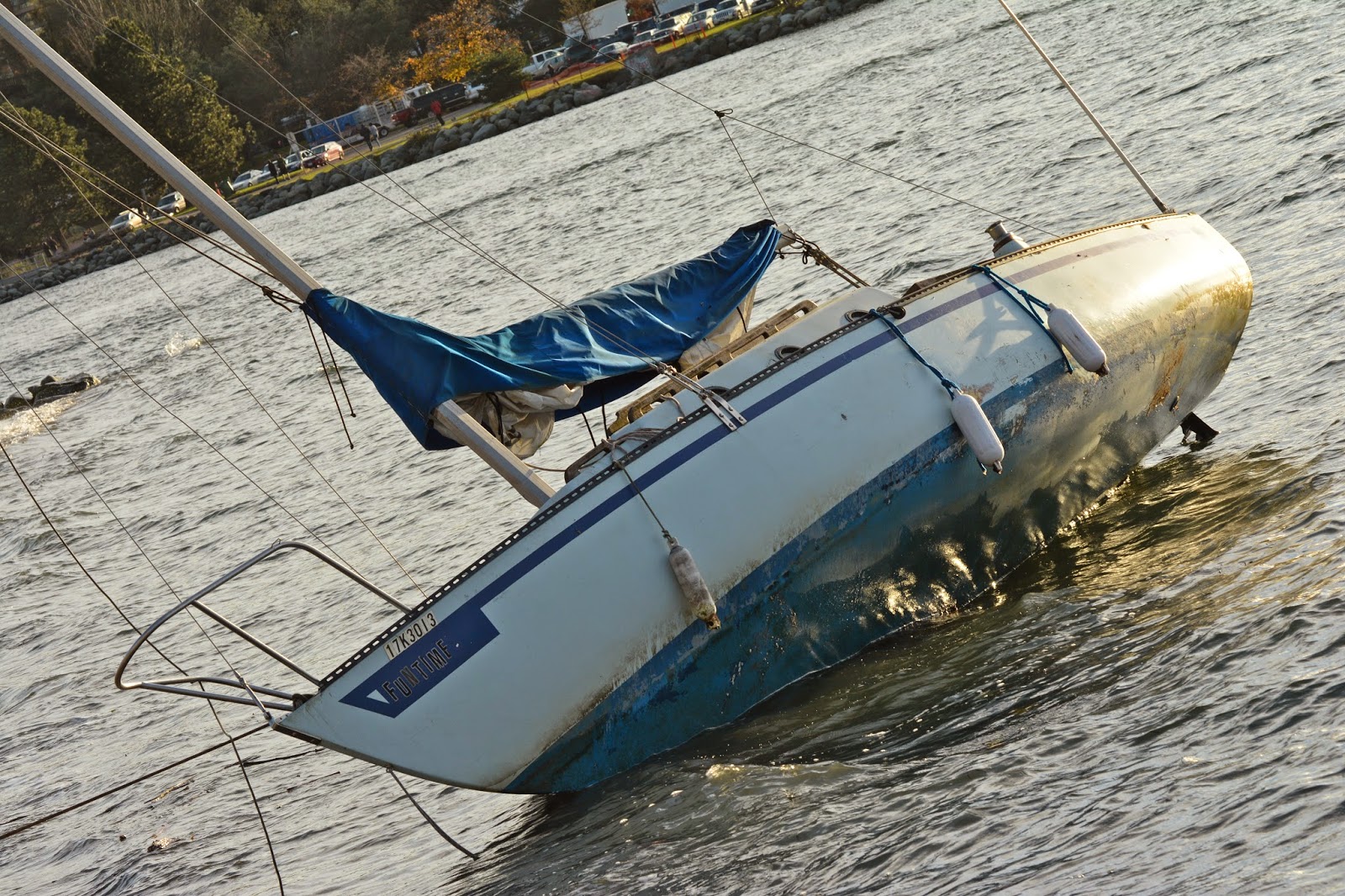 I also posted photos of crows flying around that boat yesterday but saved this one for Sally. 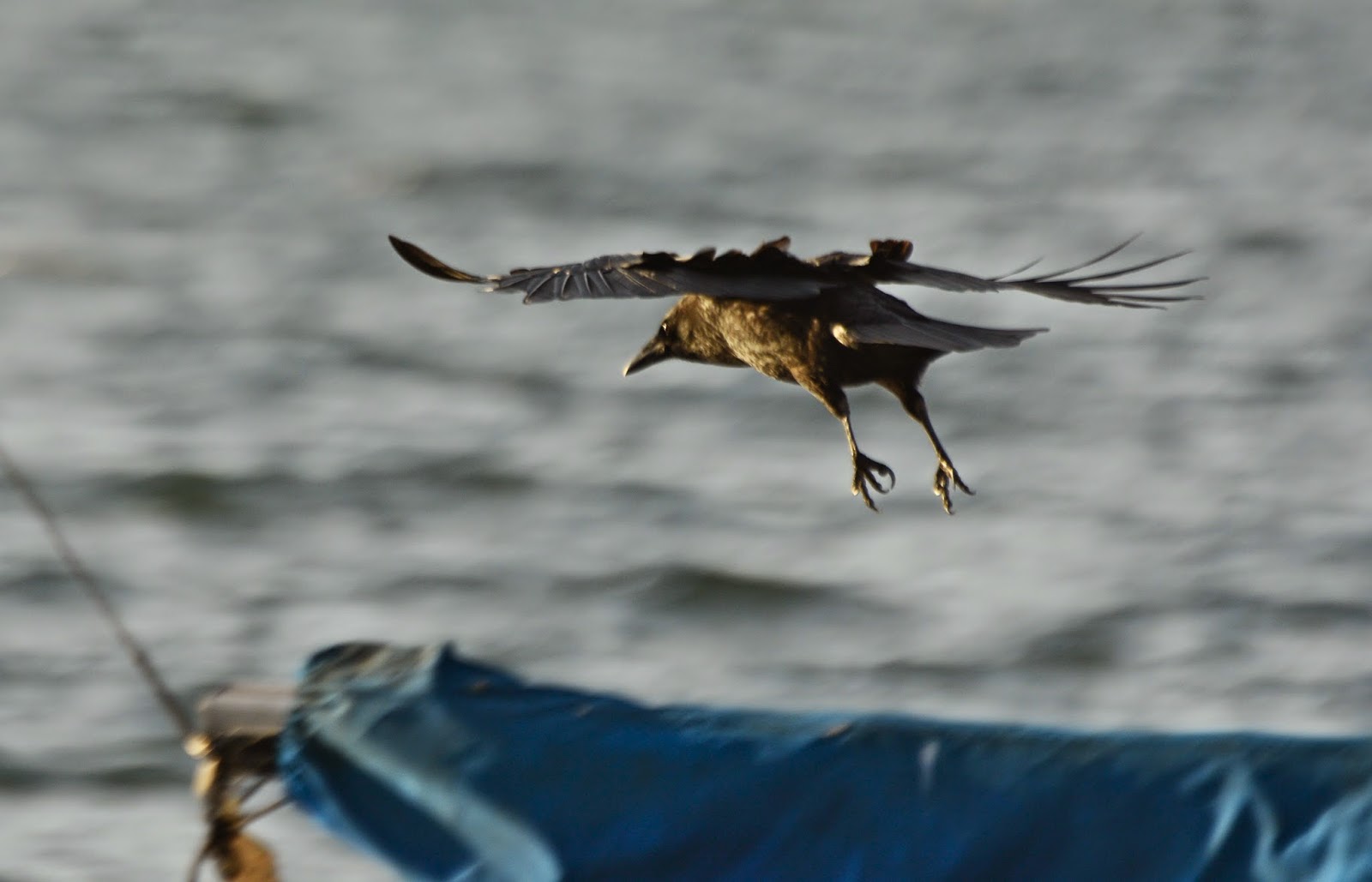 That takes us to Sunday morning.  This mosaic in David Lam Park is, I believe part of the Art Underfoot project, though I haven't been able to find information on this particular installation.  We walk over or around it almost every day, but yesterday, after a night of heavy rain, the sun caught the puddles over it, even reflecting some of the high-rises in the area.  Lots of blues to enjoy and I thought the rain-sun input added new interest to an already fascinating work. 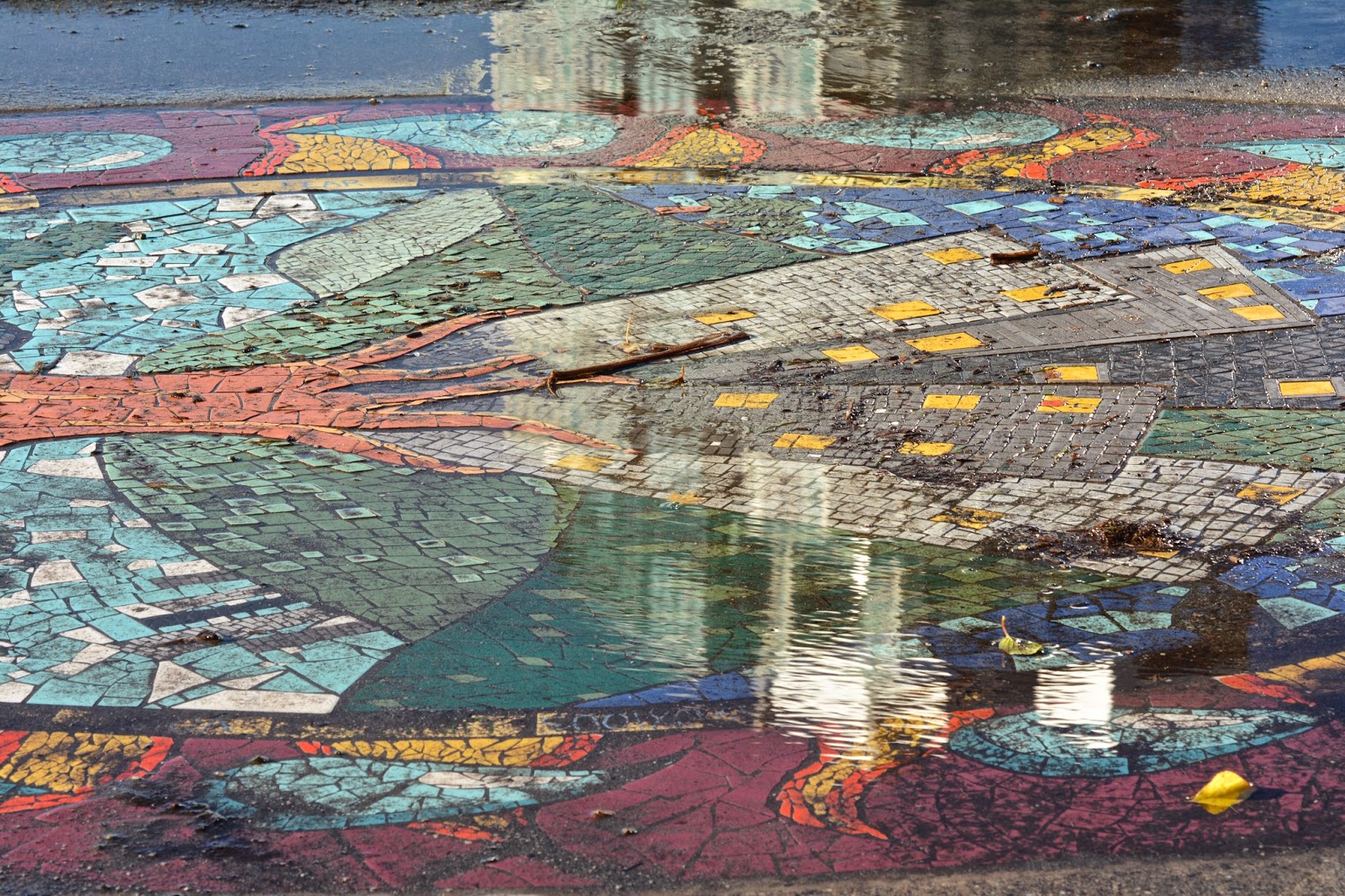 Looking past the mosaic, sun was bringing out the blue of False Creek. 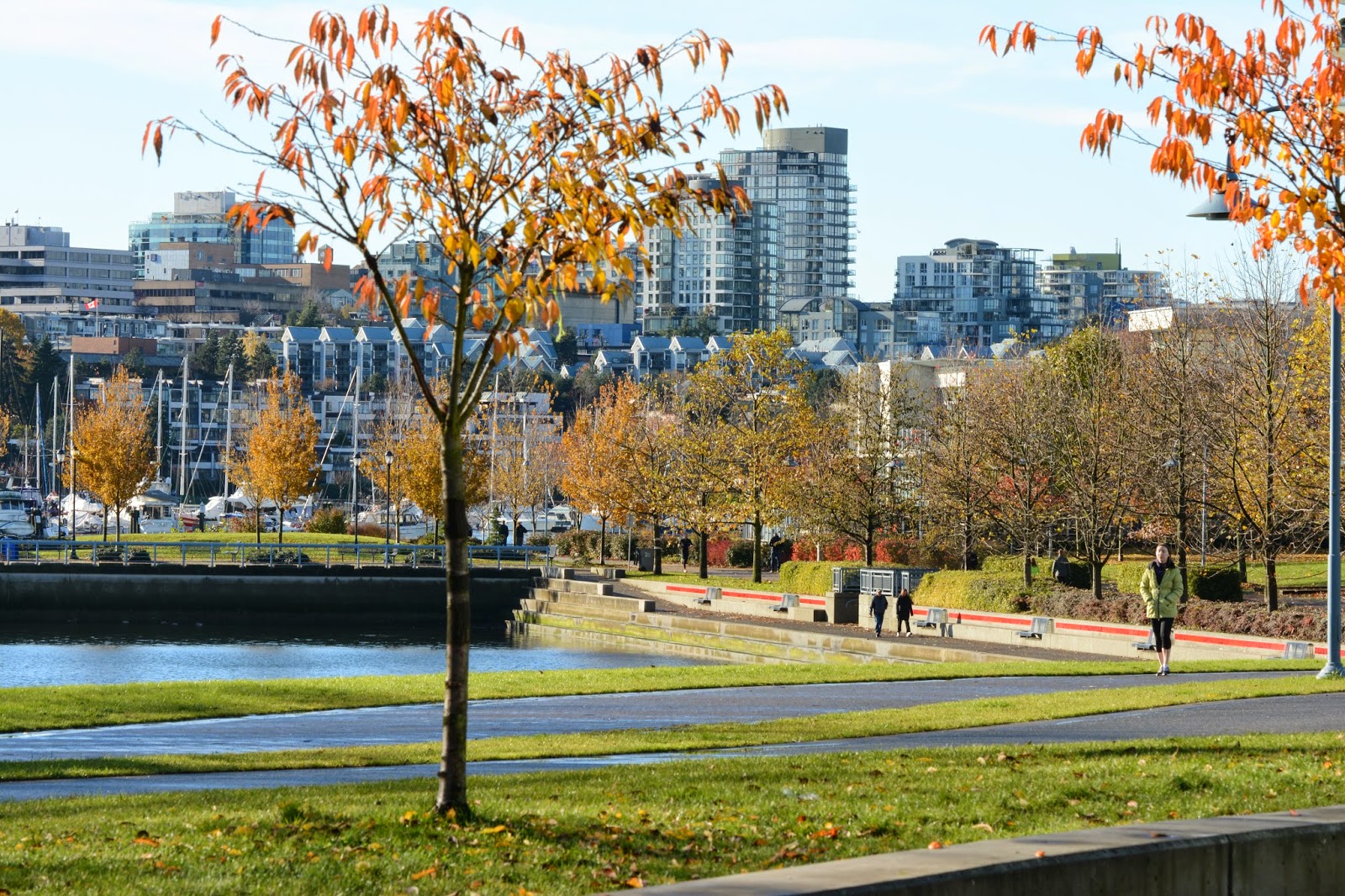 Later, from our apartment, a house sparrow against a blue sky. 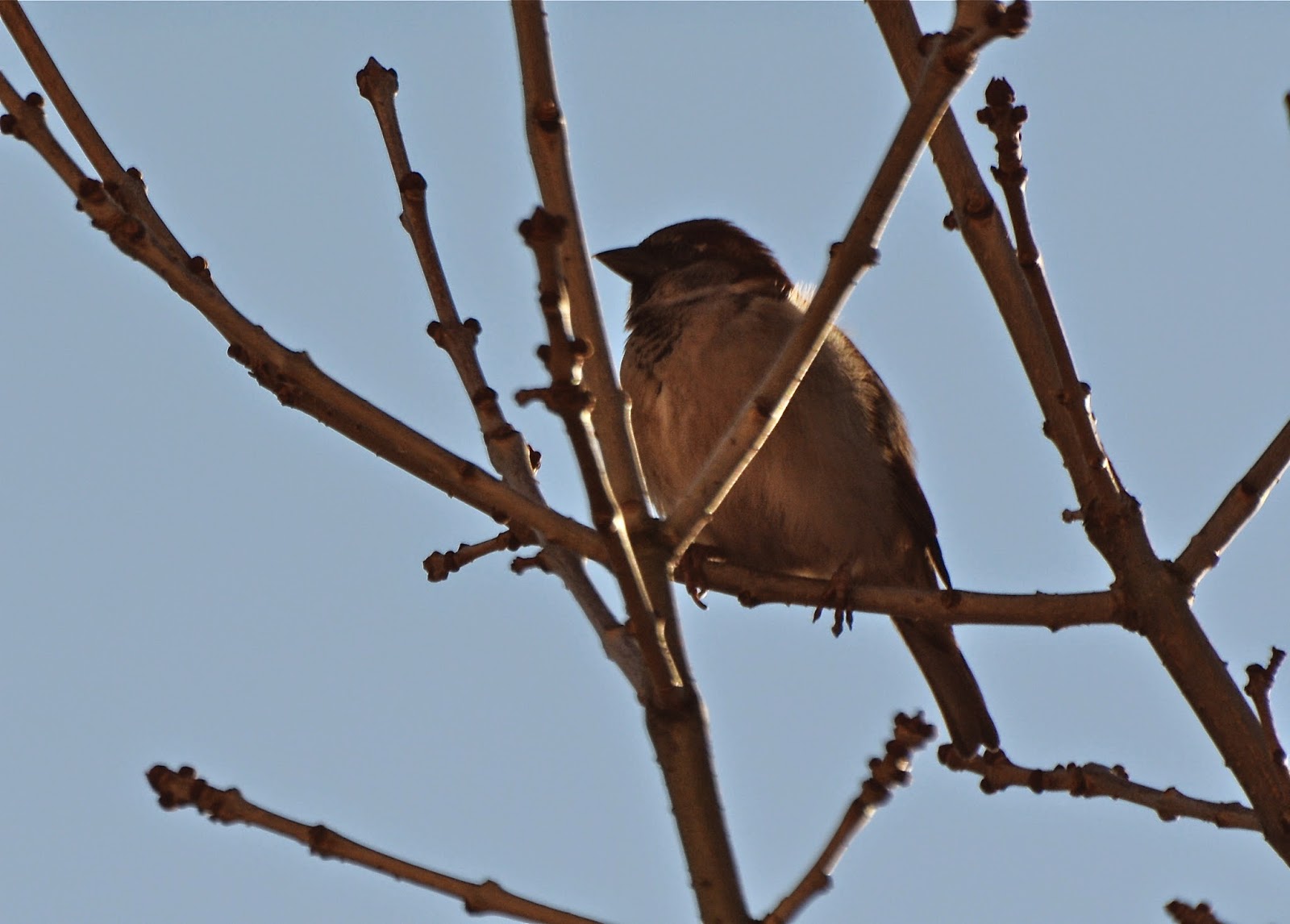 And still later, we biked along the seawall, stopping here to admire the first snow in the peaks of the North Shore Mountains. 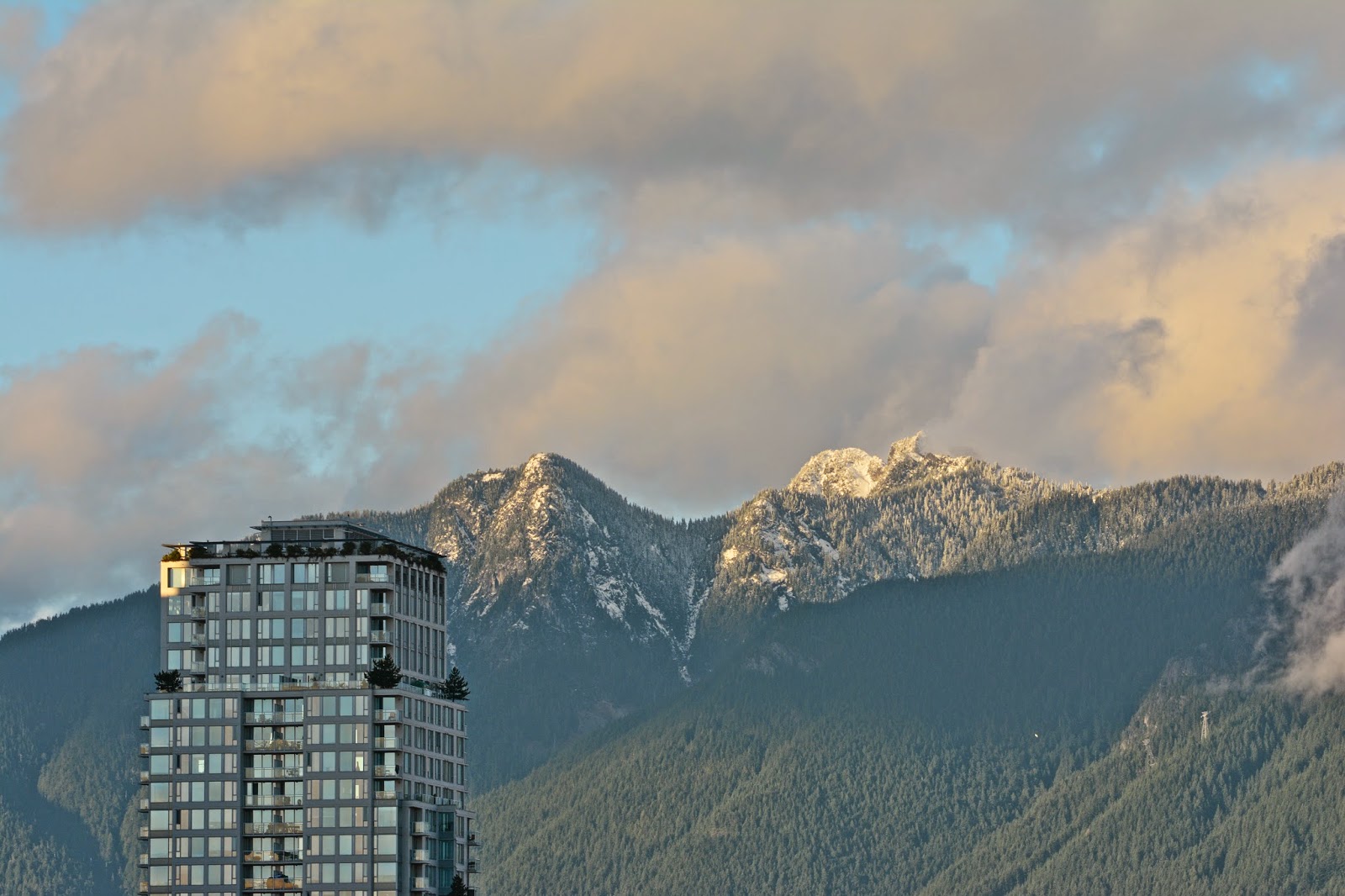 The sun was beautiful but temperatures were cooler than we had expected. Black Jack mostly snuggled down in her jacket with blue cover on top, but she sat up just as I took this photo.  That's Bill's hand holding the bike steady, and all you will see of him in this post.  Even the best model deserves a day off once in a while :) 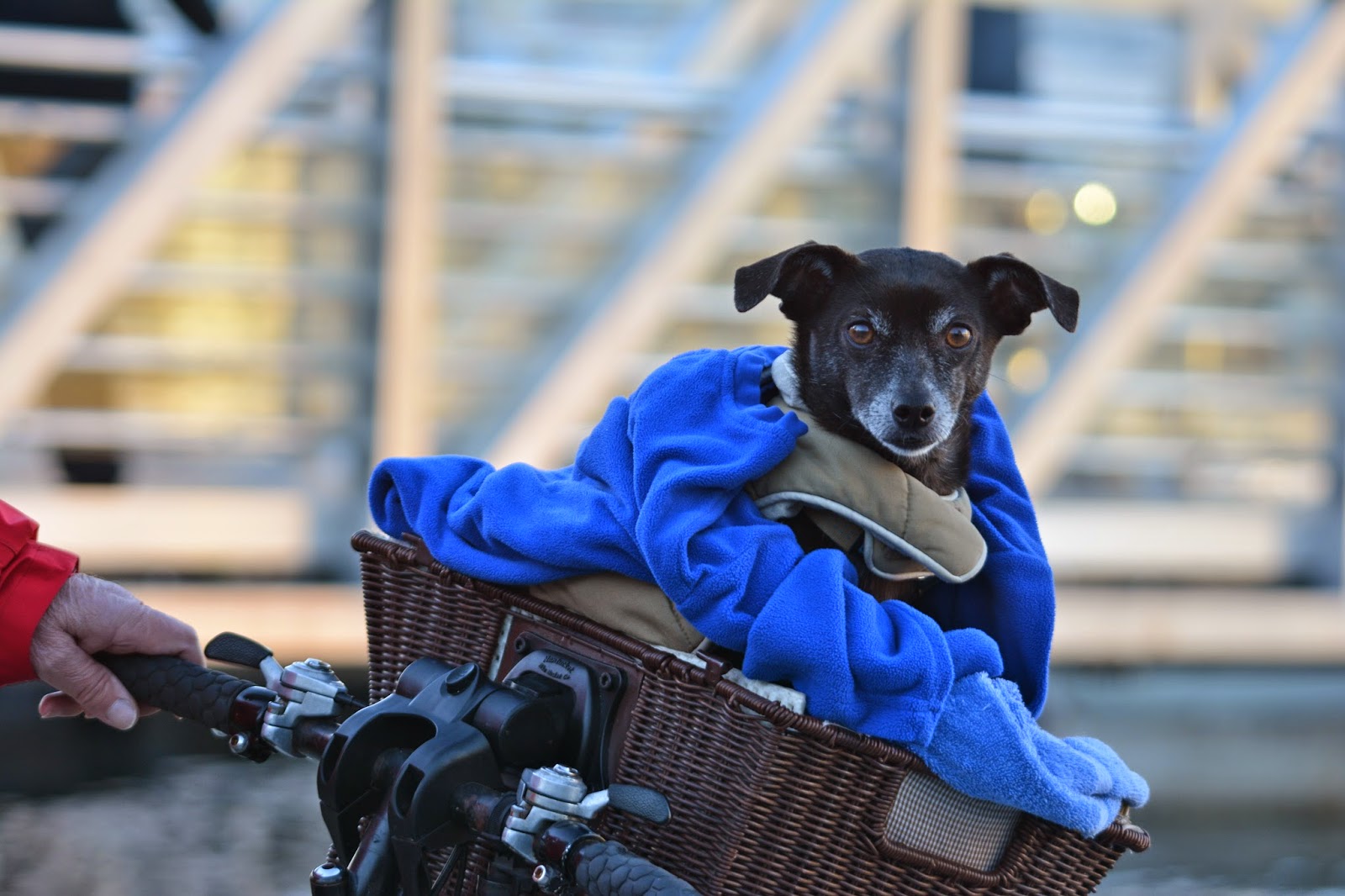 All of the high-rises in the area have a blue tinge to them.  With so many windows, they pick some of that up from the sky and the water.  That's a ramp off the Cambie Bridge at the bottom of the photo. 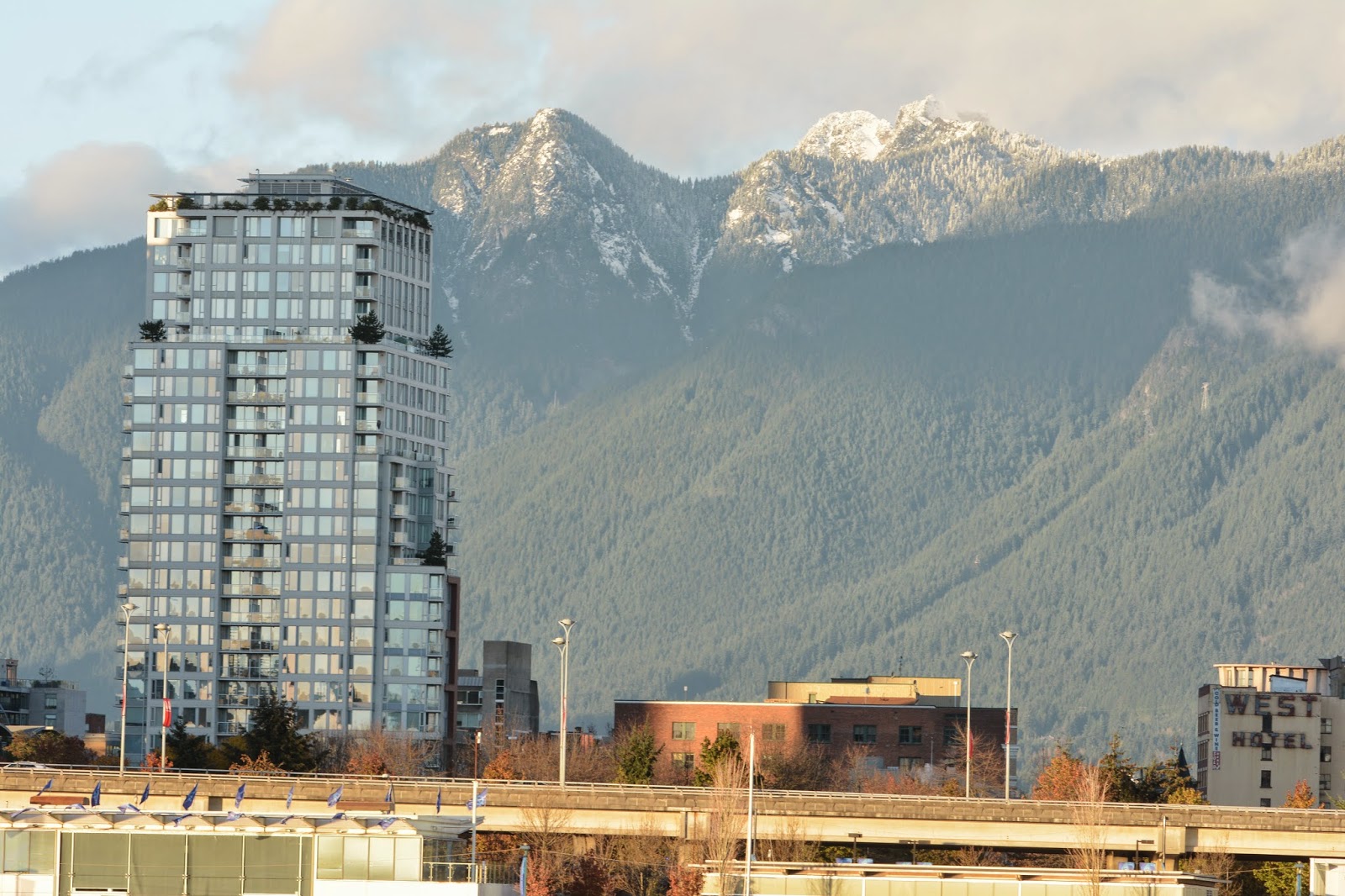 Bill pointed out the beautiful light hitting The Edgewater Casino across False Creek, and I noticed the Olympic Stadium behind it added more layers and designs. 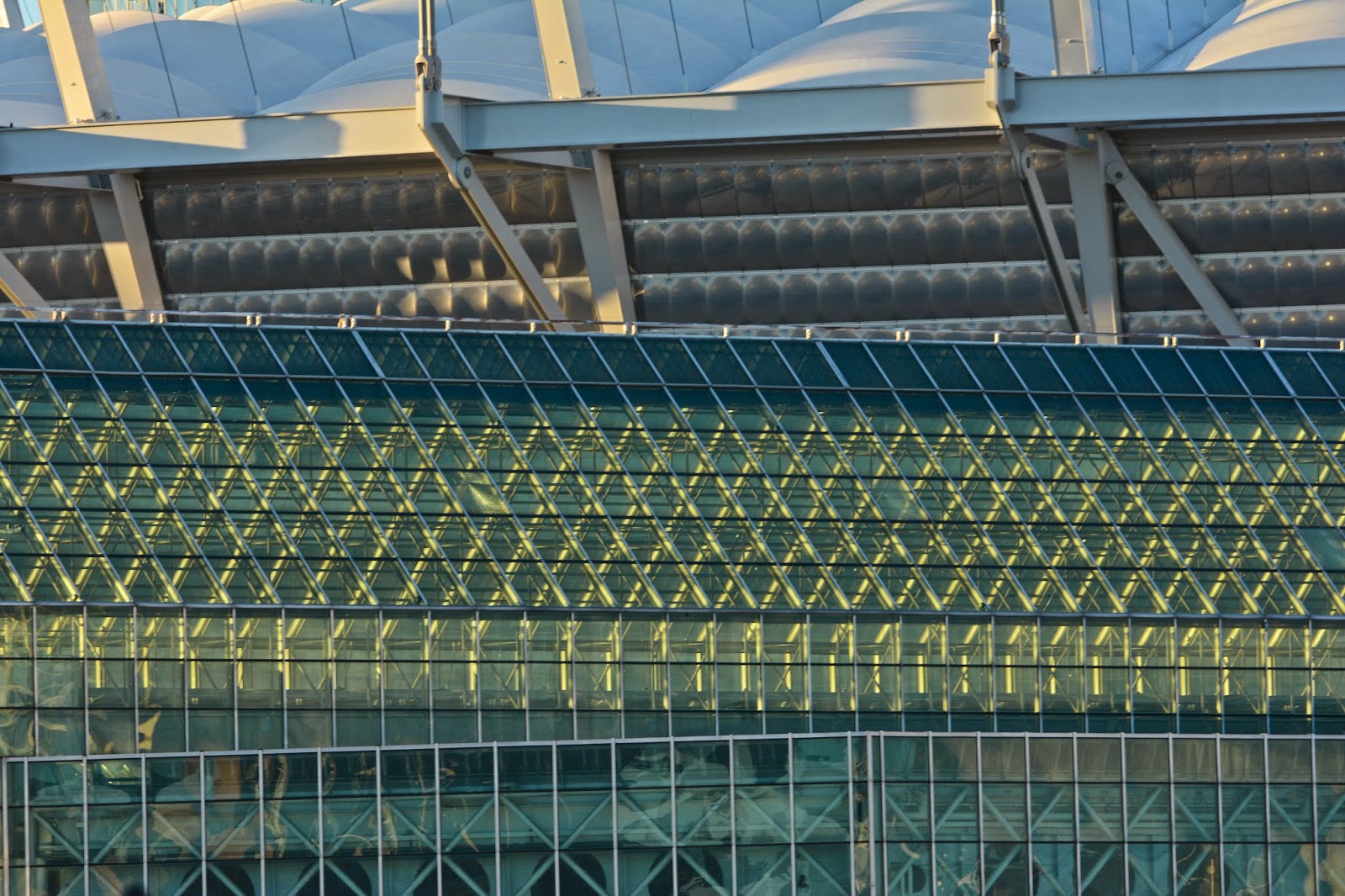 A few more layers were added as boats passed by. 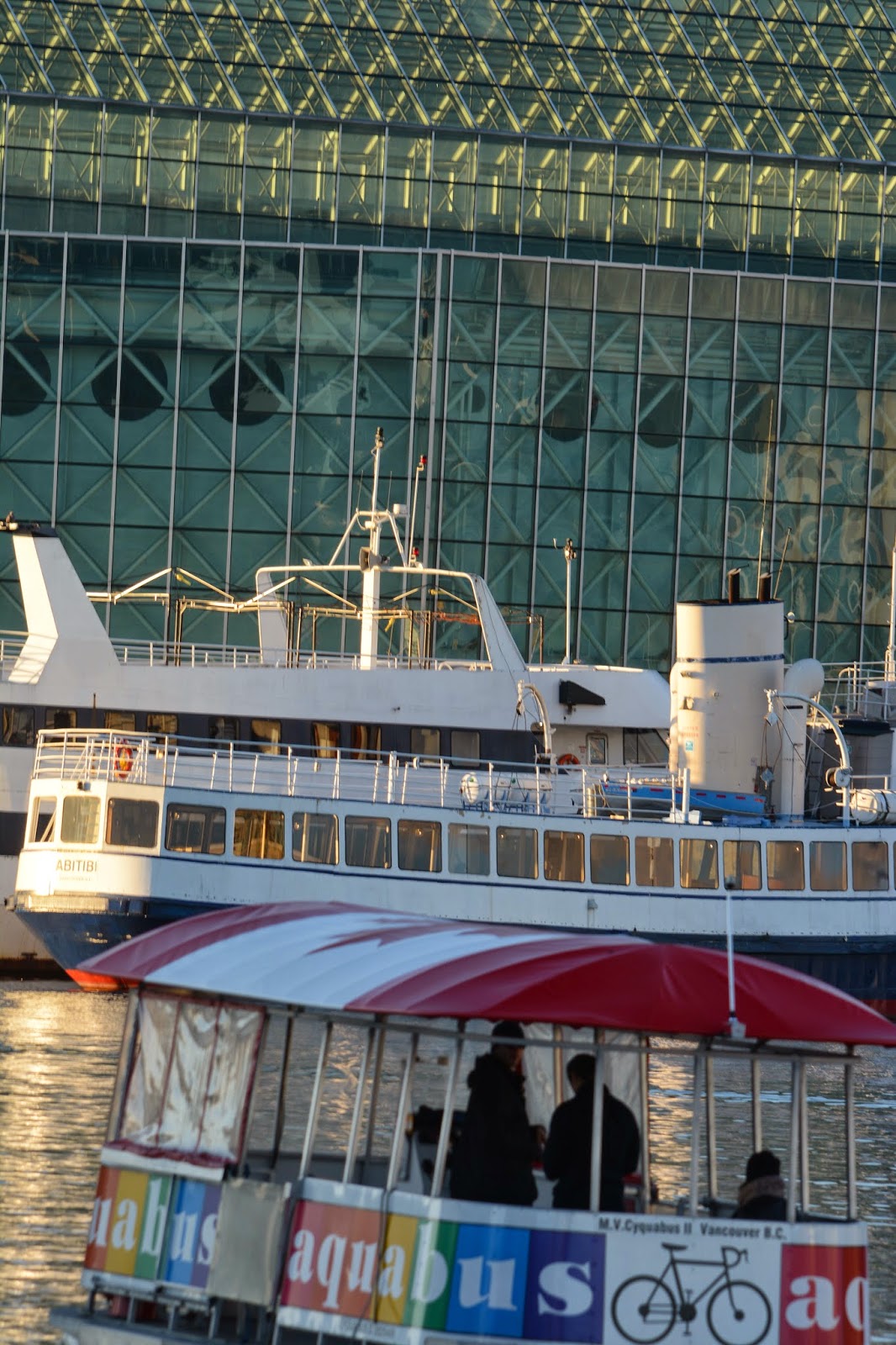 In fact, as I went through my photos, I began.. 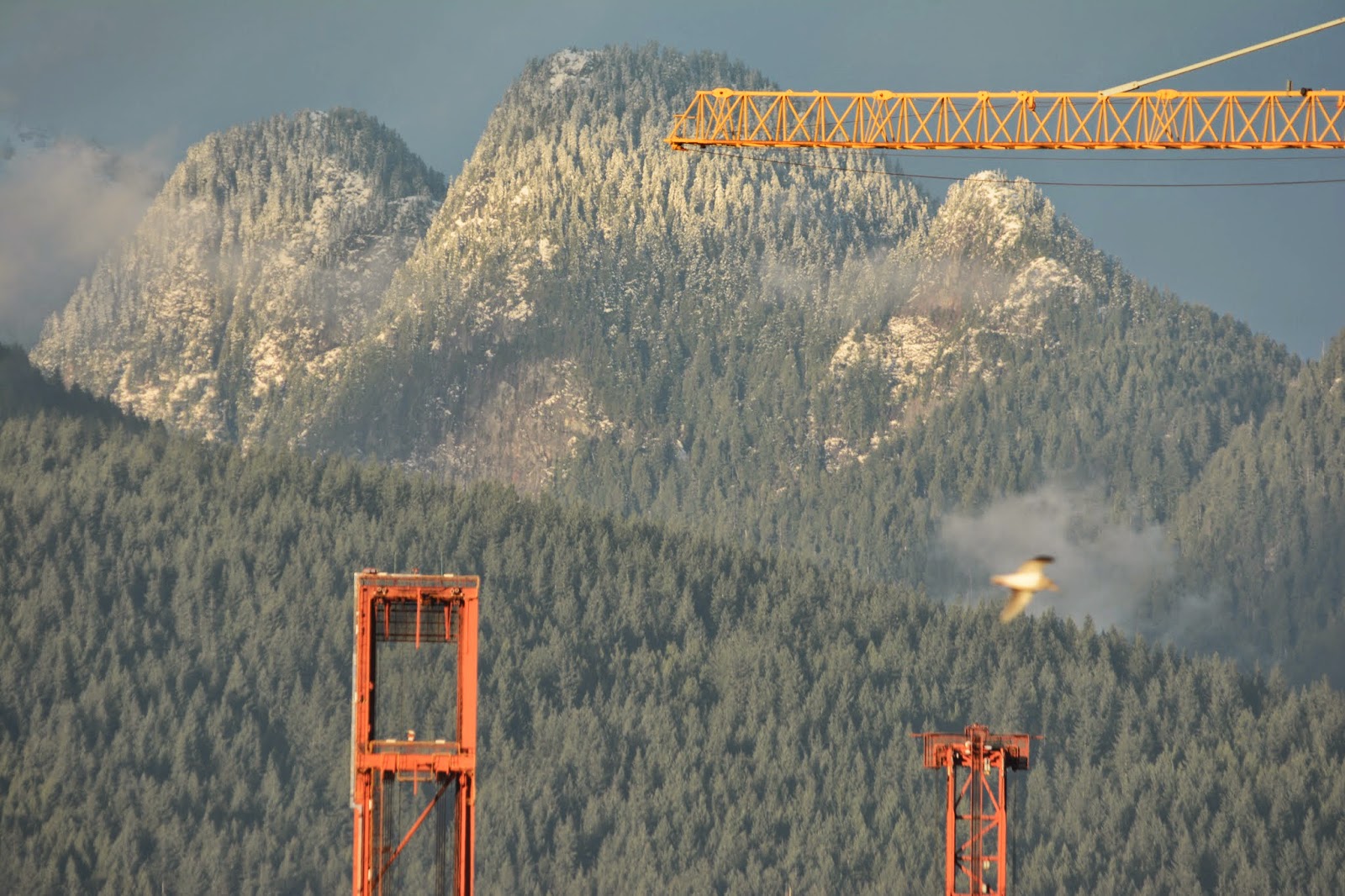 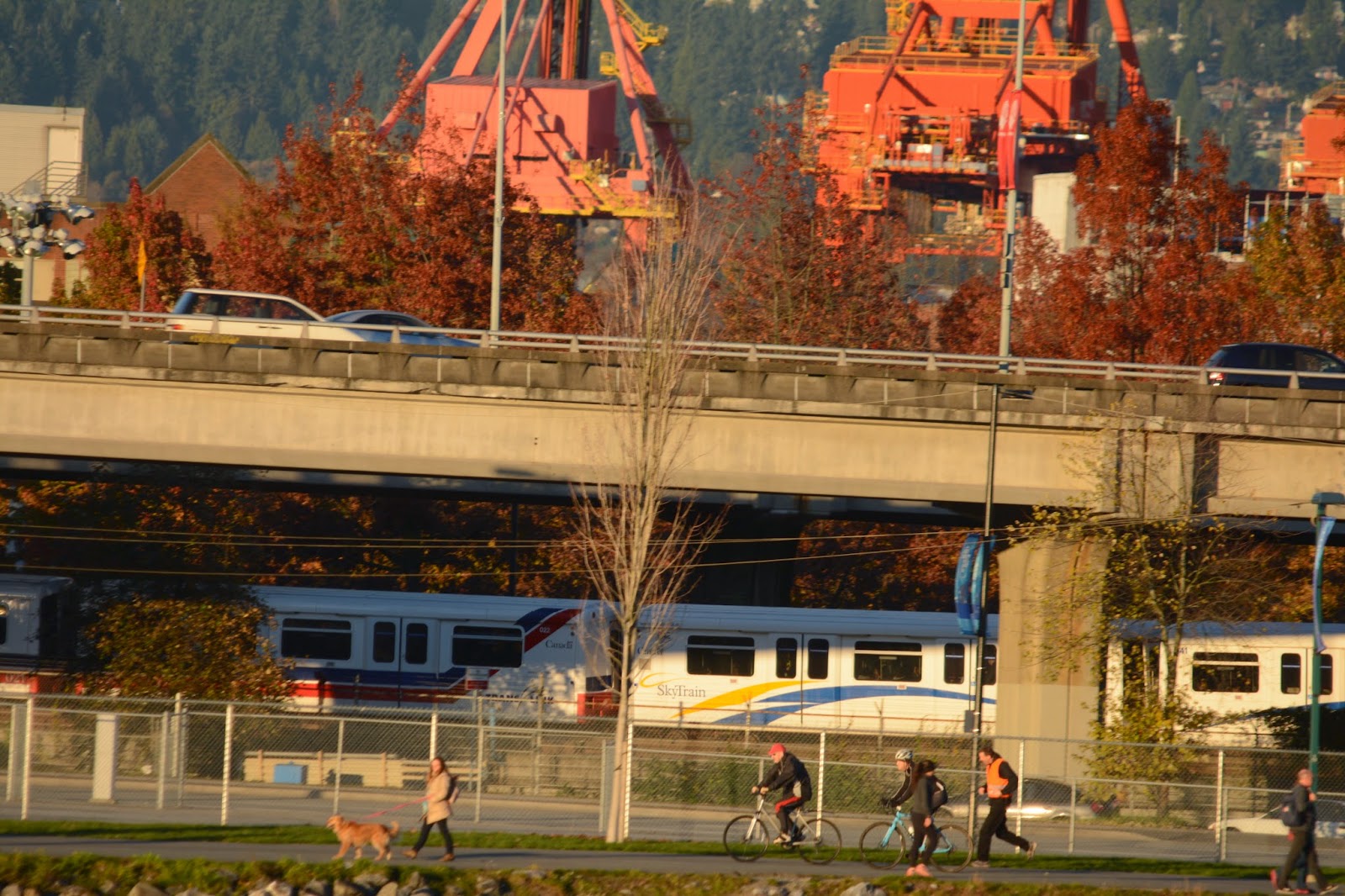 and modes of transportation everywhere.  Across the water, we could see the skytrain (with blue arc), cars, walkers, cyclists and runners. 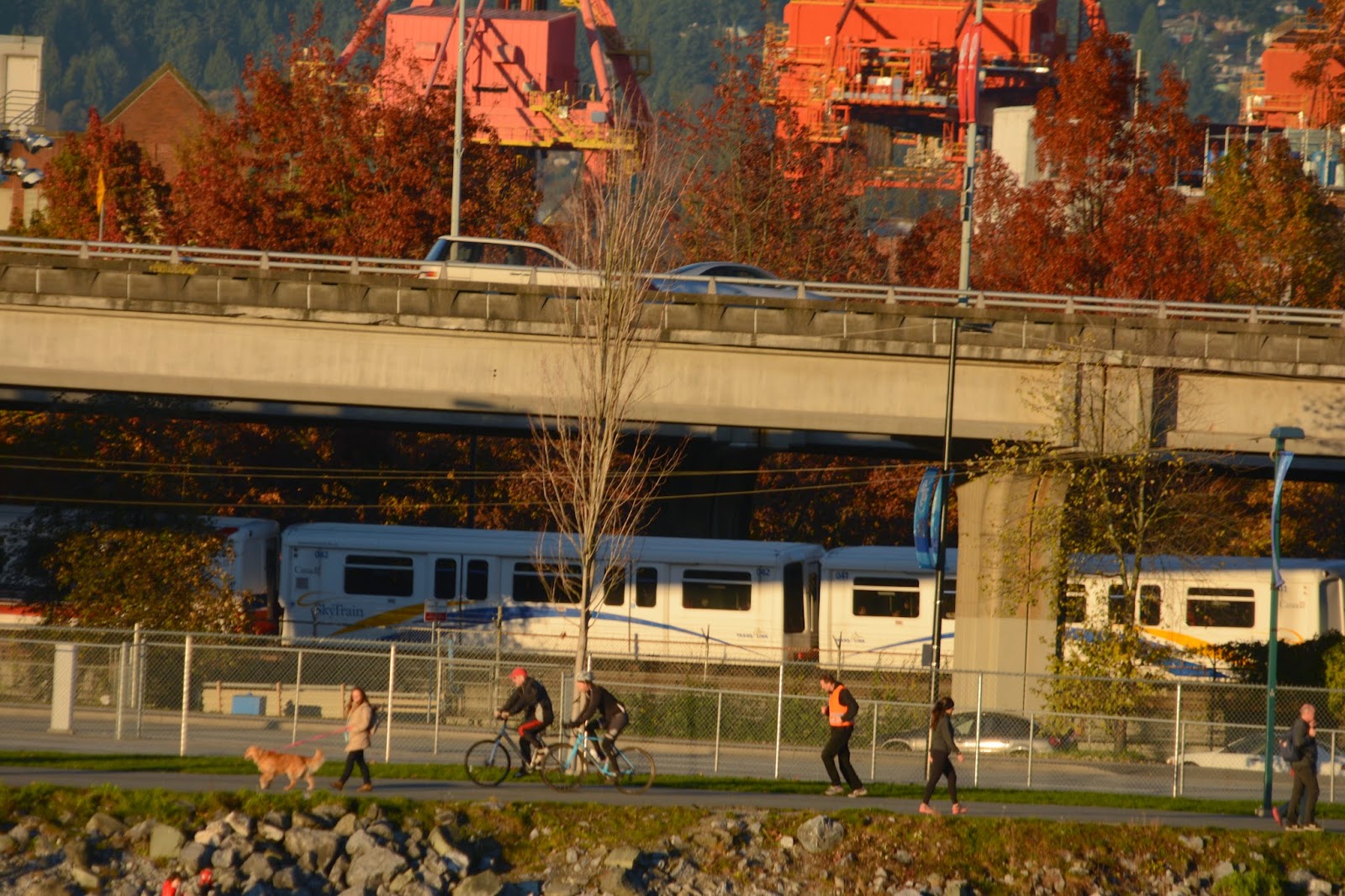 And the three cranes, viewed, it seems, from just about every vantage point in Vancouver.. 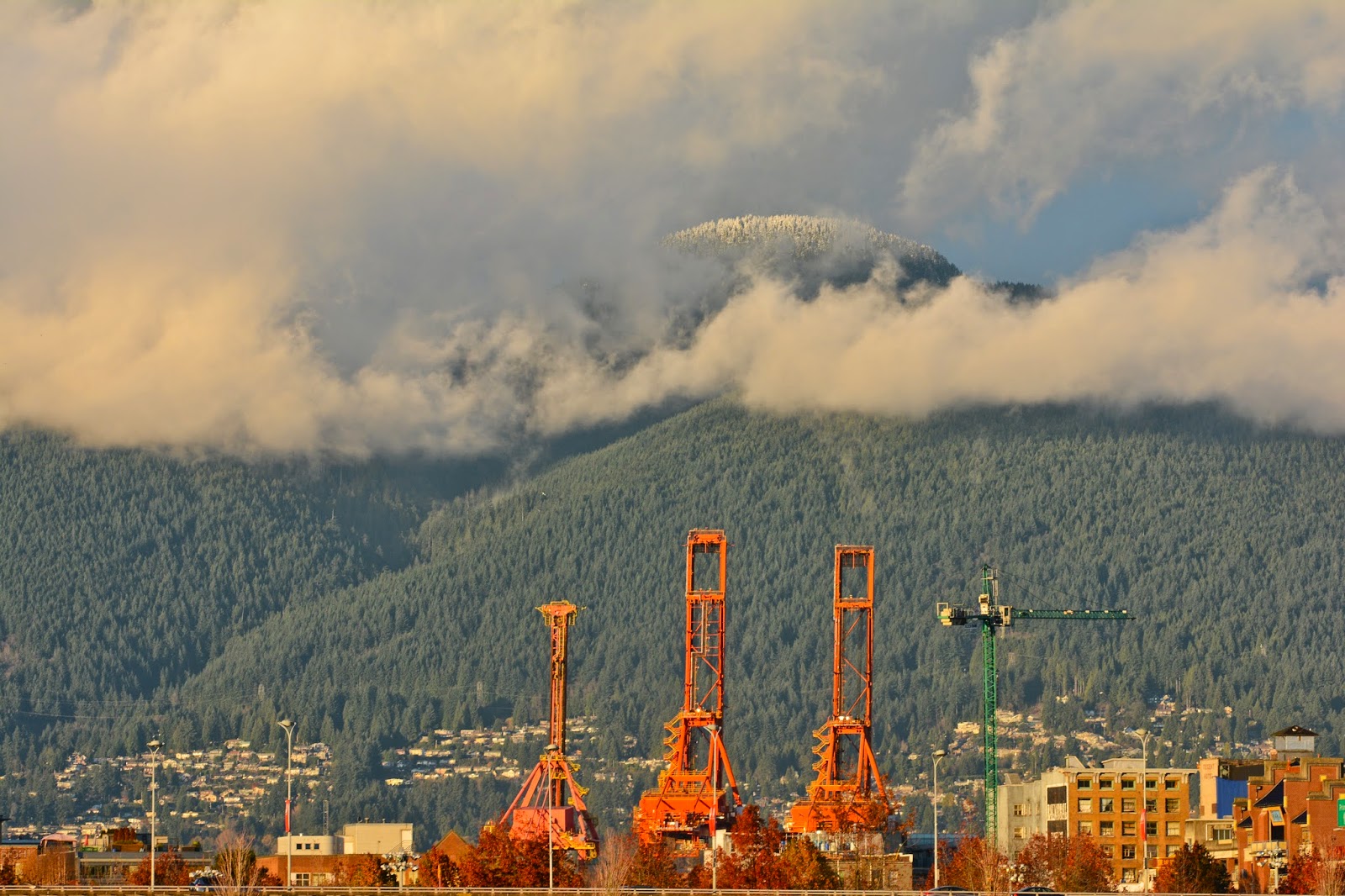 rose mightily behind the bridge, though not so mightily that they could dwarf the spectacular mountains. 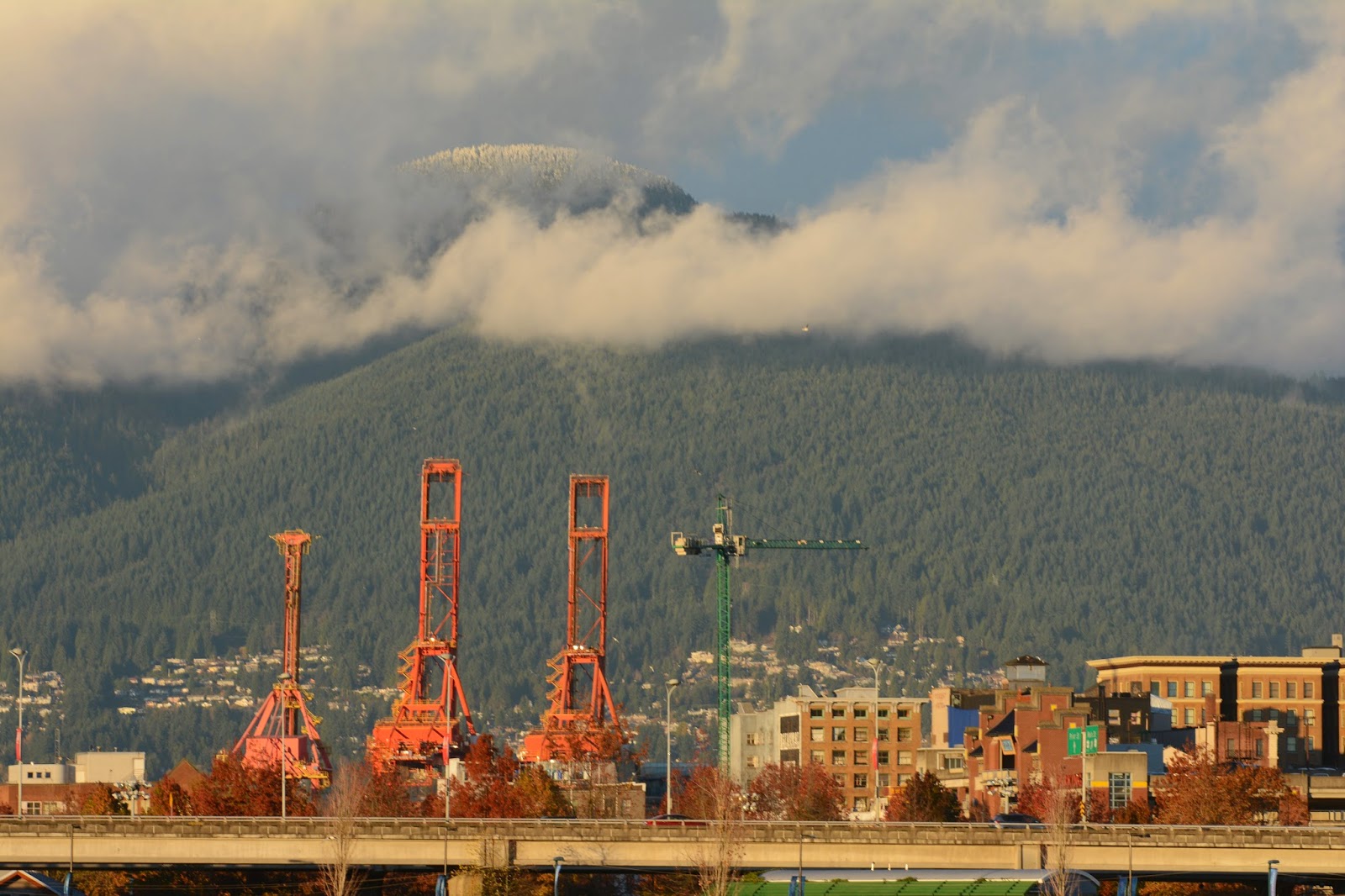 You may have noticed that the blue has been fading out a bit, with only the lightest tinge in the sky in this last mountain shot.  It was disappearing as we stood there, perhaps heralding the rain that has begun in earnest this morning. 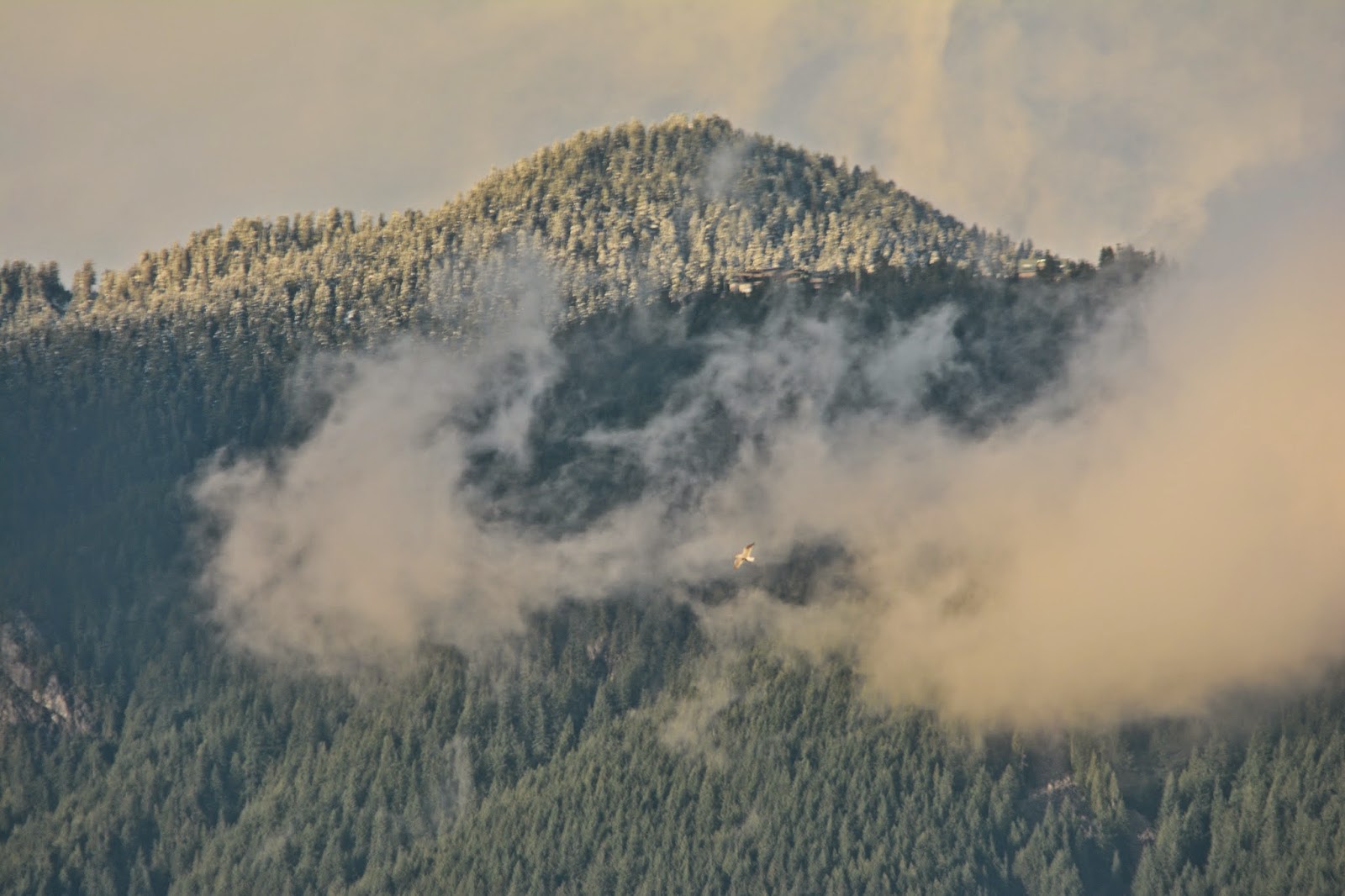 The last blue-content for this post is in Jennifer Harrison's latest art on the sign in front of our favourite café-gallery, where we headed after our stop.  She says it takes her about an hour to do these drawings and I enjoy seeing every one of them.  If you came for the blues, you may want to stop reading here and step on over to Sally's Blue Monday meme.  Many thanks to her for hosting! 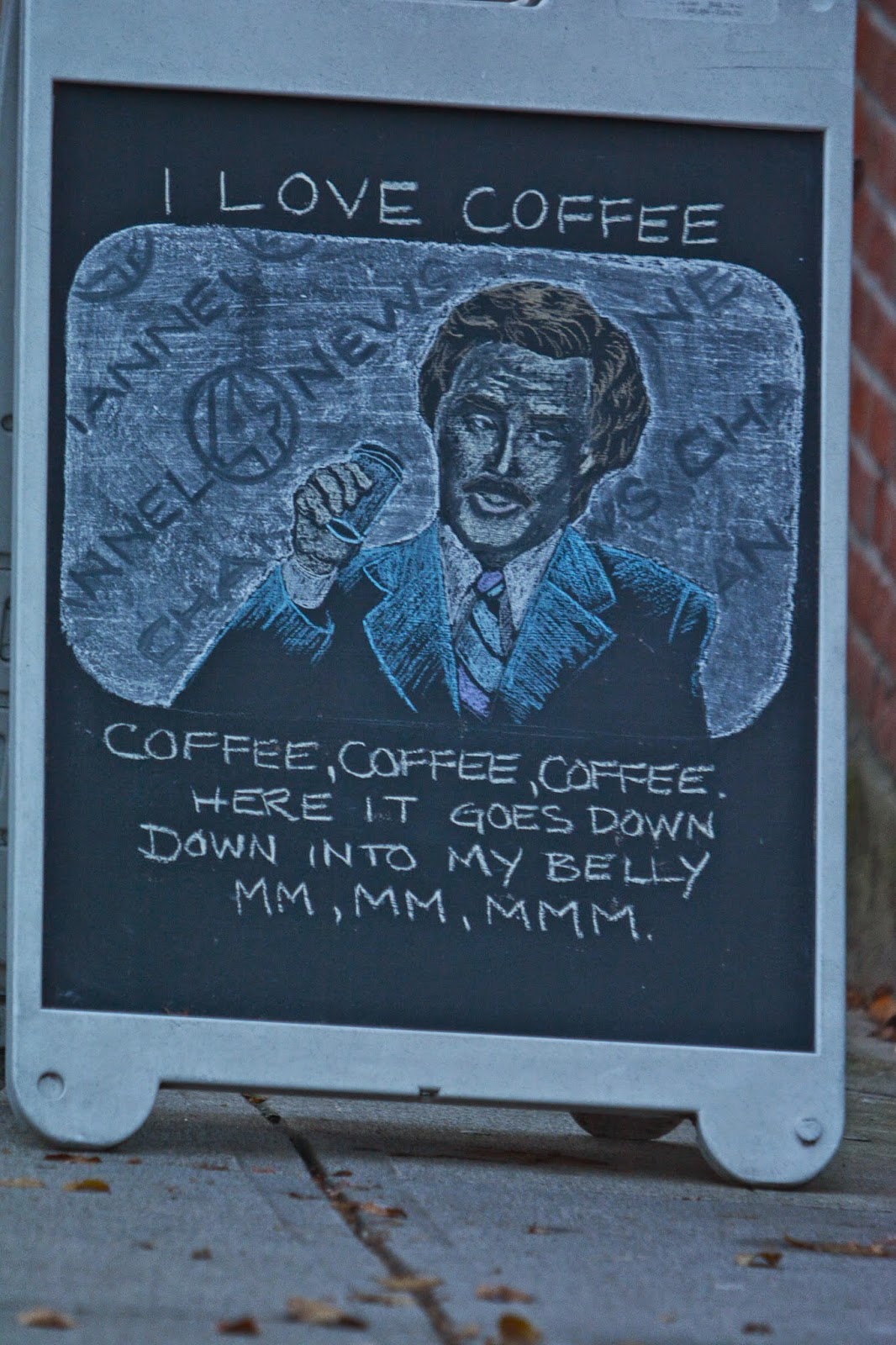 These last few photos were the ones with no blue in them, but each celebrates something about the conclusion of the Autumn season here in Vancouver.  Textures of a falling leaf.. 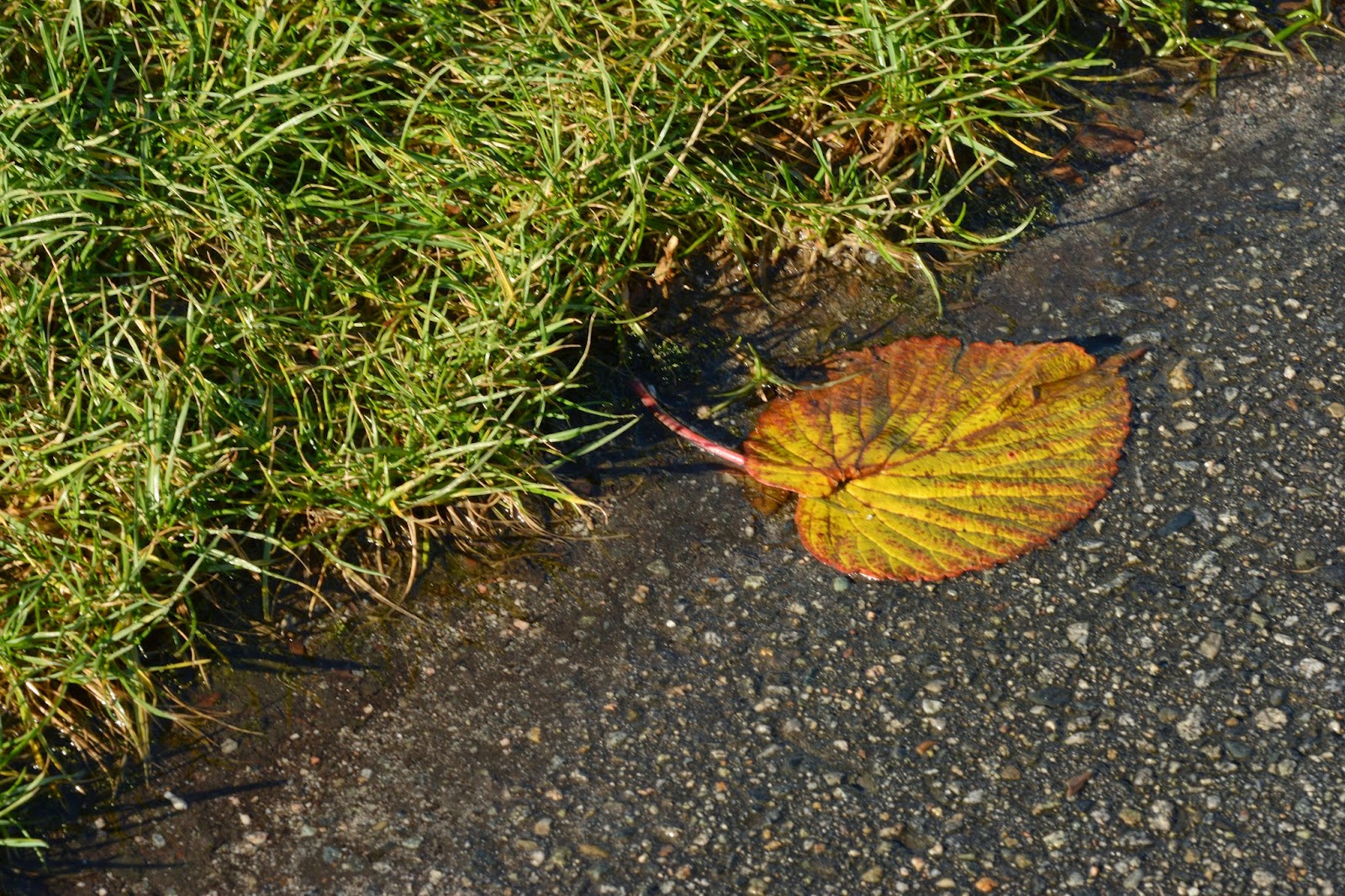 against sidewalk and grass, 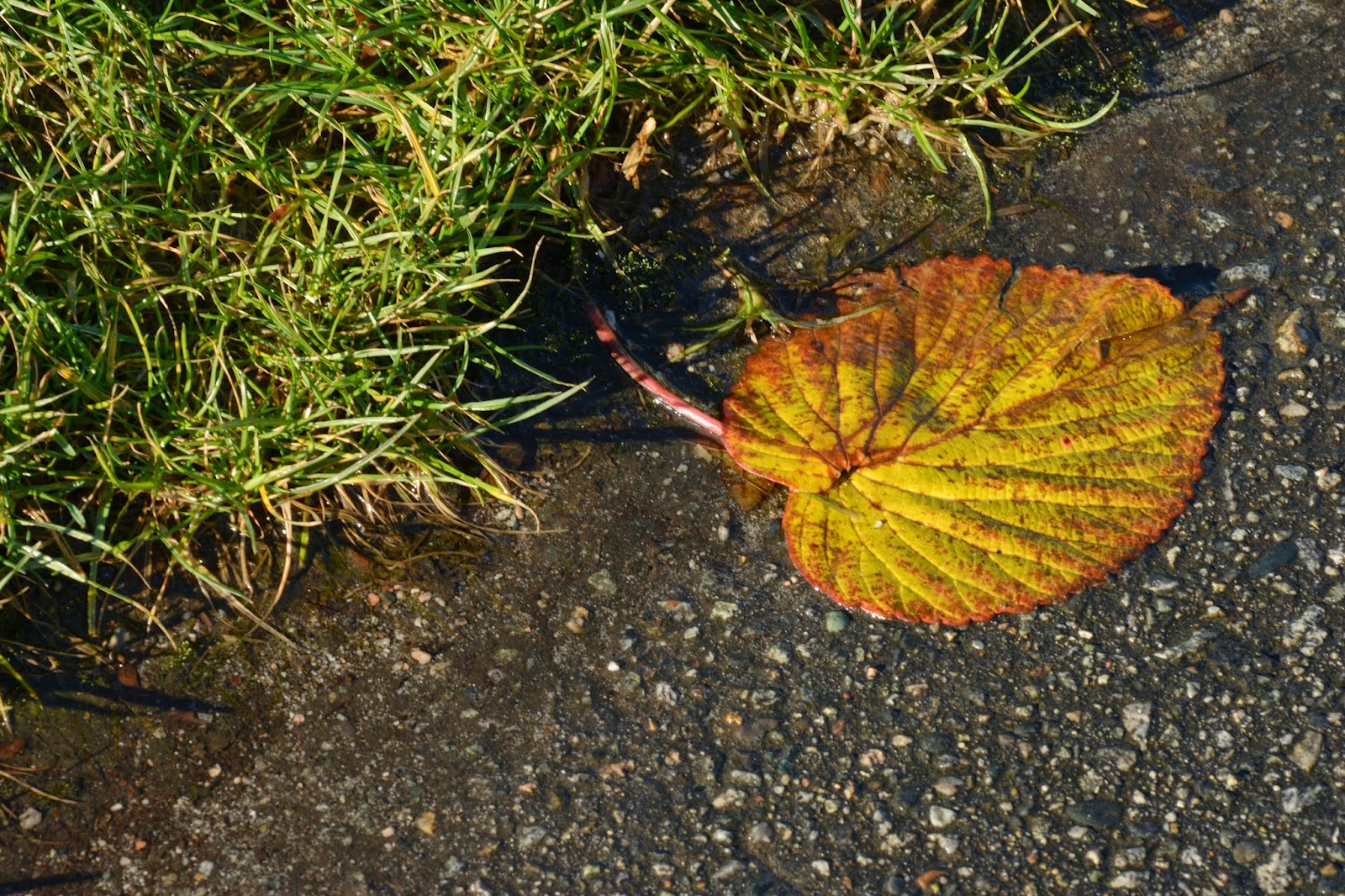 and a few trees still reluctant to drop their leaves, 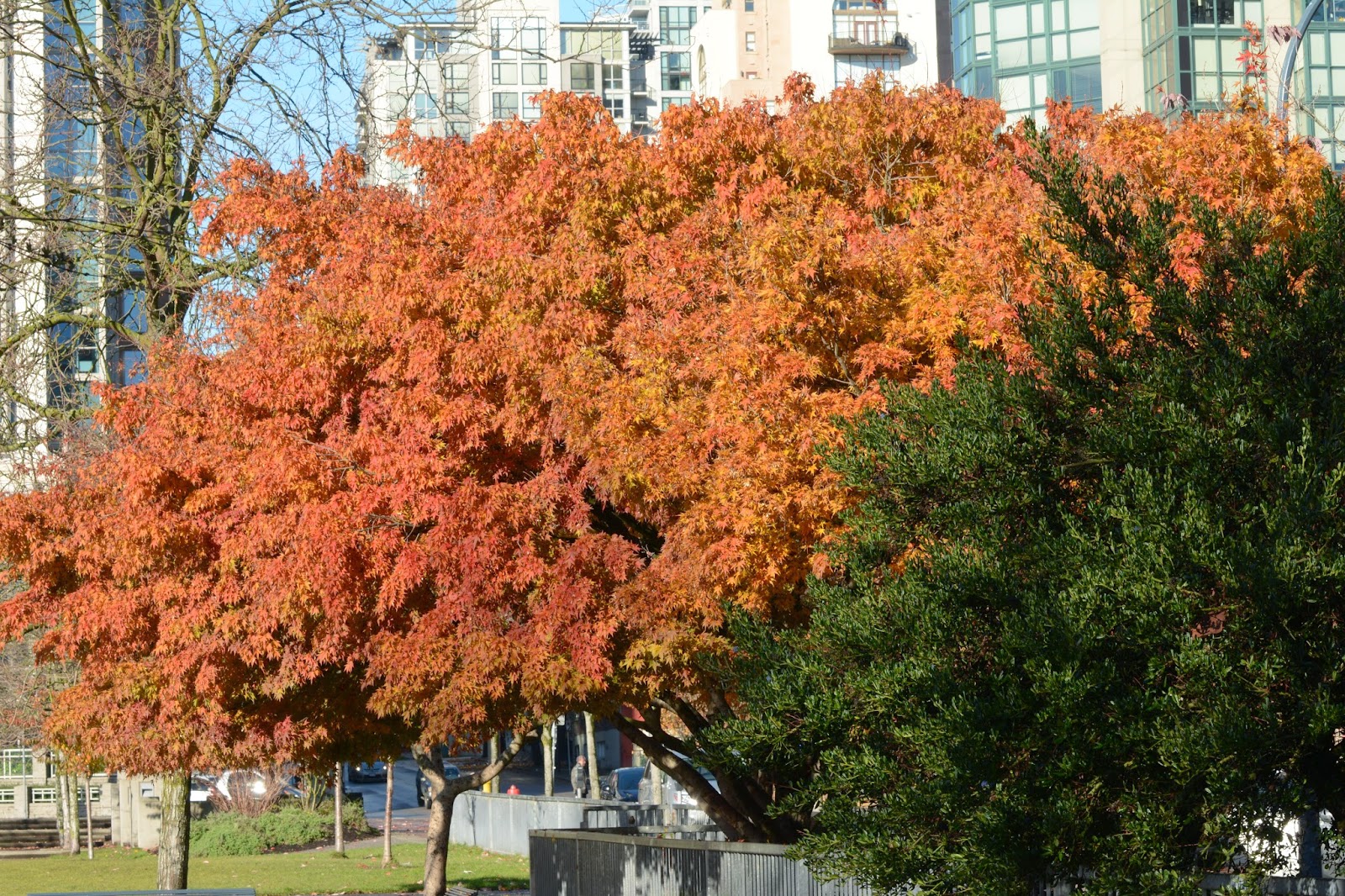 almost on fire with the bright sun yesterday morning. 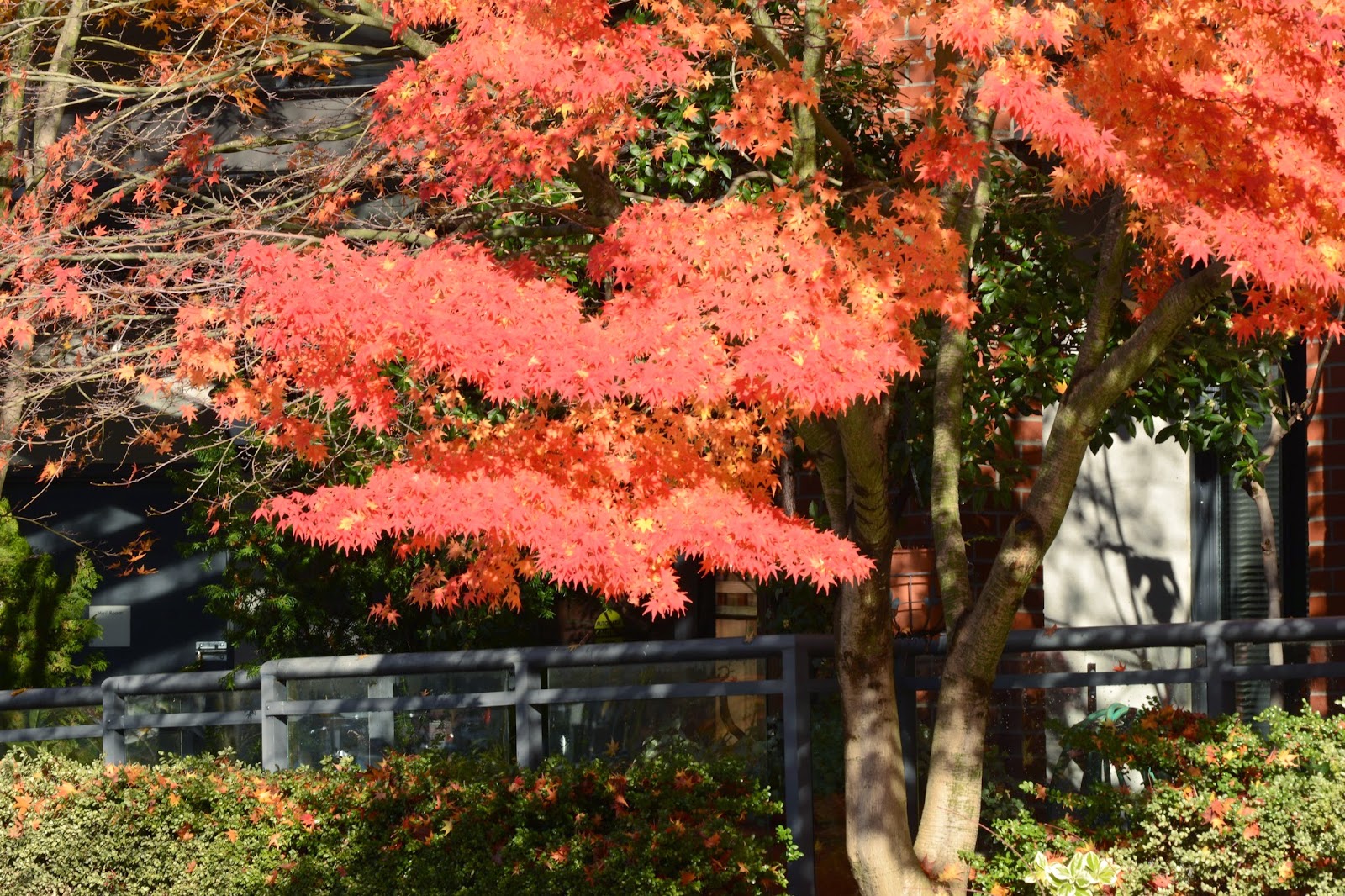 The leaves that did drop left magic in a star-sprinkled sidewalk. 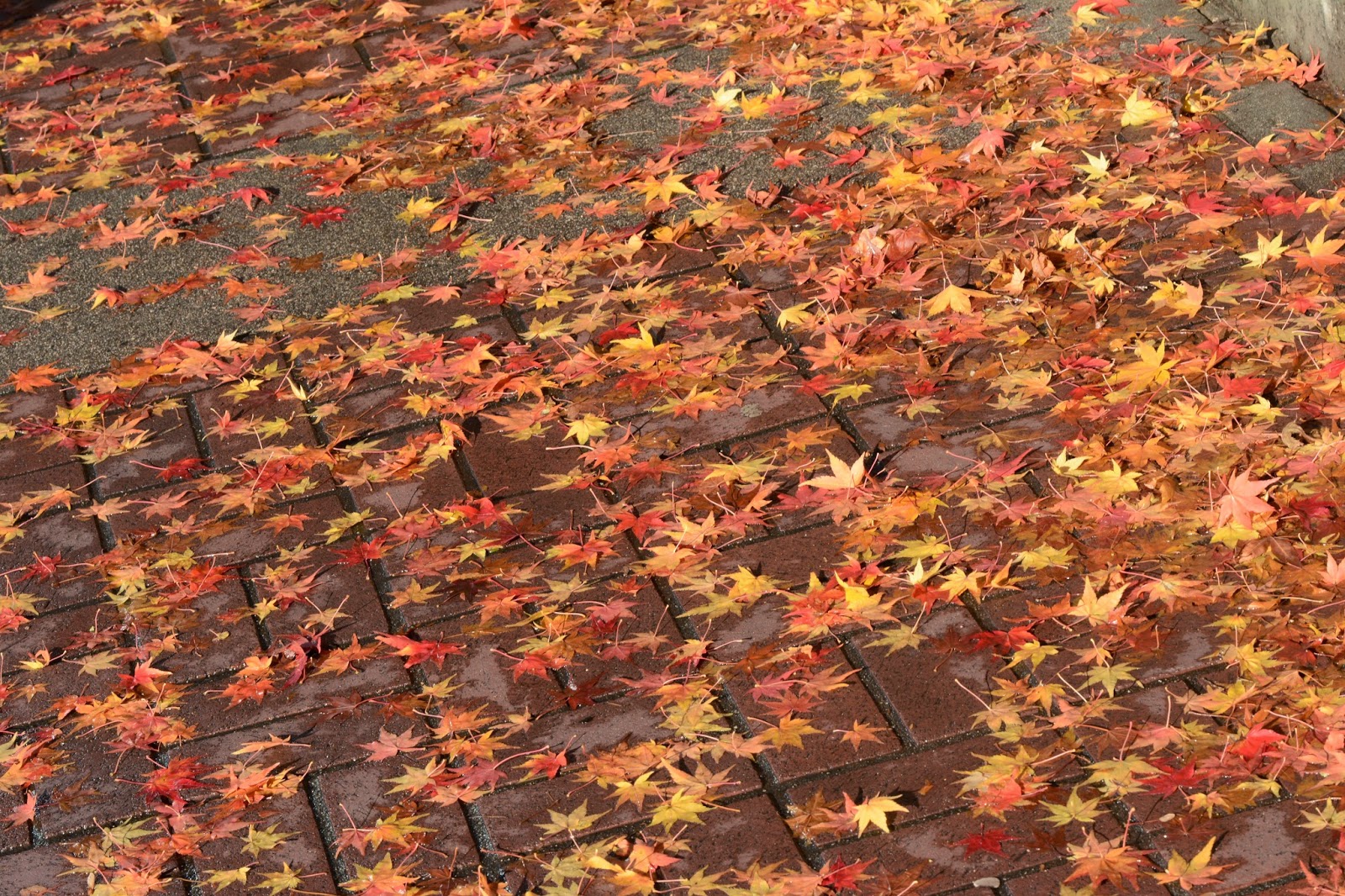 I wish upon this star for a peaceful and happy Monday for each one of you!  Thank you so much for stopping by! 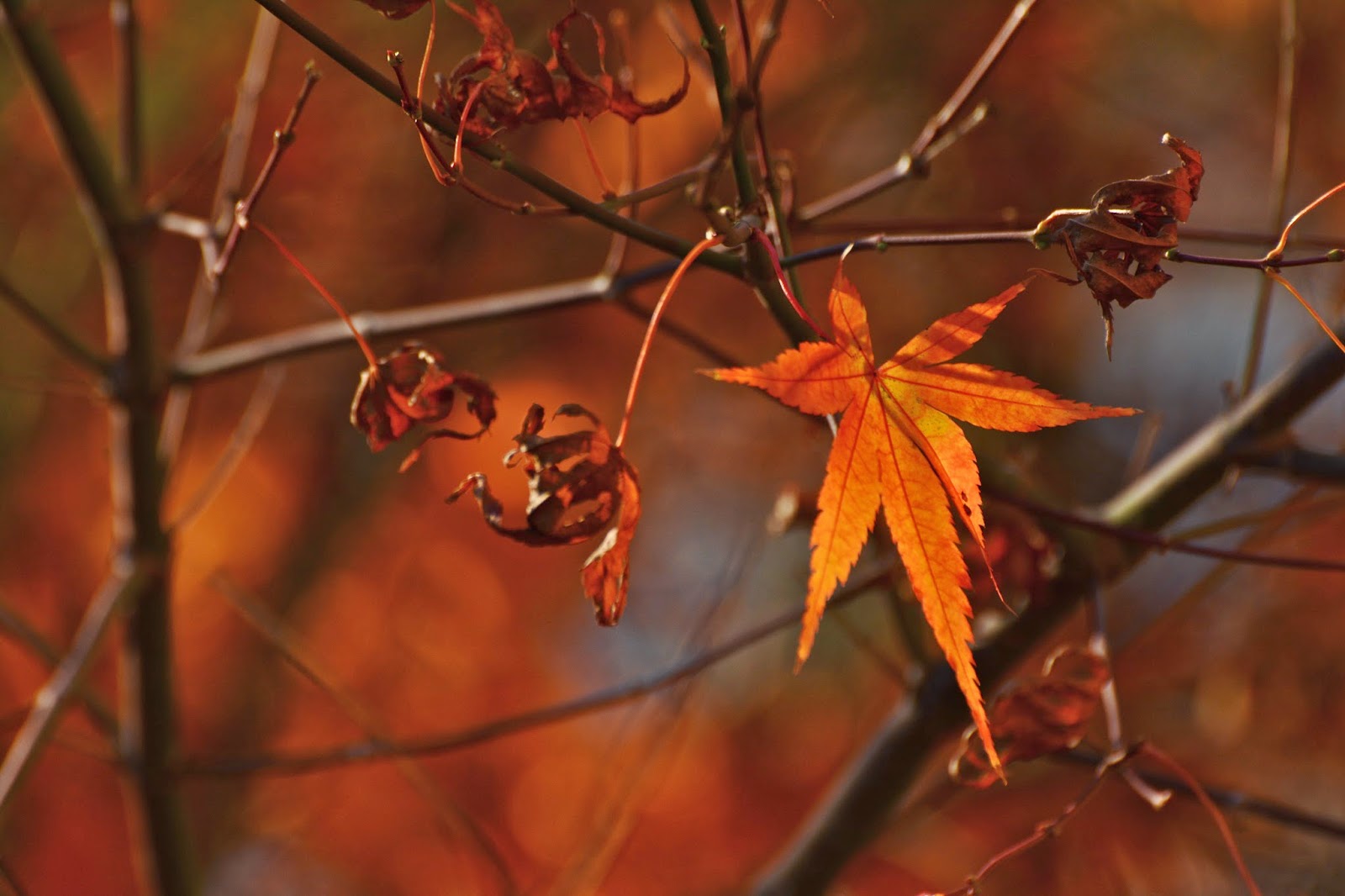