"Do you have any ideas for the letter T for ABC Wednesday?" I asked Bill as we sat in Harrison Galleries yesterday.  "What about tidal wave?" he responded, as he looked at one of Chris Dahl's paintings.  Hm..  the title of the painting doesn't begin with T but it surely does  show a tidal wave.  I have just learned that Chris Dahl studied with Takao Tanabe, a BC artist born in 1926 and still painting every day.  I can't show you his photo or any of his works, but if you love landscape painting, the link above will take you to a thought-provoking story of talent and tenacity.  Meanwhile, Chris Dahl's work is being featured for the next few days at Harrison Galleries.  He is one of the most versatile artists I've seen, with paintings of motorcycles, landscapes, musicians, dancers, athletes and guitars in the exhibit.  Well worth a visit if you have the time. 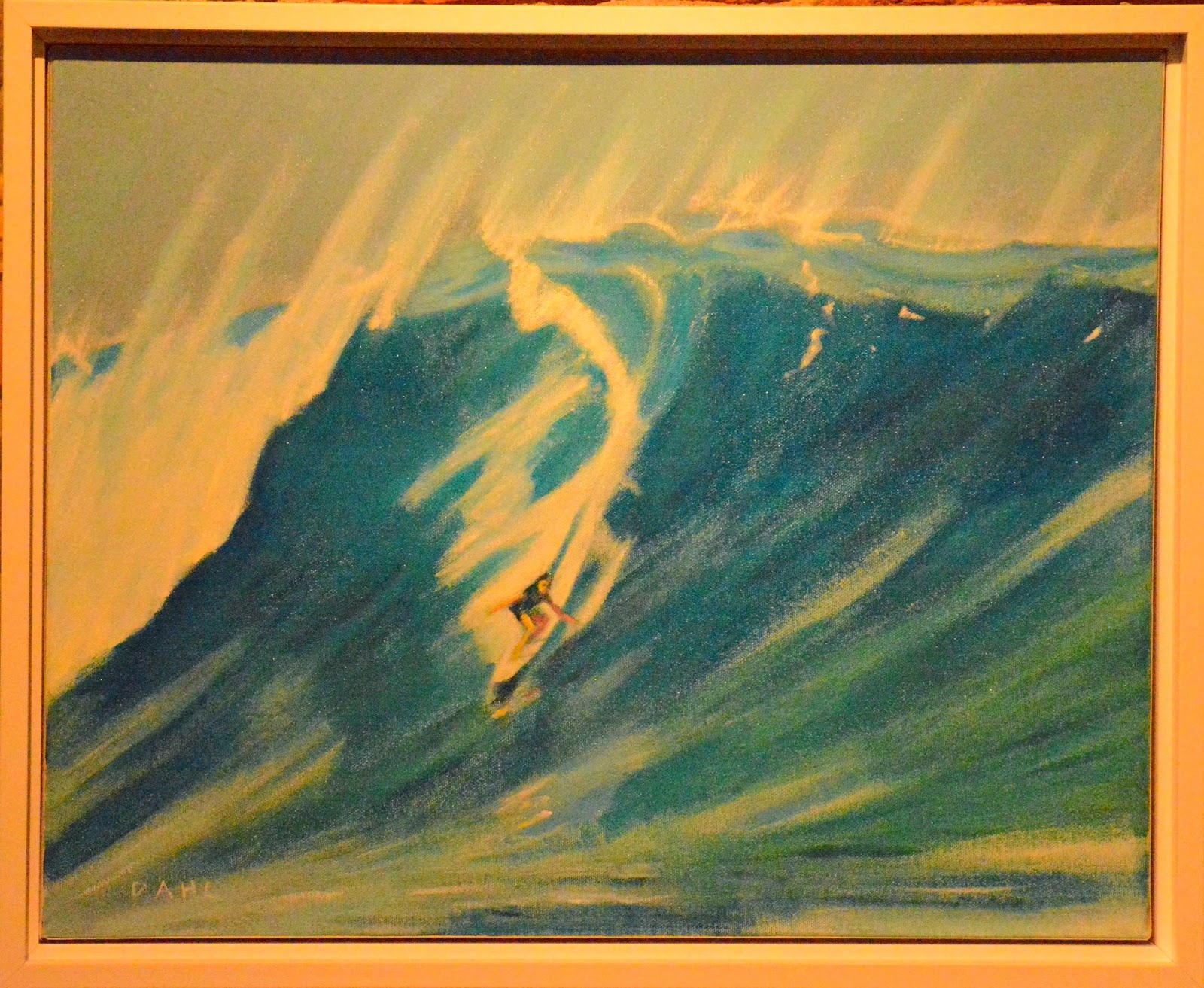 Perhaps you guessed that we were not able to get out on our bikes again yesterday.  The rain has been relentless, and today, the forecast includes a rainfall warning for Vancouver.  We carry on, though, happy to be able to walk to the gallery and play with Black Jack.  Bill teased her a bit yesterday, 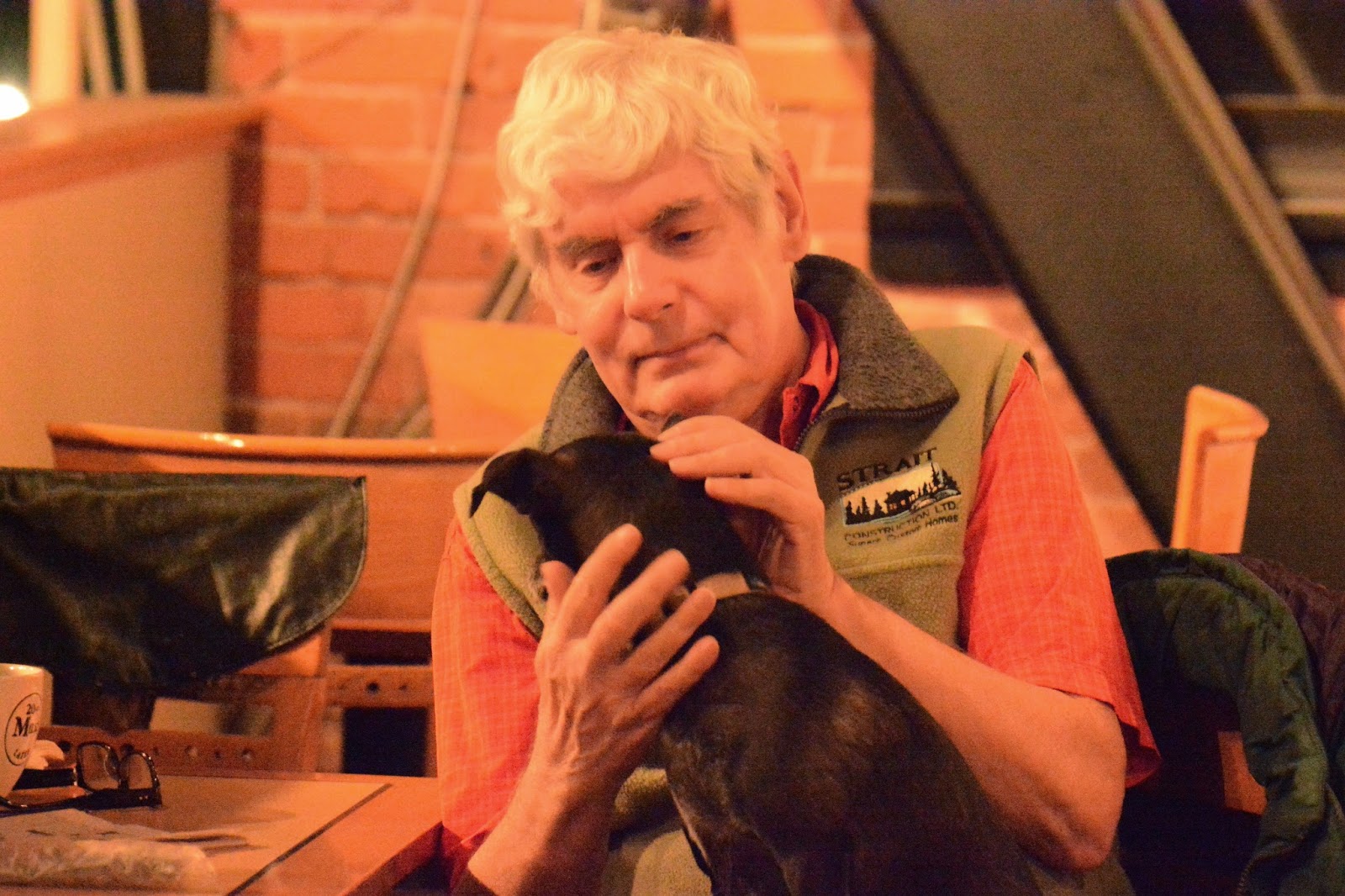 trying to give her Batman ears, 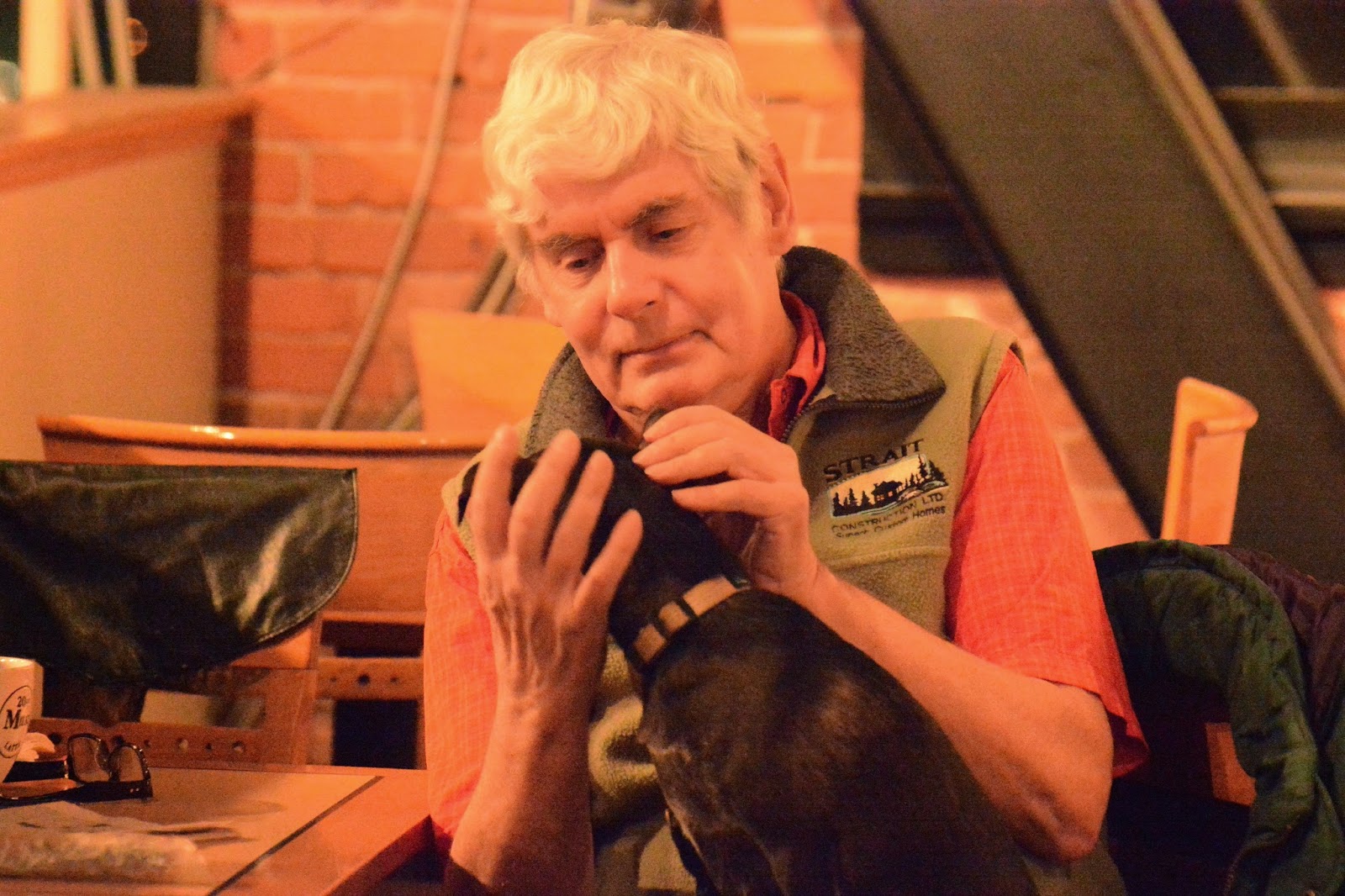 but she was a bit timid about the whole idea, perhaps even ready to throw in the towel, 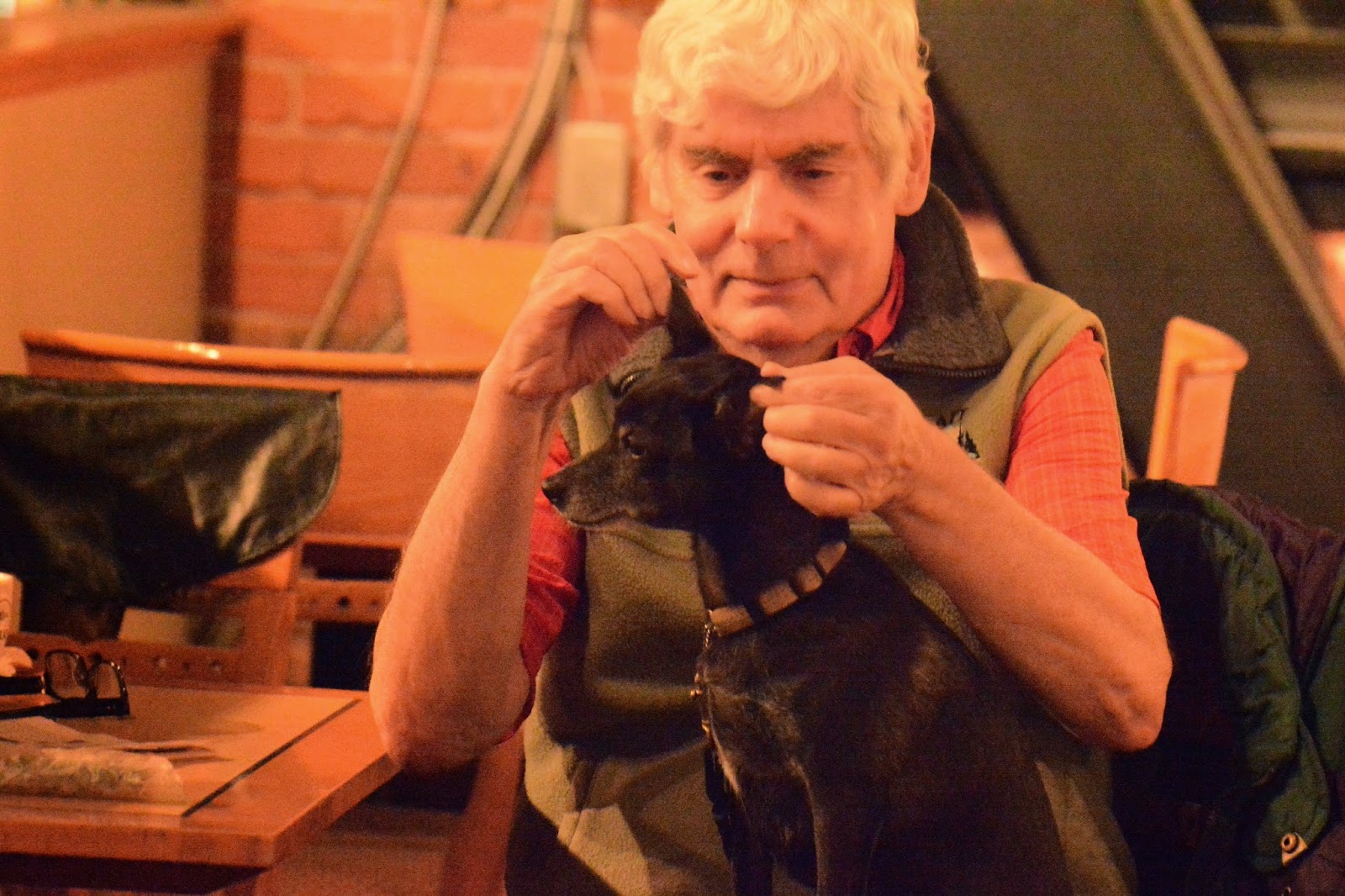 so Bill gave her a treat for trying.. 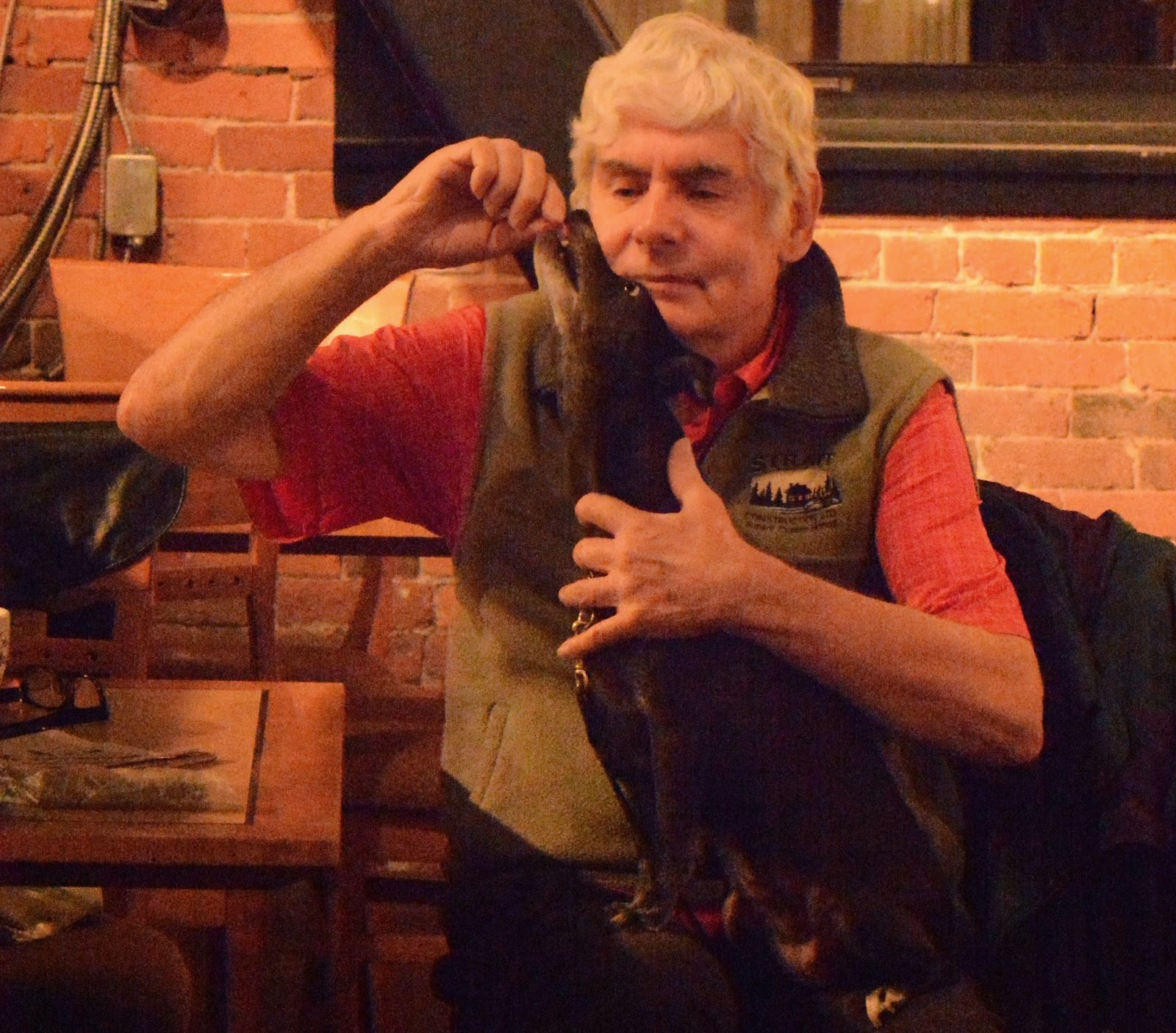 and then he gave himself a taste of his own treatment.  Note that Black Jack stared intently at the treats on the table, entirely uninterested in Bill's ears.  Love those two! 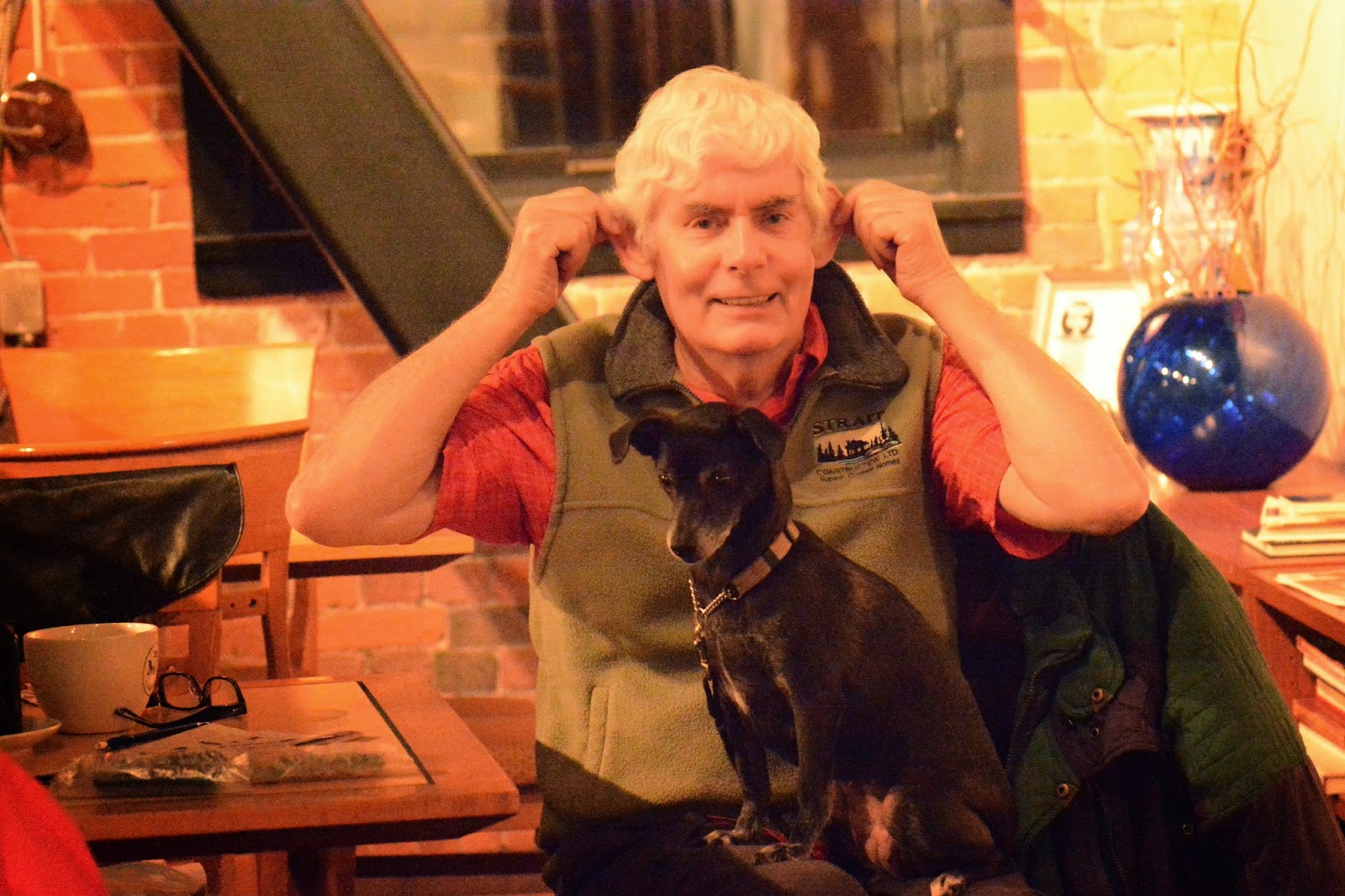 When it was time to leave the gallery, I put Black Jack's coat on her.  I don't know if this behaviour has turned up in any of the dogs you know, but she won't move when her coat is put on until we give her a little tug. It's very handy, as  she waits motionless while we gather our things and get ready to depart (but only when dressed in her coat). 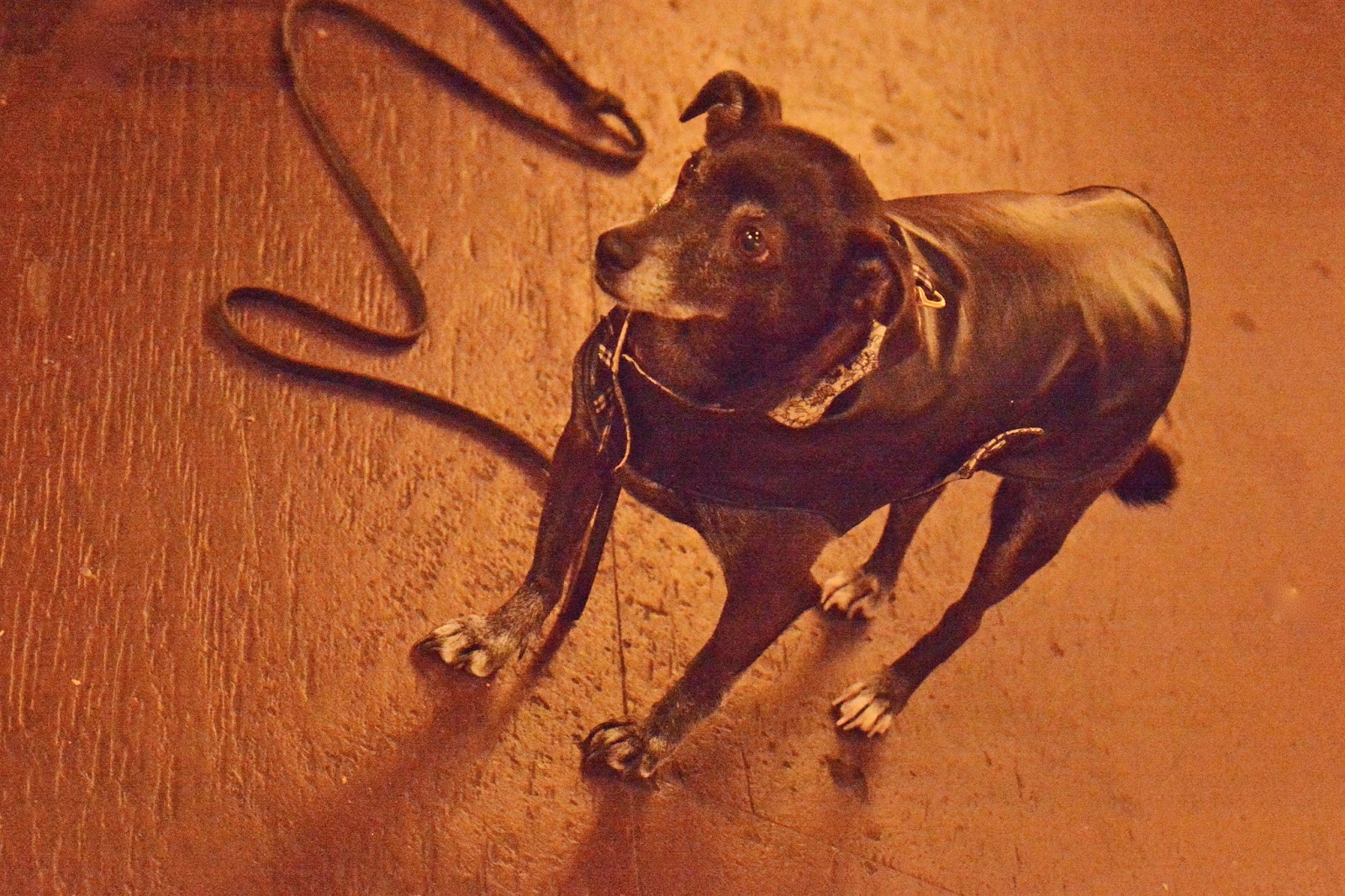 Walking home in steady rain (though thankfully, no thunder), we stood under a storefront roof to take this photo.  Black Jack is not a big fan of rain, but she stands.. 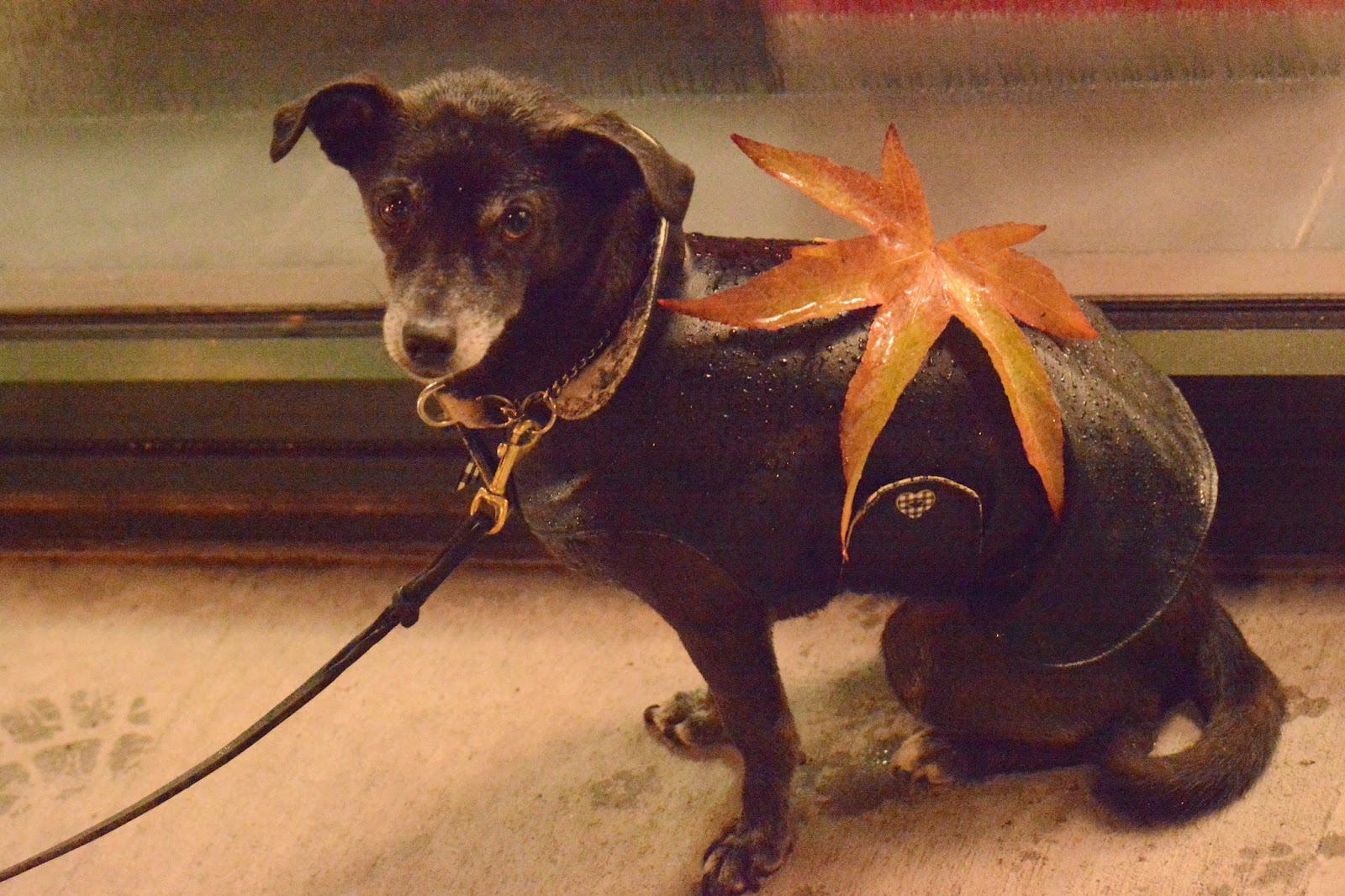 tall as long as we tempt her with.. 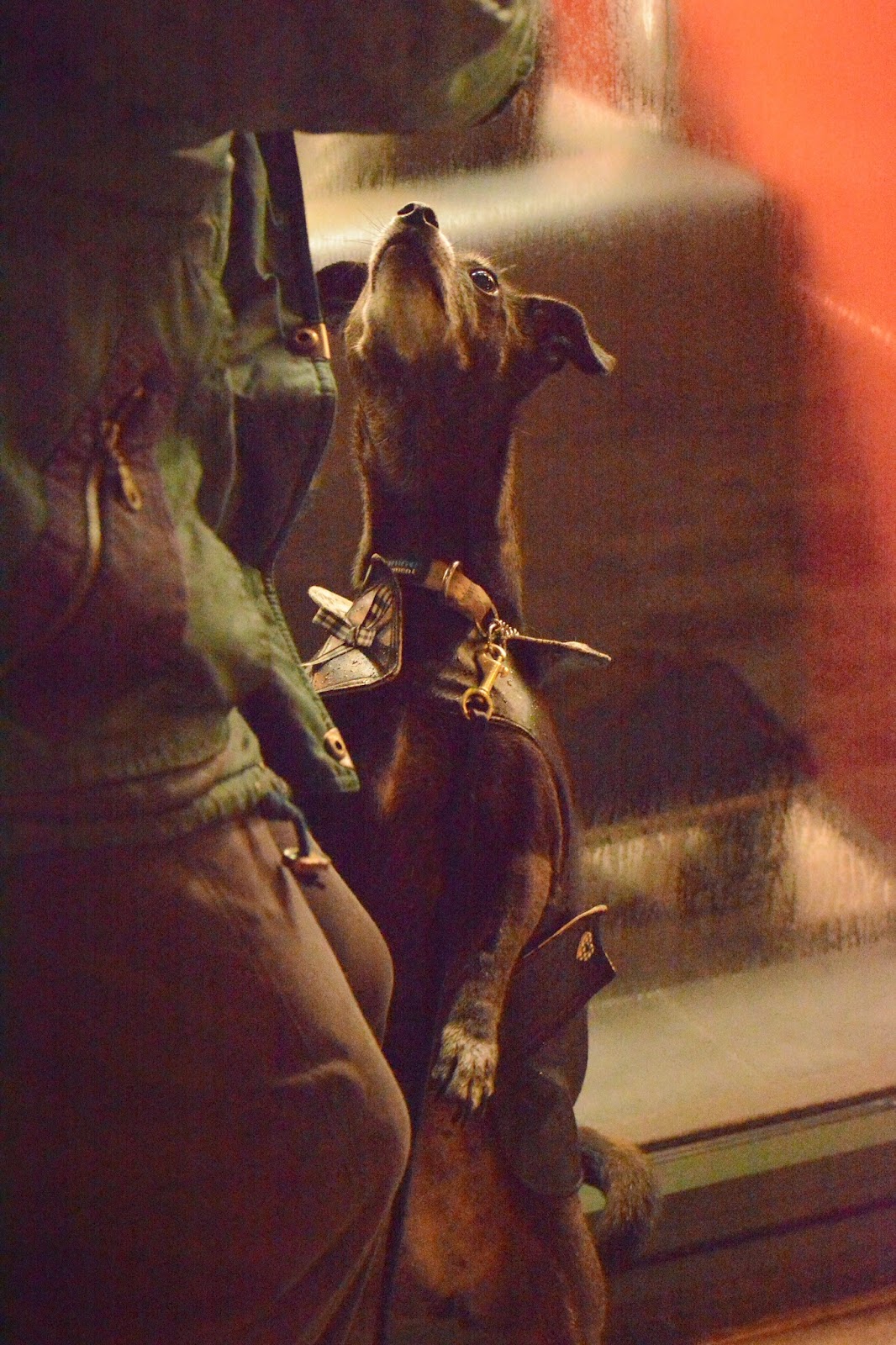 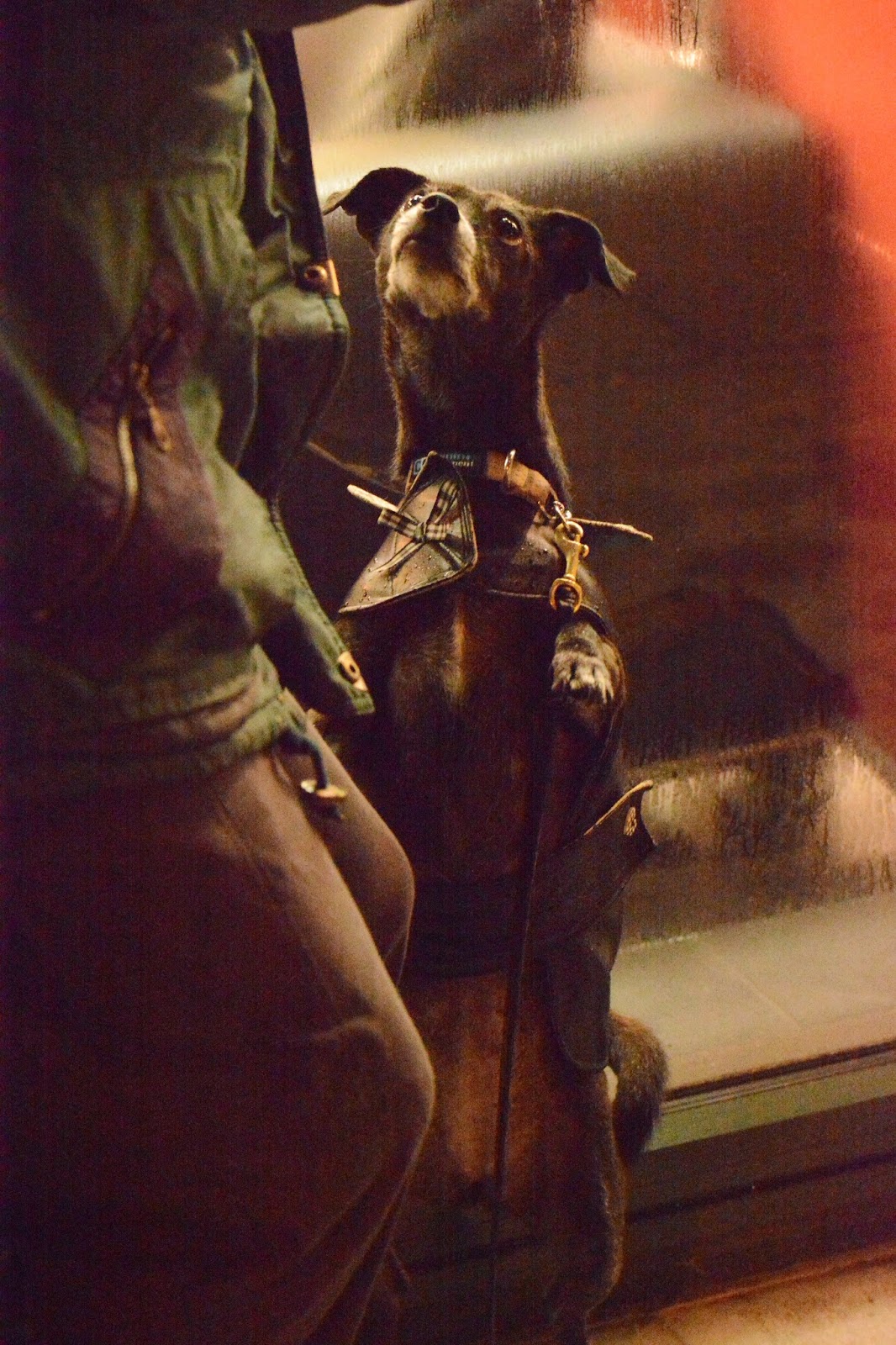 I looked kitty-corner to where we were standing to notice Choices Market (one of our two favourite places for grocery shopping because of their great selection of organic foods) and thought it looked warm and cozy with the lights on the tree. 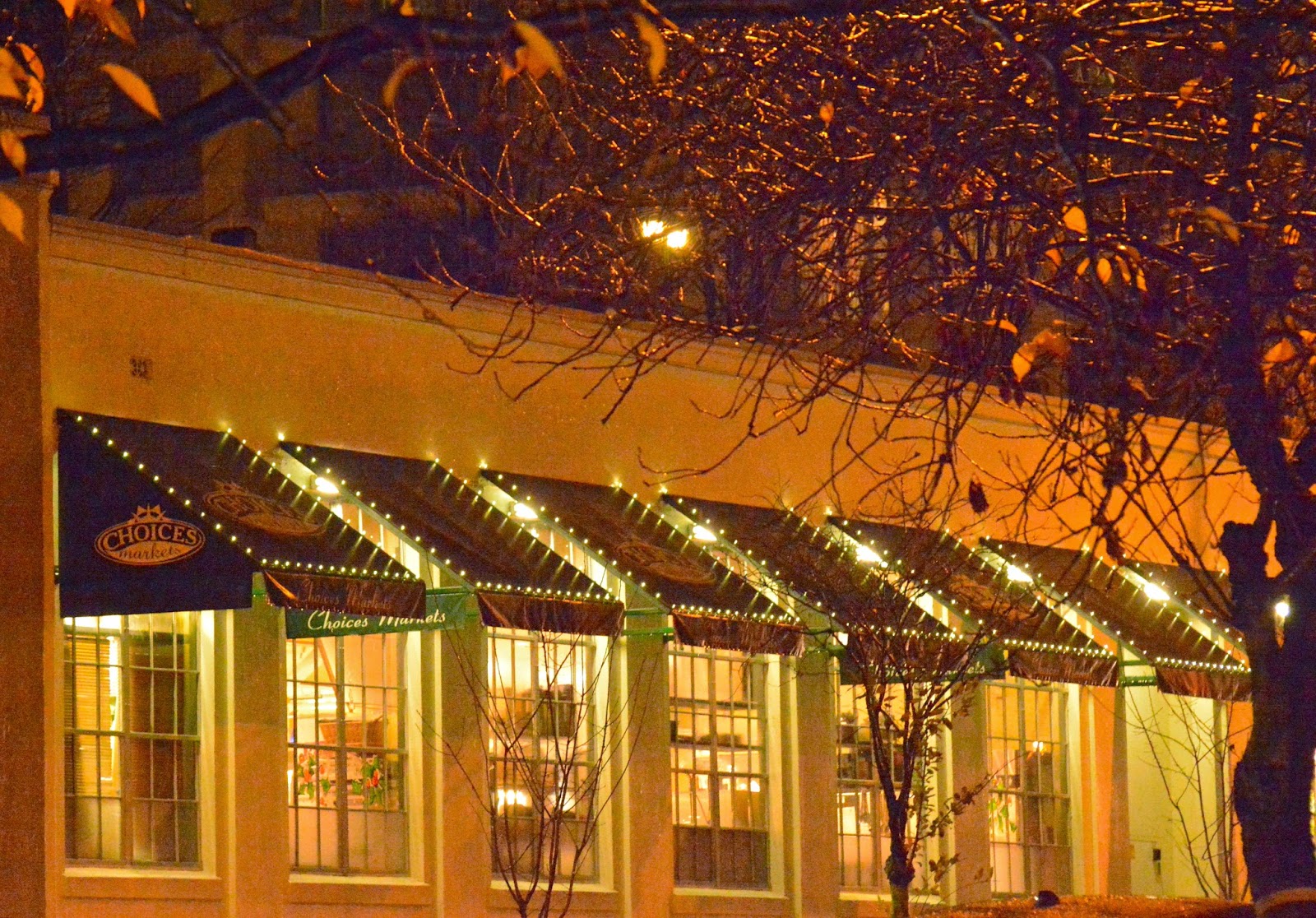 They do a thriving business; tons of umbrellas crossed the path of my lens in the few moments that I watched customers making their way through the door. 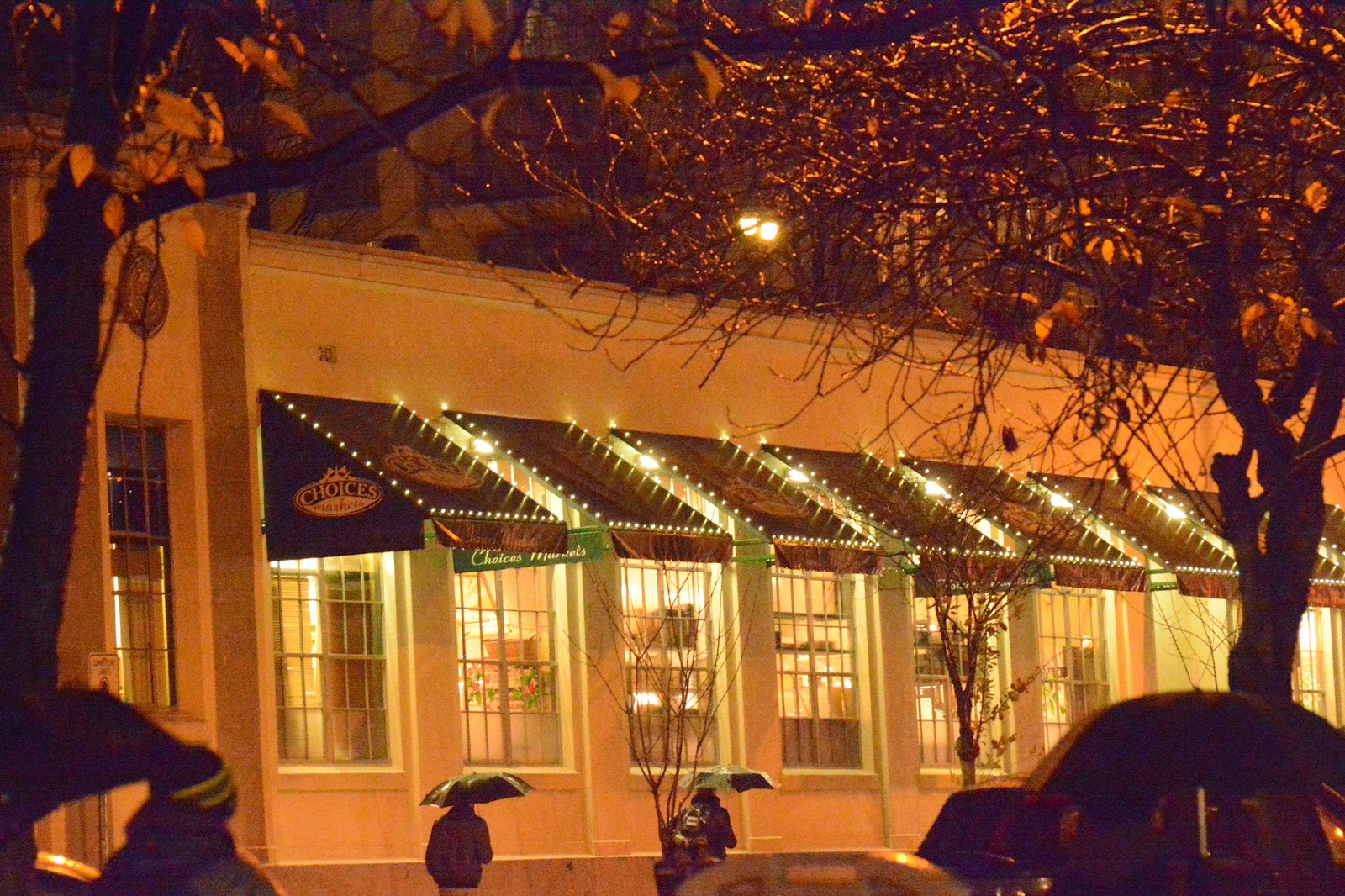 That pretty much exhausts my creative potential with regards to the letter T this morning, unless you want to learn my new word of the week which is telestich.  That is a poem in which the final letter in the last word of successive lines forms a word or phrase.  I tried to write you one this morning, but finally gave up.  Perhaps one of you will have better success with that poem technique.  As for my final photo, you may think this leaf has absolutely nothing to do with a T, and you would be correct, but.. 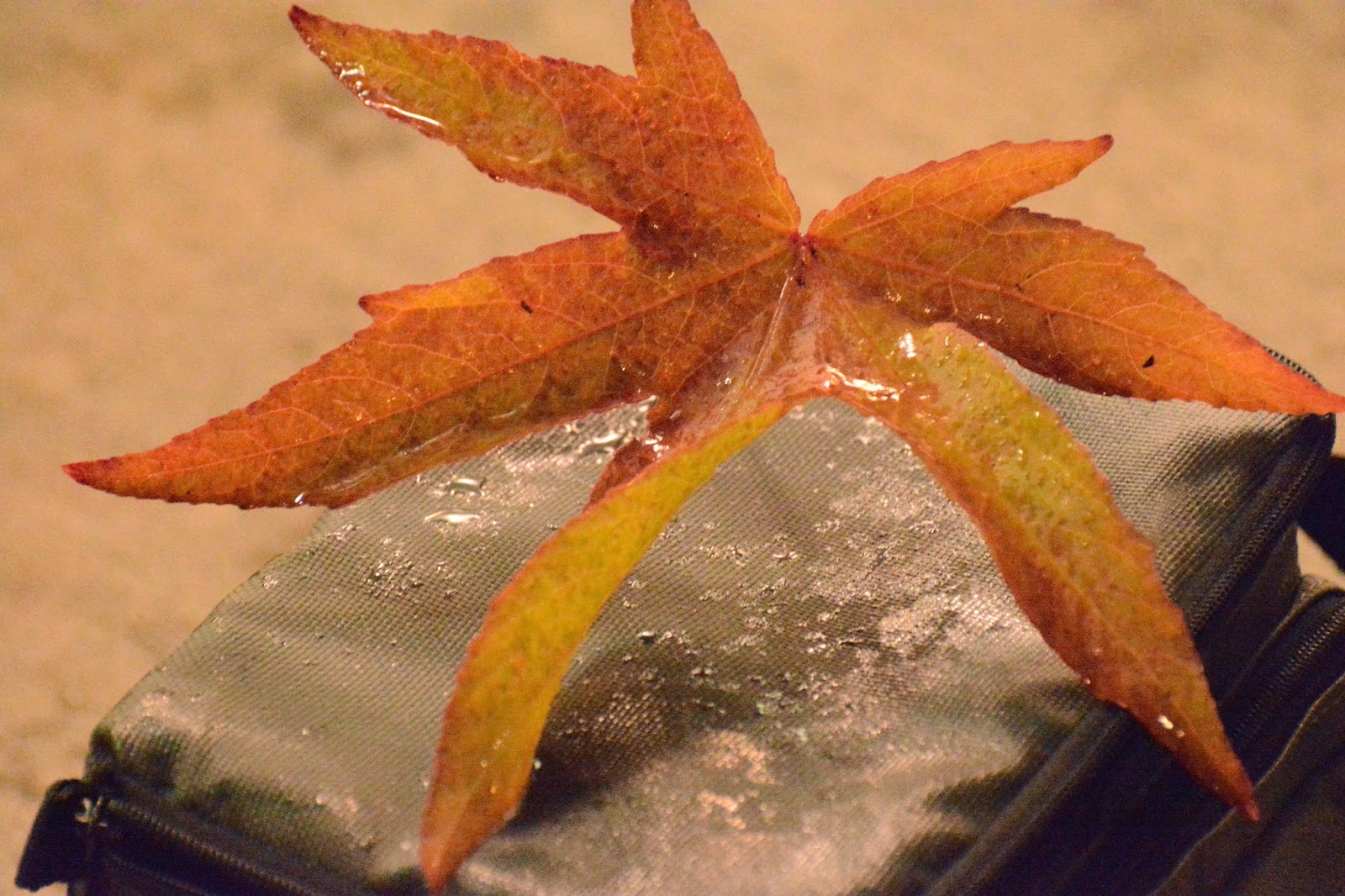 I've played a little trick on you.  The leaf is resting on my substitute camera bag, because the one I normally use is torn.  The T?  I'm happy to report that I've just noticed the brand name on that bag is Tam Tek.  I bought it for next to nothing at a thrift shop and hadn't noticed the name on it, but that's not a bad T for a rainy day, don't you think? :)  The most important T of all, though, is the one saying Thank you to you for visiting and to Mrs. Nesbitt for starting ABC Wednesday and to the wonderfully tenacious volunteers who visit our blogs and leave comments each week.  Happy Wednesday, everyone! 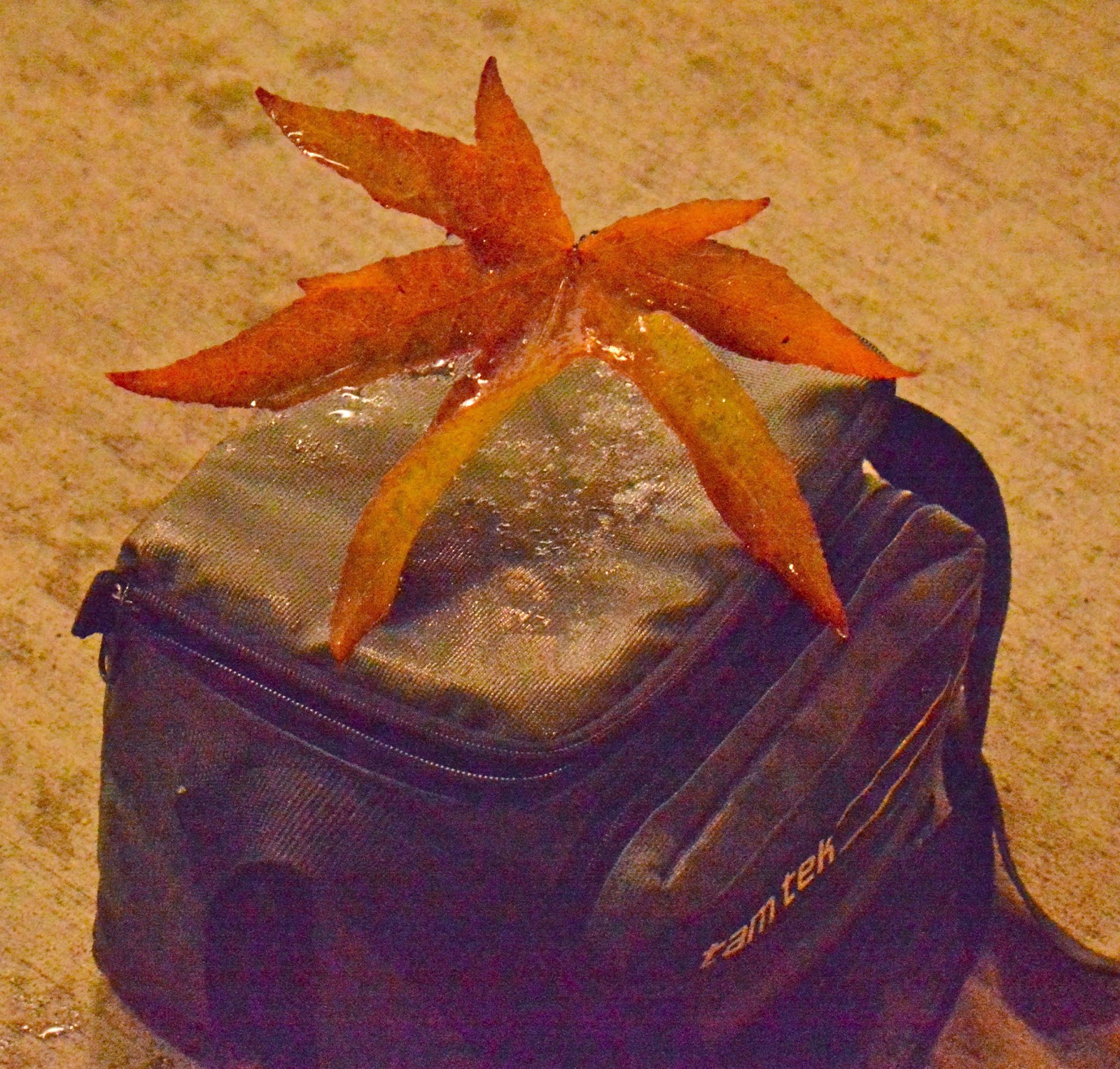