Critters in my past, and Life as it played out yesterday.

Some dental woes and some rain kept me from taking many photos yesterday.  The good news is that the kind dentist who agreed to see me for an emergency visit just as her Thanksgiving holiday was about to begin loves dogs and has a French Bull Dog of her own.  The second good news is that Bill sat in the waiting room with Black Jack on his knee, supporting me in my small meltdown status that happens whenever dental emergencies arise.  The third good news is that the tooth is back in place and appears to be holding strong.  Yay for kind, animal-loving dentists!

Since I didn't have any new critter photos to share with Eileen's Saturday's Critters this morning, I looked back in my photo-files to the 28th of April, 2010, when I took these shots of an osprey named Lawrence. 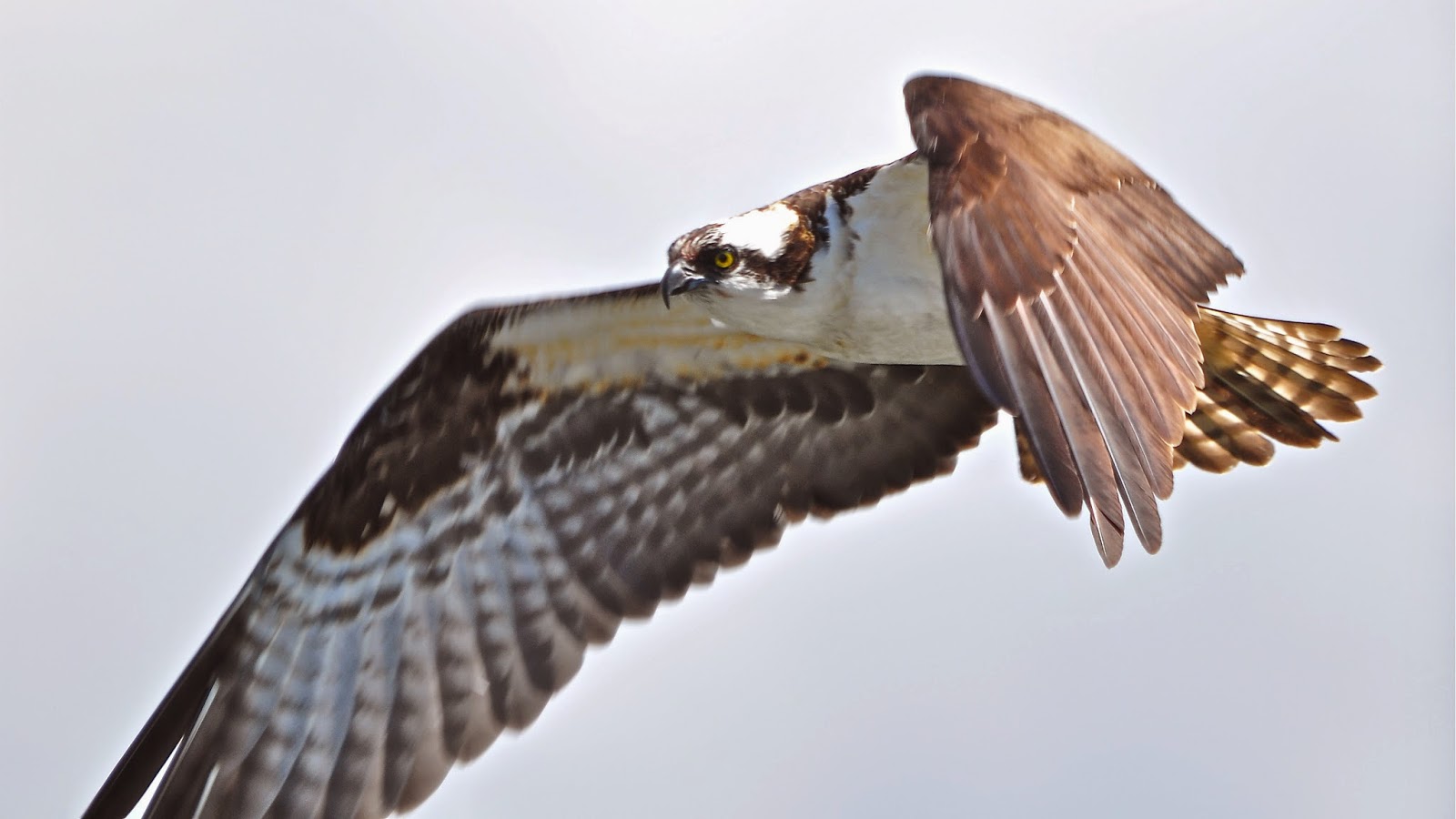 The summer before that, he and his mate set up a nest on a pylon very close to the school where I taught on the North Shore.  At low tide, it offered views such as I had never imagined possible.  We named the pair Lawrence and Olivia.  They raised a chick that we named Rose.  I watched that family all summer long and was privileged to see Rose's first flight.  Some of you will remember my posts.  For some reason, Lawrence's mating efforts did not work out.. 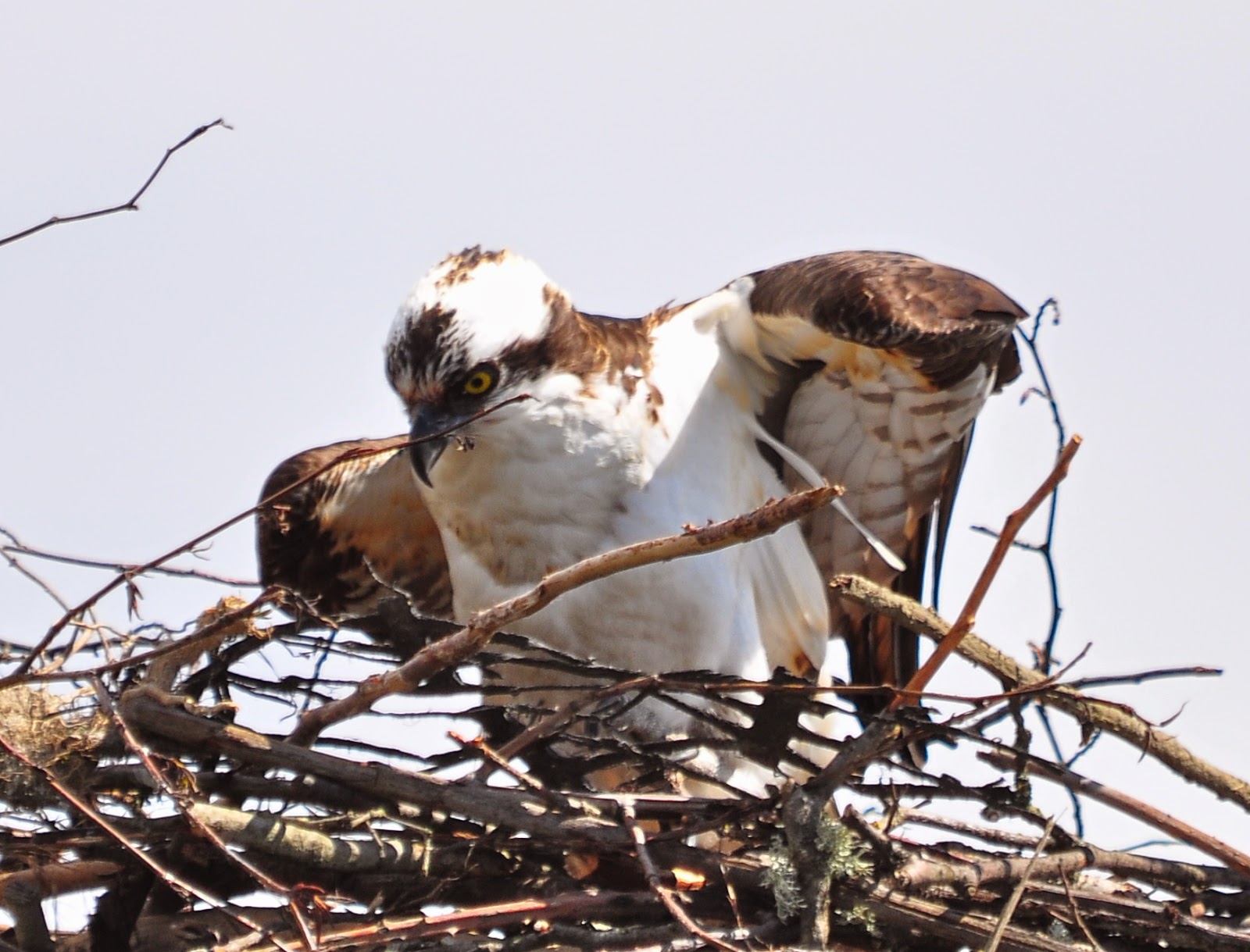 in 2010.  Many of us believe Olivia did not return and that he was trying to work things out with a new mate.  He tried that summer and even the following one, but after that, the nest was abandoned.  I understood my privilege at the time, but it becomes all the  more precious to me as I realize I've never again had such an opportunity.  Here are two more shots of him, also taken the same day. 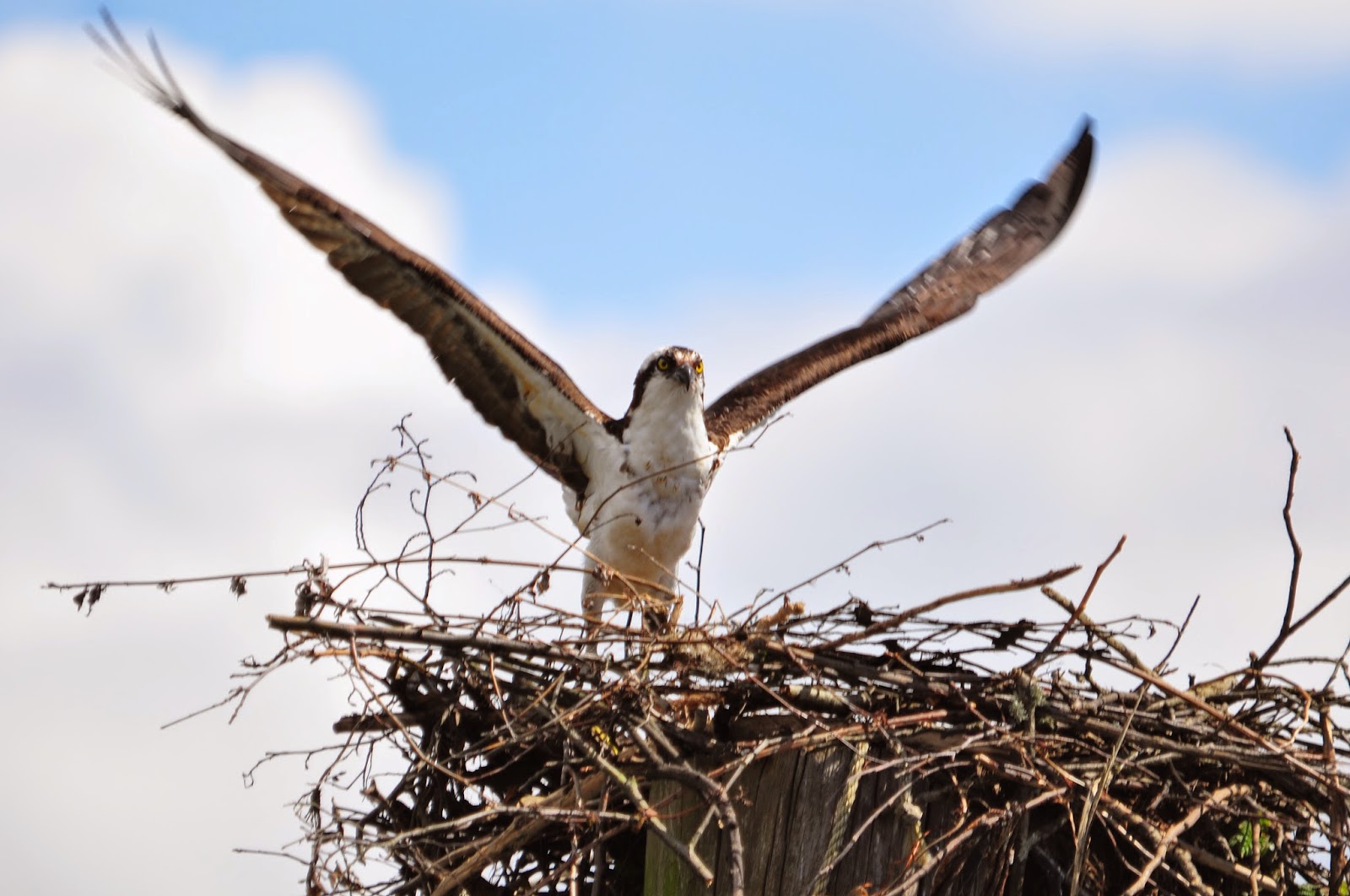 He sure was a beauty!

I have a couple of other critter photos to conclude the post, but hope it will be okay to post about the movie Bill and I saw yesterday morning at 10:00 a.m.  Yes, you heard me right :)  It was the last day of Vancouver's International Film Festival, and Bill, bless his heart, agreed to see a documentary called Miss Hill: Making Dance Matter.  That link takes you to a trailer video.  I'm not sure why I love dance so much, given that my own talents in that area are pretty much non-existent.  Here is Bill, waiting in line to enter the theatre.  My camera slipped into a "special effects" mode that I didn't even know I had.  It reversed the direction and gave him a comic-book appearance that I quite like, but.. 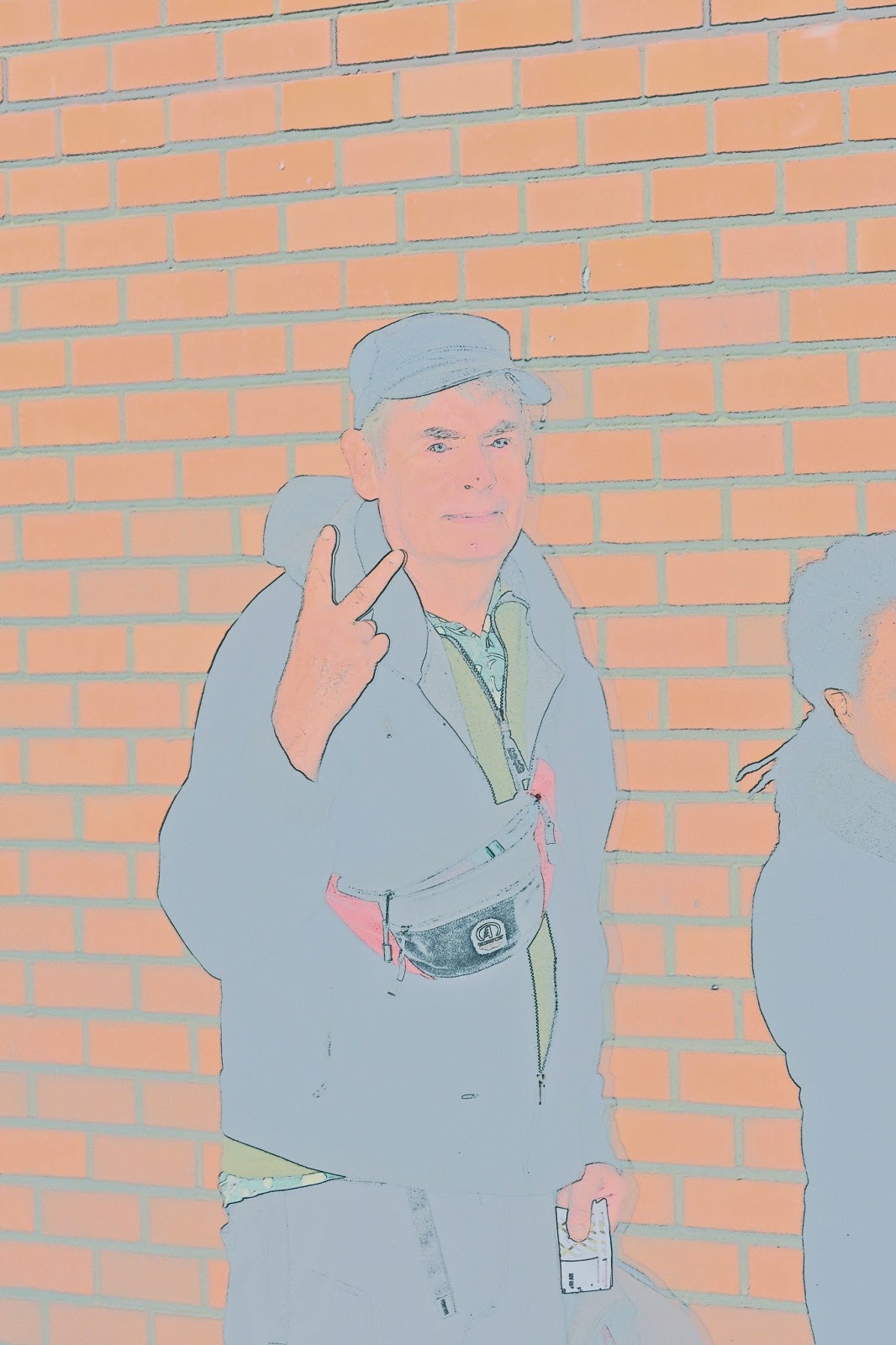 here is a more accurate depiction of how he looked at the time.  Handsome, no matter the effects, I'd say :) 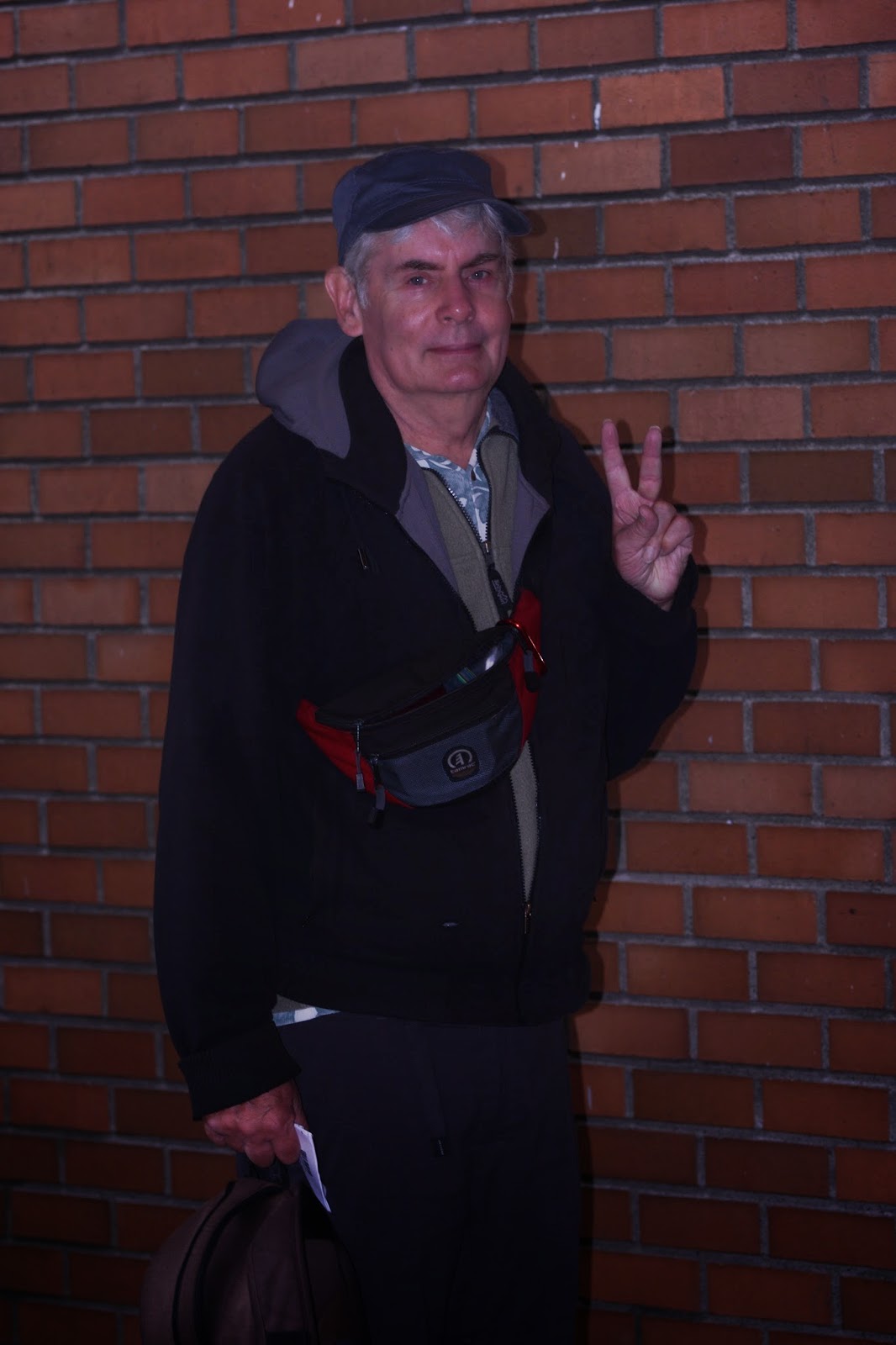 I took two screen shots.  I think but am not absolutely certain that Miss Hill is in the front here.  She was raised in a family that considered dance to be sinful. Yet, there is footage of her as a very young child, and one knows that her need to express her energy and passions through movement could not be denied. 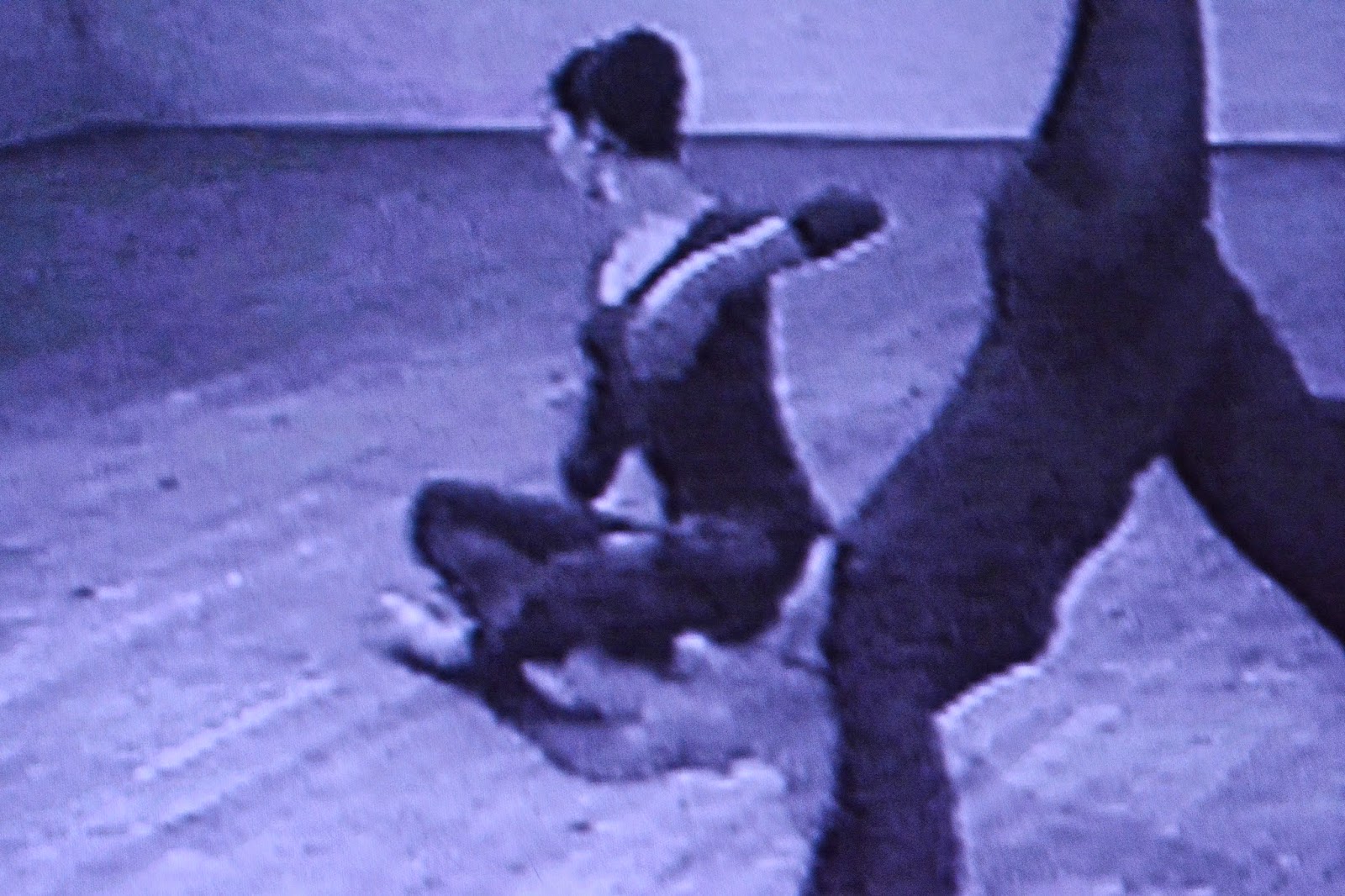 In the end, her legacy resulted less from her own dancing than it did through her teaching.  (Two of her students below) 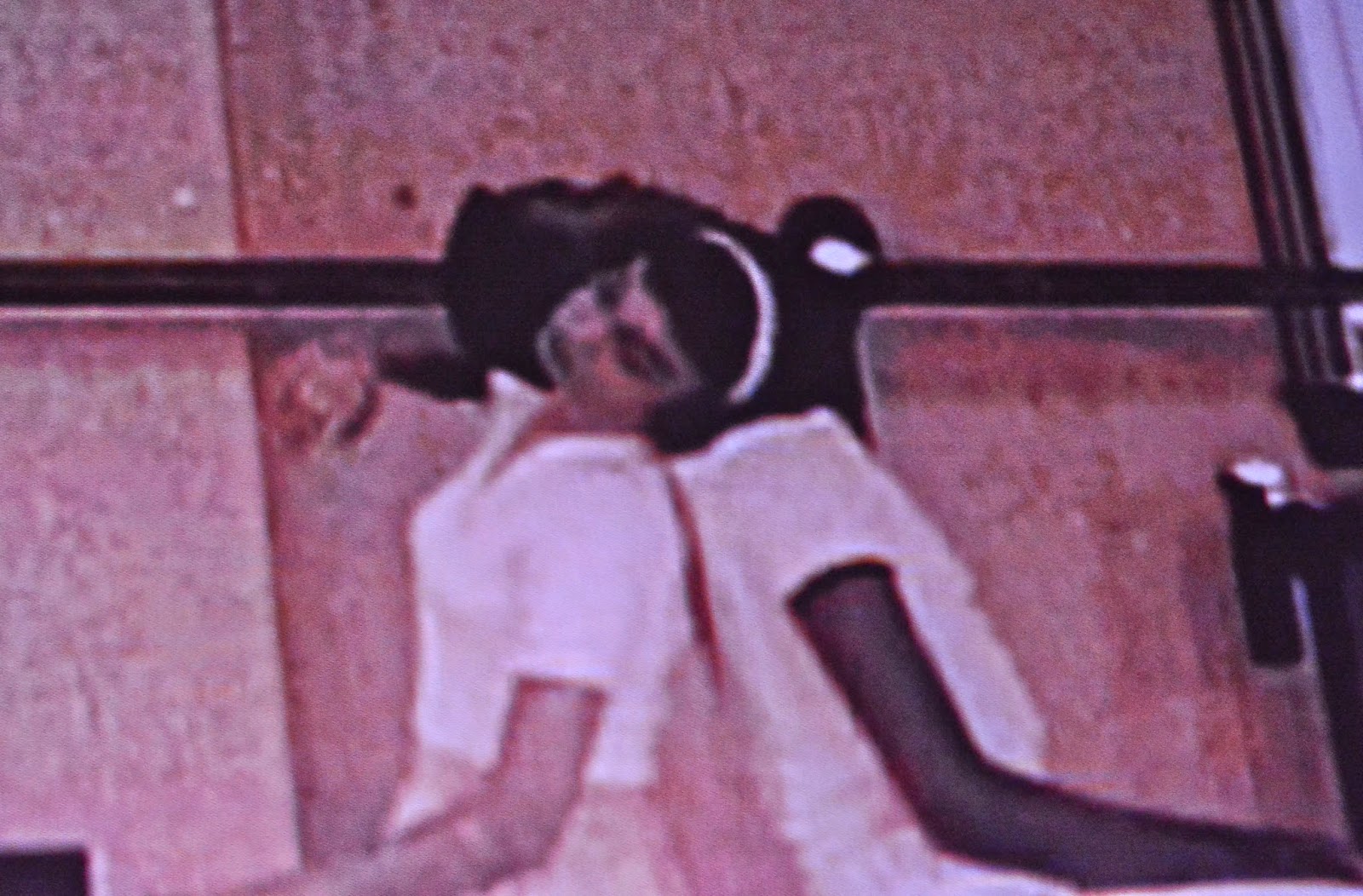 She brought the two worlds of modern dance and ballet together as no one had done before her.  She was the heart and soul of the dance department at Juilliard School of Music, and the story of her gutsy move into Lincoln Centre will stay with me forever.  Packing up her files in cardboard boxes, breezing past security, selecting two studios and a tiny office for herself, building her desk from those boxes, and reining over her department until she died at age 94 - this was quite a woman.  The photo below comes from the Martha Hill archives and was found at this site.  She is at the far left, leading her technique class at New York University Camp at Lake Sebago, Sloatsburg, N.Y., 1931. 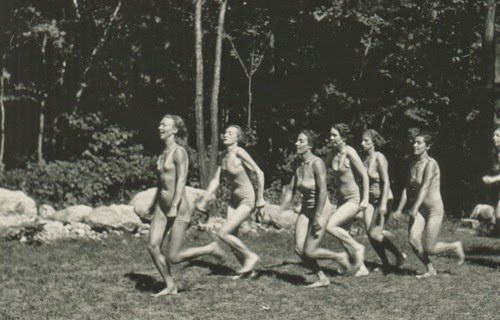 And, as promised back to a critter photo.  Black Jack is well and happy and says "hi" but I did not take a photo of her today.  This little cutie was taken in David Lam Park on November 10th, 2012. 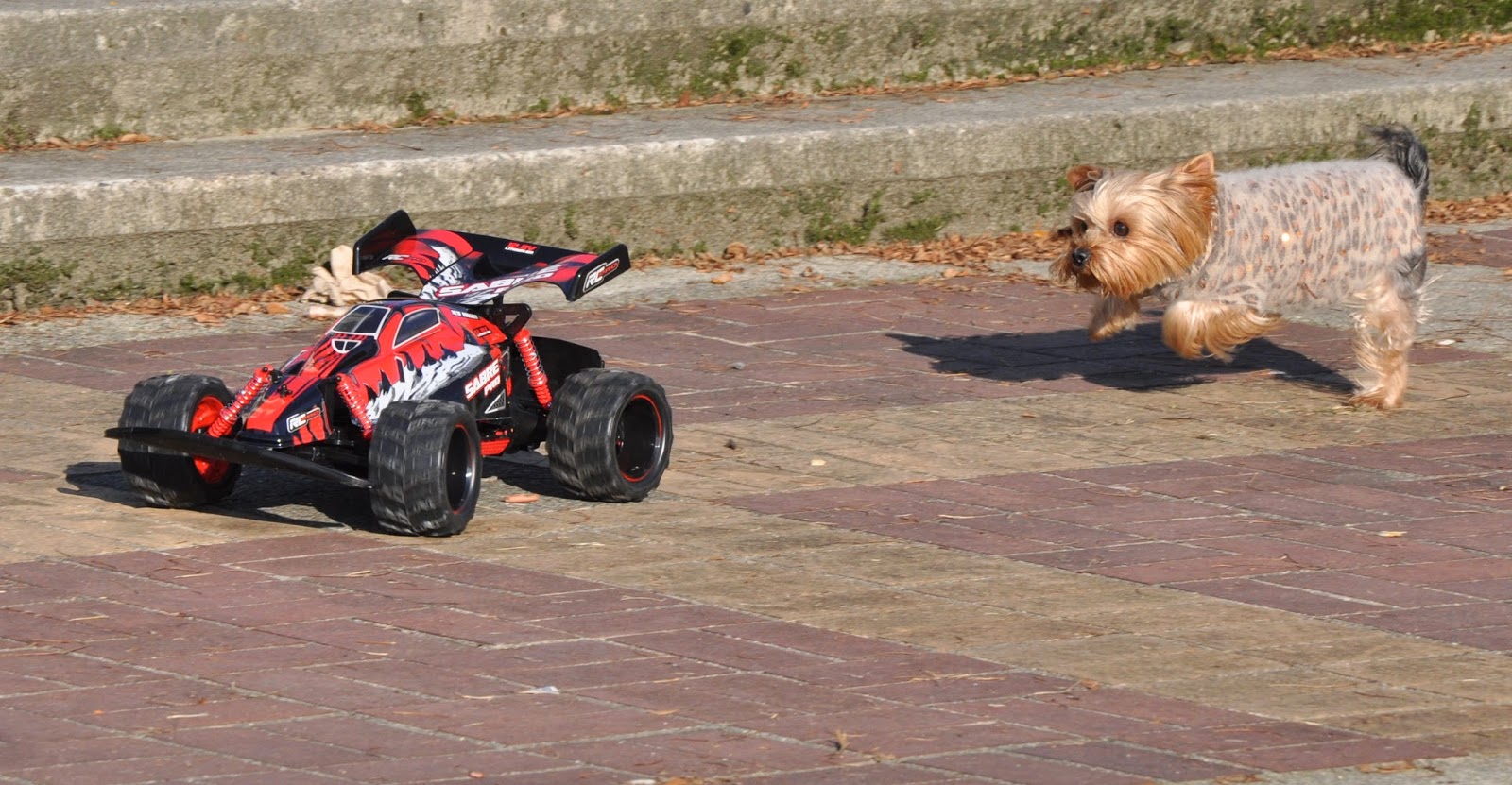 I posted him at the time, but thought some of you might enjoy the smile this morning. 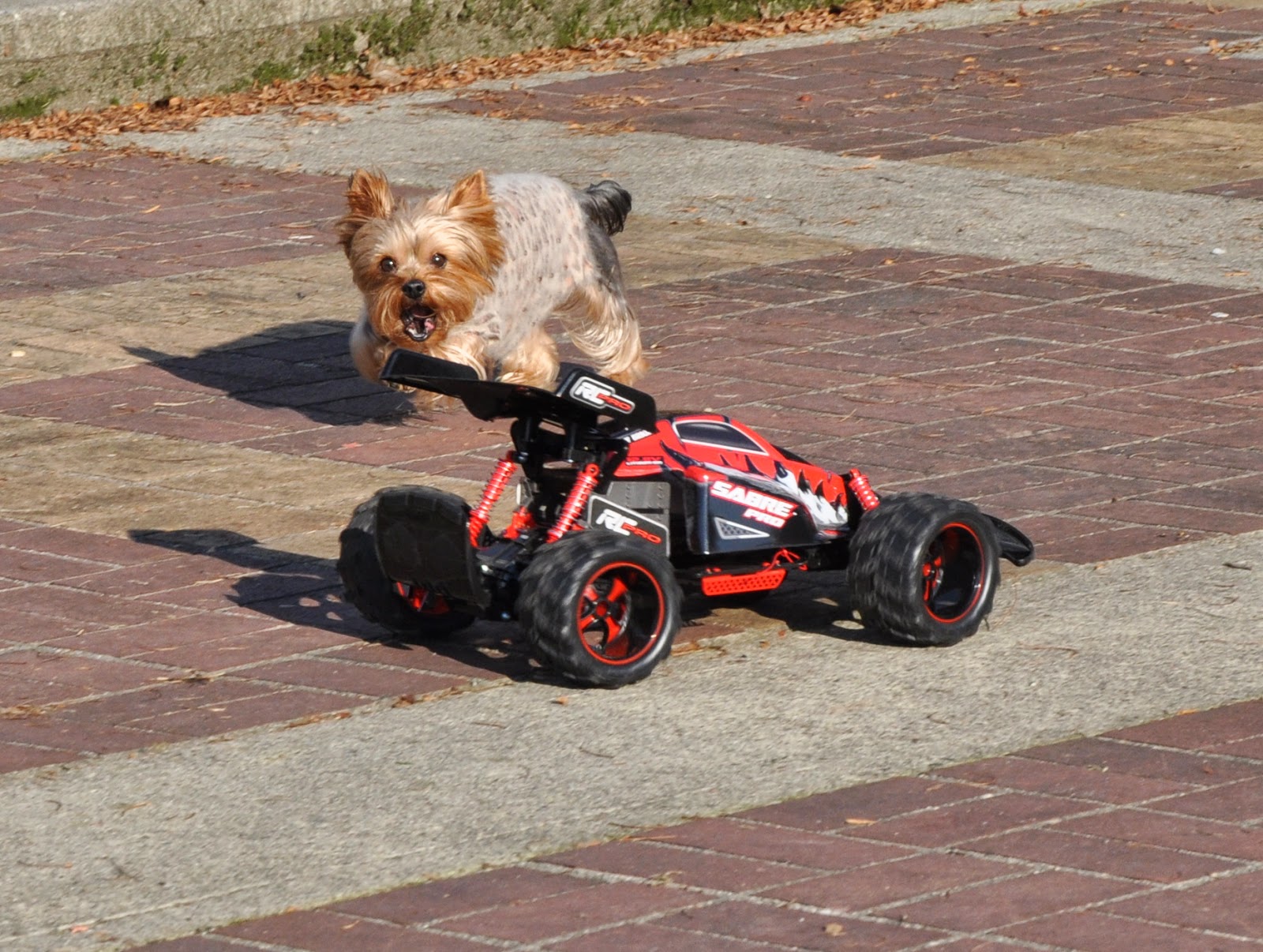 Thank you so much for stopping by.  Have a very happy Saturday.  For more critters, Eileen's meme is a great place to spend some time.  My thanks to her for encouraging us to share our critter loves. 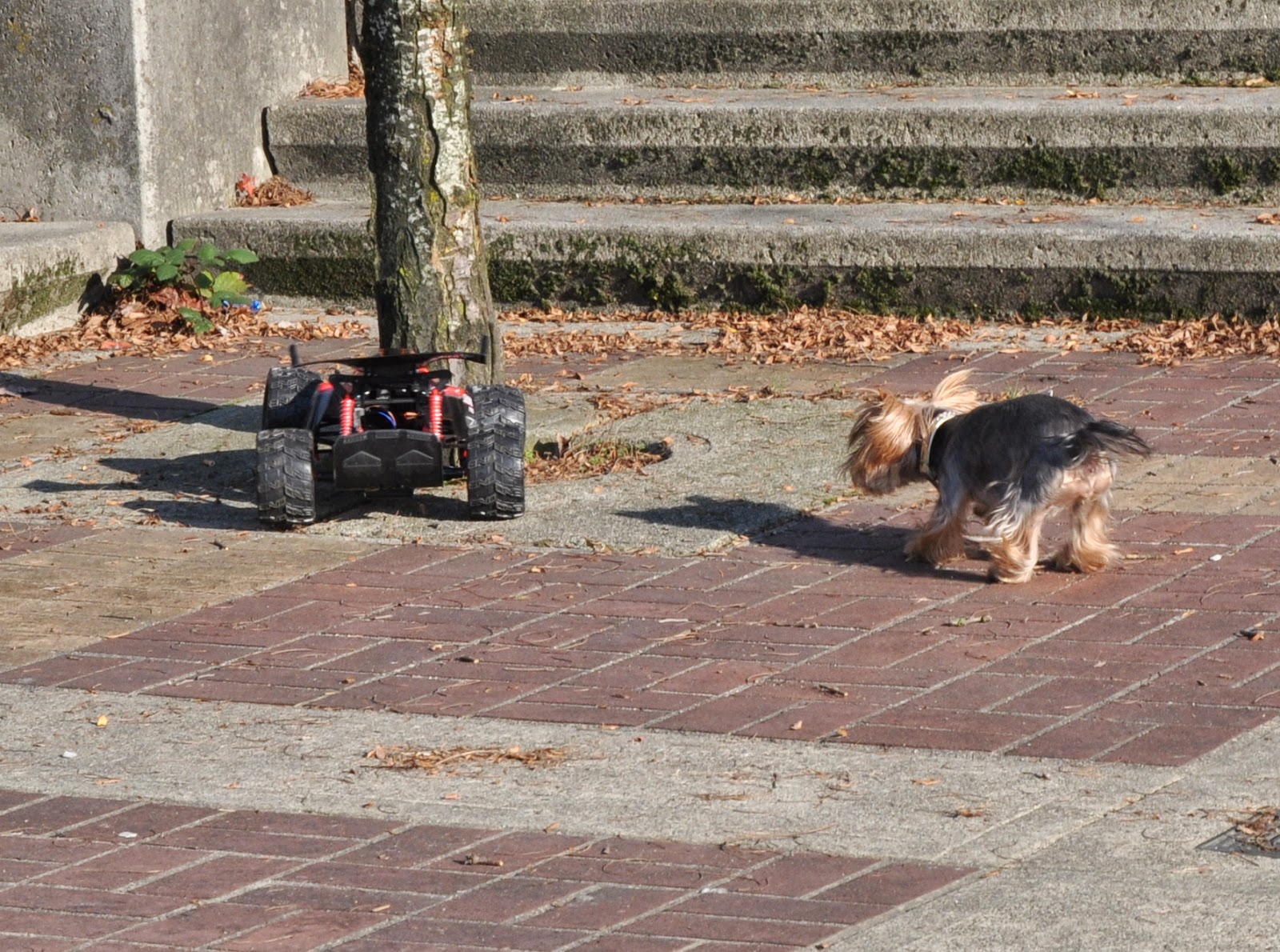