Healing Thoughts for Haley, amid Oranges and Handshakes on Friday

The top two photos would be my official submissions to Maria's blog meme, Orange You Glad It's Friday.  (Thanks, Maria!)
In David Lam Park 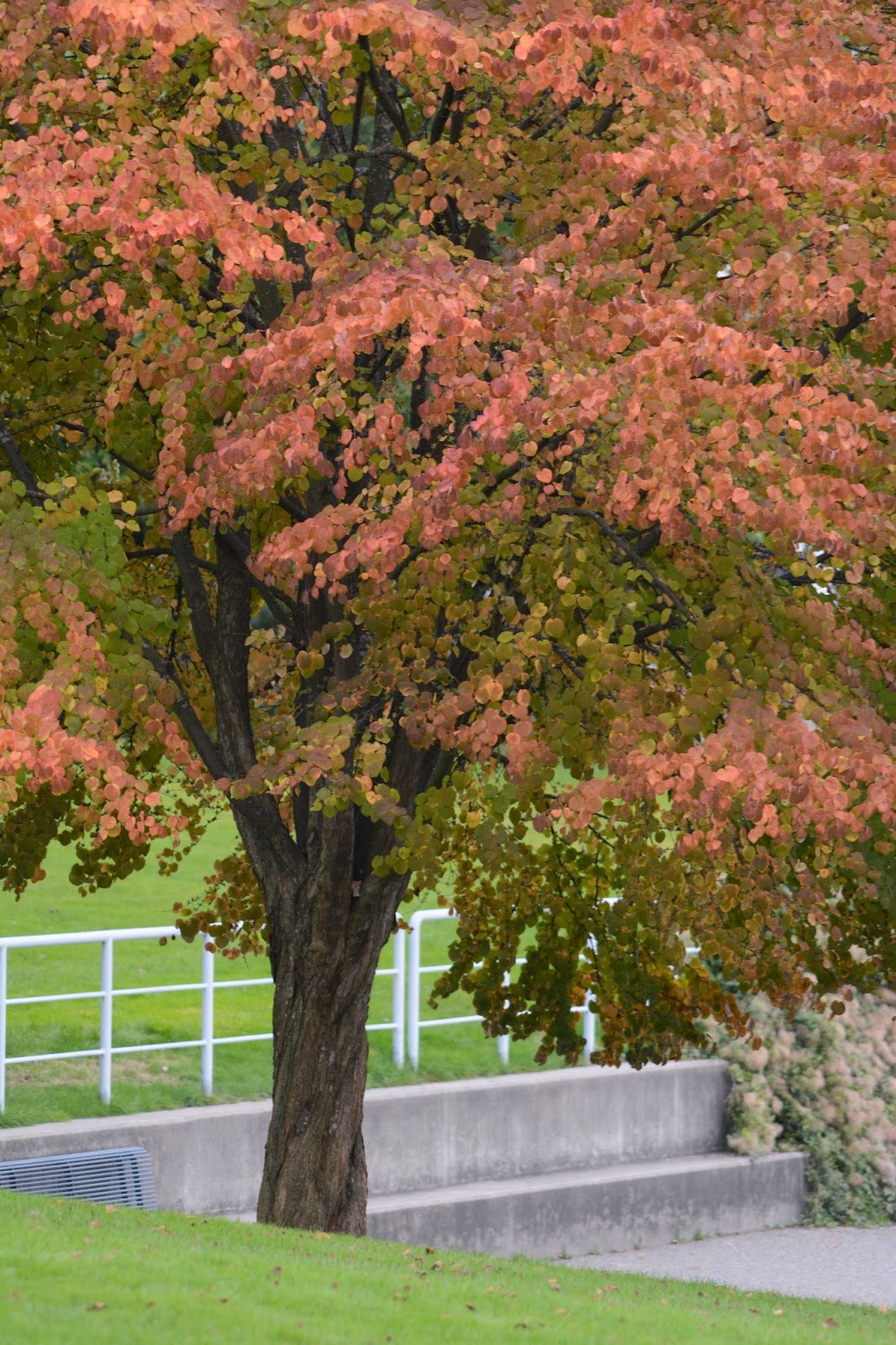 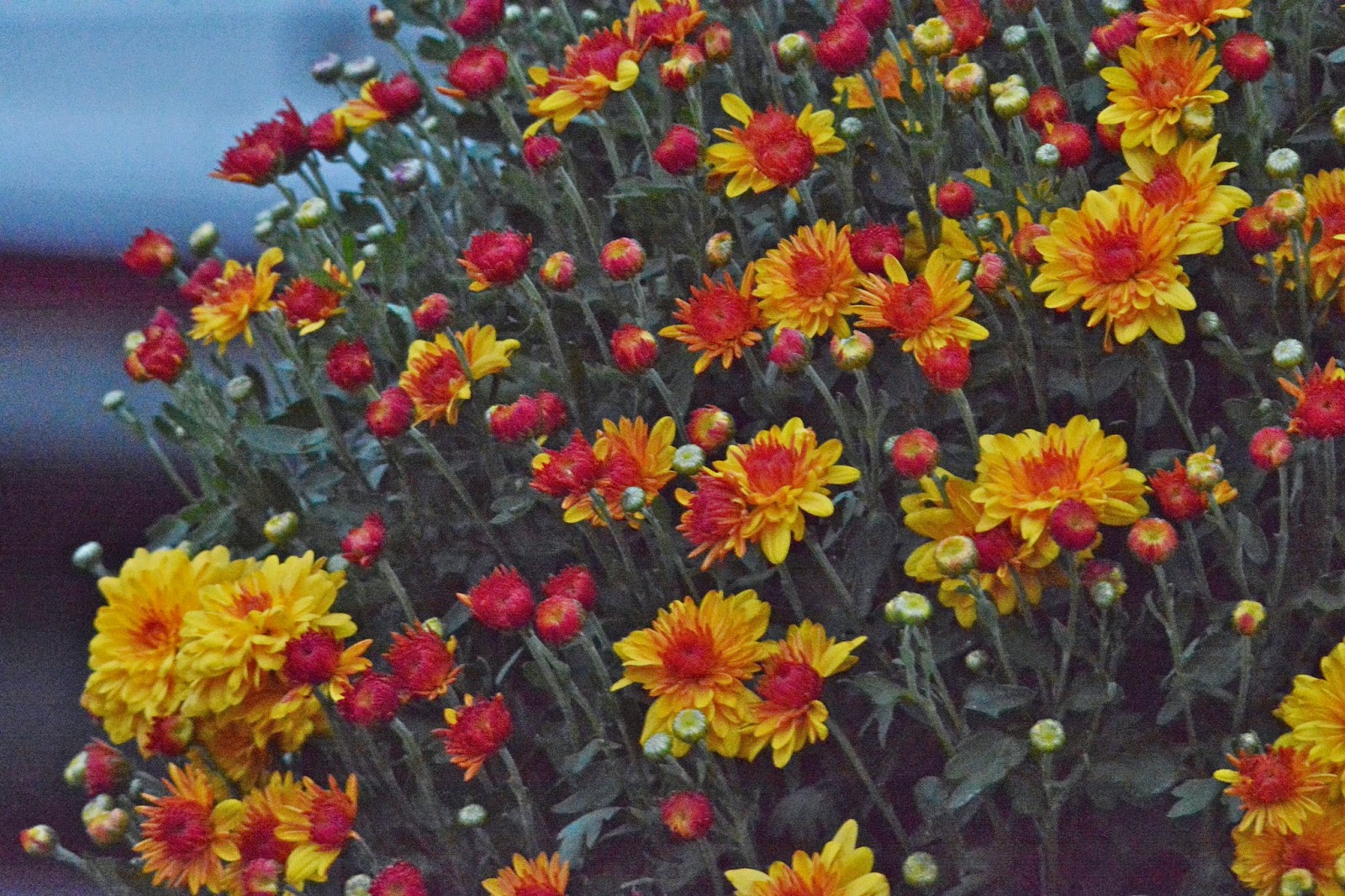 The other photos are in order, as taken yesterday during our outing along False Creek's bike creek, through Olympic Village to Granville Island and home by the aquabus.  You may notice some more subtle oranges along the way.  But before I get to those... a word about crosswords and handshakes.  I had planned to take a photo of our record-time completion of a crossword, but with less daylight hours and a still-being-repaired smaller lens, that photo didn't happen.  But, we have celebrated our successes lately with our own sort-of-secret handshake, and I thought you might like to know about Bill's efforts to initiate me into the world of the super-cool.  You may have already figured this out by now, but I completely lack the super-cool gene :)  My handshake is the standard one learned as a kid..  fairly firm and just one move.  Clasp the other person's right hand with my right hand, and then a slight motion upwards followed by a distinct one downwards.   If the other person leads, sometimes, I might do a 2nd downward motion, but that's about it.  I have watched others with some fascination as they do one or more of the motions shown in this video..

but just never learned to do it myself.  I seem to have to be taught these things.  It's the same with cool songs.  I remember my sister learning the words and dance steps to the coolest songs when we were kids.  I occasionally learned to hum along to a few of those songs, but rarely could mumble more than a couple of lines from the chorus.  As for the dance steps, well, no..  they weren't in my repertoire of talents.  Anyhow, to get back to the topic, we seem to be improving with those crosswords and Bill thought we should celebrate that.  He has been working for a couple of weeks now to teach me a little handshake routine, but as of yesterday, even with repetitions, he had to coach me verbally along the way.  What I do get out of this experience is the greatest chuckle.  I love him for his efforts!  When that infamous lens comes back, perhaps, we'll do a little video just for you :)  In the mean time, I'd love to know if you have a personal handshake that you love to do. And now, on with yesterday..

Remember that jelly-bean sculpture?  Yesterday, for the first time, I realized we can see it all the way across False Creek.  My 500 mm lens caught it in this photo after Bill pointed it out. 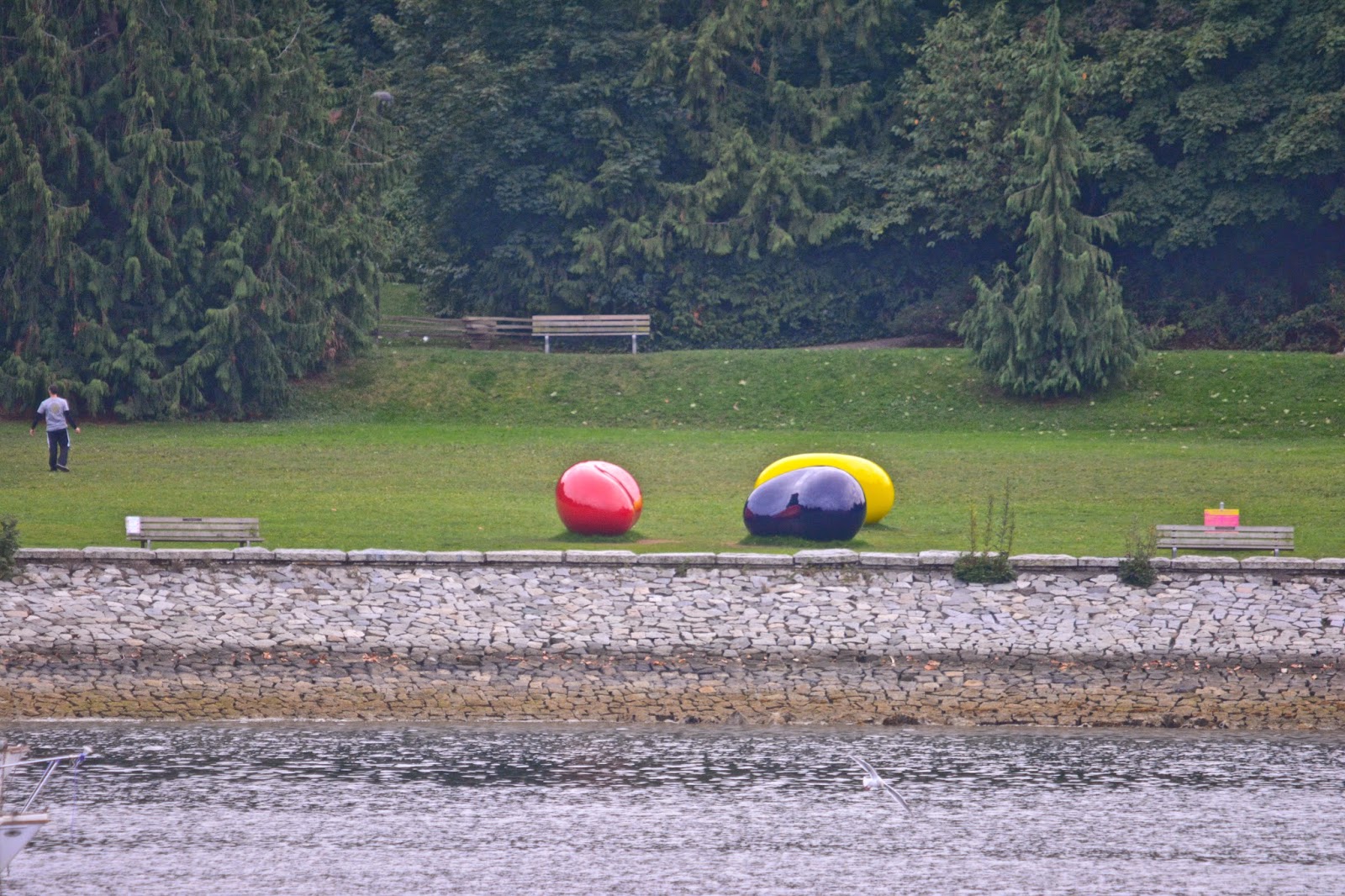 We stopped to give Black Jack a run as we rode by our home park on the way to Olympic Village.  She had been shivering on the bicycle, even with her coat on, and I knew she needed to get her blood pumping.  I didn't take pictures of her, but there was a bit of a breakthrough when she spotted something in the grass, and left it when I called to her rather than gobbling it down as quickly as possible.  I like to think that was because she remembered my tantrum and the immediate halt to playtime the day before when she did gobble down some unrecognizable food item.  However, it may have just been that whatever she found wasn't edible after all.  After our play, I took a few moments to admire the trees. As you can see, we are beginning to dress up a bit more warmly these days.  I'm determined to continue as much cycling as possible throughout the winter.  Barring snow or ice, I'm hoping we'll still be going out on most days for at least a short ride. 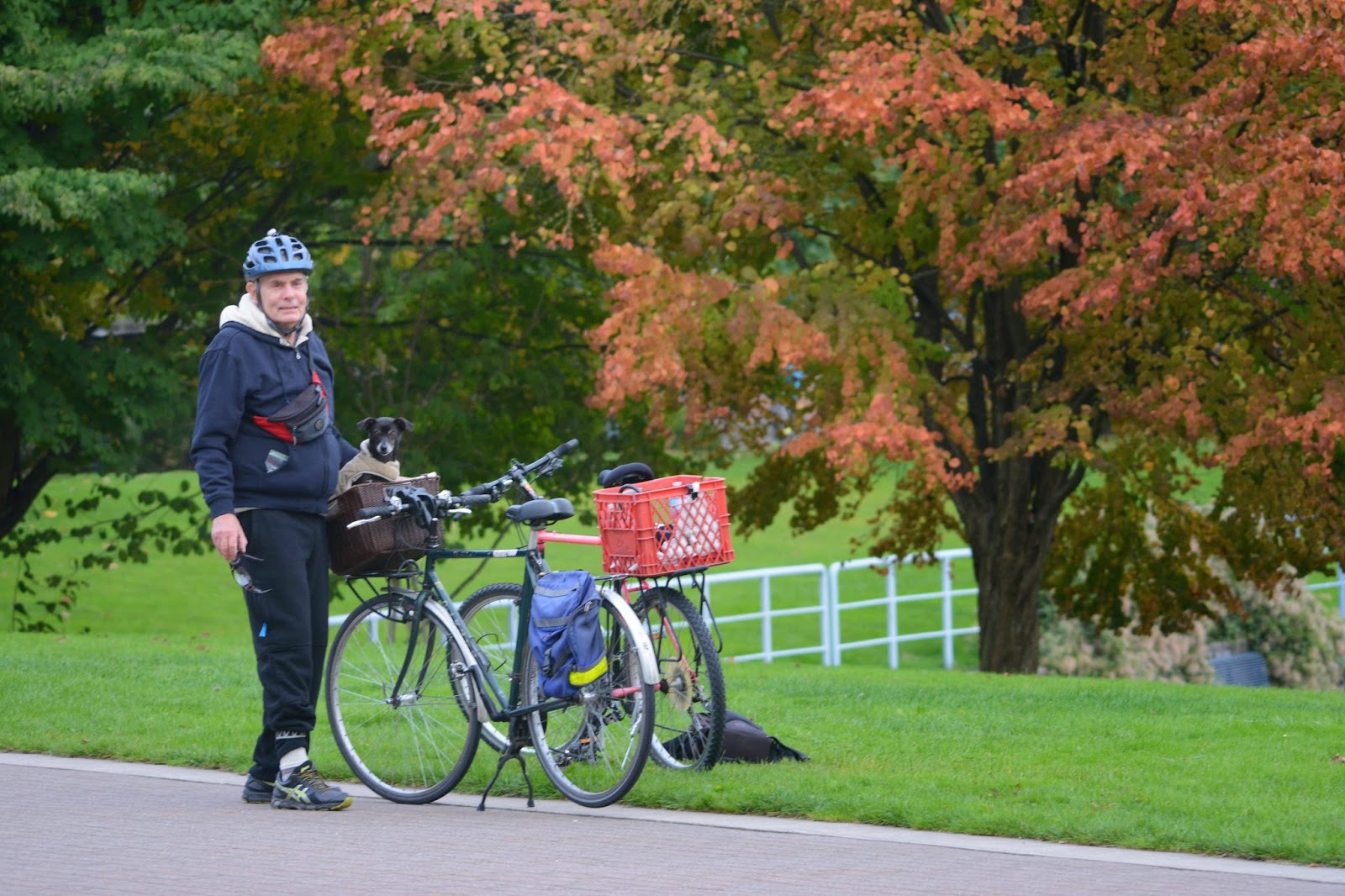 The pond along the way, usually well populated with bathing seagulls, lots of ducks and a couple of herons, was almost deserted yesterday.  Bill pointed out the "walrus" rock.. 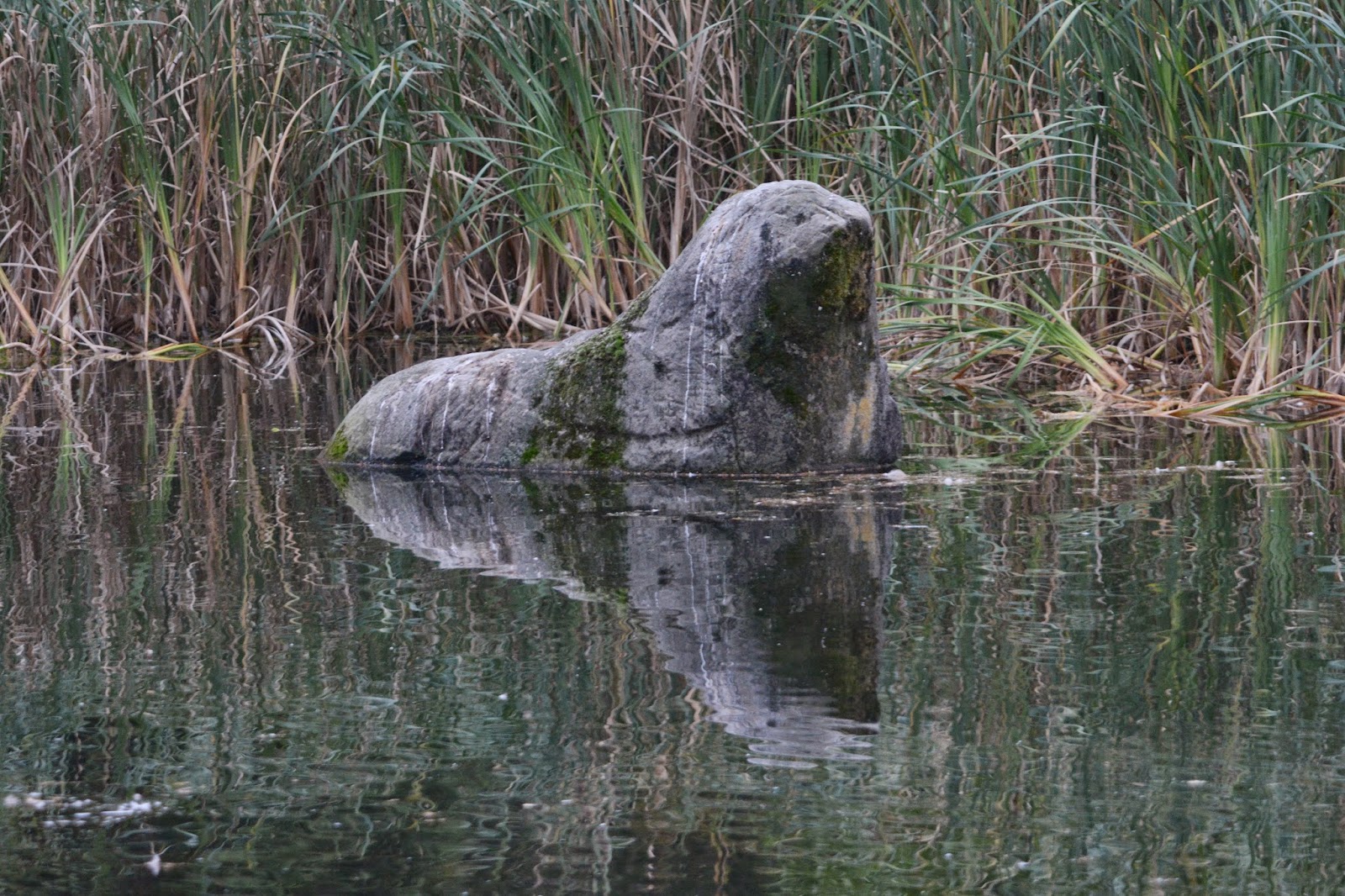 and a lone Canada Goose appeared to be fairly content, 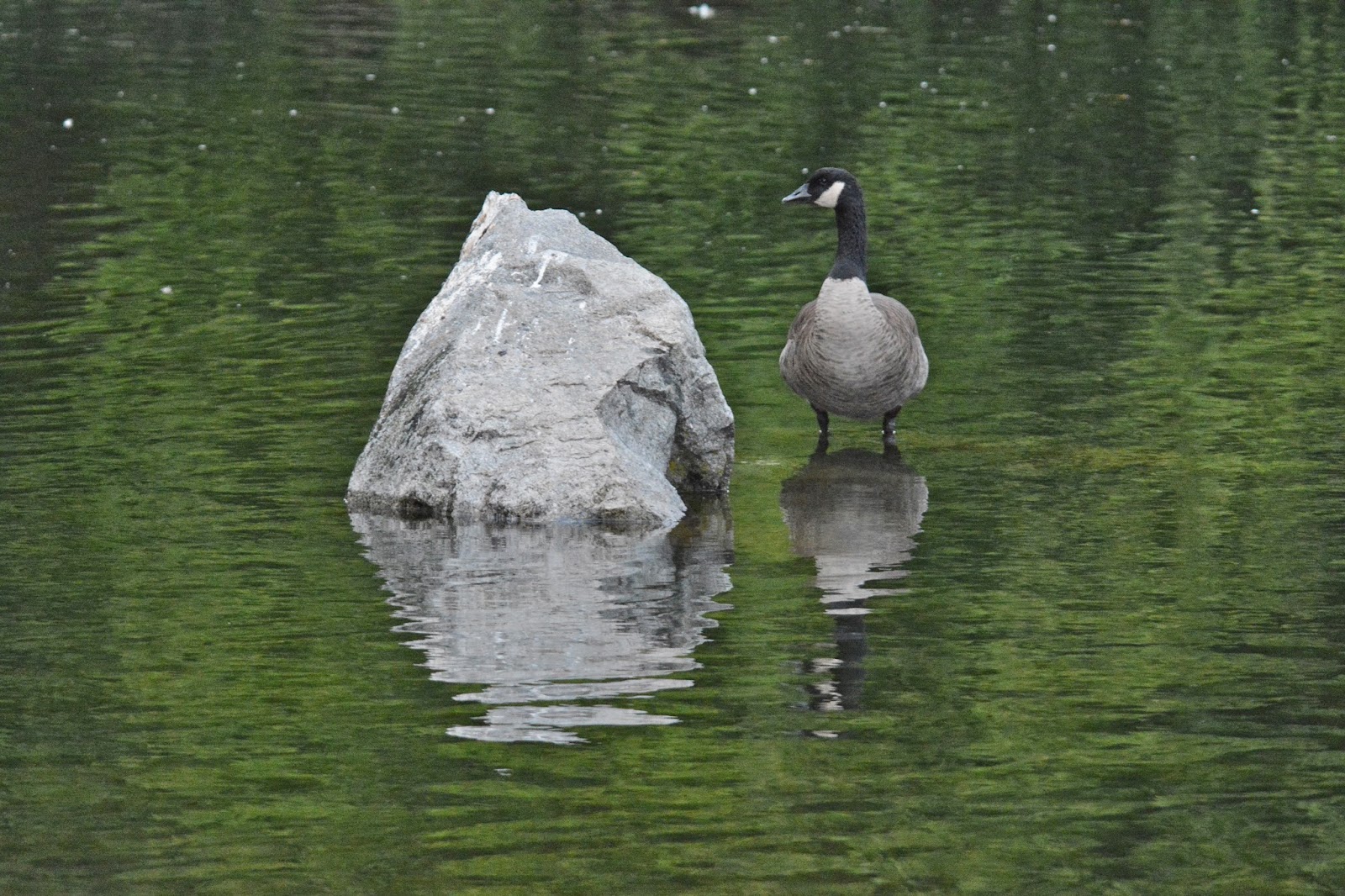 but even the mallards were spending more time out of the water than in,. (orange legs and leaves) 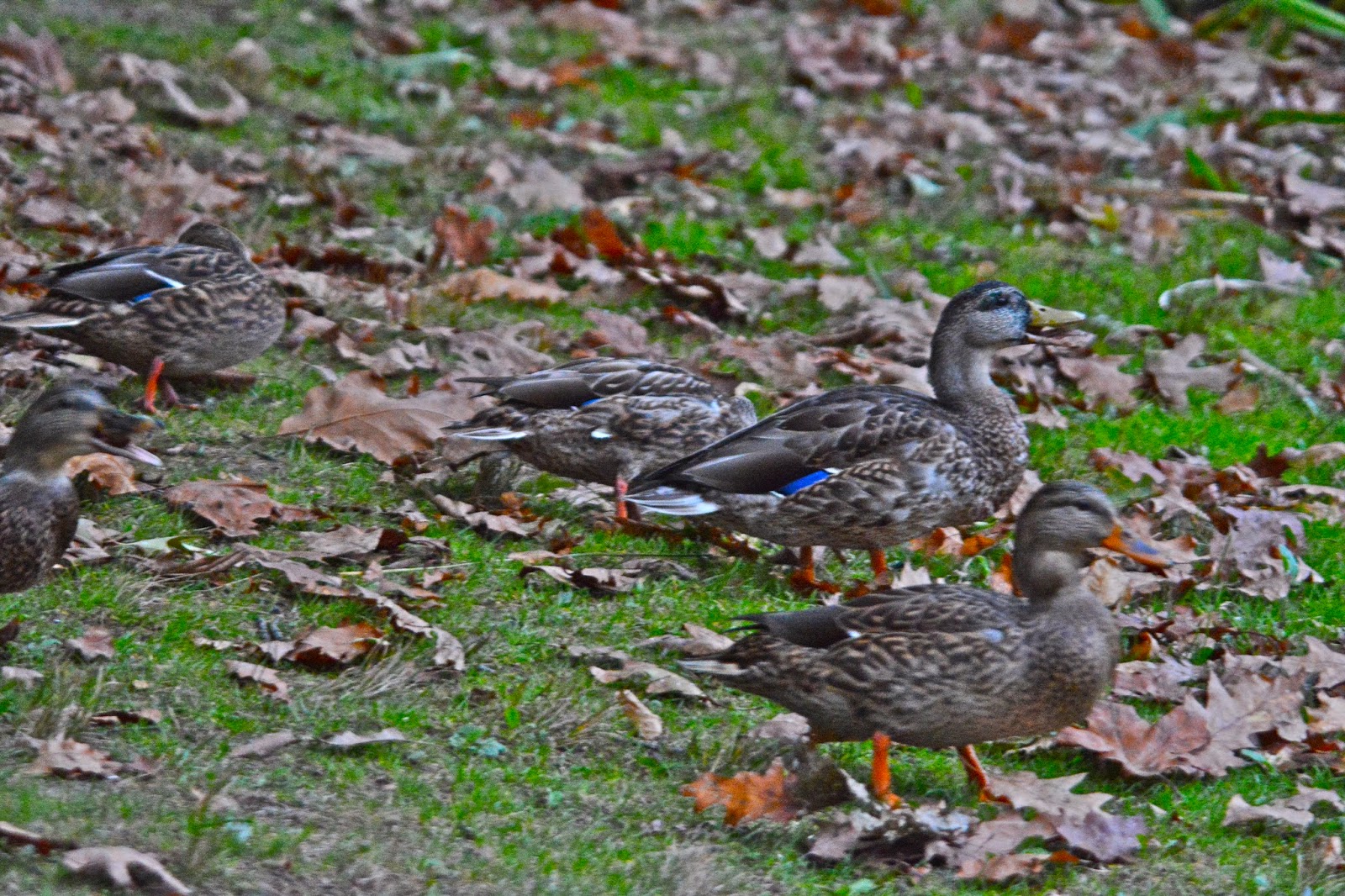 I'm not sure what this reflection portrays..  maybe a crocodile with gigantic bite in its mouth? 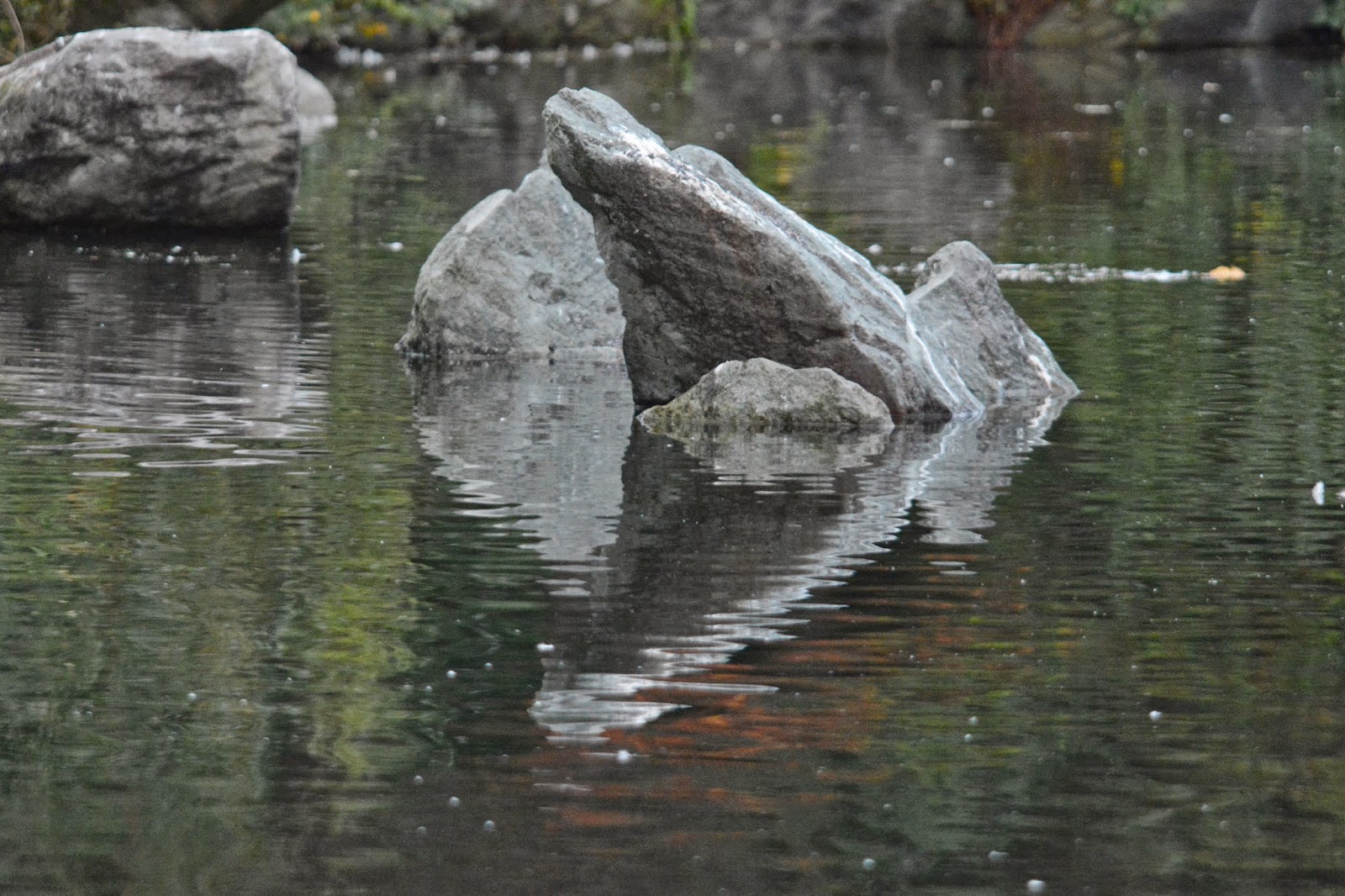 It seems the signs not to climb on those jelly-beans are a complete and total failure. With limited wildlife viewing, my eyes settled on two dogs (with orangey tones in their fur and an orange ball) 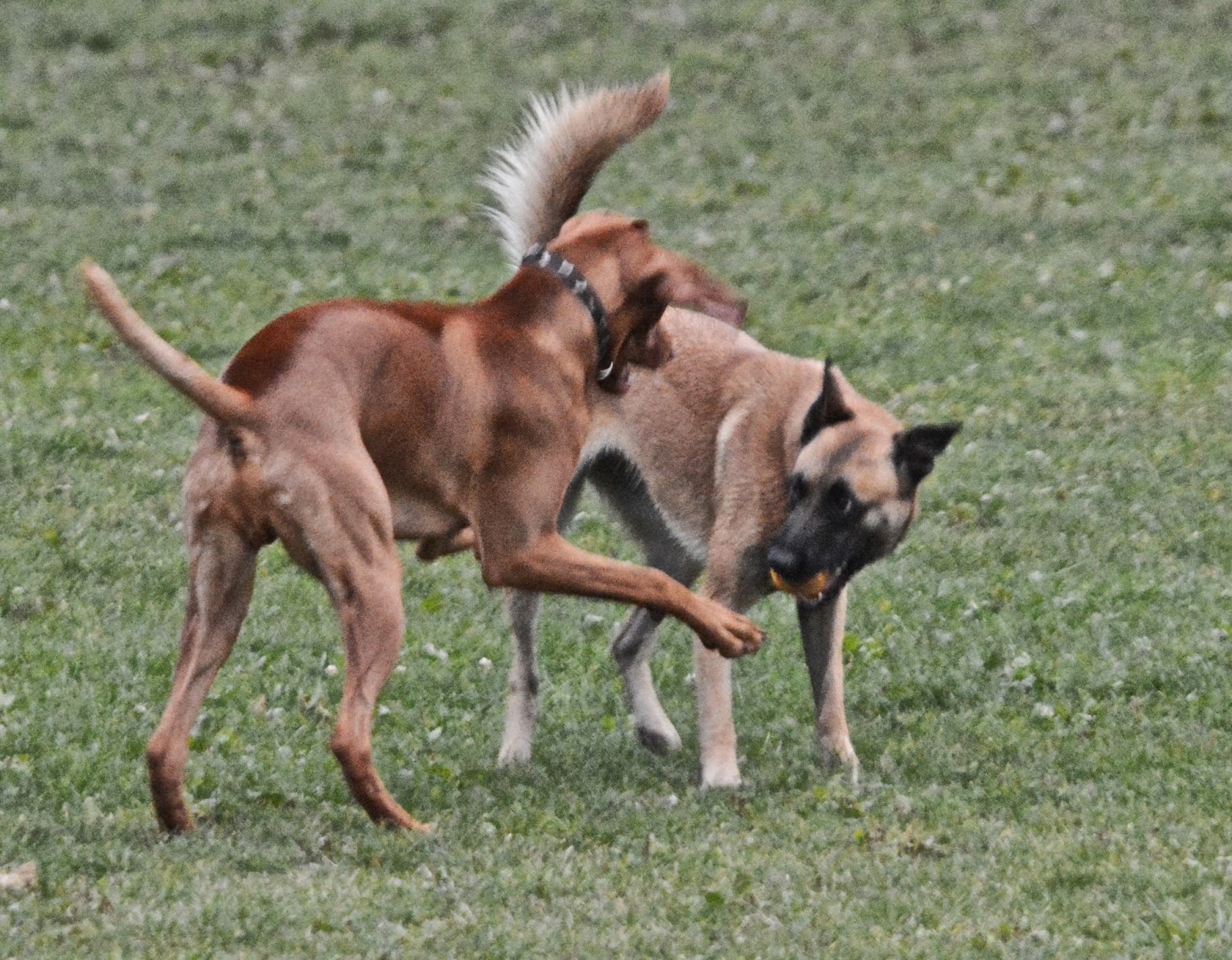 The one on the left was keen to grab the ball.. 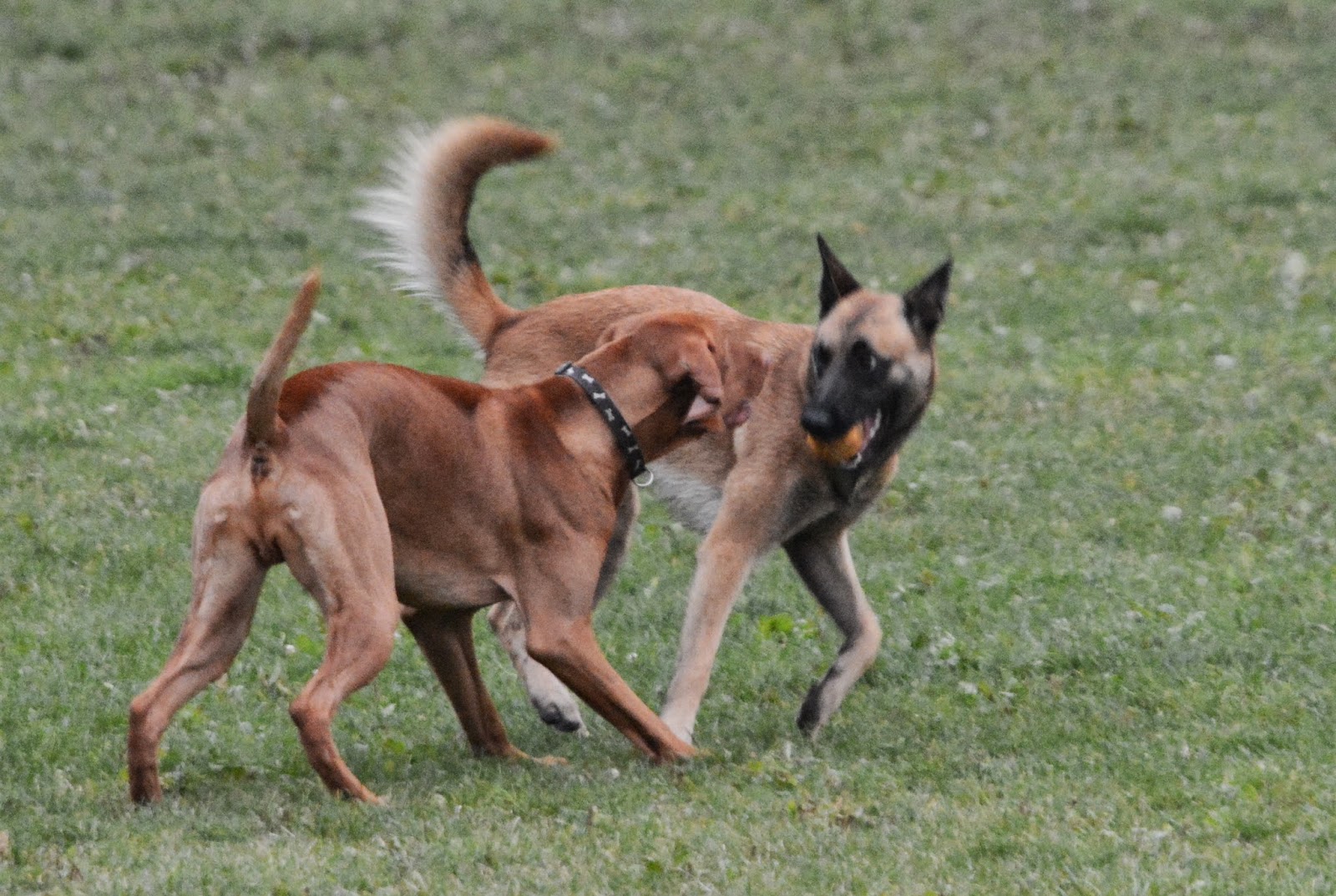 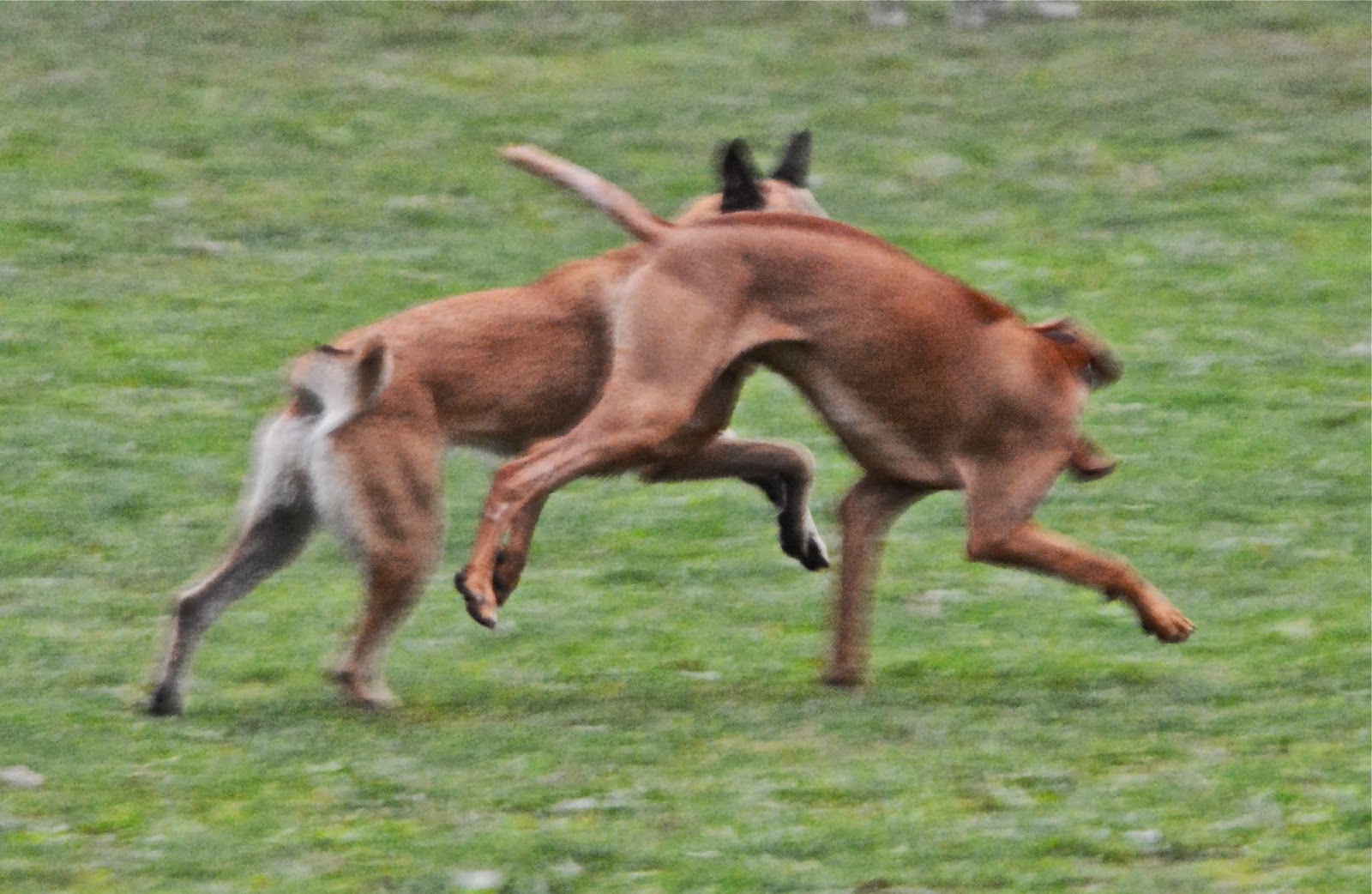 but seems to have thought better of the idea here. 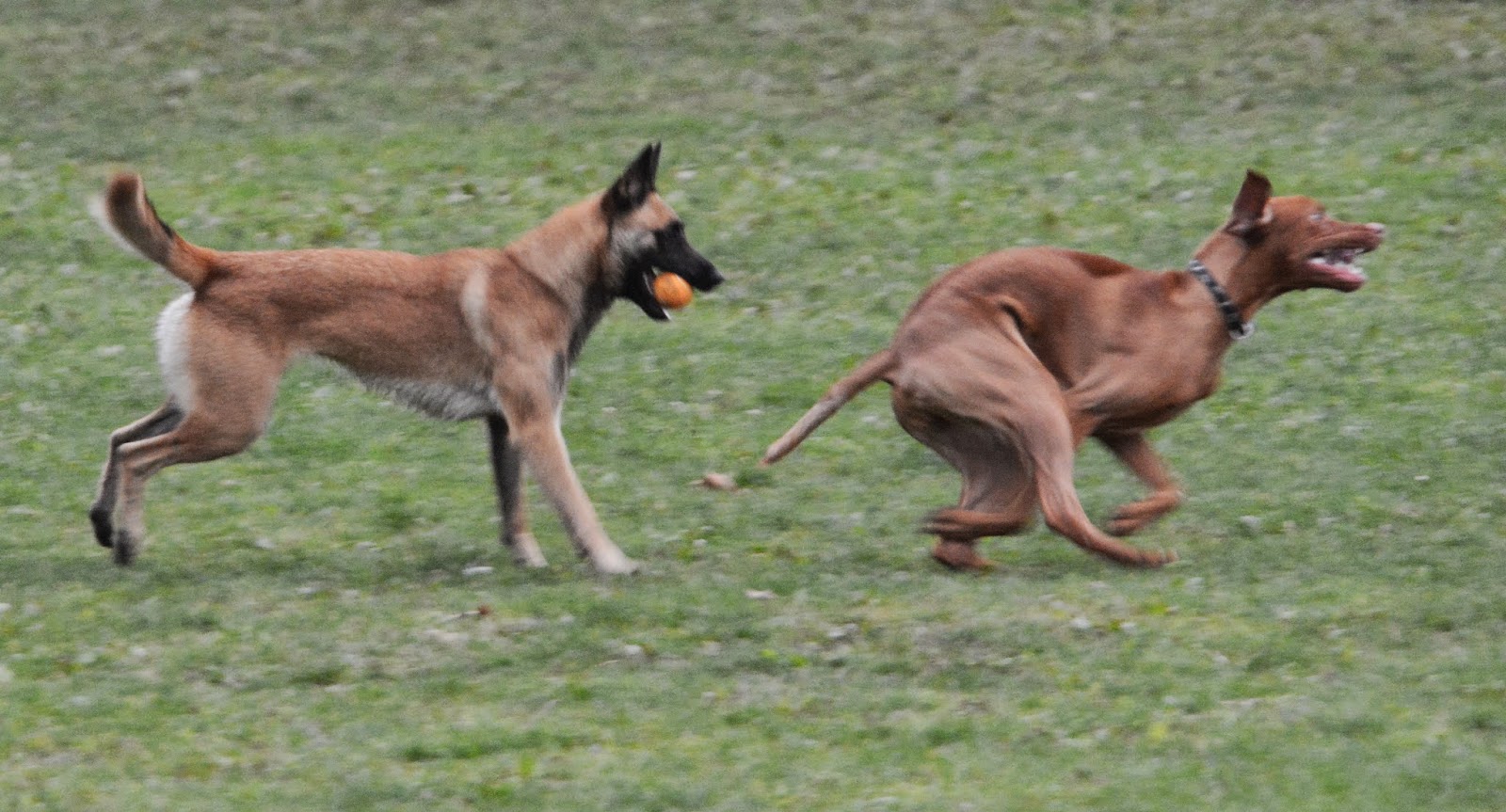 We stopped by a garden that I've been admiring for some time.  It's by a small recycling depot just before Granville Island.  That's where I took the orange flowers in the 2nd photo.  This yellow one was lovely too.  A gentleman about to drop off his recycling told me the people who tend that garden would have been delighted to see me taking photos as they had put hours of work into the garden that very day. We realized the work done was of the Autumn variety.  Lots of cleaning up and organizing, but there was still a variety of colour and species.  These roses brought Haley, the only granddaughter of fellow blogger and friend, ChrisJ, to mind as soon as I saw them.   Haley stated that a deep red rose is her favourite flower.  Just this morning, I have learned that she is fighting for her life after surgery related to Crohne's Disease resulted in a very serious infection.  Please keep her in your thoughts and/or prayers.  Oh Haley, you are so very loved.  Hang in there if you can! 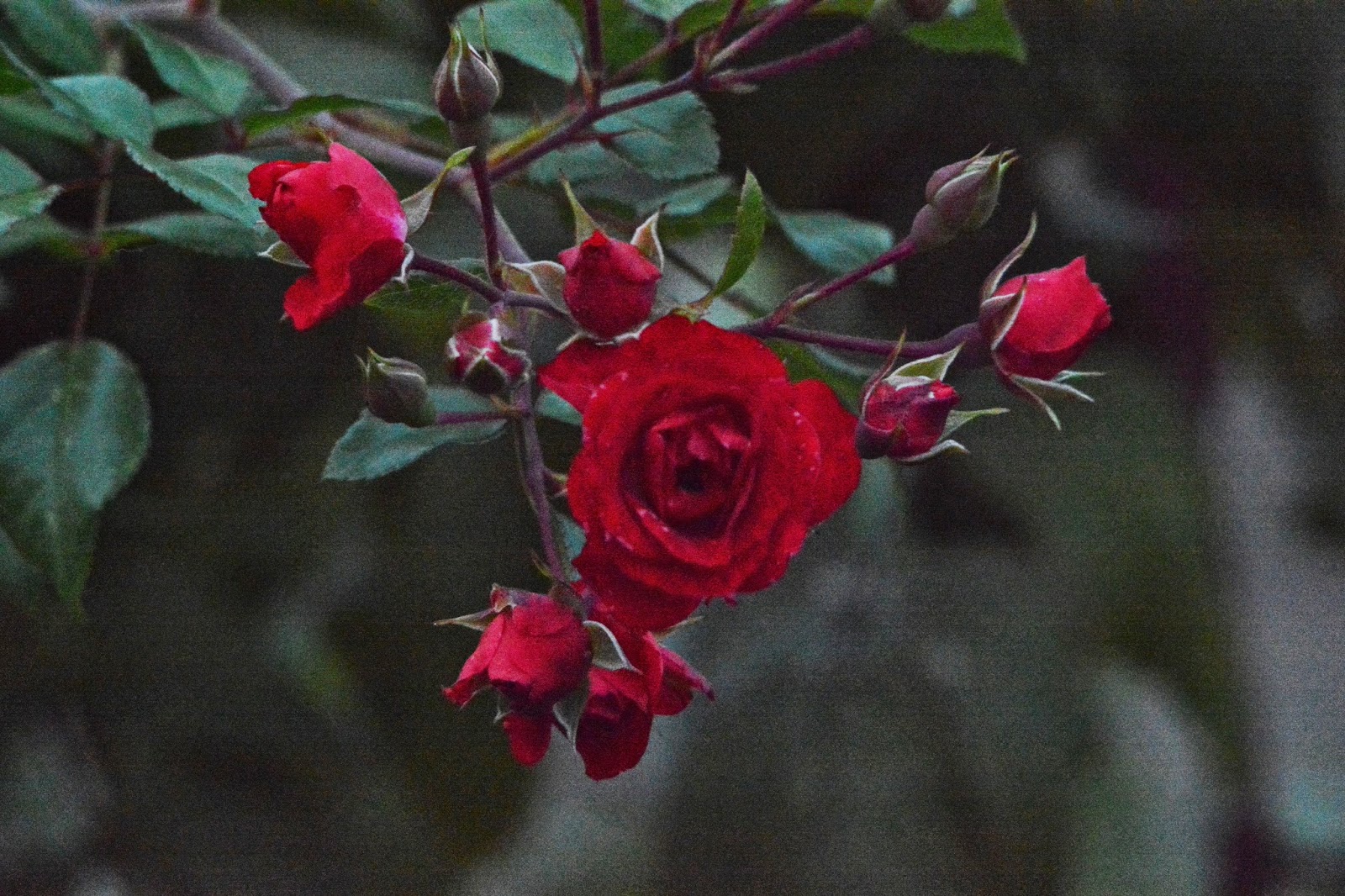 I took a few more flowers, including some that were past their prime but beautiful in their own right. 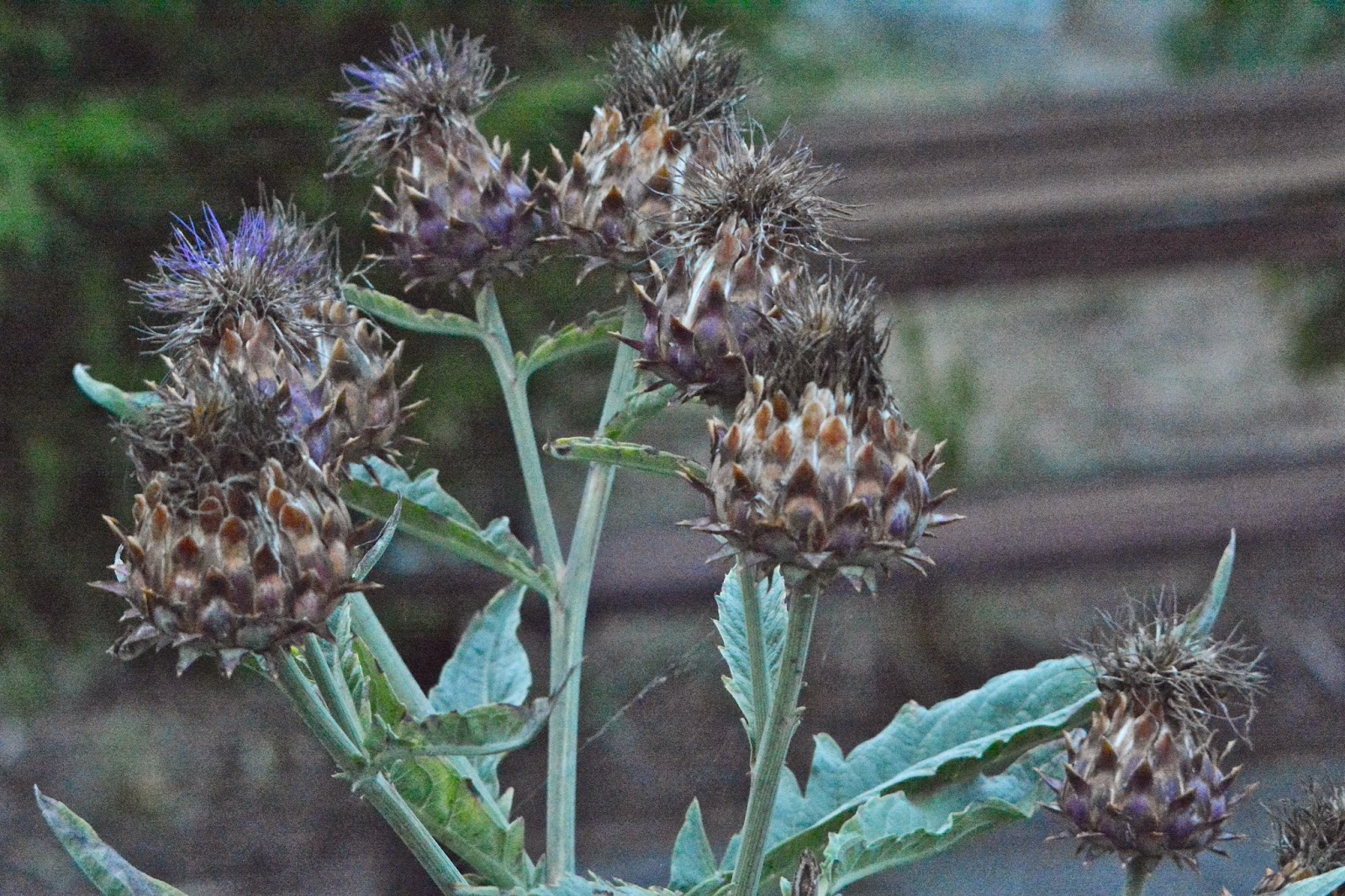 Bill made sure Black Jack was still warm enough.. 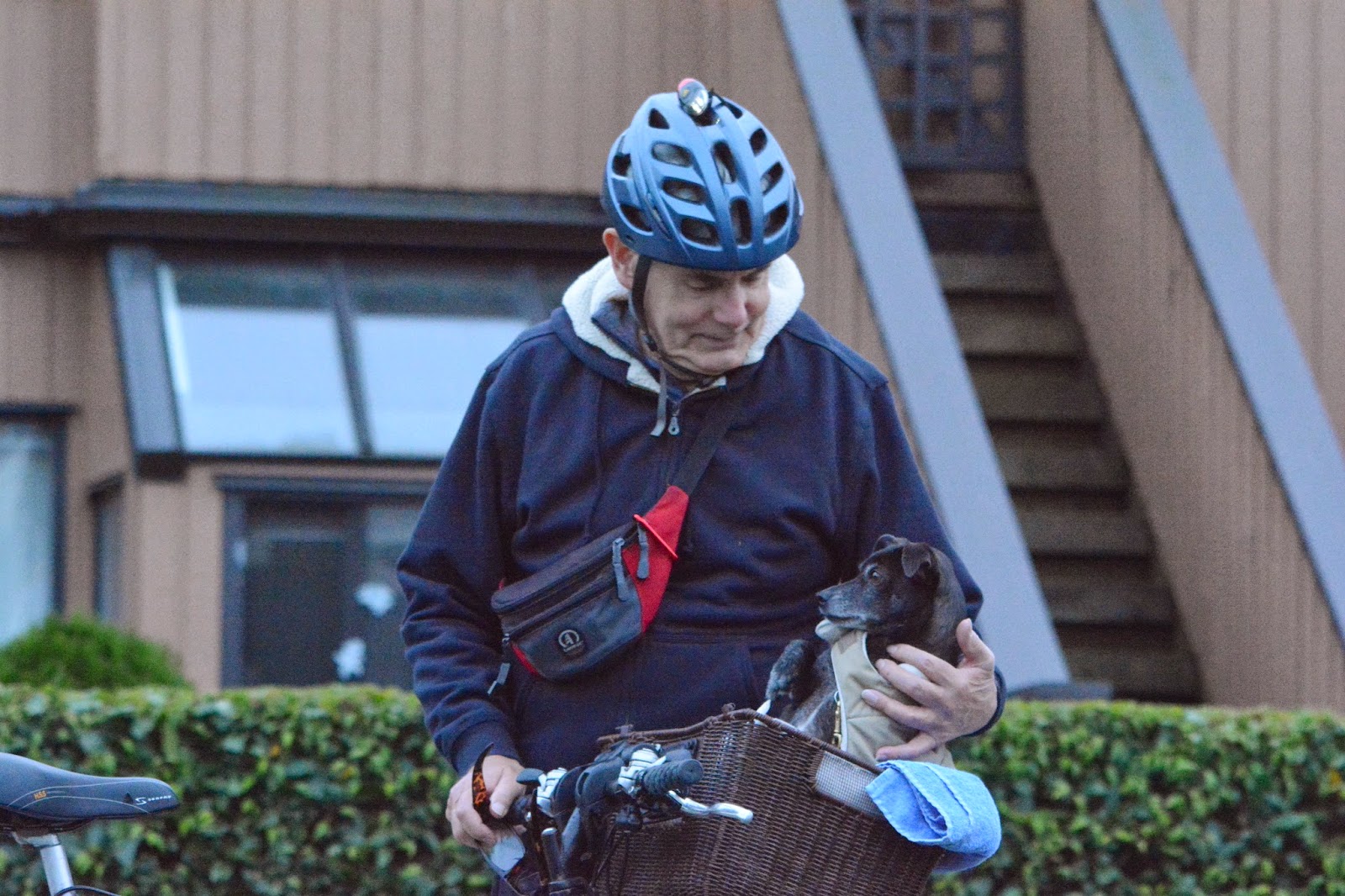 but it seemed her free run had done its work.  She was cozy and happy with her dear Bill. 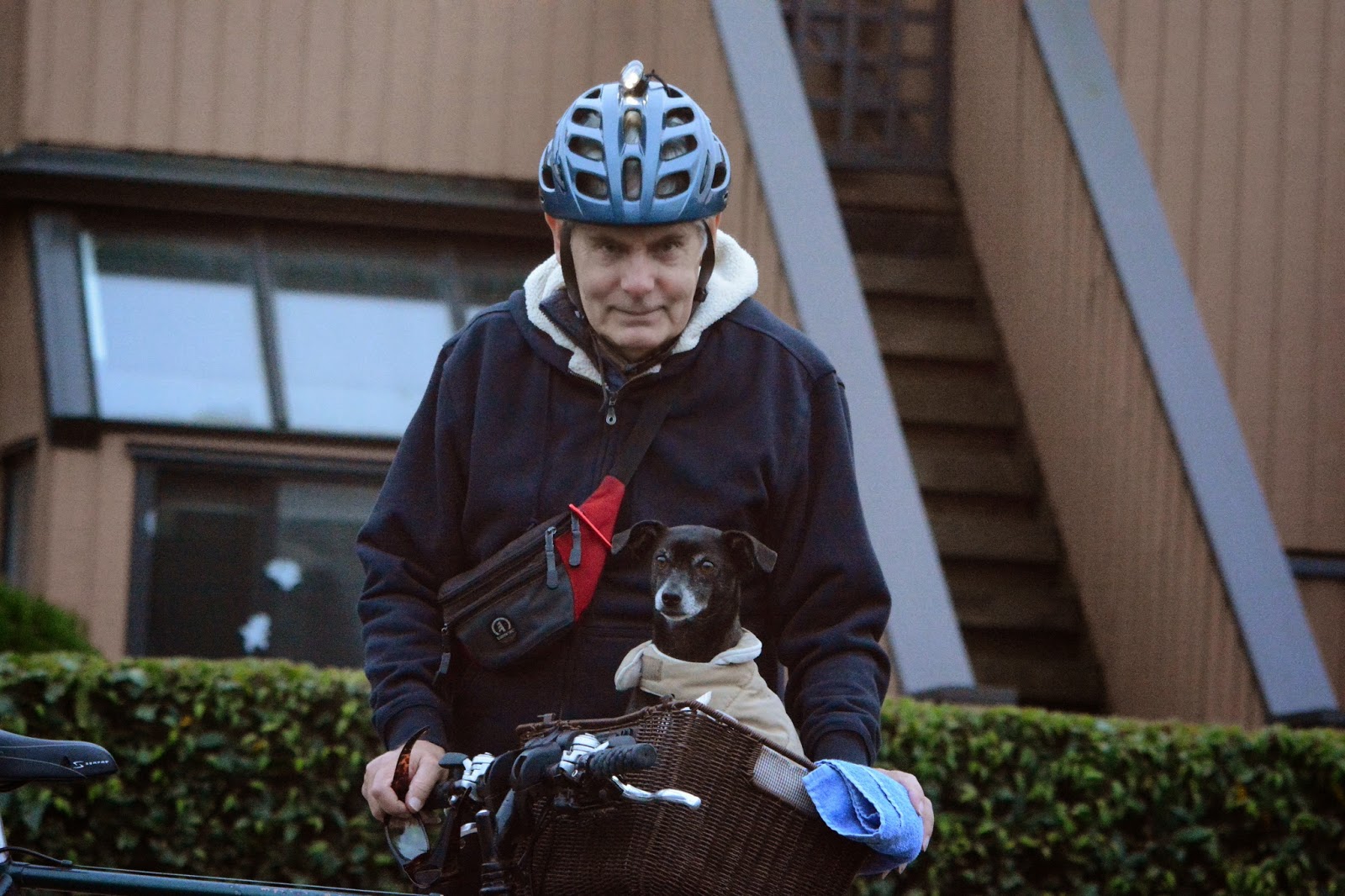 I took a few reflection shots.. 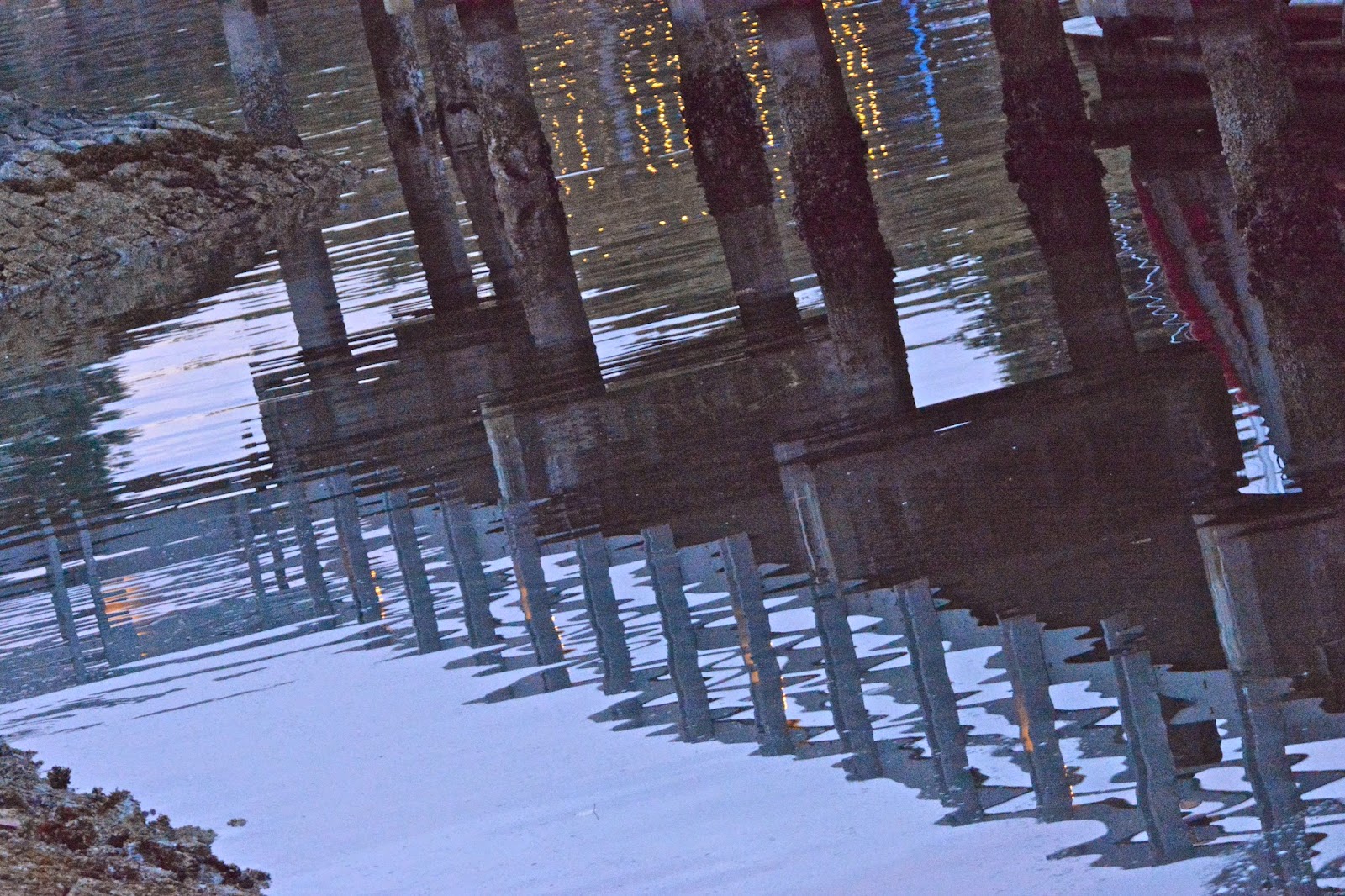 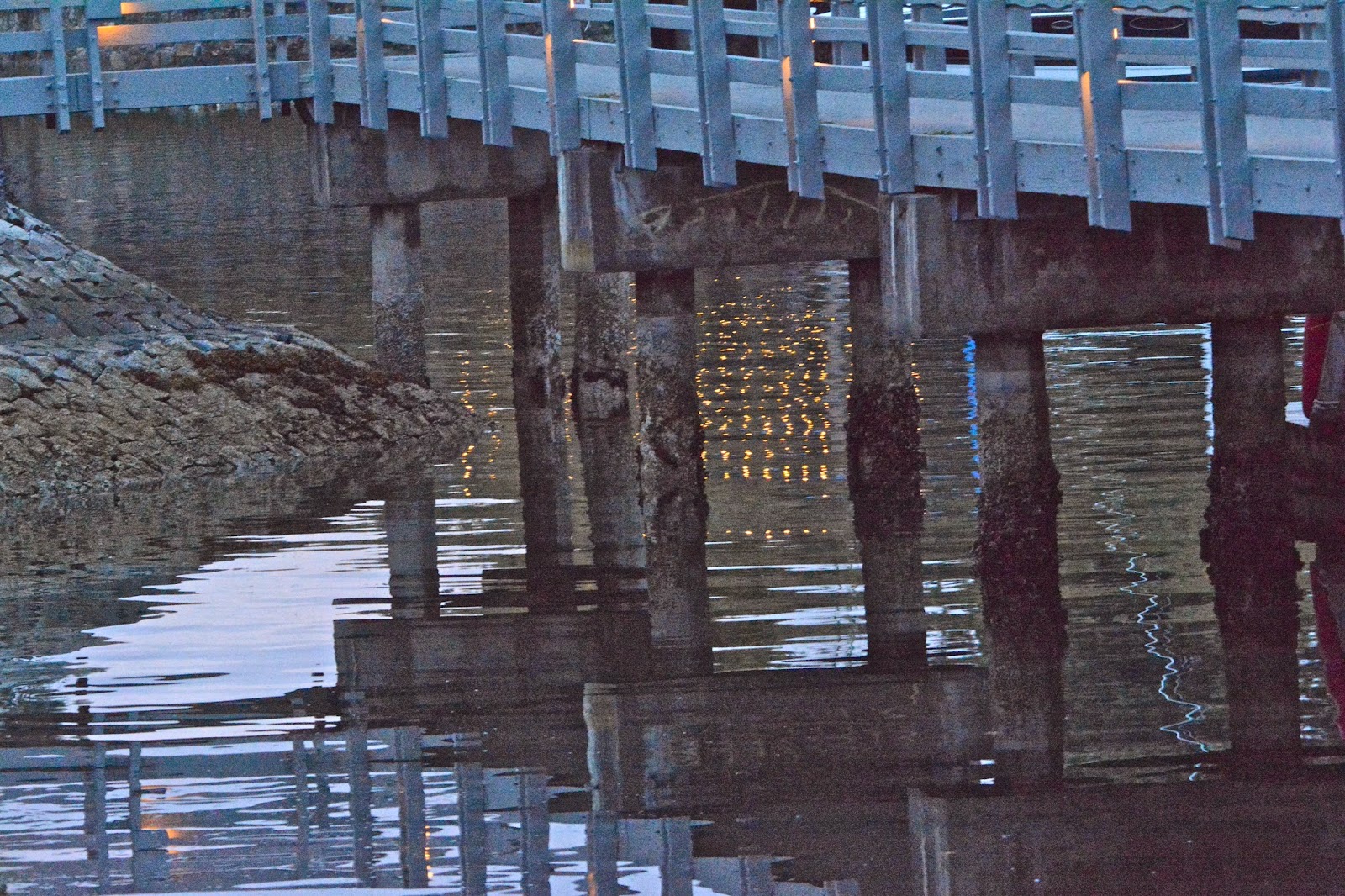 and one to show the bike lane, seawall and surroundings. 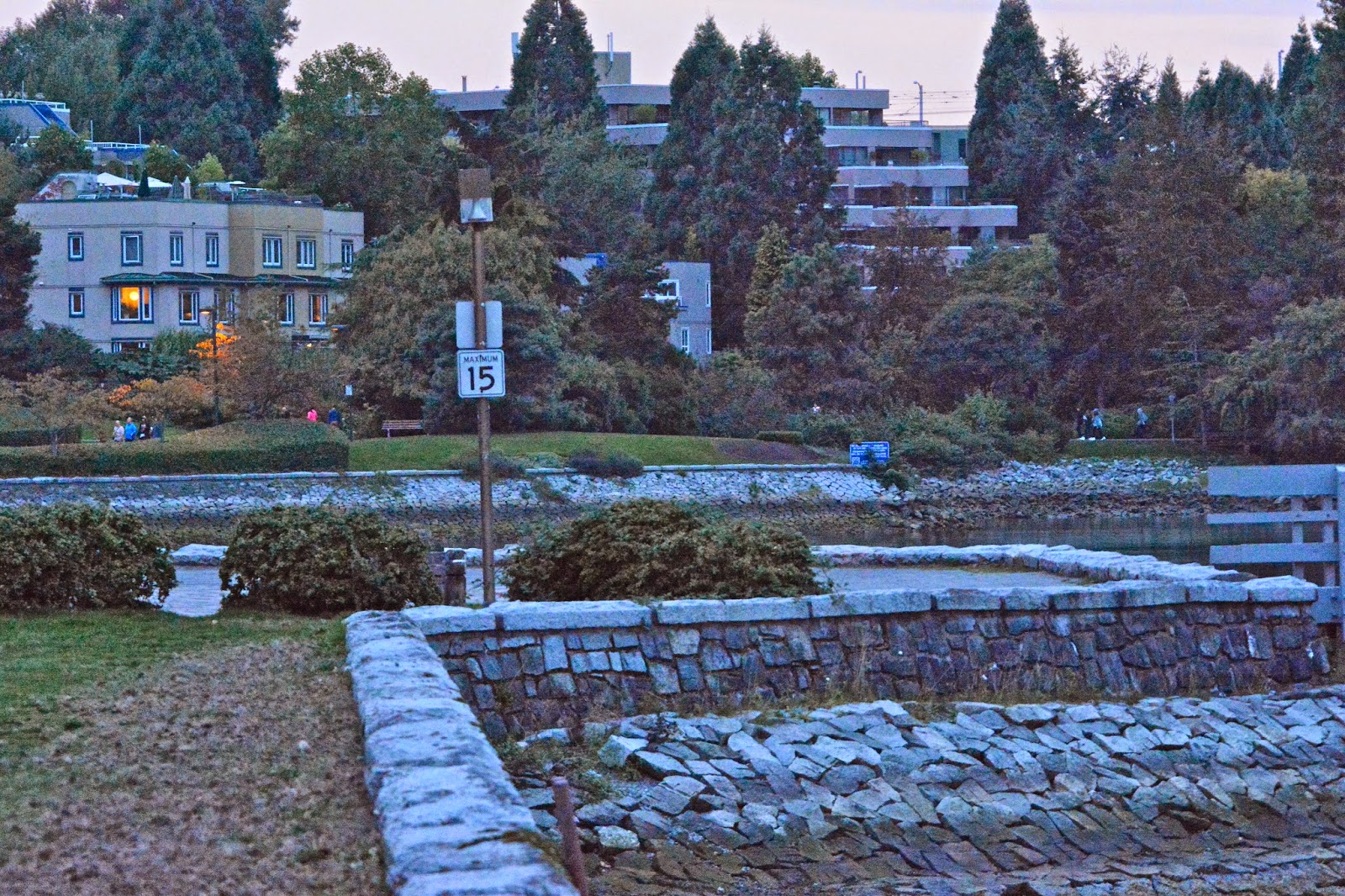 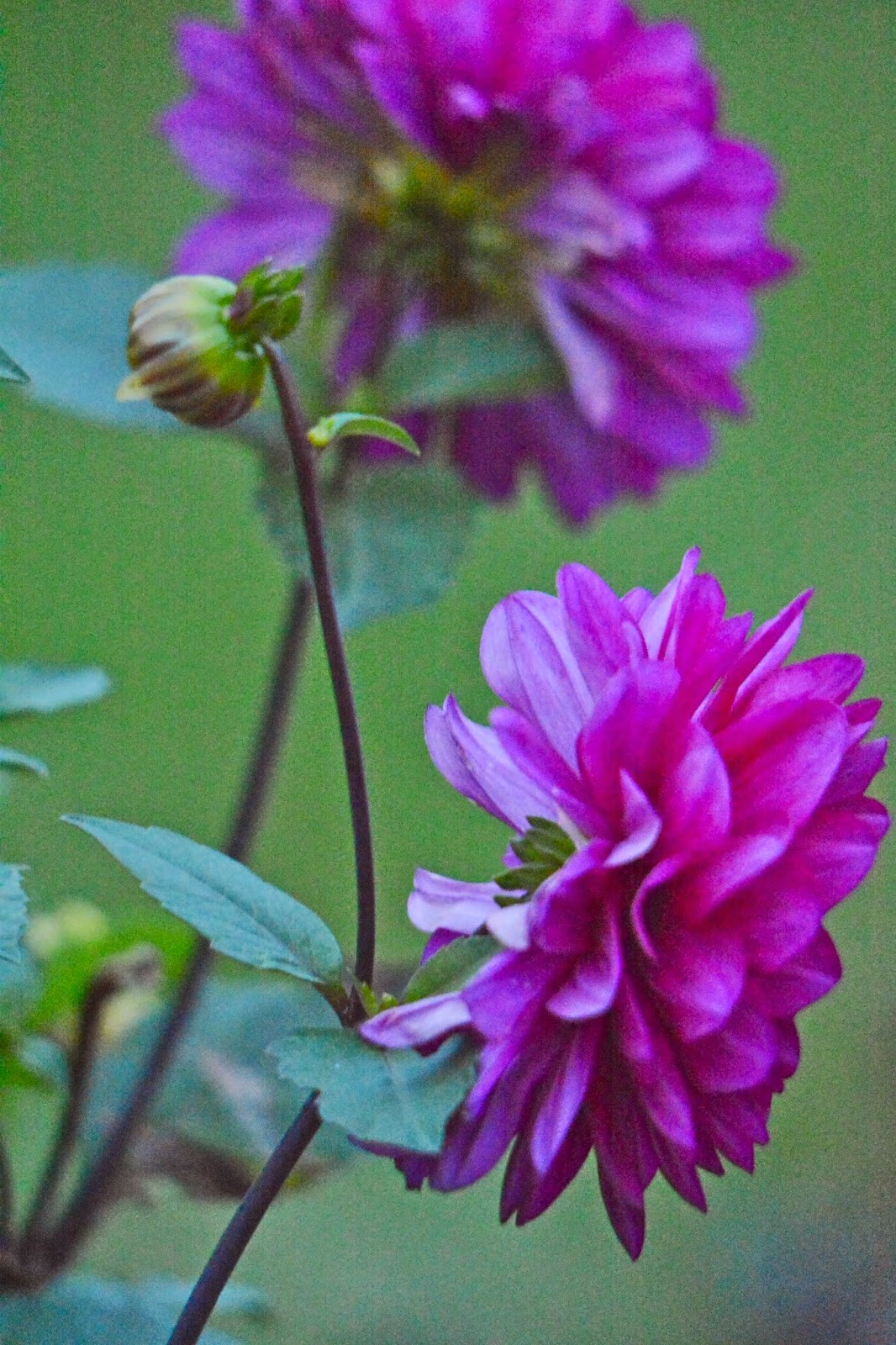 and then we were on our way to the Granville Island Community Centre for a quick stop.  I loved this poster in the window.  Steve Palmier, the artist, also works as an architect.  His web site is rich with quite a variety of wonderful art. 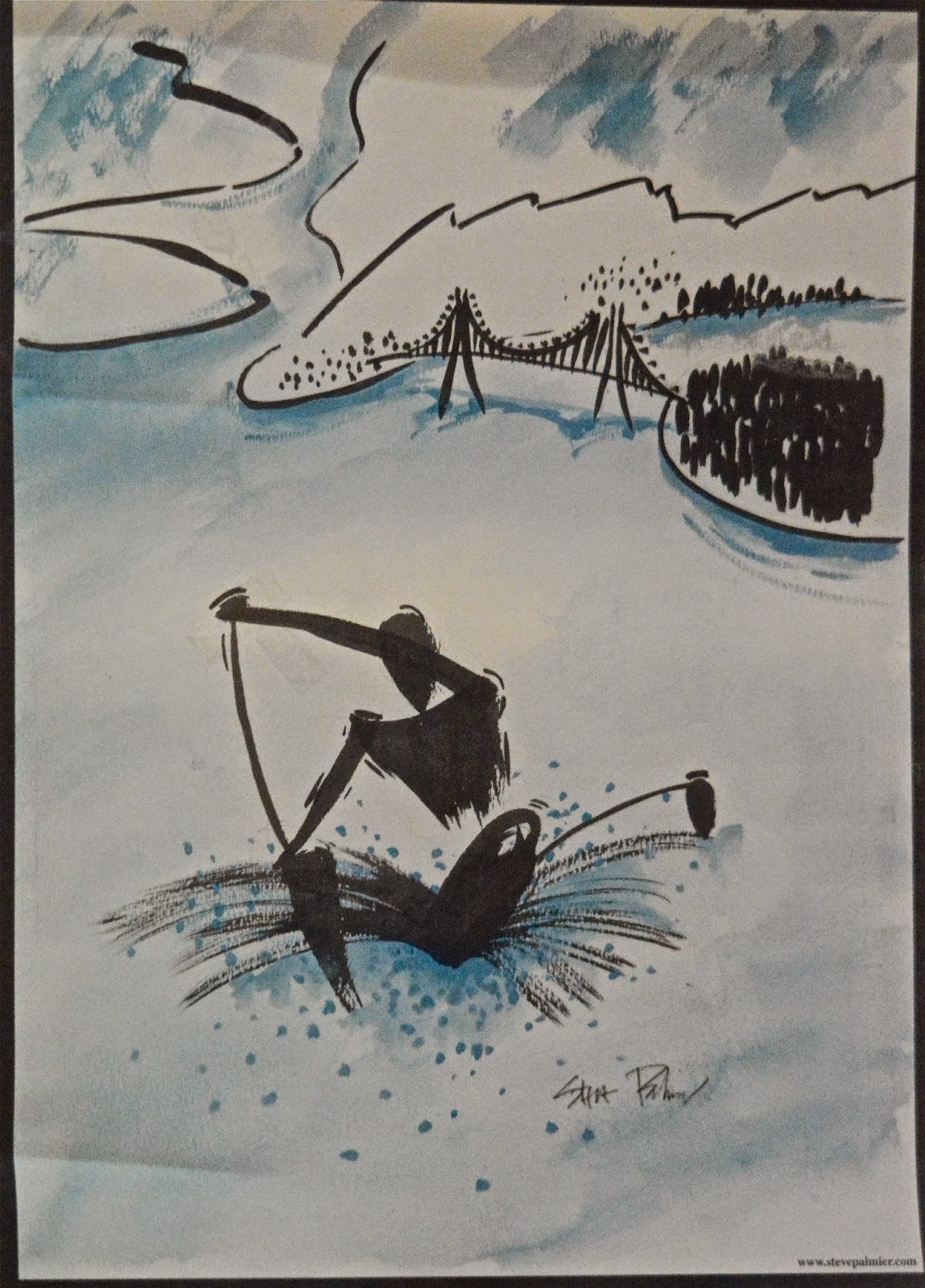 It was completely dark as the Aquabus dropped us back on our side of the creek.  Its blue lights (and orange sign) reflected in the water was my final shot of the day.  We counted it another good one as we headed home.  Thanks so much for stopping by, and a very happy Friday to each one of you! 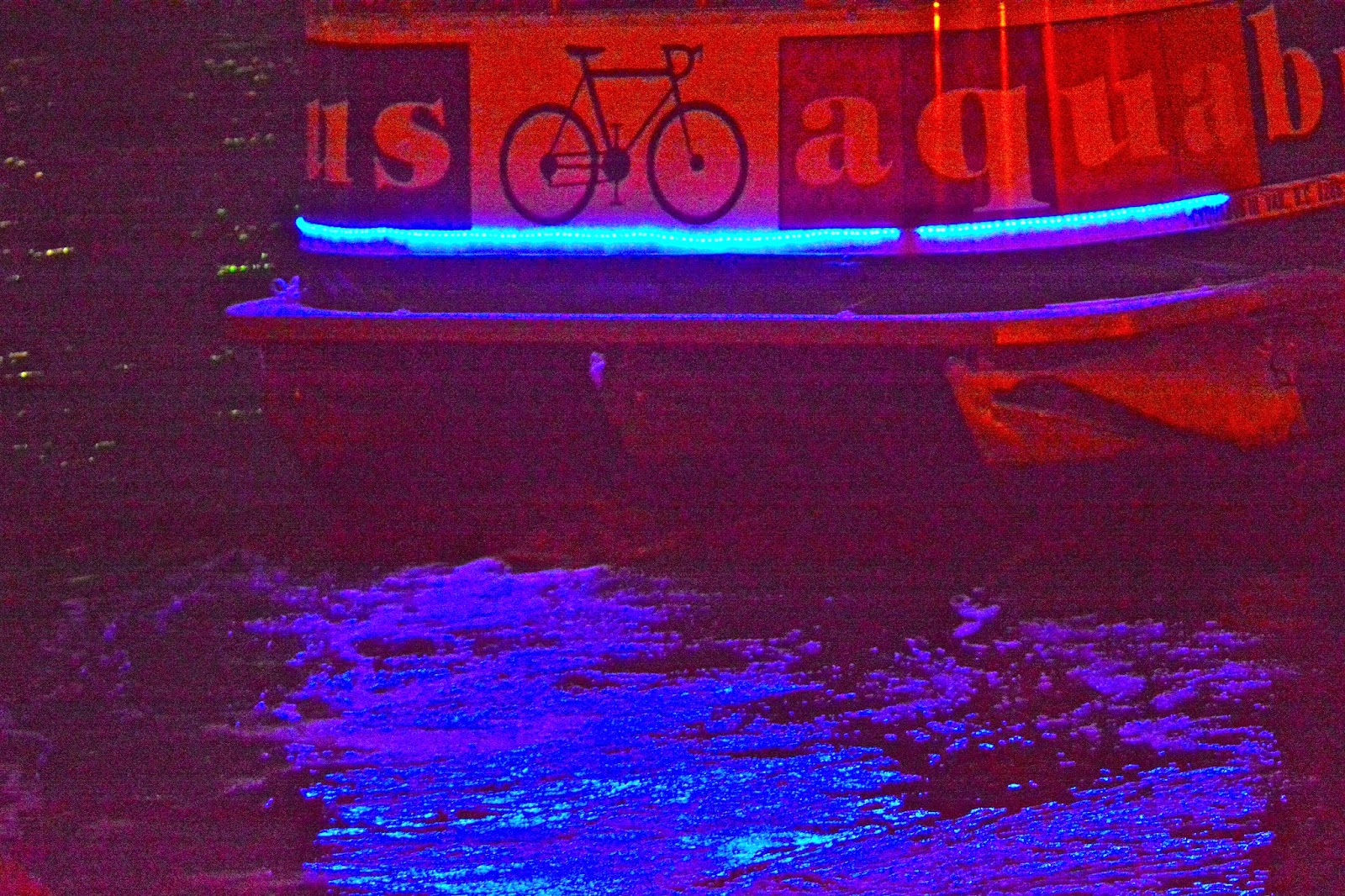