The stories of my days fall, one upon the other, in a never ending stream.  I'm linking  with Photo Story Friday on this Hallowe'en Day to share yesterday's narratives.  Many thanks to "Chaos and Bliss" for hosting.

Before getting to the stories, the Hallowe'en holiday must be acknowledged. I confess that it may be close to my least favourite holiday.  Eggs (and worse) thrown on the houses of some people in my small hometown when I was a child, fireworks here in Vancouver that terrify pets and wildlife, junk food that is touted as harmless though it sets people up for a "sweet-tooth" addiction that could very well translate to later health problems, not to mention the commercialism..  just too many things about that day that bother me.  That said, when I see little ones with happy faces and fun costumes, I understand and appreciate that many of them look forward to this day for weeks if not months.  I wish them the very best.  In the spirit of innocent and fanciful imaginations, I will post this lovely recording by Vladimir Horowitz of Schumann's "Scenes from Childhood".
And on with the stories: A robin, the first I had seen in quite a while, sat in the tree outside our balcony window as Bill and I ate breakfast.  We are well into Vancouver's Autumn season but I grew up in Quebec.  The first robin is still a sign of Spring for me and so it was a happy start to a rainy day yesterday. 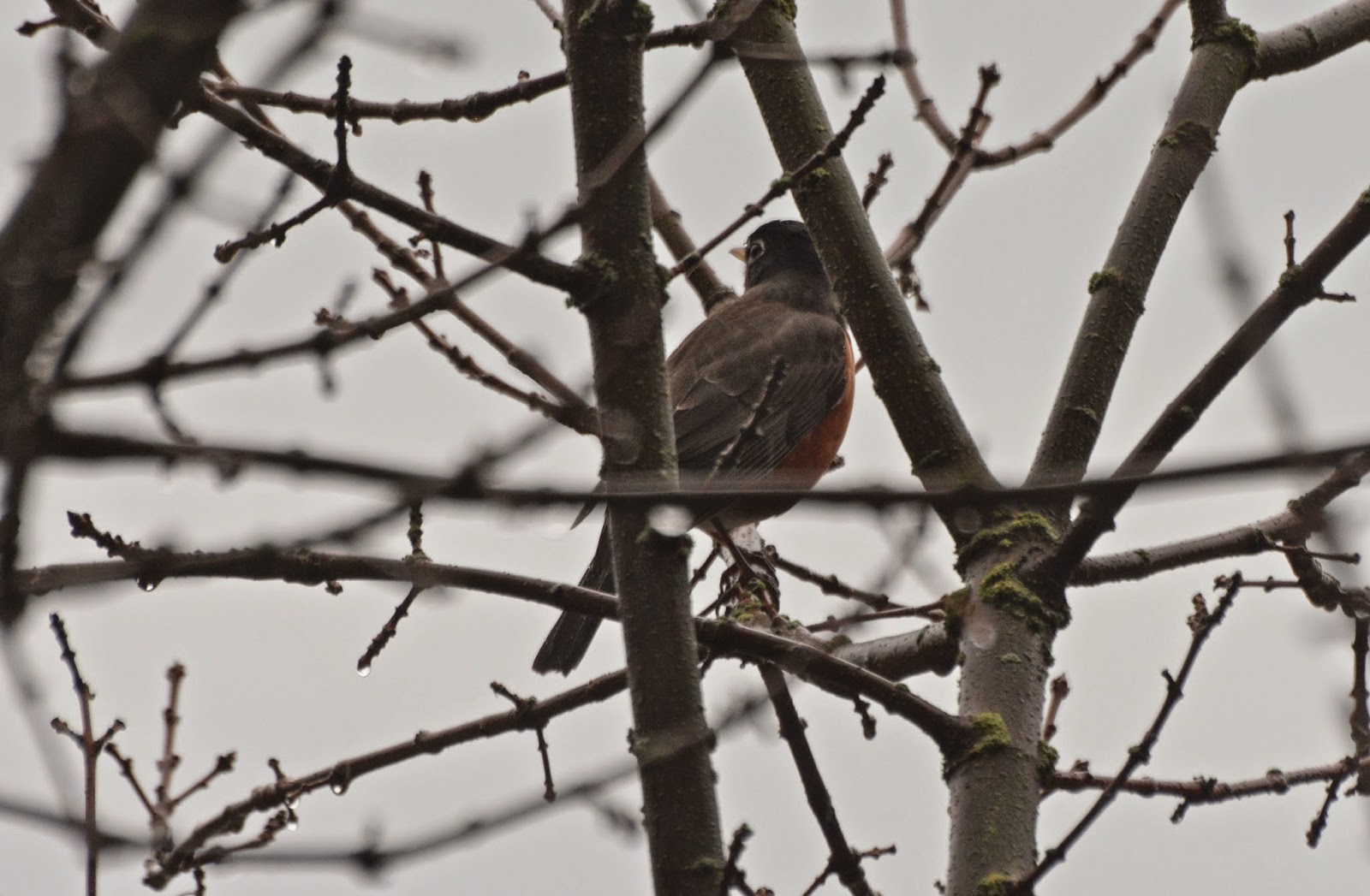 As we ate, Bill and I talked about the dance performance we had seen the evening before.  This is Kara Nolte.  The photo below was taken by RD Cane, as noted on the Scotia Dance Centre's blog in a  post about a free (Wow!) program called 12 minutes Max. 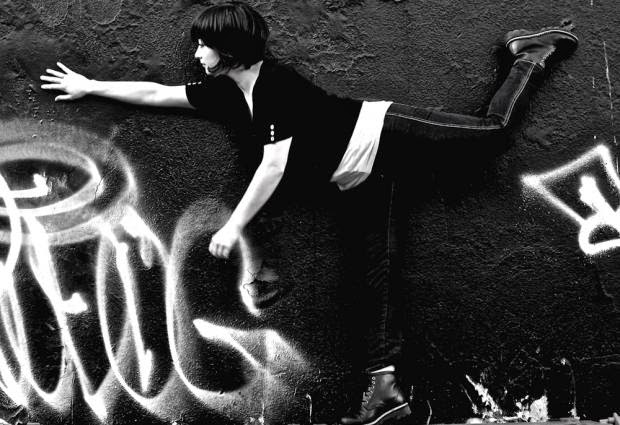 We saw four choreographies still in the workshop phase.  Kara's dance was a very slow and subtle series of fluid movements that Bill described as mesmerizing.  We are not dancers; to have a partner not only willing to attend a dance event but to stay for the talkback and engage in a conversation about it the morning after still leaves me pinching myself at my good fortune.  As for the dancers and choreographers, I am struck by their courage, their creativity, their talent.  The energy too!  Walter Kubanek and Hilary Maxwell threw each other about the dance floor in a mind-spinning series of lightening-quick moves that thrilled both of us.  And, then, there was the dancer who sat in a pile of earth that she had carefully placed on a white mat.  She slowly picked strawberries that had been hidden under that dirt, tasting one, throwing some aside, and later revealing that there was one strawberry she was never able to find.  Who could have guessed that was a dance investigating grief?  I didn't, found the courage to say so and wasn't riduculed. Audience feedback was encouraged.  I thought about the risks all artists take to be true to themselves while considering the response of strangers to their performance.

Later in the day, we enjoyed our treats at the Harrison Galleries café where we worked on crosswords and enjoyed the art, as we do almost every afternoon.  Yesterday, the person who prepared our drinks put little notes on the cups with our names.  The personal touch of her stick drawings warmed my heart. 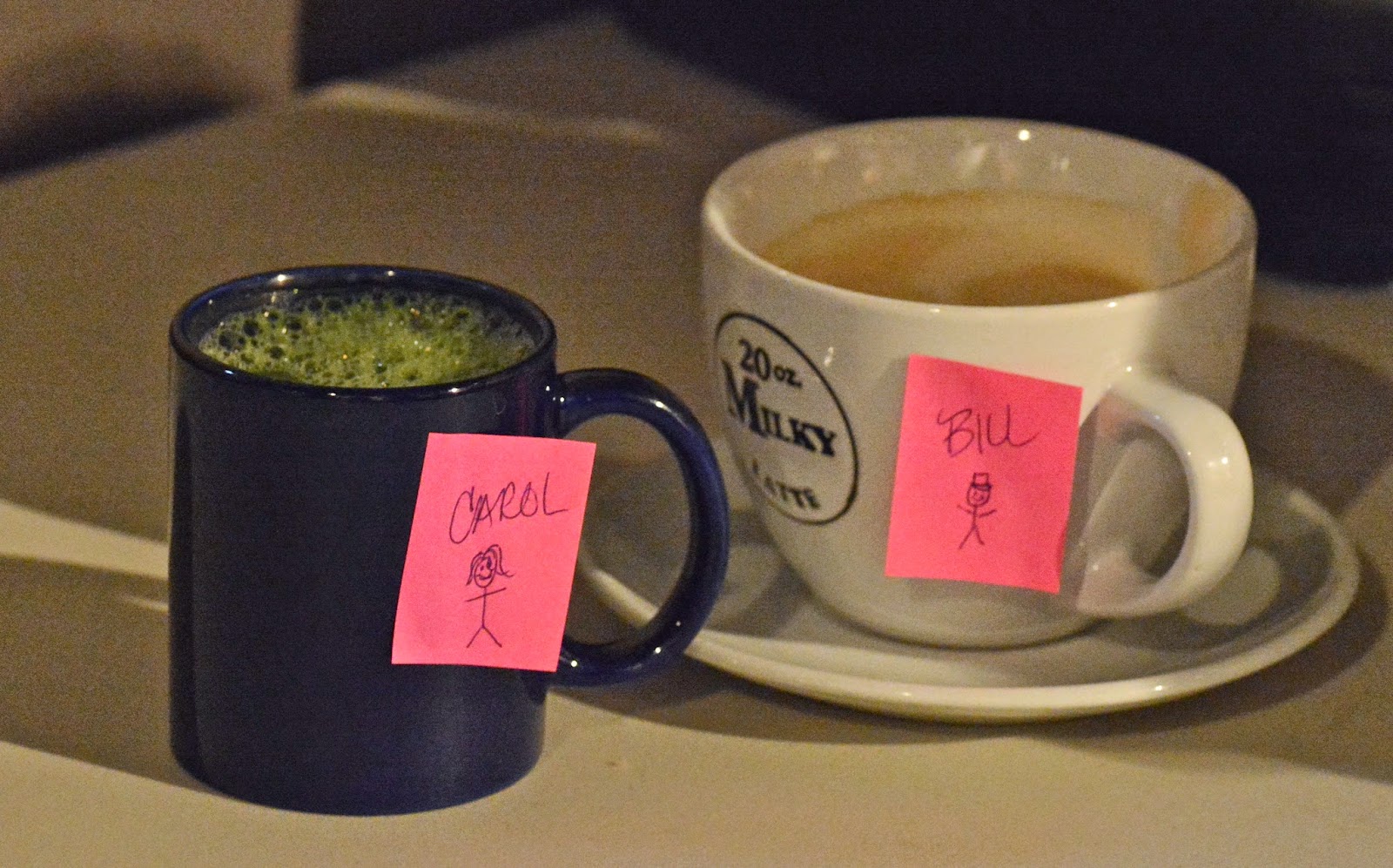 We rushed home from the café as we had our second cultural night out in a row coming up that evening.  Big deal for two seniors :)  I picked up some groceries and was rushing home so that we could eat before going out, but then, I met Julia.  I don't know her very well.  She lives in my building and we've spoken a few times in the elevator.  She was rushing too..  right by me with a large bag, and in it, a leg sticking out.  She said something..  I only half heard it, and muttered sympathetic phrases but as I walked away, the information flooded my mind..  "throwing these dogs out..  had them for 17 years..  made by my granddaughter..  I'm heartbroken"..  All I could think was that the moment had to be caught and the story shared.  I ran after her, asking if I could take photos and perhaps learn a few more details.  Below, you see Hound and two puppies, Bert and Ernie.  I think it is Bert who was designed to lie on his back.  Julia's granddaughter made the papier-mâché dogs when Julia's Basset Hound, named (appropriately) Hound, died.  They were to comfort her in her loss. 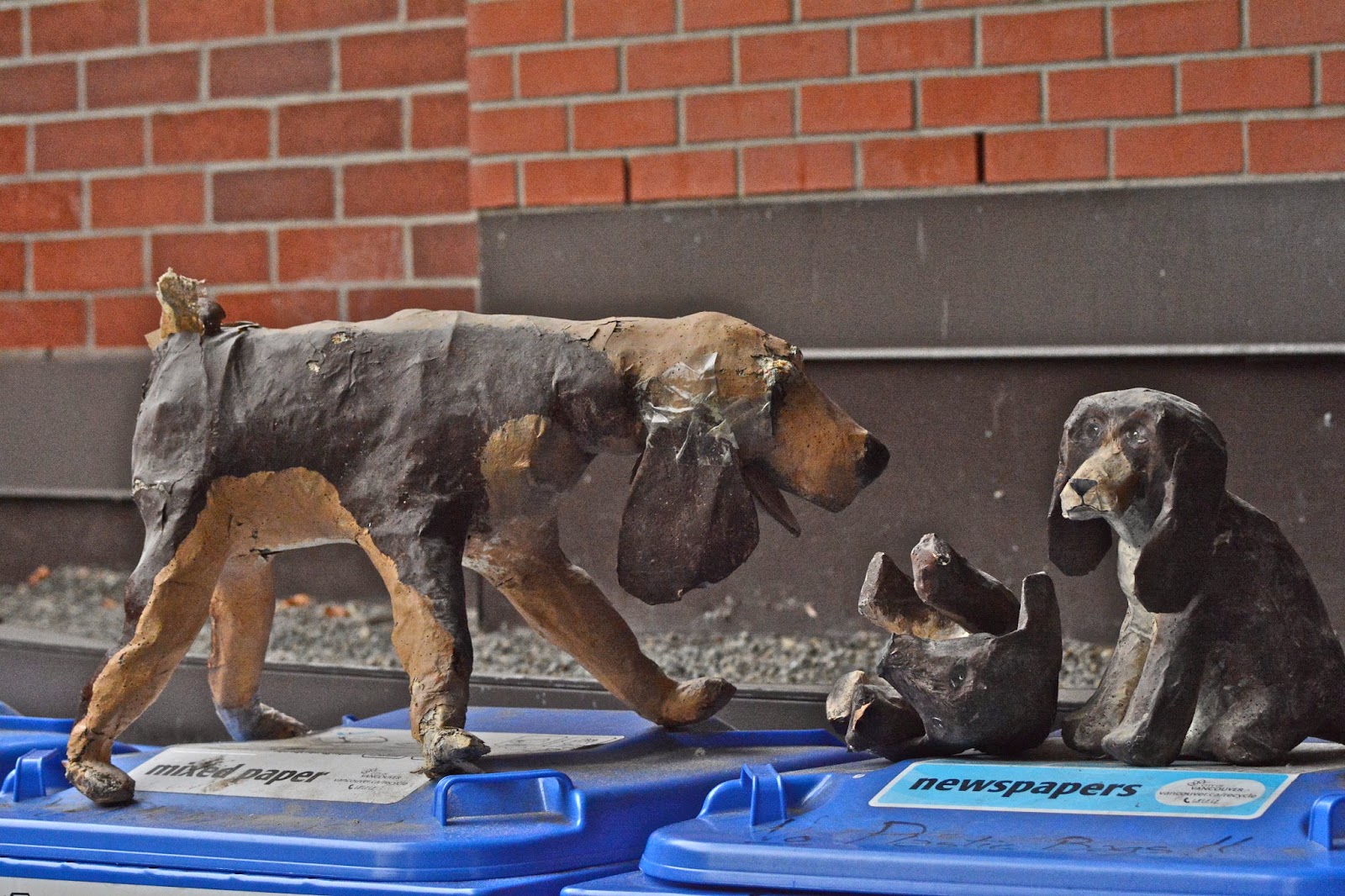 Julia has enjoyed them greatly but their insides are coming free and leave a trail wherever the dogs are set down.  The time has come to part with them.  At first, I thought I would just take photos of Hound, Bert and Ernie, 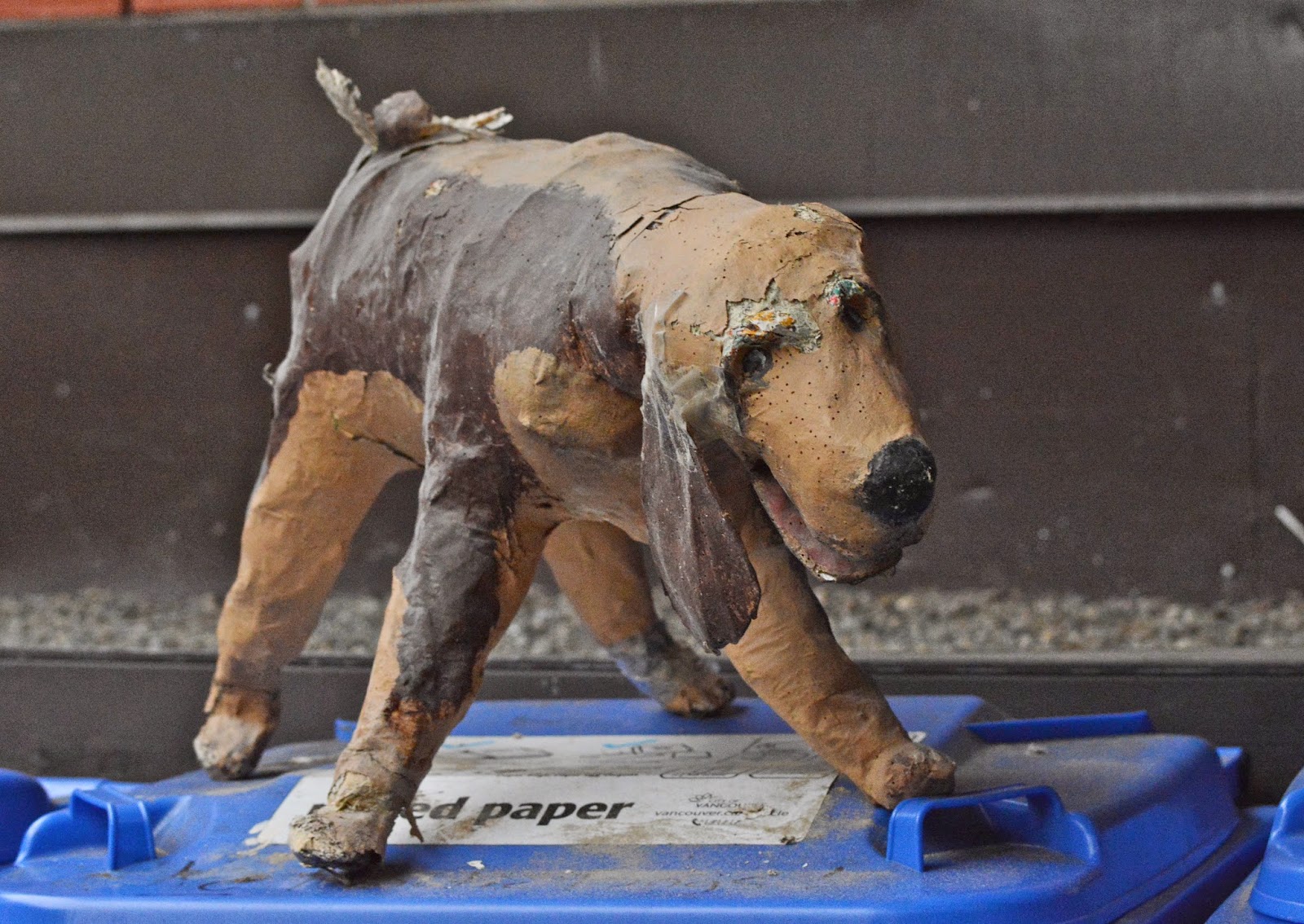 but then I thought it would be good to include Julia as well.  She was truly heartbroken, but she wasn't truly crying in this photo.  This is her dramatized version for the camera and for her granddaughter. 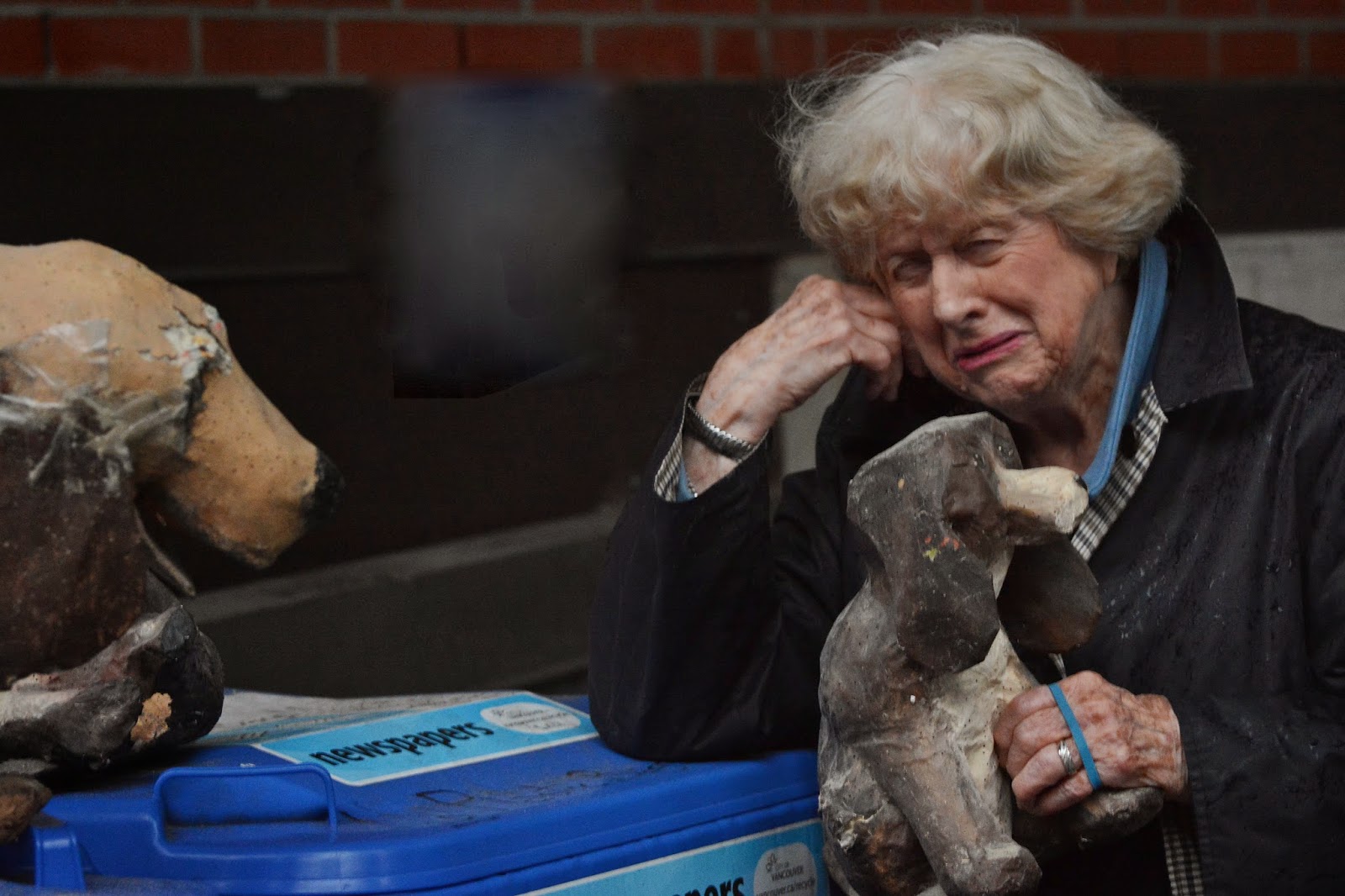 She became almost gleeful as she did her "devastated" impression, and in fact, there was laughter throughout our photography session, though by now, my heart was breaking too. 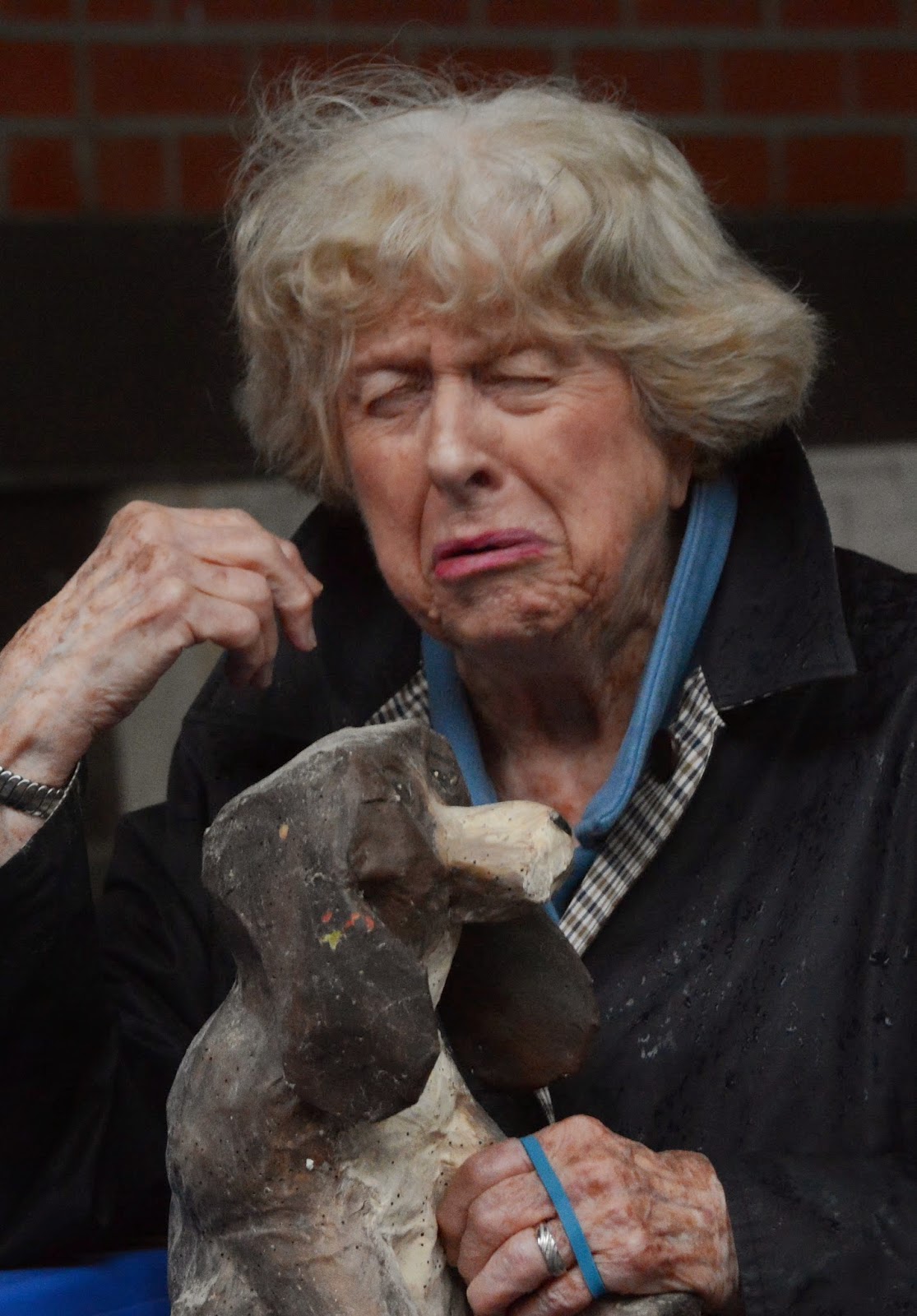 I think Julia's granddaughter was very young..  perhaps just approaching her teens as she created this little family for Julia.  What beautiful expressions in the faces of each dog.  I sympathize with Julia.  It is hard to let go.  But let go, she did, and in the end, Hound, Bert and Ernie have been immortalized in the telling of this story.  RIP sweet dogs.  And, bravo to Julia for jumping into the spirit of the moment with unabashed enthusiasm and love. 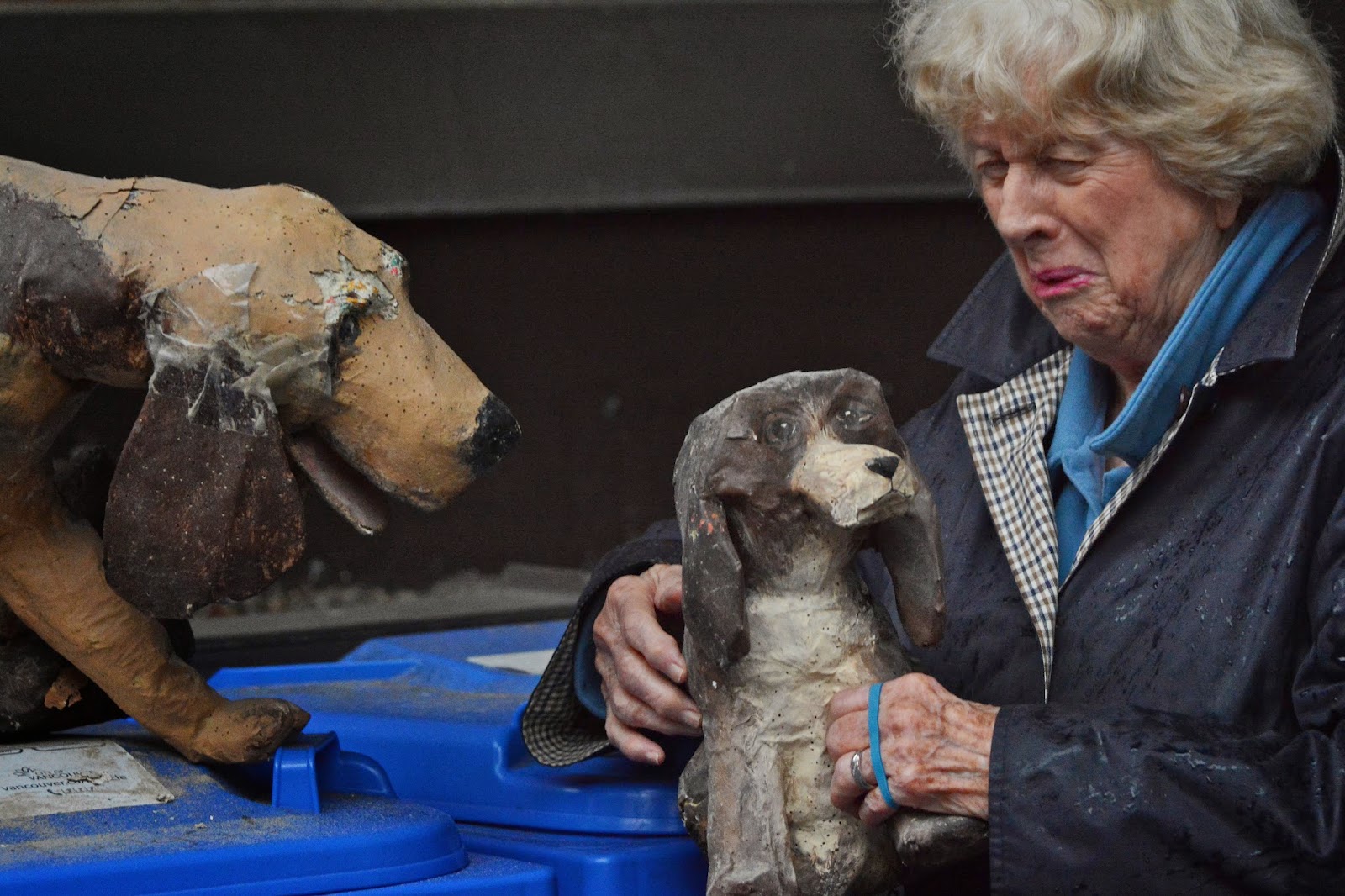 I know I have told more than enough stories, but there is another one.  This one tells of Shane Koyczan's experience (one word of profanity around the 5-minute mark in that video),

one that he continues to live and will continue to live for the rest of his life.  It is a heartbreaking one.  In fact, it occurs to me that this is a heartbreaking post but tempered, I'm hoping you will recognize, with incredible beauty.  The opera we attended last evening is called Stickboy and it told Shane's story of being bullied and then becoming a bully himself. 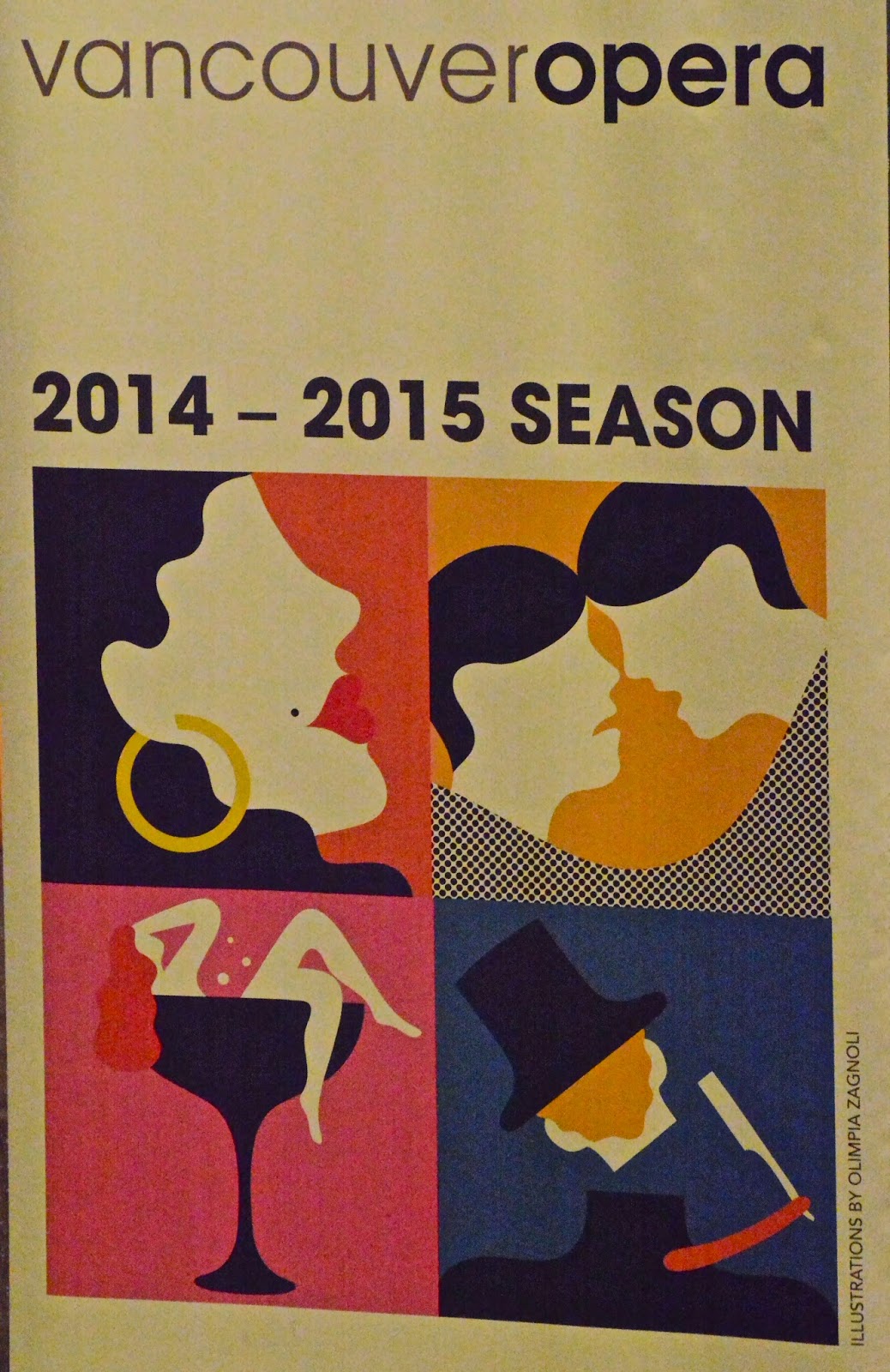 We attended the pre-show talk and I took some pictures of art by high school students.  I didn't get the full information as to how these pieces were selected to go on the walls of The Playhouse, but it was pretty clear that they were in response to bullying. 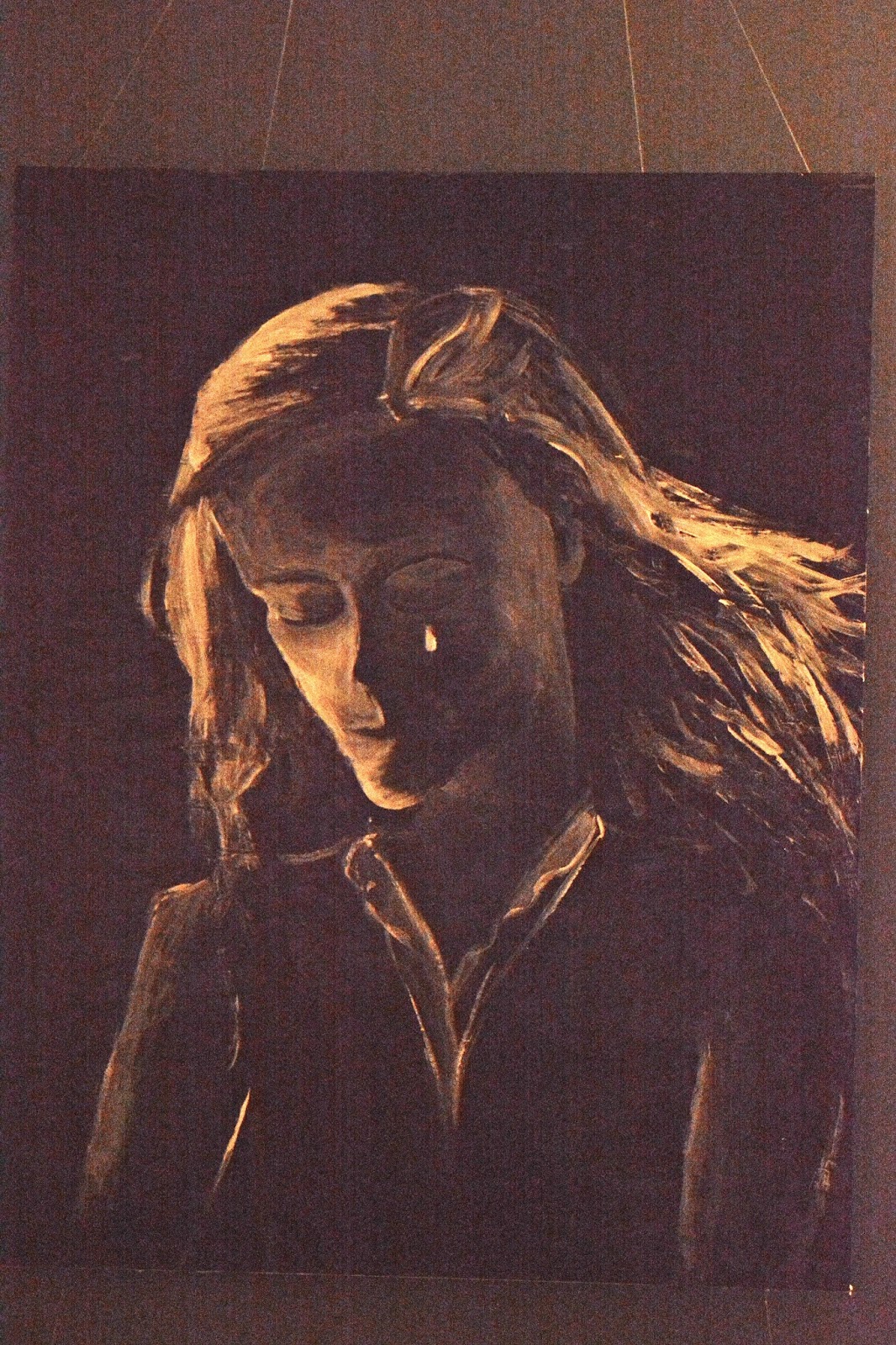 Until we learn to put up barriers, we do present our hearts for all to see and appreciate. 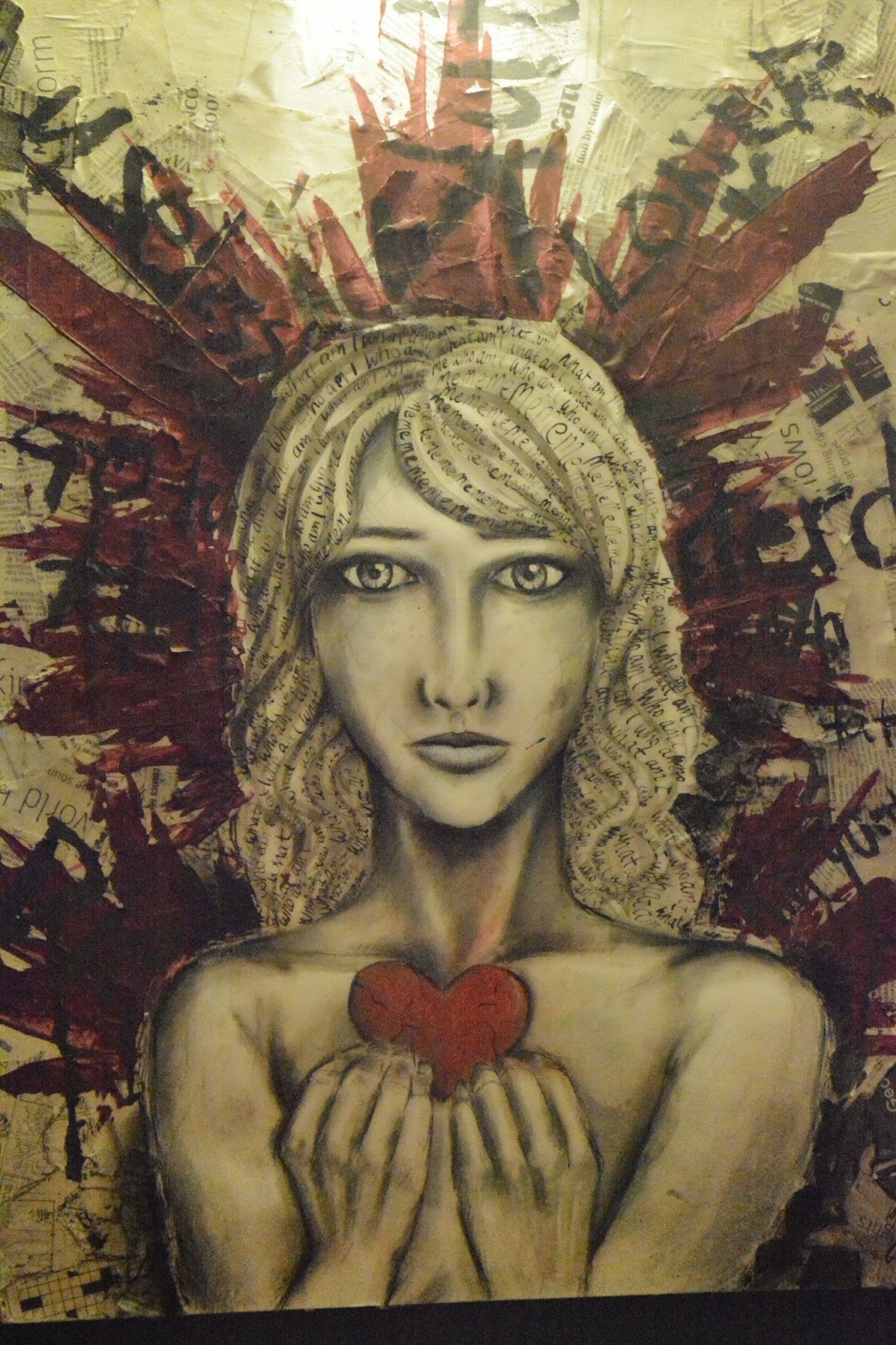 The line across the middle of the front page of our program said in bold letters, "There's a bully in all of us." 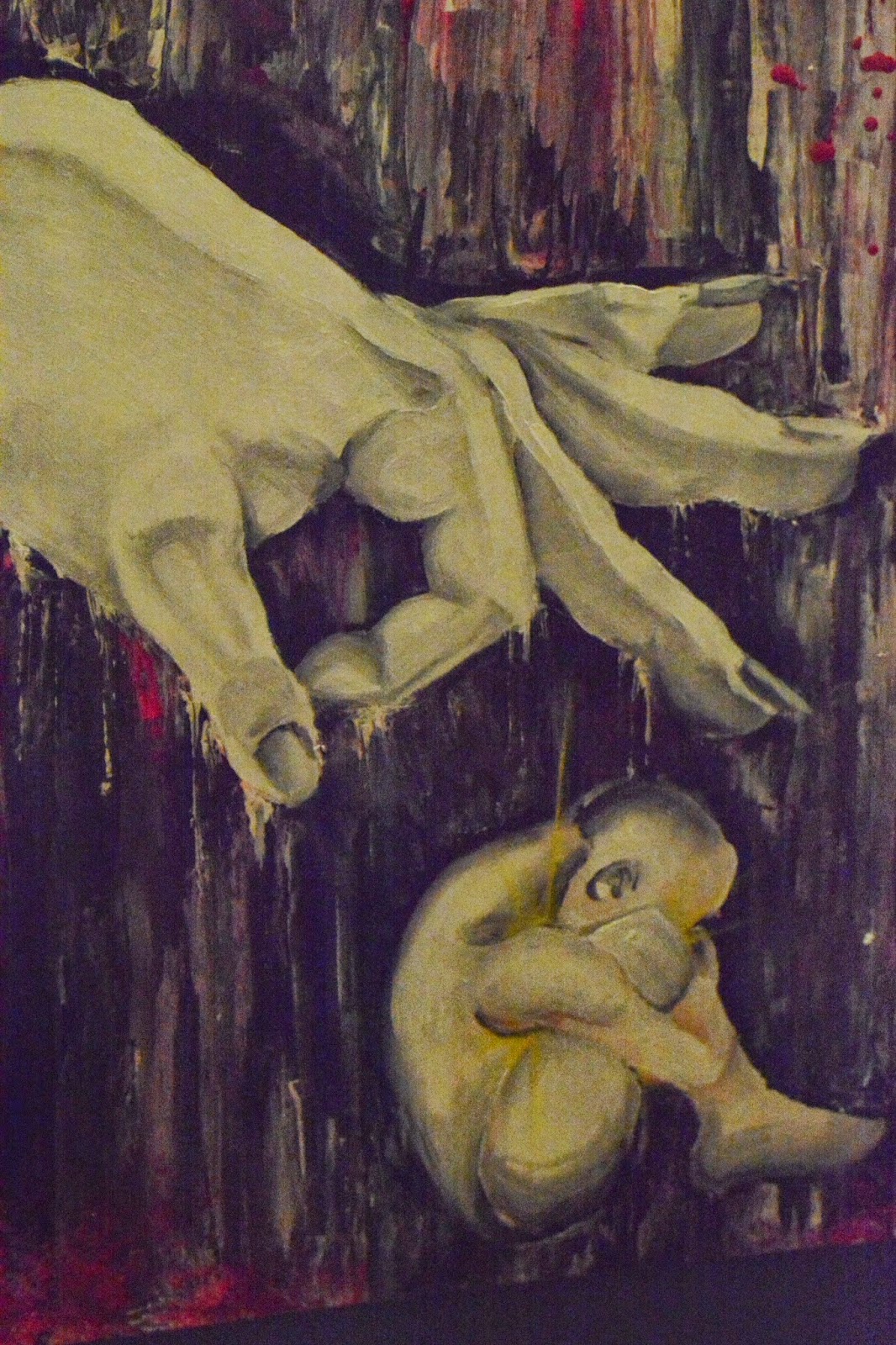 I thought about that as I looked at the art around me, all created by young people. 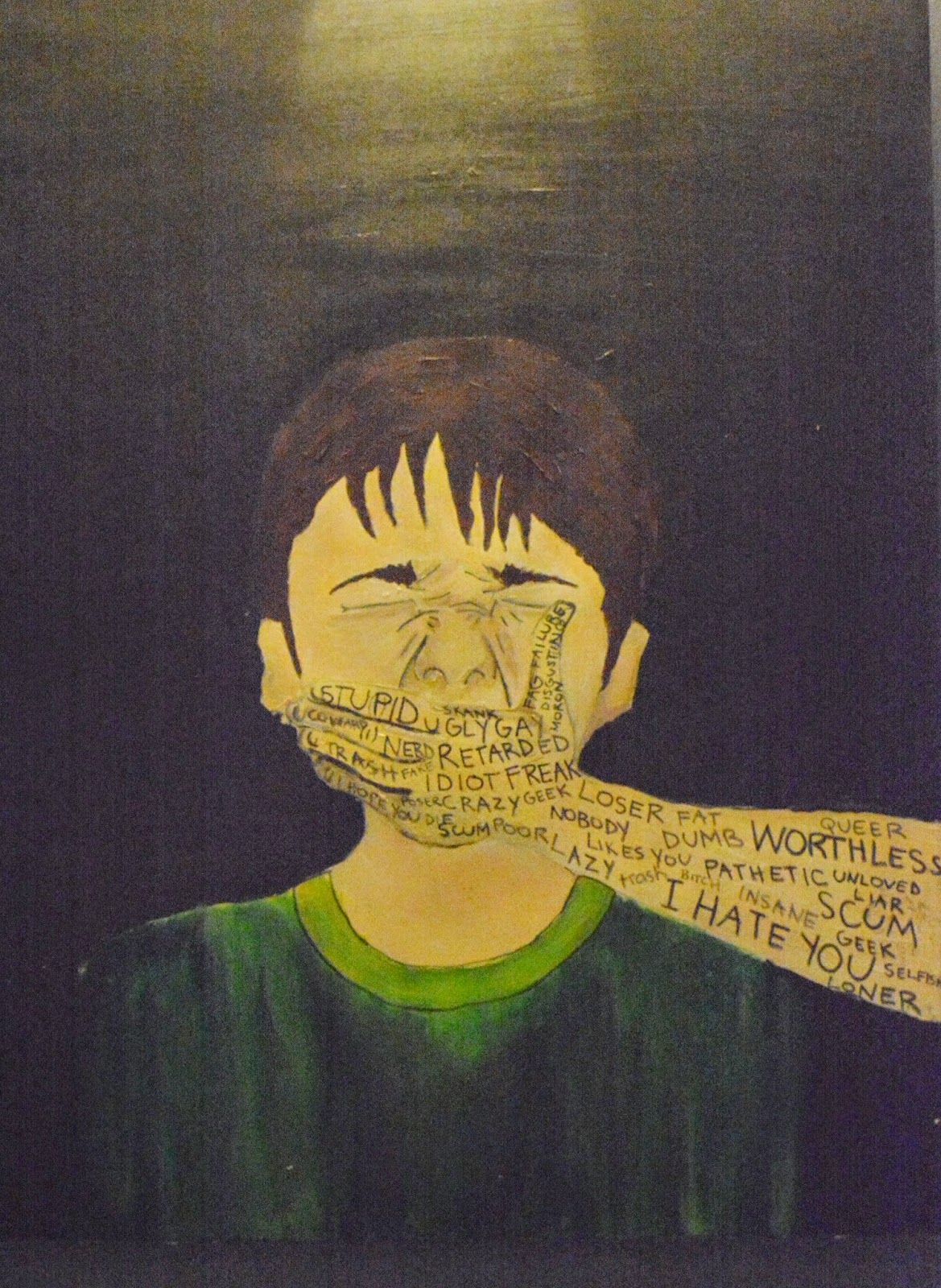 It's not a new problem.  There are many issues to consider in addressing bullying, but.. 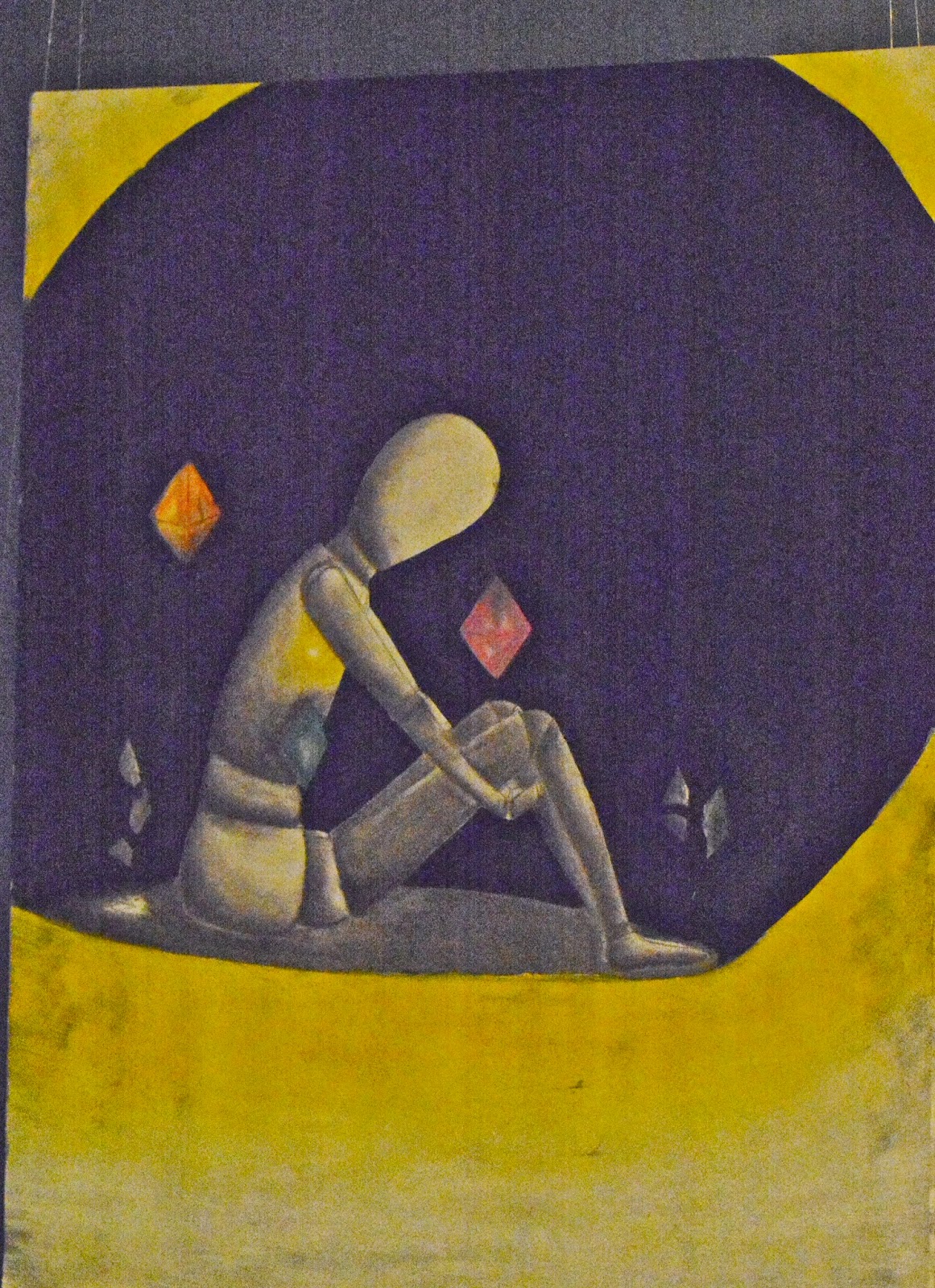 the one thing I know for sure is that I didn't stand up for a little boy in my Grade 1 class.  I don't think I called him names myself, but I didn't speak up, though I knew all of us were very wrong.  I still remember his name and I still recognize that I was afraid to speak up, because I didn't want to be bullied myself.  That boy was hounded for the rest of his school days.  I don't know what happened to him.  I hope he found some peace and happiness in his life. I'm quite sure the cruelty inflicted on him would have to have been life changing. 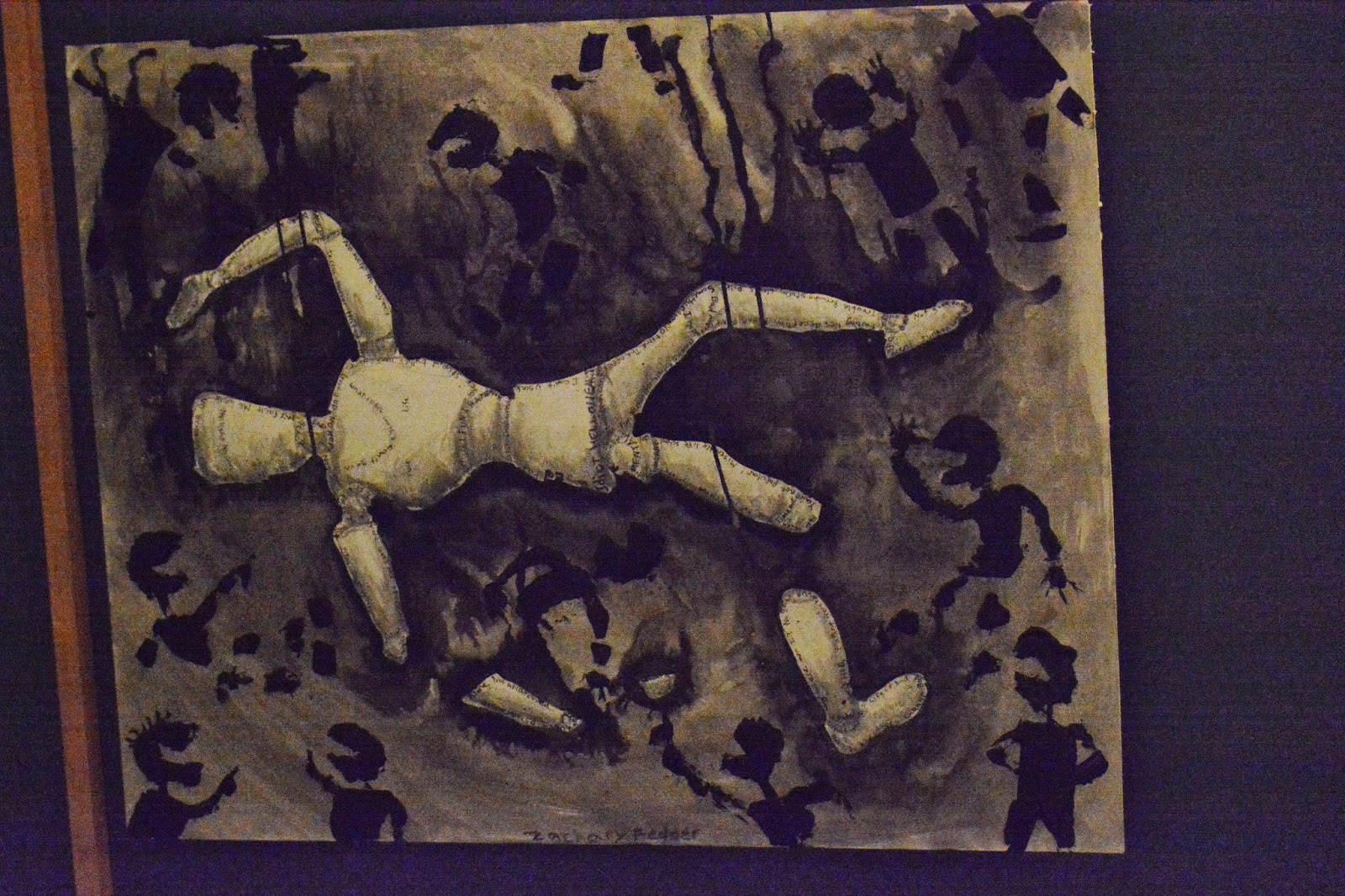 If you live near Vancouver, there are still a few performances left.  This is not your conventional opera but it has been lauded by reluctant attendees and opera-lovers alike. 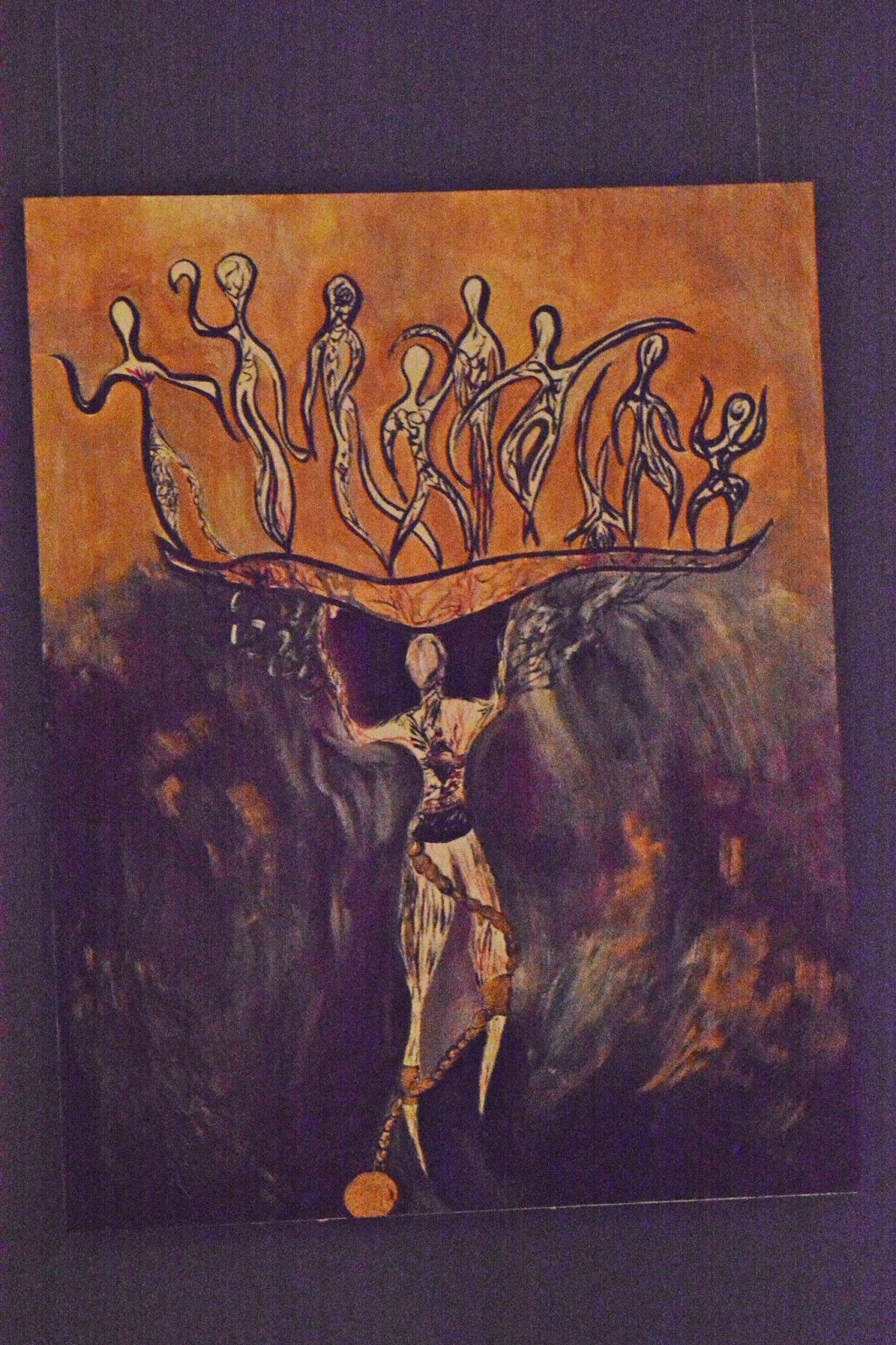 The orchestra, led by Leslie Dala, played with passion. 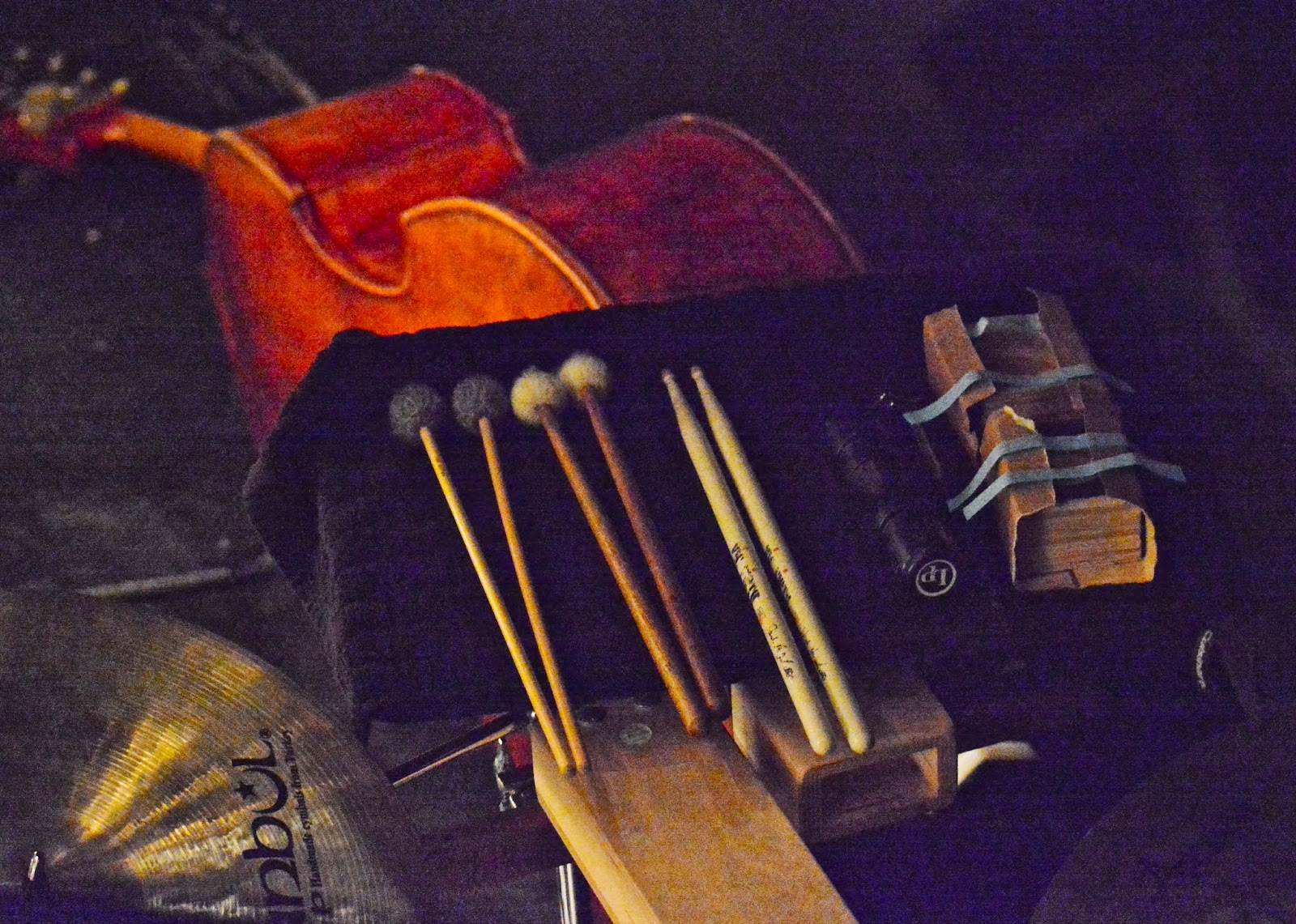 The sets were unique and though we weren't quite sure of the significance of these structures at each side of the stage (big lens so just giving you a taste), 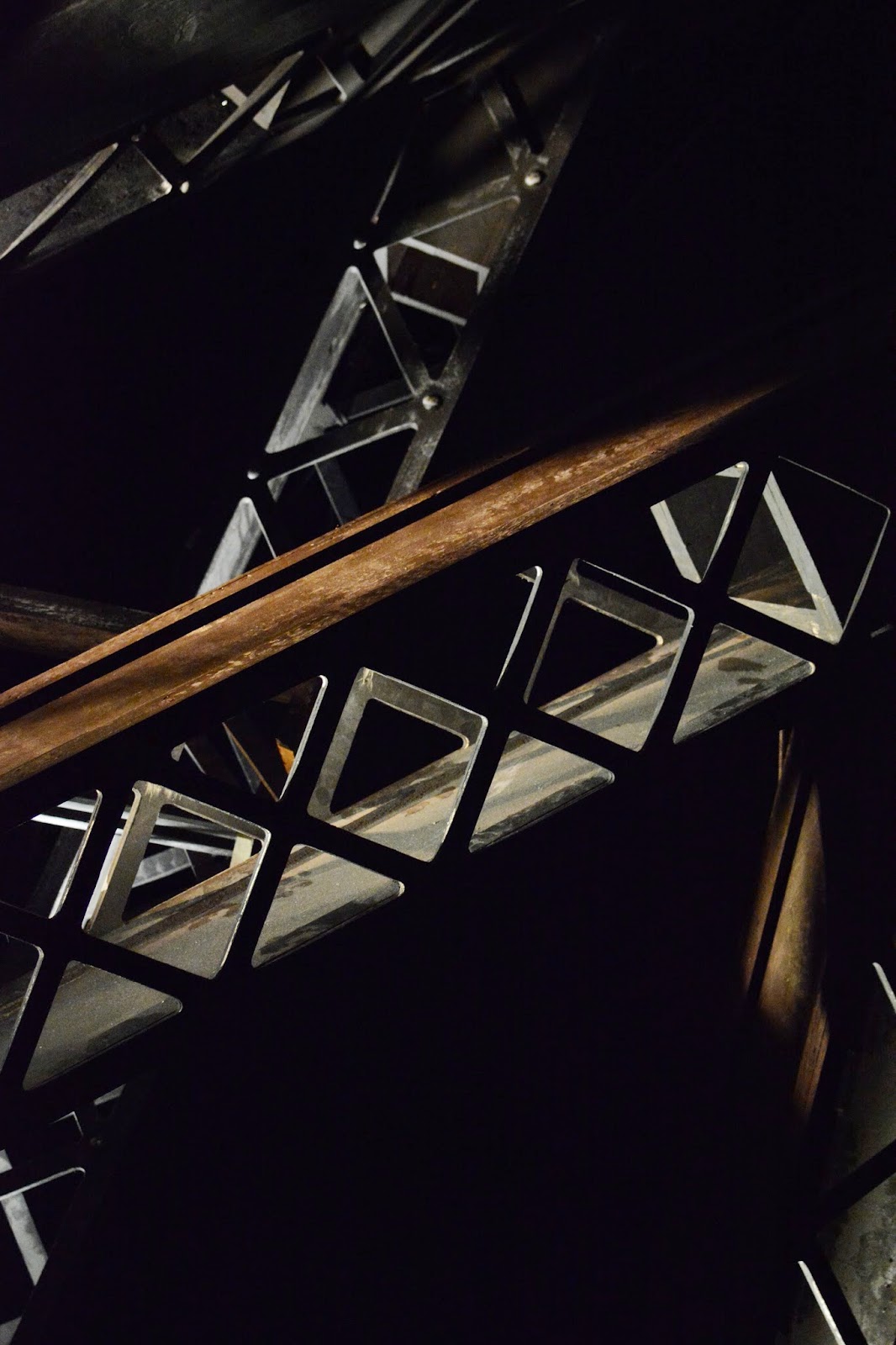 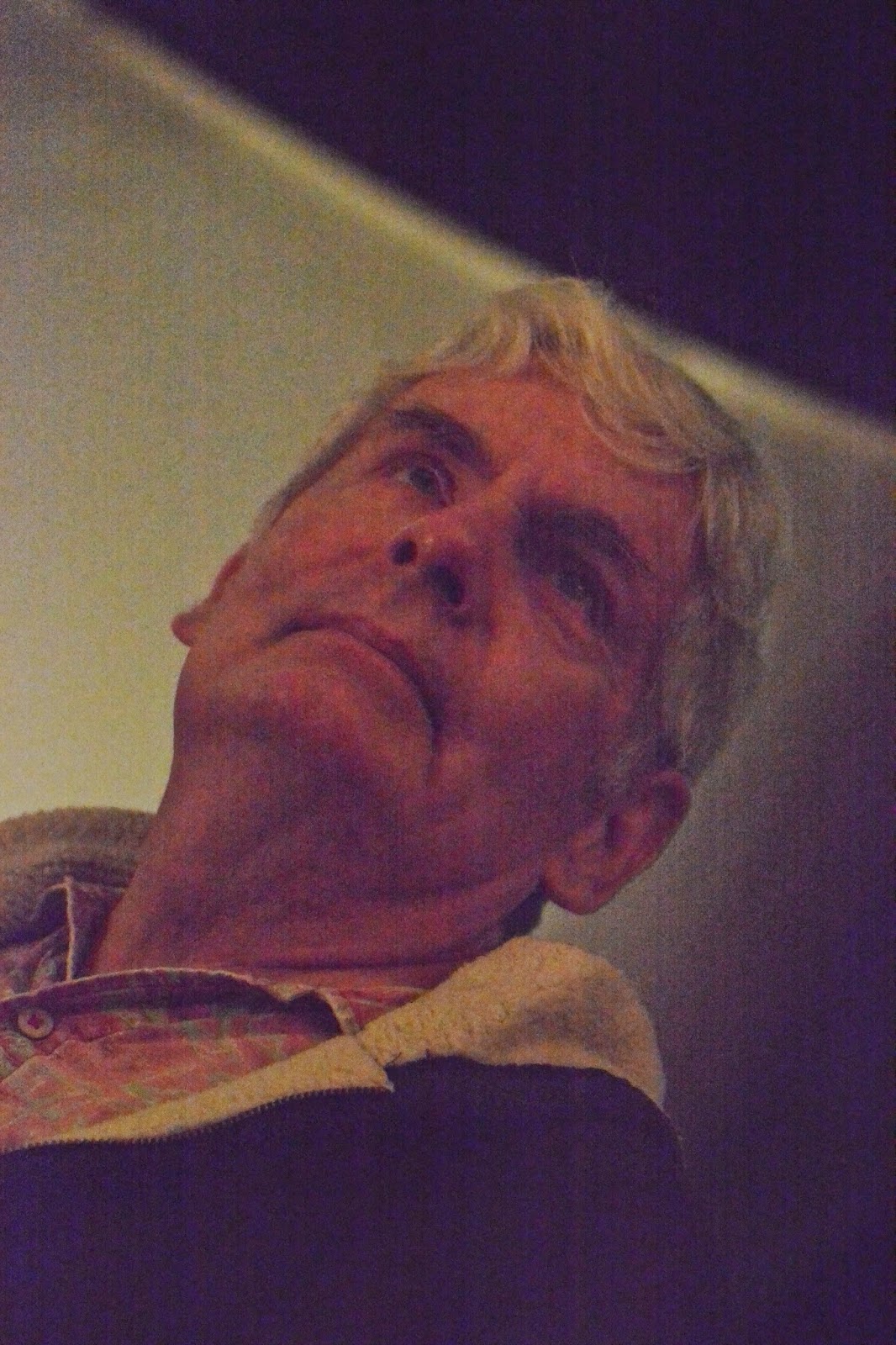 ..we agreed there was much to take in and much to admire as we looked around the room at intermission. 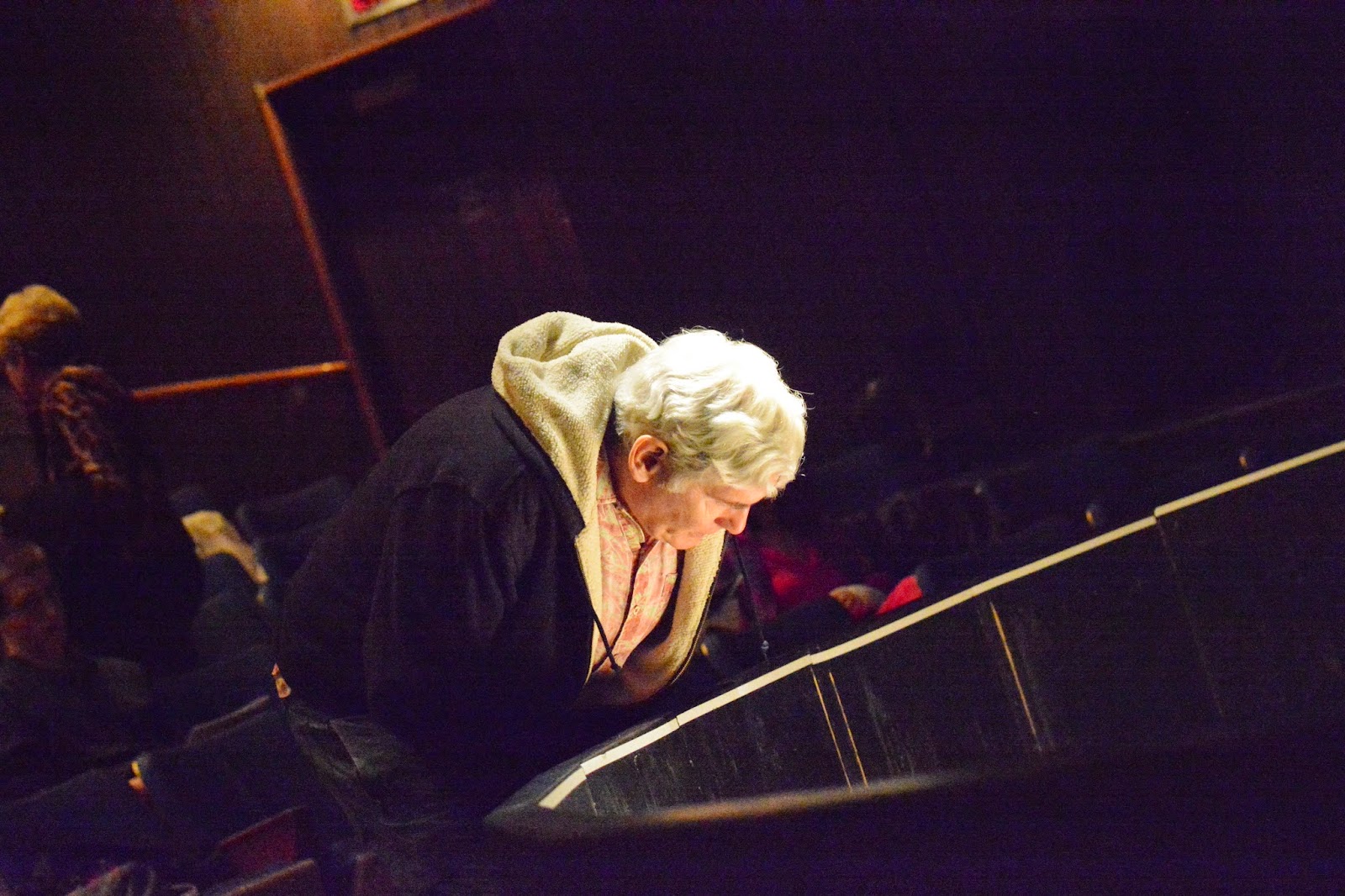 I was thrilled when we were granted permission to take photos during the curtain bows.  This shot was way over exposed, but the performance of Heather Molloy, as a young girl who showed the bullied boy around his new school, was strong, and for some reason, I think she may find something interesting or appealing about its overall affect. 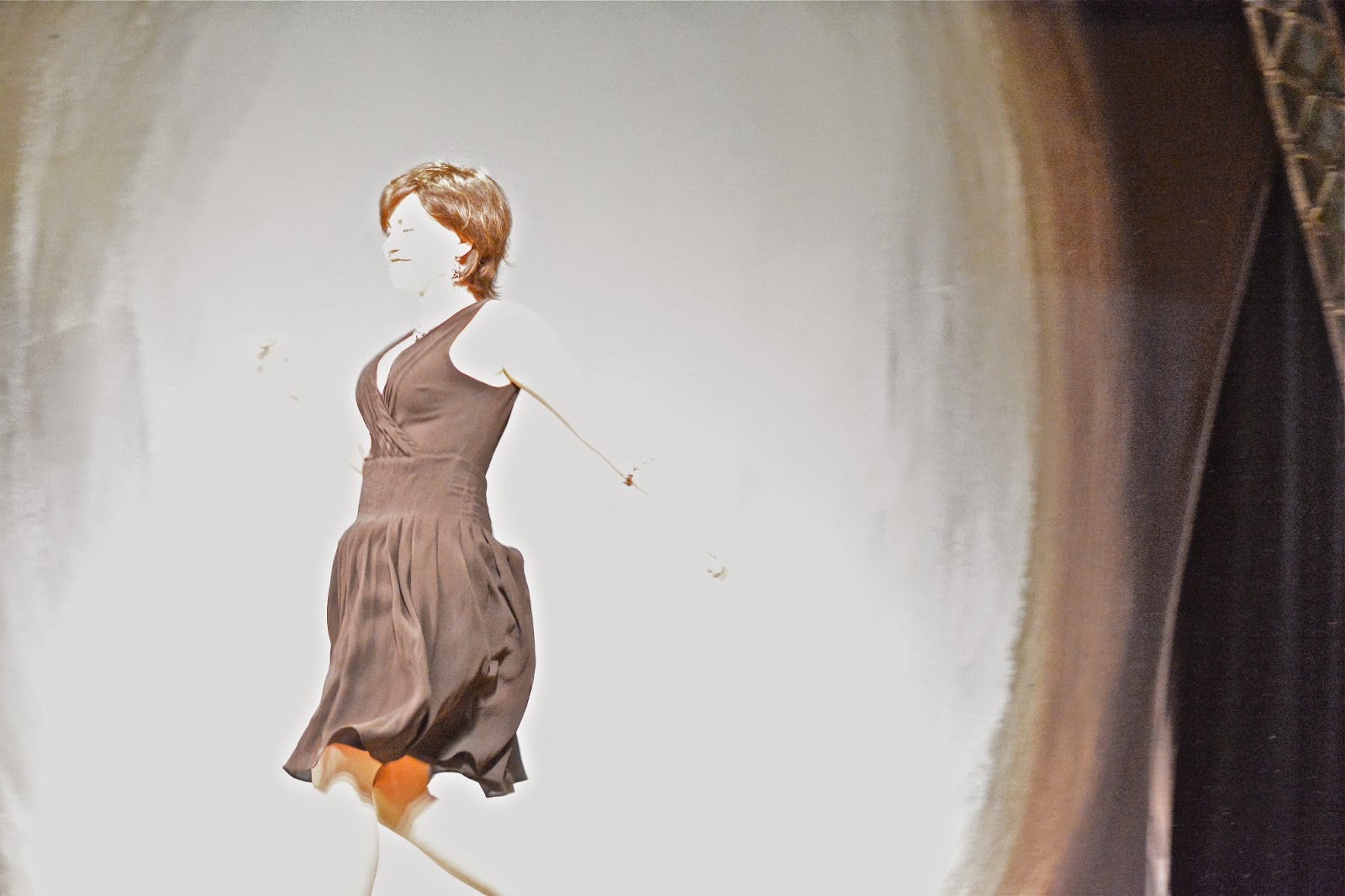 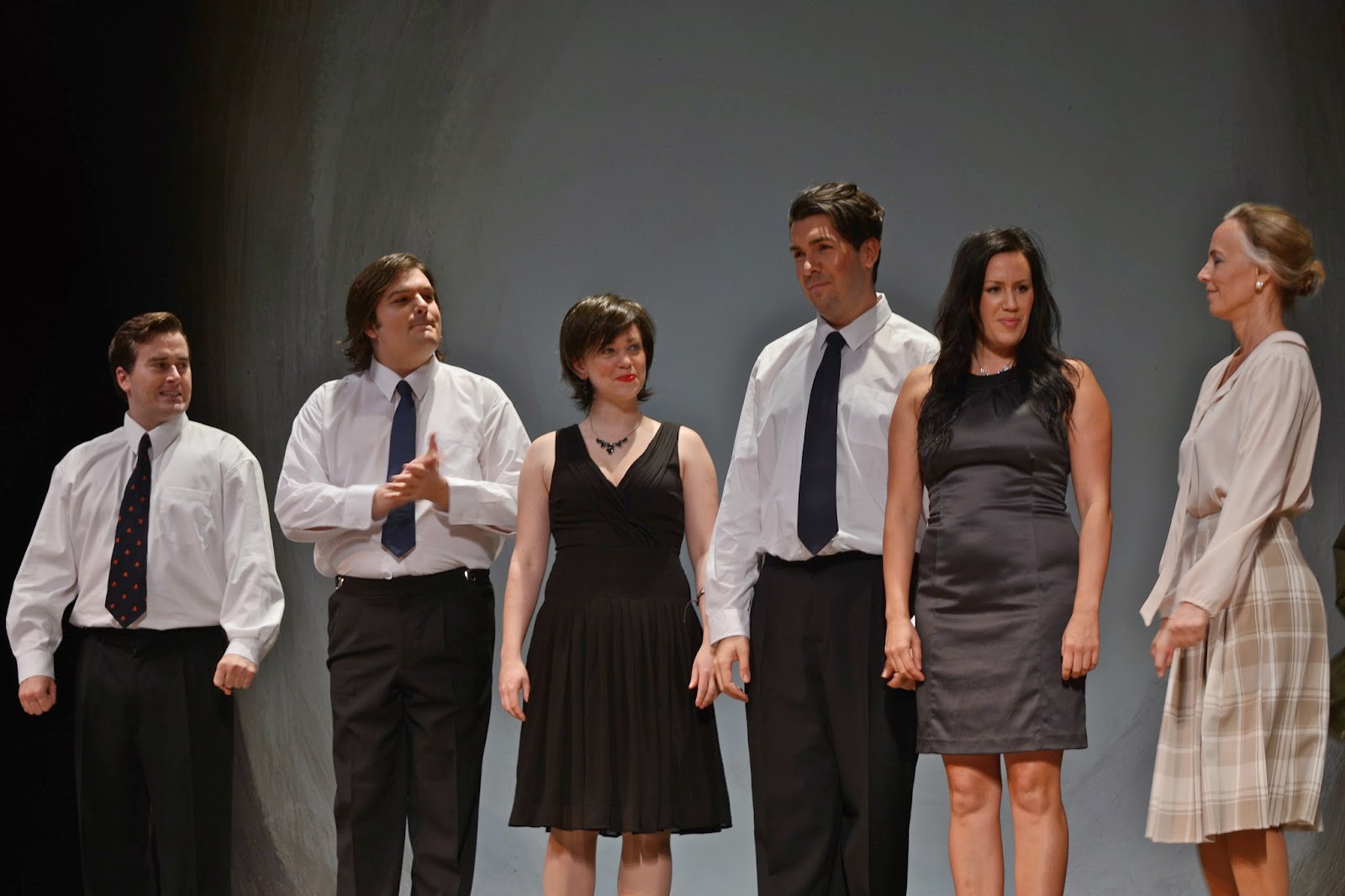 Just a note here that the promotional video seems to have popped into my post by surprise.  It's a good one, wealth worth viewing.  I won't name all of the singers, but what may come through in these photos.. 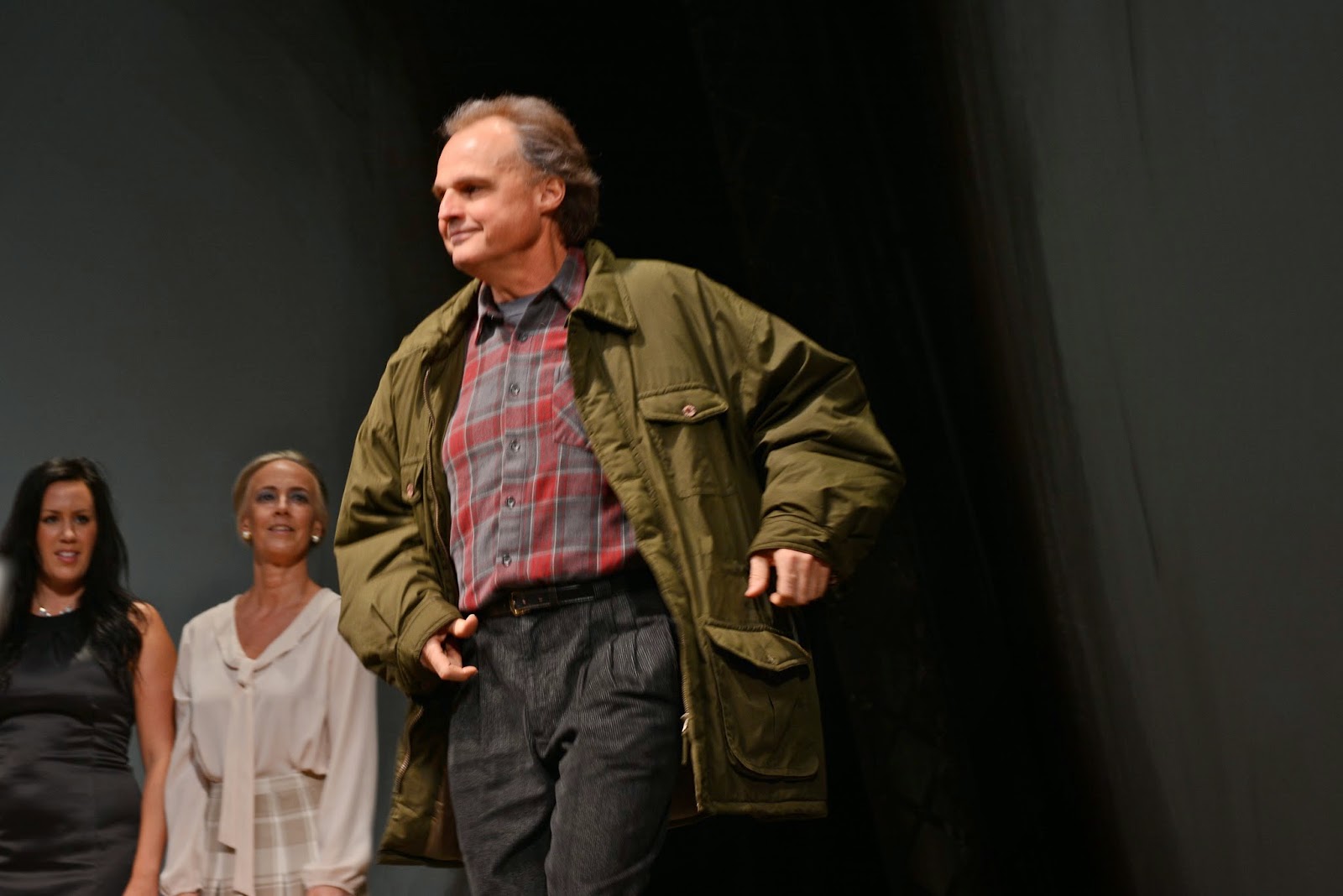 is the camaraderie that exists between every member of the production.  Shane's staunch supporter throughout all of his life was his grandmother.  Bill and I mused this morning that as painful as his life was, Shane's story could have come out even more tragically, had it not been for her love.  In the opera, the part is sung magnificently by Magan Latham. She is wearing the pink top.  I hung on her every note. 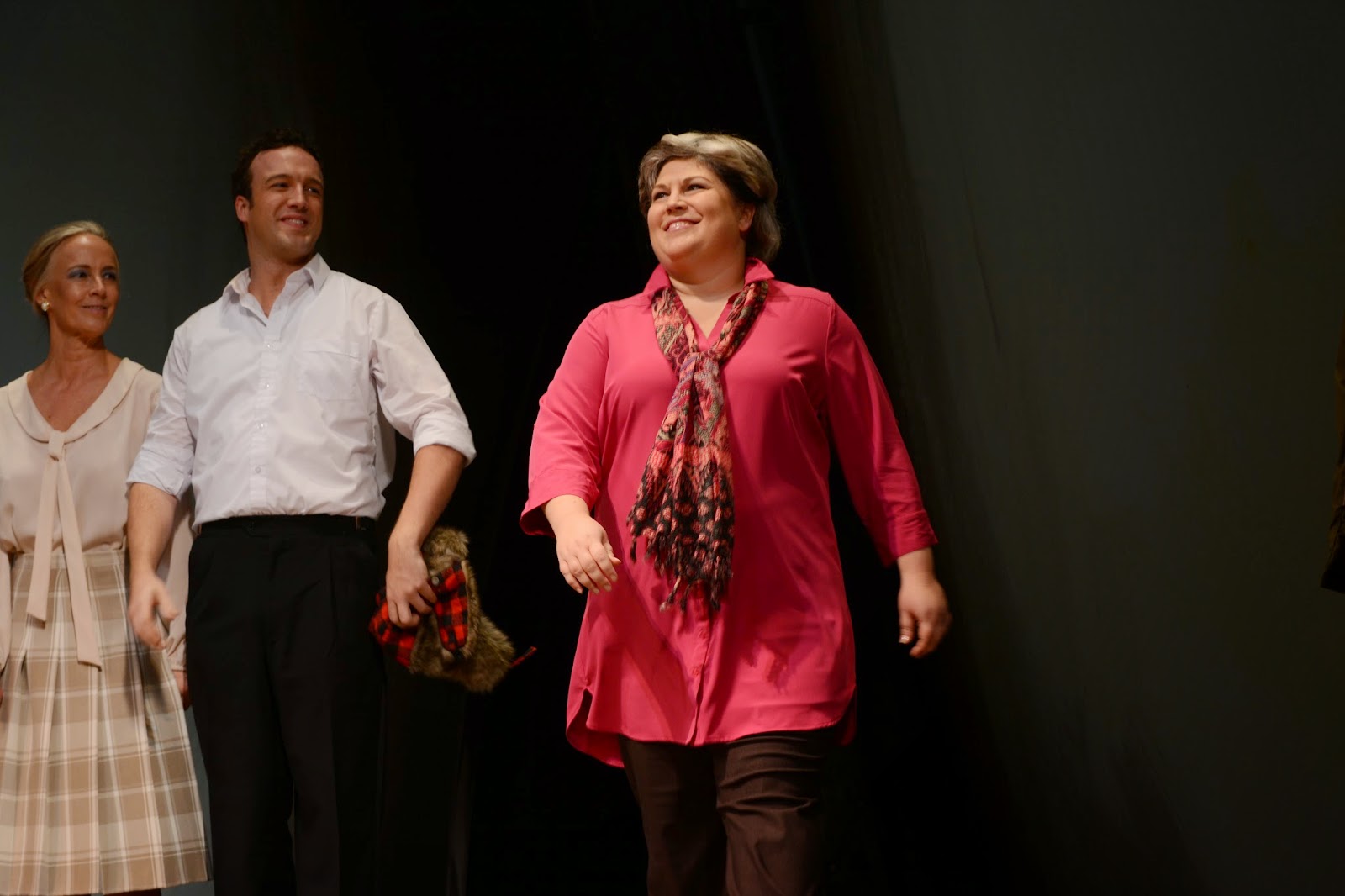 Every singer was strong, but we were especially happy to see Peter Alexander, as we have followed his singing career for some time. 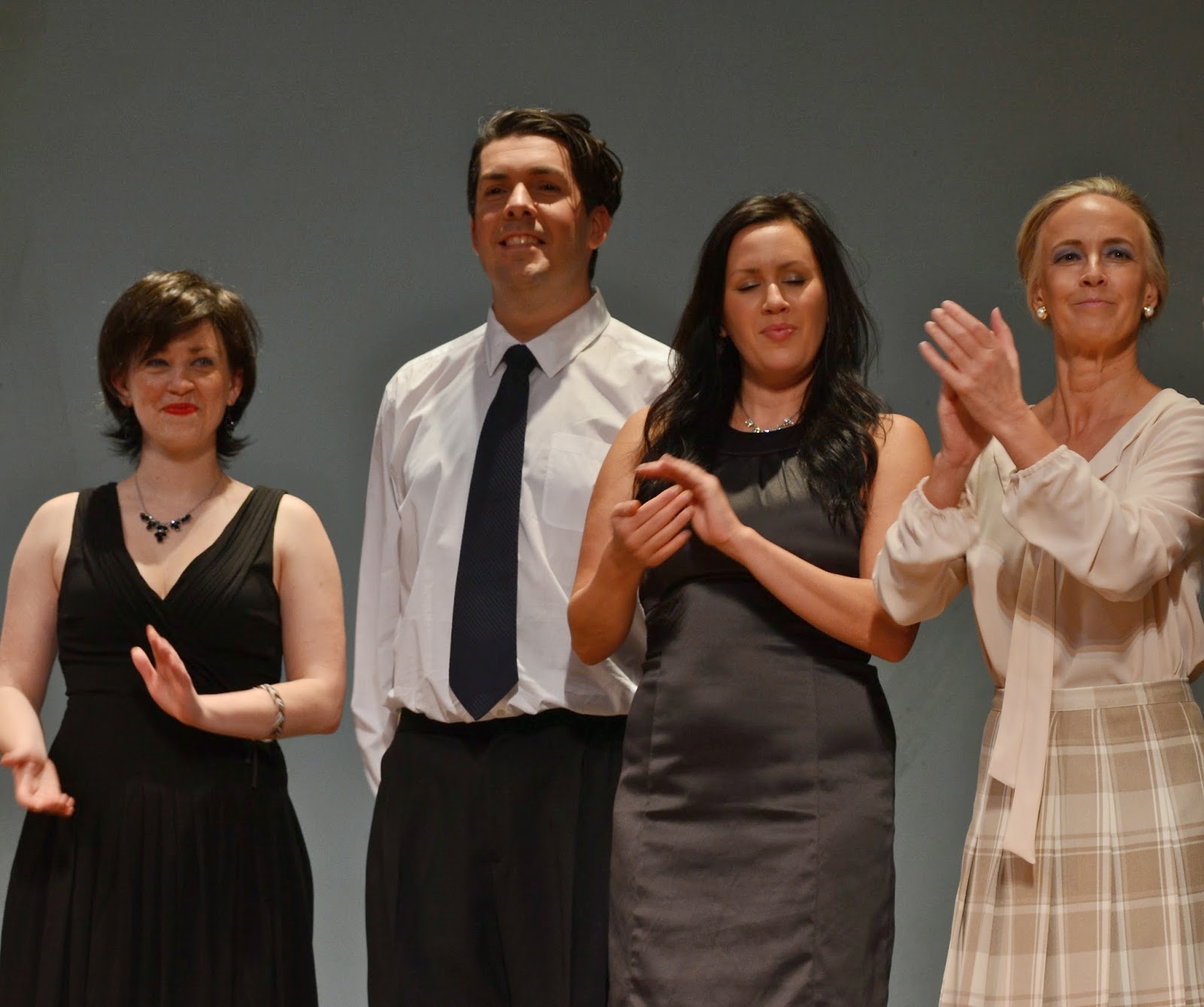 Sunny Shams (second from left) played the lead role as the bullied boy.  We felt his pain, in my case, I can honestly say, in the pit of my stomach. 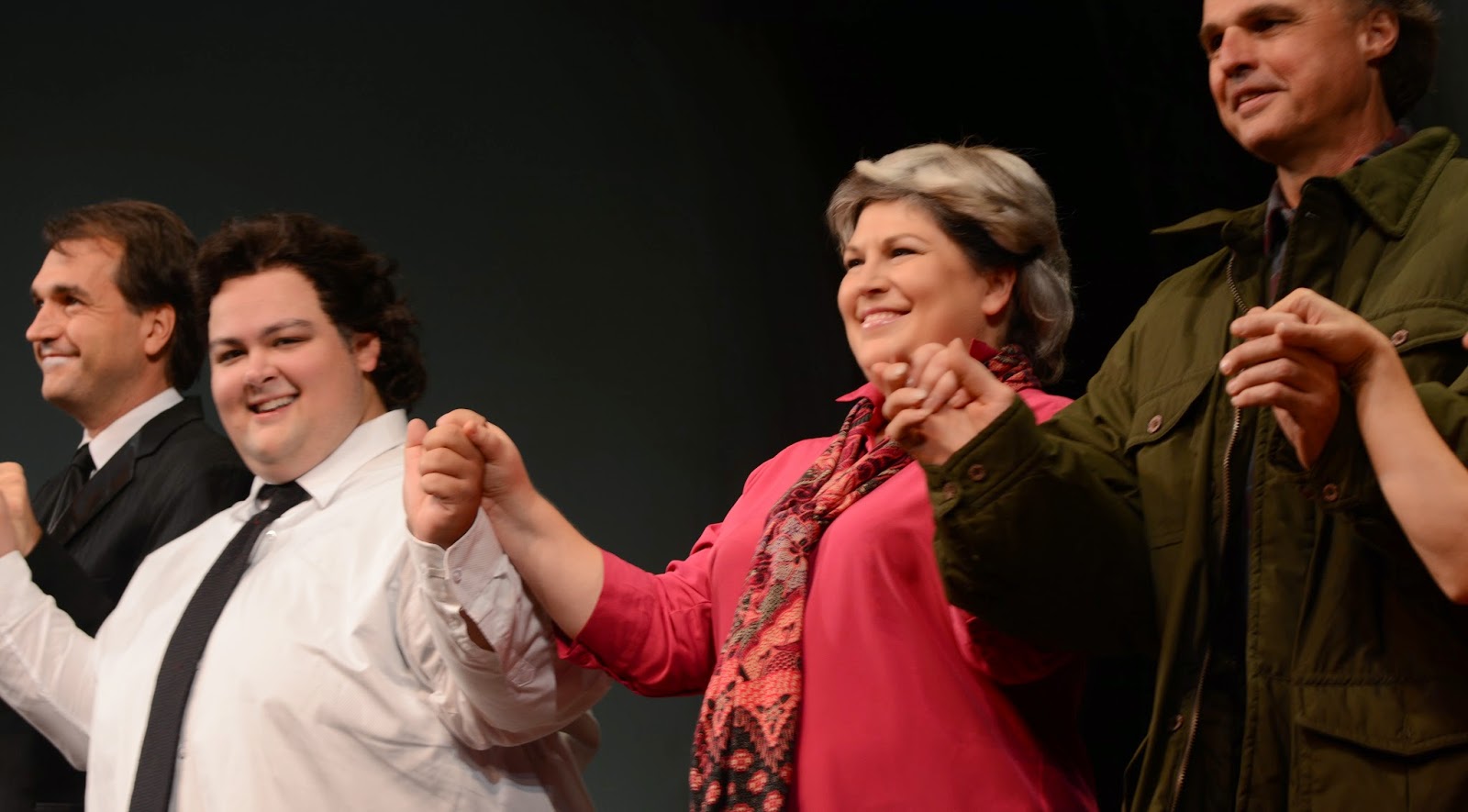 We stayed for the after-show talk as well, learning that many of the singers had experienced bullying in their own lives.  Frédérik Robert (at the left, in the role of student), Doug Tuck (director of marketing) and Mary Backun (clarinet in the orchestra) stayed afterwards for a question and answer session.  We stayed for that as well, and Bill commented afterwards that he had learned a lot. 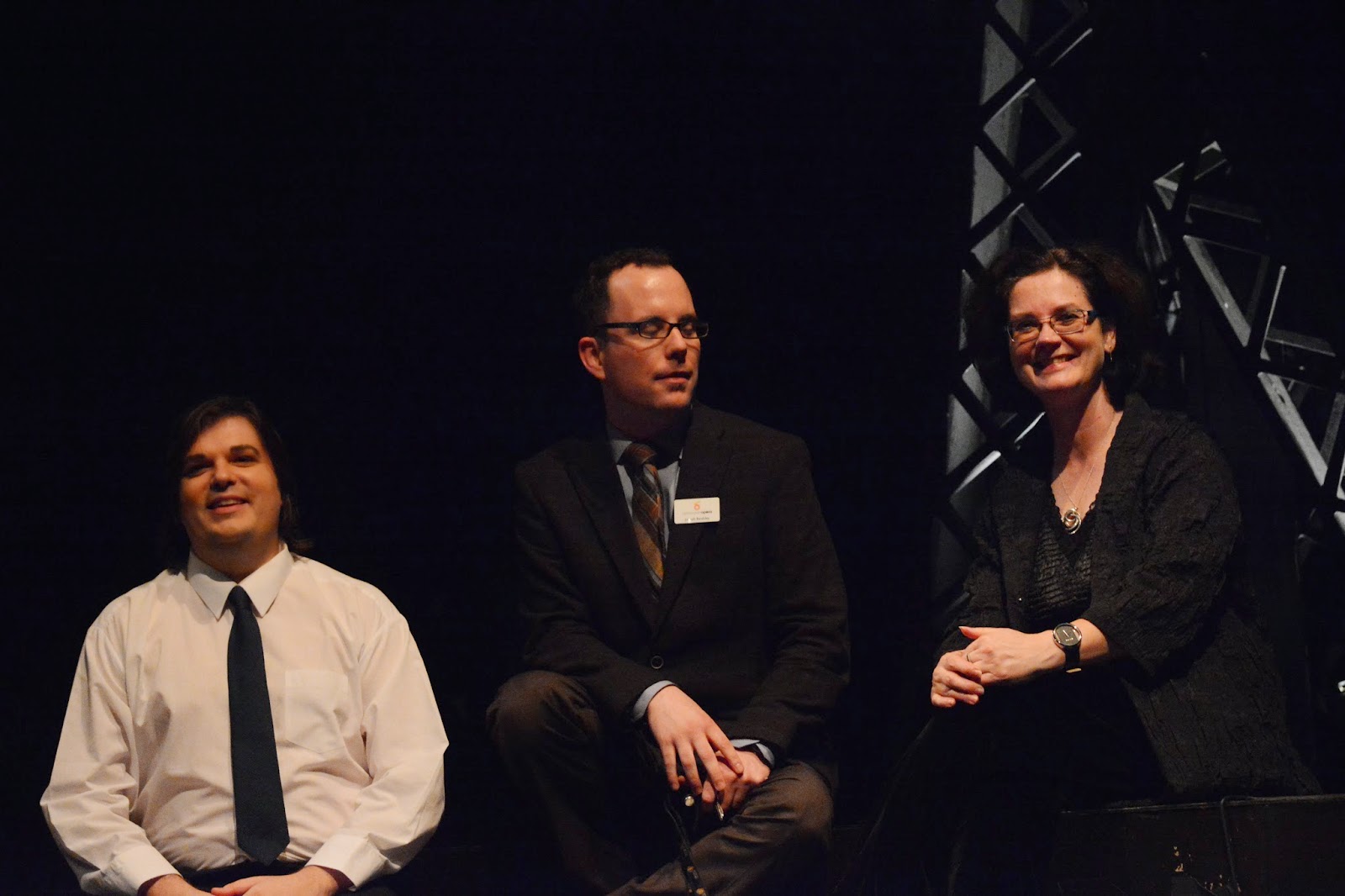 Here, Frédérik shared that he burst into tears during one rehearsal when a particular scene forced him to confront a long suppressed memory in his own life.  Doug told us the opera will go into many high schools across the province (reduced to four singers and very simple staging.  I applaud the courage of Vancouver Opera for taking a huge risk in producing a show like no other in their past.  I hope it works to make even one tiny part of the world a kinder place.  I  believe it will!  Thank you so very much for stopping by to listen to the stories that crossed my world yesterday.  Have a safe and happy start to your weekend. 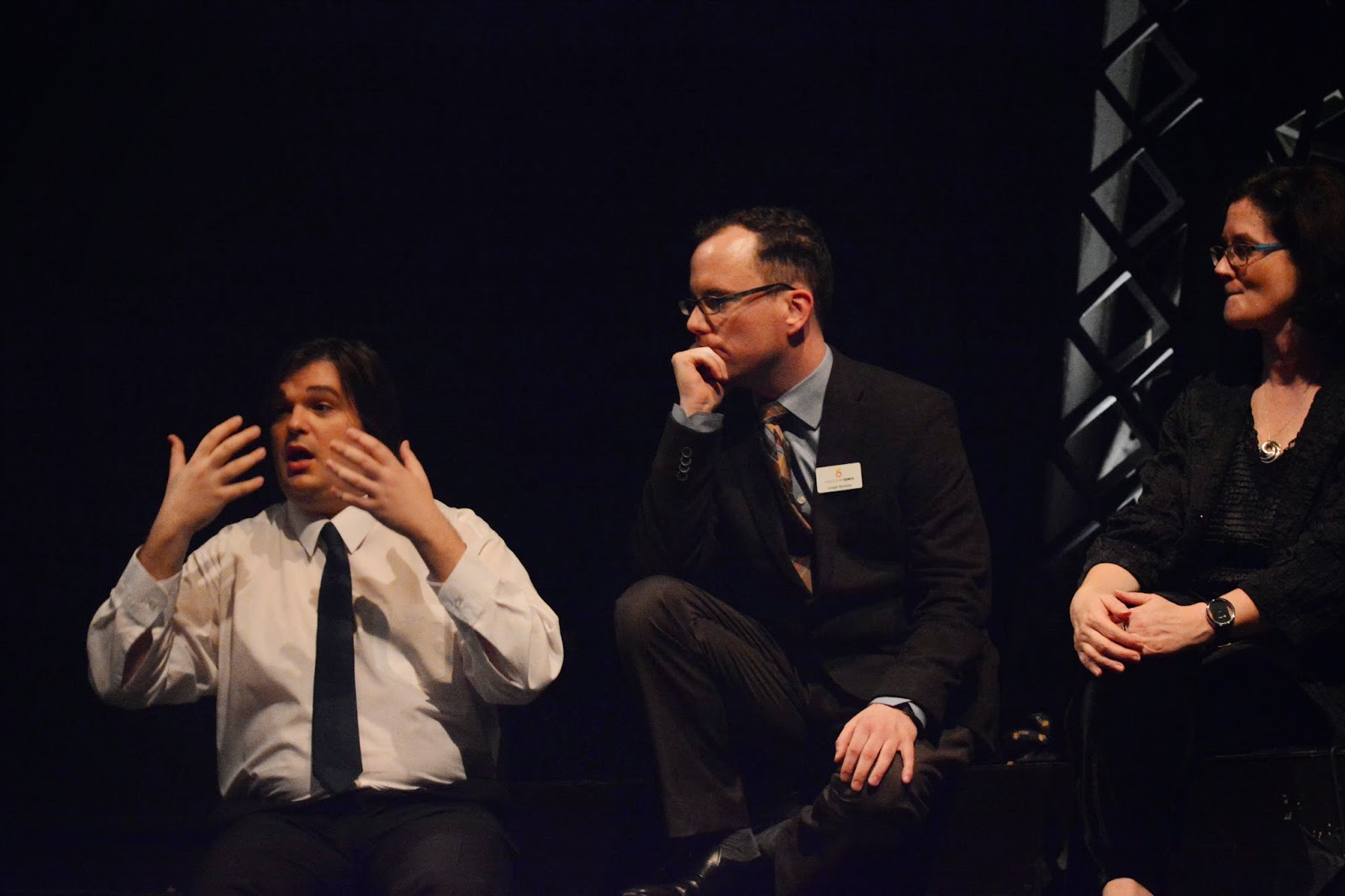