It looks like the rain will stay with us today and photography was rather limited yesterday so there are just a few photos this morning to post to Elaine's Saturday's Critters.  Many thanks to her for hosting.  If you've never visited her blog, I highly recommend it.

We tried last night to interest Black Jack in our latest read, Carry on Jeeves (thank you so much to Bill's sister..  we are enjoying it a lot), but for the most part, she preferred to cuddle and listen rather than read along. 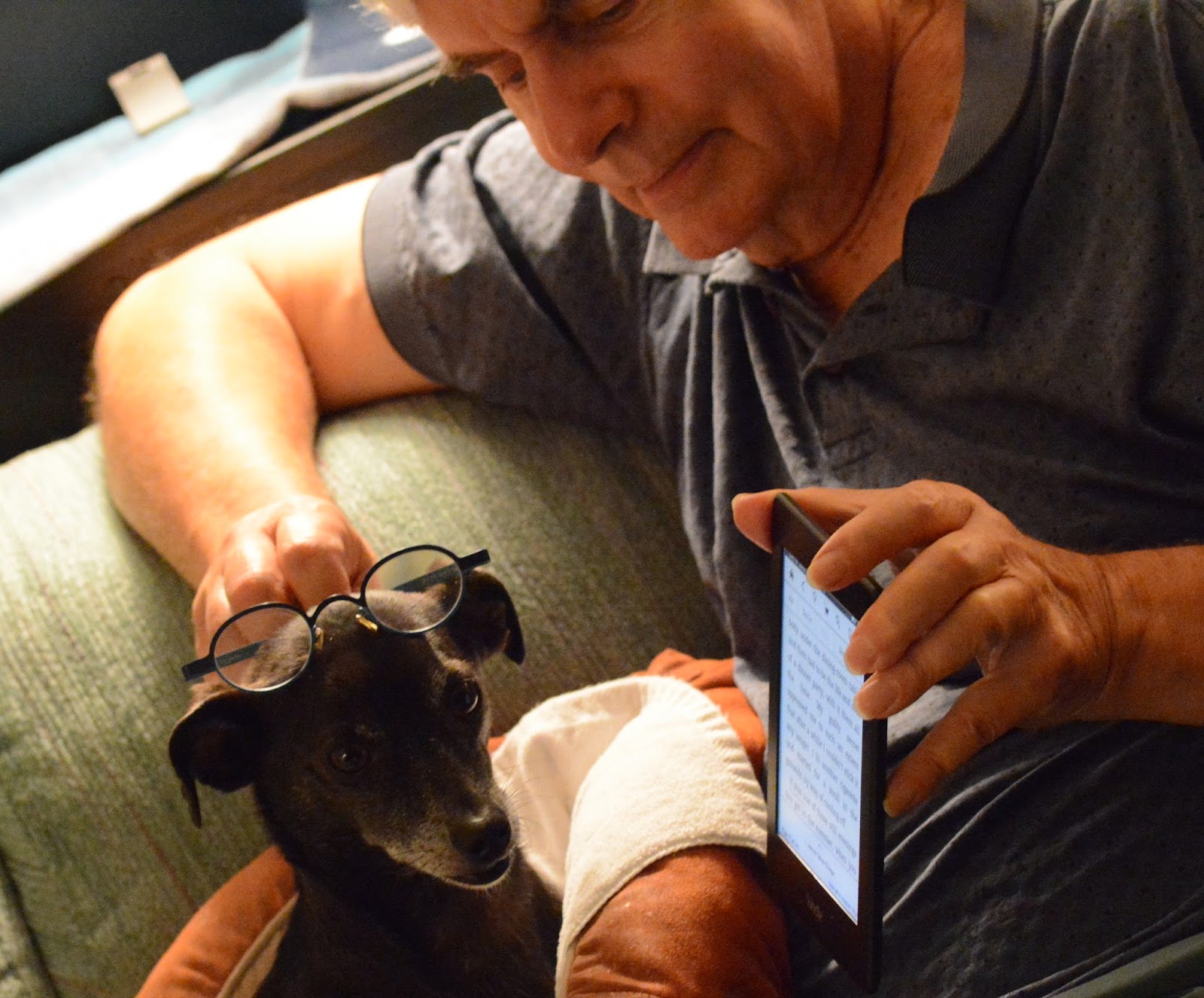 Bill gave her a different pair of glasses (because lending her mine was making the issue of whether or not we were in focus mostly a mystery :)  and she did become a bit more engaged, though she asked if he would do a better job of cleaning them next time. 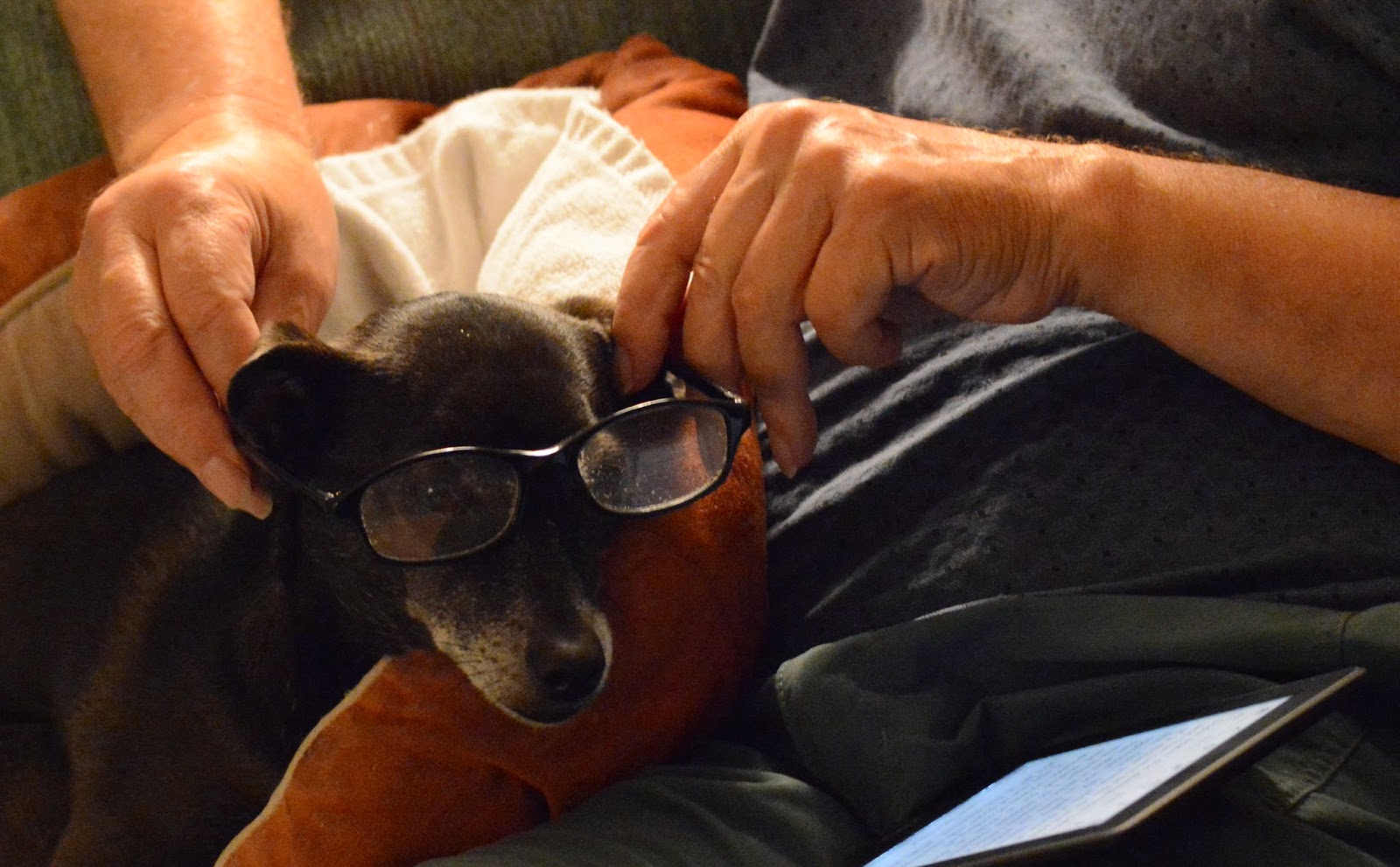 This morning, I walked with Black Jack through David Lam Park and down to the edge of False Creek. There is a spot there with cover.  Two crows hopped along beside us, hoping for handouts, but I didn't succumb to the temptation to feed them.  One sat on the railing in front of us, and when I turned around, 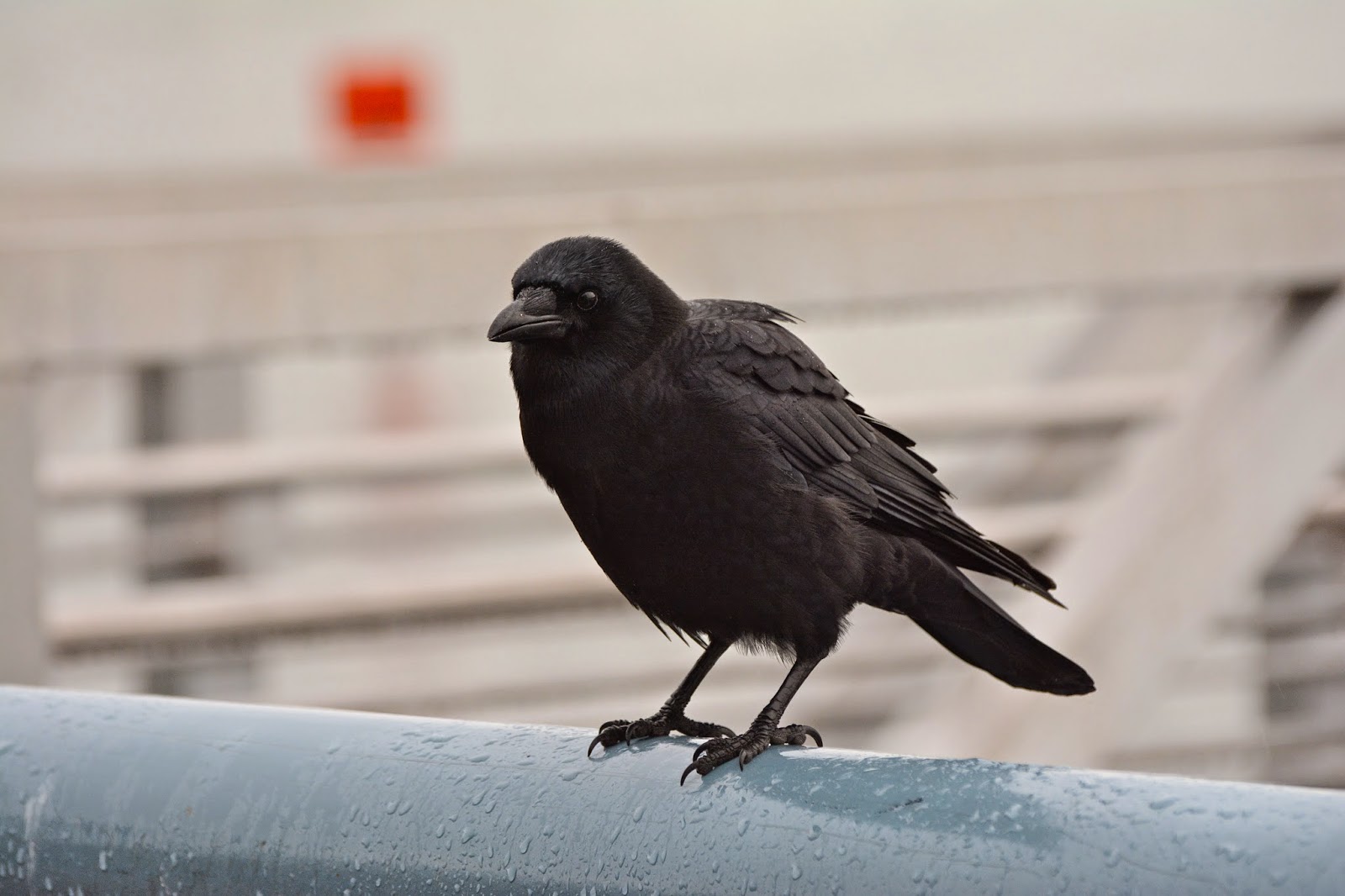 the other was sitting on a park bench behind us.  You could say we were surrounded. 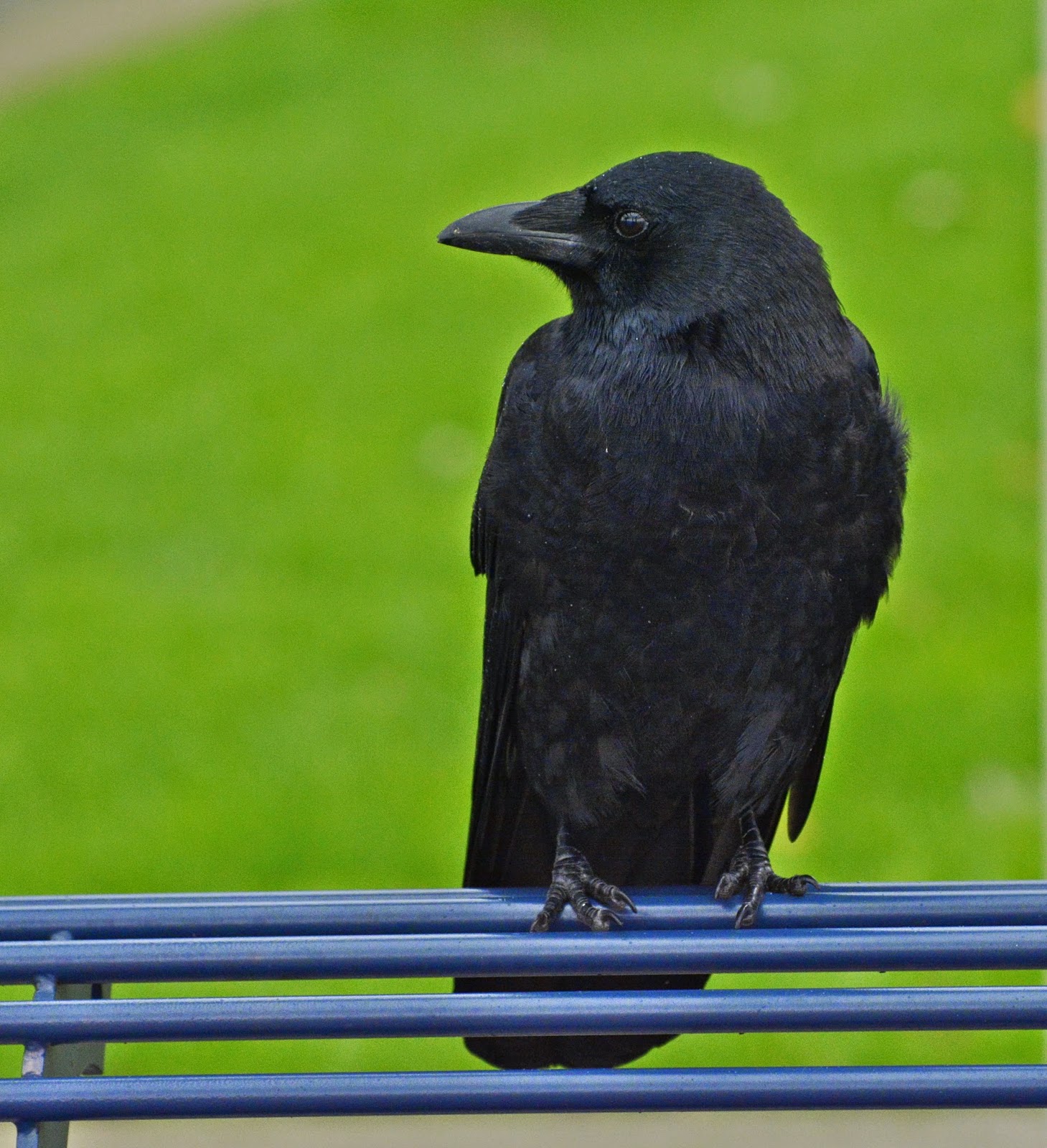 Most people out and about seemed to hurry along with their dogs, just wanting to get the business at hand accomplished so they could return to the warmth of their cozy homes.  I spotted this pair on the other side of the creek. 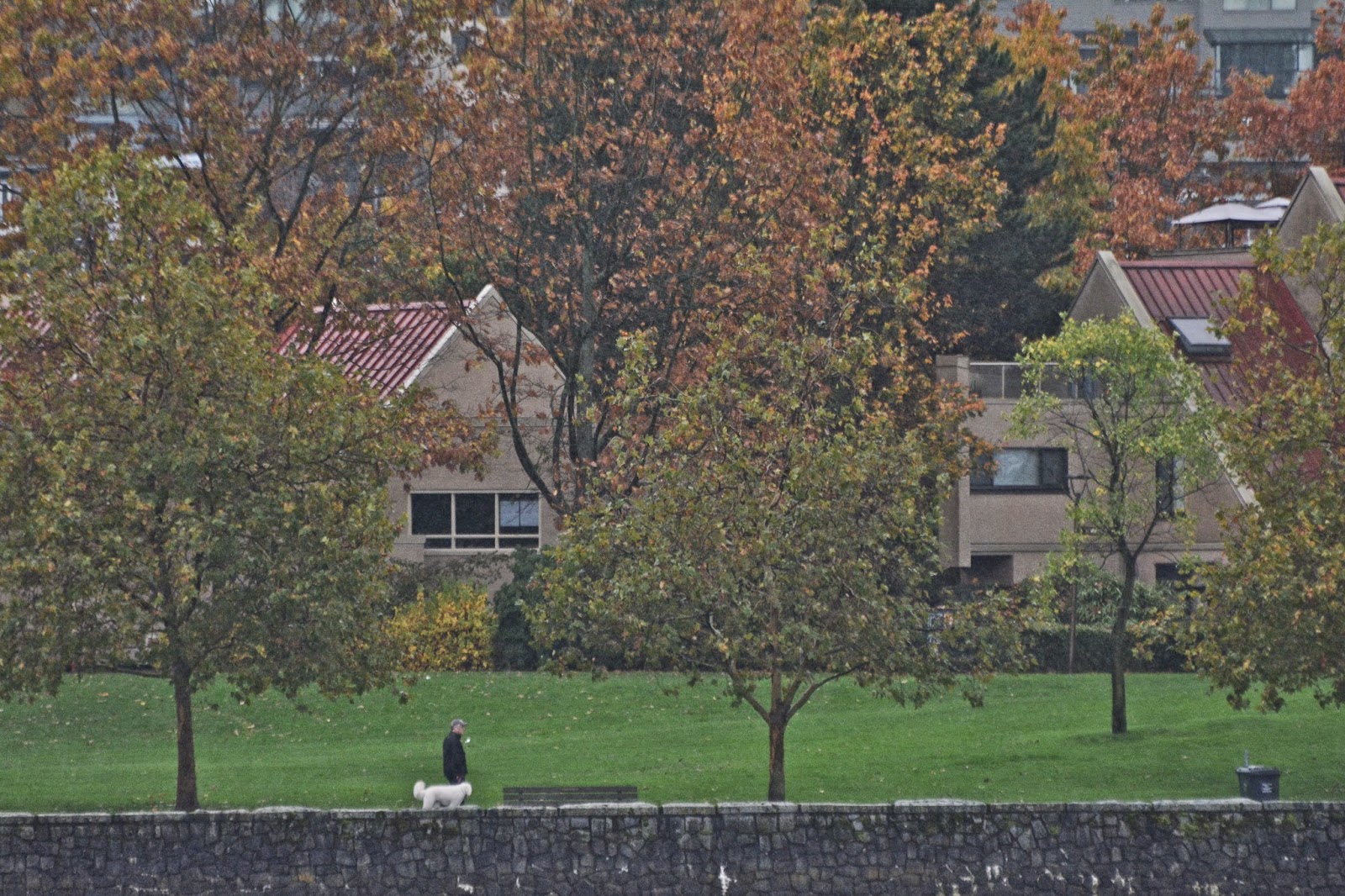 There were a few little birds flitting about in the grass behind the railing, but they were too quick for me and my camera to catch. 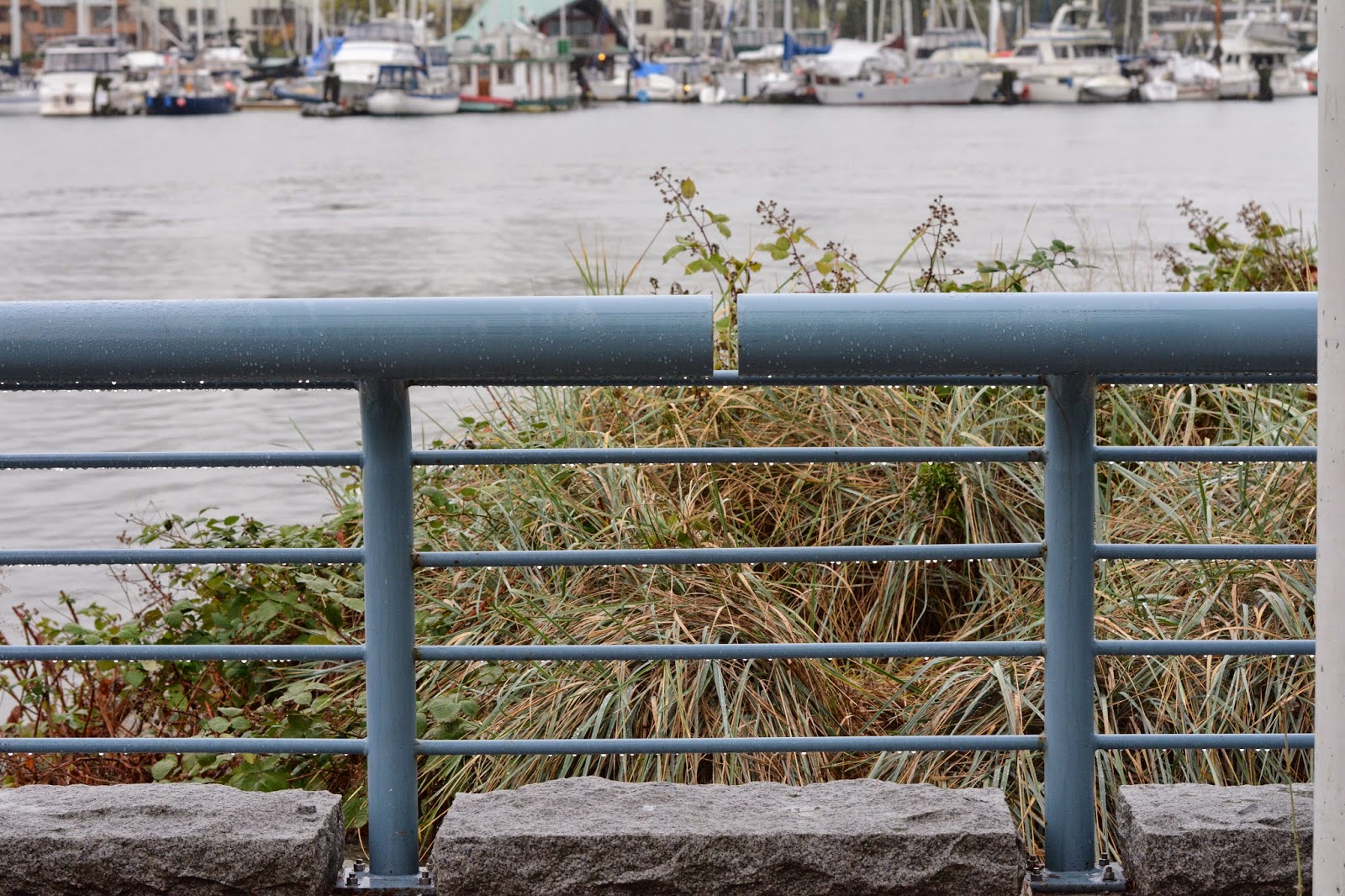 I thought this crow was finally giving up, but in fact the two of them stuck with us and even followed us home. 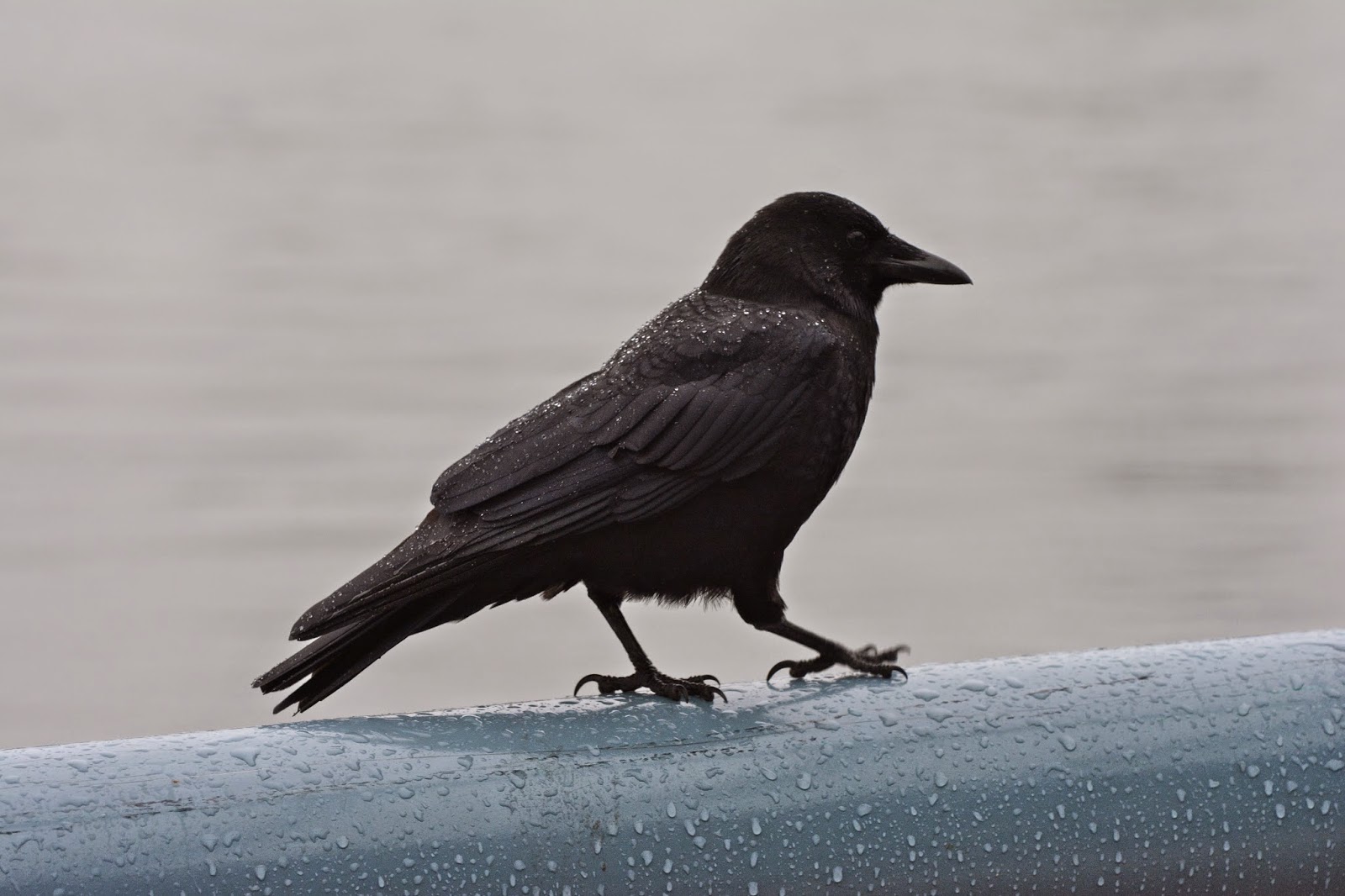 My seagull friend, Tupper, hasn't been seen for almost two weeks, the longest absence so far.  I miss her.  This one flew over the boats, looking perhaps for a tasty fish. 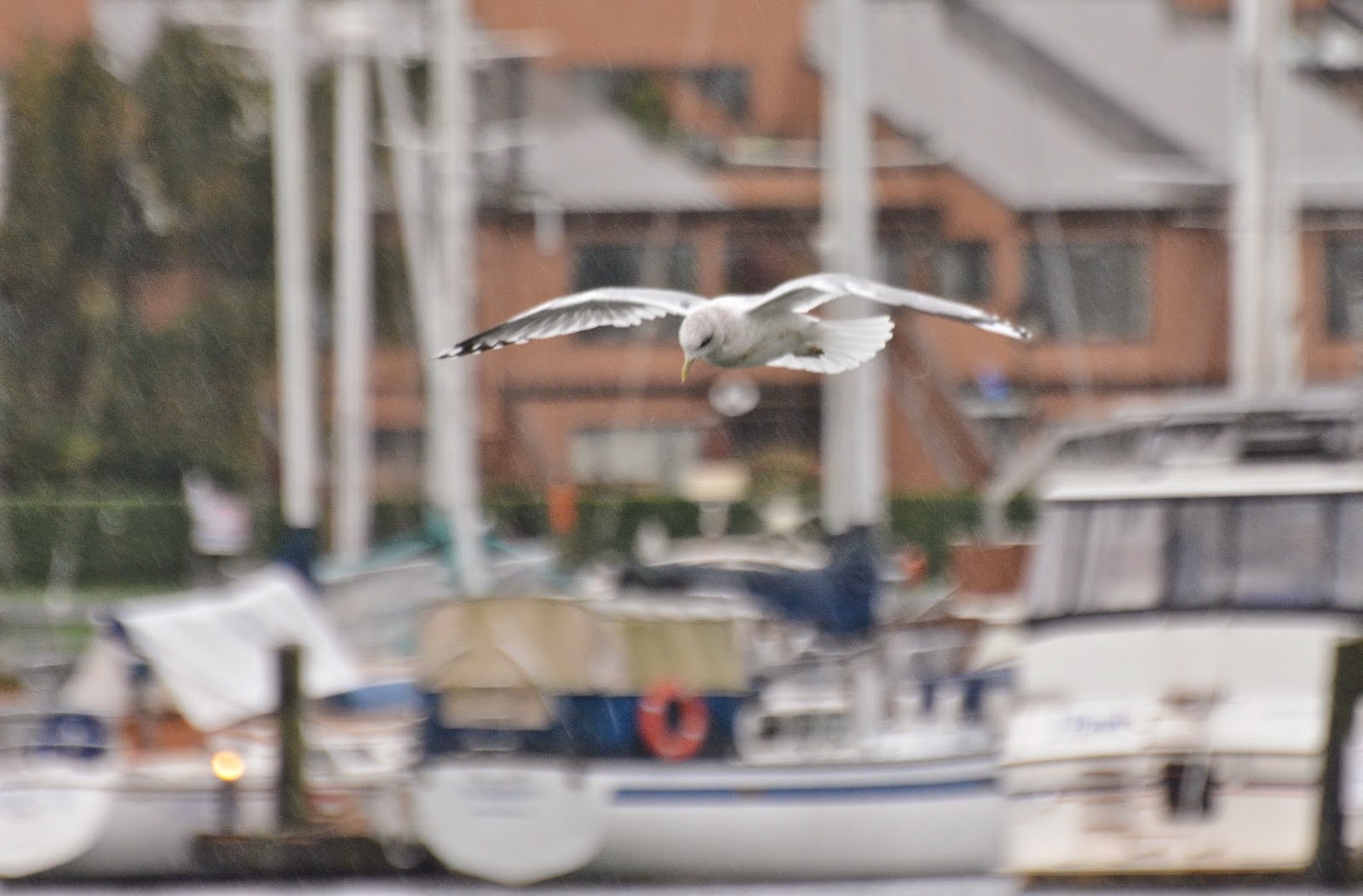 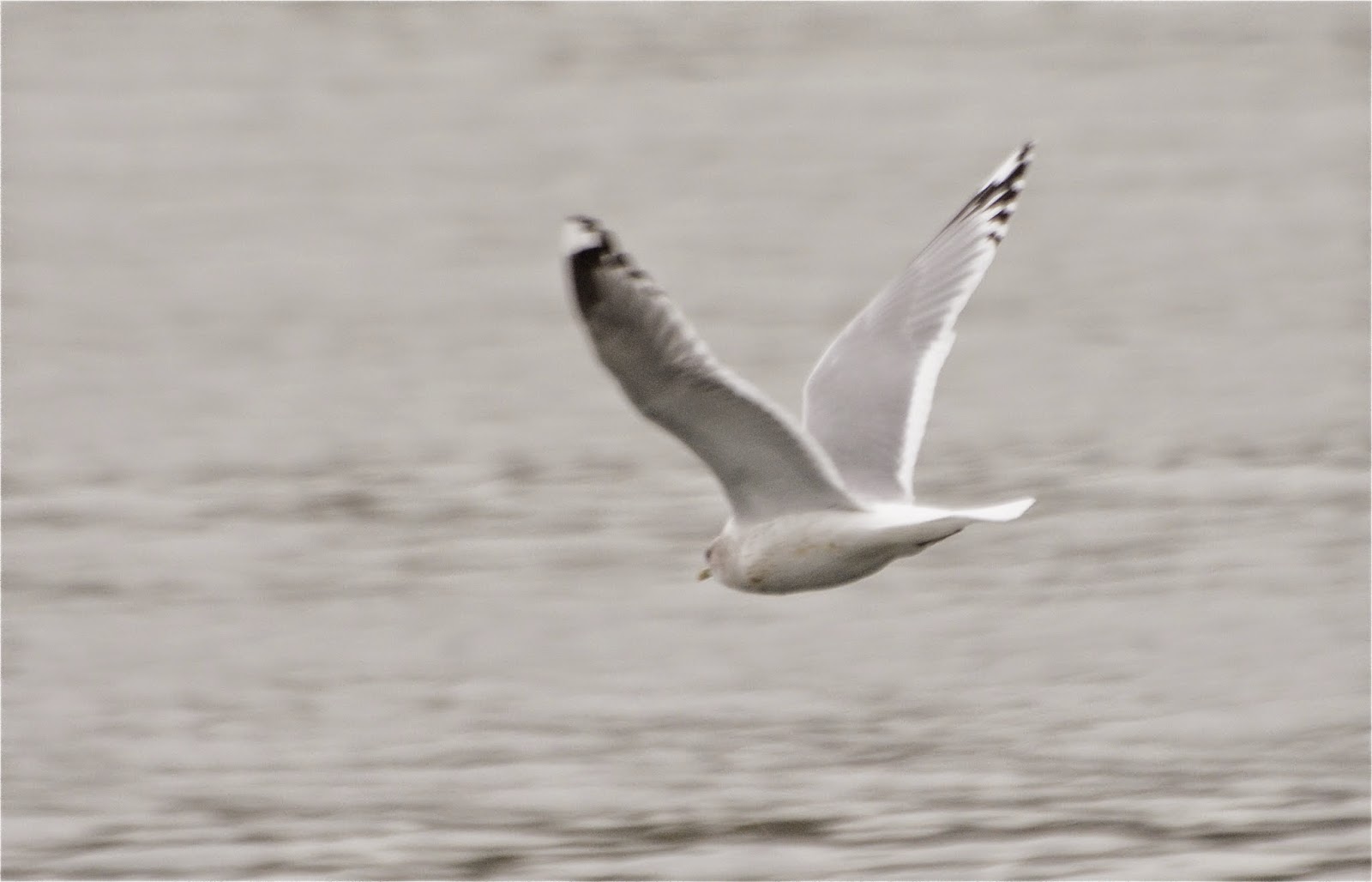 Black Jack watched both the crows and the seagulls with little interest.  She was more enthusiastic about the treats in my pocket, but she has been under the weather for a couple of days.  I fasted her for 24 hours after a seeming stomach bug hit her.  All seemed well last night but she is quite restless this morning.  I'm hoping it is something small that will soon resolve itself. 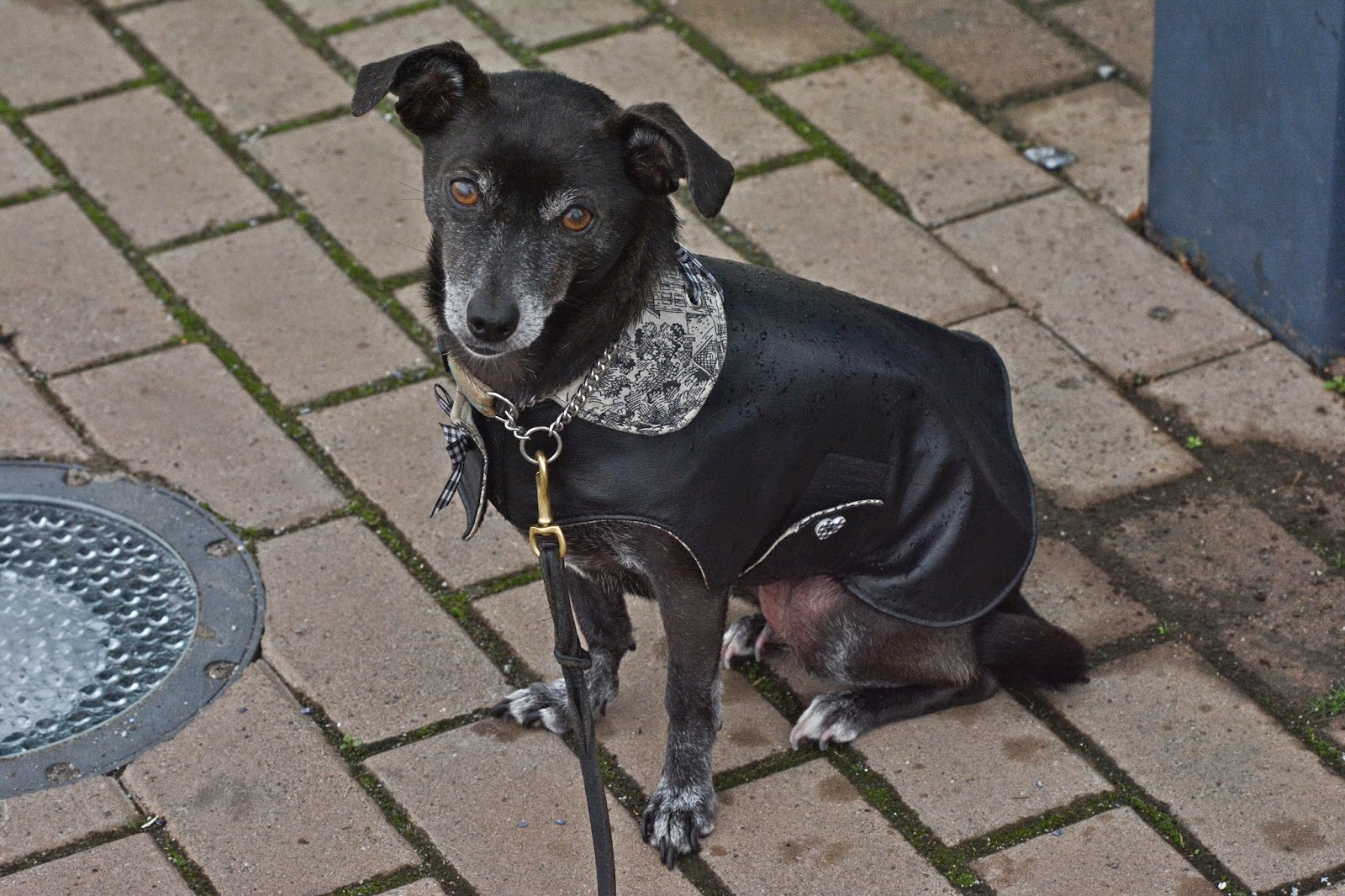 Even the cormorants seemed few and far between this morning.  I saw only this one.. 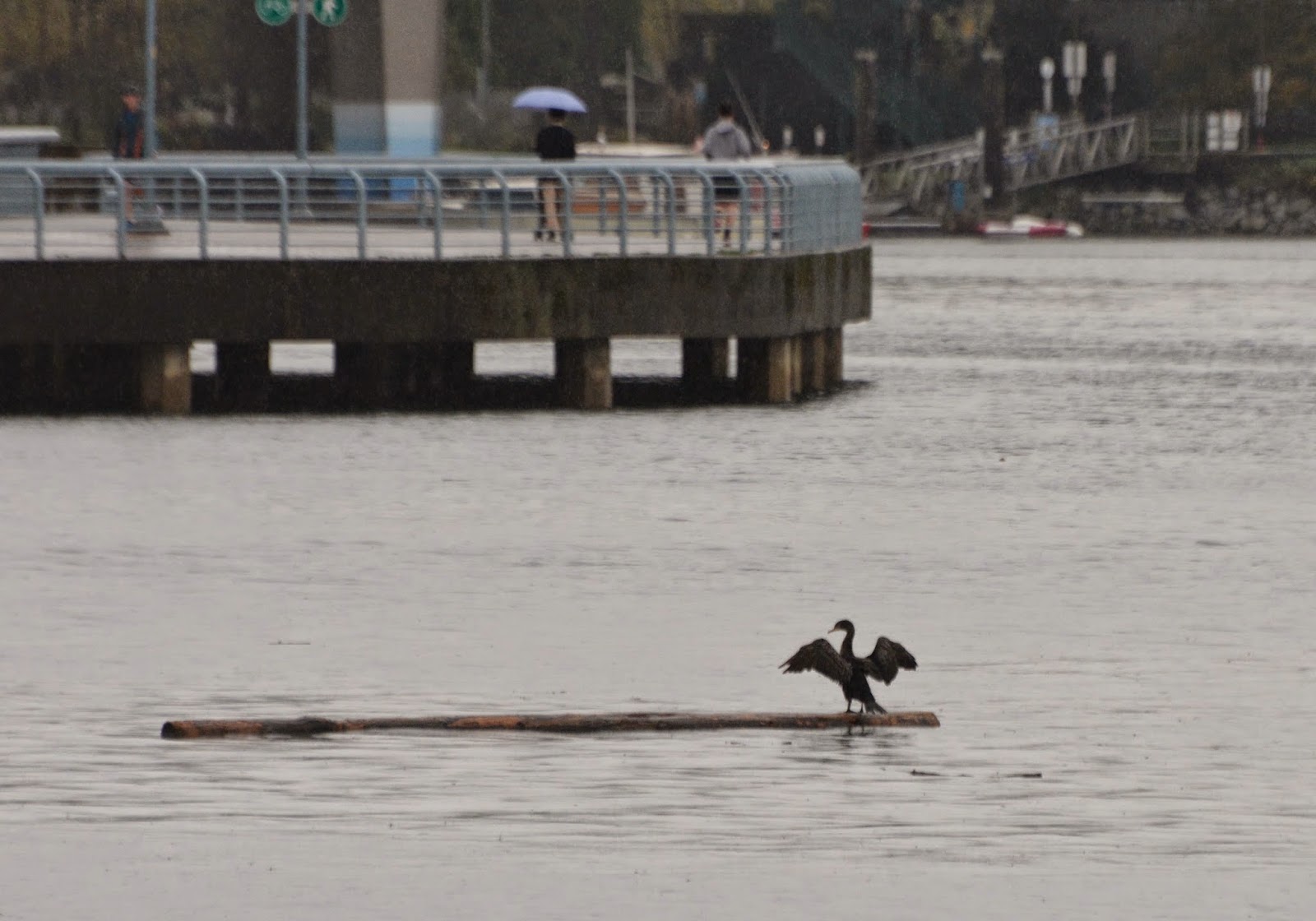 trying to dry his/her wings on a log in the rain..  a somewhat futile exercise. :) 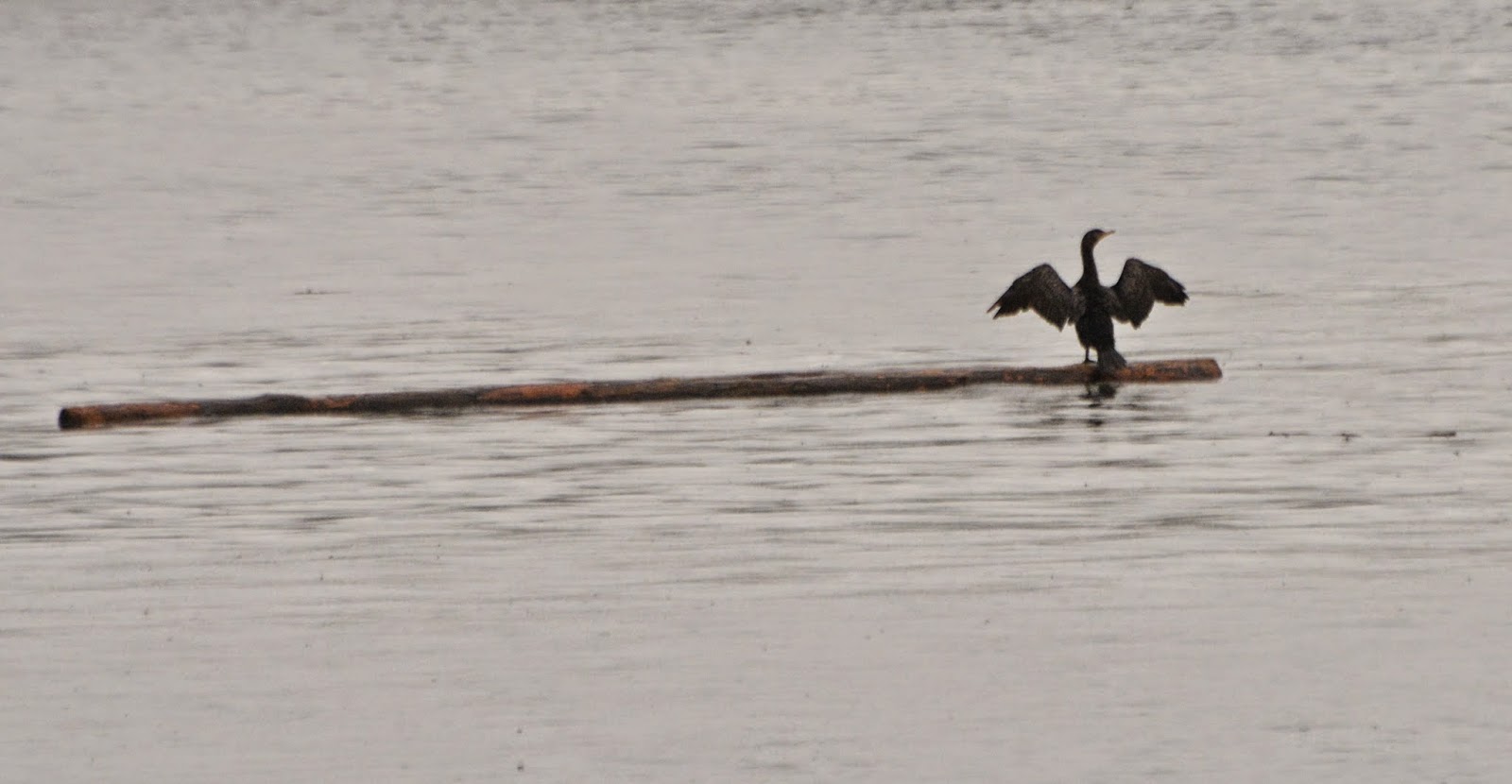 As I said, the crows followed me home.  This one sat in the flower pot on the landing.  I took this through the windows of the door in the lobby. 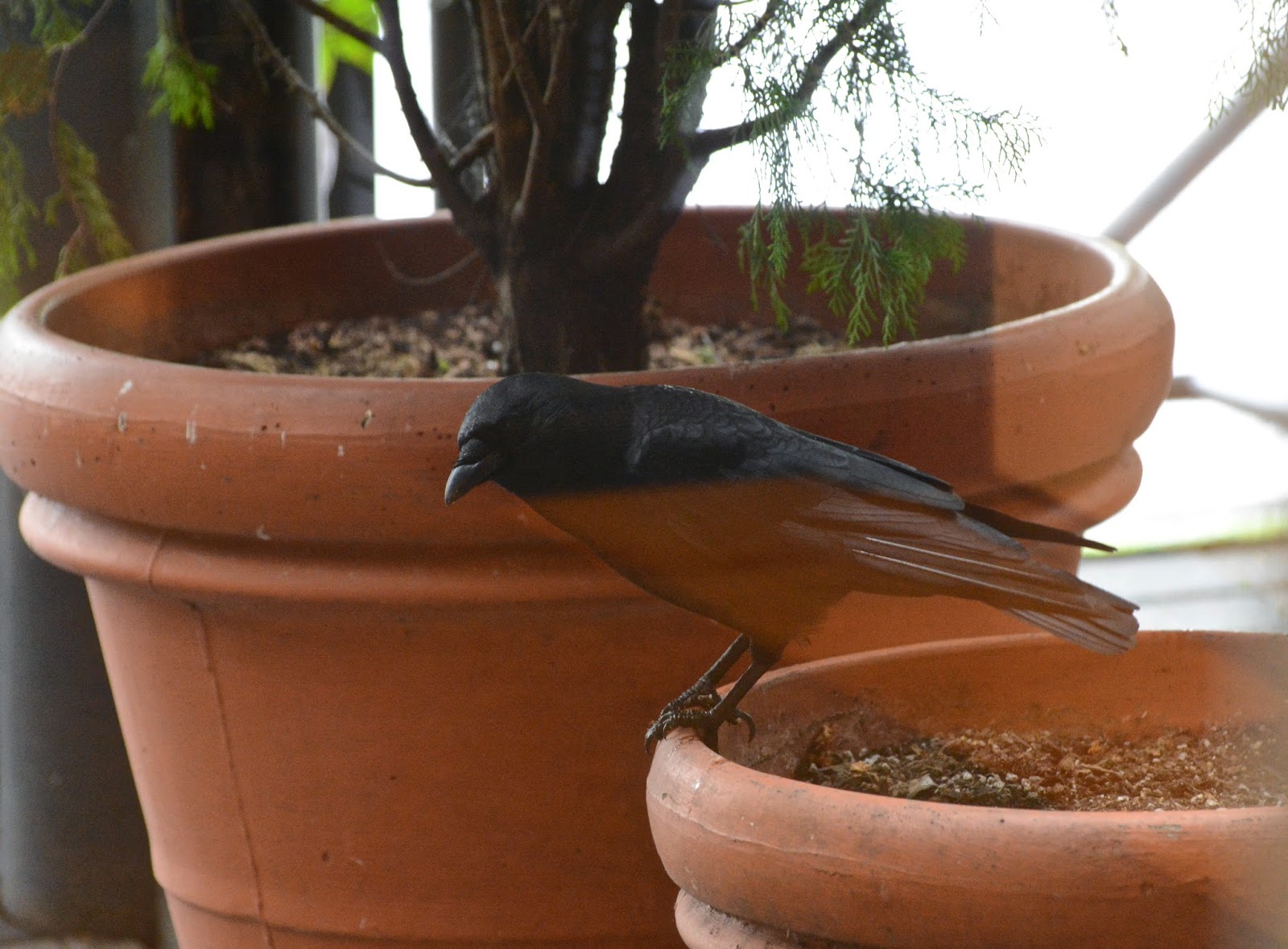 The second one sat on the porch railing.  Talk about making someone feel guilty! 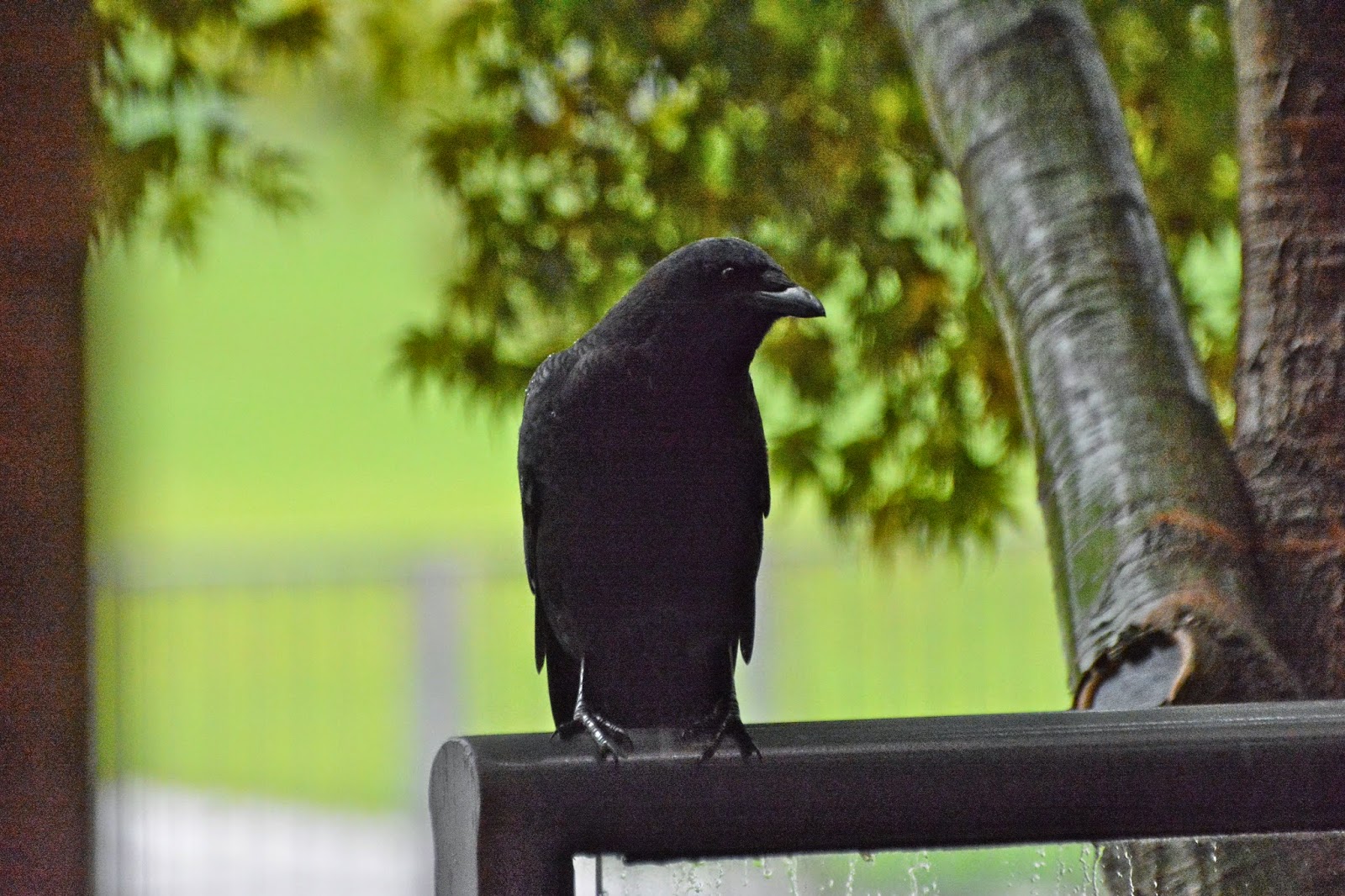 Also taken through the front door window.  Perhaps, s/he was looking up to our apartment, asking for the nice man (BIll) to come out and talk some sense into that lady who used to be more generous with her treats. 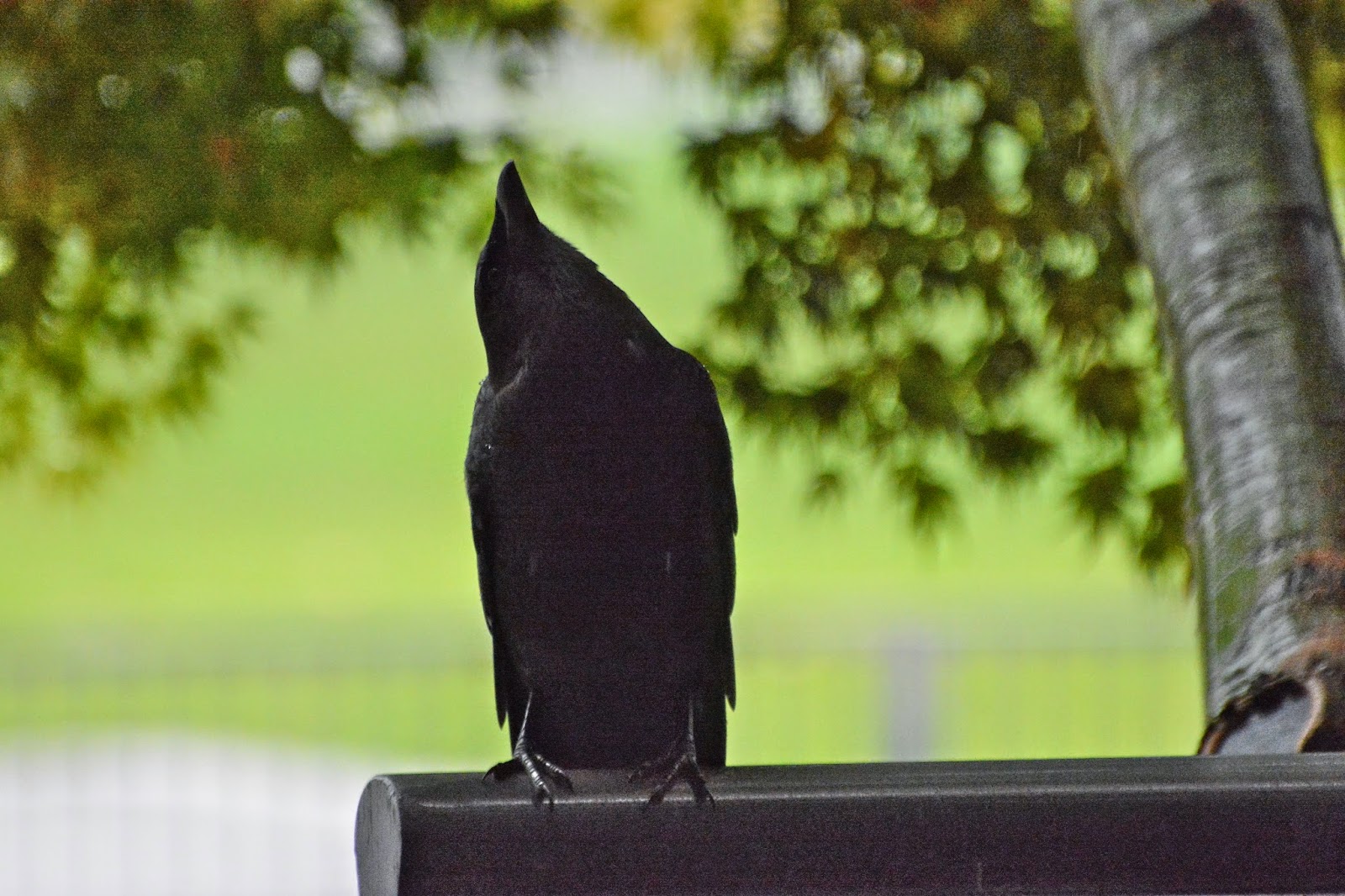 Rain or shine, I hope you are enjoying your day.  This cartoon by Bruce MacKinnon brought a smile (through teary eyes) after the senseless murders of two of our Canadian soldiers this past week.  As I wrote to my sister this morning,  he lifted a lot of heavy hearts with that cartoon..  I'm in awe that he could do that in such a swift way with just one picture.  My definition of a rare and wonderful talent.  Thank you so much for stopping by!  For more critters, do take a little trip over to visit Eileen's meme.
Posted by Black Jack's Carol at 11:38 AM