A stimulating and inspiring day on Saturday left my head spinning on Sunday morning and I couldn't seem to settle down to write.  Here I am on Monday morning, feeling a need to record the day, however it manages to surface from my thoughts.

I think this is Tupper, but she is changing so much lately, it is harder to be sure. 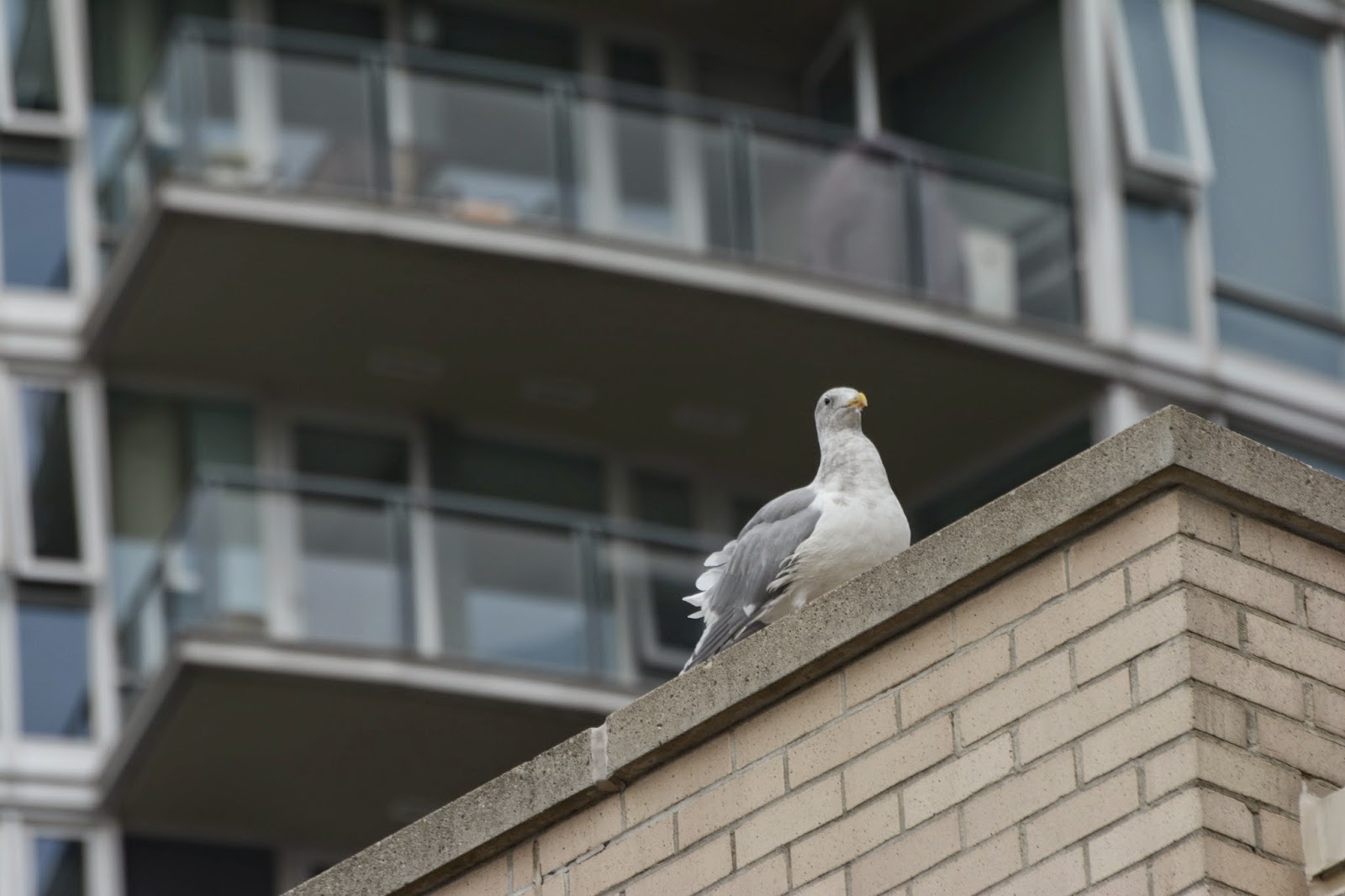 She was about to fly to me yesterday when she saw this gull fly by  They flew at each other, calling out what sounded like a challenge, but in the end, went on their separate ways. 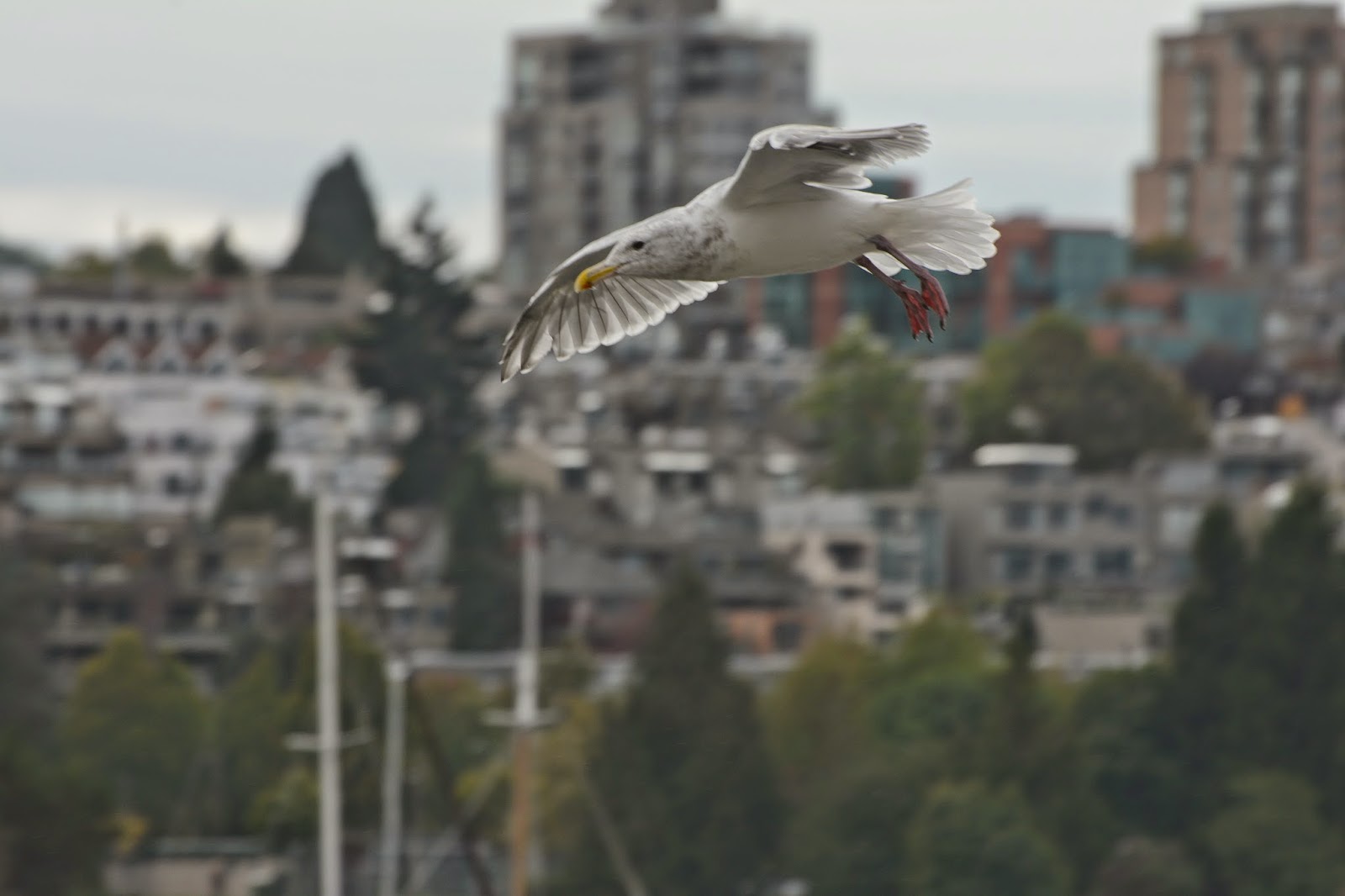 Later in the day, Bill and I rode our bikes to Vancouver Playhouse to see Marinoni: Fire in the Frame, one of Vancouver's International Film Festival movies. 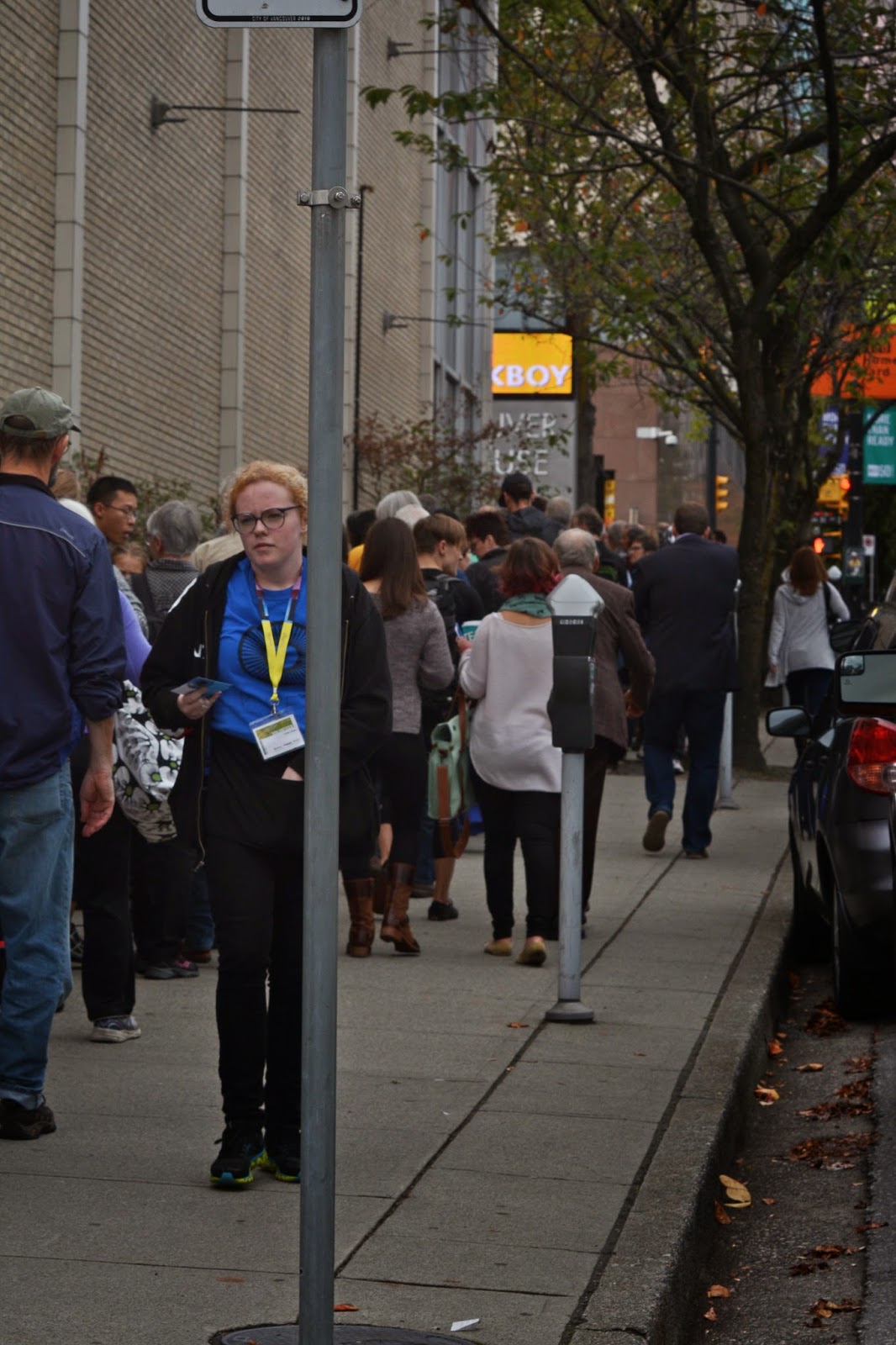 People were lined up around the block.  Bill and I already had our tickets and arrived in good time, but were still near the end of the line. 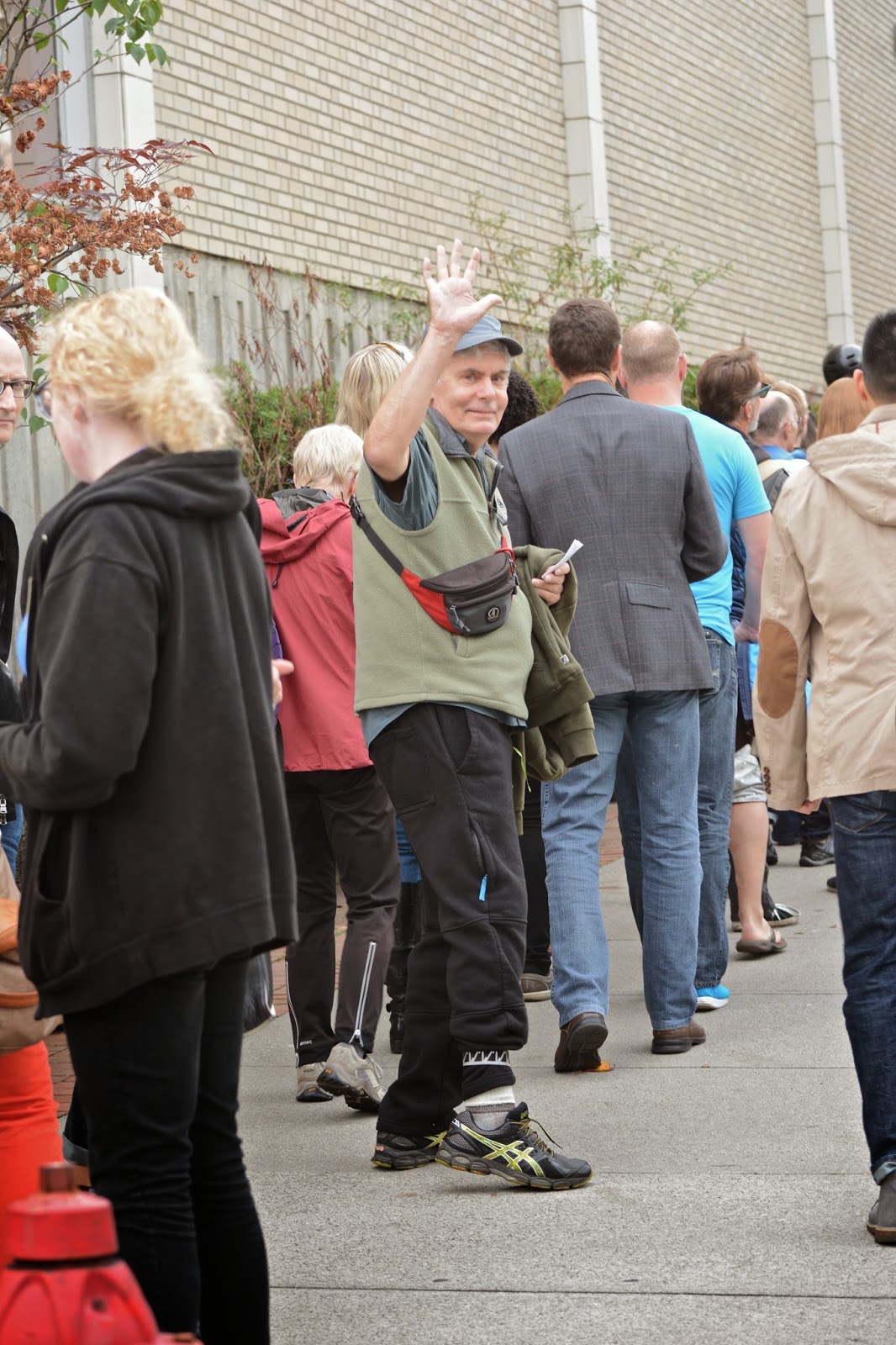 I took photos of building and sky reflections as we waited for admission to the theatre. 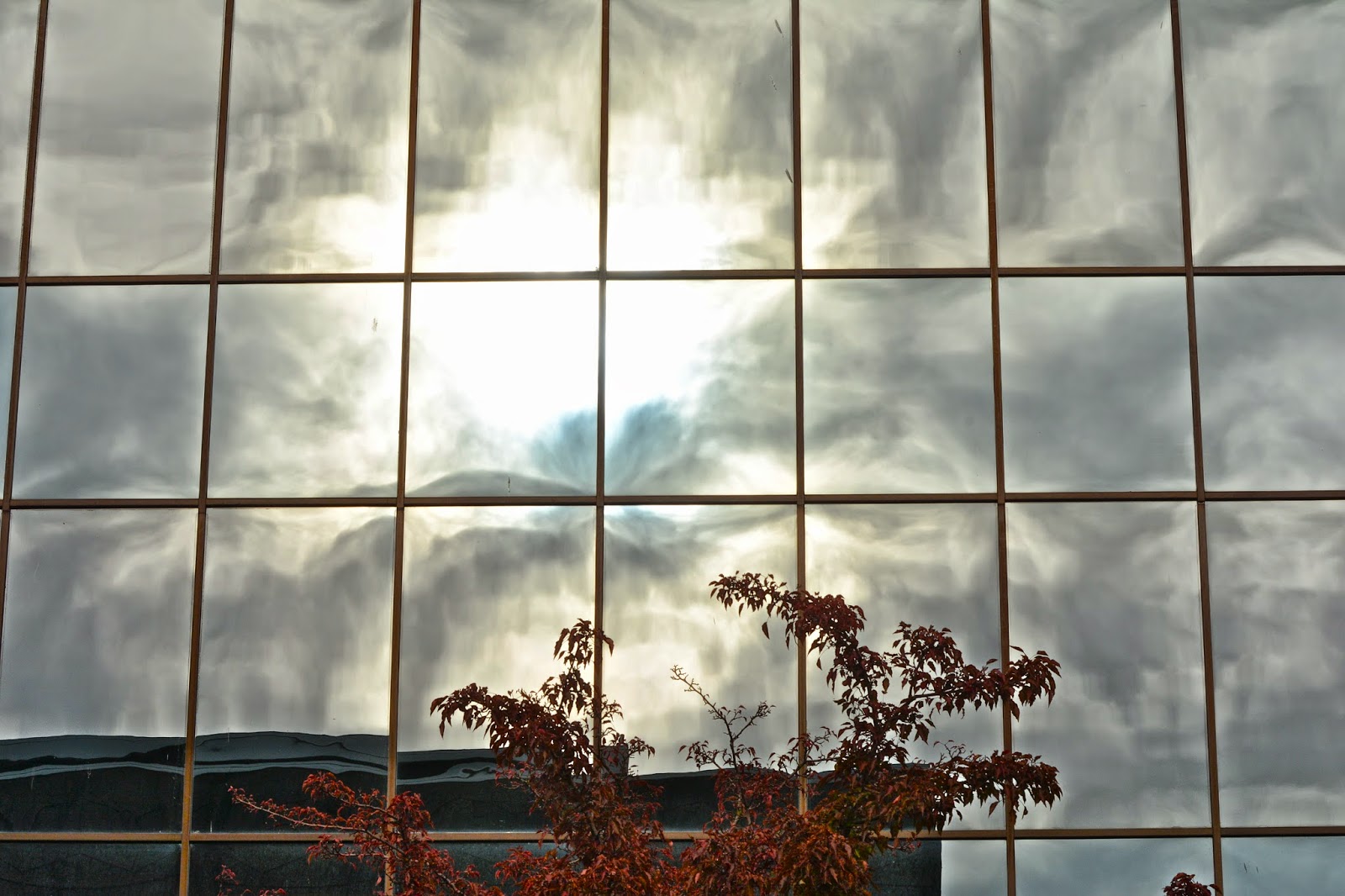 I knew only that Giuseppe Marinoni was a Quebec (near Montreal) bicycle maker, now in his mid 70's, and that the film had to do with his desire to set a cycling record for his age group.  There were many who rode their bikes to the theatre, and very few places to lock them up.  Bill found a spot for our bikes, but the two people you see on the right are still searching. 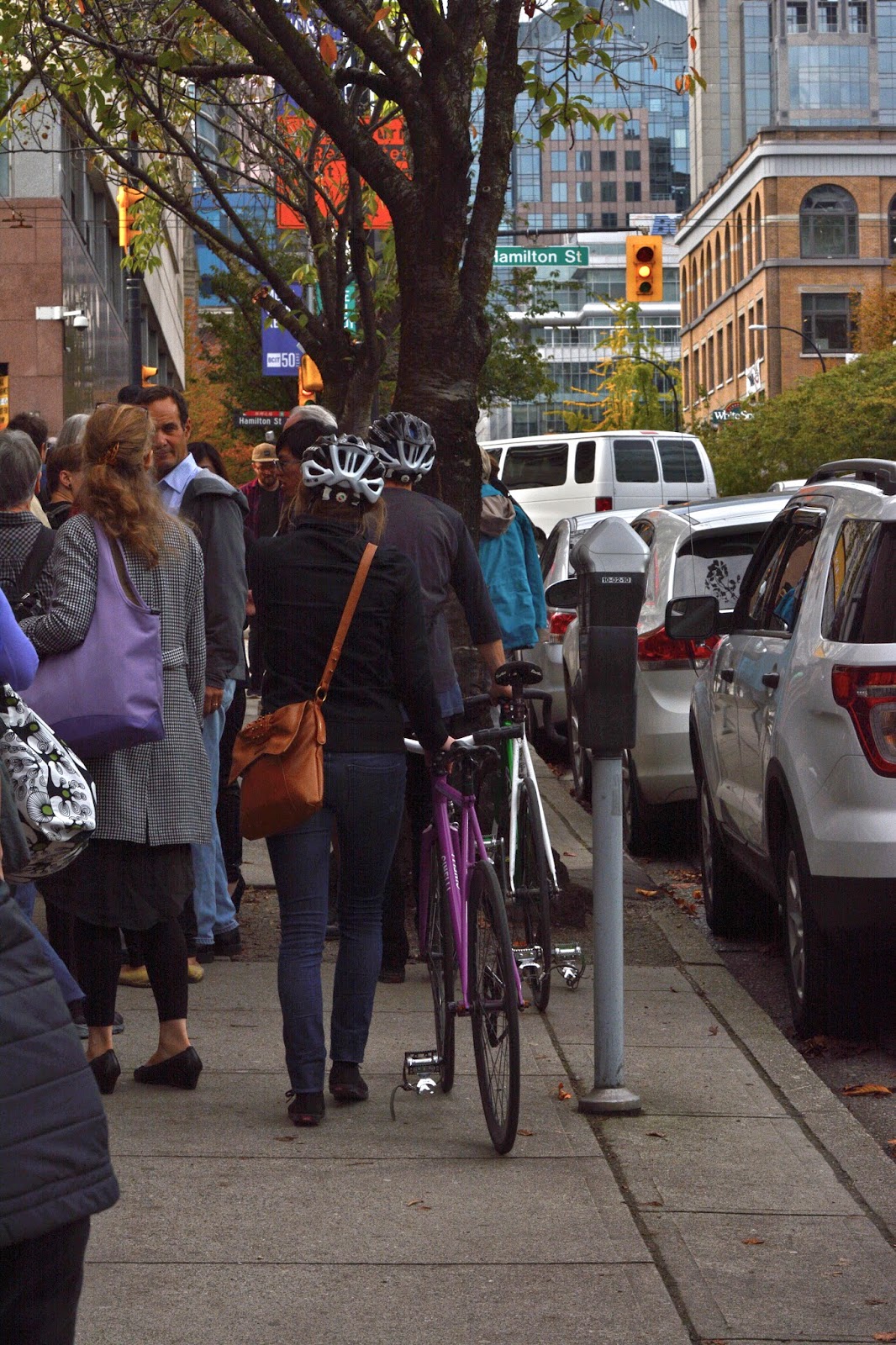 Construction continues nonstop around the city.  Bill noticed this roof and commented that it appears to be a unique design. 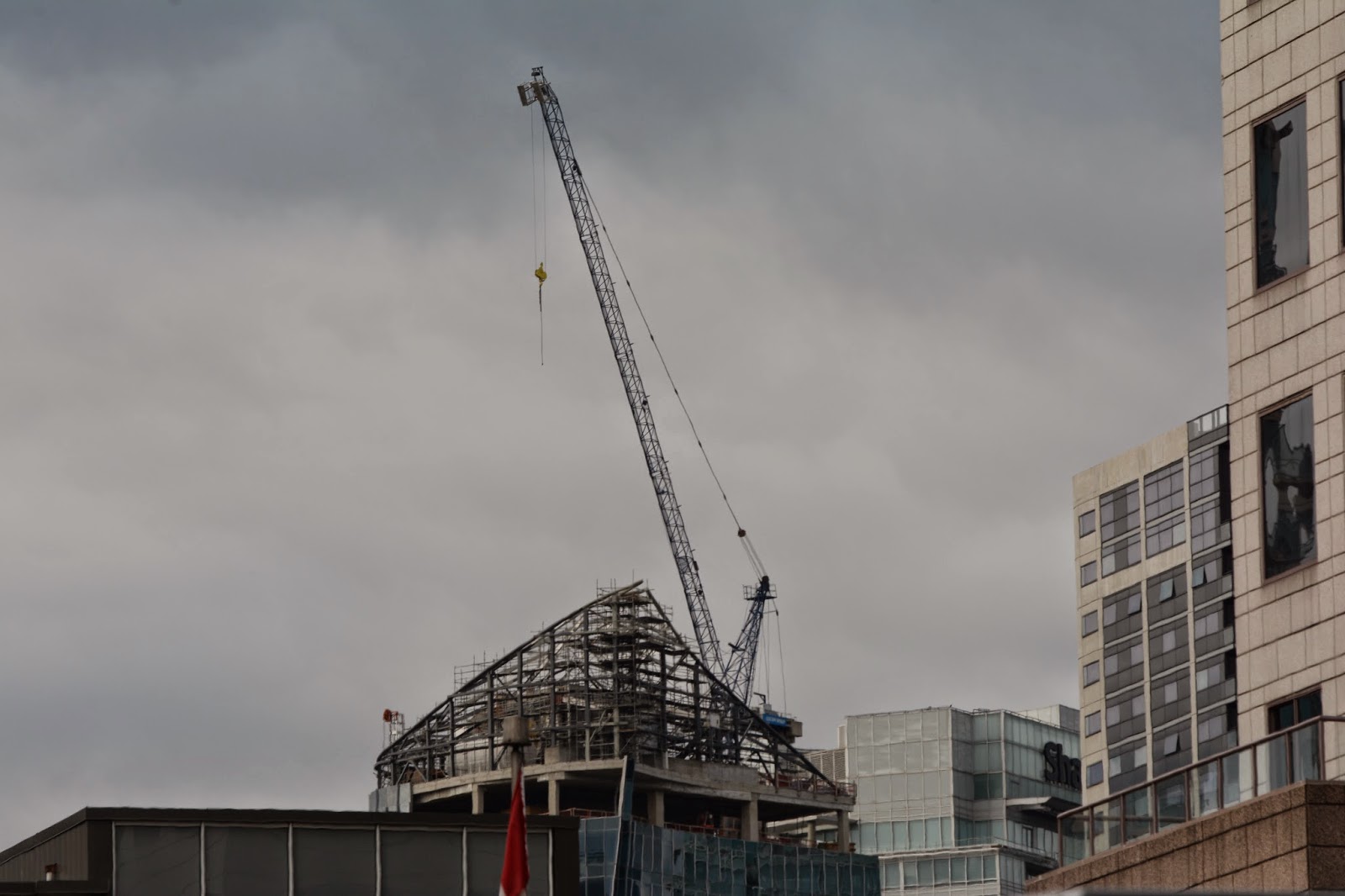 I was happily taking reflection shots, 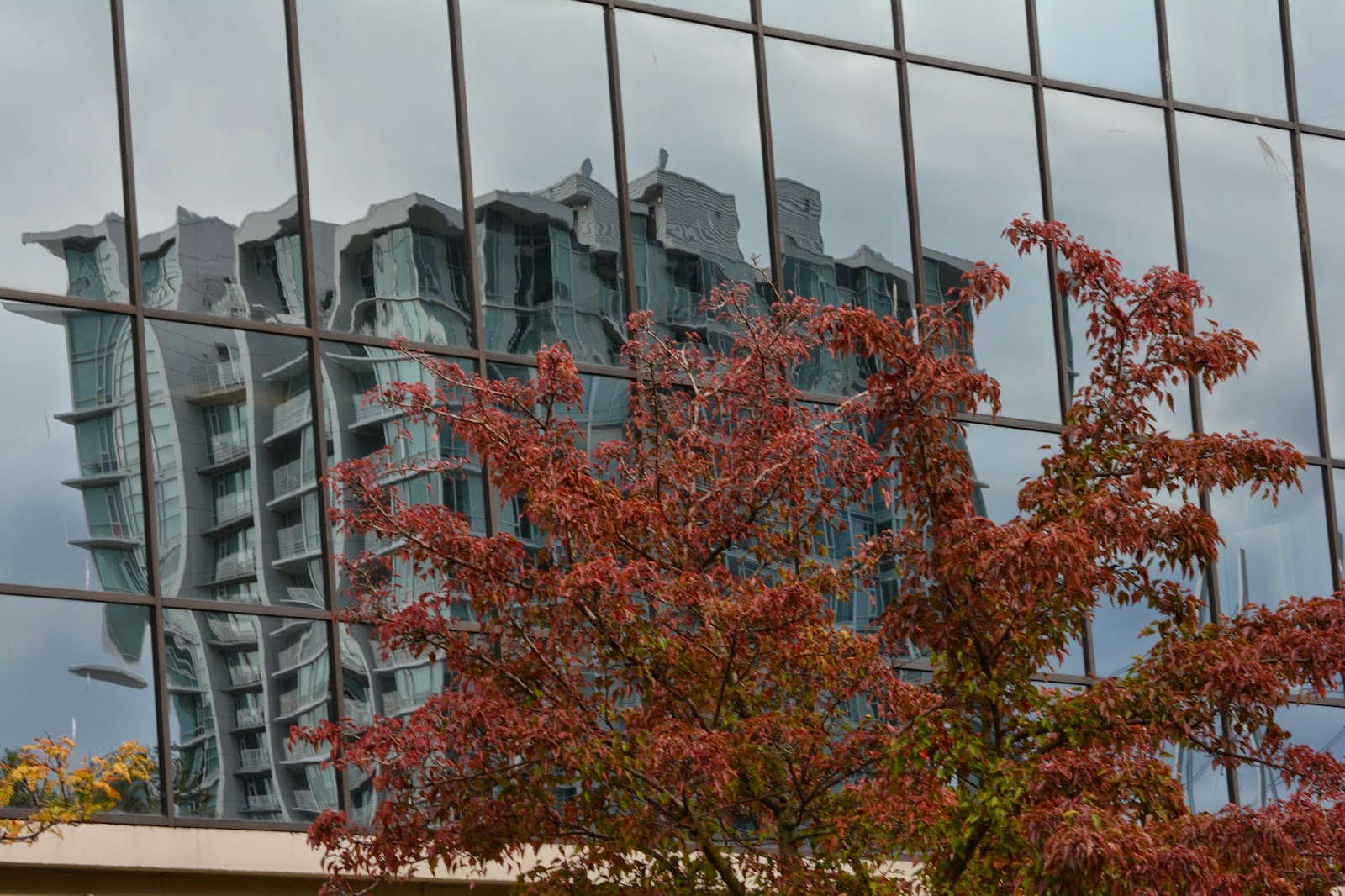 when this young volunteer asked if I would be willing to answer some survey questions.  I agreed and she followed us along as the line of people worked its way into the theatre.  I am thankful for the work of volunteers.  The arts open avenues of thought that enhance my understanding of the world around me.  The financial and emotional costs are huge, and without help from thousands of volunteers, many projects might never come to fruition. 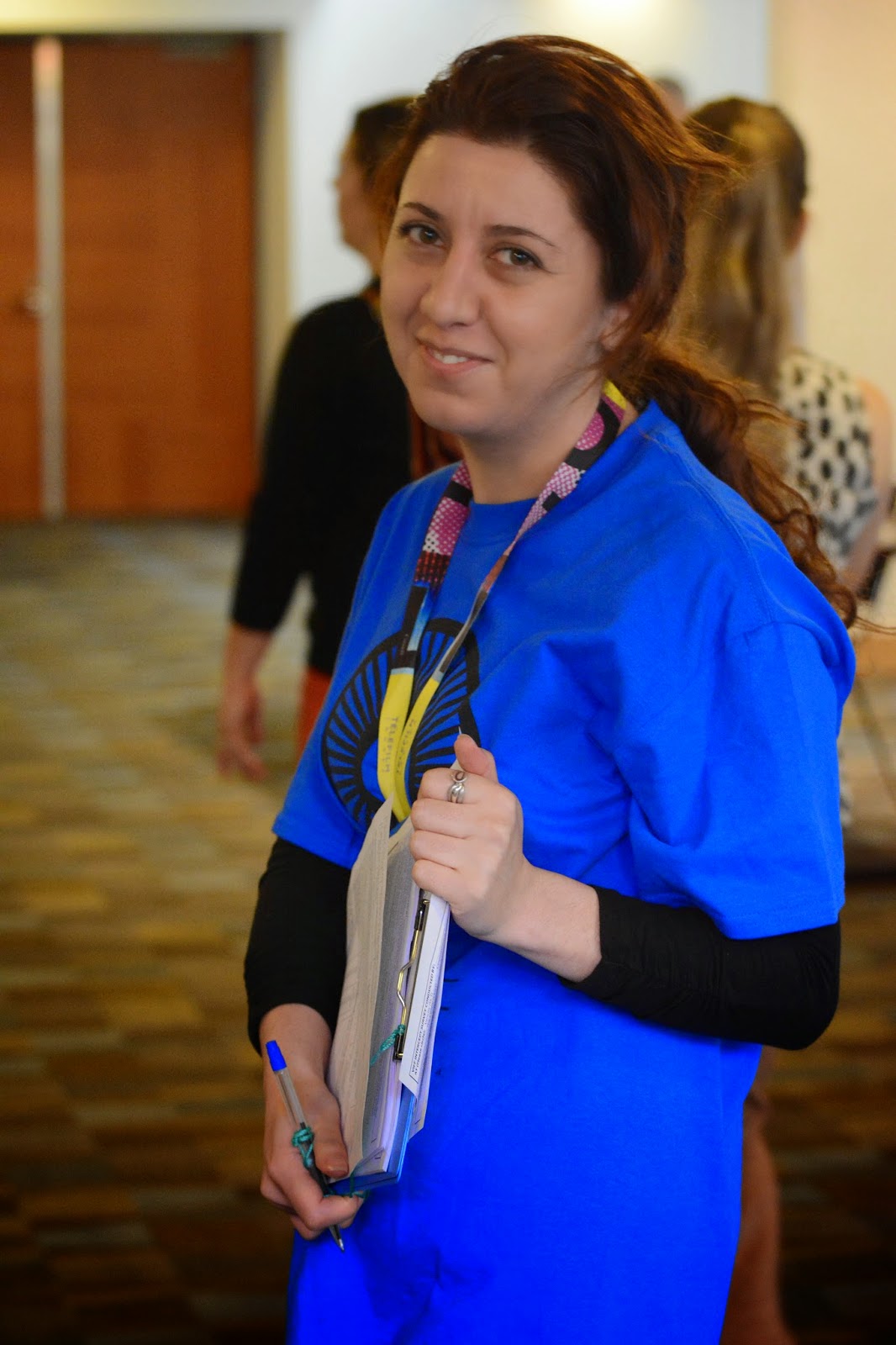 It was a huge theatre and almost every seat on the main floor was occupied. 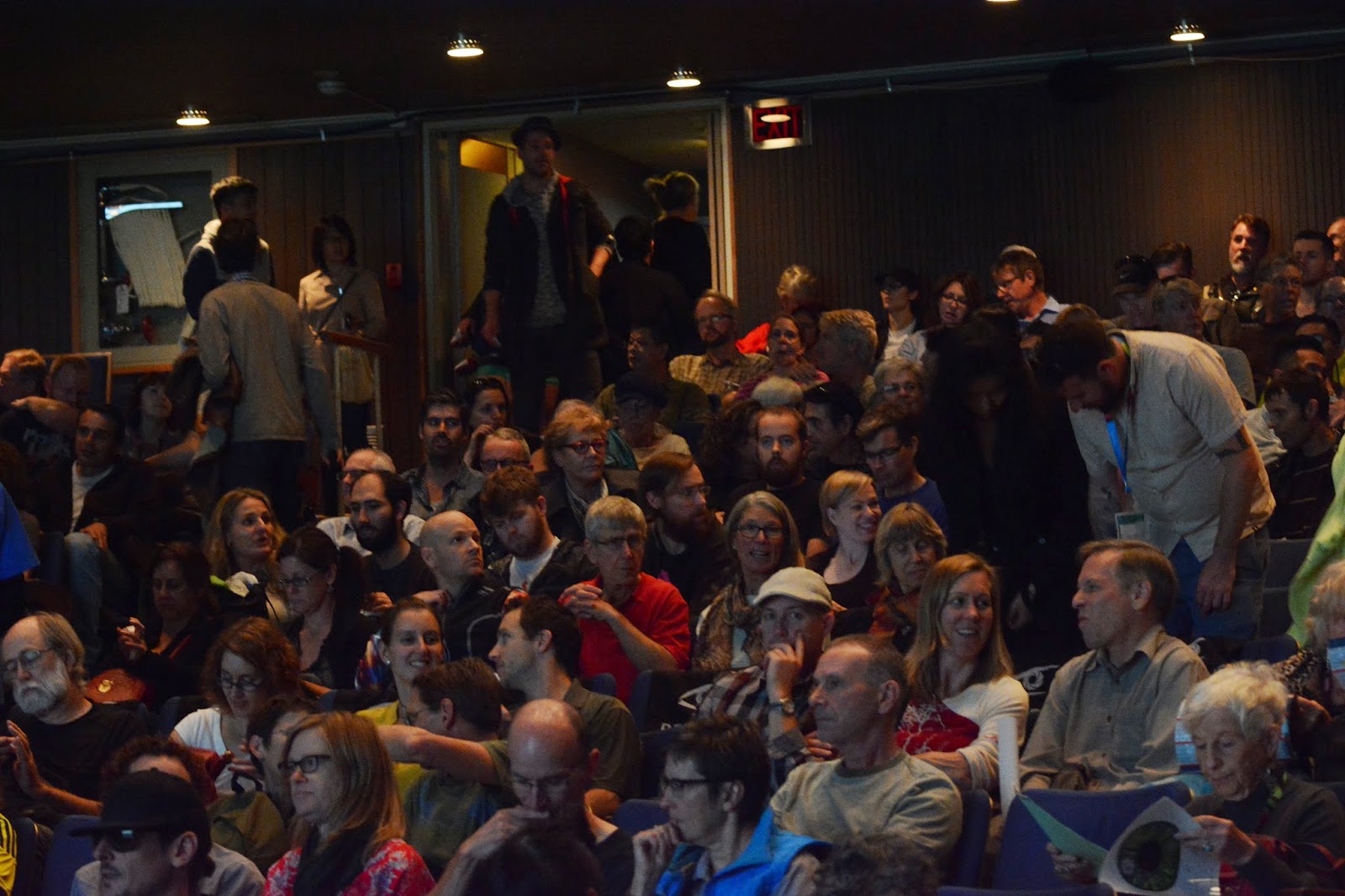 As we sat down, my heart began to beat a little faster and my skin was tingling with anticipation.  From the first shot of Giuseppe Marinoni's expression when he was asked what he considered to be an inane question, I knew I was in for a treat.  He had agreed to the documentary, but the reality of  the intrusion on his life and work really hit him at that moment.  The question?  "How long does it take to learn to make a really great bike?"  I snapped this photo from the screen, but the play of emotions over his face changed from one second to the next in a progression that seemed eternal before he finally exploded with a tirade along the lines of, "How can you possibly expect me to answer that question?"  He continued to say that he had just done the worst welding job of his life, and that it was because the weld felt the stress of being filmed. 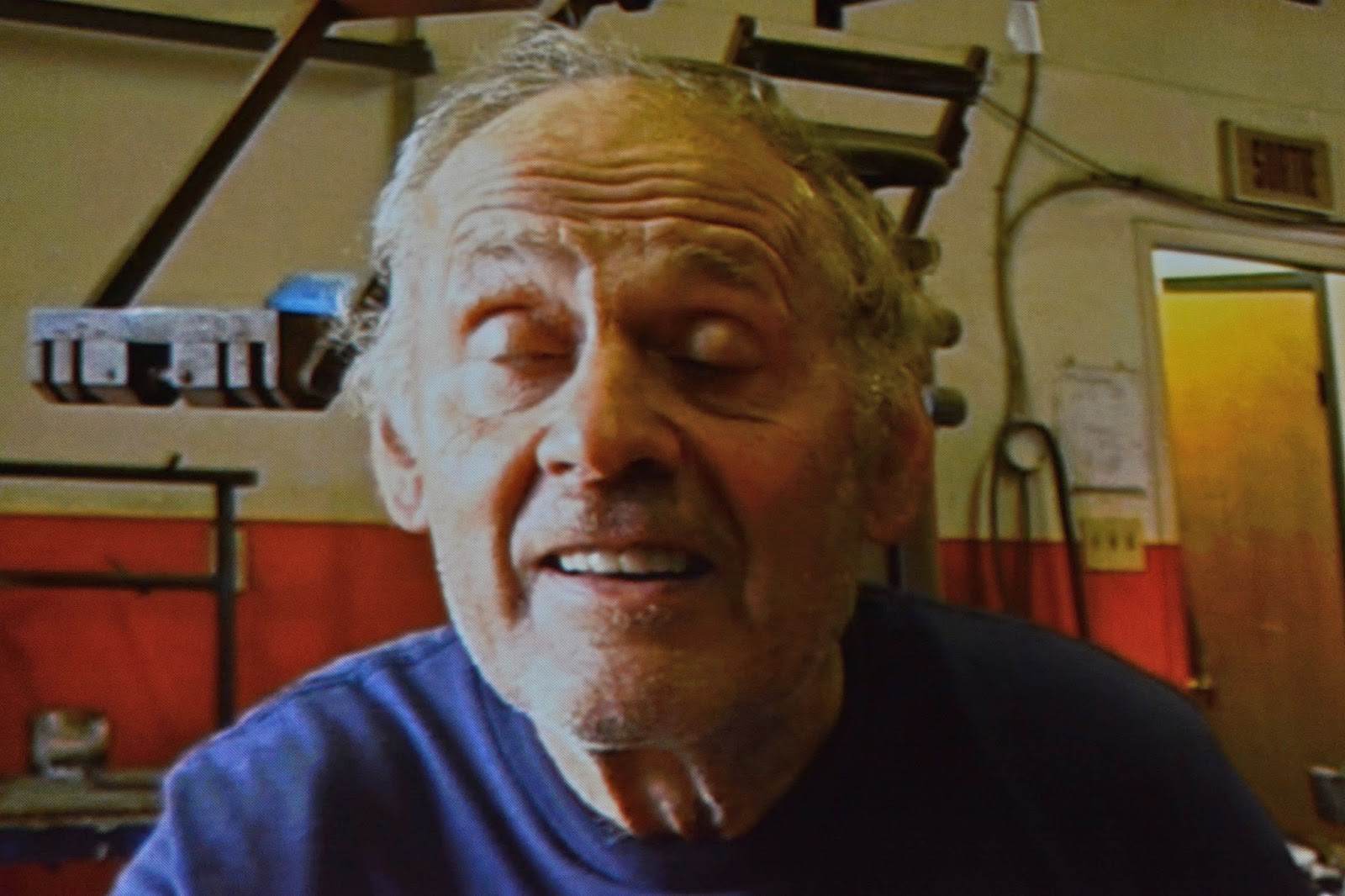 It took Tony Giradin three years to convince Mr. Marinoni to do this project, and this was one of their first shoots.  Another person might have given up, but I've noticed that the best documentaries have directors at least as passionately driven as their subjects. Cyclists in Montreal know Mr. Marinoni and respect him for the craftsman that he is and the racer that he was.  He puts his whole heart into every bike frame and he won't make them for just anyone.  He has to see something in you. 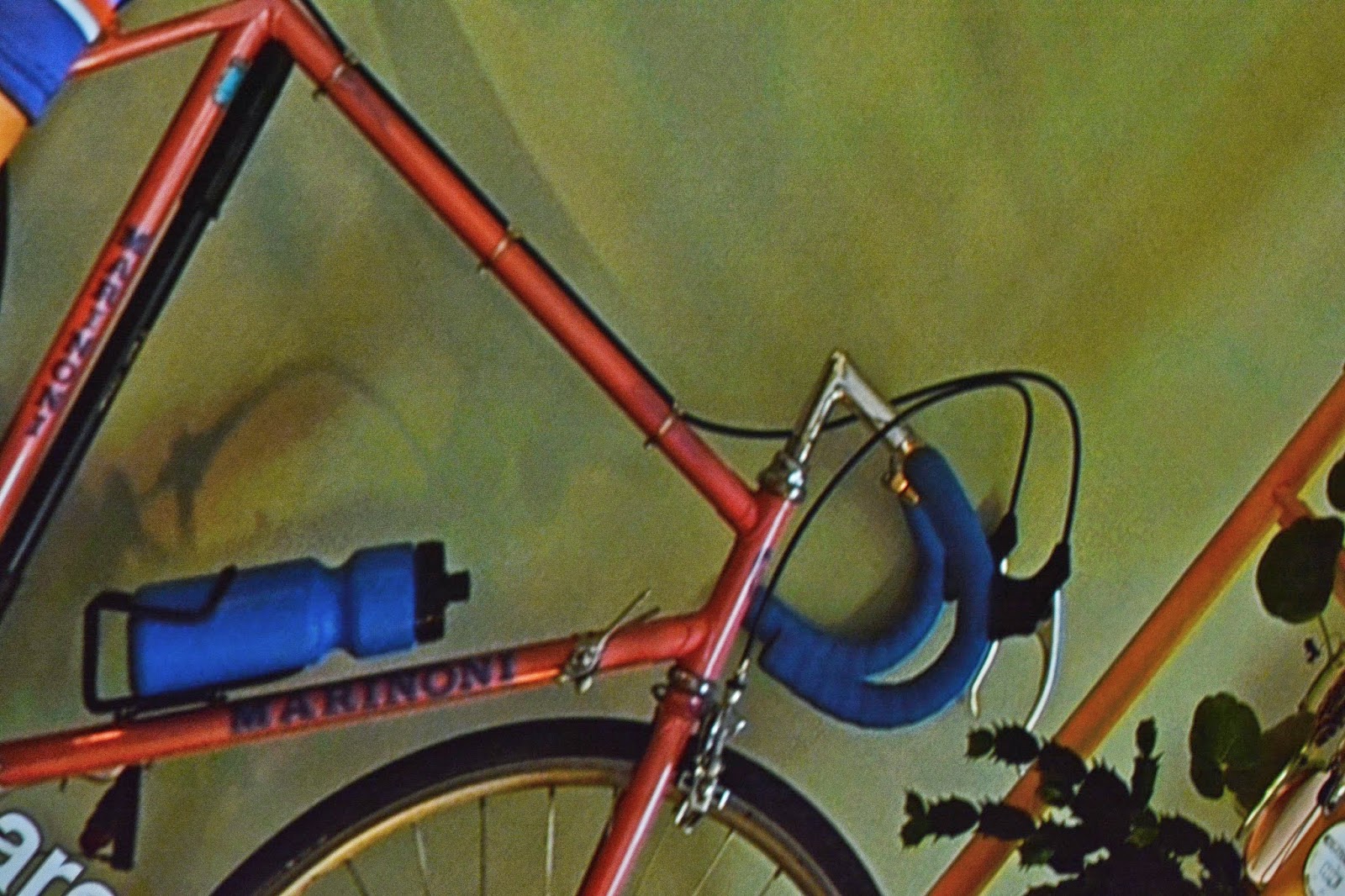 His Italian heritage is brought forward beautifully in the film.  He loves his hens, appreciates that they give him eggs to eat and wonders at the inhumanity of those who could kill one.  "Don't you kill them when you eat chicken?" he is asked.  I won't tell you how he answered that question, but it said much to me about his sharp humour and about his personality. 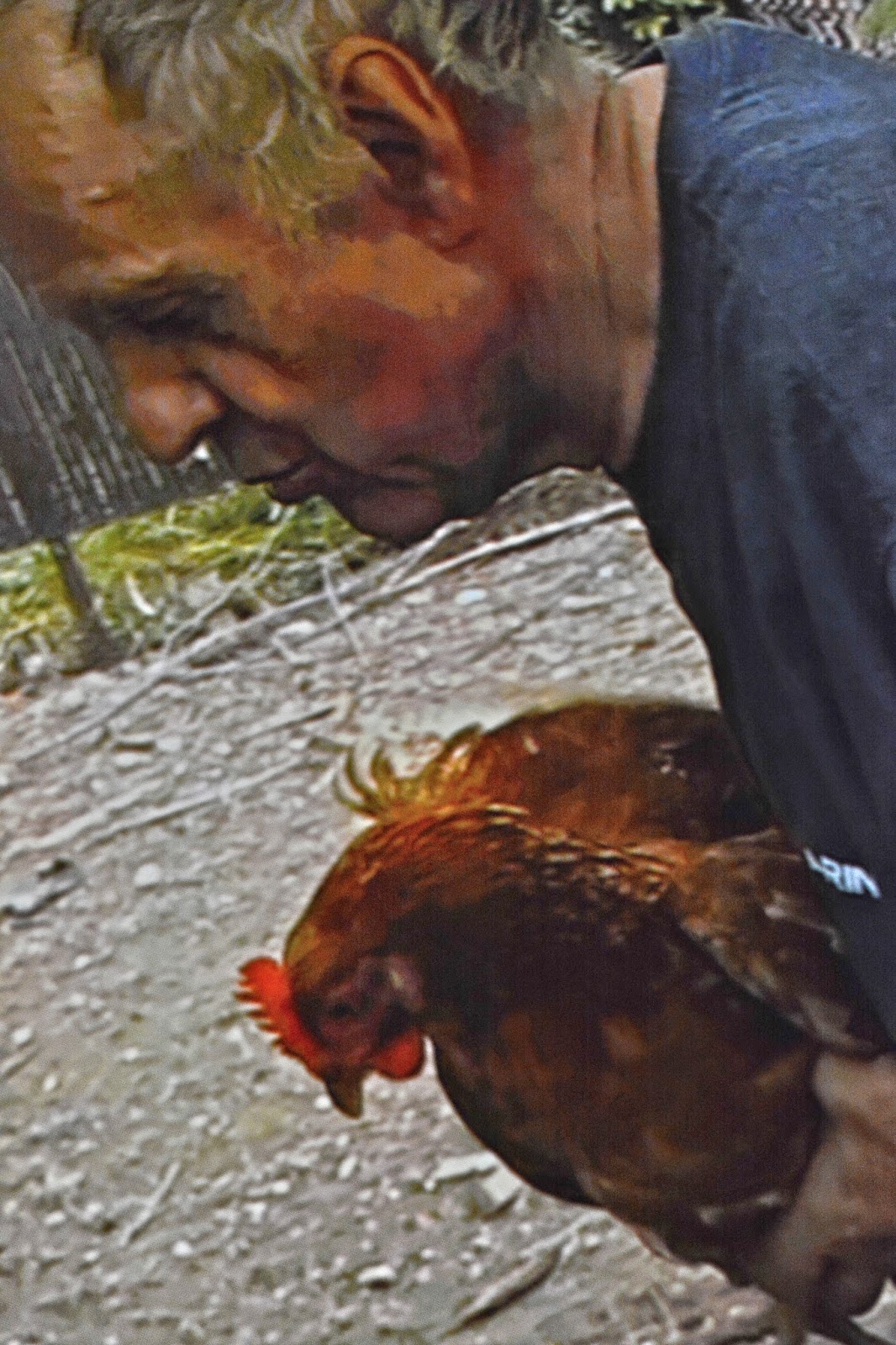 Giuseppe came to Quebec from Italy in the 1960's.  He married Simone who continues to work in the business with him.  One person interviewed made the point that she is at least as important as her husband in the success of his life work. 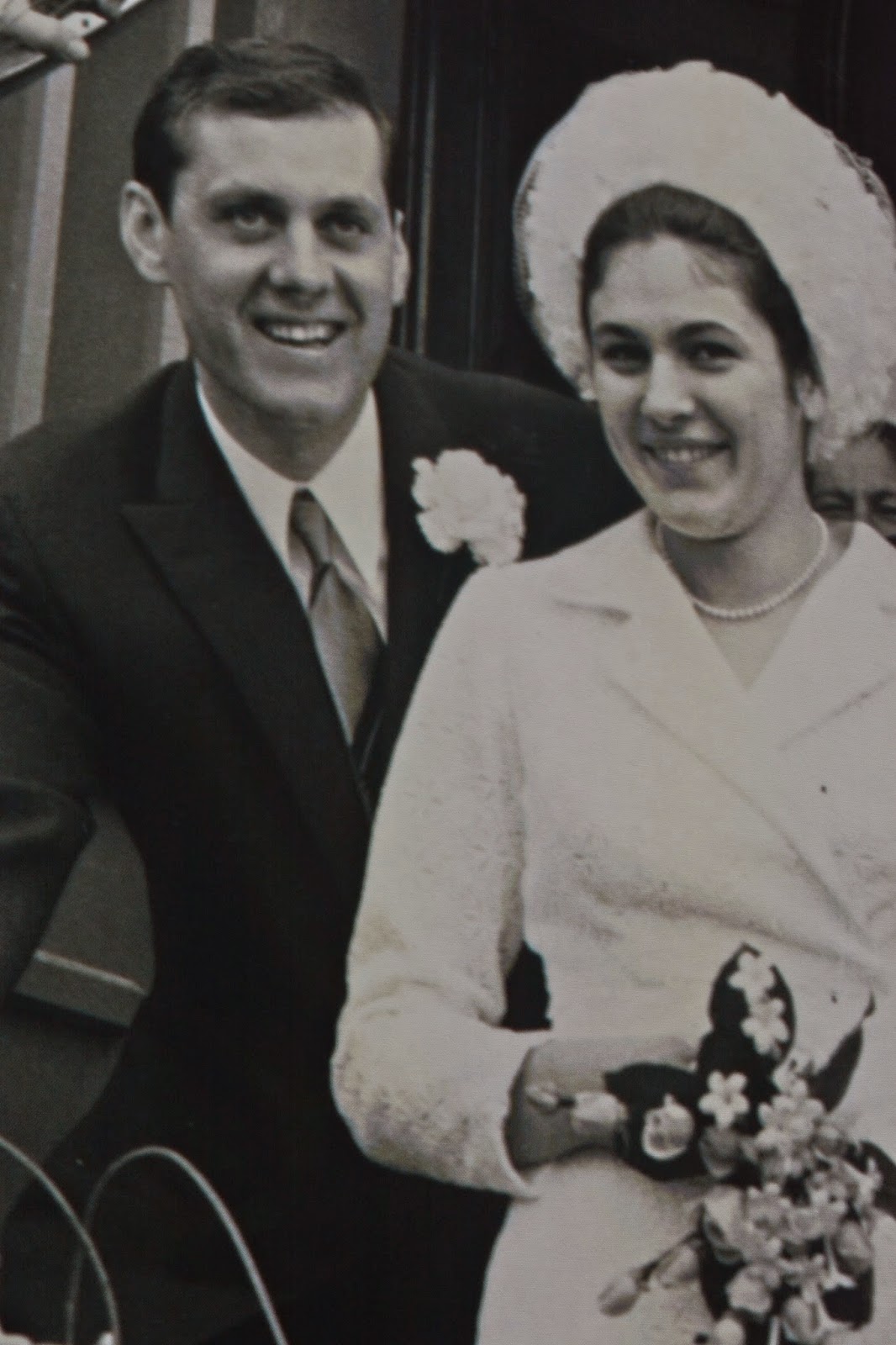 Over and over, Mr. Marioni's passion for the things in life that he finds beautiful come through.  The tomatoes in his garden, 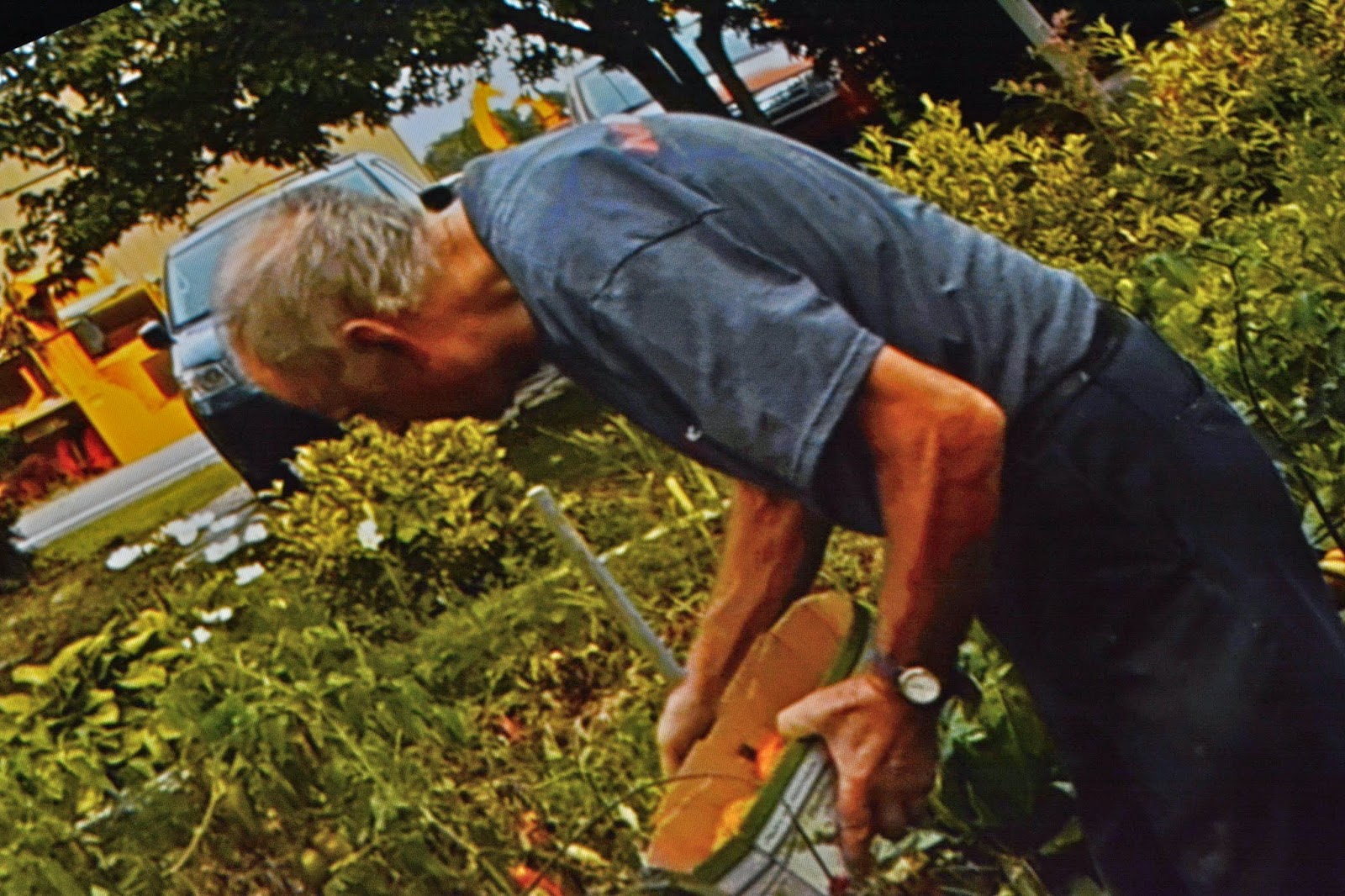 the mushrooms in the forest, 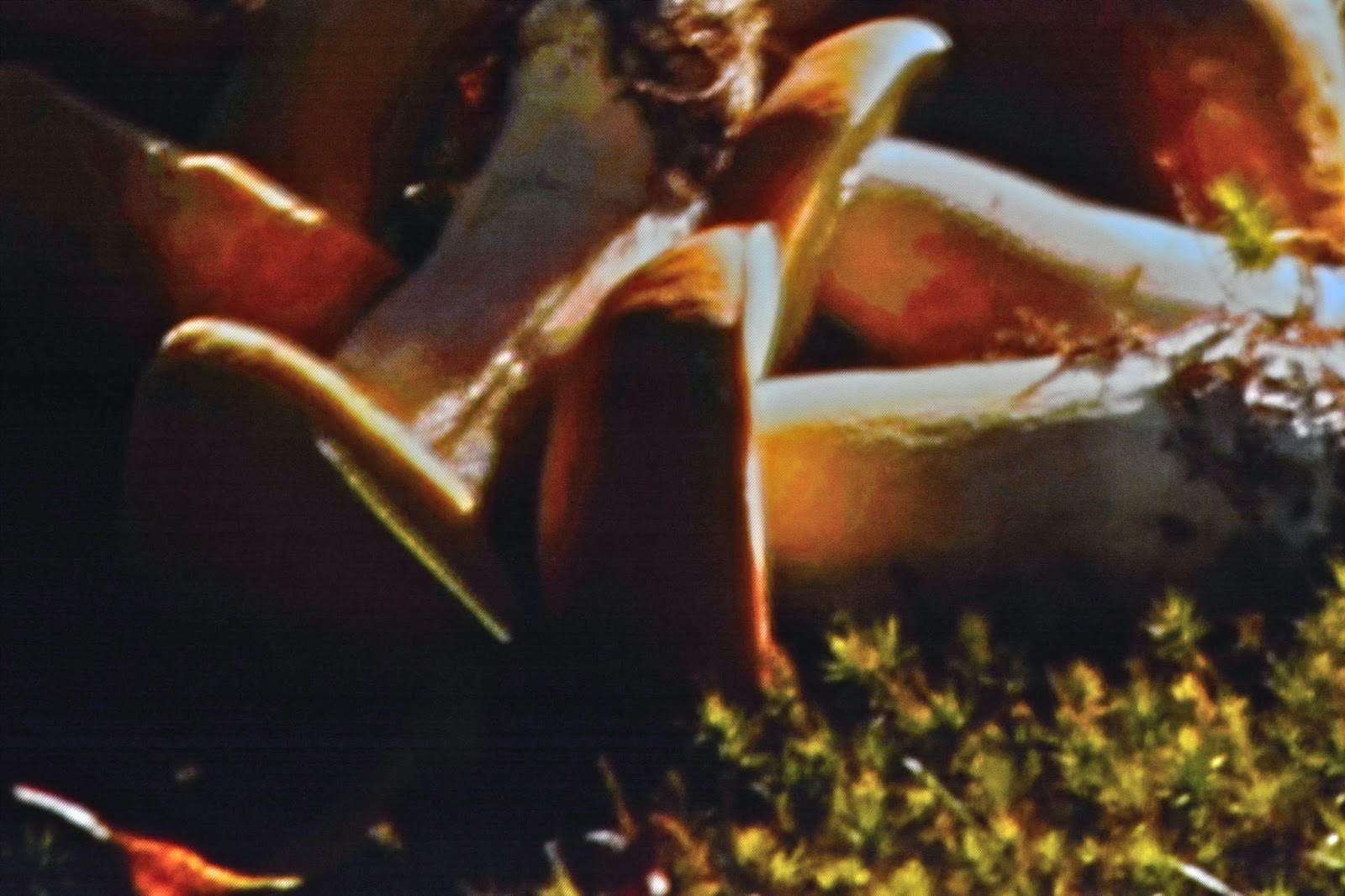 and a bike frame designed with love all brought smiles that lit up his face.  I felt that those who know him would be willing to go through something close to fire and brimstone to be the recipient of a smile like that.  No wonder Tony (movie director) stuck.. 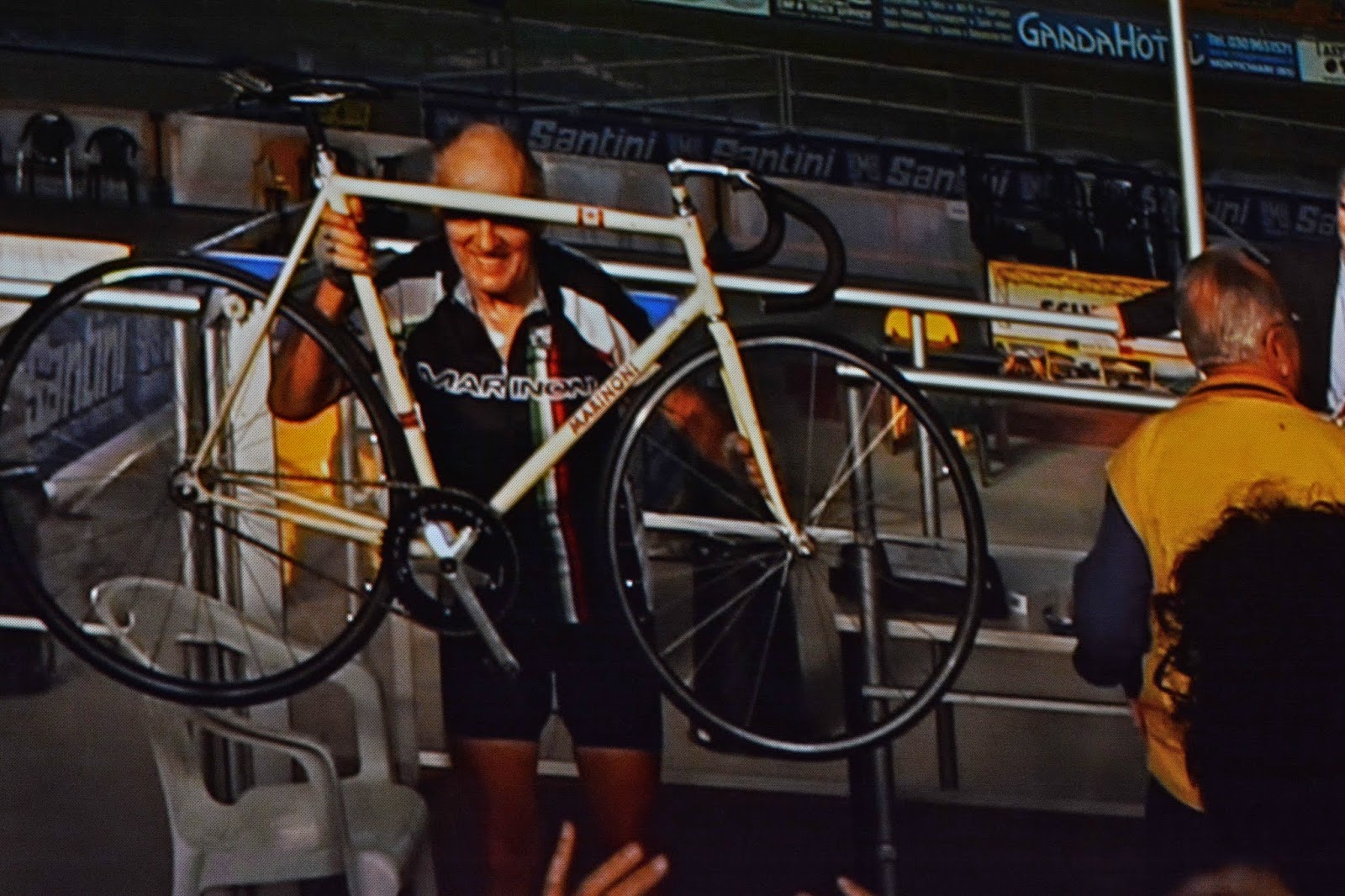 with the movie.  They traveled together to Italy, and there, I came to appreciate  something of the heritage of metal workmanship that was ingrained in Mr. Marinoni's background.  There, too, I could feel the bond strengthening between film maker and subject.  The stories and jokes with friends and second thoughts about training and inability to give up began to work their way into an overall picture of passion that boils down in my mind to what makes life good.  I knew I was seeing a gem here, and that tingling I told you about as I sat down? 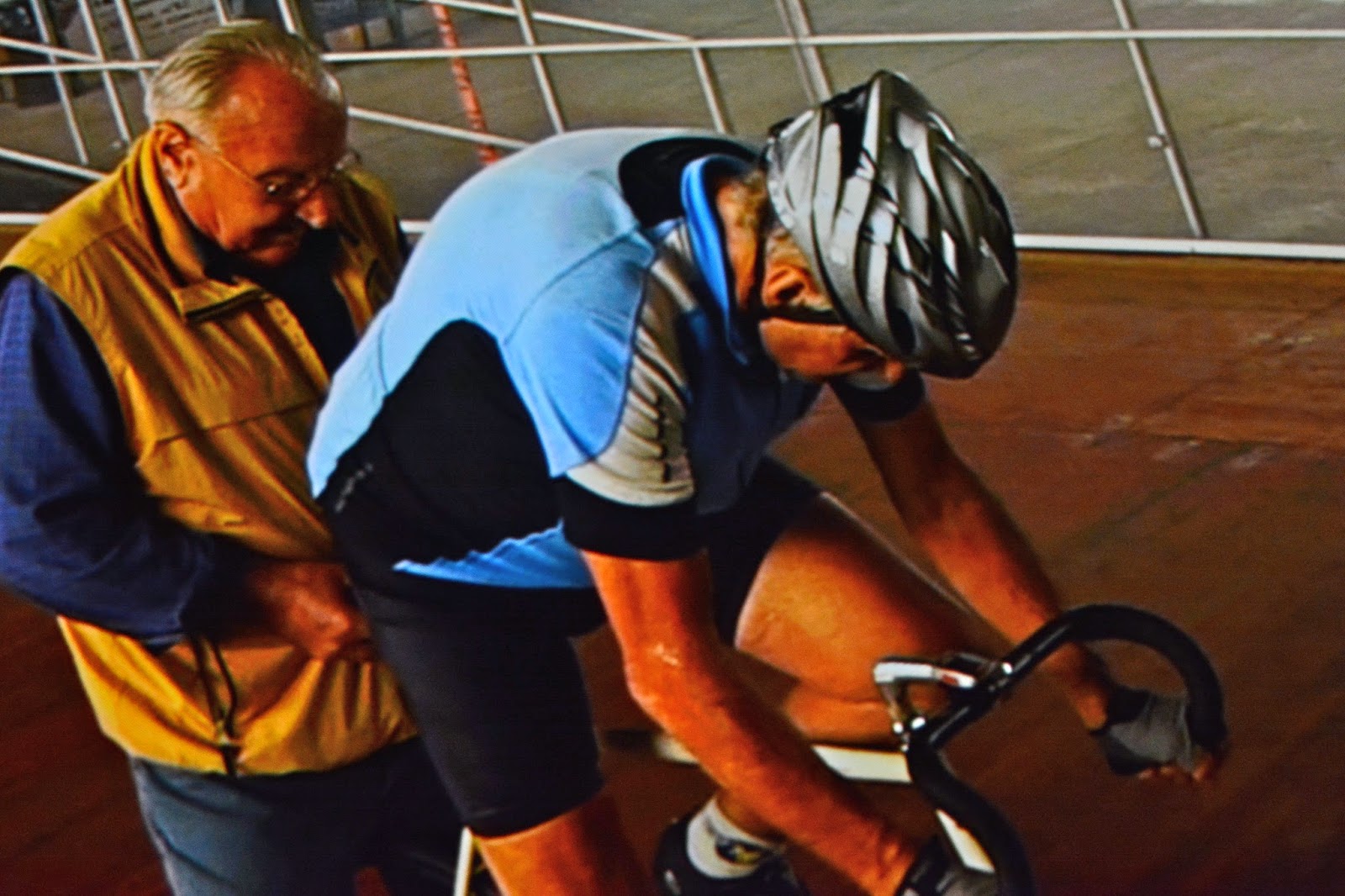 Well, it didn't go away throughout the entire movie.  It is still happening this morning as I write.  The hairs on my arm stand up and a warmth climbs from my toes into my cheeks and from there to my scalp and I am overwhelmed with gratitude, both to Mr. Marinoni for finally agreeing to show us a little (well, actually, a lot) of his heart, and to Tony for hanging in when I know he was exhausted beyond anything he could have anticipated when the idea of recording Mr. Marinoni's life occurred to him. 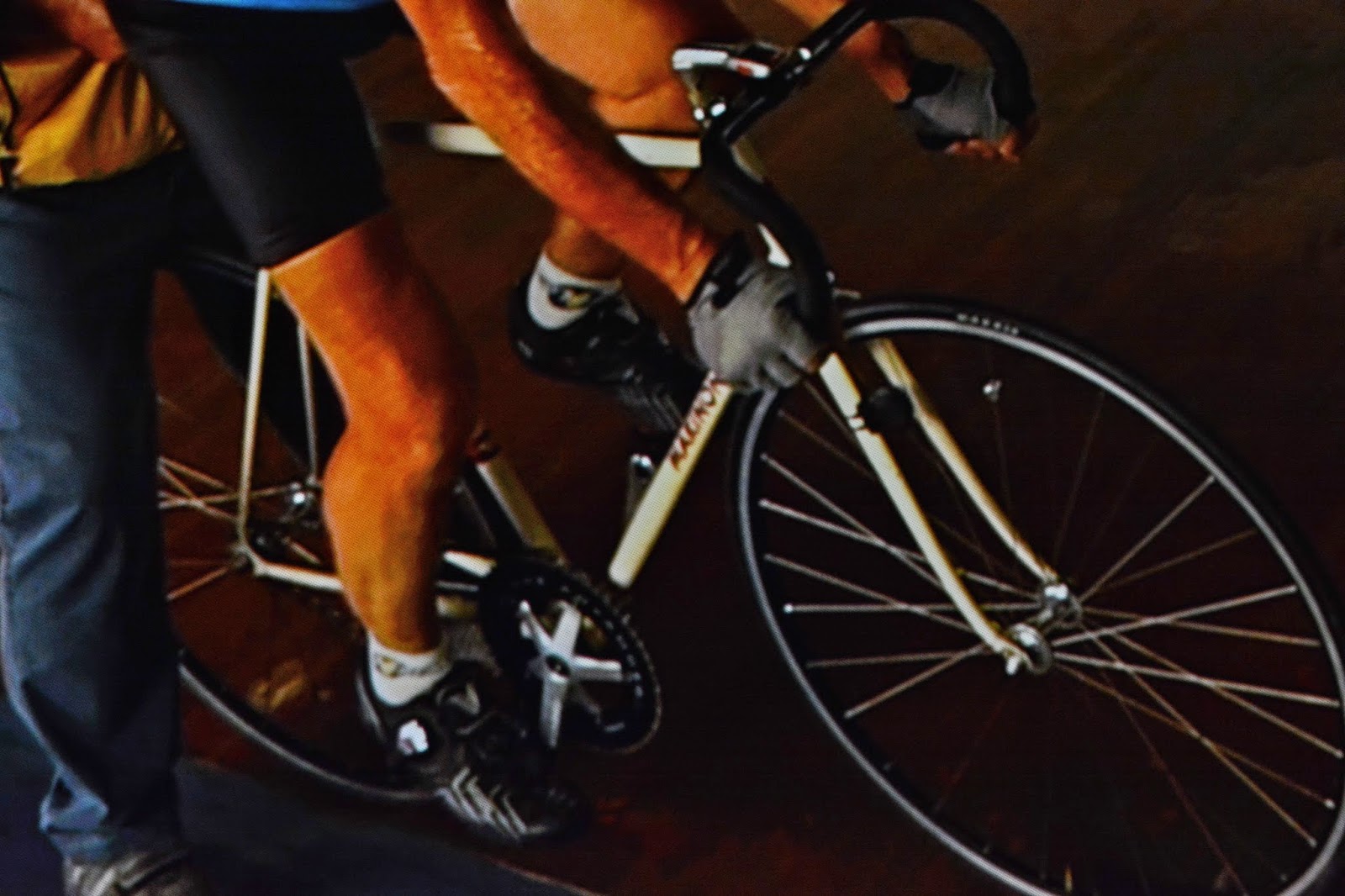 This movie did more, though, than allow us an intimate peek into an extraordinary life.  There were other elements that kept us riveted from beginning to end.  The reviews have mostly been stellar, but one person saw the confused time frames as a negative.  I feel that person missed the brilliance of those shifts in time.  We know the big day is coming, the time when Mr. Marinoni will go for the world record.  Every once in a while, the words take up the entire screen..  THREE MONTHS UNTIL THE RECORD-BREAKING ATTEMPT..  TWO WEEKS..  FIVE DAYS..  TWO HOURS...  I am not quoting exactly here, but trying to paint a picture of how invested we are in whether or not Mr. Marinoni will achieve his dream.  As the big day arrives and Mr. Marinoni gets on his bike, breathing slows in the theatre to the kind that makes no sound.  I, personally, had never heard of this particular style of competition.  One is alone on the track, riding with everything one's body and mind can give, for a full hour. There are no respites, no relief..  just push and push and then push some more to complete the greatest distance possible until every fibre of one's being is screaming for relief.  Mr. Marinoni joked that he could die in this attempt and that that would make a truly successful movie.  Tony employs a brilliant flashback strategy throughout the ride that I won't describe except to say that the most profound point of the movie is made.  We begin to see what he has learned about life through the making of this movie, even as we sit on the edge of our seats, wondering about the outcome.  You can find the details of that in a quick google, but the best would be to allow yourself the pleasure of seeing the story unfold in front of your eyes.  CBC has.. 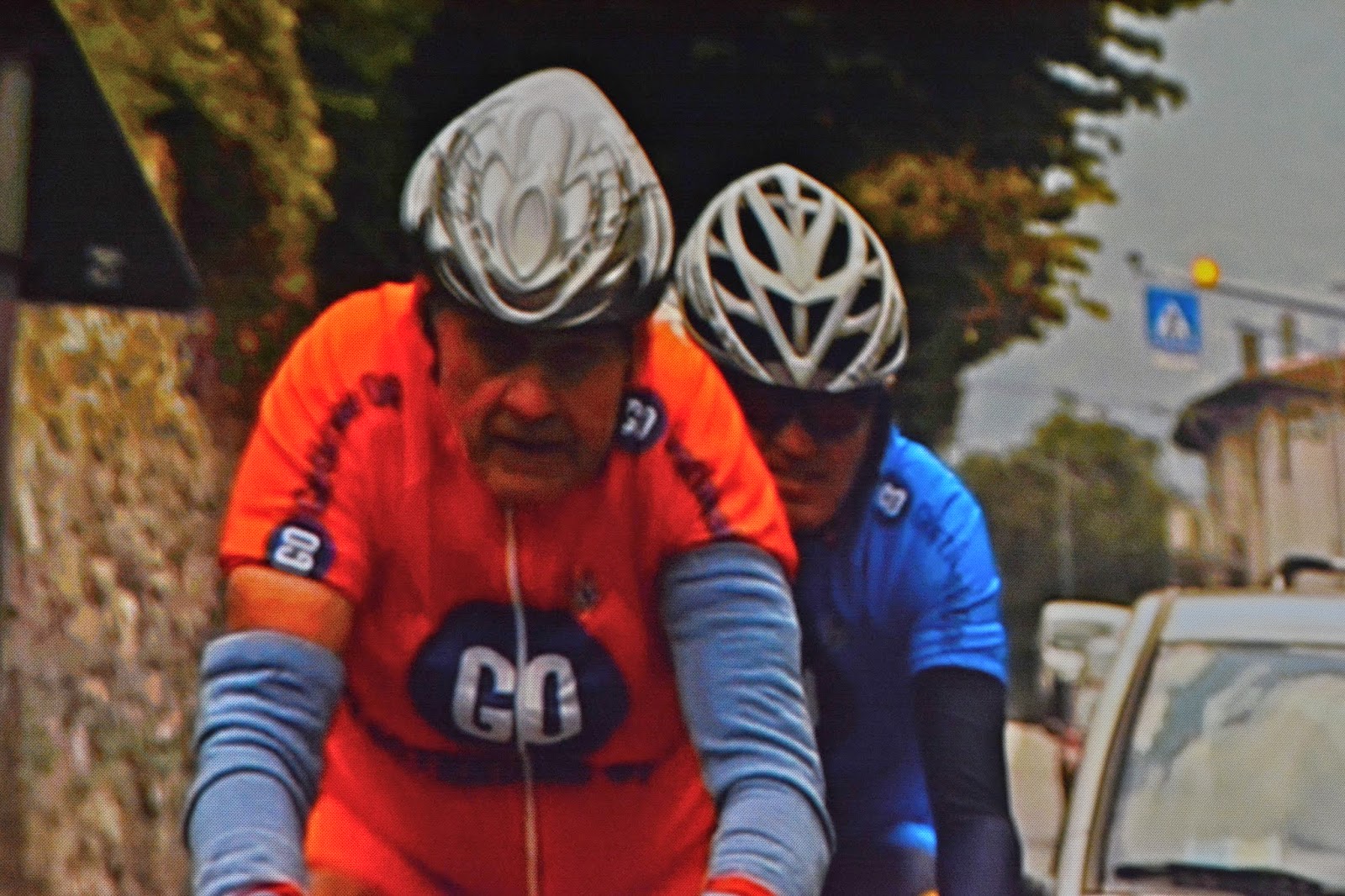 offered to buy the film, but if they did that, it wouldn't have the chance to hit the big theatres, and Tony Girardin knows he needs to bide his time for now.  All I can say is if you ever hear of a movie called Marinoni: Fire in the Frame showing anywhere near you, make the effort to go see it.  You do not need to be passionate about cycling or competitions.  All you need is an interest in what makes us tick as humans and I believe you will gain way more than your money's worth from the viewing.  I must add here that I haven't even touched on the deeply moving scenes reflecting on the relationship between Mr. Marinoni and Canadian cycling icon, Jocelyn Lovell.  Mr. Lovell's story would be well worth a movie in its own right, but somehow, Tony Girardin manages to do such beautiful justice to him within the framework of a focus on his main character, that Jocelyn Lovell is now one of those people who will sit forever in a front row seat of my brain.  I will be watching and hoping for more glimpses into his life in the future.  Sadly, I didn't get to see him for myself, though he did, through a huge effort, make it to the showing in Toronto.  But, can you imagine my thrill when, at the promised question-and-answer period after the film, I not only got to meet Tony Girardin but Mr.  Marinoni himself? 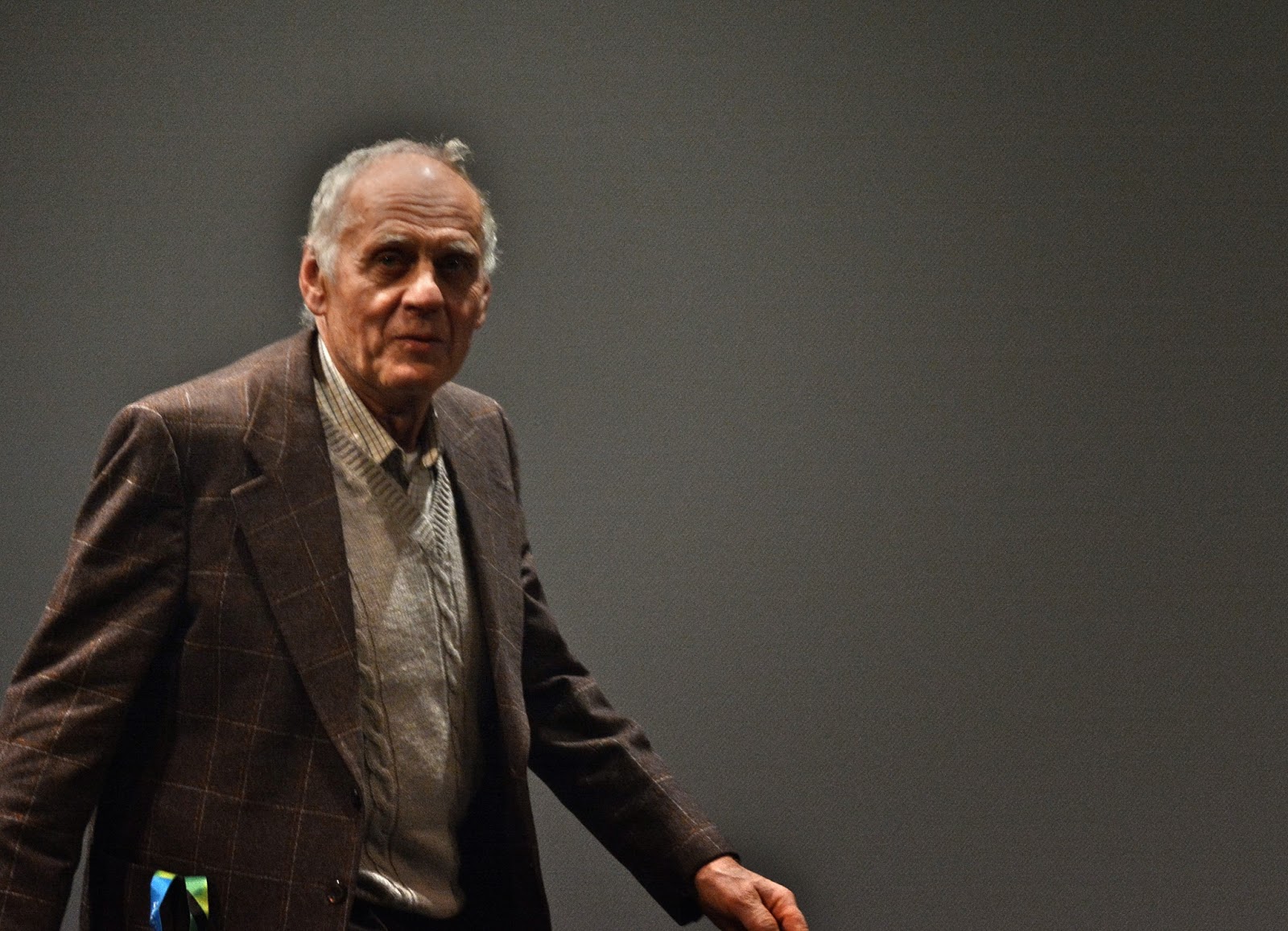 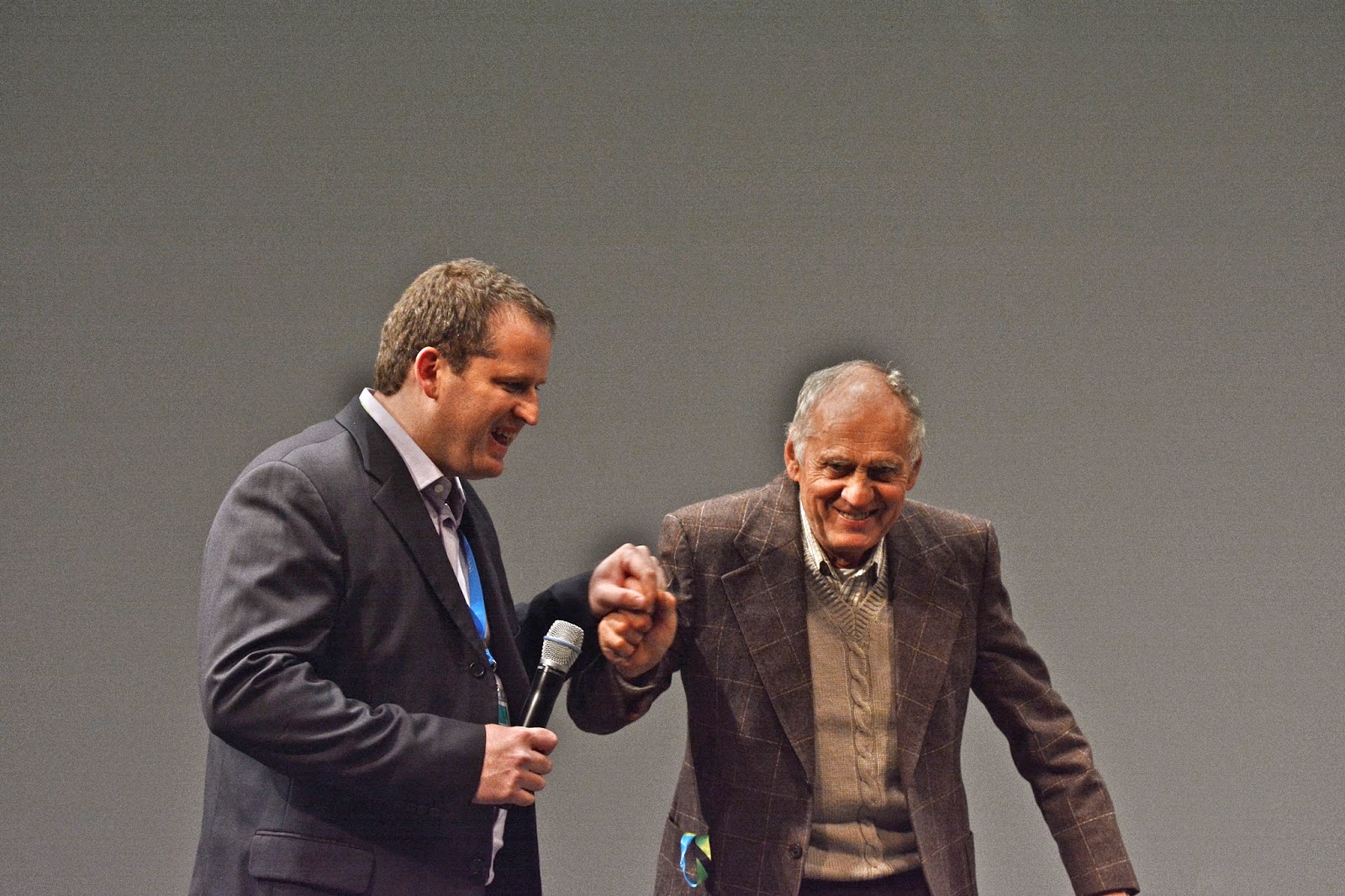 Though Mr. Marinoni speaks no English, he is fluent in French and, of course, Italian.  Somehow, the language barrier falls away.  There is enough translation, and one feels.. the spark in his eyes that Jocelyn Lovell described.  He has brought a bicycle frame with him, made for the 40th anniversary of his business and as they stand together, they appeal to the audience for help in deciding who should be the recipient of that frame.  There is talk of looking for the oldest person in the audience and a couple of suggestions are made.  Then, the gentleman you see.. 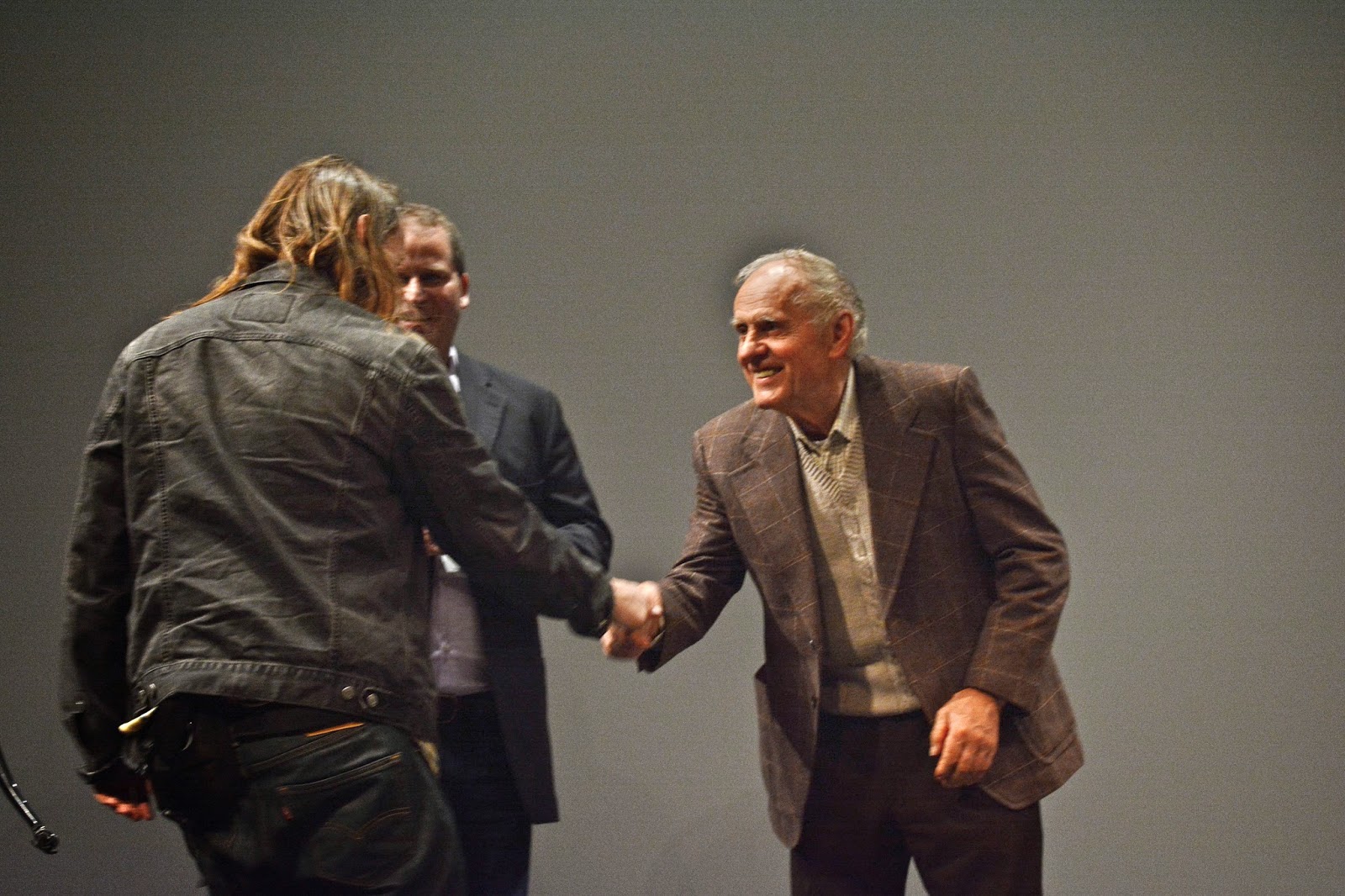 here calls out in a rather soft-spoken way, "My bike was stolen last night in front of this theatre.  Does that count?"  Tony asks the people in the audience what they think, and the applause tells the story.  The man is presented with a Marinoni bike frame.. 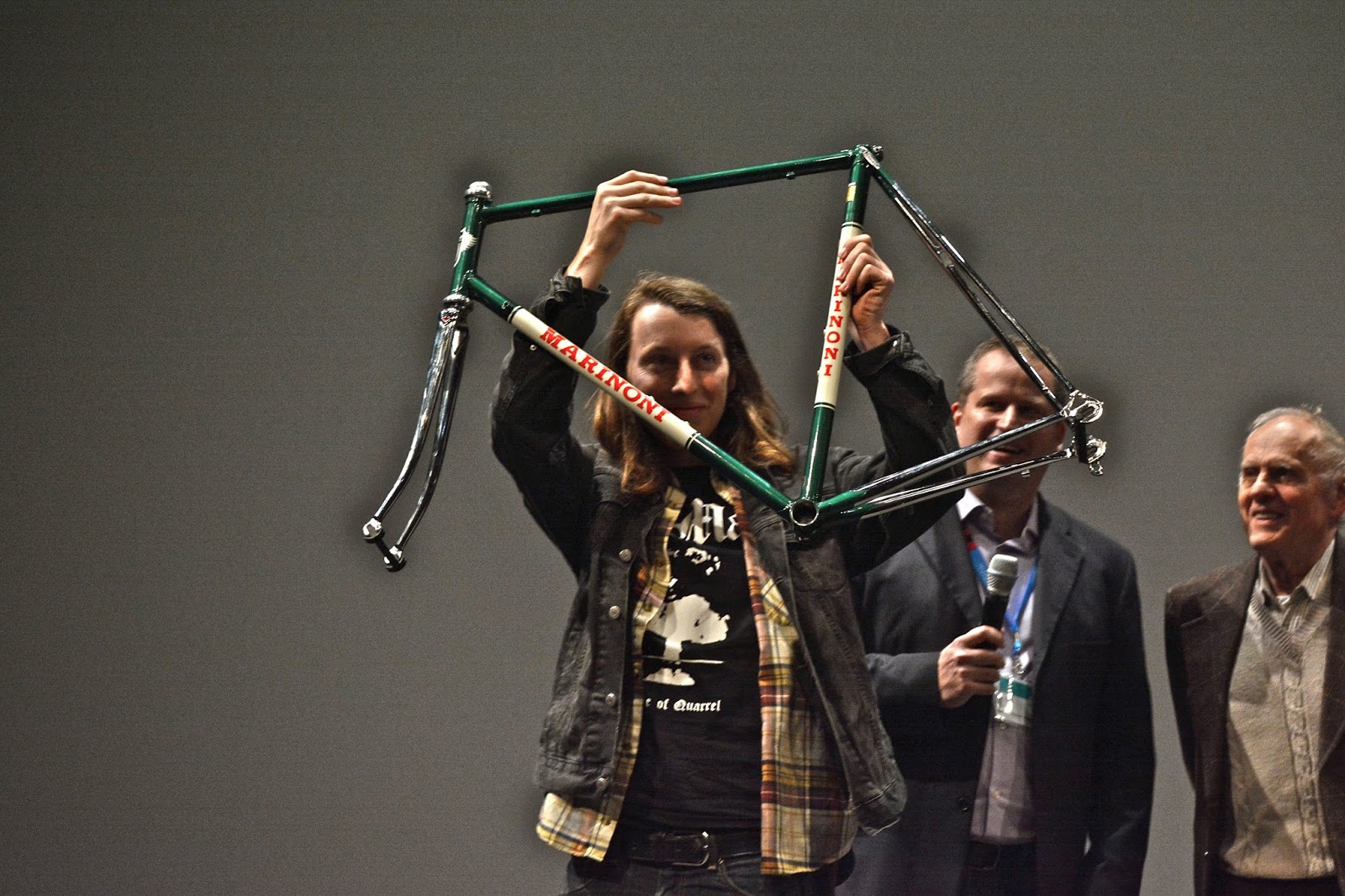 and there begins another story, one that I wish I could be privy to.  Will it change his life?  Perhaps send him in a new direction, or affirm one in the making?  Some of you may wonder why I have included the photos of Tupper at the beginning of the post, or why I show the photos of the building reflections before the movie started.  Those are my passions.  Whether I'm allowed a peak into the mind of a seagull, or into the work of an artist, construction worker, architect..  you name it..  that is what my camera gives me.  Tony Girardin and Giuseppe Marinoni have inspired me to continue to foster my own passions, no matter how old I get and no matter how insignificant they may at times seem in the face of world events.  I thank them for that, and I thank you for taking the time to share in my thoughts.  A very happy Monday to each one of you! 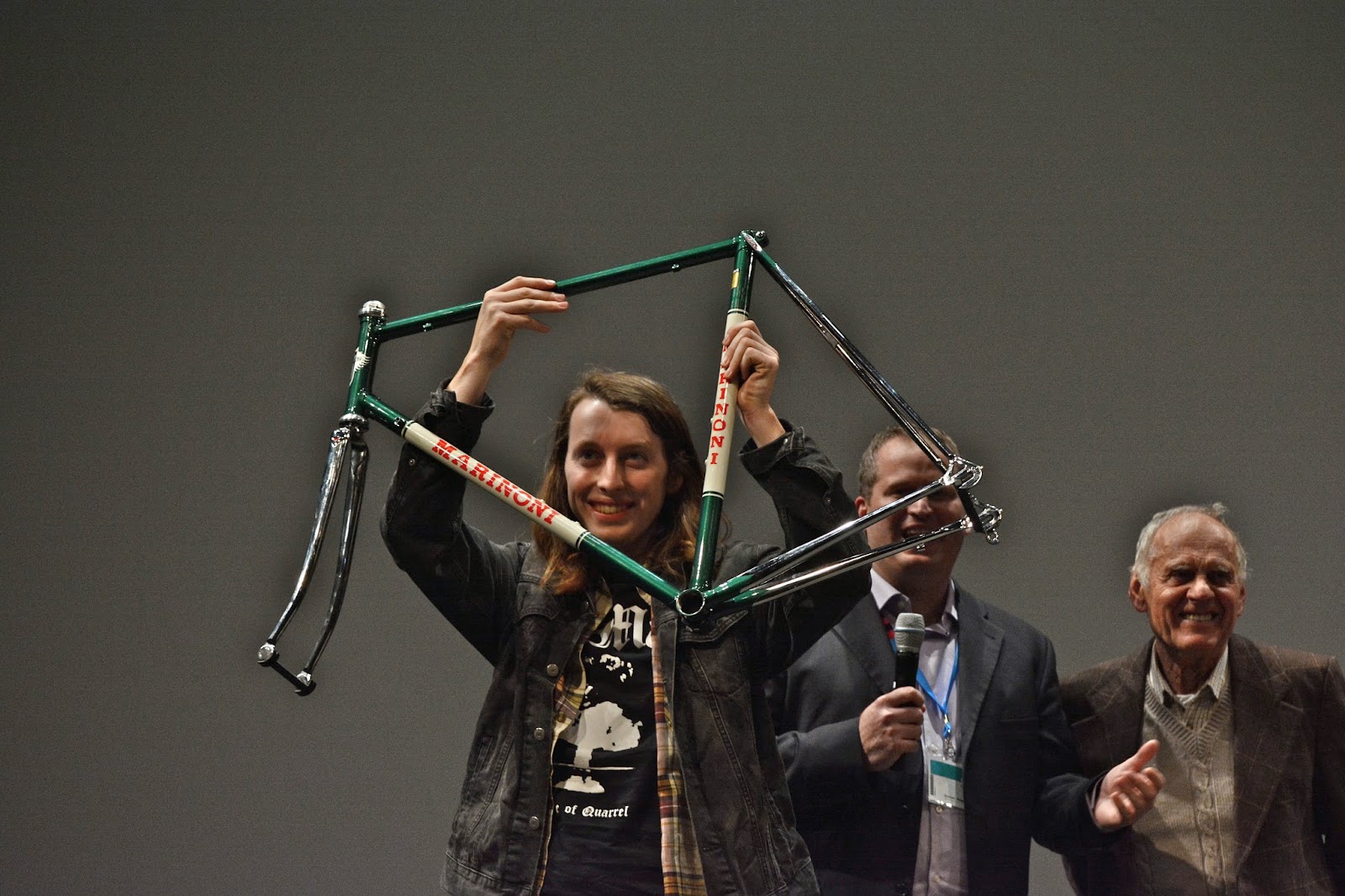