Some thoughts yesterday include a few that I'd like to share (in amongst the day's photos) with Our World Tuesday.  Many thanks to Arija, Gattina, Lady Fi, Sylvia, Sandy and Jennifer for carrying Klaus Peter's fine meme forward.

One of the best things about blogging is the wisdom that arrives from people around the world, and sometimes, it appears just when our minds are ready to take it in.  Last evening, I read Jim's blog and saw that he is exploring the teachings of Thich Nhat Hanh, as found in this book.  This quote on Jim's blog struck me as meaningful at the time, but this morning, after a good sleep, it really hits home:
"Around us, life bursts forth with miracles----
a glass of water, a ray of sunshine, a leaf, a caterpillar, a flower, laughter, raindrops.
If you live in awareness, it is easy to see miracles everywhere." 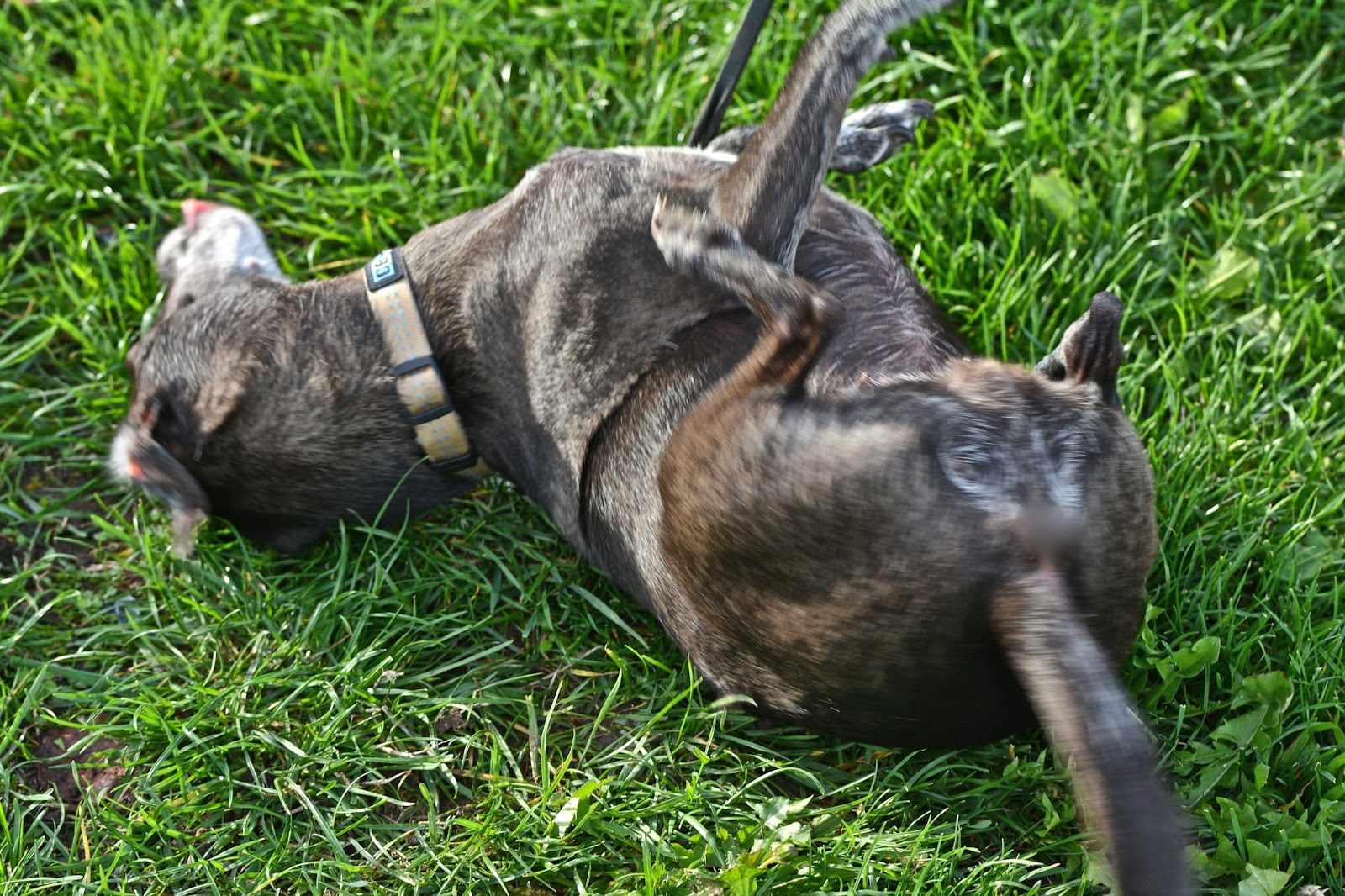 We rode our bikes along the seawall yesterday, stopping by this walkway-bridge that runs.. 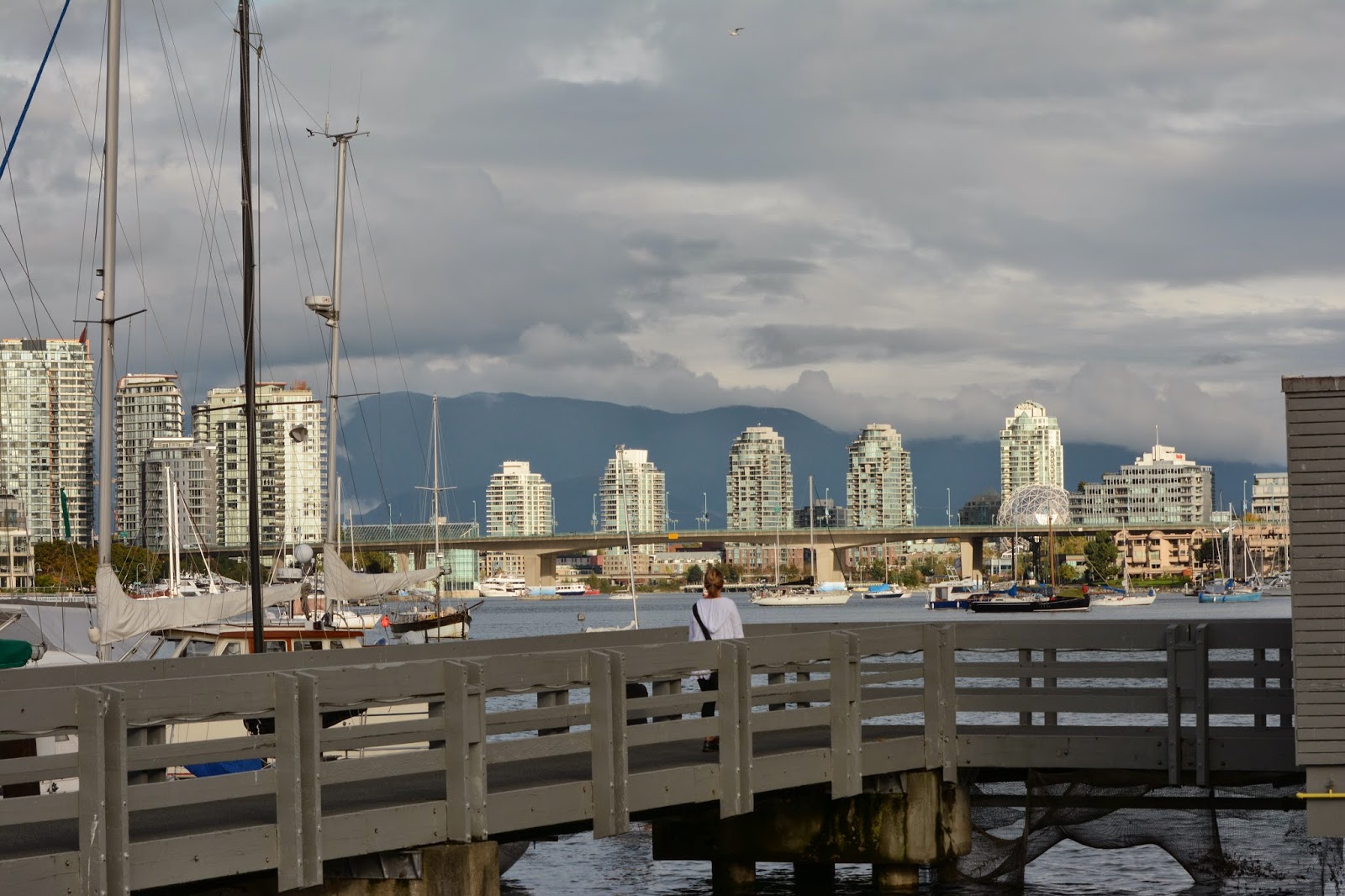 down the centre of False Creek.  Across the water, Granville Island's gardens and trees glistened. 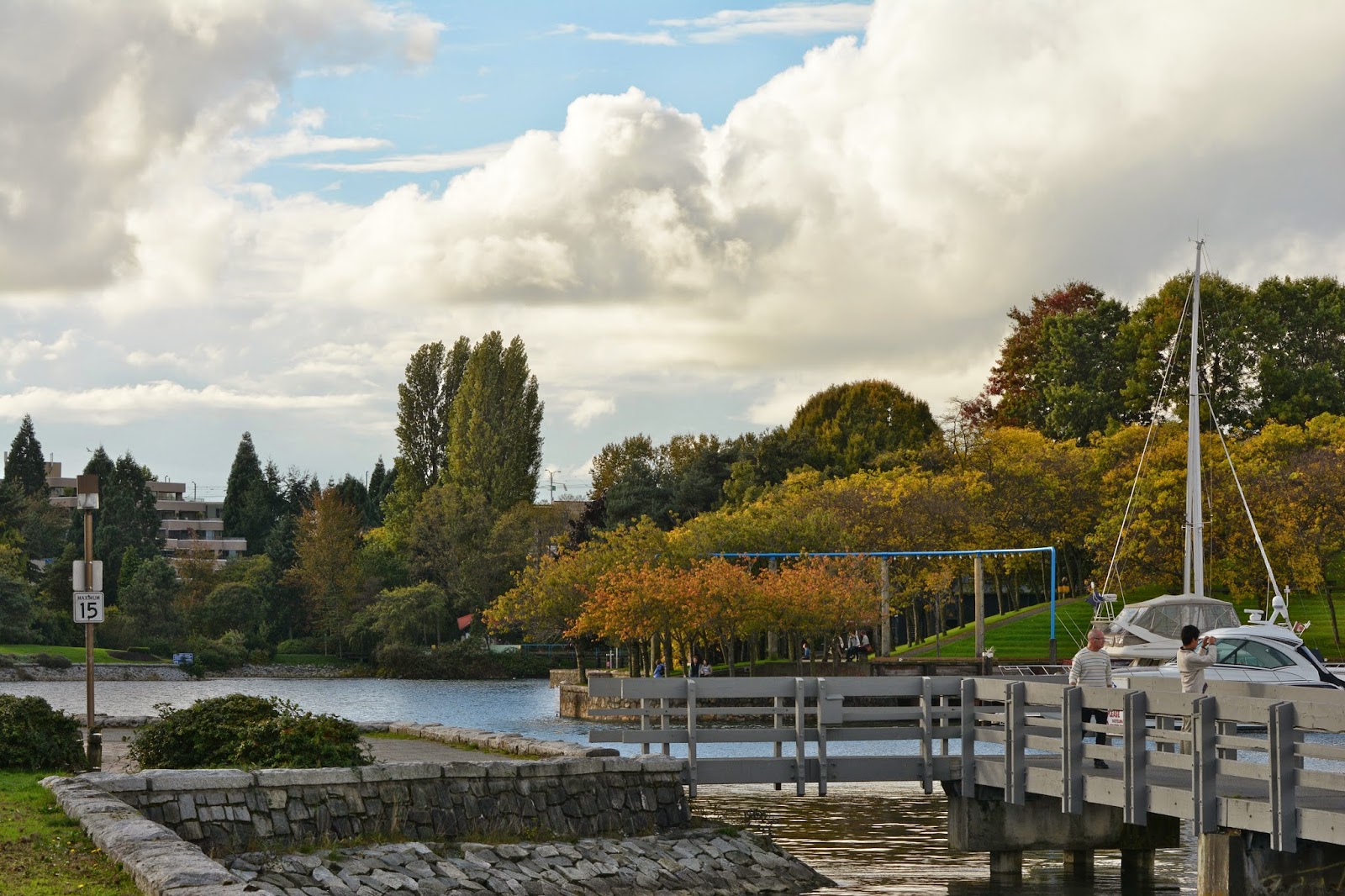 A small garden behind us.. 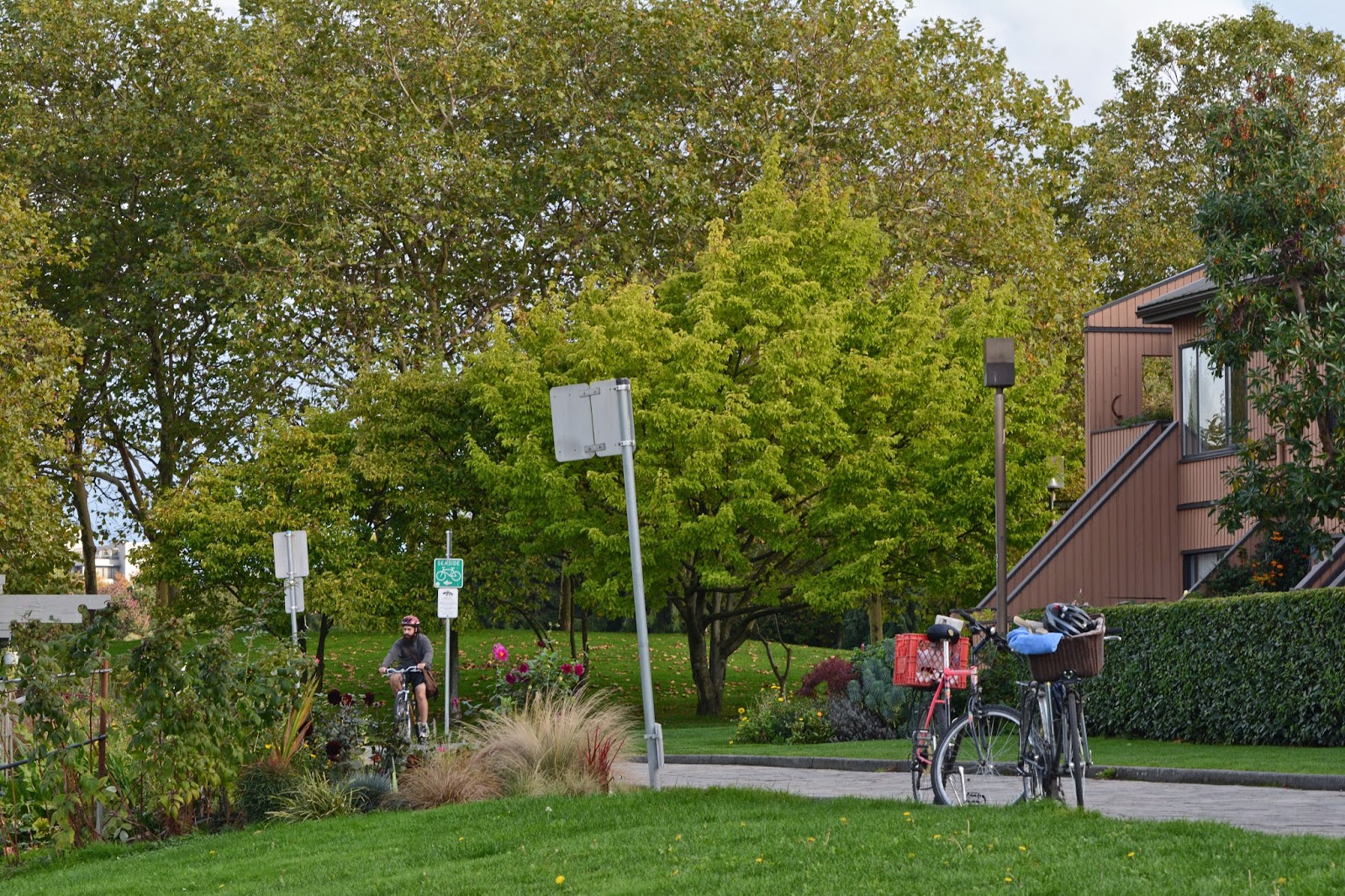 had many delights.  The back of this flower was as lovely as the front. 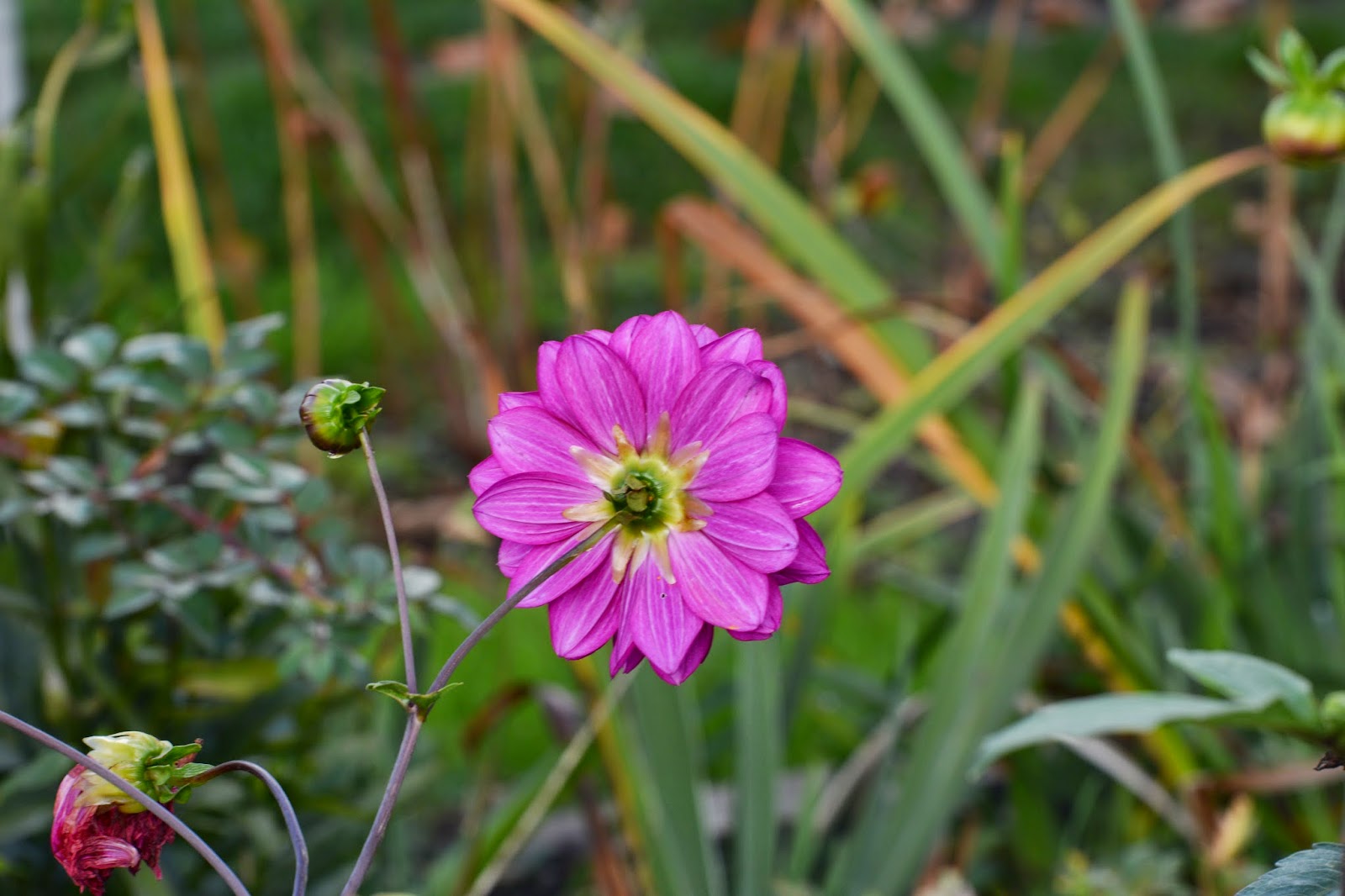 This bee had died, perhaps, just as it searched for nectar. 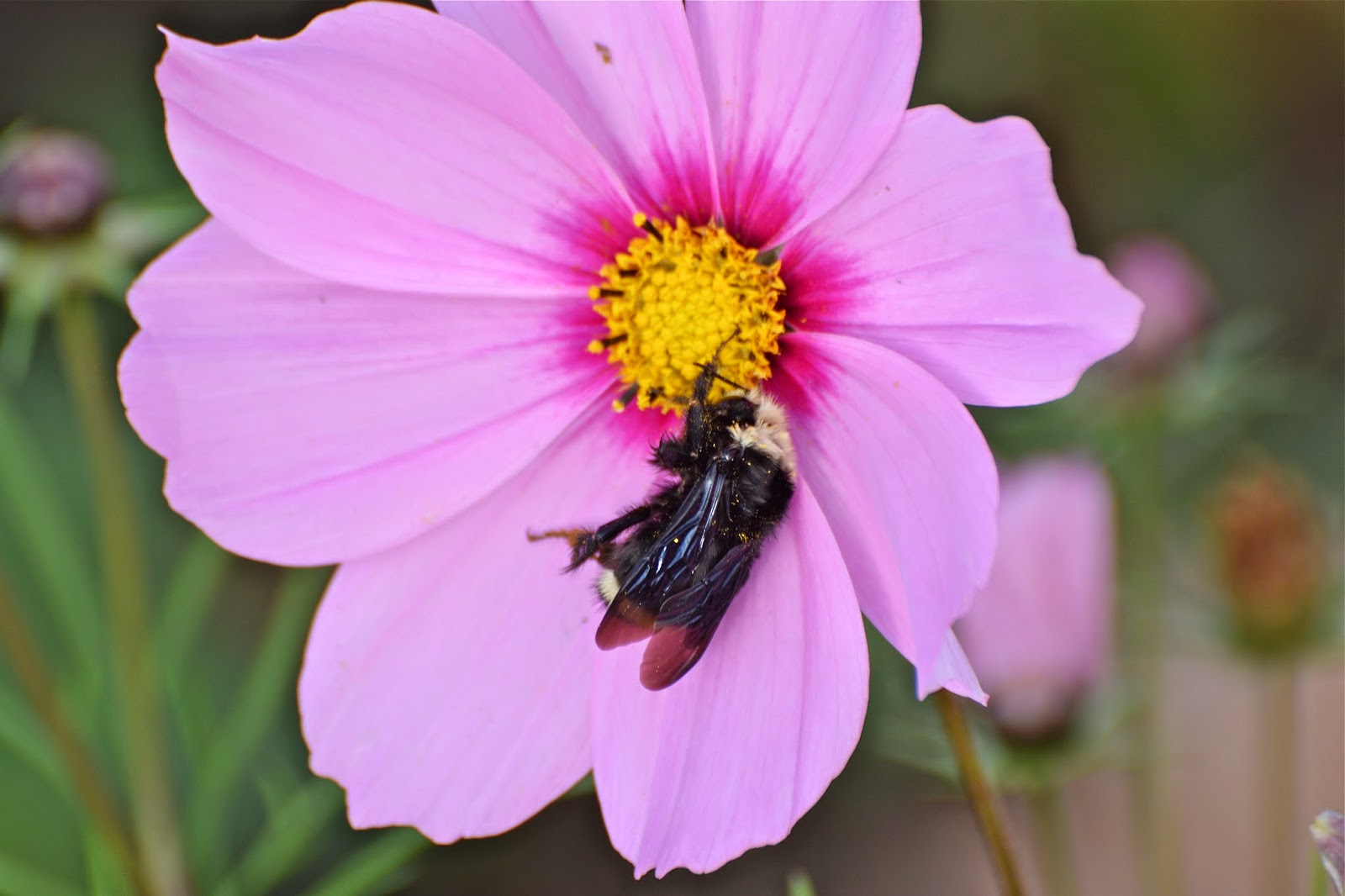 I looked at it closely.  It didn't seem to slip off the petal, even as a fairly strong breeze made the flower sway.  I'm not sure exactly what happened, but the image is beautiful to me. 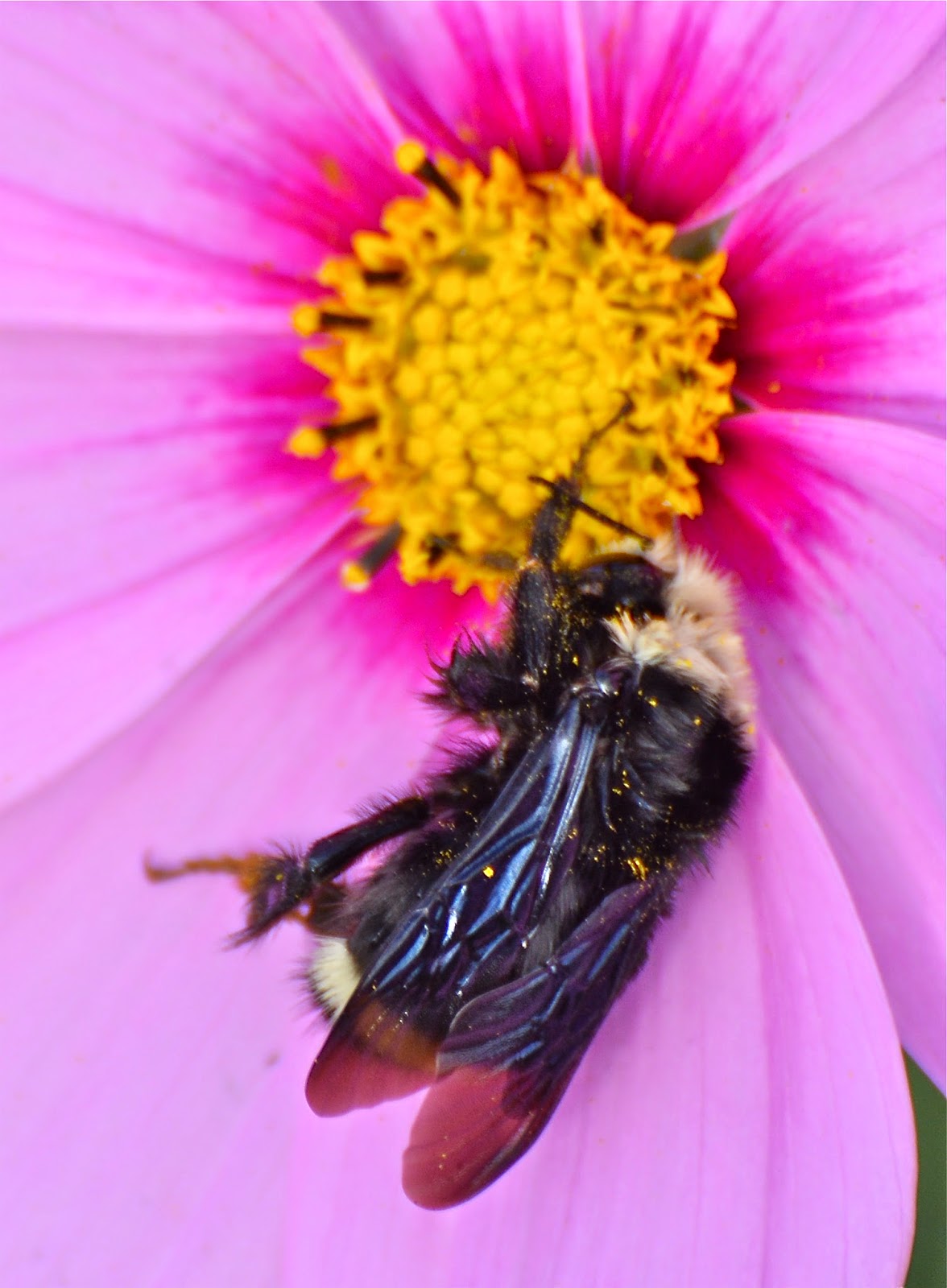 It was Bill who chose the stopping place as we traveled along on our bikes. I think he was.. 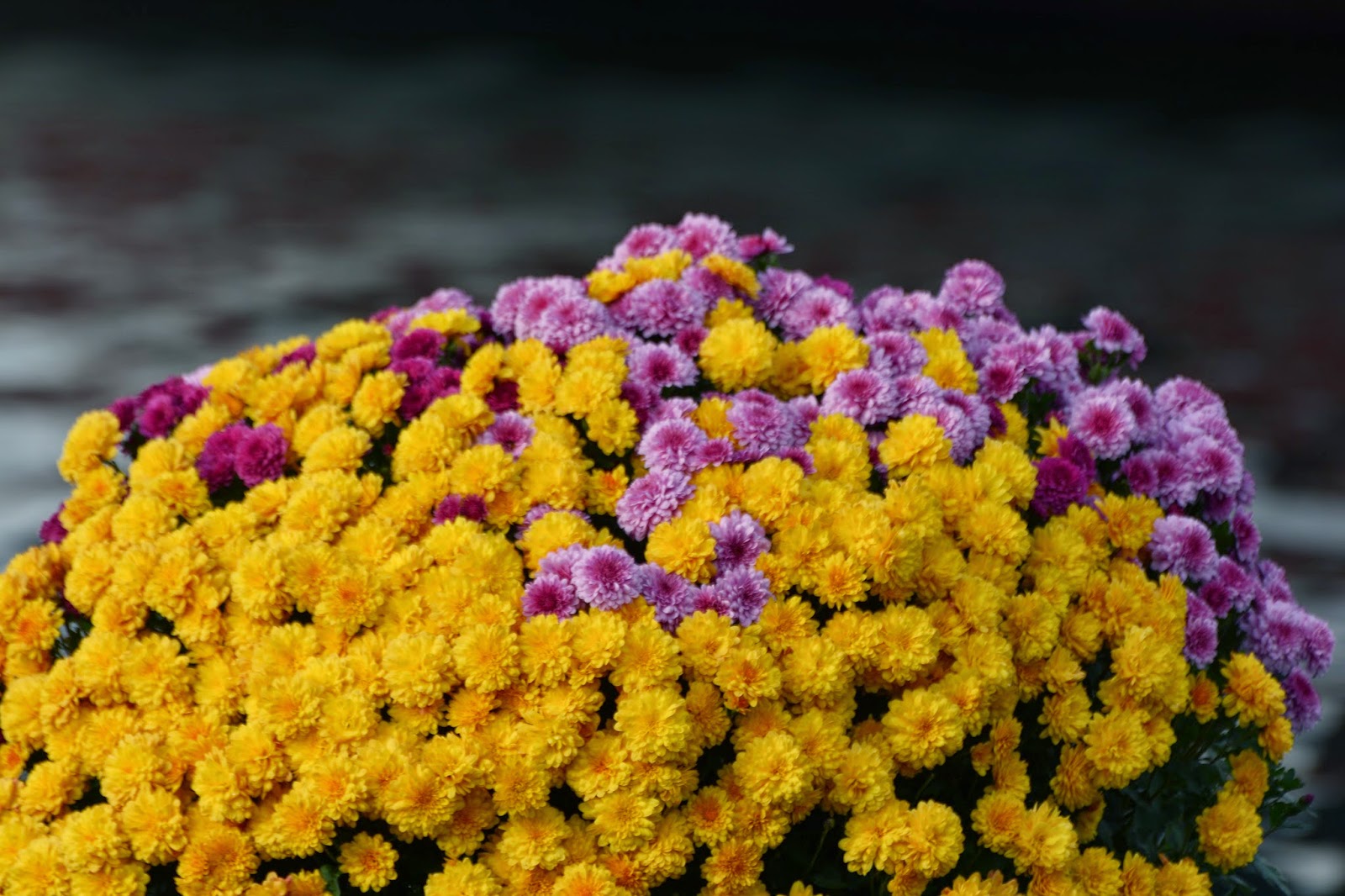 most taken with this basket of flowers. 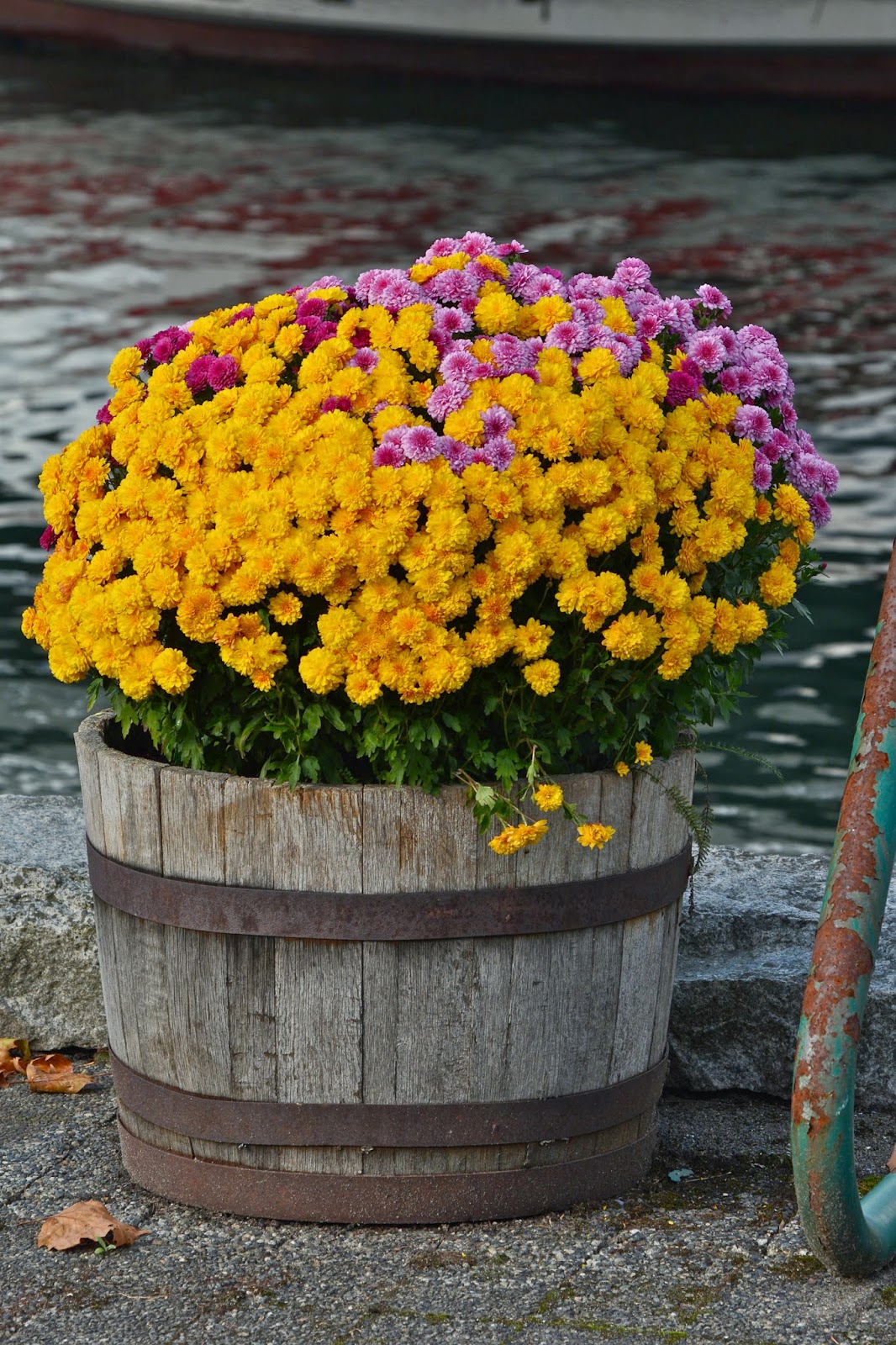 The long strip of grass was perfect for Black Jack to have a run, 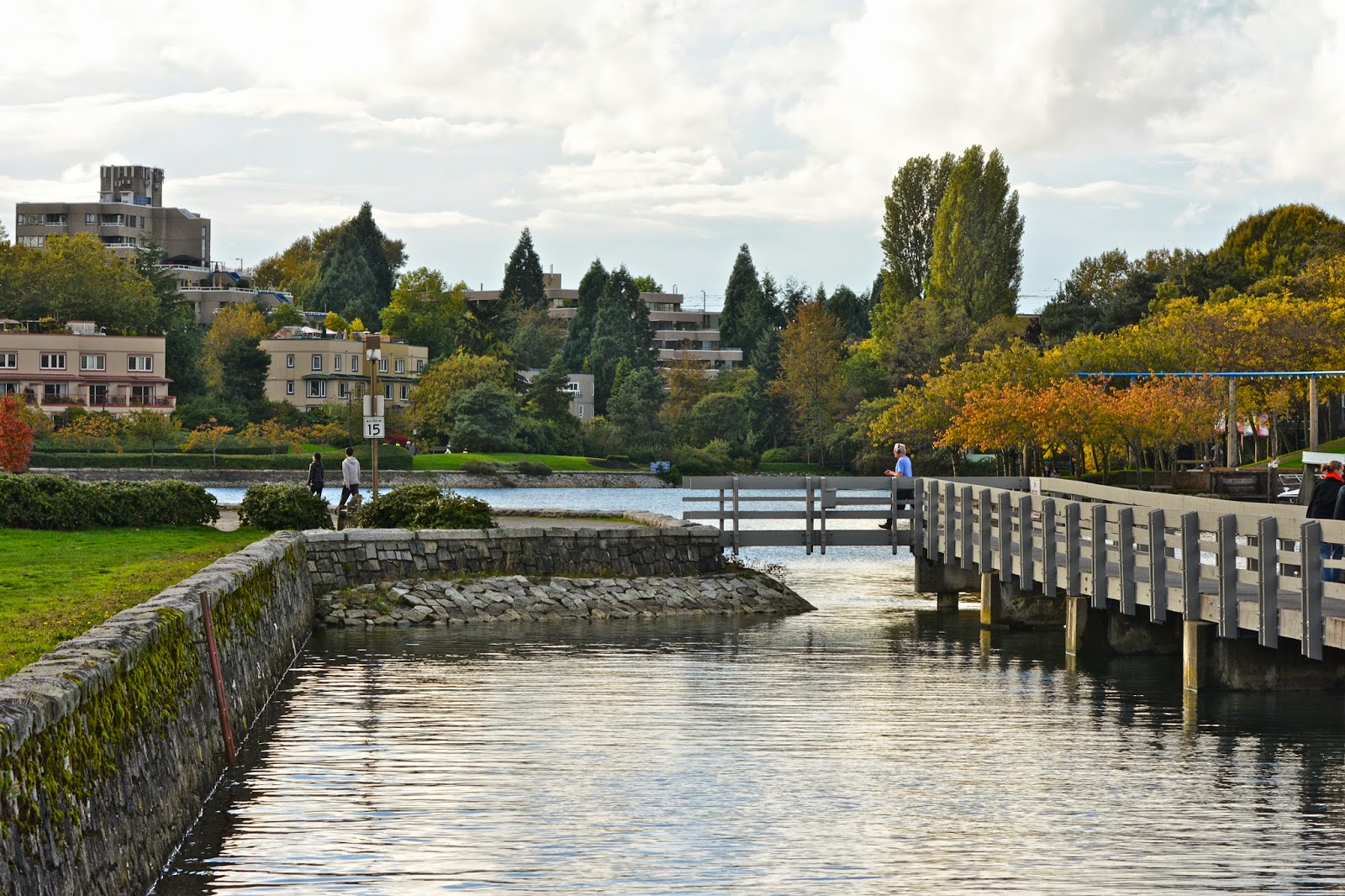 and I enjoyed the reflections in the water.. 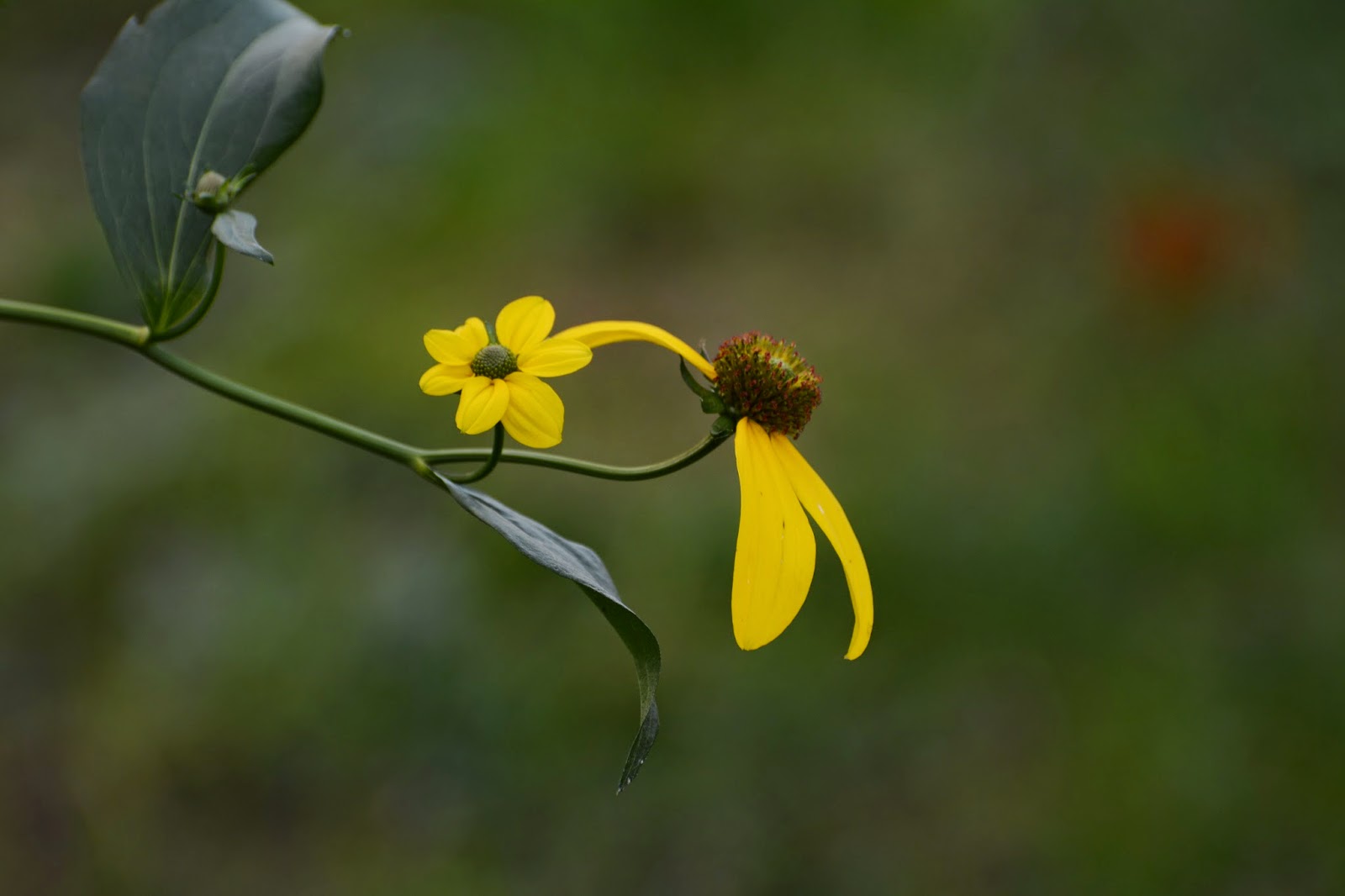 "Each human being is a multiplicity of miracles. Eyes that see thousands of colors,
shapes, and forms; ears that hear a bee flying or a thunderclap;
a brain that ponders a speck of dust as easily as the entire cosmos;
a heart that beats in rhythm with the heartbeat of all beings." 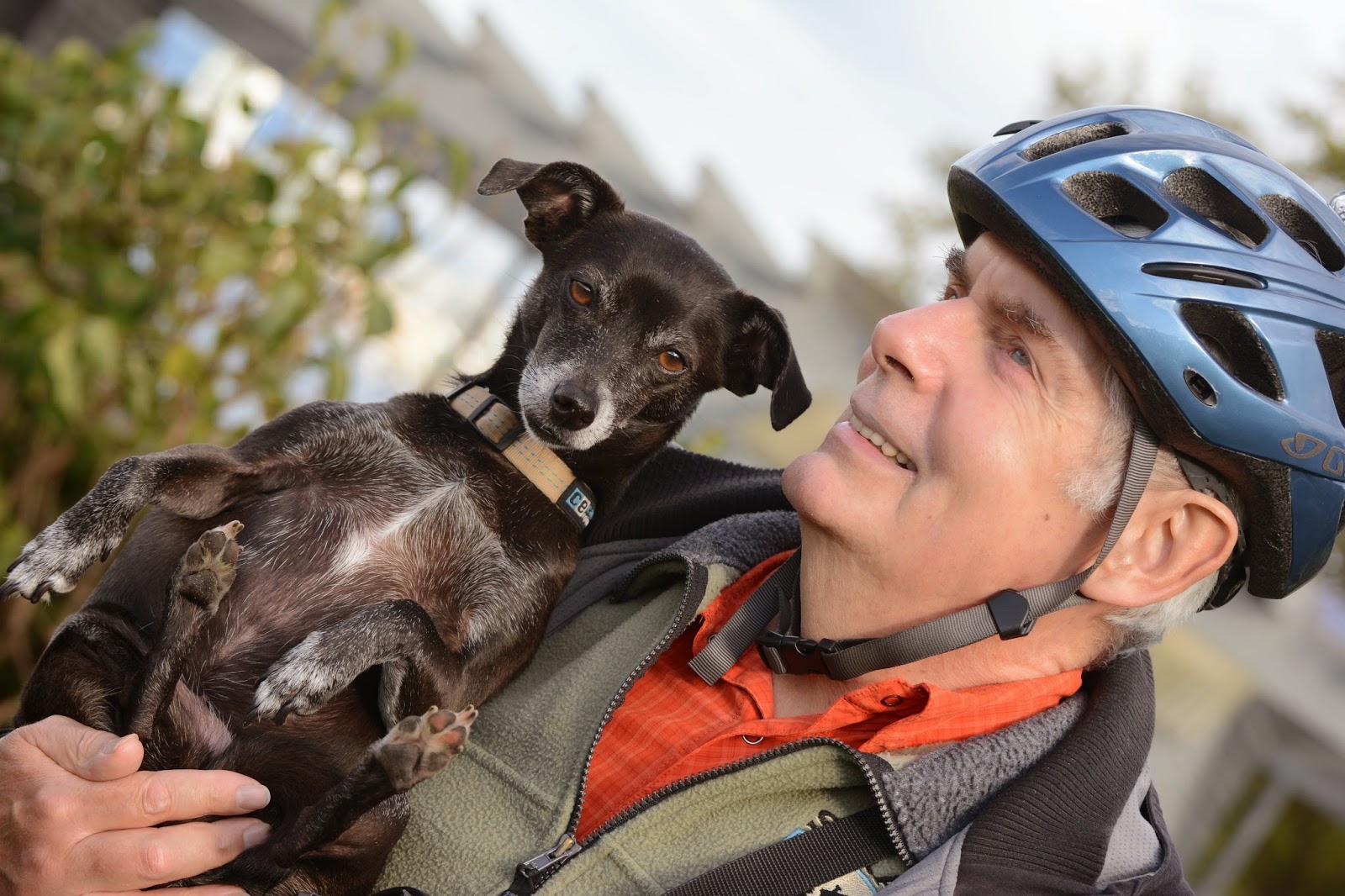 The quote above is also from Jim's post.  Though it seems audacious to altar those words in any way, I might change the word "human" to "living" being.  One brilliant red leaf floated in the water.. 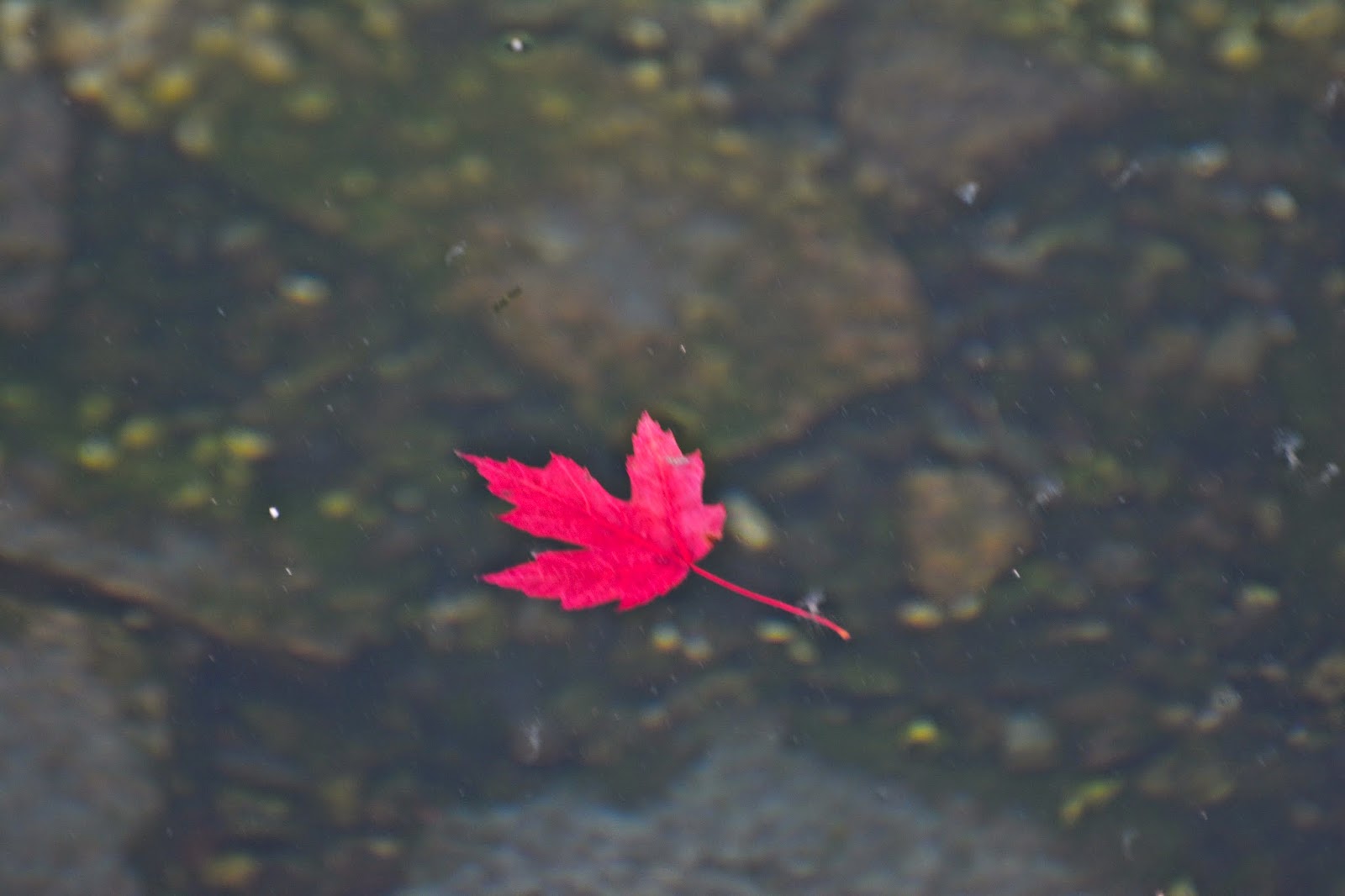 as we began happy Black Jack's.. 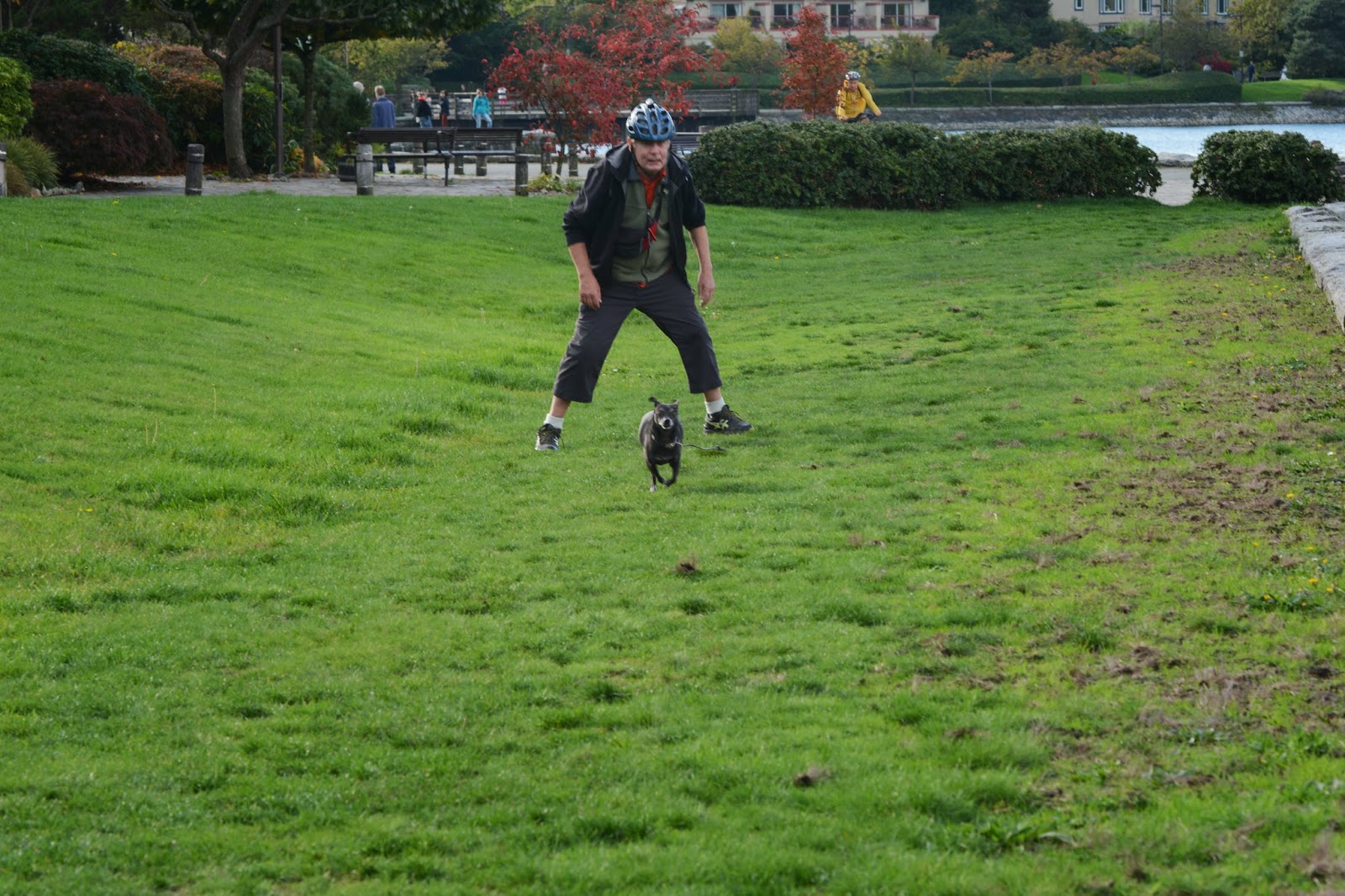 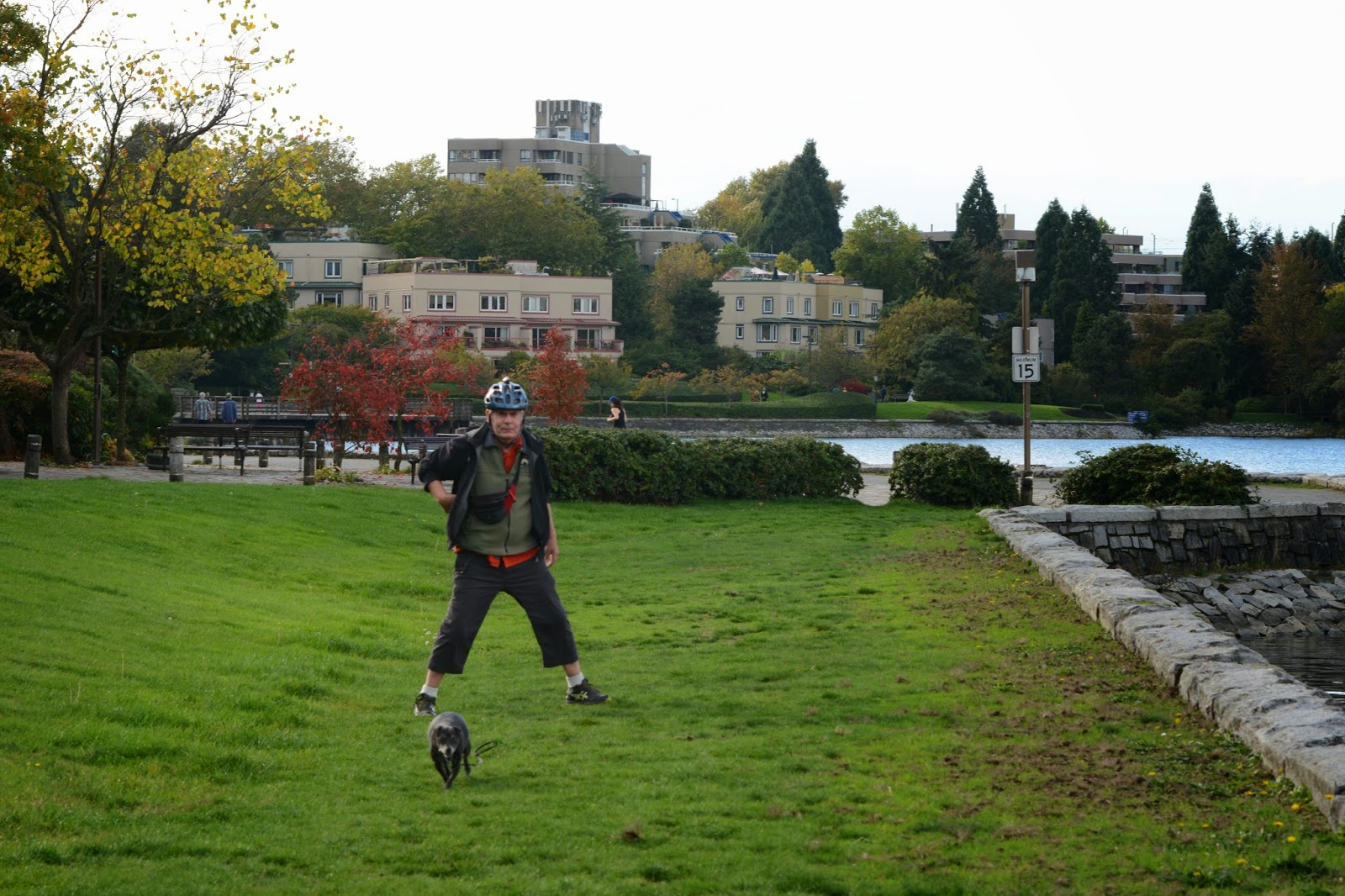 She was full of energy, something I never take for granted. 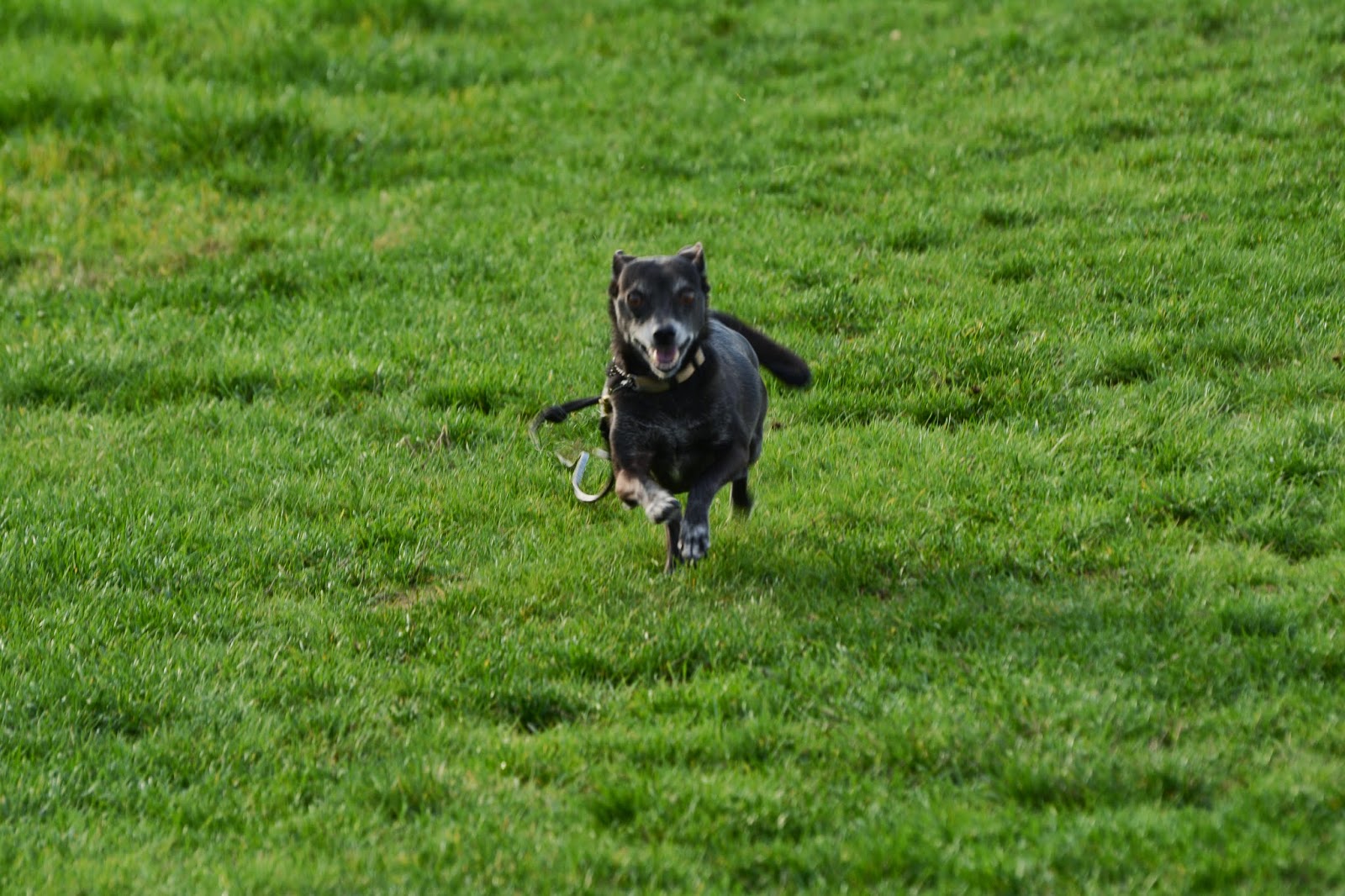 Colour across the water, a couple in deep conversation,

the two bridges caught in one shot (as in yesterday's post, but this time, the Granville is first and the Burrard behind it), 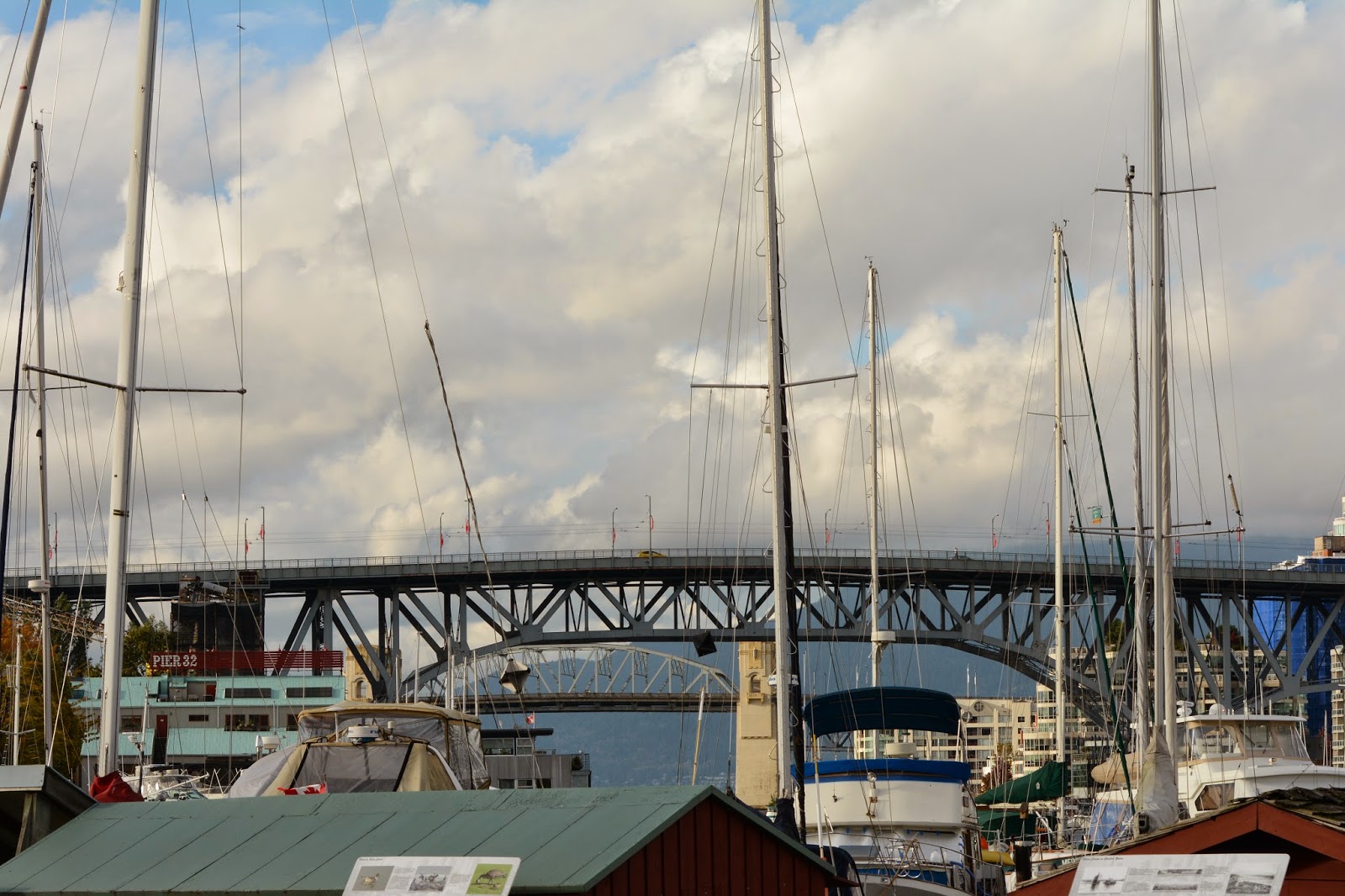 topsy-turvy angles as perspective put the Granville directly over the Burrard, 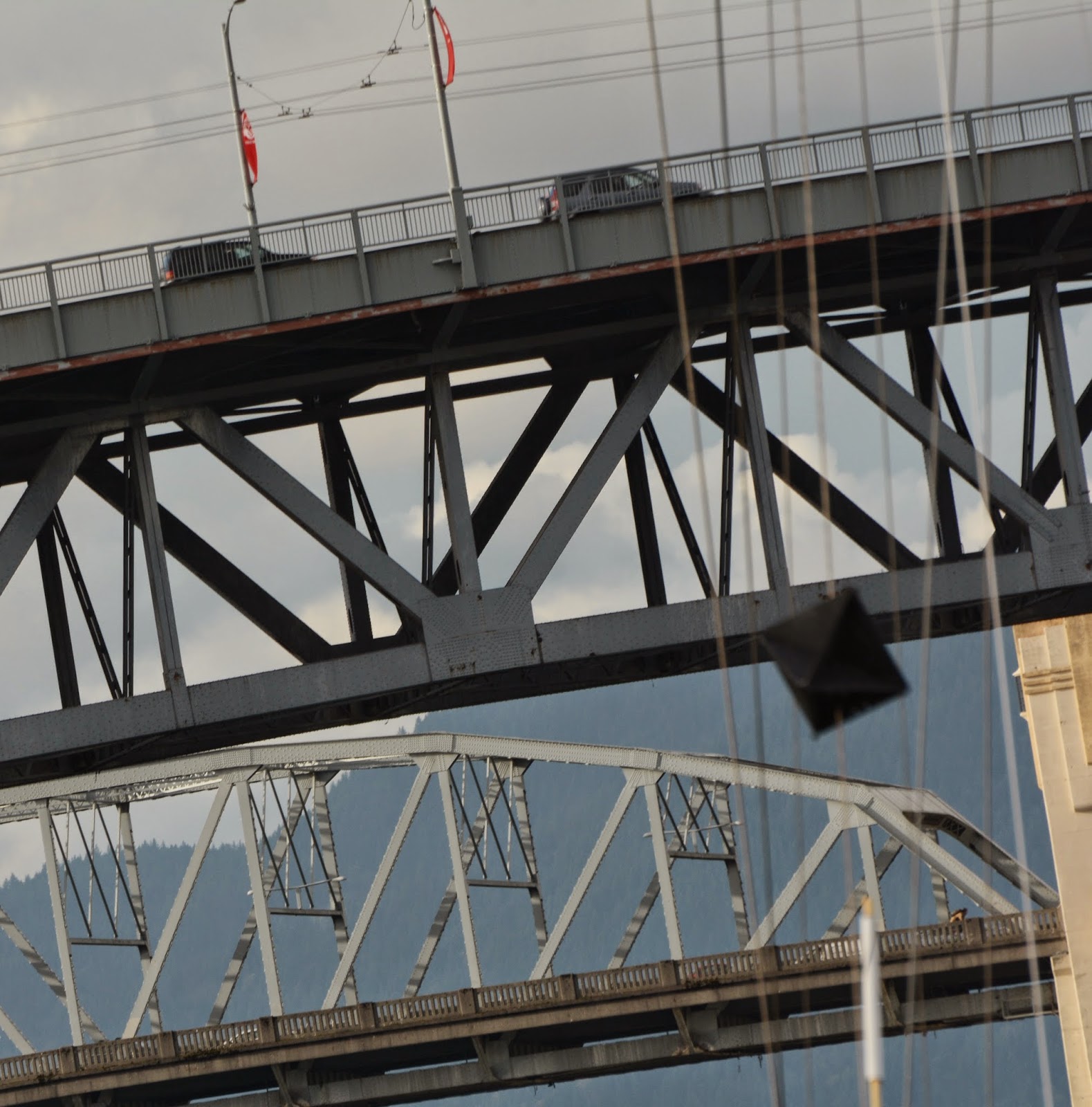 topsy-turvy legs dangling and pointing every which way, 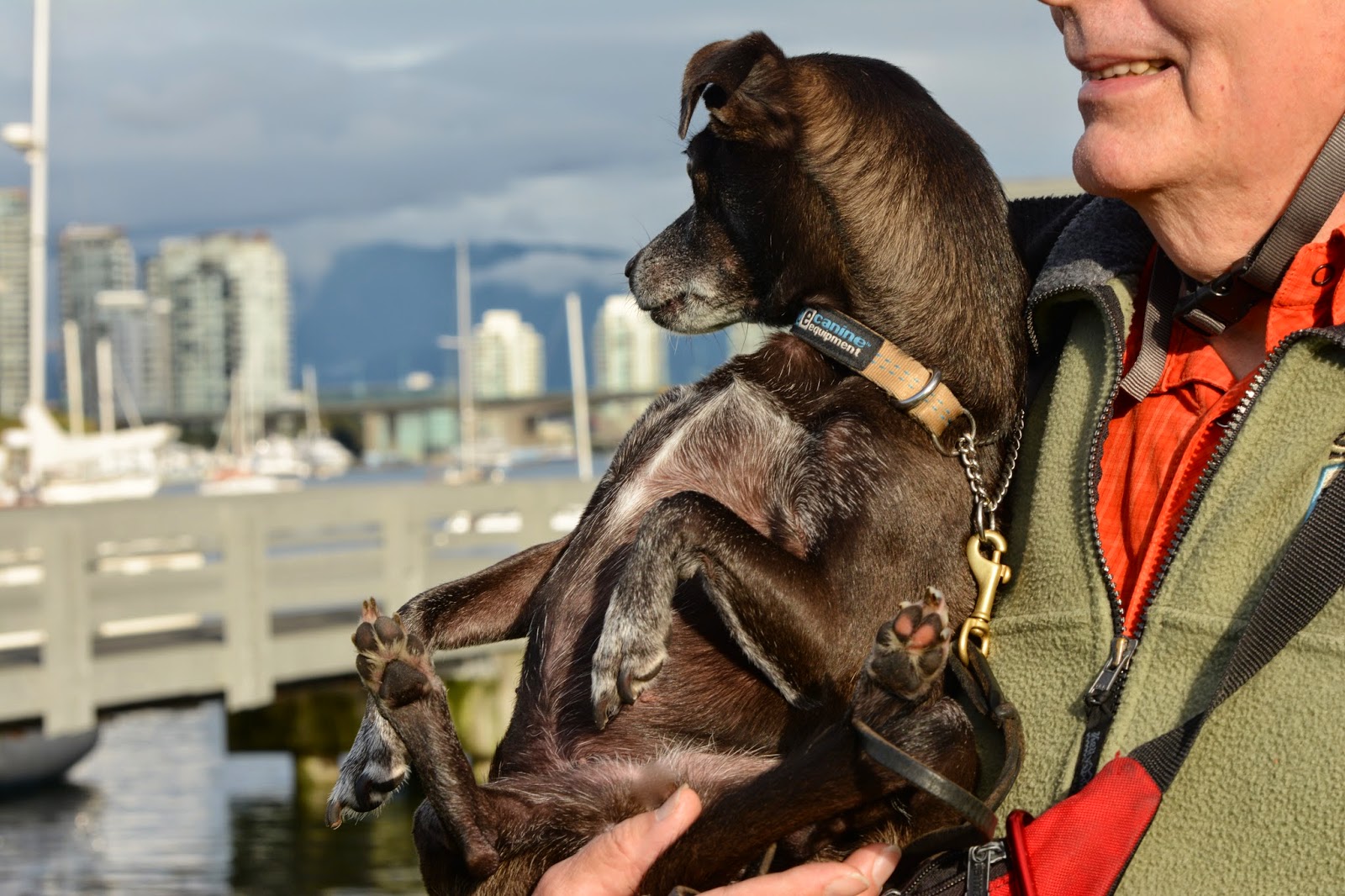 and Black Jack as content as any dog could be with her day and her Bill. 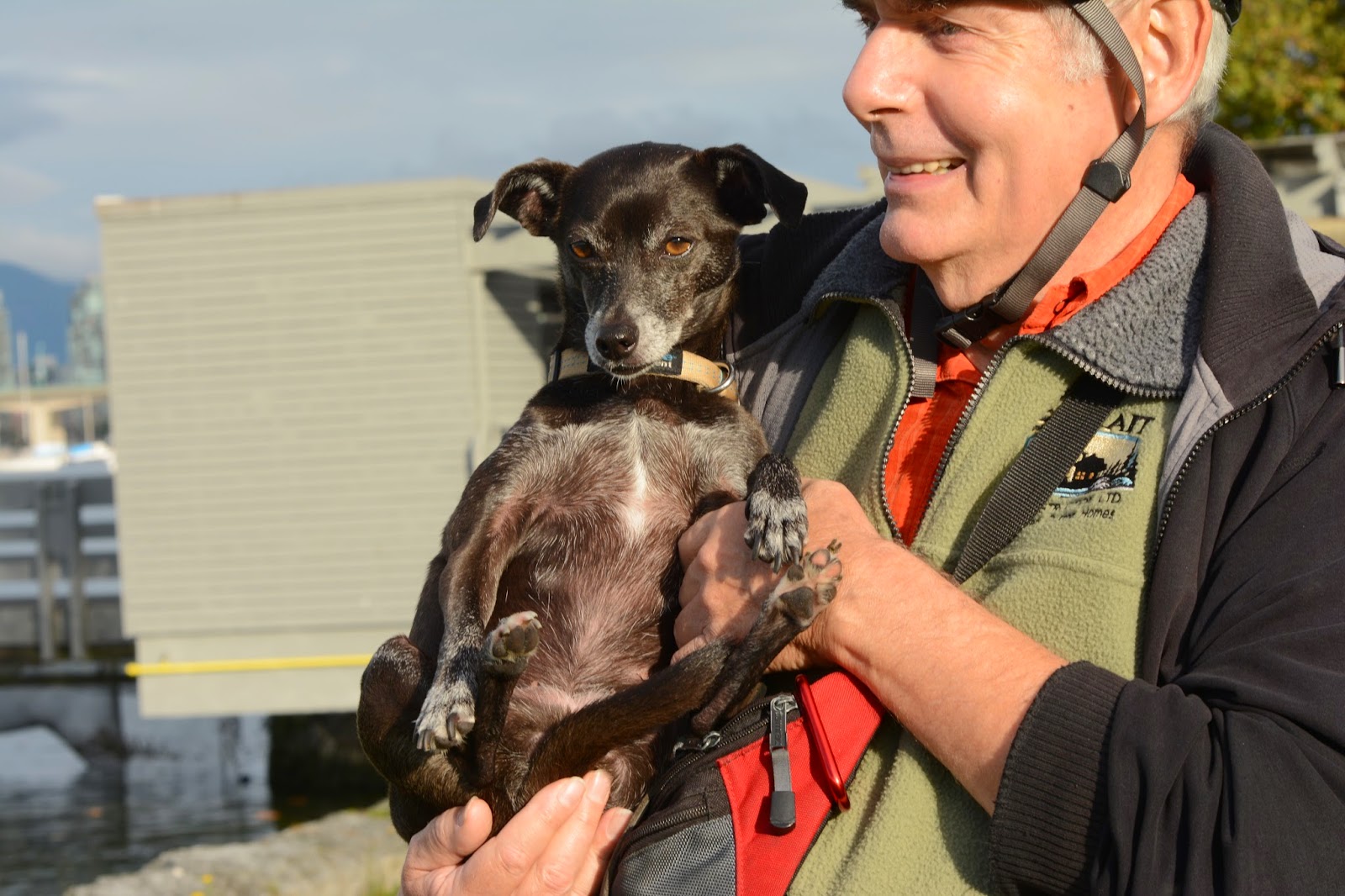 We got back on our bikes and rode to Granville Island where I again.. 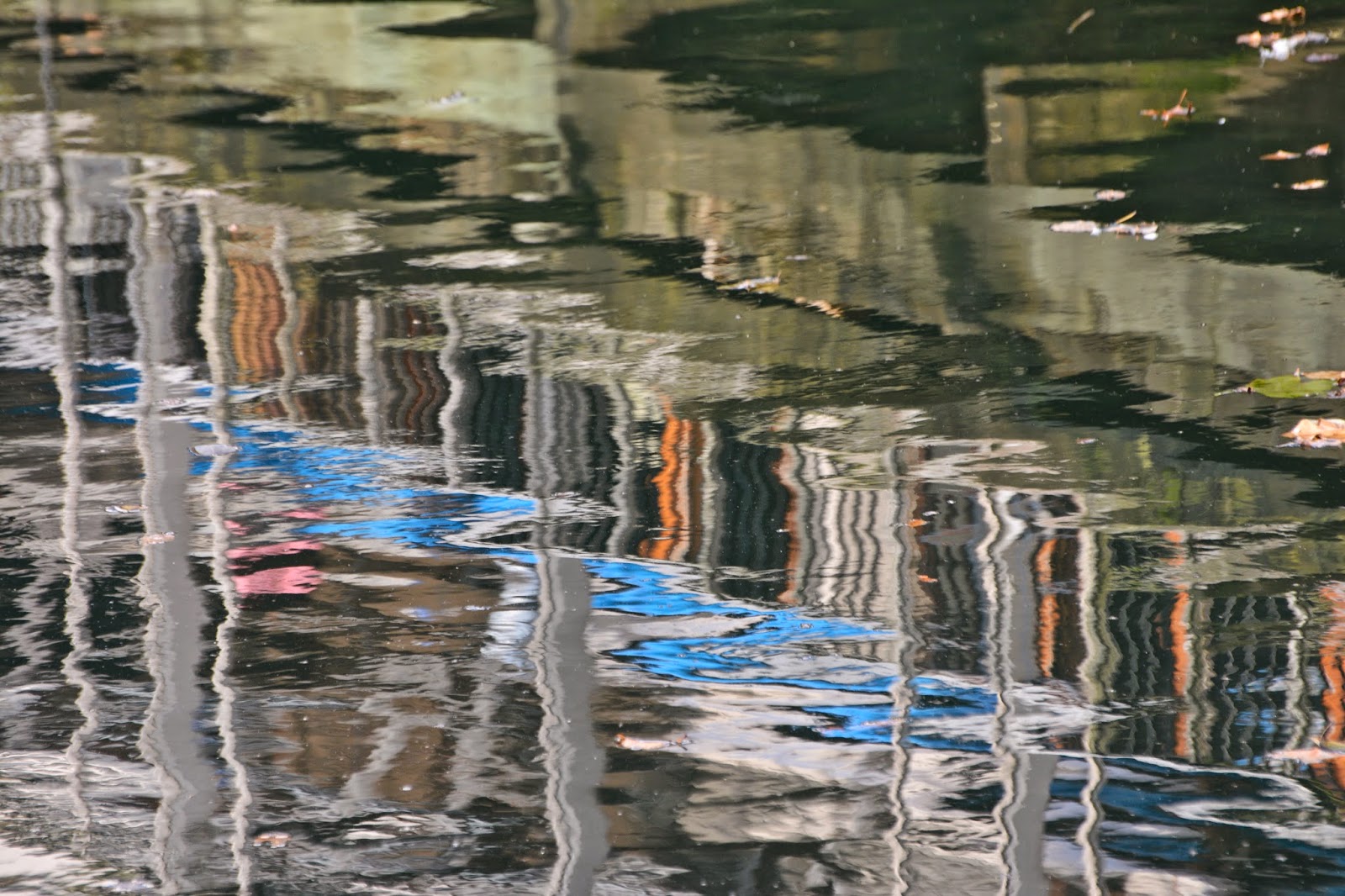 and again spotted some floating leaves. 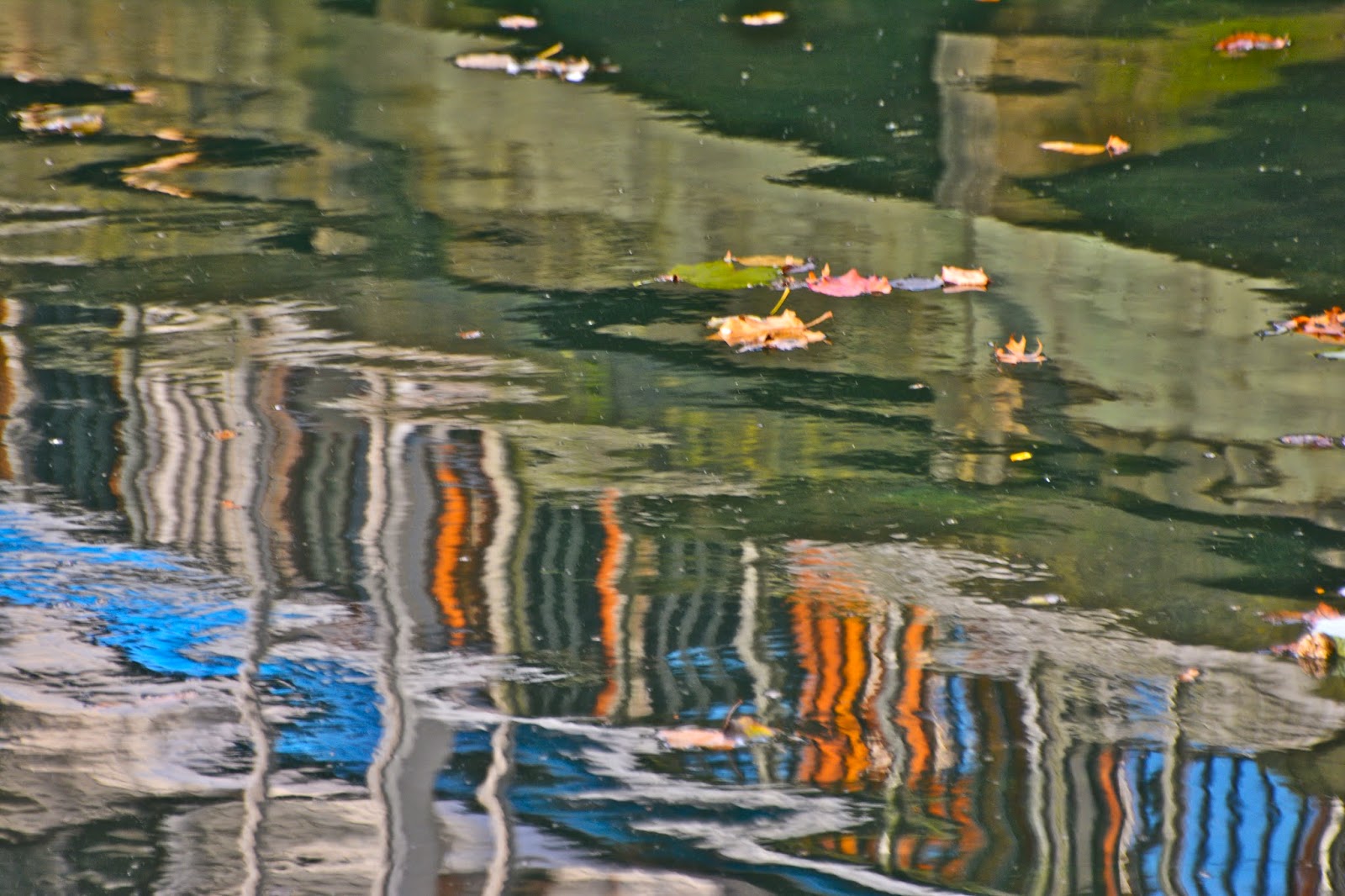 Here is the bigger picture.  It is a scene I come back to again and again. 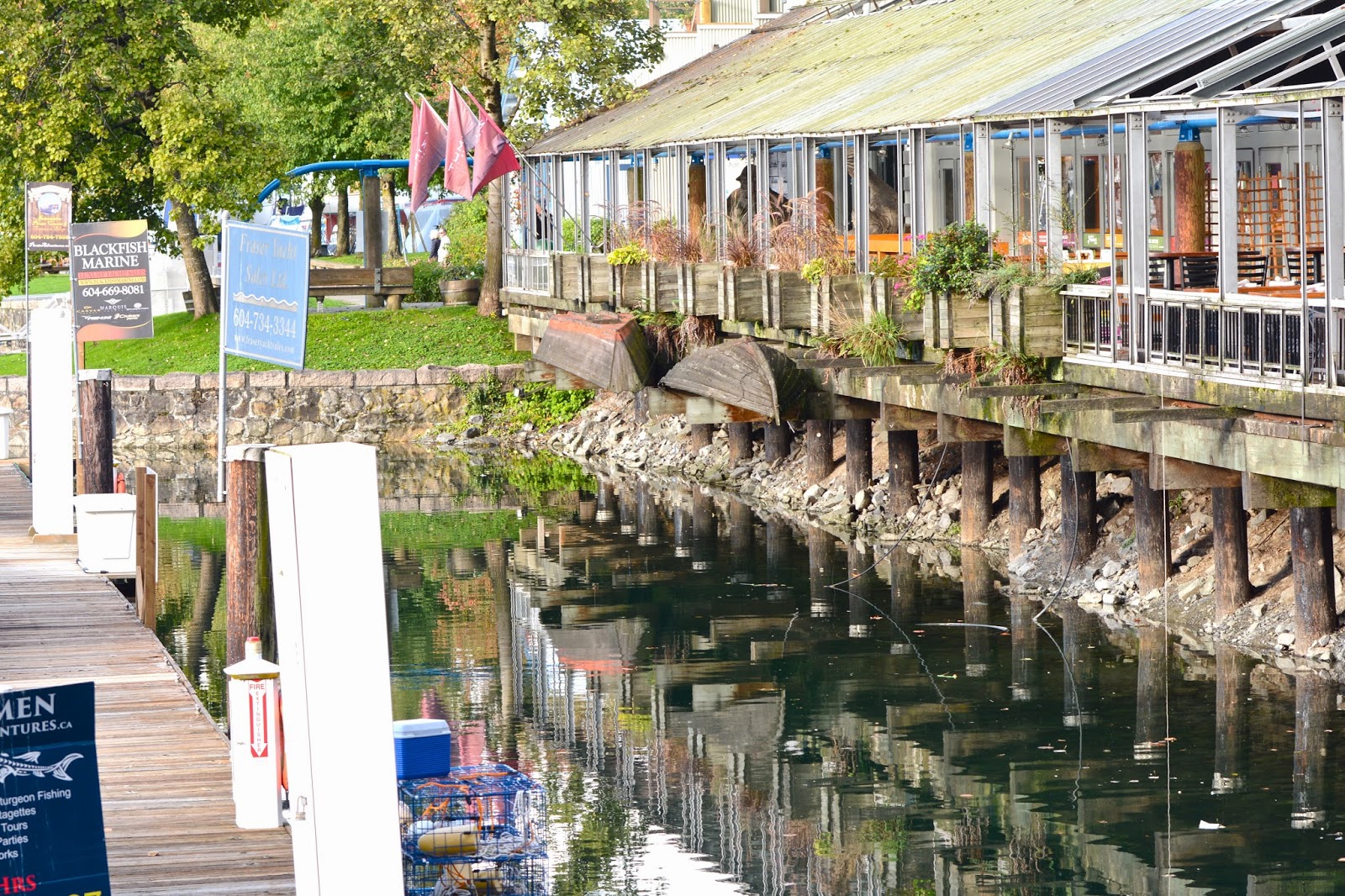 Later, when we were home, I noticed a leaf's shape.  They are different, this year, in spite of the fact they fall from the same trees as last year. A fellow blogger-photographer noted in one of my tree photos that it appeared to be edited to create an impressionistic mood, but that shot hadn't been edited.  I think something about the leaf shapes in our part of the city is creating that effect this year.  I tried to rest the leaf on Bill so I could take the photo. 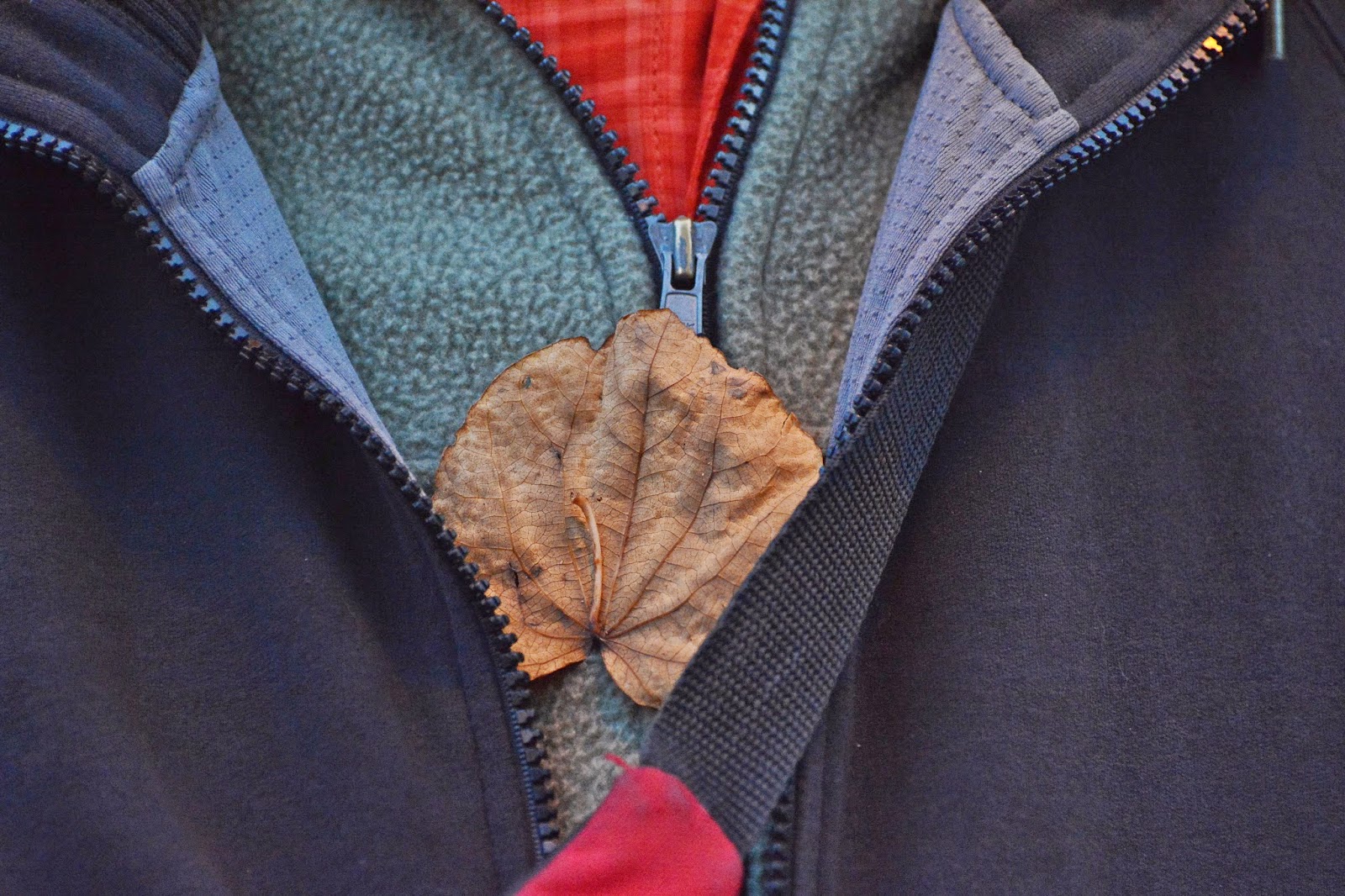 That made us laugh. 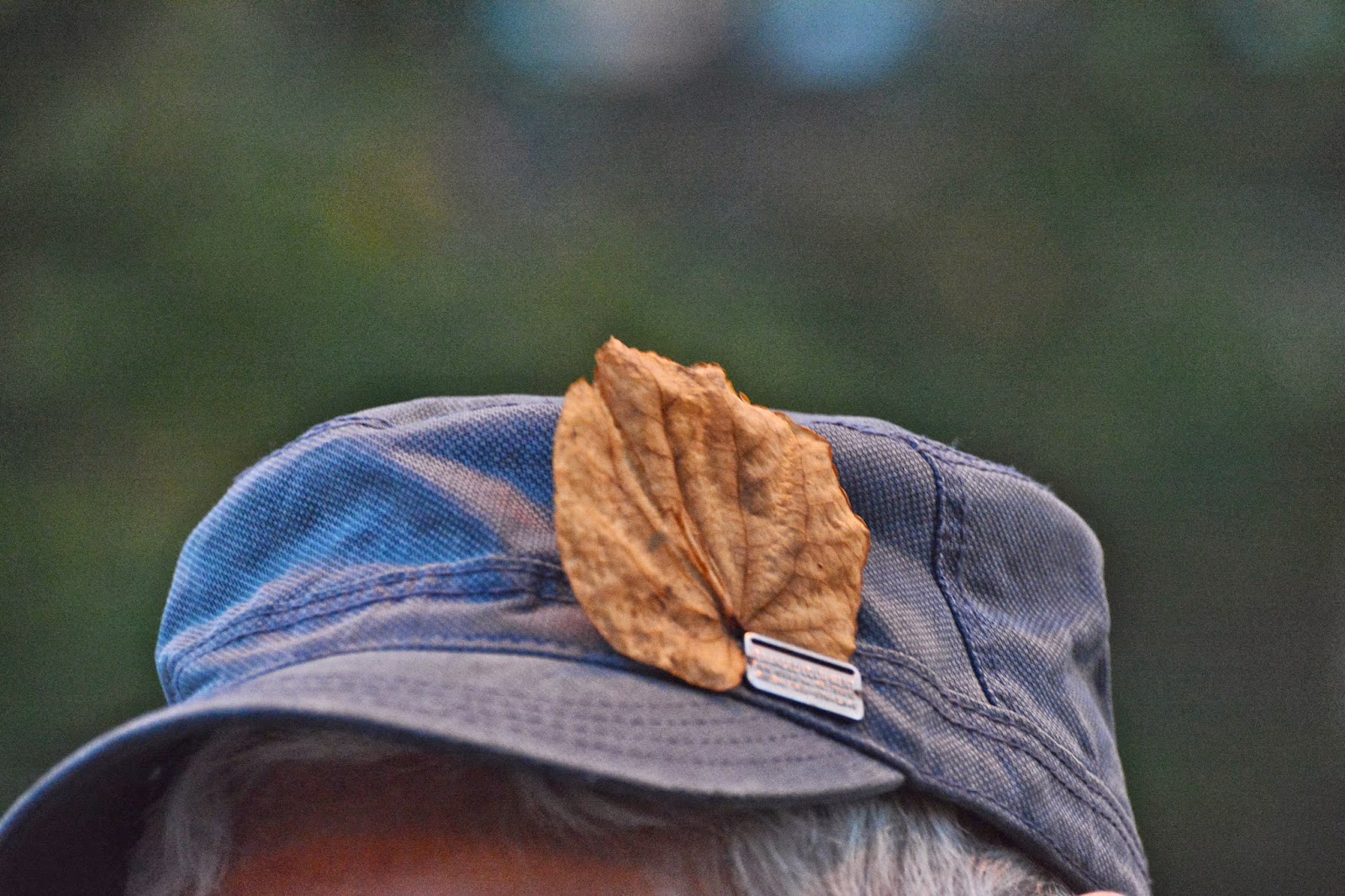 Laughing with Bill is another thing I never take for granted. 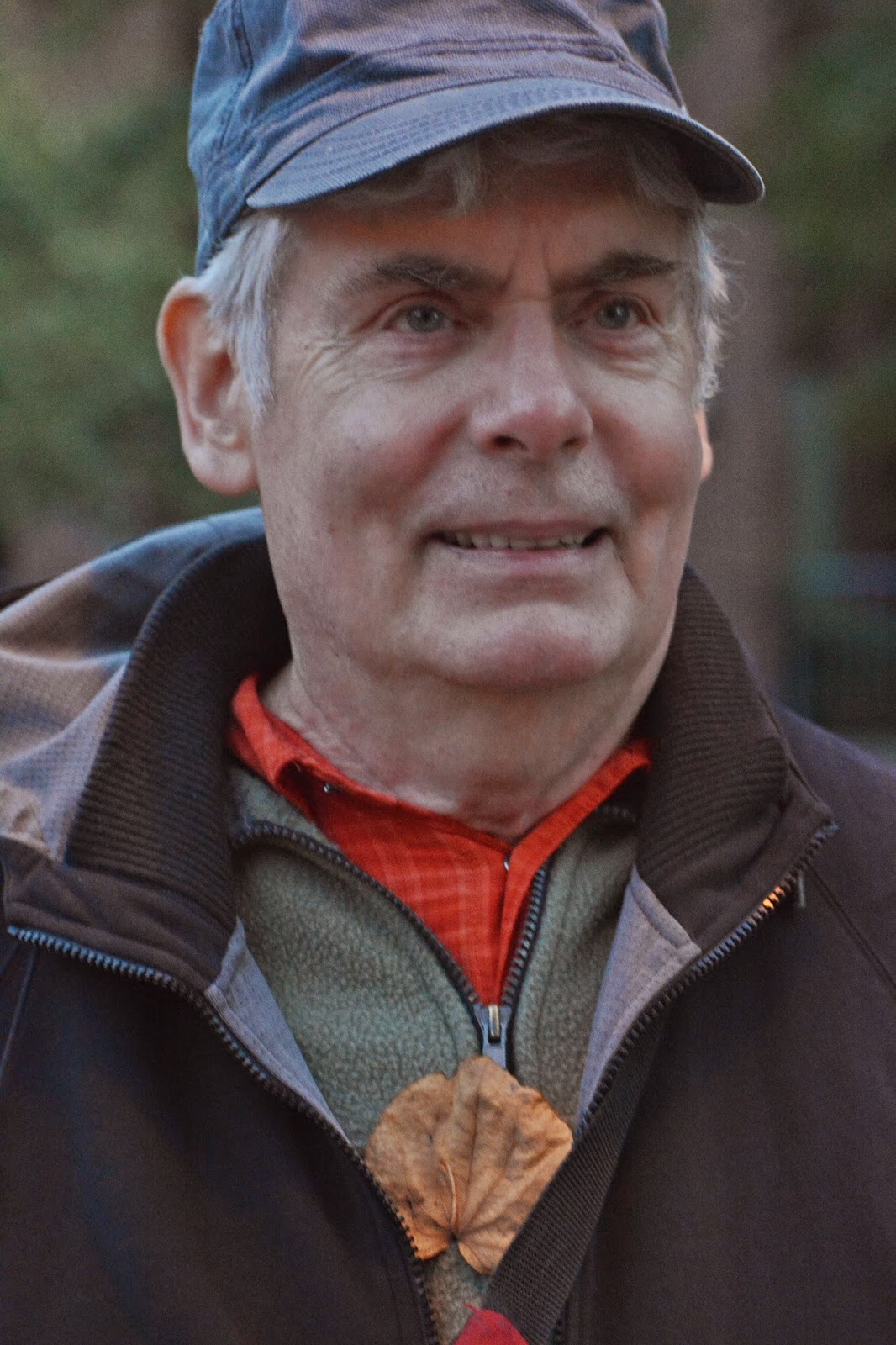 What are some of the things in your life.. 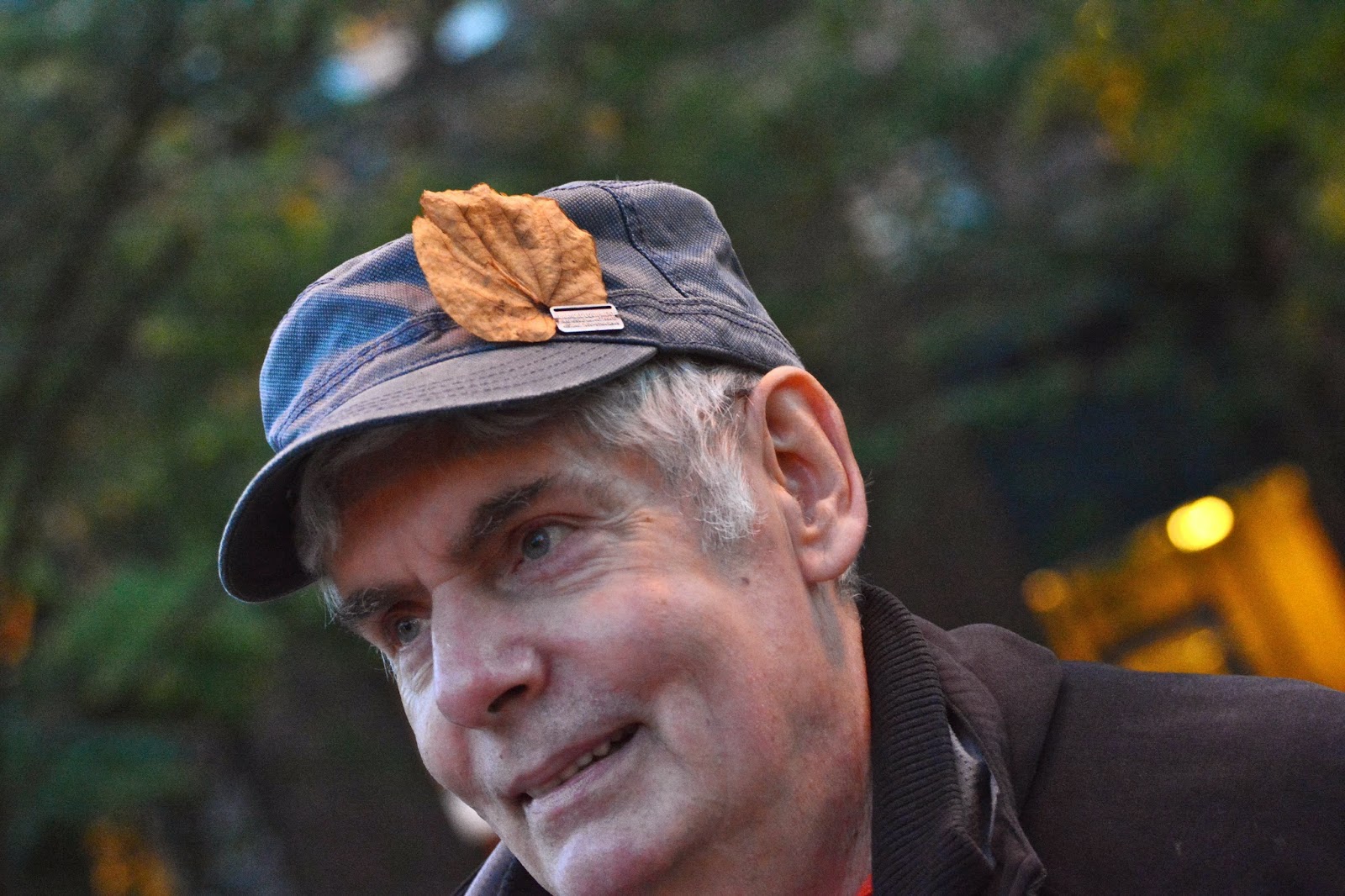 that you recognize as being full of wonder? 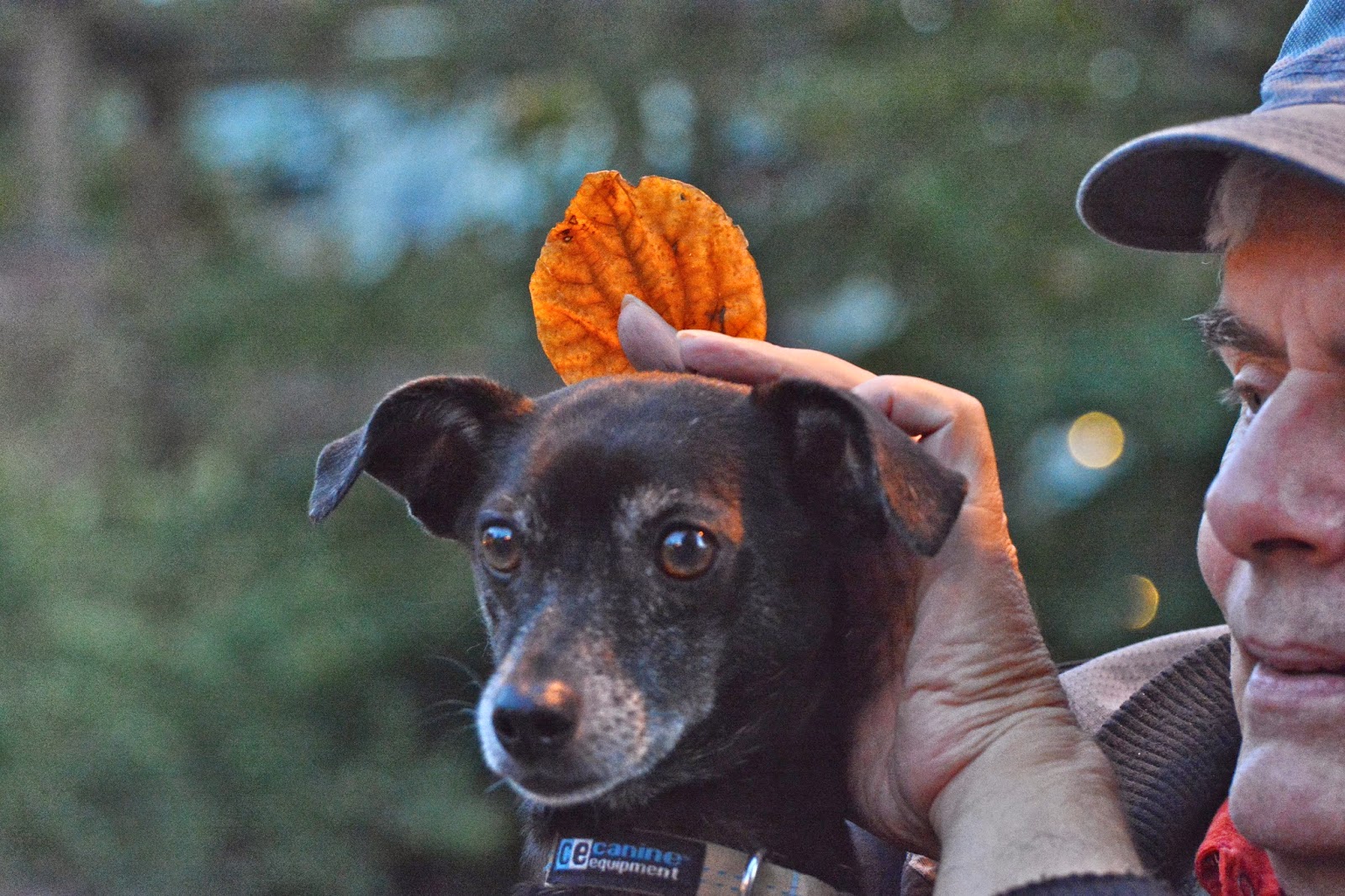 "When we are tired and feel discouraged by life's daily struggles,
we may not notice these miracles, but they are always there." 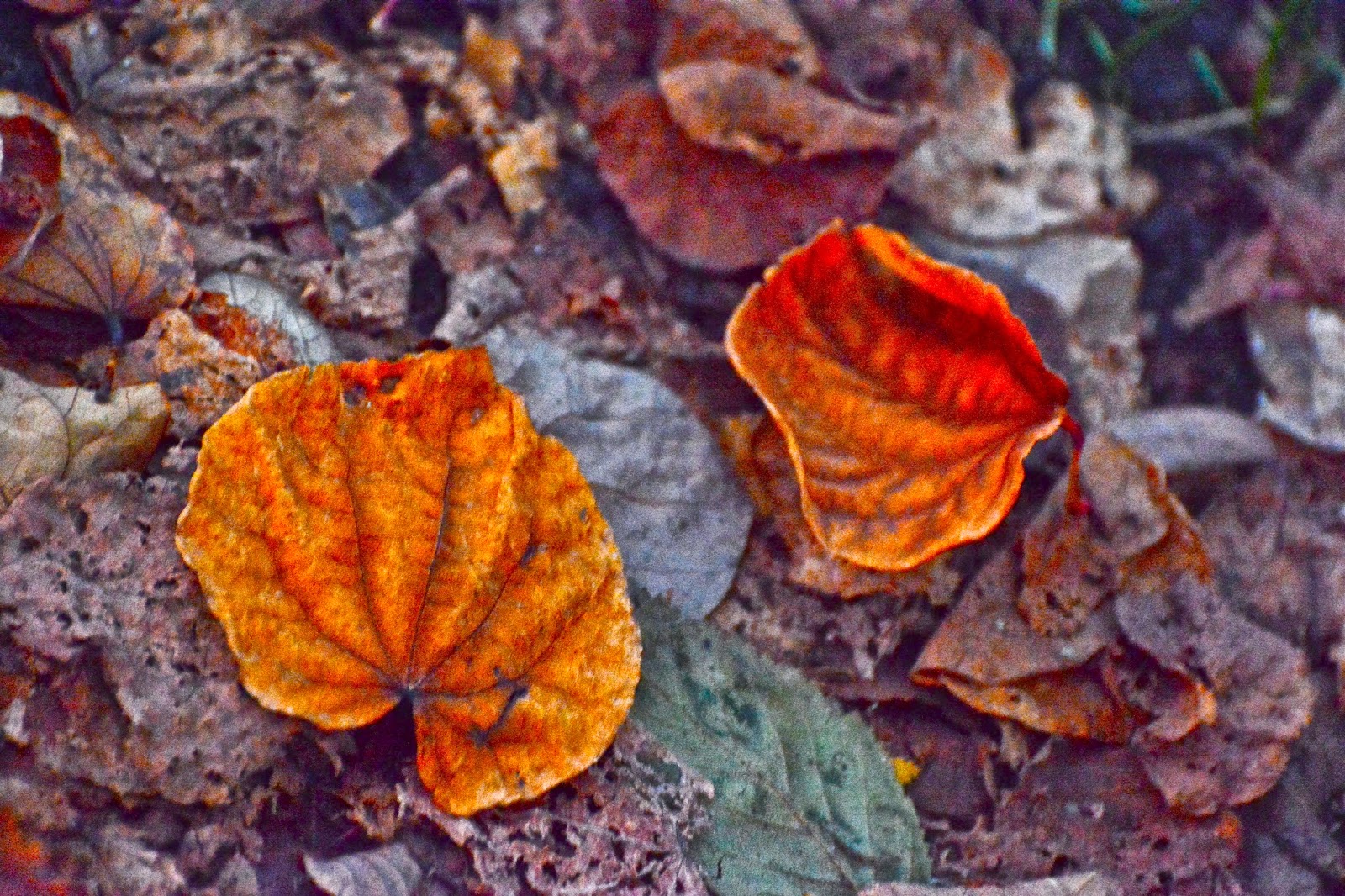 I added definition to this last photo of the leaf, wanting to show some details in the beautiful process of decay around it.   We had found it on a cement walkway, but I thought it might be happier in the company of earth and leaves.  Thank you so much, Jim, for inspiring this post.  Thank you, Our World Tuesday, and thank you, dear readers, for stopping by.  I like to think you will find at least one small miracle in your day today.
Posted by Black Jack's Carol at 10:13 AM