Well, I think I have written at least a couple of letter "P" posts for Mrs. Nesbitt's ABC Wednesday meme, now carried forward by a loyal team of volunteers, and the word "play" has come up more than once but it is the theme that seems most important to keep alive this morning, so here are a few of my thoughts about that concept.

First, Bill begins just about every one of Black Jack's days with a play session that includes.. 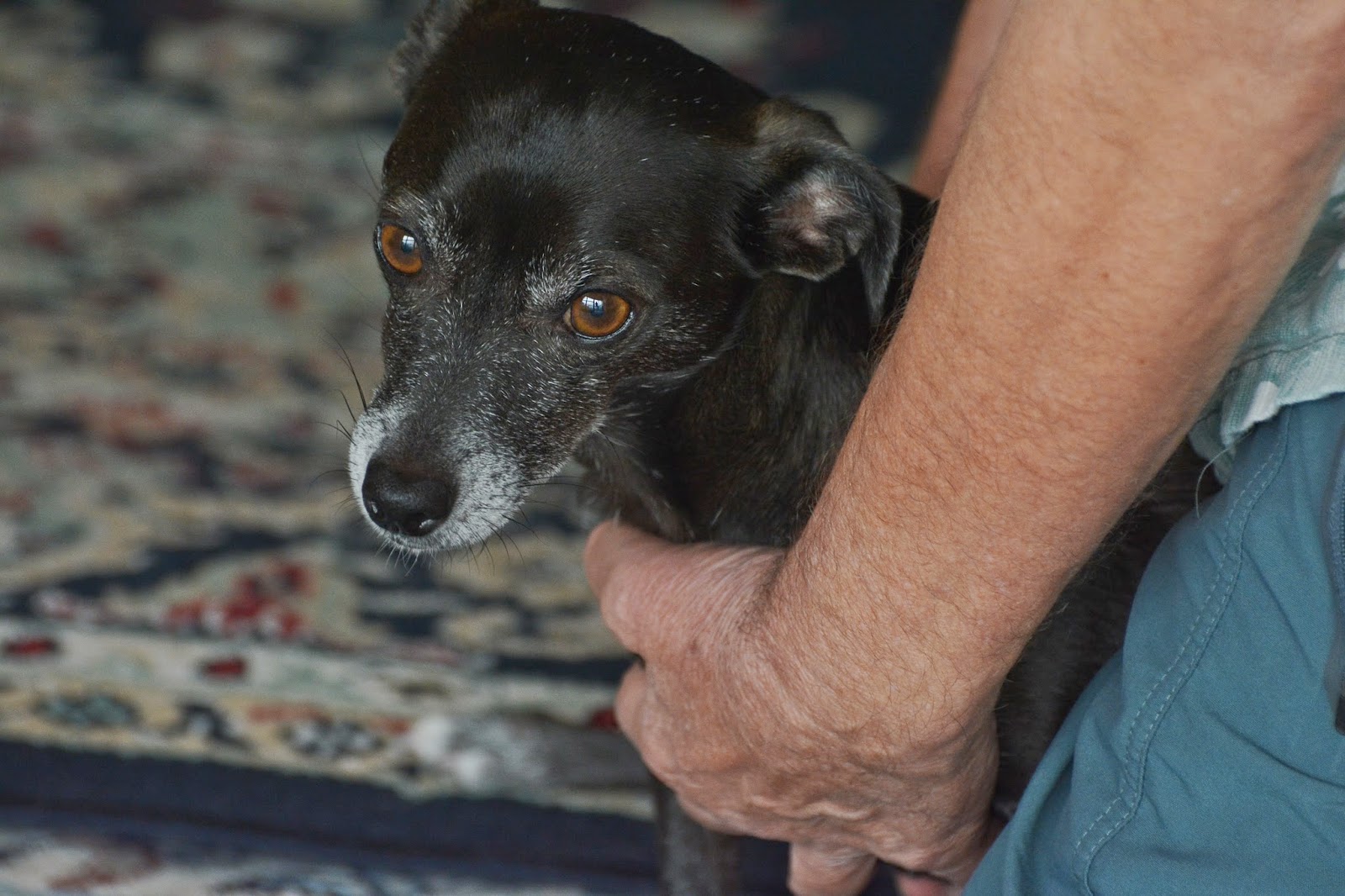 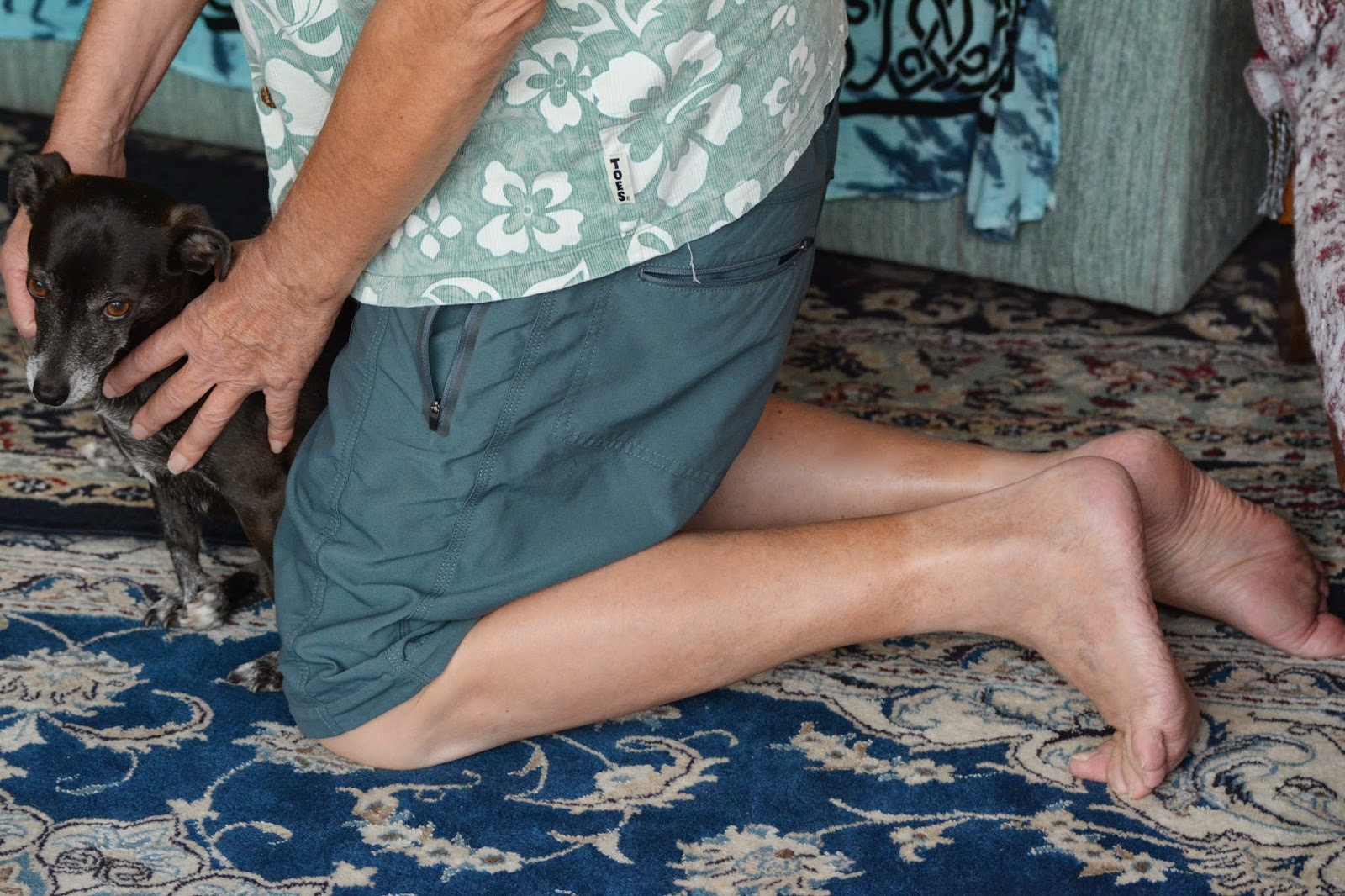 and lots of games.. 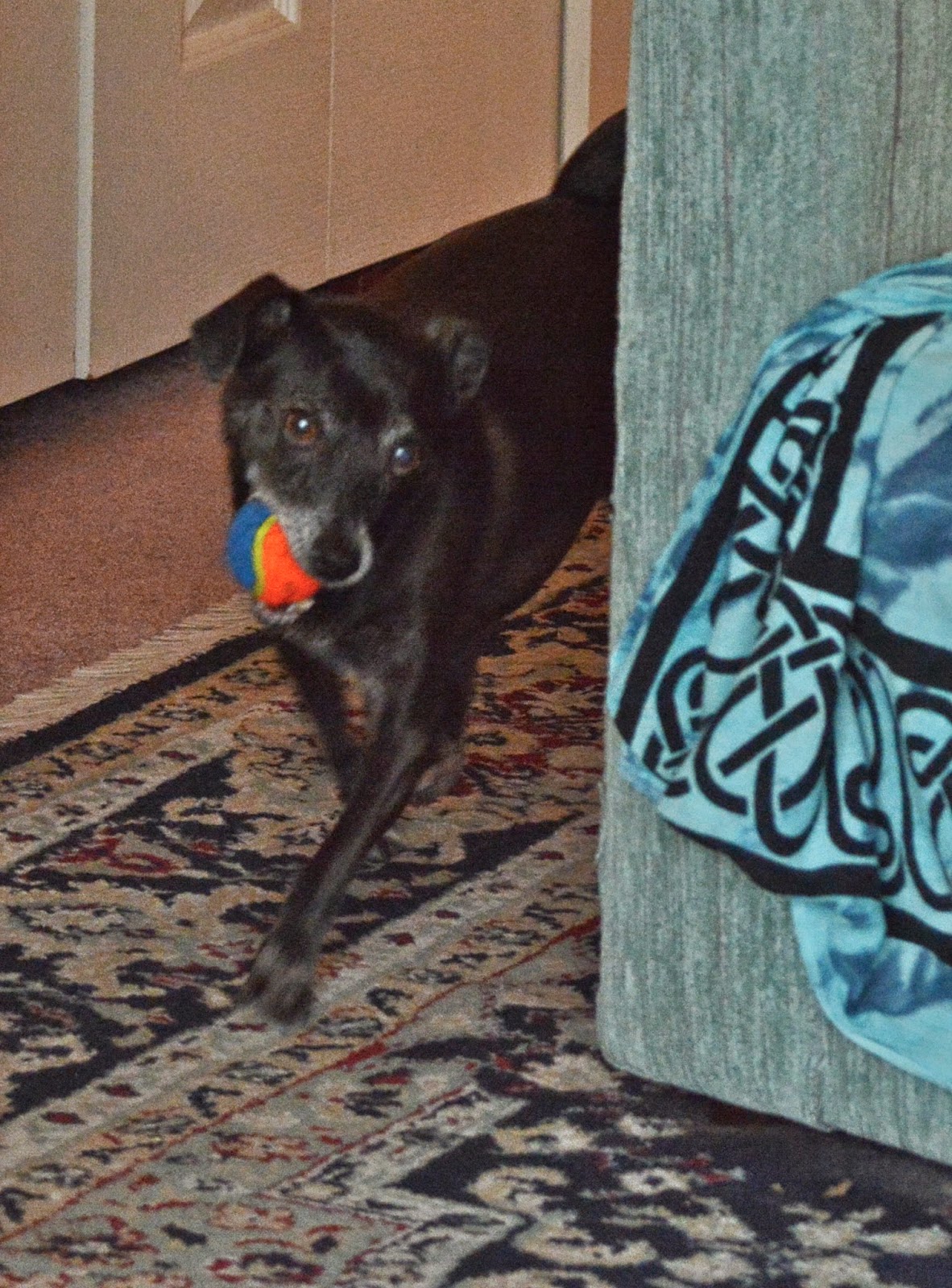 that give them both a mix of physical exercise and fun.. 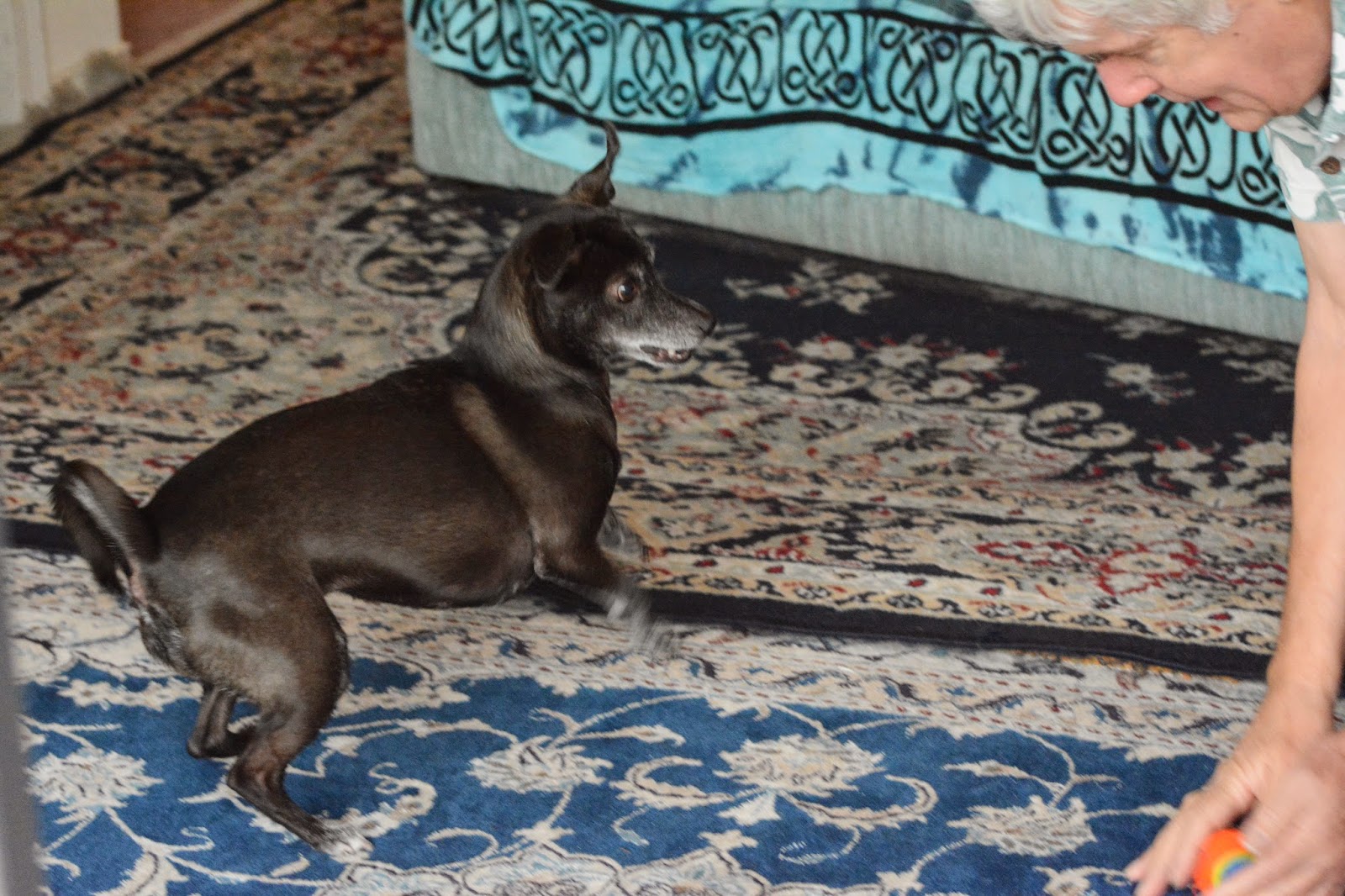 and provide plenty of laughter, too, for their happy photographer. 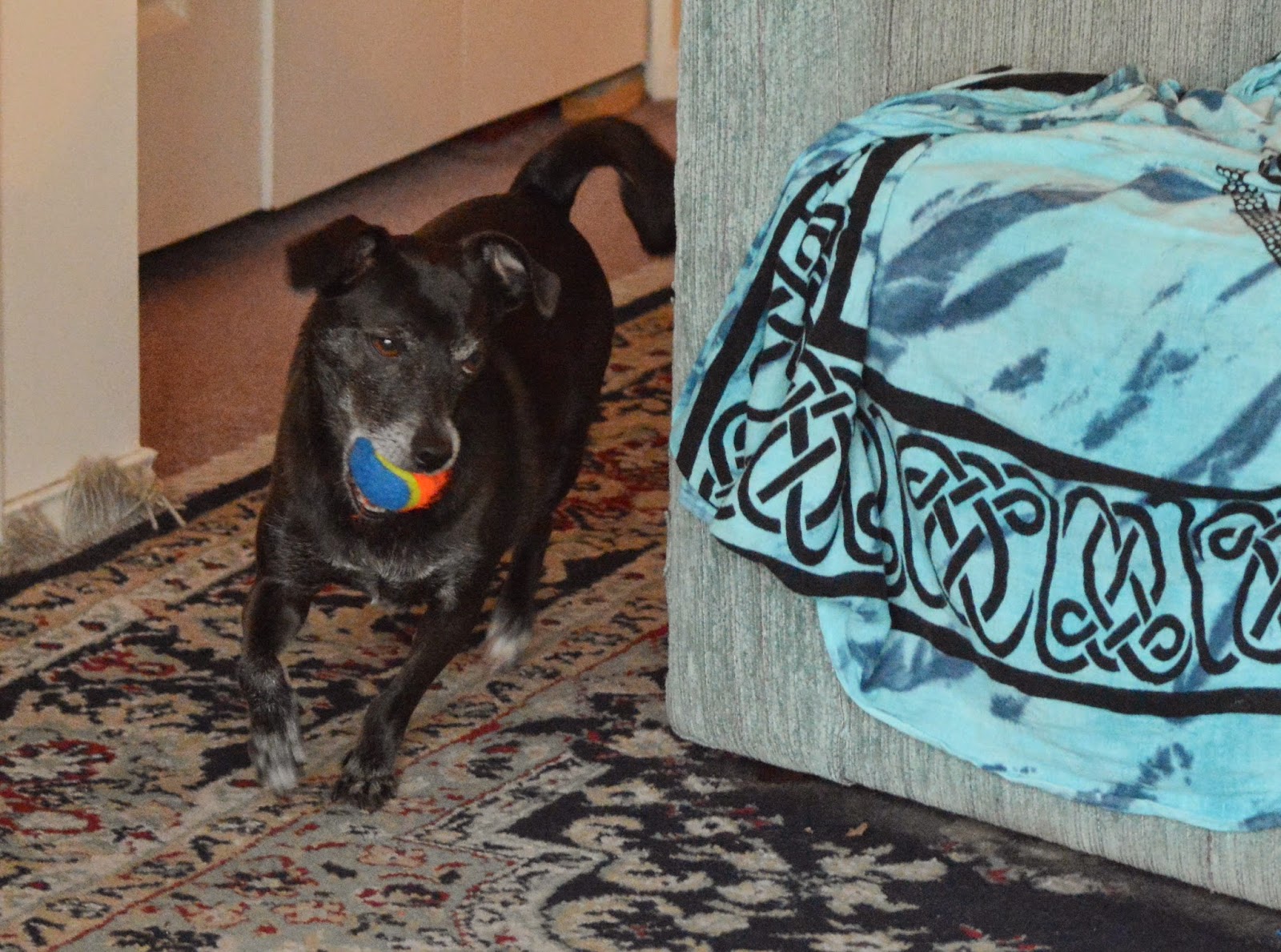 Part of my play, as well, comes from learning new words.  The Phrontistery site, with its unusual and sometimes totally obscure words, has provided lots of entertainment.  Here are three words that caught my attention for the letter P.  I'll try to use them in the post at some point though I don't want to be too panglossian in thinking I'll remember to do that.
1. paysage - landscape
2. perce - dark blue
3. panglossian - overly optimistic

We have been reading "RIght Ho, Jeeves" by P. G. Wodehouse, and I love the strong sense of play and humour purveyed in his writing. 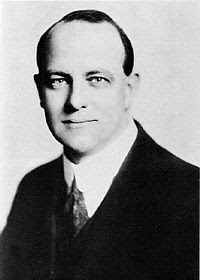 A Wikipedia article has filled in many details of his life story that surprised me.  One sentence described him as "profoundly uninterested in politics" and that unfortunately led to his being interned in Belgium in 1939 when WW2 broke out.  Though a citizen of England, he had been living in Paris at the time, and since he had no idea of the seriousness of the circumstances, he made no effort to return to his homeland.  He ended up in Tost (now Poland) where he was known for entertaining other prisoners.  He was accused of some very serious offences at the end of the war by his home country, and though they were later disproven, he was provoked enough that he never returned to England, choosing to settle in New York instead, and becoming a U.S. citizen in 1955.  It is a pity that only two months before his death, his accomplishments were finally recognized in his homeland with some well-deserved awards, but he wasn't well enough to travel.  It strikes me that even the most well-ingrained sense of play is not immune to pugnacious disputes and misunderstandings, but the many popular quotes taken from Wodehouse's prose, poetry and musicals is testament to the laughter he brought and continues to bring to the world posthumously.    Here are a couple that made me smile this morning, but you can find many more at this link.
“It isn't often that Aunt Dahlia lets her angry passions rise, but when she does, strong men climb trees and pull them up after them.”

"The least thing upset him on the links. He missed short putts because of the uproar of the butterflies in the adjoining meadows."

"Her pupils were at once her salvation and her despair. They gave her the means of supporting life, but they made life hardly worth supporting."

Moving on to a few more "P's" that give me pleasure, one would certainly be paintings.  J. Dougall's poppies struck me yesterday in the wake of the recent murders of two Canadian soldiers, 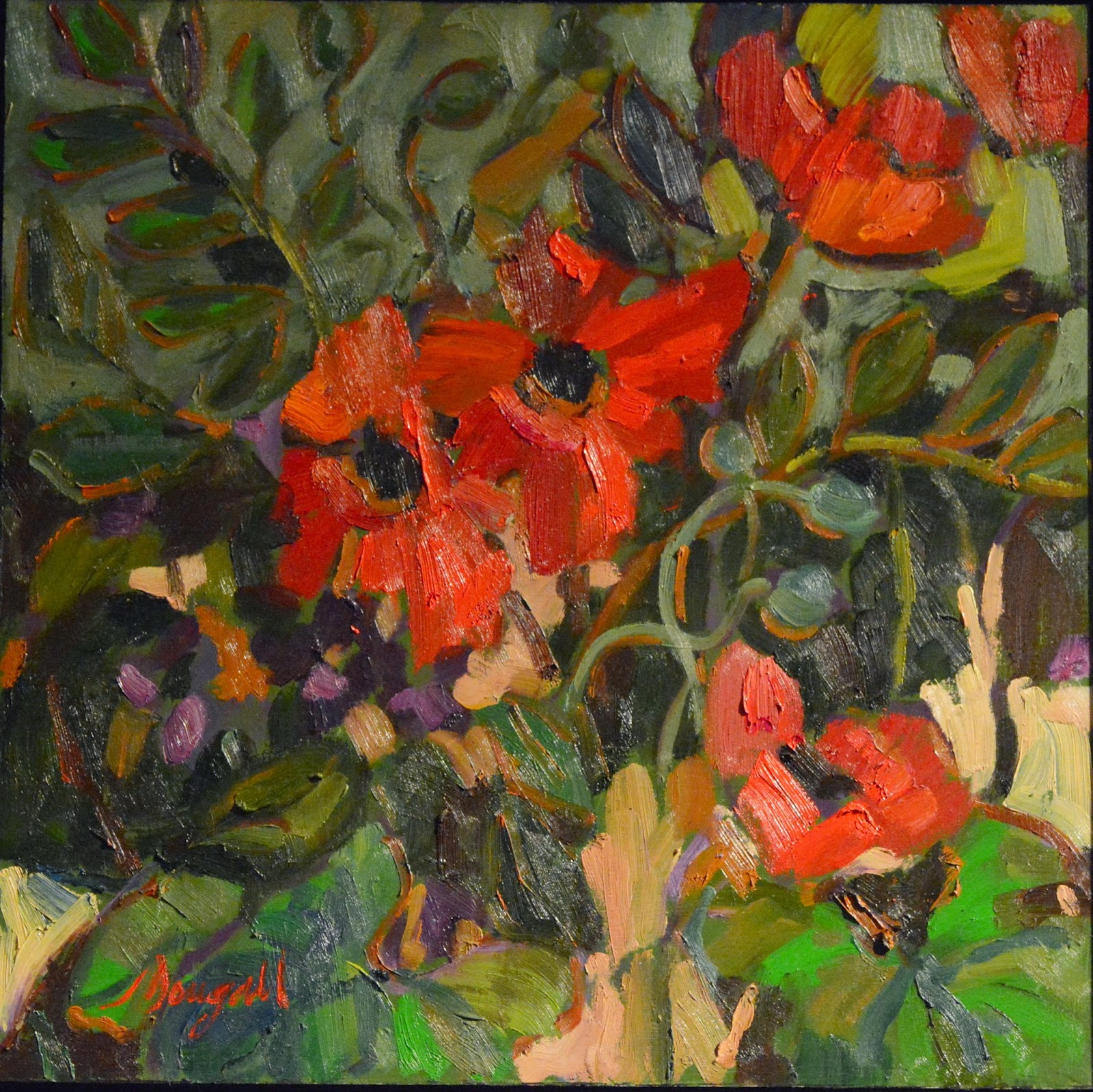 and "Martha Downwind" by Mark Heine also caught my eye for the first time yesterday.  Though I haven't been able to find "perce" used in any context indicating colour (except for the Phrontistery site), I wonder if the dark blue shadows under the boat might be an example of  that shade.  I do love the water textures and reflections in this work. 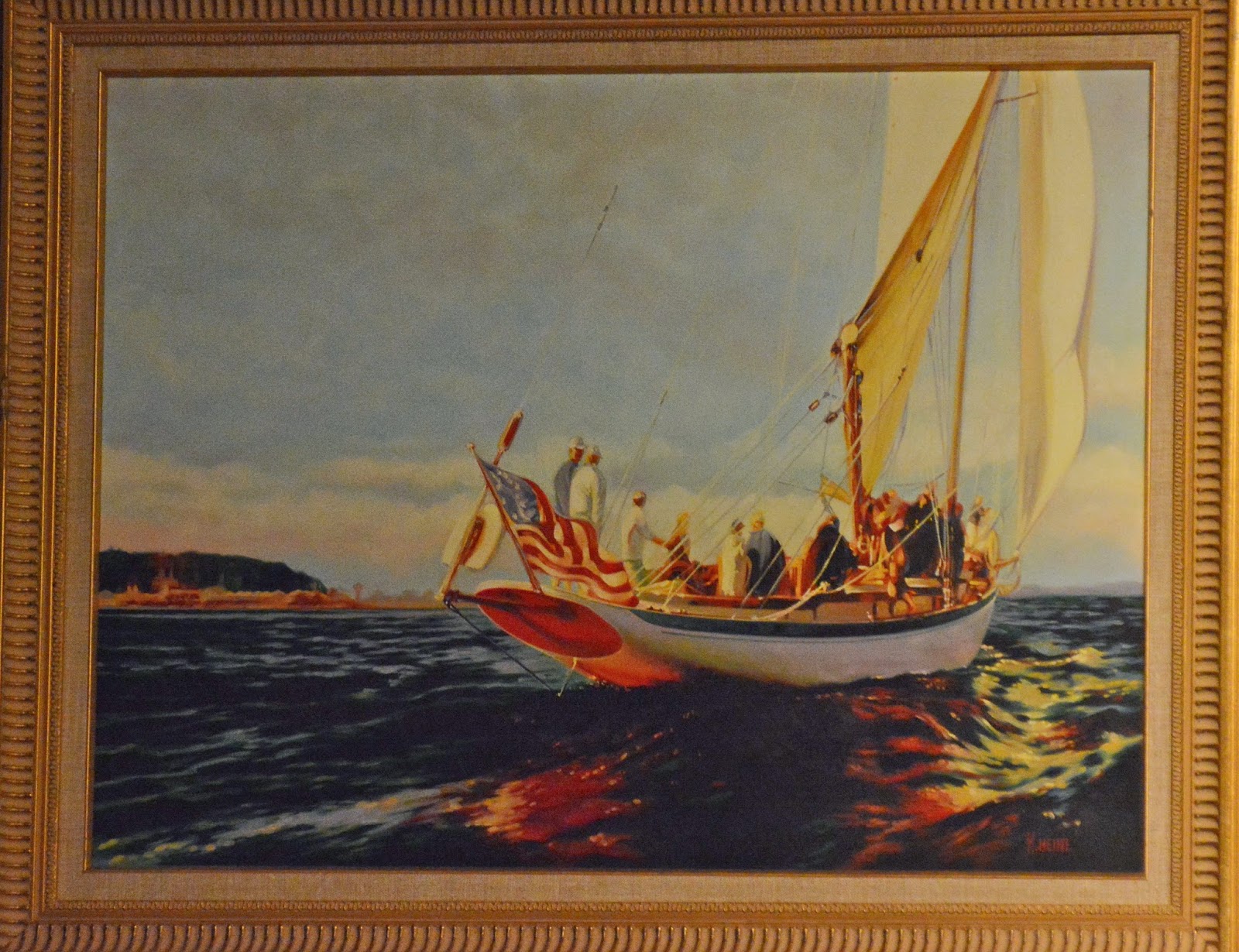 Riding our bicycles is another form of play for us.  Yesterday, the rain stopped just long enough for us to make our way to Olympic Village.  We stopped at this spot by False Creek because we saw a couple of photographers with tripods set up.  They were young art students and had no particular project in mind, but were just playing with their cameras as they took in the paysage.  I enjoyed a short conversation with them and decided to take a few pictures myself (shocking, I know :) 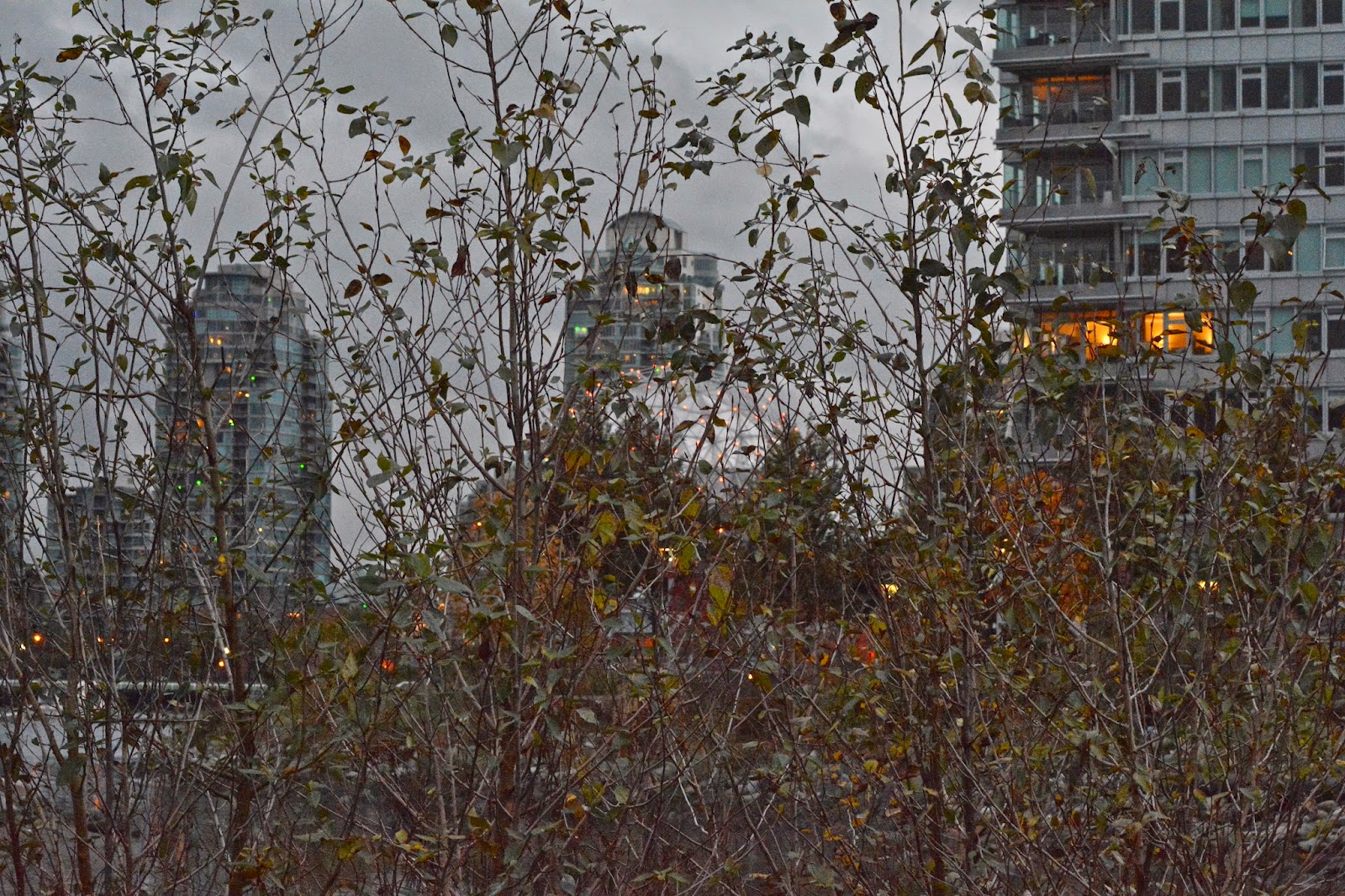 The low light gave these scenes a preternatural aura.. 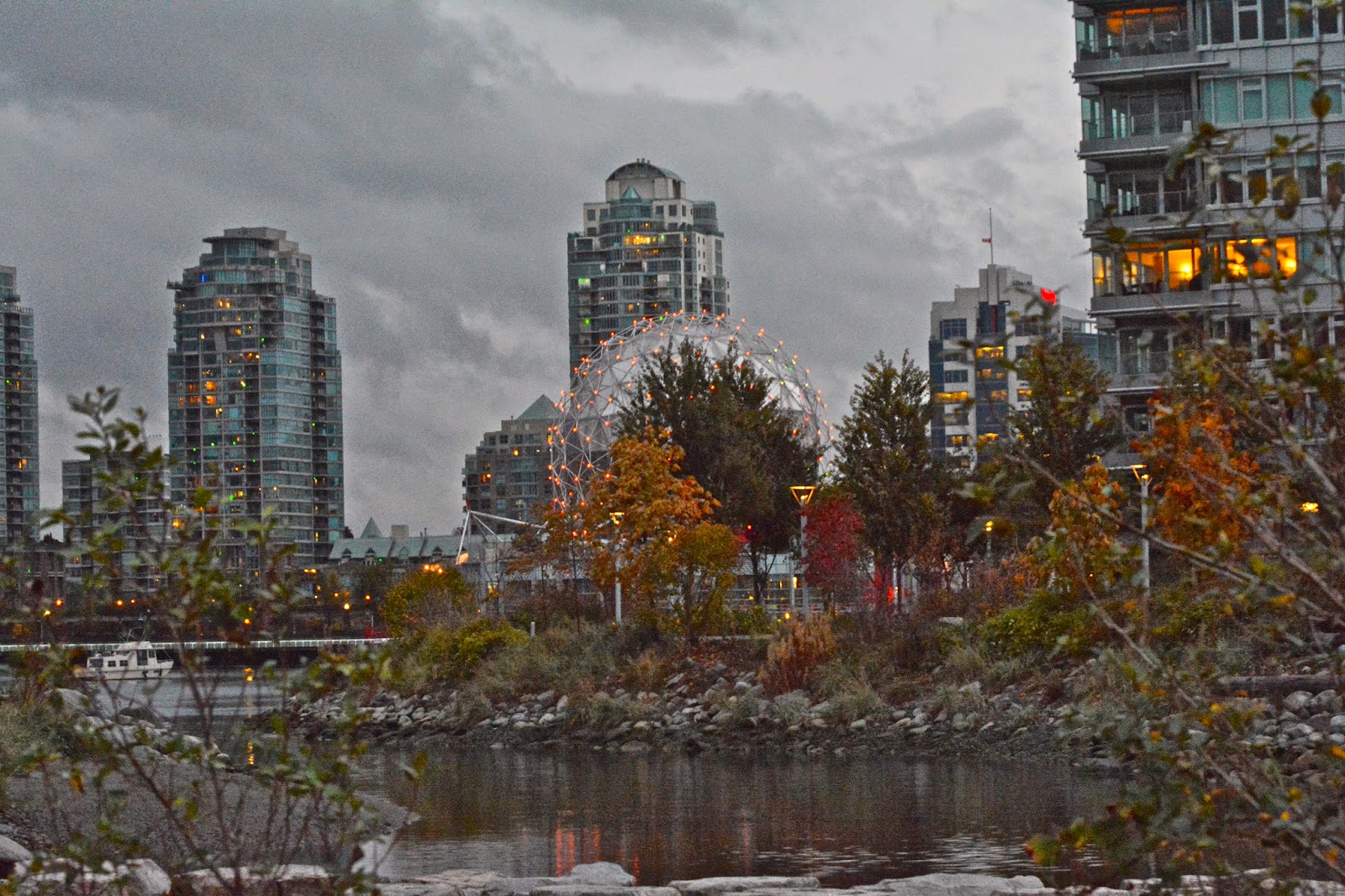 that piqued my interest, keeping me almost as fully entertained.. 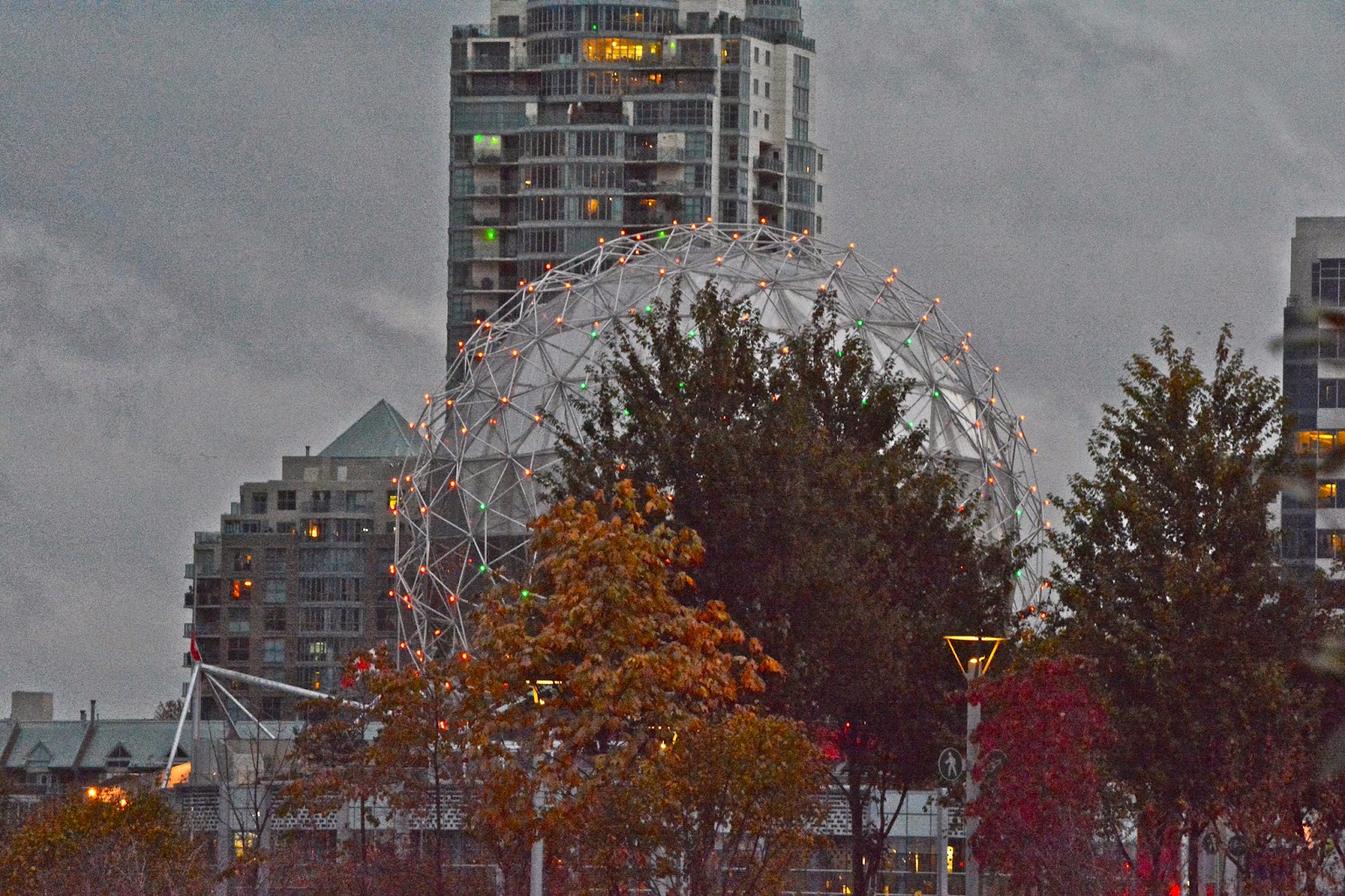 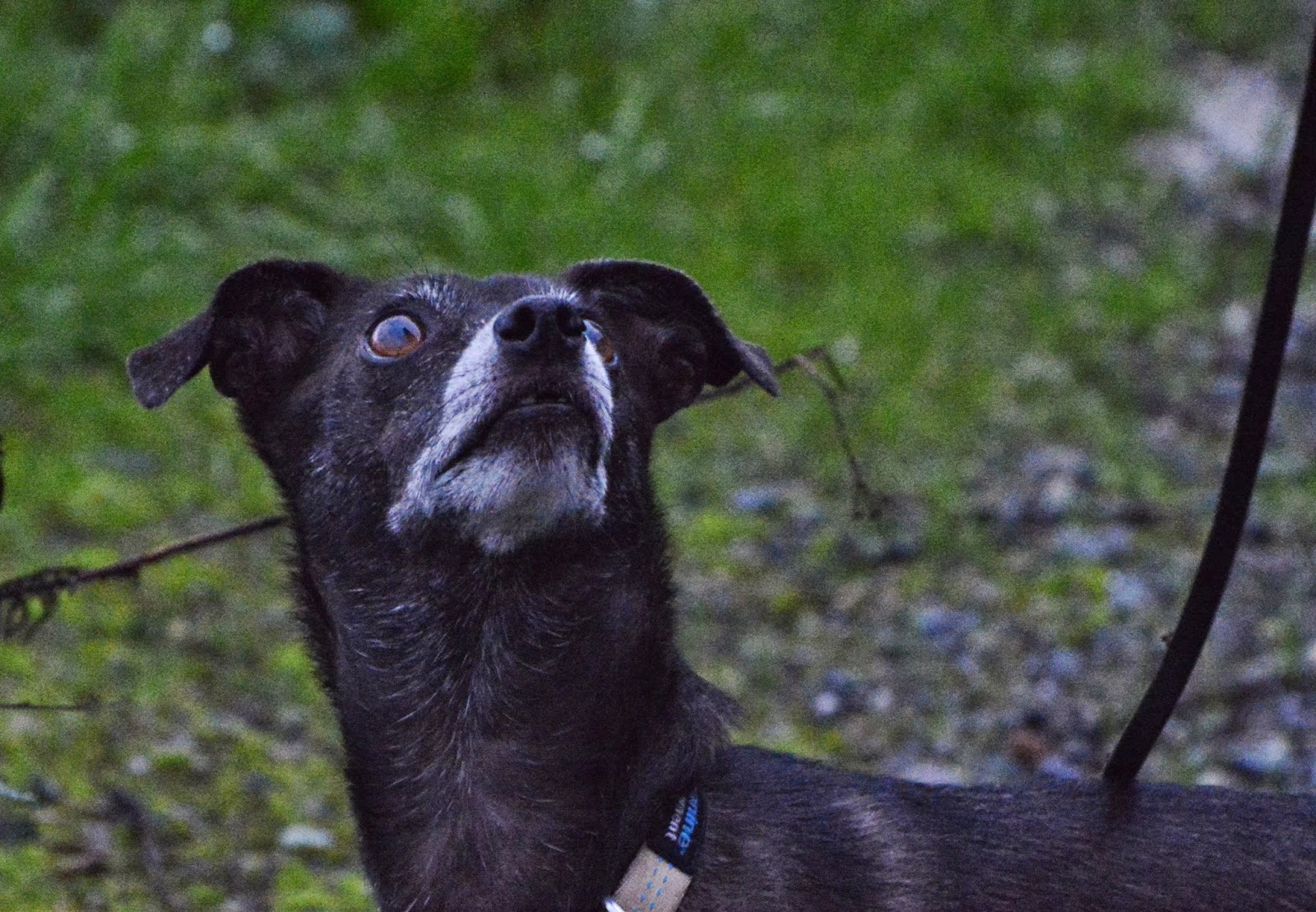 She was happy to sniff the air and waterside for critters, and when it seemed that wouldn't pan out, she was perfectly pleased to resort to edibles in Bill's pockets. 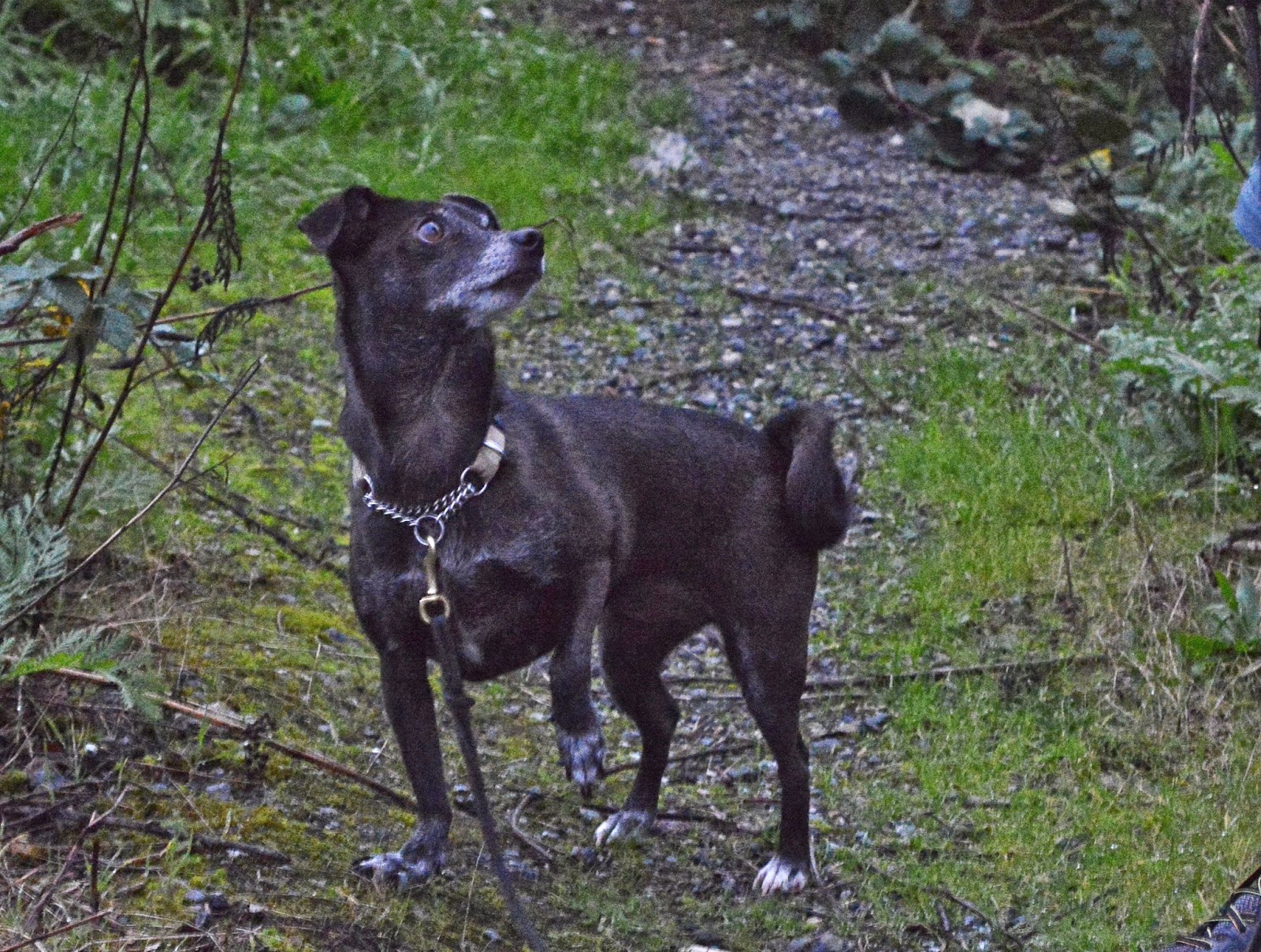 I loved this shot of Bill walking toward us with purposeful stride.. 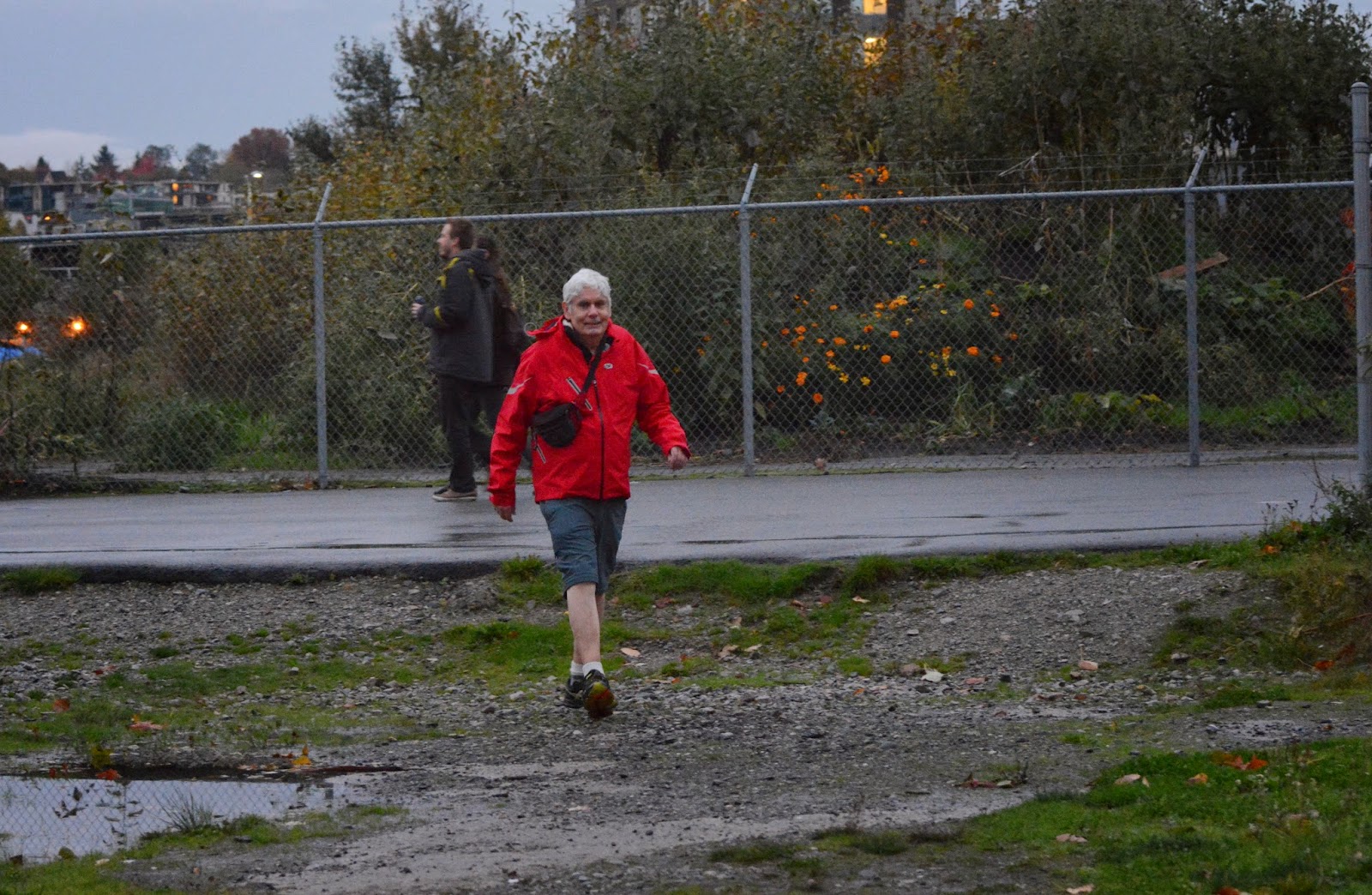 and both of us found the stadium's ever-prominent lights and reflections interesting, 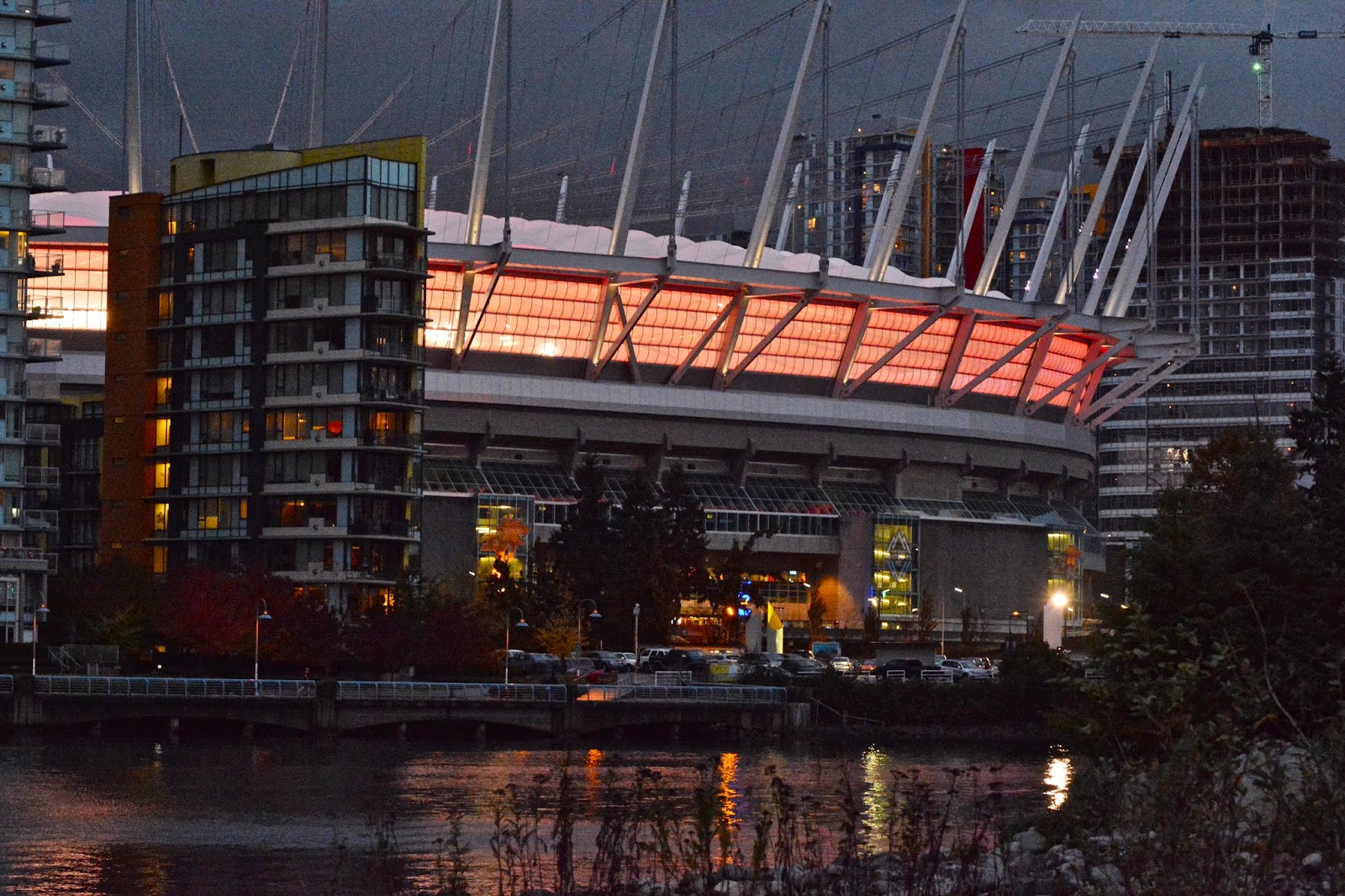 even as they peeked from behind the prodigious high-rises. 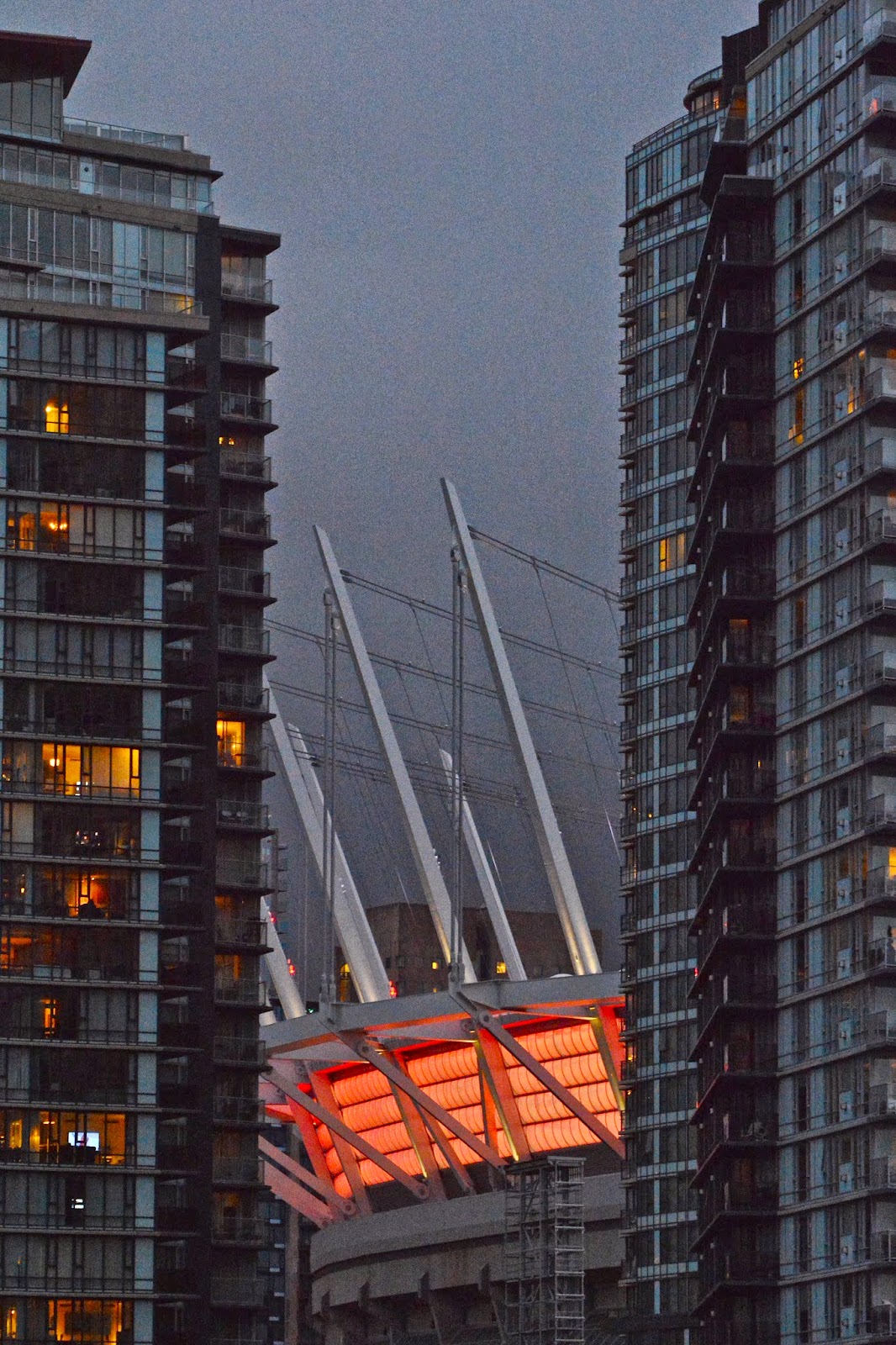 My camera performed well to capture these mallards making their way through a maze of algae in the small creek behind us (not False Creek), but with that, the light was gone, and we decided it was time to make our way home. 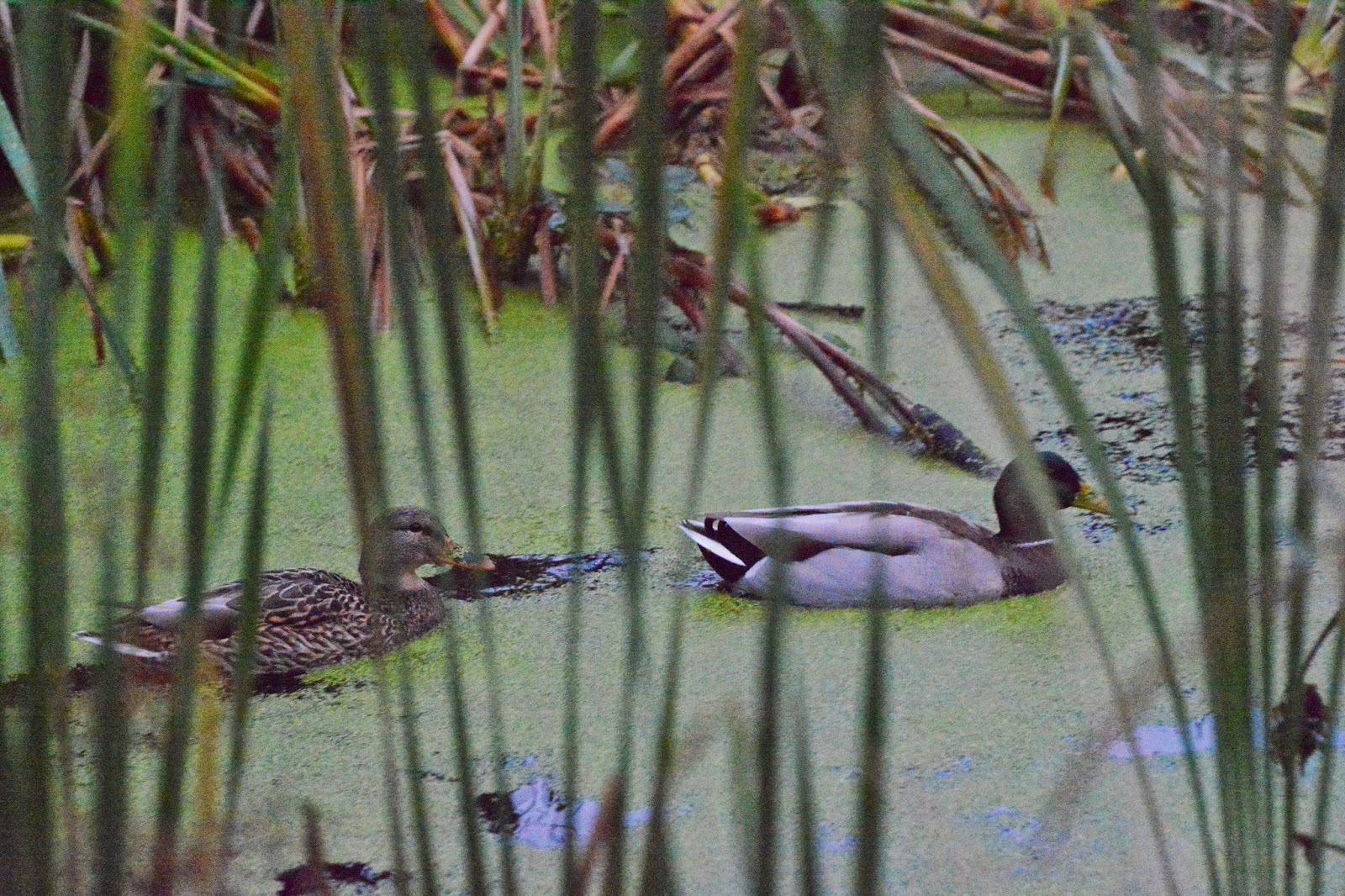 We dropped Black Jack off and then headed to Salsa and Agave, our favourite Mexican restaurant.  Our palates are so pleased by their tostadas that for months now, we haven't been tempted to explore the rest of  their menu.  As we ate, a racoon appeared at the top of a small tree outside the restaurant.  How it could have found itself there perplexed both of us. 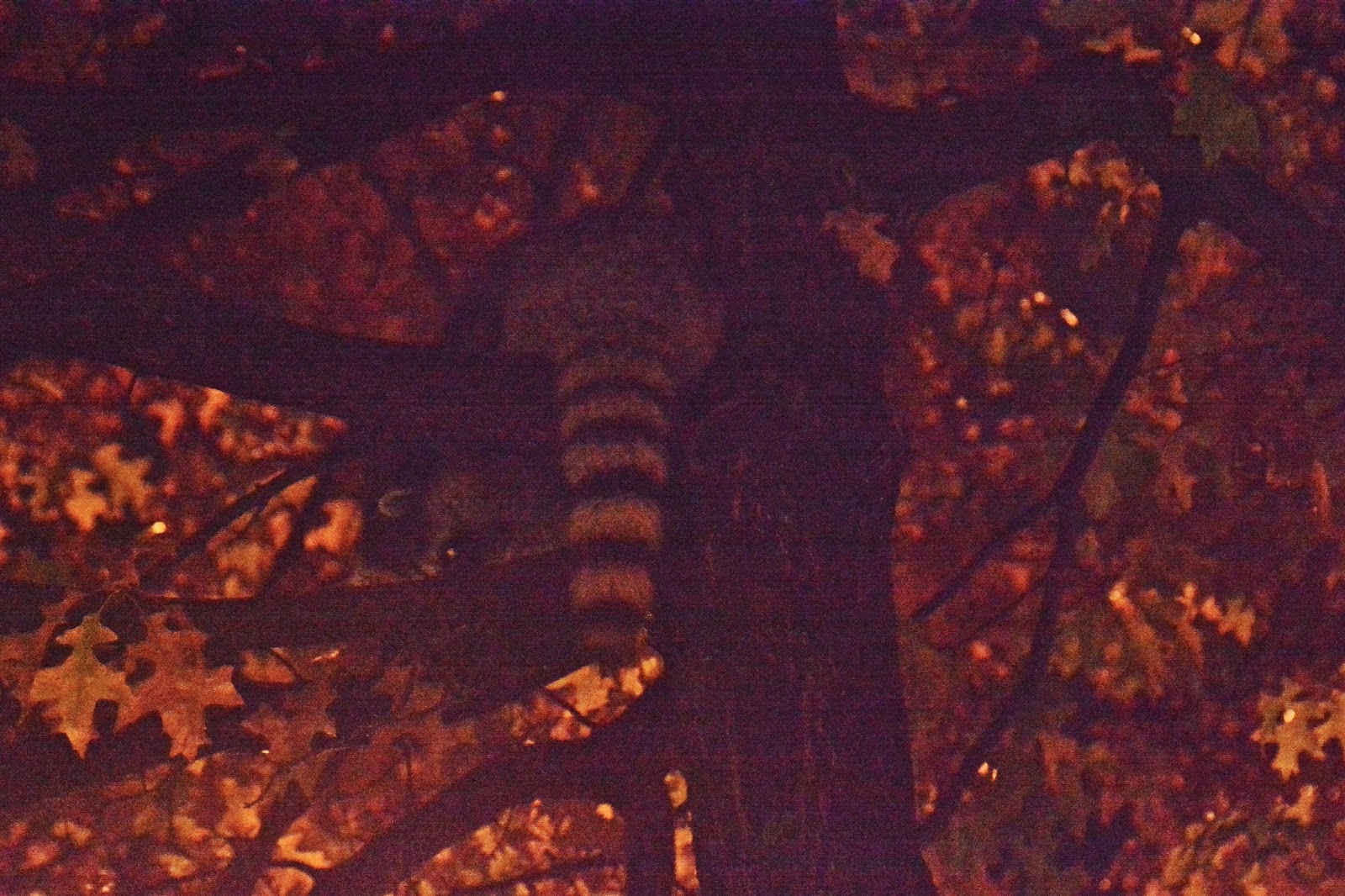 The restaurant is on Pacific Boulevard, a very busy street.  An unleashed dog paced back and forth under the tree and that perturbed us, since the dog's human appeared unconcerned,  but hopefully the racoon was able to make its way to a safer location later in the evening. 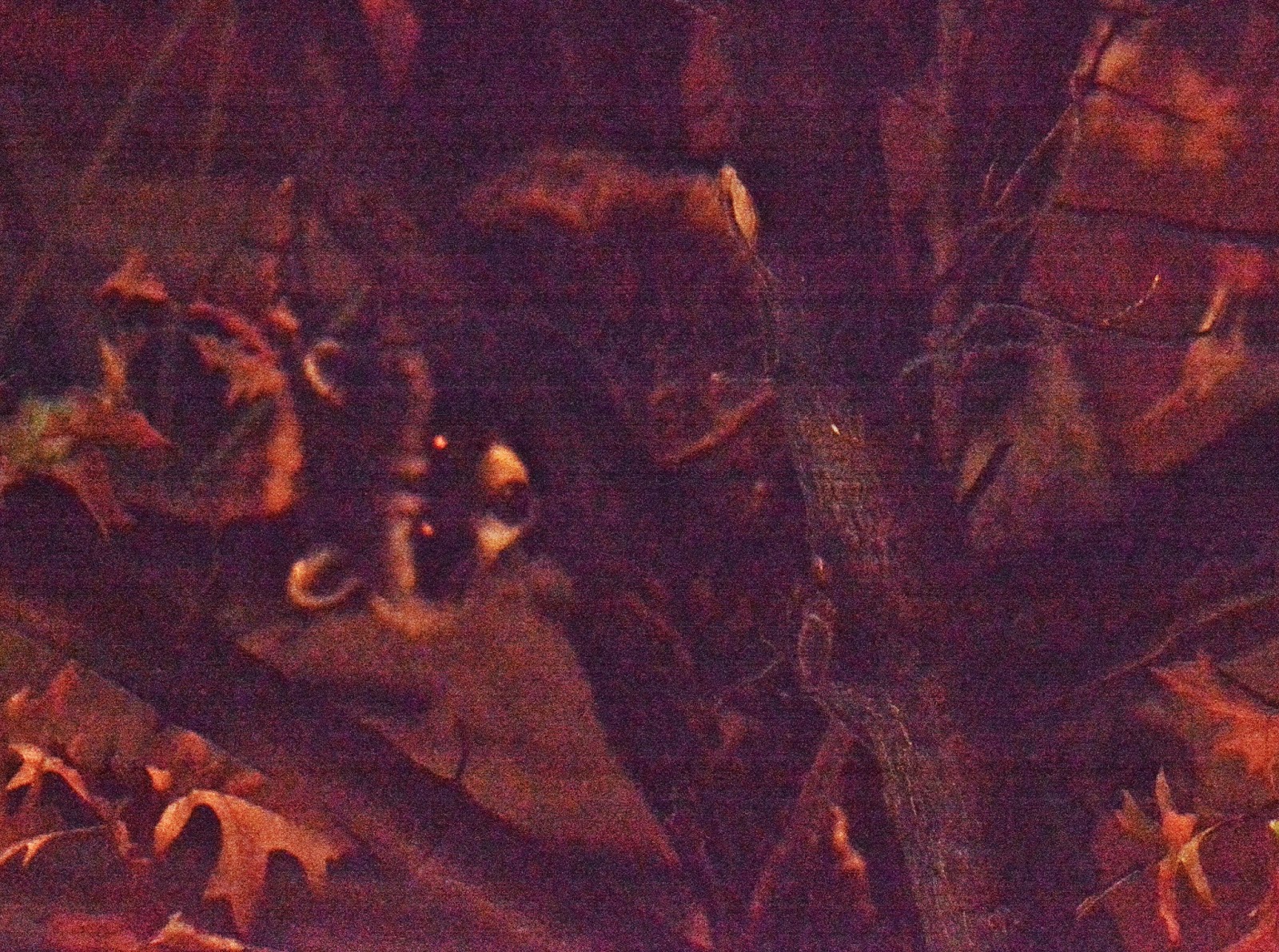 I know stereotyping is never advisable, but I always noticed a particularly strong sense of play in my Mexican students, and we could feel that in some of the Hallowe'en decorations in the restaurant.  My preference was for some of the more whimsical ones on display, 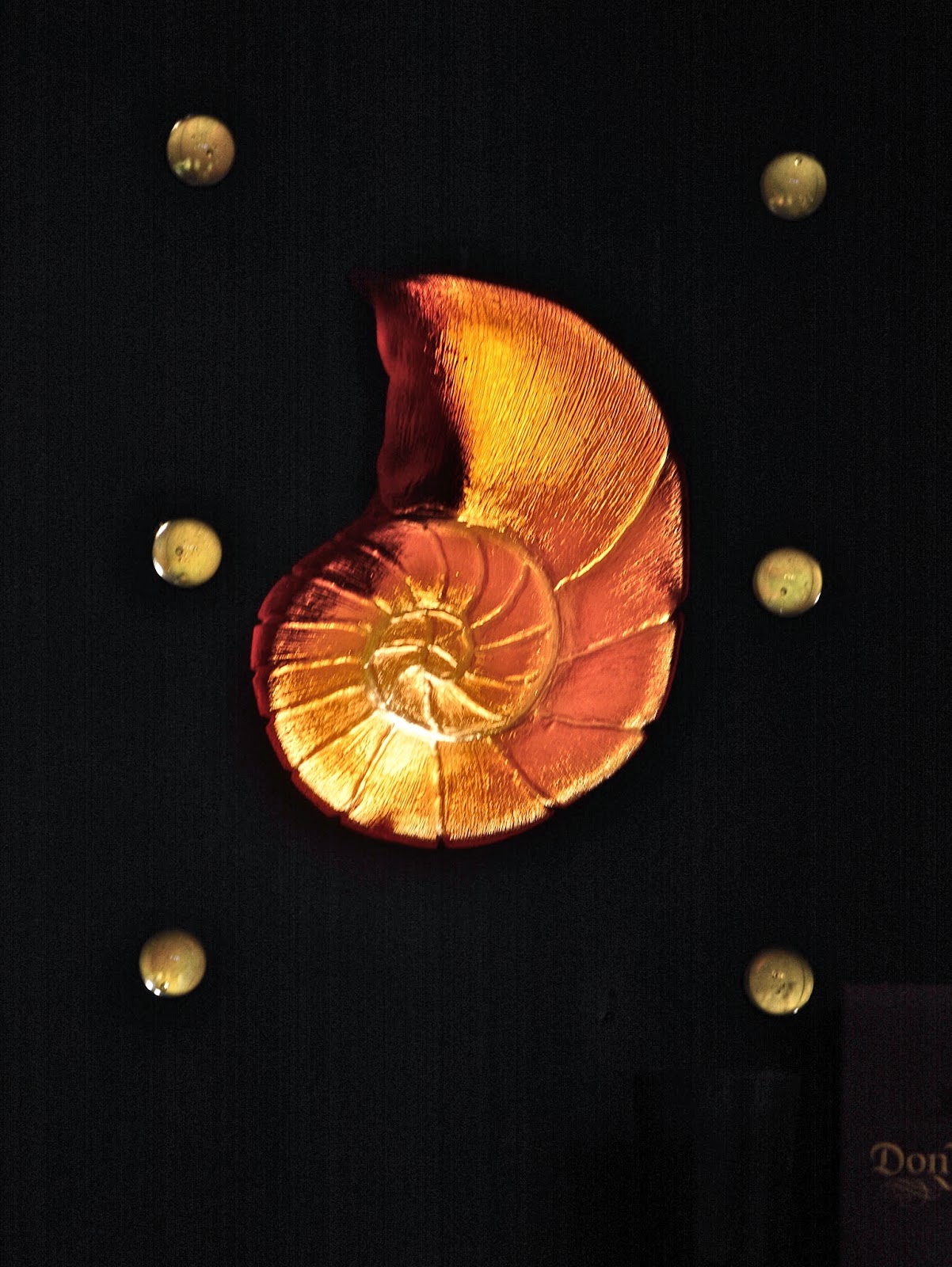 and I did think this dancing doll with the happy smile deserved some recognition.  Perhaps you will be persuaded that she makes an appropriate conclusion to this ABC post.  Many thanks for stopping by.  My gratitude goes to all who keep that meme going so successfully, but special mention must go to Roger Green and Reader Will  for their persistent faithfulness to Mrs. Nesbitt's original idea.  A very pleasant and playful Wednesday to you! 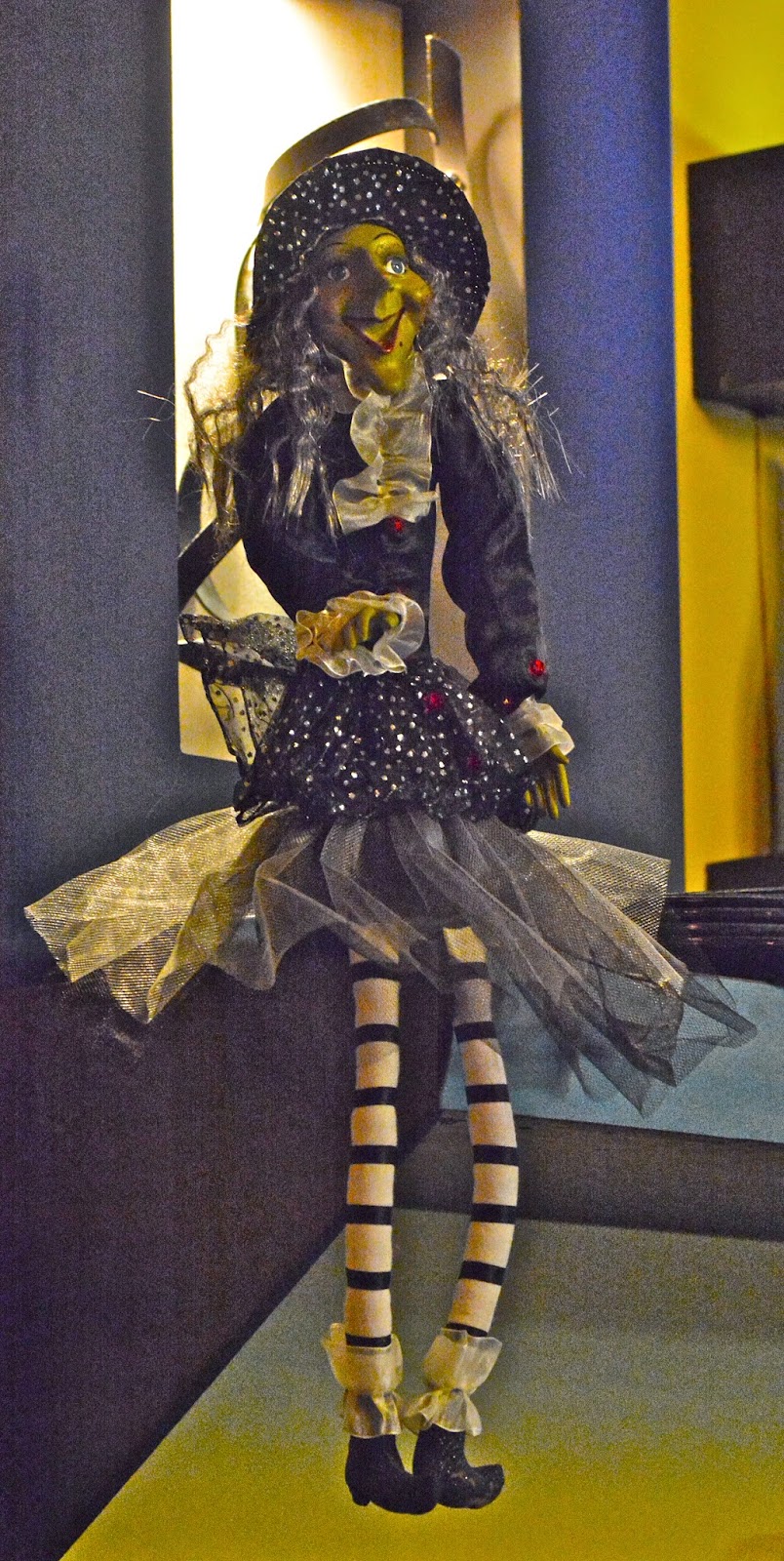