Orange Tones and other Happenings

It could have been the weekend yesterday.  Though our winter was unbelievably easy in comparison to just about every other province in Canada, people still feel that urge to come out of the woodwork to welcome summer when the first "no-coat-necessary" days arrive.  The bikeways and beaches were a hubbub of activity.

Bill rode his bike for the first time in many months!  Black Jack also rode in her basket for the first time this year.  Bill just did a short ride, but his balance and strength looked really good. I didn't manage to get pictures of either of them, but that is on the agenda for today :)

I continued on to Stanley Park with Black Jack, and caught some of the orange that seems to be the dominant theme colour this year.  Just perfect for an Orange You Glad It's Friday post. Thank you, Maria, for hosting this meme so successfully. 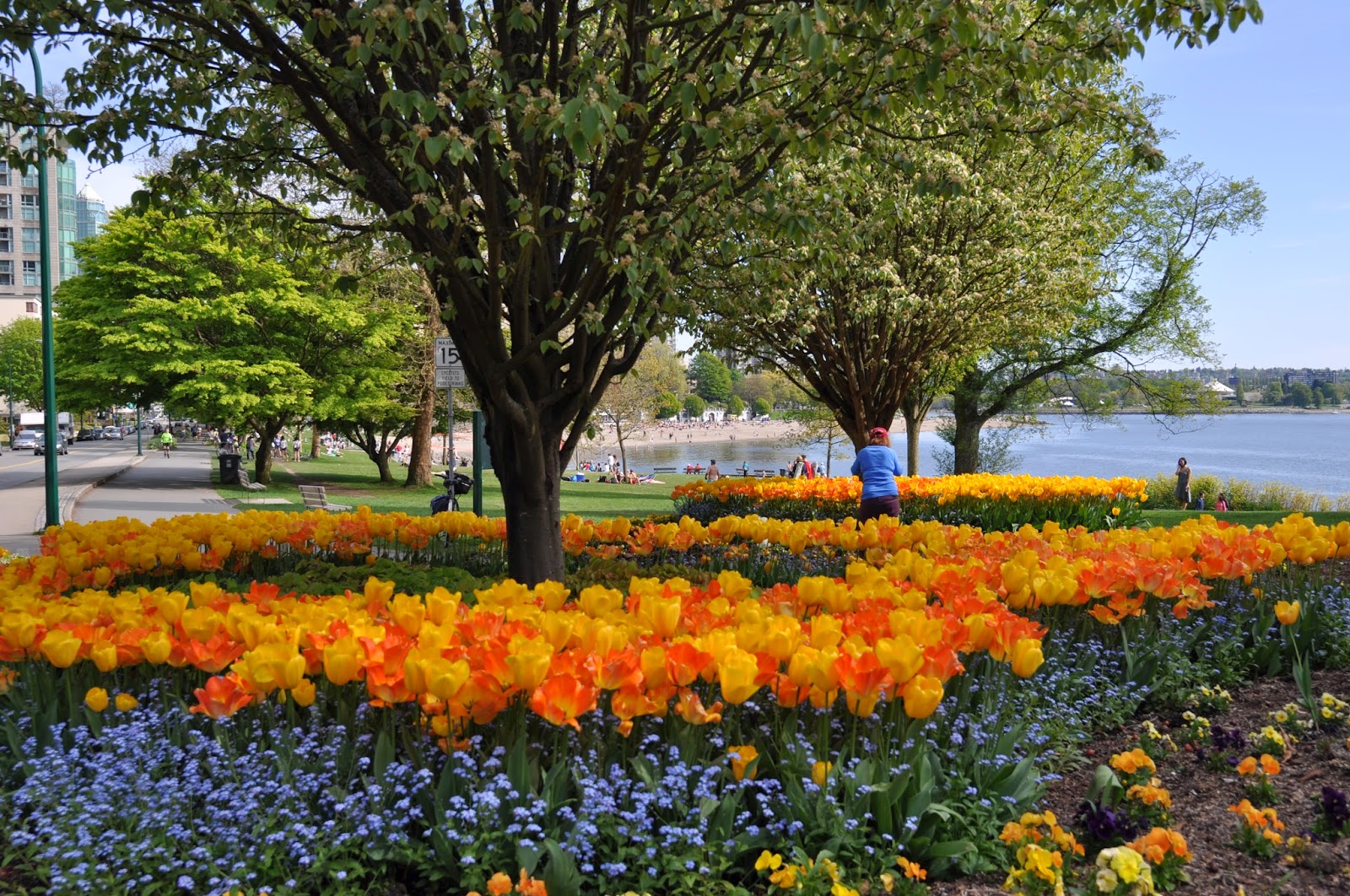 Zooming in a bit closer.. 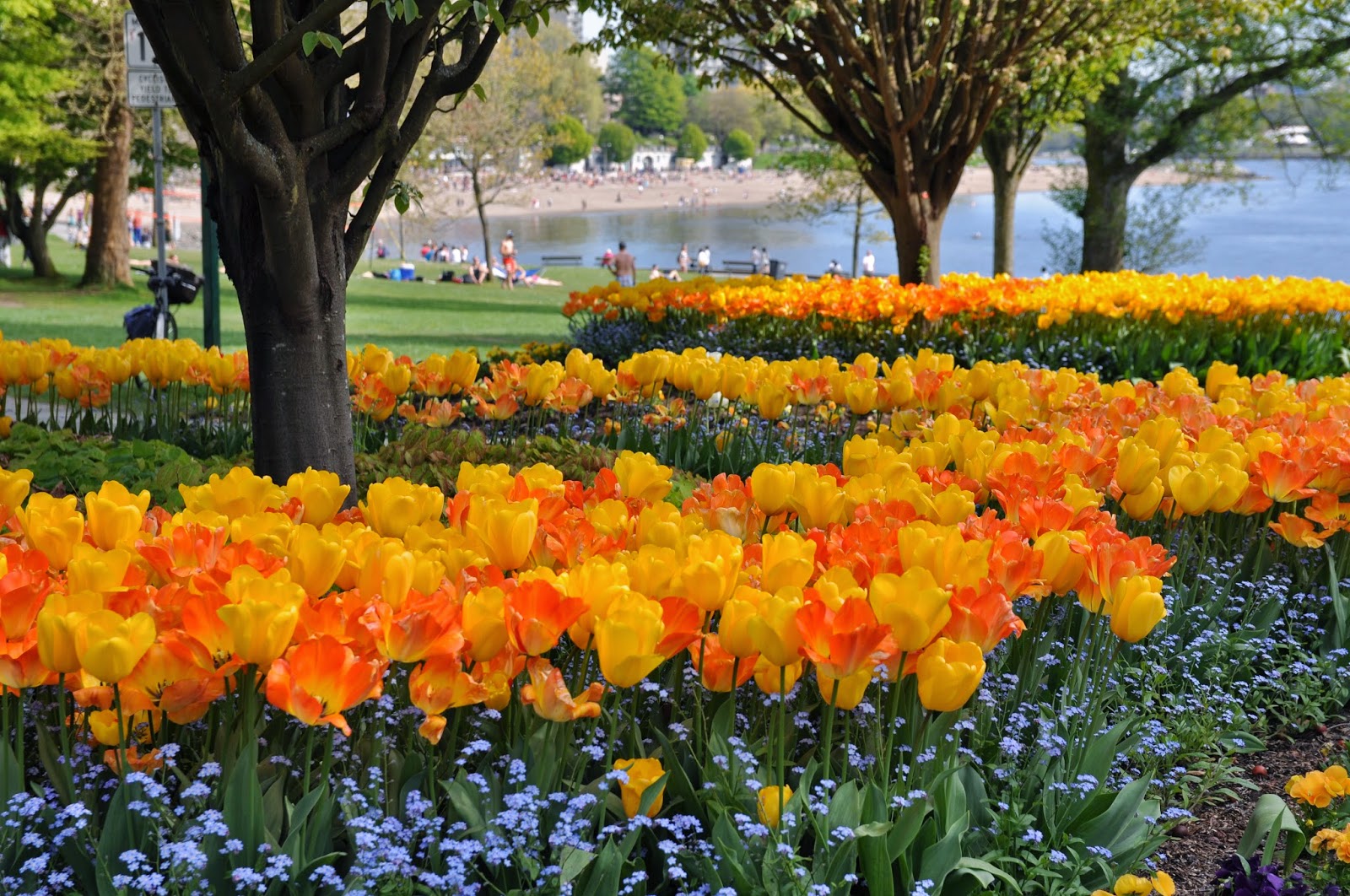 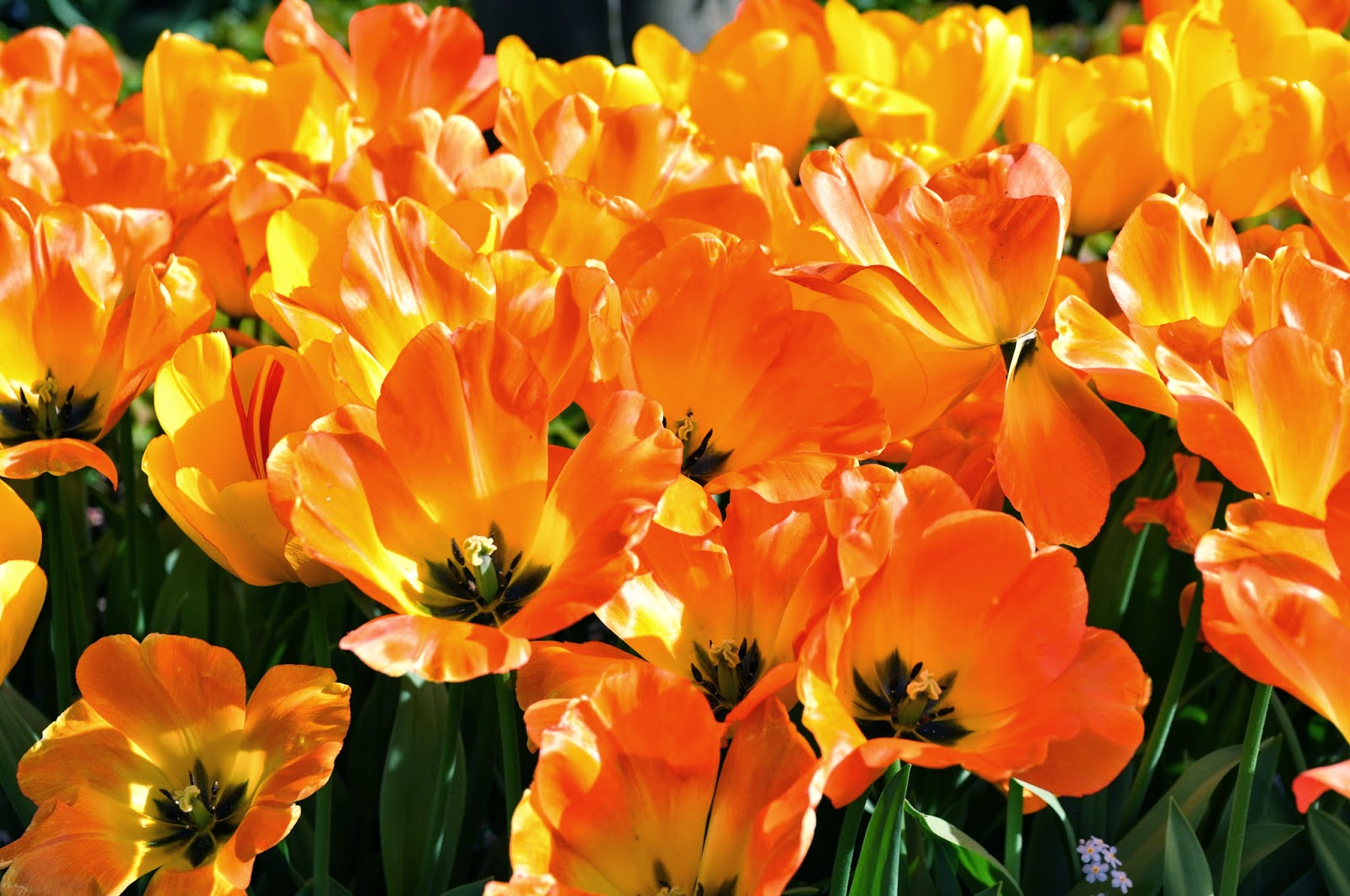 I locked up the bike and took Black Jack across the street to check on the heronry.  This gives you a pretty good view of a spot I have spent many hours enjoying.  You can just make out some small brown clumps in the only two trees without colour.  That is the heronry. 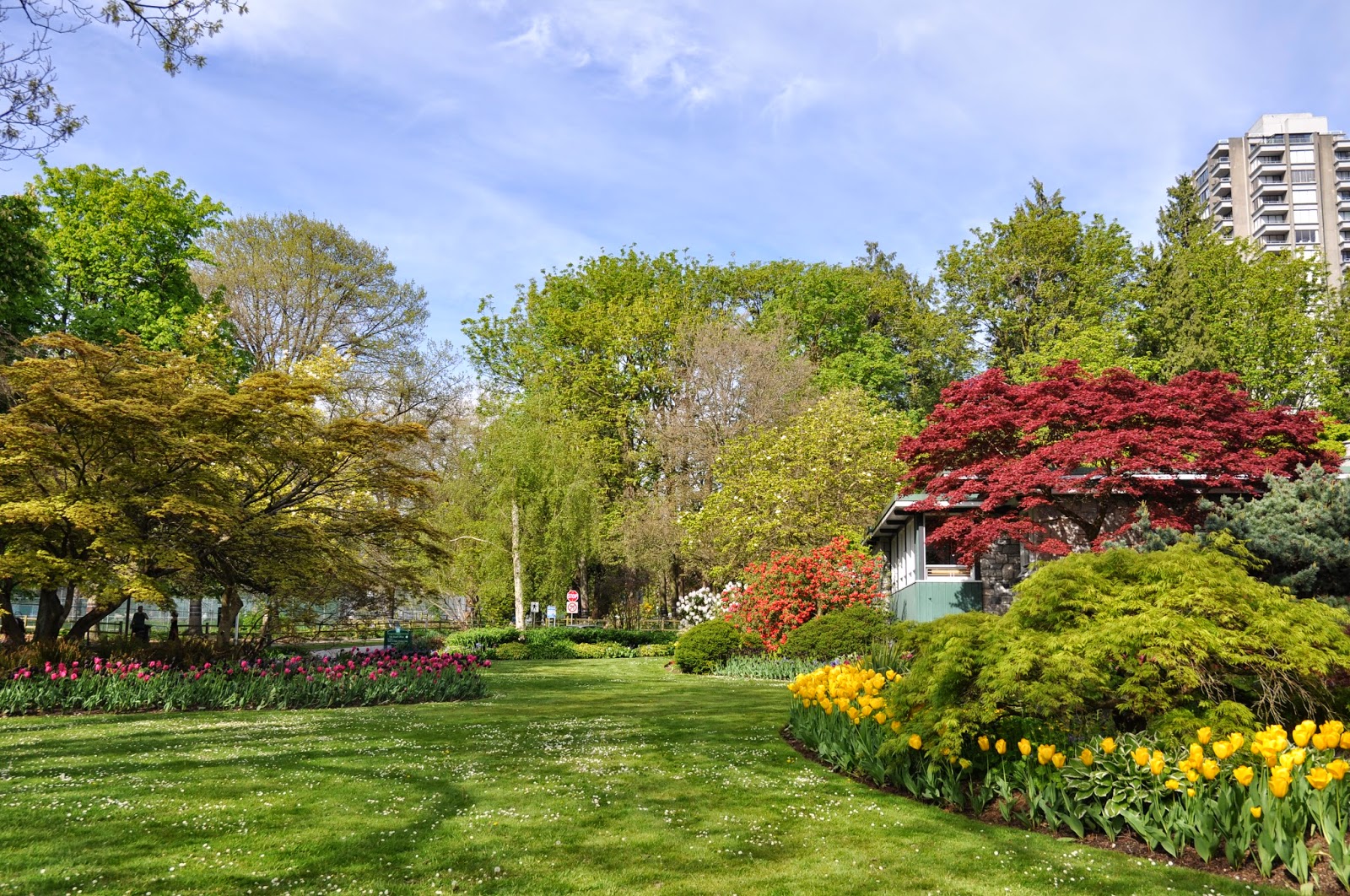 Here is a slightly closer view.  I learned from this heronry update site that there are a total of 119 nests, 90 of them occupied as of April. 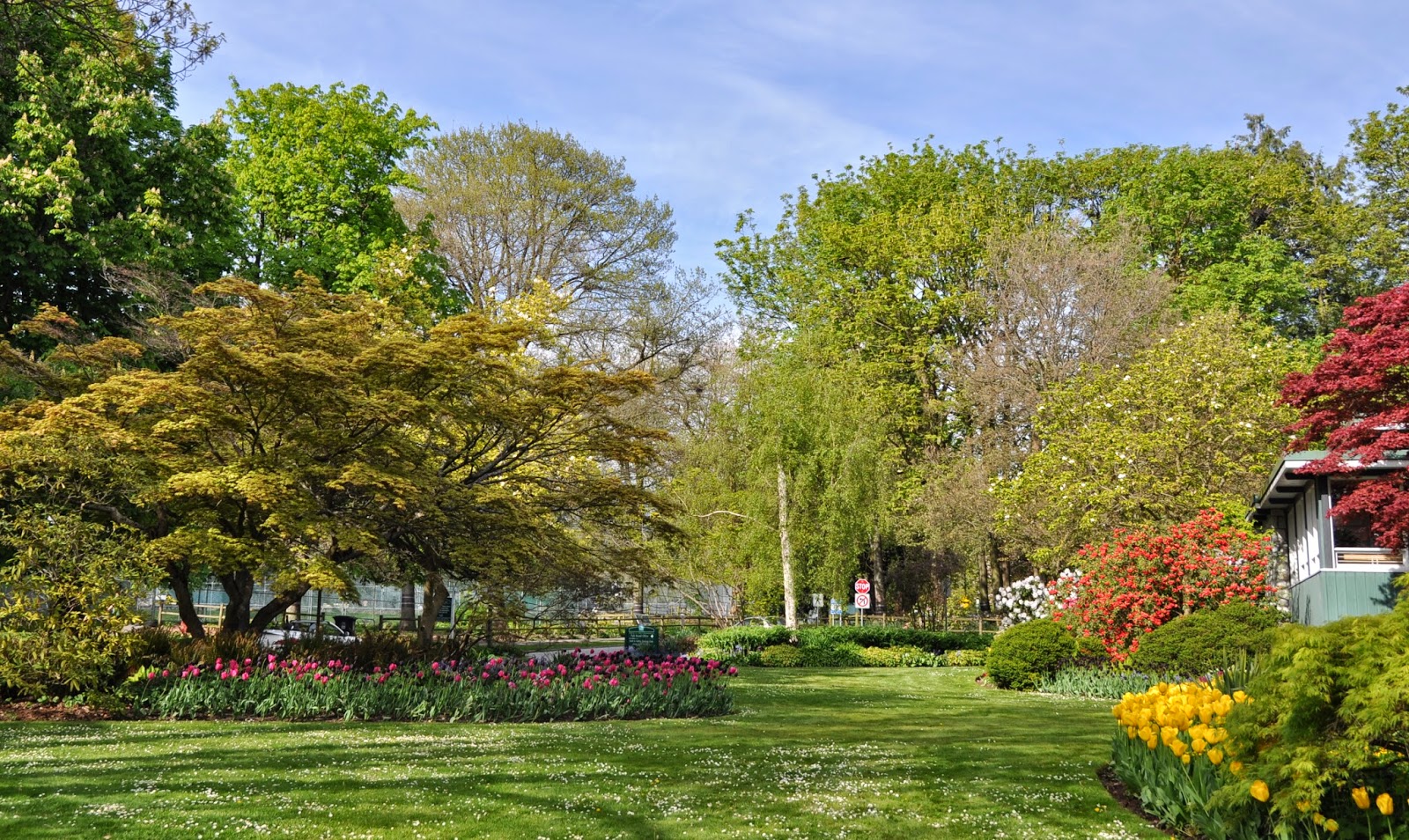 With my big lens, I looked back across the road and.. 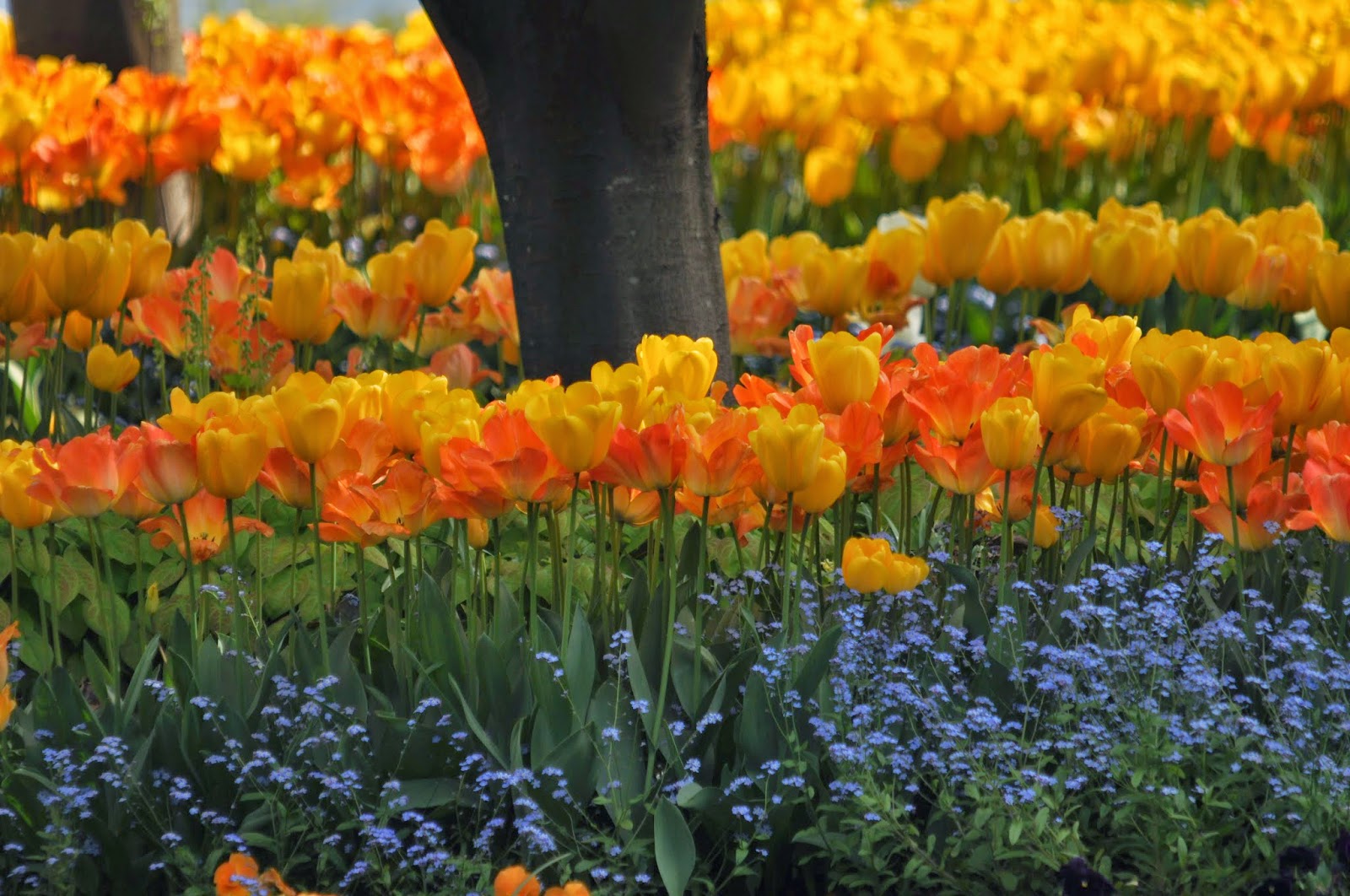 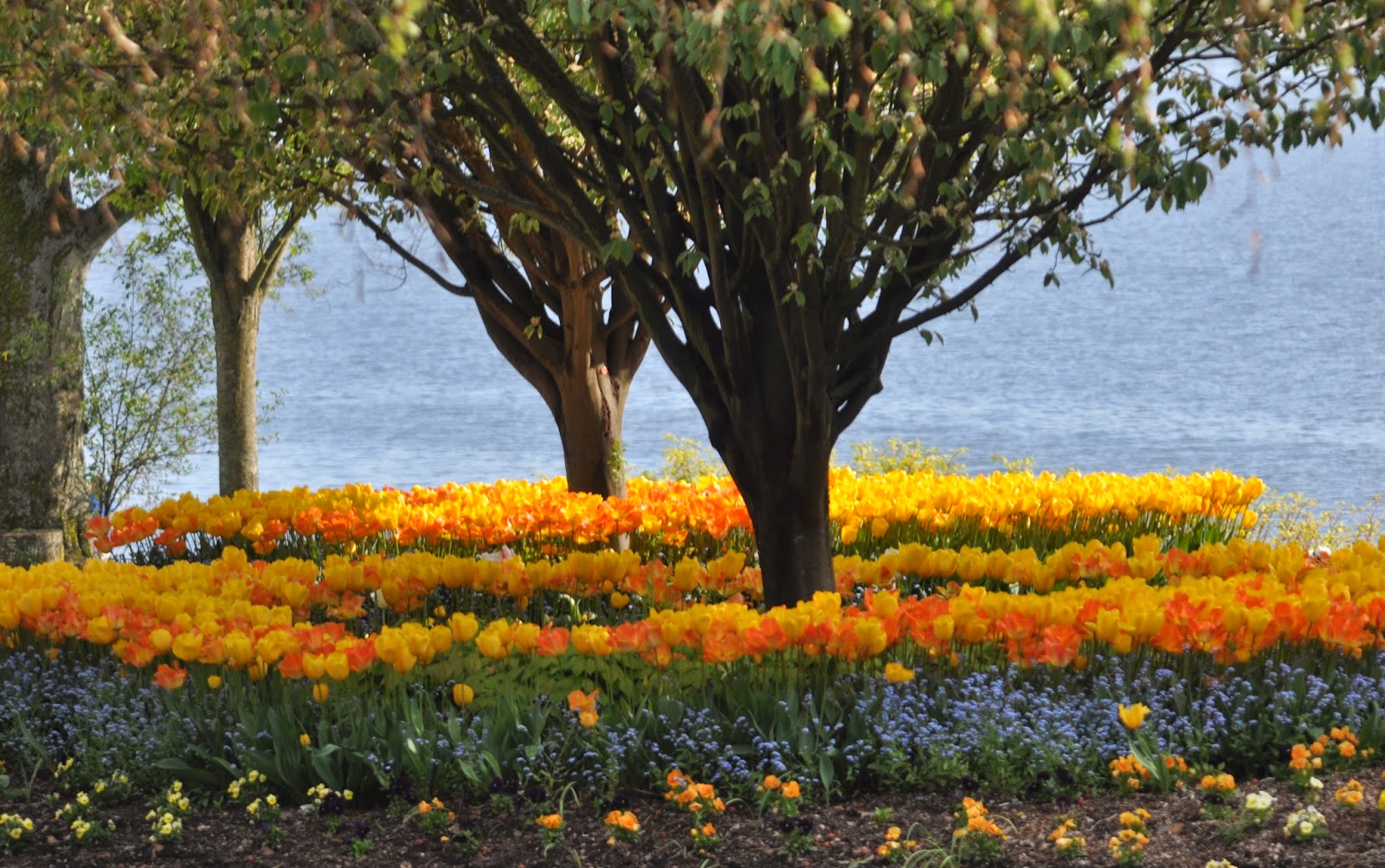 As I stood there, surrounded by beauty, this teeny little bird (a nuthatch?) appeared high above me.  I tried to catch it with the camera but it was under a lot of foliage and my capture didn't work.  Still, I rather like the photo.  Does that make sense?  :) 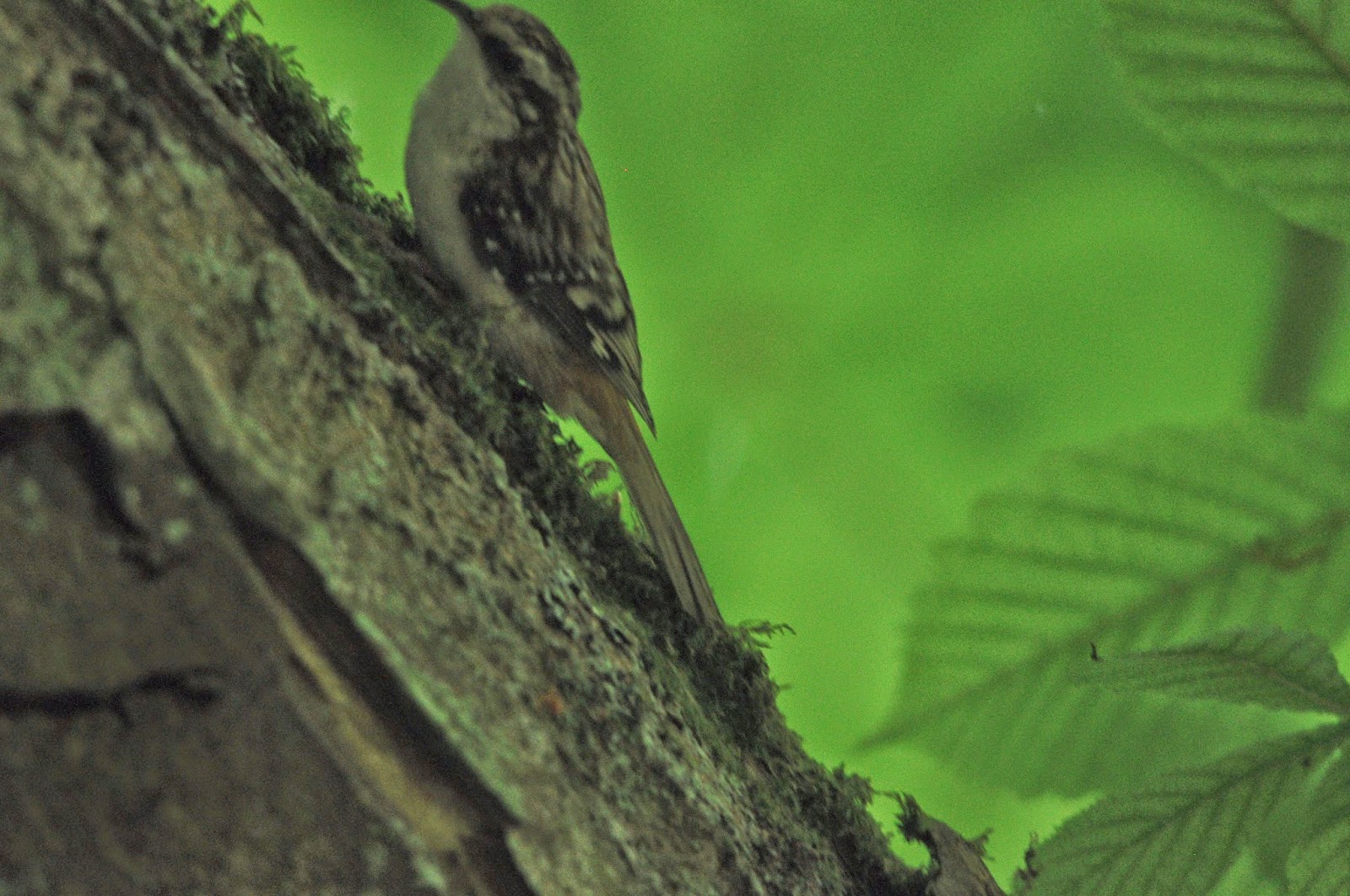 As I stood in the same spot, a fight broke out just across the road, complete with "shrieks" of anger and much scuffling.  My lens was still set to catch light under the above tree, so all of these shots were over-exposed.  I believe that one of the two crows facing away from the camera had done something to anger the others. 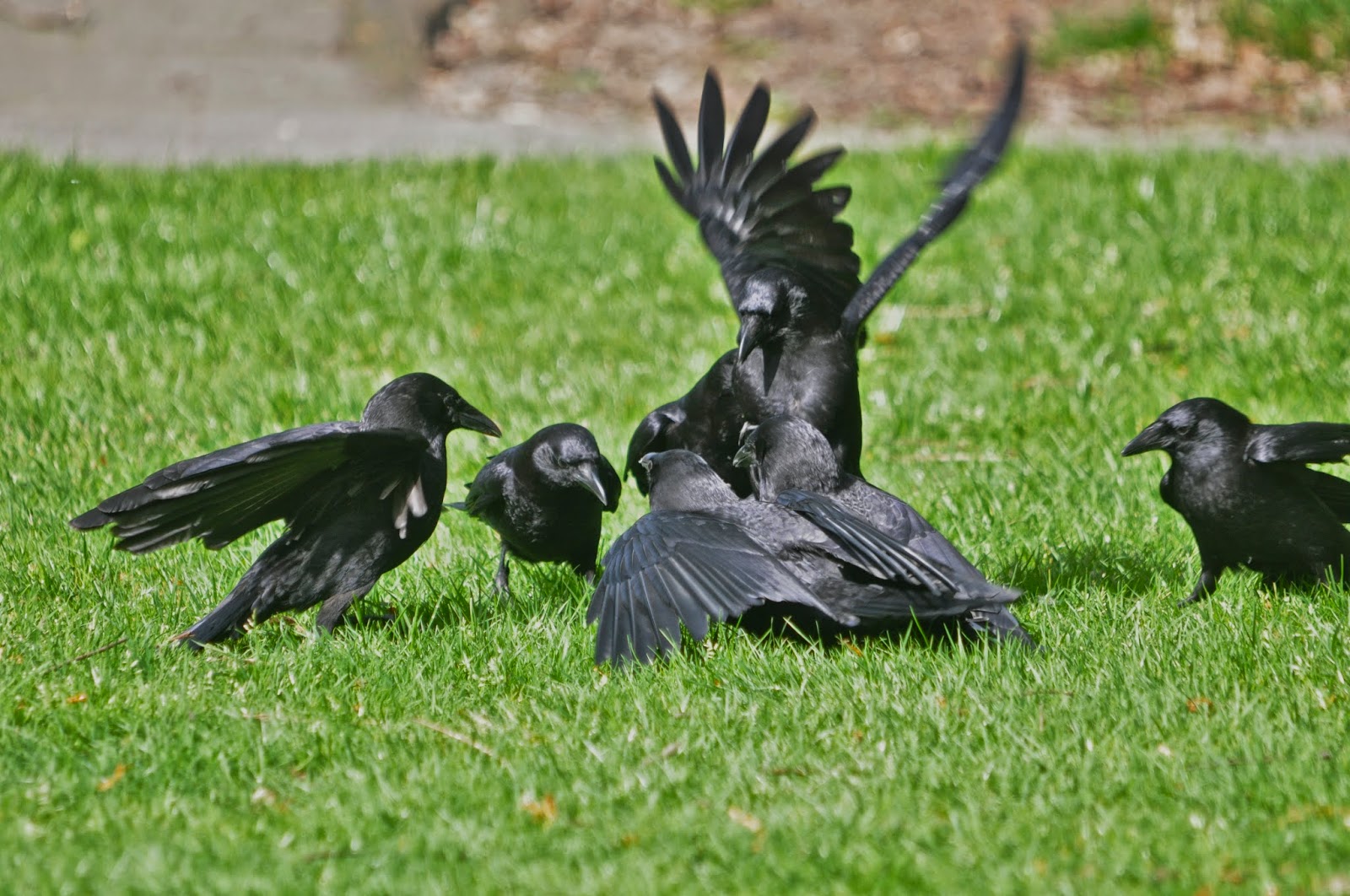 They are bringing it down here. 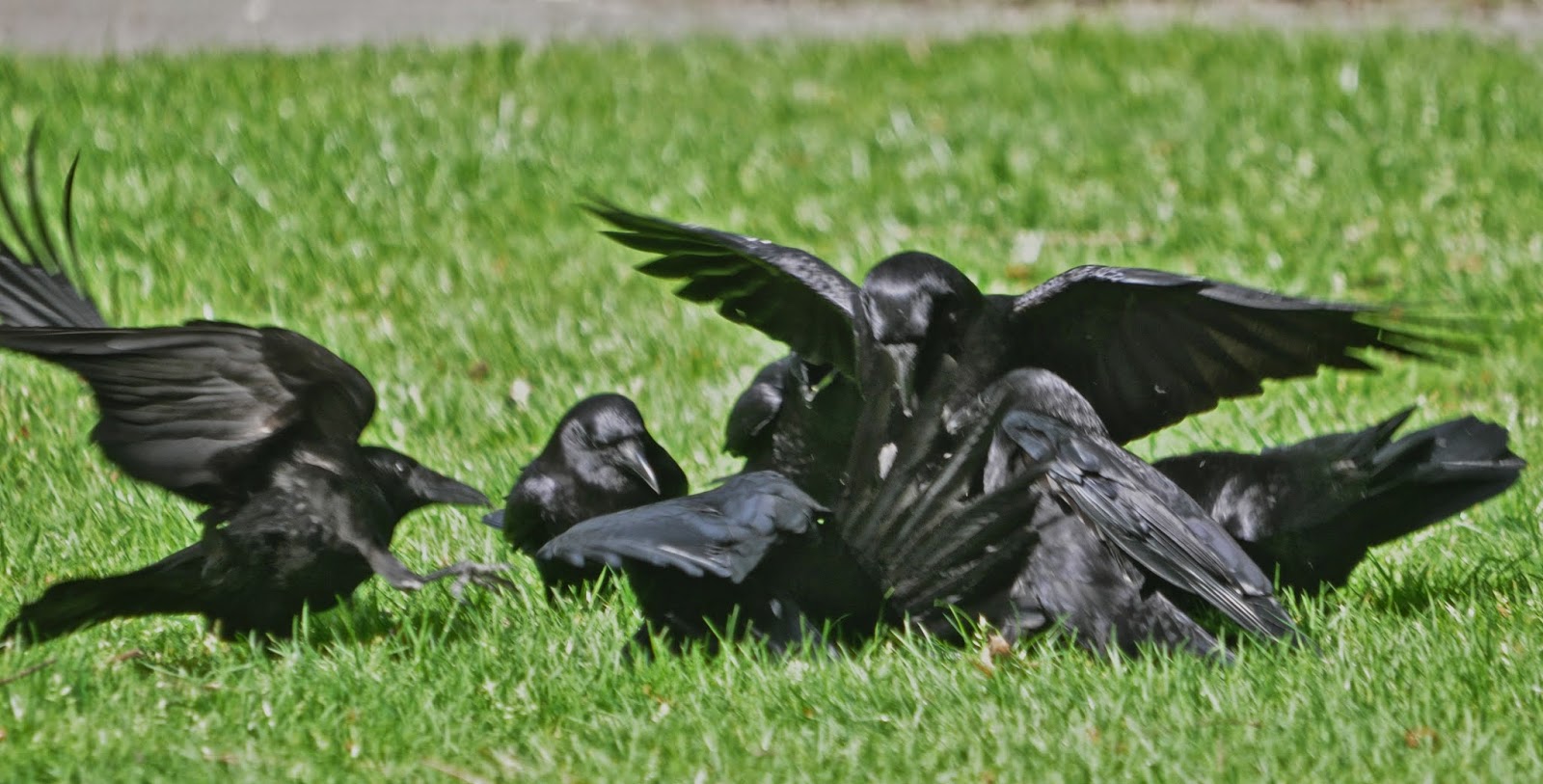 You can see it is flat on its back and facing up. 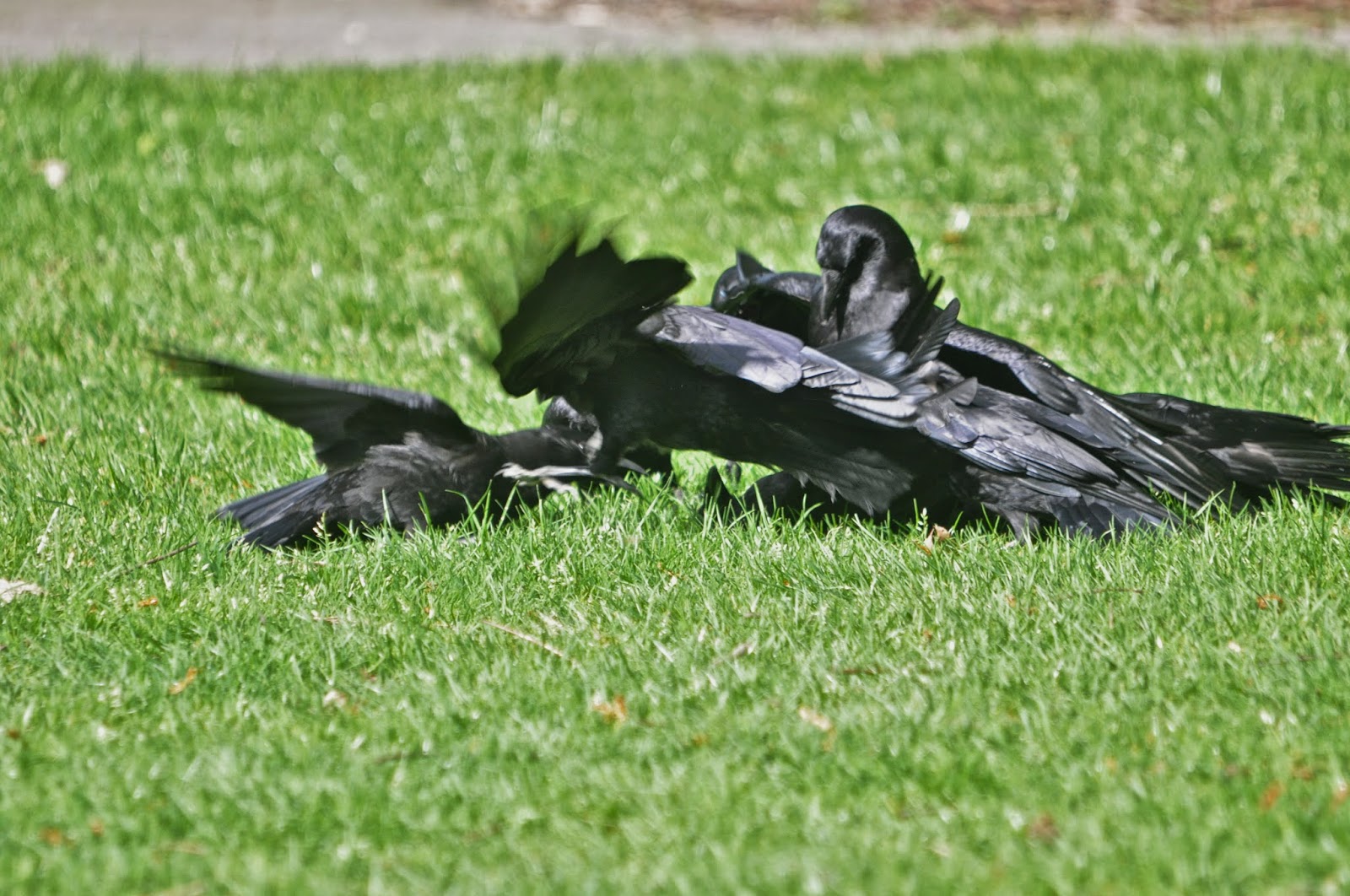 This only shows a few crows but many others watched or called from surrounding trees. 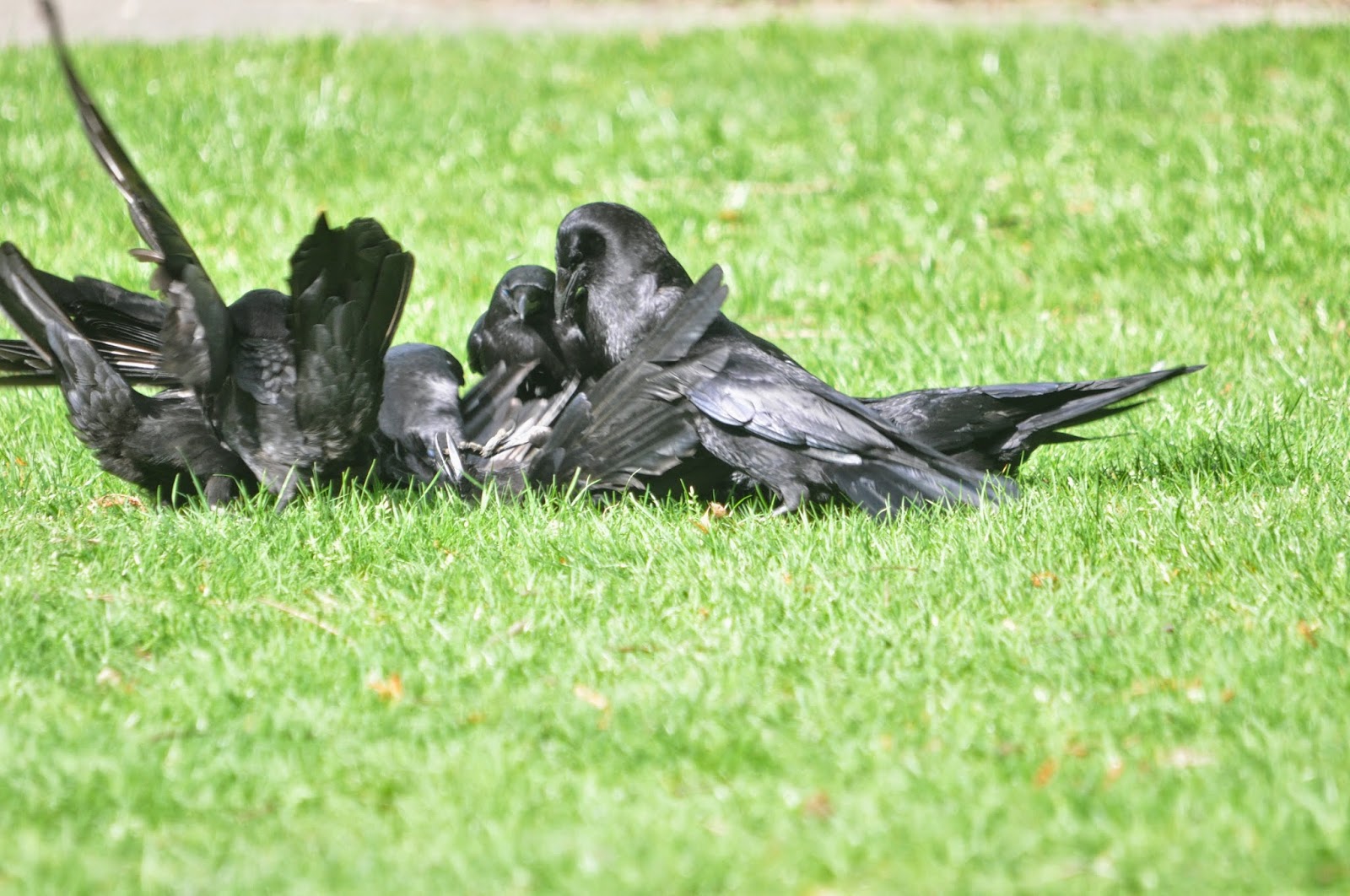 I'd like to think it may have been a juvenile that had overstepped boundaries and was being disciplined by family members.. 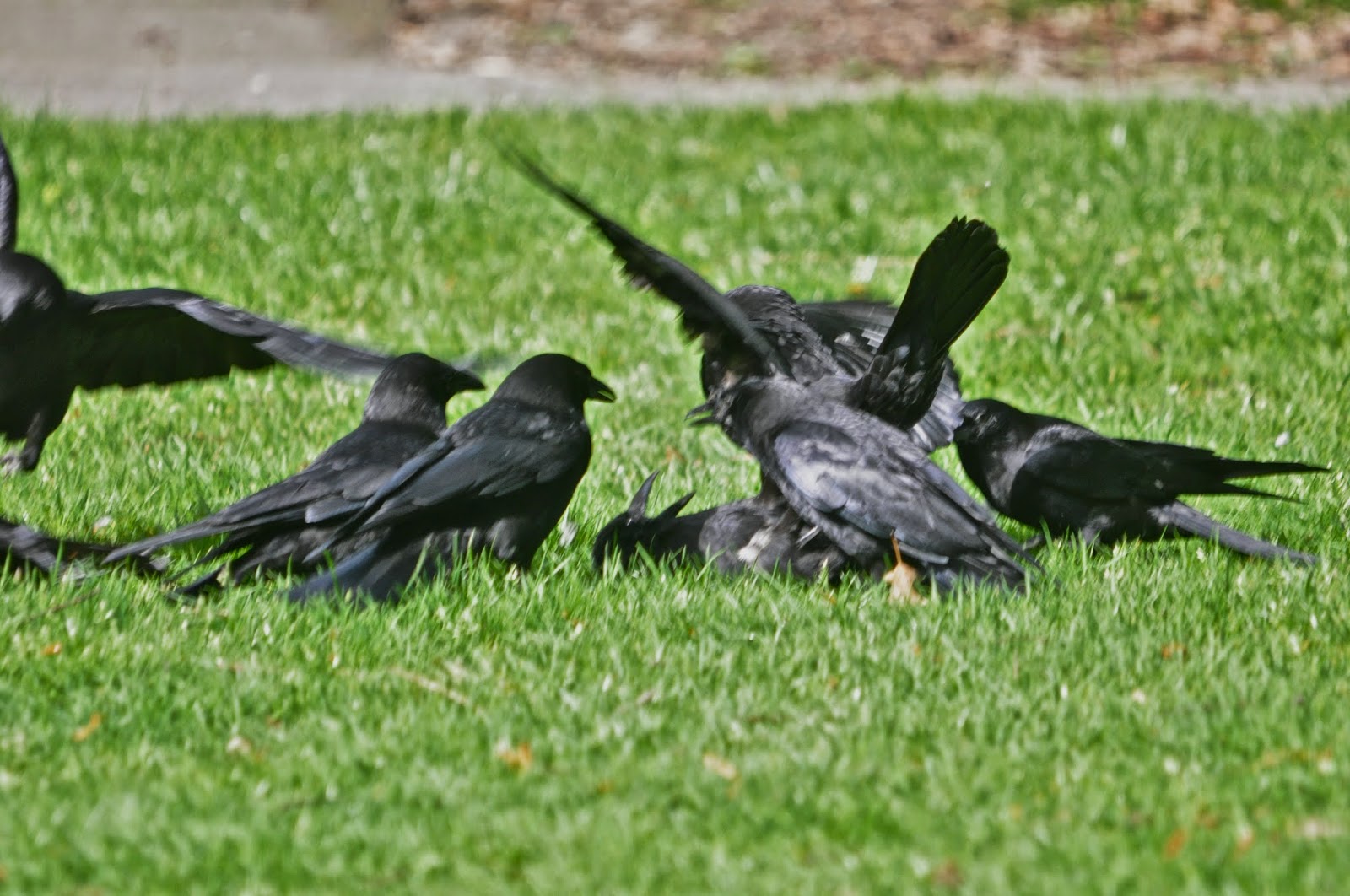 but who knows?  So many mysteries of nature.  I became certain they were going to kill it.. 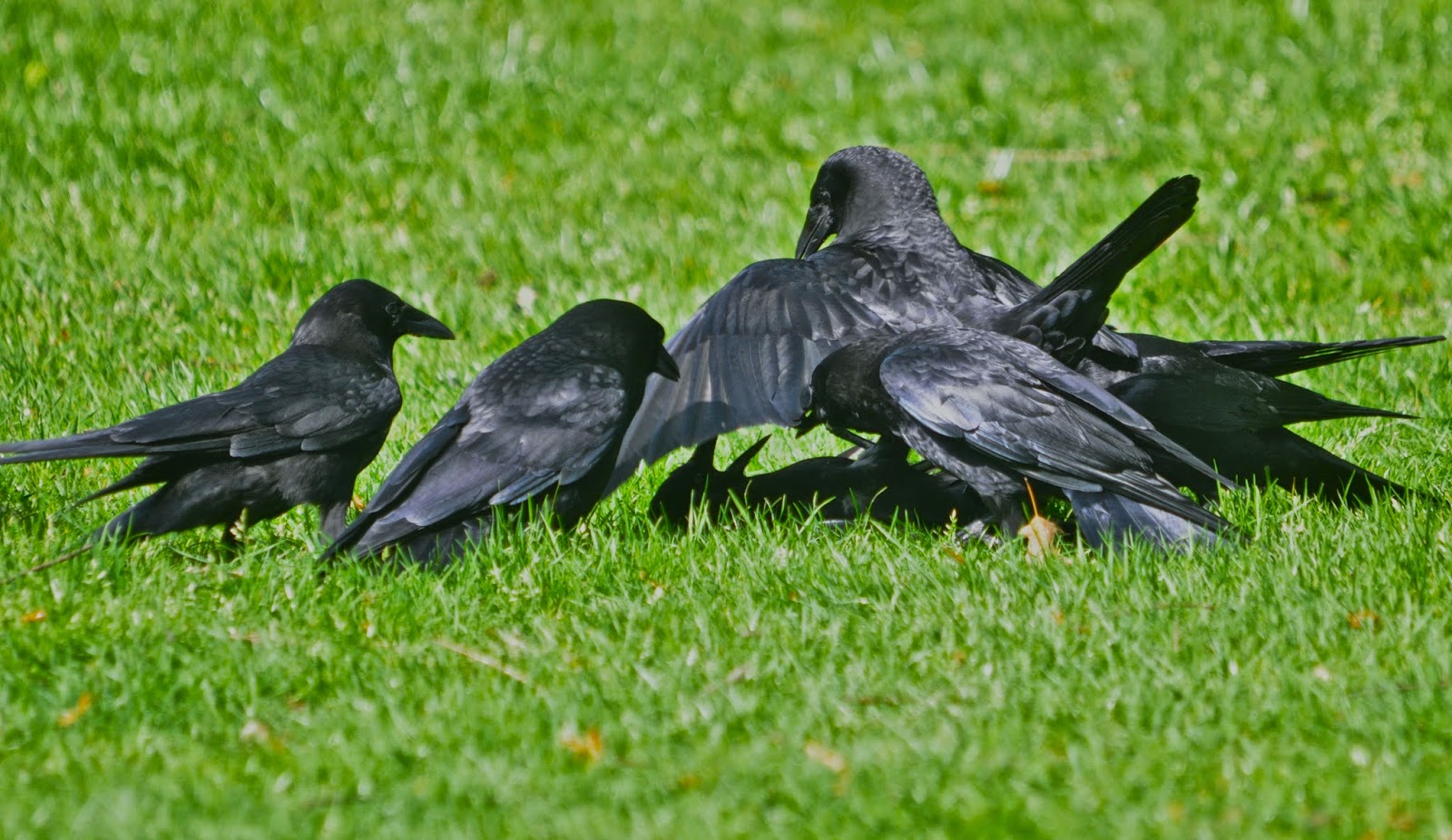 but it began to rise here, and suddenly all the crows took off.  That may have had something to do with the fact that I ran towards them, saying something like, "Hey, you guys.  Let him be."  So much for letting nature take its course :)  Later, I saw a lone and very quiet crow sitting all by him/herself in the crook of a branch under one of the heron nests.  I'm just glad s/he survived but have so many questions. 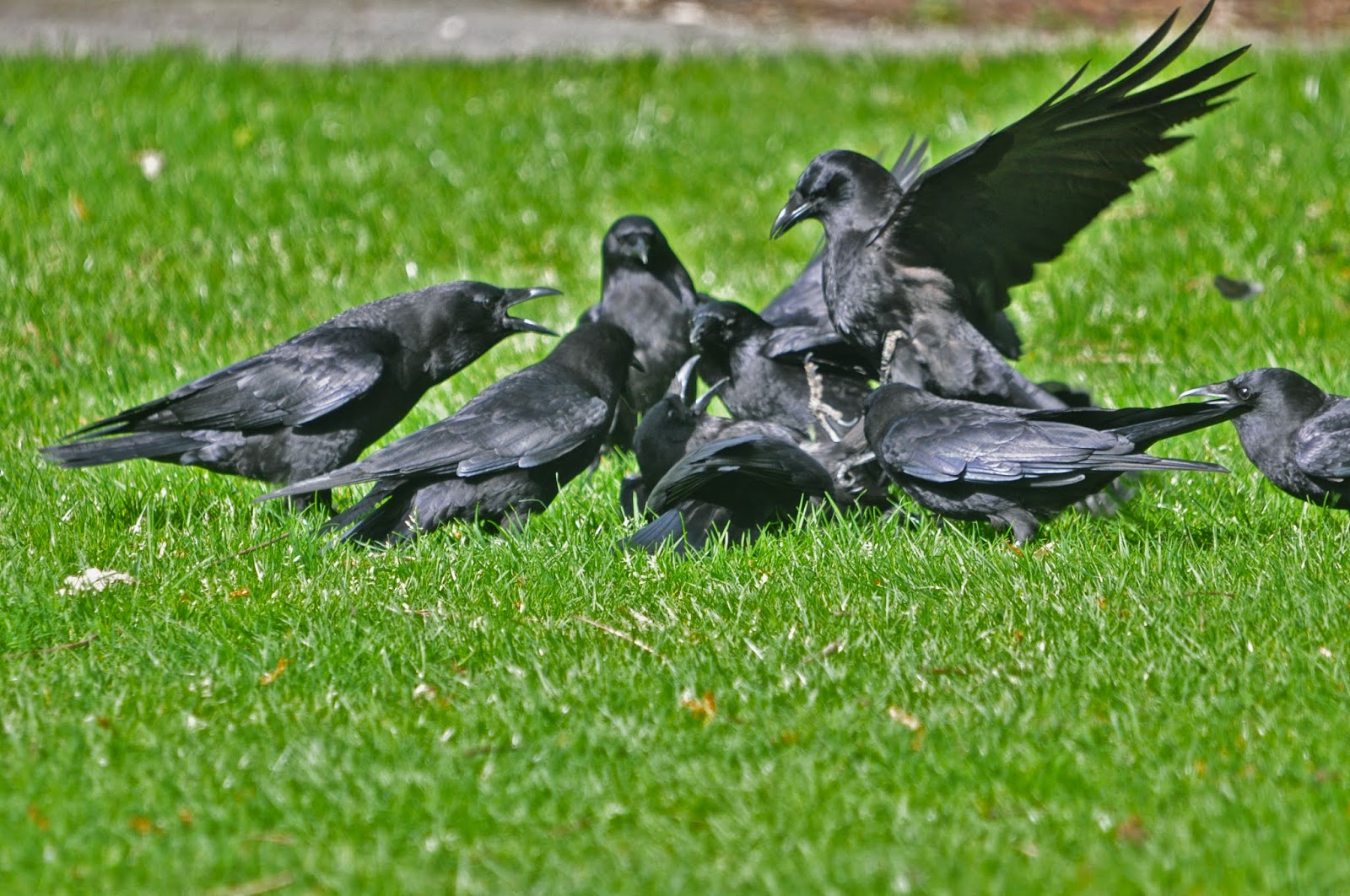 The herons were flying in and out of the nest, and there were many clucking sounds of young ones, but I couldn't see them and ended up with no useable shots.  I thought this may have been a baby, but surely it would be too large, so perhaps it was just a smaller female waiting for the male to return to the nest. 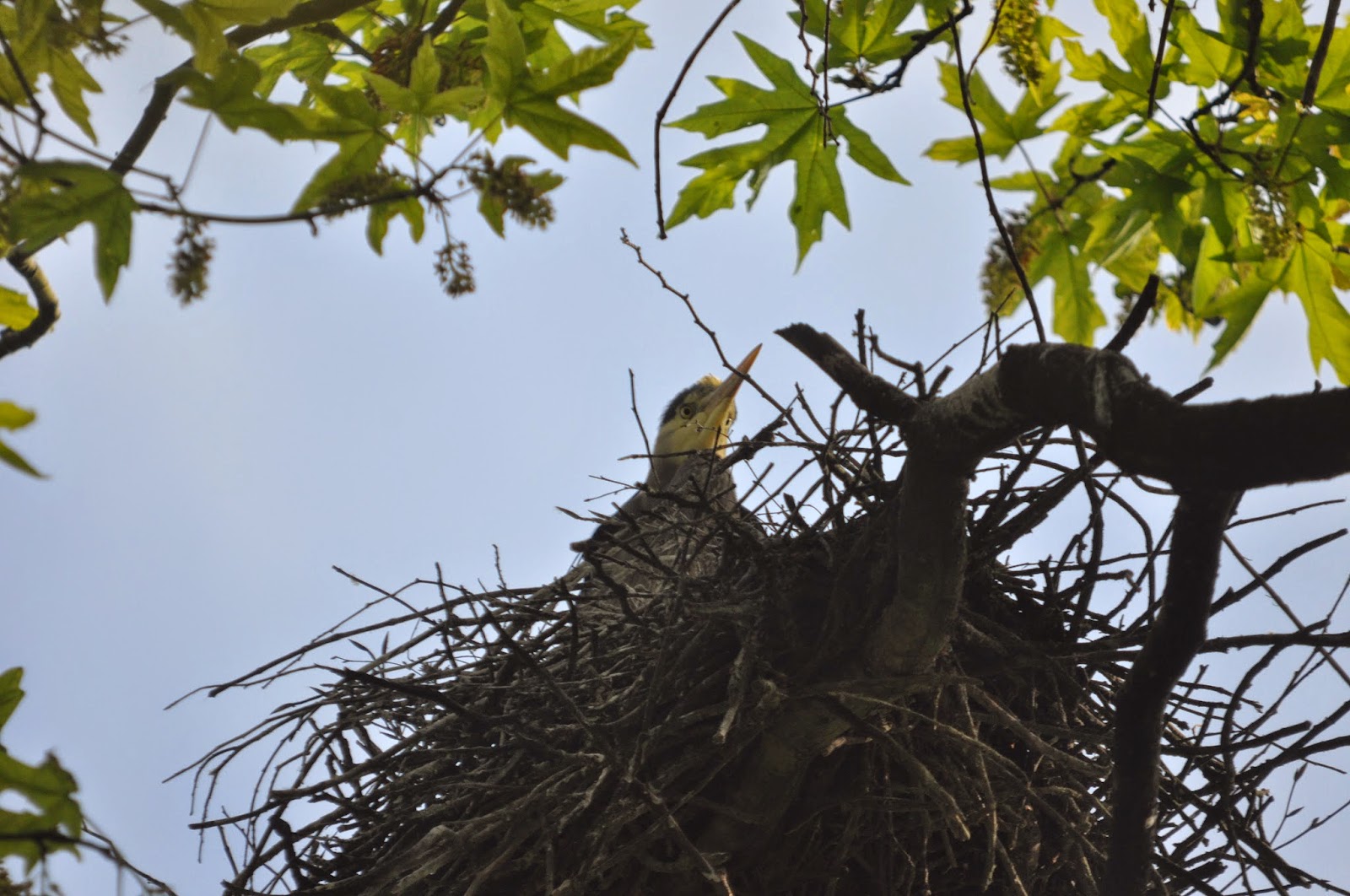 Black Jack and I continued around the lagoon.. 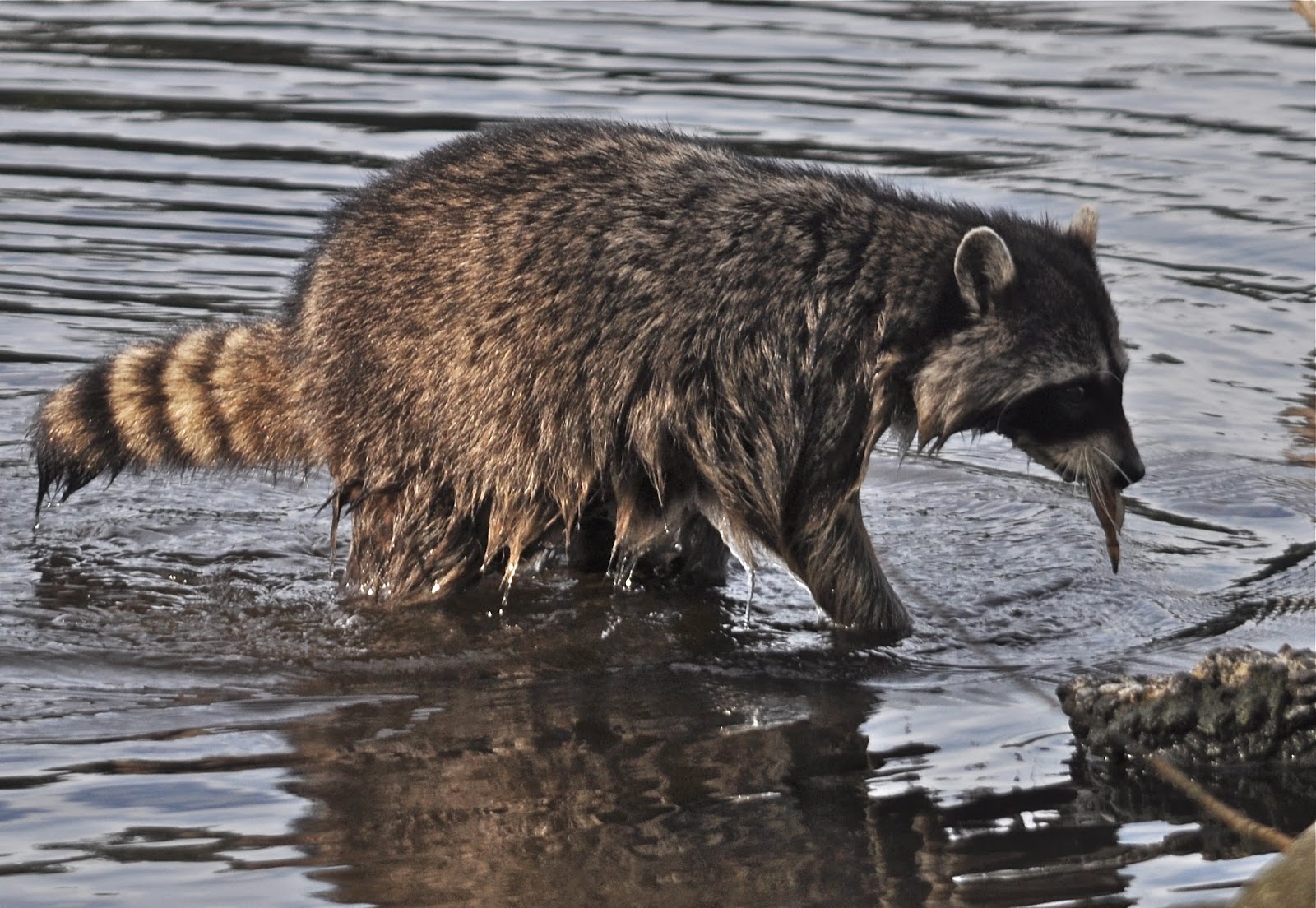 and spent a little time watching this racoon. 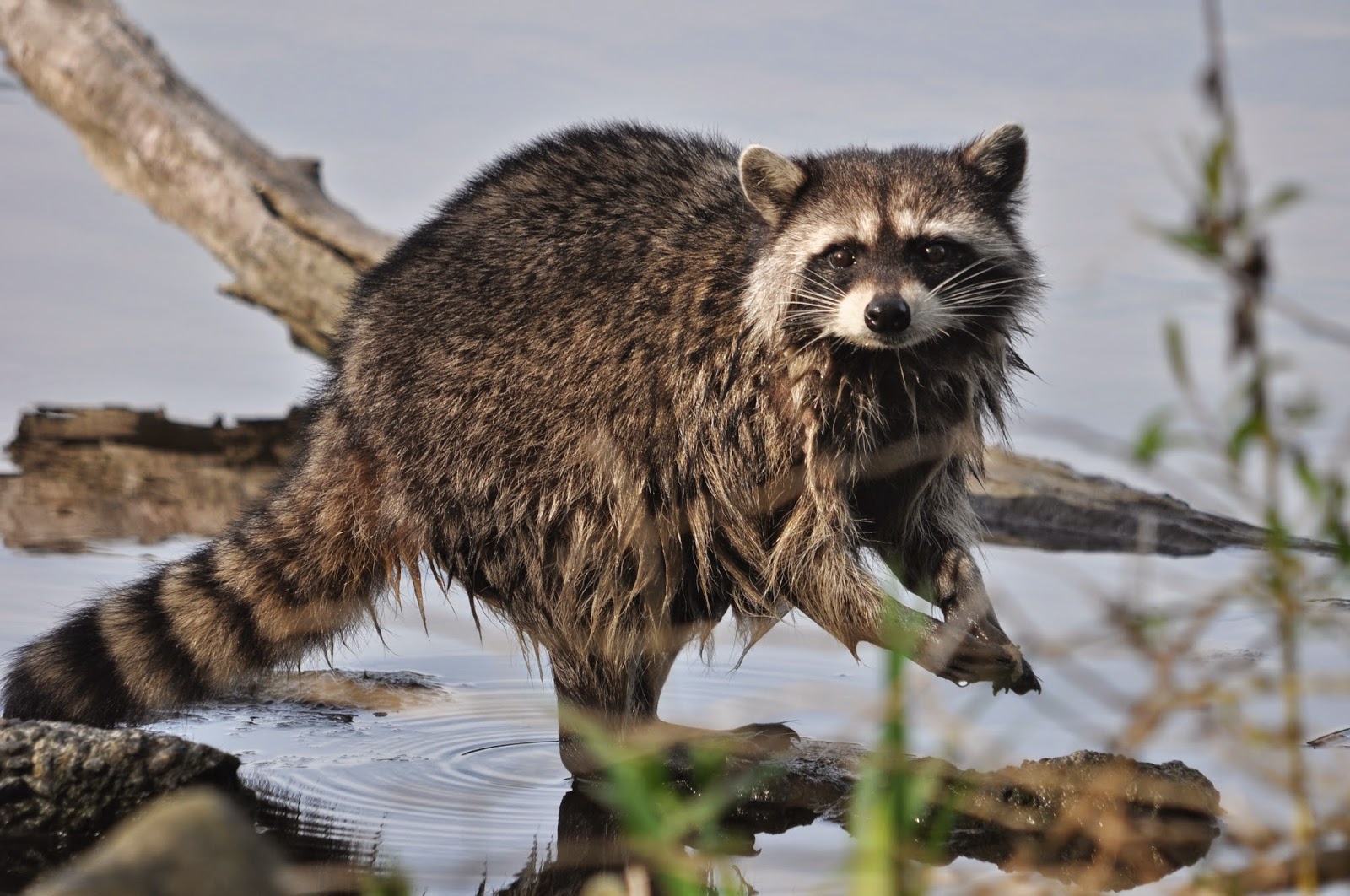 S/he finished the meal, washed up and then starting to approach.  We left the area :) 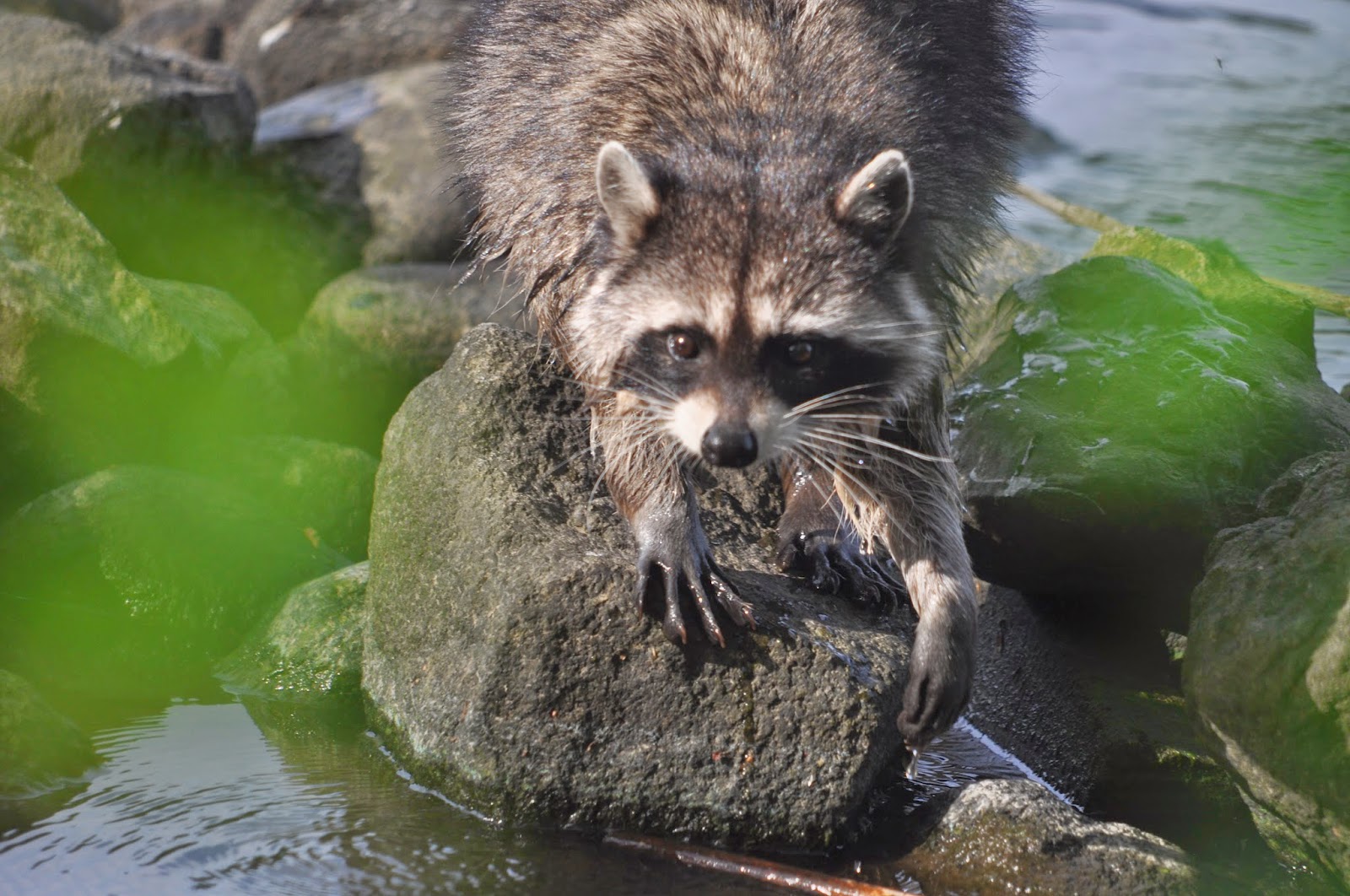 At the little bridge, I spotted these eyes checking us out. 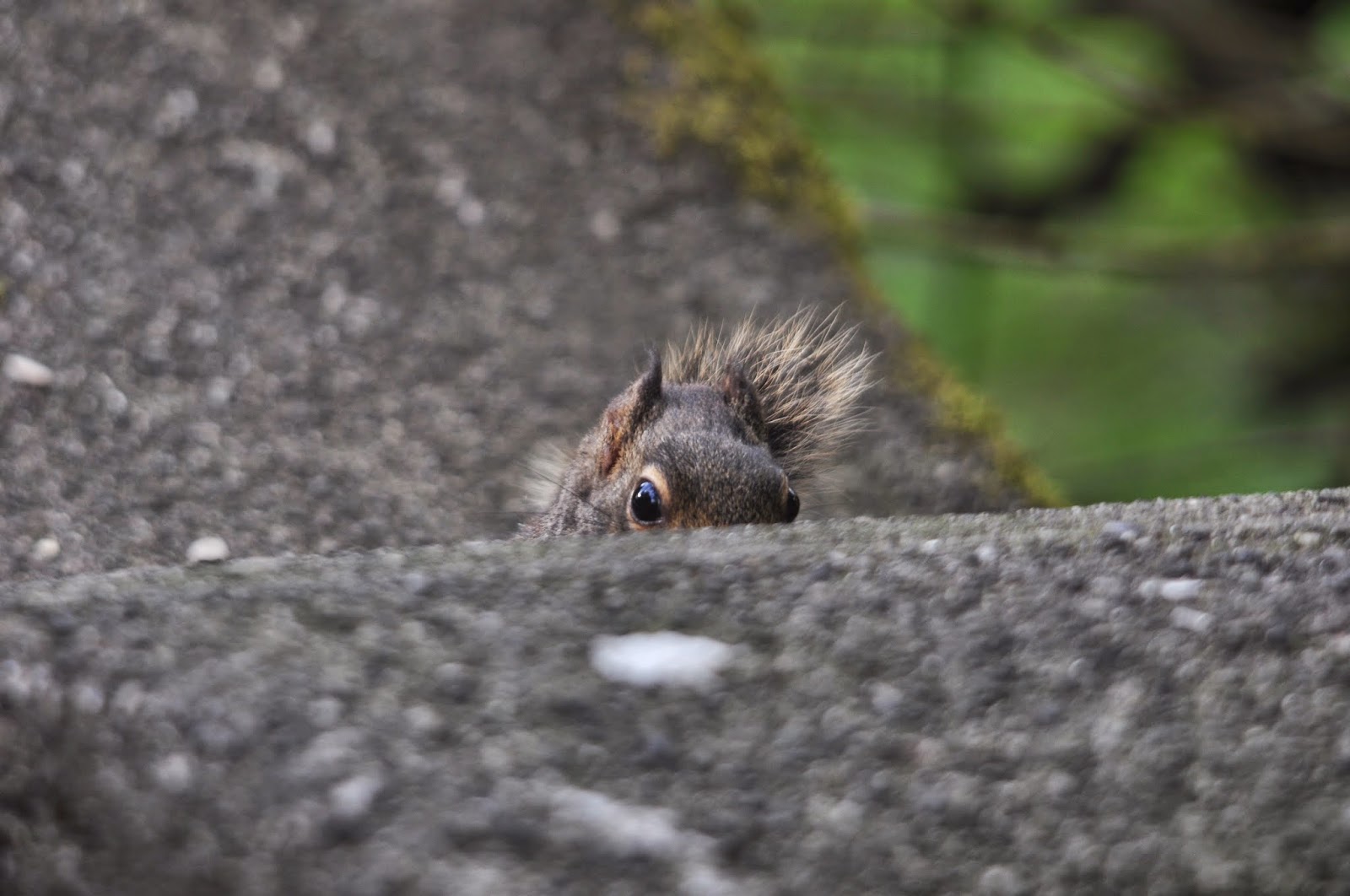 People feed the wildlife in the park in spite of signs everywhere explaining why this is not a good idea.  I limit myself to one seagull and a few crows near my apartment, but never feed at the park.  I do understand the temptation, but can see that it causes problems.  But, look at this little guy's dear little pink mouth! 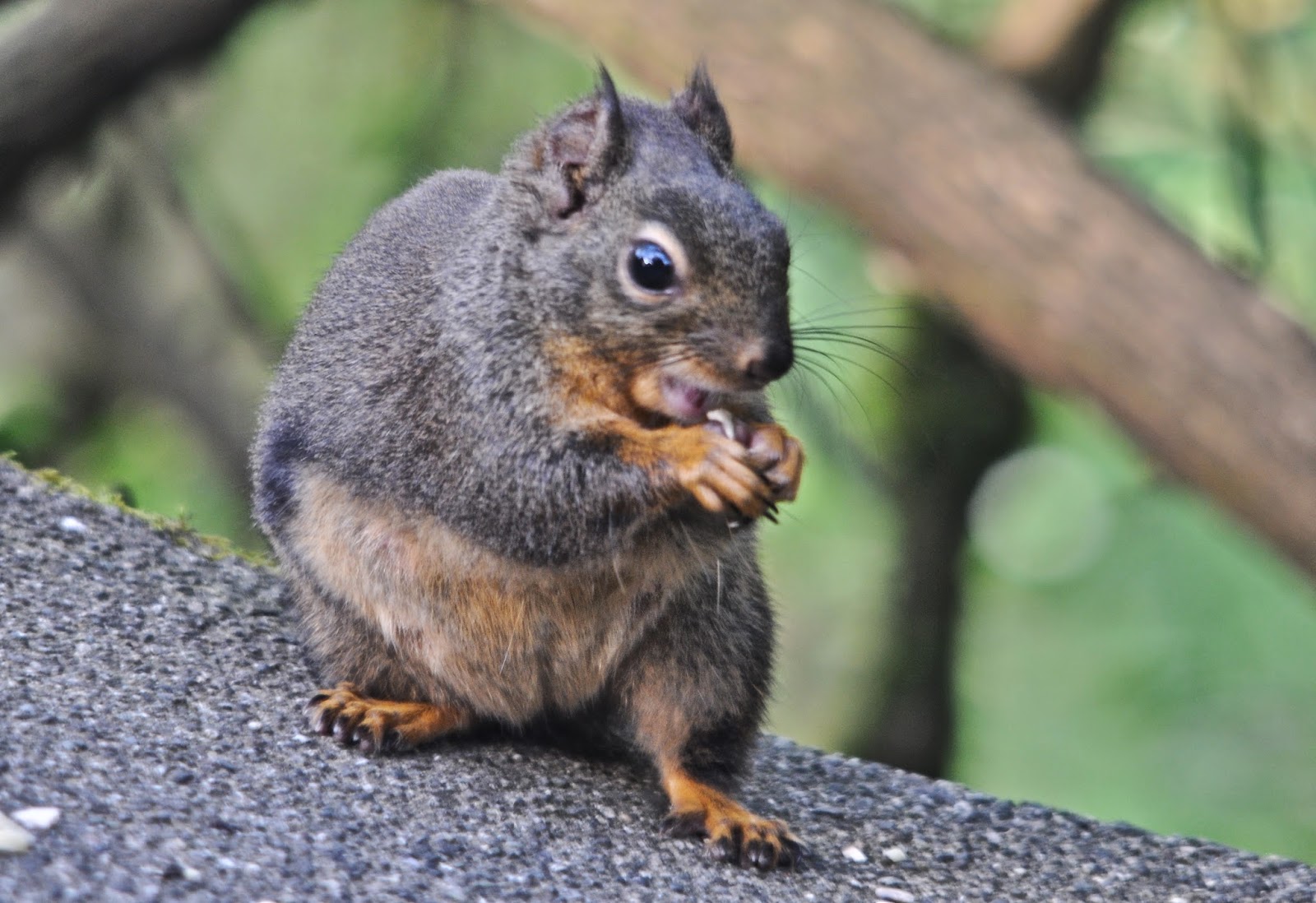 I'm going to call this a Chestnut-backed Chickadee. S/he had nabbed a squirrel leftover and retreated to a branch to devour it in peace. 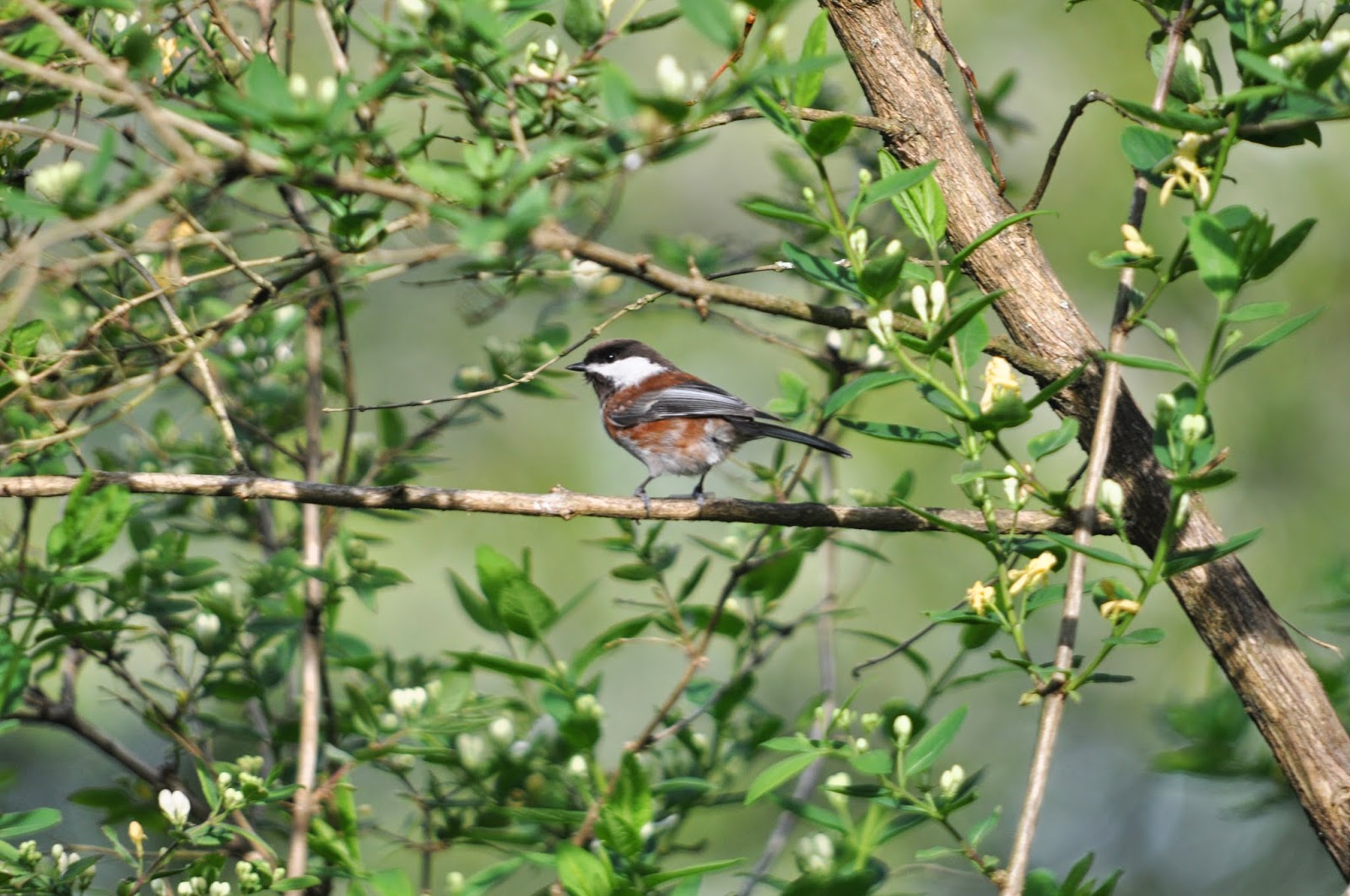 The same squirrel with less exposure brings out the orangey tones that will take us back to the Orange You Glad It's Friday theme.  Hop on over to that very fine meme for more orange tones from around the world.  Happy Friday, everyone! 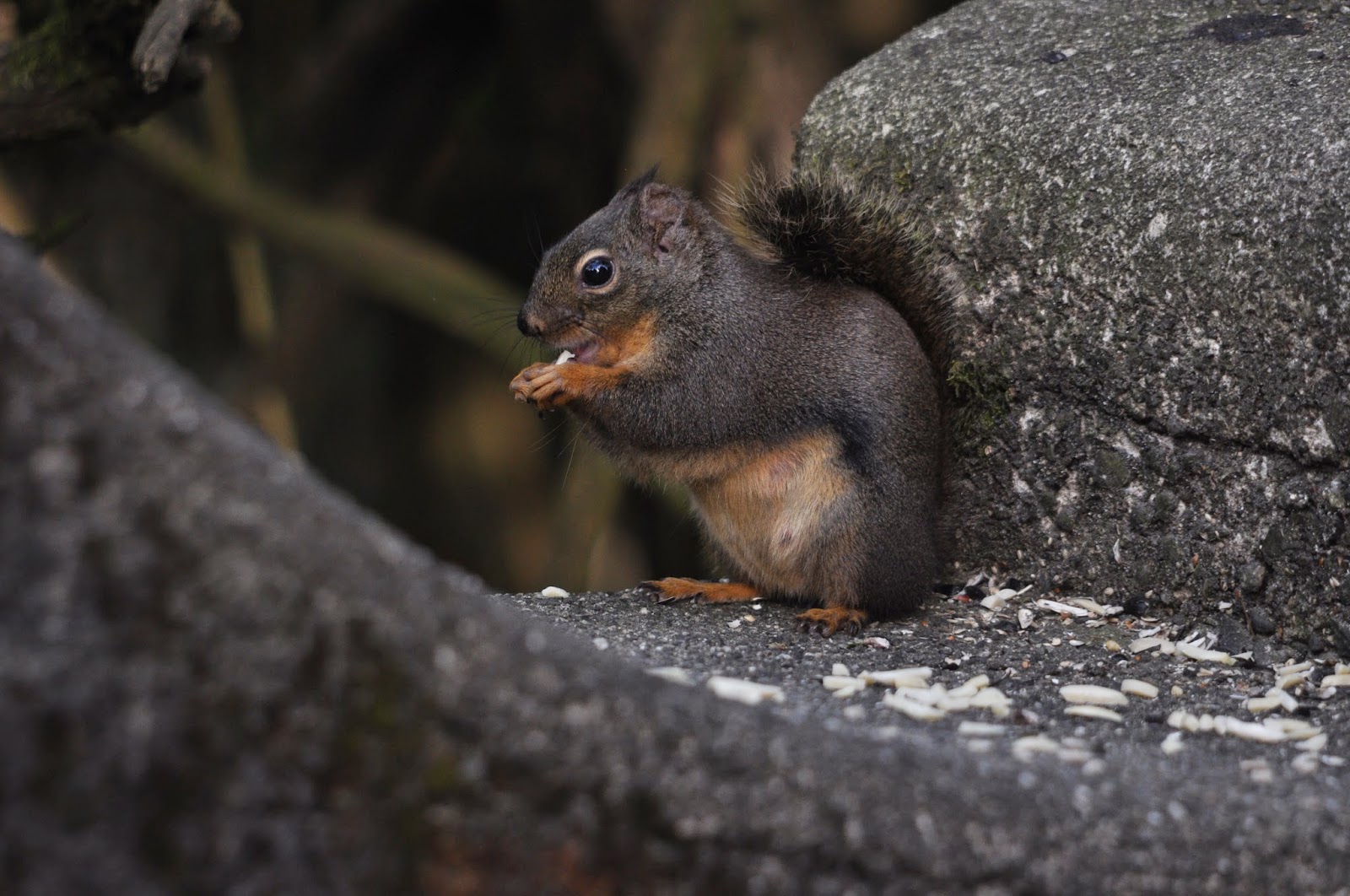