It was perfect, as in absolutely beautiful, biking weather yesterday in Vancouver.  One new species of critter had appeared along Sunset Beach, English Bay, and though I never managed to get the light quite right, I feel fairly sure they would like to make an appearance on Camera Critters (thank you, Misty!) and Saturday's Critters (thank you, Eileen!).

I watch Double-crested cormorants regularly.  They rest on a sculpture in False Creek that is about a minute's walk from our apartment.  In fact, quite some time ago, I watched a drama unfold that became a story of Oran, a juvenile practicing his landings.

However, I hadn't seen Pelagic Cormorants for a very long time.  To me, it seems they should have "crested" in their name, since I see what looks to me like a crest on their heads. 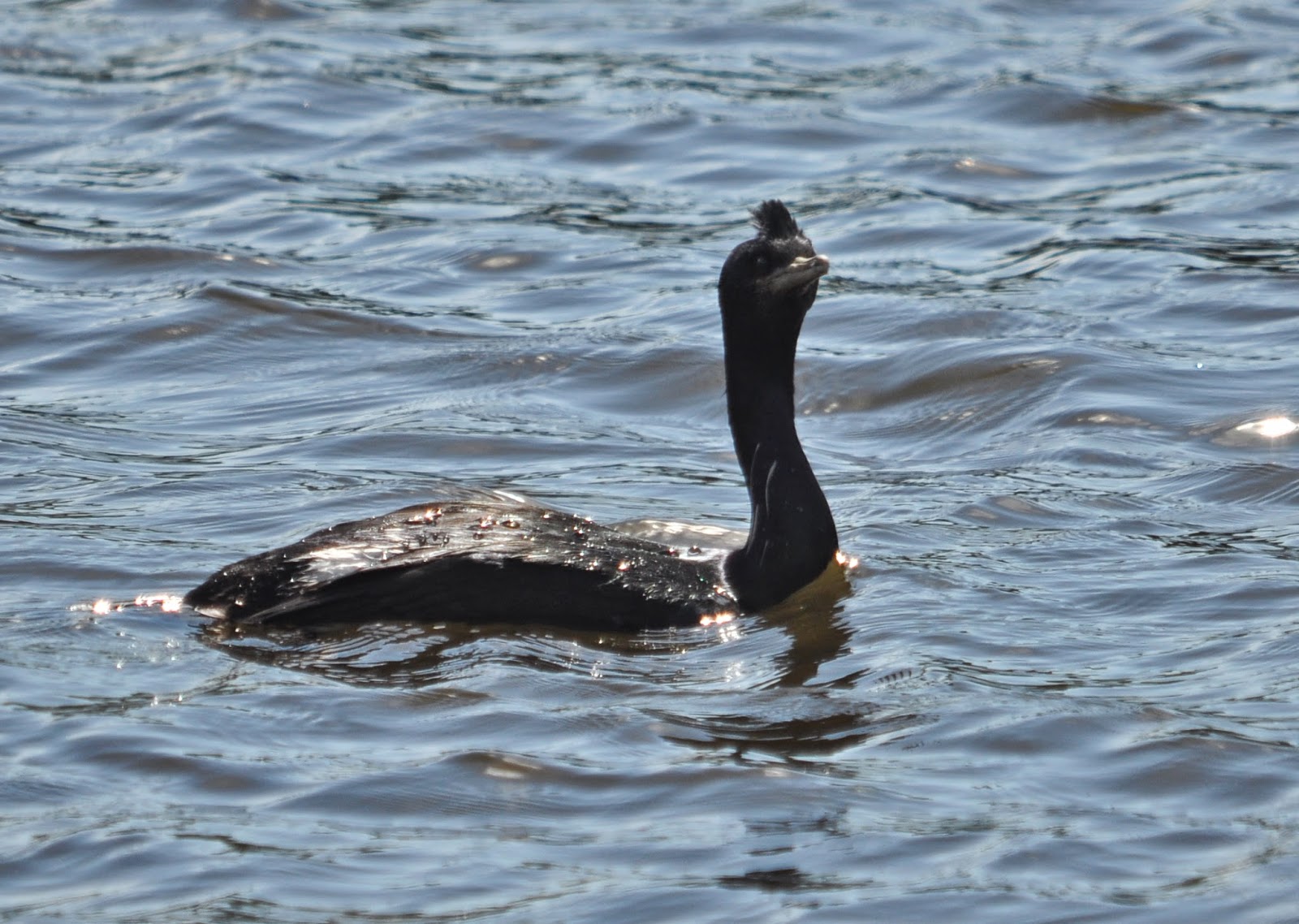 Bill and I parked our bikes and went down to the shore to play with Black Jack.  Between runs, I had an opportunity to watch the cormorants.  You can see Black Jack, just a little blur, heading to Bill to get her treat. 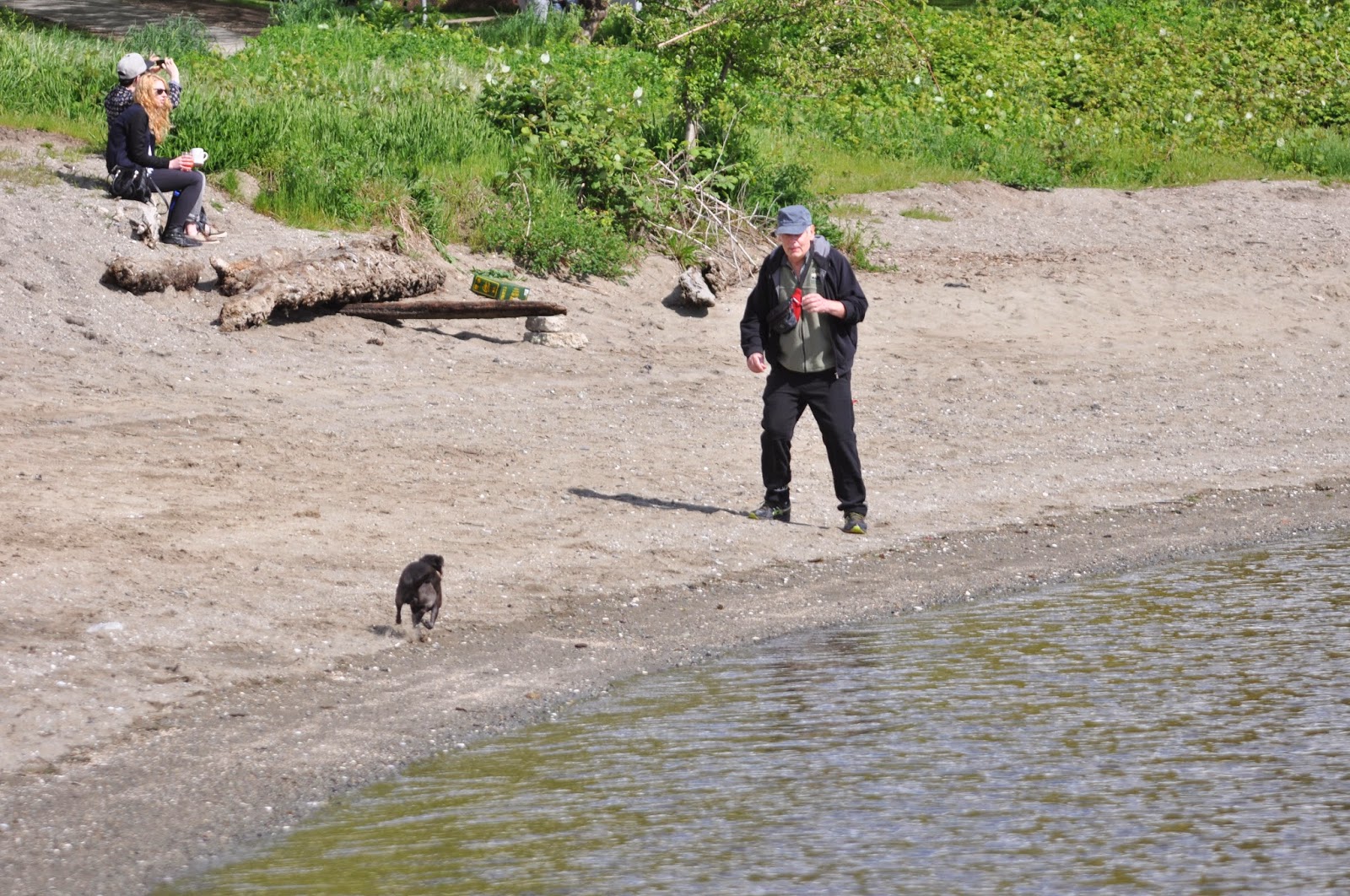 The game is that she is supposed to eat her (teeny) little treat and then come back to me.  However, she was a bit more interested in something right at the shore line, and Bill had to give her some direction before she played by our rules. 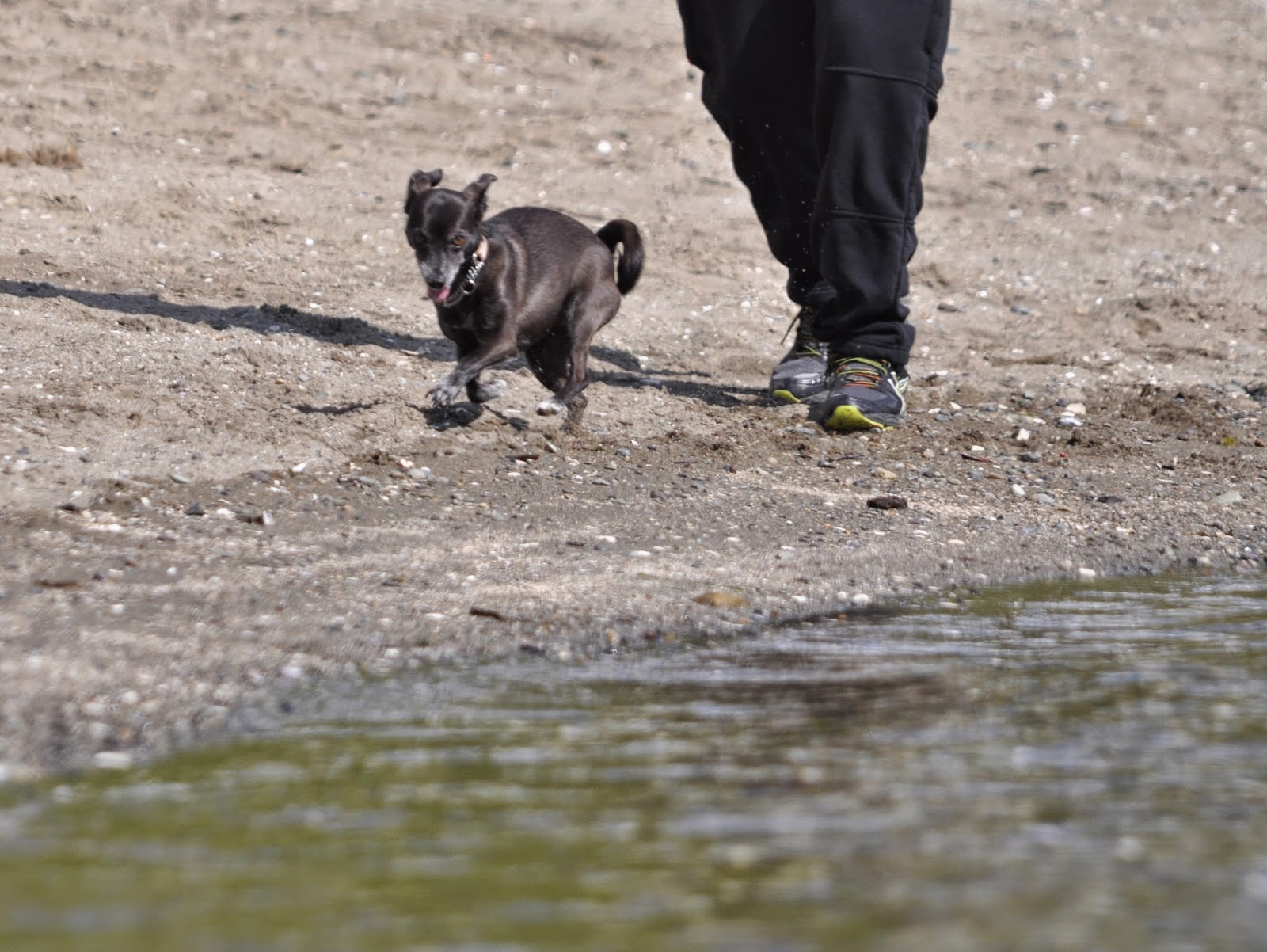 She was still licking her chops when she finally got back in the game. 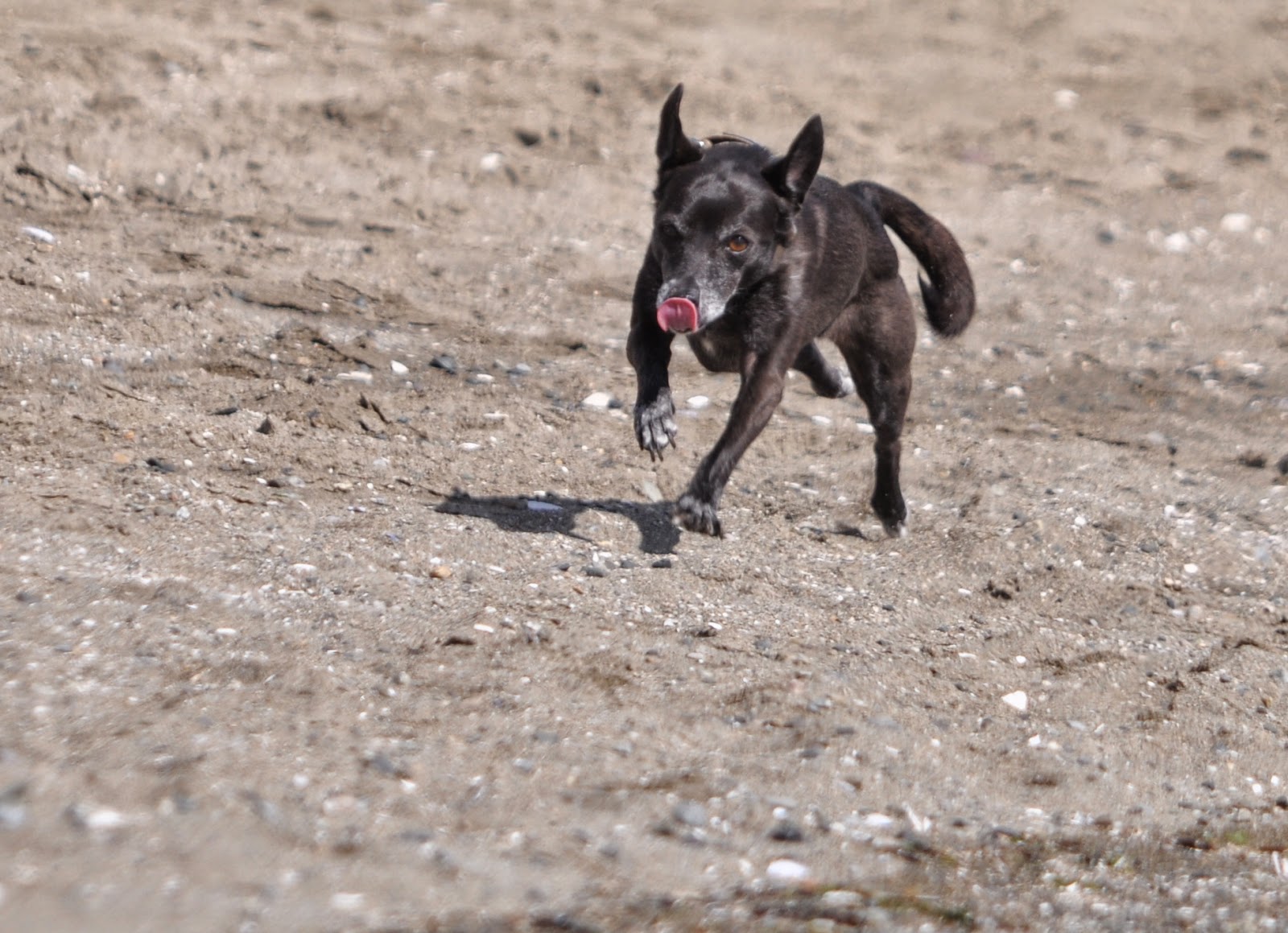 Right back in it again, here, but my shot was fuzzy so I played with "vignette" on iphoto.  I do love when I can catch all four of her feet off the ground. 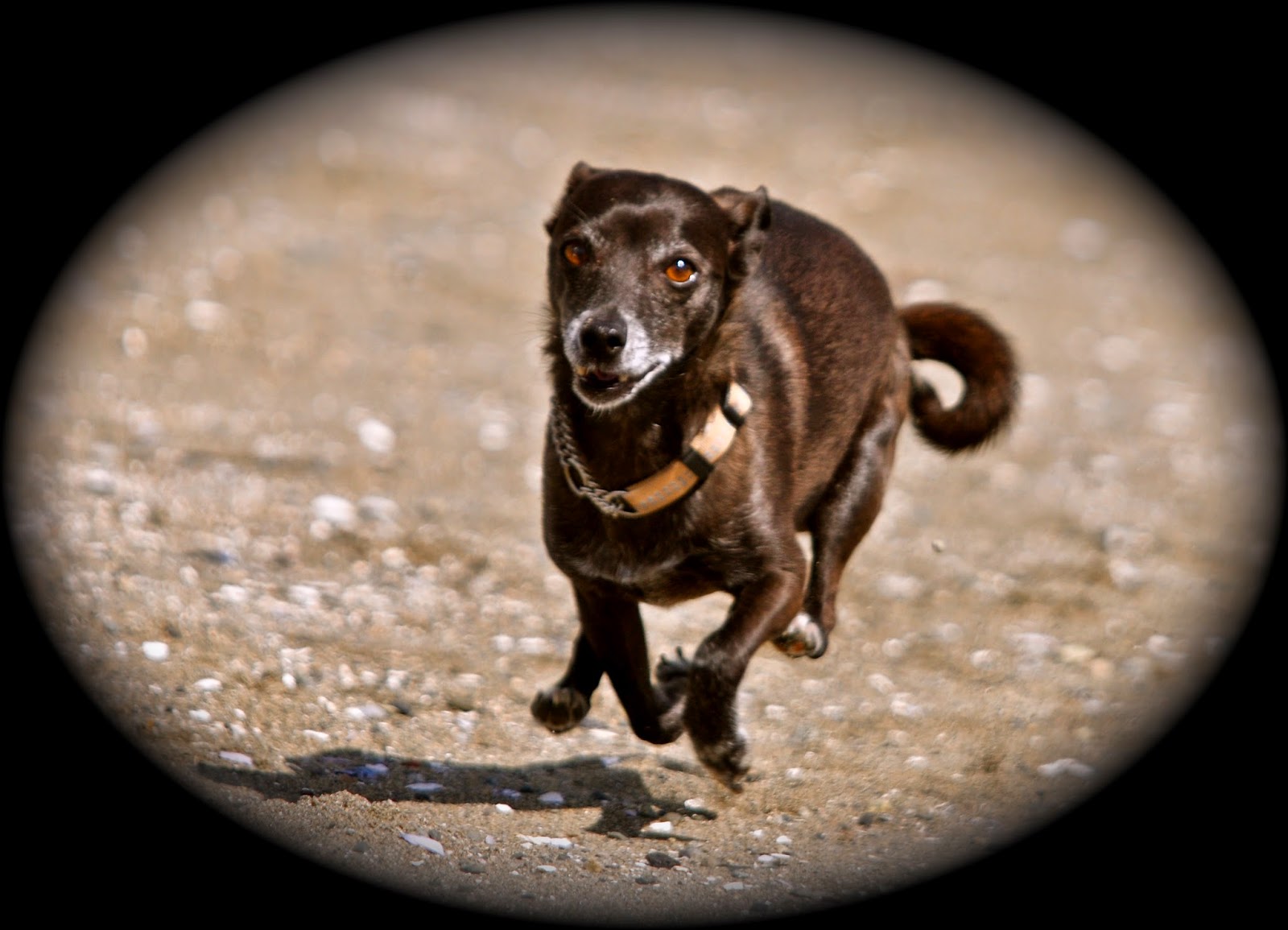 When Black Jack headed back to Bill, I used those moments to try to capture the Pelagics.  They were gathered together, perhaps having a family conference. 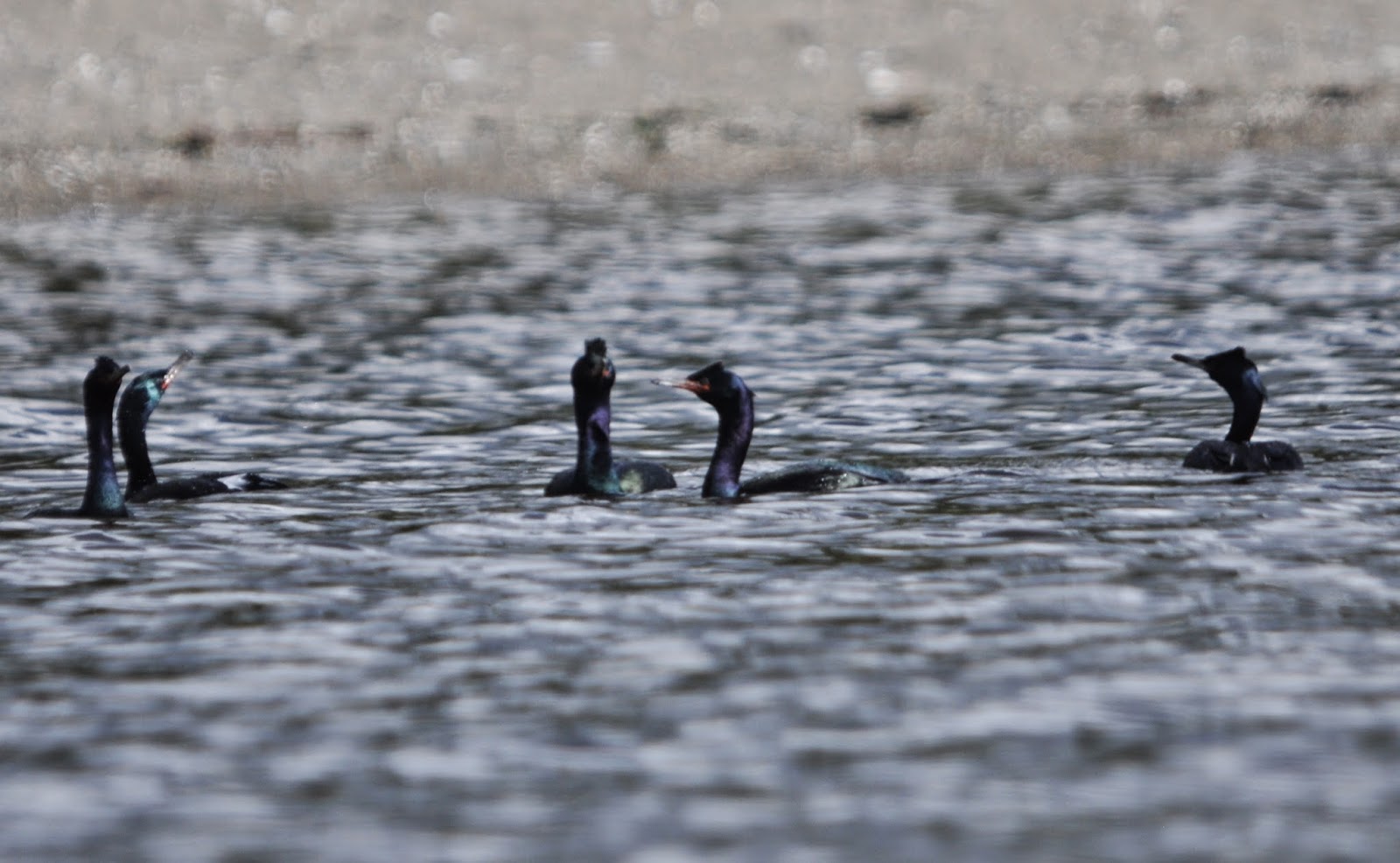 Black Jack on her way back, with ears all wiggly and cute (to me). 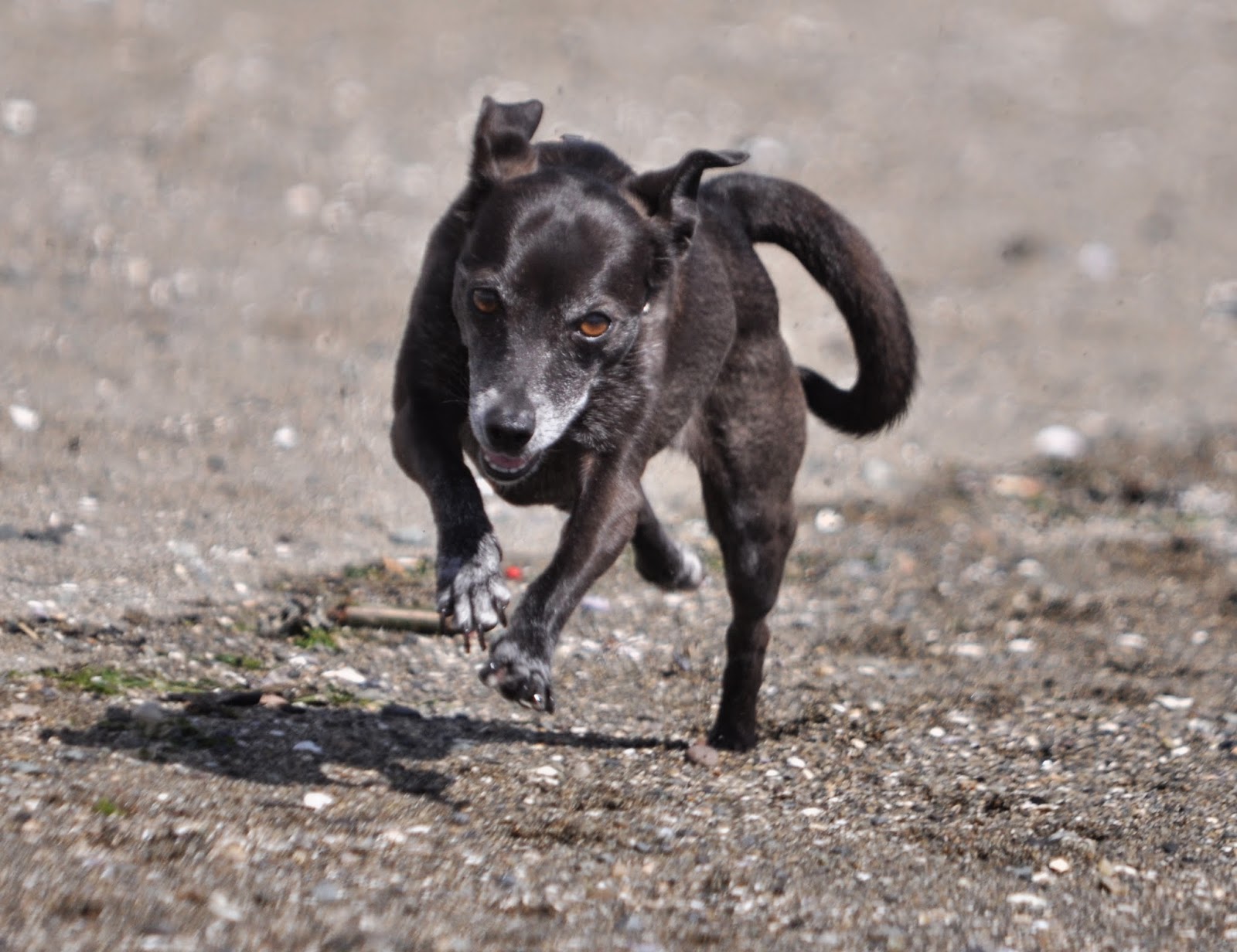 This Pelagic took a bath. 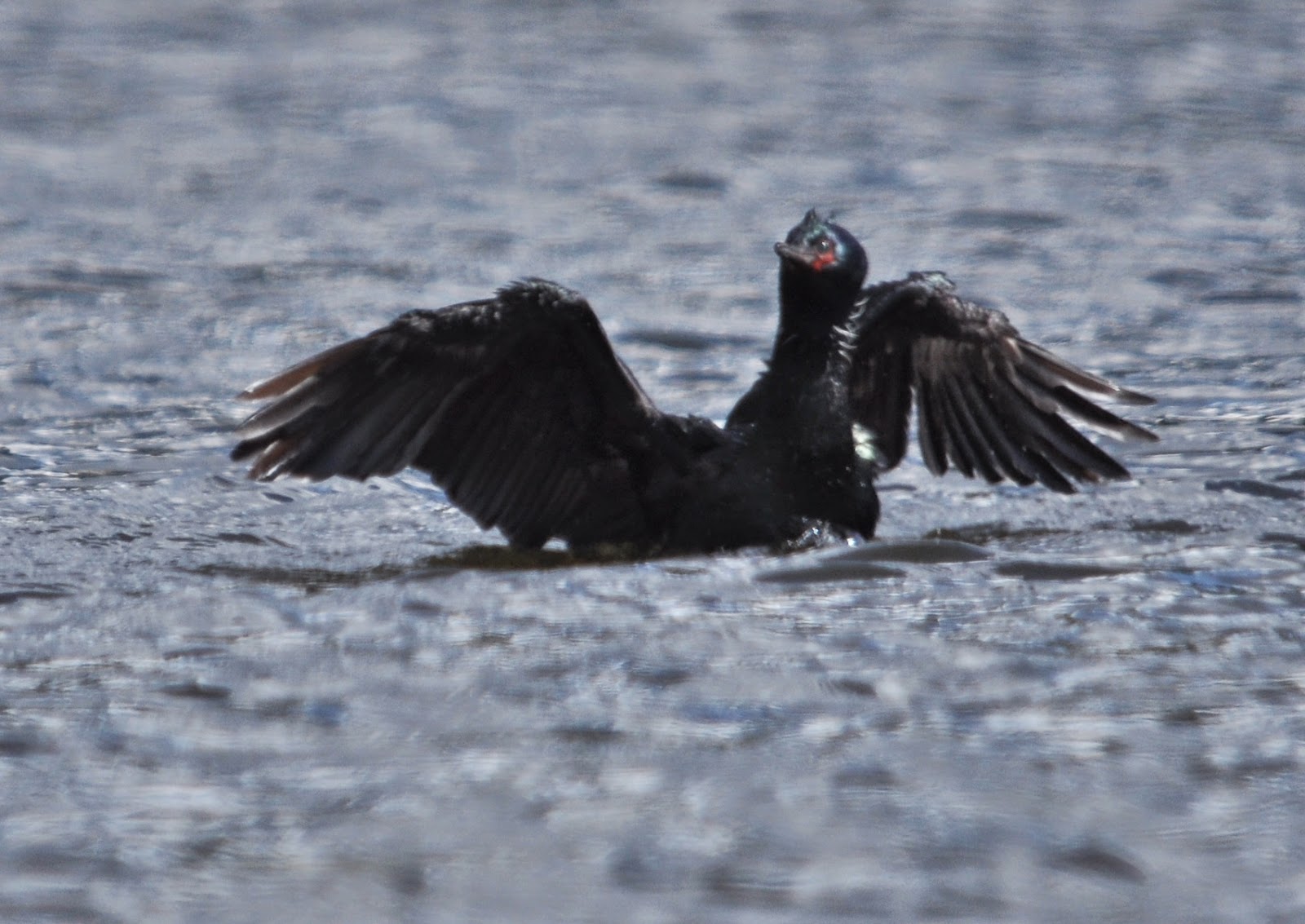 These three watched but didn't join in. 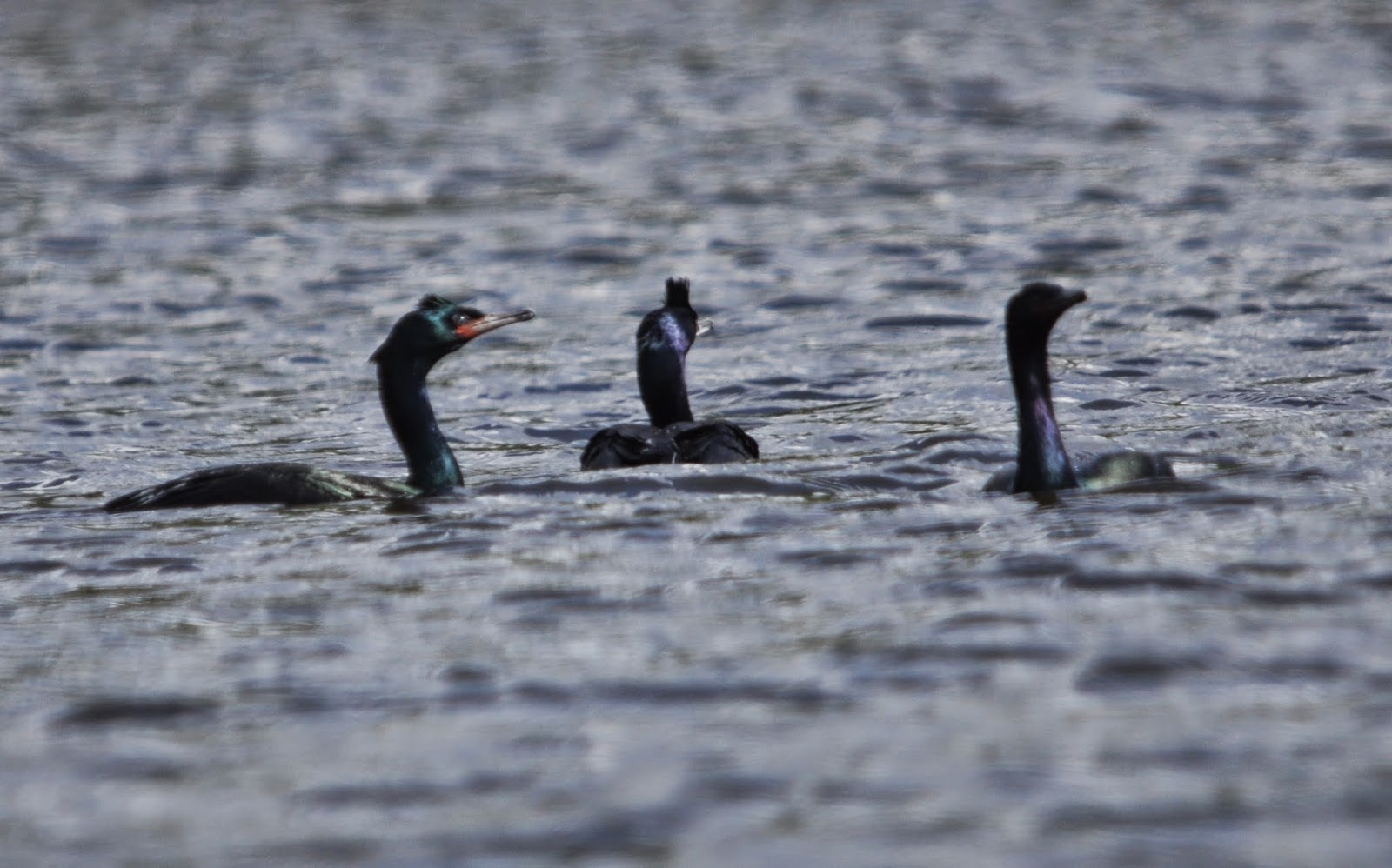 Every one of the pelagics flew off.  I tried to get a flight shot but only managed one so-so image, with a little detail in the wings but none in the head. 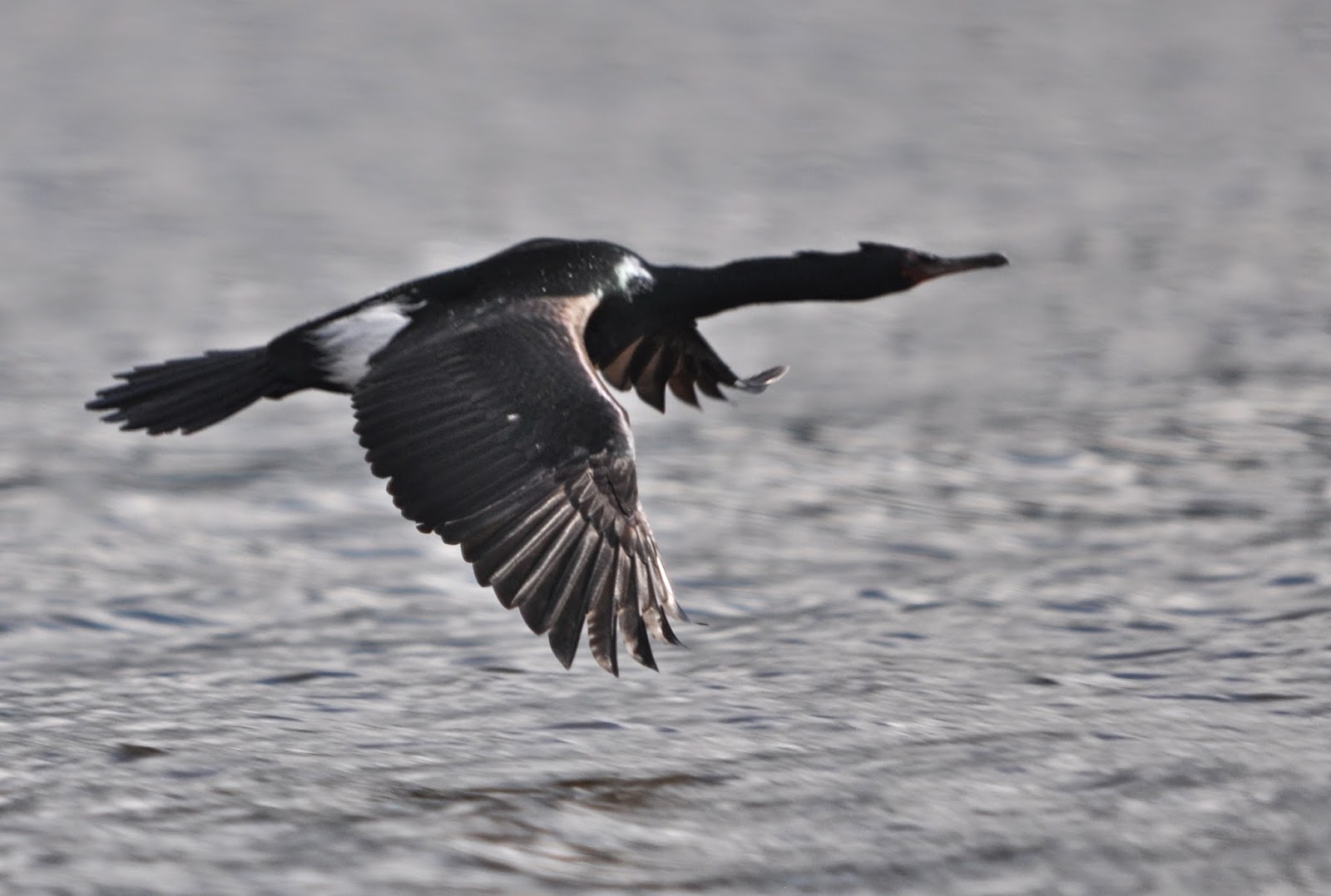 A couple of double-crested came by and I caught this one with his/her (unidentified) catch. 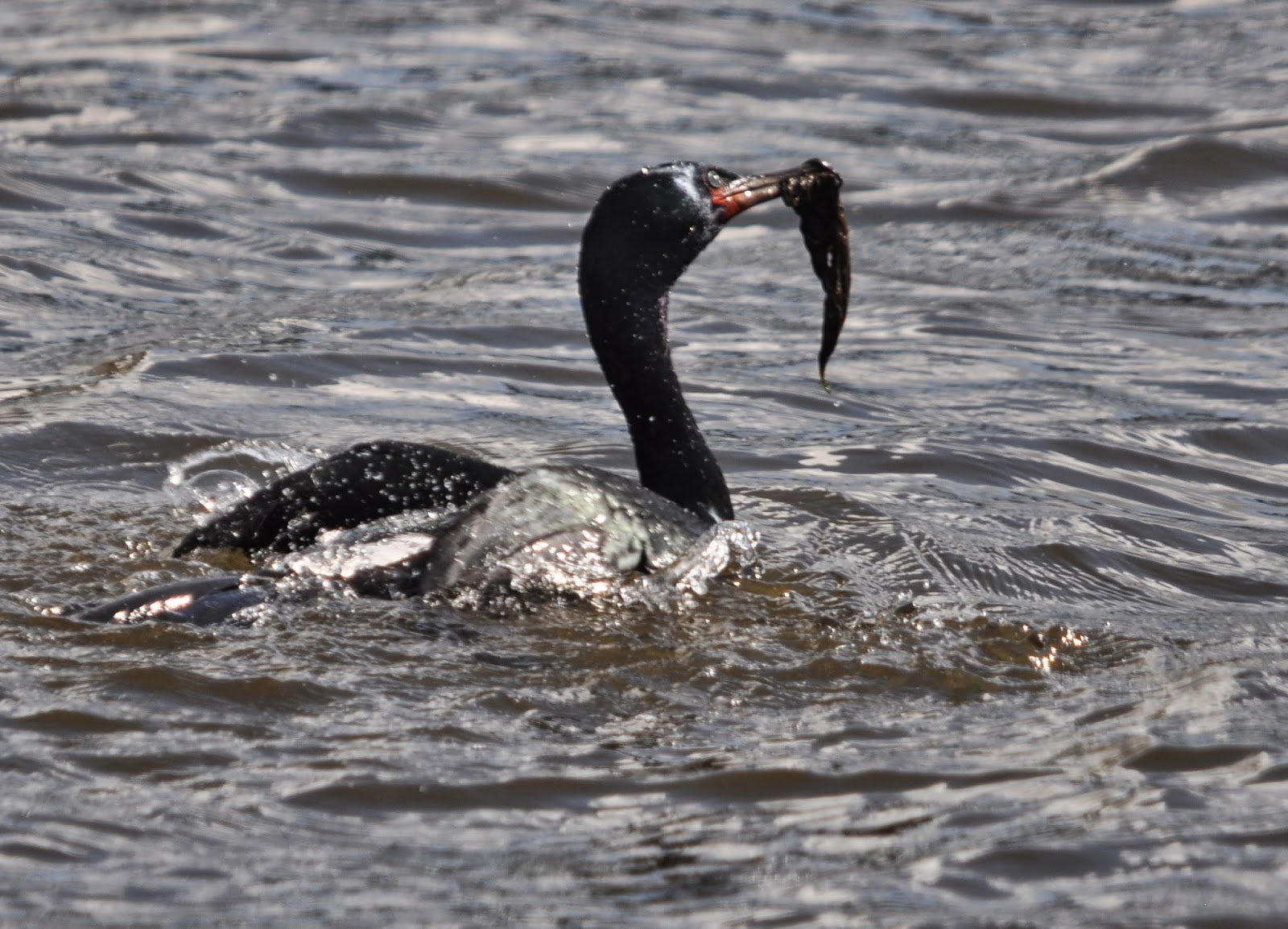 S/he flew off as well and then, there were none.  (Still missing detail in the head.) 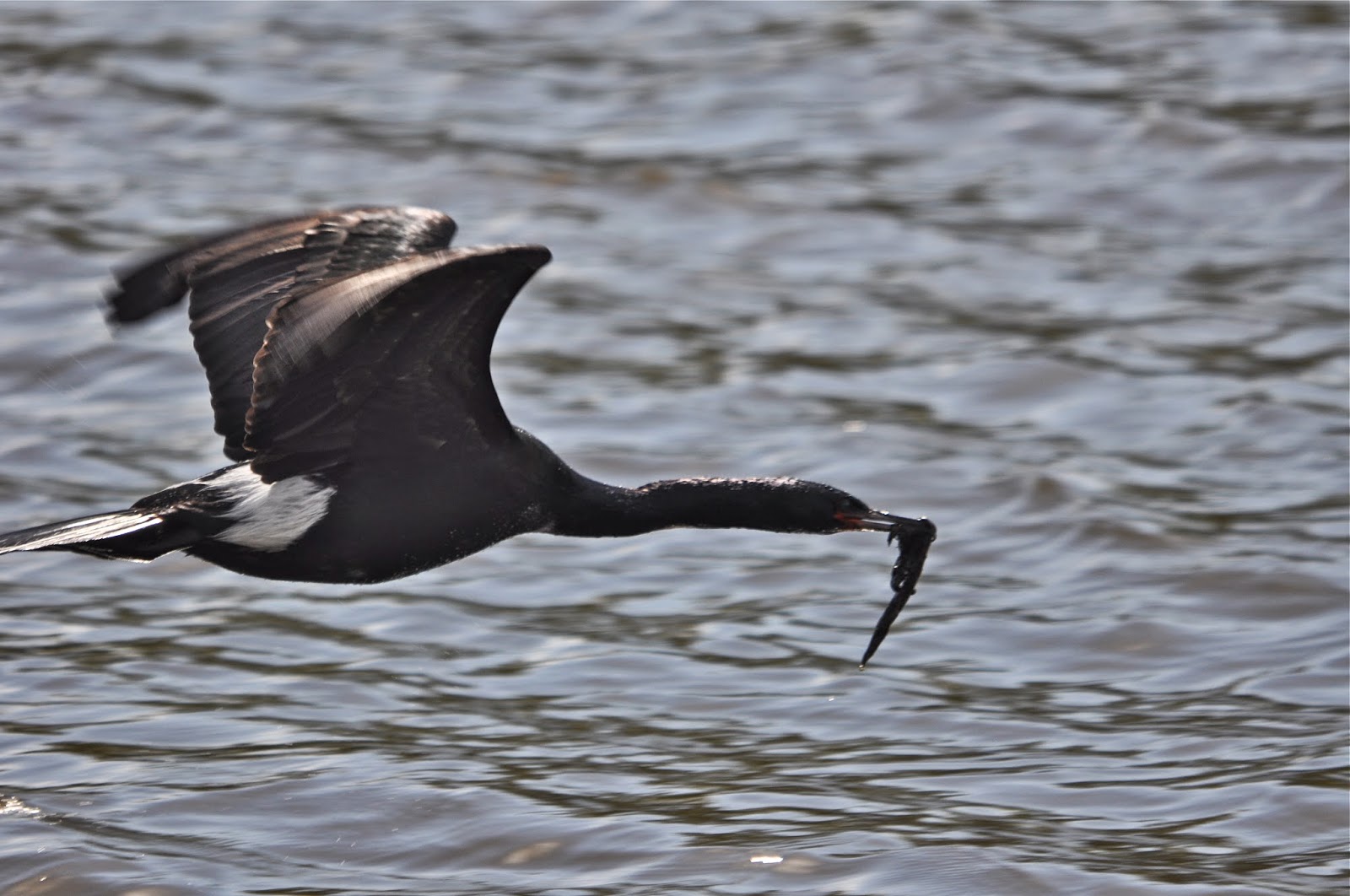 Bill, Black Jack and I got back on our bikes and continued on to Stanley Park.  This young robin was sitting on a log under a tree. 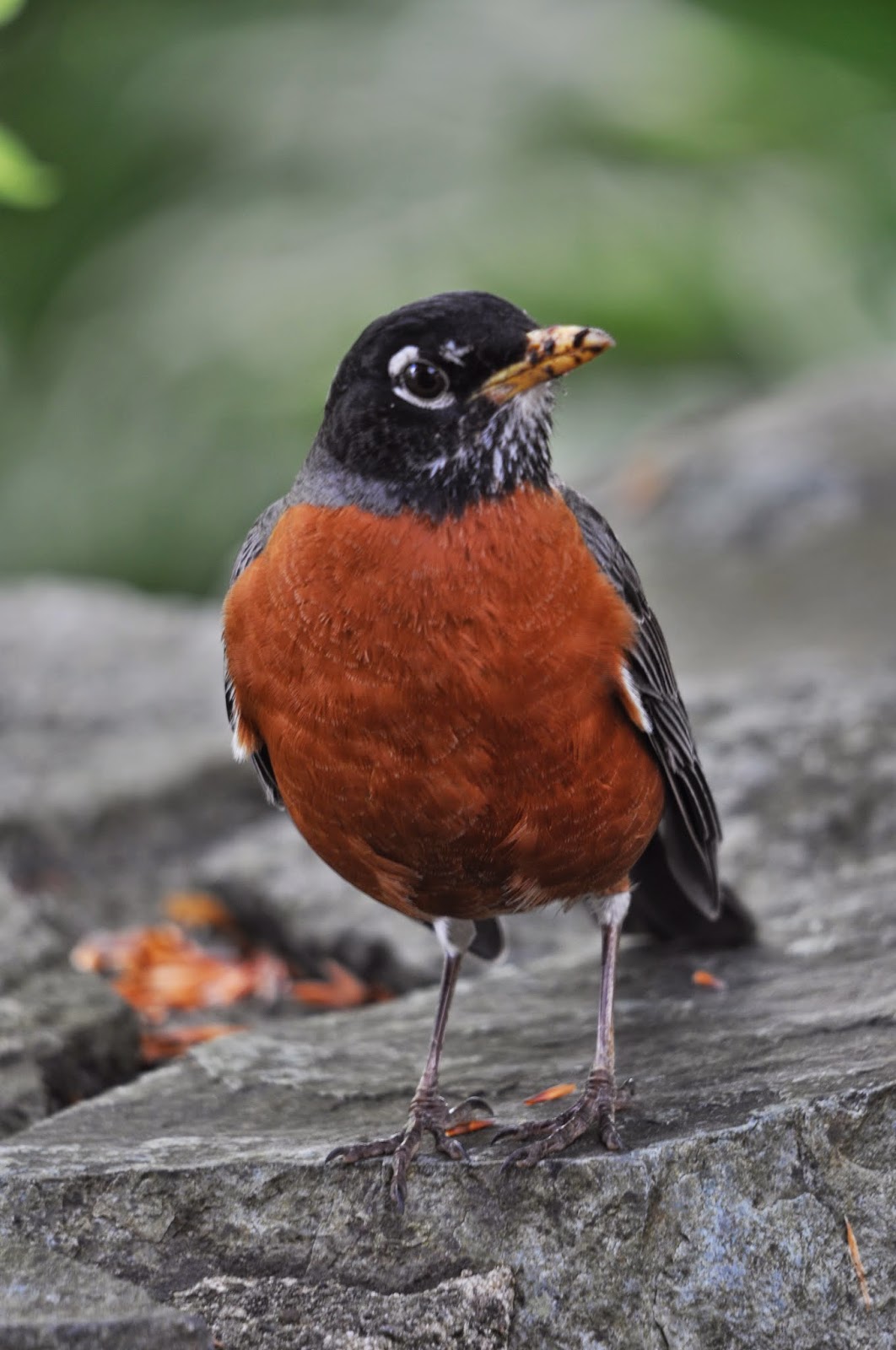 The heronry was a-buzz with the sound of chicks, but I couldn't manage to see any of the little ones.  I did see one eye peeking through the branches but I'm pretty sure s/he was an adult.  It is the 14th year that the herons have chosen this nesting site.  I hope to get back to spend more time with them soon, but in the mean time, you can read the updates at this site.  Here's one quote from the site: "The last count from the ground (end of April) showed that of 119 total nests in the colony, 90 were occupied by 117 adult herons. These numbers are roughly consistent with counts done at this time last year." 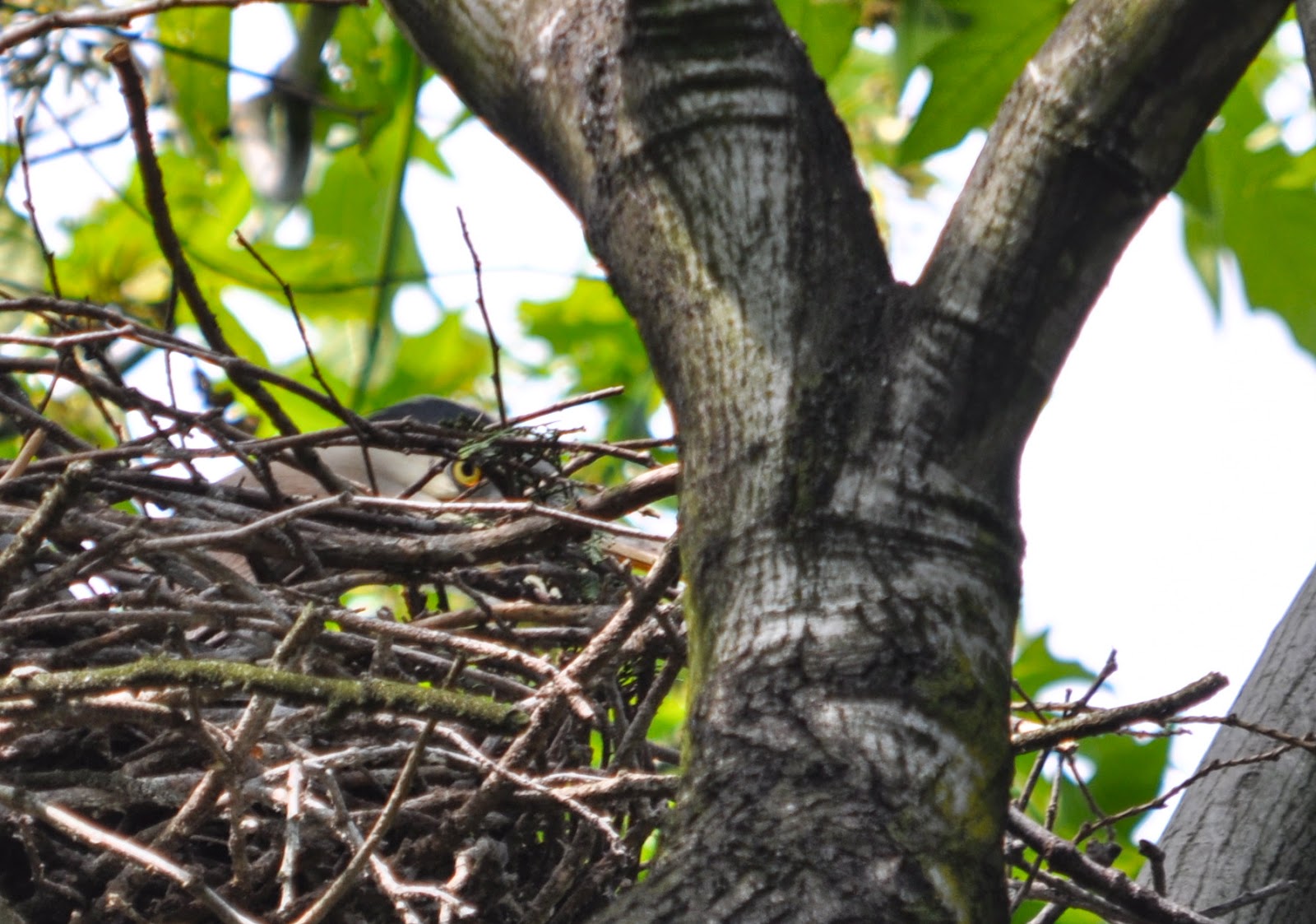 Not too many critters in these next few photos, unless you count the ones underwater, or the ones so tiny as to be invisible.  What you do get is Bill on his bike.  I continue to marvel that he has come through a difficult year health-wise with such courage and progress.  Seeing him like this just plain does my heart good and it has to be recorded. 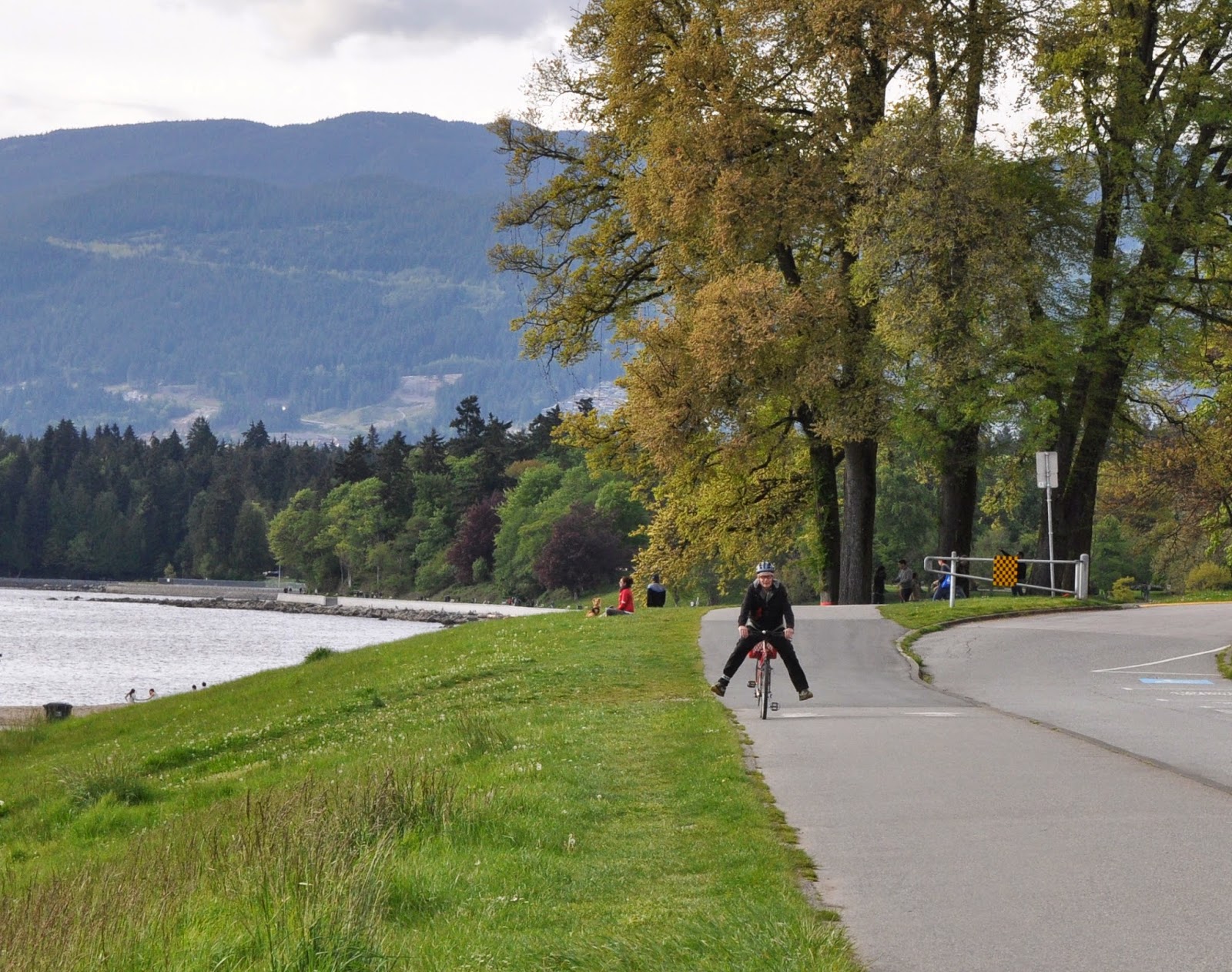 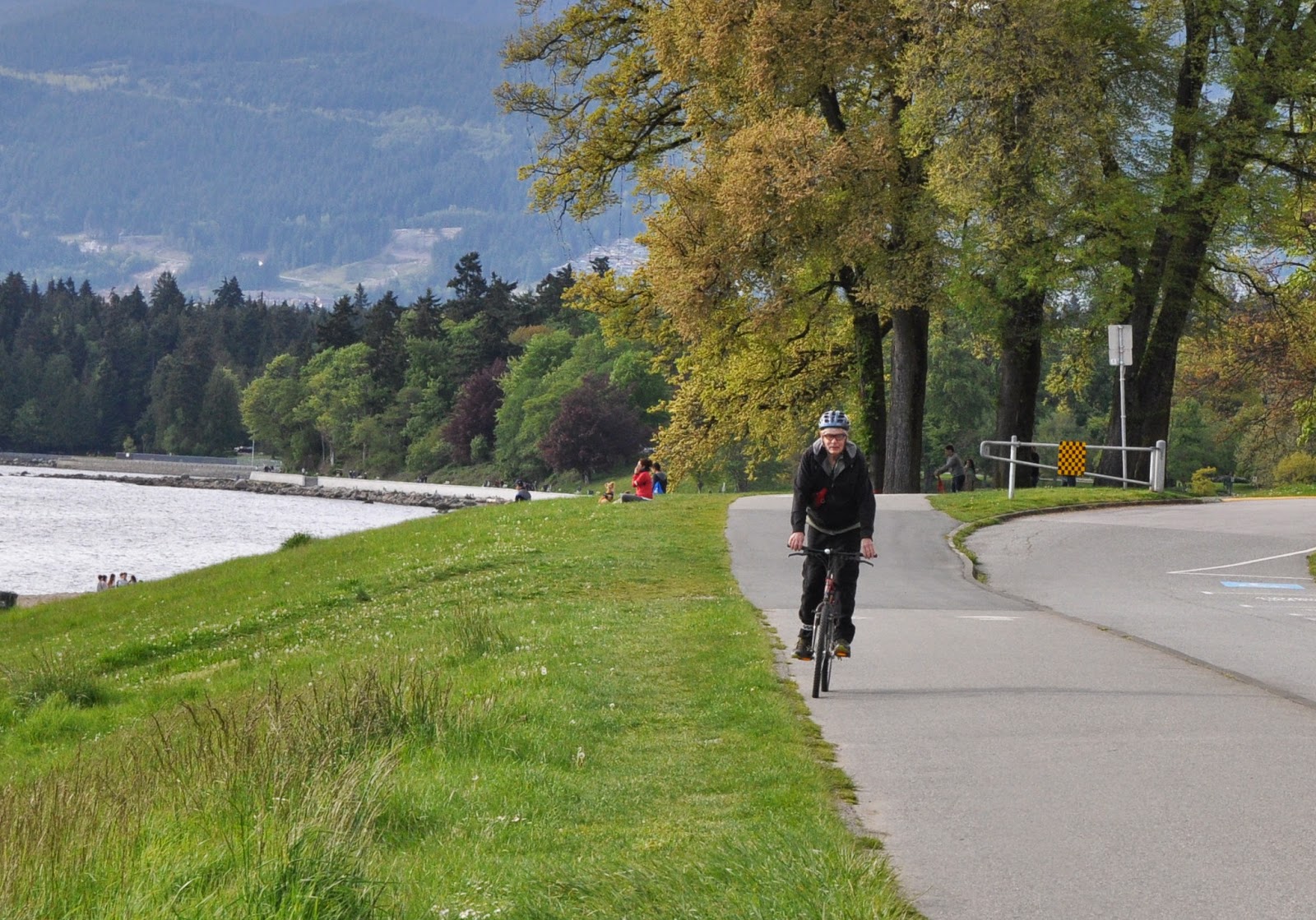 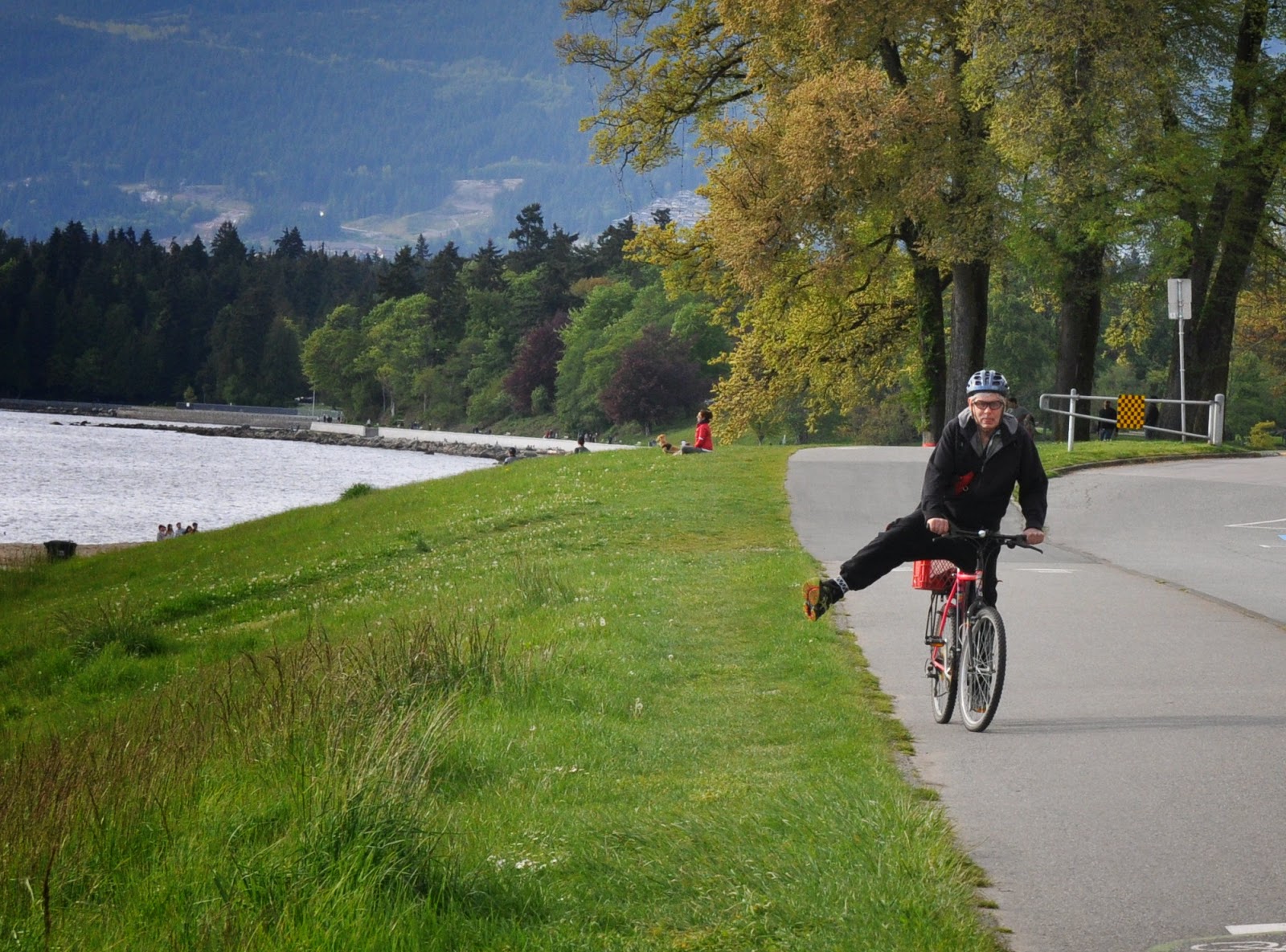 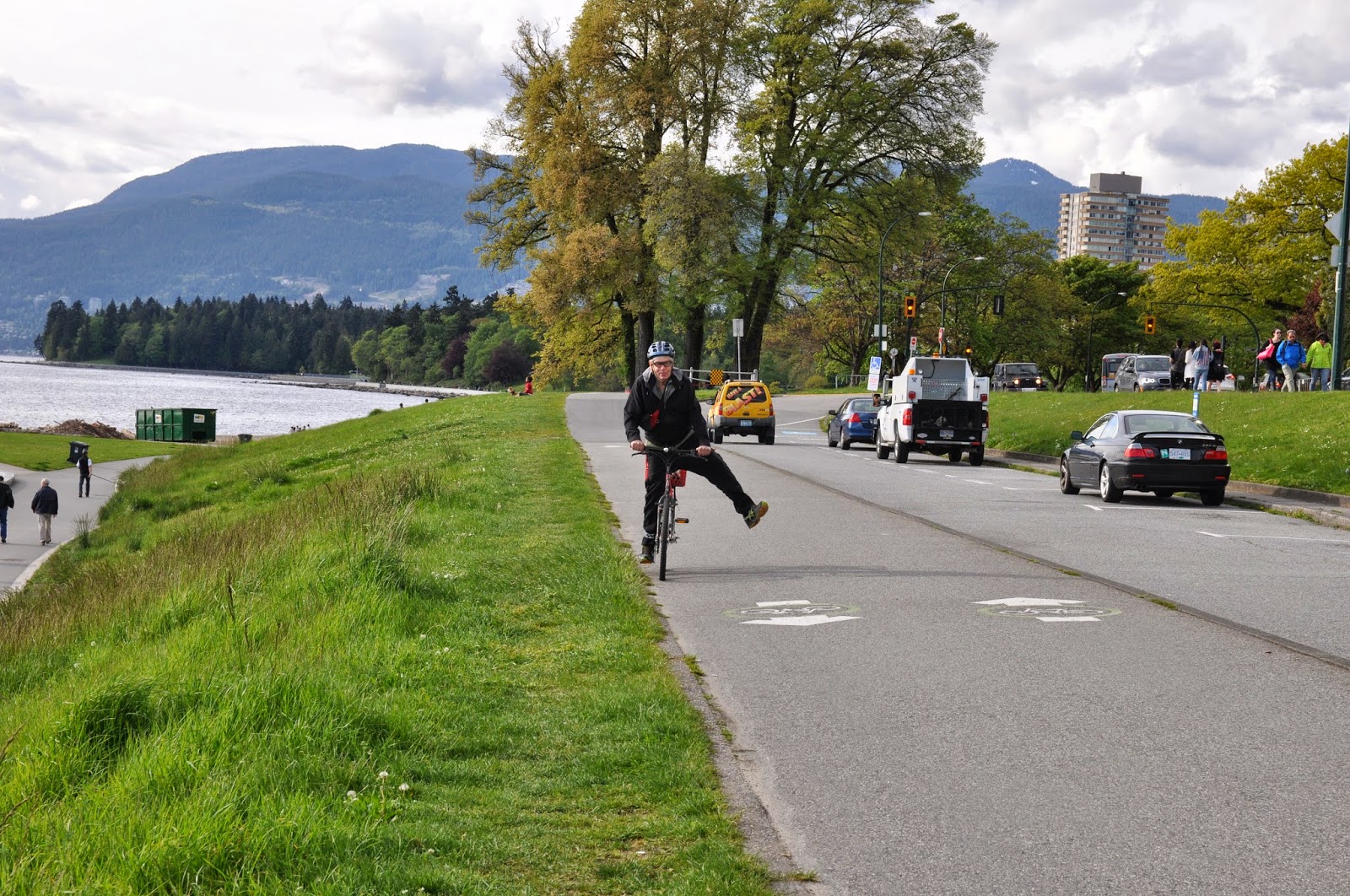 Smile for the Camera 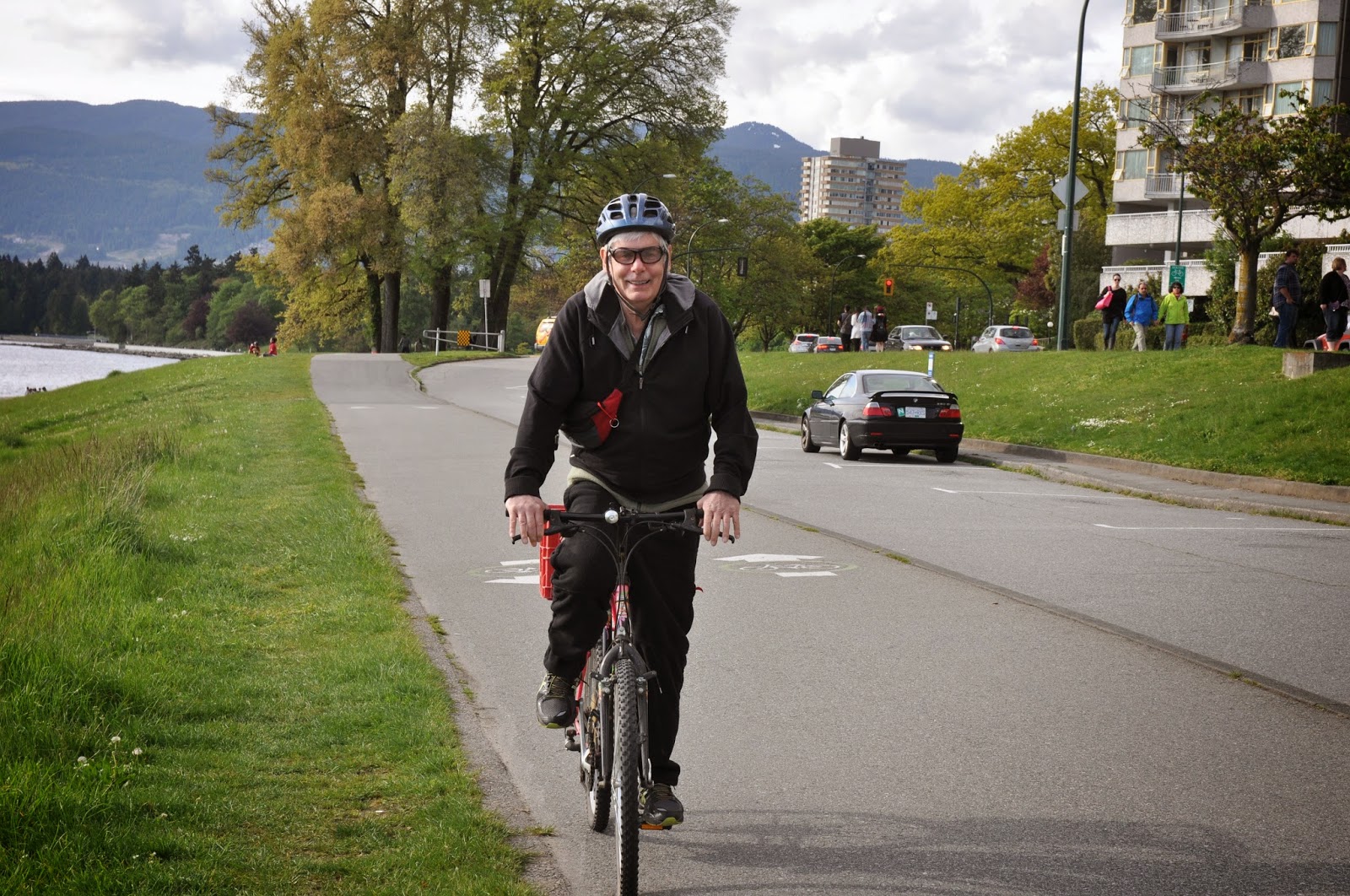 And there I come, with Black Jack in her basket.  How lucky are we to have this beautiful bike path, English Bay to our right, and our favourite man taking our photo! 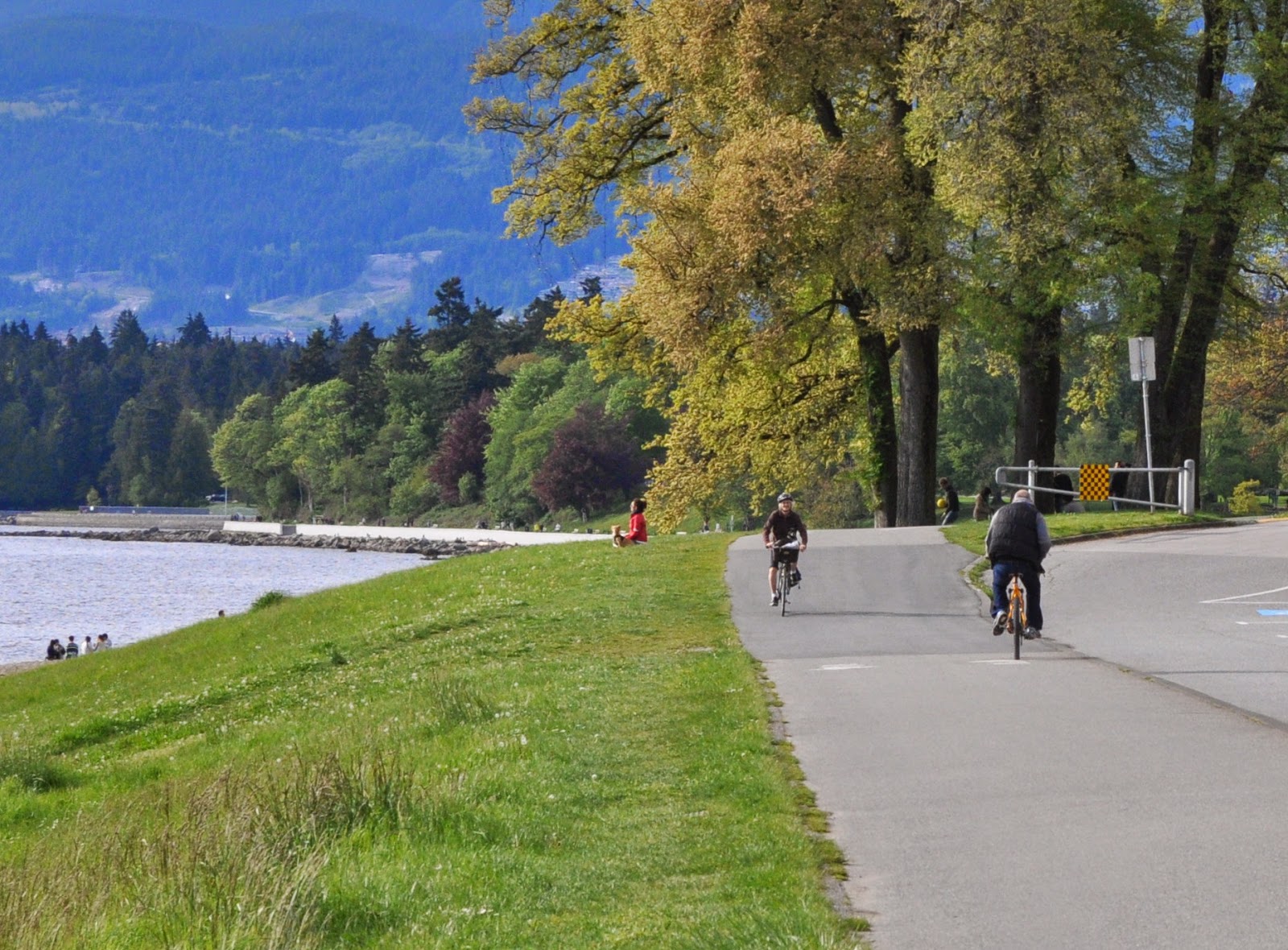 No wonder I'm smiling too.  Black Jack is watching Bill, wondering what her chances are of scoring another treat.  She likes her basket so much, she goes sort of limp when I try to lift her out of it.  She is the most relaxed little dog I have ever known.  It suits her just fine to have a soft spot where she can snuggle in to feel the wind in her face and watch the world go by. 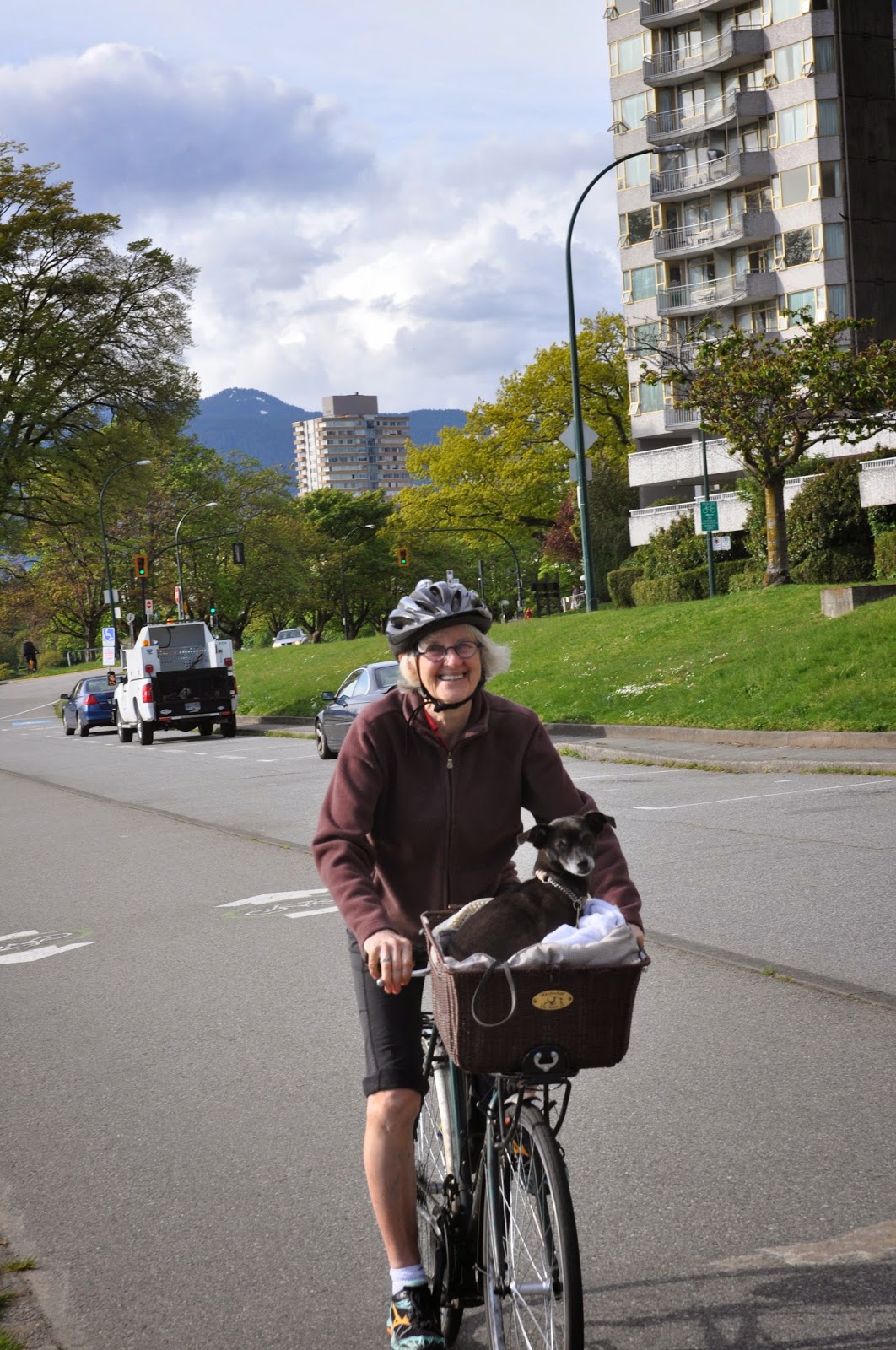 This is the view as we head homeward. 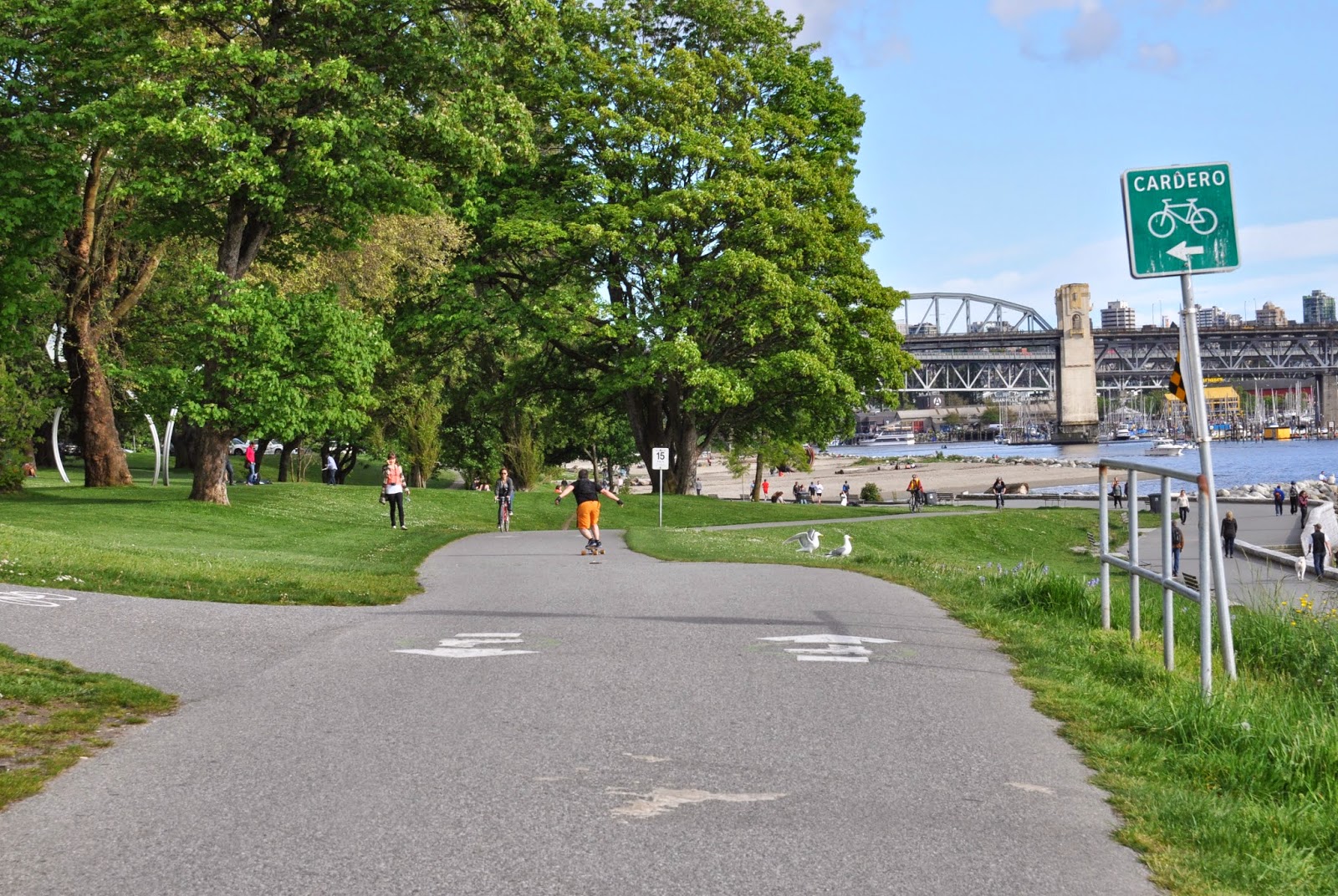 One last shot from the ground, taken after we arrive home.  Thanks for stopping by everyone.  Don't forget to check out Camera Critters and Saturday's Critters.  Have a wonderful weekend! 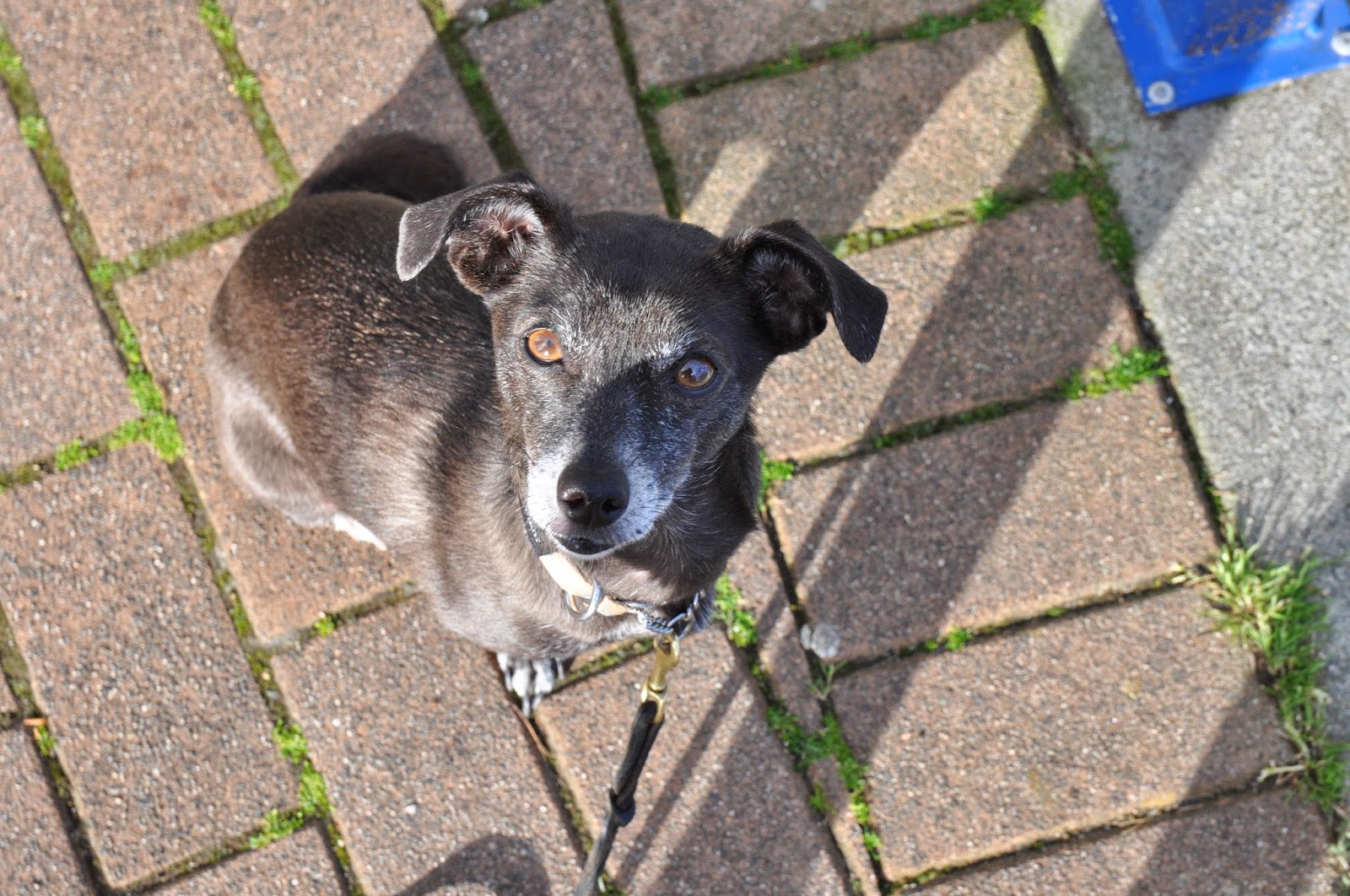