This week, ABC Wednesday features the letter Q.  I used a site listing unusual words that begin with Q to help me learn a few new words.  Just in case they are also new for you, here are the words with their meanings:
1. quantulate (calculate the magnitude of)
2. quaesitum (true value)
3. quagswag (shake to and fro)
4. quackle (suffocate)

Tuesday evening, I asked Bill for some q-word suggestions.  We had just attended a LInk Dance performance at The Roundhouse.  A wide span of age, culture, body type and dance experience within the community had been represented and I was quivering with  happy warmth as we walked the few steps back to our apartment.  "Quality" was his first utterance.
My Q words?  Well, I was thinking of Emily Carr.  Bill and I have been reading her "Hundreds and Thousands" together.  It's just about impossible to quantulate the quaesitum of her words and art on my life, but the two adjectives that popped into my head (querulous and quirky) were rather unflattering.  Emily was the queen of honesty and she would have been the first to describe herself as querulous, but I didn't want a negative connotation to be the focus of a post about an artist who means so much to me.  And, Quirky?  On second thought, that one could work.  Perhaps, that is just another word for creativity or originality or independent thinking.  Add Bill's word to it, and a theme is born.  Quality Quirks links up nicely to some of Emily's quotes as well as to the other happenings in our day yesterday.
I've photographed the cover and title page of my copy of "Hundreds and Thousands" for you, as well as a portion of page 232.  Emily quagswags my emotions along with hers.  I am constantly underlining quotes that make me laugh, or feel sad, or think about something in a new way, or ask a question, or celebrate a fresh description of a familiar feeling. 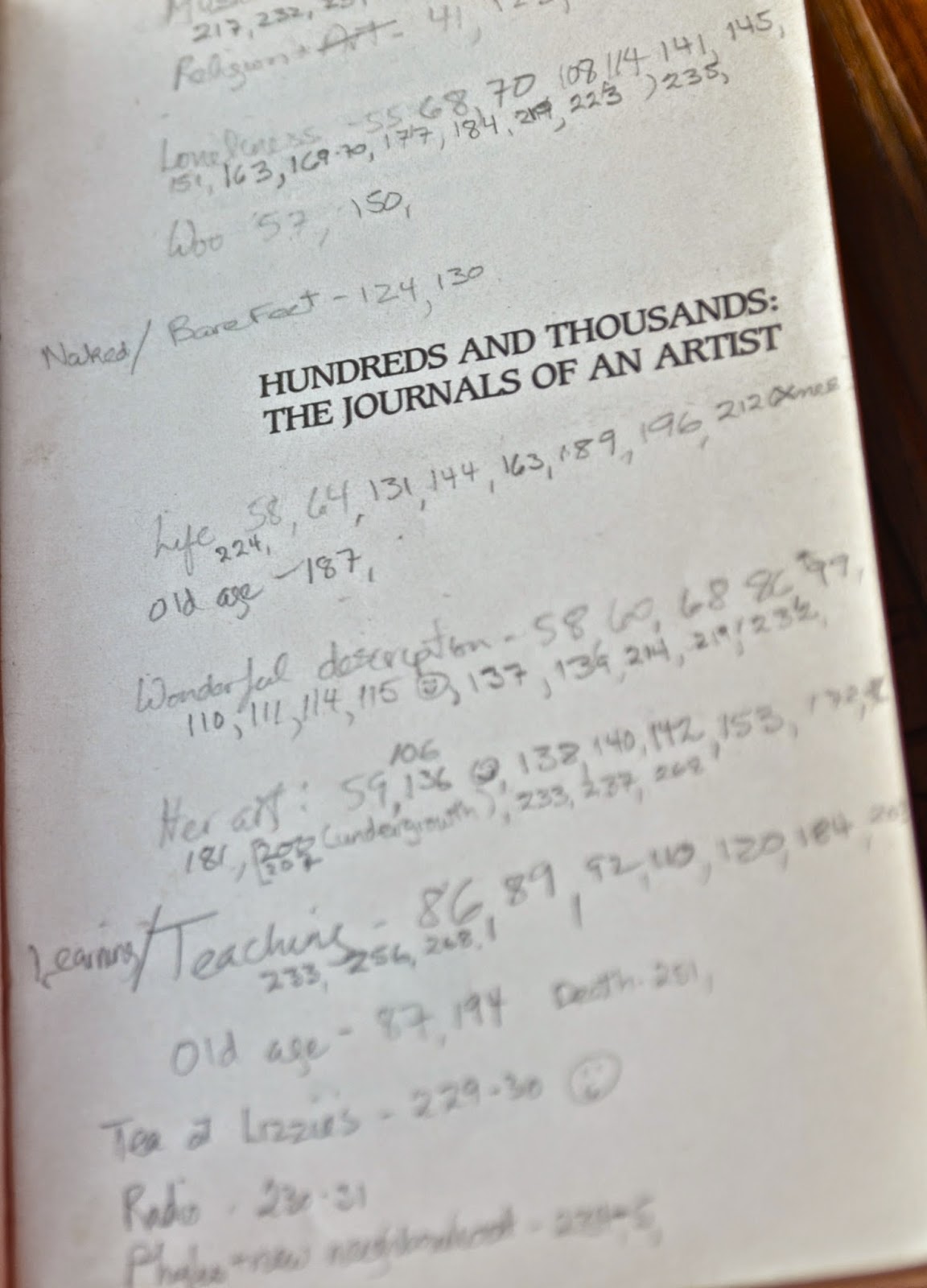 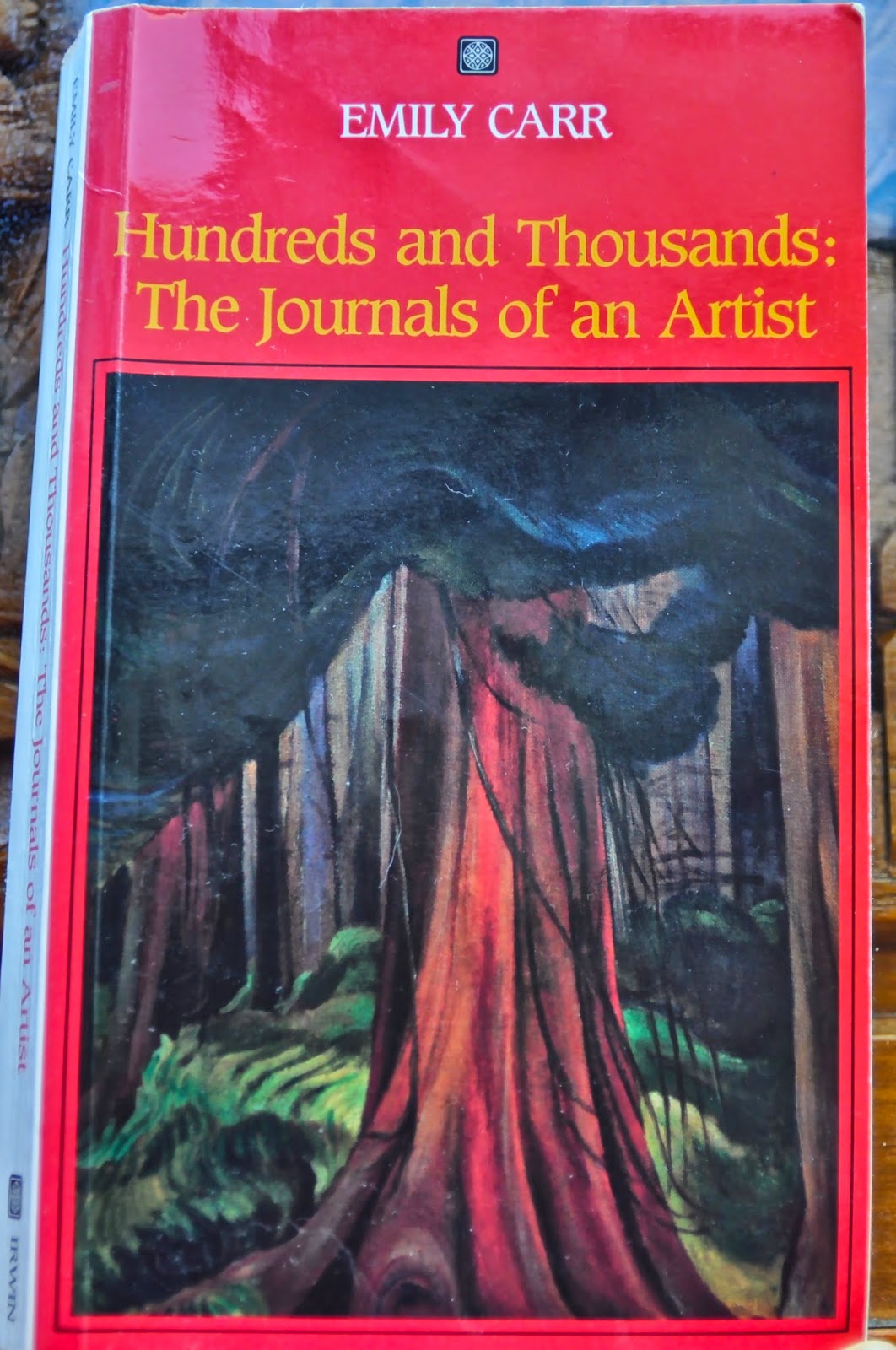 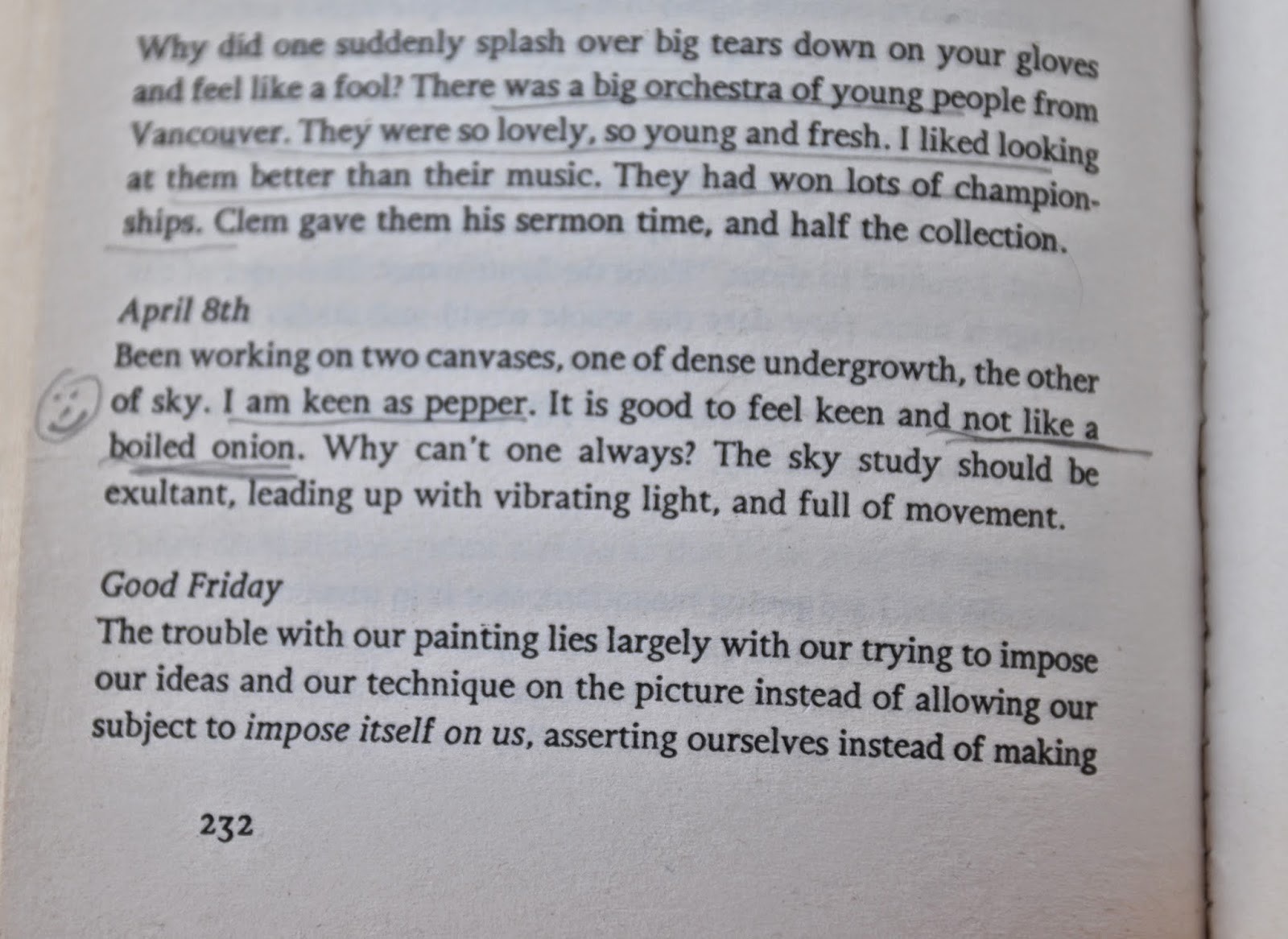 I wonder what Emily would have thought of Yue Minjun's A-maze-ing Laughter sculptures in Morton Park along Vancouver's English Bay.  We rode our bikes there yesterday and I'm pretty sure that, whether she liked the art or not, she would have laughed at Bill mimicking a pose from the rear (so to speak :) 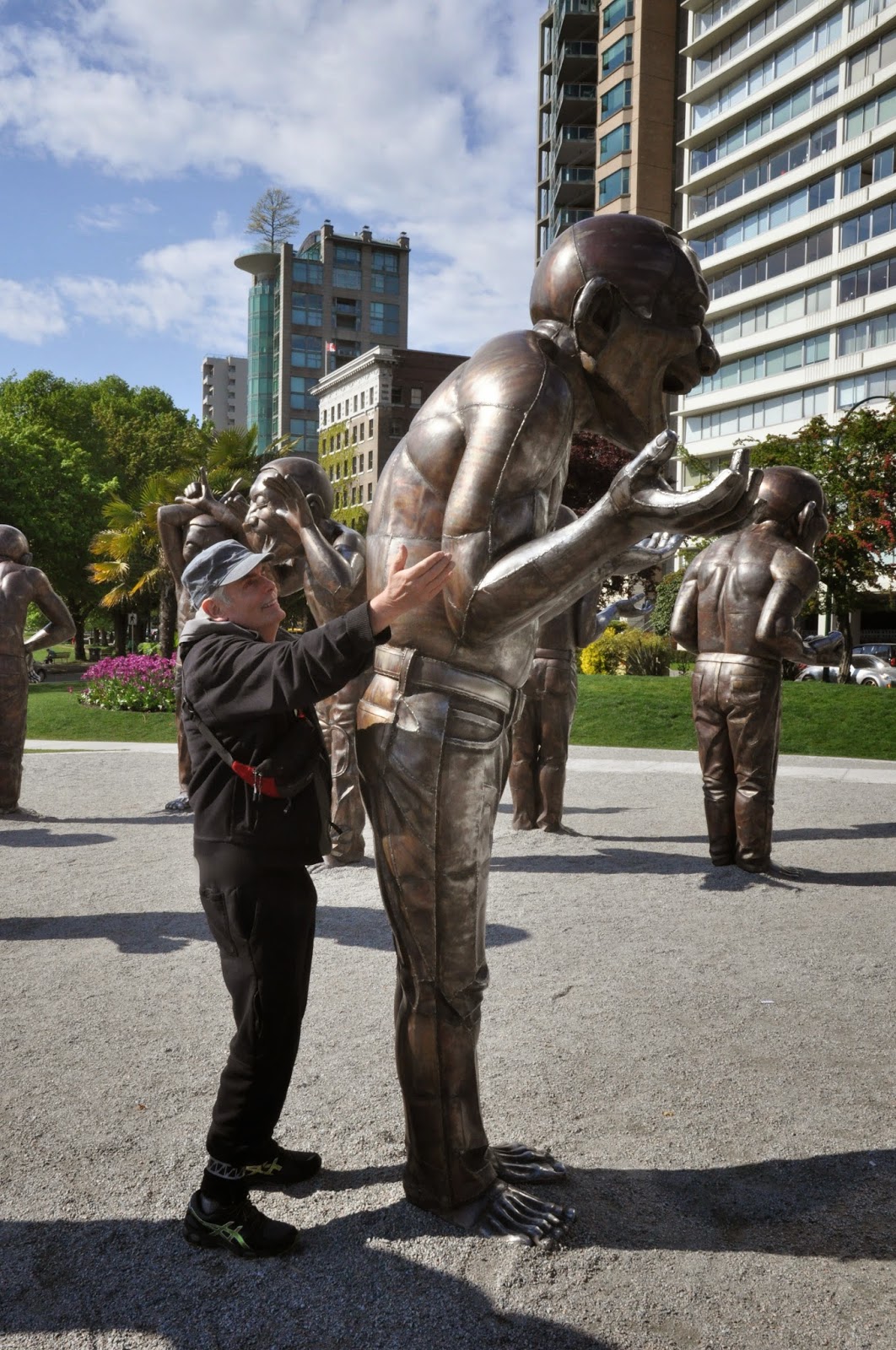 As passionately as Emily strove to expand her understanding of the artistic process, she also had little patience with those who became too serious about "book-learnt" theories.  Of one supposed expert, Emily said, "Oh, what a dull woman.  It was like trying to make merry with a stone crusher." She appreciated a sense of humour.  When one of her stories was read aloud in a writing class that she took with classmates much younger than she, she was amused to hear her words coming out of another's mouth.  She said, "I struck a humorous note and the young things clapped and grinned at times and it helped to start them off with more courage.  Some of them were very good but most were frightfully serious.  They haven't grown high enough yet to see over the top of life's fence and note the funny things on the other side." Bill kept my laughter-quota topped up yesterday as we walked along.. 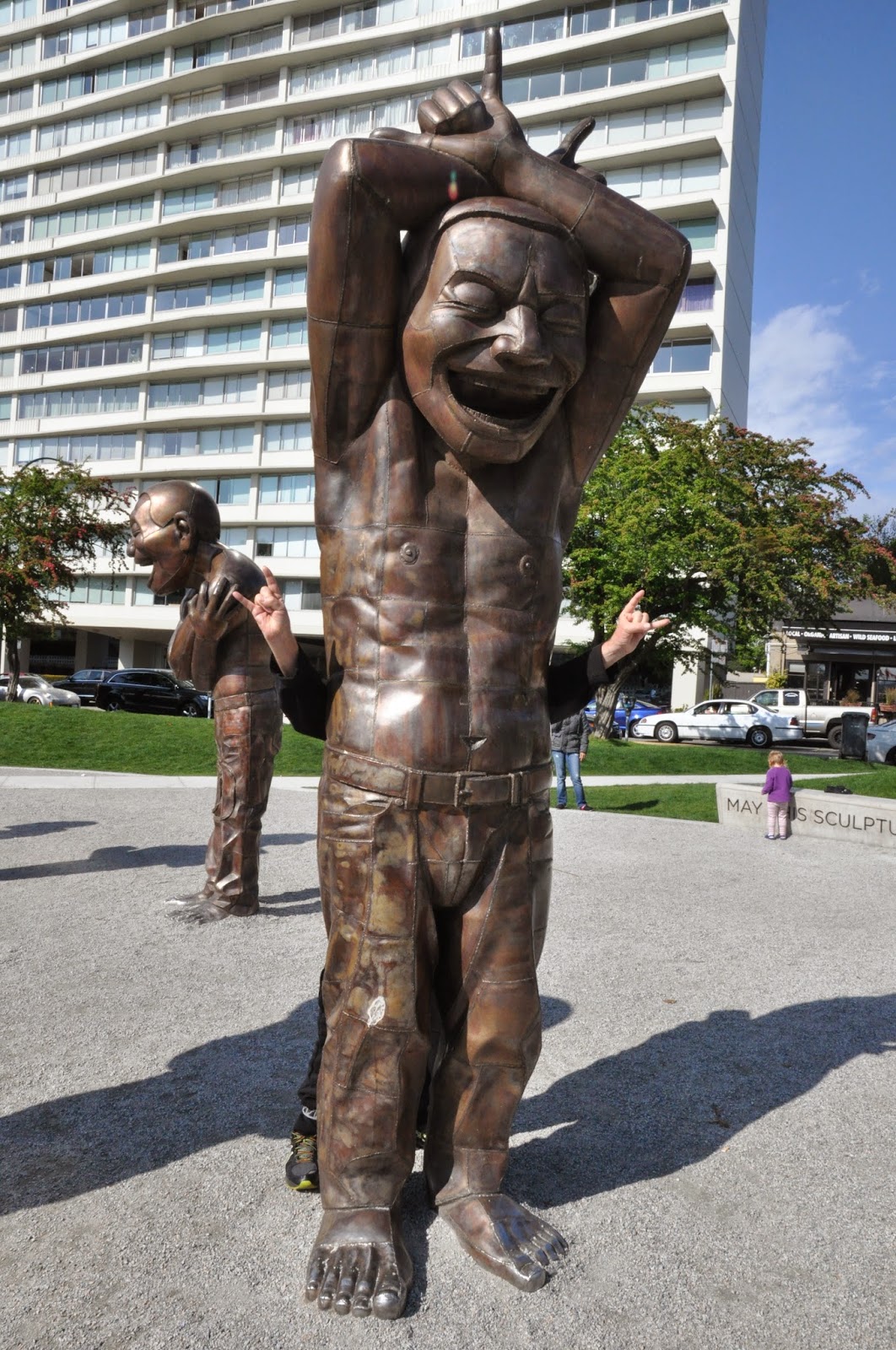 Denman Street with Black Jack.  These are along a fence at the corner of Nelson and were apparently put there so that people could record their wishes for all to see. 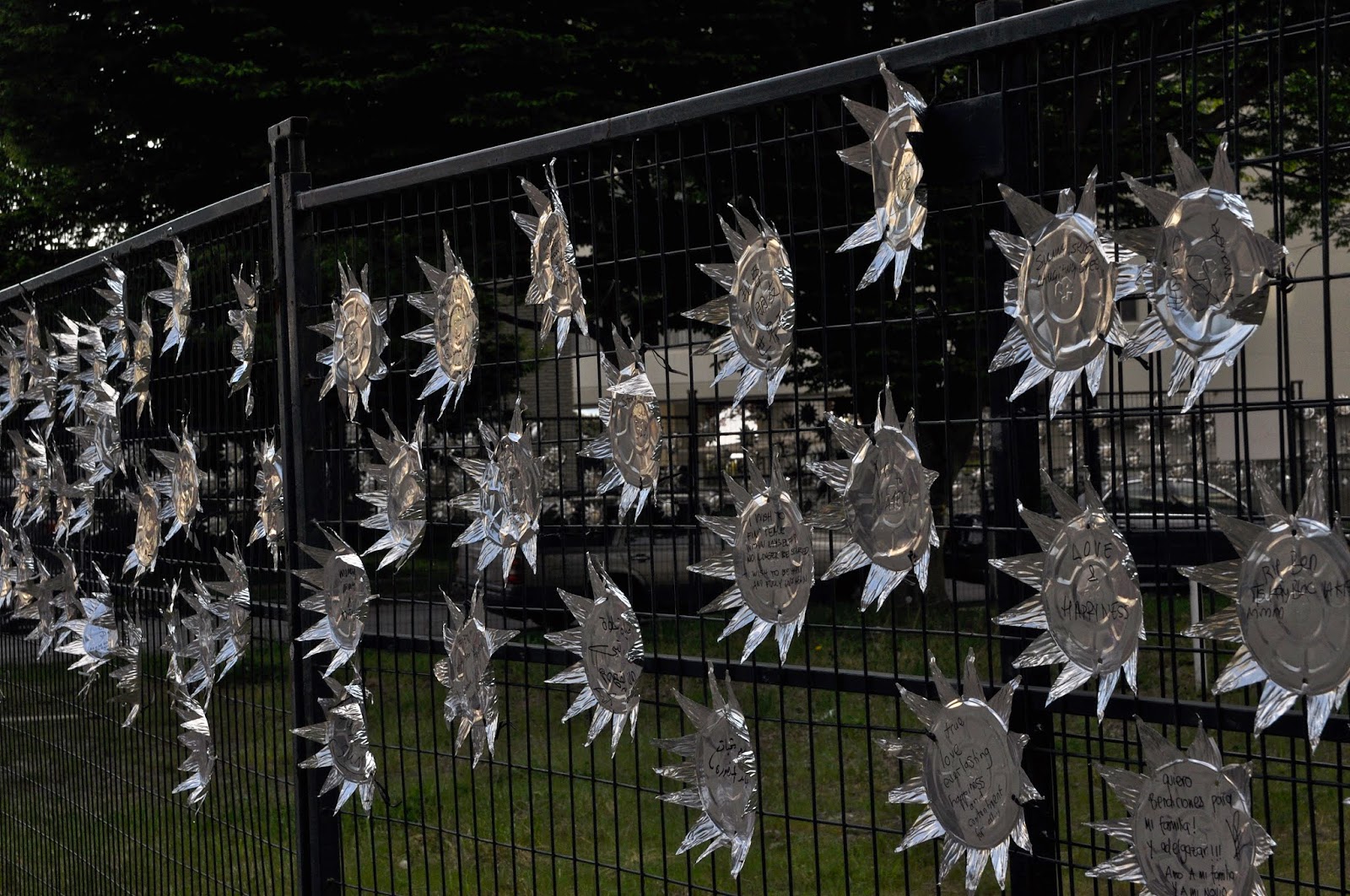 A few of the wishes were quite naughty, but most were heartfelt and family friendly.  I have no qualms about showing the one below. I don't know if Emily understood the implications of climate change or overfishing or any of the other threats to our planet, but I do know she loved and appreciated nature.  "Dear Mother Earth! I think I have always specially belonged to you.  I have loved from babyhood to roll upon you, to lie with my face pressed right down on to you in my sorrows.  I love the look of you and the smell of you and the feel of you." 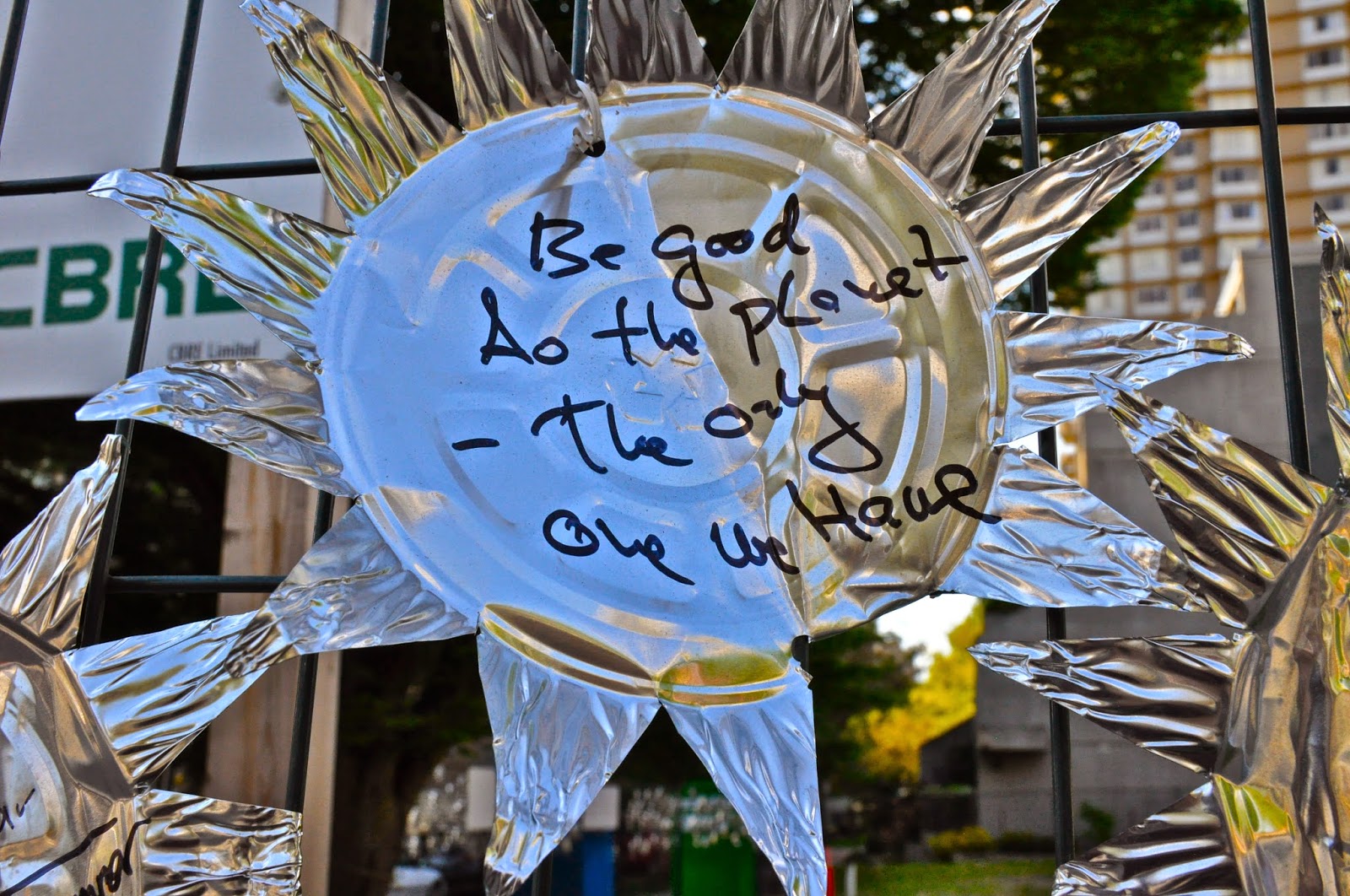 After lattes and treats, we returned to our bikes.  On the way, I admired the quilt of colour that blanketed the area in front of English Bay. We loaded Black Jack into her basket and headed home for a quick supper before attending the dance performance. 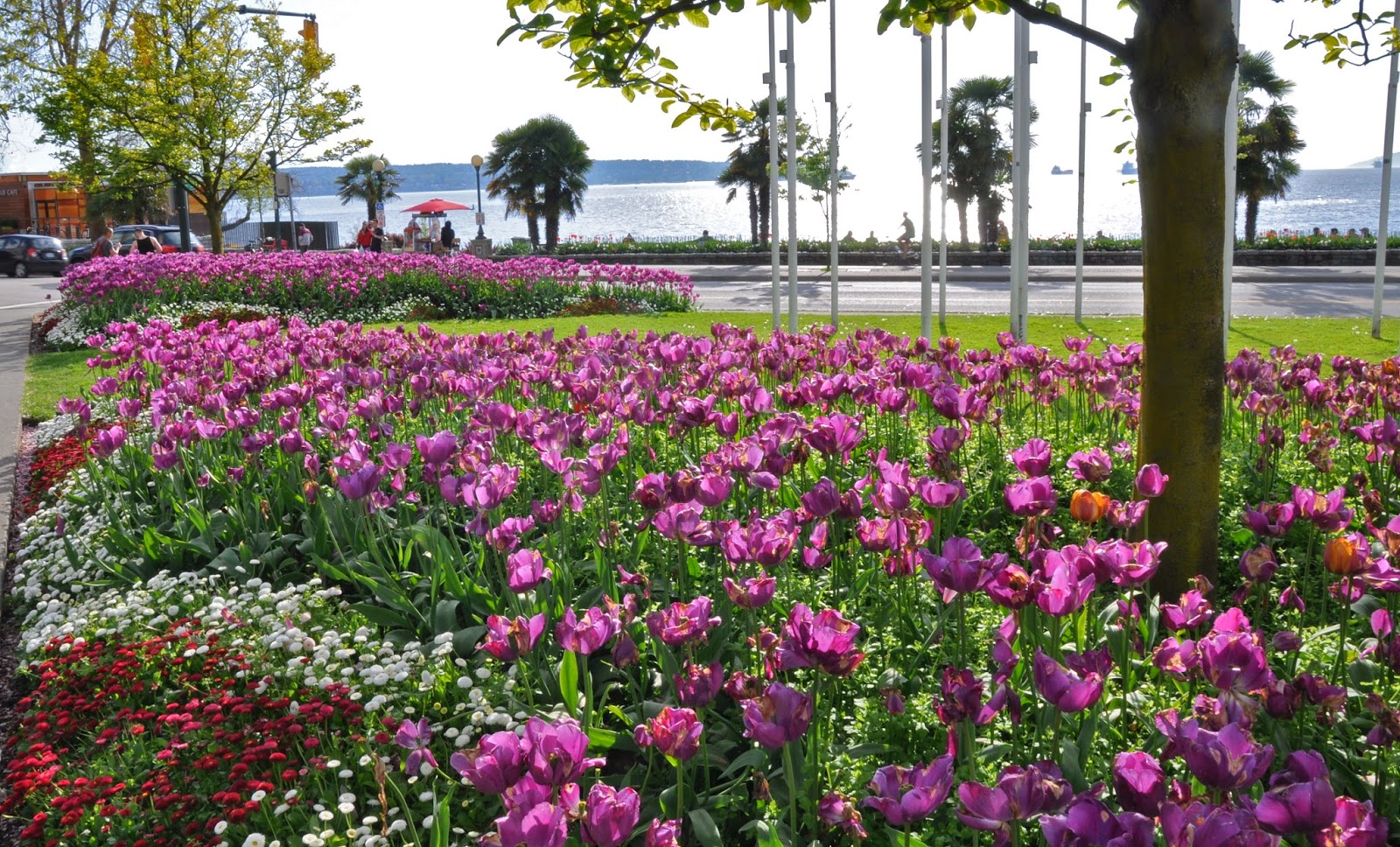 The Link Dance performance included six dances by various community groups, but the first, called Dancing the Parenting, was Bill's absolute favourite.  The music was composed and performed by Mark Haney, an excellent double bass player.  Perhaps, these photos.. 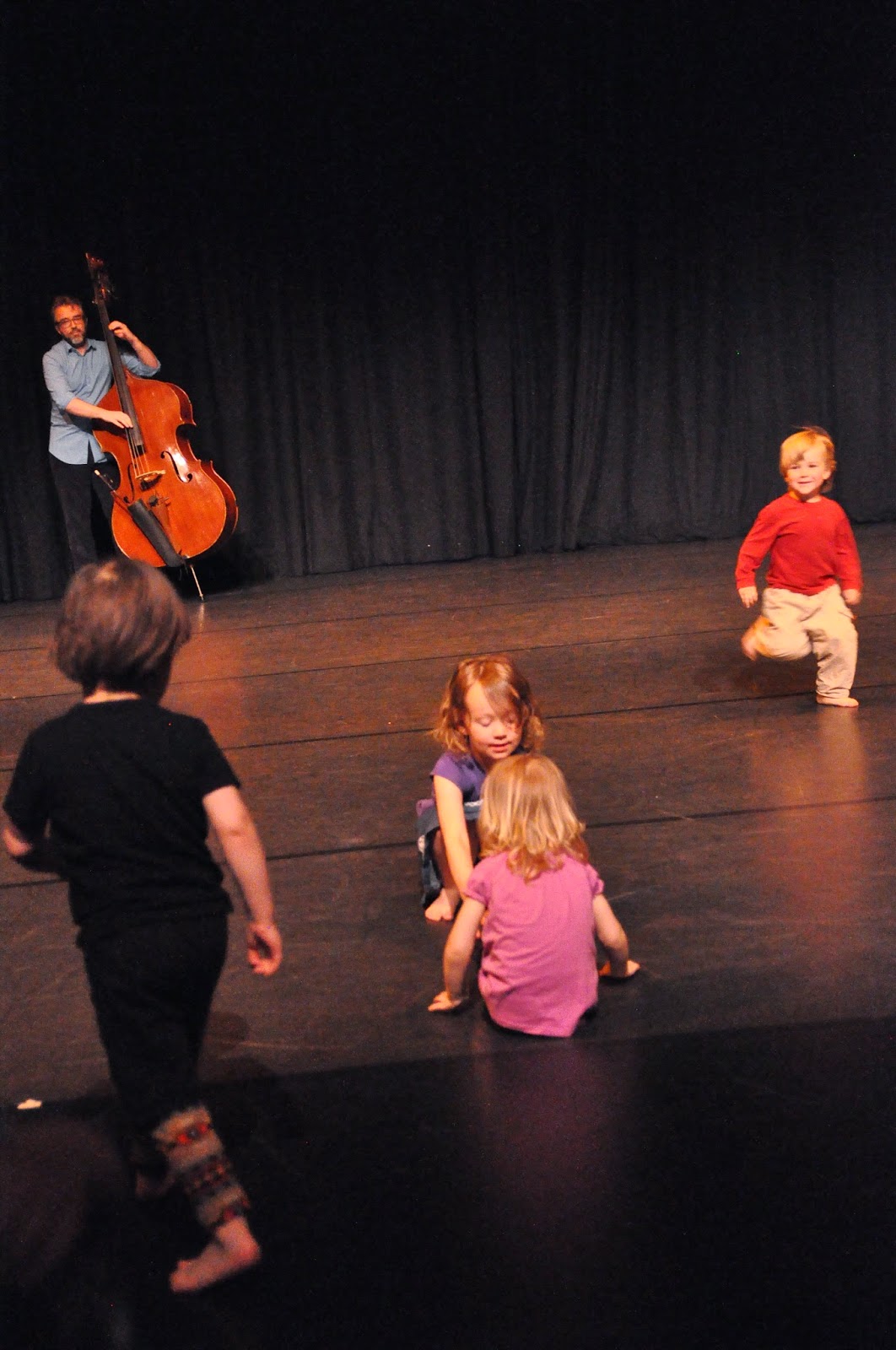 will speak for themselves.  No formality, lots of freedom of expression, and.. 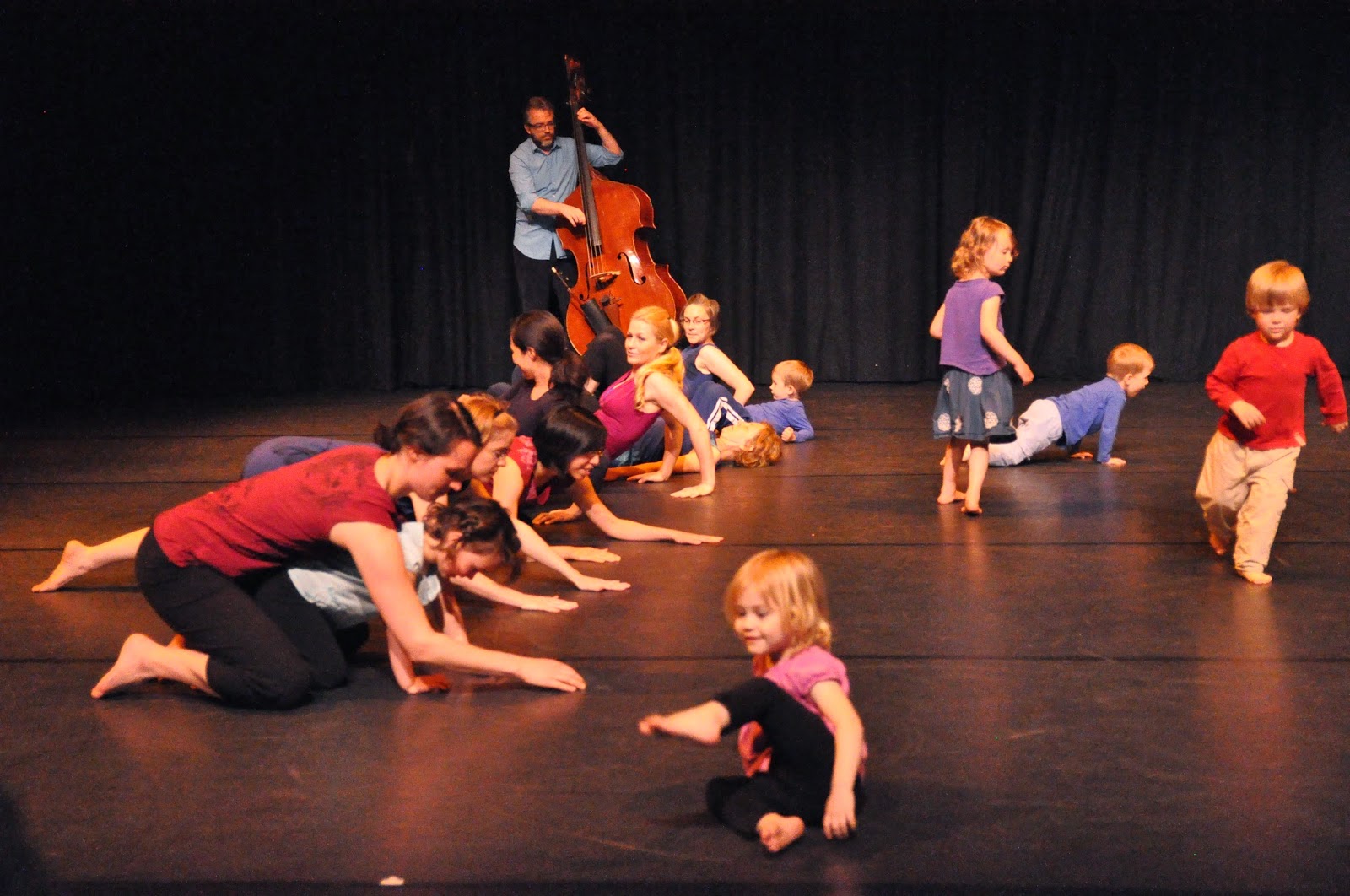 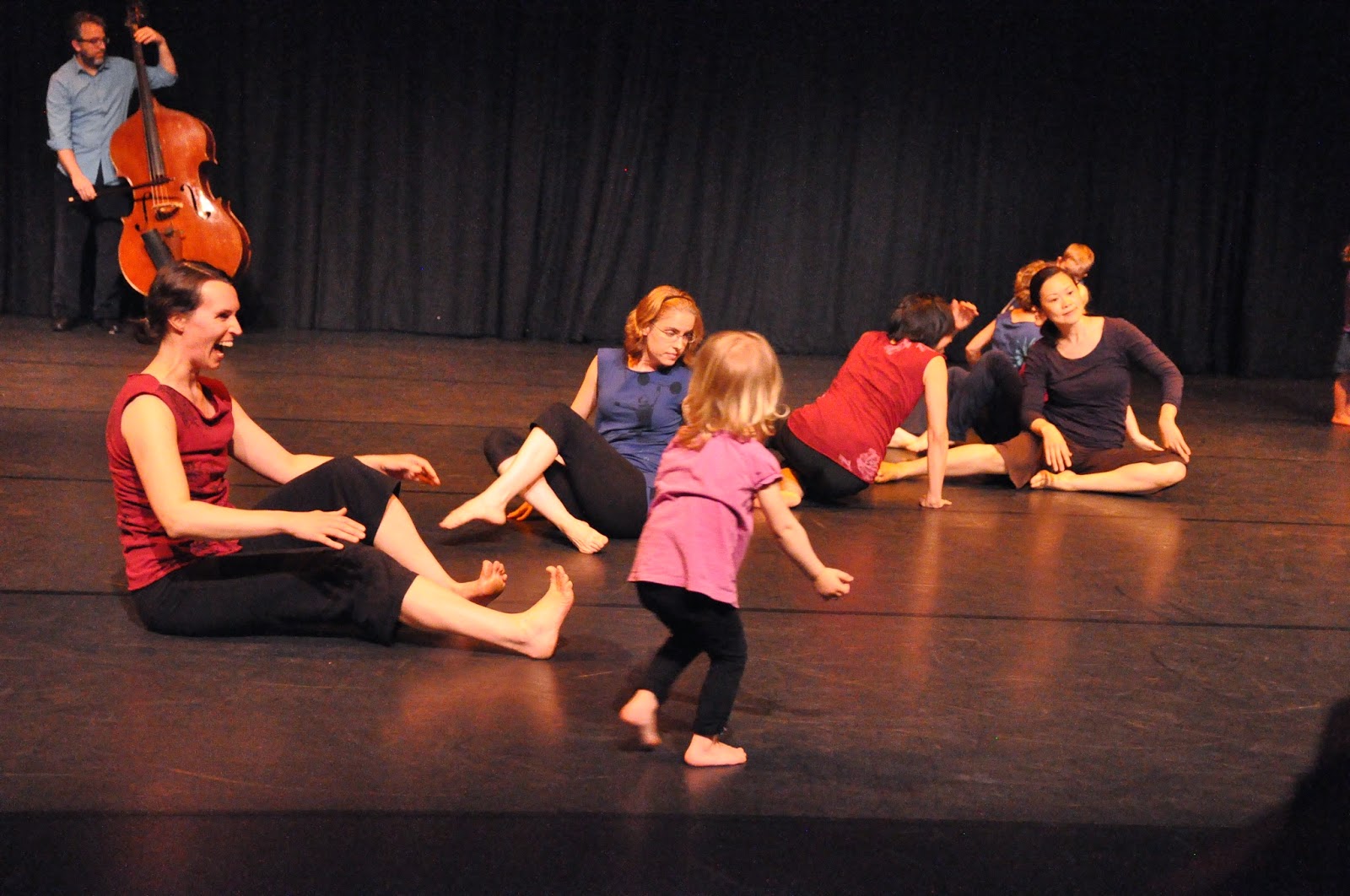 made this act a favourite with performers and audience alike.  Check out the twins here with their very energetic Mama!! 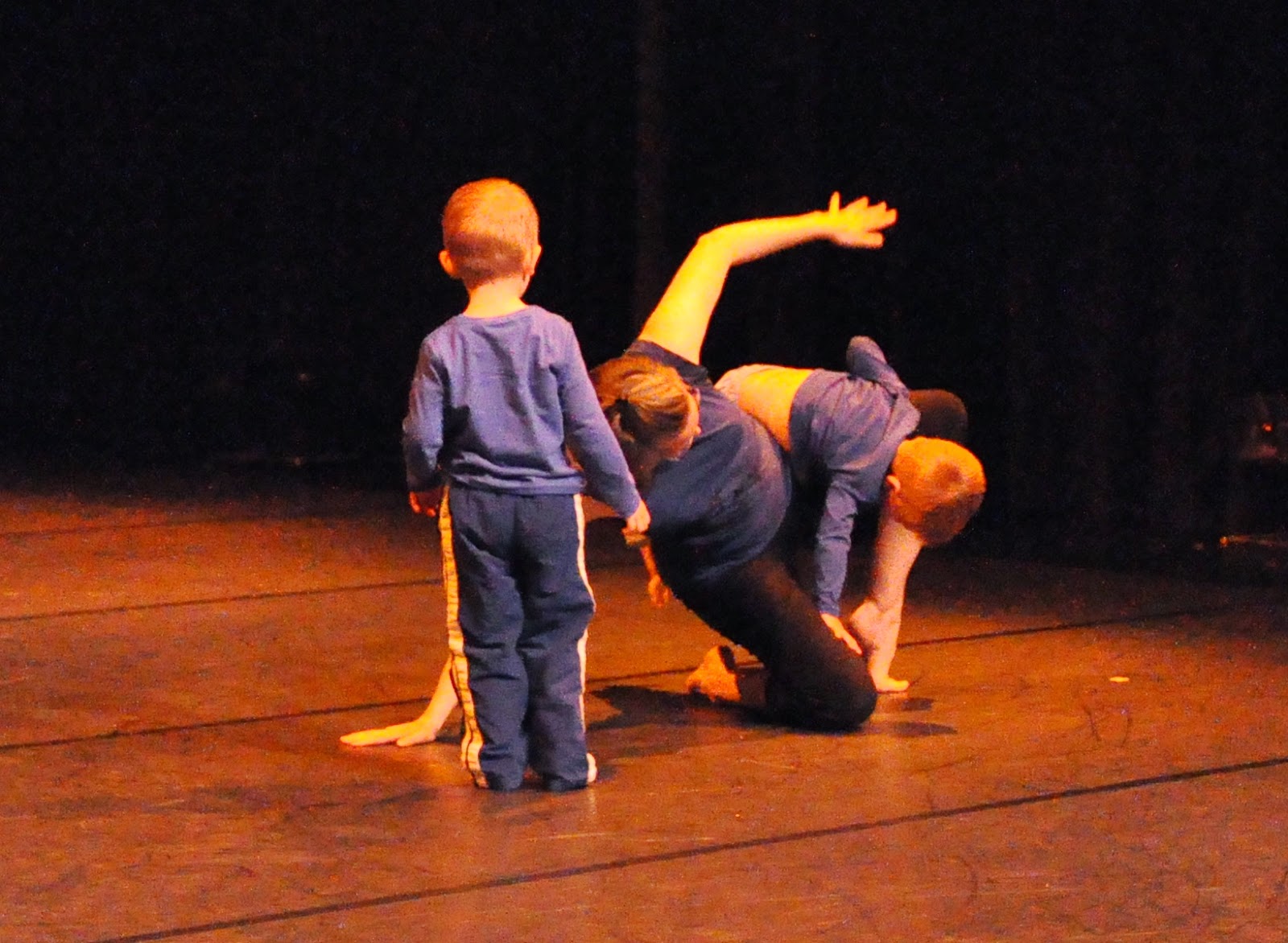 Self-expression was not quackled (suffocated) and those with a leaning to stardom were given lots of scope to realize their talents.  Emily admired spontaneity:  "... the first sketch done on the spot smacks of something bigger and more vital than the fixed-up product of the studio."  I think she would have loved this dance. 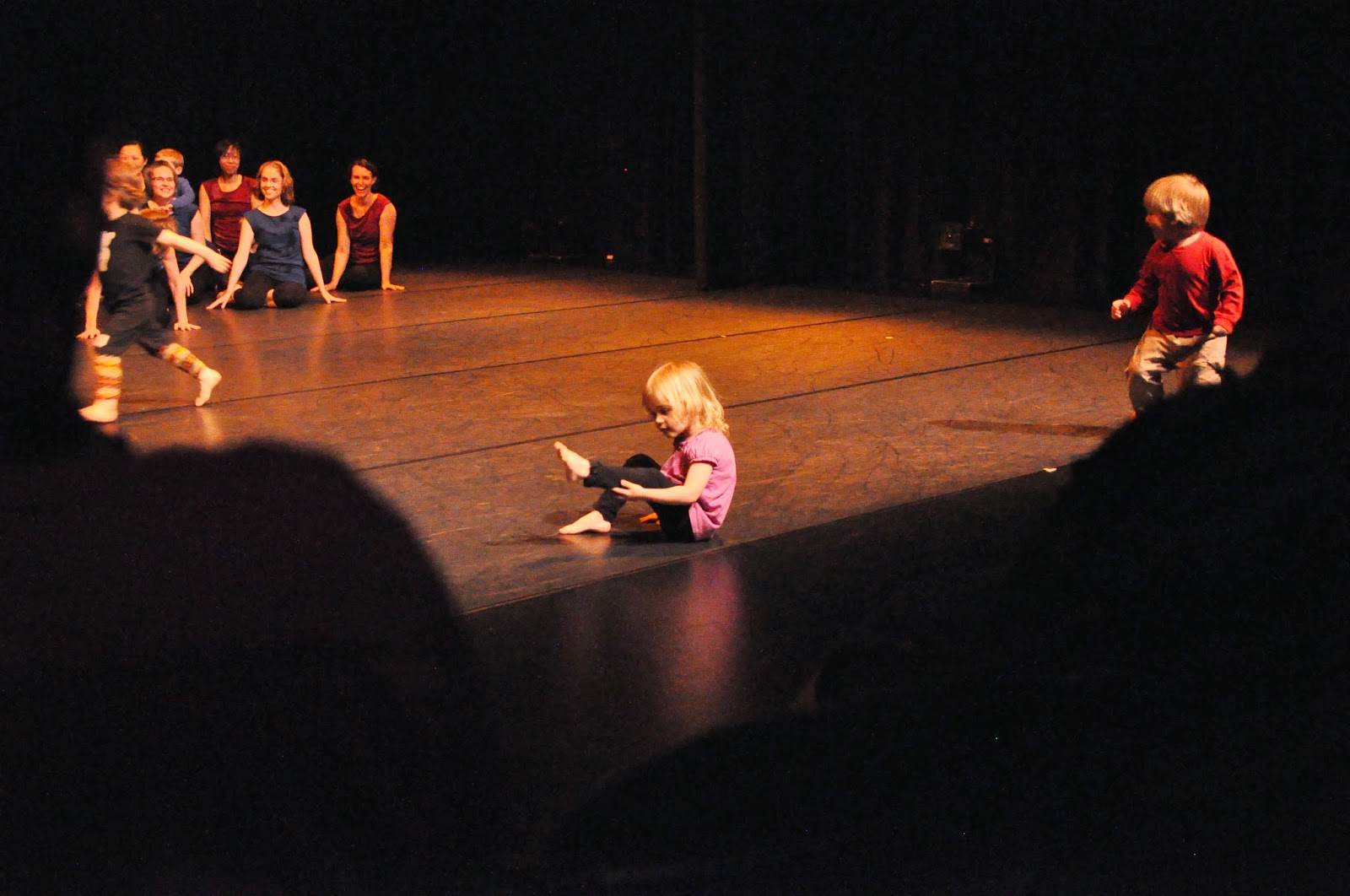 I wondered about the process of preparing for a public performance.  Whatever the approach, it seemed to me that the dance instructors had their priorities straight.  I saw no stress in the faces of the participants.  Emily's idea of good teaching was expressed in her opinion of Lawren Harris:  "He suggests - leaves you to ask questions if you are interested - answers them patiently and fully - then gives you, as it were, a gentle push-off and leaves you to think things out for yourself.  That's real teaching." 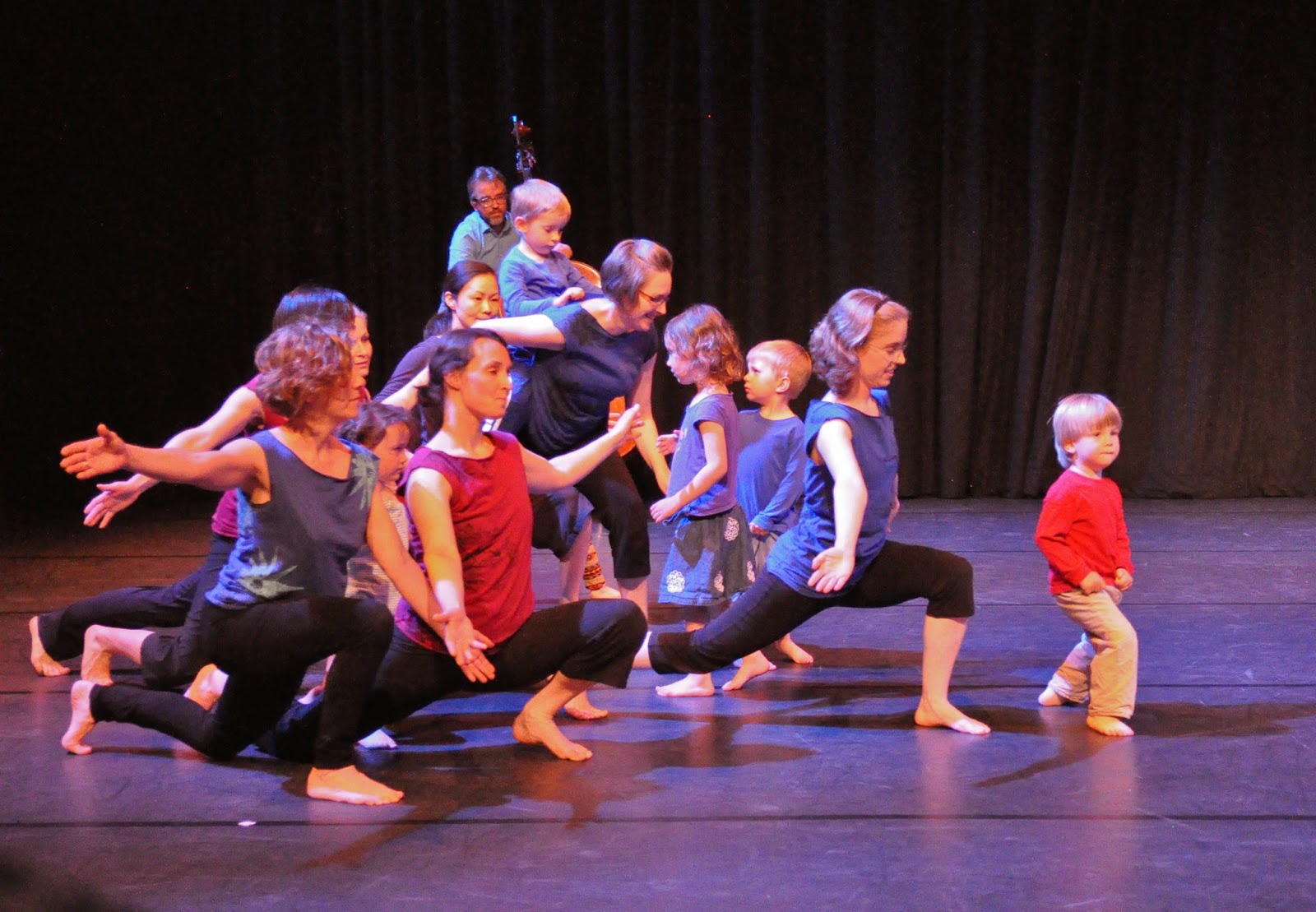 Below, the boy in red had a questioning expression.  I think he was trying to invite the boy in black to join their line.  The stance of the boy in black reminds me of the many instances when Emily found it more difficult than her sisters to conform.  She said at one point of her sisters:  "The girls heel better than I."  I think the dance instructors understood that an invitation from a peer would leave a much happier impression than pressure from adults to "heel" for the sake of a performance. 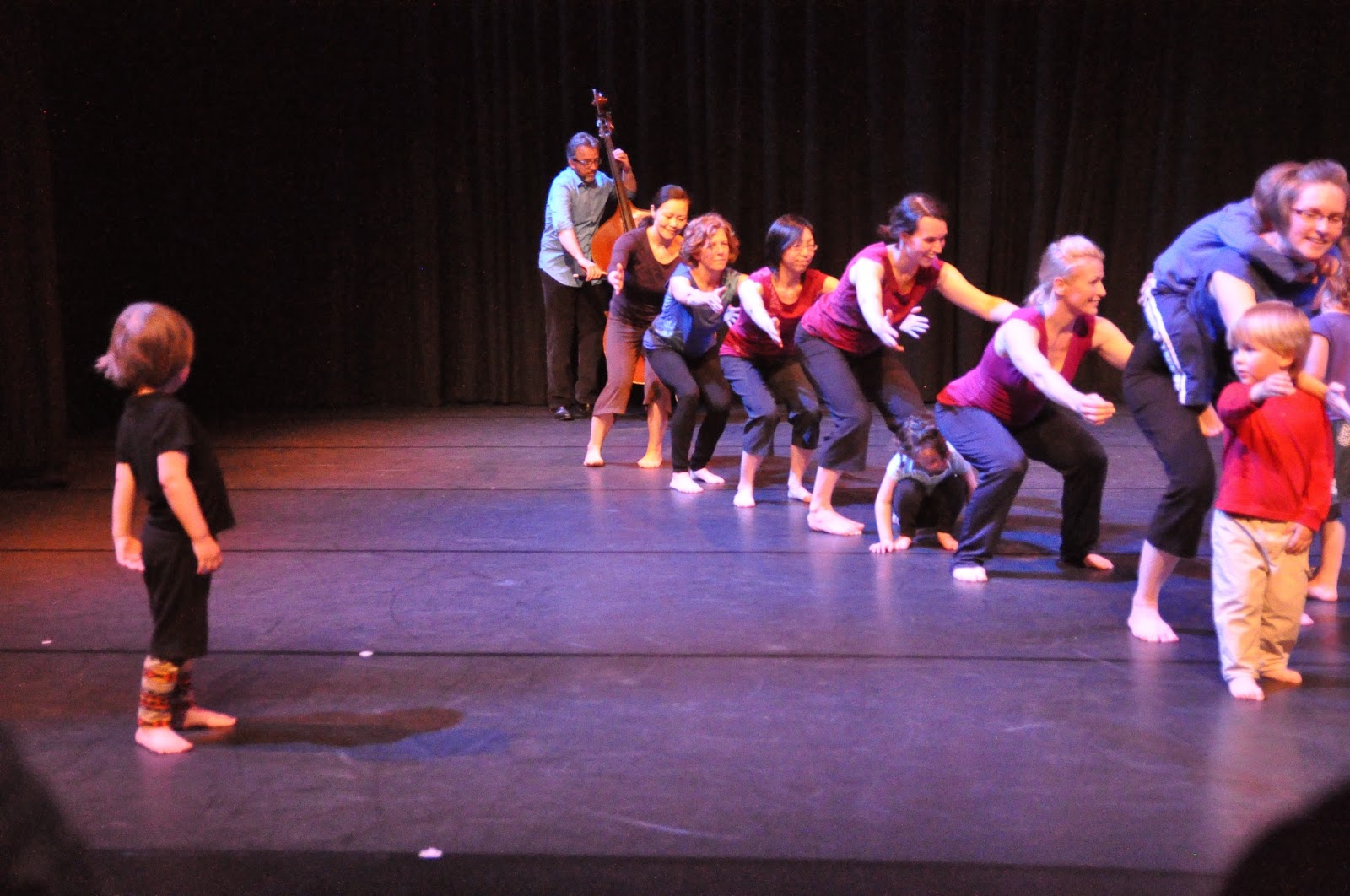 The bottom line?  Both little boys are delighted with their performance as are the parents and i think I can safely say, everyone in the audience. 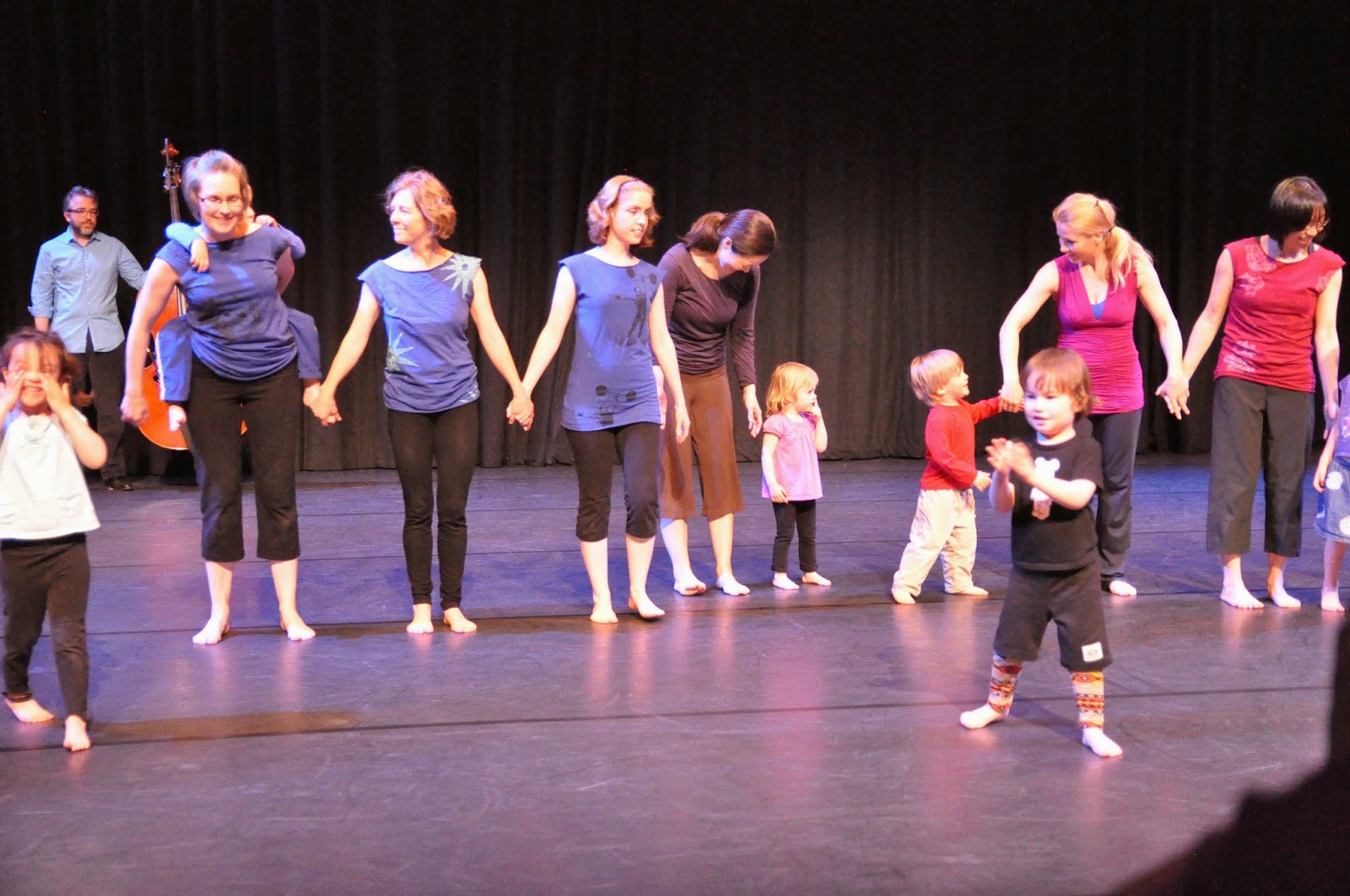 From toddlers to just a bit more senior, I think "quirky quality" was celebrated. The two dancers below performed "Uncharted" within an ensemble called Ageless Dancers.  Emily contradicts herself often (as she does on most things) when she talks of old age.  At one point, she says, "One slumps fearfully as one grows old. It is difficult to understand what one should give in to as belonging to one's years and what one should combat as lazy indulgence.  It is so easy to drift.  There should come a time for quiet meditation and pondering over things spiritual, but great care should be taken not to sit vacant."  At another point, she says, "I am not half as patient with old women now that I am one. I am impatient of their stupidity and their selfishness.  They want still to occupy the centre of the picture.They have had their day but they won't give place.  They grudge giving up." 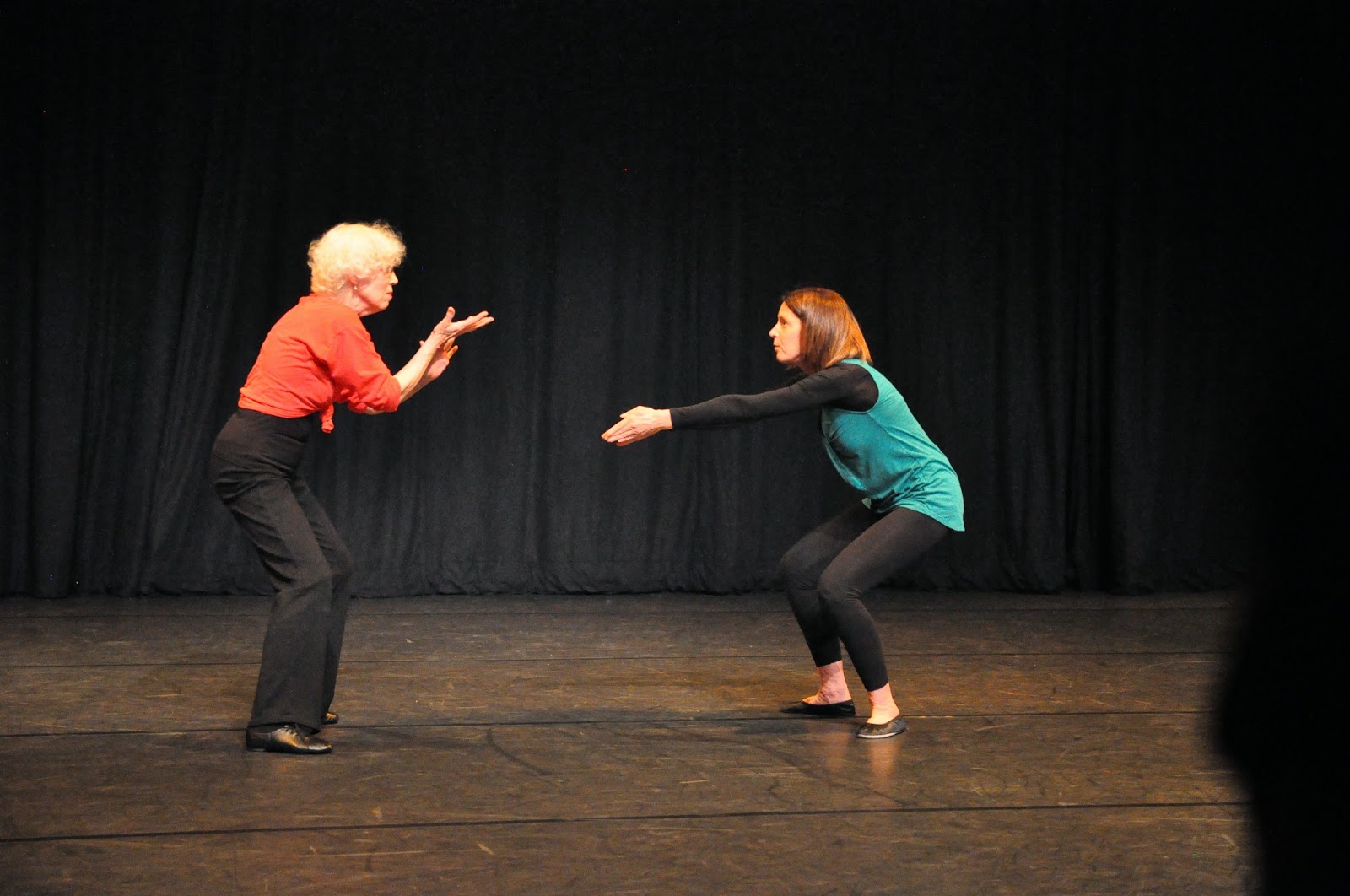 Well, Emily grudged giving up too.  She continued painting and writing after several heart attacks and a stroke.  Perhaps, her life and actions speak more truthfully than her words.  I was glad to see these dancers (though I don't think they were truthfully anything close to "old") expressing themselves with a vitality and fierceness but also with humour and fun that couldn't and wouldn't be denied. 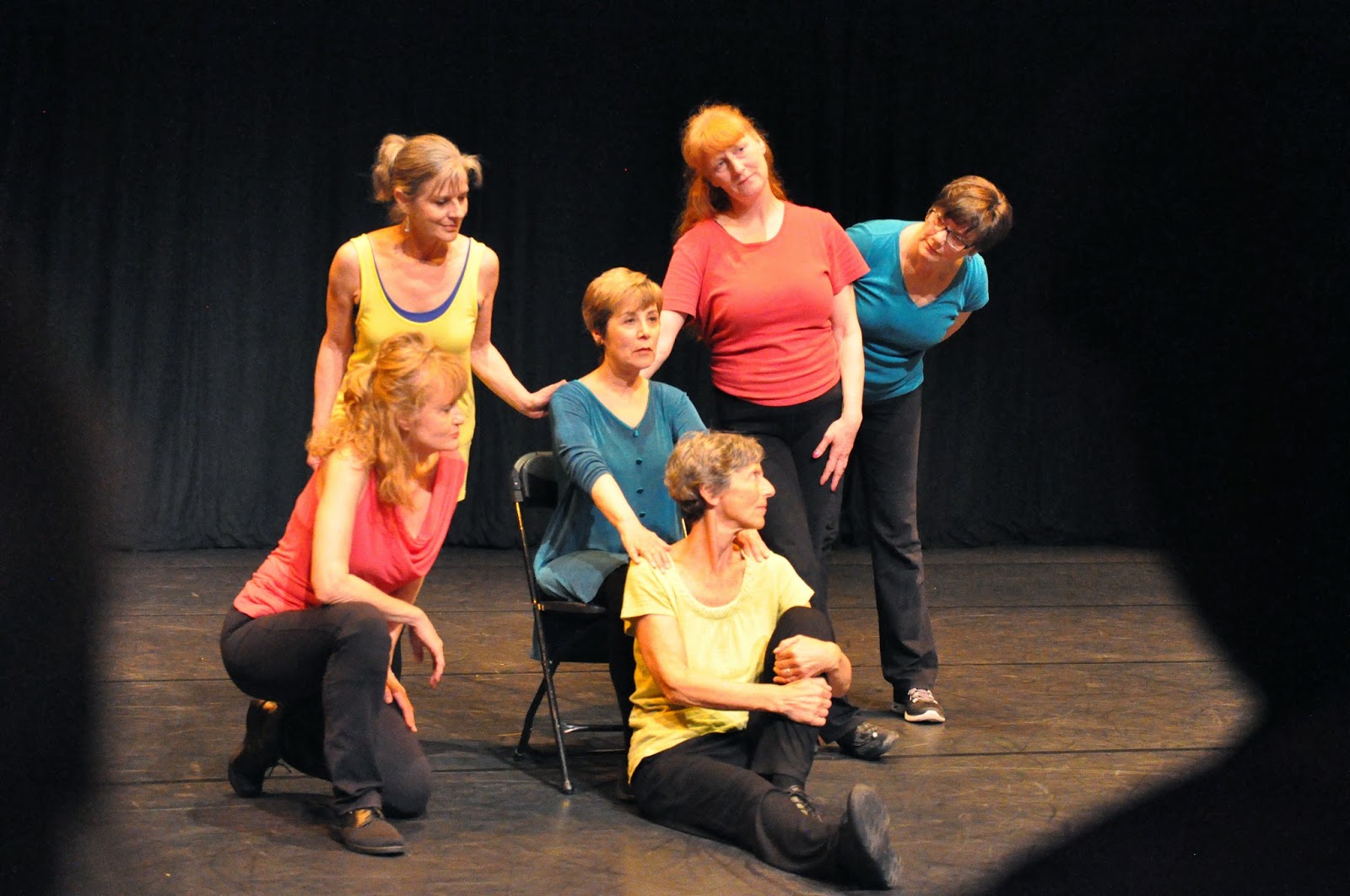 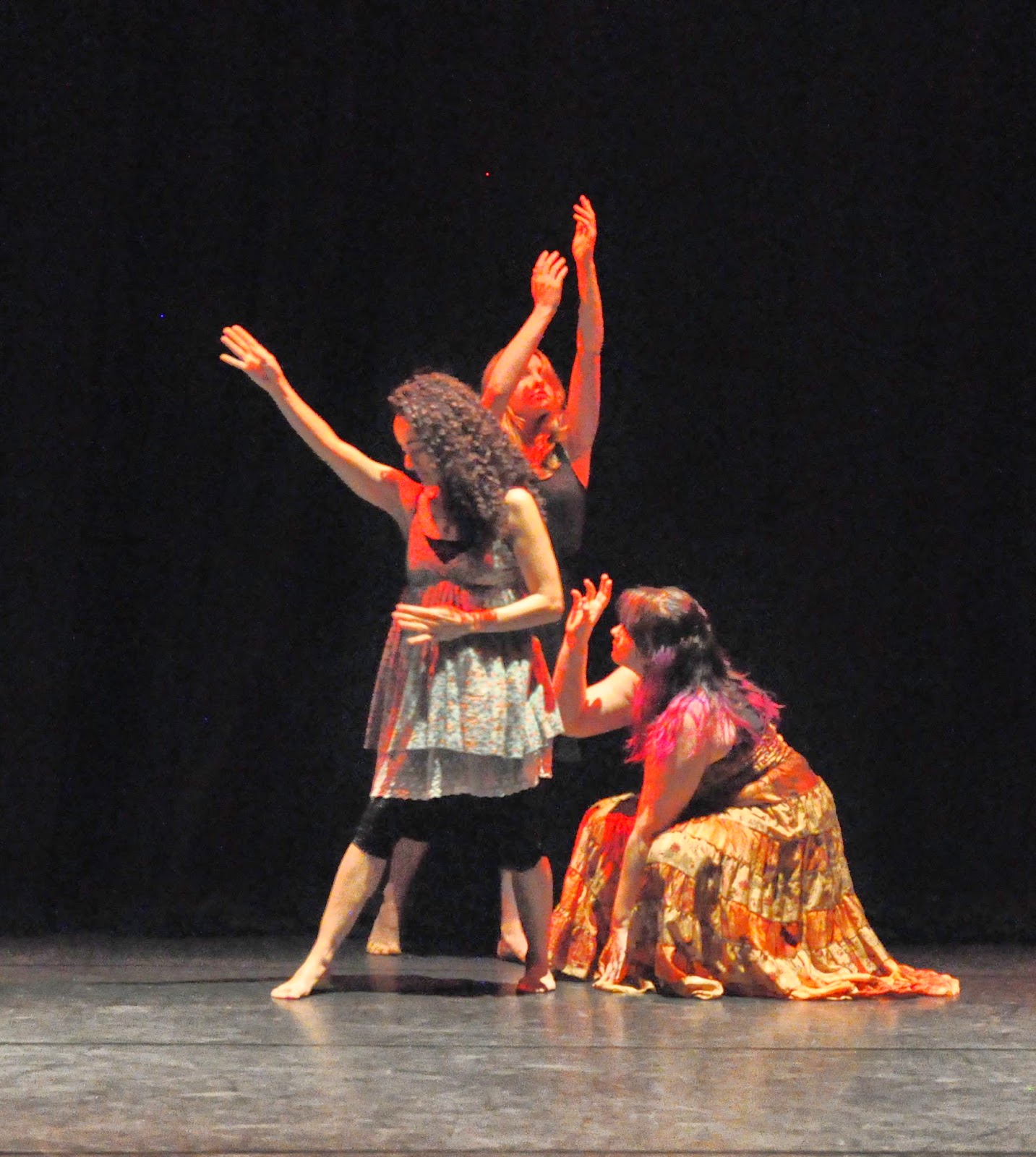 Jocelyn Cameron (below). I wasn't able to find a web site for Jocelyn but really loved the performance.  Adding live music for some of the performances was a quality decision for sure, though Bill and I agreed that the recorded music worked well too.  Of a contemporary piece of music played by the Hart House Quartet, Emily said, "Oh, it stirred deep.  Lovely music - rebellion, ferocity, tenderness, resignation - superbly played.  Our hostess did not like it, which was an amaze to me. Are people afraid to dip down and find out about life, I wonder? The man who wrote it and the men who interpret it have to dig and drink dregs to produce it.  It means some tearing of themselves, exhausting, searching, striving for ideals." 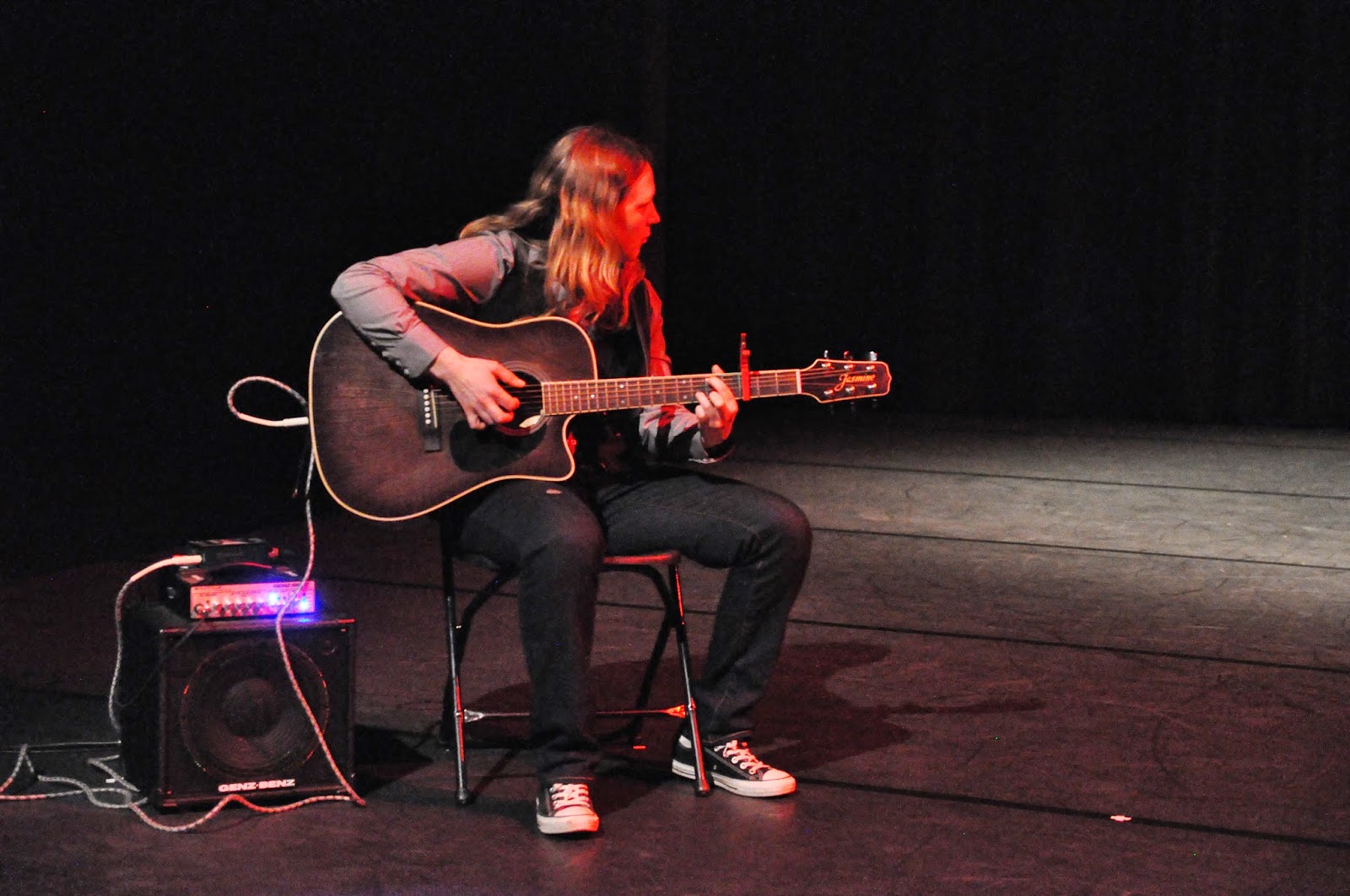 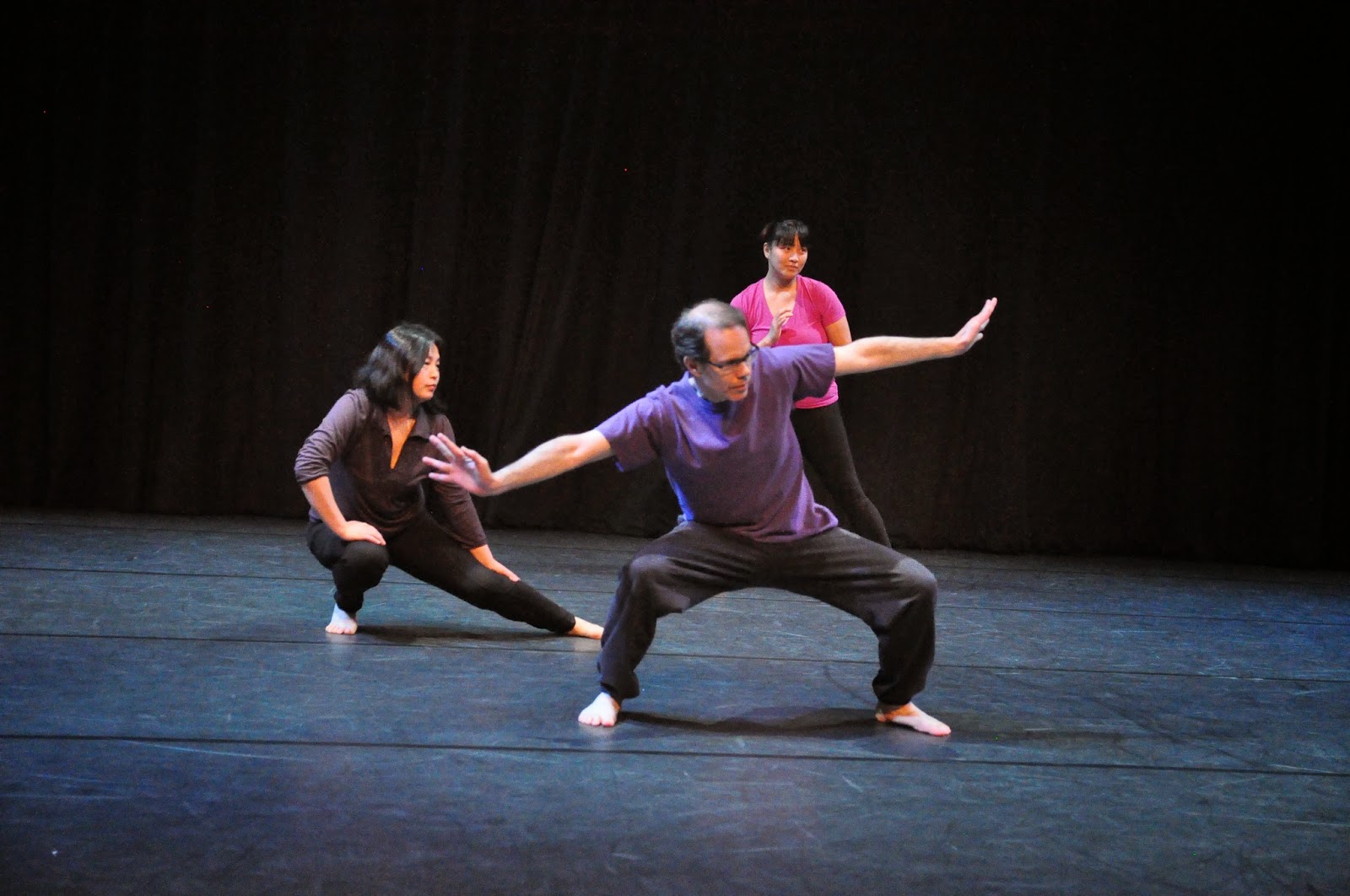 performed to a mix of music while their own narrated poetry spoke above the melodies, adding a dimension of meaning for me that brought the dance up close and personal. 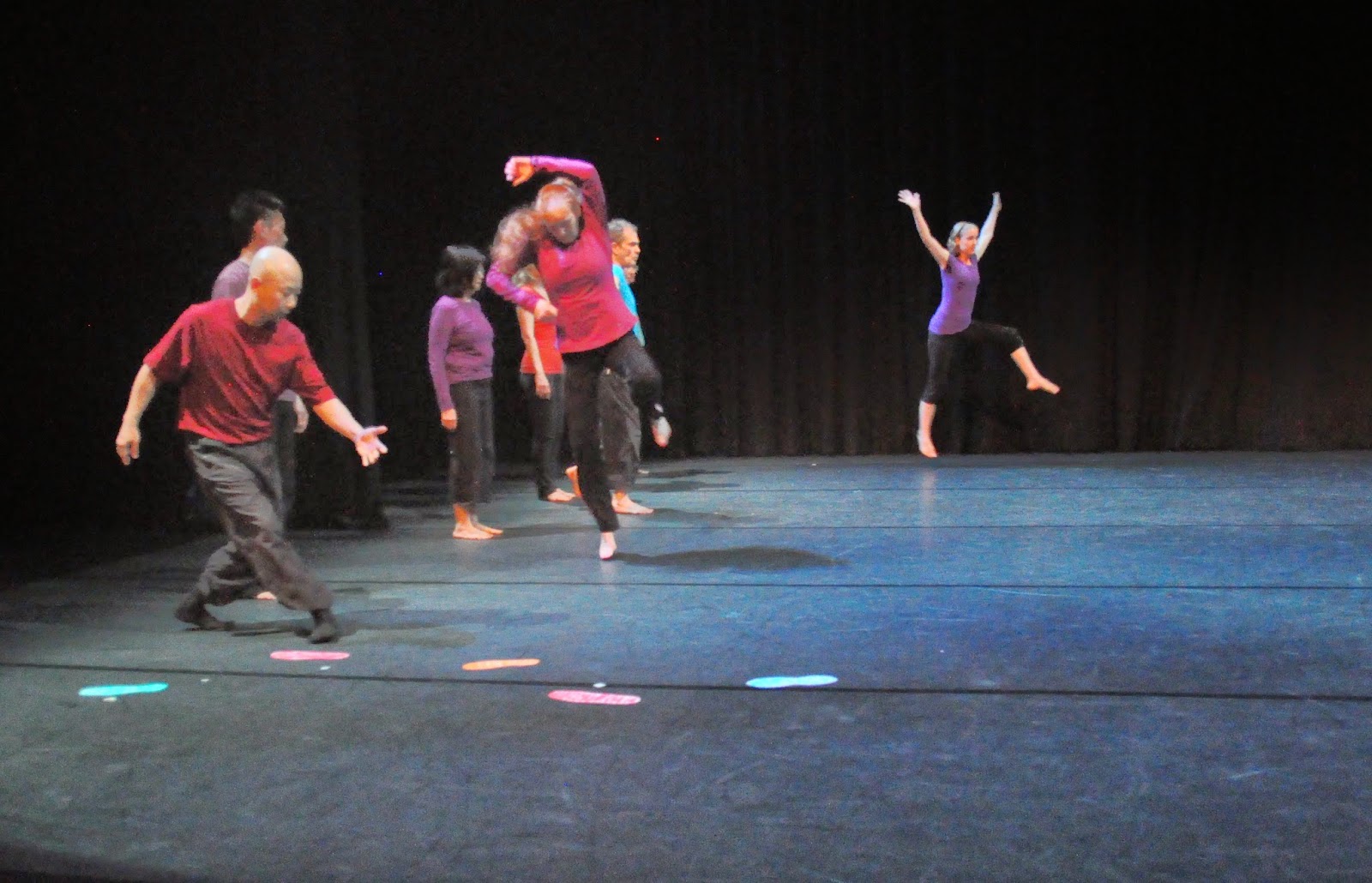 I was really touched by the honesty of the words, and yes, perhaps by individual quirks that flourished under gentle coaching. 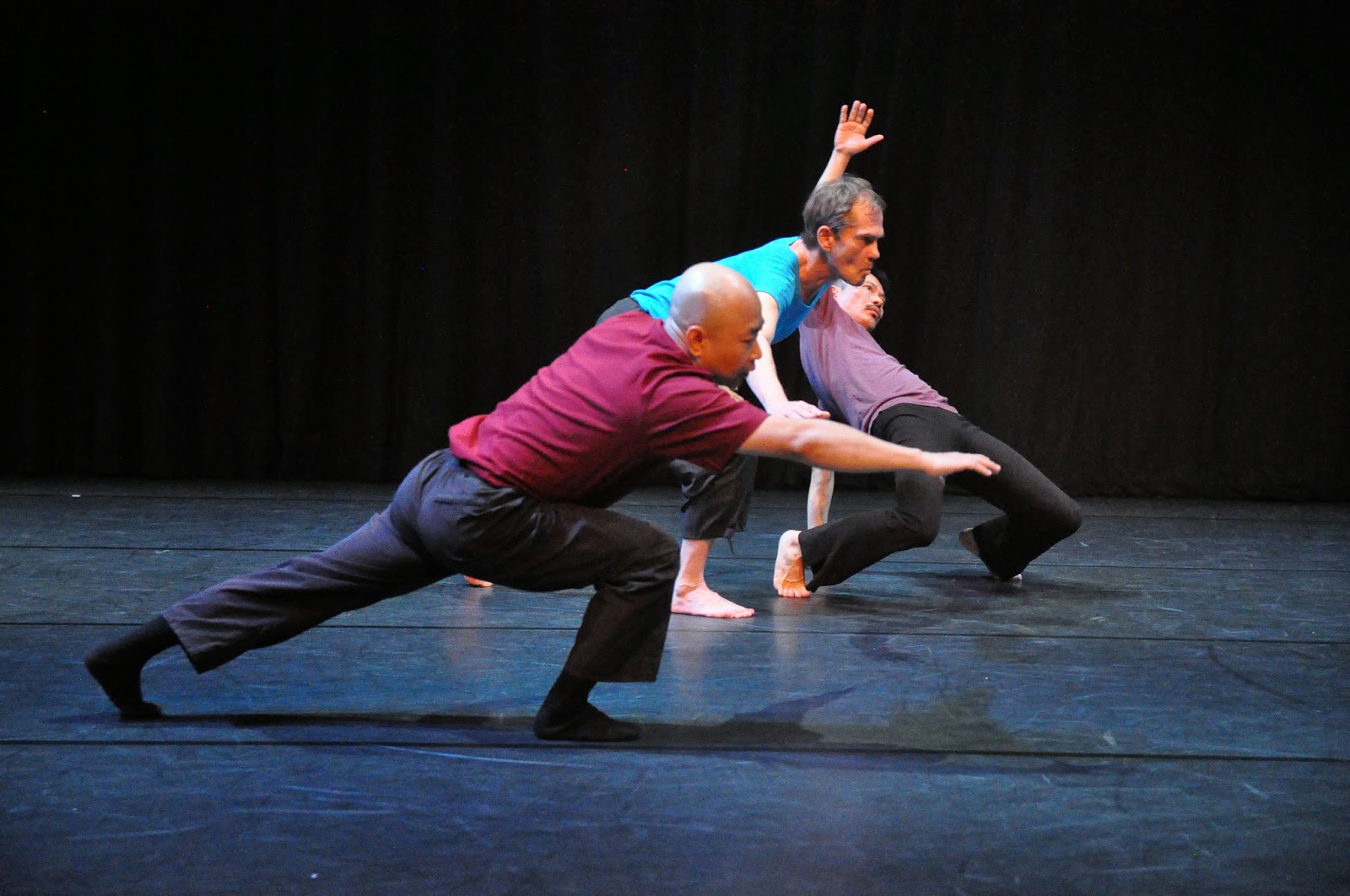 Can you feel their passion? The girl in purple almost seems that she will lift off. 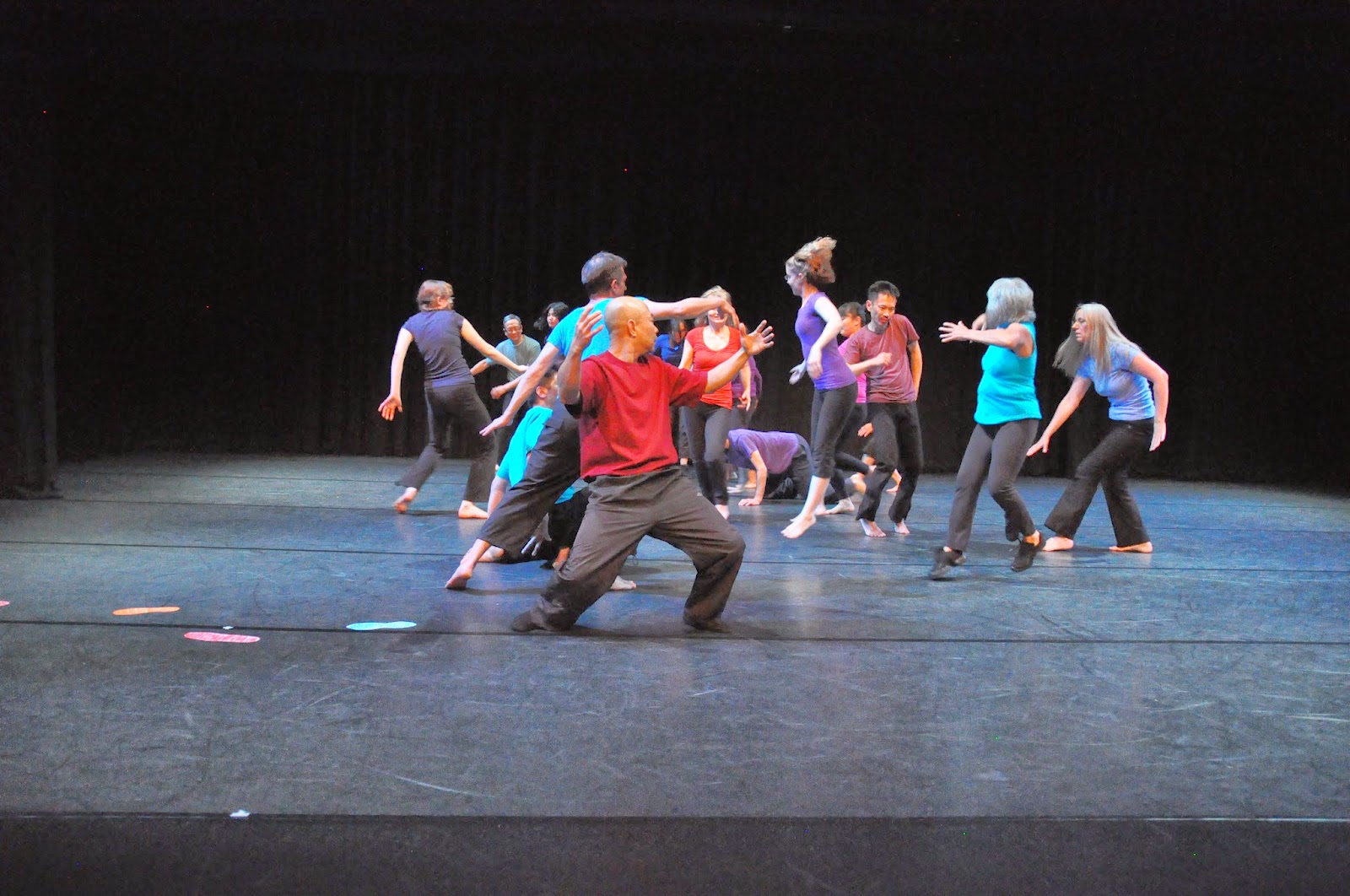 The Happy Dance (below) ended the evening; it was lighthearted and pure fun.  I almost felt I could lift from my seat and join them. 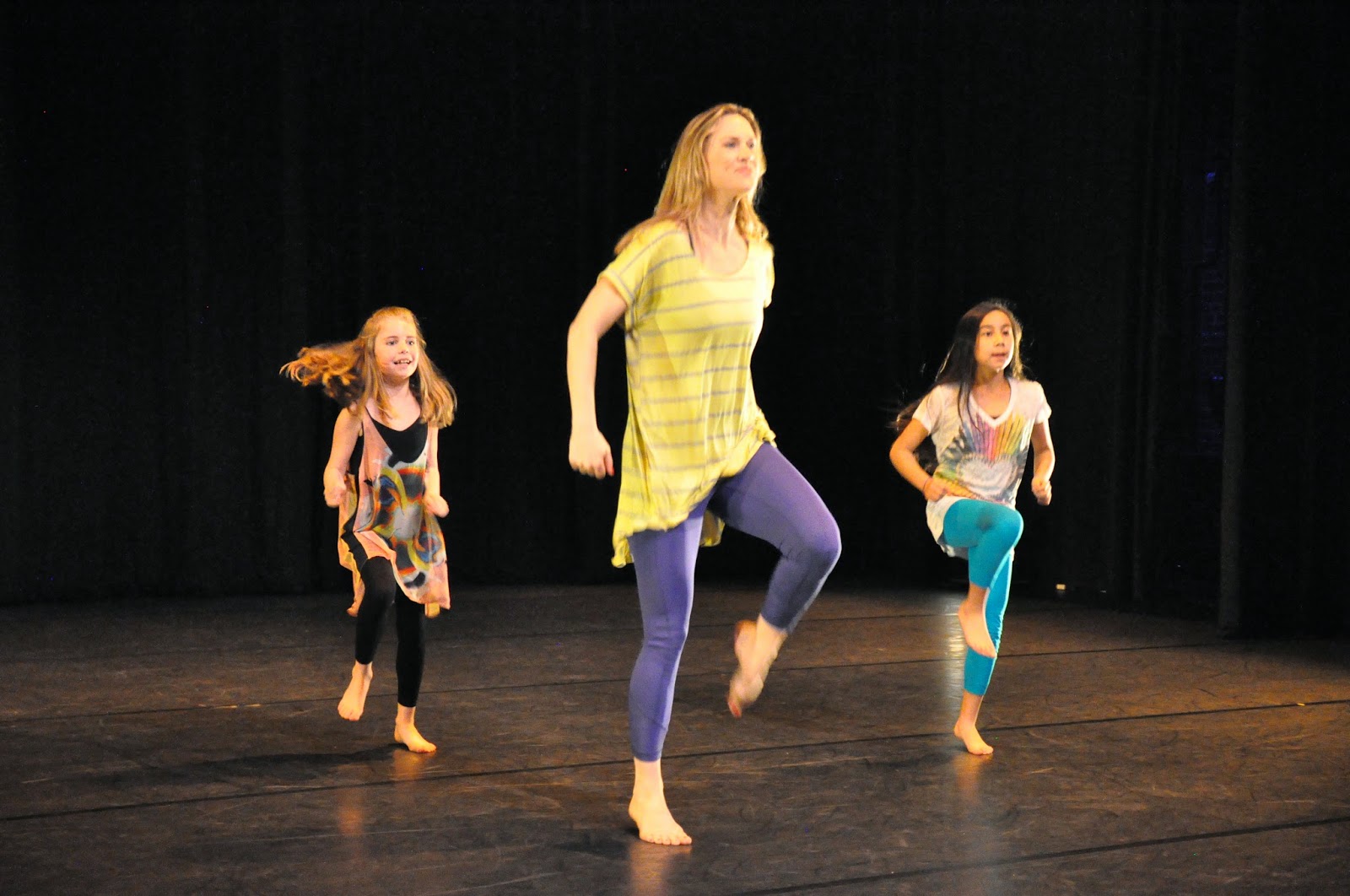 I'm having difficulty wrapping up this post.  Sometimes, a person's words, or music, or art, or dance reaches out from the grave and connects to the life all about me.  Emily's words and art do that.  Sharing her struggles and her joys was something that she did for herself, but along the way, she declared her humanness and left a legacy that gives me permission to accept my own quirks as long as I continue to reach out as she did, for as long as I am able.  It is now Thursday, but I will post to ABC Wednesday because the fine people who organize the meme keep it going for six days to accommodate a variety of agendas and quality quirks :)  I hope you will take a moment to check out at least a few "q" interpretations before you sign off.  Thank you for stopping by.  I do so appreciate the opportunity to share my thoughts.